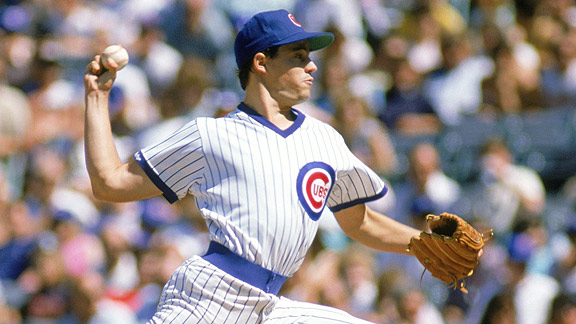 Maddux shuts down Sox in Game 1

Editor's note: Earlier this summer ESPNChicago.com asked users to select the All-Time Cubs team and the All-Time White Sox team. We are now simulating a series between the two teams, playing a game each weekday until a winner is decided.

The All-Time Cubs shut out the All-Time White Sox 7-0 in the opening game of ESPNChicago's seven-game simulation, but the matchup seemed more like one between Little Leaguers than Chicago baseball legends.

The teams combined for six errors: four by the Cubs and two by the Sox. But Cubs starter Greg Maddux, unlike Sox starter Mark Buehrle, was able to pitch around them.

Maddux threw a four-hit complete game shutout in 100 pitches. He struck out two but was wild by his standards, walking two batters, higher than his career average of 1.8 walks/nine innings.

Maddux's best work came in the sixth, when he got Eddie Collins to pop out to third after a Billy Williams error put runners at first and second. He also sidestepped an embarrassing combo of errors in the seventh, when five-time Gold Glove winner Ron Santo dropped a foul pop-up by Robin Ventura and then Ernie Banks committed an error on Ventura's ground ball. Maddux did not yell at or attack his teammates in the dugout at U.S. Cellular Field.

Buehrle also went tantrum-free but couldn't evade the Sox's defensive disaster in the fifth. With the Cubs already leading 2-0 on Mark Grace's third-inning homer, Buehrle allowed a one-out double to Andre Dawson. Nellie Fox committed an error that allowed Dawson to score and put Gabby Hartnett on second. After a Ryne Sandberg groundout -- which should have been the third out of the inning -- Grace doubled to left to score Hartnett and then scored himself on an error by Luke Appling. Three runs, all unearned.

Dawson, who led the Cubs with three hits, smacked a solo home run in the seventh to knock out Buehrle, who allowed six runs (three earned) in six innings. Ted Lyons relieved him and allowed one run in three innings.