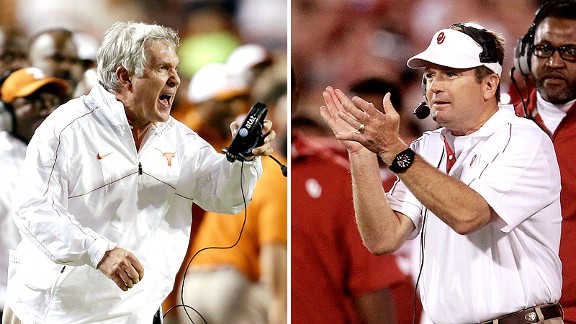 UT coach changed for the better

Let's get this out of the way right at the top: Bob Stoops has beaten Mack Brown. Repeatedly. The Texas coach's record stands at 5-8 against the Oklahoma coach.

If that is how you want to measure Brown or any coach -- by a slice of a career -- then go ahead and stop right there.

But that is not the myopic window to be looked through or slender yardstick to be held against Brown and his career at Texas.

Brown deserves a step back. A rational look with long stares left and right to the past and the future. His is a tenure that cannot be captured in 100 yards. It takes 40 acres and even beyond that to understand what Brown -- and his ability not just to coach but to build, manage and evolve -- has done for Texas.

By the numbers: Mack Brown

This was a program that had underachieved for more than two decades. Sure the logo was iconic. The university as a whole was healthy, one of the nation's largest. Harley Clark's hookems were welcome everywhere. And there were moments when Texas flashed to the surface -- Mackovic in '95, McWilliams in '90, Akers in '77 and '83.

What Brown did was make sure Texas endured. He rebuilt the foundation of the program that had been first poured by Darrell Royal. He did it with those who had already invested in the program, players, boosters, fans and Royal at his side. What Brown did was understand there was an inherent pride to being a Texan and being a part of the state's university. That he understood this as an outsider from Cookeville, Tenn. speaks to his acumen to realize Texas is more than just about one man on one sideline in one game a year.

Yes, it is and was Brown's job to coach on that sideline. But he, much better than his predecessors, realized his job was to coach and harness the passion of Texas as well. This was where the untapped resources of the state were. That Brown had the charisma, foresight and selflessness to give the football program back to the people has allowed him to build a brand that not just succeeds on the football field but has succeeding in becoming the most valuable in all of college sports.

That there have been wins, so many wins, along the way speaks to his ability to coach but also manage, both qualities essential to success but not always present in college football.

If Brown, his qualities and his program stopped there, it is a career that would be considered by an unqualified success by any measure. But that Brown's career hasn't always been a success has allowed for everyone to view what might be most uncelebrated but critical piece to Brown's leadership abilities.

What Brown showed in the wake of 2010 was a willingness, after 12 years of unparalleled success, to change. Maybe, the cynic might say, self preservation was a motivating factor. But Brown had the cache, and quite frankly the cash, not to worry about the future.

What he also had was the self-awareness to understand he had to put his ego aside and do what was best for the program. That type of introspection and quick reaction is void in much of the business world. That was not the case with Texas' CEO.

Brown was willing to change who he was and how he did things to better the program.

Now the program is better for it, as it always has been with Mack Brown in charge of it.

When comparing Bob Stoops to Mack Brown, the numbers tell most of the story.

Stoops has eight wins over Brown; Brown has just five victories over Stoops. Stoops has won seven Big 12 championships; Brown, just two. Both coaches have each won a national title. But Stoops has been to the big bowl four times -- two more than his Texas counterpart.

But coaches should be celebrated for reviving sleeping monsters. The Longhorns were coming off a losing season when Brown took over in 1998. After a rocky first couple of games, he immediately turned the Longhorns around as they went 9-3 and beat Mississippi State in the Cotton Bowl.

By the numbers: Bob Stoops

Stoops' resurrection project, however, was far more impressive. The Sooners were in greater disarray following the dark years of Howard Schellenberger and John Blake. OU went 7-5 in Stoops' first year, then captured the 2000 national championship with an undefeated season in his second. Along the way, the Sooners hammered Texas 63-14, which wouldn't even be OU's largest margin of victory over Texas in the Stoops era. Three years later, OU trounced Texas again, 65-13.

But underlining OU's collective recent dominance of the series, Stoops' Sooners have averaged 30.6 points in the Cotton Bowl in 13 meetings. Brown's Longhorns have averaged 21.8 points.

Stoops has endured his share of struggles over the years. After back-to-back national championship appearances, the Sooners went just 8-4 in 2005. After injuries to Heisman Trophy quarterback Sam Bradford and All-American tight end Jermaine Gresham, OU sputtered to an 8-5 record in 2009.

And then in 2011, the Sooners cratered at the end of the season following road losses to Baylor and Oklahoma State. But even that season underscores Stoops' consistently. By all accounts, the Sooners had a disastrous season. And yet, OU still won nine games, which included a 38-point rout of the Longhorns. When the Sooners have dipped, they haven't dipped nearly as far as Texas has. The Longhorns haven't won eight games the last two seasons. OU hasn't won fewer than eight since Stoops' first season 13 years ago.

No one can argue that Texas has more to work with. The homegrown recruiting talent overflows. Texas has its own 24-hour network and more money than it can count. And yet, the Longhorns haven't been able to quite match OU's success under Stoops.

Brown still remains one of the best coaches in the country, and is one of the foundational coaches of the program along with Dana Bible and Darrell Royal. He just can't quite top Stoops.