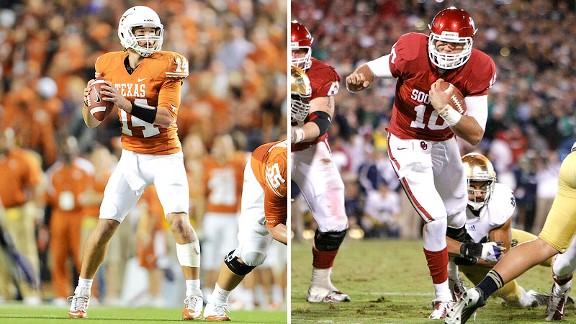 If this were a battle rap, in which it's popular to call your opponent out on the material they are about to recite, my colleague Jake Trotter would be wise to wax poetic about how my argument is going to be centered around Oklahoma quarterback Blake Bell's throwing ability. Namely, can Bell throw effectively?

It might be a ho-hum argument -- one that has grown tiresome in Sooners country -- but it has followed around Bell this spring for a reason. His career passing numbers at OU: 10-of-20 for 115 yards and one interception.

Look, I don't doubt for a second that the velocity of Bell's right arm is like that of a fire hose. There's a reason the Detroit Tigers took him in the 43rd round of the MLB draft three years ago, even though he didn't play baseball.

I don't even doubt that Bell can throw a football through a brick wall. His arm was the main reason the Sooners recruited him so heavily in 2010.

But it has been several years since his game reflected those throwing abilities. I'd like to see results first -- not the 14-of-23 for 213 yards and two touchdowns in the Sooners' spring game, though impressive -- before I anoint him as a better quarterback than someone who has already taken his lumps.

In his career, Texas quarterback David Ash has completed 64 percent of his passes for 3,778 yards and 23 touchdowns (although the 16 interceptions aren't pretty). He'll also have the best supporting cast any Longhorns quarterback has had since the 2005 national championship team.

Just look at what Ash has to work with. He has his entire offensive line back, not to mention 6-foot-8 juco transfer Desmond Harrison, who should transition smoothly at left tackle. He has his top two wide receivers back from 2012 in Mike Davis and Jaxon Shipley, and a bevy of other speedy weapons (Daje Johnson and Duke Thomas, to name a few). Plus he has the luxury of handing off to one of the top backfields in the country.

By the numbers: QB David Ash

Not only does their return instantly make Ash a better quarterback, but the move to more of an up-tempo offense with Major Applewhite calling the shots should allow the junior signal-caller to flourish.

One area where Ash should vastly improve is with his feet. Applewhite wants Ash to run more when the opportunity presents itself. He ran a season-high seven times in the Alamo Bowl victory over Oregon State, which included an 11-yard score.

I'm not saying Ash is the second coming of, dare I say, the Belldozer with his running abilities. But I am saying that added dimension will make him increasingly more dangerous.

Ash should also play more relaxed knowing that he's the unquestioned quarterback of the team, which Mack Brown anointed him heading into spring practice. That's more than Bell can say for the moment, and something Bell could struggle to maintain if he can't lead OU through a daunting first half of the season.

That said, give me the quarterback who has at least thrown a touchdown pass in college.

We all know Bell can throw. But he's not in Kansas anymore. He must prove it in 2013.

I confess, I don't know how effective a quarterback Oklahoma's Blake Bell will be this season. I'm not sure anyone does. He might be the Tim Tebow of the 2013 season. He might lose his job to Kendal Thompson or Trevor Knight before October.

Even still, I'd rather roll into the Cotton Bowl with the unknown of Bell versus the known of Texas quarterback David Ash. Because what we know about Ash when it comes to the Red River Rivalry, well, it hasn't been pretty.

Sure, the most experienced Big 12 quarterback has had his moments. The game-winning drive in Stillwater. The fourth-quarter comeback in the Alamo Bowl.

But Ash has also folded against the pressure of quarterbacking in the Red River Rivalry. Twice. Completely and utterly.

The OU-Texas series (or the Texas-OU series, for those reading from south of the Red River) has been defined, historically, by quarterback play. The team with the steadier quarterback has usually won. This has been so from Bobby Layne to Steve Davis; from Peter Gardere to Jason White.

William has countered that Bell's unproven passing ability should render Ash the de facto pick, which, of course, is flawed logic. Just because Bell has proved he can run doesn't necessarily mean he can't throw.

Bell was ranked the No. 3 quarterback recruit in the country in 2010 (Ash was No. 11 the following year, by the way) because of his passing. Bell, in fact, rarely carried the ball in high school until the playoffs of his senior year. Well before then, schools like Notre Dame, Georgia and Miami had offered scholarships on the merits of Bell's arm. That should tell you something.

This doesn't guarantee Bell will succeed as a passer. But it offers compelling evidence that he very well could.

By the numbers: QB Blake Bell

William also touts Ash's supporting cast. And yes, the Longhorns have their best collection of skill players since the Jordan Shipley days. But Bell's supporting cast is just as good, something Texas fans should know well. After all, tailback Damien Williams, who set the OU-Texas record for longest run last year, is back to anchor a prolific backfield that also includes fullback Trey Millard, who in the same game set the record for the longest OU-Texas reception. Bell will also have Jalen Saunders, who figures to be one of the three best receivers in the Big 12.

This debate, however, really isn't about which team has the better supporting cast or the unknown of Bell's throwing aptitude. This debate, ultimately, is about Ash -- underscored by the fact that we're actually comparing a maiden starting quarterback to one with 18 starts and 25 games played.

With four interceptions and a woeful completion percentage, Ash has been awful in two tries against the Sooners, who, as a result, have effectively ended both contests before halftime.

We don't know yet what kind of quarterback Bell will be. We don't even know for sure he'll be OU's quarterback on Oct. 12. But nothing Ash has done in the OU-Texas series evokes much confidence. Which is why I'll take the unknown.