05/07/12
11:49
AM ET
By Jeremy Mills
Conference races are entering the home stretch, so let's take a look at the leagues currently projected to send a single team to the NCAA tournament.

Four teams are within three games of the top spot in the Atlantic Sun. Belmont started the season hot, but lost its last three conference series. Stetson has the best RPI, and a chance for an at-large bid, but hasn't beaten a Top-50 RPI team. South Carolina-Upstate is in first, with a chance to earn a regional bid in its first year of Division I eligibility.

A recent eight-game win streak by Coastal Carolina elevated the Chanticleers to their normal spot atop the conference. Campbell, Liberty and Radford all have RPIs in the top 100, but their overall résumés suggest they need to win the conference tournament to steal a bid. 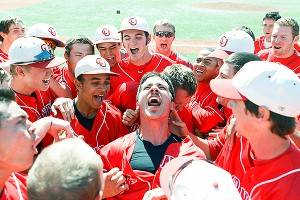 Courtesy of Cornell Athletic CommunicationsCornell became the first team to book its ticket to the NCAA tournament after claiming the Ivy League title.

The most surprising name on the single-bid conference list is the Big West. If current leader Cal State Fullerton wins the conference, then the Big West could earn a single bid. The Big West has sent just two teams to regionals the past two years after sending four in 2007 and 2008. Long Beach State and UC Irvine are both on the wrong side of the bubble; Irvine lost its series against Fullerton, while the Dirtbags finish the season hosting the Titans.

UNC Wilmington has a three-game lead in the Colonial and hasn't lost a conference series all season. The conference tournament is at defending champion James Madison, but at this point the Dukes wouldn't even qualify for the six-team field.

As a newly formed conference, the Great West does not receive an automatic bid to the NCAA tournament. That means that Utah Valley and its current 28-game winning streak might not even make the field of 64. The Wolverines have moved into at-large consideration, but with 27 of their 35 wins (and eight of their remaining nine games) against teams in the bottom 100 of RPI, it's still a long shot.

Valparaiso took two out of three games over the weekend at Wright State to hand the Raiders their first conference series loss and tie the Raiders atop the standings. The next closest team is 4½ games back.

Cornell got a walk-off 11th-inning home run from Chris Cruz to beat Dartmouth and reach the NCAA tournament for the first time since 1977. The Big Red have a school-record 31 wins this season.

The race for the top of the MAAC is muddled, with four teams within three games of the top of the standings. Only two teams -- Canisius and Marist -- have overall records above .500. Marist is currently in third place, but has won the season series against two of the other top four teams and hosts Canisius next weekend.

Kent State leads the Eastern Division of the MAC by six games, and leads Western Division leader Toledo by five games. Barring an upset in the conference tournament, the Golden Flashes are well on the way to their fourth straight regional.

With the MEAC separating into divisions this year, it's harder to determine the best team in the league. Delaware State is 33-14 and has won 15 straight games to lead the North, while Bethune-Cookman is in control in the South. Cookman was just swept in a nonconference series at Miami, with two of the losses by a single run. The conference tournament in Norfolk will show whether or not the South is still the dominant half of the league.

TCU and New Mexico are tied at the top of the Mountain West standings, and each won two of three games at home against the other. However, the Lobos struggled in nonconference play and are outside the RPI range normally considered for an at-large spot. TCU is secure as an at-large, so the MWC will get multiple bids if another team wins the tournament.

The regular-season race is tight between Bryant and Monmouth, who split their series in New Jersey earlier this year. Fortunately for the rest of the league, Bryant isn't eligible for the postseason yet after moving up to Division I. With one weekend left in conference play, only Monmouth has clinched a spot in the conference tournament; with ace Pat Light, it has the inside track to a regional.

The race for the Ohio Valley title is one of the tightest in the country. Defending champion Austin Peay leads Eastern Kentucky and Jacksonville State by half a game, with Eastern Illinois only two games back. For now, the bid goes to Jacksonville State, which won series at Austin Peay and Eastern Kentucky and hosts Eastern Illinois to finish the season.

The Patriot League playoffs begin this weekend, with regular-season champion Army hosting Lafayette and Holy Cross hosting Navy. The winners of those best-of-three series meet in the best-of-three championship series the following weekend. Army is 37-12 this season and lost only two conference games in the regular season. Those two losses were to second-place Holy Cross in the last weekend of regular-season play.

Like the Big West, it's surprising to see the Sun Belt on the single-bid list. The conference has sent three teams to regionals the past two seasons. This year, Florida Atlantic is the only team in the RPI Top 100, and only the tournament champion is likely to keep playing. Arkansas State and Florida International round out the top three in the standings.

With the regular season complete in the SWAC, Jackson State and Southern are the division champions. While the teams didn't meet in conference play, Southern swept a home-and-home series in late April and hosts the conference tournament.

There are two changes in national seeds and one change in hosts over the weekend.

South Carolina took over first place in the SEC East with a series win at Arkansas while Florida took two out of three at Kentucky. Based on conference standing and recent play, the Gamecocks join LSU and Florida as a national seed, knocking Kentucky down to a non-national No. 1 seed.

It continues to appear that there will be four regionals in the west. With Oregon, UCLA and Stanford seemingly safe, the fight for the last hosting spot is between Arizona and Cal State Fullerton. This weekend, Fullerton swept last-place Pacific to move into first place in the Big West while Arizona lost two of three at home to national seed Oregon. With similar résumés, the advantage goes to the team leading its conference. As an added benefit, that makes scheduling super regionals easier for the NCAA, since a Fullerton regional can be paired with a Los Angeles regional to minimize travel costs.

Jeremy Mills is a researcher for ESPN and is a contributor to ESPN.com's college baseball coverage.