06/25/12
10:07
PM ET
By Mitch Sherman
Overview: Arizona won its fourth national title and first since 1986 with a 4-1 victory over South Carolina to sweep the best-of-three championship series at the College World Series. The Wildcats rode the right arm of James Farris, who had not pitched since June 3 in the regional title game, a 16-3 Arizona win over Louisville. Farris allowed one run on two hits in 7 2/3 innings to extend the Wildcats' run of strong starting pitching performances. In 10 postseason games -- all victories -- every Arizona starter pitched into the eighth inning. The Wildcats scored in the top of the third and added three runs in the ninth, the game winner on Brandon Dixon's one-out double. Freshman reliever Mathew Troupe worked out of a bases-loaded, one-out jam in the bottom of the ninth to clinch it.
[+] Enlarge 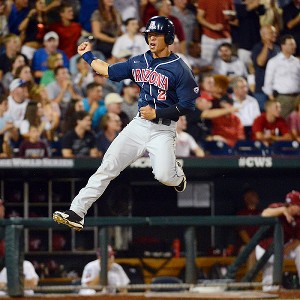 Harry How/Getty ImagesRobert Refsnyder, the College World Series' MOP, scored the go-ahead run for the Wildcats in the top of the ninth inning.

How the game was won: Dixon, a sophomore who entered for Joseph Maggi as a defensive replacement in the sixth inning, lined a 1-1 pitch from South Carolina closer Matt Price just inside third base to the left-field corner to score Robert Refsnyder from second base. Refsnyder had singled off Price, the career CWS leader with five victories, to open the ninth. Refsnyder moved into scoring position on Seth Mejias-Brean's sacrifice before the clutch hit from Dixon. Trent Gilbert then delivered a two-out single to right field to score Bobby Brown and Dixon.

Turning point: The Gamecocks stole momentum from Arizona in the bottom of the seventh inning, tying the game at 1 on Kyle Martin's RBI groundout to score Christian Walker. Two defensive lapses from the Wildcats aided South Carolina's lone run. Farris then hit Grayson Greiner to open the eighth. After a fielder's choice grounder, Chase Vergason stole second and took third base on a throwing error by catcher Riley Moore. Carolina looked ready to pounce, knocking Farris from the game. But Troupe got a called third strike on a full-count pitch to Joey Pankake. It ended the Gamecocks' threat and returned the edge to Arizona, setting the stage for its big top of the ninth.

Star player: Arizona used a simple formula of superb starting pitching to roll through an undefeated postseason. Farris kept up his end of the deal Monday. The sophomore from Gilbert, Ariz., struck out four and held the Gamecocks hitless until LB Dantzler's two-out single in the fourth inning. No Gamecock reached second base until the seventh. Even then, with Walker at third with one out, Farris got a bouncer from Martin to Dixon at first base. Dixon likely could have nailed Walker at the plate but looked toward second base, then took the sure out at first. Farris escaped the inning and kept the score tied by getting Tanner English on a fly ball to center field.