With two weeks to go until the field of 64 is chosen for the NCAA baseball tournament, it's time to crank up the bracketology machine and see where we stand.

There hasn't been much movement among the national seeds over the past month or so, but Florida State's series win over NC State on Monday night moved the Seminoles into the final national seed spot at the Wolfpack's expense. Clemson has made a late-season charge as well and could claim the spot with a series win in Tallahassee this weekend. 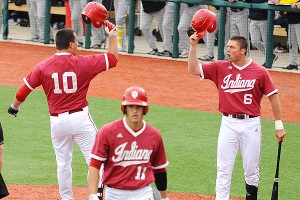 Courtesy of IU AthleticsIndiana leads the Big Ten and is in position to host an NCAA tournament regional.

Barring any major collapses over the final two weeks of the season, the other seven national seeds are secure: Vanderbilt and LSU from the SEC, North Carolina and Virginia from the ACC, Oregon State and Oregon from the Pac-12 and Cal State Fullerton from the Big West have all been near the top of the polls and RPI rankings all season.

Filling this season's role of Cinderella from the north is Indiana. The Hoosiers are 38-11 overall and in first place in the Big Ten. With an RPI in the top 20 and a brand new stadium, postseason baseball will be coming to Bloomington this season. If the Hoosiers sweep the regular season and conference tournament titles, they could sneak in as a national seed.

Indiana isn't the only team outside the traditional baseball powers that could be hosting a regional this season. Kansas State is atop the Big 12 and hovering near the top 20 in RPI, while South Alabama leads the Sun Belt (which is fifth in RPI) and joins Indiana in the top 15 in RPI. The NCAA loves to reward schools outside the traditional power base for strong seasons -- especially those that don't normally host regionals. That could be enough to push these teams past some of the usual suspects from the SEC.

Speaking of the SEC, the conference provides some interesting cases for the selection committee. Vanderbilt and LSU are secure as regional hosts, and South Carolina isn't far behind at fourth in the conference and boasting a strong RPI.

But the other candidates to host a regional have disparities among their conference standing and RPI. Arkansas has the third-best conference record but an RPI outside the top 40. Ole Miss and Mississippi State are in the top 20 in RPI but are further down in the conference standings. Odds are that whoever gets hottest among the Razorbacks, Rebels and Bulldogs down the stretch will claim a fourth hosting spot for the SEC.

Those disparities among RPI and conference standings, not to mention the human polls, could make this one of the more interesting NCAA tournament selection days in recent years. Which criteria will the committee emphasize? Let's look at two examples:

2. Maryland: The Terrapins are in the top 30 in RPI and have played more than half of their games against the RPI top 50. But they have limped to a 7-20 record in those games and are ninth in the ACC after losing eight of nine conference series.

Last year, the pendulum swung toward conference standing over RPI, especially for schools from non-power conferences. Given the similar composition of the selection committee this year, these projections followed that formula.

That could lead to some traditional powers being left out when the field is announced. Oklahoma is tied for second in the Big 12, so it should be able to overcome an RPI that's barely in the top 50. But Rice could miss the tournament for the first time since 1994, and even Miami isn't safe after slipping to eighth in the ACC late in the season.

But the biggest surprises could be in the Pac-12. The conference is third in RPI, but most of the heavy lifting has been done by the top four teams -- Oregon State, Oregon, UCLA and Arizona State. Stanford and defending national champion Arizona are in fifth and sixth, respectively, but both are outside the top 75 in RPI. The Wildcats are likely to be the first defending champion to miss the NCAA tournament since Oregon State in 2008 after the Beavers won back-to-back titles.

Here are my projections, as of May 14:

Jeremy Mills is a researcher for ESPN and is a contributor to ESPN.com's college baseball coverage.