12/05/09
7:30
PM ET
By Graham Hays
COLLEGE STATION, Texas -- In September, when North Carolina and Notre Dame met for the first time, I asked Tar Heels freshman Lucy Bronze about the biggest differences between women's soccer here and in her native England.

"In America, it's a lot more intense and everyone's more up for it," Bronze said on Sept. 4 after playing 33 uneventful minutes off the bench in a 6-0 win. "Whereas in England, it's a lot harder to train because of money and facilities and stuff. Whereas everyone in America supports the soccer teams, so you've got more facilities, more time, lots of things English teams don't have." 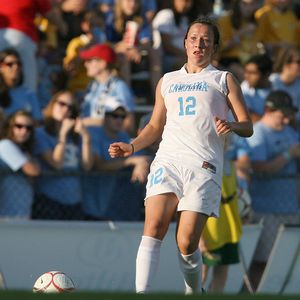 Andy Mead/YCJ/Icon SMILucy Bronze's training in England gave her different strengths than most of her teammates.

The intensity was on full display Friday night in the national semifinal rematch, as were the instincts of a player raised in a soccer culture that American training regimens have not yet duplicated. In UNC's 1-0 victory, Bronze's beautiful run down the right side, fed by Tobin Heath, set up Casey Nogueira's winning goal in the final 10 minutes.

After the game, UNC coach Anson Dorrance said the Tar Heels originally recruited Bronze, who attended camps in Chapel Hill from the time she was 12 years old, to play defense and warned her that meant she'd see little time behind a veteran back line this season. But with Nikki Washington's season-ending injury, Bronze began getting time in the midfield. Her three NCAA tournament goals before Friday's assist demonstrate a decided knack for the big stage.

"But the interesting thing that Lucy gives us out there, and we keep nagging our girls about, is if we can get the kids in this country to watch the [English Premier League], more of the highest level of the game on a regular basis, they're going to gain a polish and sophistication that just playing the game will never give you," Dorrance said. "The thing that Lucy Bronze has -- she's not the most athletic player on the field, she's not the strongest, she's not the most skillful, but she has a savvy that she has because she's just brought up watching the EPL."

Despite drawing a pair of Fighting Irish defenders on her late run, Bronze still managed to get the ball to the end line and deliver a perfect cross to Nogueira in front of goal.

"We took a lot of shots in that game and we couldn't score, but she made sure the pass that she gave gave us a shot inside four yards with the goalkeeper eliminated."

• North Carolina's famous three-player back line will get as stiff a test from Stanford forwards Kelley O'Hara, Christen Press and Lindsay Taylor in Sunday's championship game (ESPN2, ESPN360.com at 1 p.m. ET). Dorrance's defense relies on pressure up front and three players, plus keeper Ashlyn Harris, to breach whatever leaks develop in the channels sometimes available without a fourth defender.

Dorrance is a leading proponent of teams' playing with three forwards in the women's game, even if it's in a 4-3-3 formation like Stanford's that still offers a more traditional back line. All the while, he knows it could come back to bite him.

Whether or not that's the case Sunday will hinge on Whitney Engen, Rachel Givan, Kristi Eveland and Harris.

"The majority of losses we have in our history have been against three-fronts," Dorrance said. "And certainly the three-front that Stanford's going to throw at us, with pace and skill at all three positions is going to present a wonderful challenge.

"But you know, this isn't life or death for me or the girls. This is a sport. It's going to be a spectacle. There's going to be a lot of attacking, and I think that's what our game needs."