WeAreSC staff members recently got together to hold a draft of all-time USC greats. Each staff member selected a starter at all 22 offensive and defensive positions, along with a kicker, punter and a head coach for a total of 25 picks each. The four staff members -- Garry Paskwietz, Johnny Curren, Steve Bisheff and Greg Katz -- have more than 150 combined years of watching USC football, so there was a good breadth of experience in picking the teams. 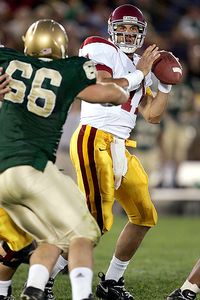 Jonathan Daniel/Getty Images A 37-2 record and a Heisman Trophy added up to the first overall pick in the USC all-time draft for Matt Leinart.

As you can see, the draft strategies provided by each staff member varied. Some went offense early, some went defense. One even went with a head coach in the first round. The initial rounds are filled with names that will be familiar to any USC fan reading, but some of the later picks could surprise, as some positions were harder to fill than others.

Thats what makes a draft like this interesting. When youre going through the annals of USC football, there are some amazing names competing for draft spots. Some will naturally make the list, some will surprise and some will be left out altogether.

Click here for complete rosters, draft results and a roundtable with the general managers.

The general managers for the all-time Texas draft got together to break down their draft strategies. Click here to get complete rosters, draft results and more.

1. Which player did you want to be certain to get?

Carter Strickland: Texas has been historically horrible at wide receiver, so it was an early priority to grab the best wide receiver in Texas history. That was why at the end of the second round I added Jordan Shipley. The thought was that putting him with Colt McCoy would make for the best quarterback-wide receiver combo of any of the teams. It turns out that thought was correct, as the next receiver taken was Roy Williams, and he was combined with Major Applewhite. After that, Kwame Cavil was selected to pair with Vince Young. 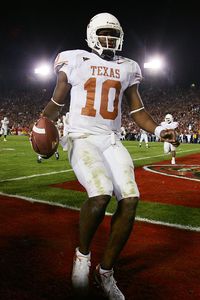 Donald Miralle/Getty ImagesVince Young was drafted No. 2 overall behind his successor, Colt McCoy.

Kevin Dunn: I started the process by listing every position 1-10 through my eyes. Then I created a big board of overall players with each position getting a ranking on strength.

Clearly DT and DB were the most loaded. I saw no big difference between my No. 1 DT and the ninth. As much as I would love Casey Hampton and Steve McMichael, the selections of Doug English (18) and Brad Shearer (13) show you how deep the DT position is, as Shearer was an Outland Trophy winner and English was a four-time Pro Bowler. LBs and OTs were light. I knew I could grab some really good LBs (Lyle Sendlein, Sergio Kindle and Scott Henderson) late but wanted the two best offensive tackles in school history. And I got them. Outside of Blake Brockermeyer, I believe the next tackles are significantly downgraded. As loaded as UT's secondary is, I think the top four or five really separate themselves. The top three on my board were Jerry Gray, Raymond Clayborn and Nathan Vasher. I was thrilled and shocked to get all of them. Good luck throwing on us. Because he was my first favorite UT football player, getting Jerry Gray at No. 6 was great. Erxleben was the only combo kicker I would have taken. WR was also slim after Rounds 4-5, so I wanted to get Jordan Shipley/Quan Cosby and either Cotton Speyrer or Mike Adams. I think Cosby is the second-best wideout in school history. He actually produced ... especially when it counted. Outside of Dan Neil, I was fine picking the interior of my O-line late. I had Casey Studdard as a top-four guard, and Roger Roesler and Will Allen were All-Americans. I had the quarterbacks ranked this way: 1) VY 2) Bobby Layne/Colt McCoy. 4) Marty Akins (my sleeper I didn't take because Layne fell into my lap.) 5) Major Applewhite/James Street. Akins was very underrated. Great athlete in a bad system. Lowell must make Erxleben take business ethics classes at McCombs.

Lowell Galindo: I approached this draft with the goal of building a team that would beat the three others in head-to-head competition. To do that I prioritized players by their value compared to others at the position. I believe that Tommy Nobis and Derrick Johnson are clearly the best linebackers in school history with a sizable gap from others in the conversation. It was difficult and perhaps borderline crazy passing up Ricky Williams with the fourth pick, but in taking Nobis and DJ back-to-back, I gave myself easily the biggest edge at any position for a team in this draft. That was also my philosophy with my next two picks: Brian Orakpo and Tony Brackens.

2. Who was your best sleeper pick?

Carter Strickland: Grabbing Noble Doss in the 19th round was probably a pick many did not see coming, since many don't even know who he is. But the two-way player in the 1940s made some of the biggest plays in Texas history. Doss made the "impossible catch" in the 7-0 win over reigning national champ Texas A&M in 1940. That catch snapped the Aggies' nine-game win streak. He might have had an even greater impact on defense. He had 17 career interceptions in an era when the forward pass was hardly embraced by anyone. Those 17 career interceptions are tied for the most in Texas history. Nathan Vasher tied Doss some 63 years later.

Sean Adams: I took running back Shon Mitchell in the 19th round. He's my best sleeper, and it's not even close. In just two seasons, the last in the Southwest Conference and the first in the Big 12, Mitchell rushed for 1,724 yards and 14 touchdowns with an average of 5.9 yards per carry. He also did this in the structure of an ultra-talented backfield that consisted of Ricky Williams and Priest Holmes.

Mitchell played at Texas for only two seasons but is 15th on Texas' all-time list. He averaged 6.2 yards per carry in 1995 and was newcomer of the year in the last year of the Southwest Conference. If he'd had four years in a "normal" backfield, he would shatter every notable record.

Kevin Dunn: I don't think any of us who weren't around to see it can truly understand how dominant Bill Atessis was in college. He was ahead of his time in terms of size and agility -- similar to Walt Patulski at Notre Dame, who was eventually the No. 1 pick. Getting arguably the best running back in college football history to pair with Jamaal Charles was an unexpected gift. All of our boards were so different in terms of who we thought was the best at their position, which made it fun, but "sleeper" is truly in the eye of the beholder. In my opinion, drafting the second- and third-best receivers in UT history -- Cosby at 12 and Speyrer at 15 -- was theft. Getting an edge-rusher like Kiki DeAyala that late was a huge surprise. 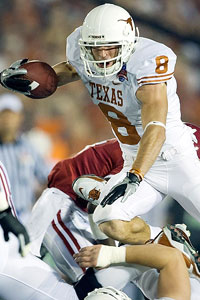 Ben Liebenberg/US PresswireJordan Shipley was the first wideout selected at No. 8 overall.

Lowell Galindo: Where do I start? Roy Williams falling into my lap with my eighth pick. To put that in perspective, Carter took an unquestioned great in Jordan Shipley at No. 8 overall. But I got a legend in the eighth round! I also had Thorpe winner Aaron Ross gifted to me in the 16th round, but the biggest sleeper of all was Major Applewhite with my second-to-last pick. I knew I wasn't getting VY or Colt, and when Kevin selected Bobby Layne in the second round, I knew I could load up at different positions and select Major late. I think he will be OK with that when he sees the O-line I got for him.

3. What player were you most disappointed to miss out on?

Carter Strickland: Lowell Galindo had an annoying habit of grabbing players just before the next person in line was to select them. In my case, he grabbed Texas' two best linebackers, Tommy Nobis and Derrick Johnson, off the board with his first two picks. The plan had been to take one of those two with my second pick. But since the draft was snaked -- one through four followed by four through one -- they were long gone by the time my pick came along.

Sean Adams: Derrick Johnson is the guy I wish I hadn't missed out on. When Lowell Galindo made the run on linebackers grabbing him and Tommy Nobis, the strength of the position dropped off. I love DJ as a player and leader.

Kevin Dunn: I have to get on my boy LG, who snagged my childhood hero Eric Metcalf. I was planning on using him with Ricky Williams (I didn't think Earl Campbell would fall to me) and splitting him out. He would have finally had some talent around him and a line that could block. Sean got me on Shane Dronett (I tried to talk him out of it with an anecdote, but no go). And finally, my top center on the board was Bill Wyman -- thanks, LG! I really wanted Scott Appleton, Britt Hager and Earl Thomas.

Lowell Galindo: I'll have to direct my aggression toward my friend Sean Adams for a moment. The only two times in the draft I may have put the phone on mute to curse someone's name was because of Sean's selections of Casey Hampton and Bryant Westbrook. Hampton's selection in the third round was easier to take because I believe his value is decreased in this draft thanks to GREAT depth at defensive tackle. Still, he was the top DT on my board. Westbrook was not the top cornerback on my board but is one of my favorite players of all time regardless of sport. His hits on Leeland McElroy and Notre Dame's Randy Kinder are two of the reasons why.

Here are the results of TideNation's all-time Alabama team draft. Click here for complete draft coverage, including rosters and a rundown of each general manager's strategy.

How would you go about building an all-time team for your favorite college program? It's not easy, but it's what we decided to figure out. Our writers for Alabama, Florida, Florida State, Georgia, Michigan, Ohio State, Oklahoma, Penn State, Texas and USC got together with some program experts -- announcers, historians and others -- to draft all-time teams for each school. Each expert had his or her own squad -- a full team, with 11 on each side of the ball, plus a kicker and punter. The draft was conducted fantasy style, so whoever got the first pick overall had the last pick in the second round.

From Deion Sanders to Charlie Ward, there was plenty of talent for our FSU GMs to pick. Draft results »
• Recruiting news | @ESPNFSU

There should be no surprise that the Georgia draft kicks off with Herschel Walker. After that, it's less clear.
Draft results »
• Recruiting news | @ESPNGeorgia

Between Heisman Trophy winners and No. 1 overall picks, there was stiff competition in the race for the top choice. Draft results »
• Recruiting news | @ESPNOhioState

Known mostly for its linebackers, Penn State also had an impressive stable of running backs from which to choose. Draft results »
• Recruiting news | @ESPNPennState

From star QBs Colt McCoy and Vince Young to RBs such as Earl Campbell and Cedric Benson, there was a lot of star power at the top of the Texas draft. Draft results »
• Recruiting news | @ESPNTexas

The school known as Tailback U also produced its share of stars all over the field. Draft results »
• Recruiting news | @WeAreSCStaff

TideNation's Alex Scarborough discusses the player who had the greatest impact at Alabama.

2. Max Boydston, DE, 1951-54: Given the lack of depth at defensive end, hard to believe this All-American got overlooked.