Alabama may not have technically won the race for the nation's top-ranked recruiting class, but the Crimson Tide are up by about five touchdowns entering the fourth quarter. 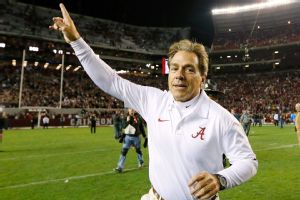 Kevin C. Cox/Getty ImagesNick Saban is in the lead to finish at No. 1 for the third consecutive season.
The Crimson Tide's class includes a handful of five-star prospects. Reeling in No. 3 Cameron Robinson, No. 6 Da'Shawn Hand, No. 8 Tony Brown No. 12 Bo Scarbrough and No. 15 Marlon Humphrey have all but locked up the crown again.

The race for No. 2 and the top five is much more interesting with less than a week before pen hits paper.

Texas A&M currently sits at No. 2, but Florida State is poised to close very strong and potentially finish second. A third team in the race for the second-ranked class is LSU.

There are currently seven SEC programs in the top 10. The SEC West has three of the top four classes currently with Alabama No. 1, Texas A&M No. 2 and LSU No. 4.

All three Sunshine State traditional powers have top-10 classes as well, with the Seminoles No. 3, Florida No. 8 and Miami sitting at No. 8.

Check out the national class rankings and see where each major conference team stacks up.

There are 14 prospects in the top 100 of the ESPN 300 player rankings who have yet to announce their college decision. Here's a look at the top prospects remaining. For the latest on their recruitments and our predictions about where they'll land, check out RecruitingNation's Hot Board 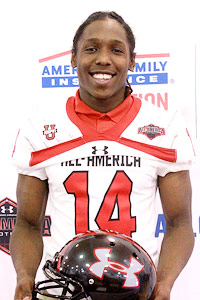 Courtesy of IntersportAdoree' Jackson is the lone member of the top 10 who hasn't announced his college decision.

No. 9 Adoree' Jackson (Gardena, Calif./Junipero Serra High)
The skinny: Four schools remain in the hunt for the five-star corner with designs on playing offense at the next level. Florida has been consistently in the mix throughout with USC, LSU and UCLA rounding out the final quartet.

No. 14 Lorenzo Carter (Norcross, Ga./Norcross High)
The skinny: Florida received Carter's first official visit in September, with LSU, Florida State and Georgia receiving January visits. Most signs point to the Bulldogs, where Carter is this weekend.

No. 16 inside linebacker Kenny Young (River Ridge, La./John Curtis Christian)
The skinny: The inside linebacker has taken January official visits to Texas A&M, Arkansas, Oklahoma State, LSU and UCLA this weekend. The Bruins have been the favorite for weeks, but the hometown Tigers and the Aggies have made strong pushes this month.

No. 17 Malachi Dupre (River Ridge, La./John Curtis Christian)
The skinny: The nation's No. 1 wide receiver has been on a whirlwind official visit tour since Jan. 17 with trips to LSU, Alabama, Florida State, Ole Miss and UCLA this weekend.

No. 22 prospect Ermon Lane (Homestead, Fla./Homestead High)
The skinny: Florida State is the lone school to receive an official visit from the former Florida commitment, which is this weekend.

No. 25 prospect Solomon Thomas (Coppell, Texas/Coppell High)
The skinny: No. 4-ranked defensive end Thomas will pick from Stanford, UCLA and Arkansas with the Cardinal considered the favorite in recent weeks. His sister attends Arkansas.

No. 24 Juju Smith (Long Beach, Calif./Polytechnic High)
The skinny: USC is considered the favorite for the versatile Smith with Notre Dame, Oregon and UCLA still in the fight.

No. 26 Damian Prince (Forestville, Md./Bishop McNamara High)
The skinny: Prince is visiting Florida this weekend, and will announce with Maryland, Florida and South Carolina hats on the table. A decision is expected between the Gators and Terrapins.

No. 35 cornerback Terrence Alexander (River Ridge, La./John Curtis Christian)
The skinny: The three-star corner has visited Stanford, Notre Dame and Ole Miss in January, and will pick between the trio of programs with Ole Miss and Notre Dame both trending in recent weeks. 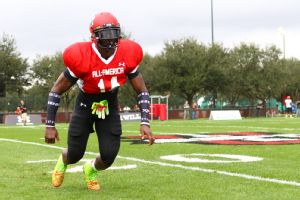 Miller Safrit/ESPNRashaan Evans is feeling the pressure to sign with hometown Auburn.

No. 52 Rashaan Evans (Auburn, Ala./Auburn High)
The skinny: The No. 2 outside linebacker will announce between hometown Auburn, UCLA and Alabama with the Tigers trending after having begun the season behind Georgia, UCLA and Alabama.

No. 60 Malik McDowell (Southfield, Mich./Southfield High)
The skinny: Ohio State took the last swing at landing McDowell this weekend while the Spartans are considered the favorite. Florida State and Michigan round out the final four.

No. 67 Damien Mama (Bellflower, Calif./St. John Bosco High)
The skinny: The No. 4-ranked offensive guard has a final three of USC, Alabama and BYU, where he is officially visiting this weekend. The Trojans are considered the heavy favorite.

No. 75 Michiah Quick (Fresno, Calif./Central East High)
The skinny: The Sooners are considered the favorite, and look poised to continue the recent run of recruiting success in Northern California. UCLA and Notre Dame are holding on to hope.

No. 86 Chris Lammons (Fort Lauderdale, Fla./Plantation High)
The skinny: The cornerback prospect and former Florida commitment is considered a lean to South Carolina over Wisconsin.

The nation's top players will be making their college decisions today. Here's a look at when you can expect those announcements:

You can watch ESPNU online via WatchESPN. You can watch Andrew Williams' commitment on ESPN3 during our 2 p.m. ET show.

To see where we think these guys will go, check out the predictions on our Hot Board.

The players in the ESPN 300 will be the stars of tomorrow for many college programs across the country.

Here's a look at how each team in every major conference is doing on the recruiting trail as signing day nears:

Will the rich get richer in the ACC? The defending champs are in for a fight from their in-state rival. ACC

Urban Meyer is always a force on the recruiting trail. Will Ohio State finish with the top class in the conference? Big Ten

The Big 12 has fallen behind in the national title hunt. Can the Class of 2014 put the conference back on the map? Big 12

At one point, every SEC team was ranked in the national top 40. Will they finish with top classes? SEC

Recruiting is unpredictable. That's what makes it fun. RecruitingNation's scouts looked back at the top prospects since 2006.