GAINESVILLE, Fla. -- It started innocently enough with a hashtag and an illustration tweeted by Florida wide receivers coach Joker Phillips. There was the Joker, the Batman villain portrayed by Heath Ledger, wearing a blue Gators blazer including the hashtag #ComePlayWRFortheJoker.

Others followed. An astronaut planting a Gators flag and a newspaper featuring the hashtag and Jeff Driskel watching the Kentucky Derby among them. 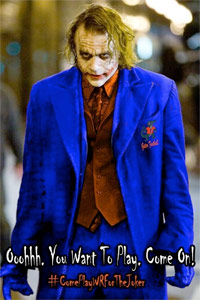 Not to be outdone, offensive coordinator Brent Pease posted his own masterpiece of Harry Potter flying over The Swamp with his three quarterbacks, Driskel, Tyler Murphy and Skyler Mornhinweg looking up at Potter on a broomstick. It was captioned with "Chasing #TheStandard."

Assistants Brian White, Derek Lewis and Tim Davis have all joined the campaign as well.

While funny, the campaign is also serious business, helping Florida go on the offensive on the trail. Instead of just private messages to recruits, the Gators are proactively using Twitter, as well as Facebook and Instagram, as new outlets for reaching prospects.

Coach Will Muschamp has refrained from posting the comical photos but has used Twitter to promote the success of his program, including several tweets about the eight Florida players who were selected in the 2013 NFL draft.

Muschamp hasn't said much about his assistants' forays into memes, but he has made it clear that he will do what is necessary to help Florida recruit the top players in the country -- even if that includes getting creative with the recruiting process.

"I'm not very good at that stuff," Muschamp said at a recent Gator Club gathering. "We have some coaches that have good imaginations."

But does this unique recruiting pitch have any effect on high school players and coaches?

Jacksonville (Fla.) Providence coach Bobby Raulerson, whose star left tackle, David Sharpe, is the No. 12-ranked player in the country, said this tactic is certainly helping the Gators get noticed.

"We all know college football is one of the most competitive businesses on the planet," Raulerson said. "And, with everyone relying on social media to aid in the recruiting process, success or failure boils down to one question. How do you distinguish yourself from the competition? While I don't think it will affect any recruits' decisions to attend UF, it does create the all-important 'buzz' that coaches are always searching for. Without a doubt, I think it is a creative way for the Gators to stay in the news during the heart of spring recruiting."

"I think it's funny," Ward said. "… It's very catchy. It caught my eye and it gets you to look at Florida in a different light because they are being creative which a lot of other schools aren't. I know a lot of coaches use social media to message kids and talk to them and things like that, but Florida is using it to promote their program in a positive way and for their own benefit. It's eye-catching and just draws more attention to the program even more."

As everyone in #gatornation awoke.. The joker awaits everyone to come out and play& instagram.com/p/X13mN1NWHK/

"To be honest with you, that's how kids interact now," Shakir said. "They are always on Twitter. Facebook is kind of out of the picture now, but they are on Twitter and Instagram. It's really how they do their whole interaction with everybody. I think it's a phenomenal idea. There's a saying that if you want to get in touch with people then you have to know how to communicate. The more you interact with the kids on their level then the more they are comfortable with you as a coach."

Whether or not recruits think the posts are cheesy is irrelevant, Shakir said. It allows players to see a more personal side of a coach -- a side with a sense of humor to which high school students better relate.

Florida is taking to Twitter to get the word out to recruits. What are other schools selling on the trail? Our writers take a look at each team, by conference:
• ACC | Big 12 | Big Ten
• Pac-12 | SEC

"It opens dialogue. It opens communication and it's intriguing," the Lincoln coach said. "When you start a conversation with someone it's an icebreaker. That's where it helps -- especially with kids.

"Anytime you can get someone to laugh at something, not only that, but then the kid always enjoy when adults can laugh at themselves so it doesn't appear that the adults are uptight. I think coaches at big-time schools, especially at like the University of Florida, can be intimidating to the kids when they come in, but if that coach has a way to break the ice, then maybe that kid will open up a little bit more and connect with the coach and feel a little bit closer with the coach."

Ward, the three-star tackle with offers from Pac-12, Big 12, SEC and Big Ten programs, admits social media efforts won't influence his decision, but he added he is learning more about the history of the program because of the recent photos and tweets.

"It just keeps Florida fresh in my mind," Ward said. "They are thinking outside of the box and being creative. It just catches my eye. I follow both pages on Instagram, Coach Joker and Coach Davis. They put up some funny pictures but they also put up some good photos about the history of the program and where the program is headed. It's good to know."

Opinions might differ on this new and innovative recruiting philosophy, but one thing is certain, recruits will never look at the Batman and Harry Potter movies the same.

We've gone to 25 teams in our class rankings and there is a little shakeup near the top in the latest update. While Texas and Florida remain first and second, Michigan moves up a spot to claim the third spot. LSU slides to No. 4 and Texas A&M remains at No. 5.

The SEC dominates the top 25 with nine teams in the rankings, including five in the top nine and seven in the top 12. The ACC places six teams, with the Big Ten adding four, the Big 12 landing three and the Big East, Pac-12 and independents all having one each.

The players in the ESPN 150 will be the stars of tomorrow for many college programs across the country.

Coming to a stadium near you! twitter.com/CoachArtBriles&

Want the latest news from the camp and combine circuit? RecruitingNation has you covered. Events coverage