by Steve Wulf, ESPN The Magazine
When I originally sat down to write this piece on the rubber wristband, I thought it would be a mock tribute to the latest sports fad. In fact, the first lead I wrote was,
I would run down all the embossed messages.

Finishing with YOU SUCK.

I would point out that every sports team seems to offer one, even if that team (the Tampa Bay Devil Rays, for example) doesn't have a pulse under its own wristband. I would take a gentle jab at New York Yankees fans, who could choose from bands honoring Tino Martinez, Randy Johnson, Bernie Williams, A-Rod, Derek Jeter, Gary Sheffield, Hideki Matsui, Jorge Posada and Mike Mussina. I would be certain that Felix Escalona bands were already rolling off the assembly line in Taiwan.

I would write about one of my 10-year-old twin daughters, who takes more care putting on her various uniforms than Reggie Jackson ever did, and how she wears five different rubber wristbands: two different kinds for the Red Sox, one clear DREAM, one yellow LIVESTRONG and one blue COURAGE. I would point out that some schools around the country, in an effort to control the craze, have limited their students to just one band a day.

I would link the rubber (silicone, really) wristband to such other fads as the pet rock, the Tamaguchi, Katie Holmes. In short, I would play it for laughs.

But then I talked to Kevin Carroll.

Carroll is a former NBA trainer and Nike ambassador who is now a motivational speaker and author. His "Rules Of The Red Rubber Ball: Find and Sustain Your Life's Work" was published this fall and trust me, you'll know who he is soon enough. He also just happened to have a big hand in the whole RWB phenomenon.

He didn't start it, mind you. No, the wristband itself dates back to the '60s. Back then, it was just a series of rubber bands that urban basketball players put on their wrists as both a fashion statement and a shooting aid. "I remember seeing Earl Monroe wearing them," Carroll says. "The I-95 Eastern Corridor guys like Phil Chenier and Tiny Archibald." The next thing he and we knew, every athlete was wearing elastic cloth-covered wristbands.

But it wasn't until 2001 that the fashion statement took on some meaning. Carroll, working at Nike at the time, noticed that clear DREAM bands were being put as giveaways in boxes of Kevin Garnett shoes. "You just can't put dreams in a box," Carroll told his colleagues. "Dreams should be able to live and breathe." So Carroll asked if he could use them in the motivational talks he gave at schools and camps. Part of his spiel, in fact, had to do with the acronym DREAM: "Dedication, Responsibility, Education, Attitude, Motivation." Pretty soon, Carroll was handing them out by the thousands.

Among the kids touched by his talk, and by the DREAM band, was the son of Nike executive Peter Ruppe. Pretty soon, Nike was making and marketing BALLER bands. Scott MacEachern, general manager of the Lance Armstrong brand, saw an even greater potential for the bands, a way to blend cool and commerce and community. As he's said, "We saw all the TNT in the middle of the room, and all we did was light the match."

So the LIVESTRONG was born a little over a year ago, the band that celebrated both Armstrong's success (yellow for the jersey) and spirit (overcoming cancer). In the year since Sheryl Crow displayed hers on the Today show, some 50 million have been sold by the Lance Armstrong Foundation, which donates a dollar for every one to cancer research. And other charities and causes have appropriated the rubber wristband, with their own colors and messages.

If you're thinking -- as I did -- that Carroll might not like that his original message was trumped, you, too, would be wrong. "I love it," he says. "In Canada, they call them 'awareness bracelets,' and it's so true. Not only are we becoming more aware of worthy causes, we're becoming more aware of each other. Every one of those bands tells a story, and everyone who wears one wants to tell it. The next time you see someone wearing one, just ask him or her why. The LIVESTRONG was especially effective because all of us have been touched by cancer, men and women, black and white, the superstar athlete and the child. Puts us all in the same tribe.

"It's powerful stuff, isn't it, the way a little silicone bracelet has brought us all a little closer together?"

Hmmm. I wonder if there's a band that reads FORMER CYNIC?

Steve Wulf is an executive editor of ESPN The Magazine. Comment on E-ticket at ESPN.eticket@espn3.com 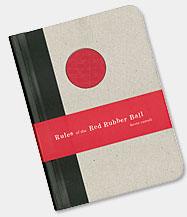 Rules Of The Red Rubber Ball: Find and Sustain Your Life's Work
Buy It Today!