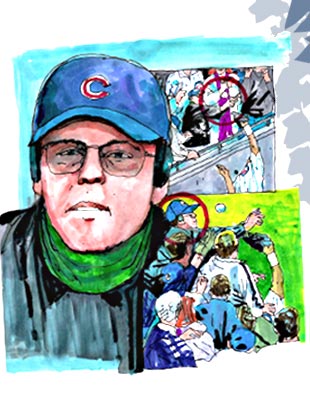 It's impossible not to imagine all of it -- Alou, the ball and the dreams of every Cub fan -- coming together right above my head. And it's frightening to realize this: I likely would have done the same thing. I would have been Steve Bartman.

Back to ESPN.com | Print | Send to Friend
[By Wayne Drehs
Illustrations by Larry Johnson ]
I
t's a steamy, hot Chicago afternoon, and deep inside my own personal heaven I am searching for hell. The Steve Bartman seat.
I'm on a quest to find sports' most infamous fan. My goal is to peel back the layers of the mystery behind Bartman, who hasn't provided any insight into the most painful night in Chicago Cubs history -- October 14, 2003 -- other than a 185-word statement the morning after. I desperately want to understand more, and I'm starting at the scene of the crime: Wrigley Field's left-field corner just beyond the foul line. Aisle 4, row 8, seat 113. A nearby usher sends me in the right direction, motioning to the last seat in the eighth row, the one with the Cubs stickers plastered across it. The forest-green color stands out on this sunny day, and I instantly wonder why it isn't black, a memorial-like armband forever symbolizing the death of a World Series dream. The team still sells this seat for every game, the usher tells me, but on this day, whoever bought the front-row seat with the unobstructed view of left field has yet to show up. So I sit. My toes are close enough to push against the back of Wrigley's famous brick wall. My eyes close enough to pinpoint which blades of grass were stepped on during batting practice. But Wrigley Field -- the happiest place on earth for any Cubs fan -- has in my mind quickly turned dark. I can't help but lean forward, look to the ground and picture Moises Alou on that chilly autumn evening. I can't help but look toward home plate, then to the clear blue skies above and picture a lazy fly ball heading in my direction. It's impossible not to imagine all of it -- Alou, the ball and the dreams of every Cubs fan across the world five outs away from the World Series -- coming together right above my head. And it's frightening to realize this: I likely would have done the same thing. I would have been Steve Bartman. A pair of jersey-wearing Cubs fans behind me, guys in their 20s who bought their tickets on eBay and are ditching work for the day, ask what I'm up to. I tell them it's the Bartman seat. And they react like third graders who have just been given extra recess: complete giddiness. "You're kidding me!" Jim Laubinger says, nearly spilling his full beer as he leans in to get closer to the seat. "Can I sit there for an inning?" Seconds after I give him permission, his buddy Jason Eardley chirps up, "I get it next inning!" Ten minutes later, the Red Sox fans behind us chime in. They want to know what we're buzzing about. "Are you kidding?" Eardley says. "This is the Bartman seat." Now they want to sit in it. Before we know it, it seems like half the section is rotating in and out of the seat before innings, after innings, during innings. It's like a line waiting to sit on Santa's lap. Only this lap is the most horrific plot of real estate for any Cubs fan. A college-aged woman announces to the section that she's going to get a beer. But she'll be right back. "Bring us one," Eardley says. "I mean, we showed you the Bartman seat." She smiles and flirts, but returns empty-handed. The message, however, is clear: Two years later, people still care about Bartman. The pain is still there. This simple spot is a piece of molded plastic that will forever belong to everyone who has loved the Cubs. Me. My wife. My dad. My grandfather. My best friend. Everyone. They're the reason I'm here. They're the reason I must get answers. Whatever happened to Bartman? What became of the man whose bare hands got in the way of the most notorious foul ball in baseball history? Some said he'd moved to London or Florida. Others murmured that he'd undergone plastic surgery, hair replacement, name changes. Was any of it true? 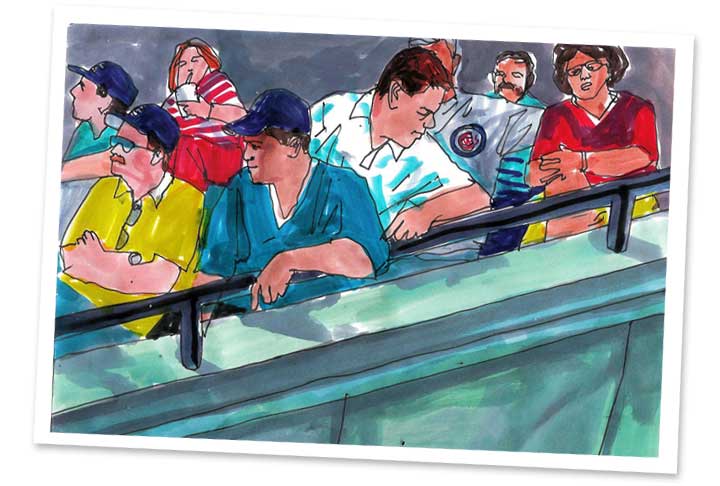 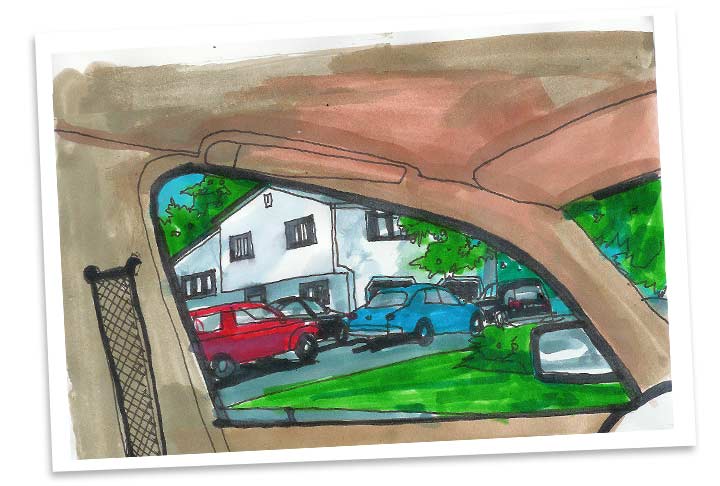 The sun is shining, the birds are chirping and the world seems still. But my heart is racing. As I drive farther and farther down Bartman's parents' block, looking for his address, I begin wondering whether anybody is suspicious of my car. My heart beats faster and faster, thinking some suspicious neighbor is going to phone 911 and a patrol car is going to pull up screeching and blow my cover. Finally, as the street comes to an end, I see the Bartman home. Tucked back into a wooded lot with mature trees and curious squirrels, the white bi-level home looks warm and inviting. Four vehicles sit in a circular driveway, two of which -- a shiny black Acura and a generic black pickup truck -- look like they could belong to a man in his late 20s. Inside, the house appears quiet. The drapes are drawn. The doors and windows are closed. I park across the street and wait. A neighbor eventually walks outside, picks up his morning paper and stares at me, likely wondering why this rental car with Kentucky plates has been sitting in front of his house for more than an hour. That's the moment when I flash back to something Cohen told me earlier in the week. "I'm not going to say people don't drive by, but I don't pay attention," he said. "It's a quiet street -- everybody looks out for everybody else." I feel like a stalker. More dirt-digging private investigator than entrepreneurial journalist. More People Magazine than ESPN. Hoping to quell the neighbor's suspicions and avoid a loitering ticket, I drive off and find another spot at the end of the street to wait. Boredom settles in. I wait for something, anything to happen, listening to WGN Radio's hype of the Cubs-Red Sox series to keep me awake. Then, at a quarter of nine, the Acura pulls out of the Bartman driveway. I don't know who's driving, so I switch the radio off, throw the newspaper on the floor, shift the car into drive, and slam on the gas, doing everything I can to catch up to the car. At the first intersection, the car is nowhere to be found. I can turn left. I can turn right. I choose right. My heart is pounding. My mind is racing. Could it be him? What am I going to say? What am I going to do? What if he knows I'm following him? And the worst thought of all: What if I lose him? Lucky for me, I guessed right. The Acura is progressing at the pace of a snail, puttering along in the right lane. I proceed ahead, secretly disappointed I'm not in a high-speed chase on a cable-news channel. At the next stoplight, I slowly pull forward in the left lane. The car stops. I look to my right. It's Bartman. 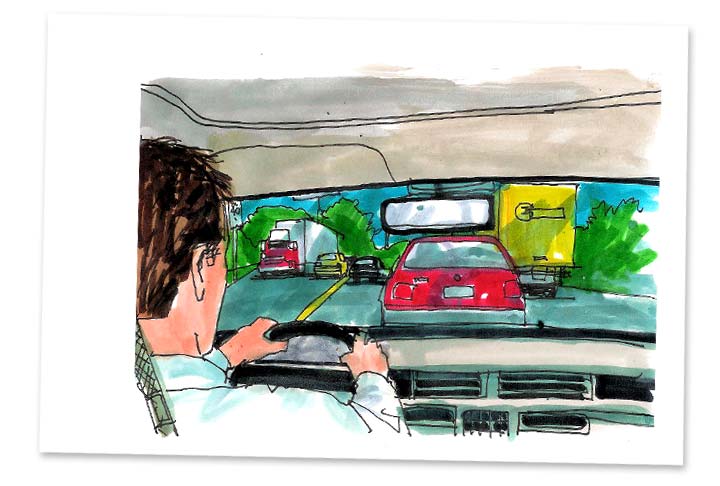 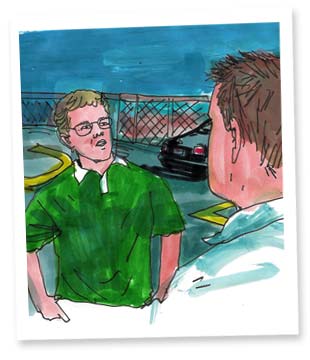 "I'll go over this with my legal team, and we'll get back to you. Does that sound good?." -- Steve Bartman 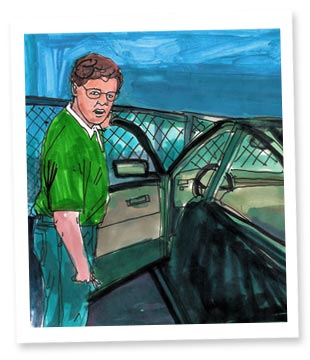