The story of the 2002 World Series is written in ThunderStix and Rally Monkeys.

It's the story of the Anaheim Angels taking Games 6 and 7 and claiming their first world championship. There are pages on Scott Spiezio's improbable home run. There are long, rhapsodic passages written about Frankie Rodriguez's whipsaw motion and wicked breaking balls. And there are whole chapters dedicated to the power of Troy Glaus.

But there's a footnote to the story, too, a bit maybe only the folks in San Francisco still carry with them. It's a little something about losing heroically, about laying it all on the line and having everything you've got not be enough.

Call it the Robb Nen note.
The beginning of it is an ending.

It's Saturday, October 26, 2002. Game 6 of the World Series in Anaheim. The San Francisco Giants lead the Angels 5-4 in the top half of the eighth. Barry Bonds has just misplayed a ball down the left-field line, allowing Chone Figgins to take third and Garret Anderson second, and 40,000 fans are rolling their ThunderStix and swinging their Rally Monkeys like they're exorcising demons. With nobody out and the game on the line, Giants manager Dusty Baker walks to the mound, takes the ball from reliever Tim Worrell and calls for his closer, Robb Nen.

Nen comes in with 43 saves on the season. He's nailed down two games in the World Series so far, plus three in the NLCS, and two more in the division series. He's money. He sports a big-time fastball, a slider known to make grown men cry and a funky toe-tap delivery that makes it impossible for guys to dig in because it messes with their timing. This much, the Giants know: When Nen takes the mound, in the words of first baseman J.T. Snow, you always feel "like you could relax, like it was over."

He told me, it must have been a thousand times, 'let everything you do show your respect for the game,' " Nen says. " 'Don't cheat yourself, and don't cheat your teammates.'

Troy Glaus, the Angels' Hoss of a third baseman who has three home runs in the Series and is one-for-two on the night, steps in. This is the closer's moment: Head-to-head with a bruising bat and the game, and the championship, on the line. My stuff against yours, no quarter and no holds barred. This is the time when Nen reaches back, not just to the reserves of strength in his arm, and not just to 300-plus saves worth of experience over a 10-year career, but all the way back, to the lessons his dad, former big-leaguer Dick Nen, taught him about always going hard. "He told me, it must have been a thousand times, 'let everything you do show your respect for the game,' " Nen says. " 'Don't cheat yourself, and don't cheat your teammates.' "

His first pitch is a cut fastball tailing out and away for ball one. His second is a slider, also outside, but Glaus hacks at it anxiously and the count is even at 1-1. The third pitch, another slider, cuts two feet outside, and Glaus, chastened by the last swing, holds back.

Two-one. Hitter's count. Enough with the slider; Nen is coming in and going all-out. 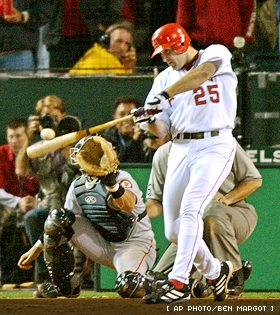 "I knew Glaus was sitting dead-red, but I had to throw the inside fastball," he says. "I couldn't stand the idea that later I'd think maybe I hadn't thrown as hard as I could in that situation." He fires. The ball starts off inside, but it fades when it should bite. It comes out over the plate.

Nen sees the flight of the ball and winces.

Glaus tracks it and tattoos it.

His double, over the outstretched glove of Giants center fielder Kenny Lofton and off the wall, scores two. The Angels take a 6-5 lead.

Nen retires three of the next four hitters, striking out two of them, but the damage is done. The tide is turned. Twenty-four hours later the Angels -- not the Giants -- are World Series champs.

Troy Glaus is a hero.

Robb Nen never pitches again.
He wasn't right out there that night. Check that. He had nothing … nothing but a pitching shoulder full of torn labrum, torn rotator cuff and a whole lot of want-to.

His arm slot was slipping like a setting sun. His velocity was a memory. The Robb Nen who'd scared the bejeezus out of big-league hitters with 97-mile-an-hour nastiness for the last eight-and-a-half years was a ghost.

It's the rare athlete who raises his game, through the pain and beyond the risk, to some absolute, damn-the-torpedoes level of commitment. And while it's right, in these days of war and natural disaster, to keep sports in proper perspective, 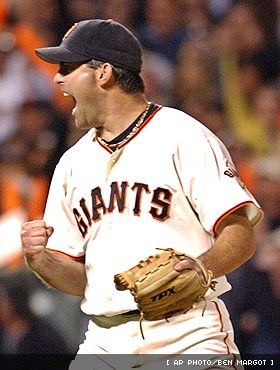 it's also right to say these athletes and their commitments elevate the games they play, make them resonate and inspire, make them matter.

Nen took the old, almost clichéd, idea about making sacrifices for the good of the club and brought it to life, stretching it to the nth degree. Some guys give up playing time. He gave up his shoulder.

And when he did it, he gave a word like "team" a real shape and weight, and transformed an abstract thing like "desire" into something palpable. He turned the game into a series of questions: What do you love? How much do you love it? What would you be willing to give up for it?

But numbers aside, things were changing.

"A few weeks before the break, in Toronto, something felt wrong," he says. "I'd pitched an inning and a third [and thrown 21 pitches] that night and I remember sleeping on the plane going home and waking up with the top of my shoulder just aching."

Pitching is a violent act. Every outing does some kind of muscular damage and leads to some degree of swelling from which a pitcher must recover before taking the hill again. "Every pitcher's MRI I've ever seen is 'irregular' in one way or another," Giants head trainer Stan Conte says. Major-league ball clubs have sophisticated approaches to preparation and rehab, and expert medical staffs dedicated to the players' physical well-being, so we tend to forget how traumatic and unnatural the ballistic motion is. Concentrating on results, on balls and strikes, on hits and outs, we don't think much about the thin line between fluid mechanical performance and painful mechanical failure.

Nen spent his entire career dancing on that line. "My mechanics were a mess," he says. "Everybody tried to coach me off them." He had a slide step instead of a leg kick on the wind-up, and a left-toe stutter-step in his delivery that held his arm and shoulder back a half-beat before they came slingshotting toward the plate. Not the sort of thing you'd train a guy to do. "There was some problem about my toe pointing down when I was coming up, and when I tried to correct it, I just literally stumbled into the tap thing. It was an accident. But when I did it, it felt right to me, and I could throw real hard that way so I stuck with it."

When you're going right, when you're racking up strikeouts and saves and reveling in the W's, you don't think about it much. But when Nen did think about it, he figured he was probably playing with fire with the pressure his delivery put on his body. "With those mechanics, to do what I did … I was lucky," he says.

Until his luck started to run out.