Graham Bensinger
ESPN Radio
Bensinger, 18, is host of "The Graham Bensinger Show" on 1380 ESPN in St. Louis and Sportsradio 620 WHEN in Syracuse. His list of high-profile interviews ranges from O.J. Simpson to Pete Rose, Dan Quayle and Adam Sandler. He is a frequent TV guest with appearances on ABC, ESPN2, MSNBC, Fox News, CNN, Court TV and others.

To see how Graham accomplished all this at age 18, click here for a profile from "CNN NewsNight."

What is E-TICKET?
ESPN.com's E-ticket is a special feature that brings in-depth coverage to sports stories and personalities through magazine-style writing, vibrant photography, multimedia and interactivity.

Look for it every weekend on ESPN.com. Contact us at ESPN.eticket@
espn3.com
E-TICKET Archive
July 9-10:
Searching for Bartman

My Saturday with O.J.

By Graham Bensinger
Special to ESPN.com
You're probably asking yourself how an 18-year-old guy lands an interview with O.J. Simpson.

Why would the biggest celebrity defendant of the 20th century choose to sit down and discuss his career and his case with a reporter who just graduated high school a couple of months ago.

The first answer is probably persistence.

Our talk two weeks ago in Chicago was actually my second interview with Simpson. (Click here for a full transcript of the hourlong interview, or go to ESPN360.com to see the uncut video.) Before our initial meeting in February 2004, I called Simpson's representatives twice a week for more than 18 months in an attempt to land an interview. O.J. finally agreed because he seemingly appreciated my ambition and the radio show I had developed for ESPN Radio 1380 in St. Louis. If nothing else, I'm sure I irritated his people to the point of giving in.

Plus, Simpson knows I bring no preconceived notions to the table -- or at least fewer than the average American. Because I'm 18, I was not consumed by Simpson's criminal and civil trials a decade ago. I was in the second grade in 1994, and while I do vividly recall sitting around the kitchen table watching the infamous Bronco chase, I didn't understand its context or competently realize what was happening. I never saw O.J. play football at USC or in the NFL, and I don't even remember where I was when the verdict was read Oct. 3, 1995.

That's not to say I haven't done my homework on O.J.

Heading into that first meeting, I read every book I could get my hands on and canvassed the Internet doing research on the trial. I also became fascinated with everything that had transpired around Simpson since 1994.

I definitely developed reservations as to how O.J. would act. Would he be jovial? Would he be a pompous jerk? I had heard accounts of both, but I still wasn't sure what to expect.

There are so many faces of O.J. Simpson.

There is O.J. the football icon, winner of the Heisman Trophy at Southern Cal and Hall of Fame running back in the NFL. There is O.J. the broadcaster and actor, equally comfortable as an analyst on games or in front of the camera in "The Towering Inferno" or the "Naked Gun" movies.

And there is the image of O.J. that endures with most of America: the man who was tried for the murders of Nicole Brown Simpson and Ronald Goldman, a man eventually acquitted, yet still presumed by many to be guilty.

So, who is the Simpson that I have come to know?

He is cordial, engaging and -- one hesitates to say this -- pleasant to be around. But what shocked me even more than that was the reaction my initial interview had on others. I received both death threats and hate mail from people who were angry I would even give O.J. a forum. Clearly, the man still elicits emotion.

It's easy to disparage O.J. and make him look bad. He, however, has always been respectful and courteous to me, so I've tried to treat him the same. I view it as a test of one's character. When I was a guest on various national TV programs following that first interview, an anchor attempted to get me to make a derogatory remark about Simpson. I refused. To my surprise, Simpson watched my appearances, and the way I handled myself likely was another big reason why he agreed to sit down with me again.

There is one caveat I must explain. My recent interview was not conducted to gain insight into the events of June 12, 1994. The murders have been analyzed and reevaluated during the past decade to the point of exhaustion.

Simpson was acquitted by a jury of his peers in the criminal trial and later found liable in a civil case. The United States has a justice system for a reason. I don't feel the desire to profit from questioning this nation's legal system.

While virtually every other American was affected by his trials, the one person who shows few lingering effects is O.J. The man went from having nothing to an iconic status that included private planes, fast cars and penthouse suites. Now, he has come full circle.

Simpson is the type of person who, if you aren't careful, can lure you into his world and cause you to throw out any and all objectivity. His ability to captivate an audience certainly has not diminished since his days at NBC and ABC.

During the interview, I found myself trying to stare through his subdued eyes and laid-back nature. While he never shies away from a question, you still want more.

At times, I was confused by Simpson's incredulous laugh. It appeared unseemly, dubious, and while he might not have meant it, it was used to make light of extremely serious situations. He used that nervous, uncertain laugh while saying, "When I was a kid growing up, if you're black, I'd say you're going to jail. If you were a wealthy white, the odds were you weren't going to jail." Again he chuckled while recounting the story of a former Miami city commissioner who committed suicide.

All this made me want to dig deeper to gain entrance into what must be an exceptionally tortured world.

Both the evening before and the evening after our Saturday morning conversation, I spent time with Simpson. One would suspect, given his notoriety, that when venturing out in public, O.J. would disguise his identity with a hat and wrap-around sunglasses. In reality, he wears neither. He is easily approachable and genuinely seems to enjoy chatting with those who engage him.

As I walked around the hotel with him, it was apparent that he still carries rock-star status. This is no exaggeration. People close to Simpson say he's approached even more now than before the murders.

You've probably heard O.J. say in interviews that people continually come up to him and express their support. I initially dismissed that as wishful thinking, especially given the general public's overall views on the criminal trial verdict. It didn't make any sense.

I can tell you now that it's true. After both spending time with O.J. in public and speaking with his friends and confidants, it's blatantly obvious. During the time I spent with him, O.J. never got a negative reception. As one of Simpson's friends said, "Maybe one out of every 200 times he goes out." It didn't matter whether the person was young, old, male, or female, the reactions were all similar. People would approach and extend a hand, convey their support and ask how his two children were doing.

While it might not be an accurate measure of judging how people feel -- just as Simpson says about the cable news polls, "you have a skewed audience ... and in no way reflect what the general public is thinking," -- it's reality in Simpson's world.

Is O.J. Simpson a pariah? Maybe in some worlds of perception. But not in the one I entered. 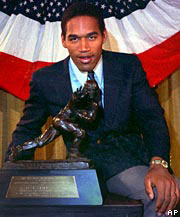 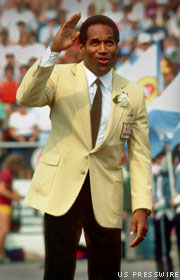 ESPN.com | Print | Send to a Friend