What is more important than life itself? For some, their family. For others, their religion. For many, love. For this group of obsessed ballers, it's a regular Saturday morning run that started in 1971 and continues to this day, a pickup basketball game that became their family, their religion, their first love. Don't you wish you felt that way about something?
BY ERIC NEEL
Photographs by Timothy Devine 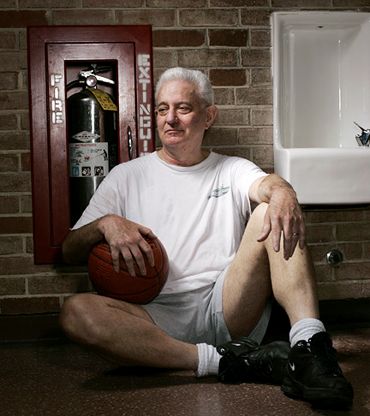 Dave, who has played in The Saturday Game since 1971, says, "I can't imagine my life without it."

played ball on my wedding day.

It was a closed game with friends who were in town for the festivities. We started at 8 in the morning, in a middle school gym in Kalona, Iowa. It was late June and steam-bath hot; guys were swigging Gatorade going up and down the floor, like runners hitting checkpoints in a marathon. I had a terrible day, short-arming everything on my way to an 0-for-8, I think, and was positively abused on the blocks by my old friend John. But still, it was beautiful. There was no place I'd rather have been. In fact, I was a little late to the ceremony after trying to squeeze in one more game that morning, and if you look closely, you can see I mucked up the pictures a bit with a fresh sweat line around my collar and a blotchy boiled pink in my cheeks.

This is the first thing I tell Dave, one of The Saturday Game originals, when we meet. The wedding day run is my most faithful gesture, my most devoted act. I offer it in tribute, and as a kind of shibboleth.

Dave knows a thing or two about faith and devotion. He's 65 years old, New York born and bred, and he has been playing in The Saturday Game, in the same grade-school gymnasium in New Rochelle, N.Y., just north of New York City, for 35 years. The Saturday Game began in 1971, and it's continued, from Labor Day to Memorial Day, every year since. Dozens of guys have played in that time, many for 20 years or more, and two of them for the entire run of the game.

"A lot of guys moved in and out over the years, but a lot of us played for a long time," Dave says in a slightly hoarse Bronx accent. "Guys grew up and grew old in the game."

Sixty-five isn't young, but Dave still sports a baller's body: broad across the chest, upright, long in the leg. He's chief administrator of a Huntington's disease unit, but even in the halls of the hospital, he moves like a shooter, sliding into spots, never looking hurried.

In the beginning, The Saturday Game was Kuppy, Ripp and Bob Edlitz. (I give you the names as the guys give them to me, as handles; some with nicknames, some with first names, some with last names, and some with both.) Ripp knew Elliott, and Elliott brought in Danny and Dave. Kenny, who's still playing, has been there almost from the start, along with Billy and Schiff. And Richie Glover, too. Sid came in a few years later. The Commish came on board about 28 years ago, through Sid, and Matty arrived soon after that. It evolved the way these things do: You'd invite a friend from the neighborhood or the job, or maybe you'd play pickup with a guy somewhere else, appreciated the way he played and asked him to join in.

It was just a game in the early days, just ball, a little safe harbor at the end of the week. But over time, Saturday by Saturday, game by game, it became a way to live, rules to play by, truths discovered, a creed, a kind of religion. "We've all been enthralled by our experience in it," Kuppy says. "The game, how you play the game, the people you play with, that's who you are."

The Commish comes to the gym one Saturday in his first year, 1978, and there are only seven guys there. The Commish is not happy. "Are we playing, or are we not playing?" he thinks. "Because if we're playing, let's play, and if we're not, what are we doing here?" The Commish, 5-feet-5 worth of bedrock shoulders and drill-bit gaze, is not to be trifled with. He's gonna shape up the ship. He makes a list of names and numbers, and he works the phones all week to make sure they'll have 15 come the next Saturday. And every Saturday after that. 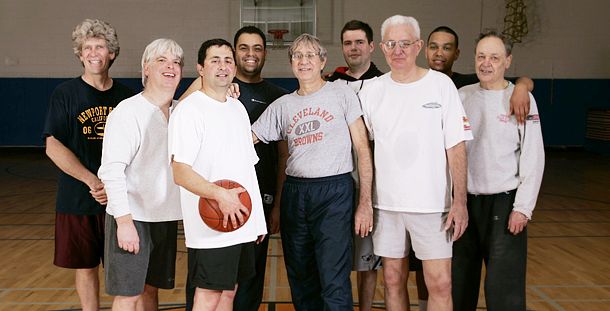 "Guys have grown up and grown old in this game."

"Sixteen's a mess," he says. "Fifteen is perfect; 10 on the floor and five waiting on winners." You want flow, you want to catch a blow between runs but not cool down, and you want everybody into it. Fifteen is what you want.

You can have a game without the list, but you cannot have The Saturday Game. The list is the shape and structure of the thing. The birth of the list is the moment when the game becomes an institution. The Saturday Game is not pickup, you see; it's plan, it's ritual, and a hallowed one at that. If you're on the list, you have a responsibility to lace up. If you're not on the list, you wait by the phone, high-tops on, hoping for the Commish to call and say, "We're short one this week."

A lot of the guys who play now once served time on the list. Jeff, the Commish's son, brought them in, one by one, over the years. "That call every week was make or break," says Amin, a 40-something regular with a bright, quick laugh who likes to roll off picks. "It was the difference between a good week and a bad week; it changed your whole outlook." Part of it is just the run, the sweat and bank shots leaching the workaday toxins from your system, but part of it is the belonging, too. Being in a closed game is like knowing the secret handshake; there's some blush of pride that comes with it, some keepsake buzz.

You don't wander into The Saturday Game. Walk-ups get turned away. Shorthand phrases and familiar tendencies are the coins of the realm. You know guys. Guys know you. "There's a comfort in it," Dave says. "You do something together, you're not talking about it maybe, but you're together in it." I know what he's getting at. Although it doesn't sound like much, it's kind of everything. It's why I risked the ire of my beloved and organized the wedding-day game. It's why the Commish sounds like the height of rationality when he tells me about the time he ran. 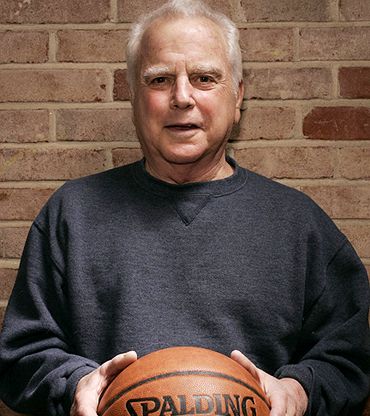 The Commish ran The Game from 1977 to 2005. Give him some space and he could nail his two-handed set shot from anywhere on the floor.

Someone, Kenny thinks it must have been him but can't really remember, brought a friend, an extra, to the gym one Saturday. No call to the Commish the night before to check on numbers, no warning at all. So there they are, loaded down, out of whack, trying to fit 16 pegs into 15 holes come game time. I get the story at Chef Ho's on Second Avenue, waiting on the hot and sour soup. It has been years, but the Commish, a little pink rising from his collar, smoothes out a wrinkle in the tablecloth like maybe a patch of flush white linen will erase the pain when he says, "I walked out." Jeff jumps in, laughing: "You didn't walk!" True enough. He ran. Out of the gym, down the hall, off the school grounds, and down the block. And down another block. And another. He kept running. He ran until the anger, the disgust, wound down, until he thought he could breathe again without wanting to spit or shout first. Thirteen miles he ran. Ran blindly. Ended up on some corner somewhere he'd never seen before. Panting and fuming.

"That's the Commish, right there," Kenny says, shaking his head in mock disbelief. Kenny's a lawyer, big-time firm in Manhattan. He has a scrapper's body, short and wiry. Keeps his face quiet, doesn't impress easily. And he's right about the Commish and the run: It's extreme, it's the act of a madman and we're all laughing about it when the soup comes. But I'll tell you what, it's the act of just the sort of madman you want on your club, in your game and on your side. The Commish had to give up playing last year -- he's 71 now, and his mobility ain't what it used to be -- but he speaks in the present tense when he looks at me straight, while the table's still cracking up, and whispers, "What do you want? I live and die for the game." I smile and nod; extremism in defense of The Saturday Game is no vice.