It's a blip in the historical record, but for an instant, for a single play, Joe Montana was freaking. His club was down by three, first-and-10 at the Cincinnati 35, with 1:22 left to play in Super Bowl XXIII, and he couldn't breathe. His head was spinning. He motioned to Bill Walsh for a timeout, but the 49ers coach waved him off. So he took the snap, dropped back quickly and heaved the ball out of bounds, hoping he could gather himself before the next play.

Forty-eight seconds and three completions later, as John Taylor clutched a 10-yard pass and a come-from-behind 49ers victory, the moment became a distant memory. Montana had gone 8-for-9 on an 11-play, 92-yard drive. The stuff of legend. But if the drive and the strike to Taylor are the height of Super Bowl glory, then that seized-up feeling in Montana's chest and the wayward ball he sent frantically out of bounds might be the essence of the game. "The pressure is suffocating down there; there's no air to breathe," says Steve Sabol, president of NFL Films and witness to all 39 Super Bowls. "You make a mistake or come up just short in the Super Bowl, and it feels like the end of the world." As Janet Jackson and The Fridge can attest, the Super Bowl is special. It commands the biggest audience. The longest pregame hype. The most intense analysis. And that's just the commercials. No other game, no other cultural event of any sort, really, compares. "The Super Bowl is the seventh game of the World Series, the NCAA championship basketball game, the Stanley Cup, the NBA Finals and a heavyweight title bout all rolled into one," says Lynn Swann, a former Pittsburgh Steelers wide receiver and four-time Super Bowl winner. "And actually, it's probably bigger than that." Everything you do, every move you make, is observed and recorded. "There's no hiding in that game," says John Riggins, the former Washington Redskins running back and the MVP of Super Bowl XVII. "Any of us who played in it are defined by it. The Super Bowl is when our legacies go from pencil to ink." For Riggins, Swann and Montana, the indelible word is Hero. They won the moment, they won the day, and even years later their memories still lift them up. But there are others -- talented players who wanted it just as badly, prepared just as fiercely, gave every bit as much, and were, in the end, equally defined by the game -- to whom the Super Bowl dictionary was not so kind. You likely have forgotten these men who came up wanting when they wanted it the most. Those, in some critical moment, who played the frustrated yin to another guy's triumphant yang. Their memories are more burdensome. Their word is Vanquished. Here are their stories ... 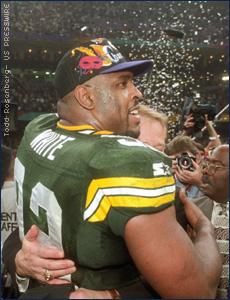 We remember the heroes from the past 39 Super Bowls, but we often forget the men whose dreams were vanquished by their greatness. 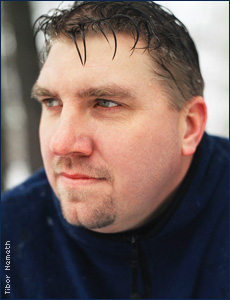 Max Lane is still haunted by his Super Bowl loss nine years ago.