Jade Lane was less than 100 yards from Pat Tillman when both U.S. soldiers were shot by friendly fire in Afghanistan on April 22, 2004. Tillman died on the scene after being struck by three shots to the head, while Lane returned home to cope with the memories of being injured by fellow Rangers.

Jade Lane is living in Las Vegas and feeling lucky. Searching the Strip for a top-money game, he ambles through the bustling casinos at the Wynn and Mirage hotels with a stiff gait, the result of a combat wound that has required three operations. It has been eight months since the 21-year-old Lane's four-year Army gig ended, and he's trying his luck as a professional poker player. Wiry, dressed in jeans and a casual striped shirt, Lane is quickly recognized by floor managers and card dealers as he enters a poker room. On his right wrist, he wears a black "KIA" bracelet with the name of a dead soldier: Spc. Patrick Tillman.

Mike Fish / ESPN.com
Even while playing for poker chips in Vegas, Jade Lane keeps a reminder of Pat Tillman around his right wrist.
Lane, also a specialist at the time, served alongside Tillman, the former NFL overachiever turned Ranger go-getter, as they hunted for Saddam Hussein in Iraq and Osama bin Laden in Afghanistan. On the evening of April 22, 2004, Lane was a radio telephone operator in the lead half of a split platoon, along with Tillman, part of a convoy in southeastern Afghanistan. In a recent interview with ESPN.com, Lane said he was positioned with the platoon leader, Lt. David Uthlaut, less than 100 yards up the steep ridgeline from Tillman, but with a clear view to the former NFL player and the other soldiers with him during a firefight. Lane survived it; Tillman did not. Like the one that killed Tillman, the gun that fired the bullet that ripped through Lane's left knee was triggered by someone in his own platoon. As the gun battle developed, Lane said he saw fellow Army Rangers waving their arms, signaling cease-fire, as the soldiers in first vehicle of the platoon's second convoy sped toward them and opened fire. He remembers seeing bits of rock and clouds of dust kick up as the rounds hit the ground around them. "Once the rounds started really impacting, first thing I remember is like everyone was laying [sic] on the ground," Lane recalled. "I don't know who it was, but I saw one dude, he was just laying [sic] on the ground with his face -- he looked like he was trying to bury himself in the dirt. That is the last thing I remember before I turned around and started running the other way." Maybe it was Tillman who caught his eye, or perhaps it was the teenage Ranger on the ridgeline with him, Spc. Bryan O'Neal. An Afghan Military Forces soldier who'd gone up the mountainside with the two Rangers was down, already dead as fire from the .50-caliber heavy machine gun and M-240 machine gun blasted the ridge. According to a November 2004 witness statement the Army released to Tillman's family, later obtained by ESPN.com, O'Neal confided to an Army investigator: "I figured I was going to die. I just wanted to curl up and not move, sir." O'Neal said he knew by then that it was friendly fire. Farther up the hill, Lane still had no clue that any of the rounds aimed at him were coming from the lead Humvee in the trailing half of the platoon, with Sgt. Kelly Sayer at the wheel and Sgt. Greg Baker to his side. Nor did Lane yet realize the pain in his knee had not been caused by a rock that kicked up but rather by a bullet that tore clear through his leg. In the bedlam, Lane said he didn't care about anything but staying alive. He moved as quickly as he could, dragging his bum leg as he lugged his automatic rifle and heavy equipment. The Army communications radio, the platoon leader's Sony Tough Book laptop computer, food and water, and a sleeping bag he was carrying weighed easily 20 pounds or more. Carrying all that U.S. Army-issued gear, he said, it isn't likely he resembled the enemy. As he stumbled in front of a mud wall near a handful of occupied homes, Lane glimpsed the Humvee on the road below. Though it seemed like an eternity since he first felt the dull pain in his knee, he figures in retrospect that it had been a matter of seconds. The vehicle was moving out, running parallel to him as he tried to get around the wall. He said he was sure the soldiers in the Humvee were American soldiers, but they were firing at other American soldiers. He said he recognized the sound of the .240-caliber machine gun positioned in the back of the vehicle and sensed it was taking aim in his direction. At the time, Lane said, he wasn't sure who was manning the gun, though later he identified the shooter as one of the soldiers who was dismissed from the Rangers after the Army's initial investigation of the incident. "I'm just thinking, 'Run! Get away from this,' " Lane told ESPN.com. "It's just kind of survival at that point. ... It was sort of hard to believe they were actually shooting at me. I wanted to believe that they were shooting over me, onto the ridgeline or whatever. The .240 [shooter] is mashing the trigger, and all these rounds are impacting on the wall beside me." For a split second, Lane said he contemplated returning fire. "It is so hard for your mind to figure out everything that is going on while it is happening," he said. "I was just, like, trying to figure out where I was getting shot from. And then when I realized it was coming from the vehicle, I was like, 'Well, now what am I supposed to do?' I'm thinking, 'Should I shoot back? Should I throw tracer rounds? Should I wave my arms in the air?' I don't think there is anything that didn't go through my mind, really." 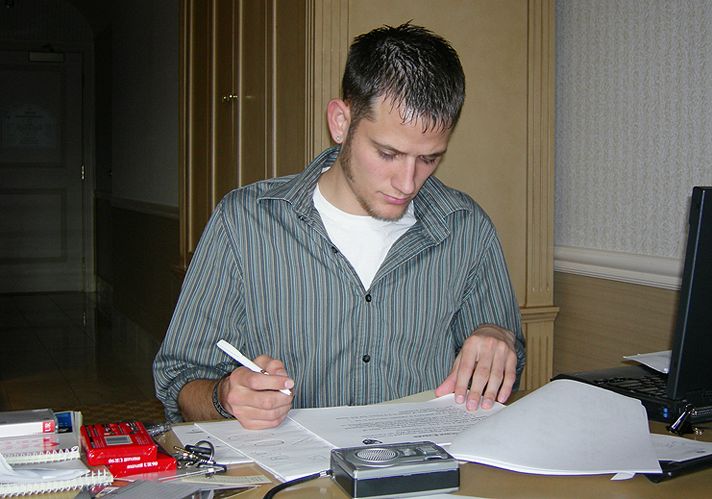 Mike Fish / ESPN.com
More than two years after the incident in southeastern Afghanistan, Lane is still looking for answers.
After the gunfire stopped and order had been restored, Rangers from the reunited platoon helped Lane and Uthlaut, who also had been shot, down the steep ridge to an open area by the road to wait for a helicopter to evacuate them to a hospital at Camp Salerno, the Army's forward operating base. Uthlaut, Lane said, was bleeding heavily about the face, spitting blood from his mouth. Not until the next day did Lane get word from a friend that Tillman had been killed. Later on that day, April 23, as the Army was preparing to hold a brief ceremony before it loaded Tillman's body onto a plane, Lane and Uthlaut came across Kevin Tillman, Pat's brother and a fellow Ranger in their platoon, outside the hospital. "I was on crutches and [made] my way outside,'' Lane recalled. "Me and the P.L. [platoon leader] were sitting there. We were drinking Gatorade or whatever. And Kevin just kind of walked up to us. And the minute I saw Kevin, I just lost it. The P.L. was the same way. It was kind of a bad situation. "[Kevin] couldn't even really talk. He just kind of hugged us both," Lane added. "We all just sat there for a little while. We made a little bit of small talk. He asked us how we were doing. We asked how he was doing, and what the plan was as far as getting Pat's body back and everything." The soldiers saluted Tillman as his body was prepared to be loaded onto a helicopter during the repatriation ceremony. Lane, too, was later placed in a helicopter for the start of a journey back to Madigan Army Medical Hospital at Fort Lewis, outside Tacoma, Wash. Off by himself back in the States and a world away from his unit while undergoing rehabilitation, Lane said he spent his days replaying the incident in his mind, wondering whether his memories were correct -- whether, indeed, his fellow Rangers had fired the shots that wounded him and killed Pat Tillman. When the rest of the Rangers redeployed to Fort Lewis a month or so later, Lane said he told Sgt. Eric Godec, Uthlaut's non-commissioned officer counterpart in the platoon, that he had identified the soldier who had fired at him along the Afghanistan ridgeline. "He said that [they] had already pieced together almost everything that had happened while they were still overseas and that they were going to take care of it in the next few days," Lane recalled. Godec, now assigned to Fort Benning in Georgia, declined comment for this story. The soldier Lane believes shot him could not be located by ESPN.com. A few days later, at Fort Lewis, Army brass dismissed everyone in the Humvee from which the shots were fired except Sayer, the driver, from the Rangers and reassigned them within the regular Army. The punishment proved unpopular and contentious, Lane said. The Rangers had been gathered for a reassessment of the incident that included a PowerPoint presentation that depicted where they had made mistakes and how the operation should have unfolded. After the battalion commander and the disciplined soldiers left the conference room, Lane said, a sergeant major asked how many of the remaining Rangers thought the punitive measures were too harsh. "I was the only one in the room that didn't raise [a] hand," Lane said. "I guess they really believed that this was totally an accident and everybody in the platoon still deserved to be in the platoon." Lane said he is still bothered that the shooters weren't punished more severely. "If there is anything you deserve to get fired for, that has got to be it," he said. 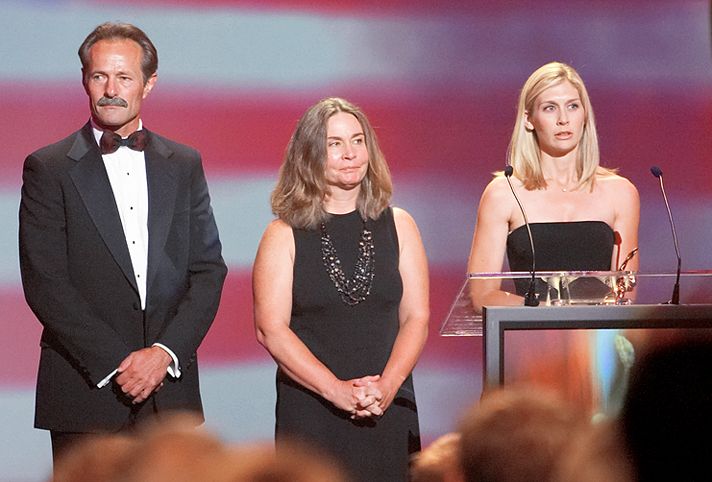 AP
Pat Tillman's father, Patrick, mother, Mary, and widow, Marie, have not been satisfied by the government's investigations. Lane says he doesn't know how anyone can tell the family, "Oh well, it was an accident."
"I don't see how they tell that to the Tillman family, like Kevin and Marie [Pat Tillman's widow] -- 'Oh well, it was an accident,' " he said. "It is awful. I don't have a punishment in mind. I don't know what they could do to them. But definitely, I think they should have at least got some kind of [punishment] that would have made sure that for the rest of the time they are in the military they don't get put in any sort of combat situation ever again. "I don't think they should ever be allowed to touch a weapon again," he said. For his injury, Lane was awarded a Purple Heart. A photo of Lane shaking hands with President Bush at the rehabilitation hospital hangs on the wall of his home office, where he plays online poker. He has a presidential coin, too, from Bush's visit. They're all reminders, along with the slight hiccup in his walk, of the night of April 22, 2004. "I understand that mistakes can be made," he said, "but it is a little easier for me to be a little more forgiving because I am still alive." Mike Fish is an investigative reporter for ESPN.com. He can be reached at michaeljfish@gmail.com.