David Uthlaut graduated at the head of his class at West Point and marched in President Bush's inauguration parade in 2001. He had never lost a soldier under his command ... until the day Pat Tillman was killed by friendly fire in southeastern Afghanistan. Uthlaut also was shot on April 22, 2004, and the platoon leader now calls coping with the aftermath of the incident "the hardest thing I've ever had to deal with."

Growing up, he was the All-American boy: the popular student council president, a soccer and wrestling star with chiseled good looks, an all-around nice guy. It sounds like Pat Tillman, but guess again.

U.S. Military Academy
As first captain at West Point, David Uthlaut marched in President Bush's 2001 inauguration parade.
Meet David A. Uthlaut, who graduated at the top of his class at Middleton High School in Charleston, S.C., and landed a prized appointment to the U.S. Military Academy on a nomination from Sen. Strom Thurmond. At West Point, Uthlaut rose to the top of his class, too, and was named first captain, a distinction earned earlier by military giants William Westmoreland and Douglas MacArthur. In 2001, he led the Army's procession in President Bush's inauguration parade down Pennsylvania Avenue in Washington, D.C. Uthlaut seemed destined for great things. In December 2003, Uthlaut, then a lieutenant in the Army's special operations forces, crossed paths with another high achiever. As the Rangers trained at Fort Lewis (Wash.), in preparation for their deployment to Afghanistan, he welcomed brothers Pat and Kevin Tillman into the 2nd Platoon, A Company, 2nd Battalion, 75th Regiment, otherwise known as the Black Sheep.. In a series of interviews with ESPN.com, Uthlaut said he came to appreciate the Tillmans almost immediately. They were older than most of the Rangers, and they were bright, interesting college guys. Pat became a de facto team leader with the easy self-confidence to take new, teenage soldiers under his wing. At one point, Uthlaut said word came from high up the Army's chain of command the Tillmans would be offered entrance to Officer Candidate School. But when he broached the subject with the brothers, they were not interested. "Some would view officers as the glamorous job of the Army that get the recognition and all that, and it is the enlisted men who do the dirty work in the trenches," Uthlaut told ESPN.com. "I think both of them kind of relished that role -- 'We're not in this for the glory.' Pat was never in it for Pat. He was in it because he believed in serving our country. Kevin was the same way. So they weren't in it to climb the ladder." Uthlaut also said Pat Tillman, because of his NFL celebrity, had the opportunity to be a marketing tool for the Army, taking a cushy office gig working with promotions and advertising folks. But he wasn't interested in that, either, according to Uthlaut. "He didn't see himself as the poster boy," Uthlaut said. "He didn't want any of [the attention]. Suffice to say, Pat himself wouldn't want as much made out of [his death] as it has. He signed up. He agreed basically to the fact that, you know, 'I could be killed overseas.' Unfortunately, part of the job is to go in and destroy. As leaders, we try to prevent unnecessary tragedies like Pat, and accidents, but [it's] part of the job." 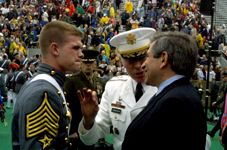 U.S. Military Academy
A high achiever throughout his Army career, Uthlaut remains haunted by the events of April 22, 2004.
When the firefight broke out in southeastern Afghanistan that April evening in 2004, Uthlaut, then 24, and Tillman, 27, were positioned less than 100 yards apart along the same desolate ridge. Uthlaut, the platoon leader, was by a mud wall outside a tiny village. Like Tillman, Uthlaut was shot by his own men. His face was bloodied by shrapnel, and he caught fragments in his left arm and leg and upper back. He was taken to a military hospital at nearby Camp Salerno. He wasn't officially told Tillman's death had been a case of friendly fire, or fratricide, for 10 days. The young leader said he was devastated, and told ESPN.com the incident was "the hardest thing I've ever had to deal with." Tillman was the first soldier under Uthlaut's command to be killed in action, and the impact of his death was compounded by the news Tillman had been killed by other soldiers under Uthlaut's command. Uthlaut was reluctant to discuss the details of the firefight with ESPN.com. But interviews with other soldiers in the field, as well as transcripts from Army investigations released to the Tillman family and obtained by ESPN.com, show Uthlaut argued against a company commander's order to split the troops just before the shooting began. In the end, though, the incident cost Uthlaut his position in the Rangers, though he wasn't demoted or dismissed from the Army. Because of his injuries, he was awarded a Purple Heart when the platoon returned to Fort Lewis; but it was given to him without the customary formal ceremony. "Well, leaders take responsibility," Uthlaut told ESPN.com, sounding very much like a West Point-trained soldier. "That's what they do. It's what I have done. I was the ground force commander. Anything that happens below me on the ground is technically my responsibility. If there were some personal judgment errors from shooters on the ground, their training, their level of proficiency belongs on my shoulders, as well. Their training at Fort Lewis, or just making sure that proper control measures were in place during the firefight. That stuff comes back on me. "So the bottom line is a fratricide should never happen. And it did. There are a lot of extenuating circumstances; but as the leader on the ground, you have to take responsibility for it." Uthlaut first spoke with ESPN.com about Pat Tillman and the fallout from his tragic death early this spring. He was at Fort Benning, finishing up a five-month infantry tactics course for rising company commanders and living in an upscale apartment complex on the outskirts of Columbus, Ga.., a 15-minute drive in his black sport utility vehicle to the base. Uthlaut answered the door early one night wearing green khaki cut-off shorts, a black T-shirt and flip-flops. The apartment was sparsely furnished, nothing adorning the white walls. The kitchen table was covered by several large maps, which Uthlaut said he was using to study an actual operation that had occurred in Baghdad. For the next two hours, he spoke in careful tones -- at times, his voice cracked -- about Pat Tillman and his own personal struggles with guilt about Tillman's death, about the friendships and religious convictions at the core of his coping skills, and about the occasional flashback that comes over him while he's out on long training runs. 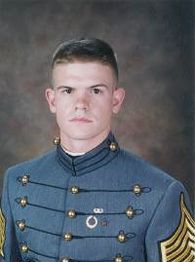 U.S. Military Academy
"The bottom line is a fratricide should never happen. And it did," Uthlaut says. "There are a lot of extenuating circumstances; but as the leader on the ground, you have to take responsibility for it."
"It was very hard overseas, especially when I didn't know all the details of what happened," Uthlaut said. "And once everything was being sorted [out] -- trying to figure out what had happened to him and all that -- that was a very difficult time for me." Asked about the effect the firefight has had on his career, Uthlaut said, "I don't want to talk about it." Like almost 90 percent of his West Point graduating class, however, he was promoted to captain in November 2004, seven months after Tillman's death. Uthlaut visited Kevin Tillman and Pat's widow, Marie, after he returned from Afghanistan late in the spring of 2004, just before he deployed to Iraq. They met in Tacoma, Wash., where the brothers had kept a house while they were stationed at Fort Lewis. He also wrote and e-mailed Pat's mother. About reaching out to Marie Tillman, Uthlaut said, "That was something that I felt the need to do. I can't speak for the Army or what other people do. Her husband had died under my command. I just wanted to talk to her, tell her as the leader on the ground that I felt responsible; and I apologized to her for that. I just wanted to make myself available, as she is the wife of one of my soldiers, and that she could come to me if she had any questions or wanted to talk to me." Marie Tillman works for ESPN, but declined to be interviewed for the story. Unlike some in the military, Uthlaut said he understands the Tillman family's anger and unwillingness to accept the Army's findings without question. And he says he is not upset about the series of investigations still lingering more than two years after Pat Tillman's death. "I want for his parents to be satisfied," he said. Uthlaut said the comfort provided by his family and his friends in the military, including some old classmates from West Point, guided him through his own stormy days. He acknowledged having moments when his mind spun with uncertainty and he'd wonder aloud, "Why is this happening to me?" What peace he has found, he said, is rooted in his Christian faith. In an e-mail to ESPN.com later this spring, Uthlaut wrote, "I truly believe that God has known every detail of my life -- and of the lives of all humans -- since before I was even born (reference Psalm 139:15-16). I also believe that He has an intricately woven plan for the events that occur on earth, and I believe His plan is perfect. For those whom God has chosen, this plan will work out for their good and for His glory, whether they can see it that way at the time or not (reference Romans 8:28). "While I take responsibility for my own actions and the actions of my former platoon, and I often think about what I could have done to prevent things from turning out how they did, I believe that all of the events that occurred were meant to happen in the way they did. Knowing this, I do not beat myself up about the situation, and I am able to move on with my life." Asked how Pat Tillman might have reacted to his convictions about predetermination, Uthlaut wrote: "Pat struck me as a man of strong moral character; he always did what he thought was right, he put forth maximum effort to overcome any challenge he encountered, and he had unquestionable integrity. "Seeing that character manifested in him, I asked Pat at one point if he had a religious background, but he assured me that he did not. Based upon that response, I'm sure he would disagree with my faith-based beliefs, but I could not speculate as to what specifically he might have said about them." Mike Fish is an investigative reporter for ESPN.com. He can be reached at michaeljfish@gmail.com.