BY BRINGING LeBron James back home to Cleveland, the Cavaliers won the heralded 2014 offseason -- and that was before today's news that the Cavs have reached an agreement to acquire Kevin Love (although the trade won't become official until August 23). But now the real work begins as rookie NBA coach David Blatt attempts to mold this team into a winning outfit for the first time since, well, the King's departure in 2010. The fact that James is the NBA's best and most versatile player gives the squad a host of options, but Blatt still needs to figure out what he has -- and, more important, what he doesn't. Here are six tasks awaiting Blatt & Co. that will determine the Cavs' fate.
1

The Cavs' biggest strength last season? Defensive rebounding. The team grabbed 75.8 percent of opponents' misses, sixth best in the NBA, despite a trio of wings who contributed little to the cause: C.J. Miles (10.1 percent DRB rate), Luol Deng (12.2 percent) and Alonzo Gee (12.8 percent). Those three are gone; James, with his 18.8 percent rate, slots into their position. Now he'll team up front with Love (29.8 DRB%, second in the NBA among players who averaged at least 20 mpg) and Anderson Varejao (28.6, seventh). In other words, it's not a stretch to imagine the Cavs as the league's best rebounding squad. 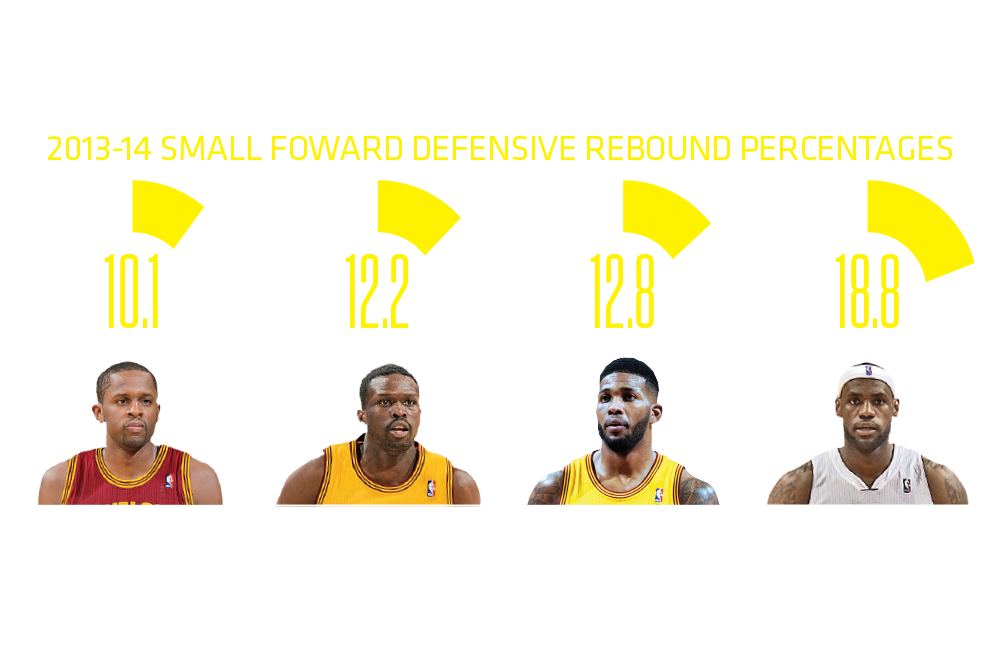 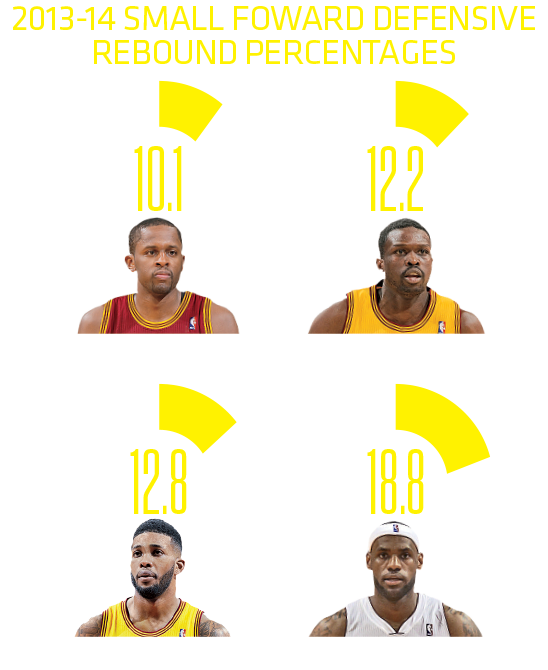 And after all those defensive rebounds? The Cavs want to run. Although the team ranked just 18th in pace last season, PF Tristan Thompson and PG Kyrie Irving were above average in transition play, ranking in the 87th percentile and 67th percentile, respectively, according to Synergy Sports. And they'll certainly be better with James. "LeBron is as good in transition as you can possibly be," says Cavs GM David Griffin. Last season he was in the 88th percentile with 1.32 points per play in transition. Plus, the Cavs will now have Love fueling the break with his signature outlet passes, then serving as a perfect trail option. With Minnesota last year, Love averaged 1.29 points per play in transition (85th percentile), including 1.44 PPP as the trailer, ranking in the 87th percentile. Not bad. 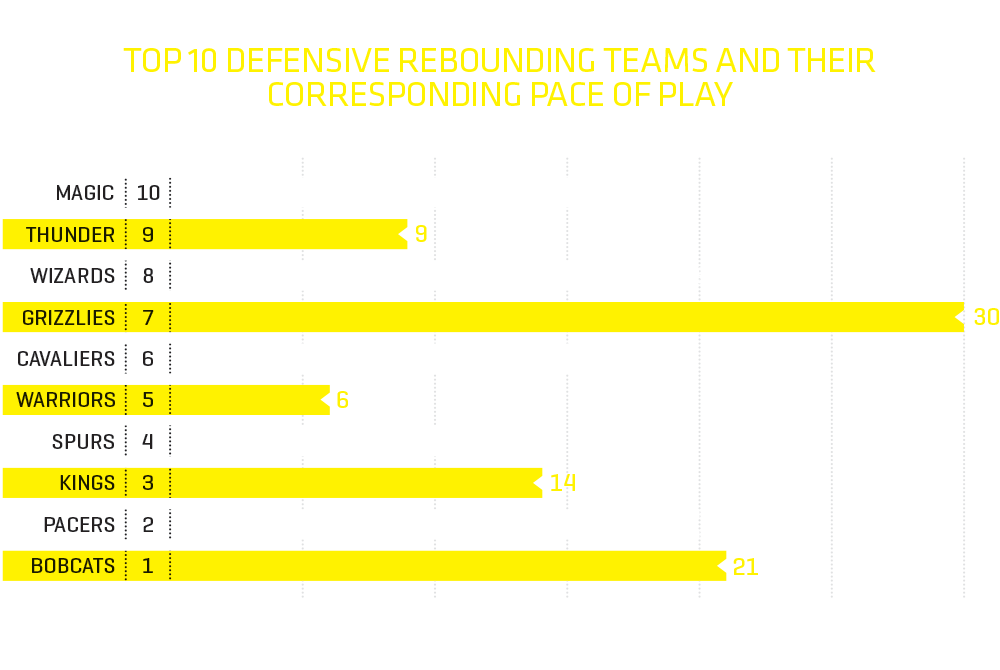 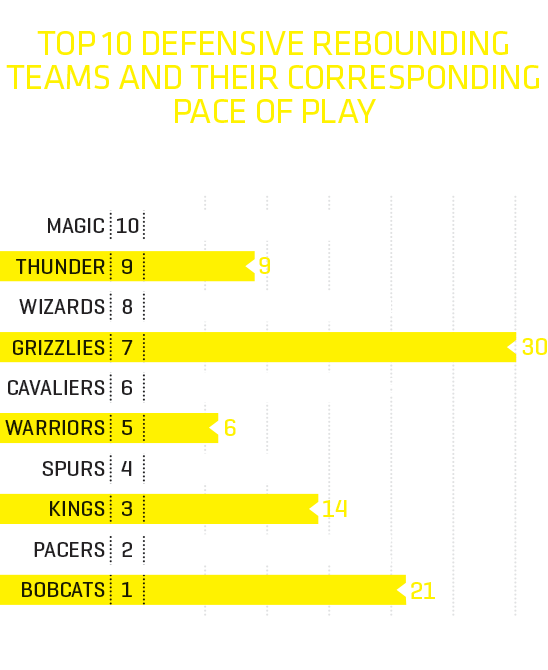 Popular opinion says SG Dion Waiters is a ball stopper who can't coexist with Irving. But dig deeper and another tale emerges: He should pair very well with James. To excel alongside LeBron, wings must drain open shots or attack off the dribble when the King draws the defense. Waiters can do both. Last season he was in Synergy's 82nd percentile by averaging 1.19 PPP on catch-and-shoot jumpers, including a 43.4 percent stroke on such 3s. "It's a very underrated part of his game," Griffin says. Playing with James, it might not be much longer. 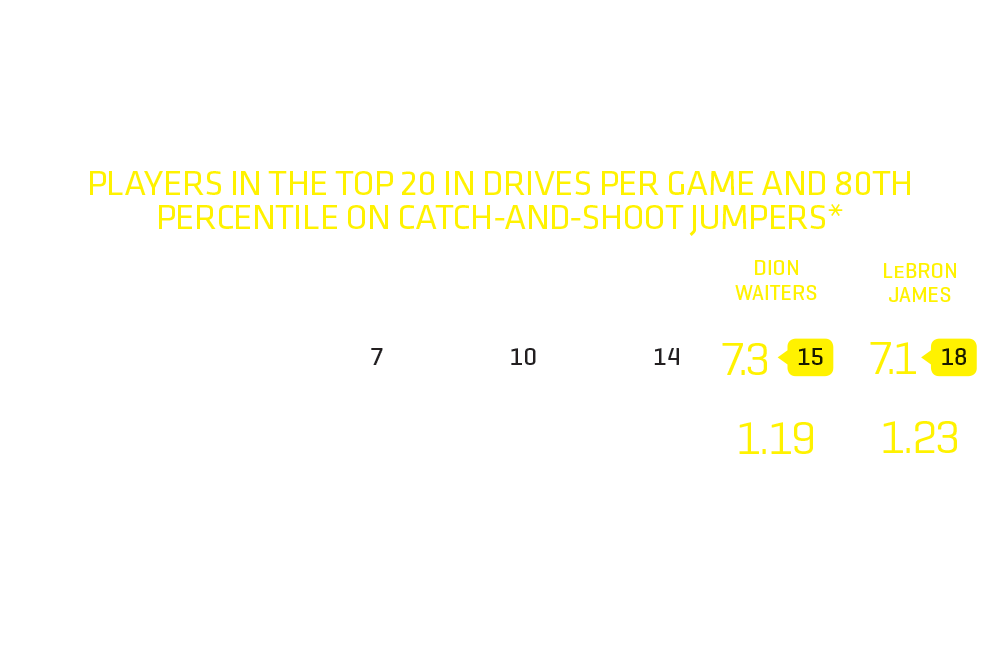 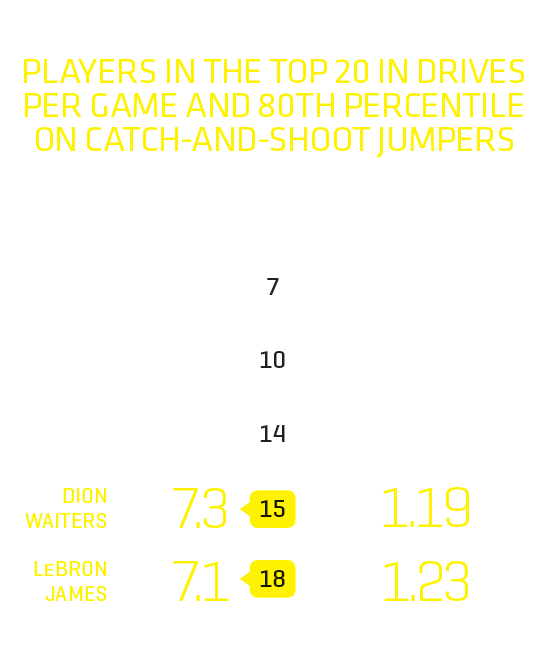 ... Then make them more efficient.

James will not be the Cavs' only facilitator, of course. There's also Irving, who assisted on a solid 31.1 percent of field goals last season, the same rate James had in Miami. And teams with multiple playmakers tend to be more successful. Look at the Finals: Both squads just missed cracking the short list of teams (two) having 30 mpg players with assist rates greater than 25 percent. The Cavs could be a deadly drive-and-dish team, with James, Irving and Waiters all in the top 23 players in drives per game.* Says Hawks coach Mike Budenholzer, a ball-movement disciple who spent years as a Spurs assistant: "If you just hold it, you've lost the advantage, and now you're just playing one-on-one."
*Minimum 50 games played. 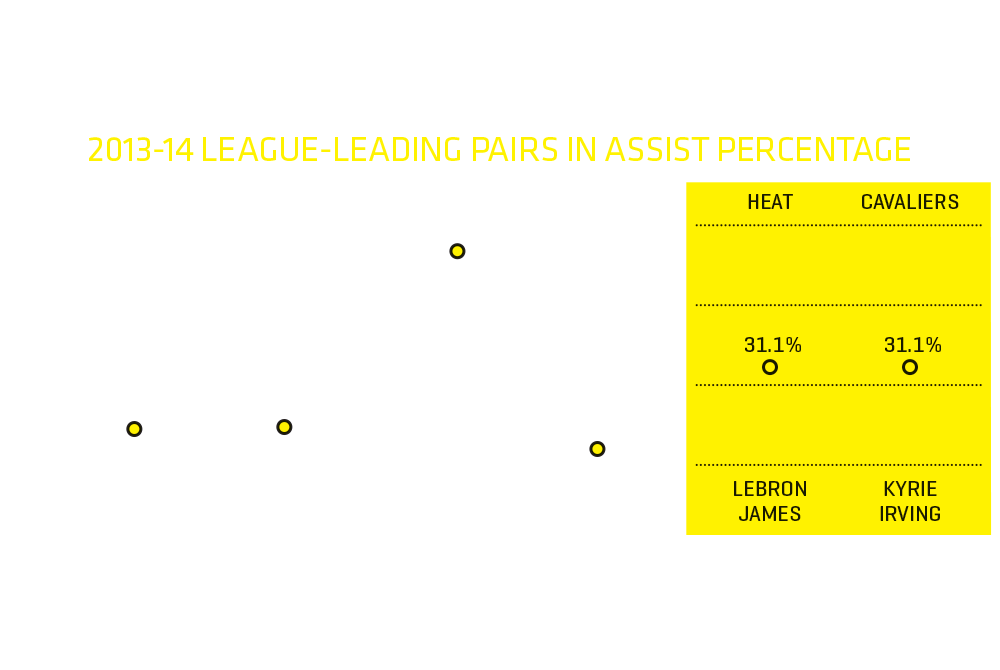 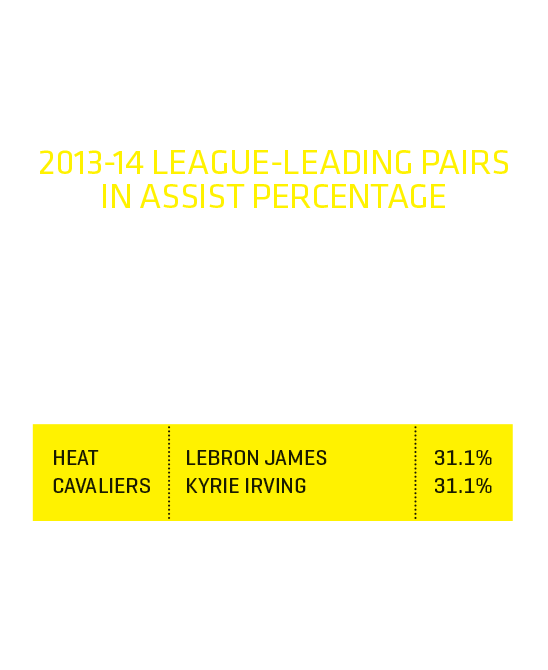 To seal off those lanes, opponents might load up inside. So while the additions of Mike Miller and James Jones should improve the Cavs' spacing, the team still badly needed frontcourt shooting after losing Spencer Hawes, who signed a $23M deal with the Clippers. Enter Love, the league's top stretch 4. Last season, he made more 3s than any of the Cavs' current bigs attempted, so landing him isn't just about adding another All-Star. He fits too. 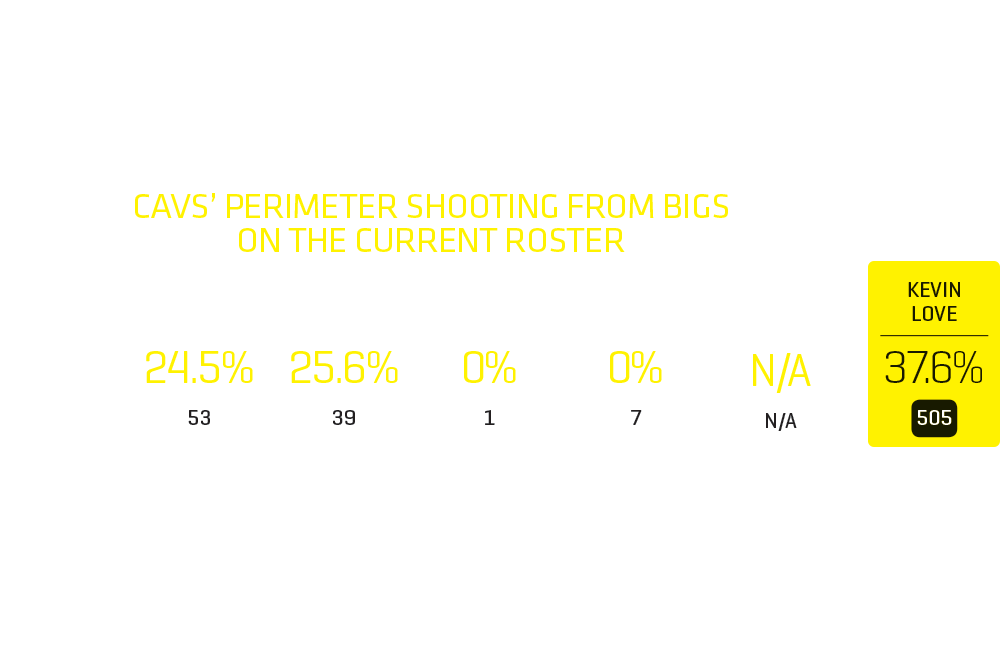 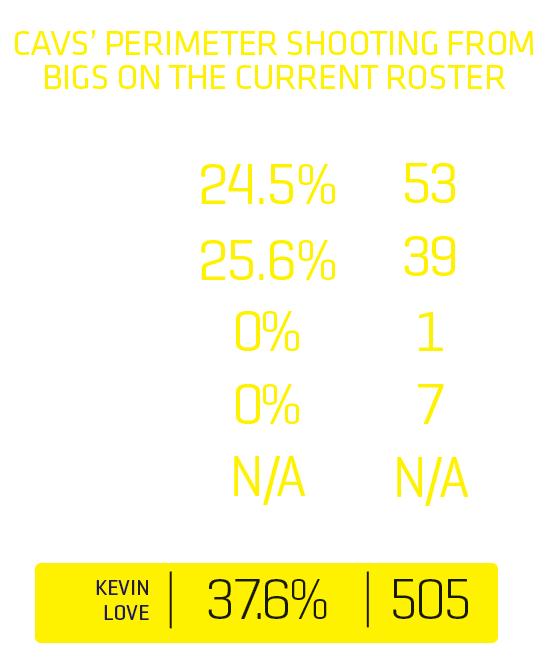 ... But realize that may take time.

Even the King can't solve every problem. The team's frontcourt is completely devoid of shot-blocking -- no player on the current roster averaged even a block per game last season. That includes Love, who offers little in terms of rim protection (he allowed foes to shoot 57.4 percent at the rim last season, and blocks just half a shot per game). To compensate, Cleveland packed the paint, which kind of worked: Opponents took the fewest shots from within five feet, just 25.7 per game. The trade-off came behind the arc, as the Cavs allowed a league-record 25.4 attempted 3s per game. The team might not find a true rim protector until next summer, but even if the interior defensive woes continue, the Cavs will be more than fine. They've still got the best player in the world, and a pair of young All-Stars to flank him. 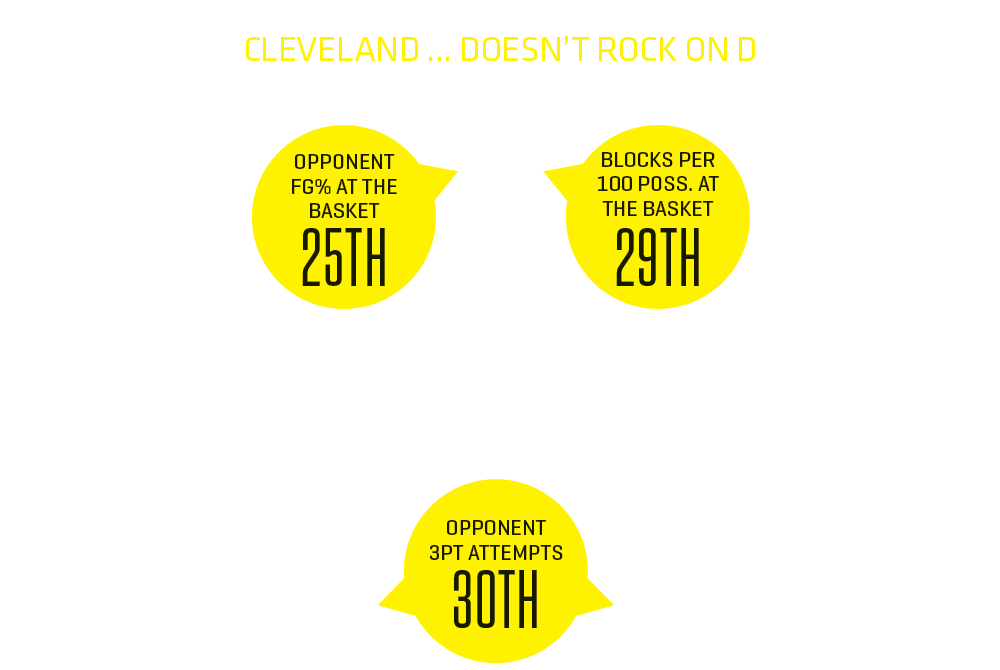 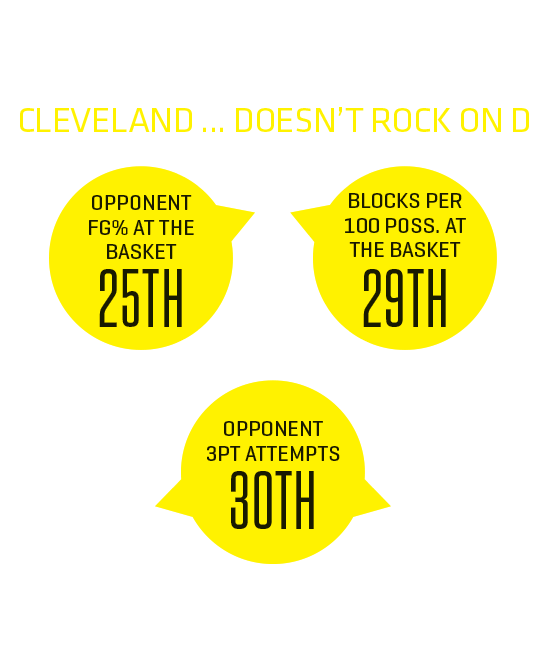