Tennis fans are drawn to the swing - but experts keep an eye on the feet. That's because everything about strategy starts with footwork, from the way Rafael Nadal barricades himself behind the baseline to Roger Federer's fast-moving attack. But unlike an NFL post route, tennis efficiency isn't about limiting steps. "If these guys are using their legs, they're forcing the other guy to take risks," says ESPN analyst Darren Cahill. To help us measure how much the ATP's top four players move-and what it means for their games heading into the U.S. Open (Aug. 25 to Sept. 8)-The Mag asked the brains behind Hawk-Eye, the camera system that tracks ball movement at tournaments, to develop a new distance-based metric. The result: distance run per point, or DPP. Here's how it works and what it reveals. - ADDITIONAL REPORTING BY JEFF GOLD
1

The Stat That Gets To The Point

After tracking every point over the past four grand slams, Hawk-Eye found that, on average, Novak Djokovic ran 6.5 percent more per point than his rivals, while Federer ran 17 percent less. No shock there. Djokovic likes to extend points with defense, while Federer tries to shorten them. But surprisingly, Djokovic ran the most on New York's fast courts, not Paris' slow ones. 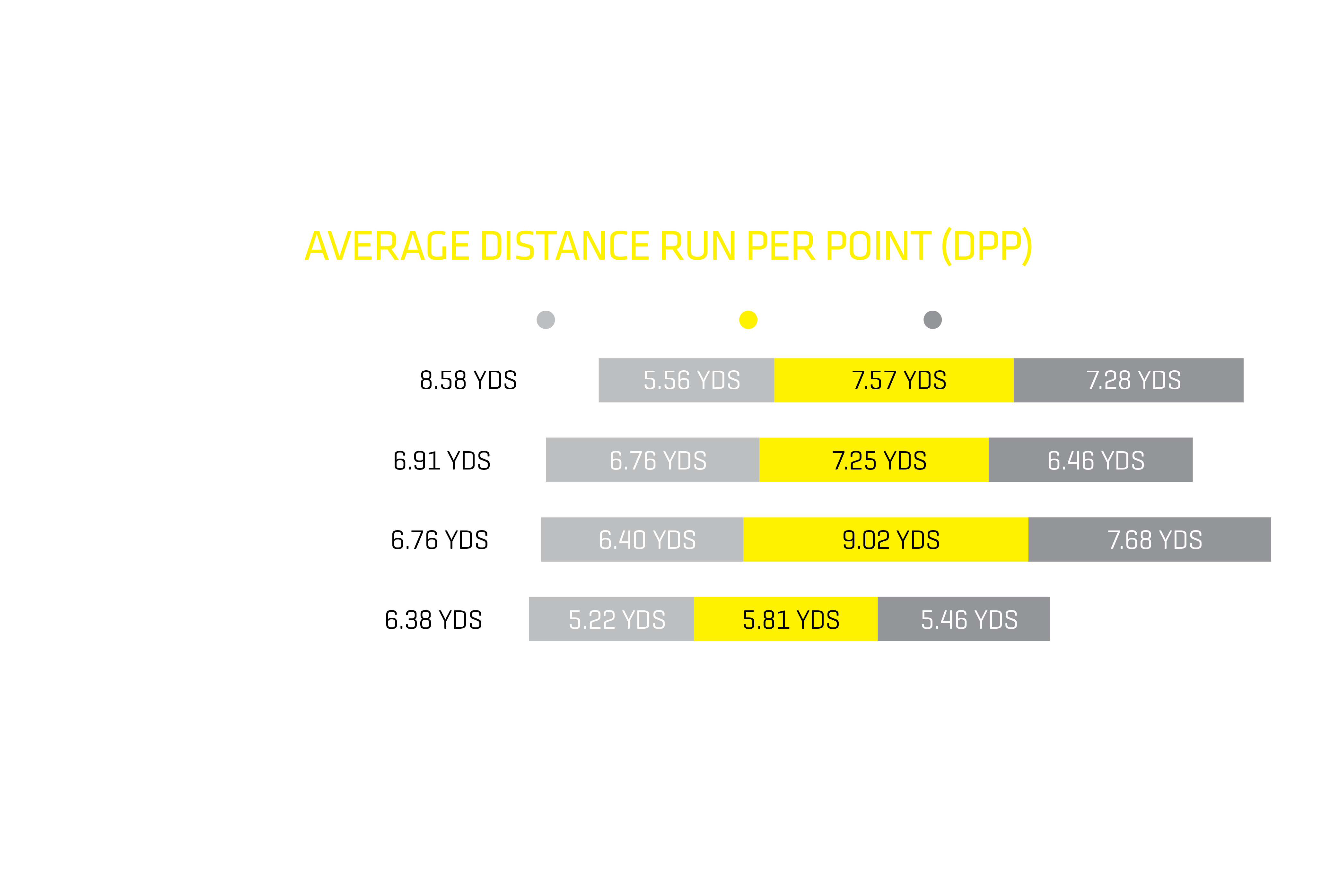 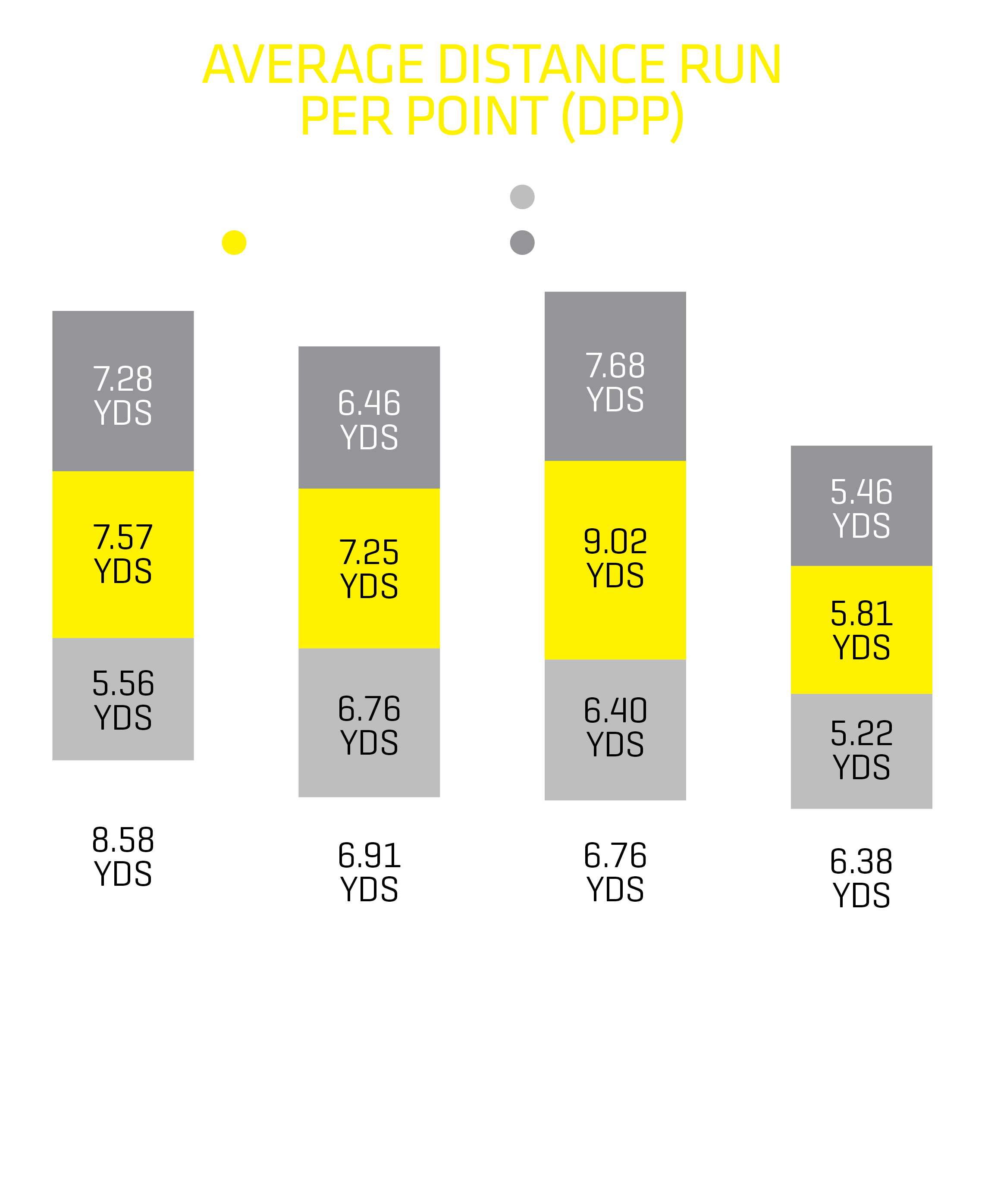 Stan Wawrinka's DPP stats show that he plays fairly compact points. The problem is, he plays a lot of them! That's what we discovered when we calculated the average distance run per match (DPM) at the Open. Even excluding his marathon semifinal vs. Djokovic, Wawrinka played 26 percent more points than his top rivals and ran 456 extra yards per match. 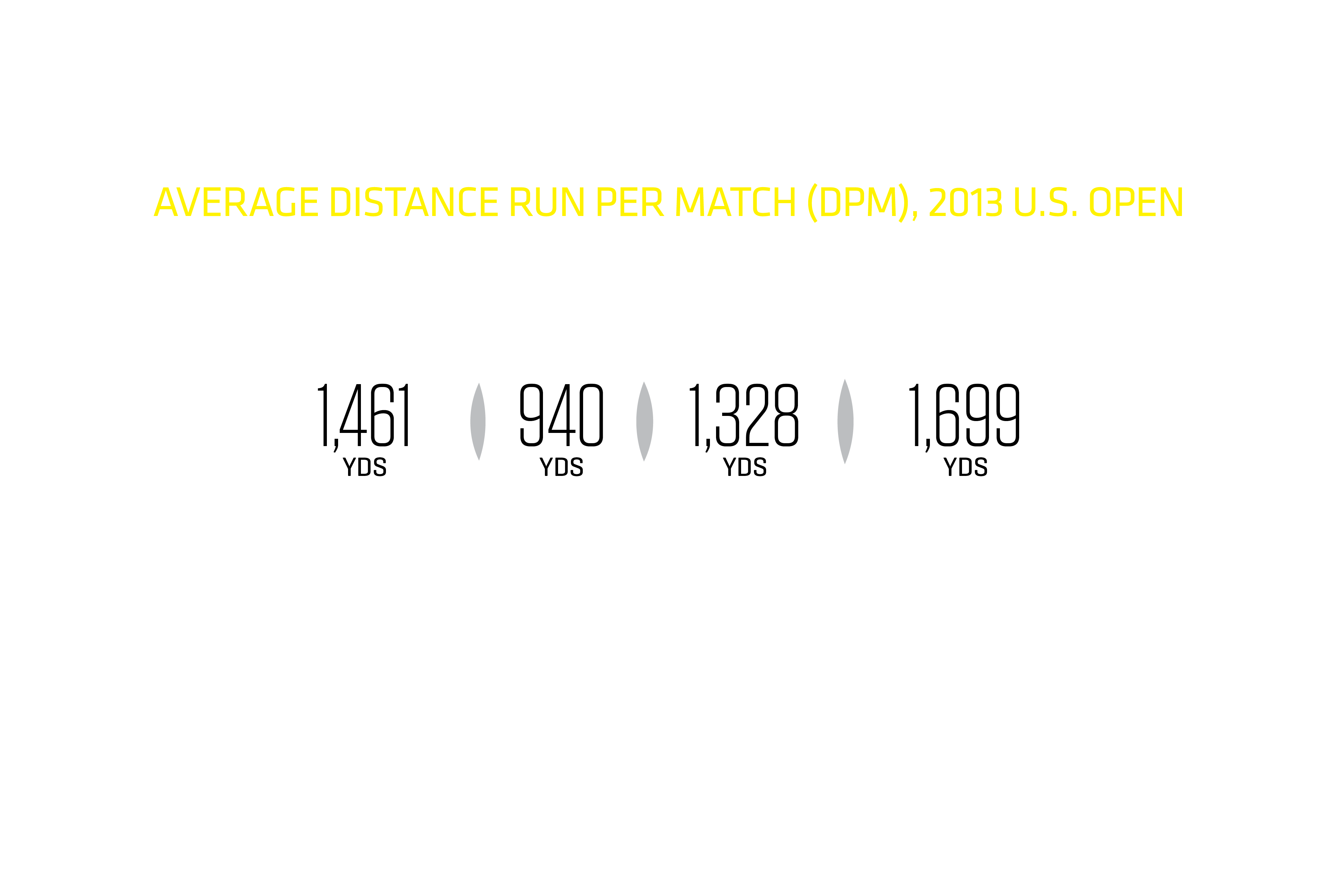 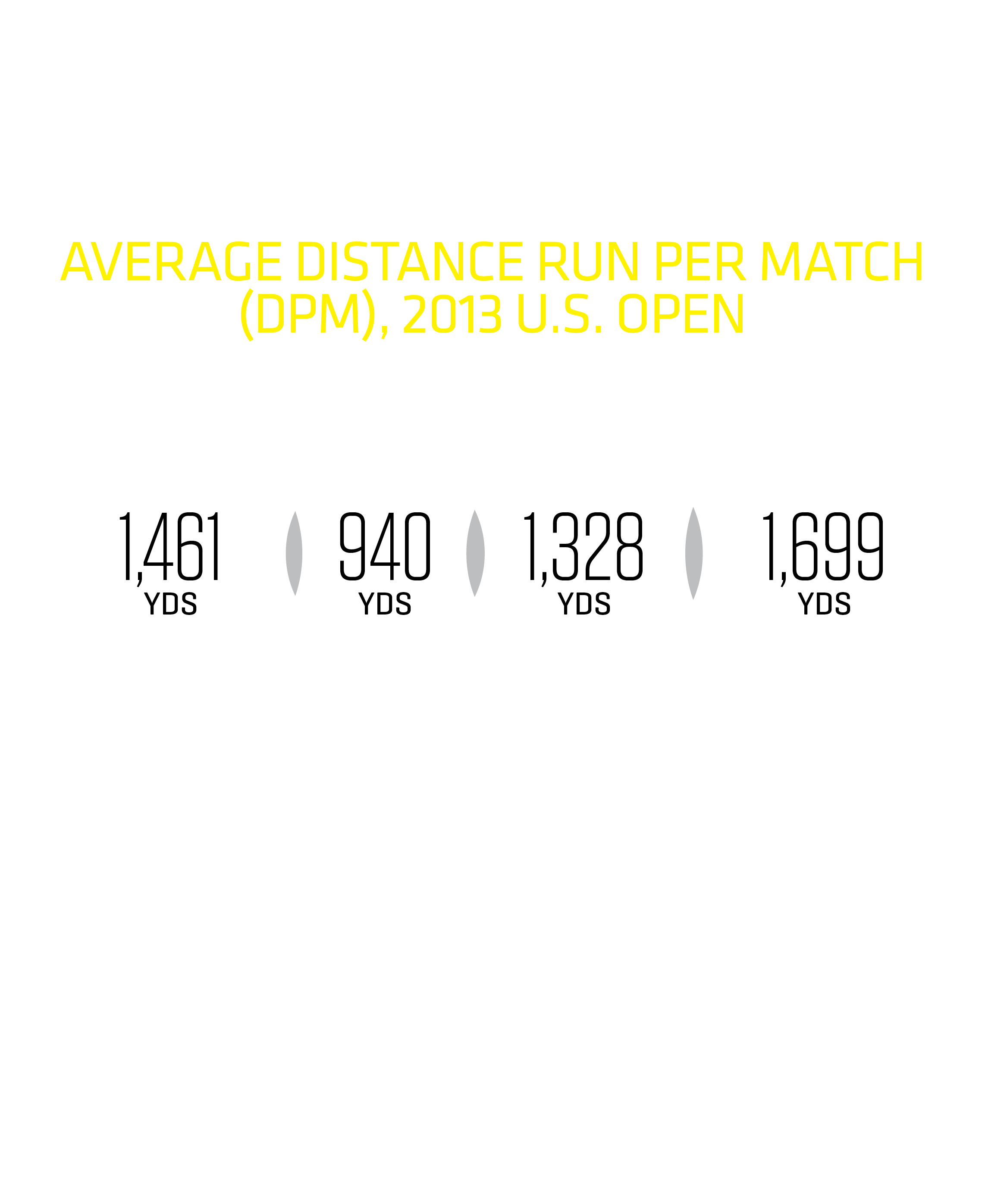 About That Semifinal Slog ...

The Djokovic-Wawrinka U.S. Open semifinal was the most grueling match of the past year. Djokovic (near right) had to run 87.8 percent more than his tournament average to beat Wawrinka (far right) 2-6, 7-6 (4), 3-6, 6-3, 6-4 in the four-hour epic. That he pulled it off was a testament to his resolve. But understandably gassed two days later, he lost the title to Nadal, who had run a tournament-low 789 yards in his second-round match against Rogerio Dutra Silva. 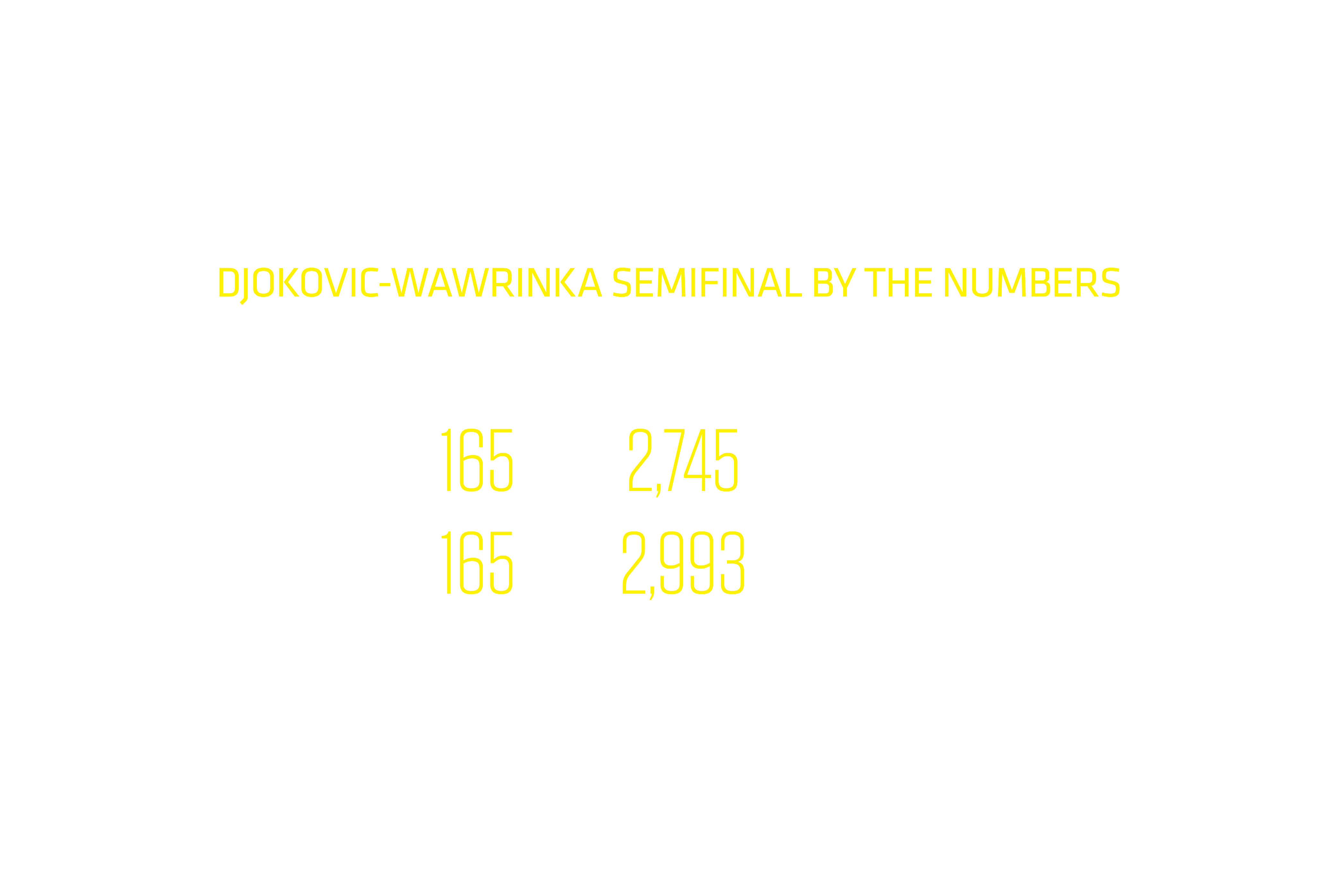 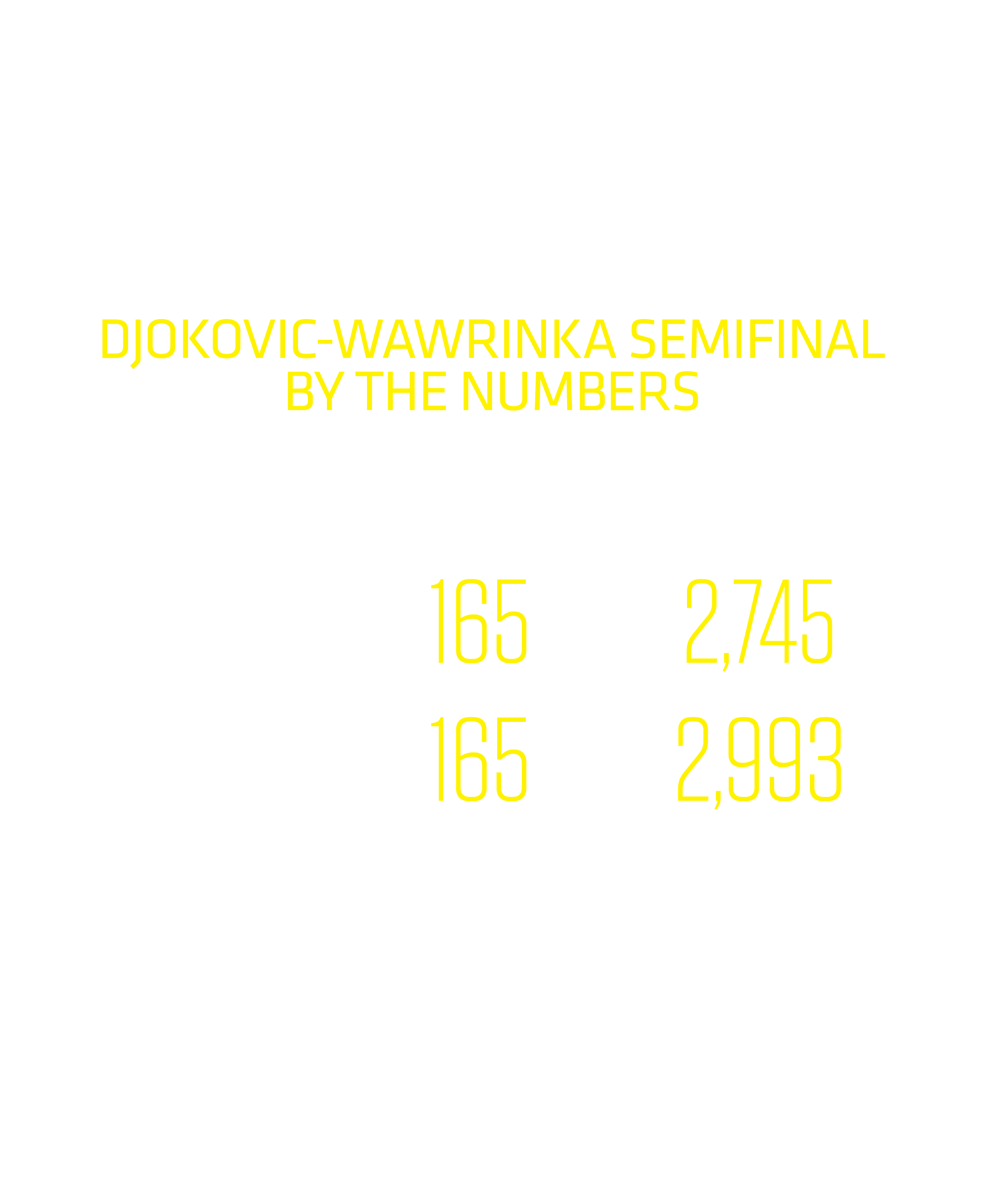 The Showdown We're Waiting For

Federer and Nadal have never faced off at the Open, but if they do, it will be a battle of enduringly contrasting styles. Nadal takes a longer swing and runs 36 percent more than his rival, with a 7.57 DPP. Federer's 5.56 DPP last year was a good sign (despite an early exit)- he plays best when he keeps points and matches short. Says Cahill of Federer, "You feel like you're rushed into every shot against him." So if the two do meet, keeping a low DPP will be Federer's key to success. 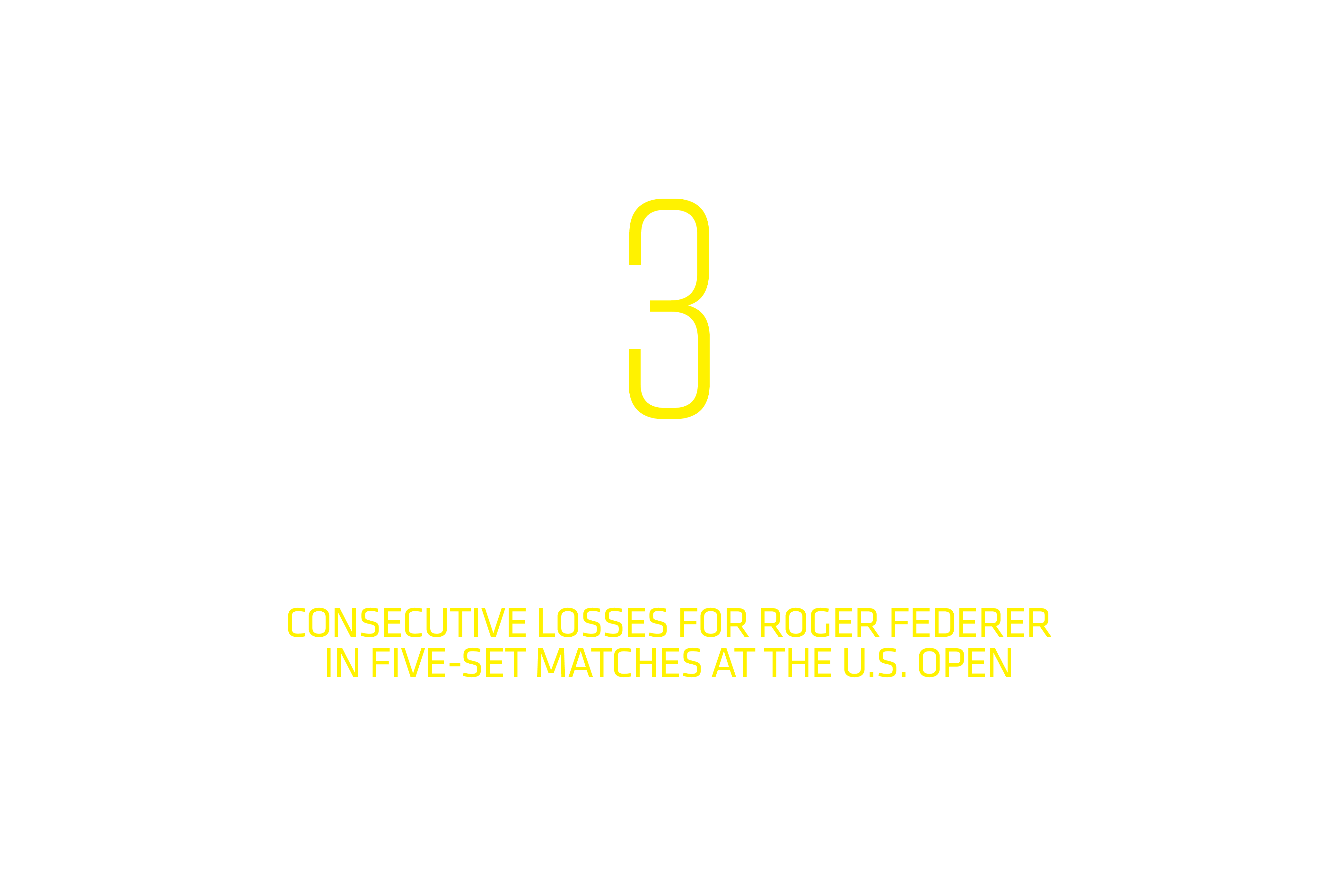 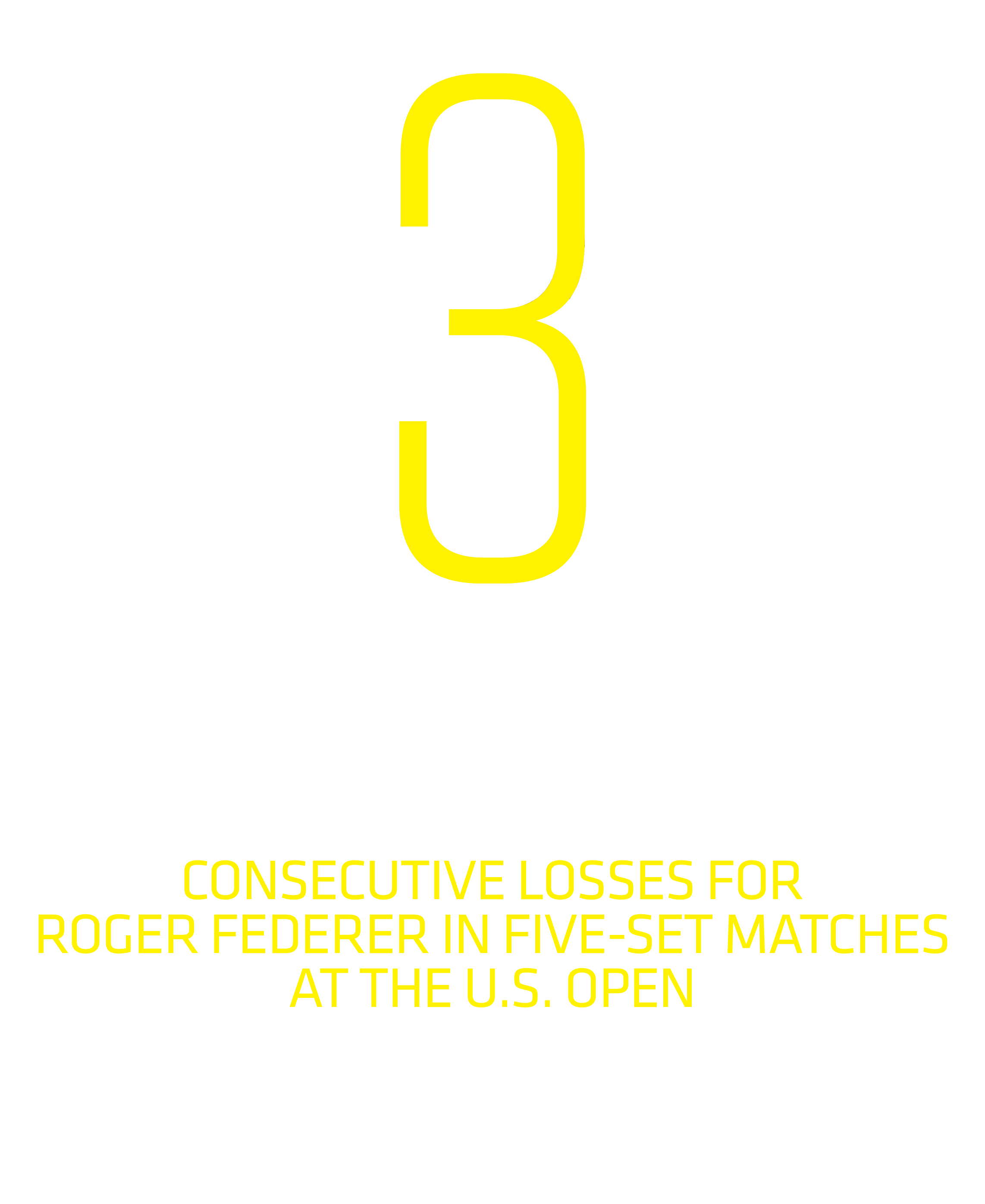 Hawk-Eye also homed in on exactly where the top four players move on the court by creating heat maps of their serve-return positions at the Open. Federer's results were eye-popping: He returned at least 28 percent more serves from inside the baseline than his three rivals. Two matches in particular played to his fondness for going inside early. In the second round against Carlos Berlocq, Federer jumped all over the Argentine's weak 102 mph serve inside for easy winners. In the next round, he cut off French lefty Adrian Mannarino's angles, especially those out wide on the ad court. This time out, watch for the added influence of coach Stefan Edberg, who joined Federer in January and has helped him rediscover his net game. 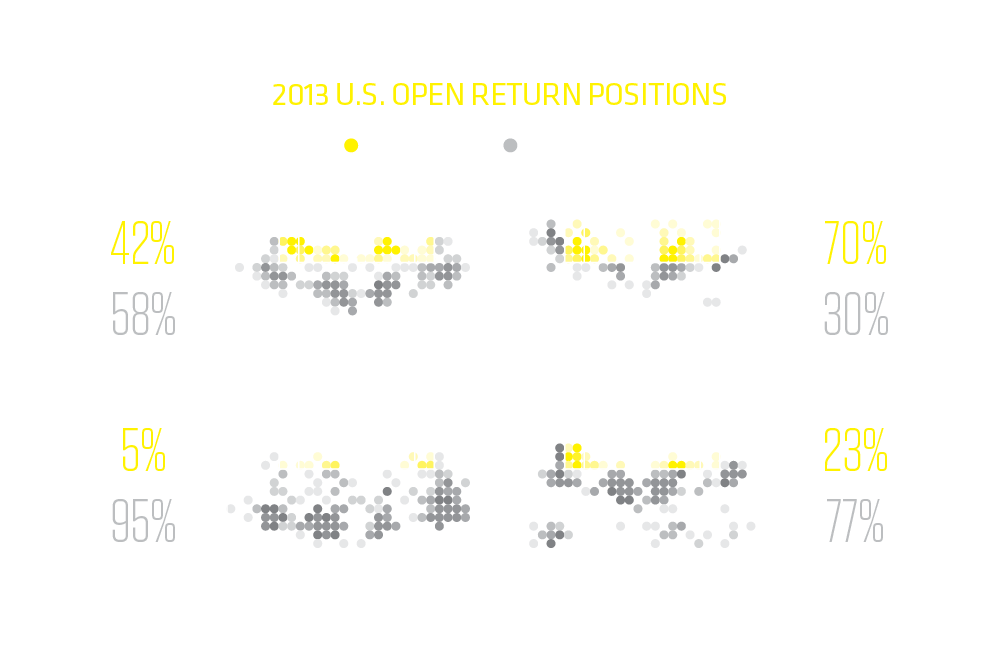 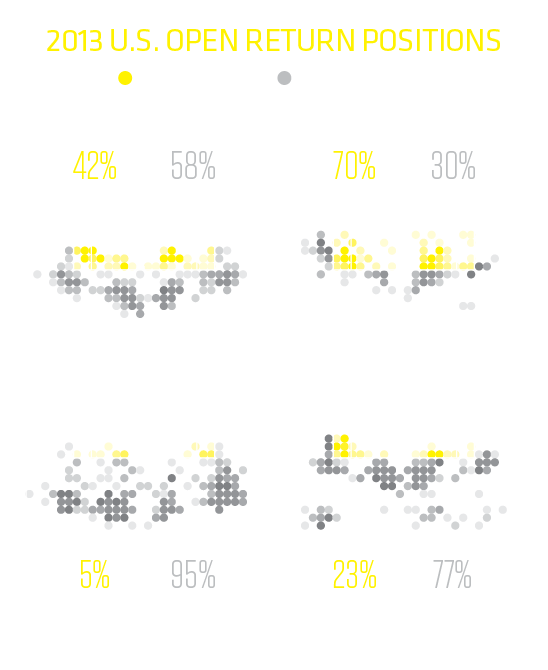 Looking at return positions for other majors, one thing is clear: Djokovic isn't afraid to mix it up. From the Australian to the French, his outside baseline percentage jumps an erratic 34 percent, which keeps him - and his rivals - on their toes. Not only is Djokovic famously flexible on the court, but his strategy is equally nimble when sizing up opponents. "His style really depends on who he's playing," says Cahill. "His natural game is to stand further back, and because he moves incredibly well, he can let the game come to him at times. But he also likes to jump on short serves and to take time away from his opponent." 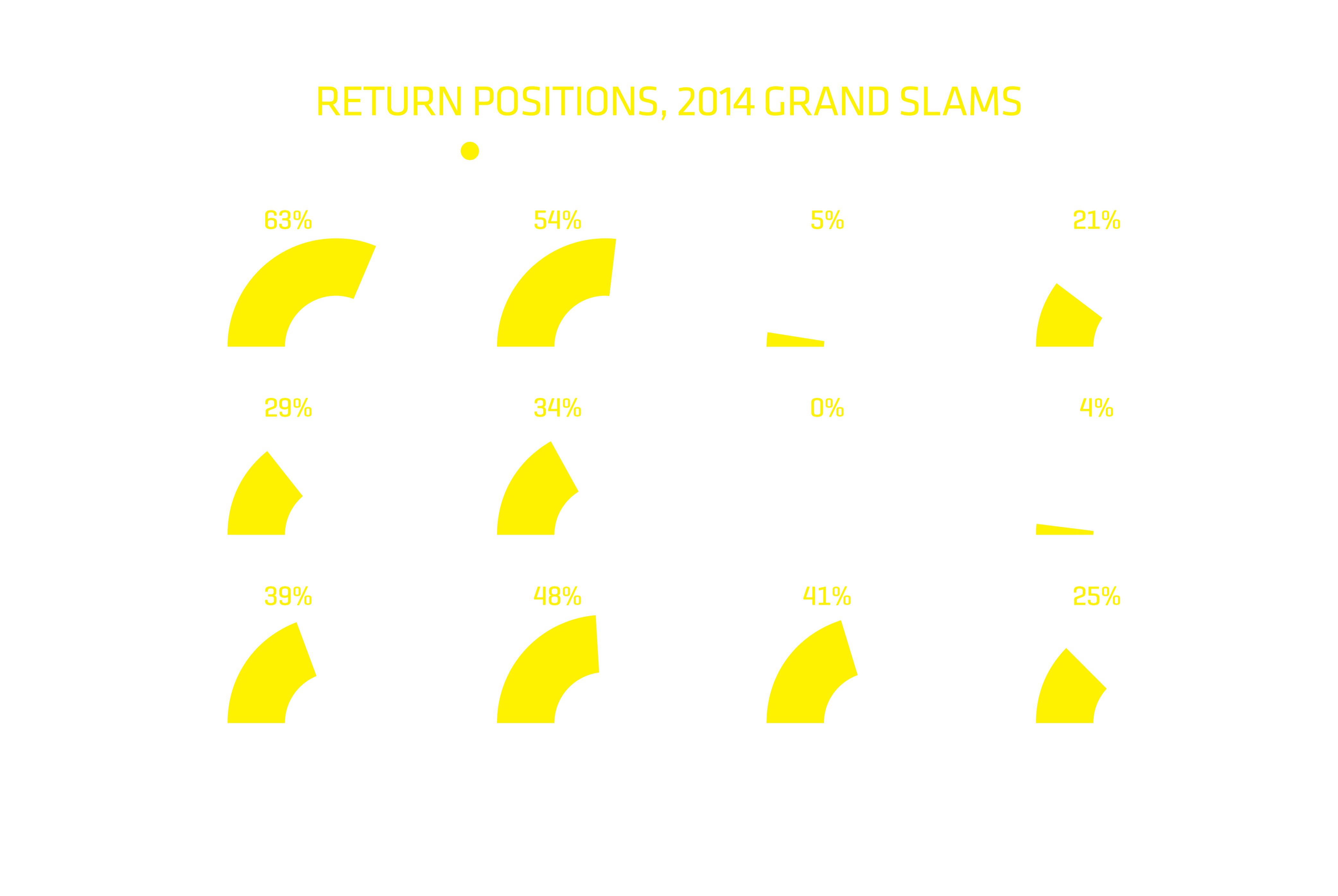 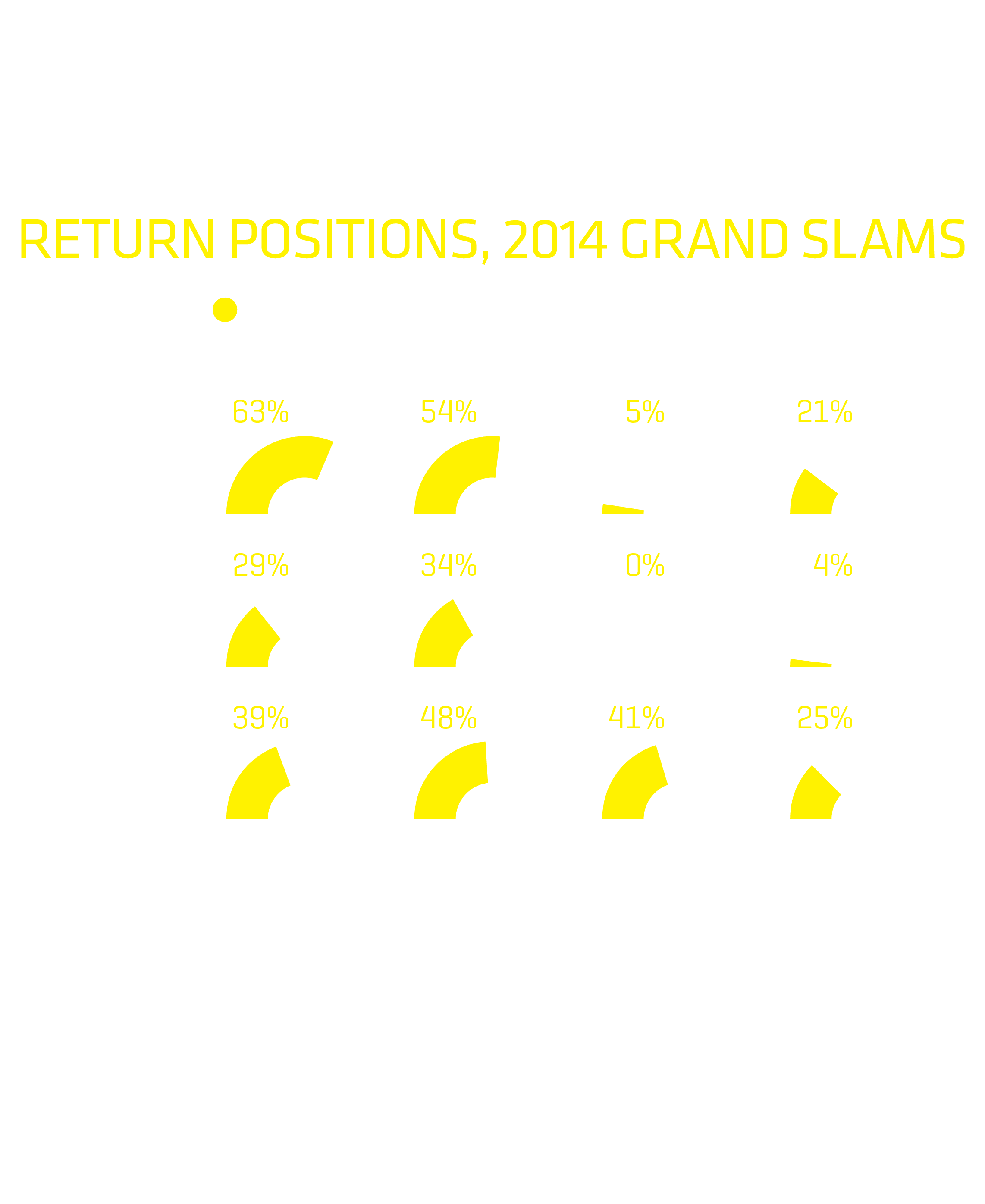