Catching up to the Bear

Bryant will always live in college football lore -- especially in Tuscaloosa -- but when you consider the era in which Saban has had success, should he be considered college football's greatest coach ... ever?

When pursuing a Bear, one must proceed with caution -- unless you're Nick Saban. He won his first national championship in 2003 in his fourth year at LSU. The SEC has only become more grueling since then, and it took Saban just three years to win a title at Alabama, where he has won three since.

When you consider how tough the SEC has been during its run of eight national championships in 10 years, the fact that Saban was able to win four of those in just seven years is incredibly impressive. Also, Saban's teams have played at least six games against ranked opponents in each of those championship years.

Most consecutive seasons reaching No. 1 in the AP poll

Consistency is such an important and daunting task when it comes to producing Saban's sustained success. Yes, the talent has always been in Tuscaloosa to make that happen, but that means constantly battling complacency and egos, while adjusting for the evolution of the game -- such as the changes in offensive tempo and schemes. With so many talented teams around Alabama, eight in a row is remarkable.

Most wins against AP top-3 teams

Saban always has his teams prepared for the biggest games and the toughest opponents. His teams have won their past six games against AP top-three teams, including back-to-back national championship victories over No. 1 LSU (a 21-0 win) and No. 1 Notre Dame (42-14) in 2011 and 2012, respectively. 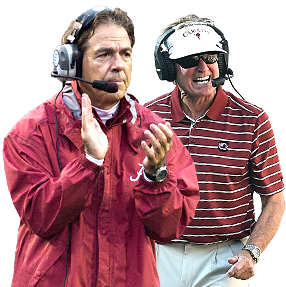 Saban surpassed the Head Ball Coach with six SEC championship game wins to Spurrier's five. Saban has won three of the past four SEC championships and is 6-1 in his seven SEC title game appearances.

Feeling a draft: Most first-round picks since 2007