They say defense wins championships. Well, whichever team wins, they will be right: The Broncos and Panthers are No. 1 and No. 2 in ESPN's defensive efficiency metric, which measures a team's per-play contribution to its scoring margin. Denver's D may have single-handedly taken out Tom Brady, but they'll surely need more help from their listless offense against Carolina. When Peyton Manning was on the field during the regular season, the Broncos turned the ball over 18 times. That's bad news against a Panthers D that forced a turnover on 19.4 percent of drives (nearly three percentage points more than the next-best team) and allowed 17 points or fewer in eight of its games this season (tied for third-most). The wild card for the Broncos? They scored six defensive/special teams touchdowns (tied for second overall), helping swing the result in four games this season. 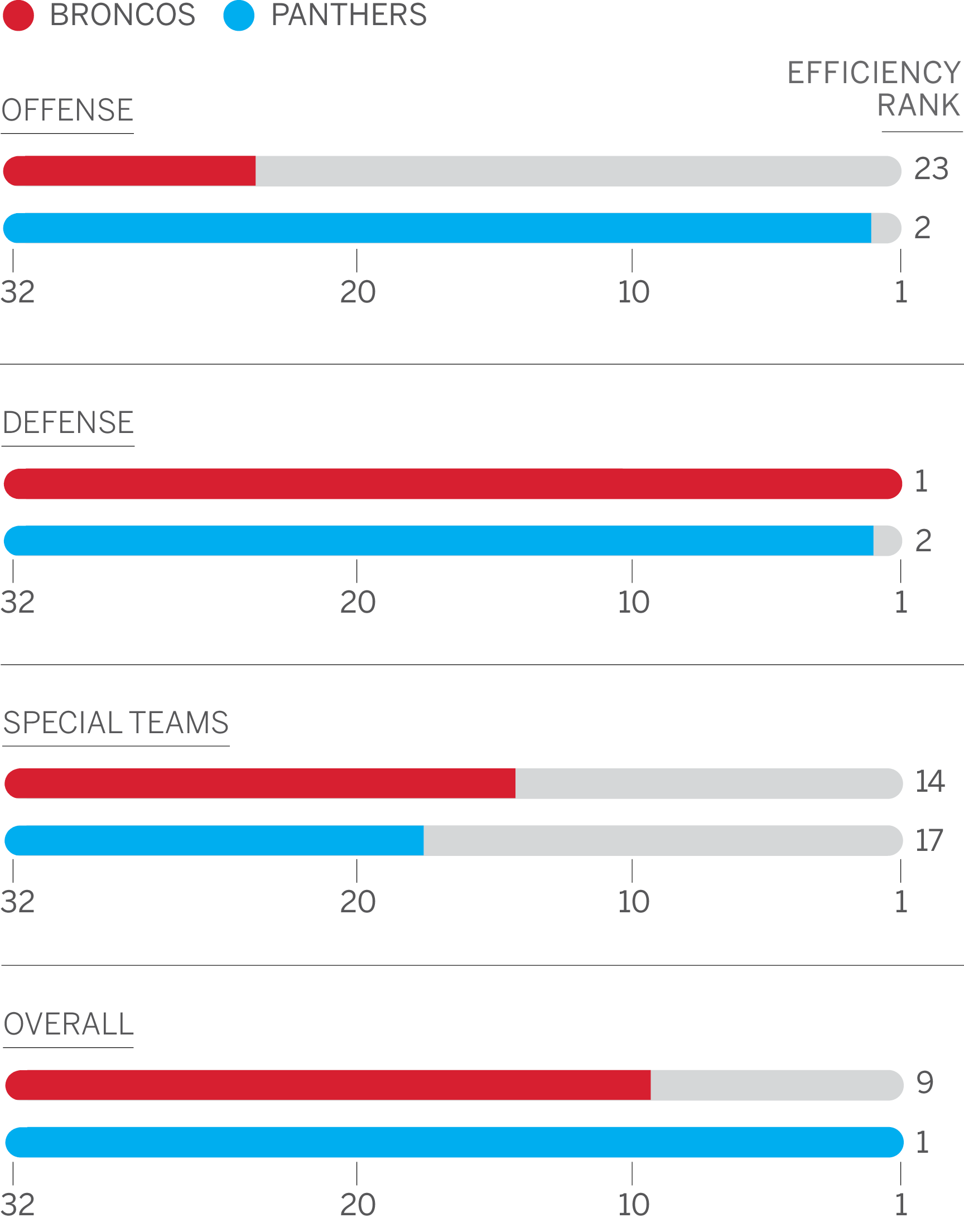 Cam Newton threw 68 passes of 21 yards or more this season, tied for the third most overall. He completed only 32.4 percent of them (tied for 22nd), but to paraphrase Gisele, he cannot both throw and catch the ball. Newton had 7.4 percent of his deep passes dropped (tops in the NFL), including four by WR Ted Ginn Jr., taking 211 yards and four TDs off the board. The Broncos, meanwhile, thrived against deep passes this season, allowing the third-lowest completion percentage (23.5), fifth-lowest yards-per-attempt average (8.98) and eighth-lowest Total QBR (49.7).

A word of advice for Broncos DC Wade Phillips: Leave the blitzes at home. Yes, the Broncos are third in Total QBR allowed when they bring five or more pass rushers, but they're also fifth when they play it straight. And Newton torches blitzing defenses. Consider this: 23.3 percent of Newton's completions vs. the blitz went for 20 yards or more, compared with just 13.9 percent when defenses didn't bring heat. On Sunday vs. Arizona, Newton found Corey Brown for an 86-yard score when the blitz-happy Cardinals tried to manufacture pressure. 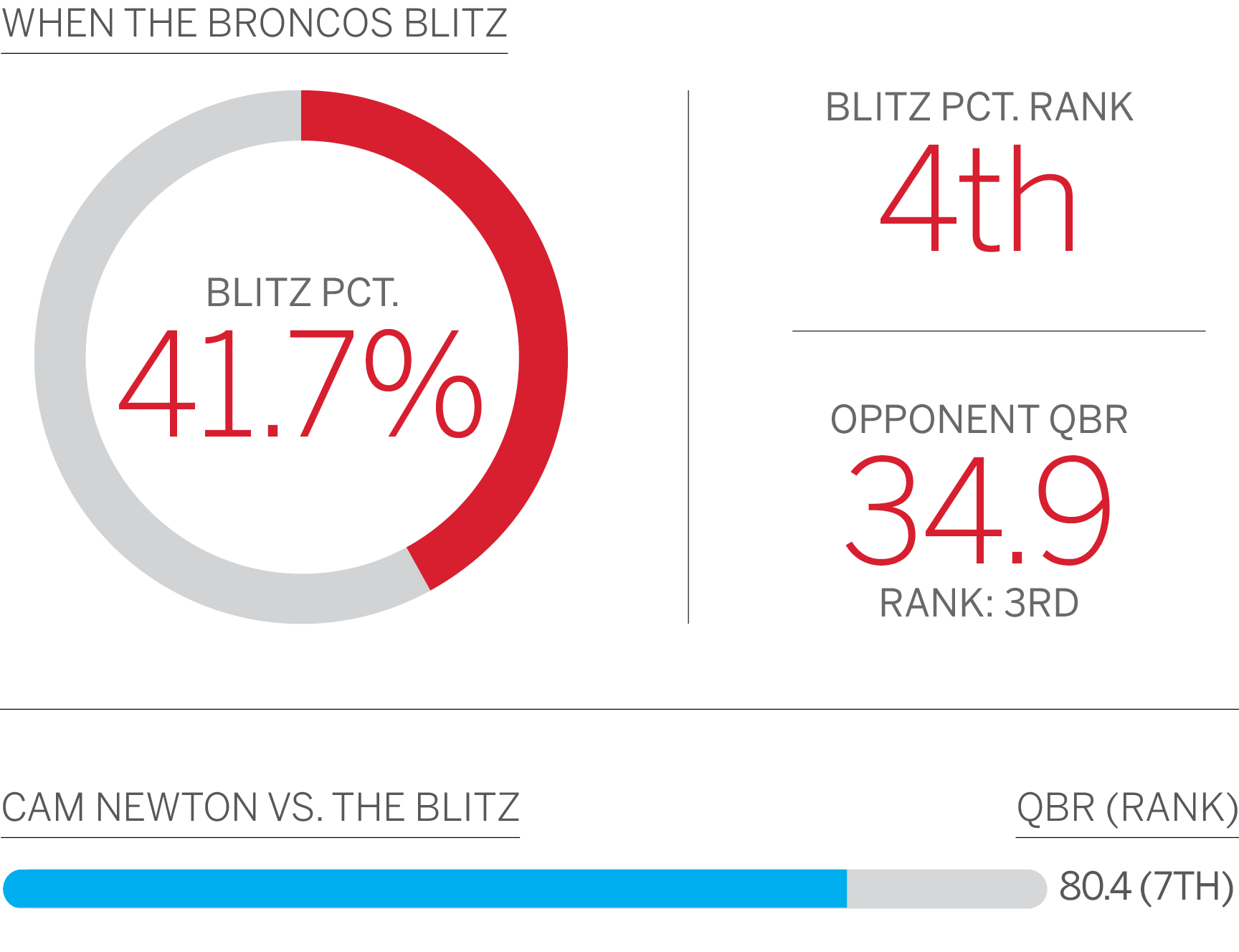 Newton posted 34 total TDs inside the 20 this season (four more than any other player). He converted 10 of his 29 red zone rushes into scores, the most by any QB since he put up 13 rushing TDs inside the 20 in 2011. Newton dazzled as a runner on Sunday against the Cardinals, notching two more red zone scores. After the Broncos' clinic against the Patriots, it might seem surprising that their red zone defense is ranked just 20th. But consider: Denver allowed only 37 drives inside the 20 all season, the lowest number in the league.

The Panthers ran the ball more often than any other team this season (46.2 percent). That included 103 designed QB runs for Newton, nearly double the next-closest passer (Tyrod Taylor, 53) and the most since 2006, when ESPN began tracking the stat. Denver better watch out: despite facing just 41 QB runs all season, the Broncos allowed 12 of them to go for 10 yards or more, tied for second most in the league. 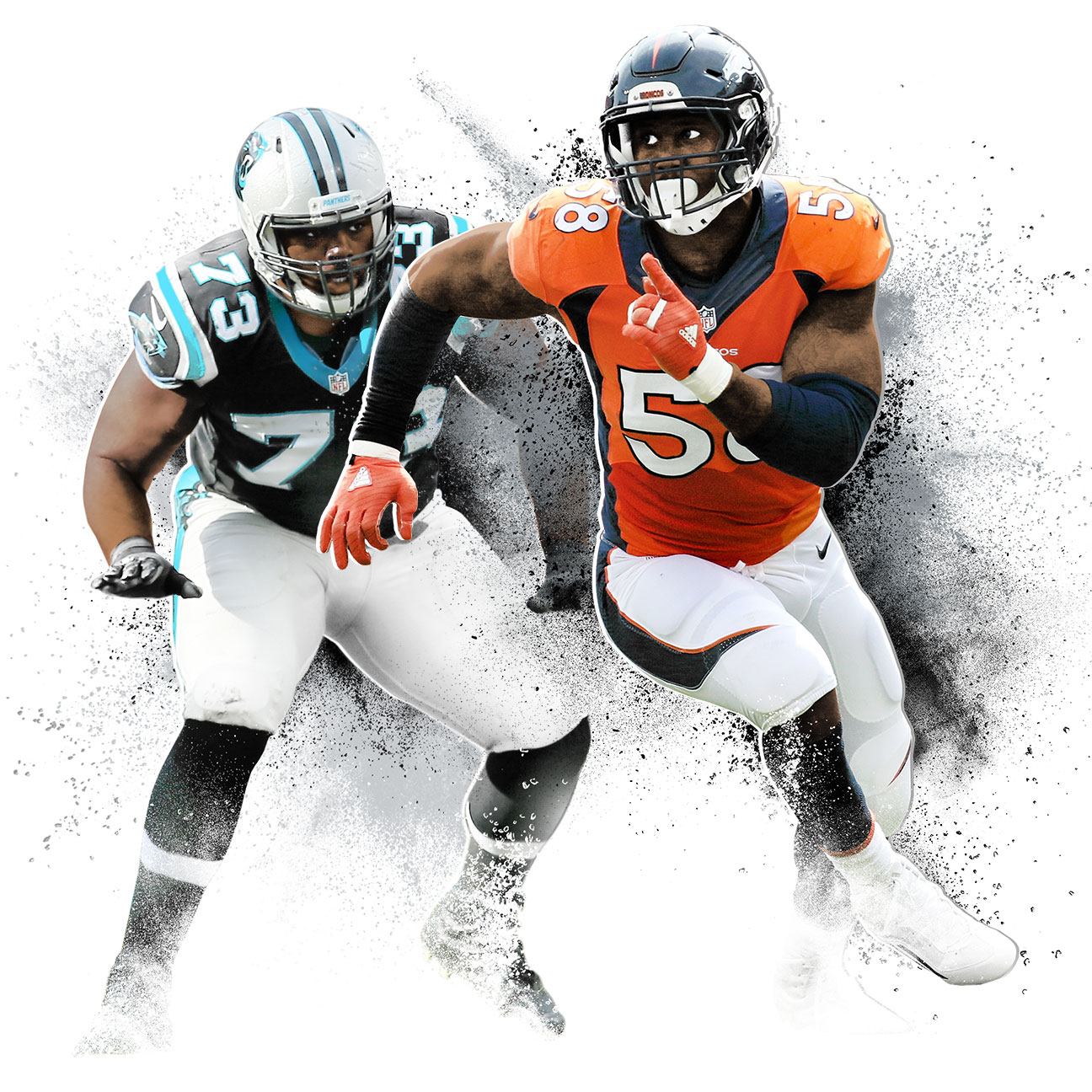 LT Michael Oher vs. OLB Von Miller: Once regarded as one of the worst left tackles in the NFL, Oher improved in his first season with the Panthers -- Pro Football Focus ranked him 32nd out of 81 qualifiers. The closest Oher got to facing pass rushers of Miller's caliber (11.0 sacks, tied for eighth overall) came in Week 2 vs. Houston. Neither J.J. Watt nor Whitney Mercilus -- who combined for 29.5 sacks this season -- got around Oher for a sack on that day. Regardless, he'll have his hands full with Miller, who was a one-man wrecking machine against the Patriots Sunday, registering 2.5 sacks and an interception.

Panthers QB play: Newton's race to likely MVP didn't begin in earnest until the halfway point of the season, after which he dramatically increased his efficiency and decreased his turnovers. The result? A 29.1 jump in his QBR, from 50.7 to 79.8, while the Panthers more than doubled their scoring margin (from plus-7.9 per game to plus-16.1) and secured home field advantage throughout the playoffs, which came in handy on their way to Santa Clara.

After nine picks in his first eight games (tied for 25th in the NFL), Newton threw just 1 INT in his final eight, the best in the NFL.

Newton completed 65.9 percent of his passes down the stretch, 11th in the NFL and a massive improvement over his 53.7 mark (31st) in the first half of the season.

Here's a crazy stat for you: Peyton Manning completed just two of his 21 deep passes to the left/middle of the field during the regular season. Two! That's 9.5 percent. His Total QBR in those quadrants? 4.6, 32nd overall out of 33 qualifying quarterbacks. Even last season, he still had a perfect 100 QBR on those throws (first overall), with a 54.8 completion rate and 6 TDs. He did manage to hit Emmanuel Sanders against the Patriots Sunday for 34 yards in that zone, so there may yet be hope. Manning better be ready to do the same vs. Carolina; those are two of the Panthers' weakest points in the secondary.

It wasn't that long ago that blitzing Manning was a fireable offense. In 2013, defenses came after the QB on just 24.3 percent of dropbacks, the lowest rate in the league, but he still managed to throw the NFL's second most TDs when blitzed (16). Today? Defenses are attacking Manning early and often (35.3 percent blitz rate, seventh-highest). Expect the Panthers to follow that blueprint. 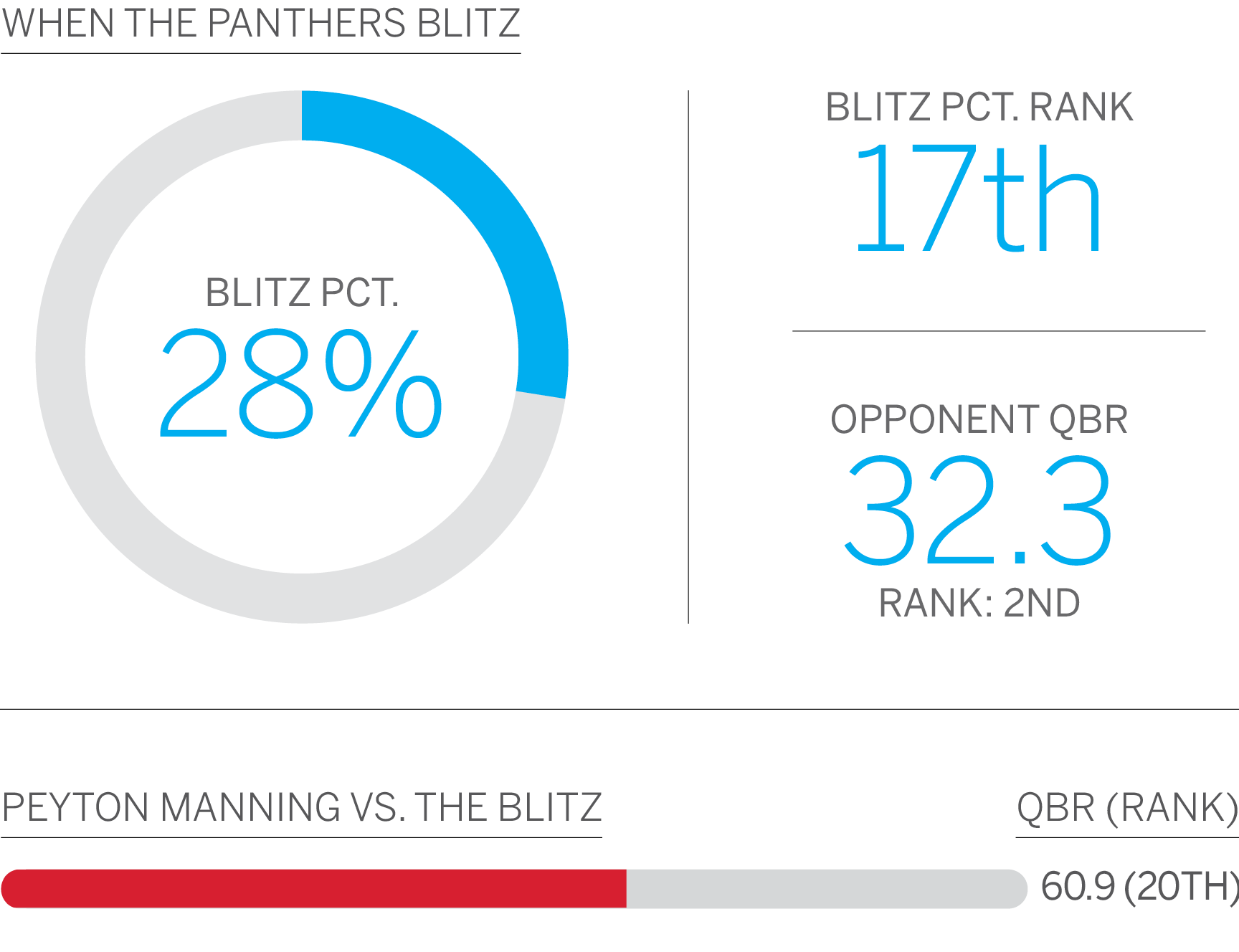 The Broncos' offense is one of the NFL's worst red zone units (47.7 percent conversion rate, 28th overall). Denver's QBs threw just 13 TDs inside the 20 this season, compared with a league-high 26 in 2014. They'll face a Carolina defense that's stout in the red zone (52.5 percent, 10th overall) and overall allowed opponents to score on just 26.5 percent of drives, the lowest rate in the NFL.

In their last seven games of the season, the Broncos rushed for at least 170 yards on three occasions. Only the Seahawks and Bills matched that down the stretch. They'll face a tough Carolina run defense (ranked fourth), but also one that's had the luxury of playing from ahead most the year: With teams playing catch-up to Cam Newton, the Panthers D faced only 364 rushes this season, third fewest in the NFL. 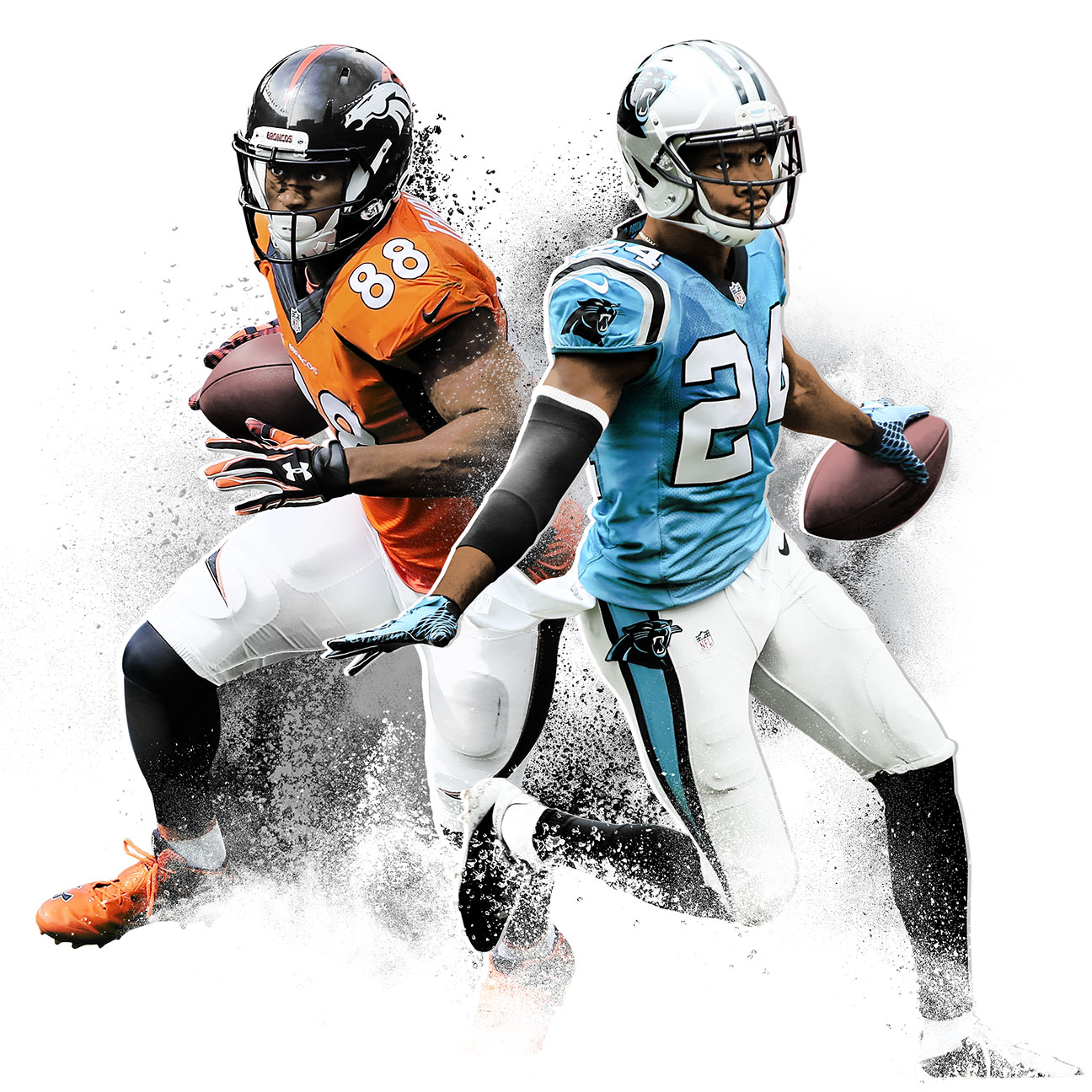 WR Demaryius Thomas vs. CB Josh Norman: Thomas ran 449 routes on the perimeter this season, 12th most in the league. According to Pro Football Focus, Norman spent 98 percent of pass plays matched up against outside receivers. So we'll likely get a classic best-vs.-best matchup. Norman rattled the likes of DeAndre Hopkins, Odell Beckham Jr., Dez Bryant and Allen Robinson this season, and Thomas put up 1,300-plus yards for the fourth consecutive year.

Broncos run game: In their first six games, the Broncos had just four rushes of 15 yards or more. Only five teams were worse. Without those big plays and with a floundering Manning, Denver relied on its defense to start 6-0 through seven weeks. But the running game picked up the pace from Weeks 8 to 17, hitting on 20 runs of 15-plus yards (tied for second overall). Seven of those went for scores, far surpassing the league average of 1.3 over that time and the Broncos' yards-per-carry jumped from 3.62 to 4.47. After a middling performance against New England (99 yards rushing), the Denver run game will look to recapture its mojo in the Super Bowl.

The biggest reason for the change was the ability of Denver's RBs to churn out yards after first contact (1.95, third overall) from Weeks 8 to 17.

Let's face it: The refs are going to impact Super Bowl 50. It's just a matter of how. As the chart below shows, we could be in for a penalty disparity on Super Sunday. The Broncos committed 62 defensive infractions this season, 49 percent more than the league average (41.6). Their biggest problem? Defensive coverage penalties. Denver registered 23 D-holding, pass interference and illegal contact calls, fourth-most in the NFL. Ace CB Aqib Talib had nine accepted penalties called against him this season, tied for fifth-most among defensive backs. Three of those were PI calls, but Talib also got tagged for three unnecessary roughness/unsportsmanlike conduct flags. Carolina, meanwhile, was flagged just 10 times for defensive coverage penalties, tied for second-fewest in the league. 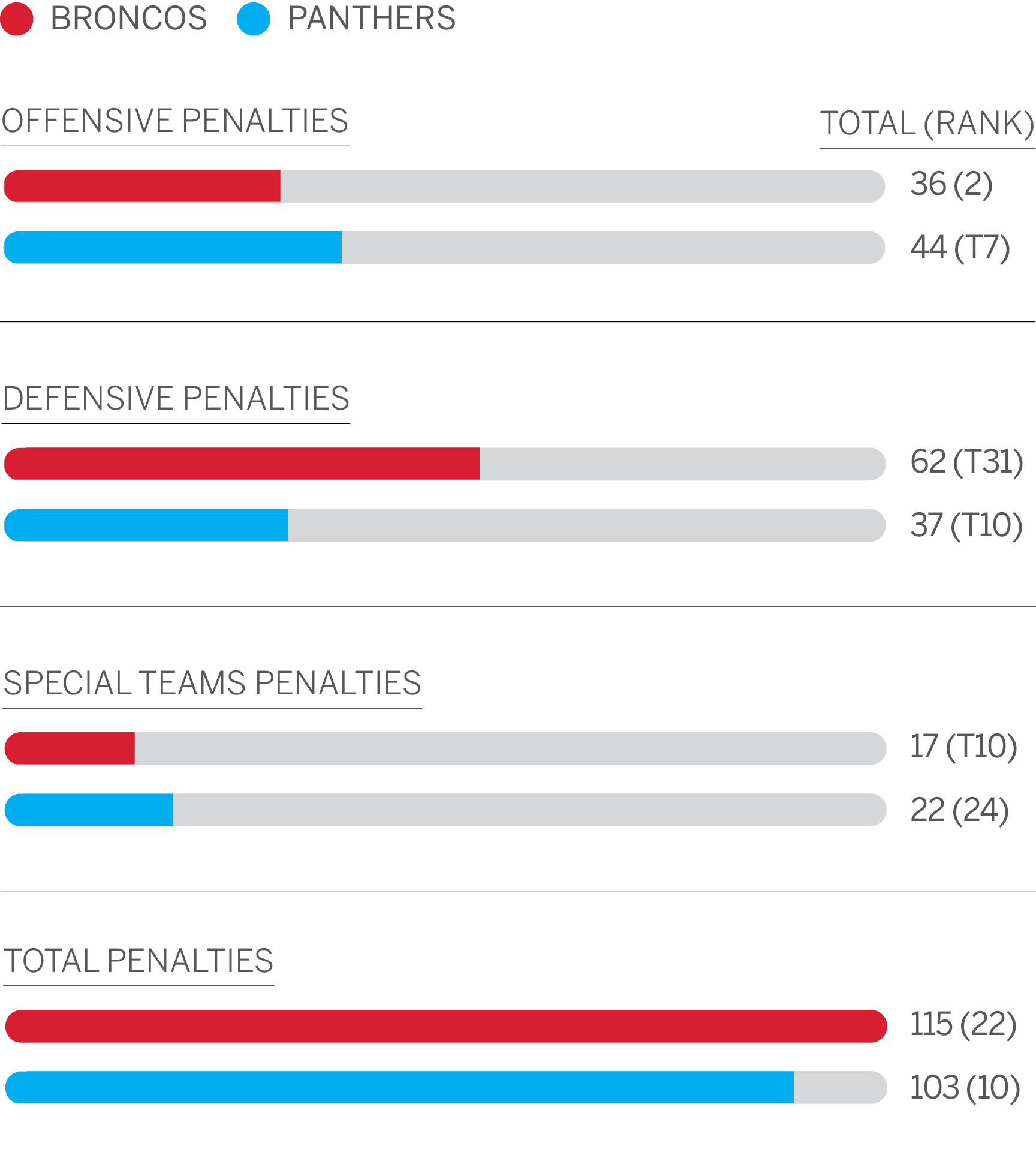 Will Peyton Manning get his elusive second title? Or will Cam Newton dab his way into a new era? According to ESPN's Football Power Index, which takes into account each team's strengths, as well as several other factors, get ready for a classic, with the Panthers squeaking past the Broncos to claim their first Lombardi Trophy. 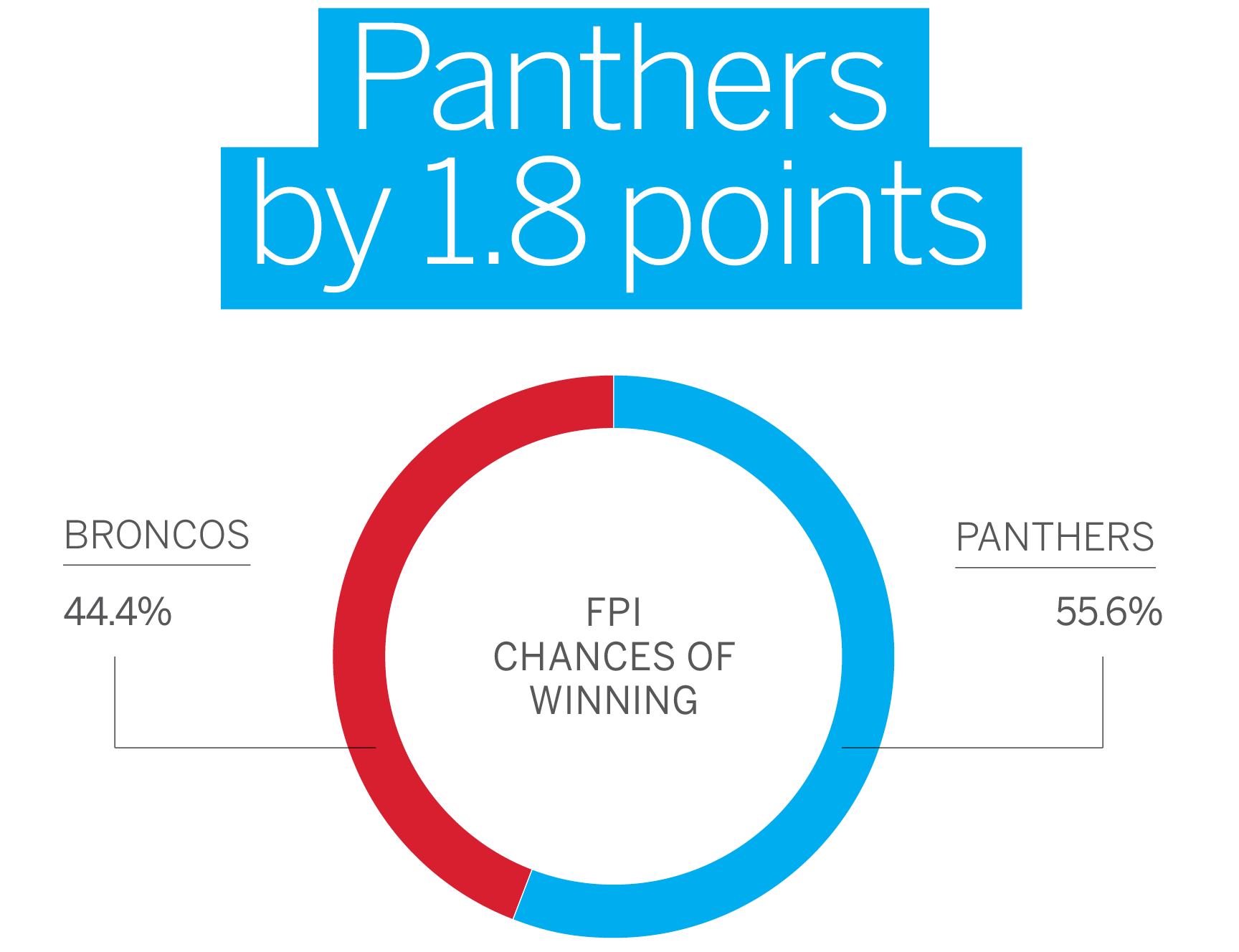 *All data through regular season.