unter Wendelstedt has worked as a major league umpire since 1998, so he knows how difficult it is to reach the game's highest level.

"The odds are terrible. The odds are really, really terrible," said Wendelstedt, who also runs the Harry Wendelstedt School for Umpires, named after his late father, also a longtime MLB umpire. "I feel like I'm Walt Disney because I'm selling a dream."

While the odds are remote, the dream Wendelstedt is peddling is so bewitching that 136 students enrolled in the Daytona Beach, Florida, school this January, the vast majority of them hoping to become a major league umpire.

The students -- all men, most of them young, with some in their teens -- came from every walk of life. Many were former baseball players either sidelined by an injury or who had come to the realization that they would never play professional ball. All were looking for a way to stay connected to the game they love.

There was a 22-year-old Dominican man hoping to become the first MLB umpire from his country.

There was a 40-year-old retired cop from Portland, Oregon, who figured umpiring wasn't so different from policing -- they both require a level head.

And there was a 59-year-old who only wanted to be the best Little League umpire in his small town of Kinston, North Carolina.

Bill McGowan, one of 10 former umpires inducted into the Baseball Hall of Fame, opened what is now the Wendelstedt school in 1938. Later, former umpire Al Somers owned it for two decades until Harry Wendelstedt took over the school in 1977. Today it's run by Hunter Wendelstedt, who assumed control after his father's death in 2012.

The cost for the five-week professional course is $2,350 and includes tuition, hotel room, rulebook, course materials and uniform: a T-shirt and a cap. Classes run six days a week, from sunup to sundown.

The instruction begins with the basics. Day 1 started like this: "Turn your rulebooks to Rule 1.01: 'Baseball is a game between two teams of nine players each under direction of a manager, played on an enclosed field in accordance with these rules, under jurisdiction of one or more umpires.'"

During the first week, the students learn the proper mechanics of a call: strike, ball, safe, time, out. By Week 3, the instructors are yelling in the students' faces. They are preparing them for the day the young umpires will encounter an irate manager and showing them to how to handle and defuse on-field flare-ups.

Later in the course, baseball teams from local high schools and colleges come to the fields to practice so the umpires-in-training can work real innings. Grades are given on written exams and evaluations are made of their on-field performance, particularly behind the plate.

The Wendelstedt staff is composed of current major and minor league umpires, all looking at the students for various intangible qualities. For Wendelstedt, it's honesty -- an umpire who will own up to a bad call. For Ed Hickox, it's integrity -- one with high standards and dedication. Dana DeMuth is looking for someone who can apply the rulebook to the field and improve with every game. All three, with a combined 57 years of MLB umpiring experience, started at the Wendelstedt school.

In the end, 24 of the 136 students made the cut. They now move on to the next level, a one-week course in Vero Beach, Florida, where they could be offered placement in the minors. If so, most won't be able to afford to quit their day jobs: When they're on the field, they'll make a base salary of $500 per week for only three or four months of work.

If the young umpires pay their dues for 10-15 years in the minor leagues and eventually earn a coveted slot in the majors, they would start at around $120,000, and with experience, could make up to $350,000.

"The crazy thing about this umpire school is that there's one person here that will make it to the major leagues," Wendelstedt said. "One person from this class will make it."

Whoever does will join an elite group of nearly 100 MLB umpires, many of whom started right where these guys did: flipping their rulebooks to Rule 1.01. 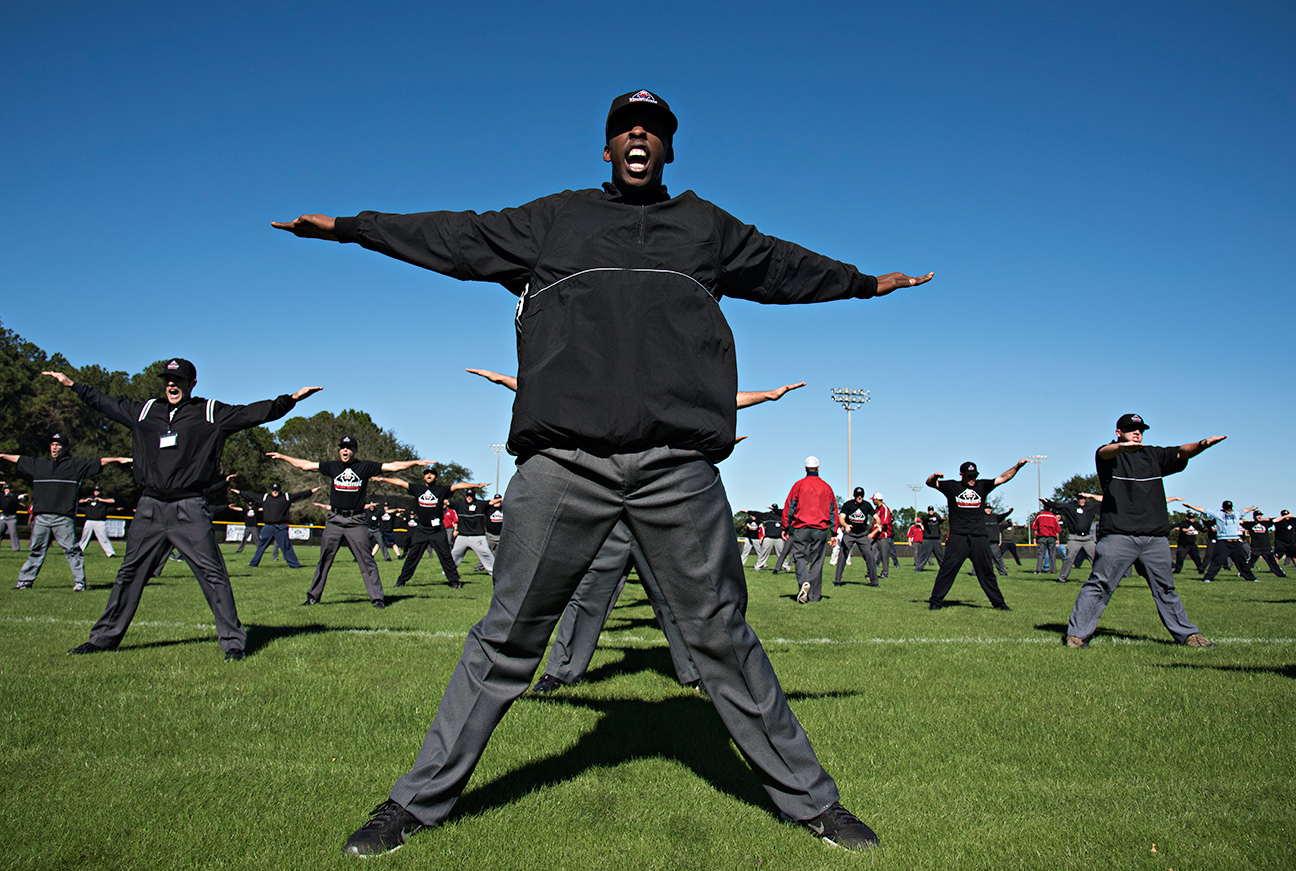 Gerald Perry works on the mechanics of a "safe" call during the first day of umpire school. 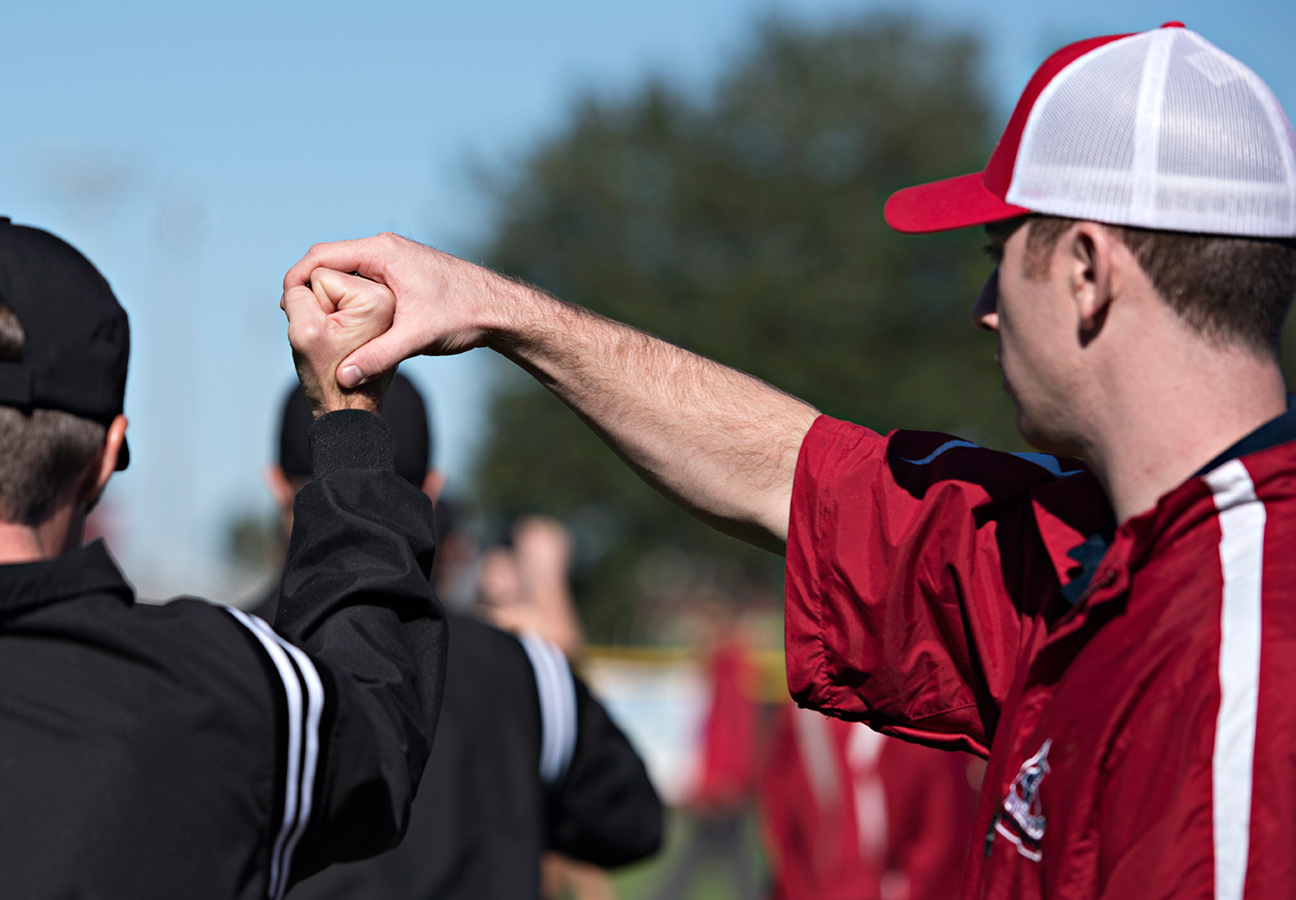 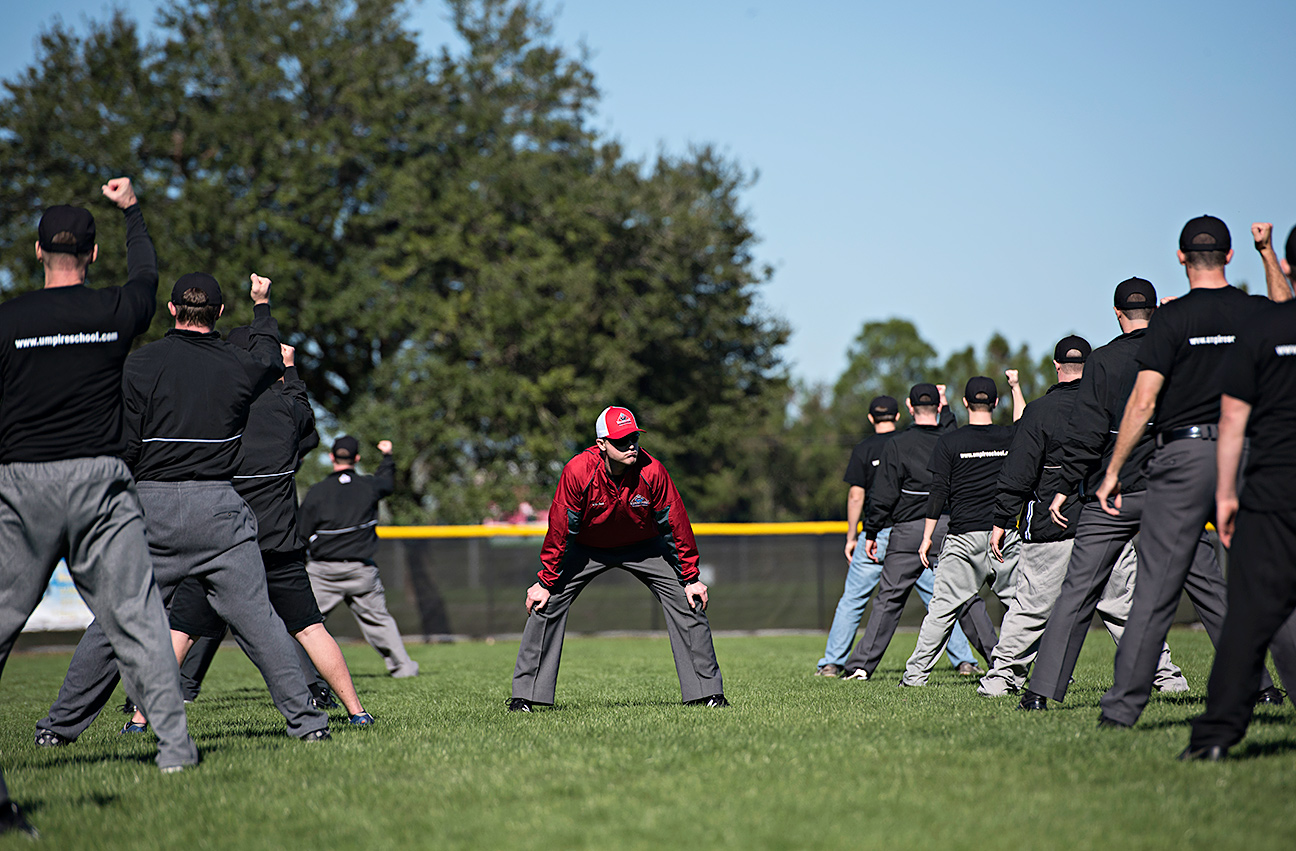 Squatting between rows of would-be umpires, instructor Darius Ghani keeps an eye on their mechanics as they learn how to call a proper strike. 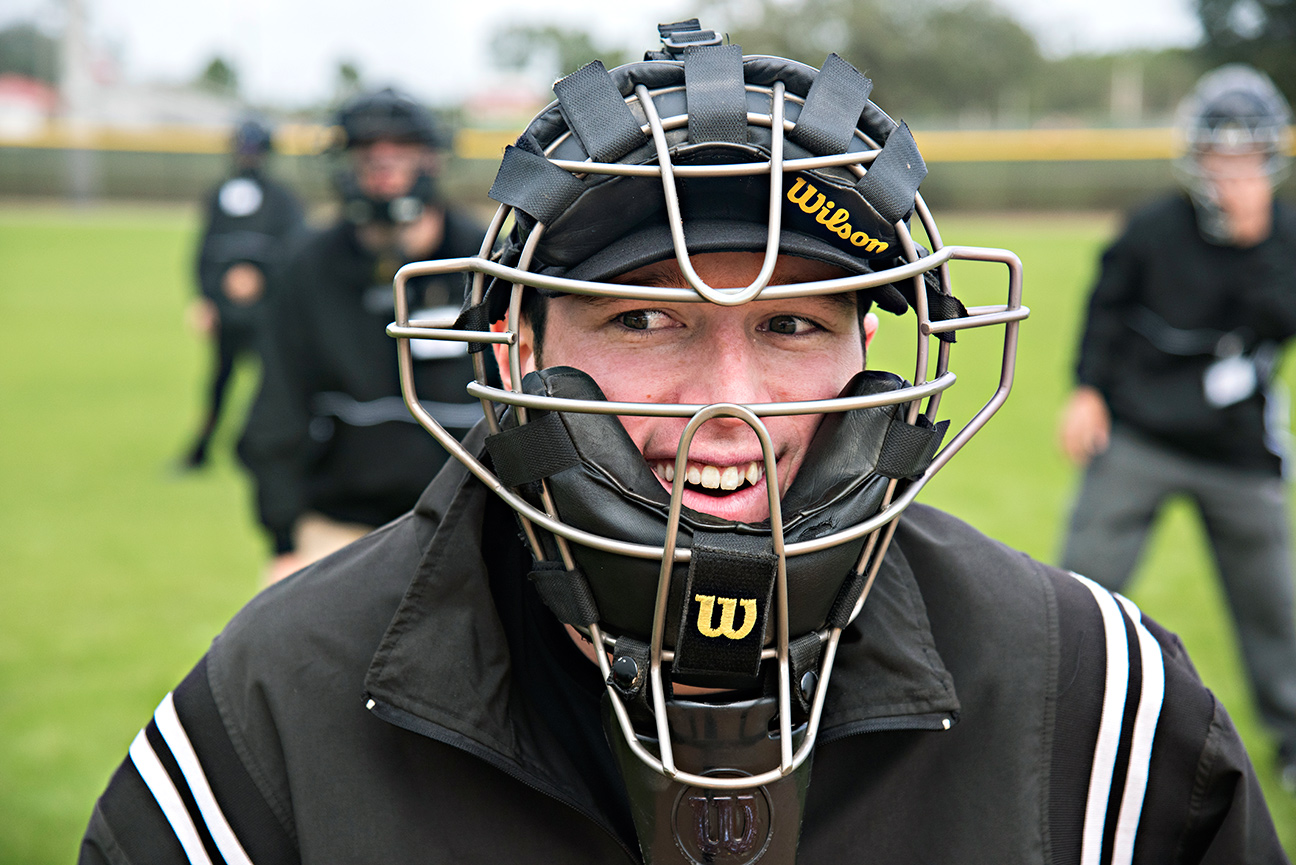 Dave Van Zummeren gets comfortable in his stance and behind the mask. 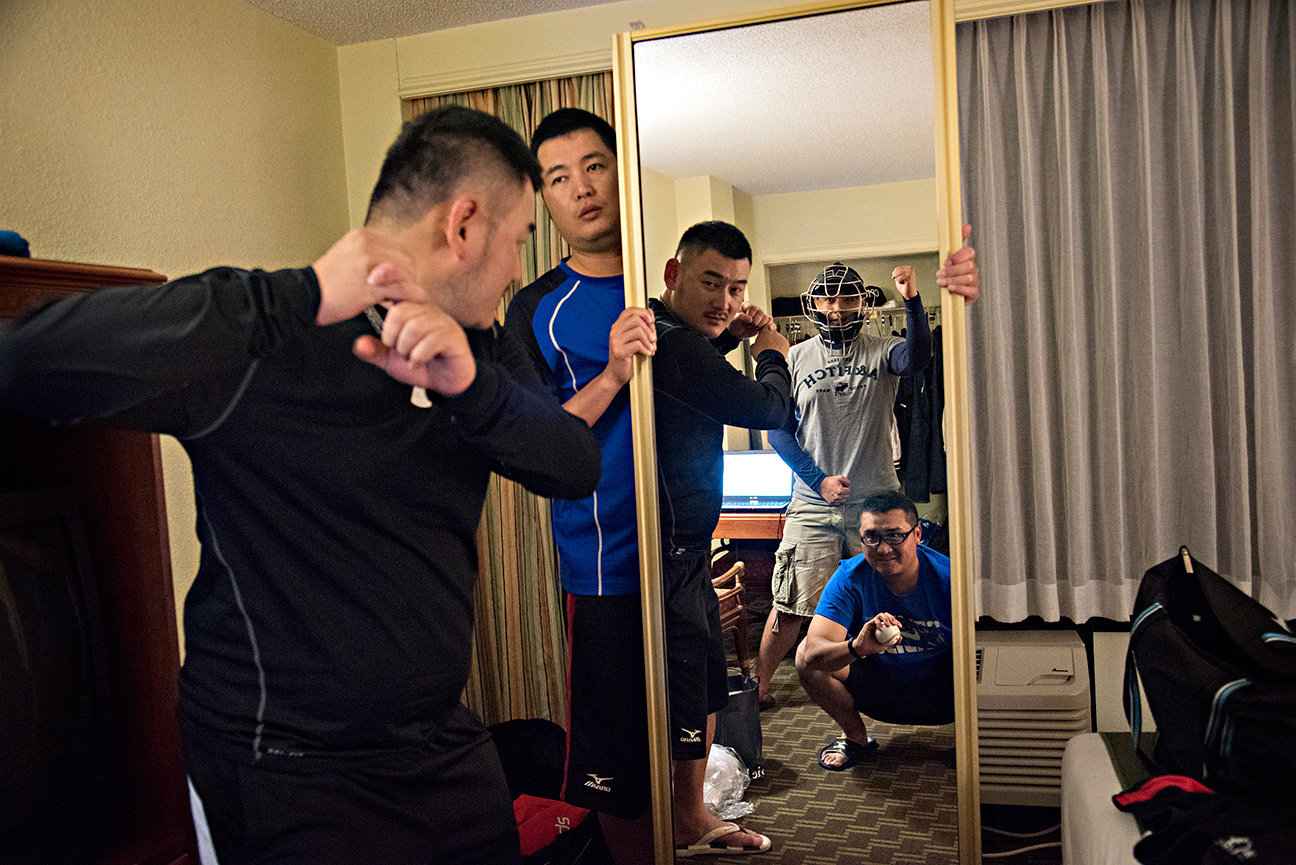 Practicing in the hotel room after hours, Daohuei Yang, left, stands in as the batter, Chiu Hiko catches, and Evan Yu holds the mirror so Jarvis Wu can check his mechanics as he makes strike, ball and out calls. All four are umpires in the Chinese Professional Baseball League and attended the five-week umpire school together. 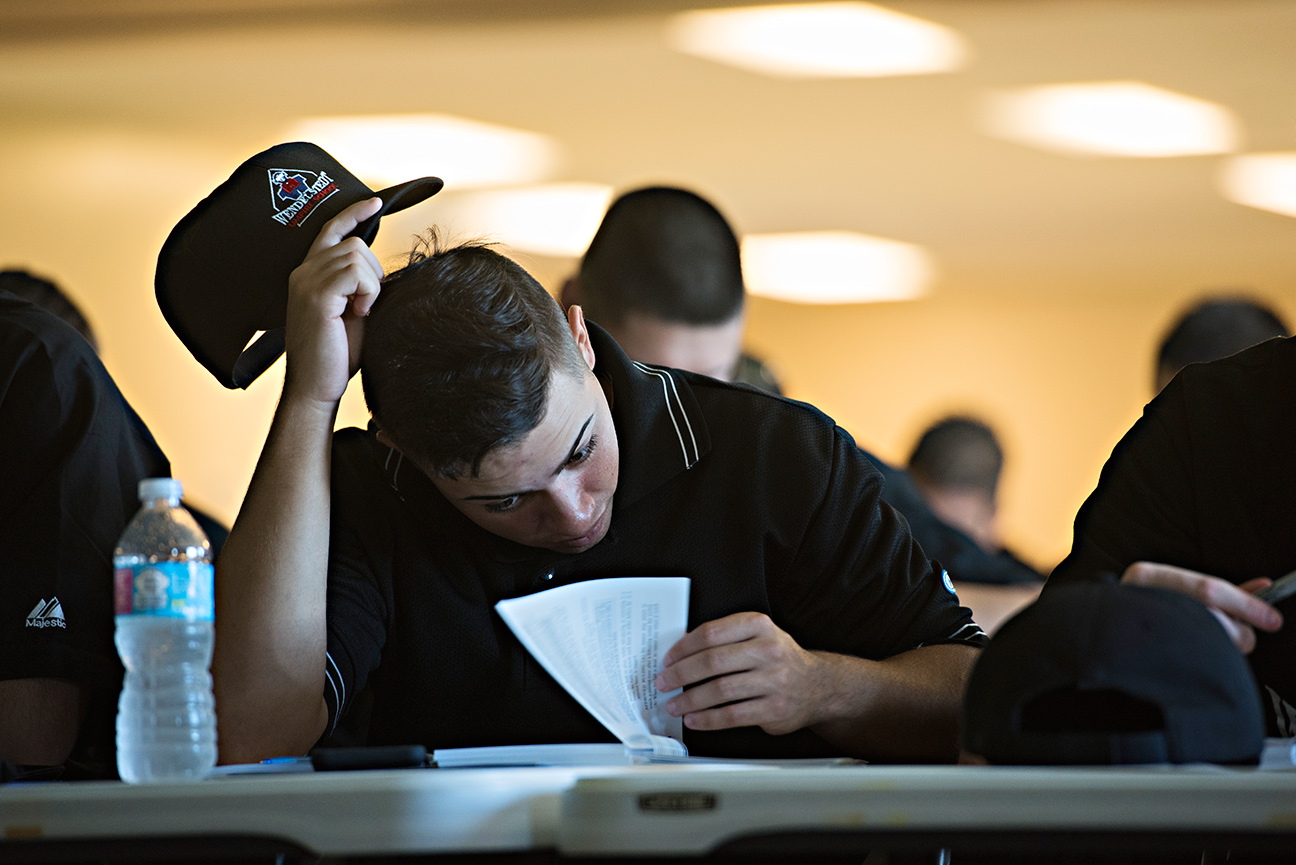 Adam Cortes studies the rulebook, which students are tested on extensively. 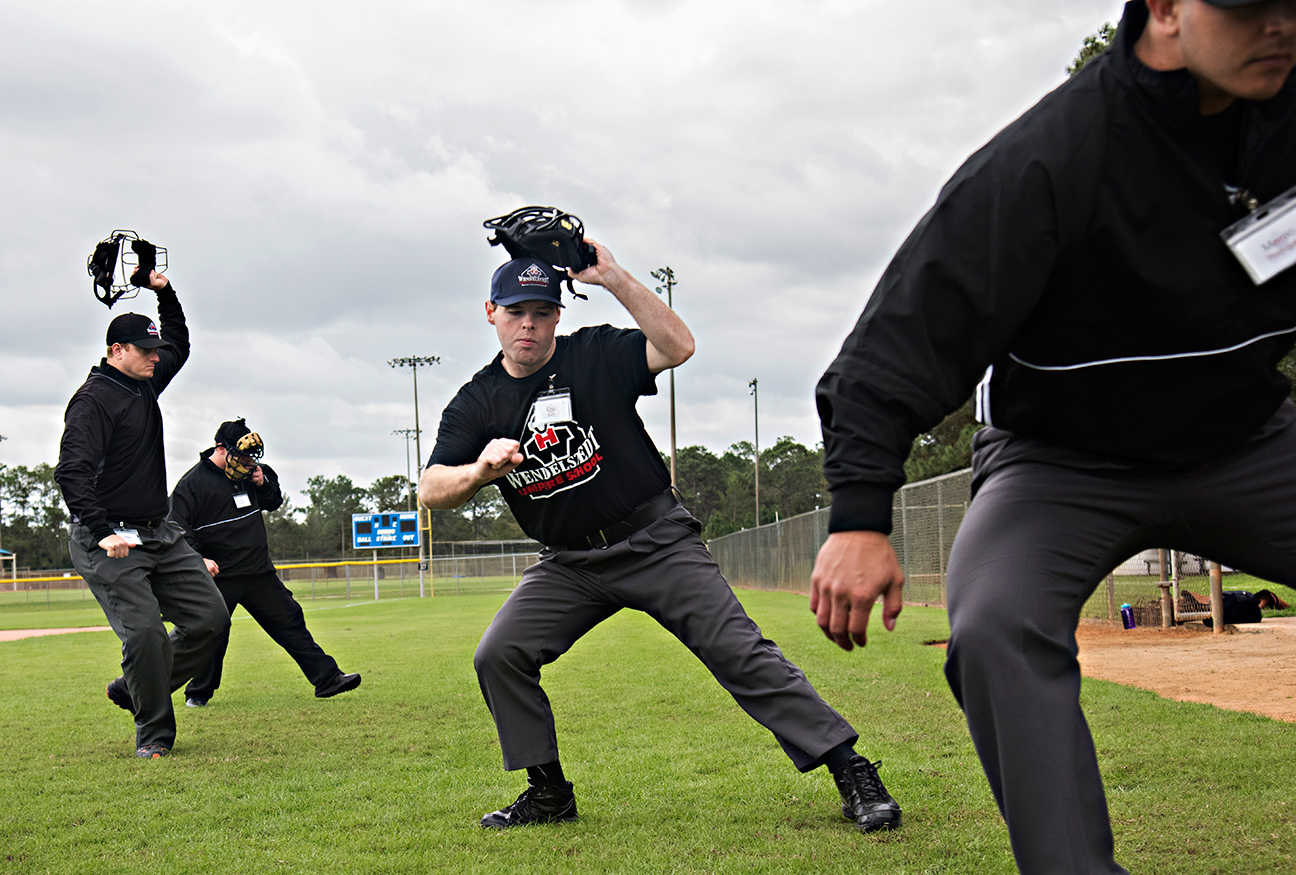 Eric Swift, center, works on the motion of dropping back and taking off his mask. 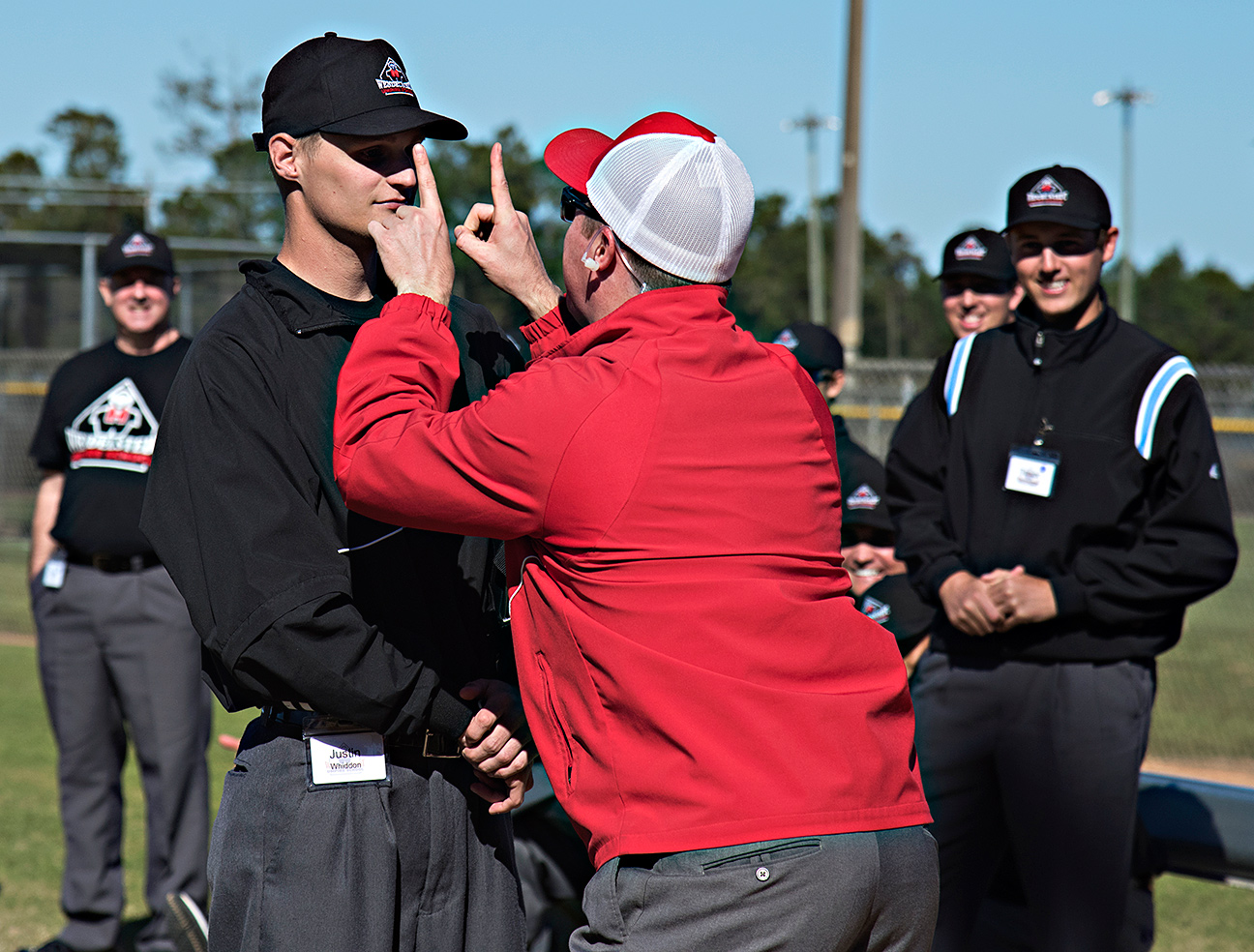 Student Justin Whiddon, left, gets an earful of insults from instructor Junior Valentine as the mock manager gets in Whiddon's face to dispute a call. 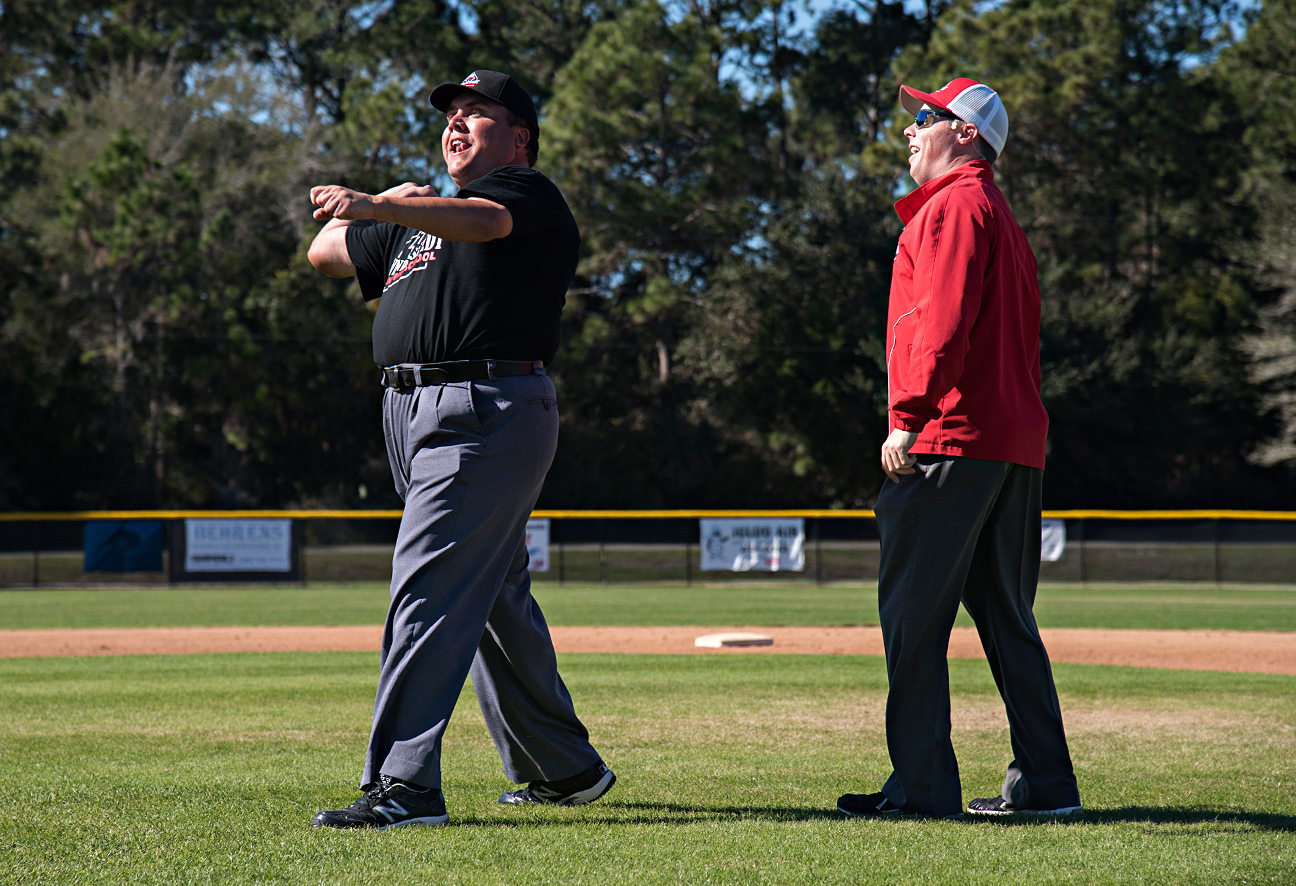 Arthur Singh tosses Junior Valentine from the game after the instructor-turned-manager crosses the line while arguing a call. 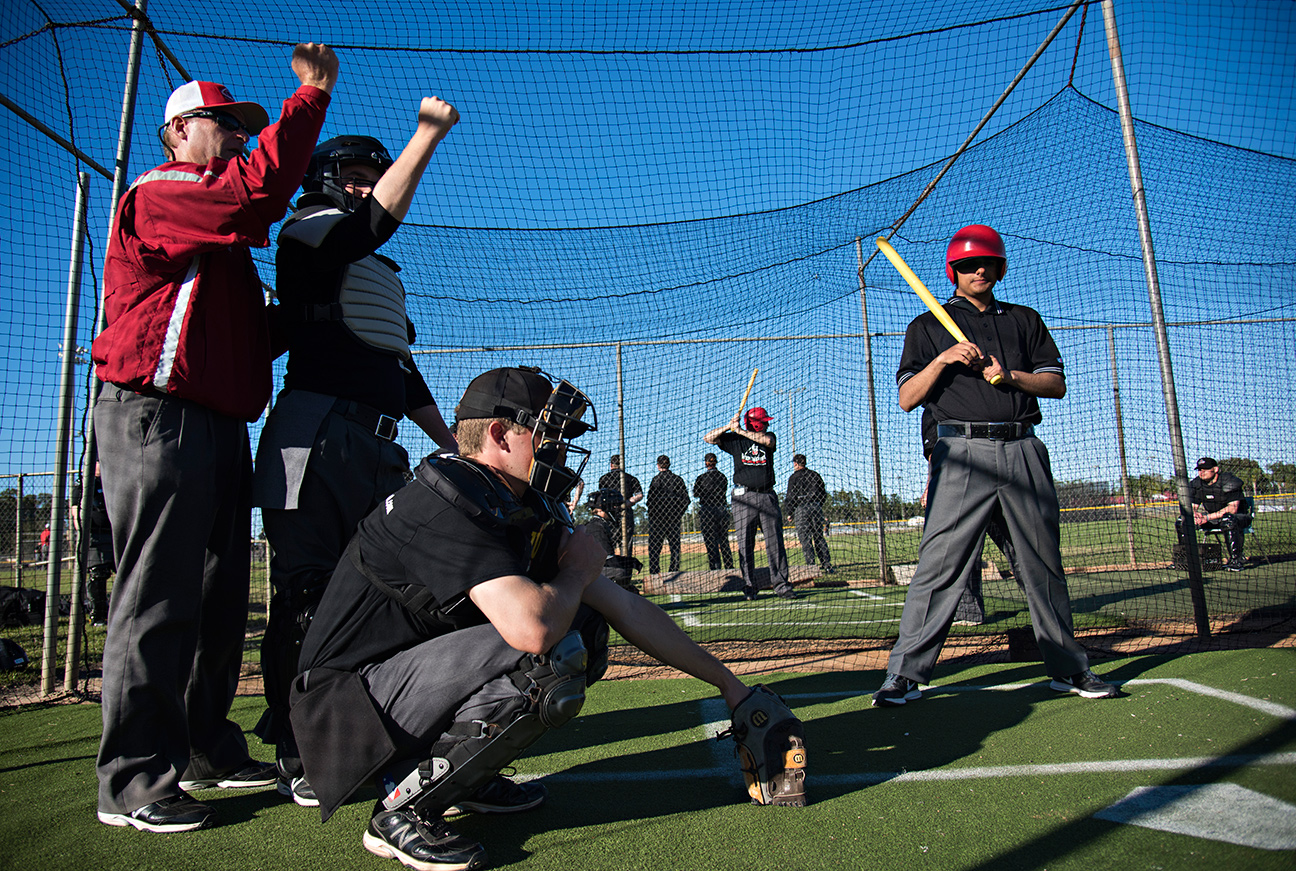 Students often receive one-on-one instruction in the cages from major league umpires like Ed Hickox, left, who stands behind a student and teaches him the proper strike-calling mechanics. 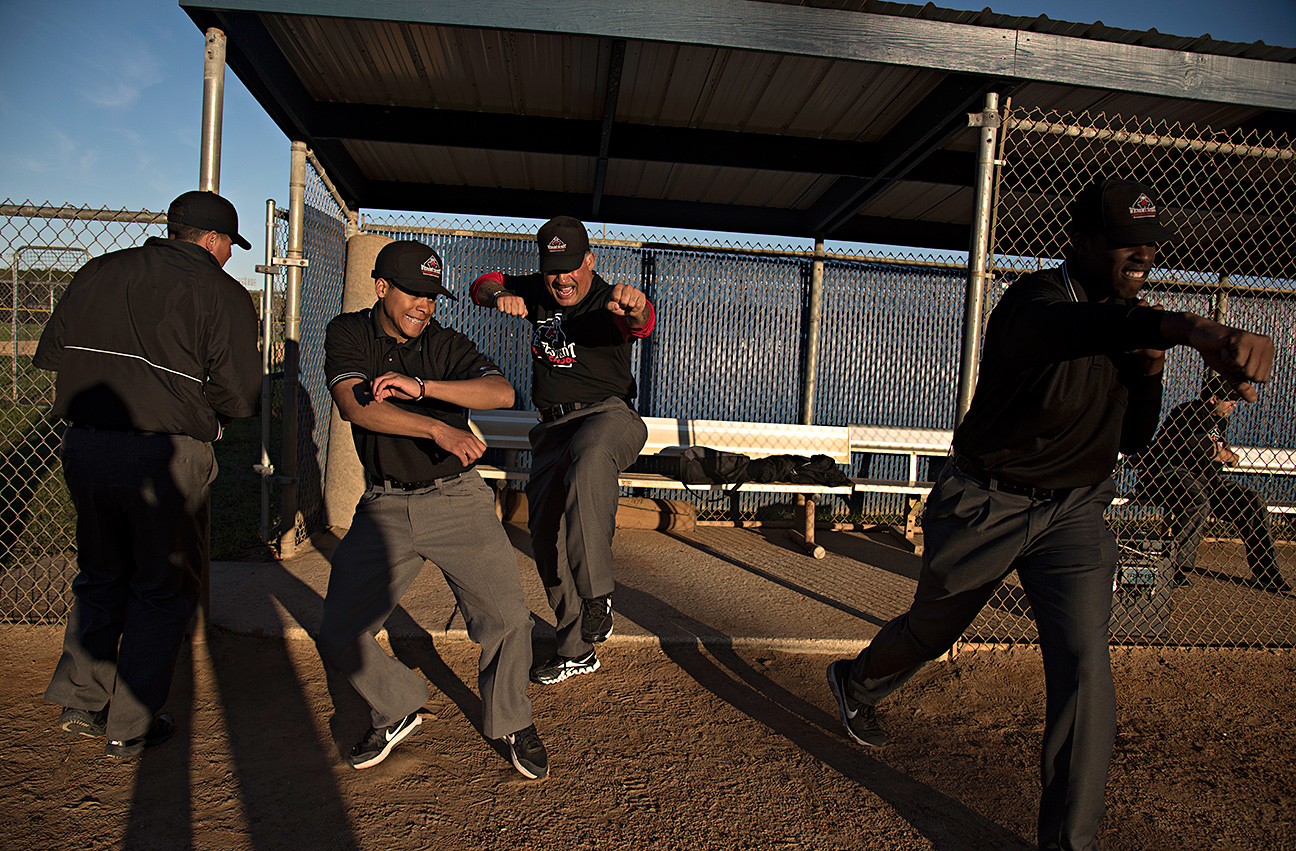 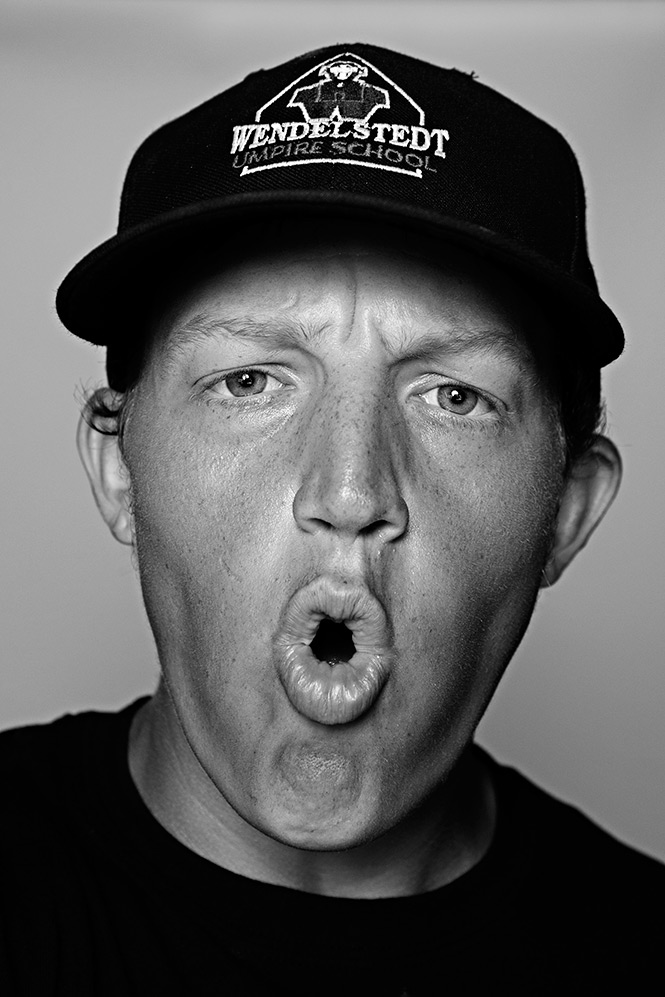 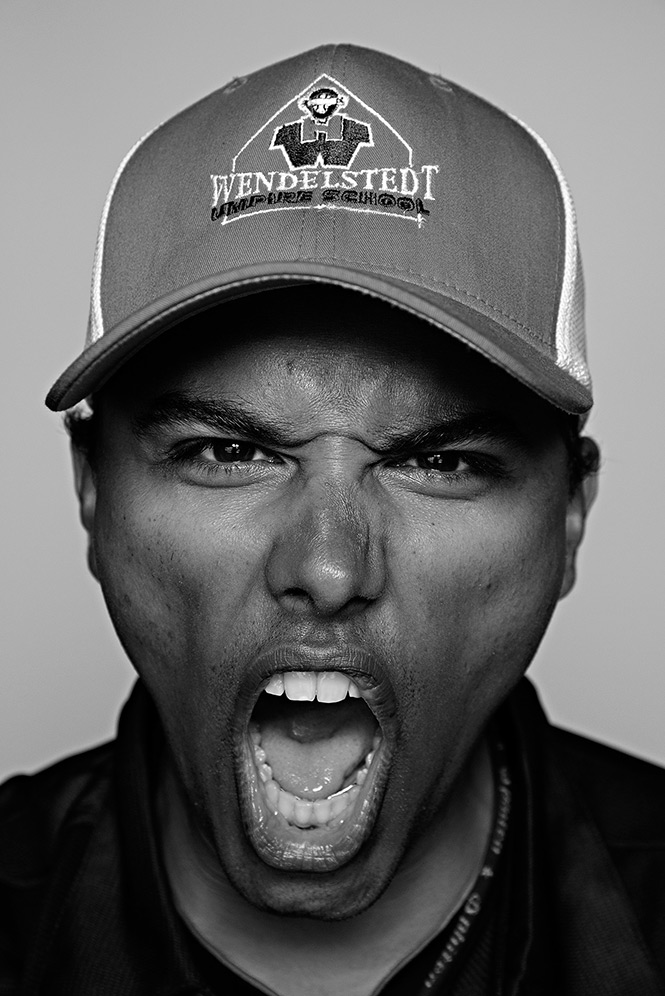 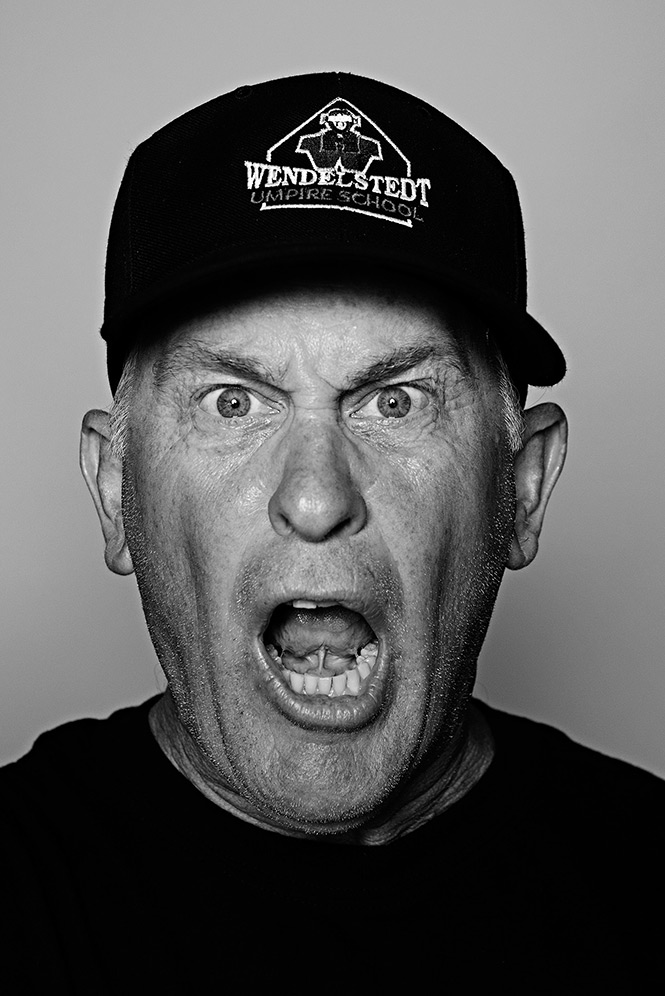 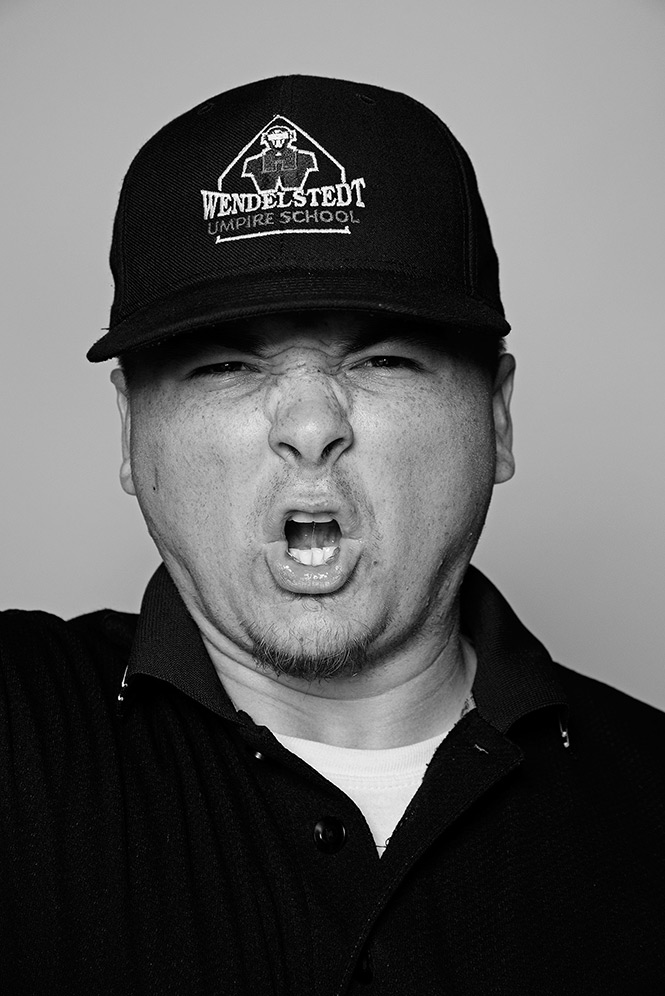 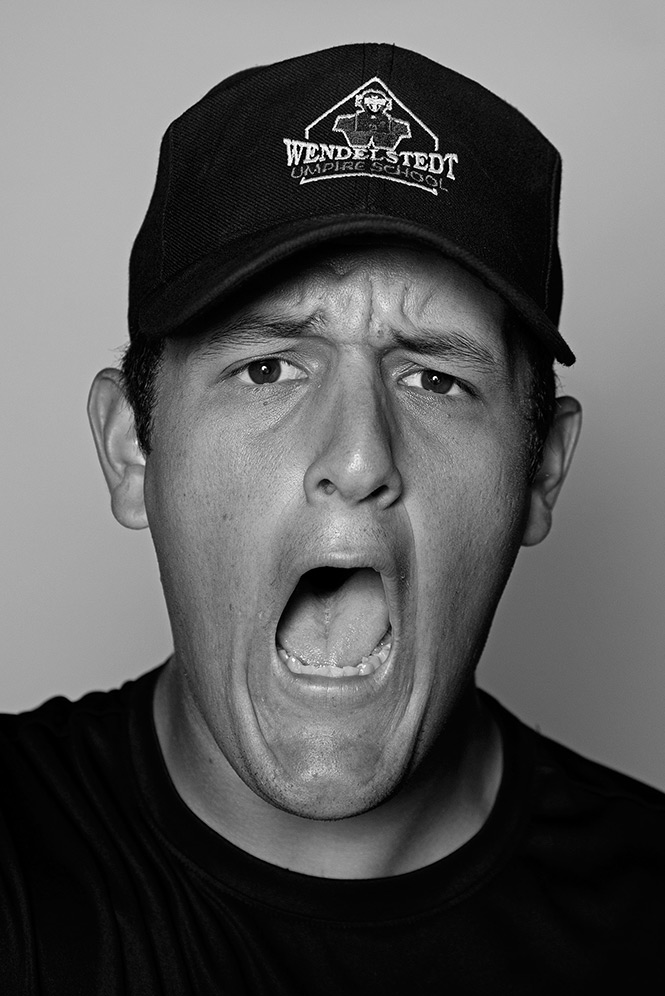 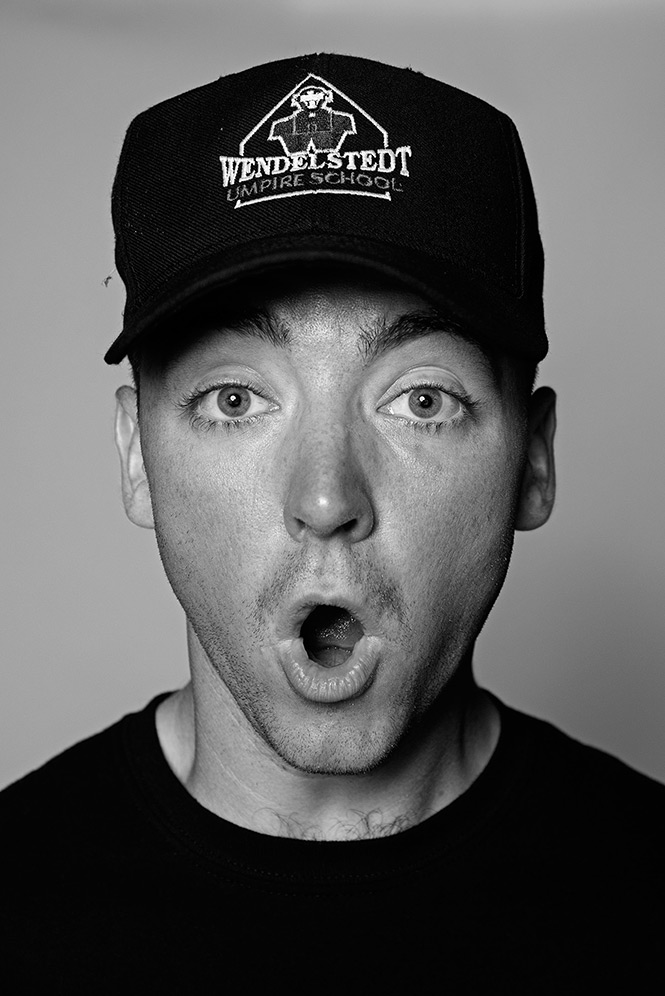 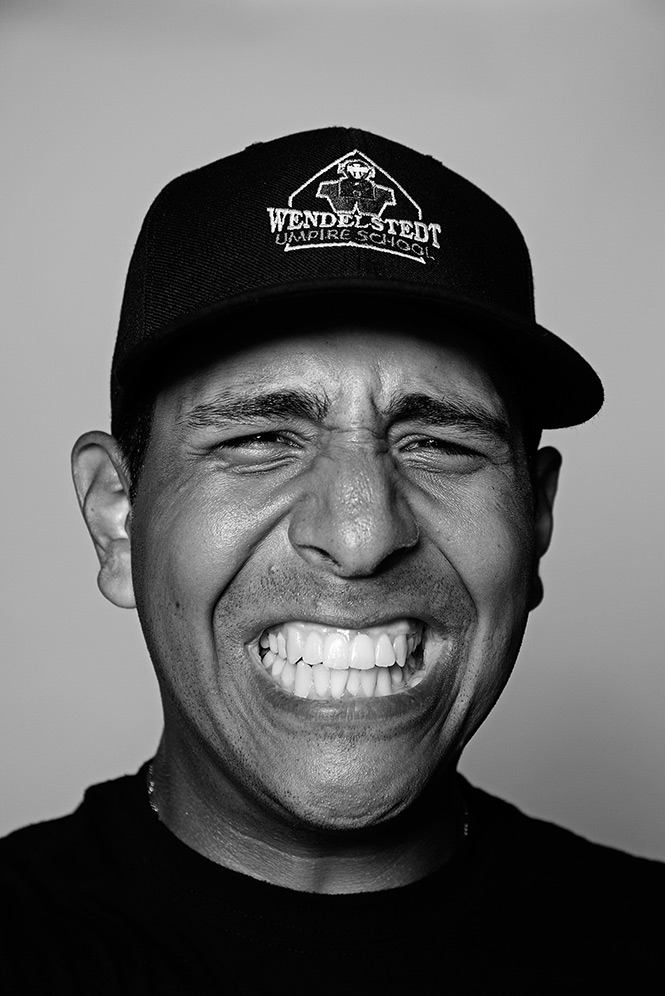 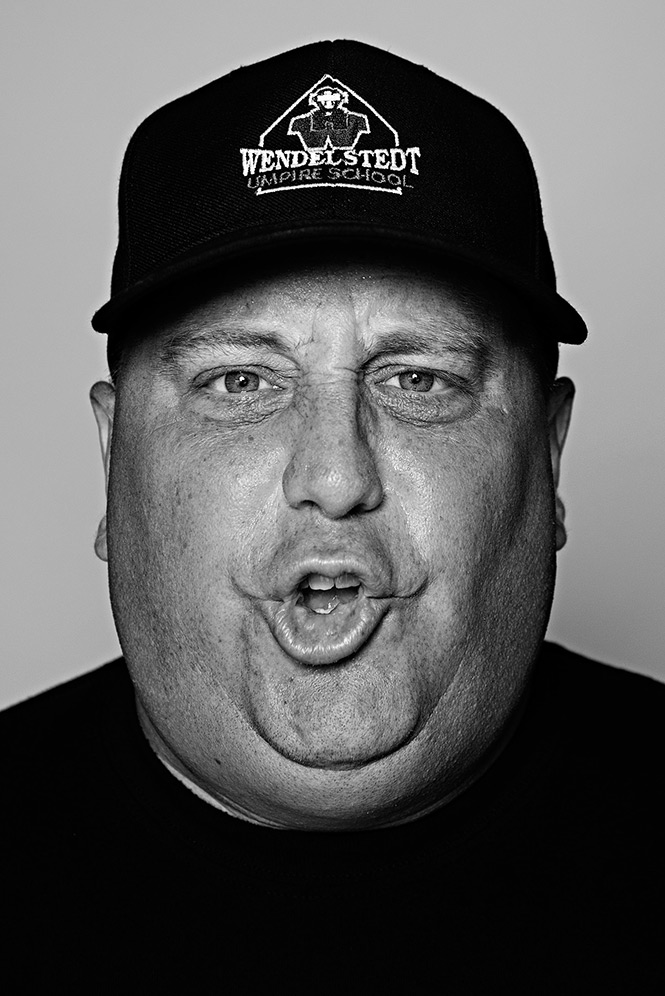 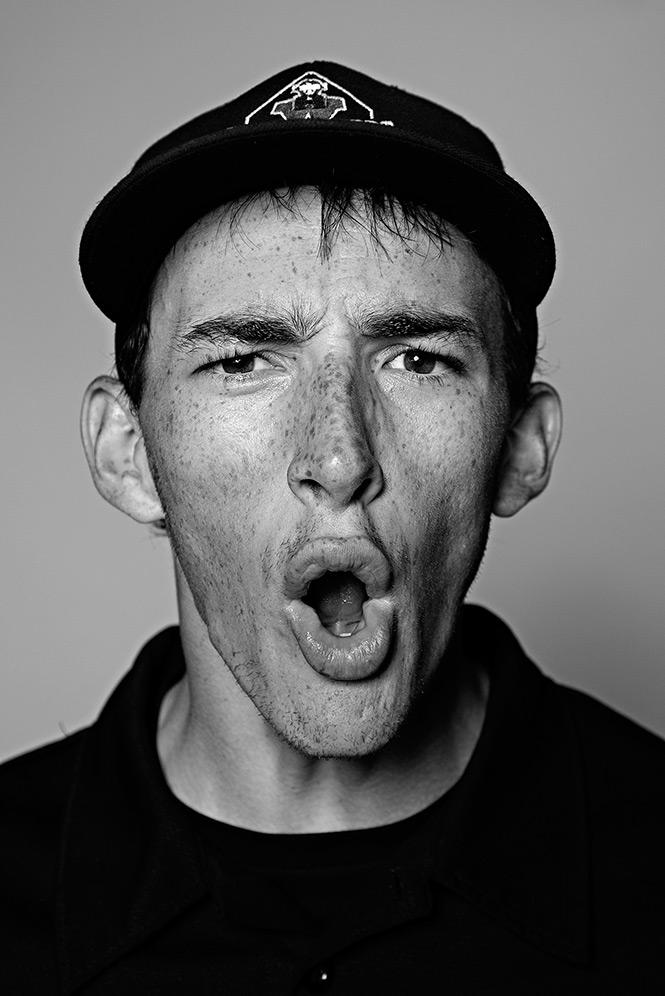 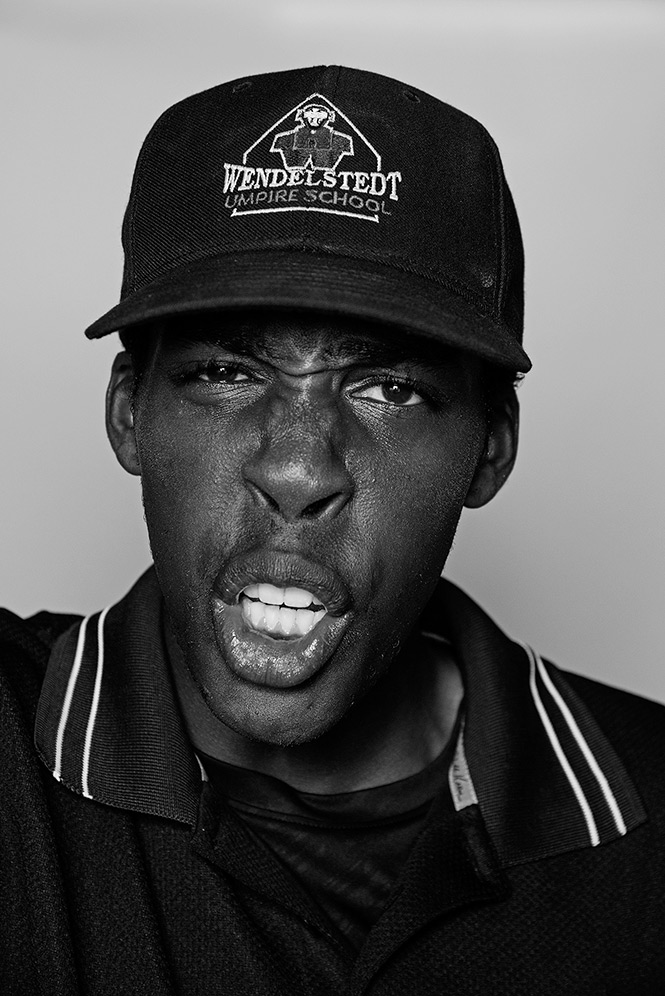 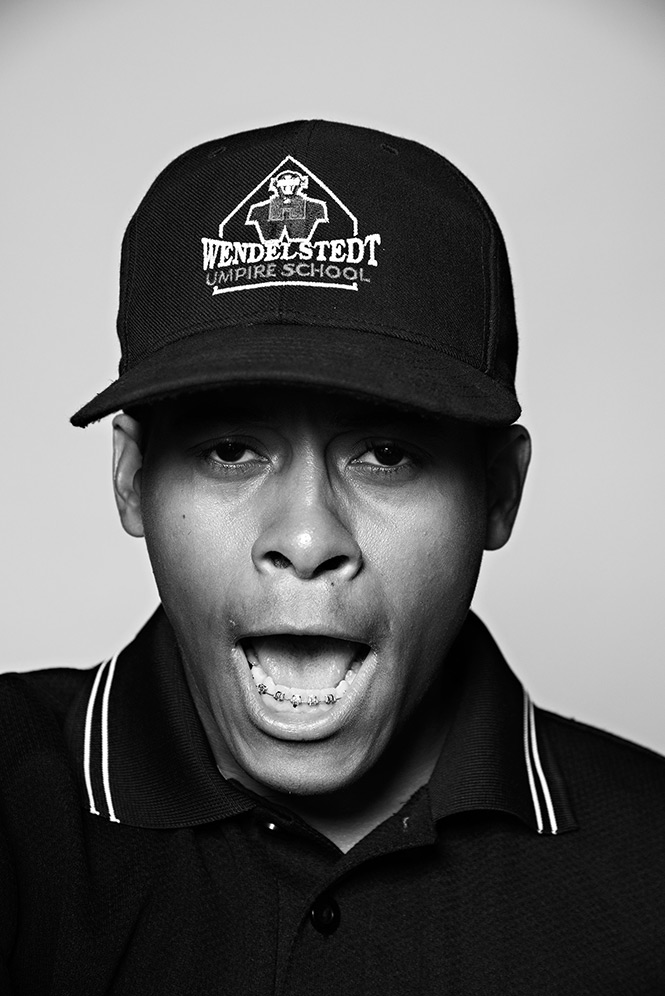 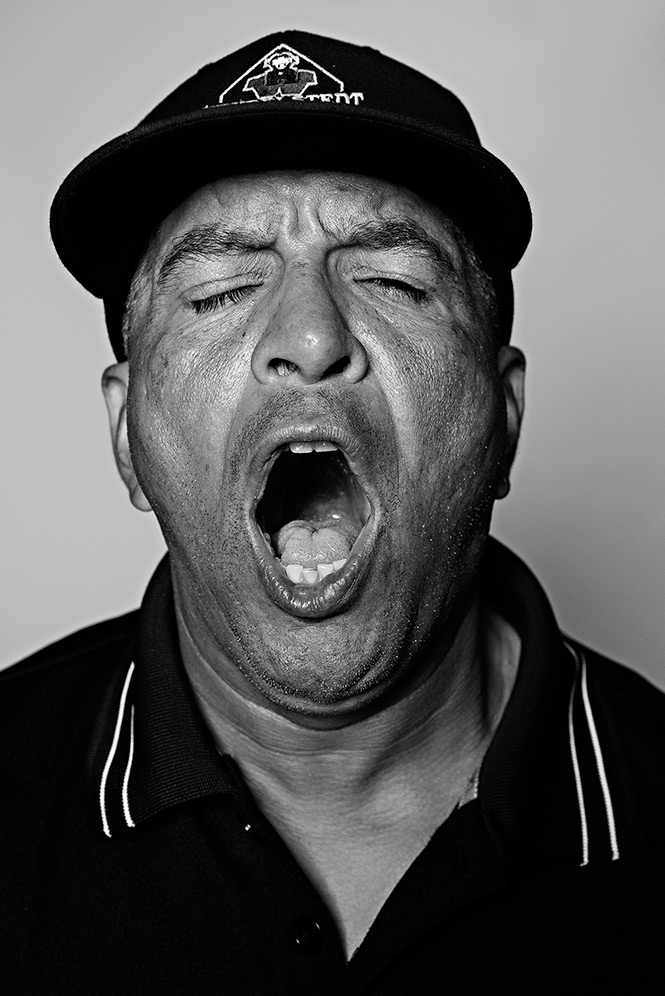 Finding their voice throughout weeks of drills, students practice their best "Strike 1" calls for Melissa Lyttle. 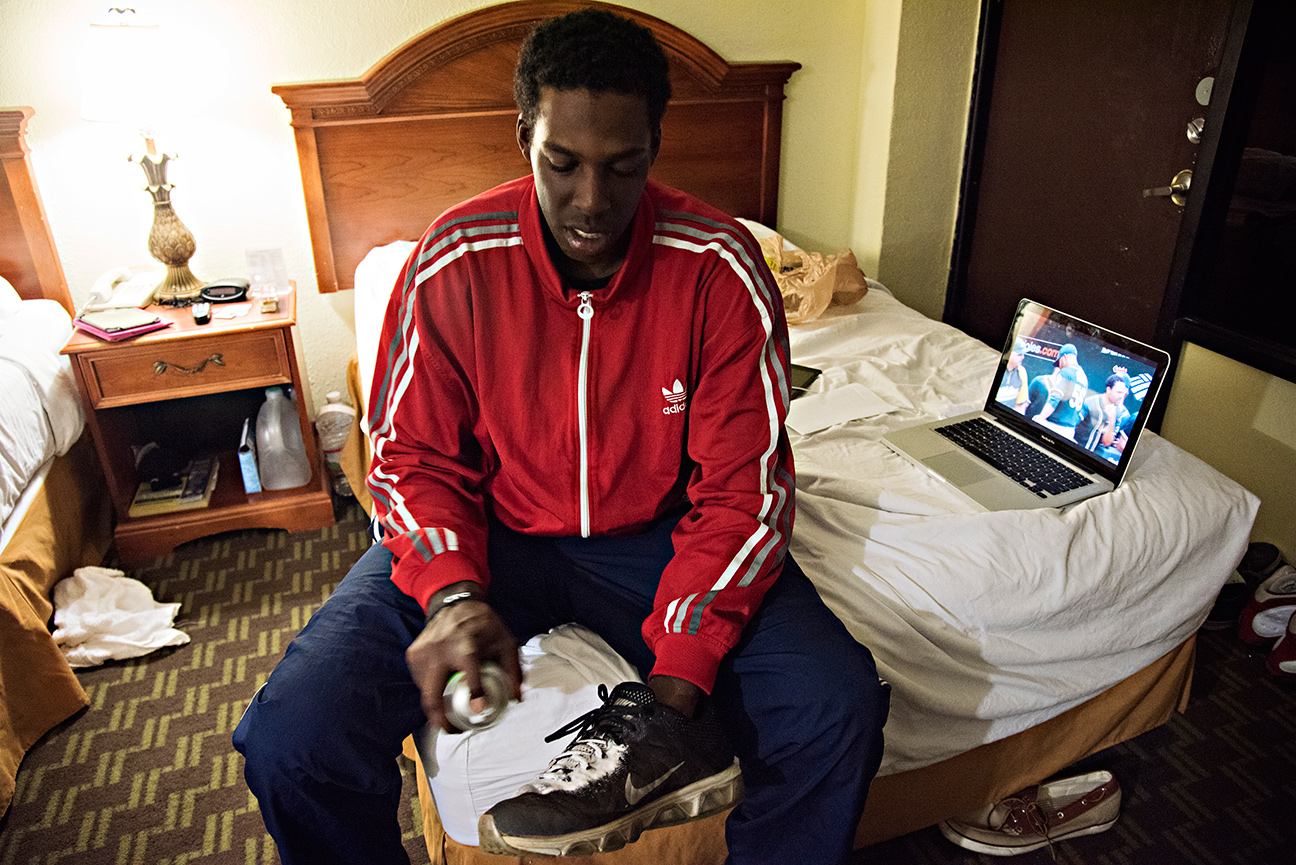 With YouTube clips of legendary umpire ejections playing on his laptop, Gerald Perry cleans and shines his shoes as he readies his uniform for the next day of school. 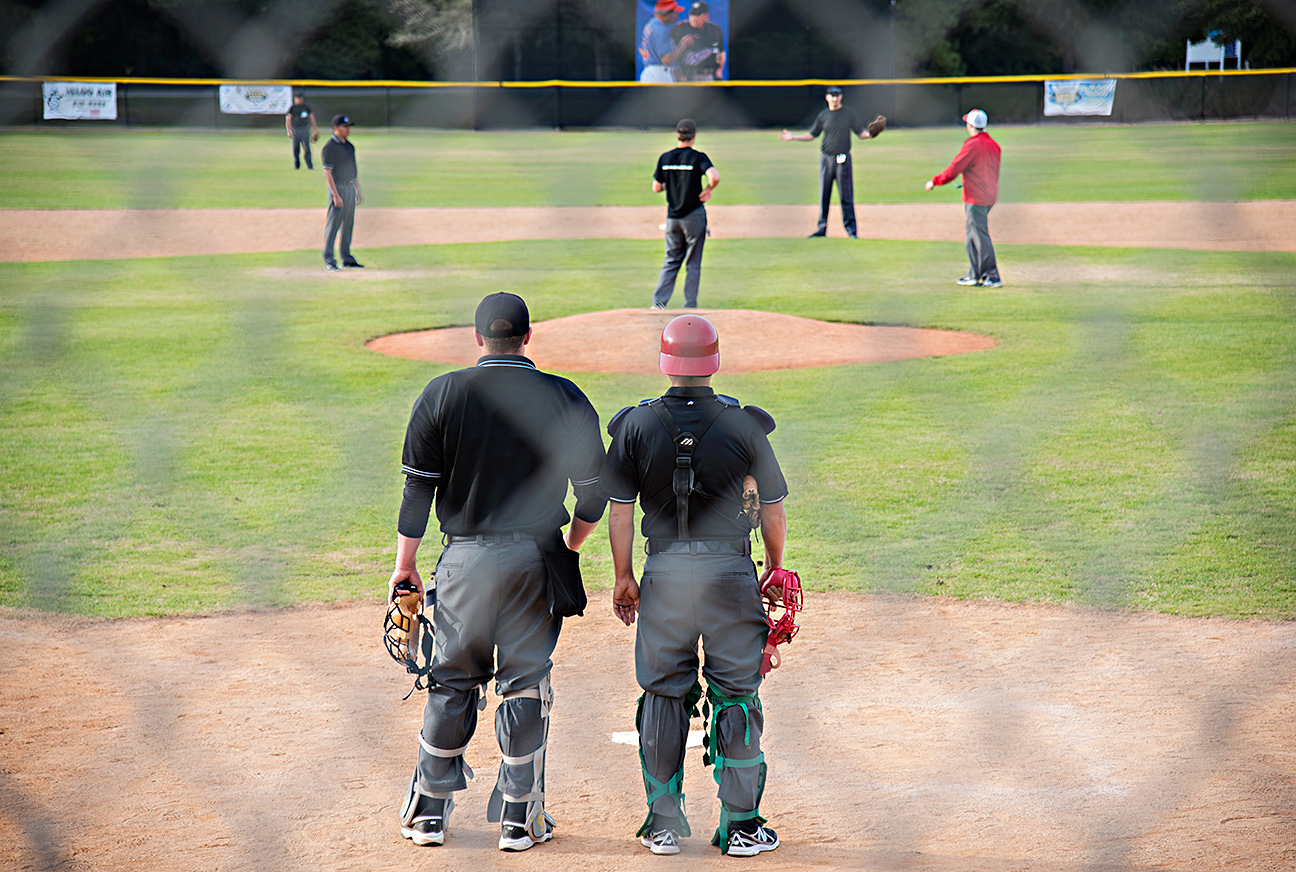 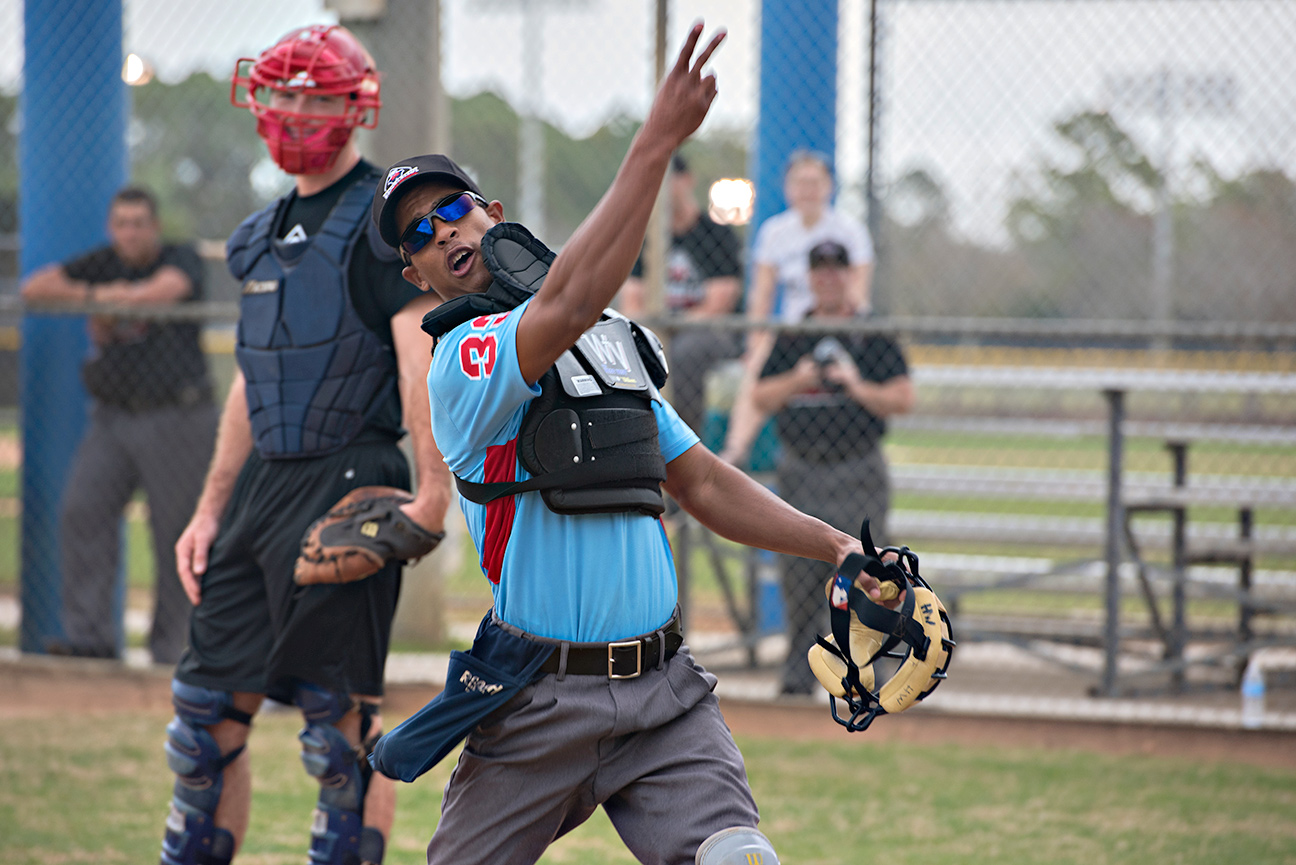 Hardlen "Harley" Acosta is the plate umpire for the first inning of an exhibition game that the students played on the final day of school. The game was an opportunity for the students to have some fun, as they ran the bases backward, managers were carried off the field by players and there were as many laughs and ejections as there were hits.

The crazy thing about this umpire school is that there's one person here that will make it to the major leagues. One person from this class will make it.”

From left, Jared Barmoy, Avi Fuentes, Chris Graham and Ricky Green share a toast with paper cups of water before taking the field for their exhibition game on the final day. 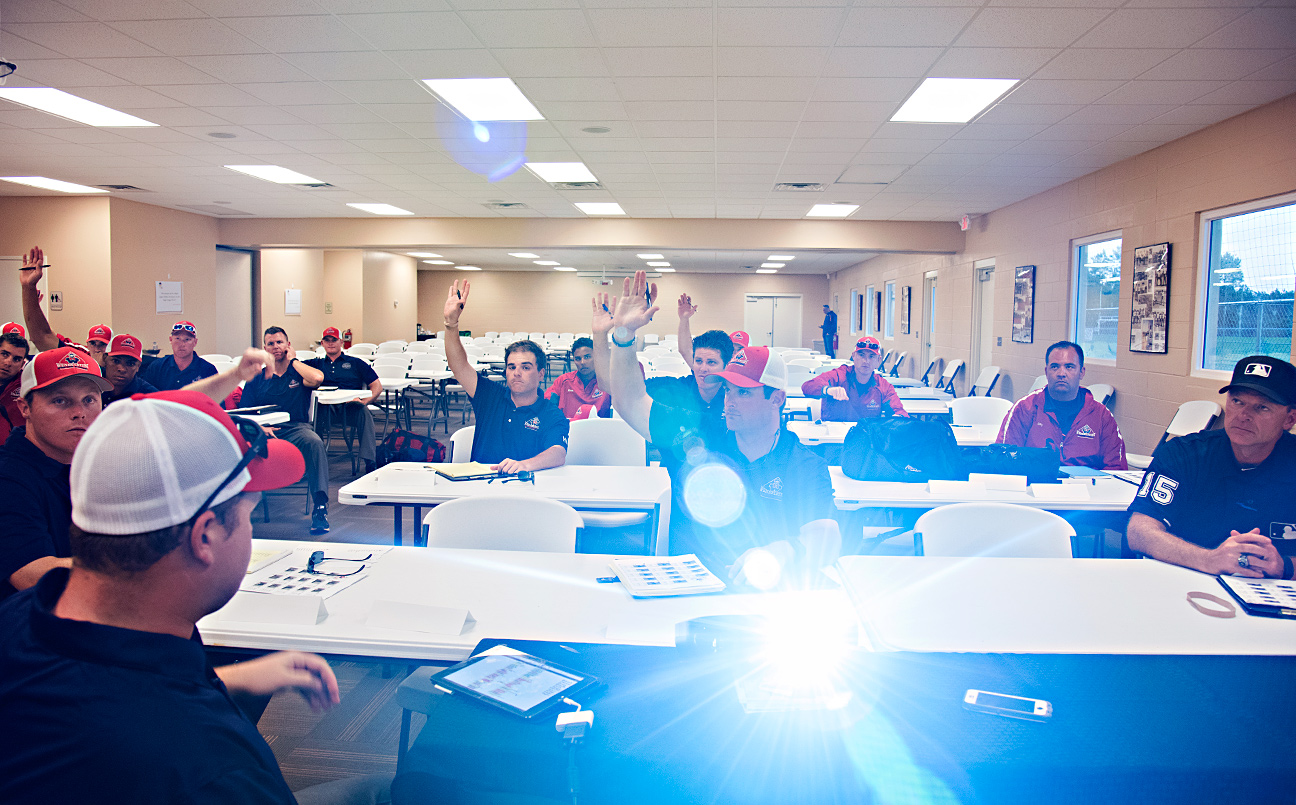 After the last full day of umpire school, the instructors gathered in the classroom to discuss their top students and vote on who would go on to the next level, where ideally they would be offered a job as a minor league umpire. 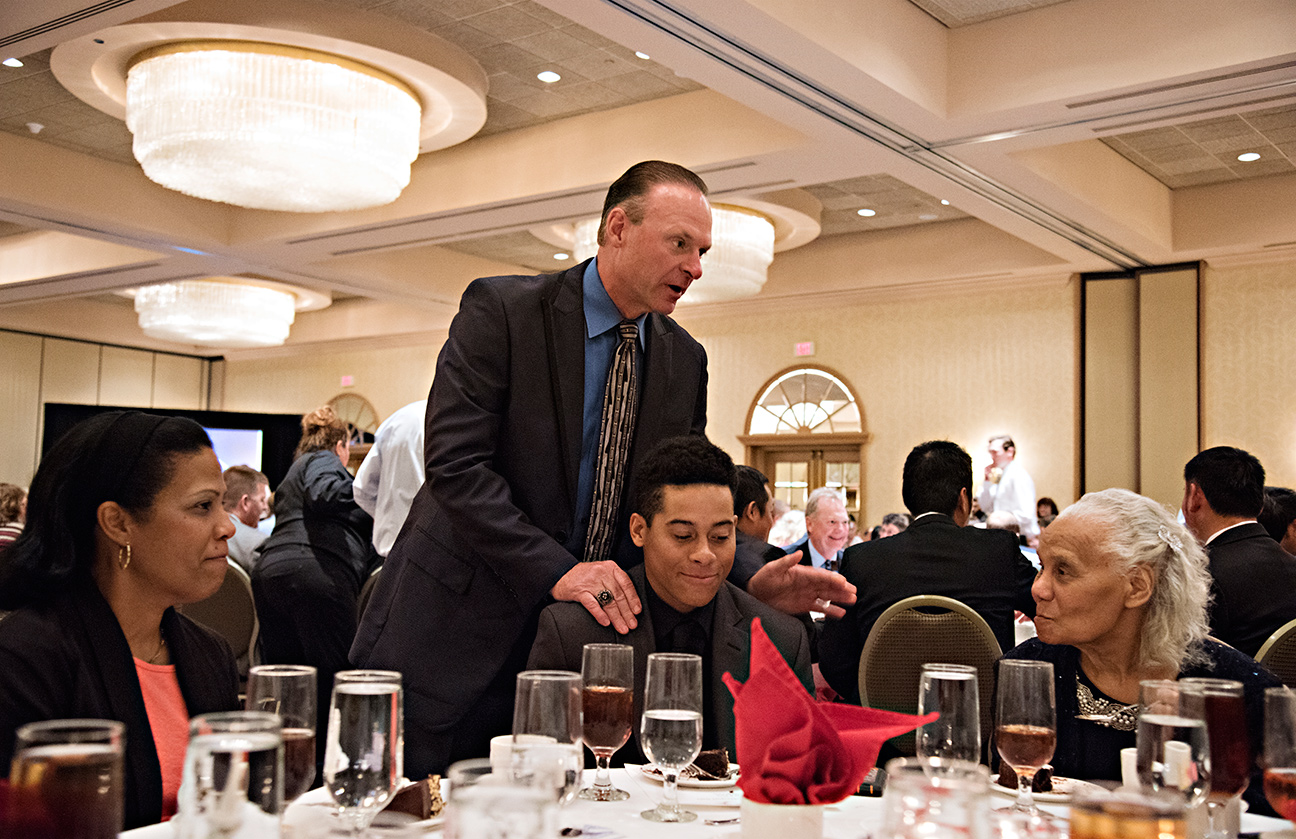 Ed Hickox, a major league umpire since 2007, stops by to say hello to Avi Fuentes and his family during the graduation banquet. 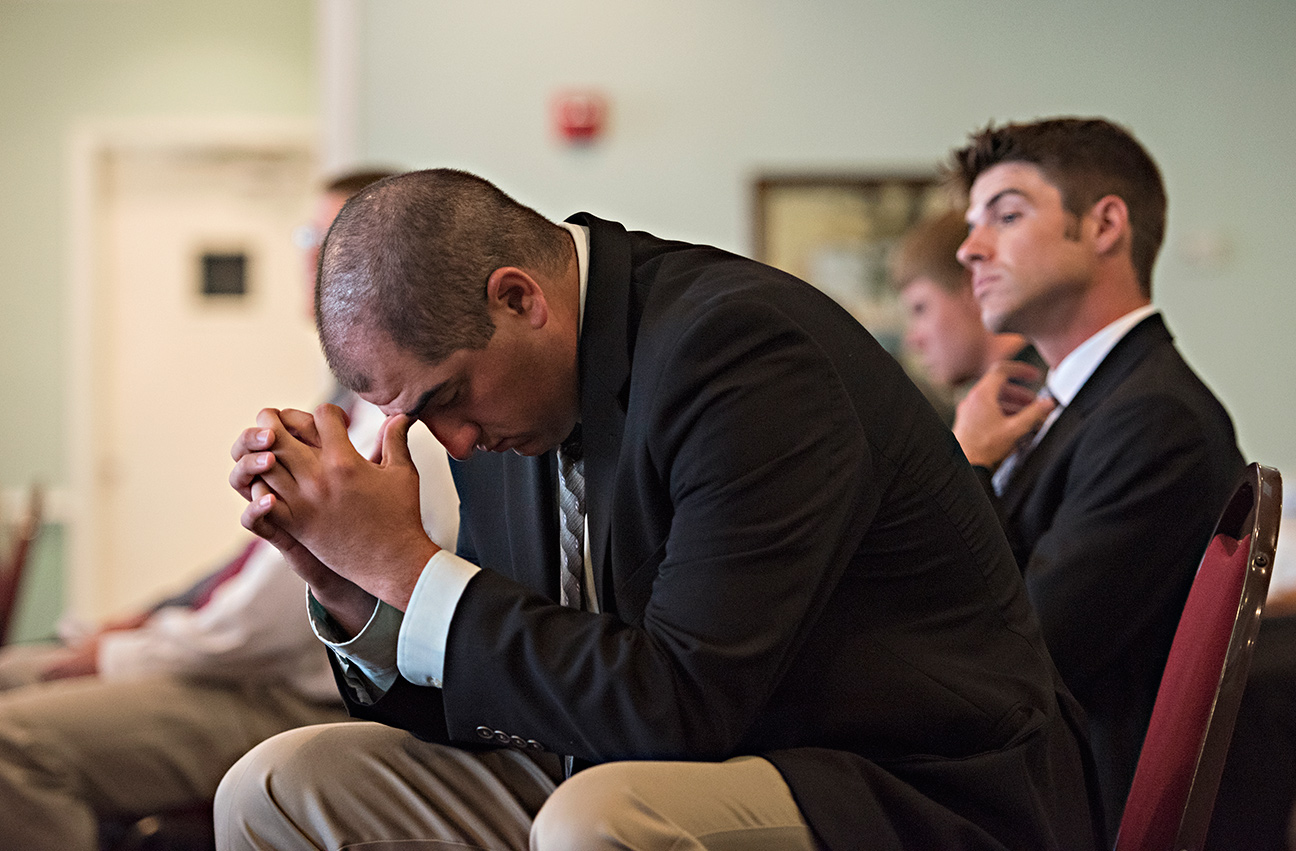 The day after school ends is the most nerve-racking, for both the students and the instructors. Evaluations are given, determining which students advance to the next step in the process of becoming a professional umpire. Tom O'Neil anxiously awaits his evaluation in hopes of being one of the students who made the cut. 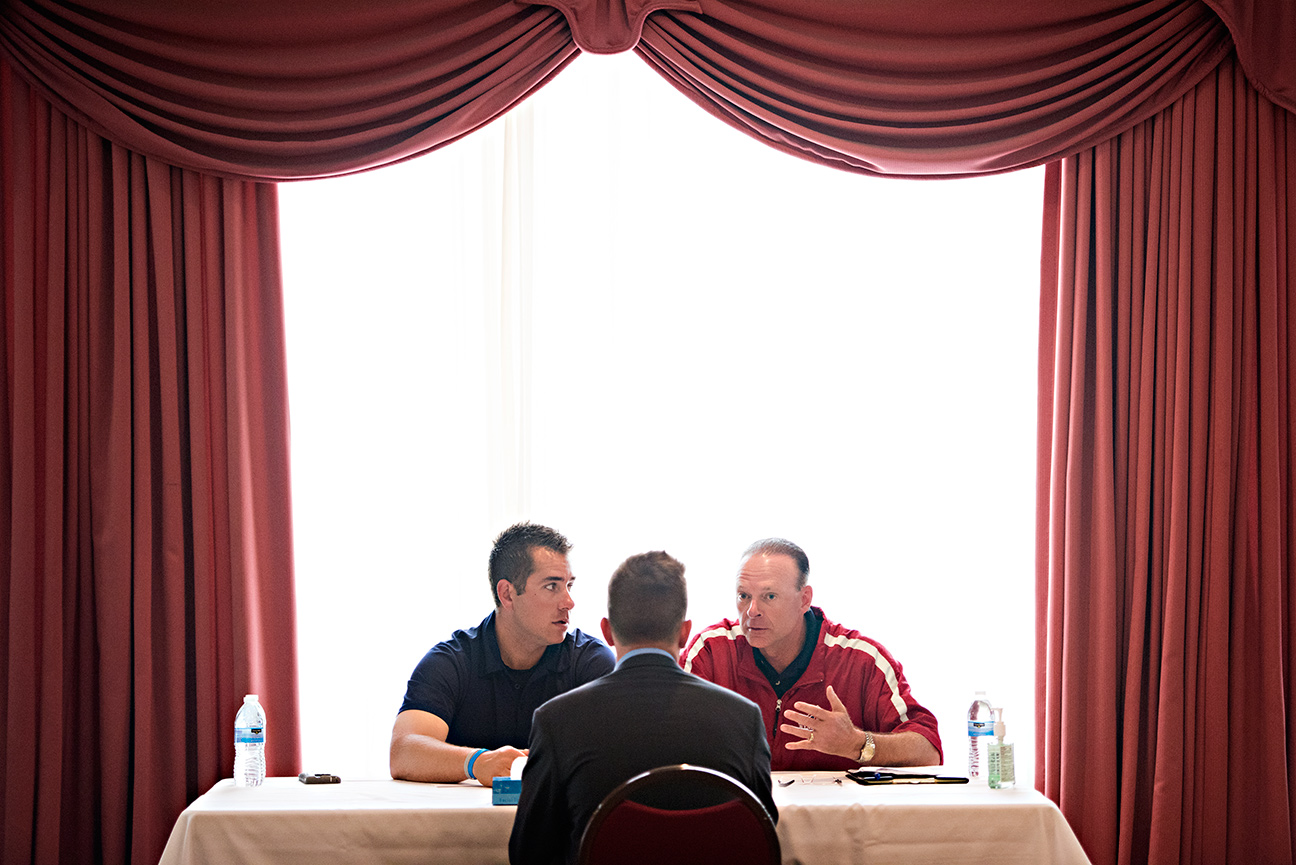