n a Tuesday afternoon in January 2007, then-Timberwolves coach Dwane Casey gets a call in his room at the Hotel Monaco Portland in Portland, Oregon. His general manager, Kevin McHale, is firing him from his dream job after only 19 months.

In an instant, Casey's needs have shifted entirely. He no longer needs a game plan for defending Zach Randolph in tomorrow night's game. What he needs in the midst of the most mortifying moment of his professional career is a way to leave the hotel with his dignity and get to Seattle, his offseason home.

Enter Joseph Sundberg, the Monaco's bell captain and the NBA's Winston Wolf, fixer of all.

"He was the first person I saw after the call. I knew he'd take care of it with one conversation," Casey says. "He's reliable -- whatever you need, whenever you need it."

From the moment that NBA teams arrive at the hotel, Sundberg runs the show. It's both a logistical and intimate endeavor. It's the competence to ensure every piece of luggage in the traveling party of 45 to 60 finds its way to the correct room in 15 minutes, and the compassion to know that the NBA is a very personal business.

For the better part of their year, hotels are the primary interior in an NBA life. Players and team personnel spend maybe five hours at arenas, and that's only on game days. The rest of their time on the road -- both waking hours and sleeping ones -- is spent in a hotel. It's not home, but it's where they take refuge and where their needs are met.

It's a business, but one infused with trust. Trust that a room service meal won't upset a player's stomach before tonight's game, trust that a front-office clerk won't dish if she overhears an argument or if someone comes in a little tipsy, and trust that if any unforeseen needs surface, the hotel can respond without a hitch. Trust that even if a coach needs an emergency dress shirt in 15 minutes, someone on the hotel staff will literally give an NBA team the shirts off their backs.

This is the story of one hotel and how it has found its way into the hearts of NBA teams. In late February, the Houston Rockets checked in for a three-day stay, and this is how it went. 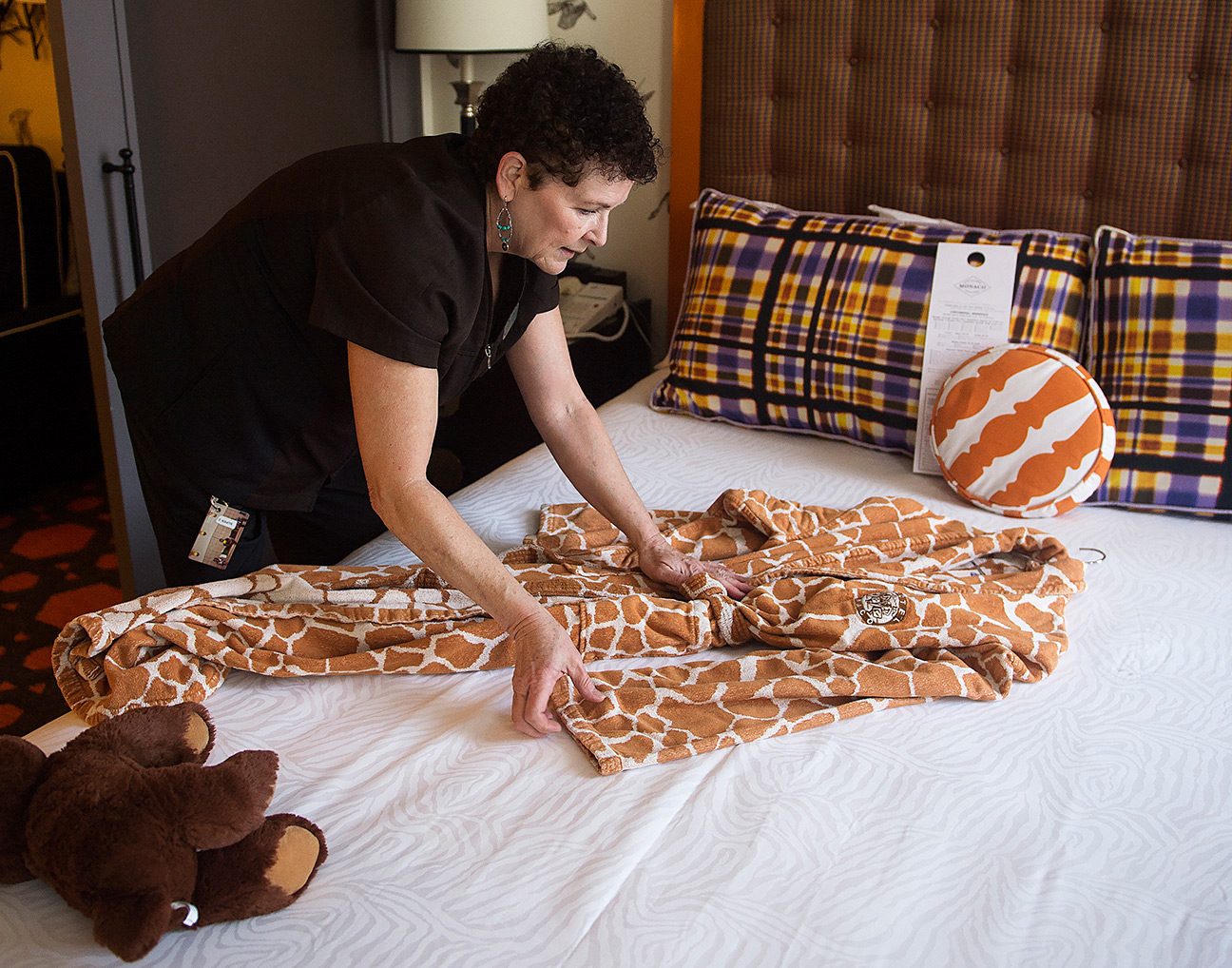 The housekeeping staff sets the stage for the Rockets' visit. If NBA teams arrive after dark, shades are drawn and lights are left on. "It's important that they're not on display for everyone when they walk in," says assistant executive housekeeper Mary Odom. Housekeepers also lay out an extra-tall giraffe-print robe on each bed and a special Rockets' room service menu on the side table. 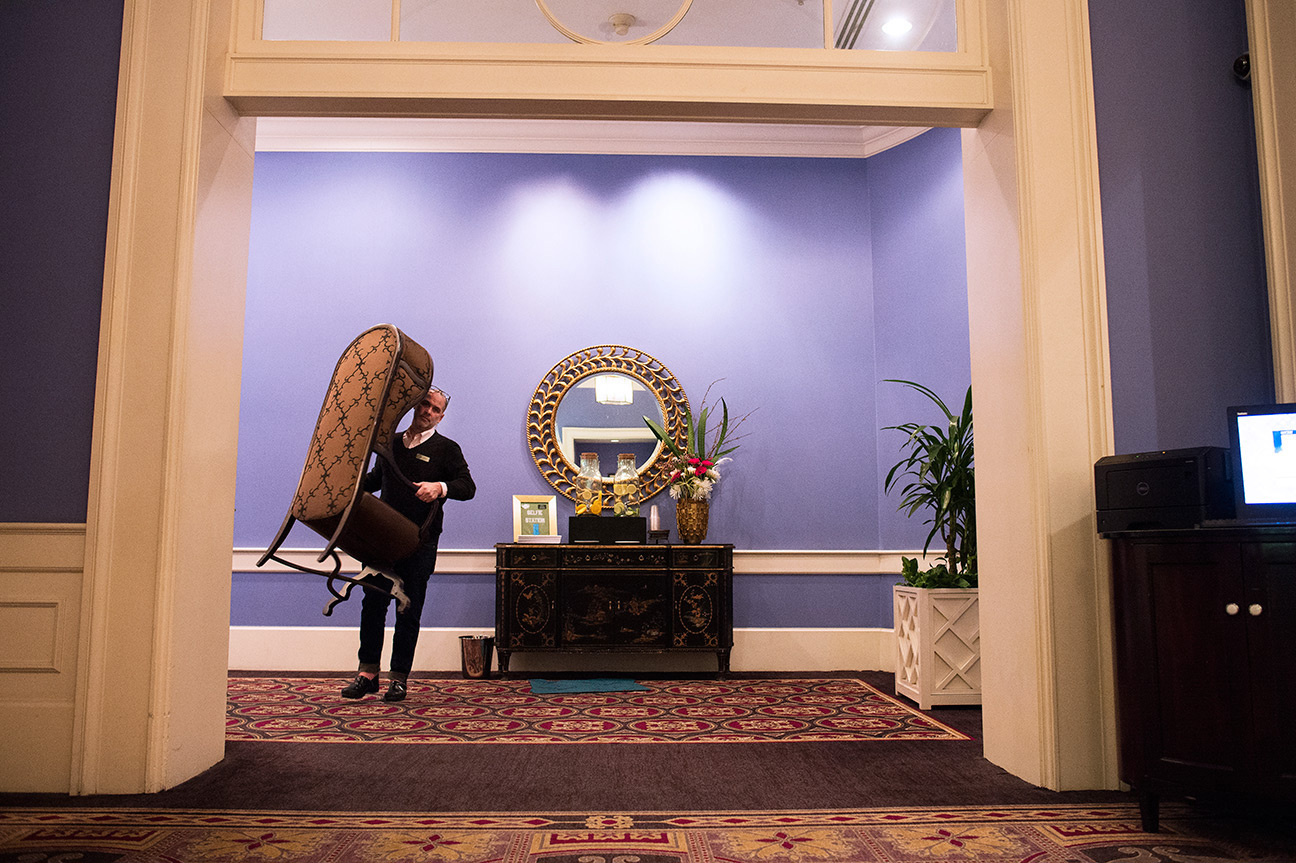 Sundberg lifting a chair during staging. "Staging" begins as the staff sets up a special pre-registration table alongside the front desk, something akin to where you'd find your seating card at a wedding. On the table rest alphabetized envelopes, each printed with the name of a member of the Rockets' traveling party. James Harden, Dwight Howard, Ty Lawson (now with the Indiana Pacers) and Josh Smith are missing -- they're under aliases we'll protect in this feature. While envelopes are being arranged, Sundberg and four members of his staff begin clearing out furniture to make room for all the incoming luggage, which will be set in the gallery area, an alcove off the lobby that Sundberg's crew will use as a transfer point between the bus and the room. 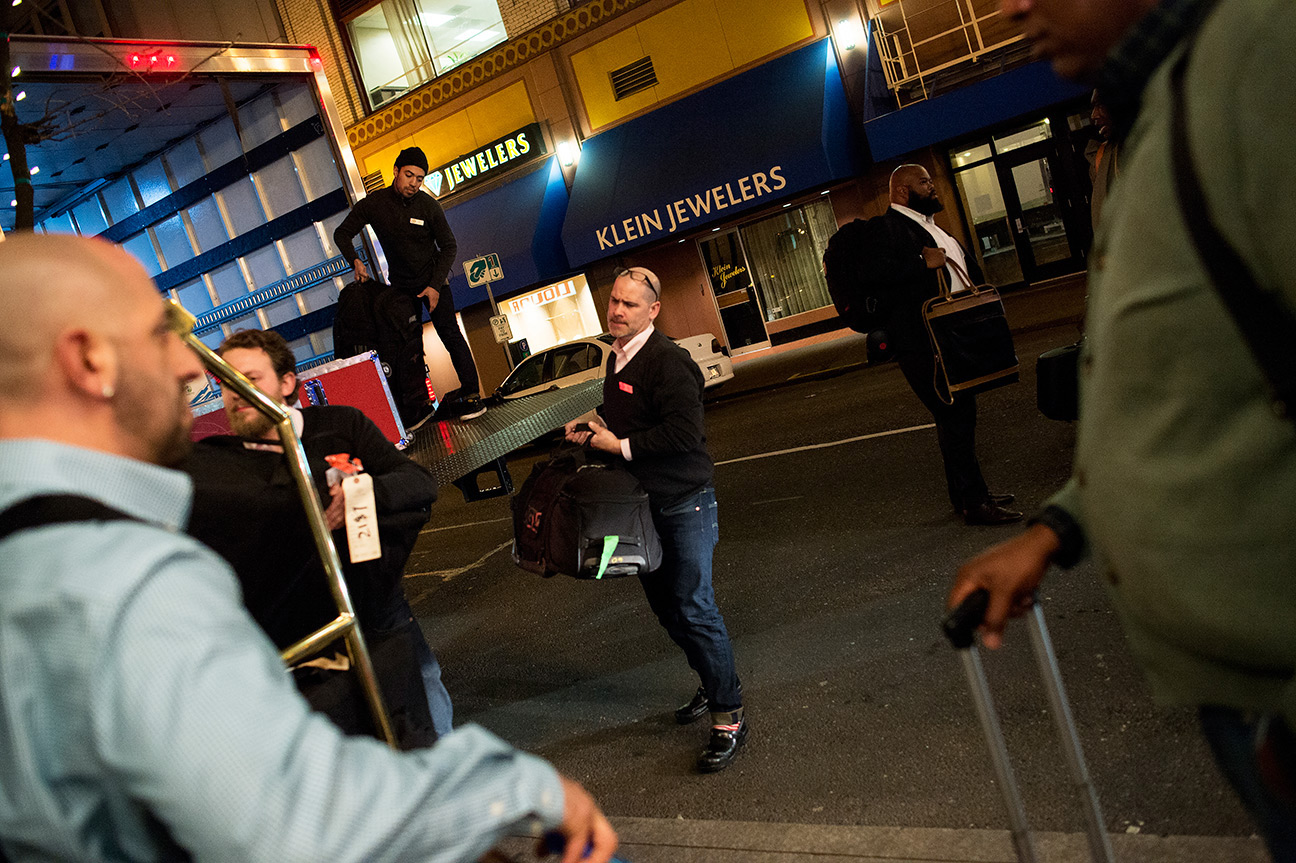 A text from Rockets equipment manager Tony Nila: "Just landed." The team's initial ETA had been 11:50 p.m., but their game in Utah went to overtime. The Rockets' bus and their accompanying truck carrying baggage and gear pull up at the Monaco Portland. Sundberg and his crew kick into action. Typically, bellhops at the Monaco Portland are encouraged to be congenial with guests when they arrive. "How was your trip? Where are you coming from? What brings you to Portland?" But when NBA teams arrive, you suspend the chit-chat, especially when they arrive late at night. For the next half-hour, Sundberg runs a distribution center in the gallery. Personal luggage and training equipment are tagged and marked with a corresponding room number. All that stuff is then stacked onto trolleys according to floor. Team equipment and gear that never needs to see the inside of a hotel room goes into the fire control room on the lobby level. 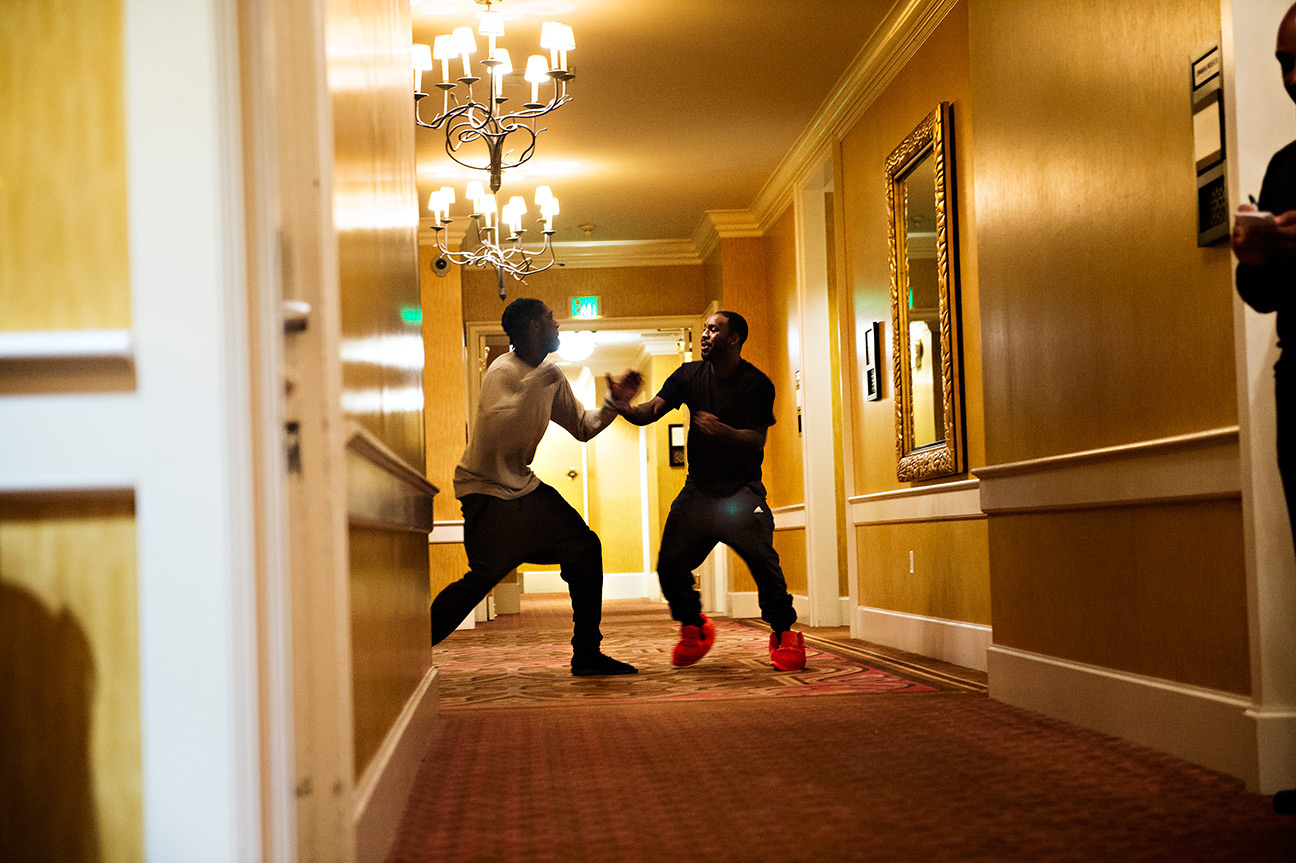 Montrezl Harrell, left, and Ty Lawson roughhouse in the hallway. Players rarely occupy more than one-third of a team's block of rooms. The coaching staff is good for eight rooms, while the training and equipment staff claim another 10 or so, as do broadcasters and their production crew. That still leaves public relations, the team's director of security, possibly the general manager, owners or top brass from the business side. 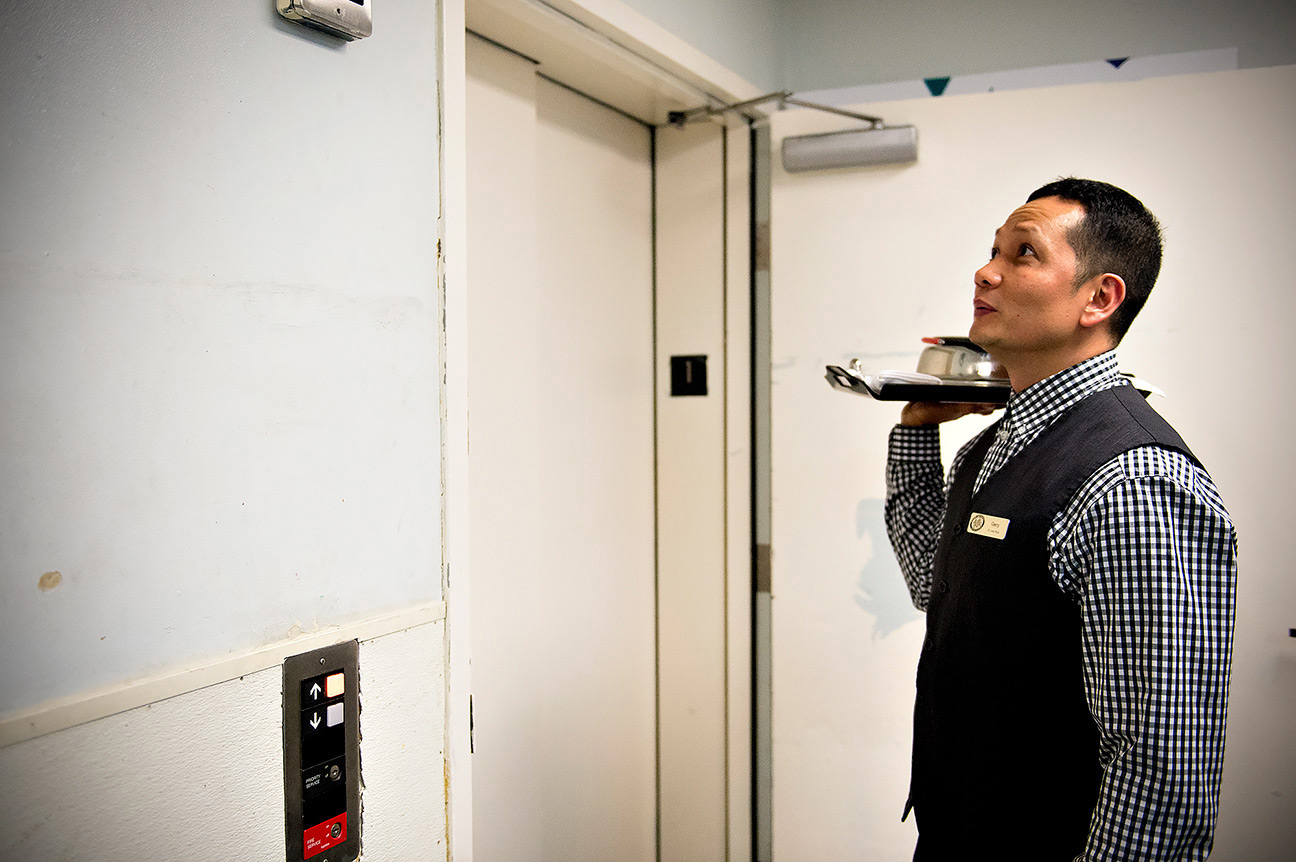 The kitchen gets its first room service call, for chicken Alfredo. Hotel Monaco assembles a special 24-hour room service menu emblazoned with the visiting team's logo based on its own crowdsourcing of NBA players' requests over the years. "Chicken fingers are a must," says Jones. "They also love pasta with Alfredo sauce and burgers. They travel constantly and likely just want something that reminds them of home." 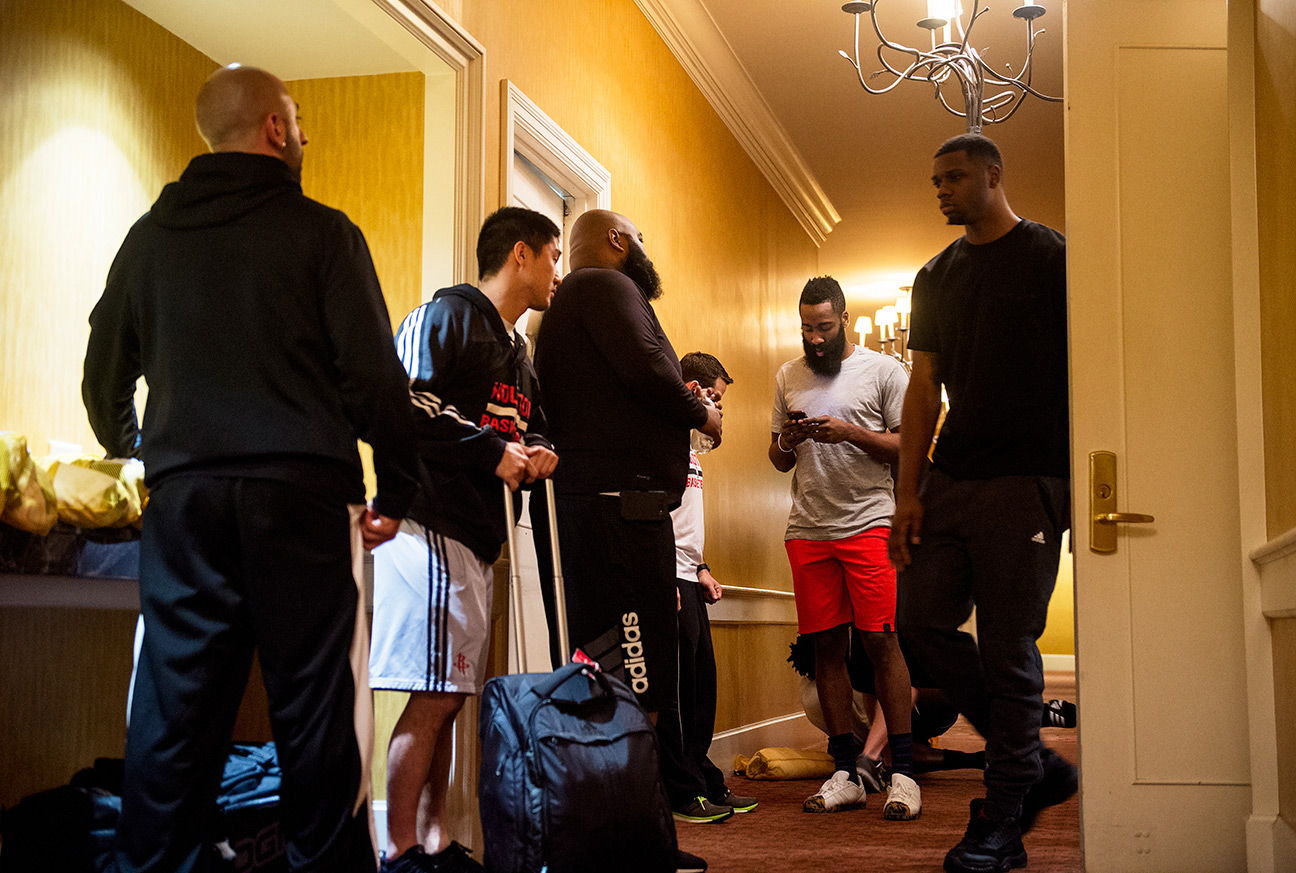 Team and staff members of the Houston Rockets gather in the hallway of Hotel Monaco Portland in advance of a team breakfast on Feb. 24. Whether they prepare them in-house or forage for food from an off-site restaurant, the staff at the hotel arranges the lion's share of meals for the team during its stay. 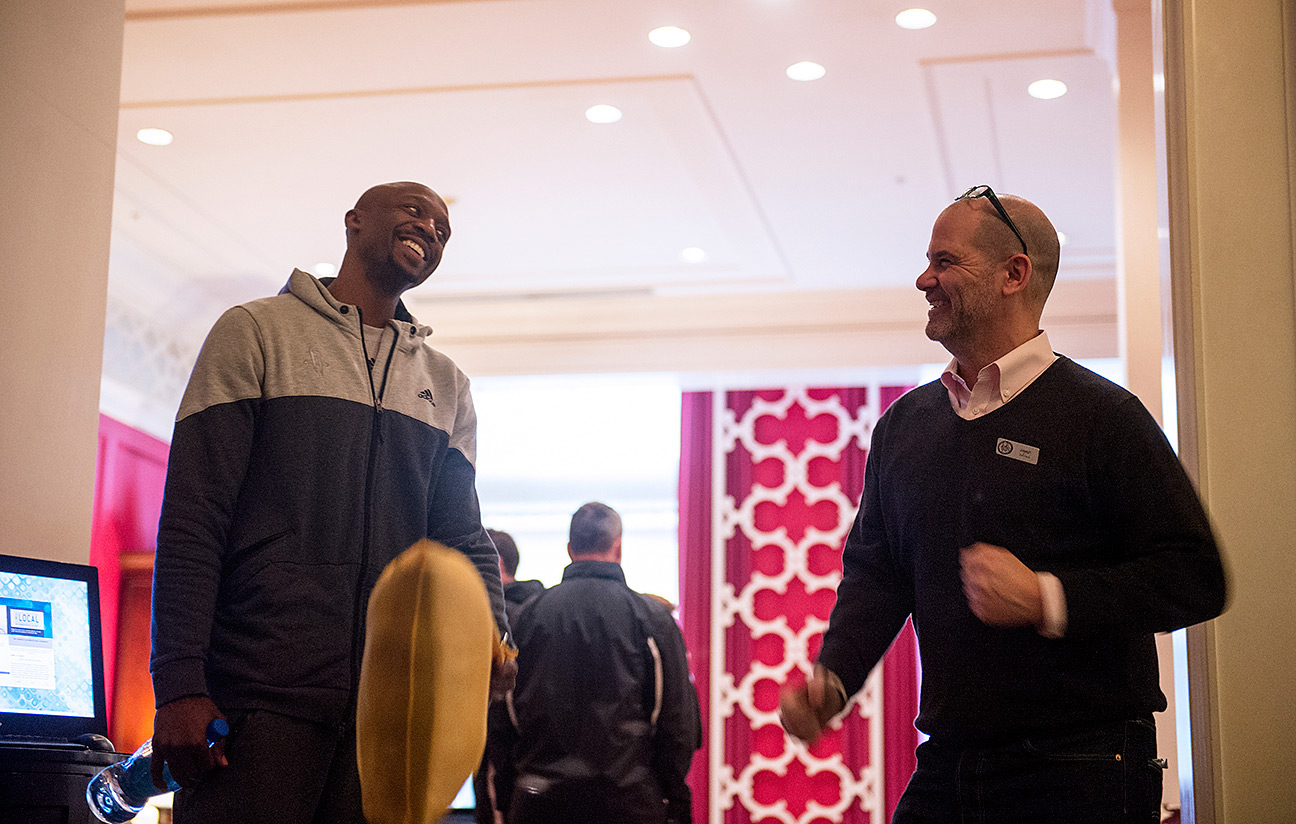 Sundberg, joking here with Jason Terry, has had opportunities to rise in the ranks of Kimpton Hotels, the boutique chain that owns and operates the Monaco Portland. But he says that he's more than happy to remain in the position he has held for close to two decades, during which time he has essentially grown up with the NBA players he serves. 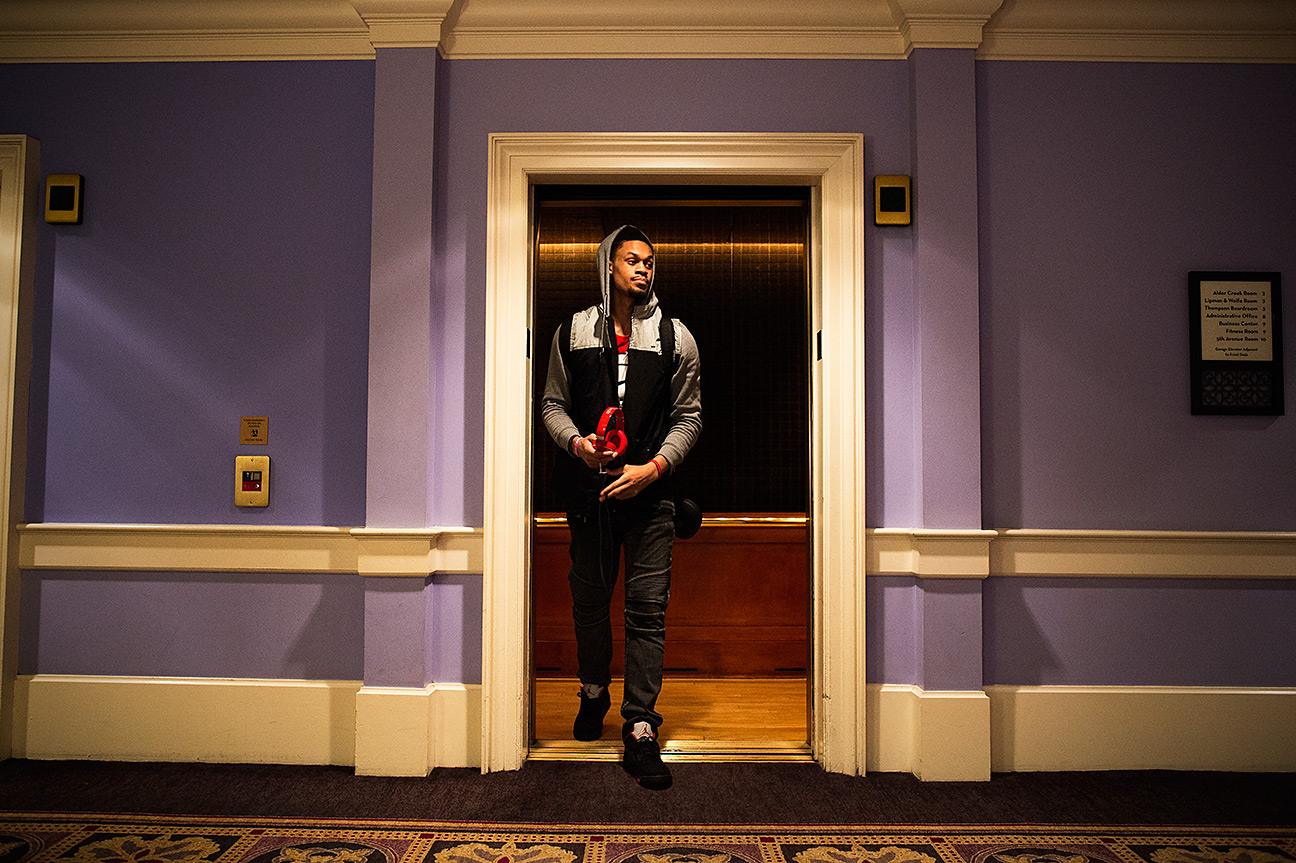 K.J. McDaniels is 6-6. To accommodate NBA players like him, many Hotel Monaco rooms have beds that are 95 inches long -- 12 inches longer than standard, and showerheads that are 8 inches taller than the standard 6 feet. "I'm 6-7 and like to sleep diagonally," says Rockets forward Trevor Ariza. 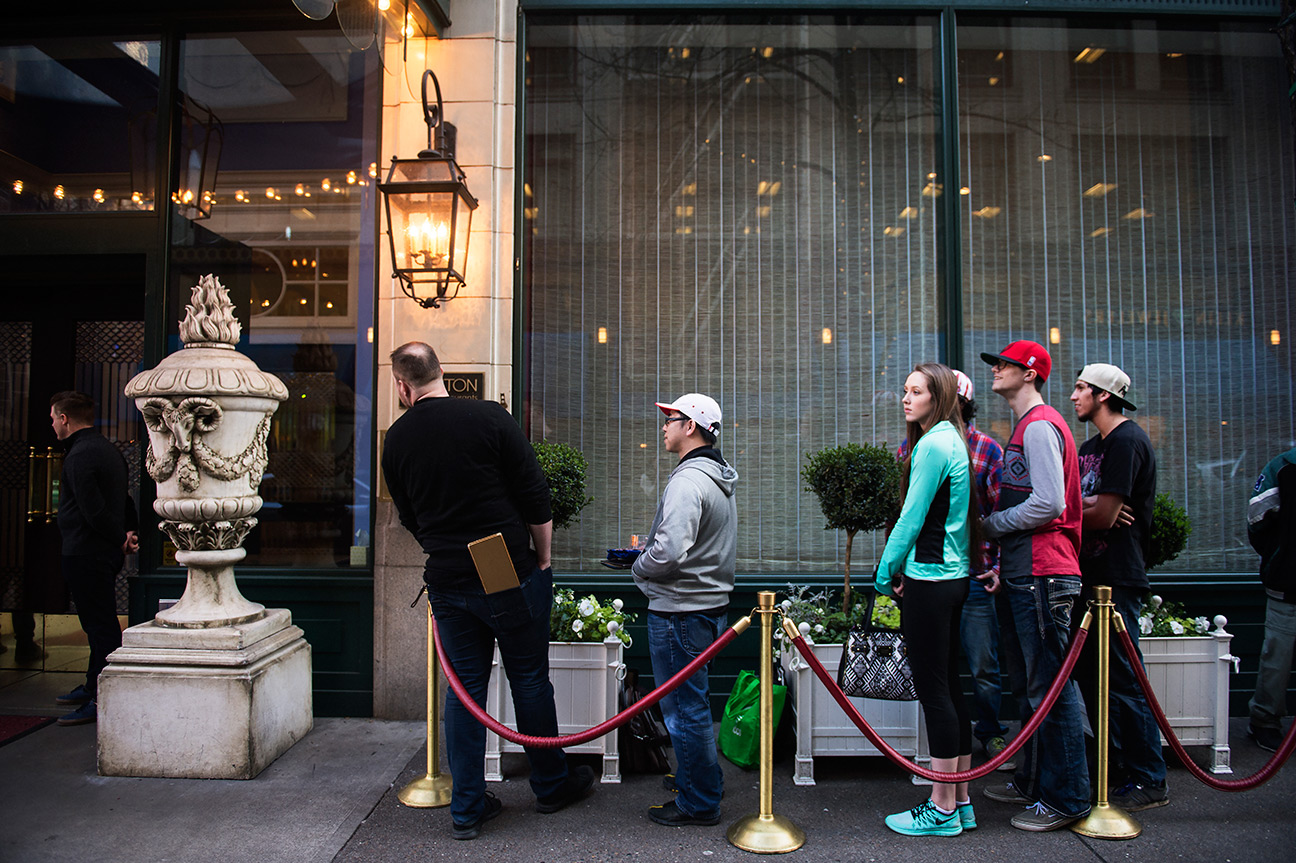 NBA players draw NBA fanatics, which means Sundberg and his crew have to keep the autograph-seekers at bay. "They're always aware of who's coming and going," Sundberg says. "They'll be parked in their cars waiting for the bus to arrive. They know the routine -- a team usually leaves for shootaround about 10:30 and return around 1. Some of them track the team flights." Sundberg makes a practice of not being a jerk, but he makes it known that they're not to traipse in and out of the hotel to use the bathroom or help themselves to the complimentary happy hour. "It's a matter of being tactful with them, but letting them know I need to make sure players can come and go from the hotel without being harassed." 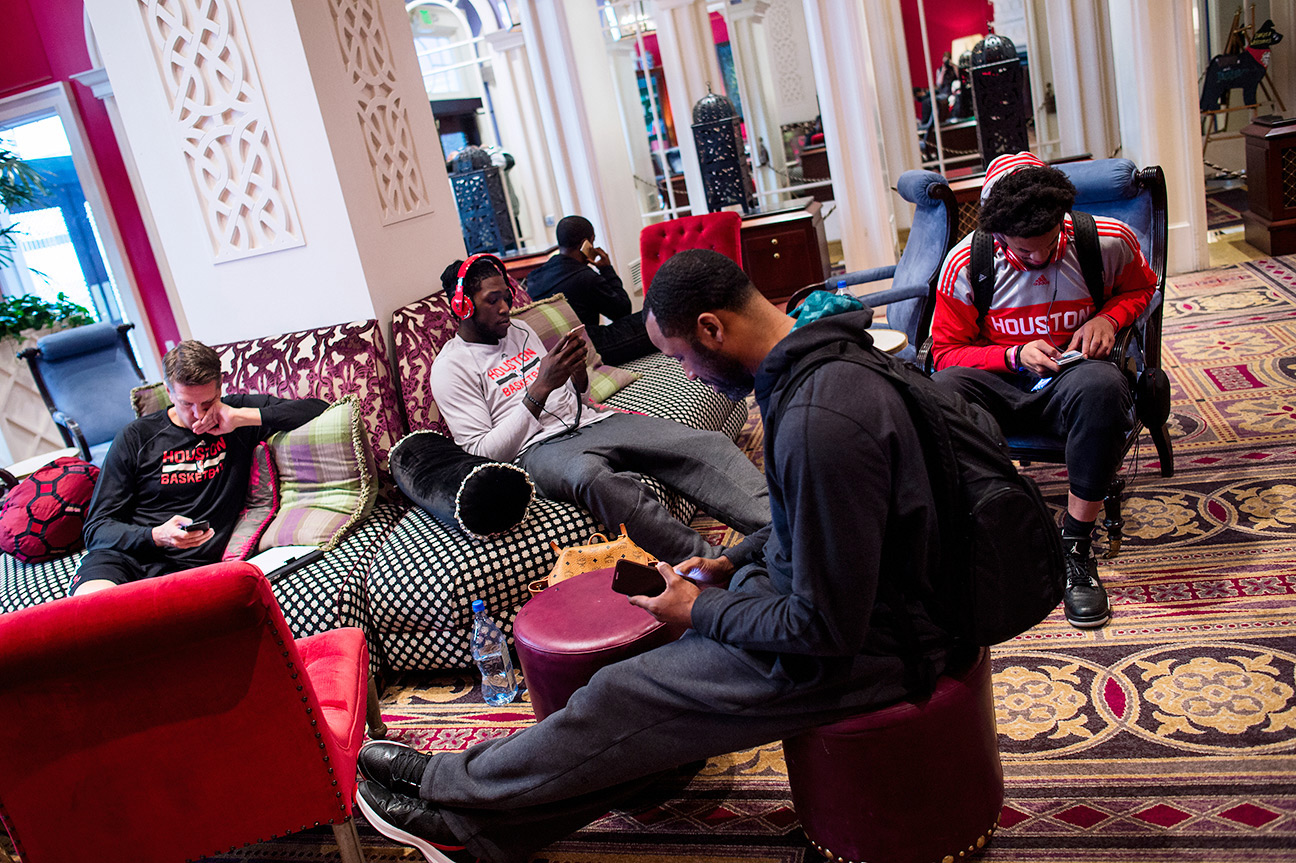 Players and coaches of the Houston Rockets, from left, Chris Finch, Montrezl Harrell, Greg Buckner and K.J. McDaniels, gather in the lobby of the Hotel Monaco, awaiting the bus to the Moda Center in Portland. Among other things NBA players look for in a hotel -- that it not be haunted. "I don't like ghosts," Rockets forward Trevor Ariza says. "The Skirvin [in Oklahoma City]. The Pfister in Milwaukee is scary, too." 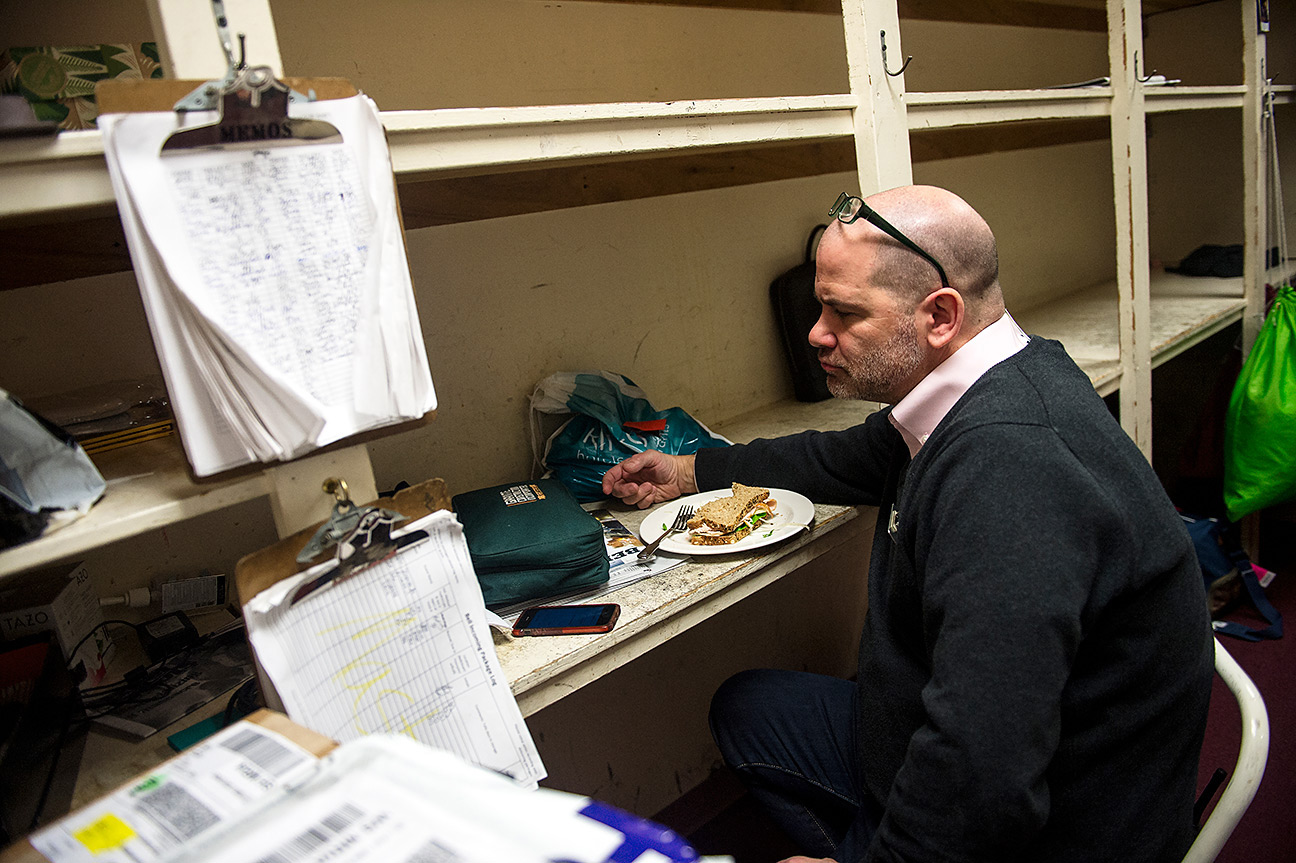 In a rare moment of quiet during the Houston Rockets' visit, Sundberg takes a moment to eat a sandwich in the back closet that is his makeshift office. Sundberg has a faintly hipster quality (reading glasses resting atop his shaved head; dark V-neck sweater; cuffed jeans; clunky, black wide-toed leather shoes) rather than the goofy, classic Grand Budapest Hotel getup still favored by many hotels for their bell staff. He's co-founder of the Portland Craft Beer Festival (the festival's site lists him as the Poobah of Public Relations and Marketing). 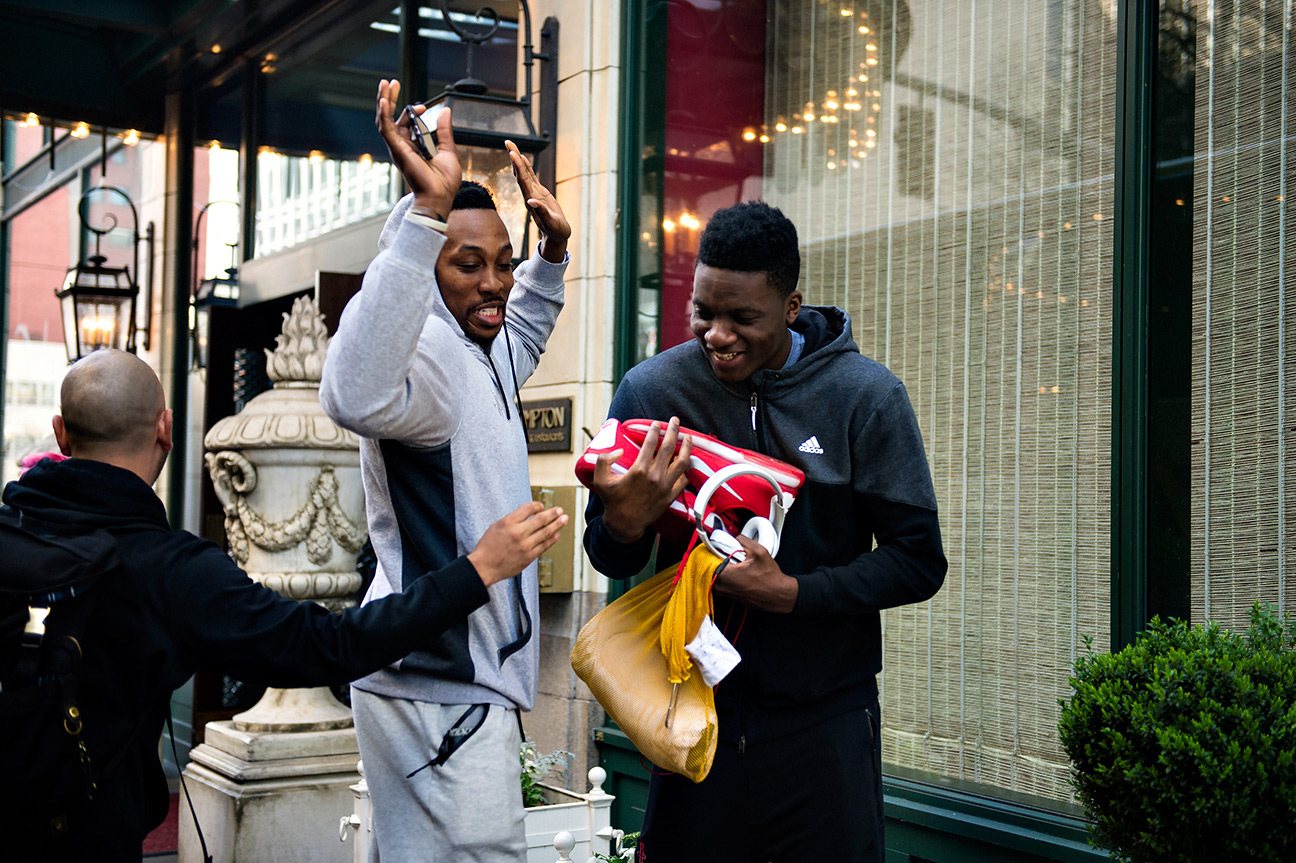 Dwight Howard jokingly tries to prevent Clint Capela from getting his shoes outside of the Hotel Monaco on Feb. 24. Visits to Nike and Adidas, both of which are headquartered in the Portland area, are popular destinations for players while visiting the city. 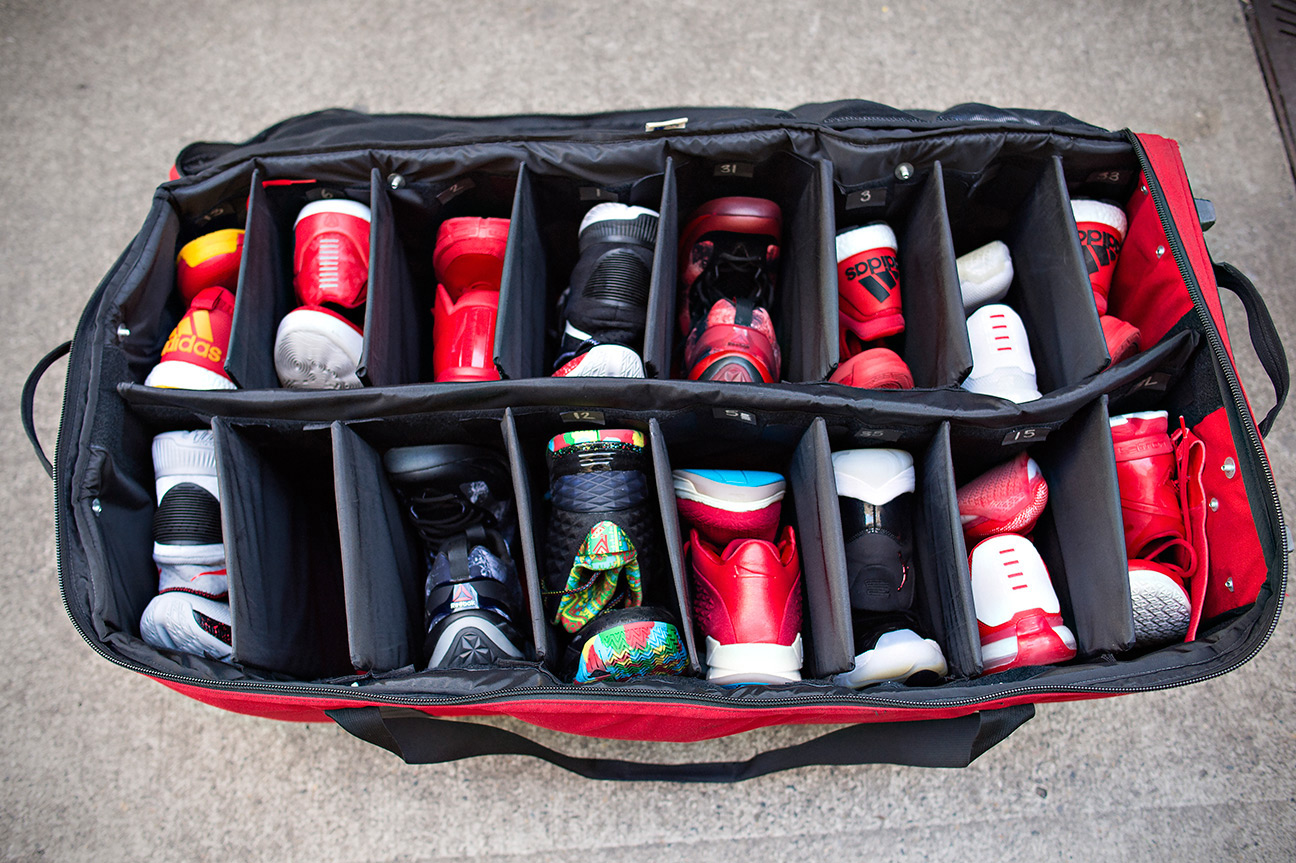 Houston Rockets players' shoes are transported from venue to venue en masse. Outside of Hotel Monaco Portland, the shoes await transport to a game against the Portland Trail Blazers at the Moda Center on Feb. 25. Among the staff's many responsibilities is helping to store the team's large amount of gear. At Hotel Monaco Portland, much it is stashed in the fire control room just off the lobby. 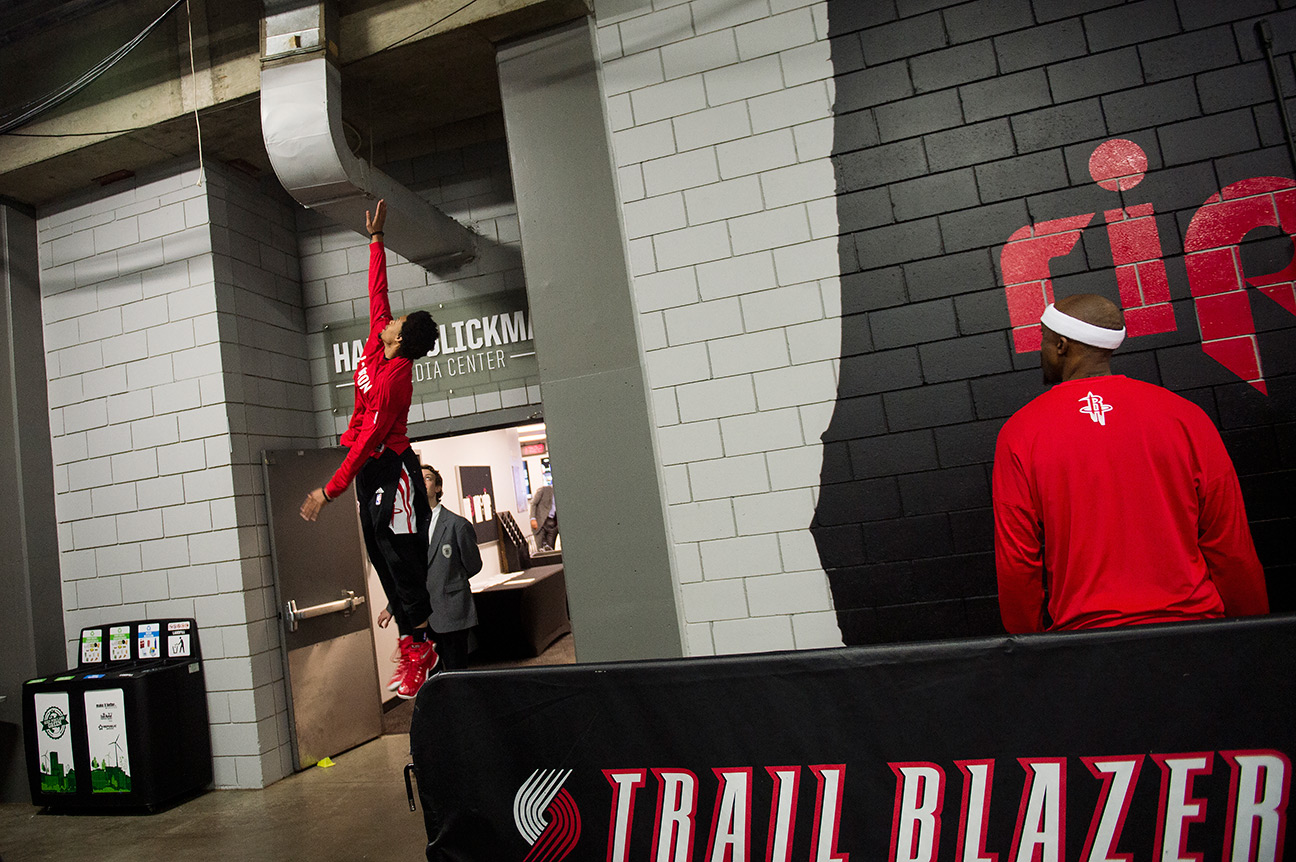 Houston Rockets player K.J. McDaniels jumps to touch an air duct before he and his teammates take to the court at the Moda Center. Traffic across the Willamette River from the hotel at rush hour was rough, and the team arrived at the arena 20 minutes later than anticipated. 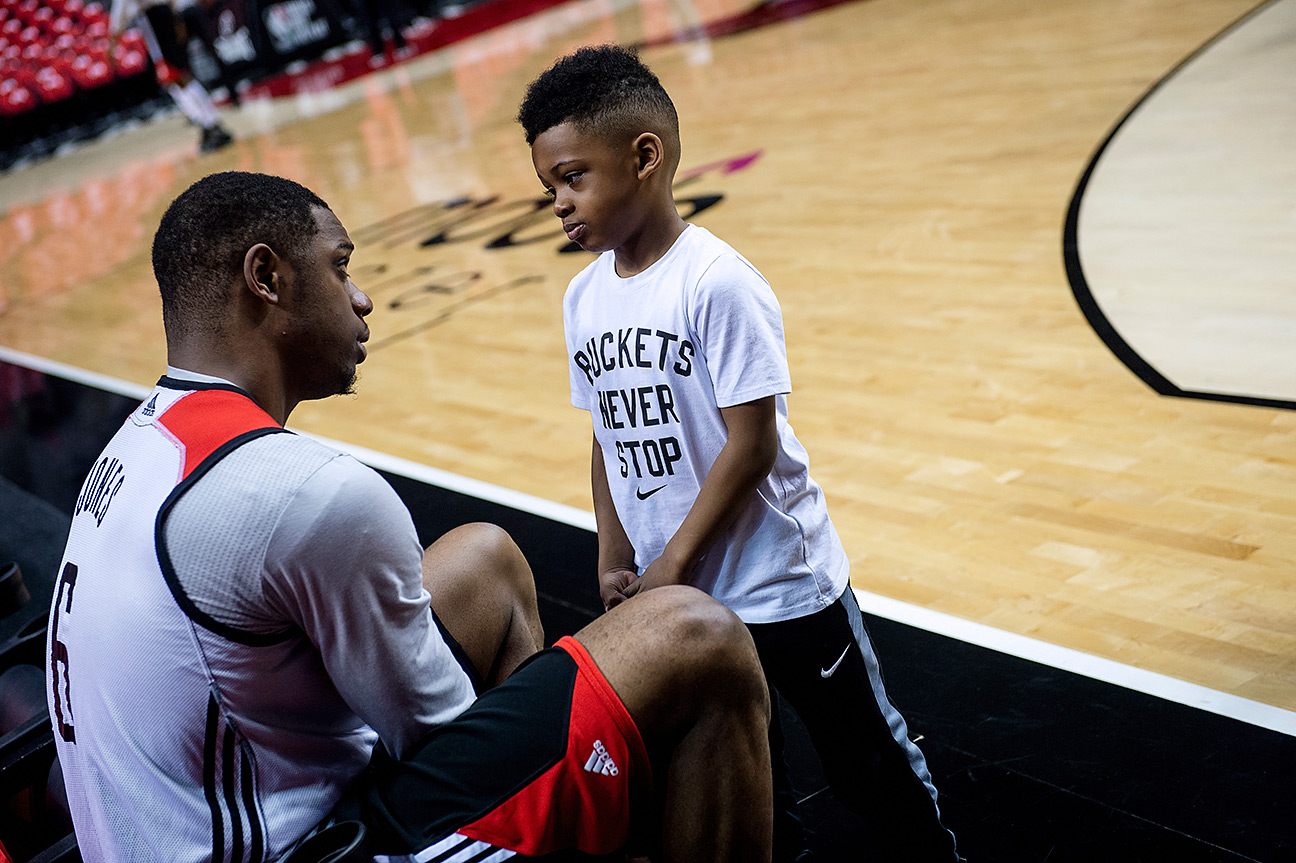 Rockets forward Terrence Jones is a Portland native, and his 5-year-old son Ajani was a permanent fixture around the hotel during the team's visit. Typically, having a young child running around a business hotel is fraught with all kinds of hazards -- to the child, hotel staff, team personnel and other guests alike -- but if ever there were an NBA hotel to unleash a kid in, it's the Monaco Portland. "[Ajani] can run around the hotel, and everyone's comfortable that the kid won't get into trouble or danger, because Joseph is on it," Keith Jones, the Rocket's longtime trainer says. 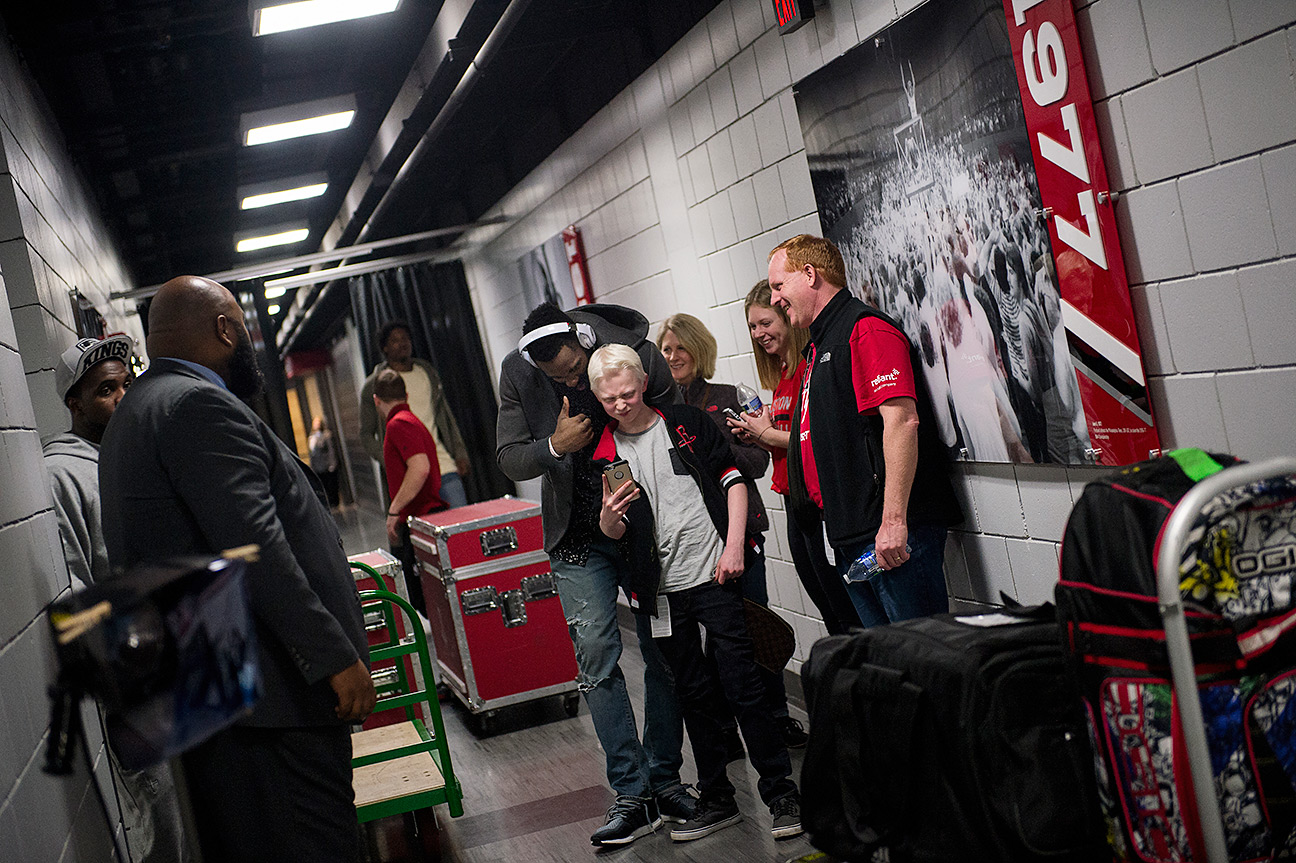 After a rough road trip and a win over the Trail Blazers snapped the home team's six-game winning streak, James Harden poses for a selfie with fan Sam Day outside the locker room before heading back to Hotel Monaco. 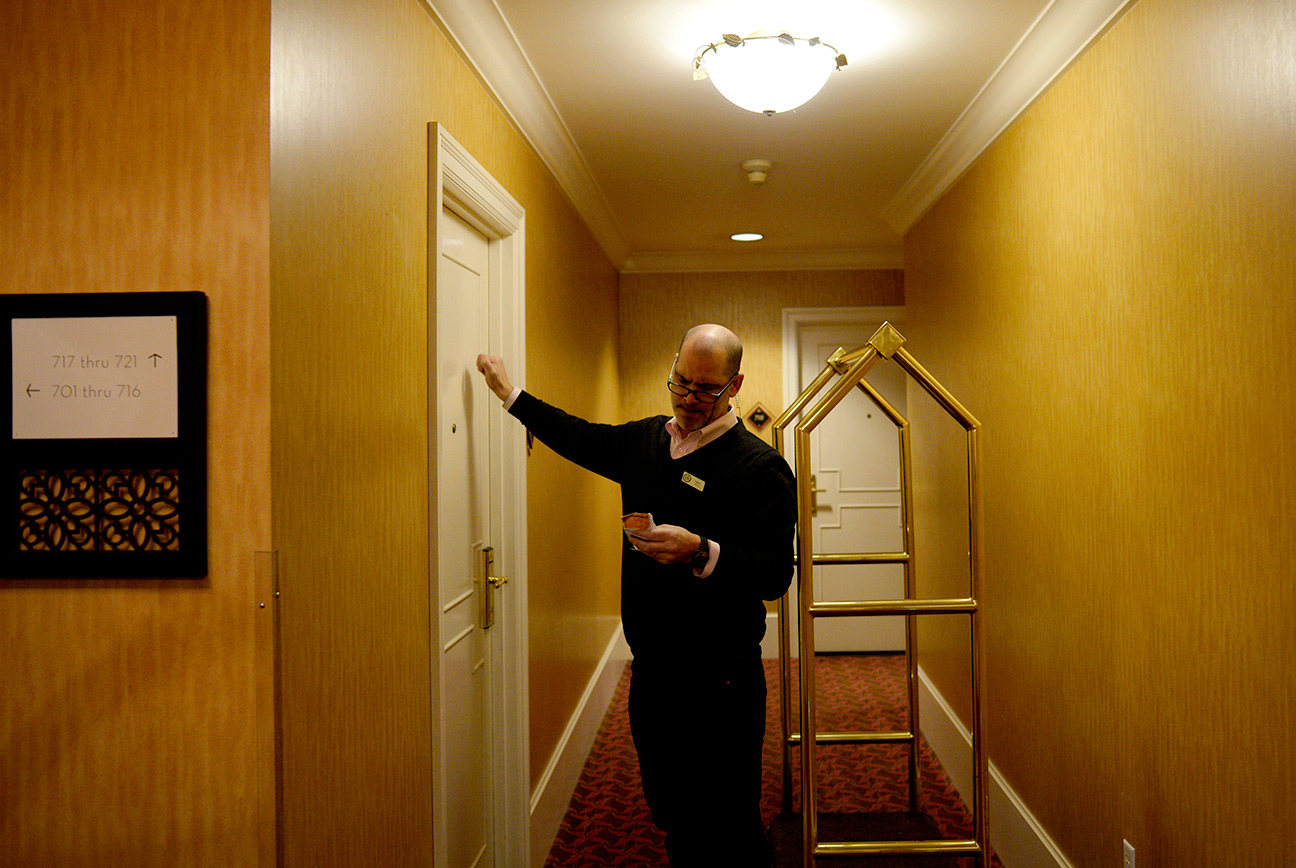 Getting every last bit of luggage from several dozen hotel rooms to the curb is the porter staff's equivalent of crunch time. It's a fire drill known across the NBA as "bag pull." For Houston, whose bus is scheduled to pull out of the hotel at 9 a.m., bag pull starts at 8 a.m.. The players get the luxury of packing last (the traveling party is as many as 40, with a coaching staff of eight, a training and equipment staff of about 10 for most games, as well as the local broadcast crew, the public relations staff, the team's director of security, and very often the general manager, owners or other team executives). Sundberg and his assistant porter carry a color-coded list to distinguish between the two groups. 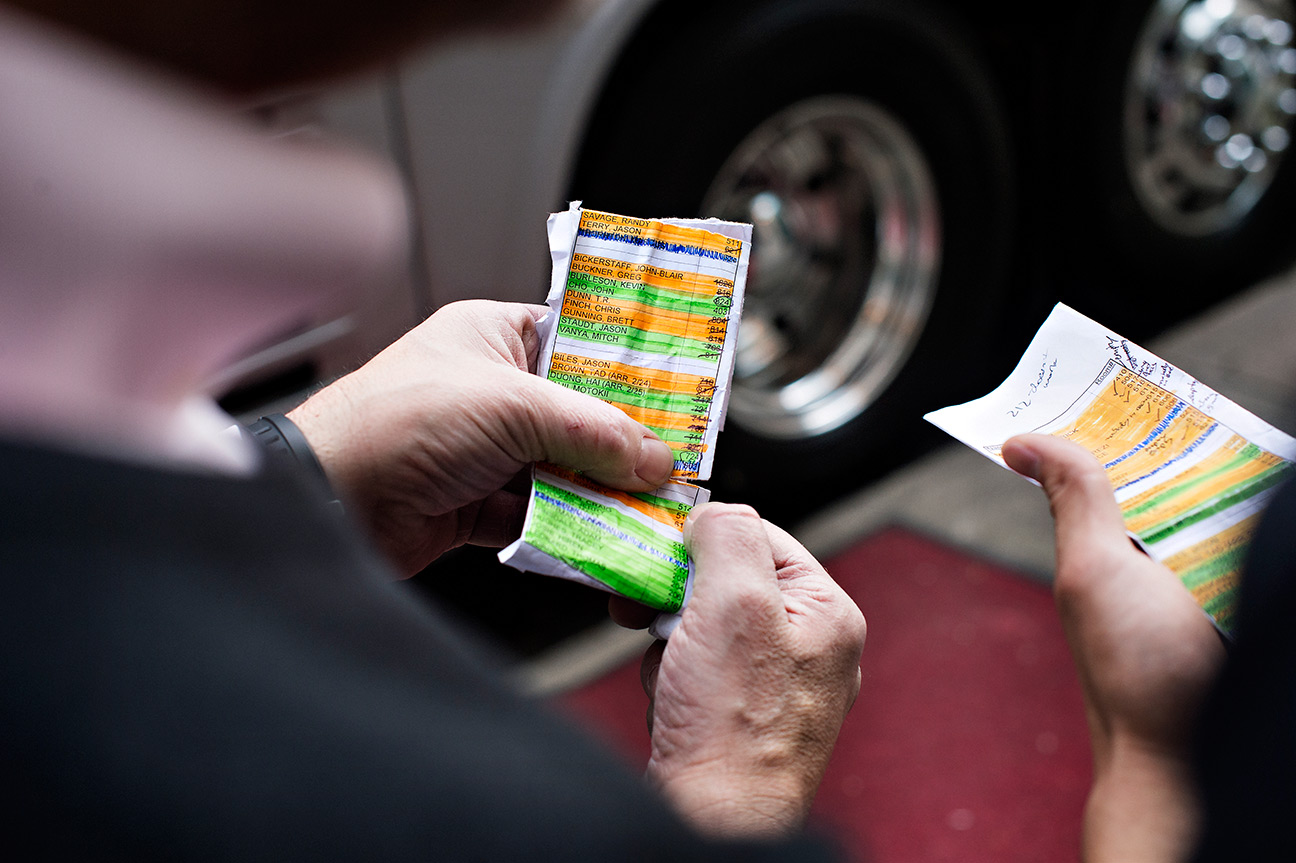 Here, Sundberg, left, and Damien Teramae-Kaehuaea compare their color-coded lists that distinguish between the two groups. Sundberg takes the top floor and works down, while the assistant porter starts on the bottommost floor and works out. 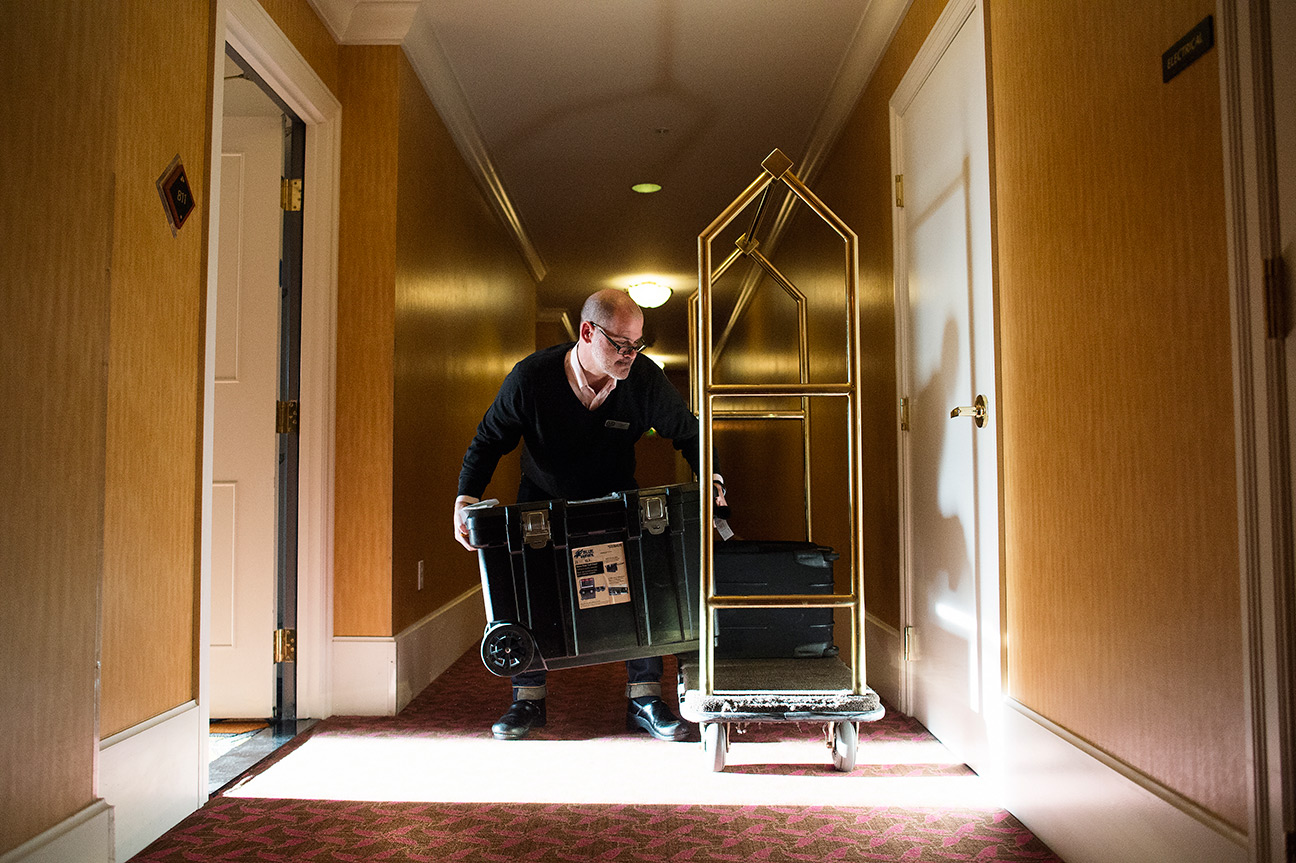 Players can be pokey, and it's not unusual for Joseph to be greeted by a naked 7-footer. A knock on the door is followed by a loud "bag pull!" The process takes about an hour, and it can slow considerably if players send the porter away for a few minutes and there's some necessary backtracking. 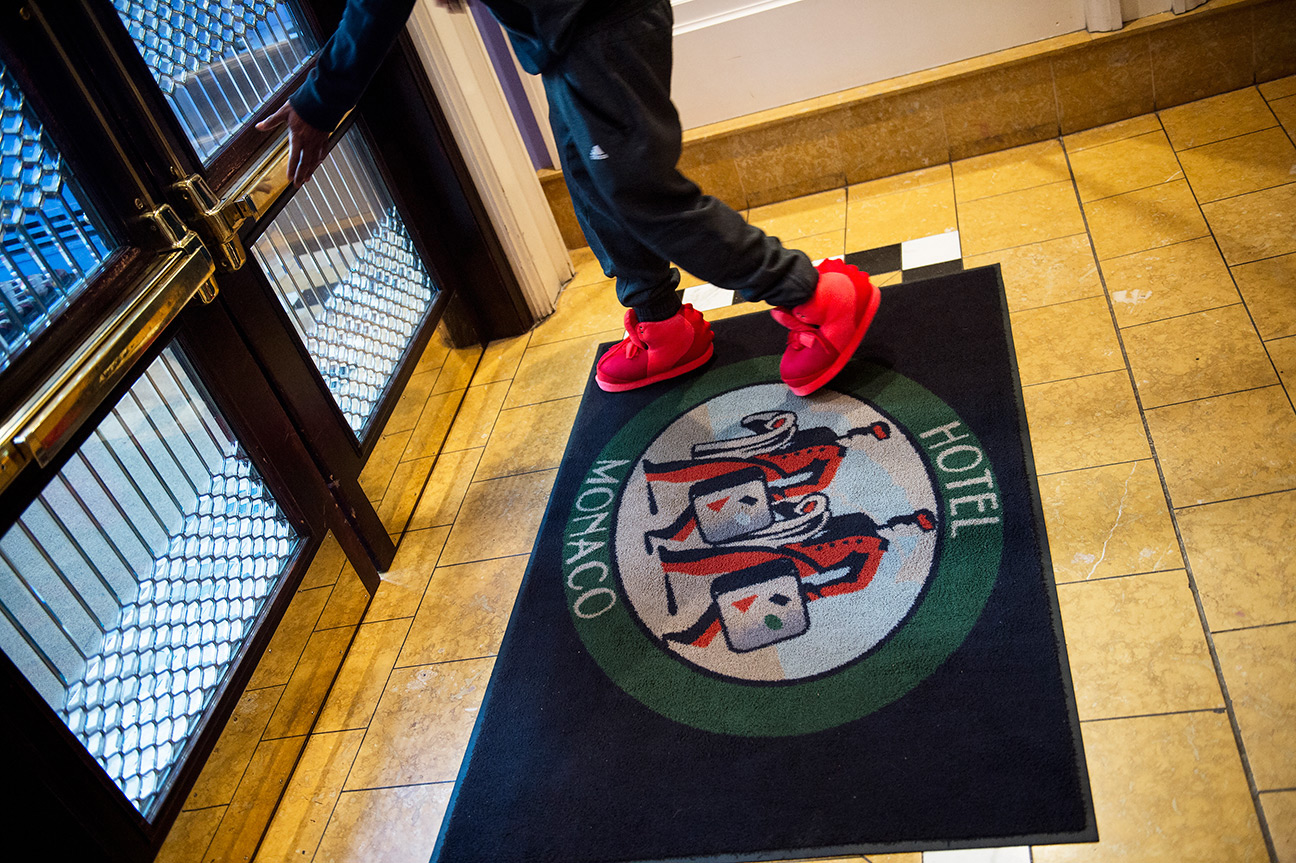 For the Rockets, it's been a smooth stay at Hotel Monaco Portland. Jason Terry's video-game system found its way to his room promptly. The broken handle on assistant coach T.R. Dunn's bag was repaired in short order, thanks to Sundberg's logistical magic trick. Most of all, there were no surprises. 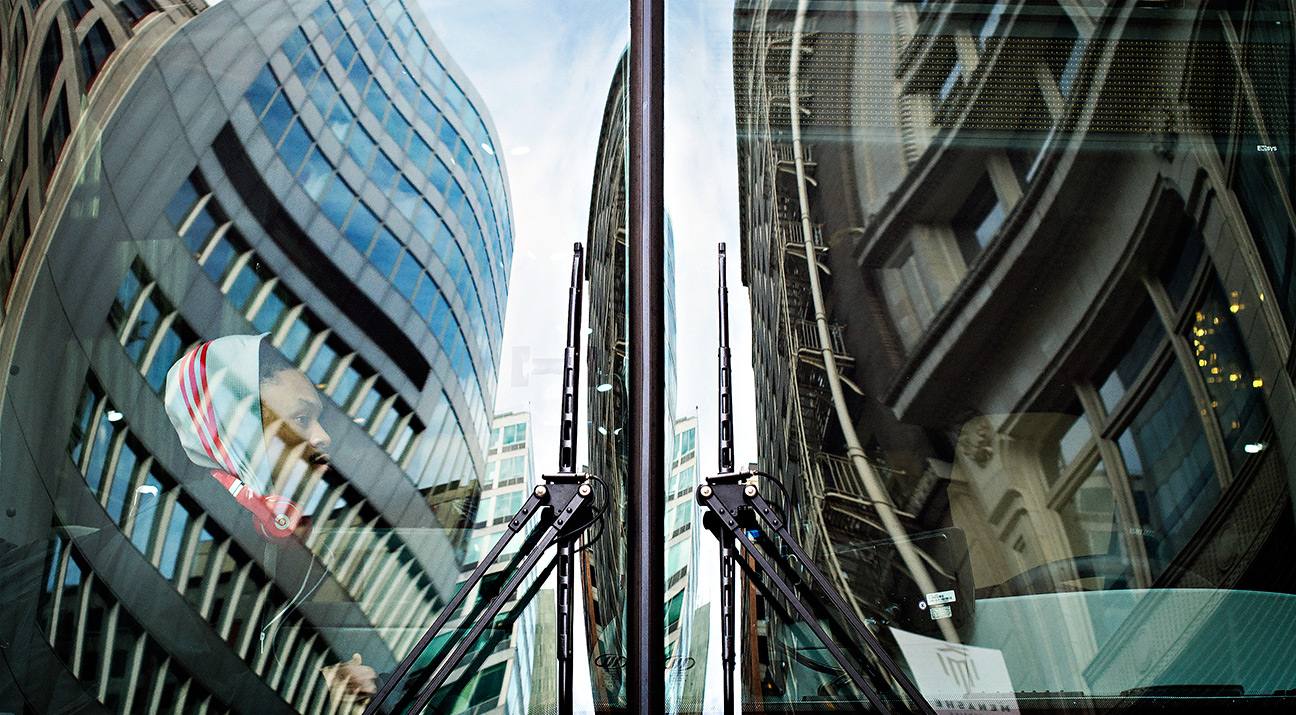