breeze glides through the air as the sun dips below the tree line. The air is cooler than expected in Santa Monica on a May evening, but it's perfect weather for baseball.

Jake Hofheimer, 17, cheers from the dugout as the ball jumps off a teammate's bat. His mop of dark, curly hair peeks from underneath his still-crisp hat as a sideways smile crosses his face. This is Hofheimer's first season with the New Roads School baseball team. He doesn't play as much as he would like, but that doesn't bother him because on the team, he feels like one of the guys, not Jake Hofheimer, transgender baseball player.

Hofheimer came out to his parents, Josh and Lisa, as transgender at the end of eighth grade. Although 2013 was only three years ago, it was a different landscape for transgender visibility. Laverne Cox made her debut as Sophia in "Orange is the New Black" that summer, no one knew the name Caitlyn Jenner, and Janet Mock did not have her own show. With Jake's acknowledgment of his identity, the Hofheimers together began a journey of compassion and love to figure out how to best move forward as a family.

Originally enrolled in an all-girls school at the beginning of ninth grade, Hofheimer was tormented by his peers for being different. He was not out but was still marked as different, which morphed into daily teasing and taunting.

Transferring to New Roads was a welcomed reprieve. The school has been a haven for Hofheimer, who is not the only transgender student in attendance. There are gender-inclusive restrooms on campus, and students are viewed as multifaceted individuals rather than through the lens of their identities by faculty and administrators.

Hofheimer loves baseball as well as other sports, but most of all, he's really just a teenager trying to figure it all out. 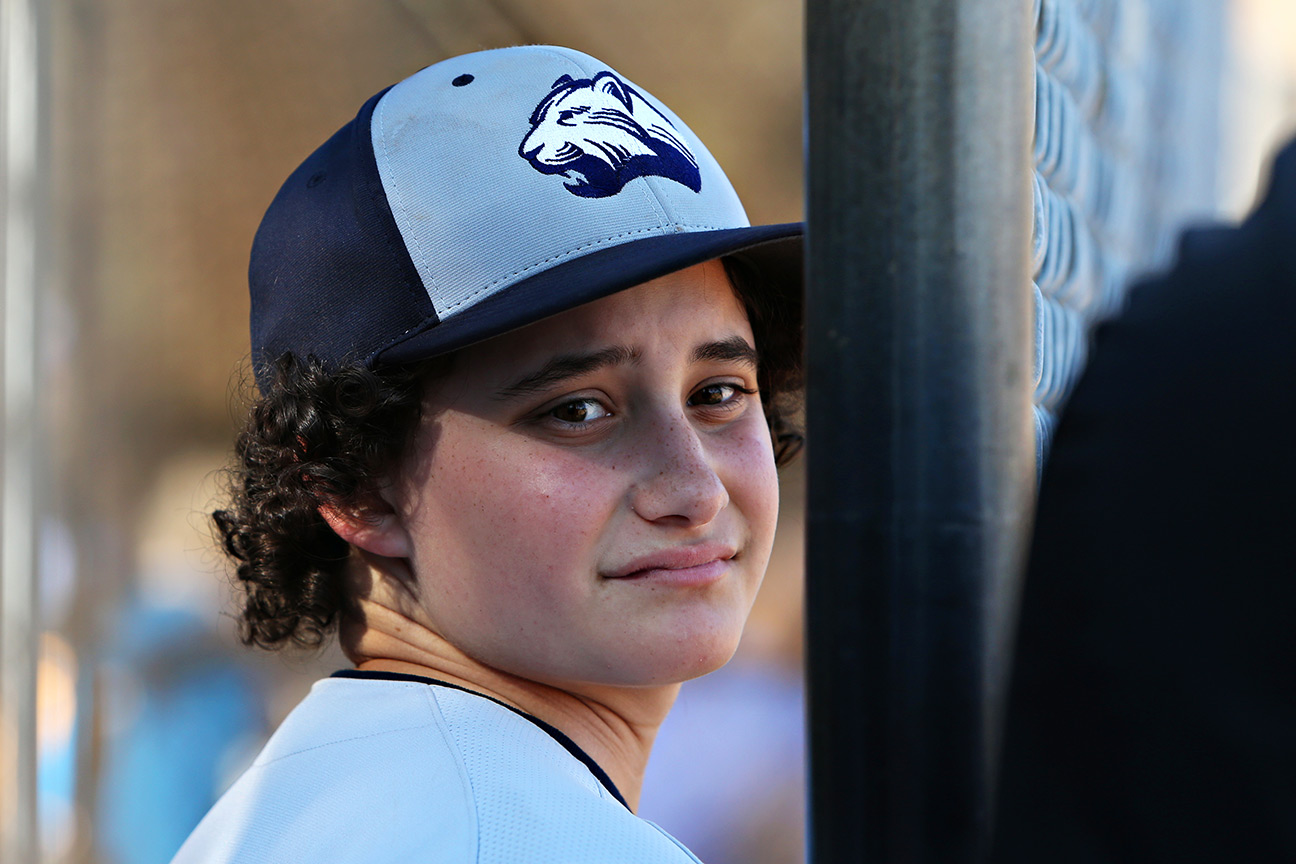 "I never really felt like I fit into the box of female," Hofheimer says. "Even as a little kid, my favorite thing to wear was basketball shorts and a T-shirt. I didn't know how to express it, but I felt like a guy trapped in a girl's body, and that really started to surface more when I started to go through puberty. I realized that I was in the mindset of asking why I wasn't going through what other guys were going through." 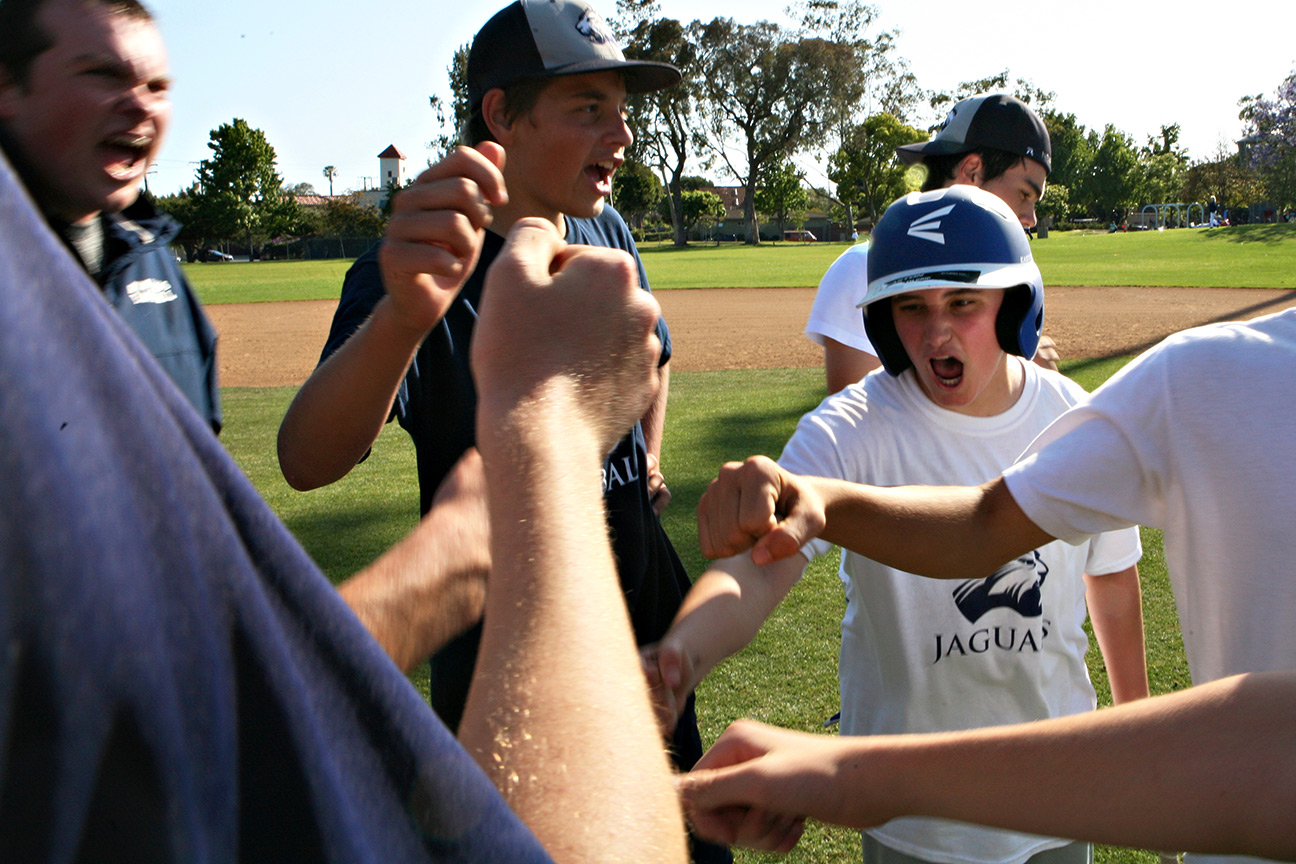 Hofheimer plays second base and outfield. He prepares for the game and huddles with his teammates. "They don't treat me any differently than the other guys on the team," he says. "They still give me just as much s--- as they do everyone else." 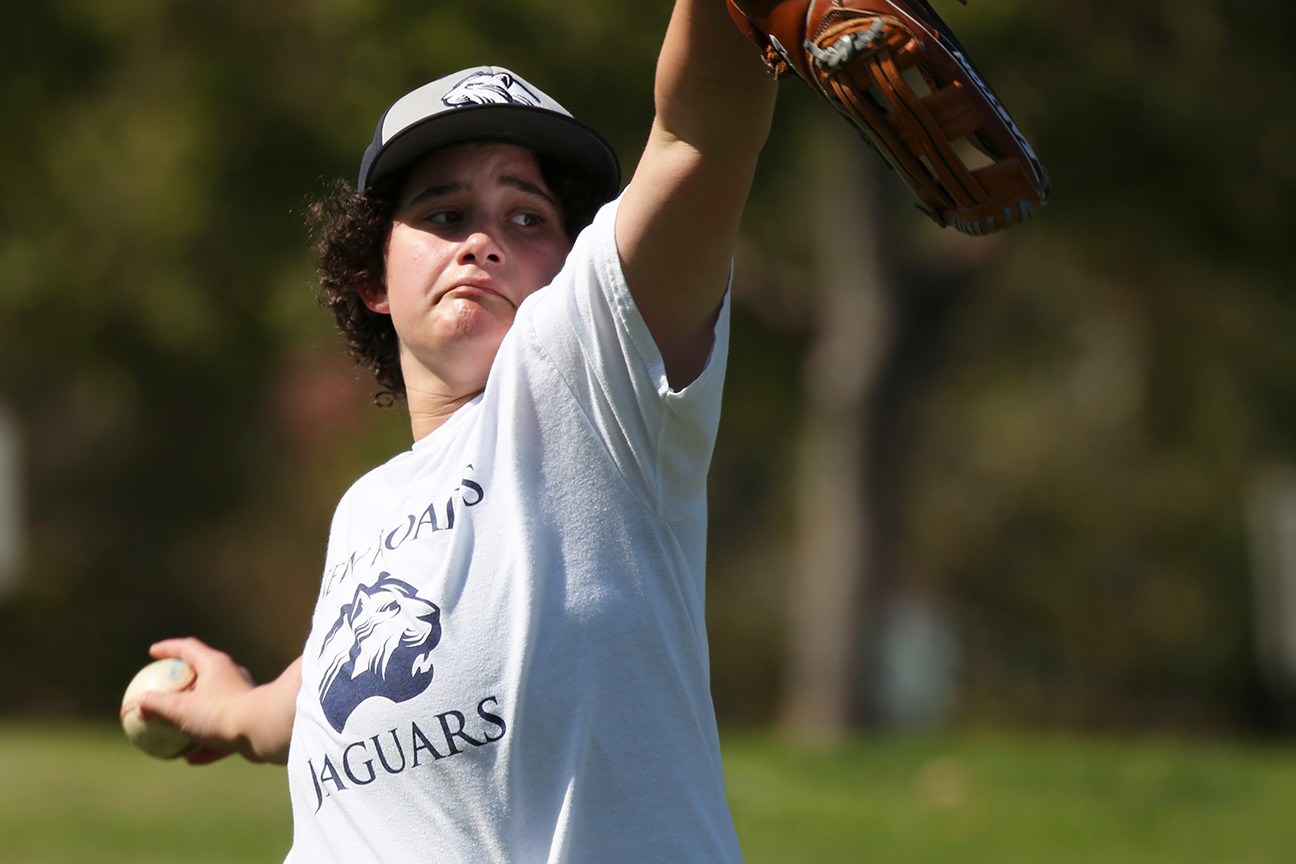 "The guys on the team have been really understanding," Hofheimer says. "They know that because I'm not taking hormones, I'm not as strong and can't throw as hard. When I play outfield, the cutoff guy will move forward, and when I play second, the catcher takes a couple steps up. It all works itself out." 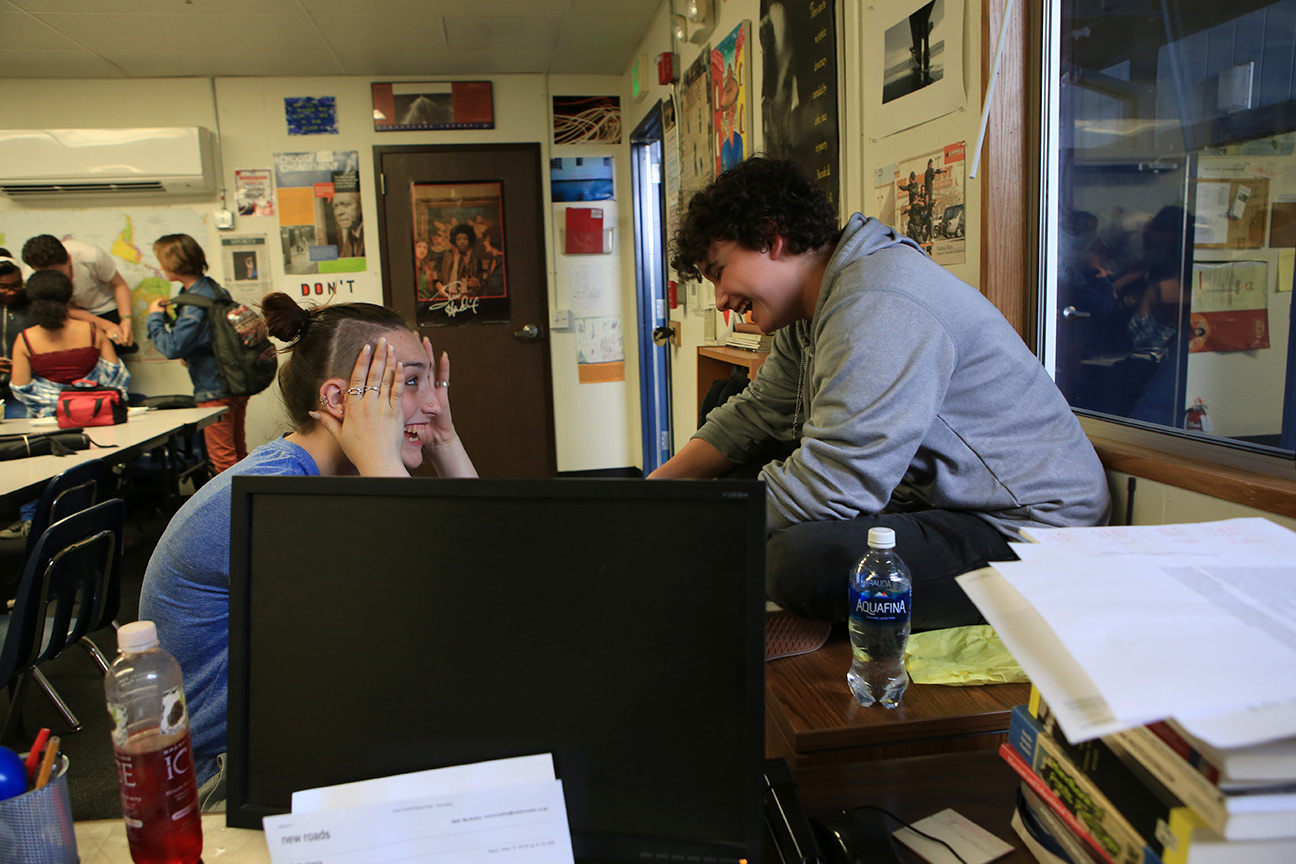 Hofheimer spends lunch with his friend, Aliya Biren, at a swim club meeting. He swam for years before deciding to stop because of his feelings of dysphoria, or discomfort with his body. He hopes to get back in the pool after what is referred to as top surgery, the removal of his breasts, which he says is "the biggest thing on my mind right now, more than hormones." 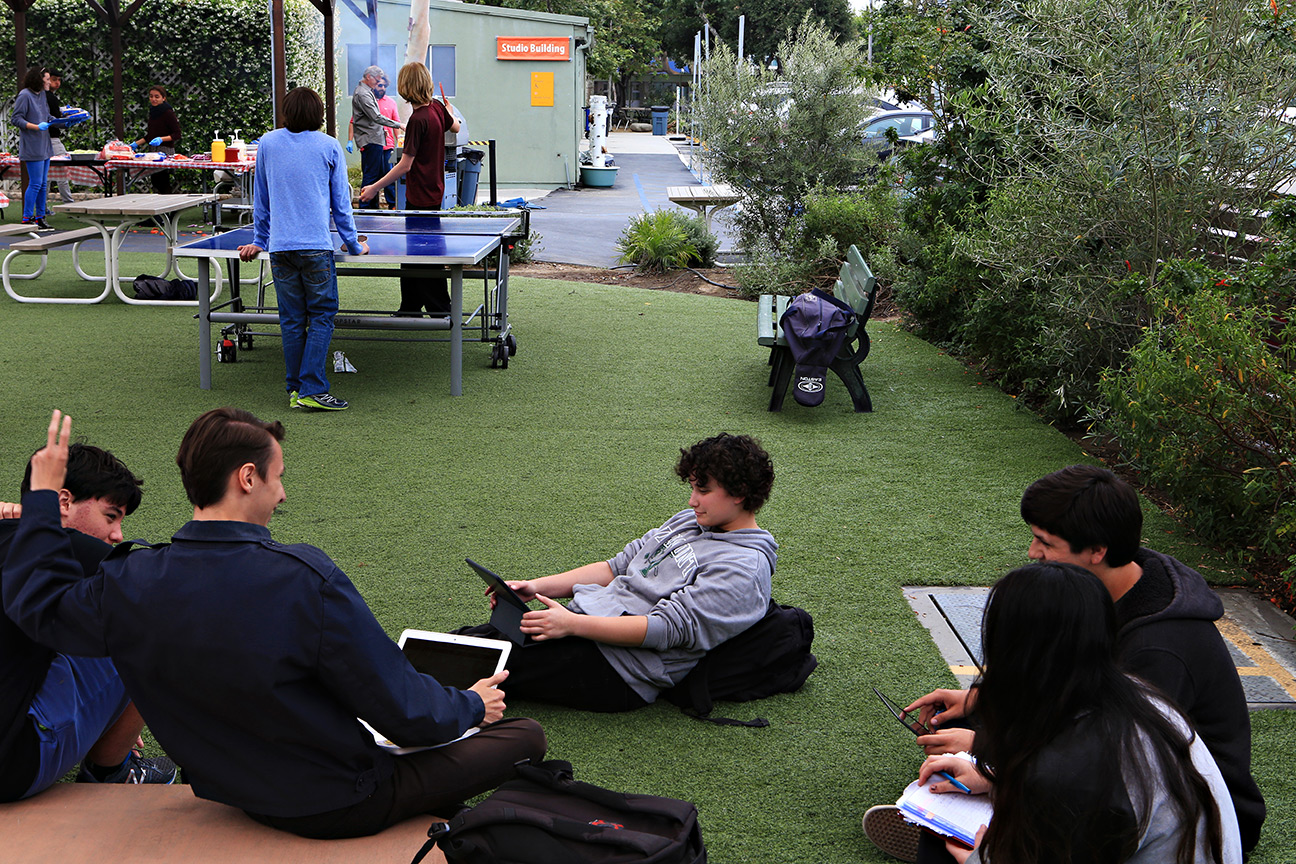 "I've felt like I can be myself and not have to worry about what other people think of me, which has been a great change," Hofheimer says. "At my old school, I was constantly looking over my shoulder wondering what people thought of me, and then I came to New Roads. It literally says on the sign, 'At New Roads, anybody can be anybody.'" 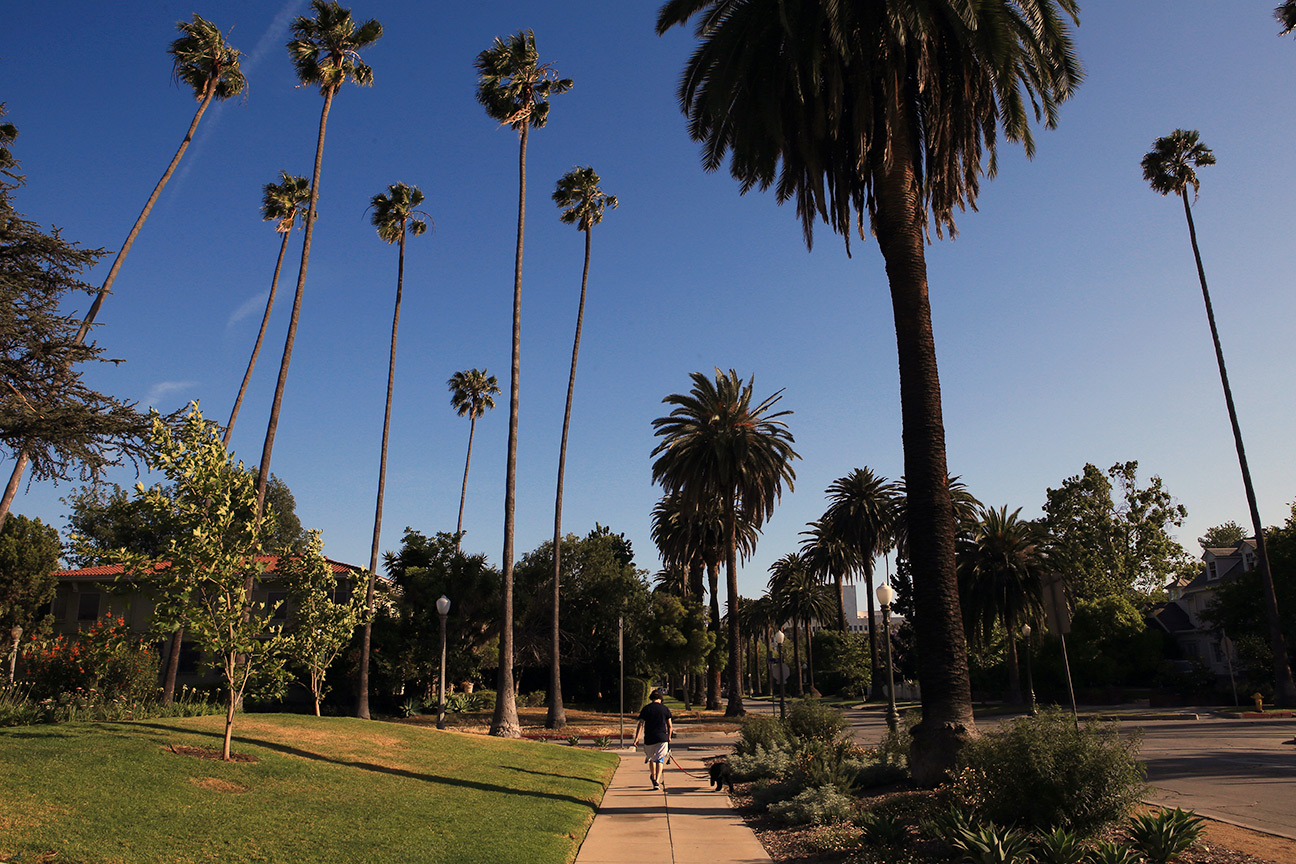 Hofheimer walks his dog, Ozzie, down the street in his neighborhood. As a junior, he's started to look at colleges. His first choice is the University of Vermont, where he can ski, snowboard and maybe play club hockey. He also looked at Virginia Commonwealth University, but Virginia is one of many states lacking trans-inclusive policies. "I do feel like in today's world, there aren't many places in this country where he can live, work, coexist safely where there are protections against discrimination and other forms of abuse," Jake's father, Josh Hofheimer, says. "There are really only a limited number of states in this country that have proactive and progressive laws on their books." 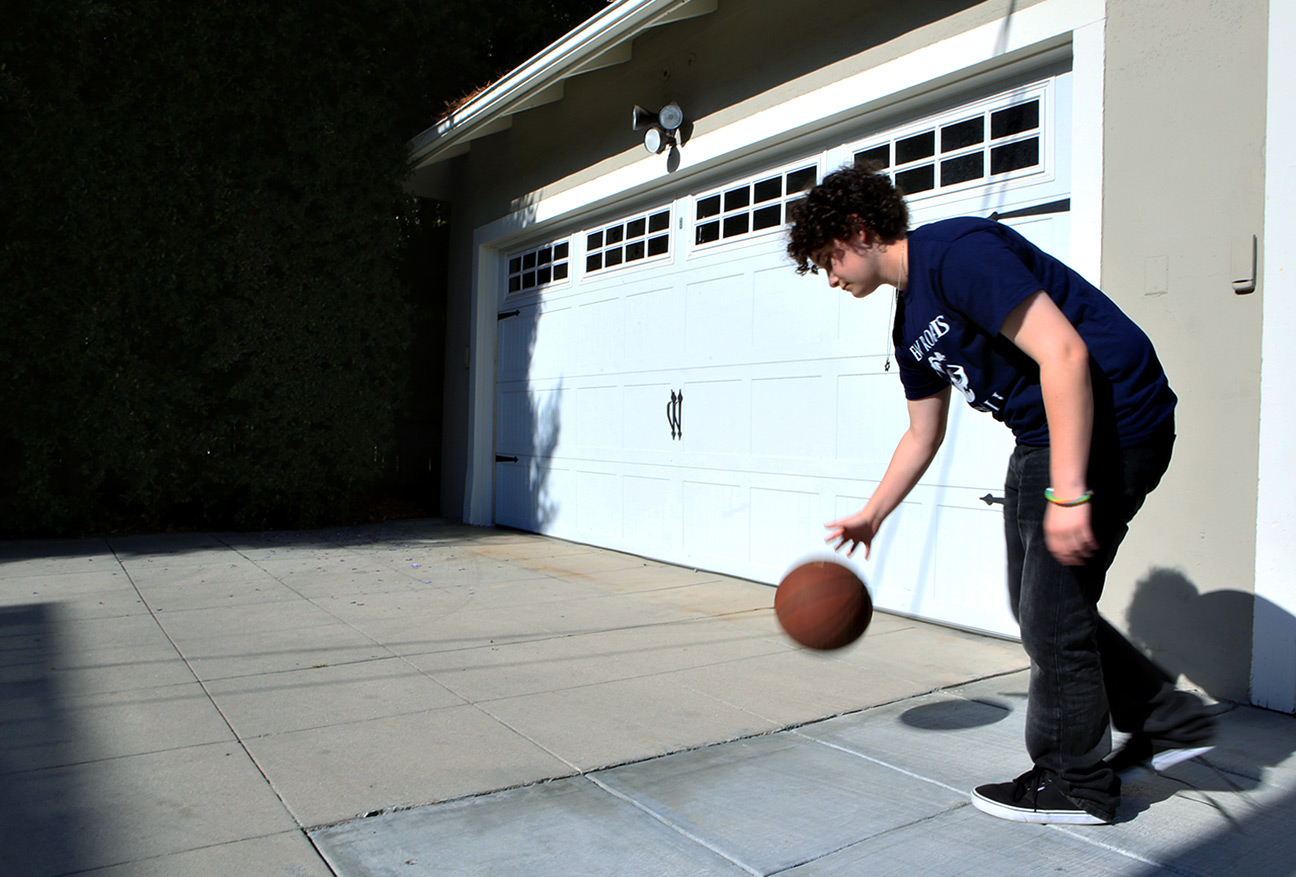 Hofheimer grew up playing all kinds of sports, many of them in the driveway and backyard of his home. His primary sports, though, continue to be snowboarding and skiing. Swimming used to be in that category. 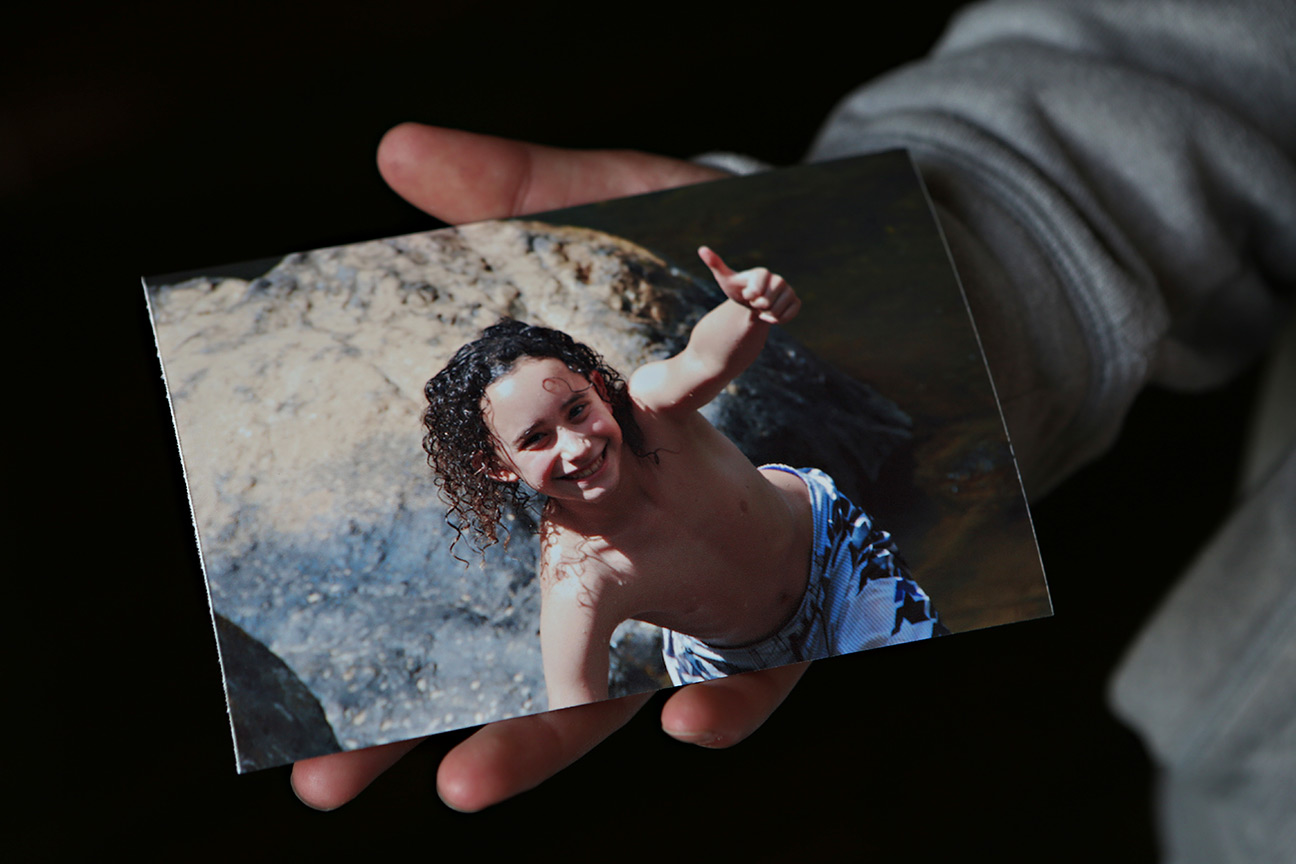 "I would go swimming shirtless until I was like 11. ... When you're at that age, before you start going through puberty and stuff, you're just a kid, you're not really thinking about gender at all," Hofheimer says while holding a photo of himself at 10 years old playing in the water in Australia, where he lived for two years. "The longest my hair ever was, was down to my shoulders and it's really curly, so I just looked like a surfer. The majority of the time when my brother and I would go somewhere with my parents, people would say, 'Oh, you have such cute little boys.'" 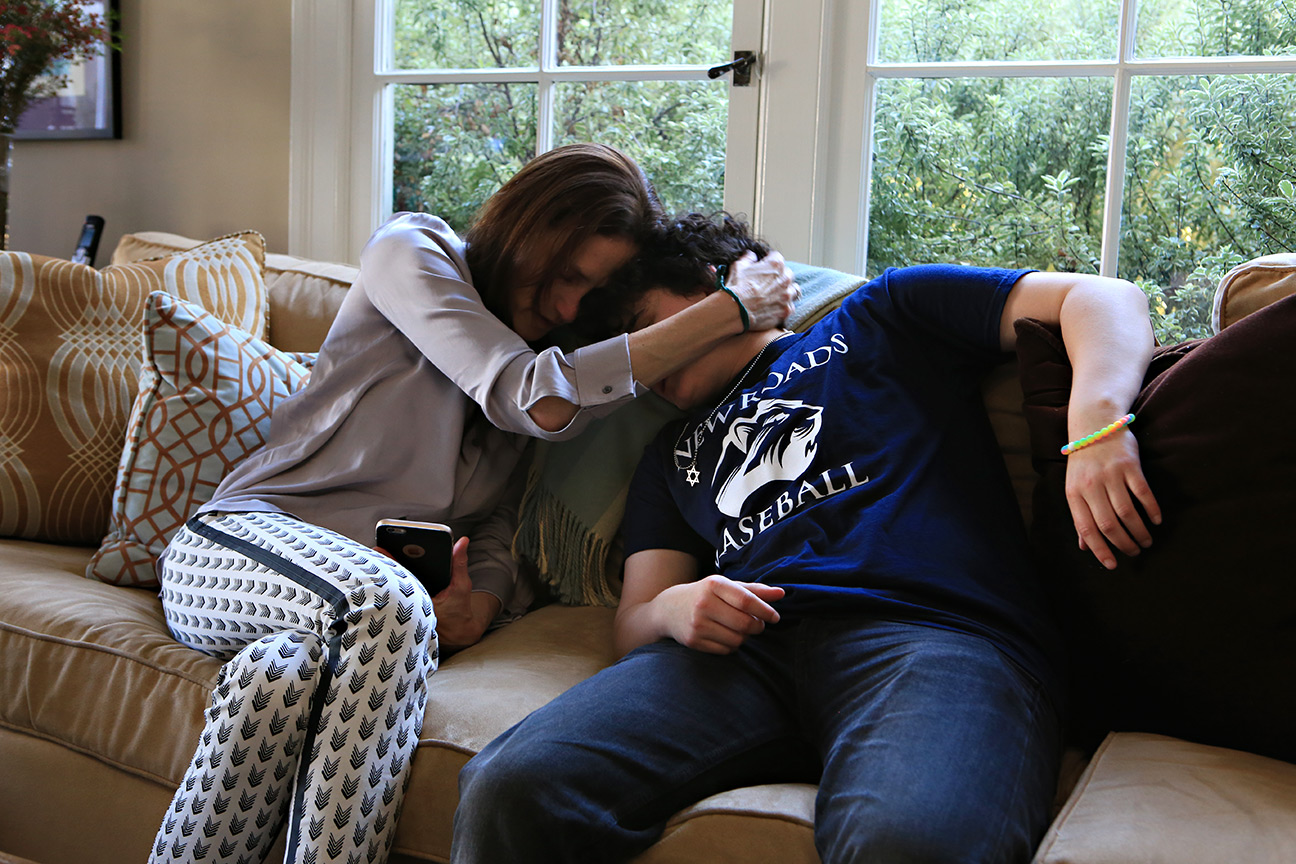 Hofheimer shares a moment with his mother, Lisa. He came out to her at 14. "As a parent, not being able to reassure your child about what's going to happen and not being able to provide concrete steps of the journey is a challenge," she says. 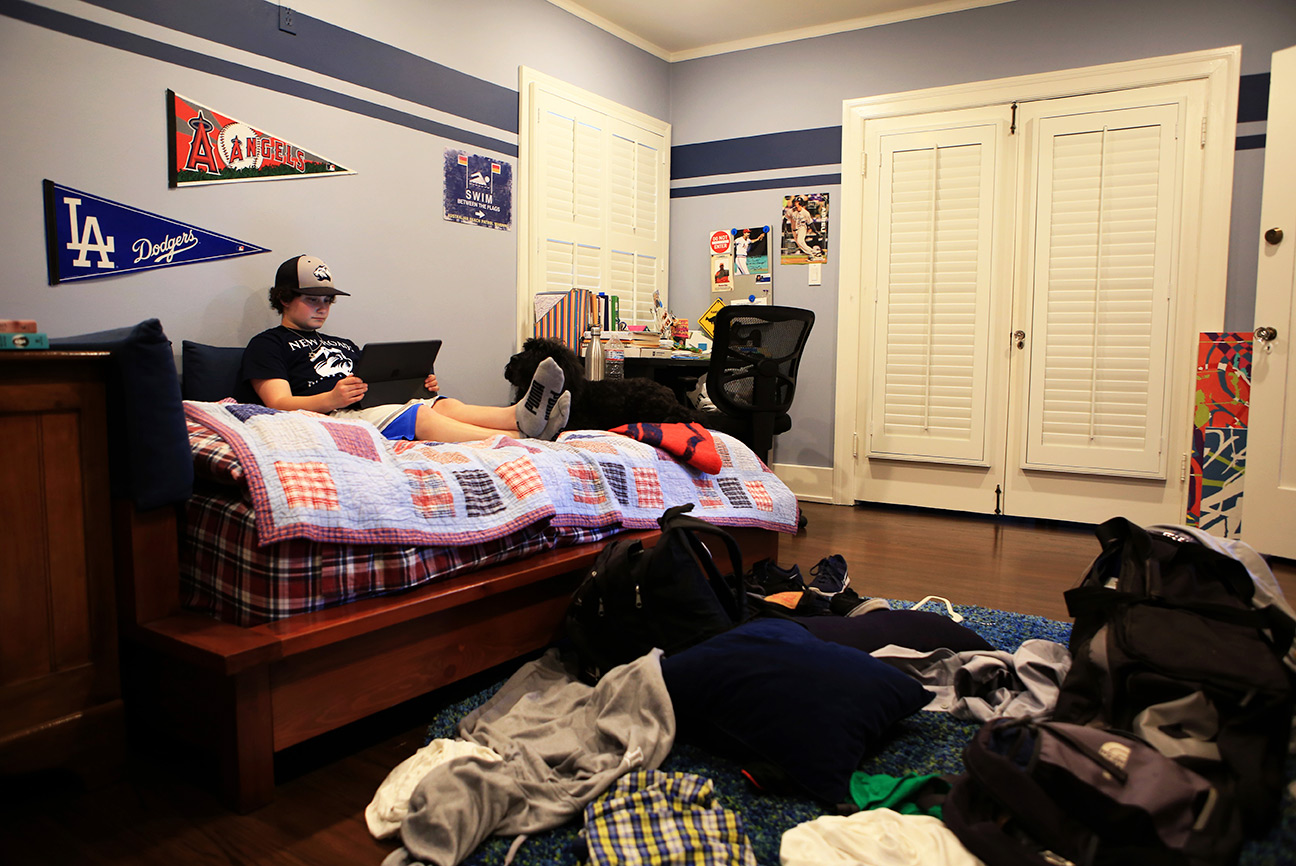 Hofheimer relaxes in his room, doing his homework after a day of school and practice. He sits underneath the pennants of his new sport, baseball, while a pool sign hangs on the wall seemingly just out of reach. "For me, the tragedy is that Jake no longer swims," Lisa Hofheimer says. 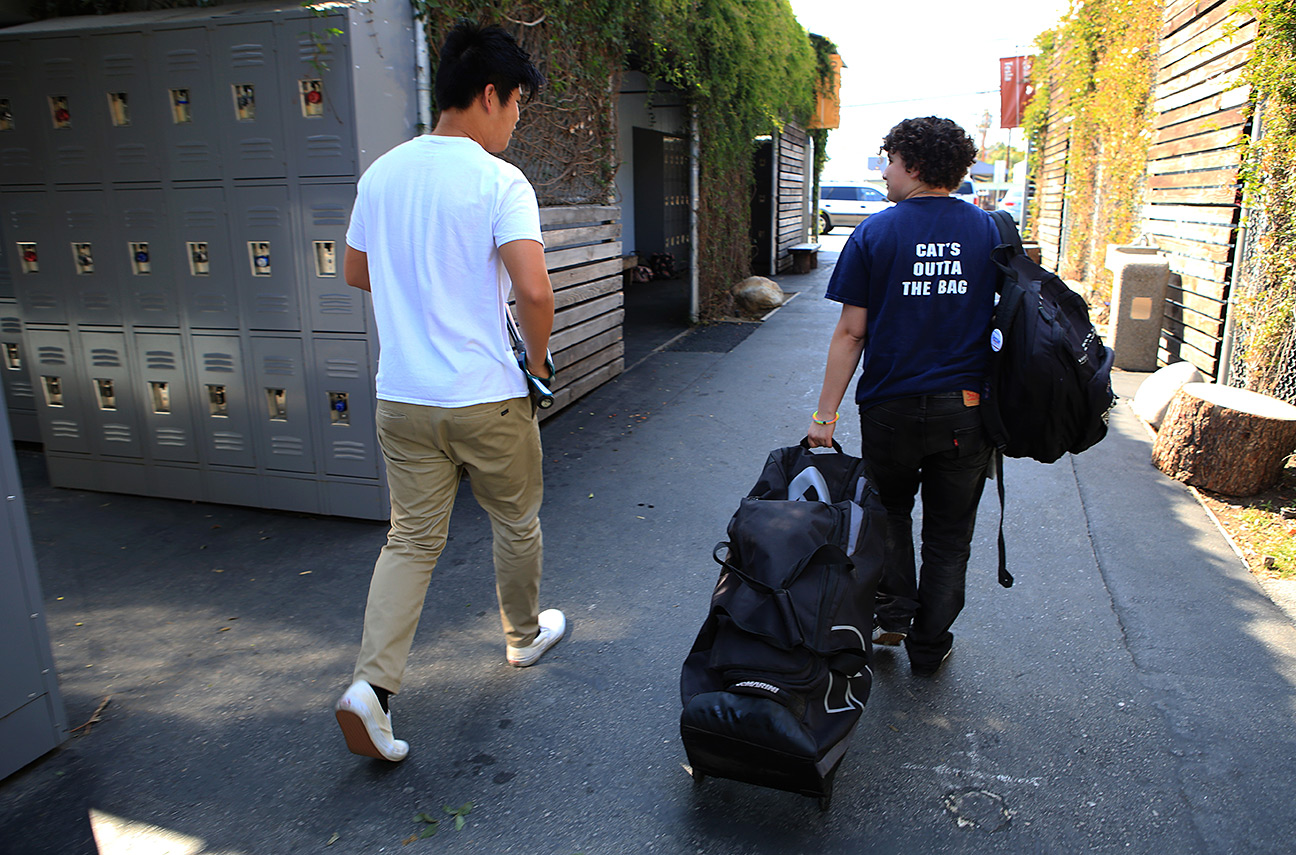 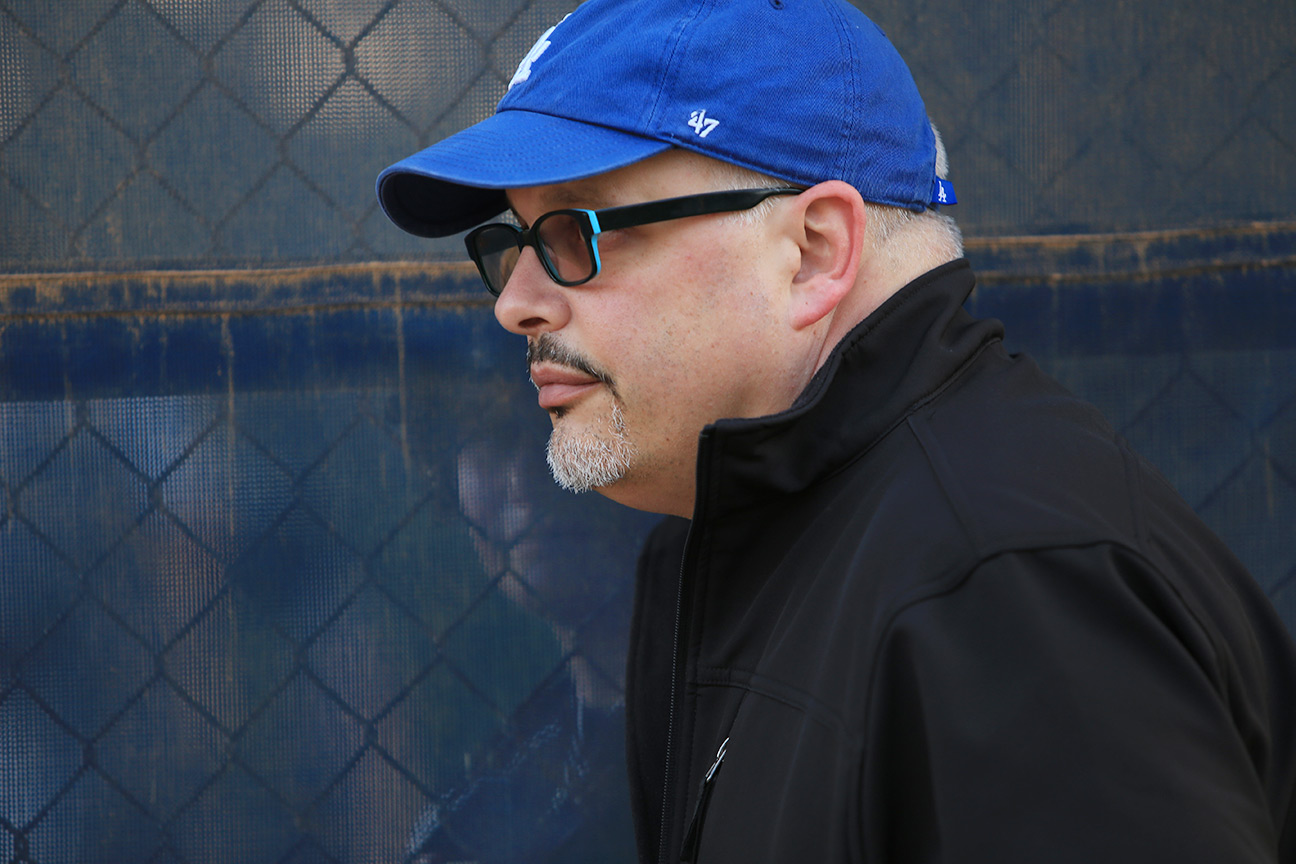 Josh talks to his son through the dugout screen. He accepts Jake and wants nothing more than for him to be happy, but he took a journey of his own coming to terms with Jake's identity. "It was hard for me to use Jake's name. I felt like Jake took away Emma. I didn't like Jake. We used to call him Em, so I wanted to call him MJ, but it wasn't working." 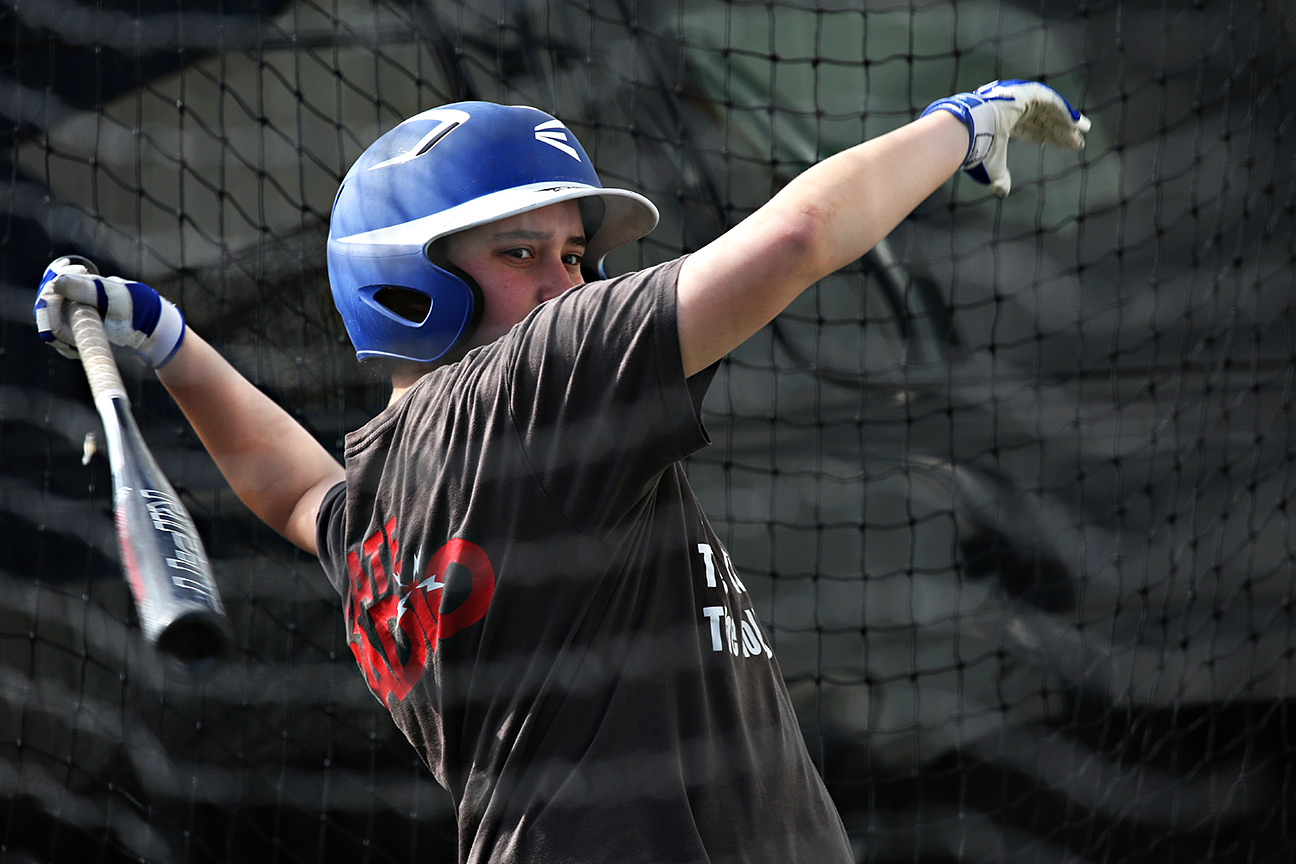 Hofheimer takes his turn in the batting cage at practice after school. "I think it's important to show the sports world that not all trans people are bad athletes -- that there are trans people who enjoy sports and are treated as their gender identity and not as anything else." 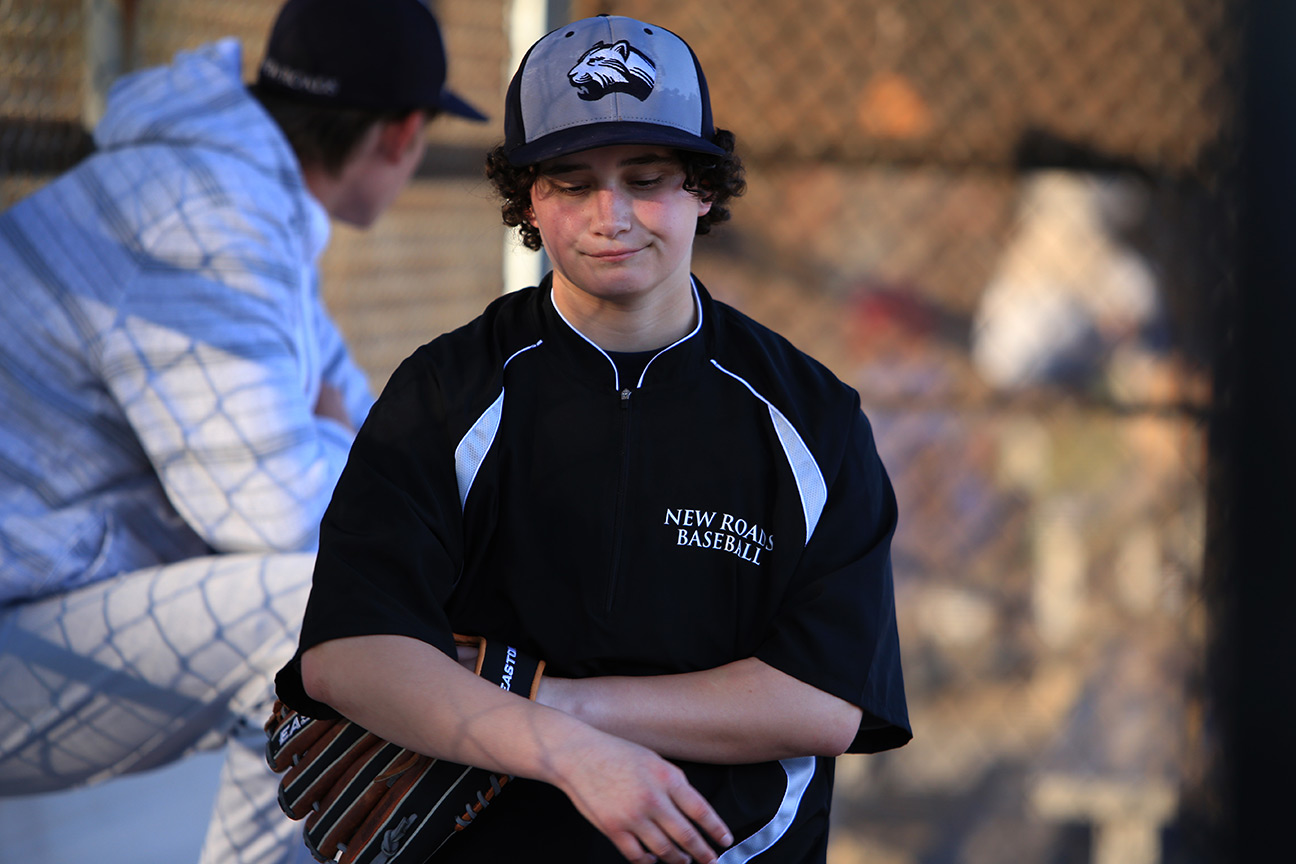 "Even on the baseball field, when I'm playing, I'm constantly messing with my shirt. I have a lot of dysphoria around my chest, even though everyone on the team tells me it doesn't look like I have a chest, and that I just look muscular," Hofheimer says. "That's what they say." 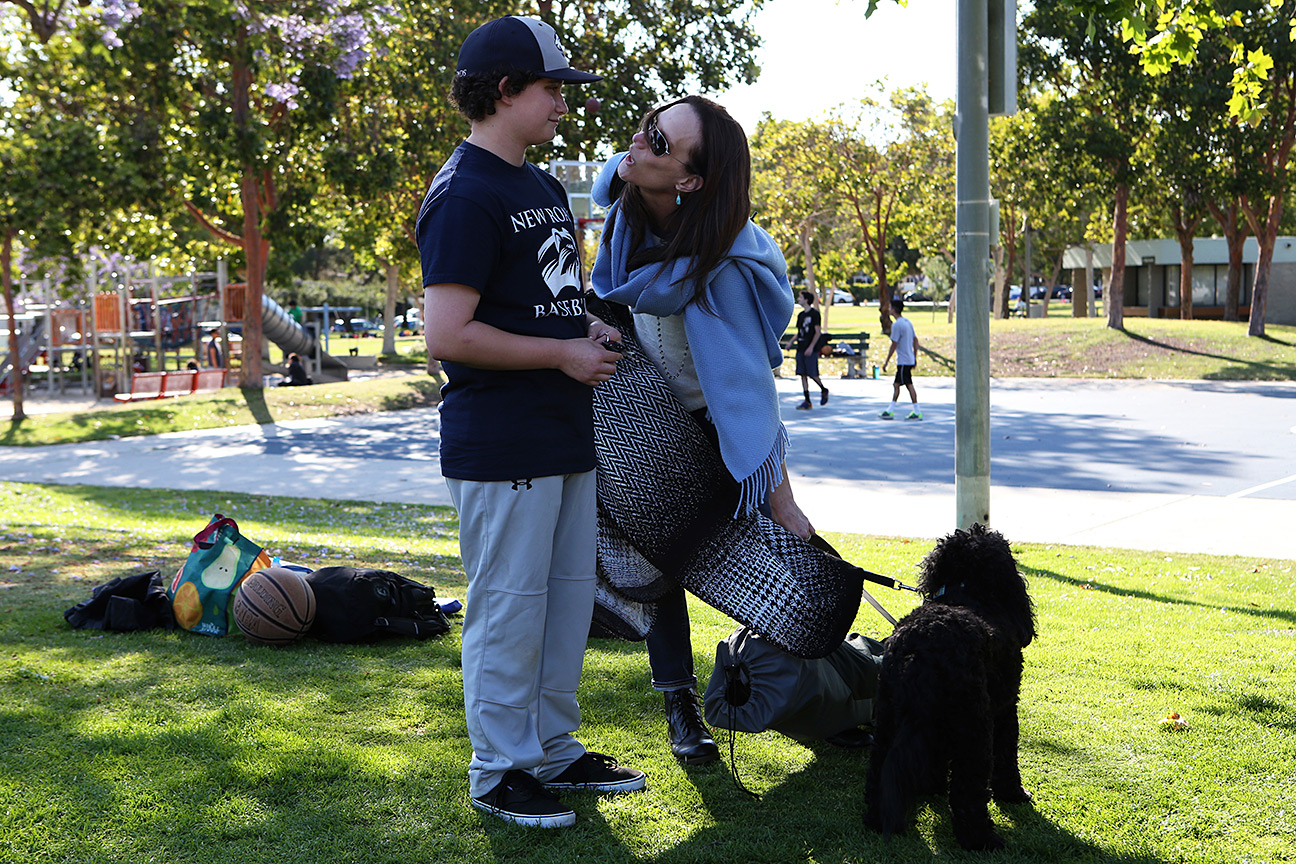 "Josh and I approach things with the same attitude in terms of openness, but we each have our own ideas," Lisa Hofheimer says, "It can be complicated as parents going through this journey. If one of us is stuck, it requires the other one bringing them along. It can feel even more difficult if Jake and I are on the same page and I need to bring [Josh] along or vice versa." 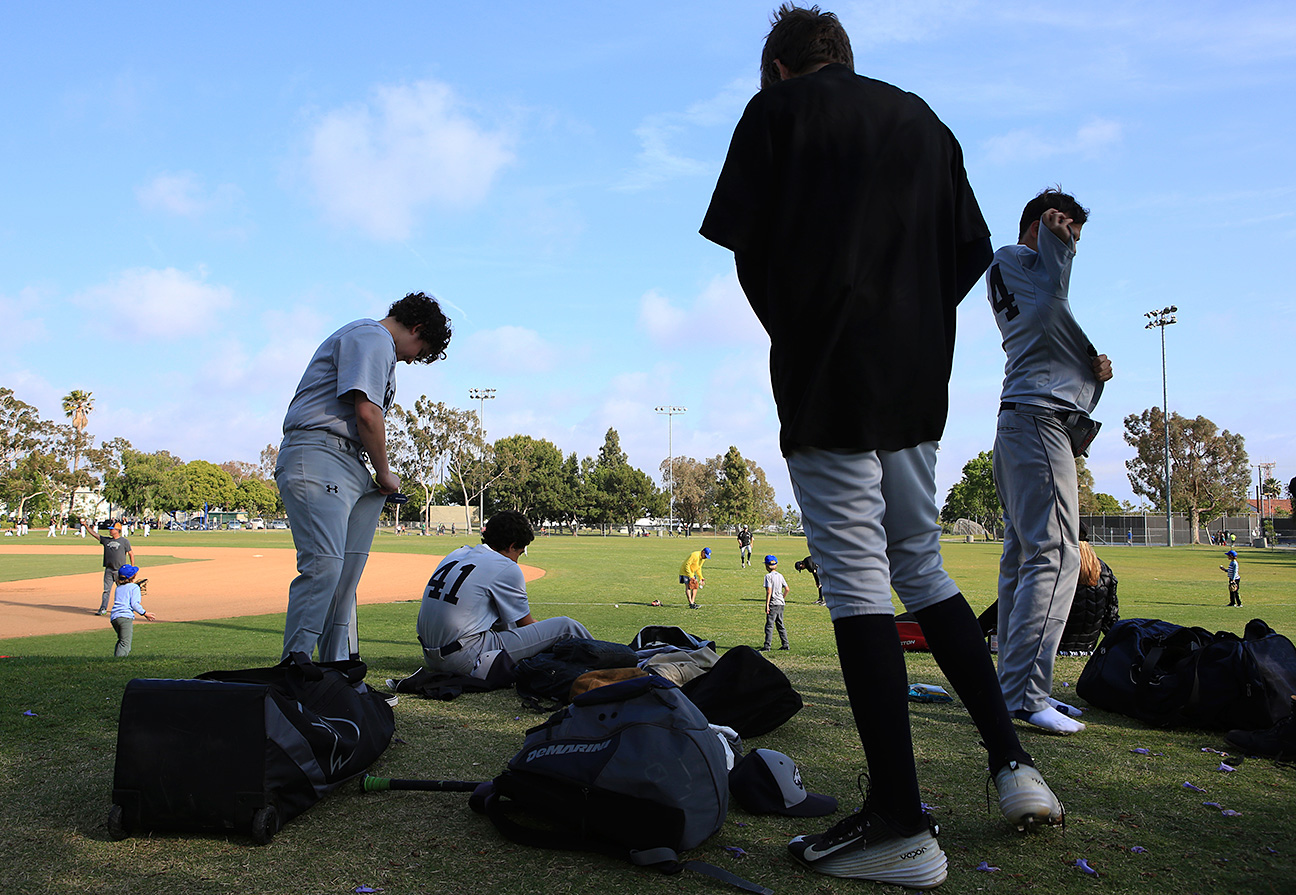 As Hofheimer prepares for games, he has more considerations than other guys. He wears a binder in the form of a special tank top to flatten his chest. "Wearing a binder all day, every day is a pain in the ass. Even though it's just one layer, it's an extra layer I have to be wearing, which can be frustrating, to say the least." 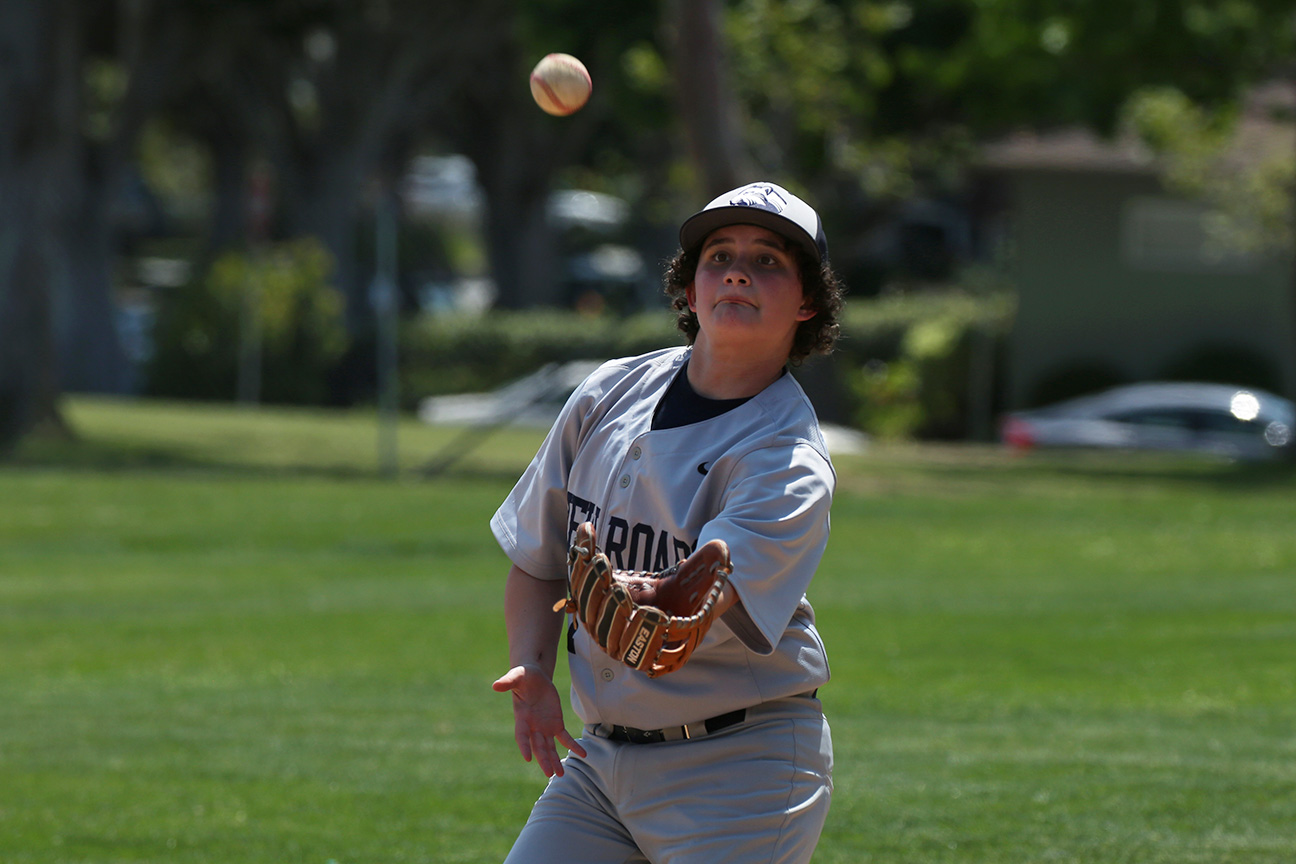 "What I like is that people haven't been treating me any differently," Hofheimer says of the increasing attention on his trans identity. "They're still just treating me like me, which I'm happy about because I don't want people to give me special treatment. I want people to be aware that there are people who are different in this world and this country, and I want them to be accepting." 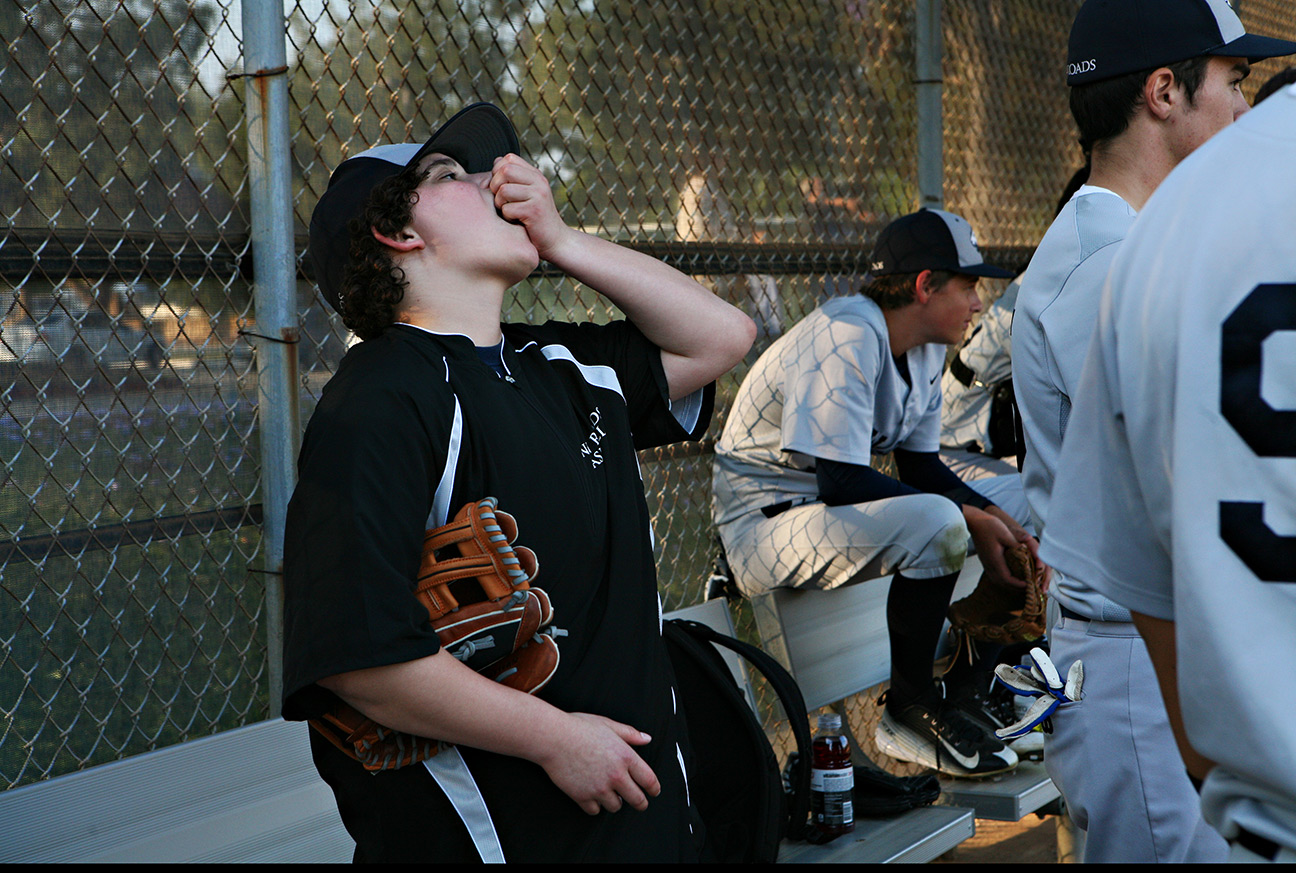 Although Hofheimer does not see the field often, the community around him has been supportive while simultaneously being challenged, including his parents, who attend nearly every game. "I know that this is our reality," Josh Hofheimer says. "And I also know that reality is complex and nuanced. There are a lot of factors involved here, and I really struggle sometimes. Sometimes I want to make decisions and just do things because I know he wants it. We've been incremental in our approach to medicines, name changes, gender changes and surgeries. I know that he would like to move at a different pace, but we all have to get there together, and I have to feel like he is the one making the decisions, truly." 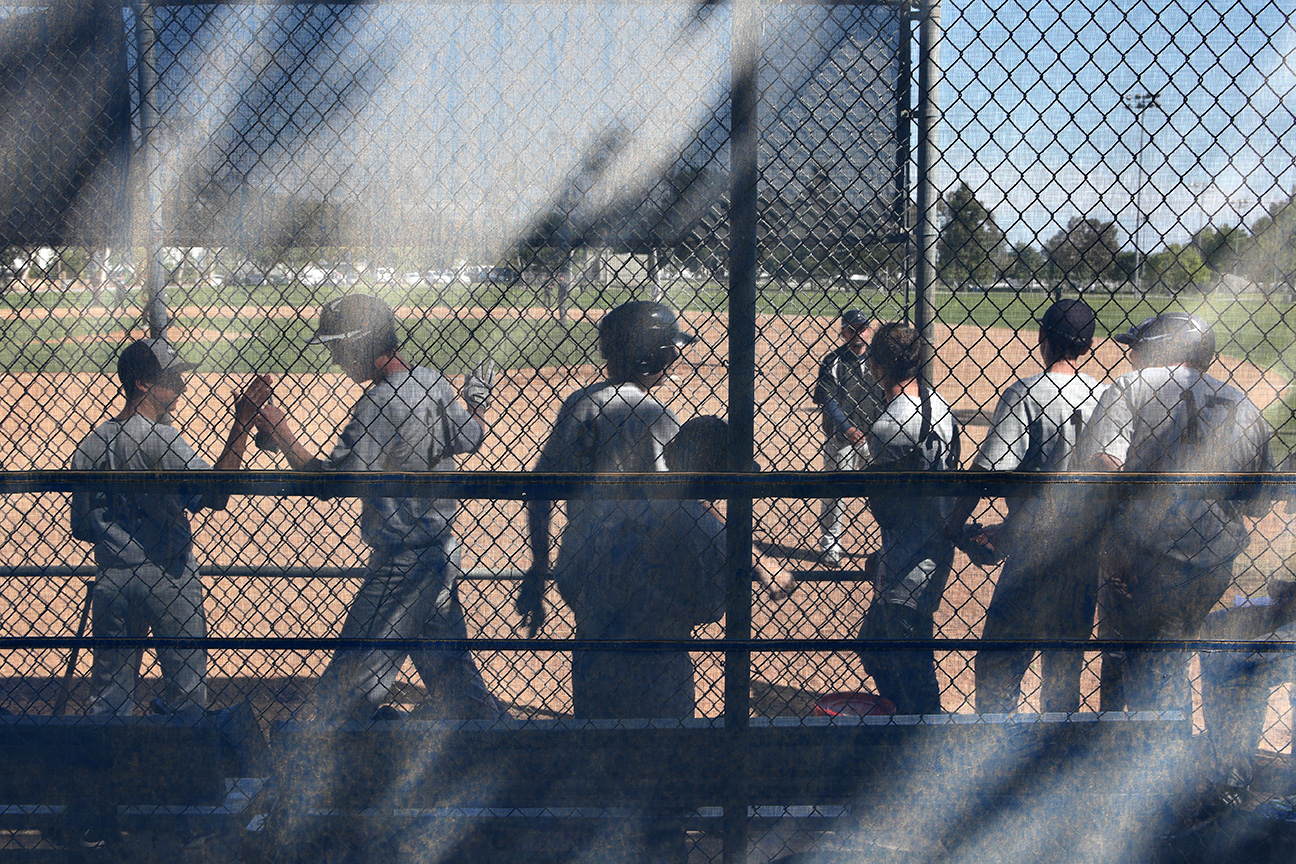 "As far as the team goes, playing with Jake hasn't been that big of a deal," said Lincoln Rosenblood, a captain for the New Roads baseball team. "The only time people have been concerned is when thinking about the other people we're playing against, but from a team standpoint, it's been all baseball and nothing else." 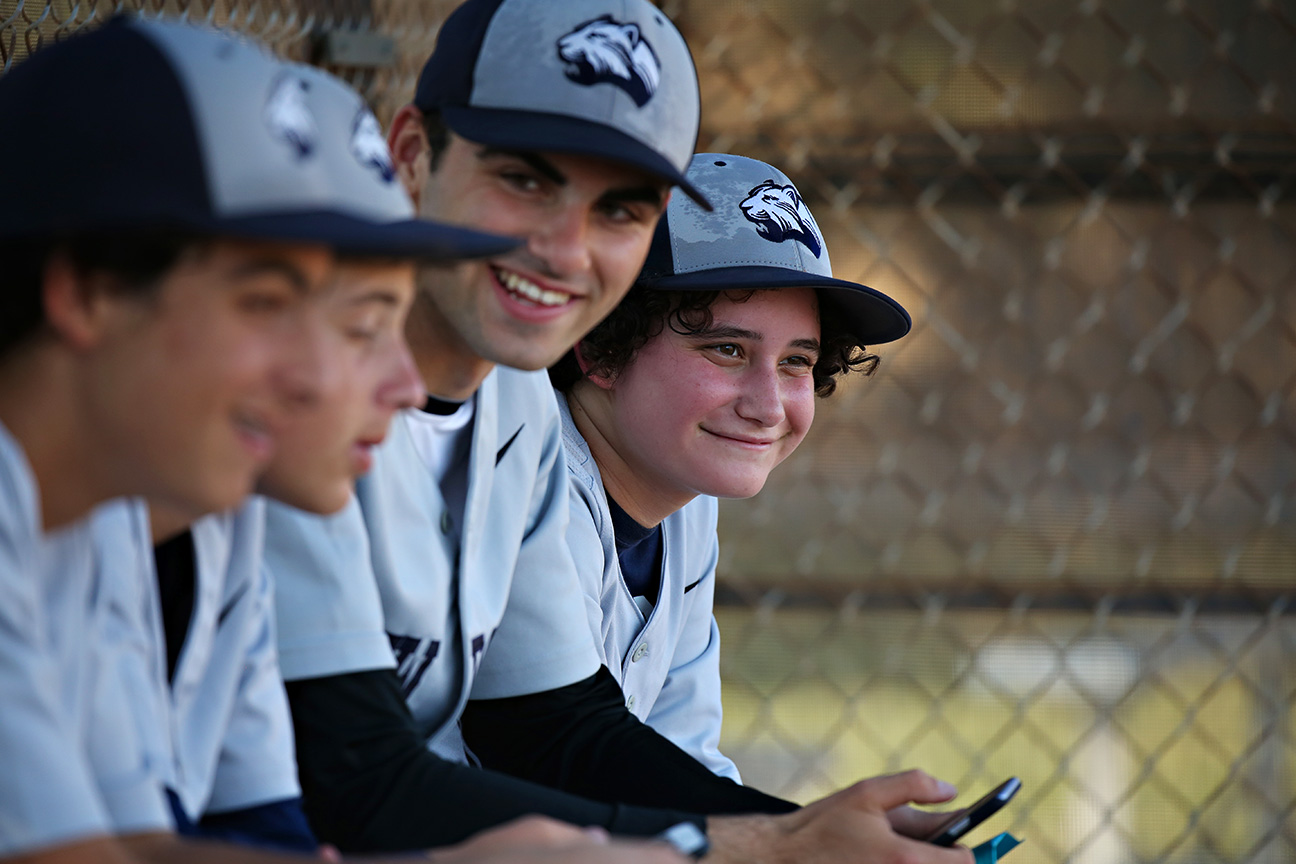 "A lot of my friends on the team have said to me that I'm a guy to them before I'm a trans guy, and that's super validating," Hofheimer says. "It really feels good when people view you that way. I know a lot of trans kids struggle with that and are labeled 'that trans kid.'" 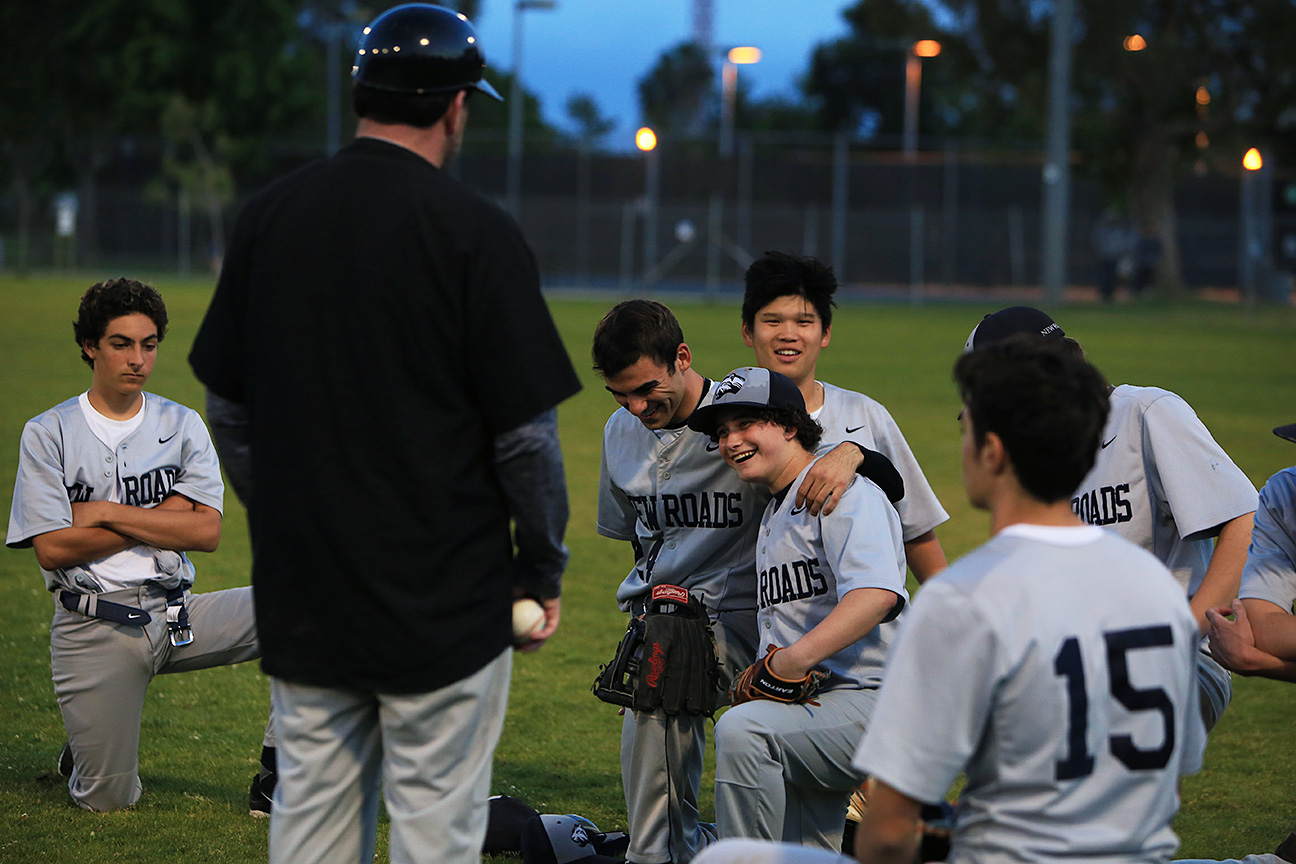 After struggling in middle school and early in ninth grade, Hofheimer has found a home at New Roads and with his team. "I have the baseball team, I have my friends whom I hang out with on a regular basis. I'm friends with a fair amount of people now, I think."