he 100-meter dash begins with a pistol's fire and ends just seconds later. But the road to the Olympics in this event is much, much longer.

It takes years of practice and training and races. And as fast as you might be, to make the U.S. Olympic team, you must go to the track and field trials held barely a month ahead of the Games. You must run a race one afternoon against some of the best sprinters in the country and finish among the top three, or be among the very fastest who did not in five preliminary heats. And then you must run again the next day and also finish among the top qualifiers in the semis. And then, shortly afterward, you must go to the line again, take your position in the starting blocks, listen for that gun to fire -- then race down the track and finish among the top three.

If you do, you're going to the Olympics to represent your country and try for a gold medal. If you don't, you can either give up your Olympic dreams or train and fight and run four more years to get to that starting line to hear that pistol fire again.

What's it like? Here's a look at the 100-meter run and the great athletes who ran it at the U.S. track and field trials in Eugene, Oregon. 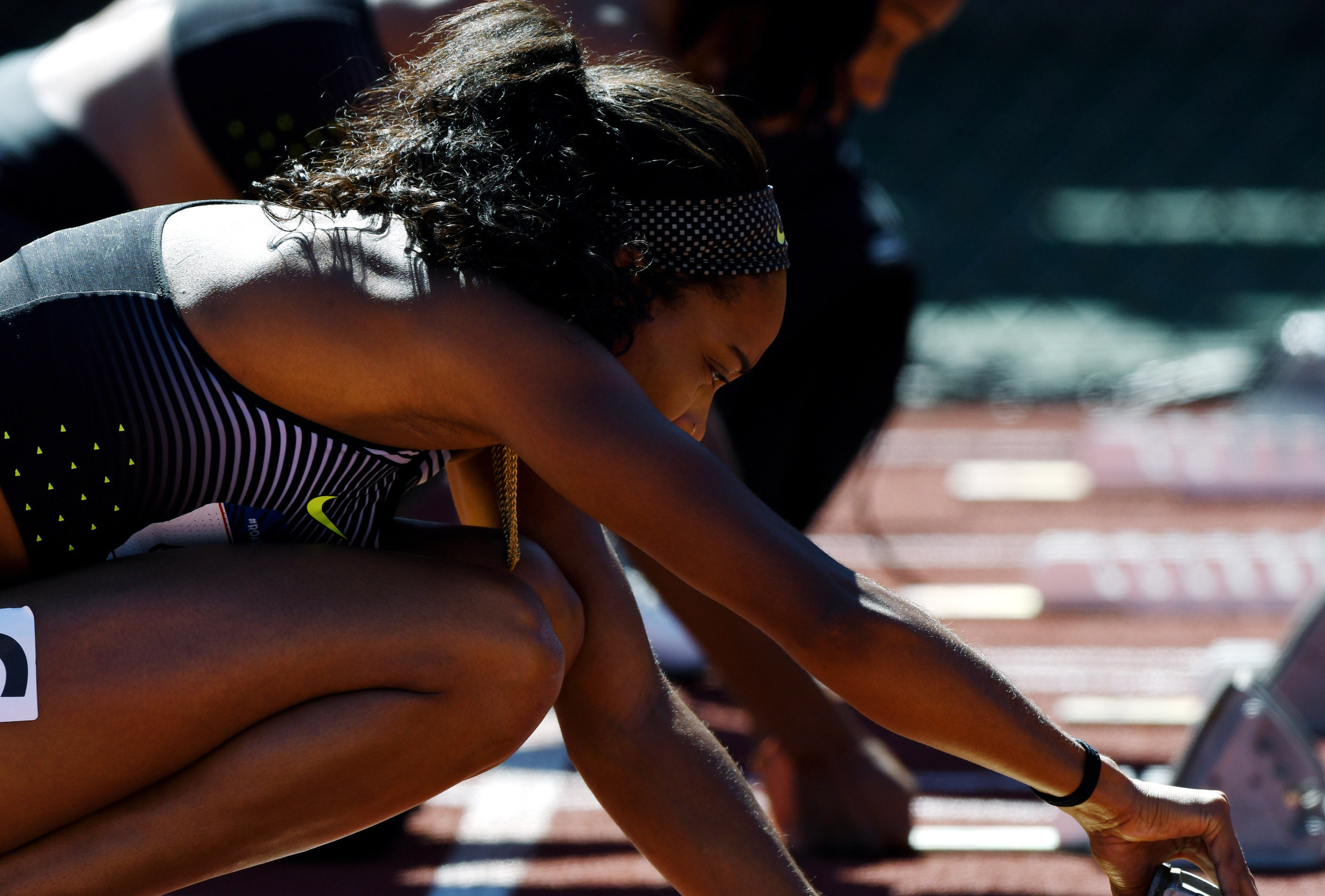 When English Gardner didn't make the Olympic team at the 2012 U.S. trials, she went to her car and cried her eyes out. As she positioned herself in the starting blocks at the current trials, she was determined to run fast -- and walk off happy, proud and an Olympian. 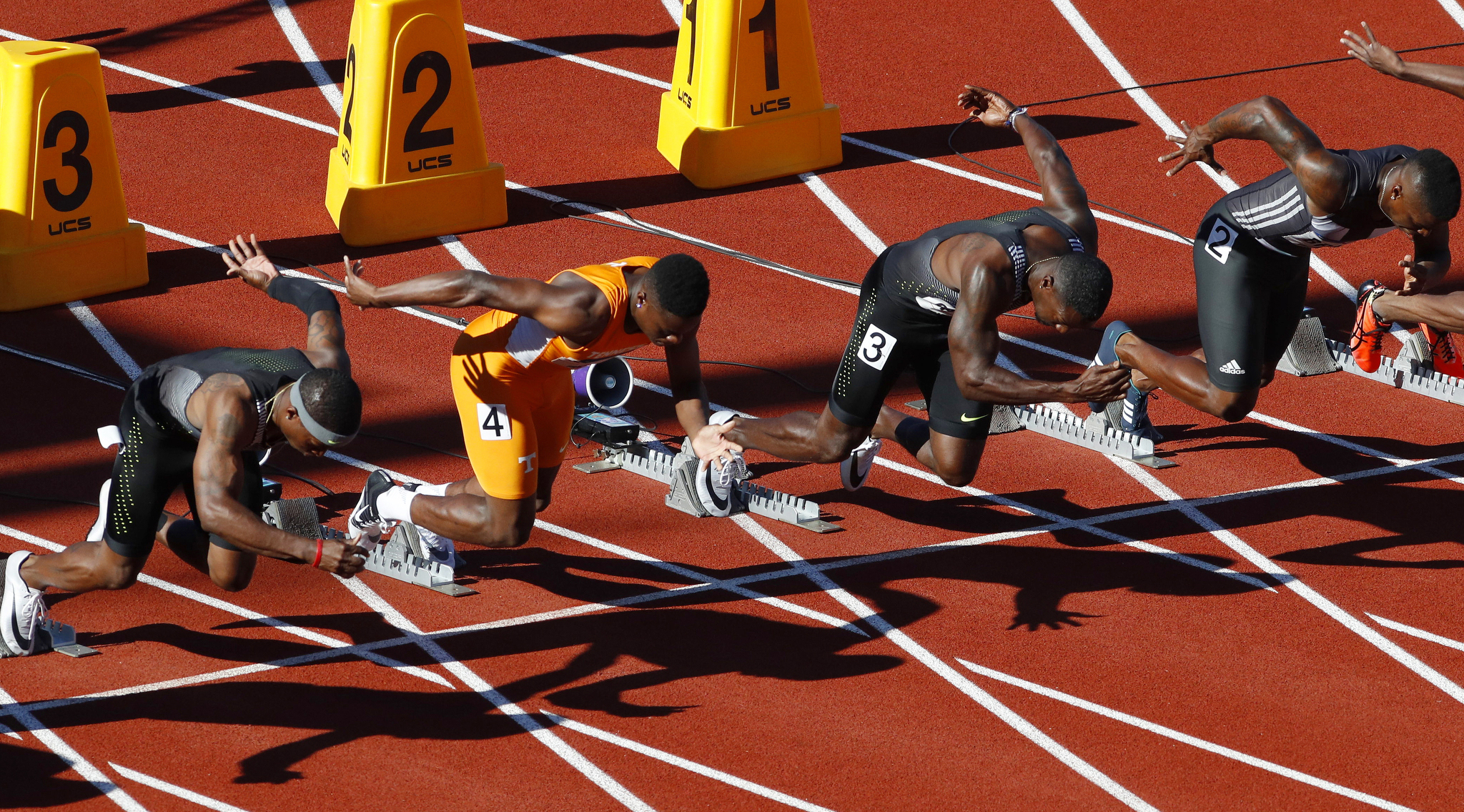 Justin Gatlin won gold in the 100 at the 2004 Olympics. He is now 34, his hair is graying and his reputation has been tainted by two PED suspensions. But he is still running fast and shooting for gold in Rio. 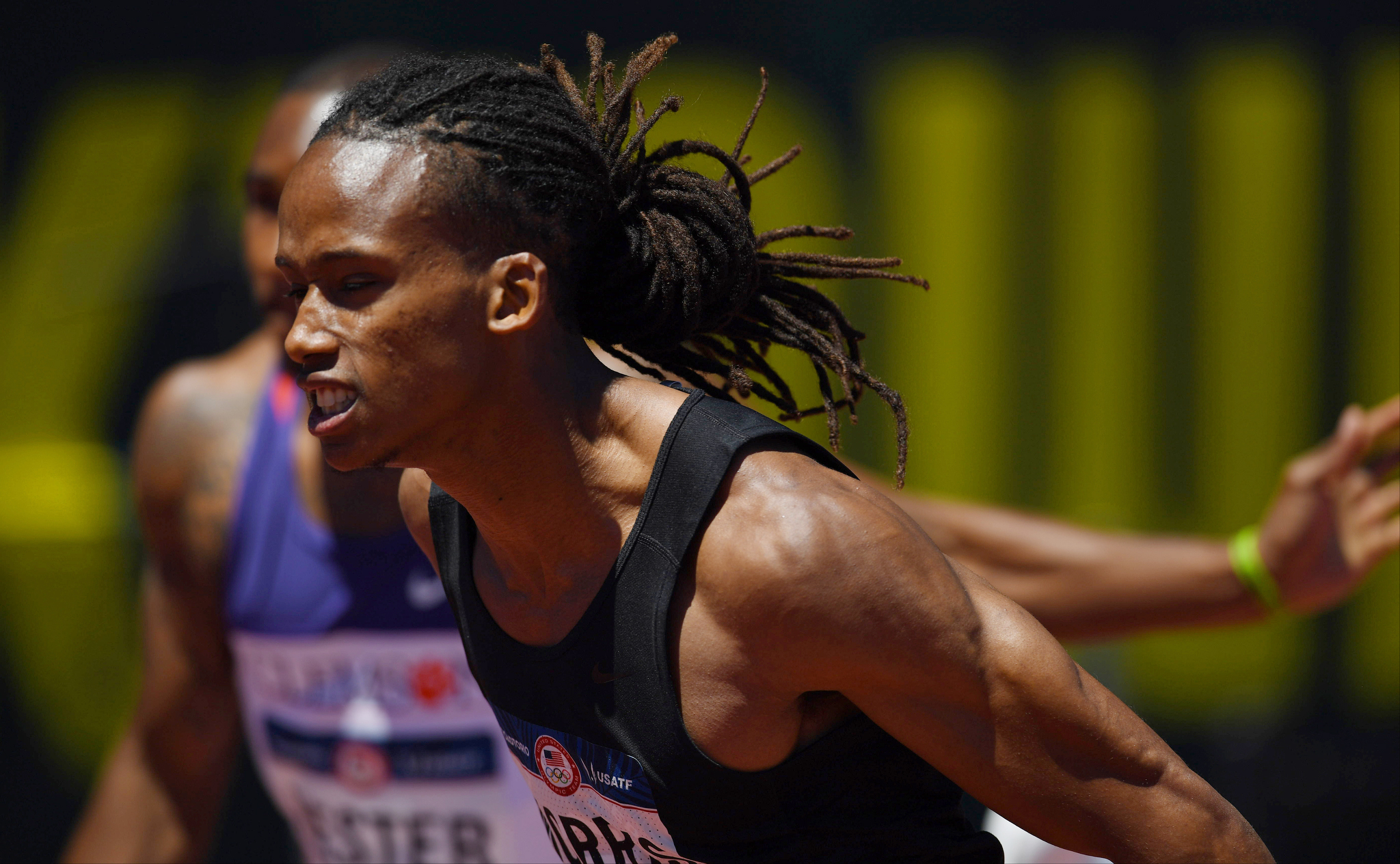 Joe Morris says you almost hold your breath during the 100. After advancing in a heat, he also probably was holding his breath in hopes that he would be one of the top three fastest sprinters so as to qualify for the Olympic team. 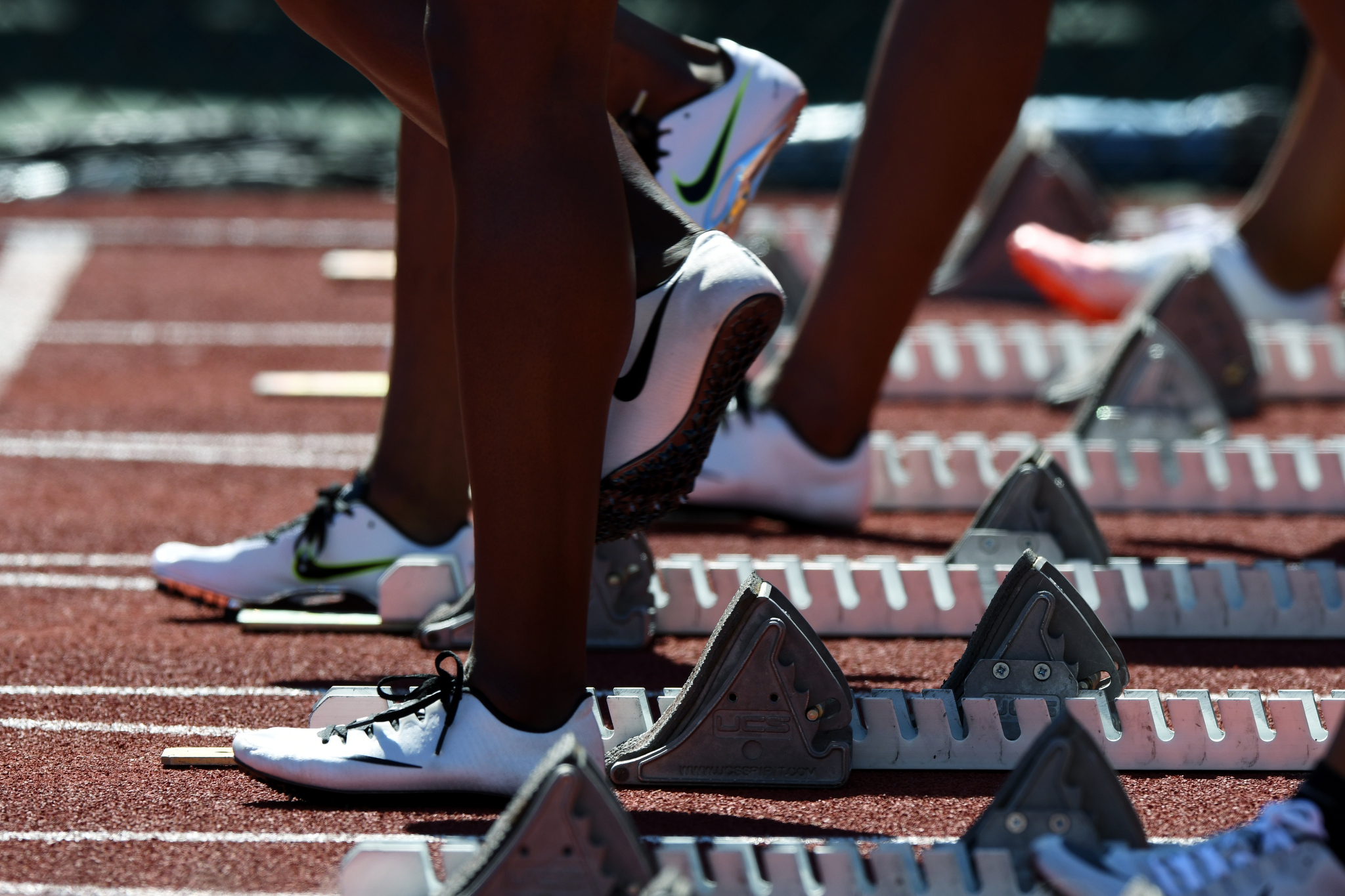 The road to Rio is not an easy one. It is a road that begins many years before you place your feet in the starting blocks at trials, at which point your destination might be reached in 100 meters -- or your road ended. 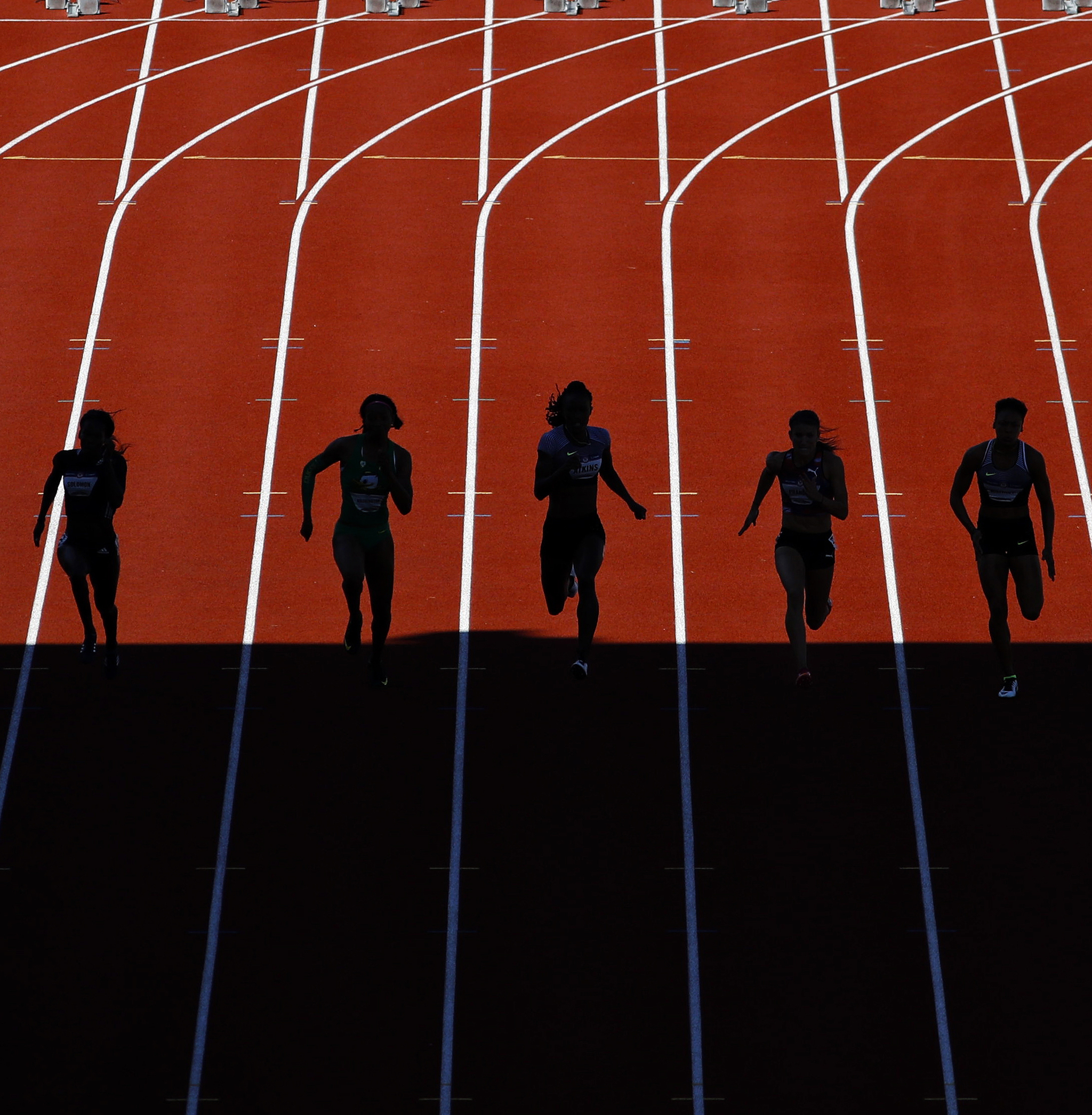 As we see the shadowy forms of women sprinters in one of the 100 semis, the questions are: Who will advance to the finals, and who will go on to Rio? 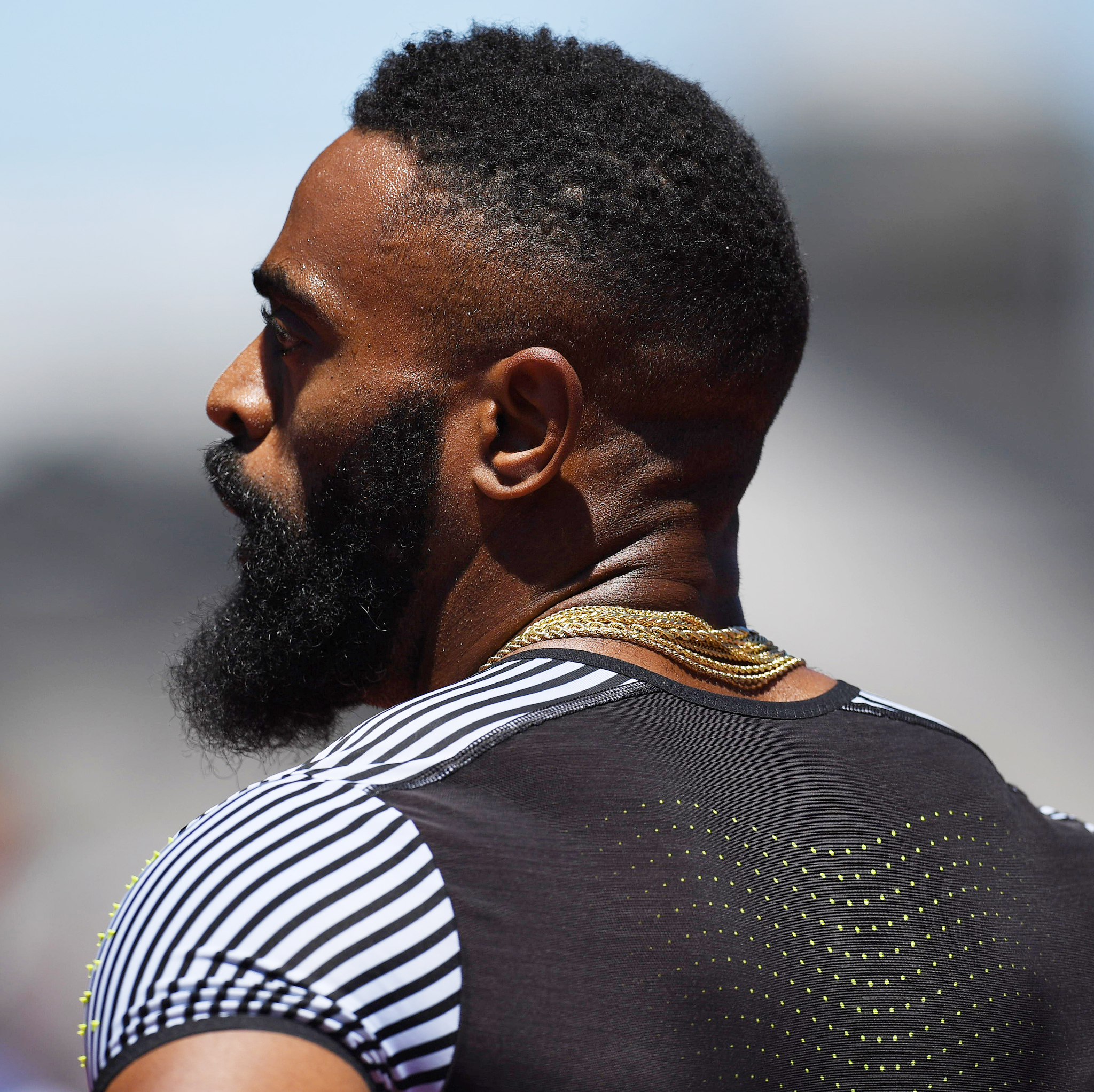 Tyson Gay has the second-fastest time in history in the 100 and has been on two Olympic teams. But he has never medaled and he will not run the 100 in Rio after finishing fifth at these trials. 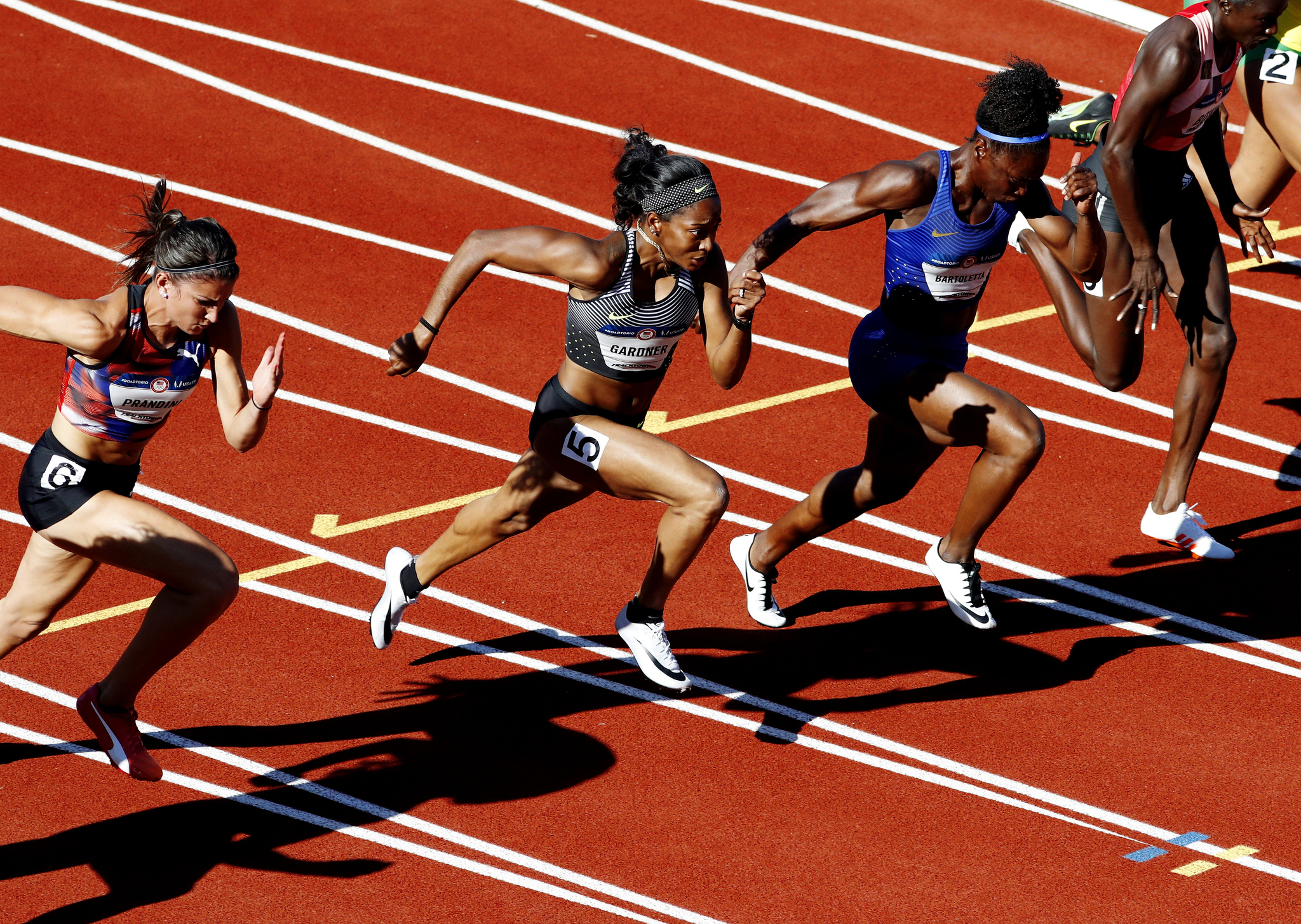 Starting off fast is one thing in the 100, but finishing faster -- and stronger -- is more important. English Gardner had the form midway through the final. But did she have the finish, as well? 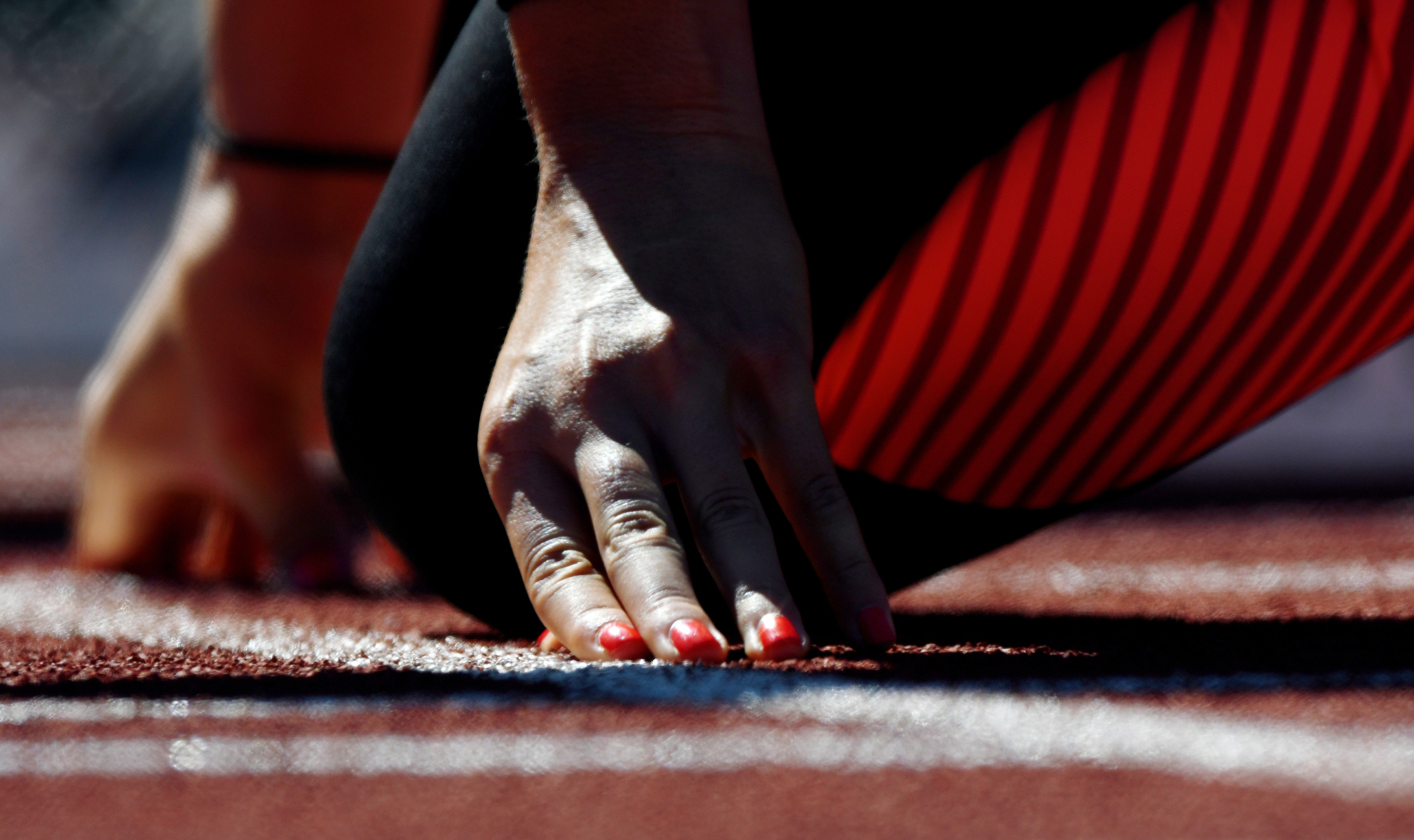 Jenna Prandini had her fingers on the track and her hopes high in her heart, but she did not finish in the top three and qualify for the 100 in Rio. 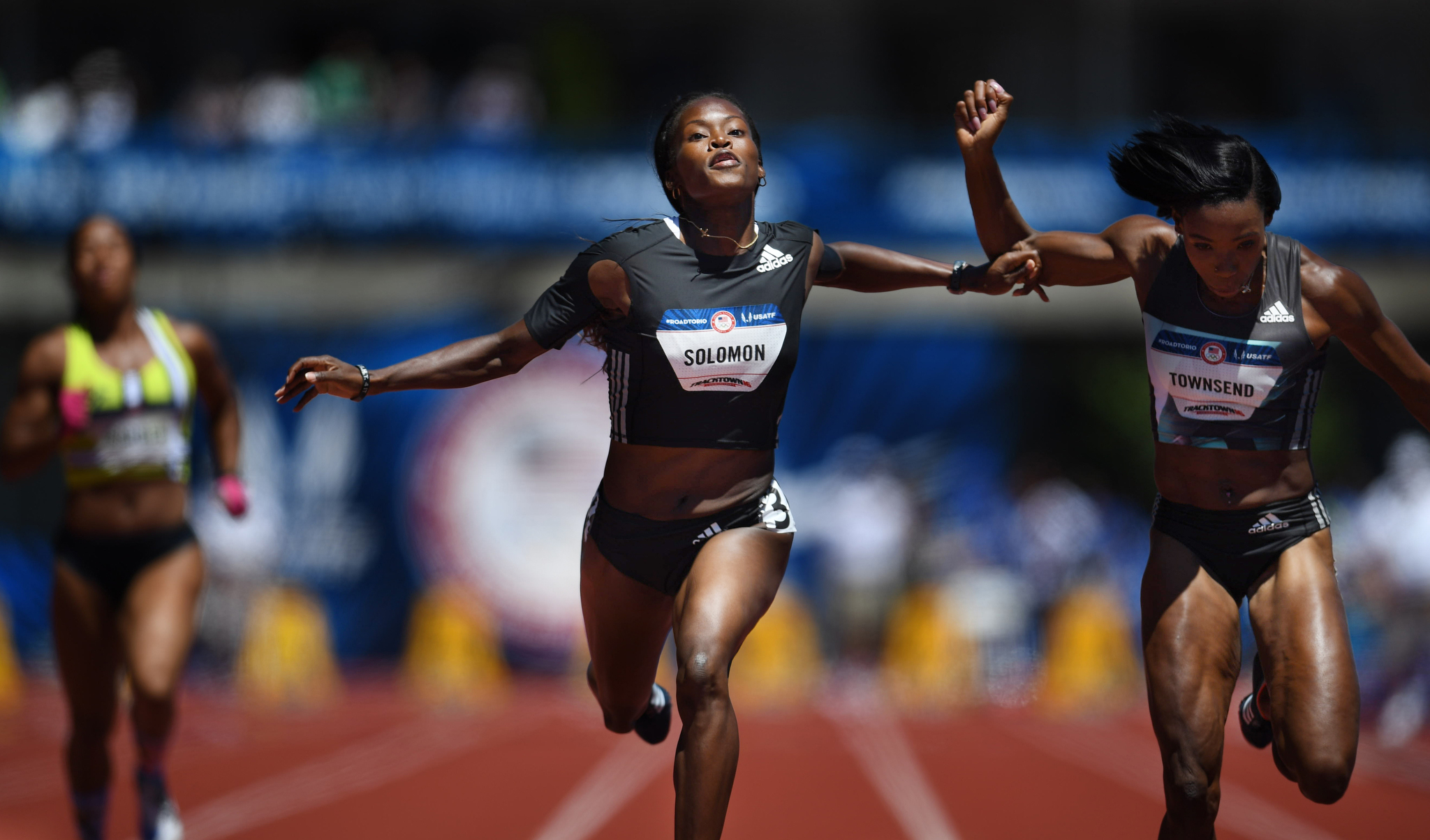 Shalonda Solomon crosses the finish line to advance in an early 100 heat. Unfortunately, she was not able to do so in the semifinals. 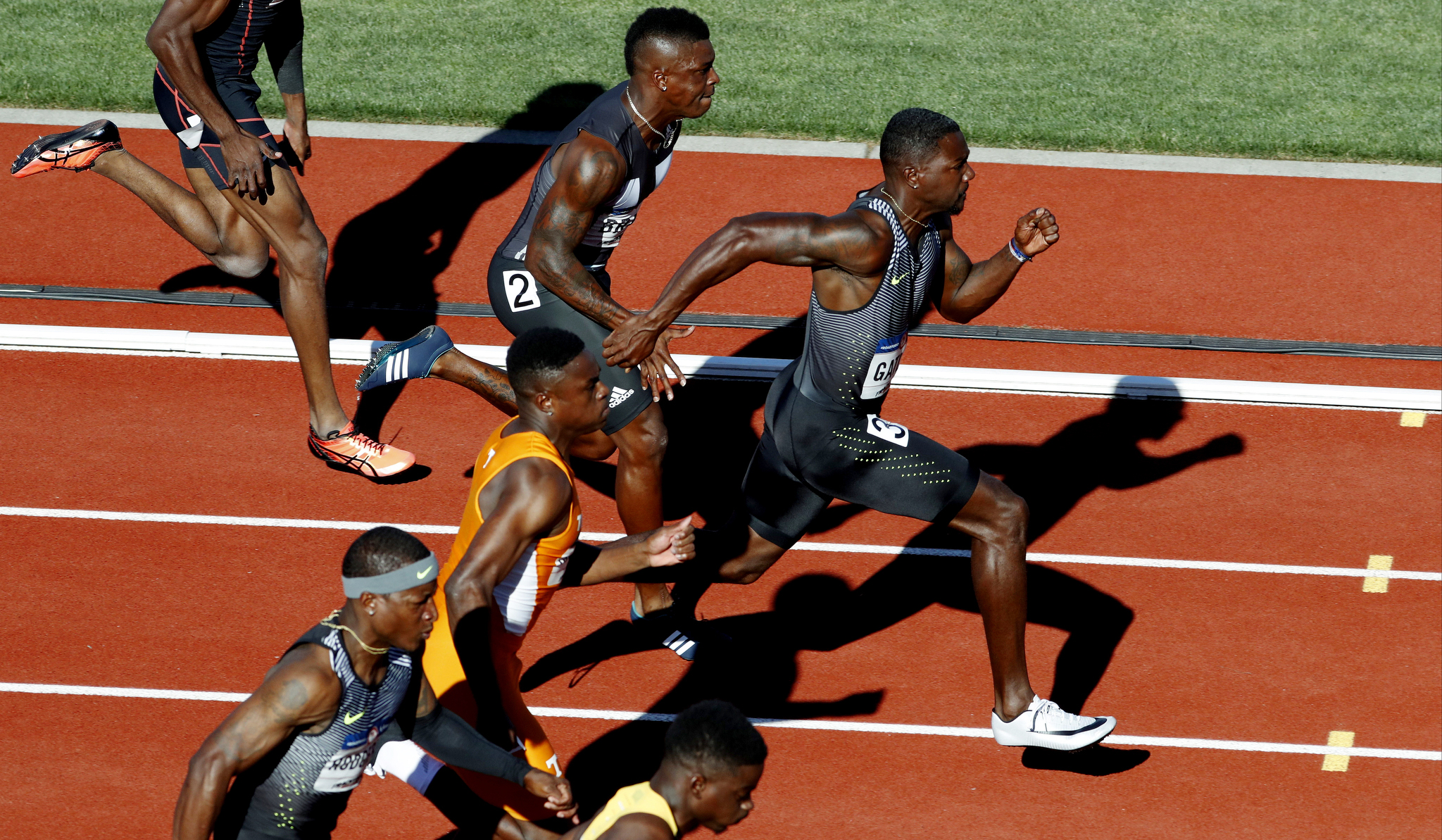 Justin Gatlin says that, at 60 or 70 meters, it's all about running strong, fast and tall. If you think too much, then "You're reaching for something that isn't there.'' Trayvon Bromell (bottom) says just keep your knees up and keep going. (Audio Trayvon Bromell) 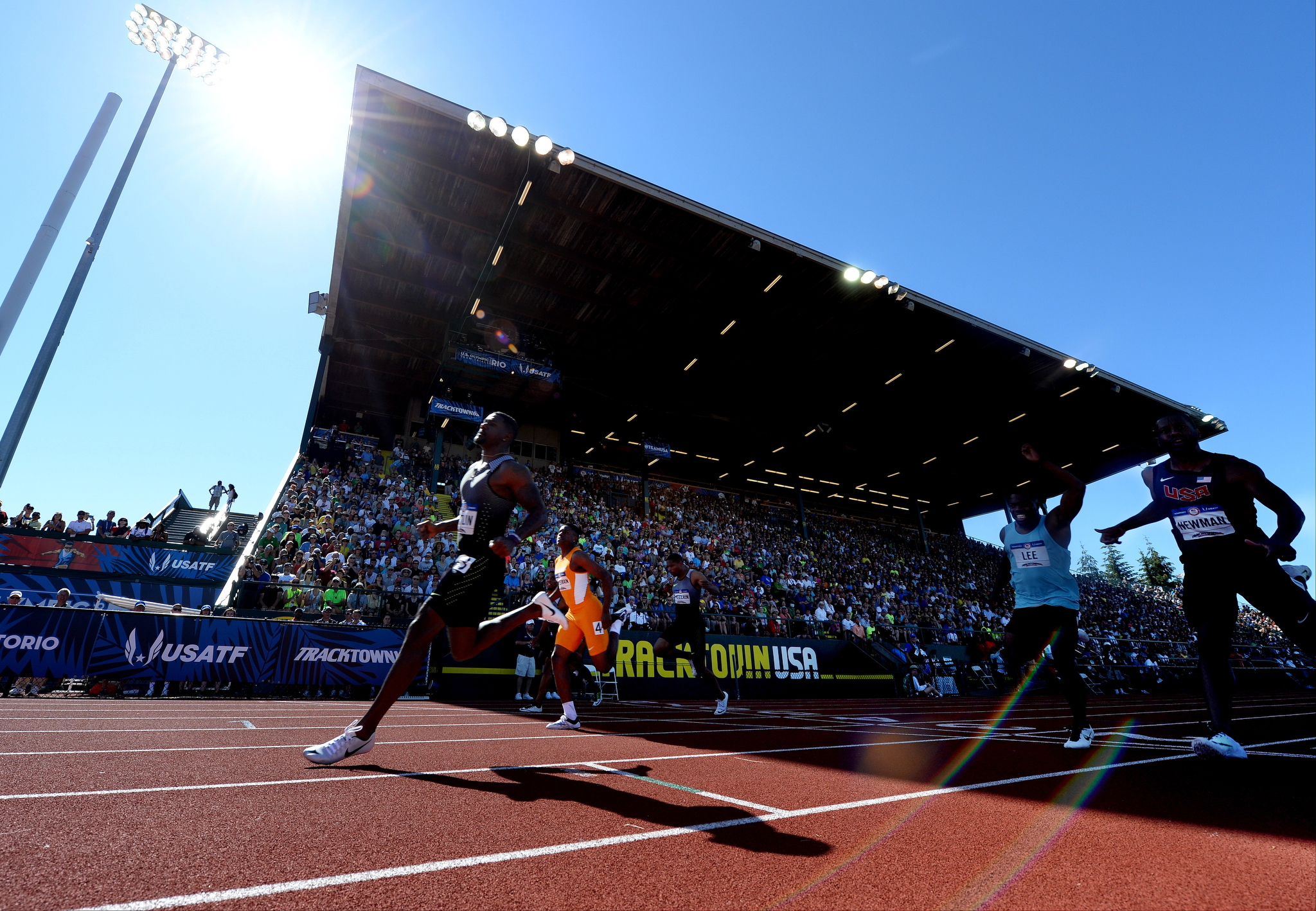 Justin Gatlin won the 100 final in 9.8, the fastest time in the world this year. "I got down on one knee after I crossed the finish line and was crying inside.'' (Audio Justin Gatlin) 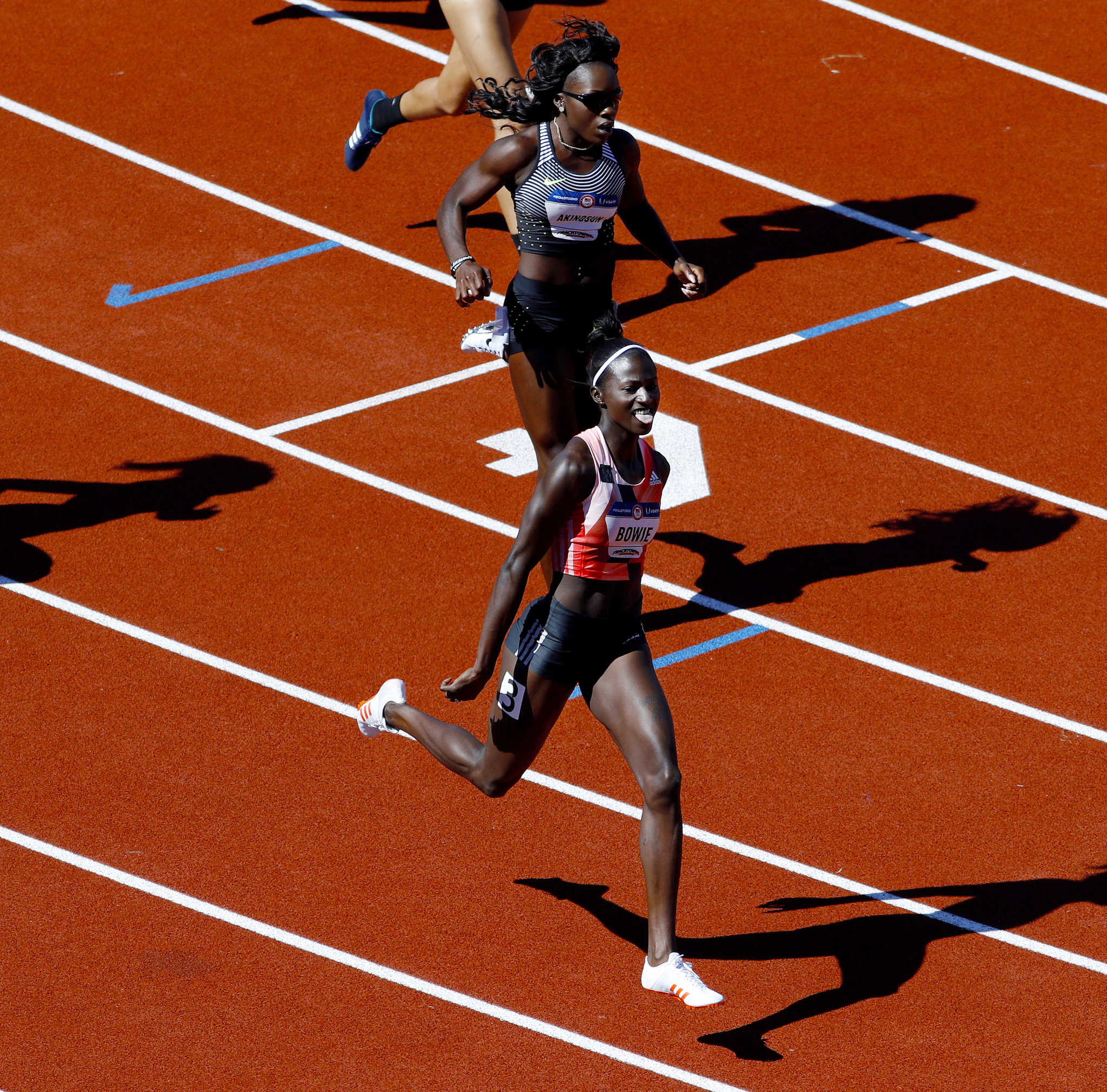 Tori Bowie was happy when she advanced to the final in the 100. She was even happier when she finished third in the final to qualify for her first Olympic team. 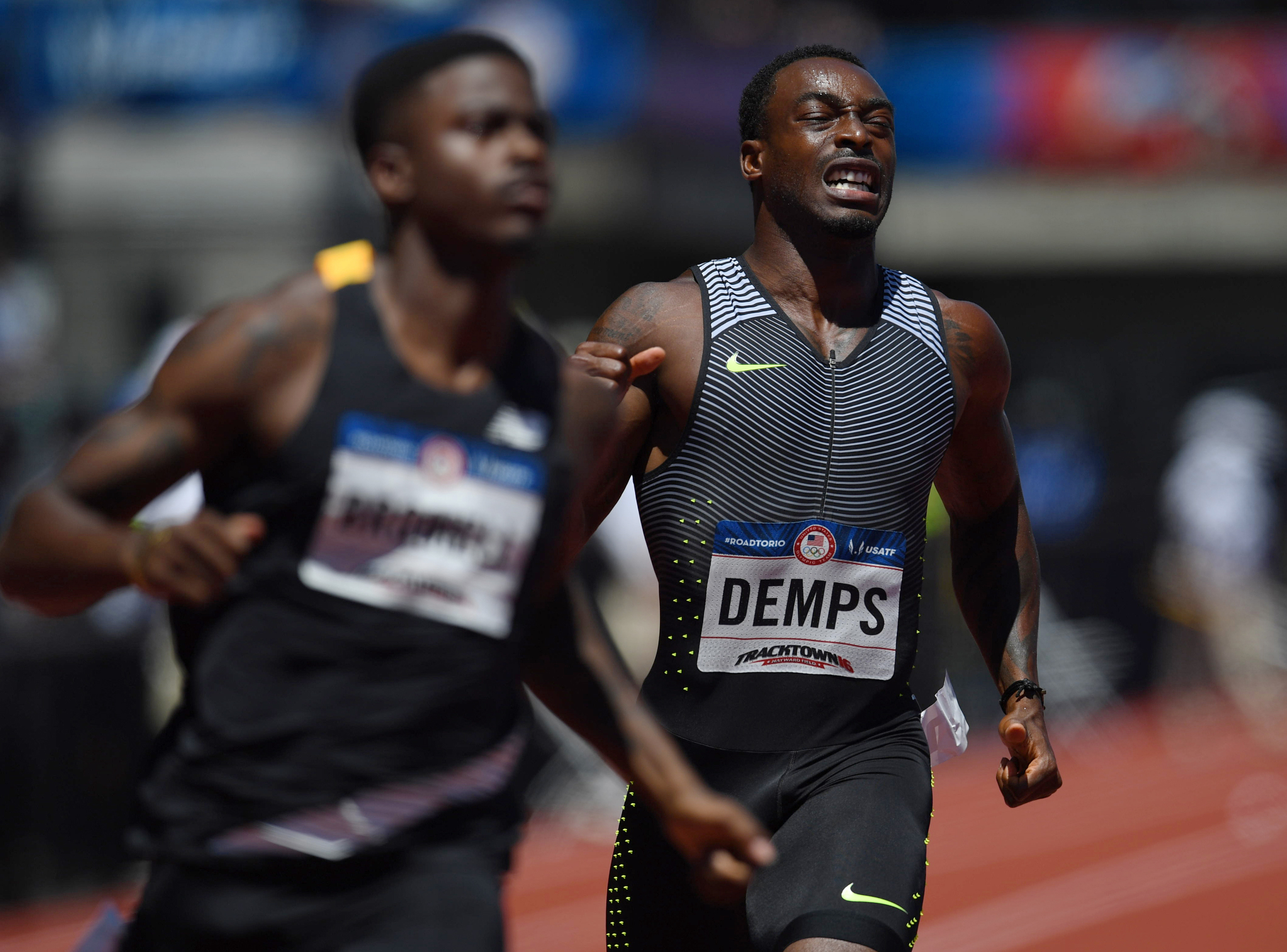 As glorious and happy as the Olympic trials can be for the qualifiers, it can be devastating for the ones who fall short. Jeff Demps knew that feeling after losing in a 100 heat. 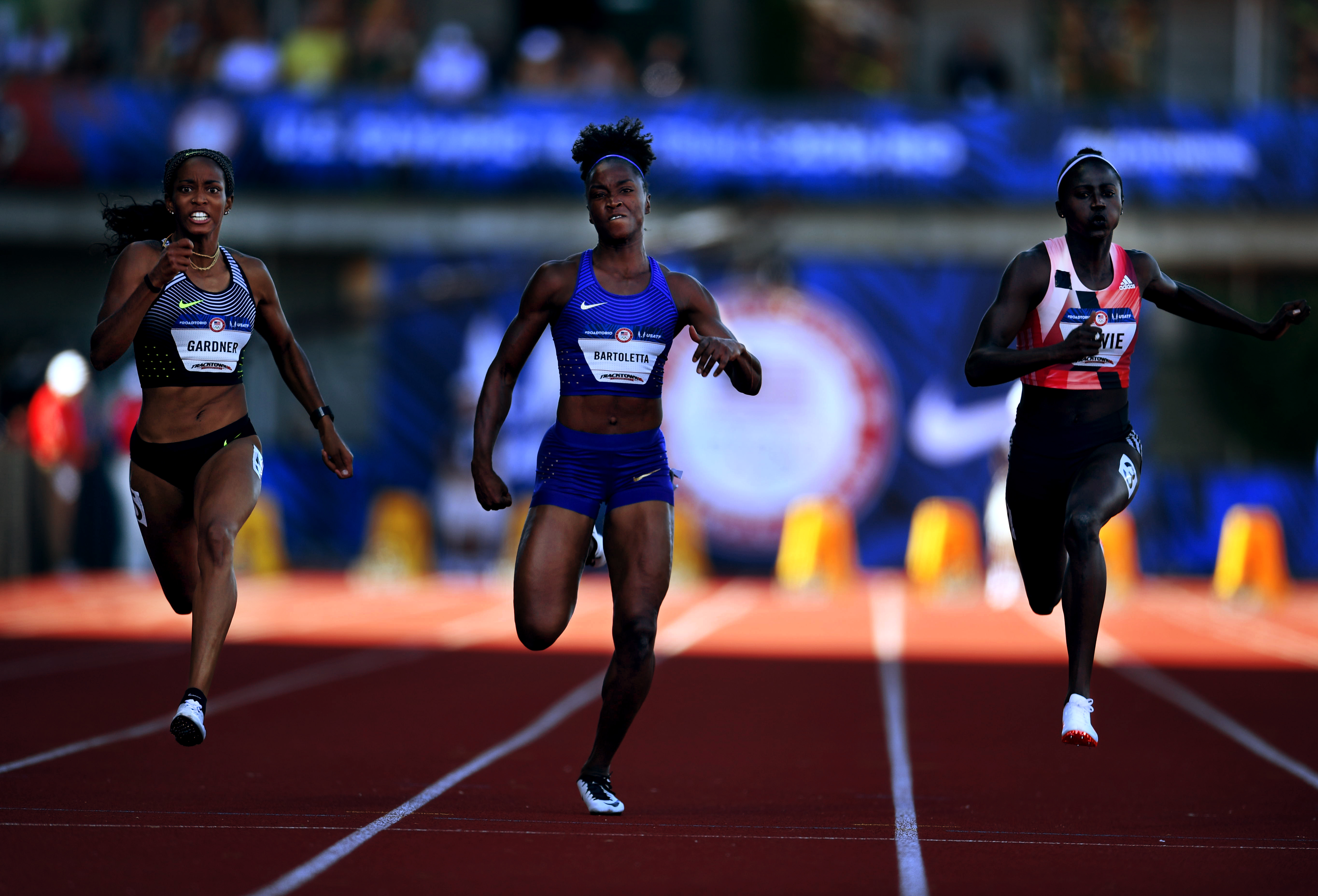 Yes, English Gardner did, winning the 100 final in 10:74, the second-fastest in the world this year, edging Tianna Bartoletta (center) and Tori Bowie (right). "With the help of these ladies, we were able to give the show that we promised from the beginning." 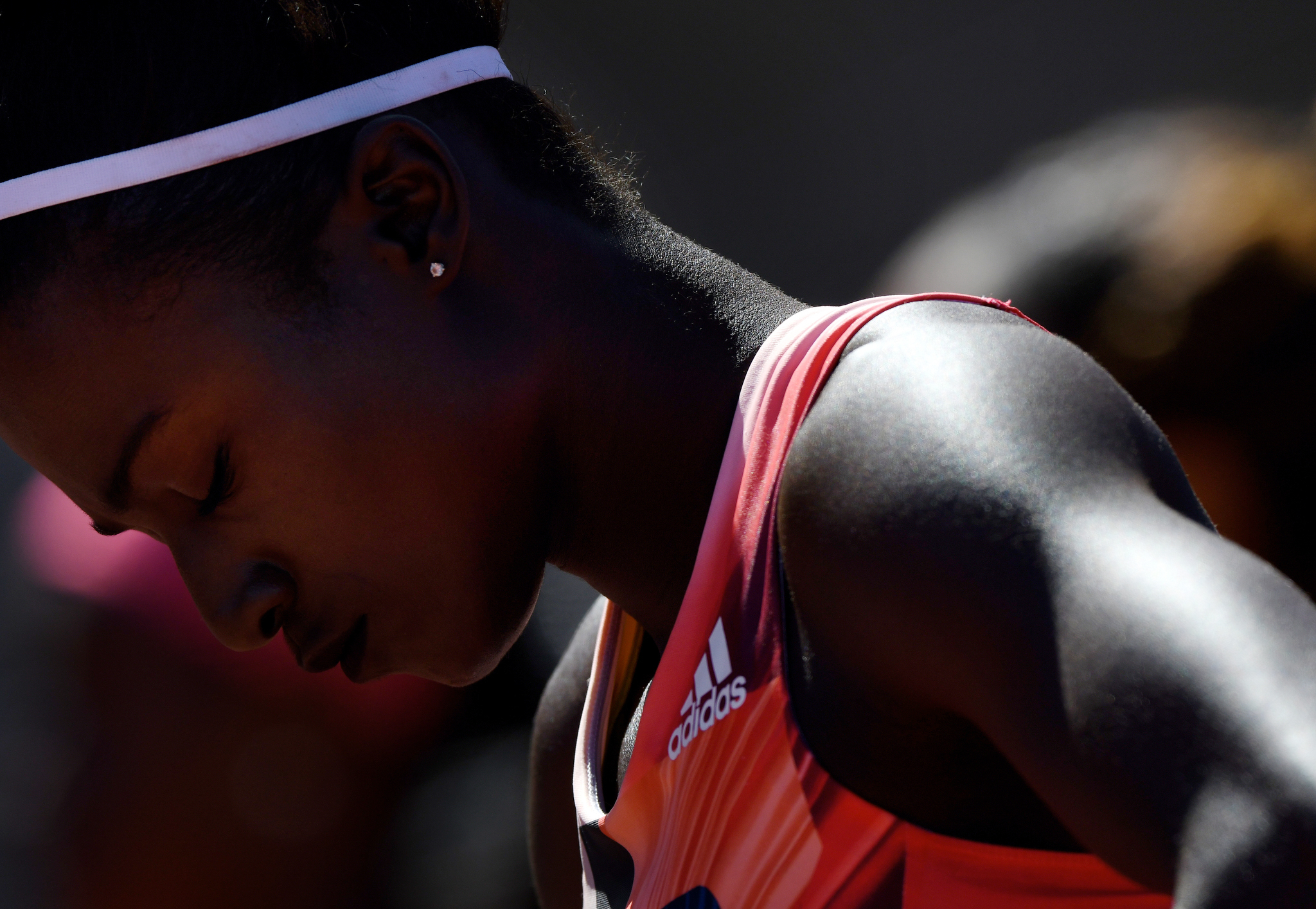 Tori Bowie reflects during a moment in the sun. "Since 2012, I've been saying that whatever happened today, I'm going to be thankful.'' 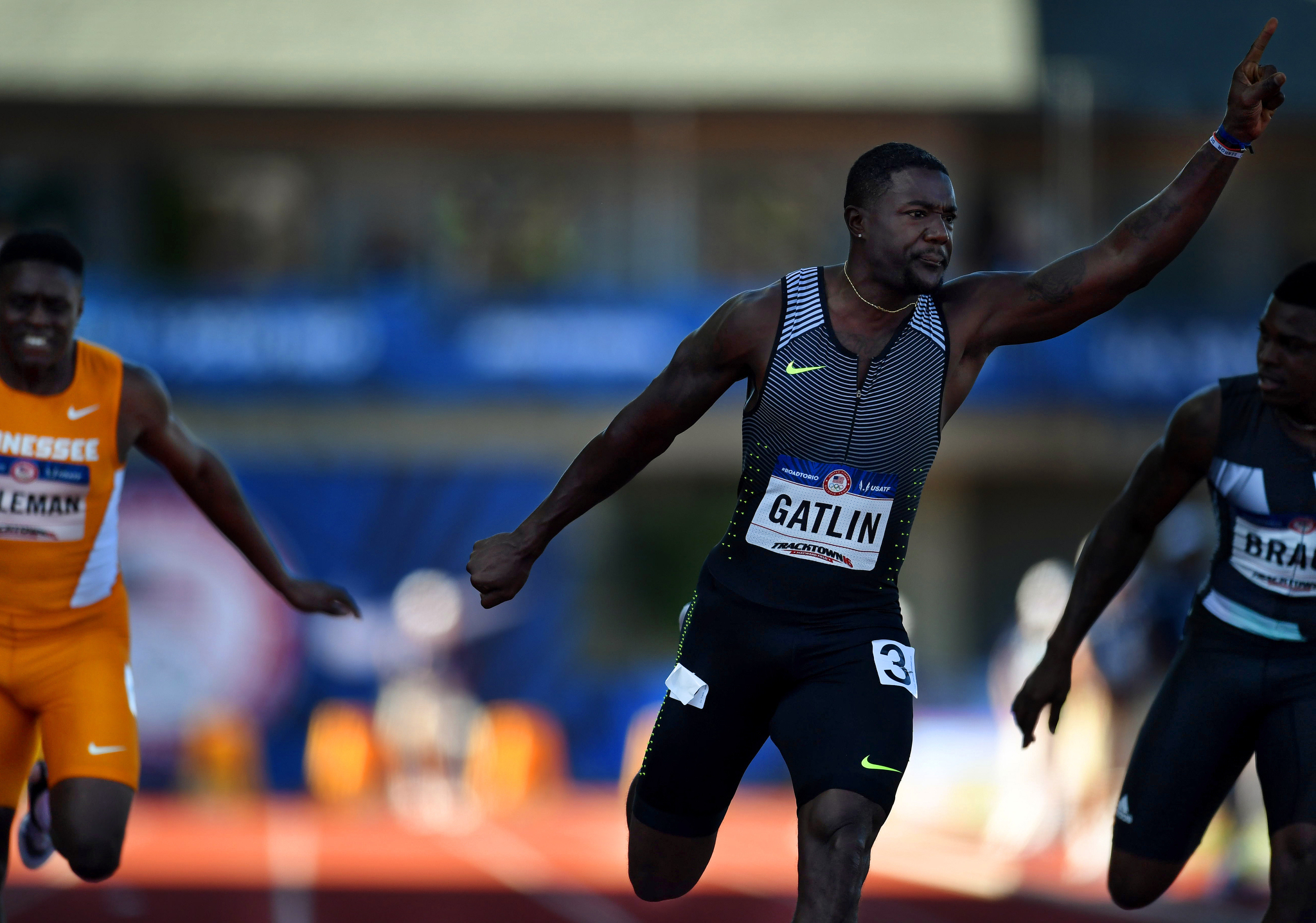 Is Justin Gatlin pointing to the crowd after his win or pointing toward Rio? "My family had their tickets, so it put the pressure on me to make sure I punch my ticket."

After crossing the line to win, English Gardner quickly thought back to crying in the car in 2012. This time, any tears were those of happiness. 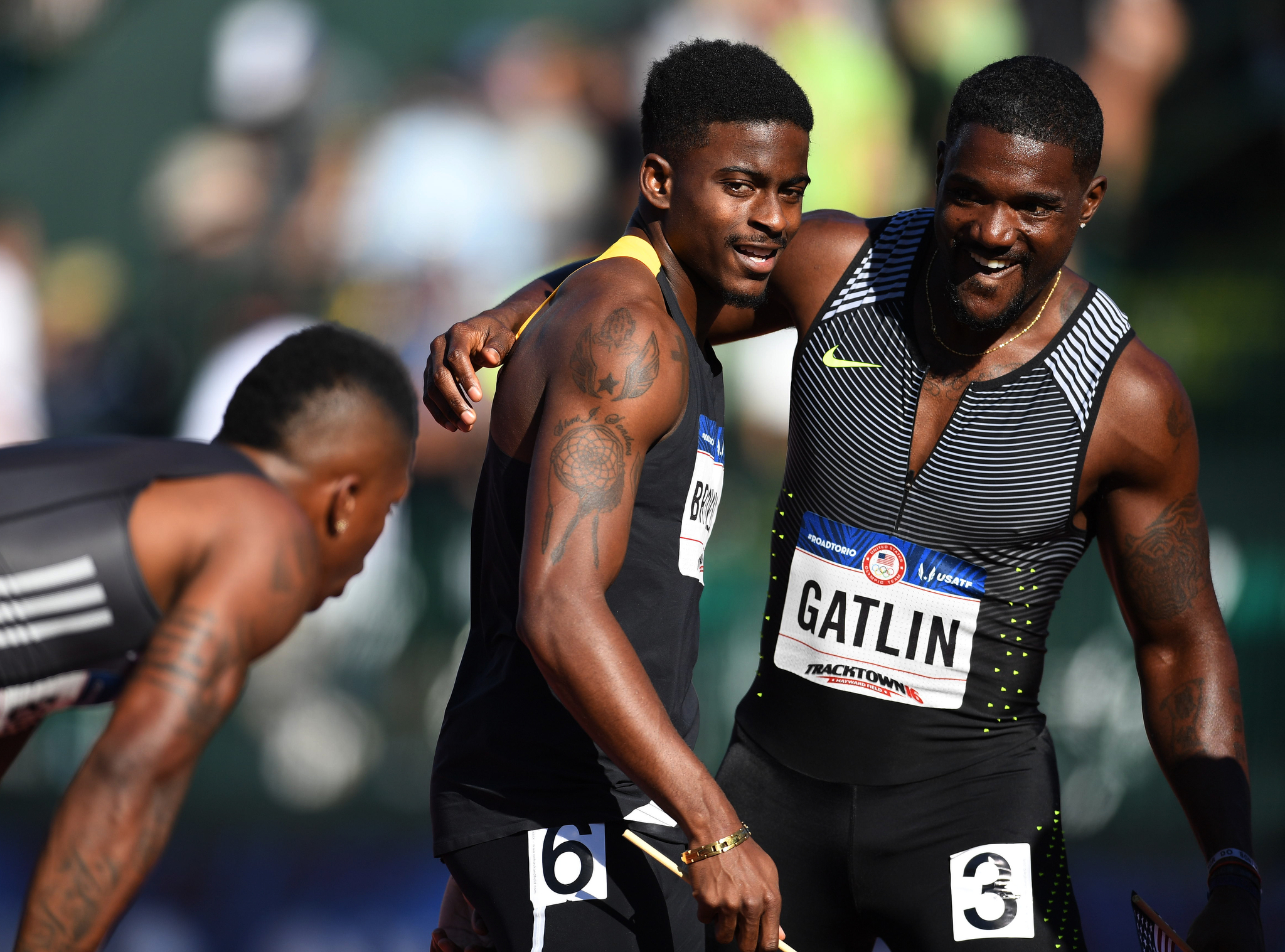 Marvin Bracy was clearly delighted to make the Olympic team with his third-place finish. It was so emotional, though, "By the time I get back to the hotel, I'll probably break down in tears.'' (Audio Trayvon Bromell)

Tianna Bartoletta not only qualified for Rio in the 100 but also will compete there in the long jump, something very few women have done in the Olympics. As hard as running the 100 is, adding the long jump might be even more impressive.