ries Merritt won the gold medal in the 110 hurdles at the 2012 Olympics. He set the world record in the event a month later. As impressive as that is, what he has been able to overcome over the past three years is even more amazing.

Merritt's kidneys began failing in 2013 to the point that they were functioning at only 10 percent. Last September, he underwent a kidney transplant. Despite that, he is still competing, still hurdling and is still among the best in the world.

You may have your attention fixed on Michael Phelps, Simone Biles and Usain Bolt at the upcoming Olympics, but Merritt is someone you had better keep in your mind, because his story is incredible and inspiring.

When Merritt received the news that his kidneys were functioning at just 10 percent due to a genetic disorder, he feared that he never would run again. Well, briefly. Because this is a man who was not about to give in -- to anything. 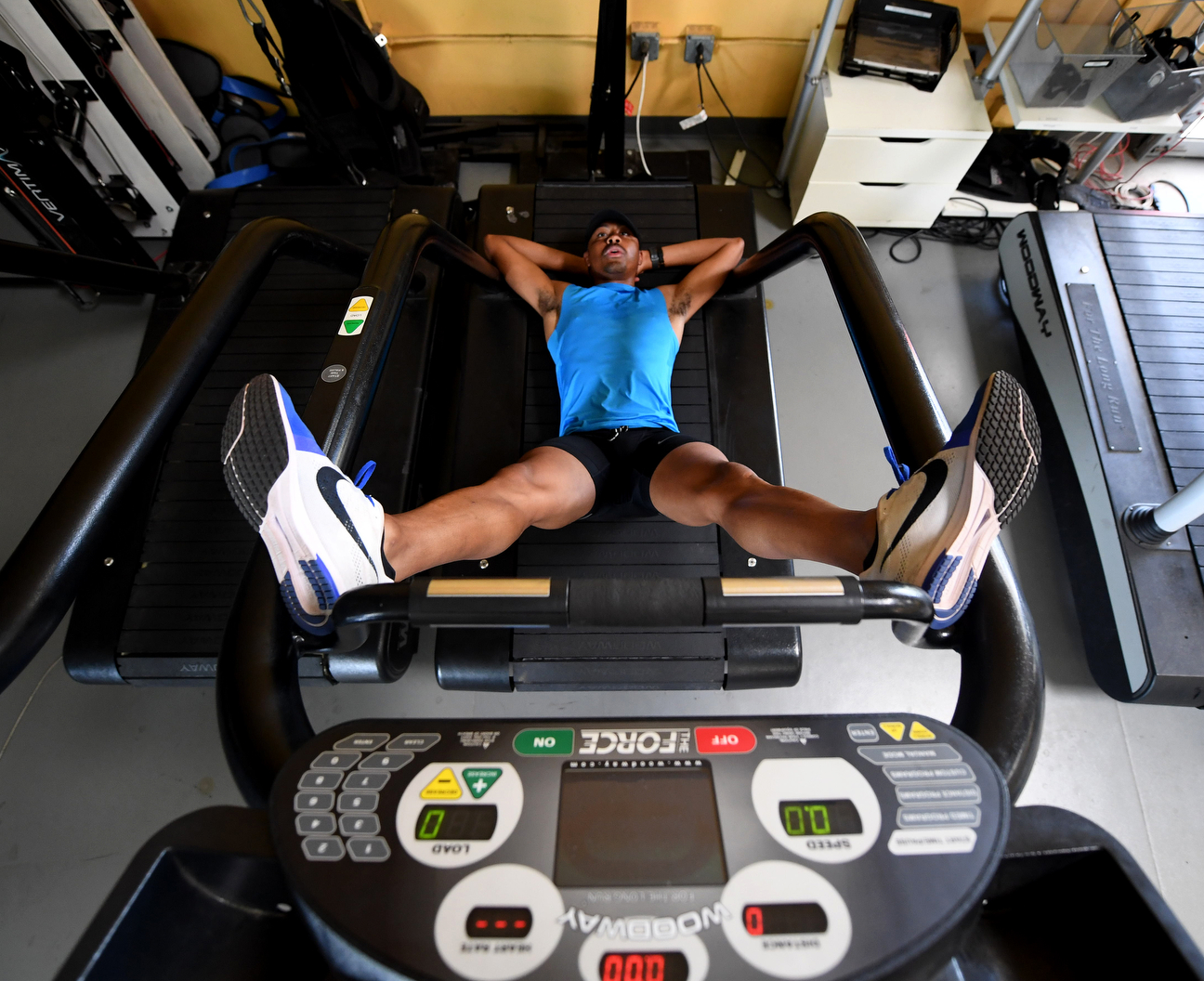 If anyone deserves a relaxing cooldown, it's Merritt, seen here stretching out on a treadmill at the EXOS facility in Scottsdale, Arizona. The Olympic athlete underwent a kidney transplant last September. 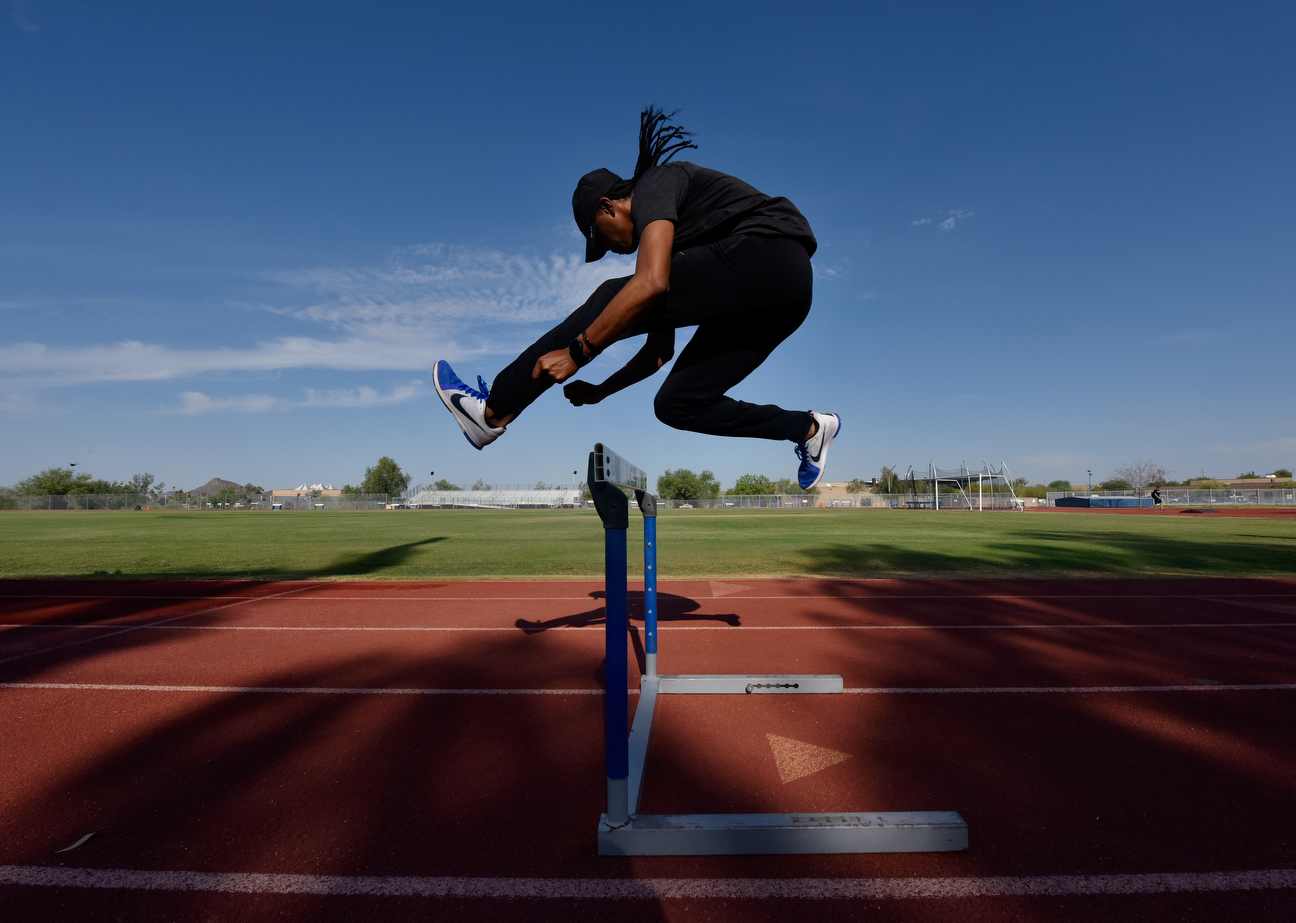 He owns the world record in the 110 hurdles and won the Olympic gold medal in the event in 2012, yet Merritt calls the hurdles "your worst enemies.'' But recovering from his kidney transplant was as challenging as anything he had faced. 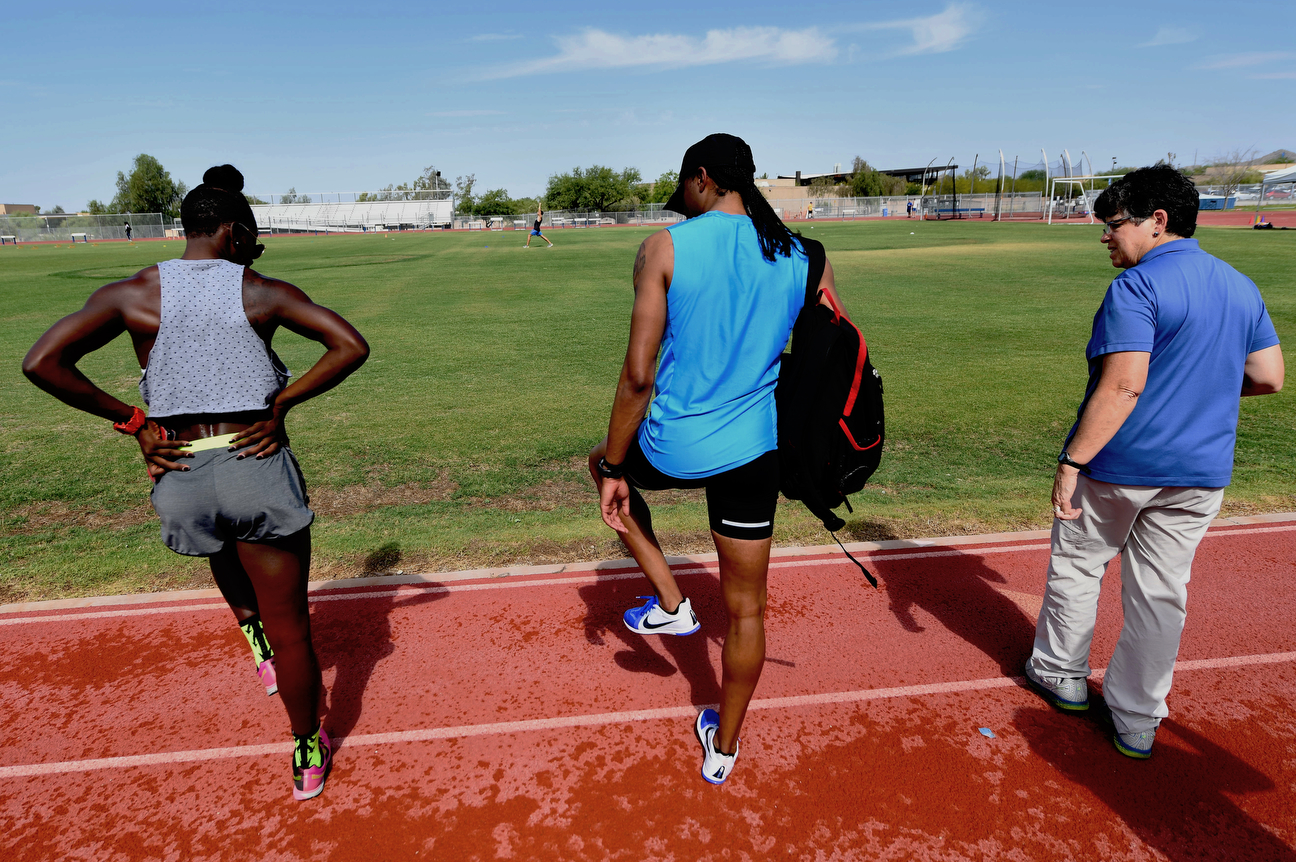 A drug-testing official from the United States Anti-Doping Agency is to Merritt's right as he does some stretching. He takes medication for his kidney every 12 hours, but those drugs are either neutral or could slightly weaken muscle -- they're definitely not performance-enhancers. 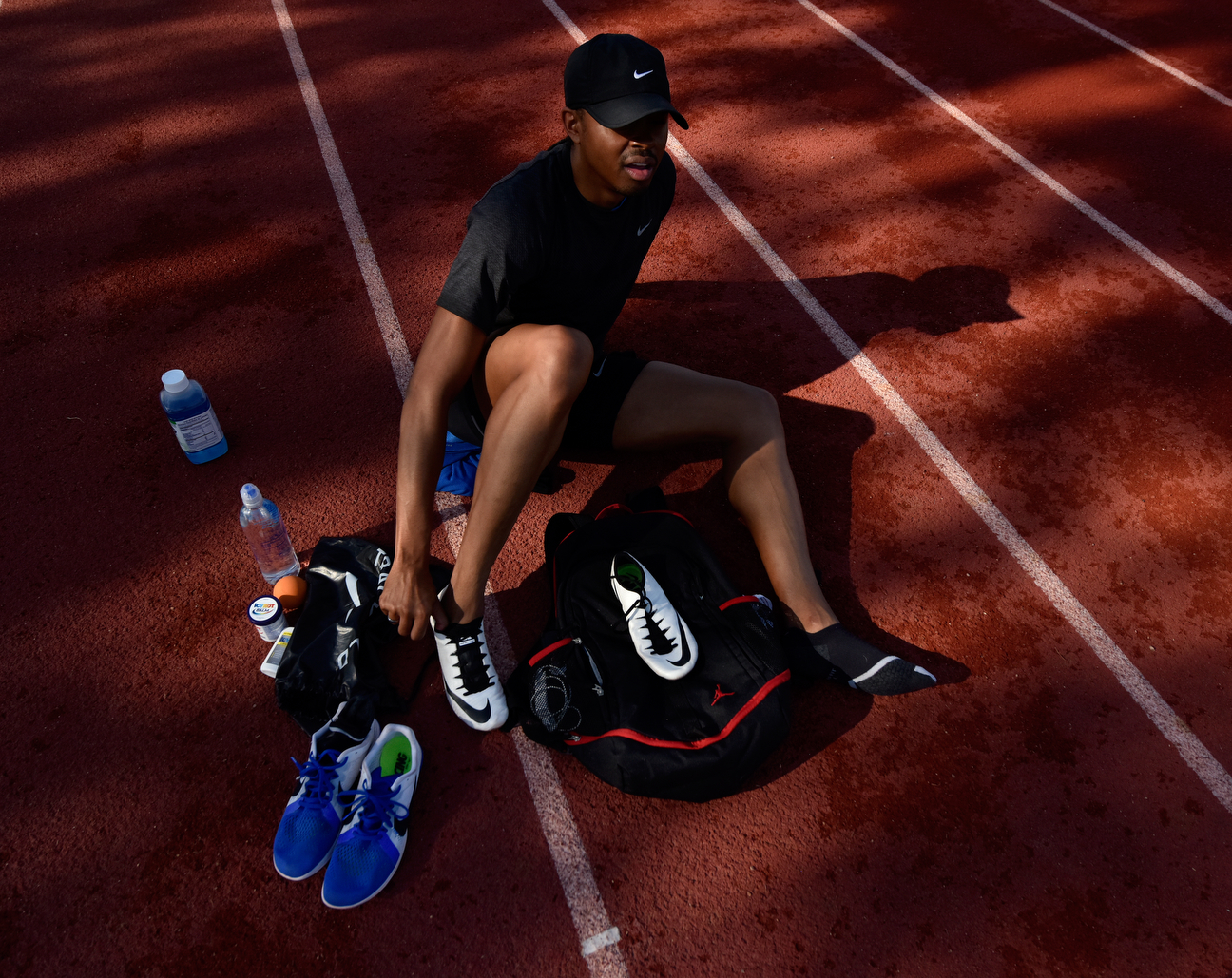 Putting on his shoes for a training session, Merritt felt much better than he did when he donned them for the 2015 world championships in Beijing. At that point, his kidney was functioning at just 10-15 percent, and he was scheduled for his transplant just days later. He still finished third. 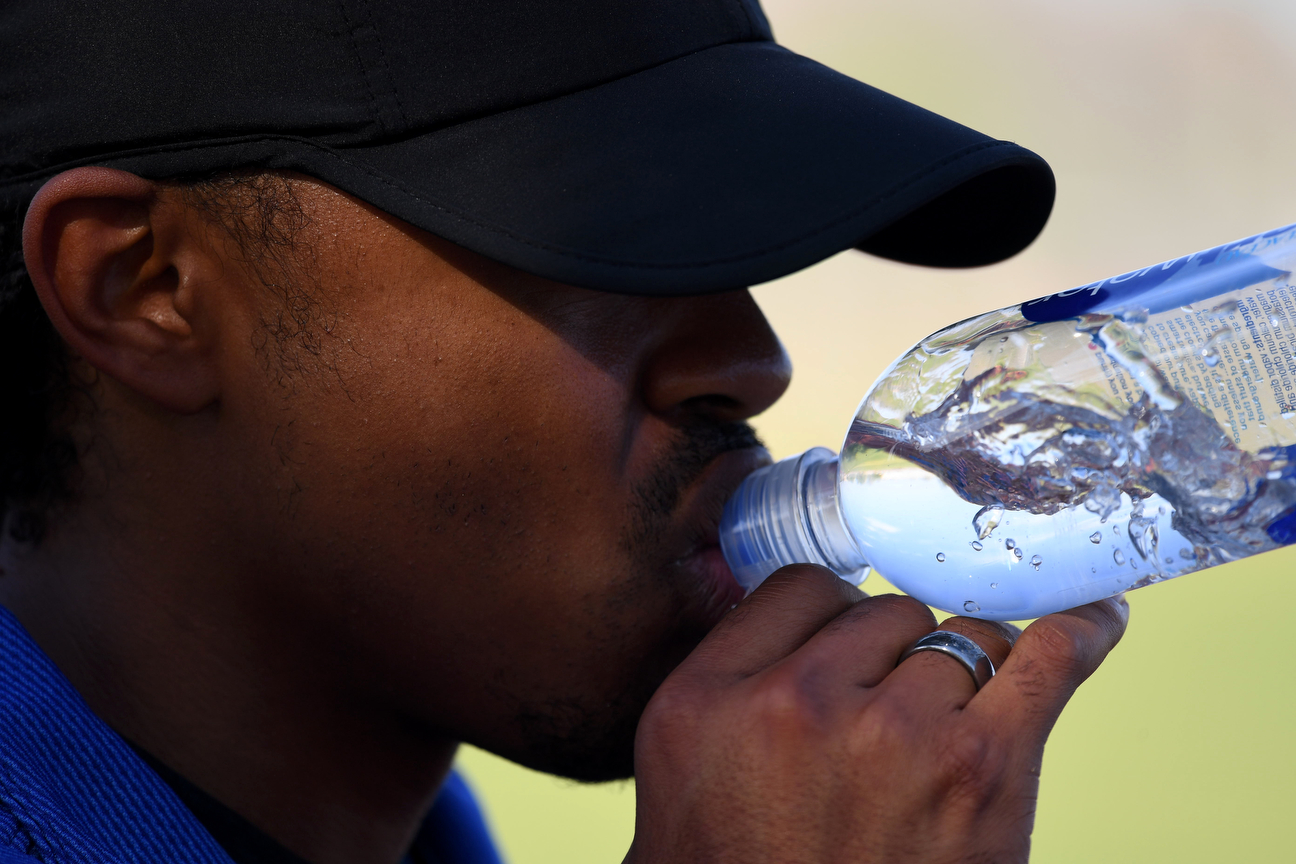 Hydration is always important for an athlete. Merritt, who lives and trains in Arizona, recognizes that it is a top priority. 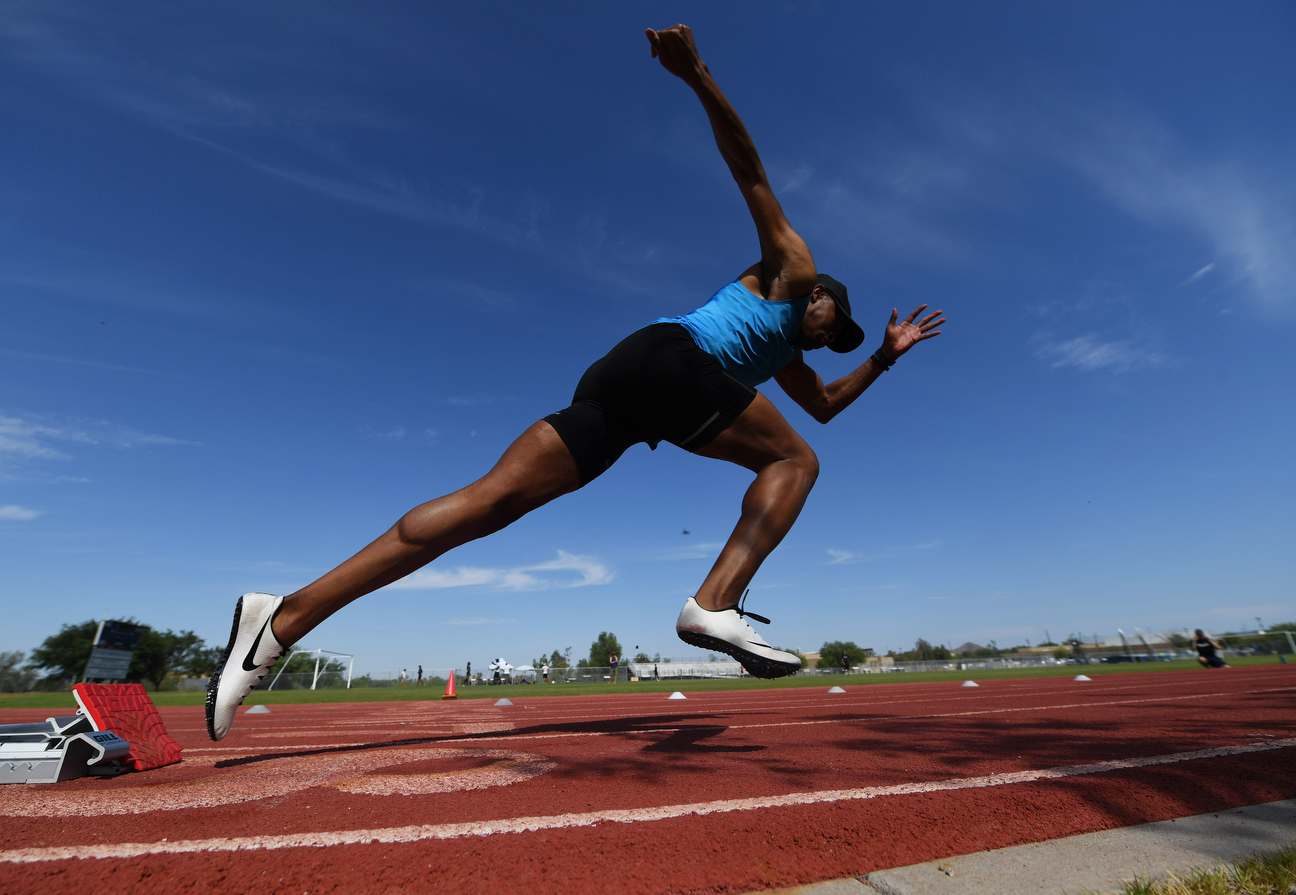 After his transplant, Merritt wanted to begin training as soon as possible. His doctors told him he had to wait eight weeks. He was able to get going in seven, then needed to wait several more weeks when his new kidney needed a second surgery in October. 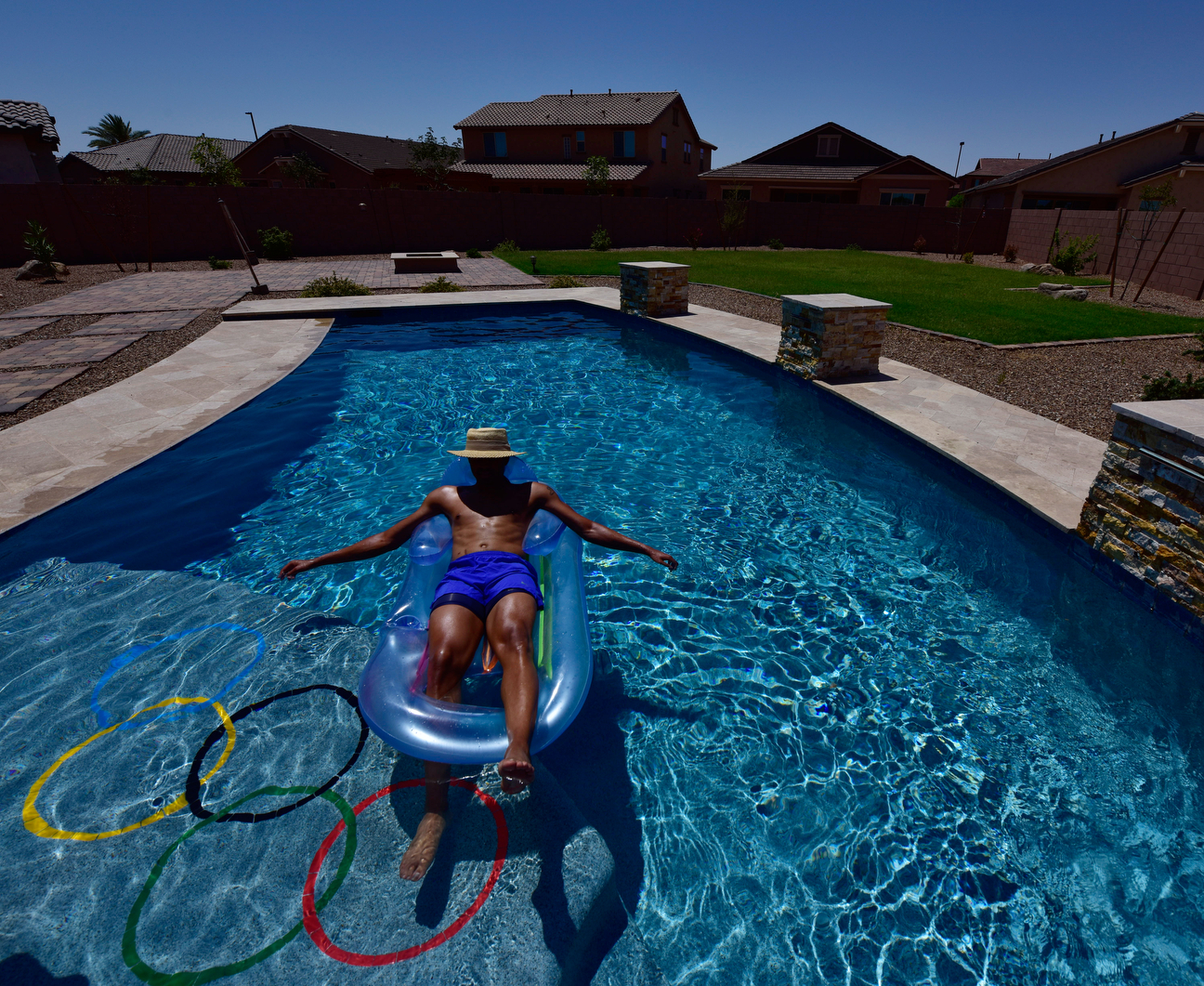 It's easy to see the Olympic rings painted on the bottom of Merritt's pool. Look a little more closely, and you might see the scar left on his abdomen from his kidney transplant. 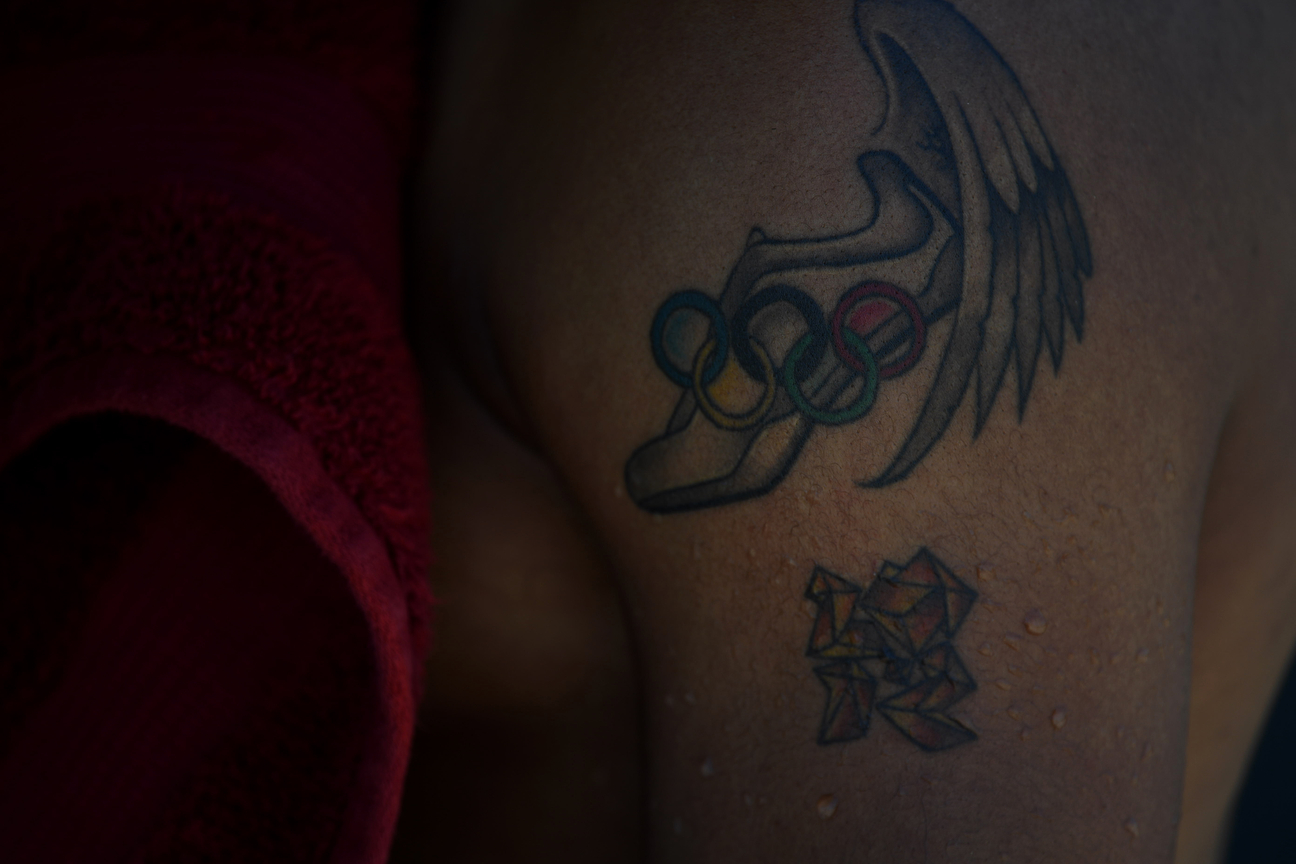 Merritt's tattoos pay tribute to his gold at the London Games in 2012 with a time of 12.92. A month later, he broke the world record in the 110 hurdles at 12.80, bettering the previous mark by seven-hundredths of a second. It was the largest drop in the record in 31 years. 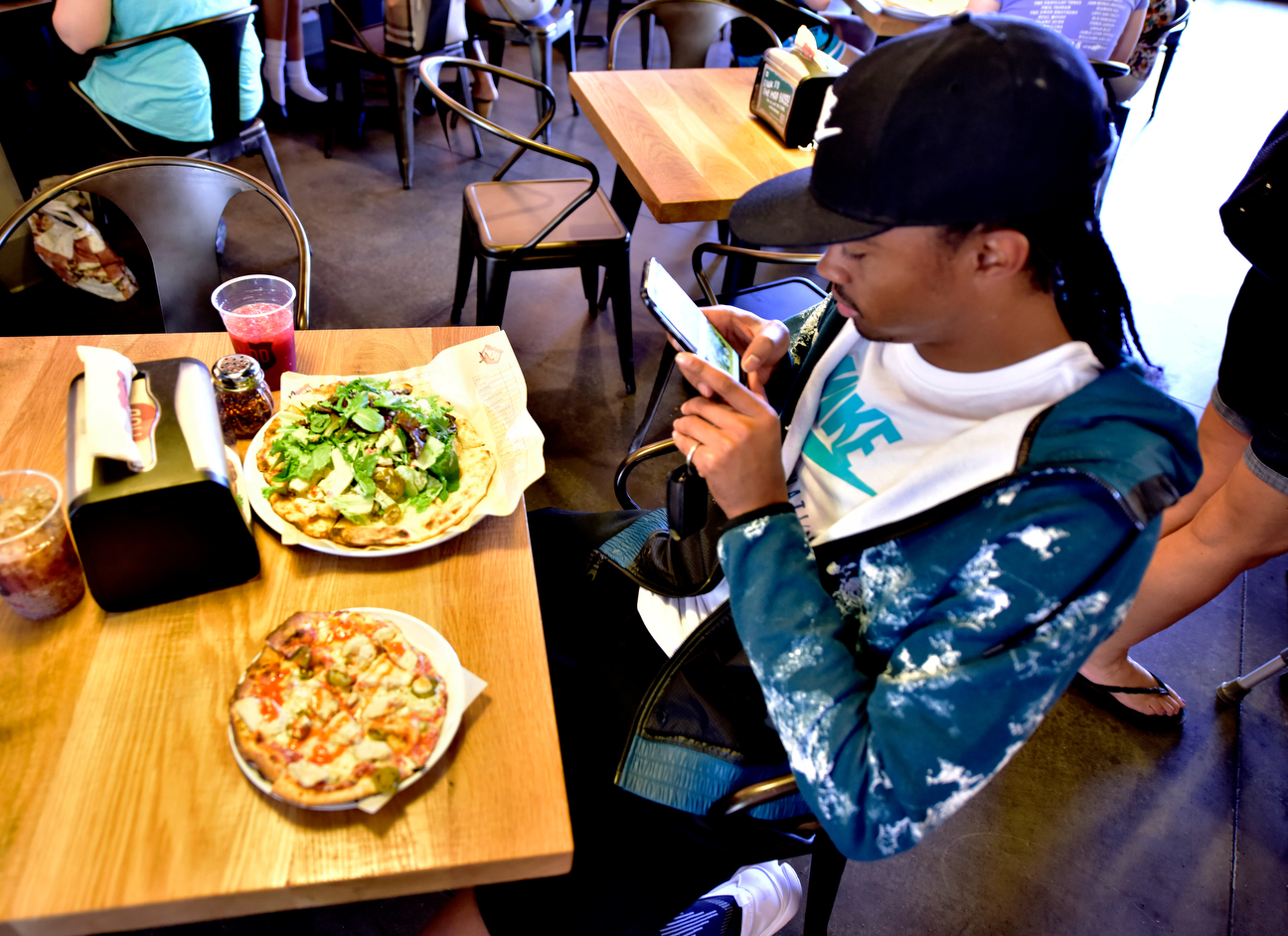 The kidney transplant doesn't stop Merritt from living life like everyone else -- after all, he competes like few others can. Pizza, anybody? 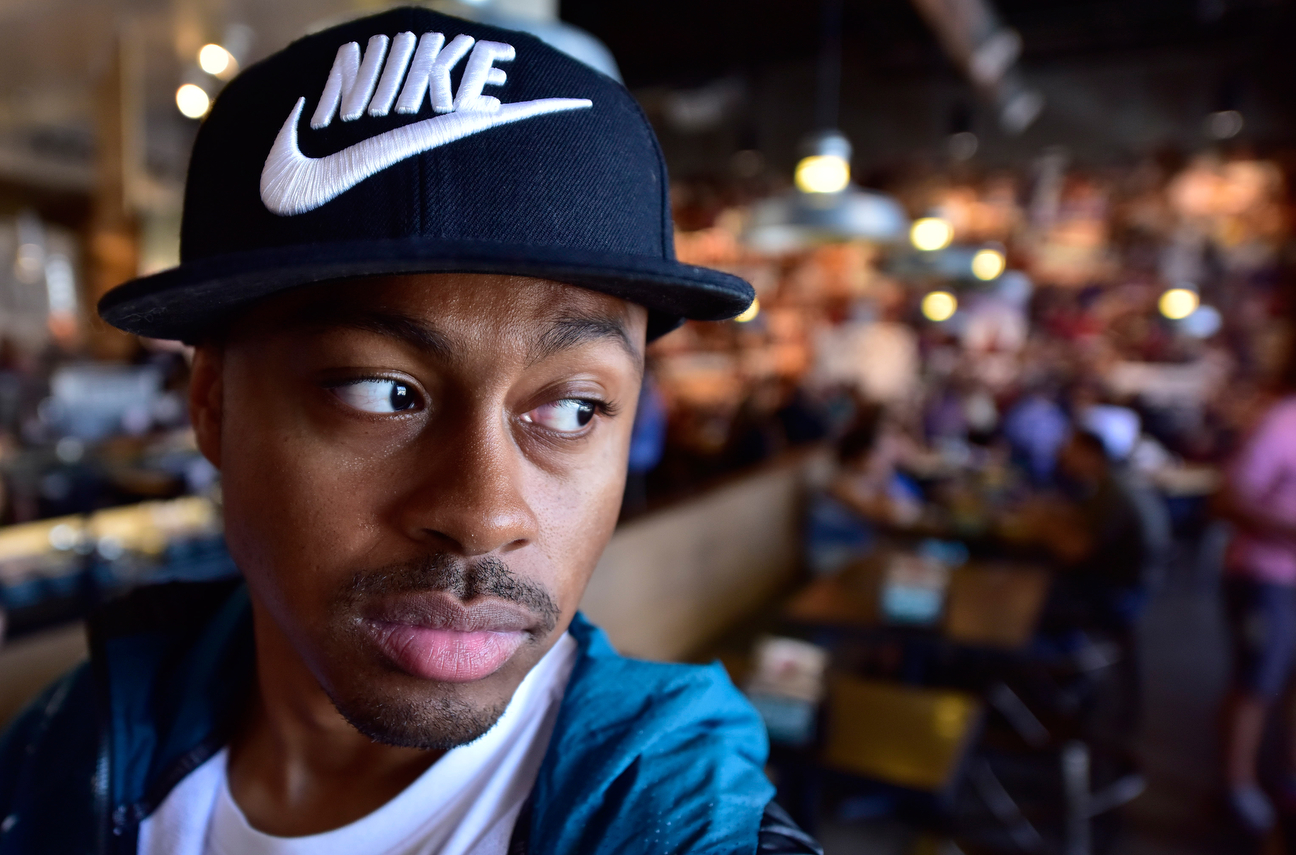 Almost four years after he broke the mark, Merritt remains the world-record holder. But he still has big hopes for the future: He wants to win the world championships. 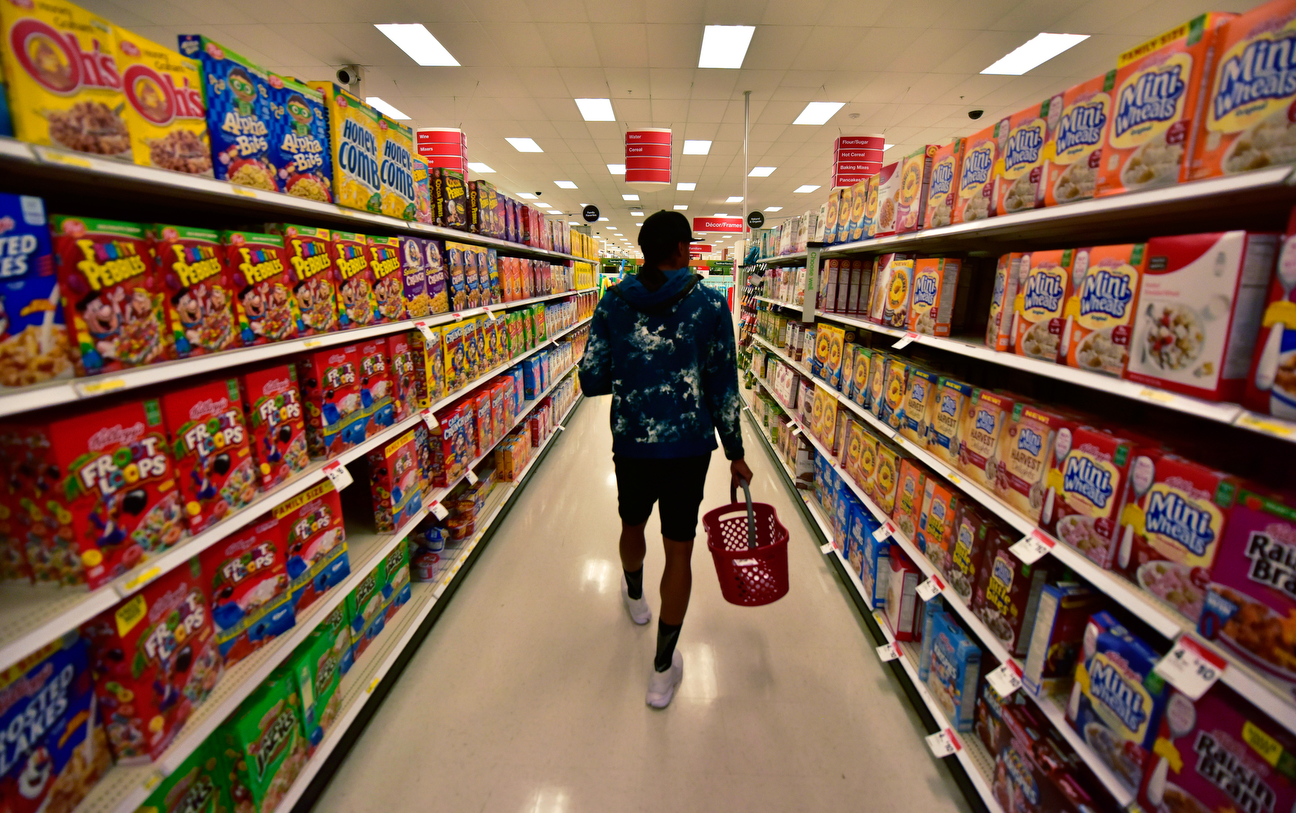 While shopping for groceries, Merritt is able to pick most food items that he wants. One thing he can't eat, however, is pomegranates. 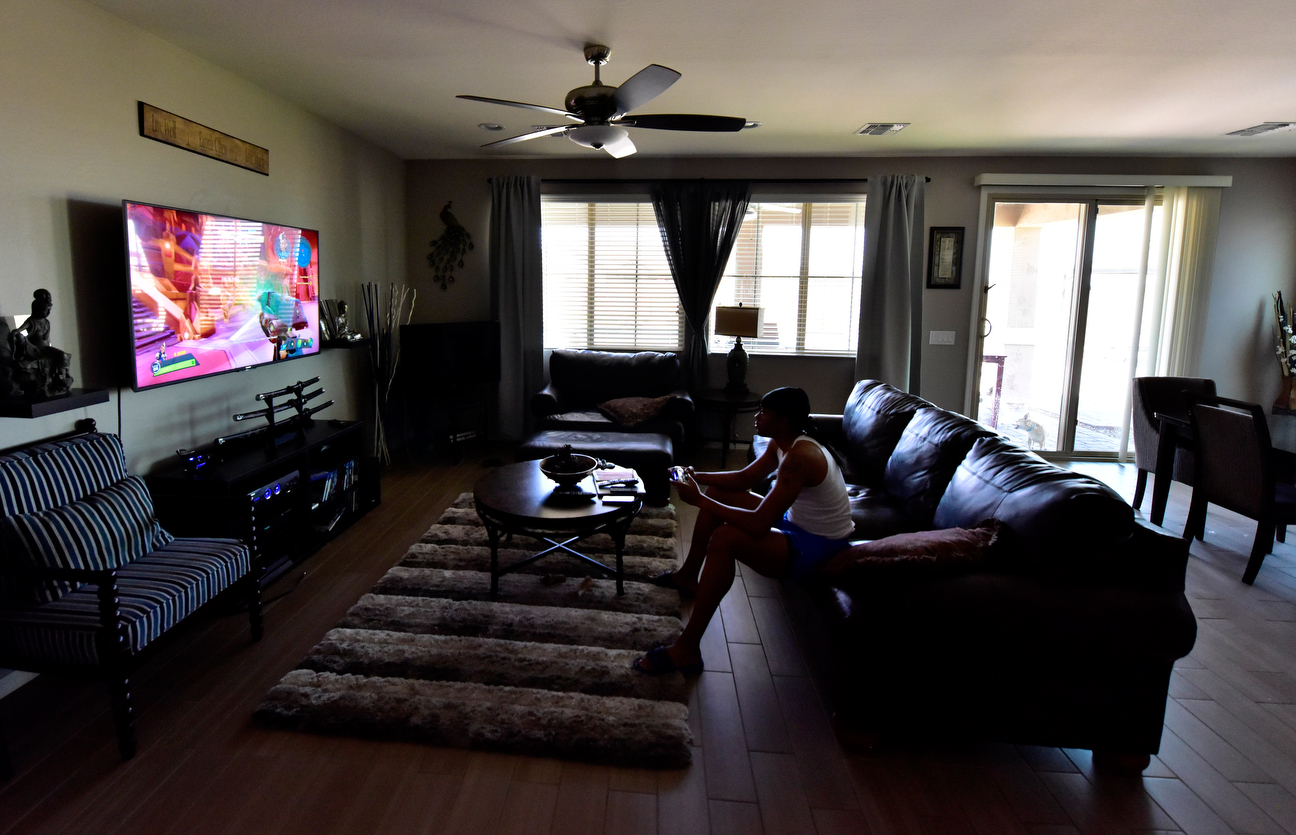 Training for the Olympic trials in any sport can be exhausting. Fortunately, Merritt is able to relax in his home afterward. He also binge-watched shows while recovering from his kidney issues. Perhaps Netflix should make a series about him. 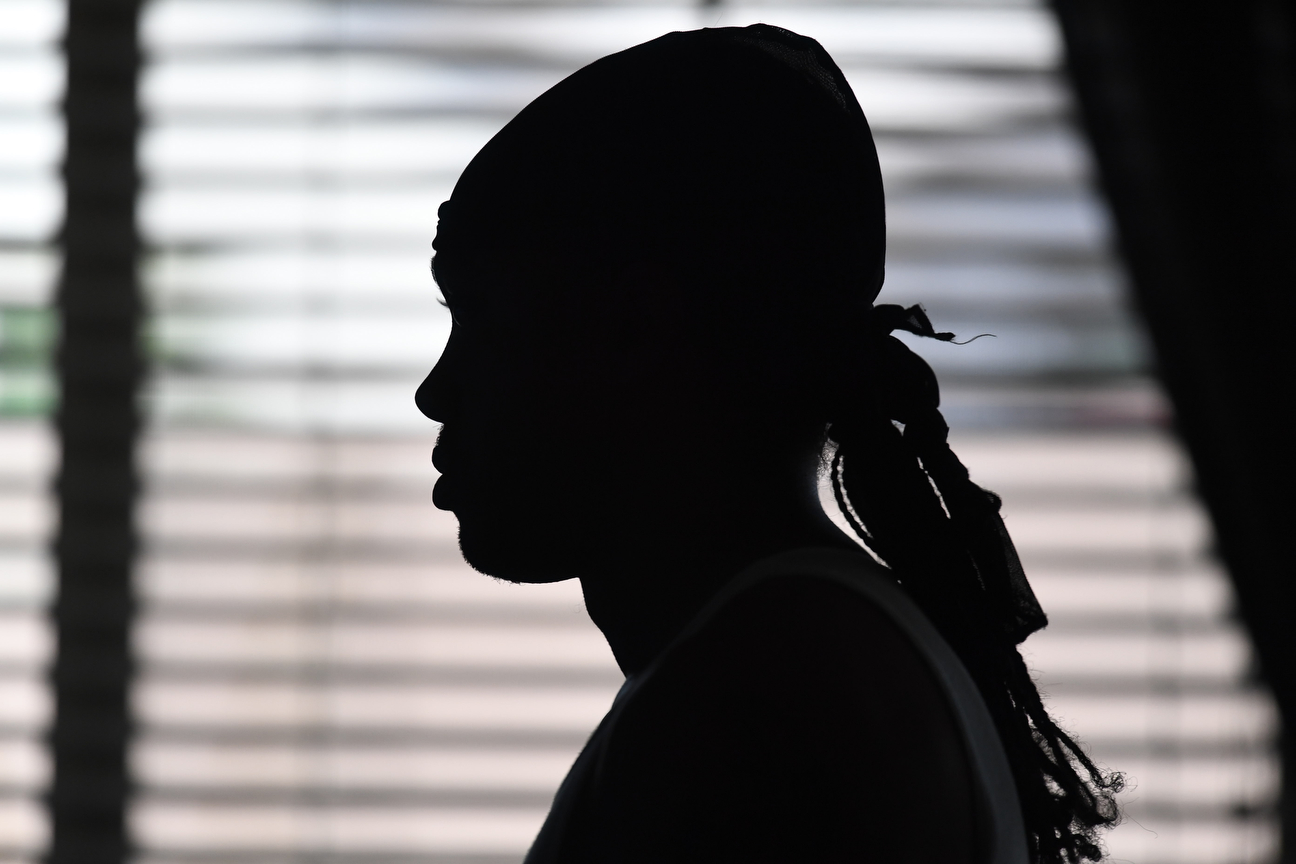 After a long postsurgical layoff, Merritt was able to get back into training. He wasn't in top shape and ran a shorter schedule than normal, but he went to Eugene determined to reach the Rio Games. 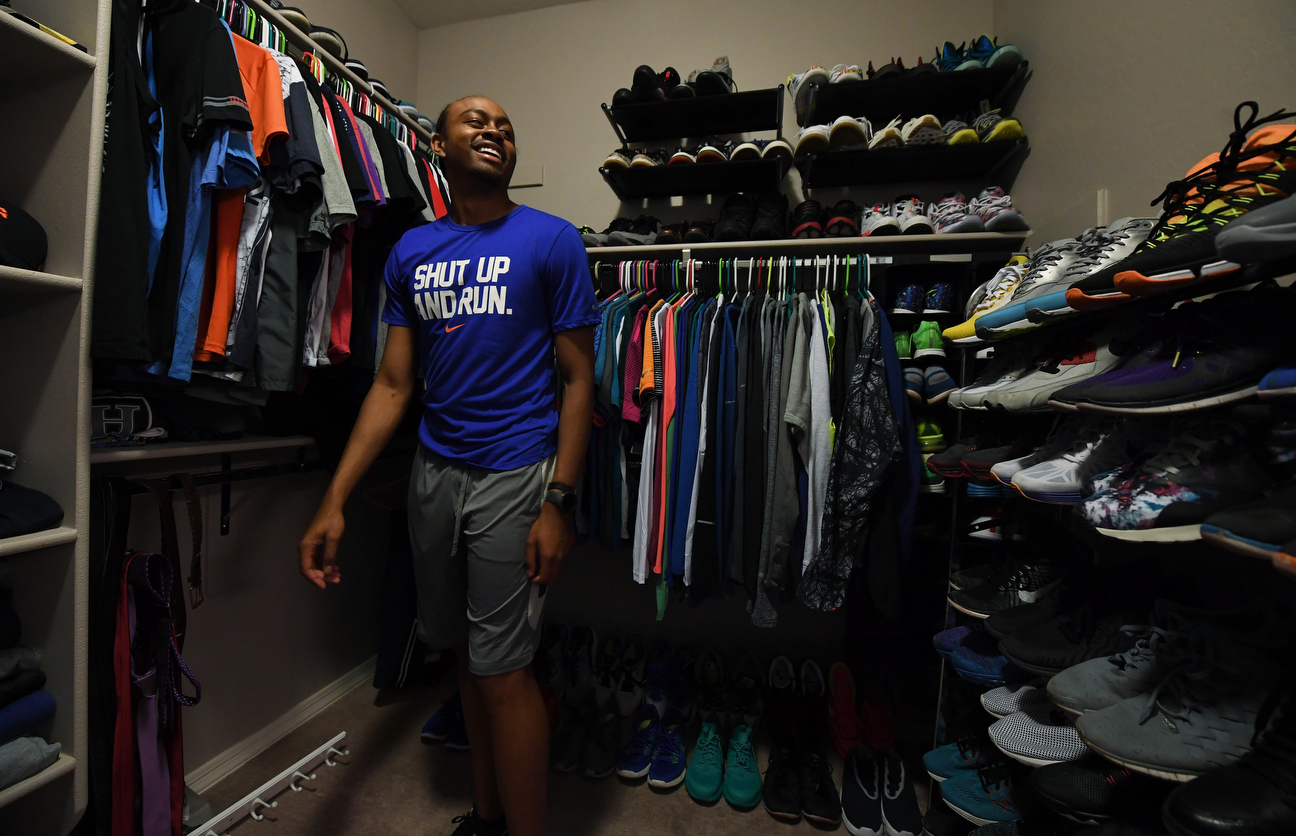 It's not surprising that someone who is a gold-medal hurdler would have a lot of shoes, and Merritt keeps his gear nicely organized. 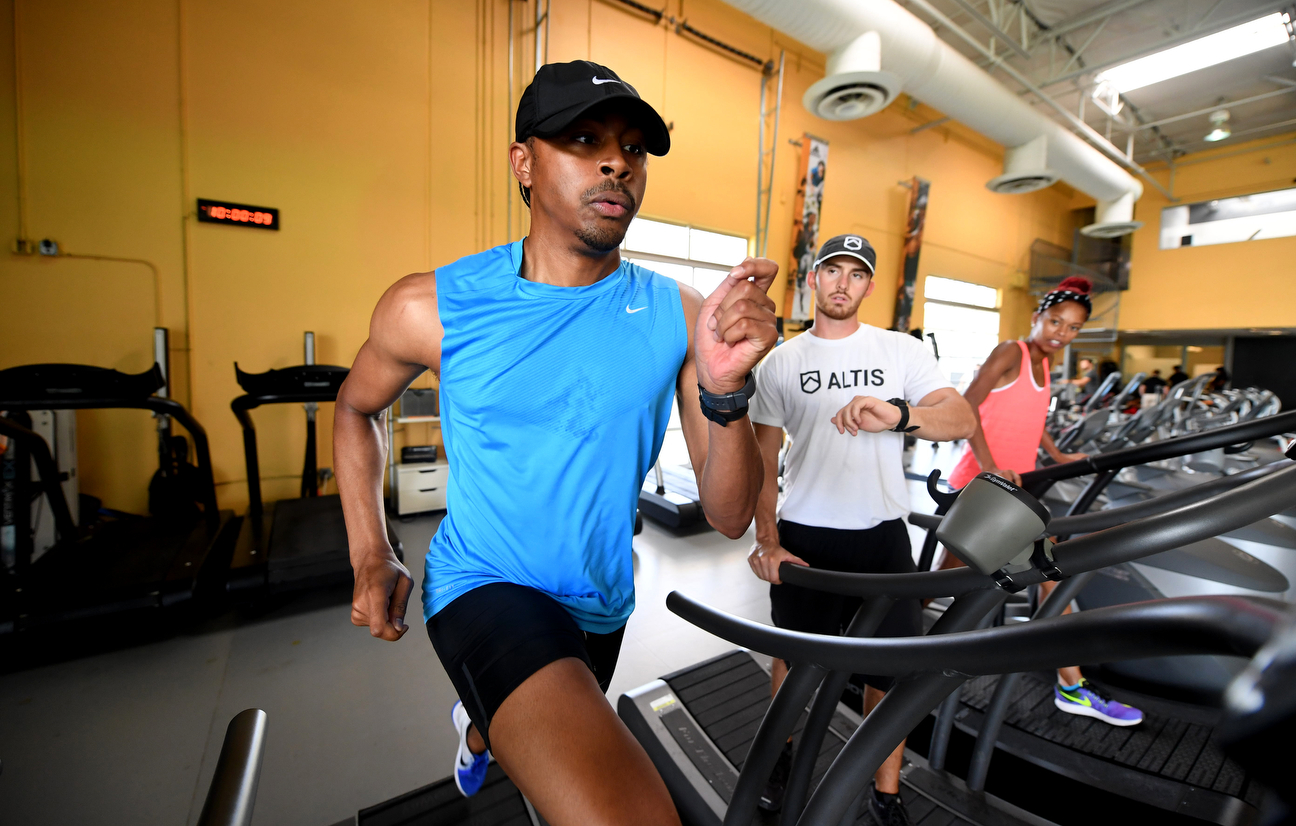 With Jason Hettler timing him and Olympian Muna Lee watching from the side, Merritt trains on a treadmill. Merritt always gives it his all, even when his kidney only could give him 10 percent. 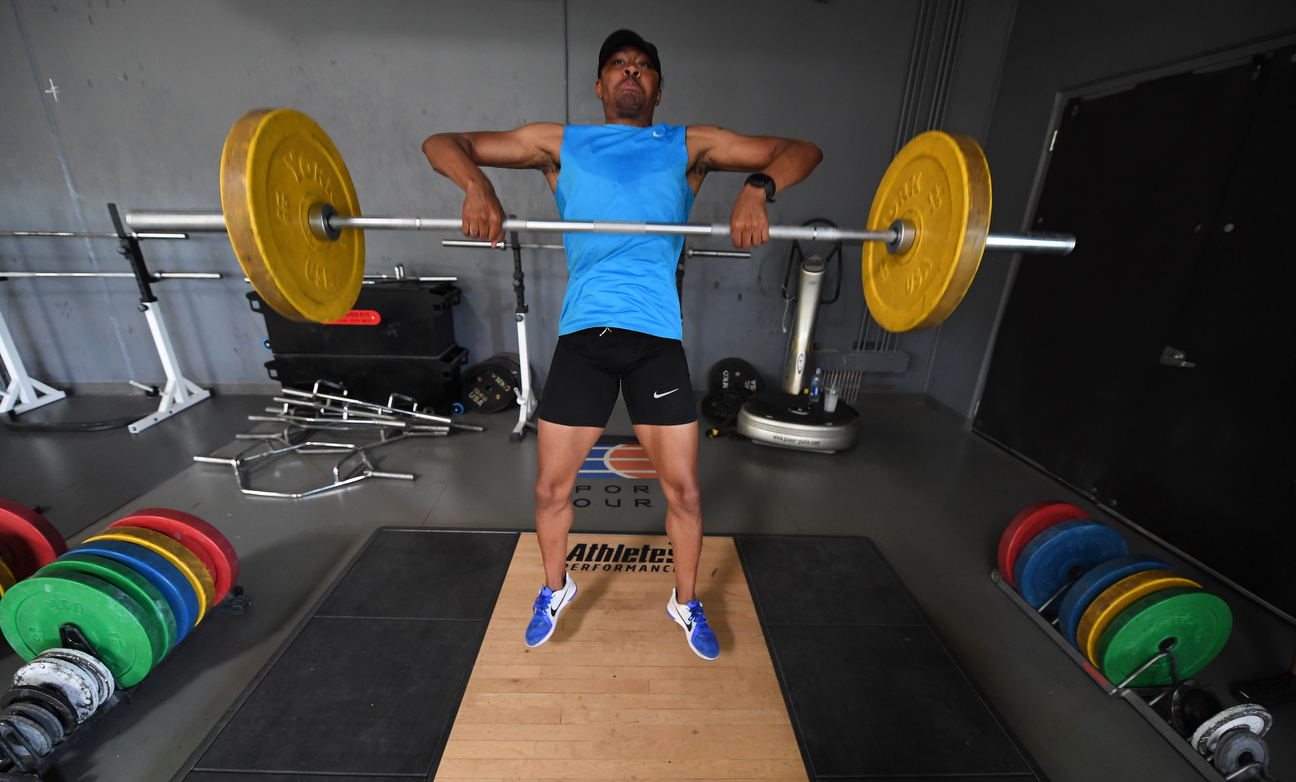 Running isn't enough for a world-class hurdler -- you must also lift weights to improve your strength. Given all that he has gone through, Merritt clearly is even stronger in his attitude and approach to life. 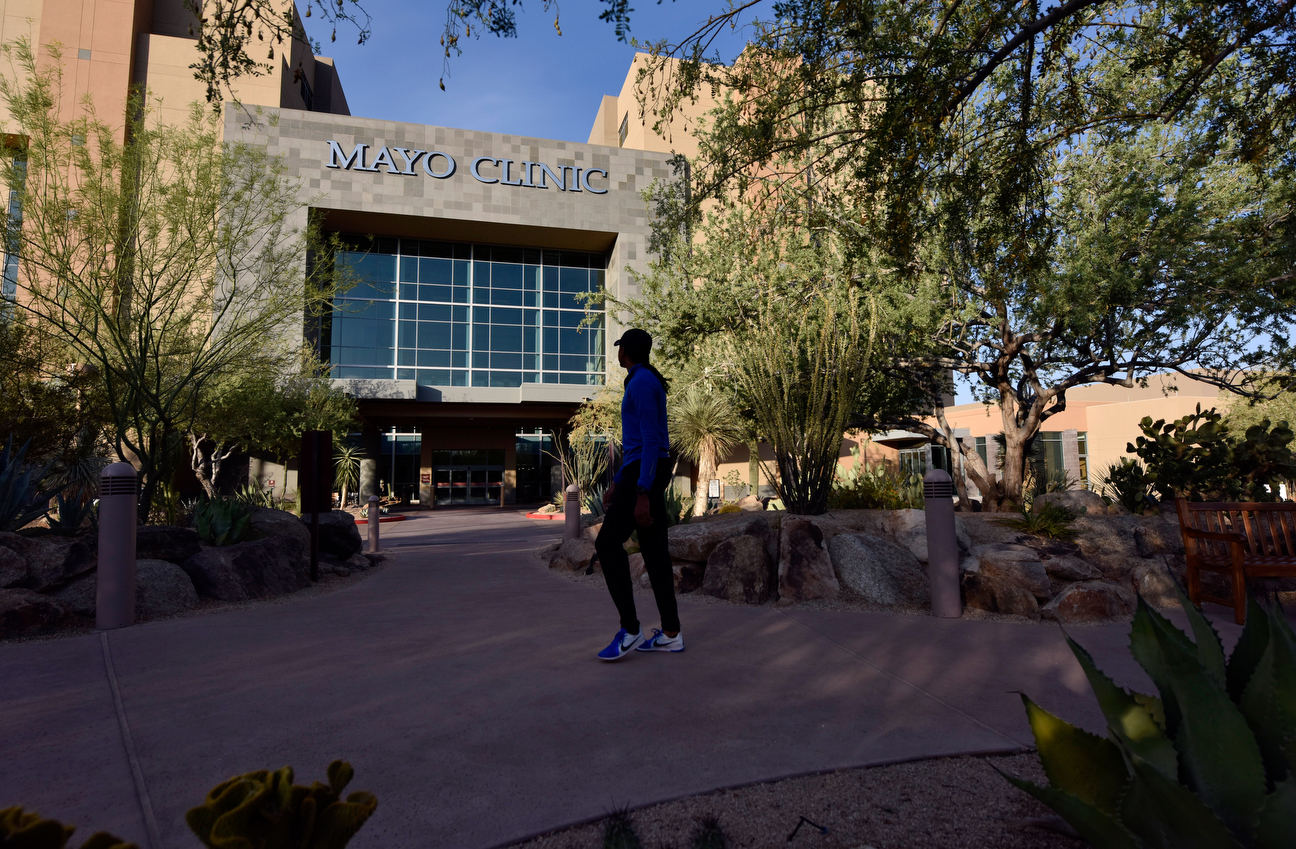 Merritt walks into the Mayo Clinic in Scottsdale, Arizona, where he received his kidney transplant. Dr. Les Thomas, who treated Merritt, is so impressed by him that he traveled to Eugene to see him compete. 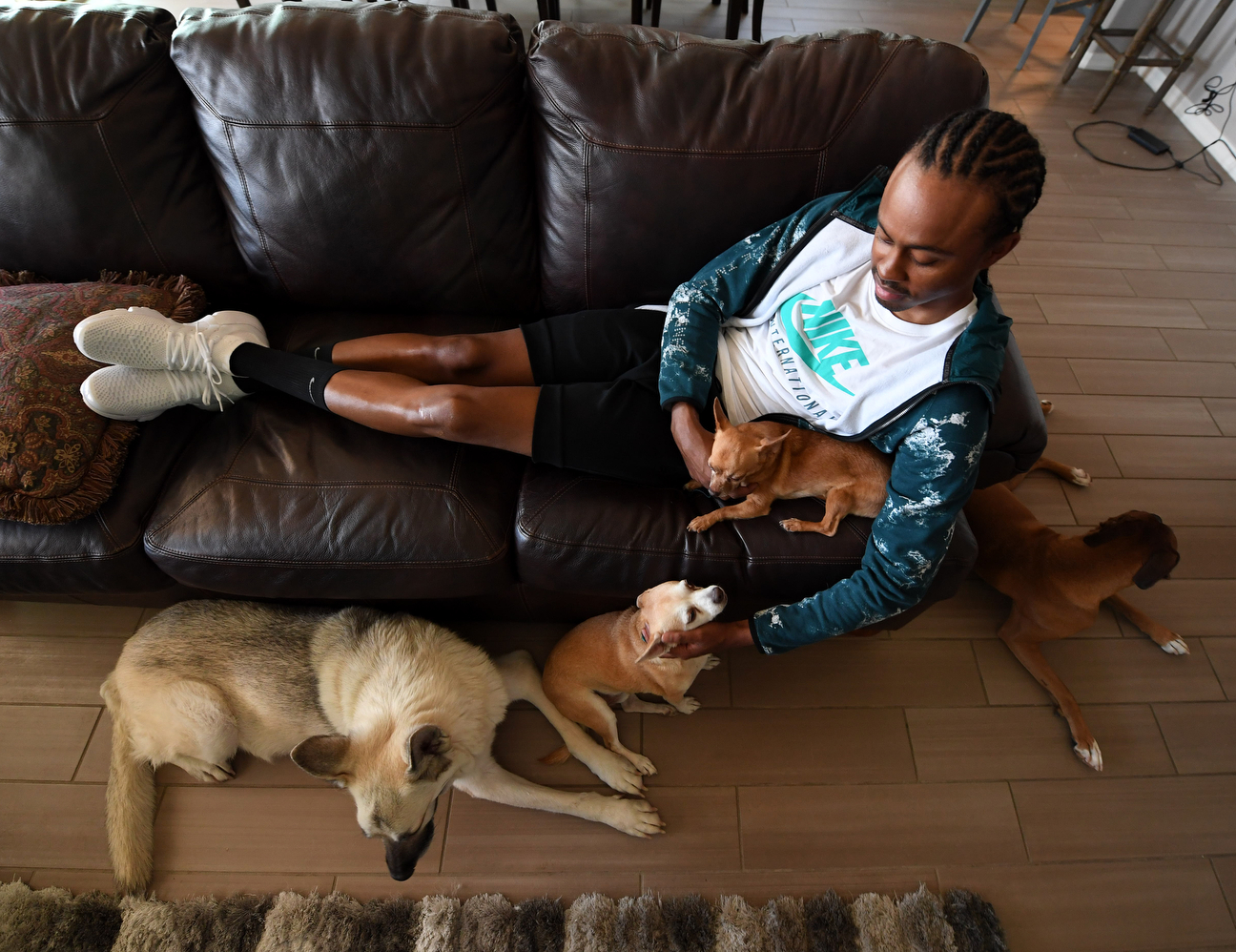 Here's one more demand required by the kidney transplant: Because of his immune system issues, Merritt can't clean up after his four dogs. He hired a helper for that dirty work. 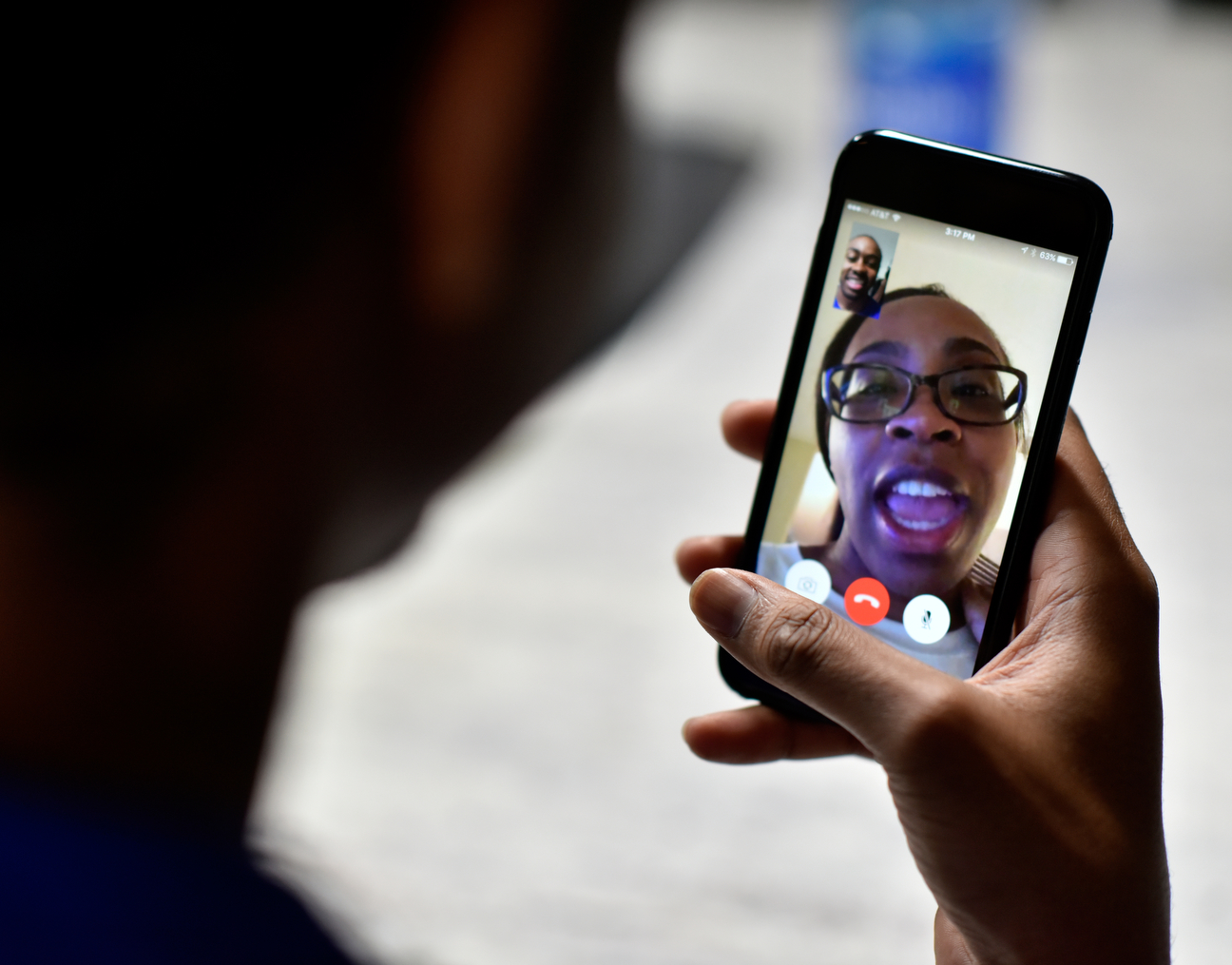 Merritt calls his sister LaToya Hubbard every day. And why wouldn't he? She's the one who donated her kidney to save him. "She gave me the gift of life,'' he says.' 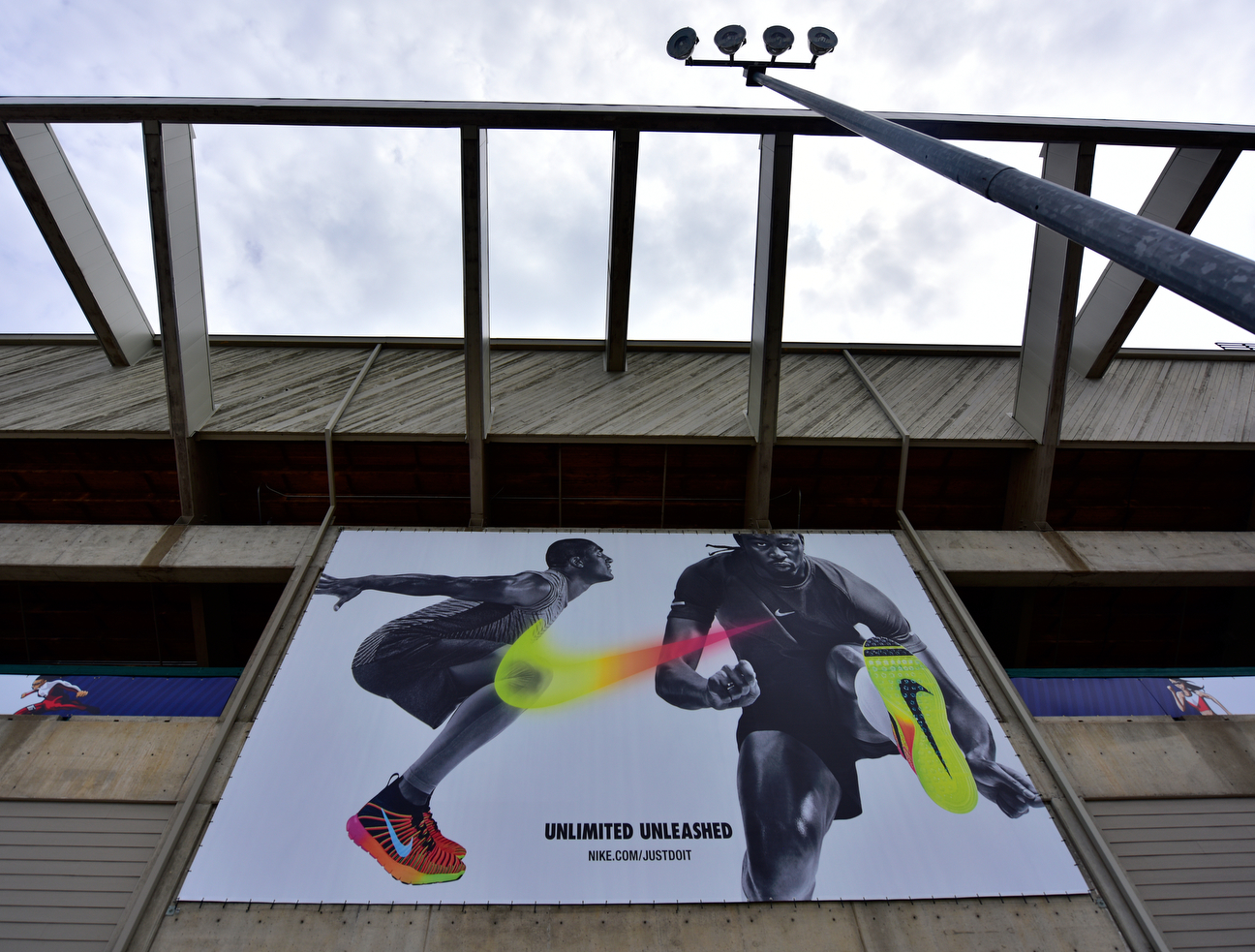 This Nike ad at Hayward Field says Merritt is "Unlimited'' and "Unleashed.'' It should also say "Undaunted by Anything. And we mean Anything!'' 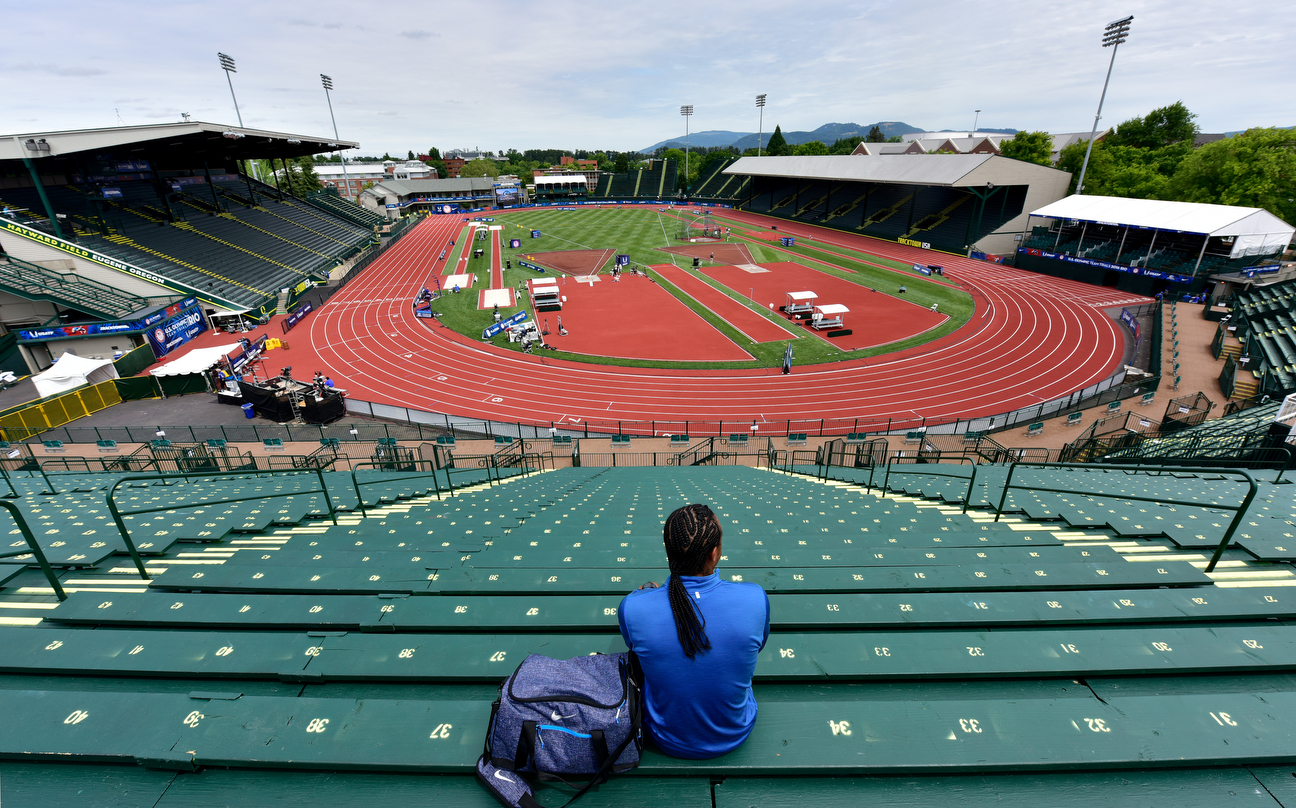 Merritt sits at Hayward Field in Eugene while Kelly Clarkson's song "Stronger'' plays over the speakers. "What doesn't kill you makes you stronger,'' the lyrics say. Those words could have been written about Merritt. 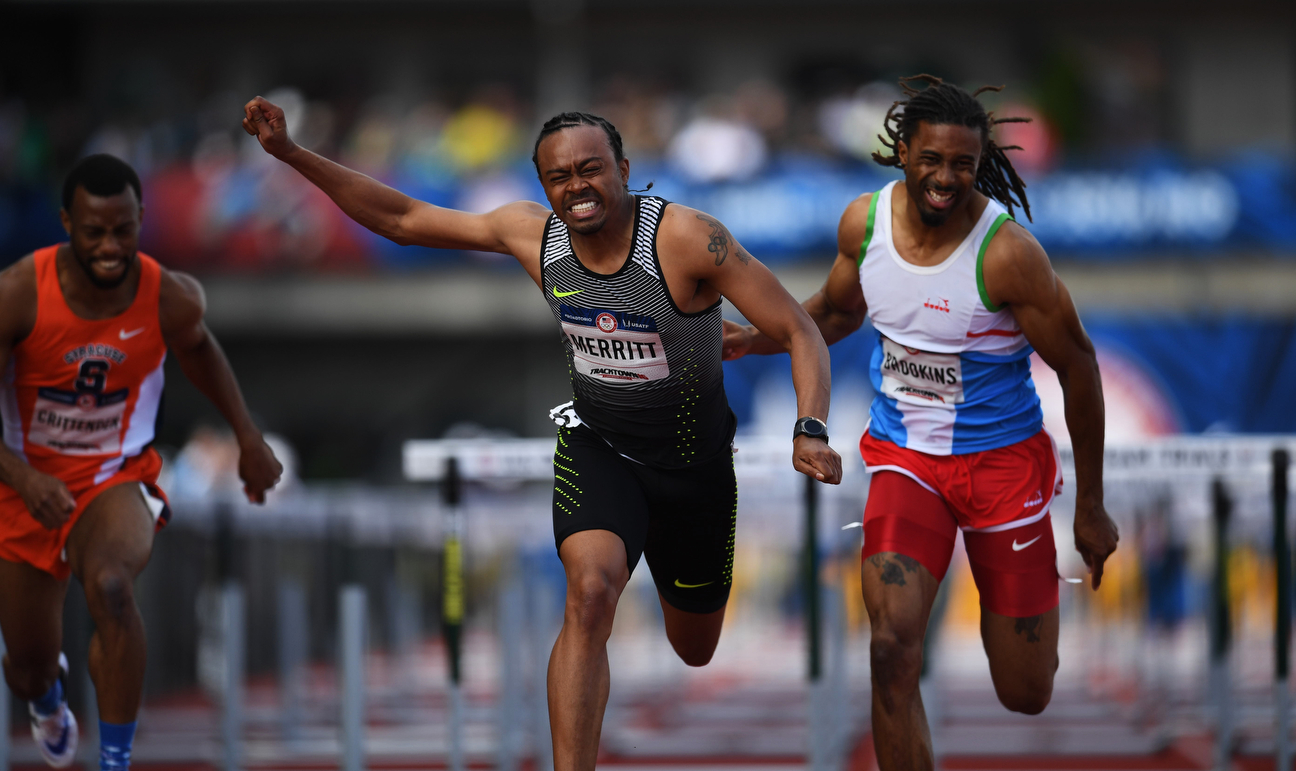 Although he clipped the hurdles four times (which he usually does not do), Merritt ran the sixth-fastest time in the first round at the U.S. Olympic trials, good enough to advance to the semifinals. 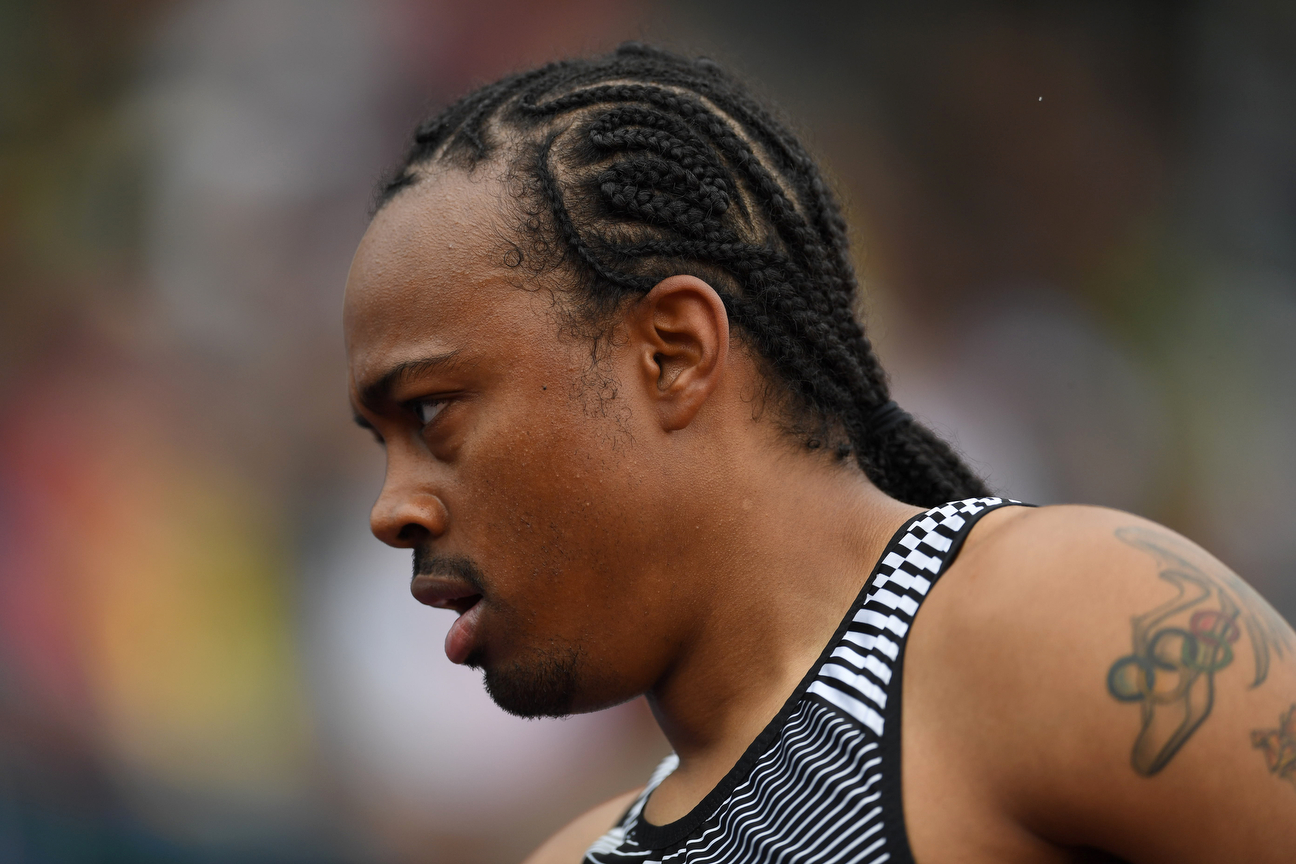 Merritt wasn't thrilled with his time of 13.64, more than a half-second off his world-record time, but he was happy to advance and is looking to do "something magical'' in ensuing rounds. But what could be more magical than what he has already done? 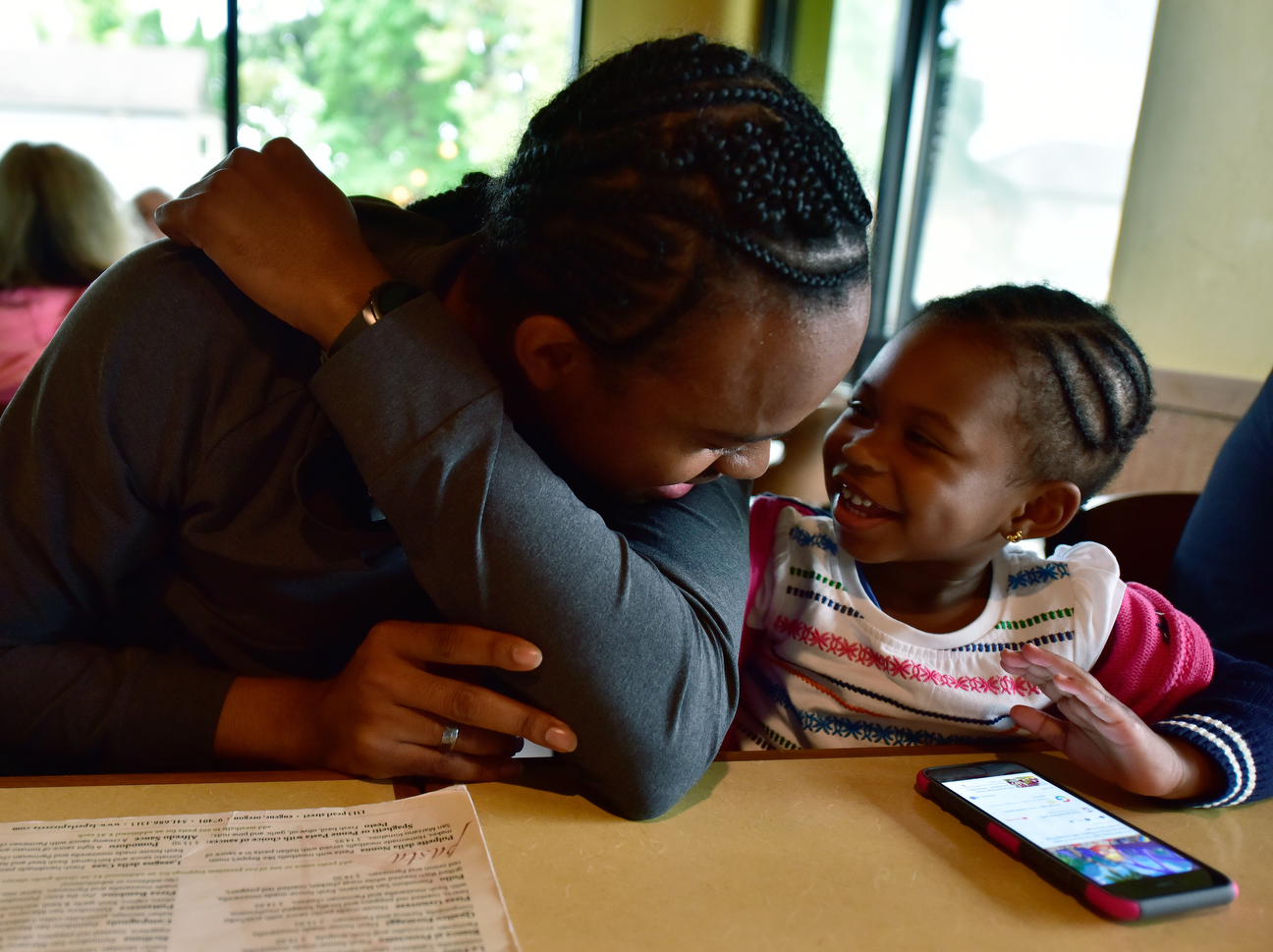 After the preliminaries, Merritt was somewhat fatigued. But dinner and meeting up with his 22-month-old niece, Lela, and his sister LaToya helped re-energize him -- just as his story should re-energize you. 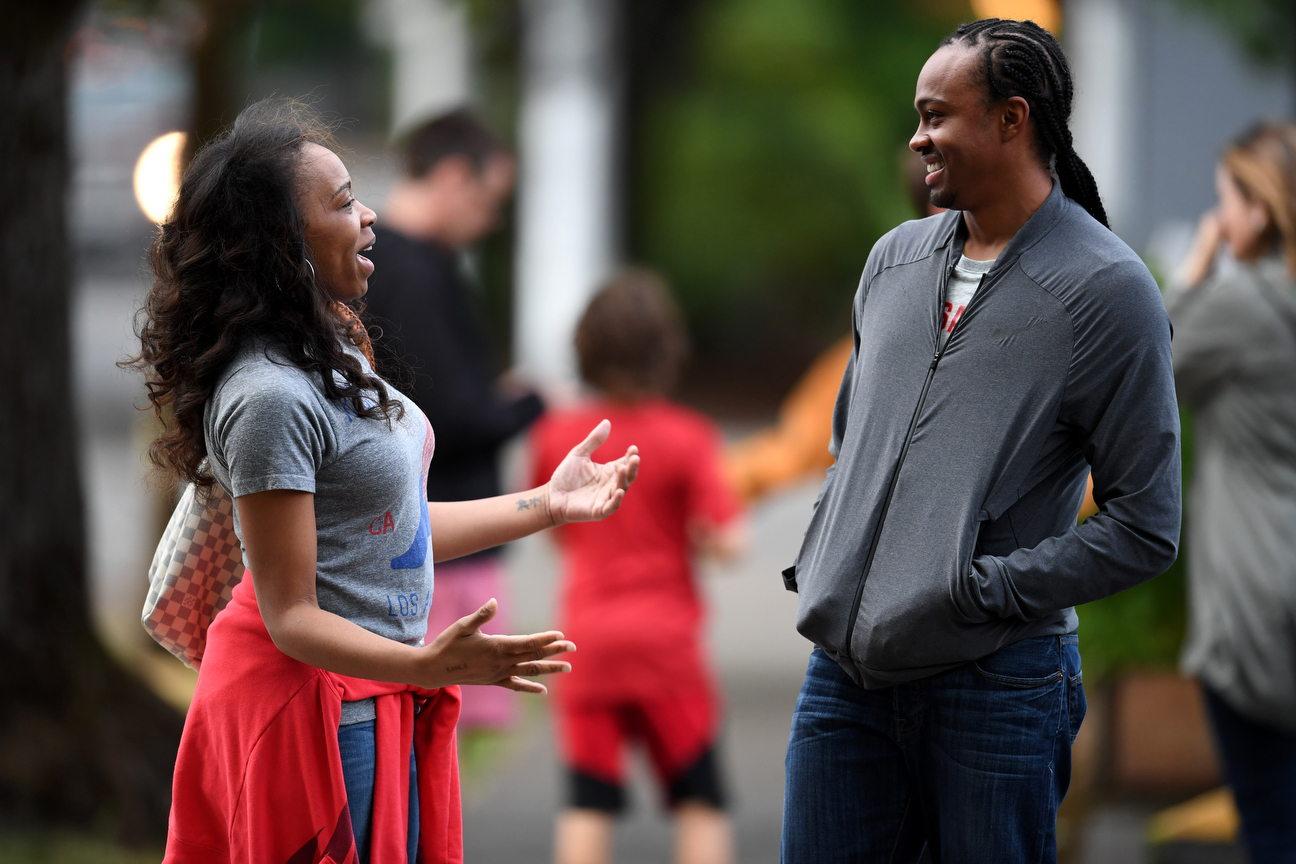 Asked whether he would give LaToya his gold medal if he won again in Rio, Merritt said she didn't want it. She only wanted people to know she donated her kidney. The normal waiting list for a kidney can be years; some patients die before they can get one. 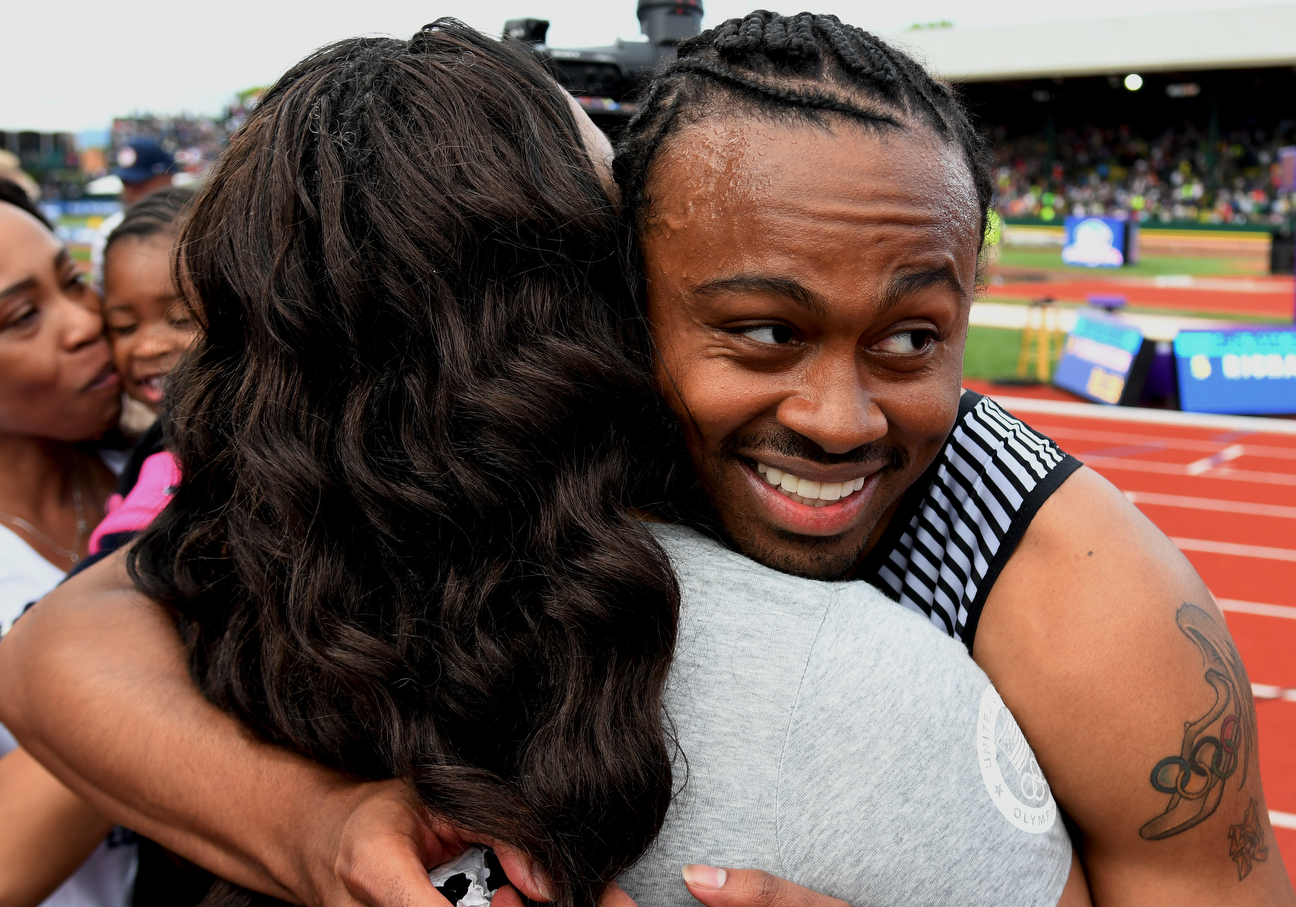 After advancing to the 110 final, Merritt hugs his mother, Linda Hubbard. She not only raised him, she helped nurse him back to health following his kidney transplant. 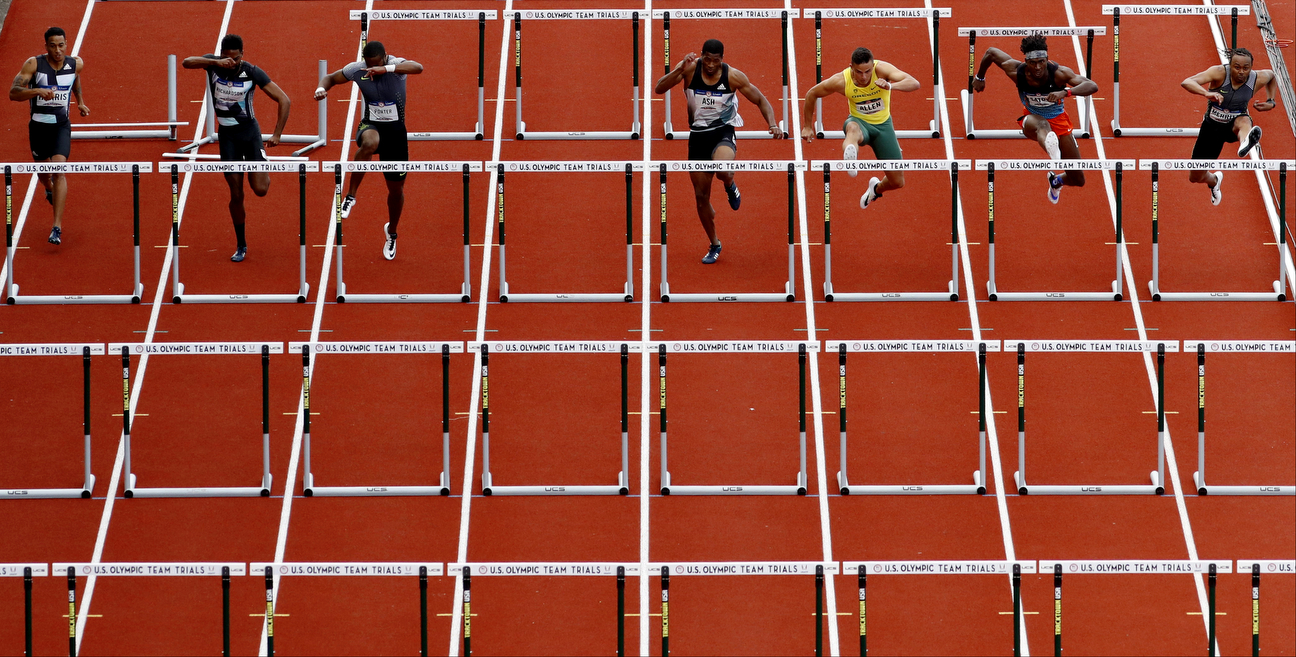 Merritt had the lead in the 110 final with just three hurdles left to the finish line. 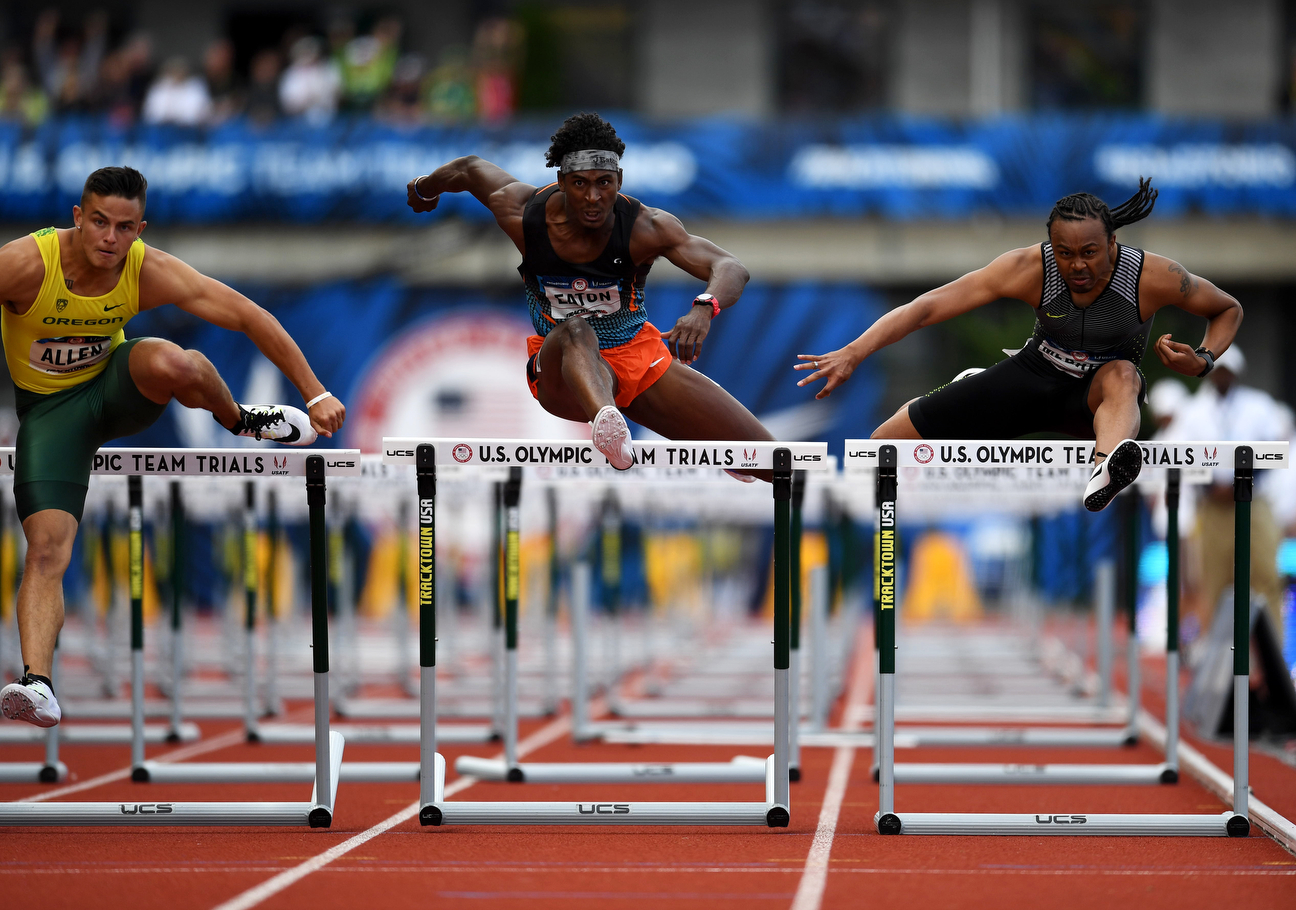 Leaping over the last hurdle, Merritt was behind Devon Allen and extremely close in the race to be among the next two finishers who would qualify for the Olympic team. The finish was so close that determining those qualifiers took an agonizing amount of time. 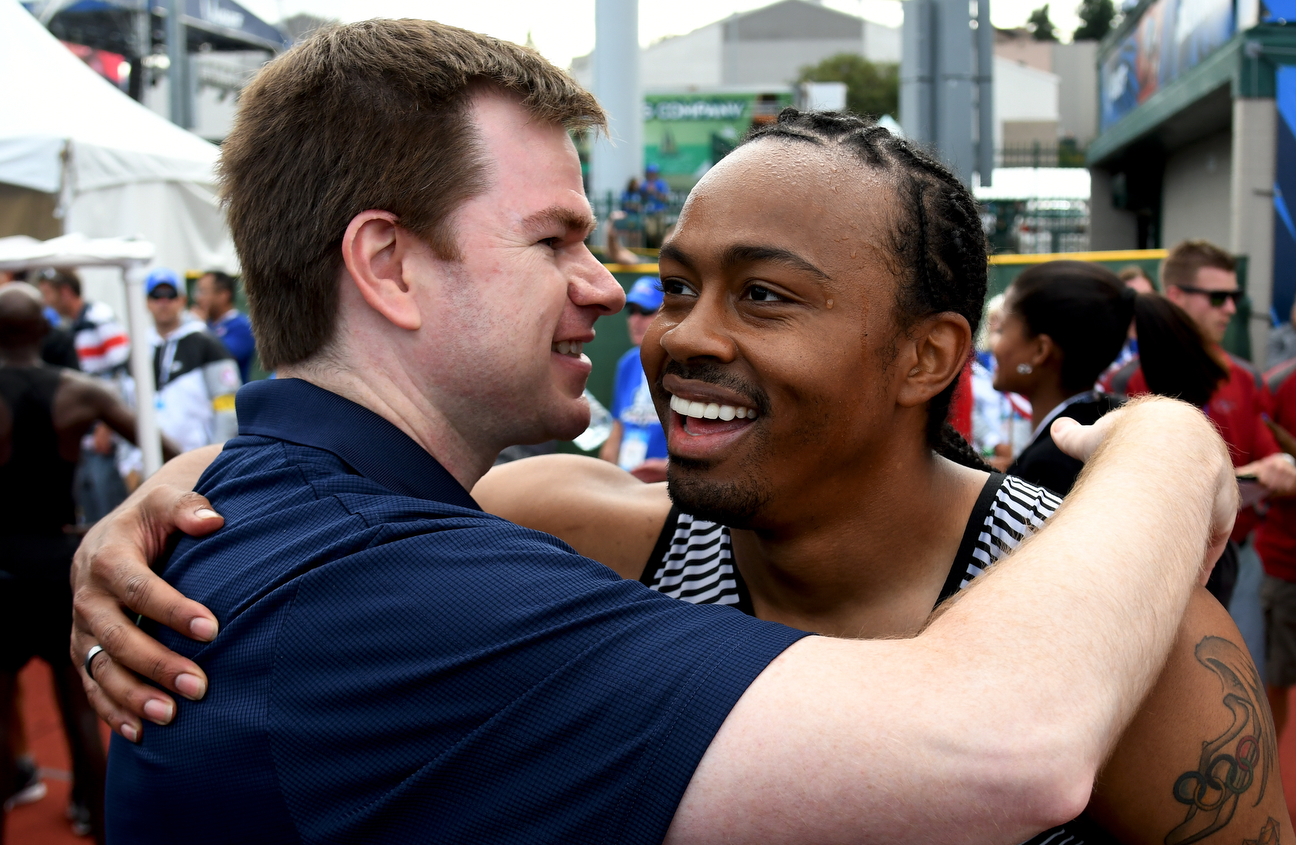 In appreciation for his work, Merritt invited his kidney specialist, Dr. Les Thomas, to the trials. Regardless of what his finish would be, Thomas said Merritt is an inspiration. What he's done "is a way to say no matter how dark it may be, there is always a brighter spot.'' 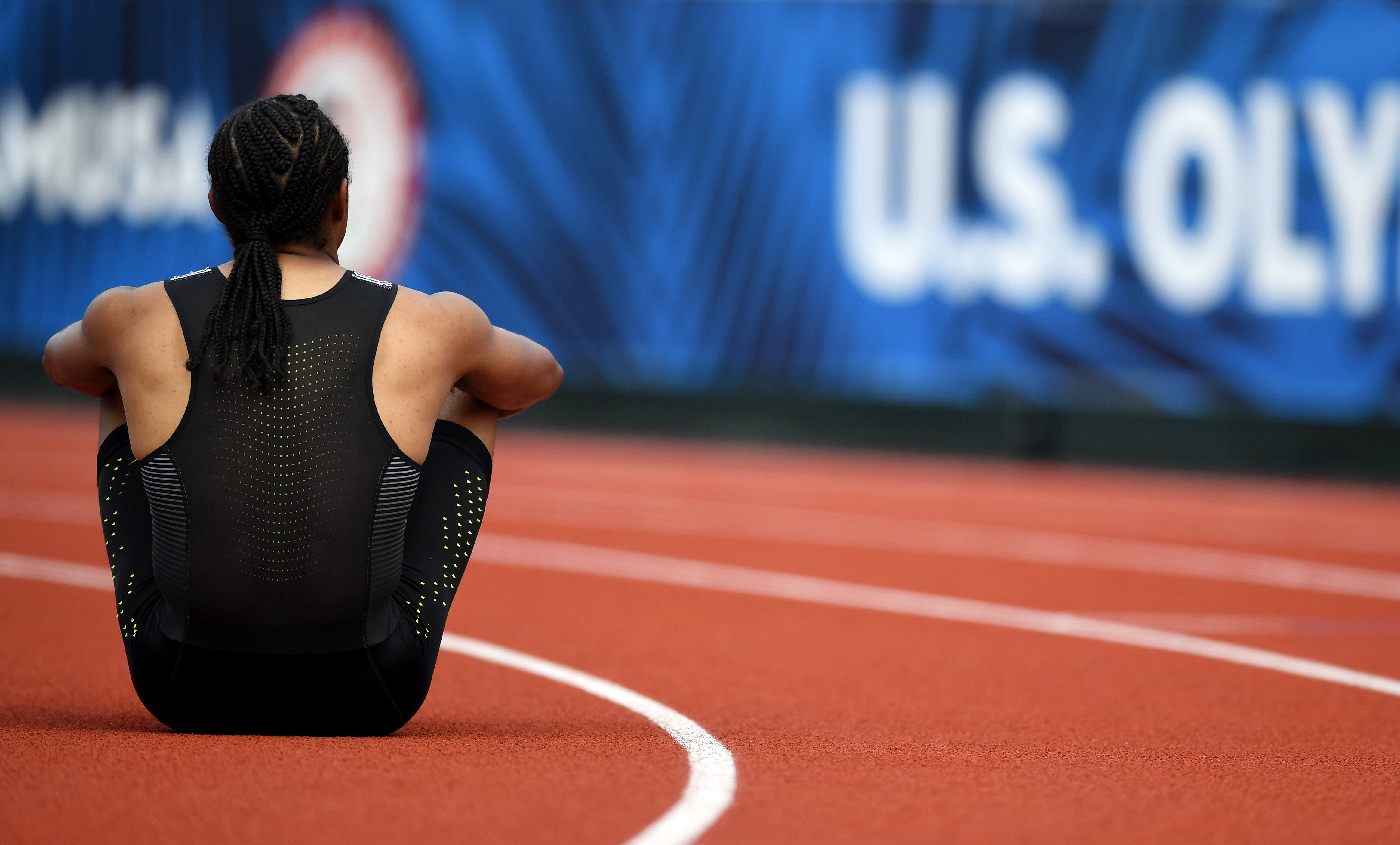 Merritt just missed the Olympic team, finishing fourth by 1/100th of a second. Still, he said, "People should know that no matter what you're going through in life, if you keep your mind focused on something you want to accomplish, anything is possible.''