he sun is just rising over the railroad tracks when Frank Rodriguez unlocks the squeaky front door to his gym.

Frank's Boxing Gym is a staple here in Grand Island, Nebraska, and the owner does just about everything to keep its doors -- even if they're squeaky --open. Rodriguez cuts the grass, cleans the floors, trains the boxers and also runs a lawn service and works multiple odds jobs to scrape together enough money to keep the gym going.

Just the fact that Rodriguez has the strength to open the front door is a miracle unto itself.

Rodriguez was born prematurely, weighing less than 4 pounds. His crib wasn't finished yet, so his parents put him to bed in a dresser drawer. No baby clothes fit Baby Frank, so his mom dressed him in doll clothes.

Rodriguez eventually grew out of the doll clothes and dresser drawer, but he was always the smallest kid in school and became a teasing target for other kids. But then his dad, Frank Sr., decided to build a gym in their basement, and his son soon became addicted to training. Frank Sr. used to follow his son in a truck as he ran along the dusty central Nebraska roads that cut through corn fields and cow pastures. It wasn't long before the bullies figured out thaty messing with Frank was not a good idea anymore.

Fast forward to six years ago, when Frank was diagnosed with lymphoma that had spread to 70 percent of his body. His doctor placed him on the most aggressive possible treatment, but warned that Frank had only a few weeks to live.

Weeks, then months, passed. Against all odds, the treatment had worked -- so well, in fact, that Frank was eventually declared to be cancer free.

The treatment had ravaged his strong body, and just when he thought he'd turned the corner on rebuilding his physical condition, more bad news: He was diagnosed with pancreatic cancer.

Doctors were able to remove the cancer, but only by removing part of his pancreas, small intestine and gall bladder.

The surgery was 11 hours long. When Frank awoke, he vowed to come back stronger than ever. 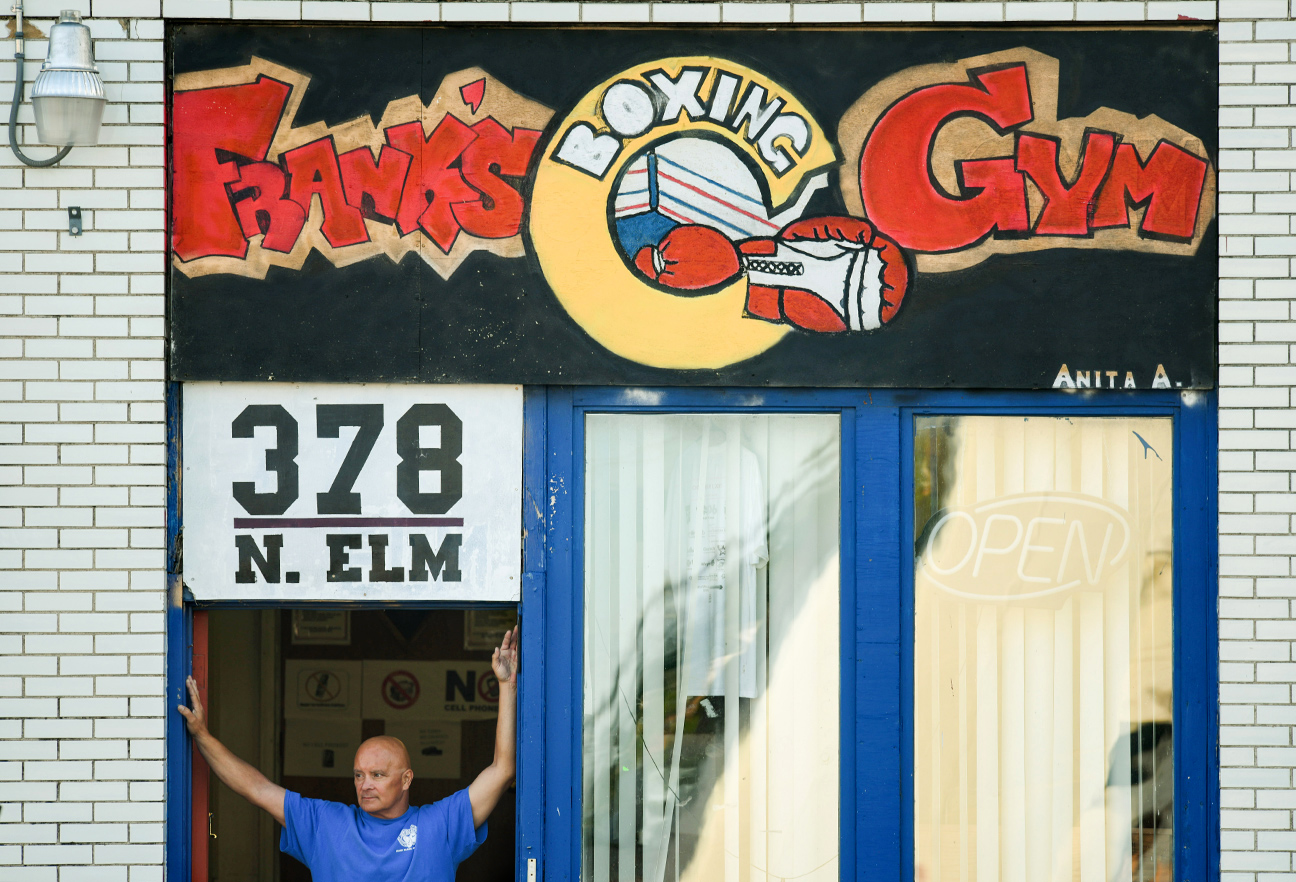 Frank built his gym on the bottom floor of an old apartment building that he purchased nearly 20 years ago. It took him three years to clear out the trash and get the gym ready for use. 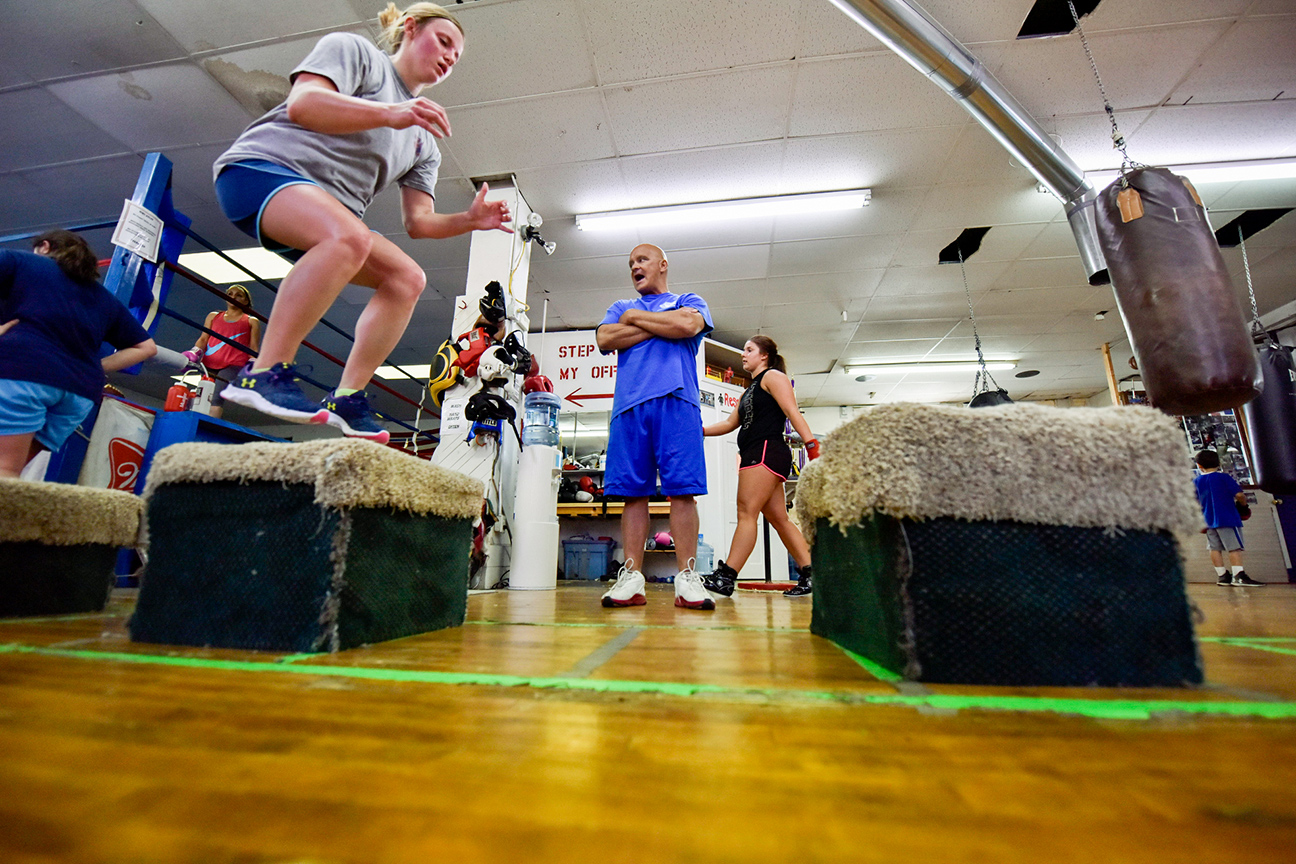 Frank gives instructions to a class of women. The class is every Tuesday and Thursday. Many of the women come up from Hastings, which is 30 miles south of Grand Island, to work out with Frank. 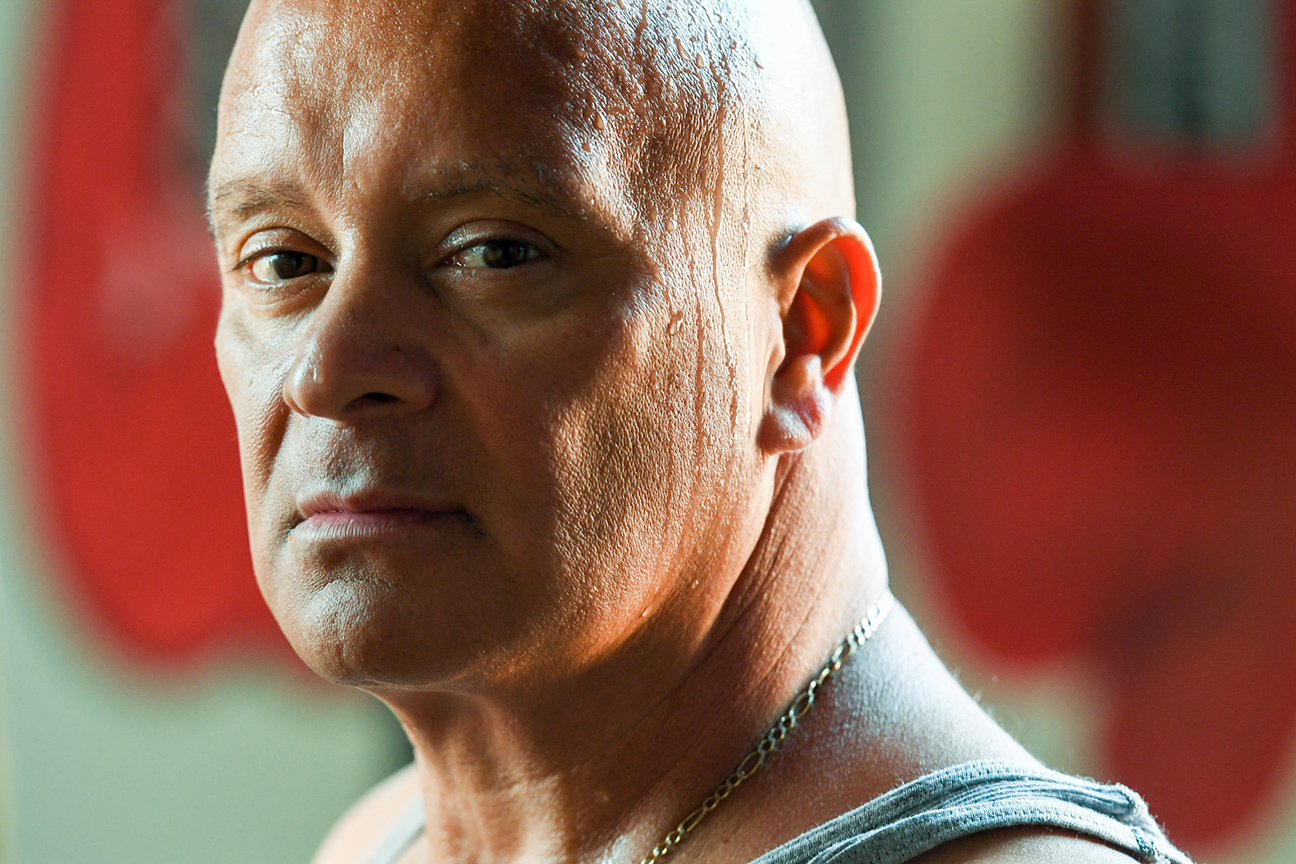 Frank watches as two young boys spar in the ring. Getting them in one-on-one matches helps Frank see how the kids react under pressure. 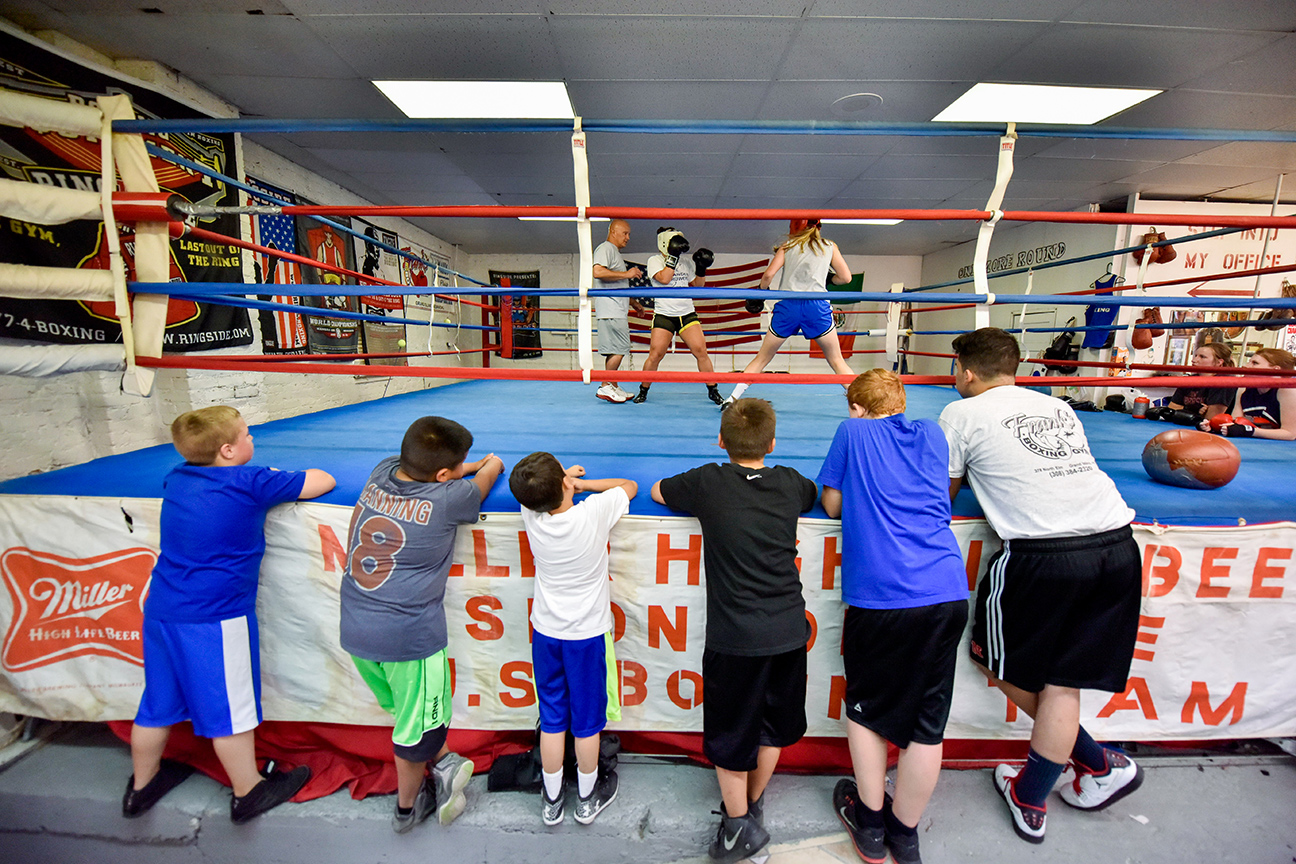 Boys watch as two girls spar in the ring. Sparring is what everyone who takes classes looks forward to. It's when students can showcase skills and figure out what techniques they need to work on most. 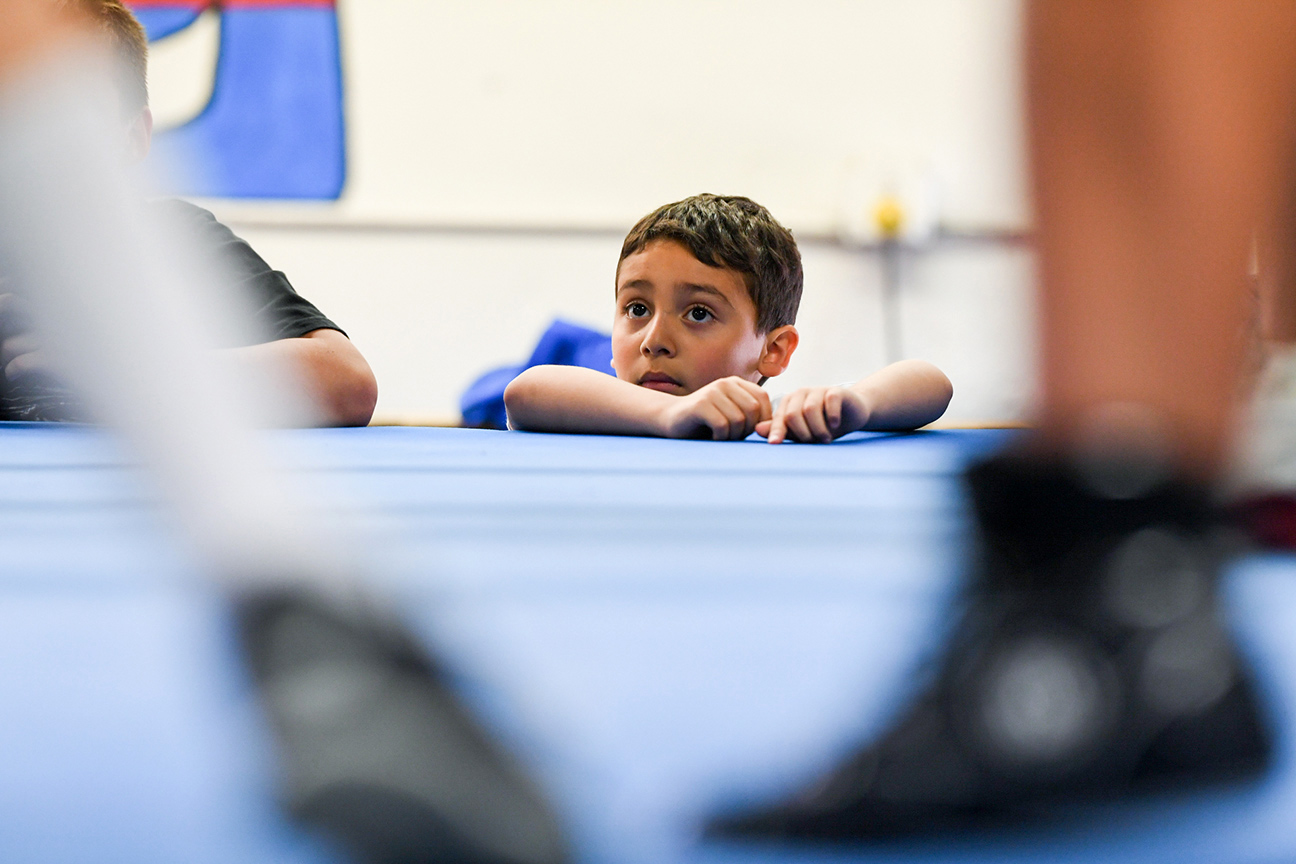 A young boy watches as two girls spar in the ring under Frank's direction. 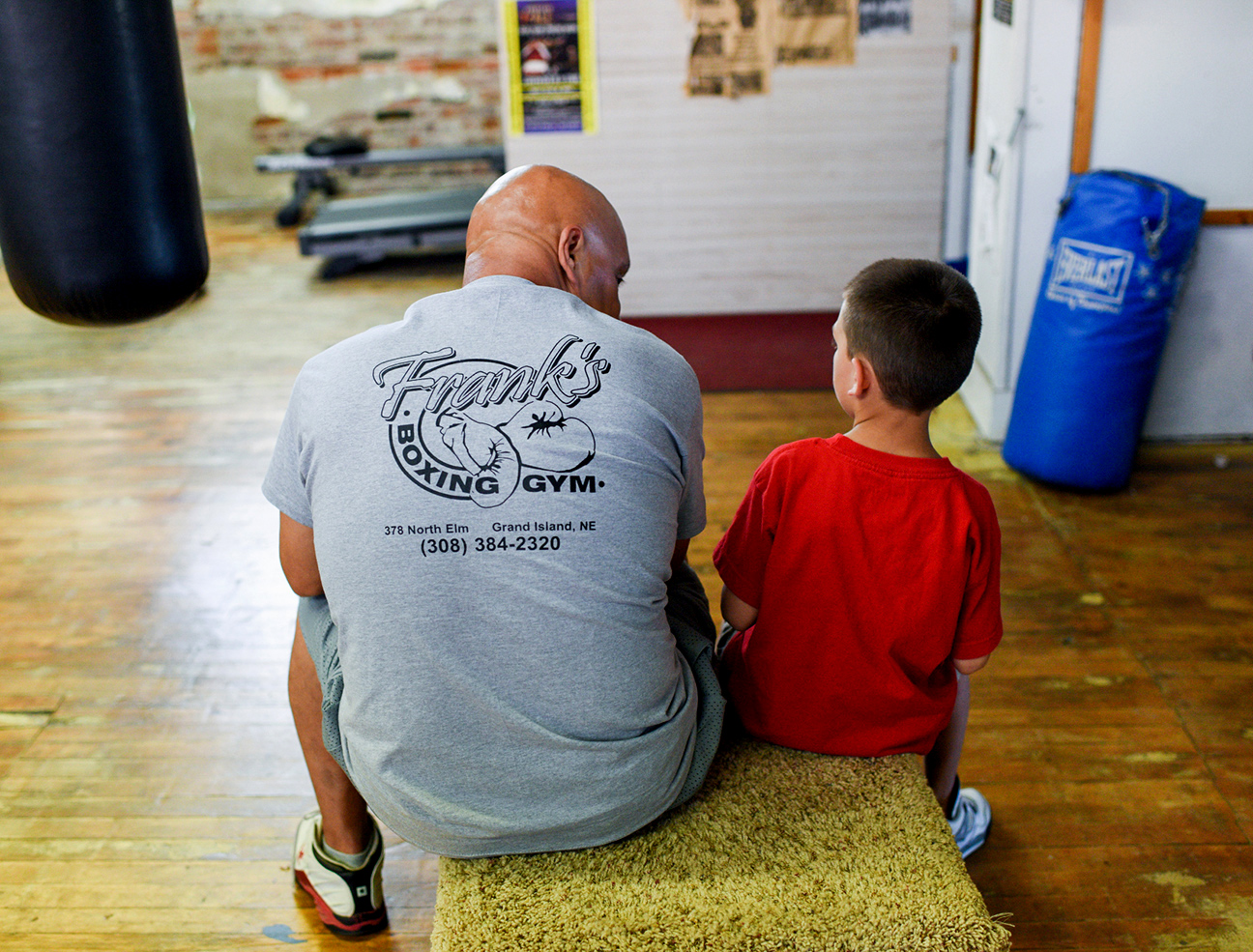 Frank has a talk with Jojo as another young boy works a bag. Frank's gym isn't all about boxing. It's about helping kids build character, and that goes beyond the body. 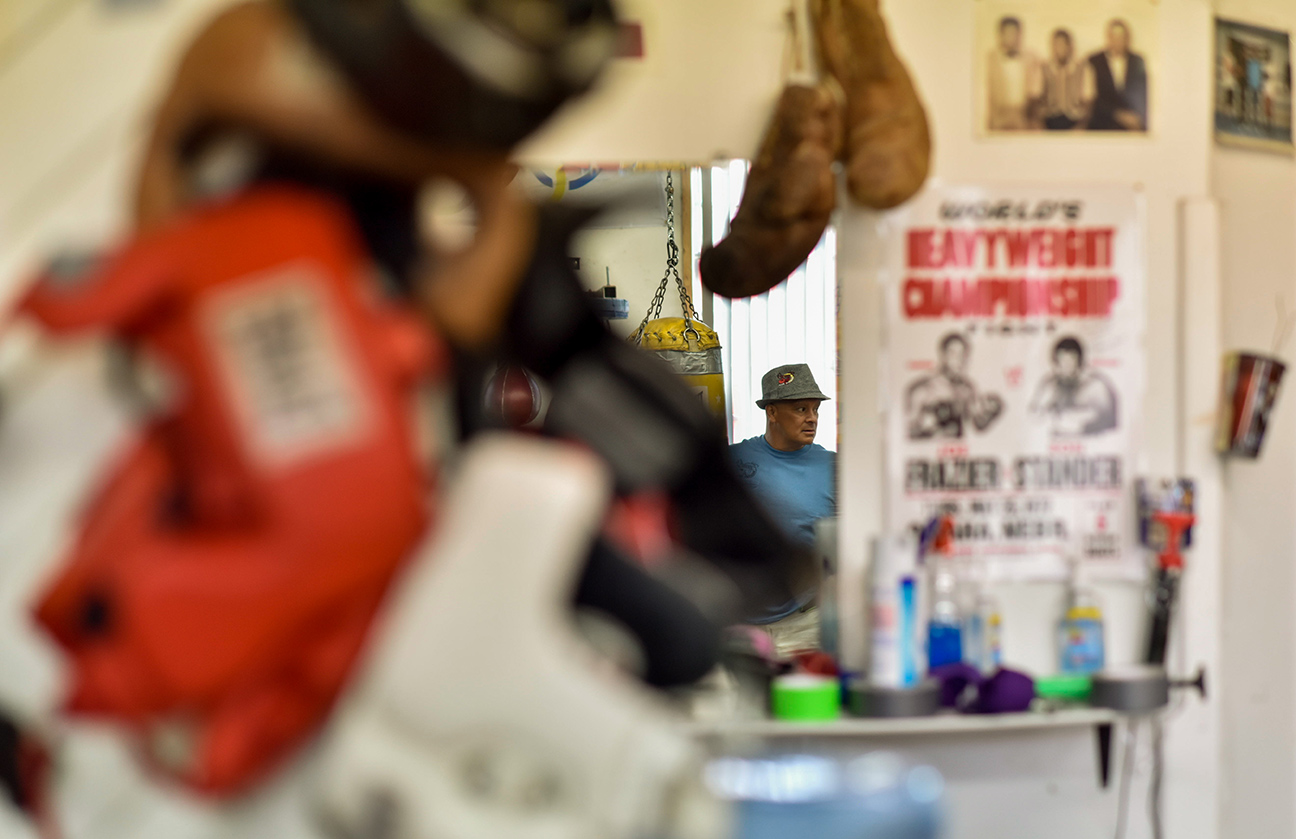 Frank is reflected in a mirror at his gym. He built the gym on the bottom floor of an old apartment building that he purchased nearly 20 years ago. 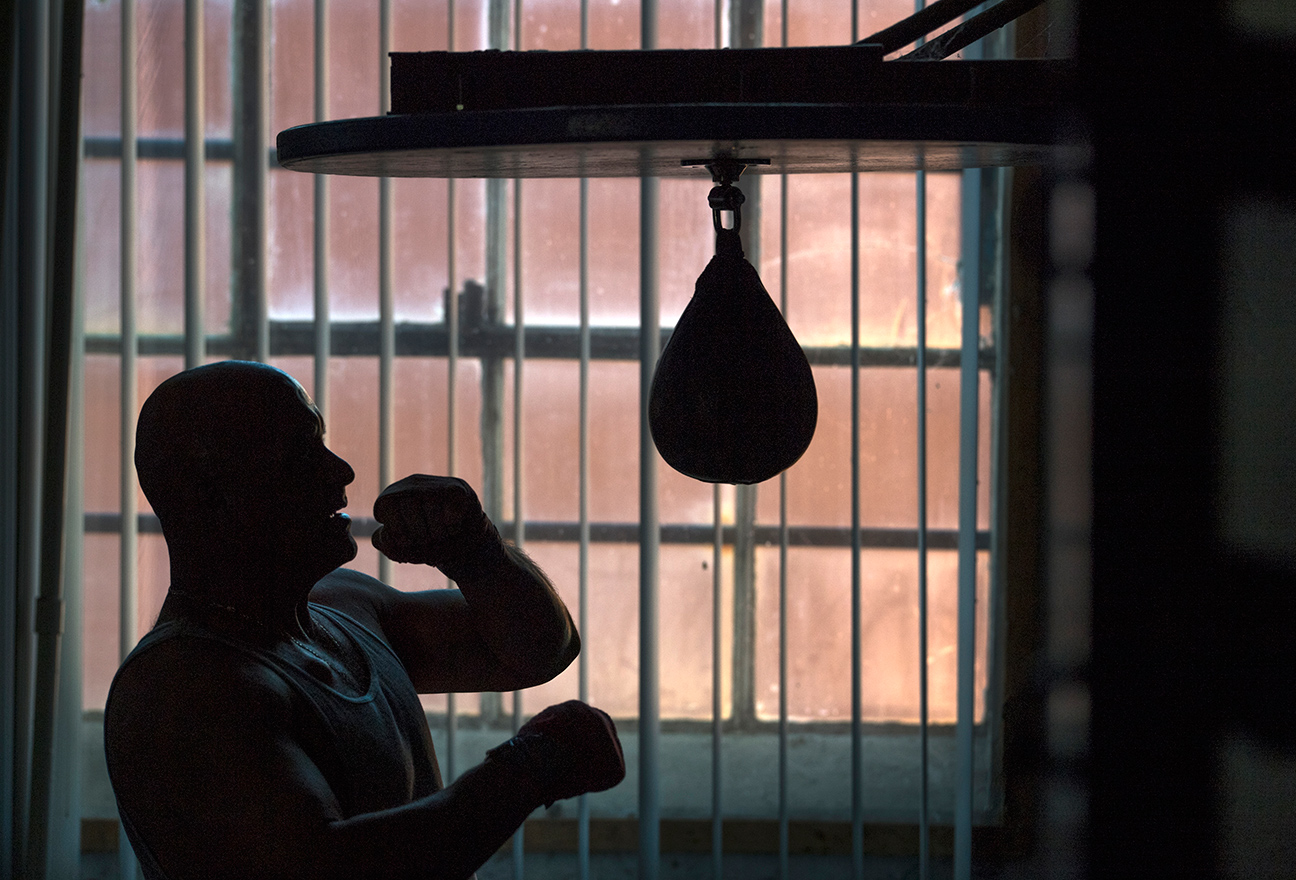 Frank practices on the speed bag. Frank's recovery from his Whipple procedure has been a long one. He says he's back to normal now, but normal isn't what it used to be. He's still learning what is body is and is not capable of. 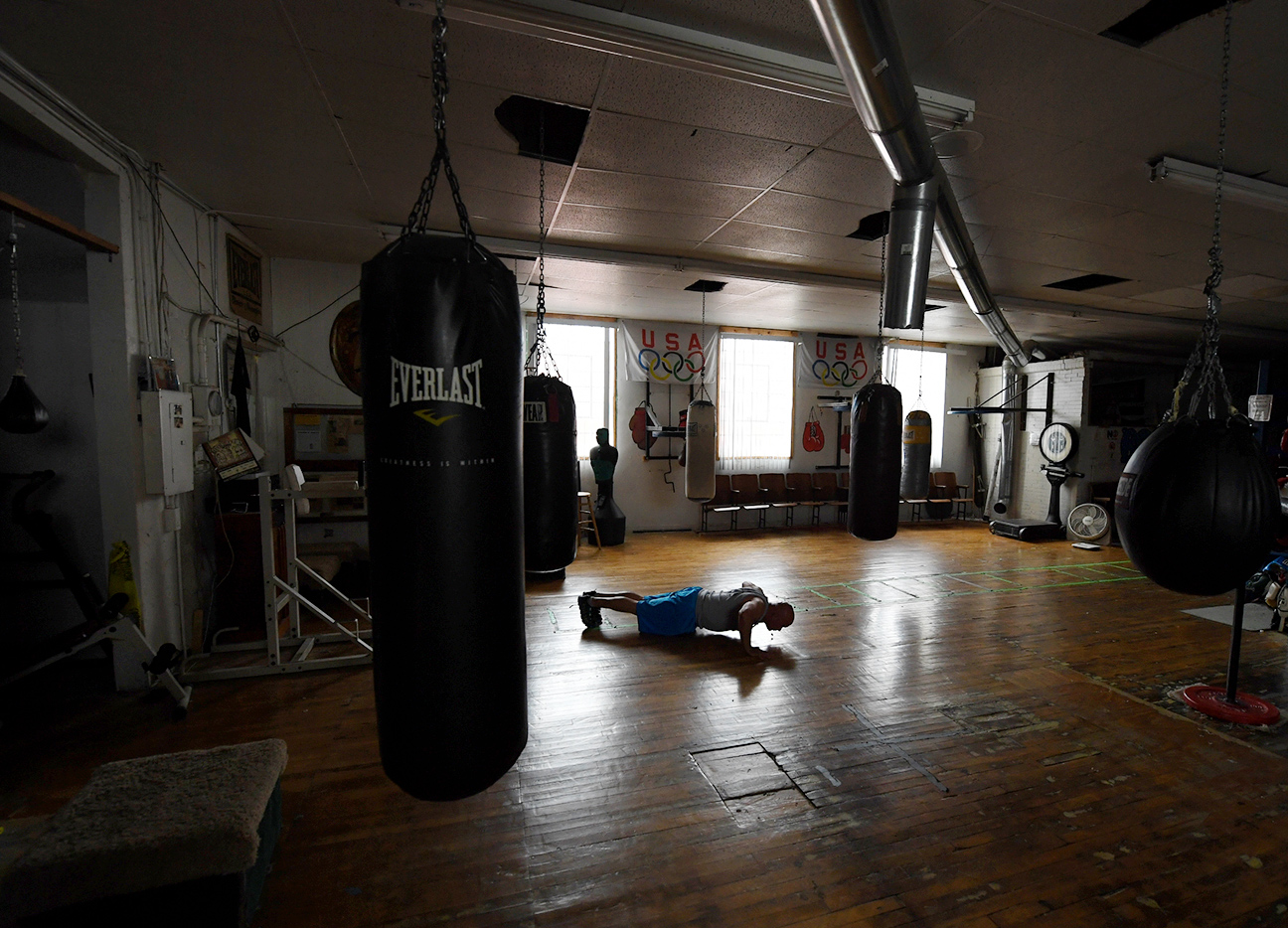 Frank does pushups in his empty gym early in the morning. The gym is open Monday through Thursday from 5 p.m. to 8 p.m. Being in shape has always been important for Frank. For many years, going through his cancer treatments, he wasn't able to be physically active. Getting back in shape is an ongoing process. 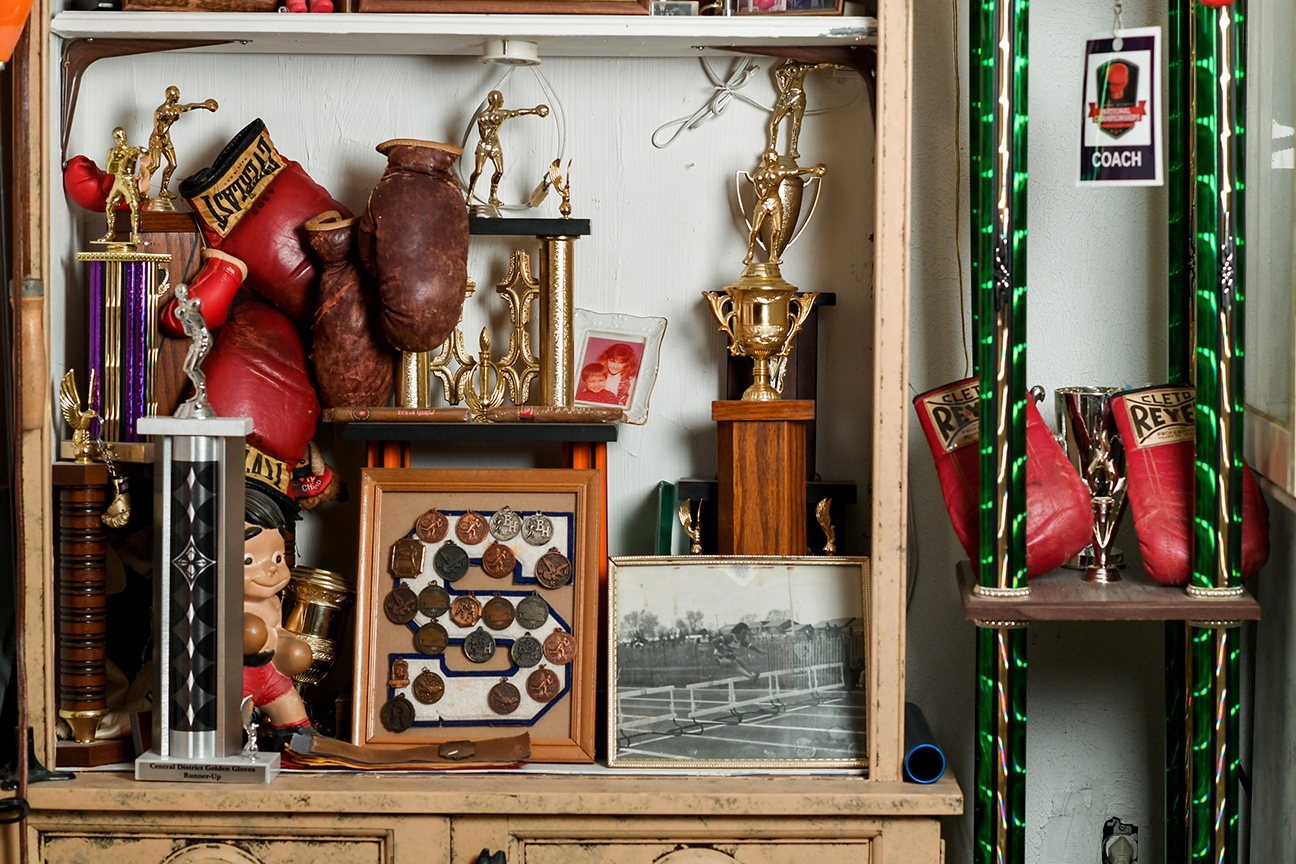 The basement of Frank's house is a trophy room, a laundry room and a gym. His trophy room is full of newspaper articles about him, trophies he has won and pictures and gloves he has gotten autographed by boxing greats over the years. 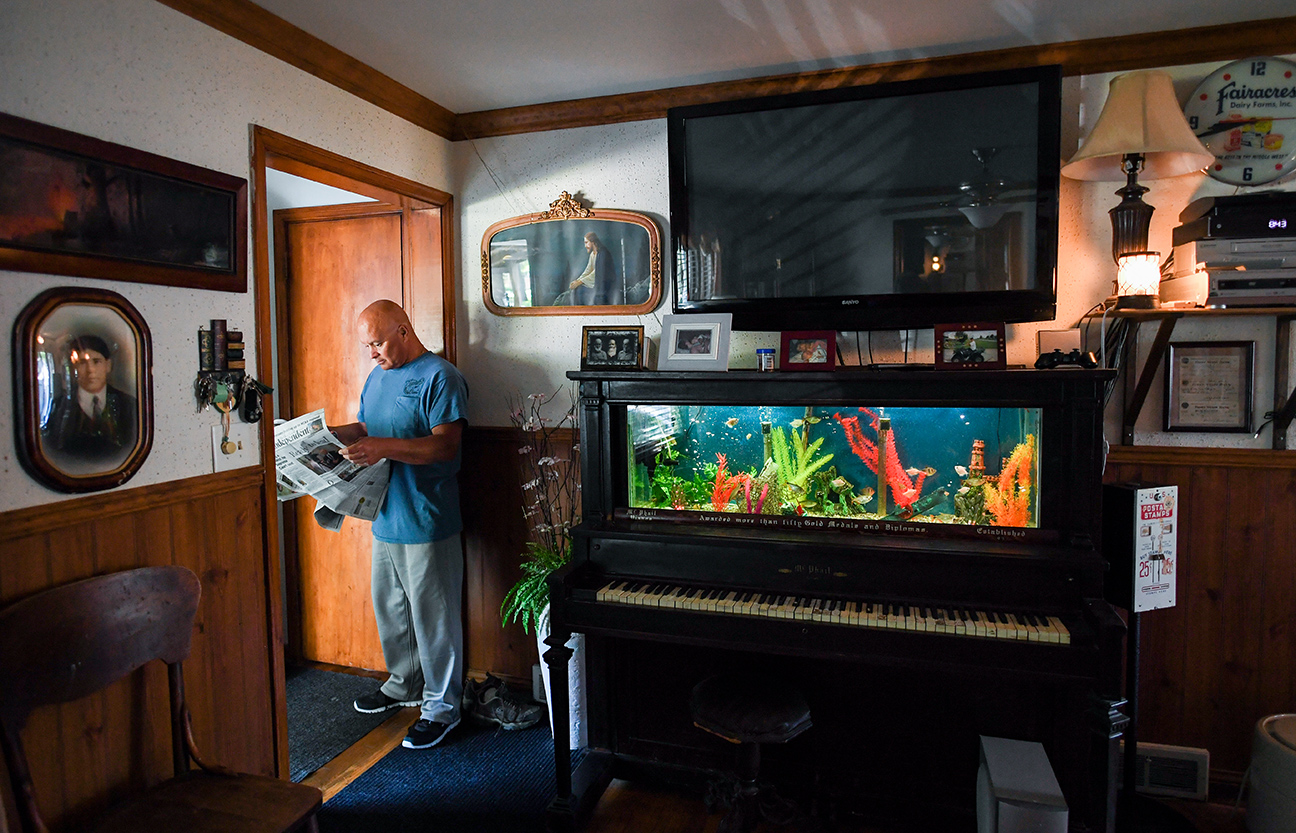 Frank reads The Grand Island Independent, the local newspaper, inside his house. When he's not working or at the gym (which isn't often) he makes fish tanks, among other things. The fish tank in his living room is attached to a piano. 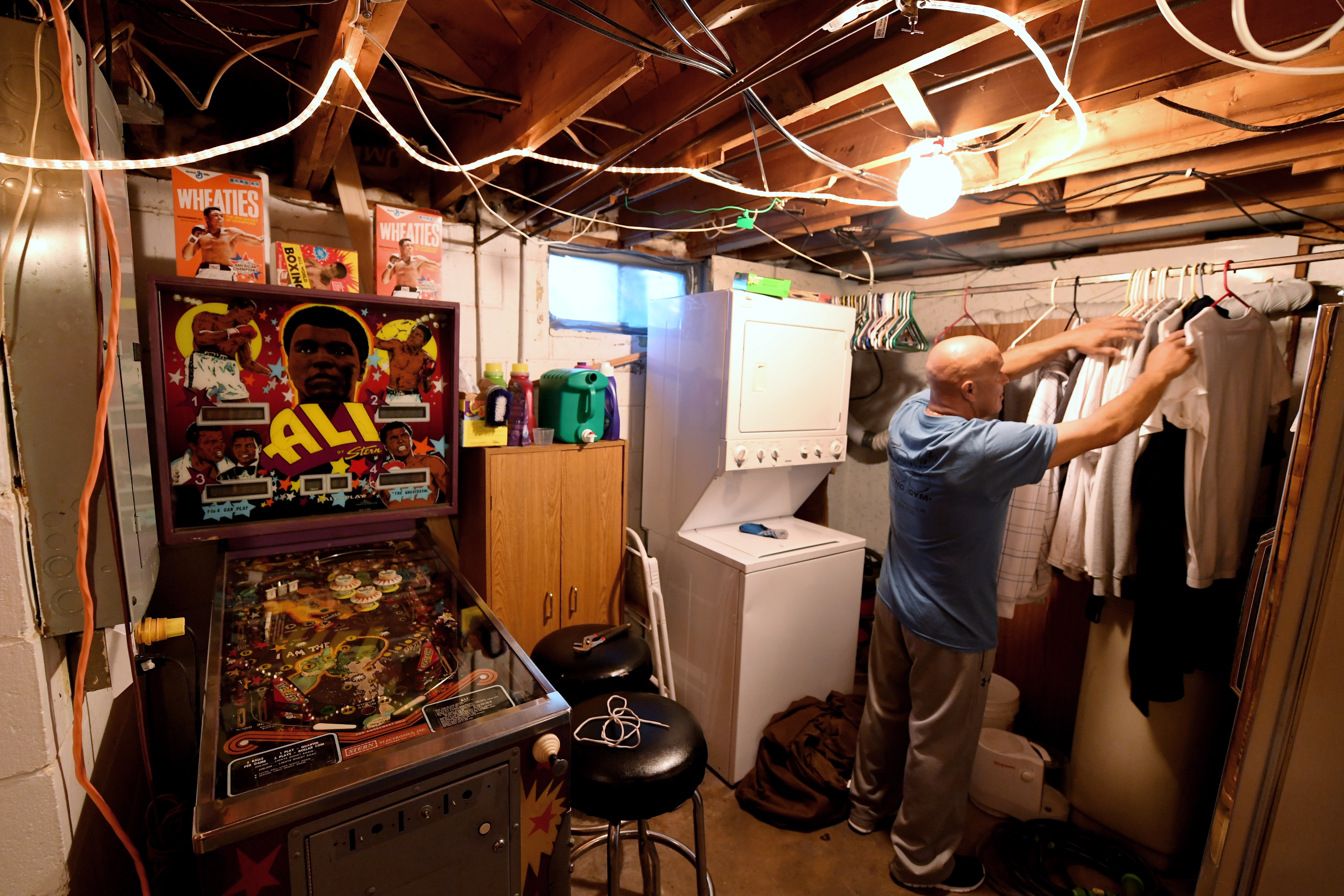 Frank picks a shirt in the laundry room in his basement. Frank's laundry room is joined in the basement by an in-home gym and a trophy room. 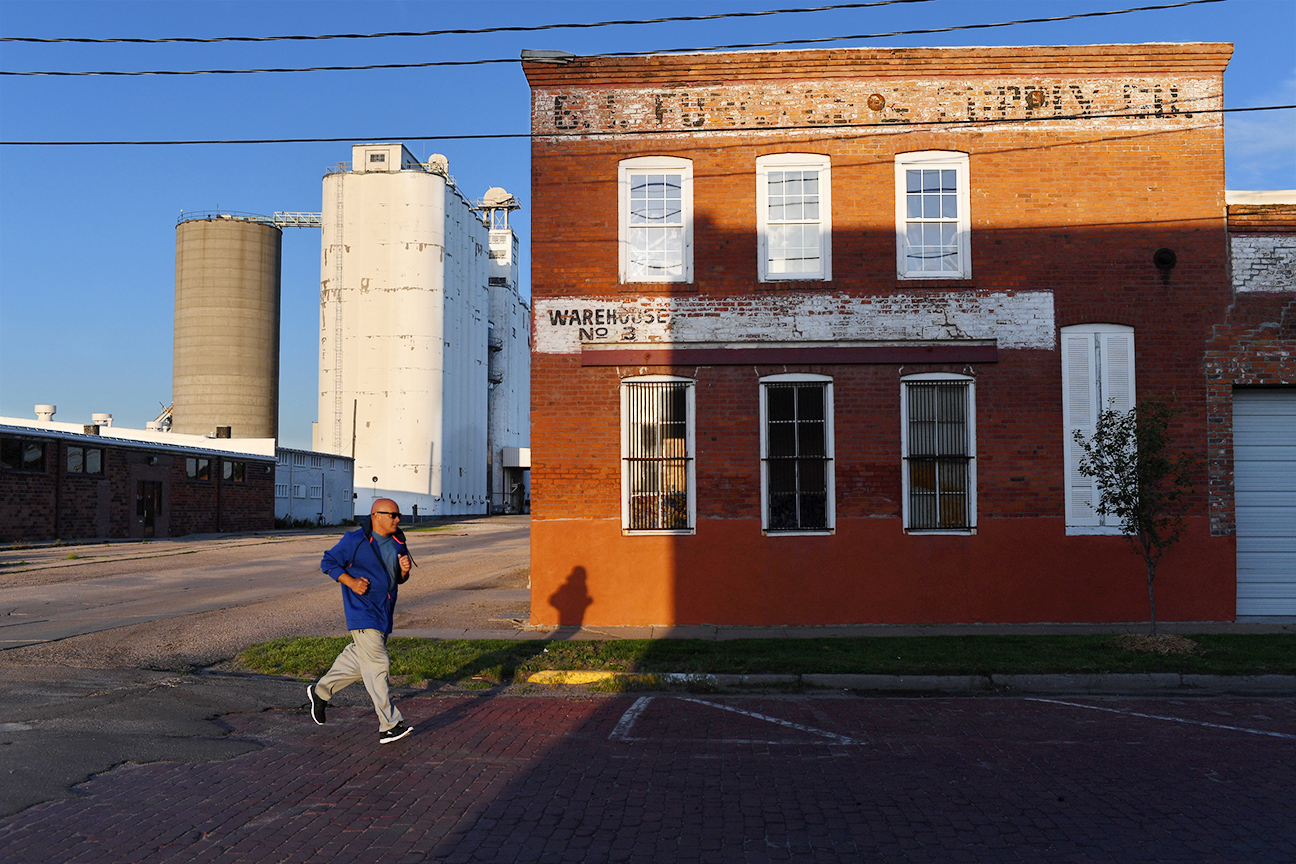 Frank goes through his morning jog. Frank's gym is a block off the train tracks and grain elevators in town. Throughout the day, those in the gym can hear train whistles as freight makes its way through town. 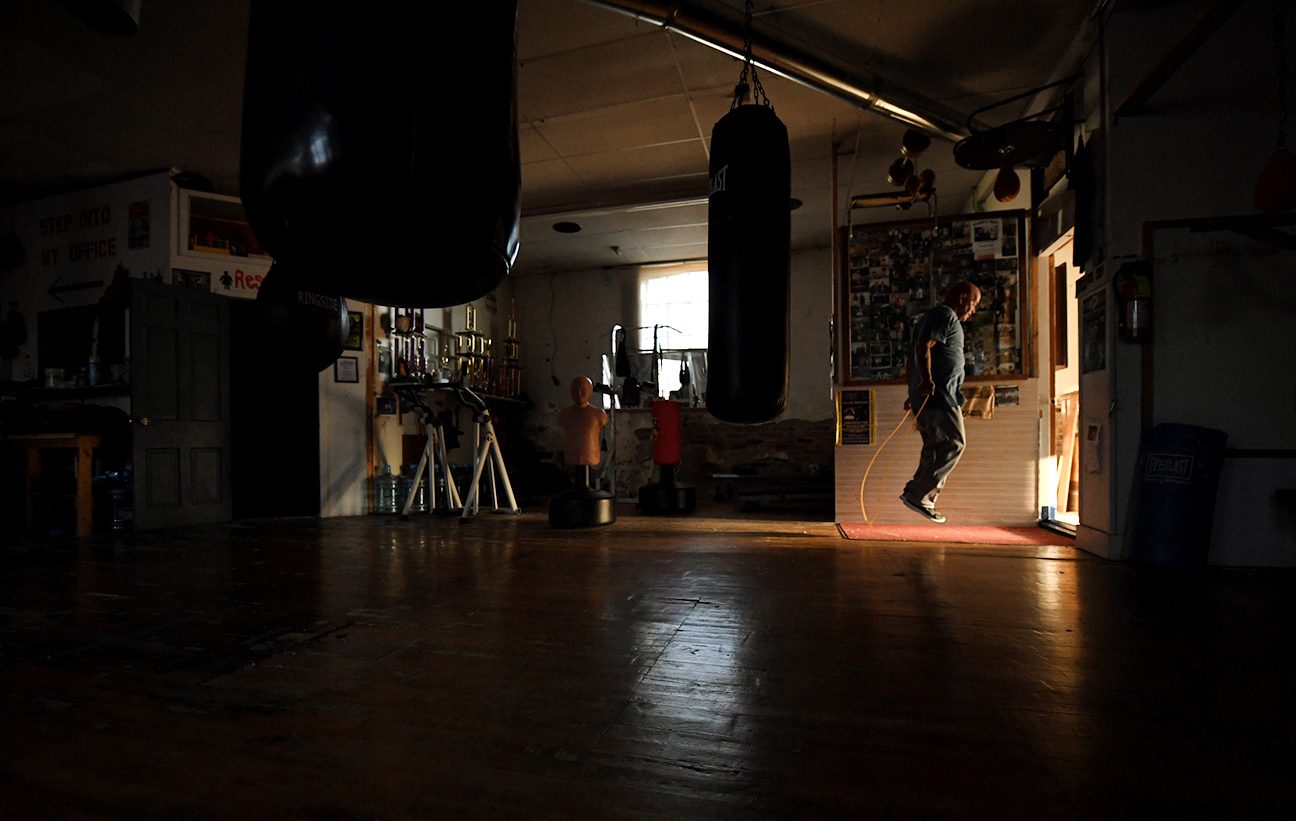 Frank jump-ropes inside the gym at sunrise. While the gym is only open from 5 to 8 at night, Frank uses it often for his own workouts before and after work. 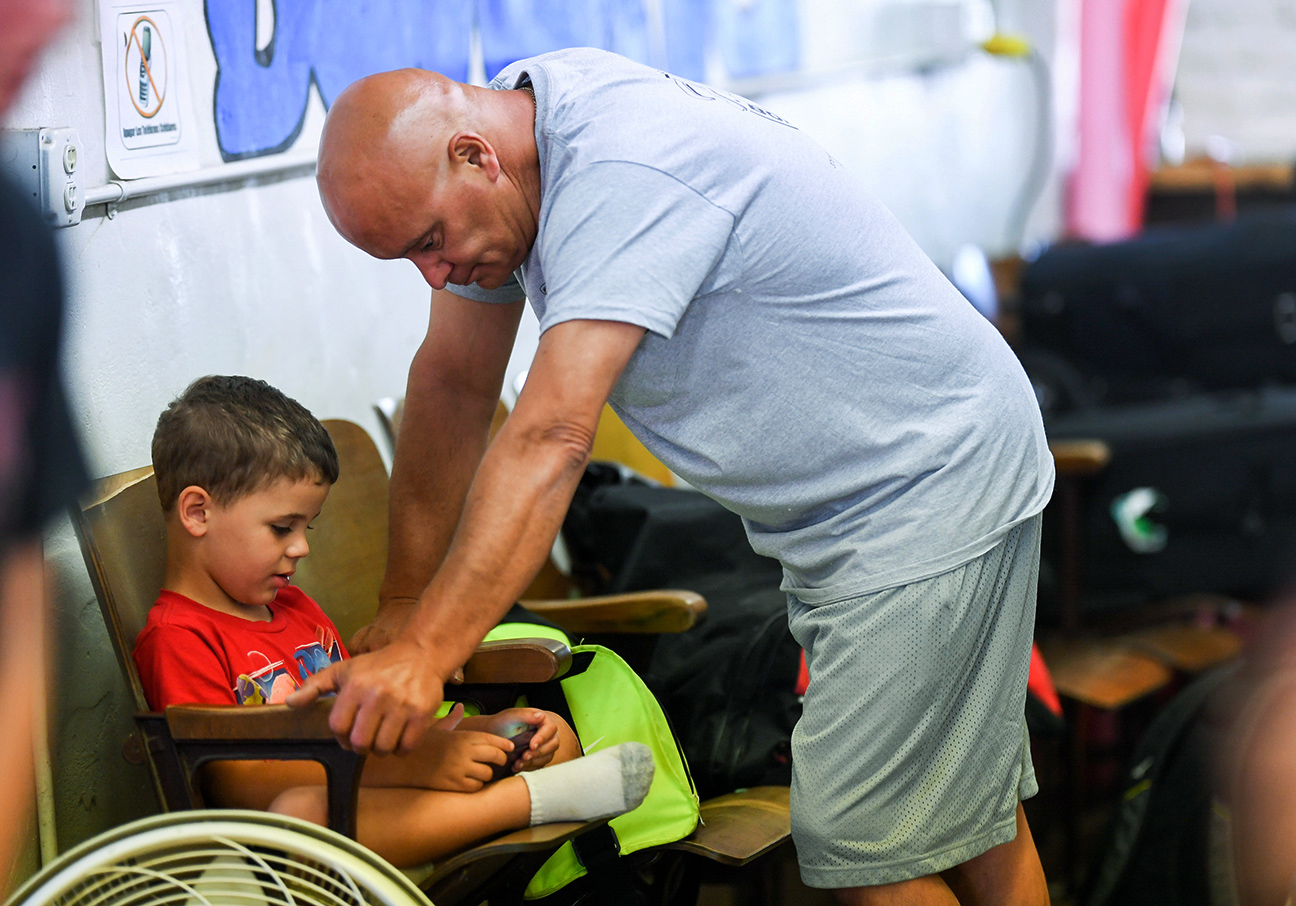 Frank talks to Manny (age 4), the son of one of the women in his class. Manny had been giving his mother attitude on this day, so his punishment was to come to boxing class and listen to Frank. Manny badly wants to participate in some of the gym's activities, and Frank says he can begin participating as soon as he starts acting right. 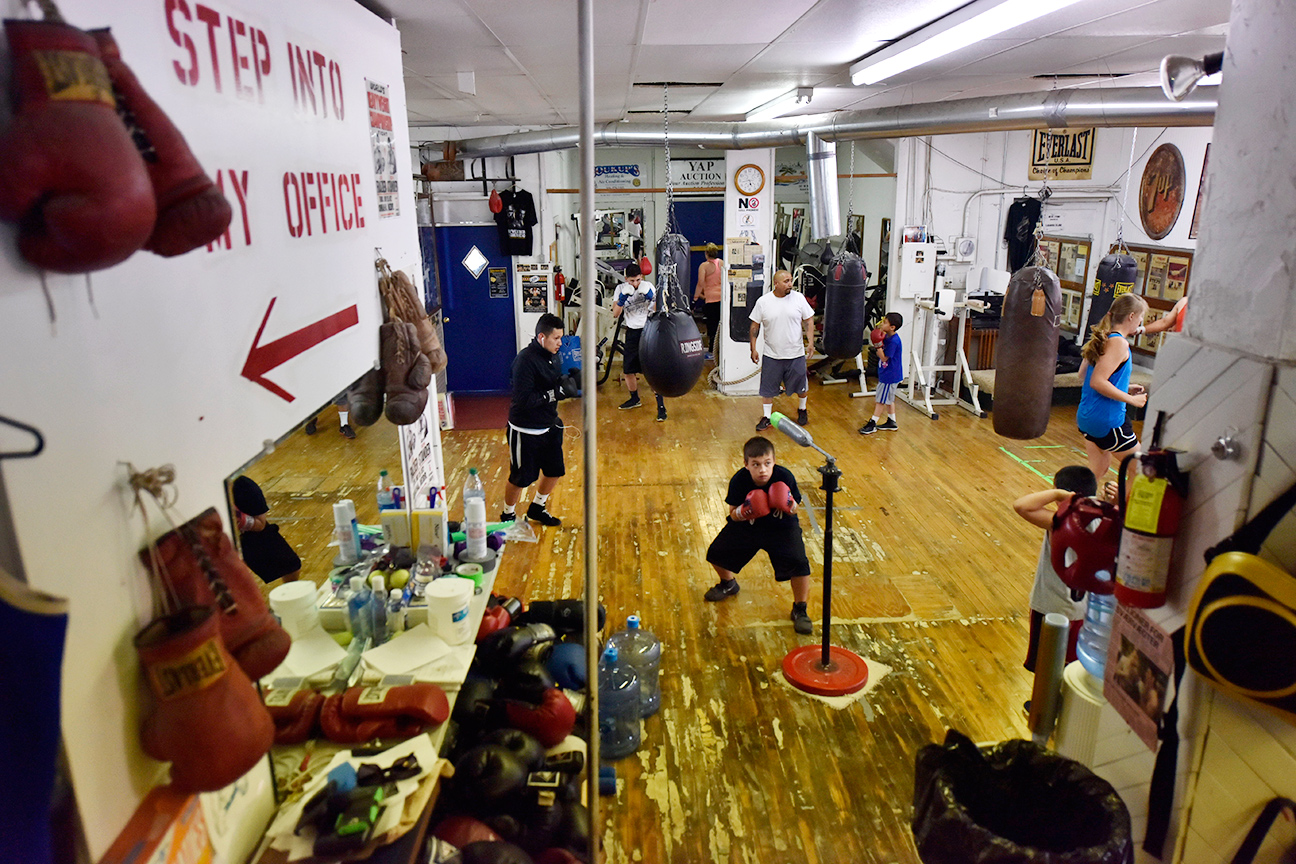 The view from the boxing ring over Frank's gym. 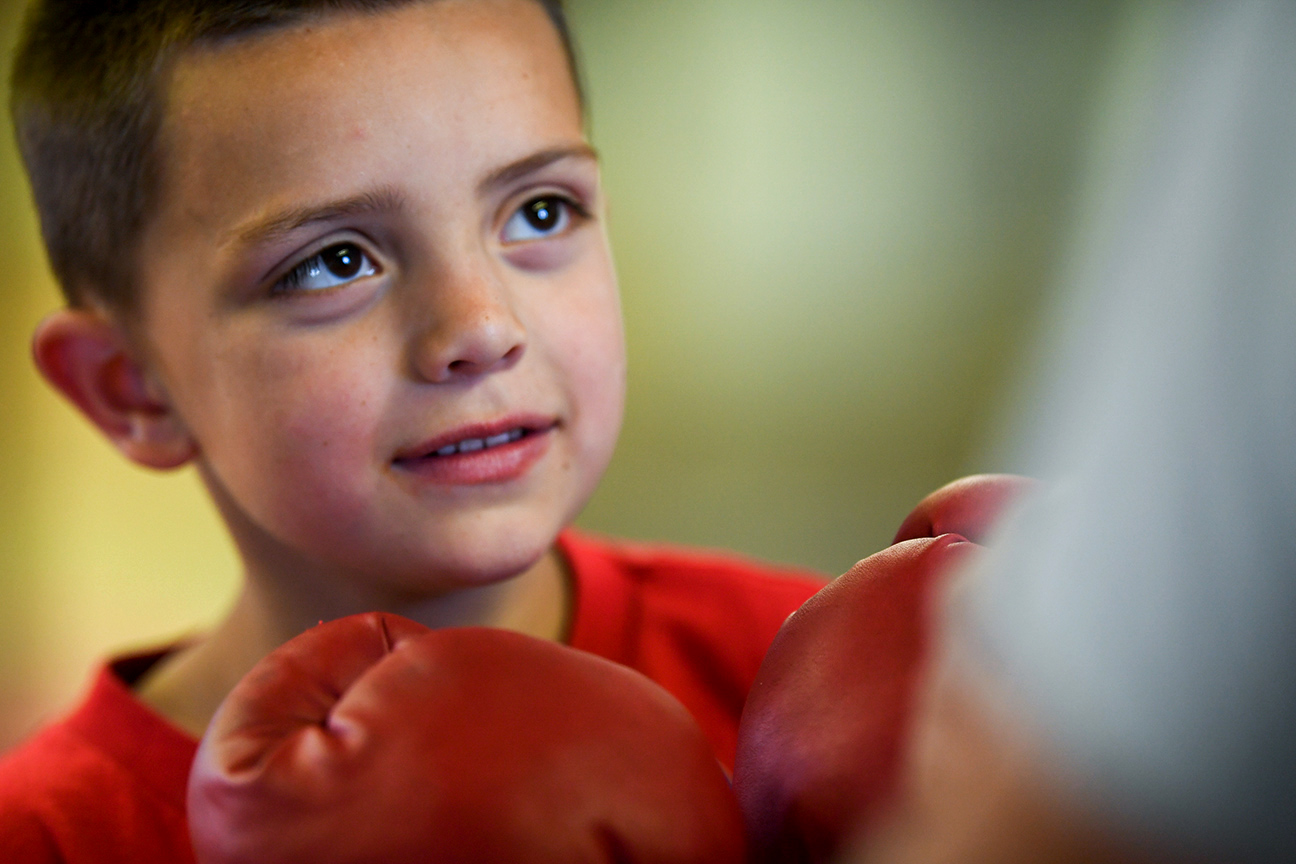 Jojo gets instruction from Frank. Frank had to find an extra-small pair of gloves for Jojo, the youngest member of the gym at 5 years old. 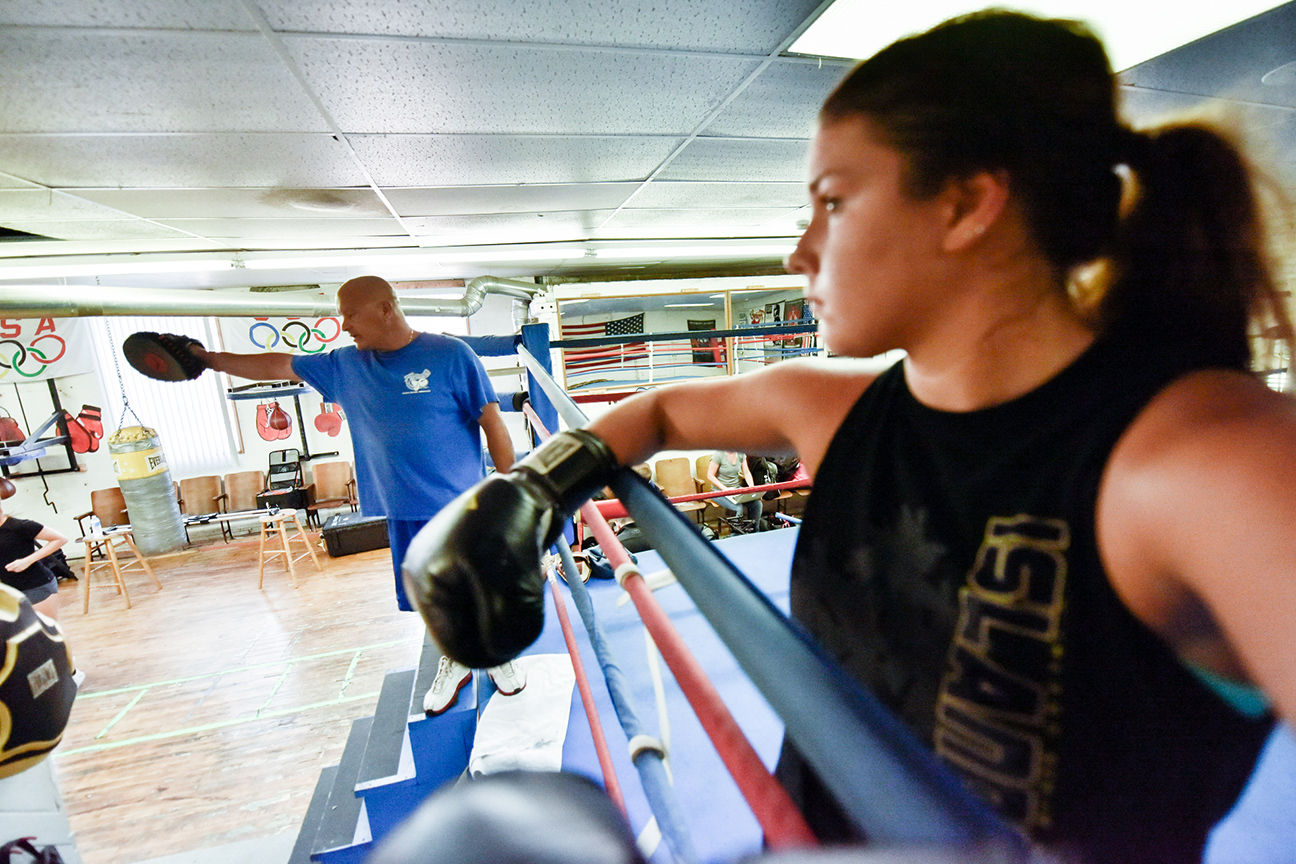 Frank yells directions across the gym before entering the ring with a student. 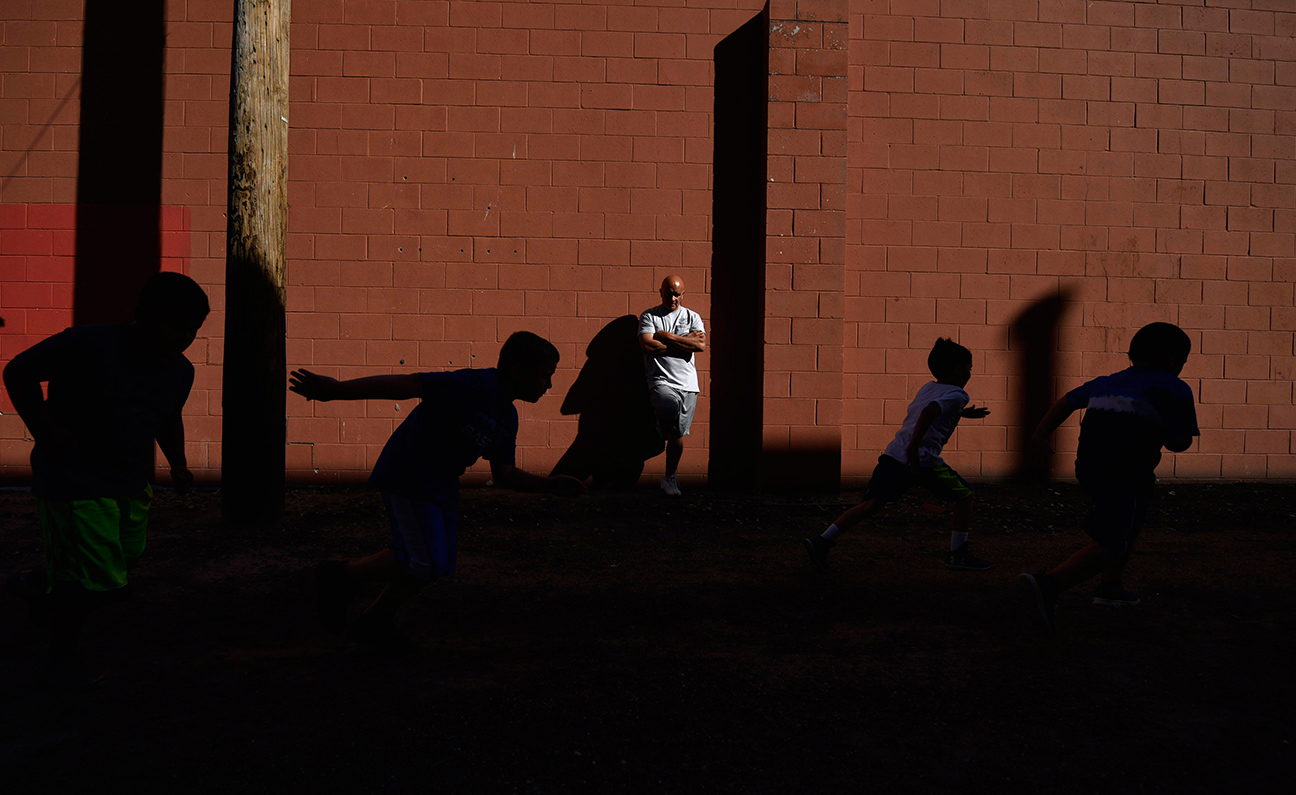 Frank watches as his class of boys runs past. When the kids give him attitude -- even if it's only one person -- he has them run sprints in the alley outside the gym. 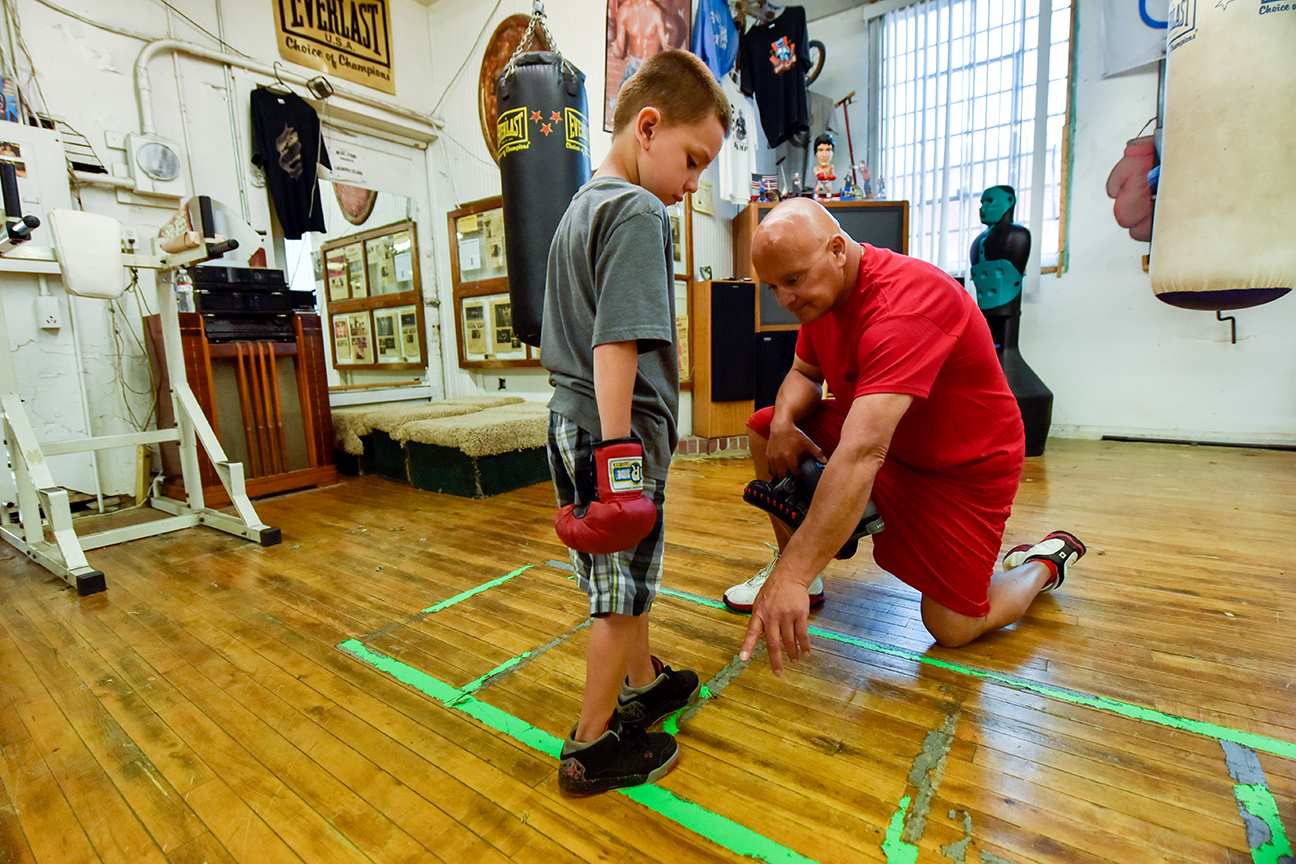 Frank gives some footwork pointers to Jojo (age 5), the youngest member of his gym. Jojo is one of the less fortunate kids at the gym, so Frank does not charge Jojo's dad to send his son to the gym. However, Frank says he does ask him to supply a case of toilet paper every now and then. 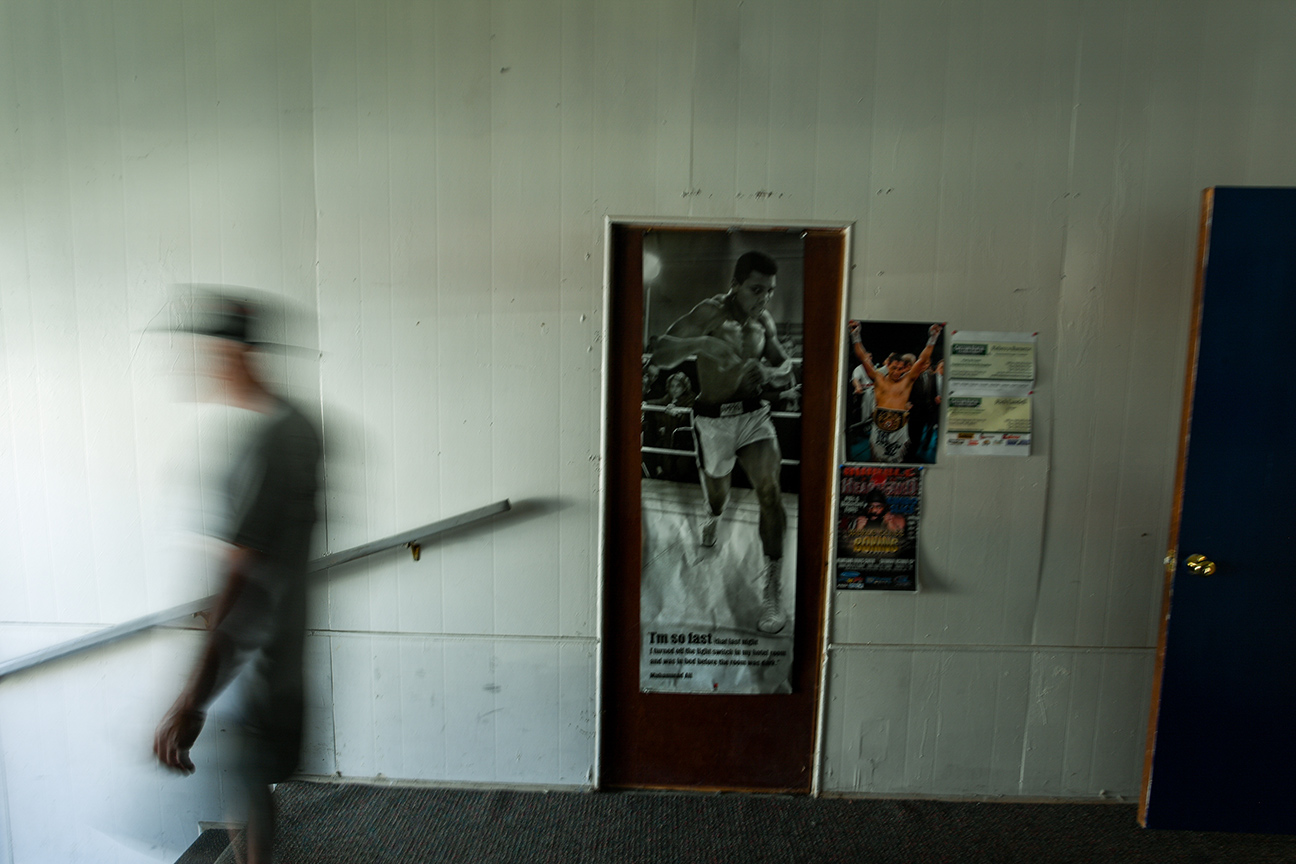 Franks walks past a Muhammad Ali poster on the way out of his gym. Ali is pictured regularly throughout his gym and home.