he ability to imitate is key for newly born children in developing motor skills and managing emotions. It also tightens the bond with their parents. It was what set Isaiah Adel (pictured above) on his path at age 2 -- watching his father, Christian, who was always putting in the family's Poughkeepsie, New York living room. Four years later, Isaiah found himself competing against a group of very talented youngsters at the 17th Annual U.S. Kids Golf World Championship in Pinehurst, North Carolina. Christian was right by his side -- carrying his clubs.

The bond between parent and child over the love of golf was on display in large fashion this past August, as 1,552 kids, ages 5-12 from 52 countries, competed in the event. Almost all of the participants had a parent for a caddie.

Most sports keep parents cordoned off the field of play, but the event allows them to walk side-by-side with their child as fan, coach and parent, forcing a delicate balance to be played out over each round. For Joe Morrissey, father of 5-year-old Tommy, who was born with one arm, that balance is easy. Tommy would cry when his father changed the television channel from a golf match to a cartoon, so being out on the course is the best way to ensure his son's happiness. Christian can testify to that, as well as the challenge of getting his son off the course and home in time for dinner. 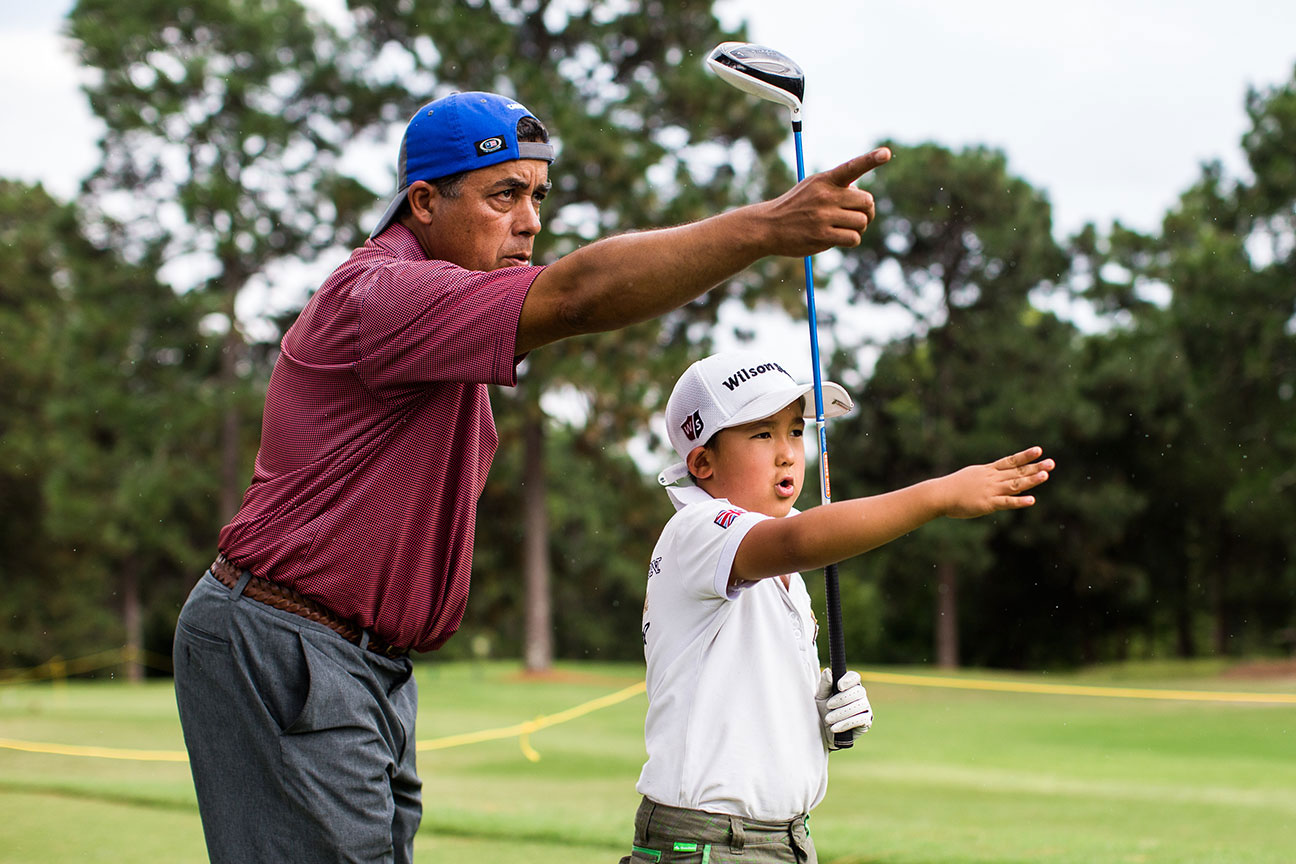 Truong Aime of Val Thorens, France, discusses his tee shot with his father on the 5th fairway. 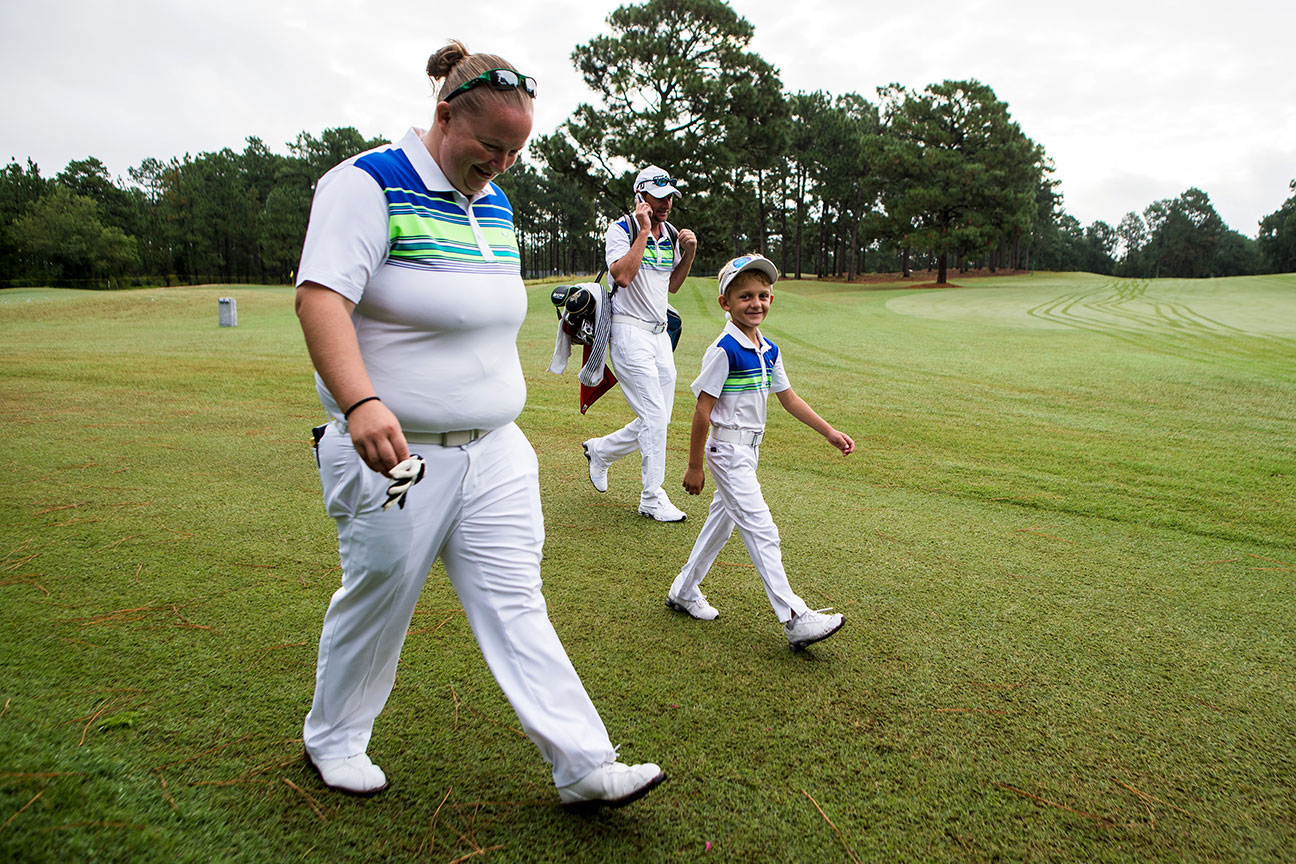 Team uniforms aren't necessary at the U.S. Kids Golf World Championship, but they sure look cool on the Amy family from New Iberia, Louisiana. Six-year-old Hayden leads the way. 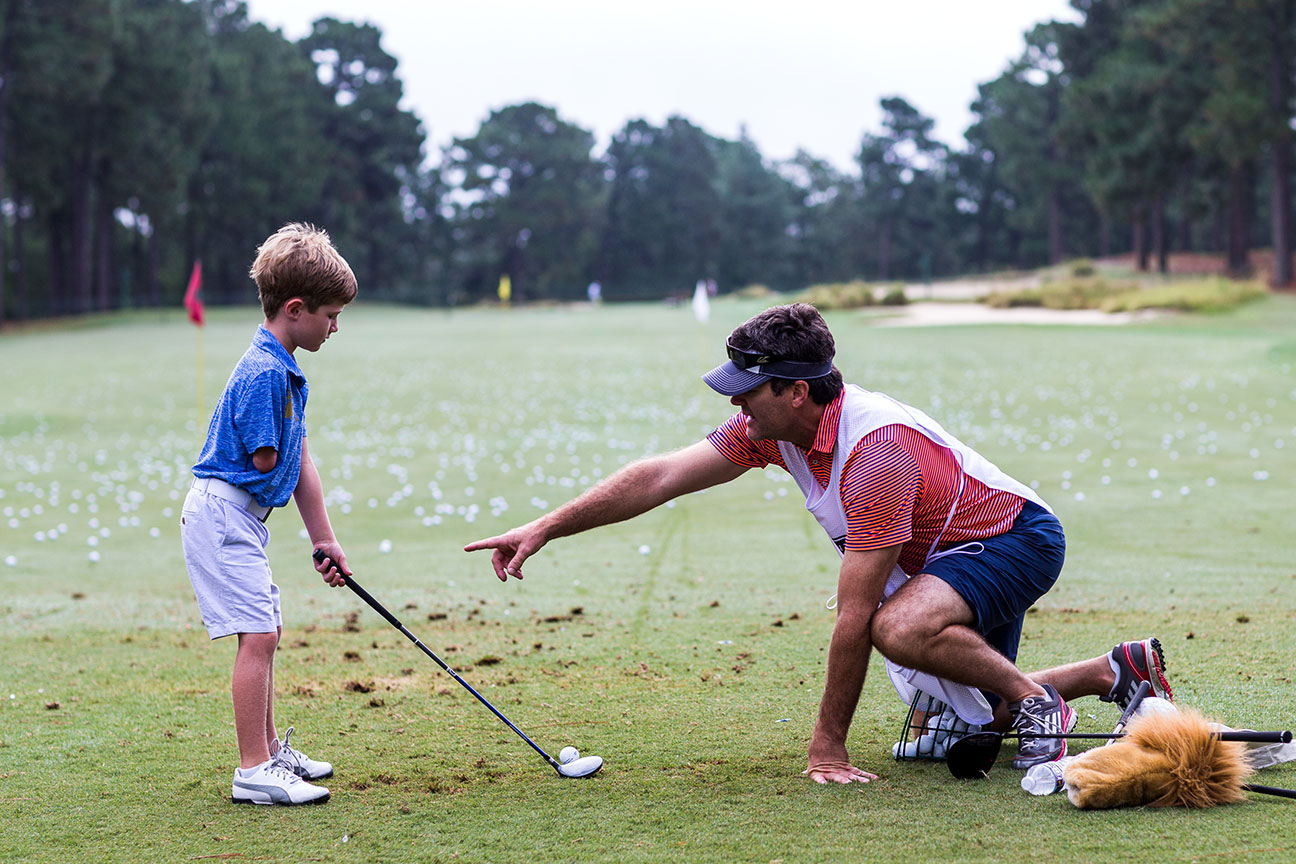 Joe Morrissey works with son Tommy on the driving range before the start of second round. 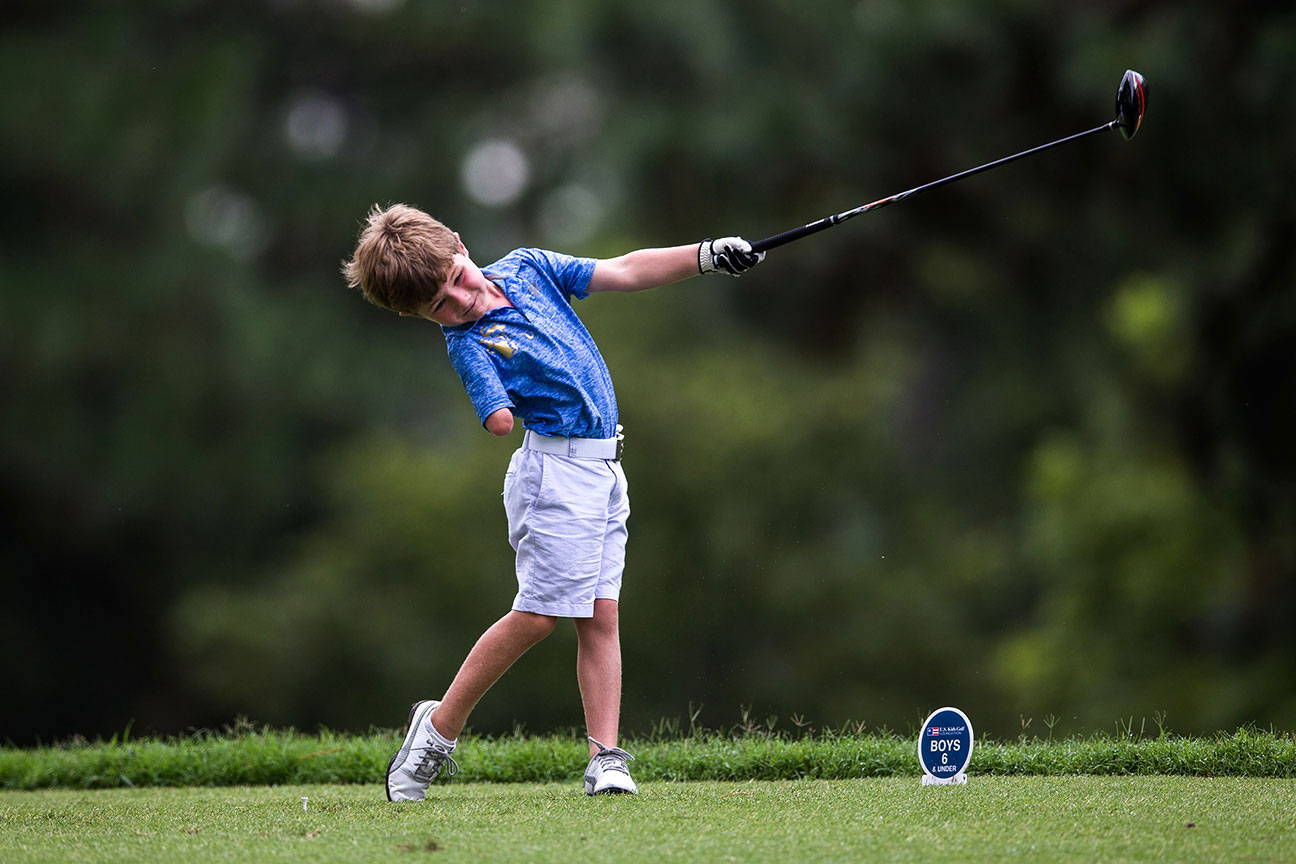 Tommy was born with one arm, but it's all business when he's on the course. He shows up at every tournament expecting to win. 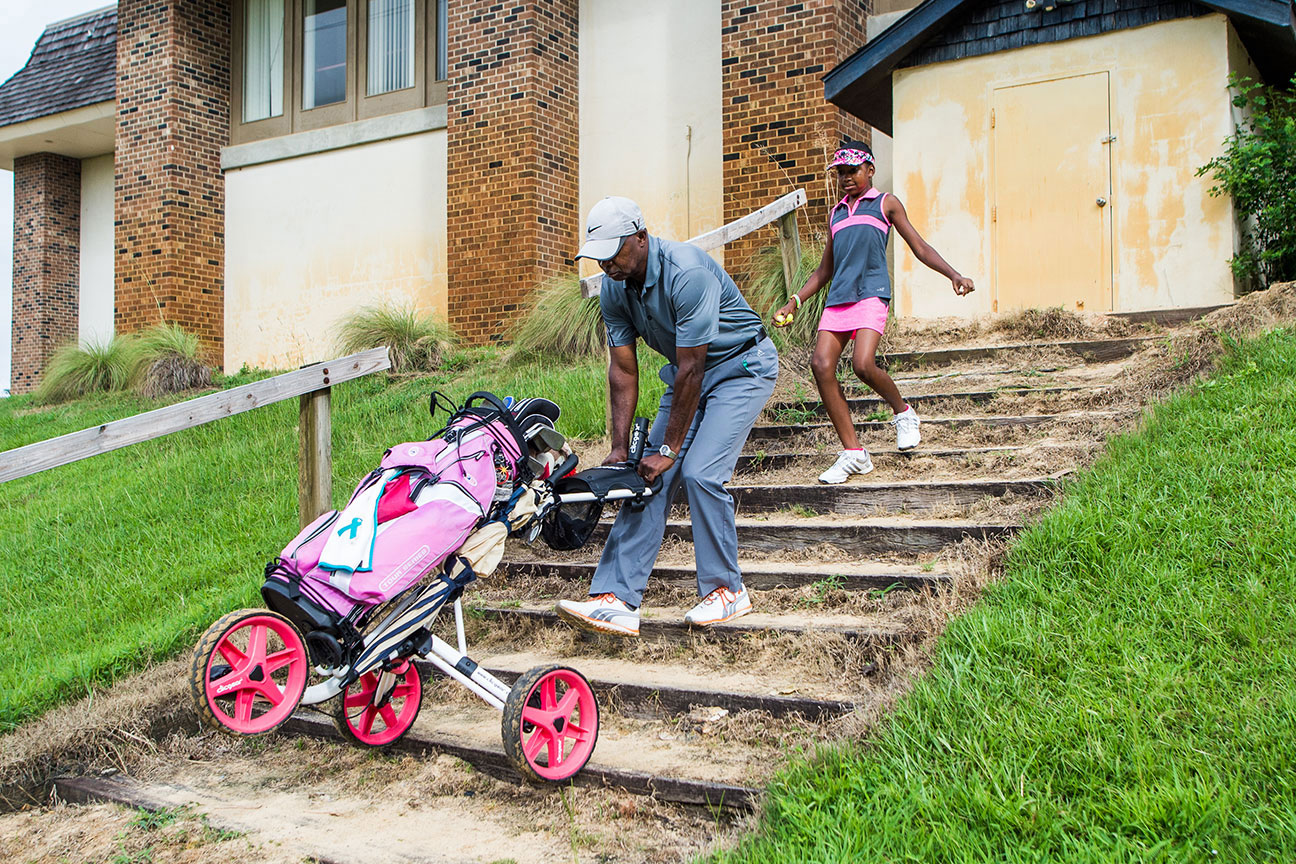 Oh, the lengths a caddie (or dad) must go to get his golfer ready for a round. Ariana Blagrove's father, Aaron, pushes her bag down the stairs on the way to the driving range before her first round of action. 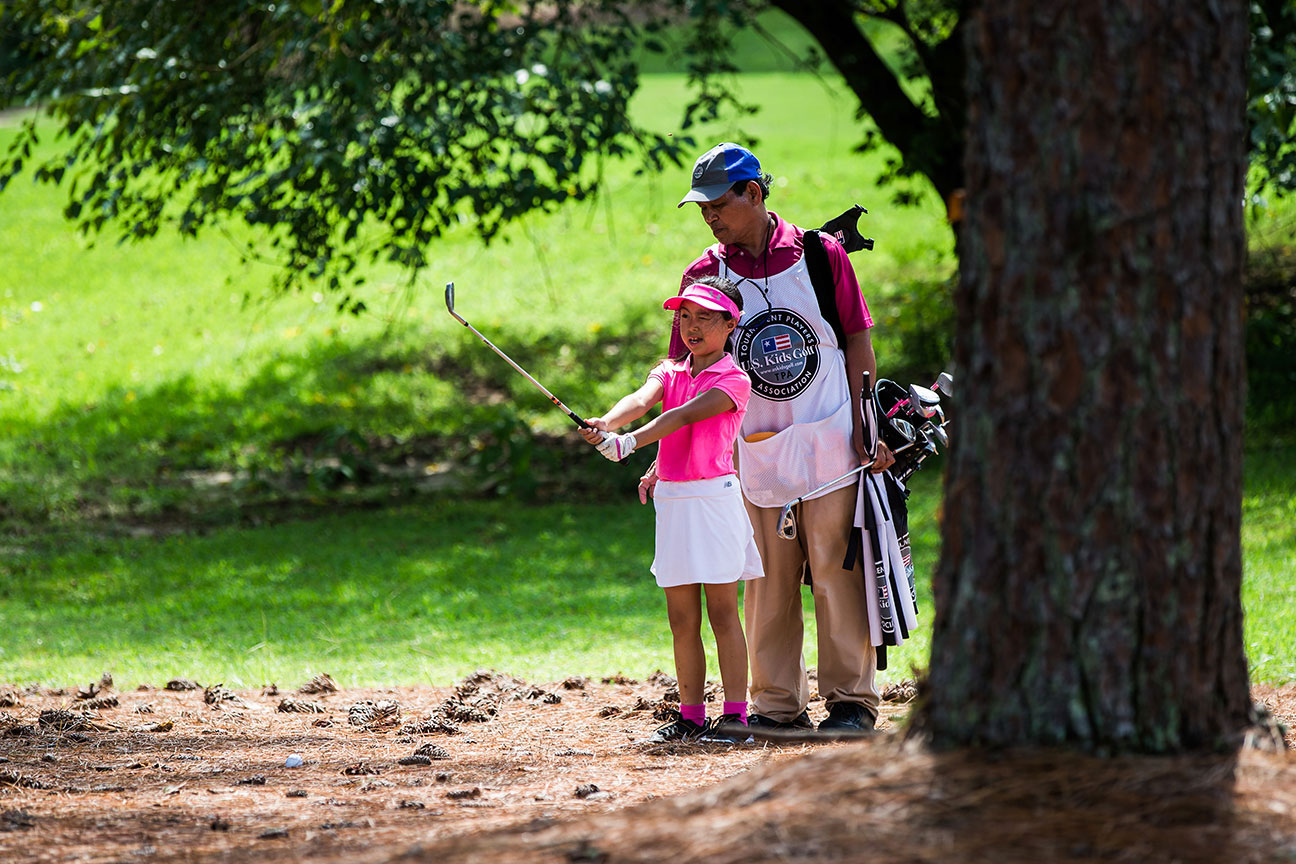 Meg Lagera of Falls Church, Virginia, tries to line up her shot out of the rough on the 8th hole with help from her father. 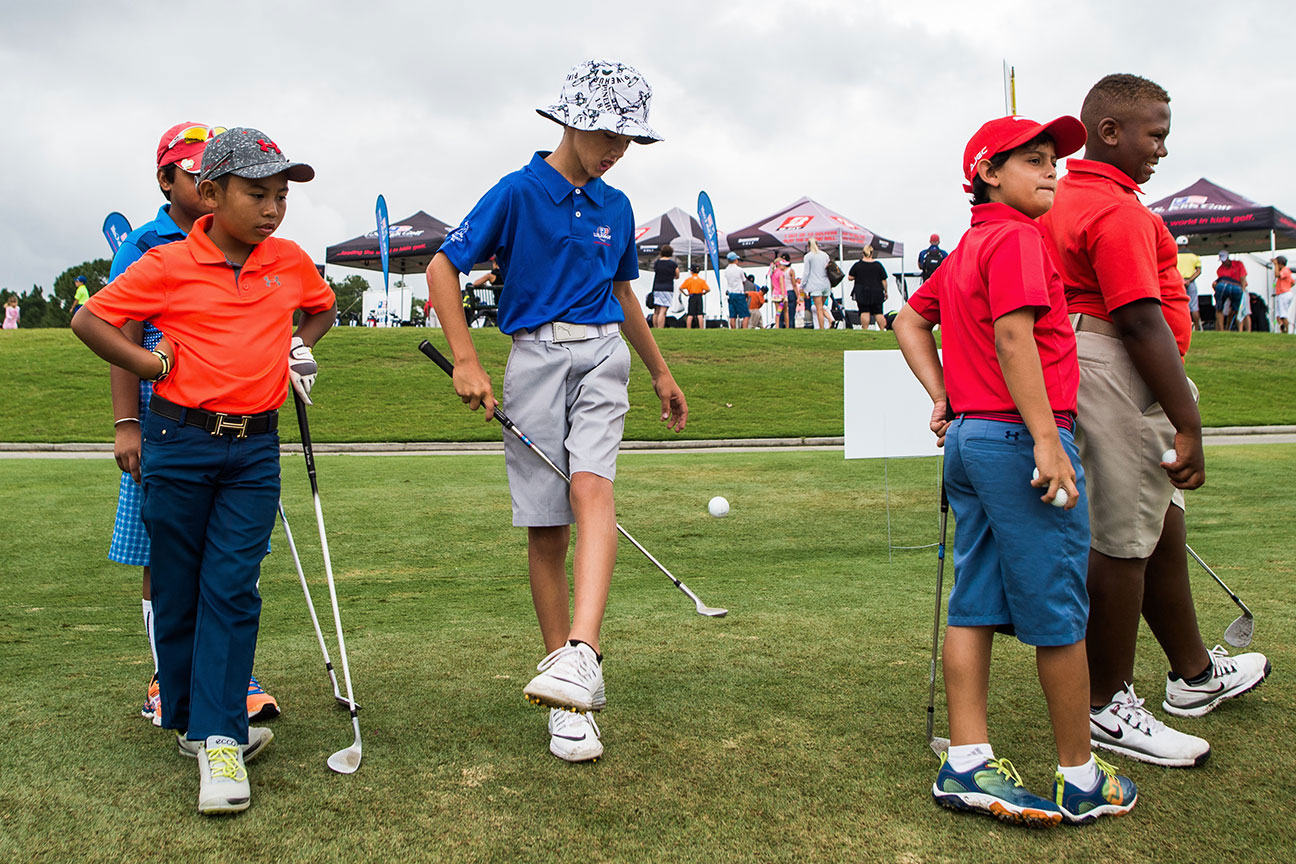 Julian Monas does some pretty cool ball tricks while waiting to compete in one of the various contests held at the driving range. 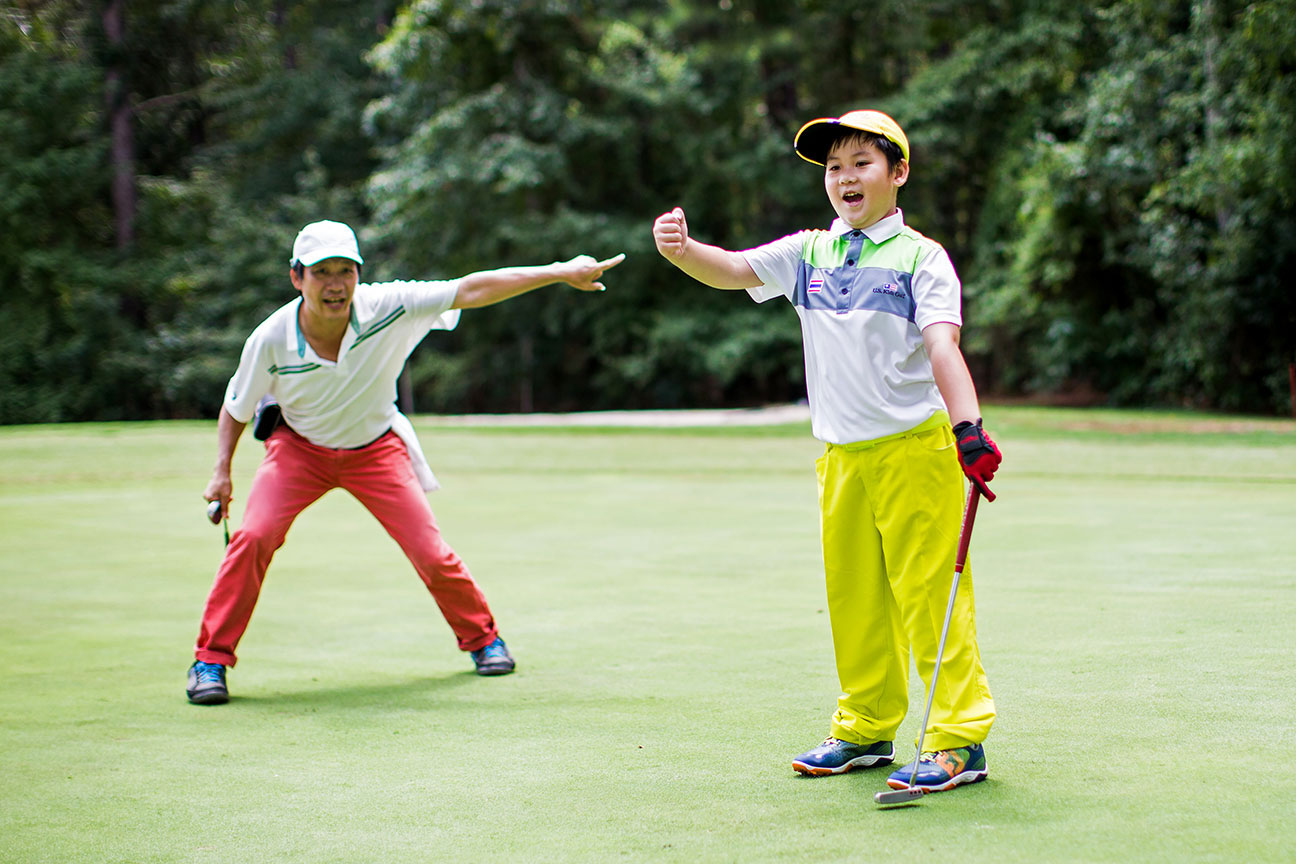 Ajalawich Anantasethakul of Phitsanulok, Thailand birdies a putt during a practice round as his father celebrates. This was a preview of what was to come, as Ajalawich finished third in the 6-and-under group. 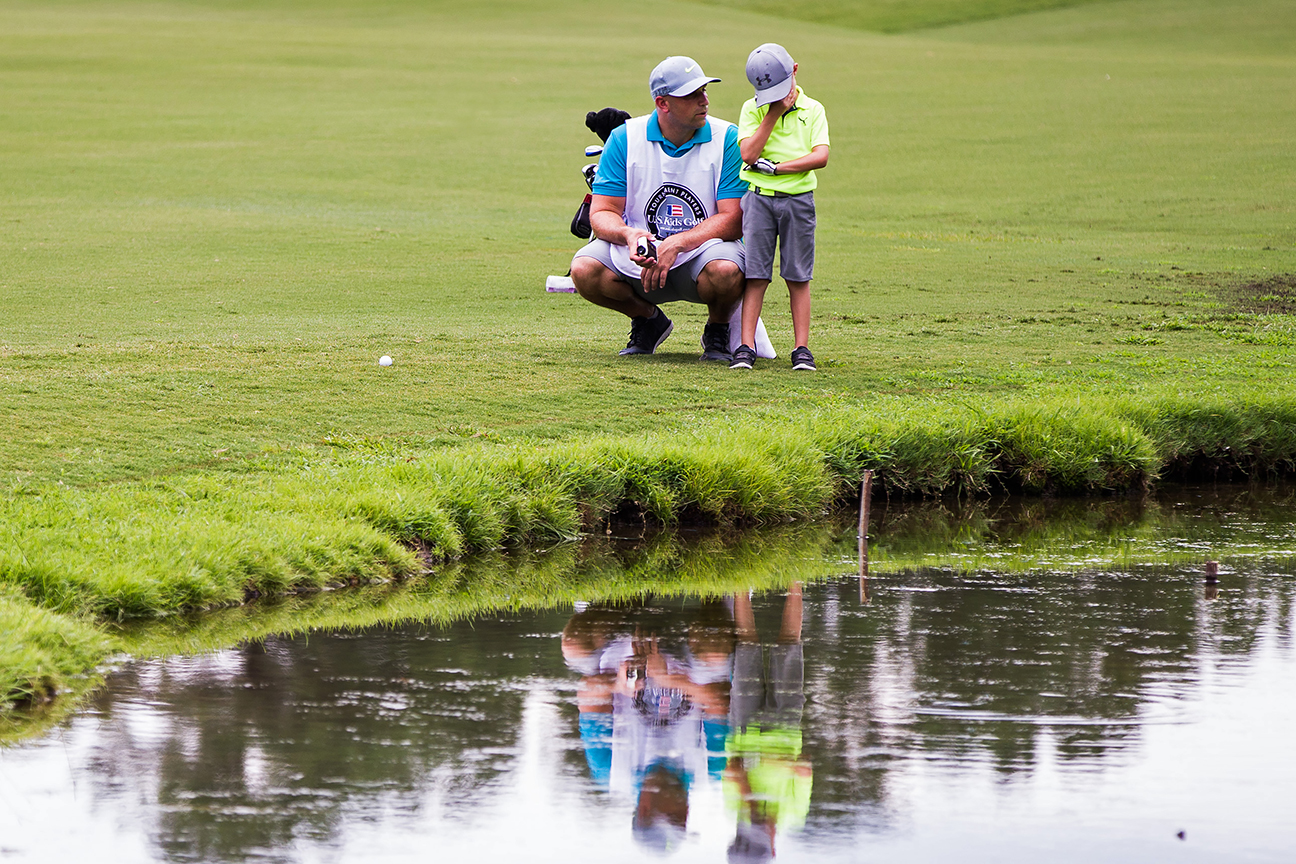 Christian Adel talks to a frustrated Isaiah after his tee shot lands in the water on the 9th hole of the second round and Isaiah is forced to take a drop shot. He makes every effort to carefully manage the game for Isaiah. "In the end, I just don't want to ruin it for him." 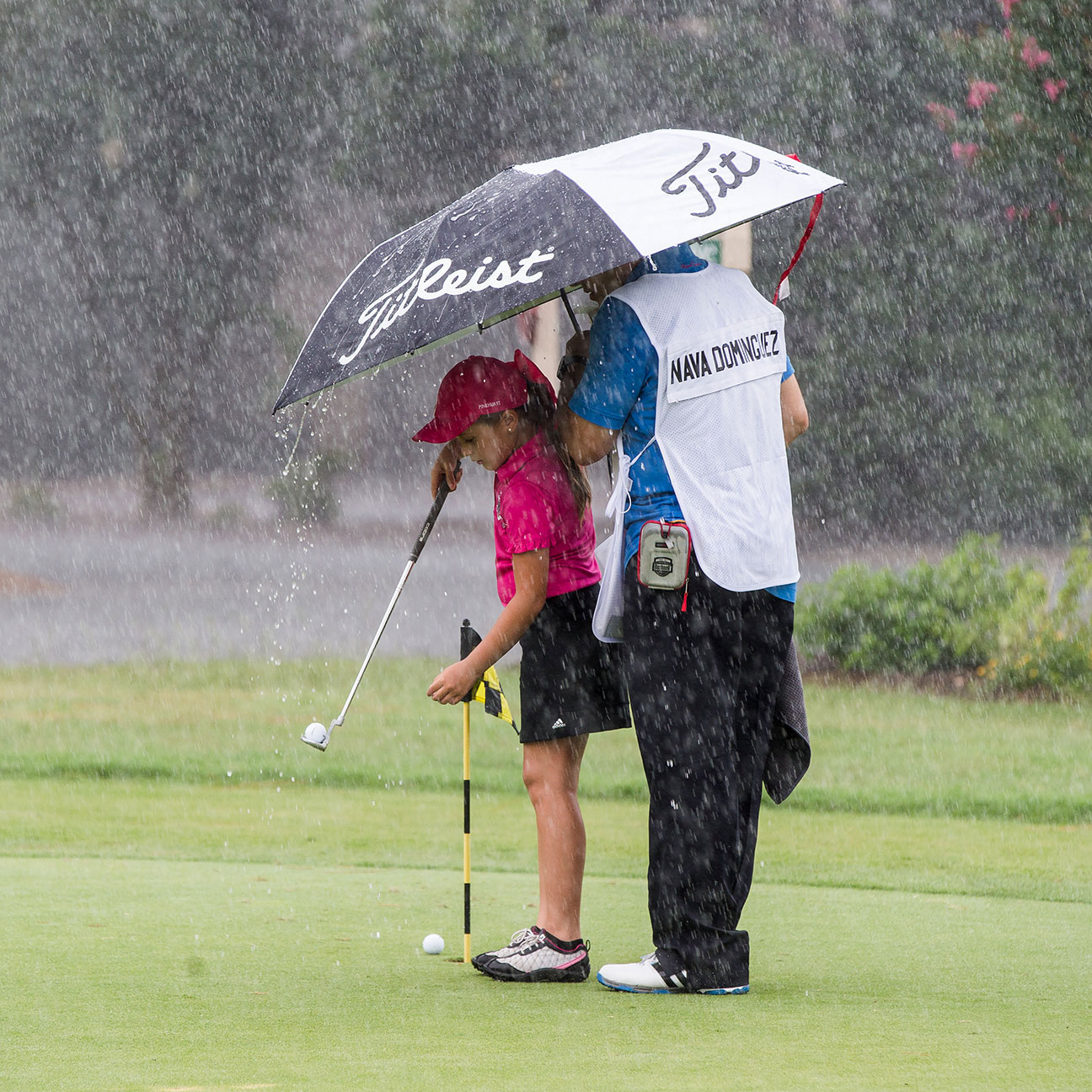 Isabella Nava Dominguez of Queretaro, Mexico is sheltered from the rain by her father, Luis Bernardo Nava, on the putting green. Heavy downpours would pop up during the heat of the North Carolina summer, but that didn't stop the kids from getting in some extra practice strokes. 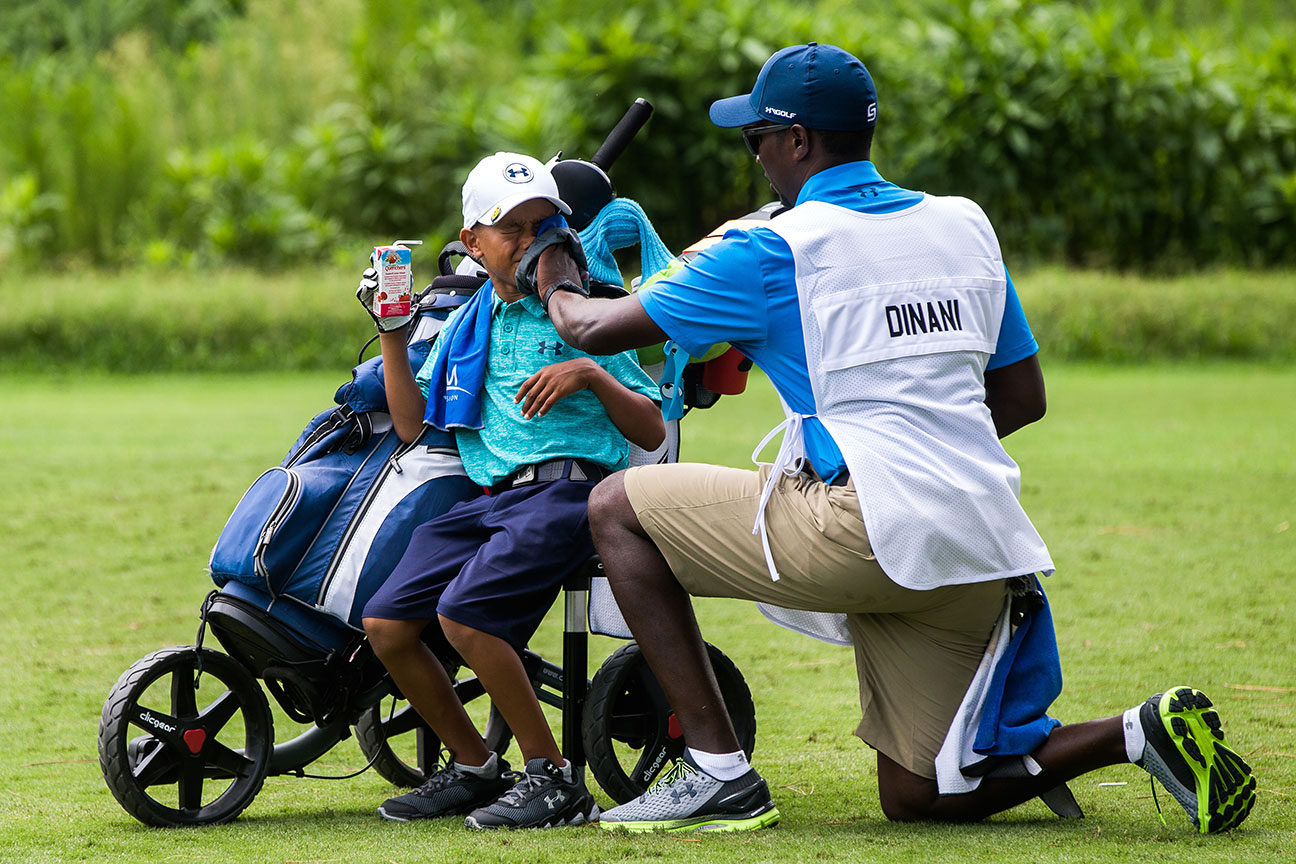 While 7-year-old Aiden Dinani of Upland, California, takes a break to drink a juice box on the 4th hole, his father Mpu wipes his face. 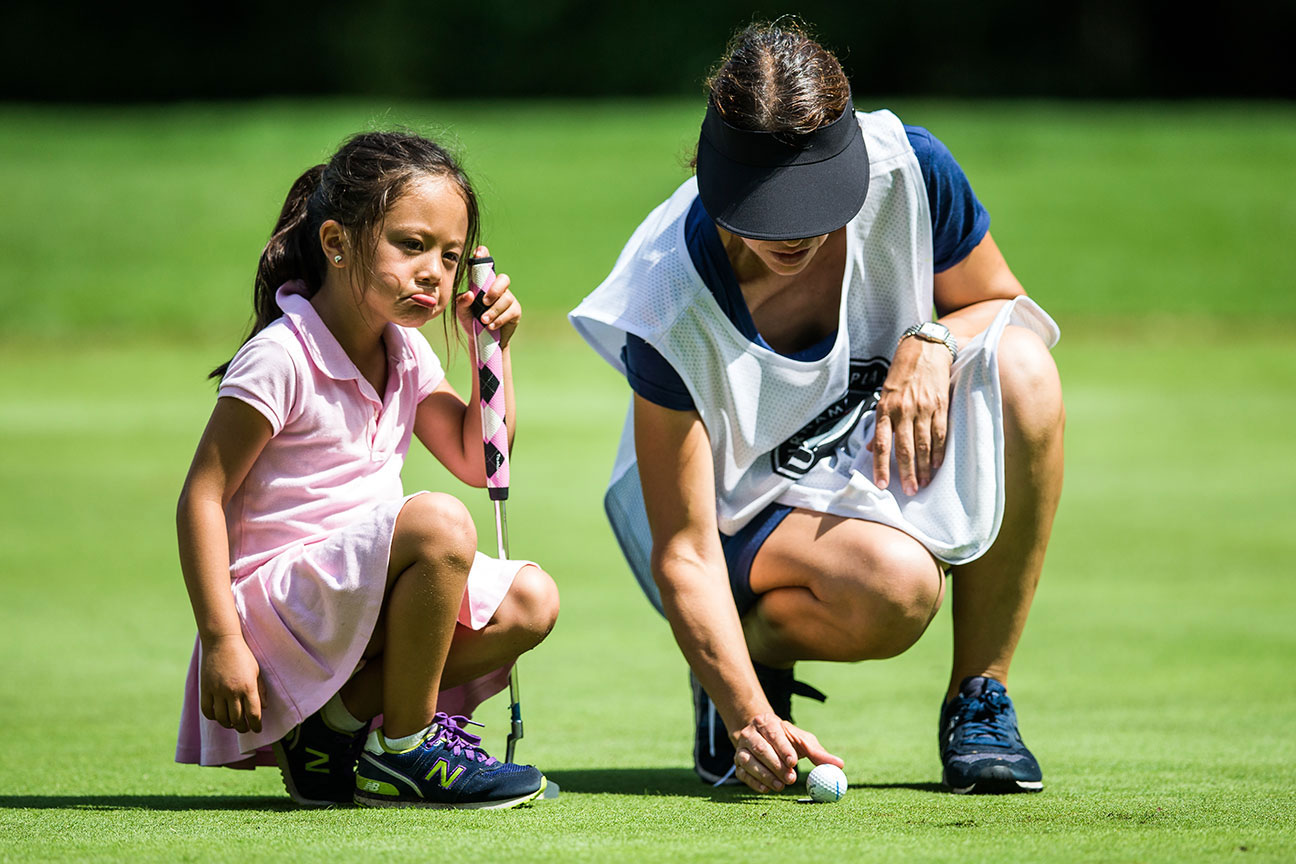 Juno Taino, the youngest player in the tournament, lines up her putt like a seasoned veteran with the help of her mother Diana Spaeda. 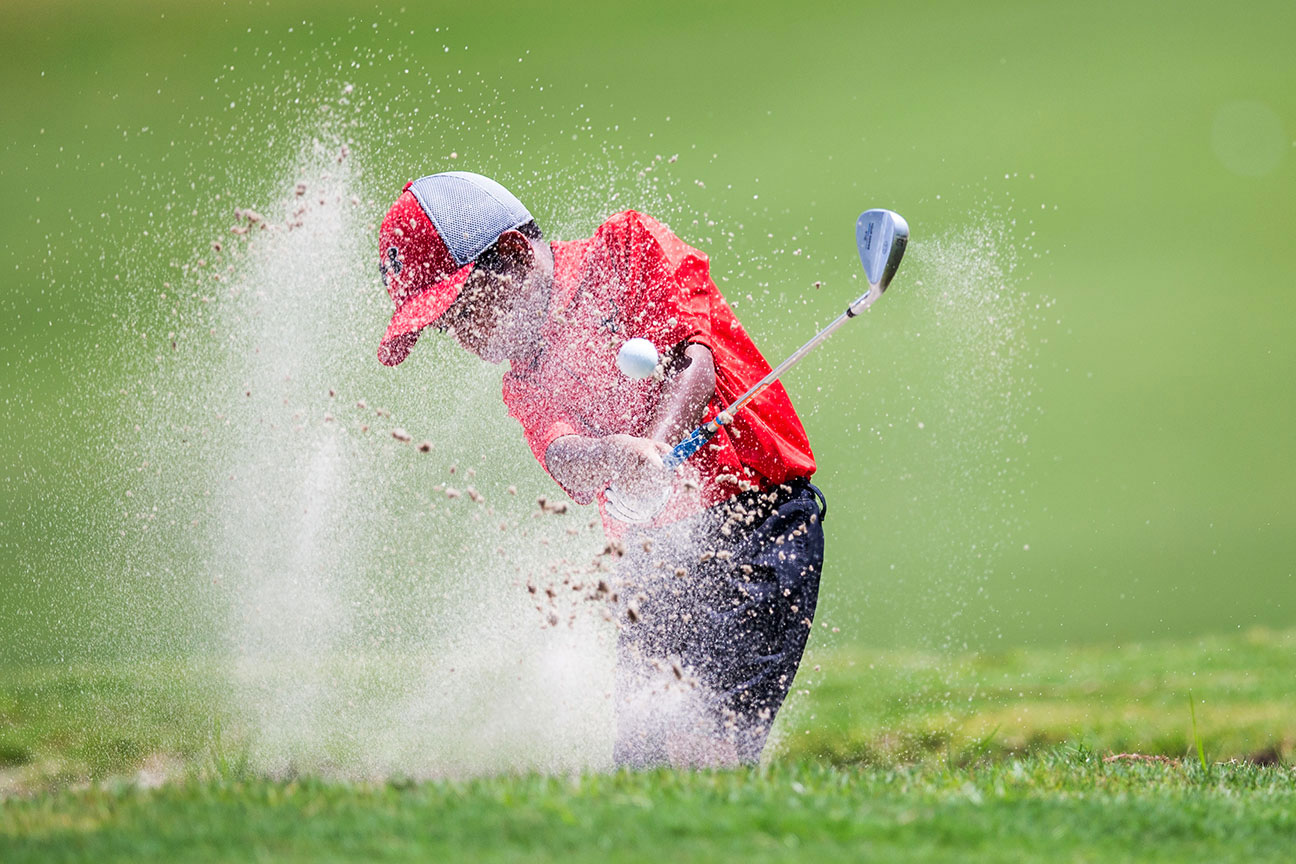 Six-year-old Ayden Febres of Sacramento, California, blasts out of a sand trap on the 6th hole in the second round.

Isaiah Adel and Ariel Collins shake hands after their practice round. While the kids are still learning the nuances of the game, most had already grasped the importance of course etiquette and sportsmanship. 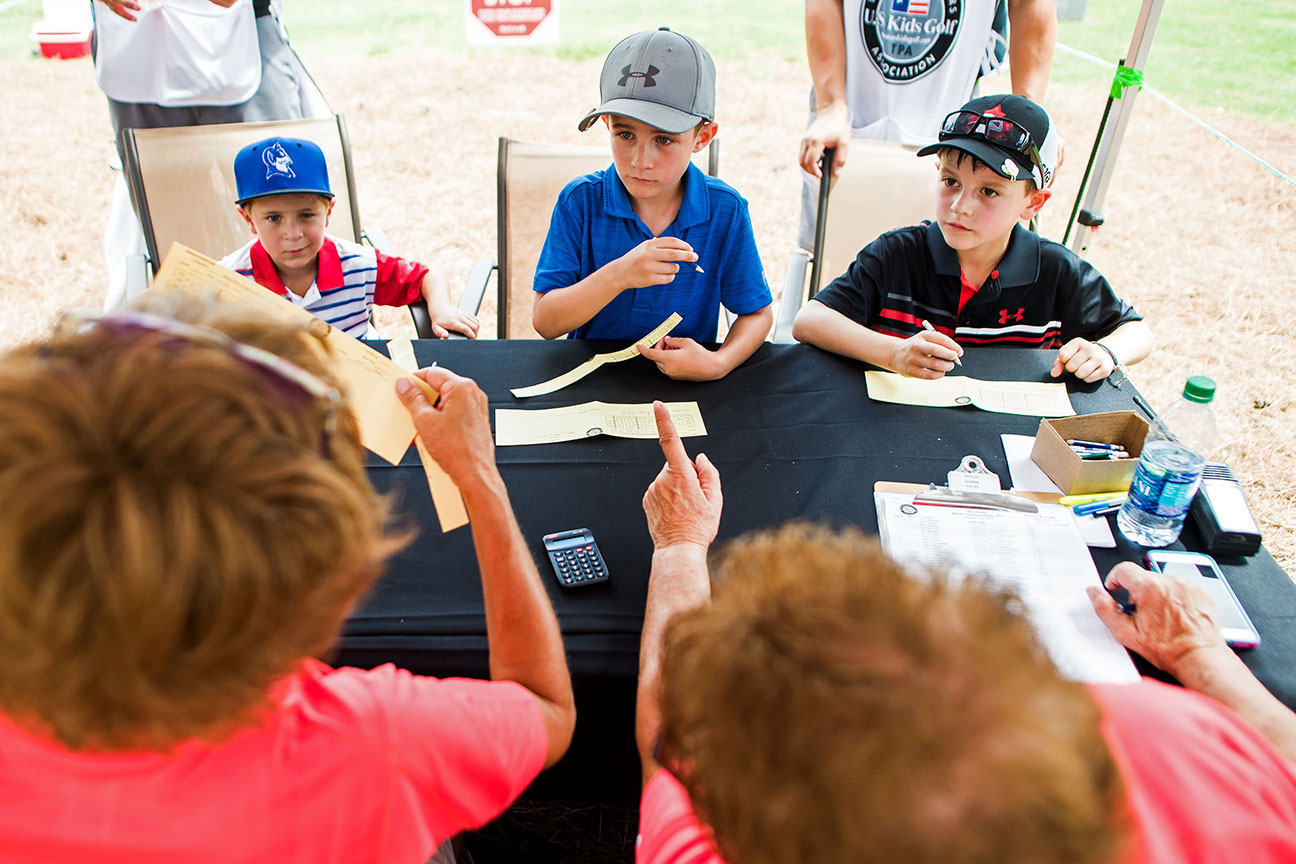 From left, Bronx Esterline, Isaiah Adel, and Grady Anaka listen to instructions at the scorers tent after their first round. Just like the pros, the competitors were required to sign an accurate scorecard after each round, keeping track of their own play, as well as their competitors. 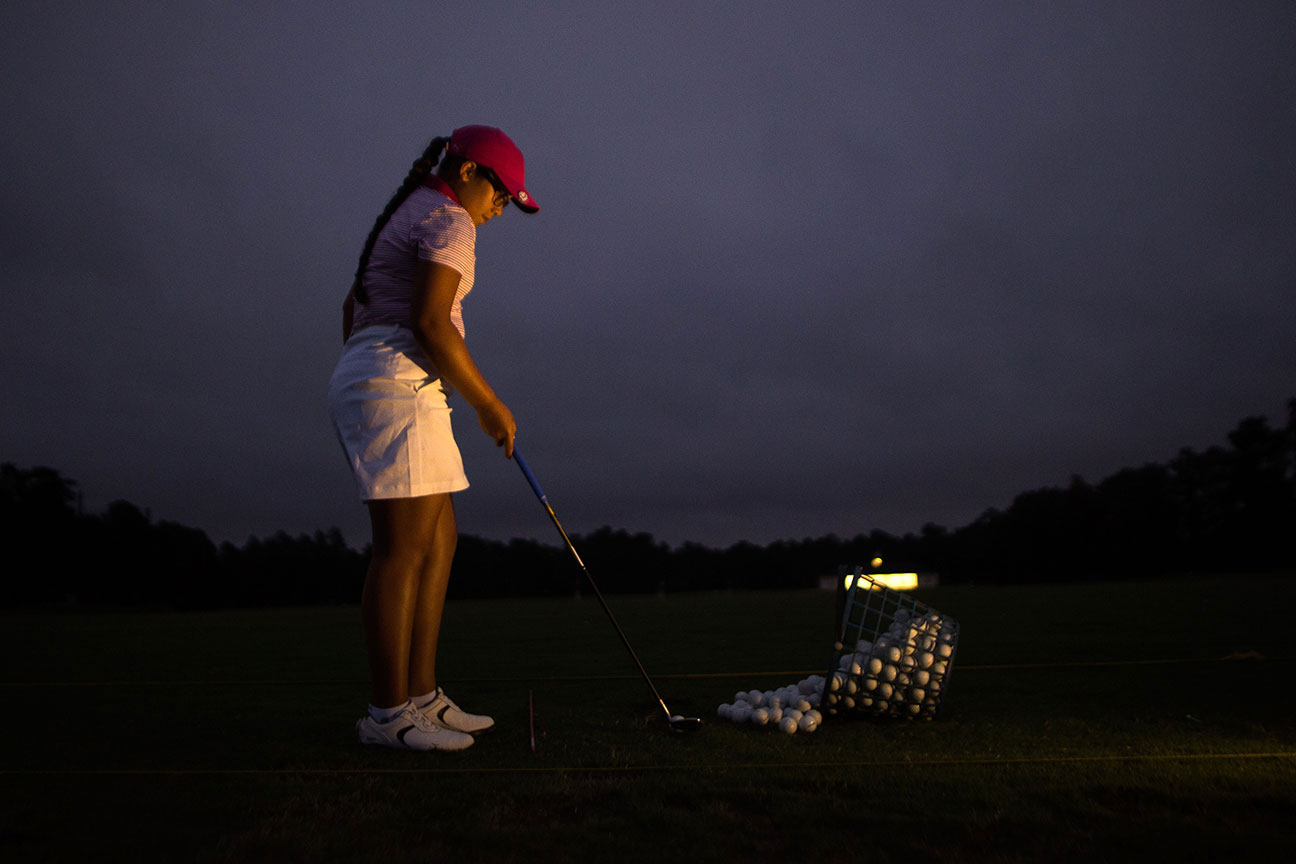 Izzy Pellot, an 11-year-old from Apopka, Florida, likes to start her day at 6 a.m. on the driving range. She has this same routine back home, and starts even earlier on school days. With drives that travel over 250 yards, she currently is being recruited by colleges in the SEC. 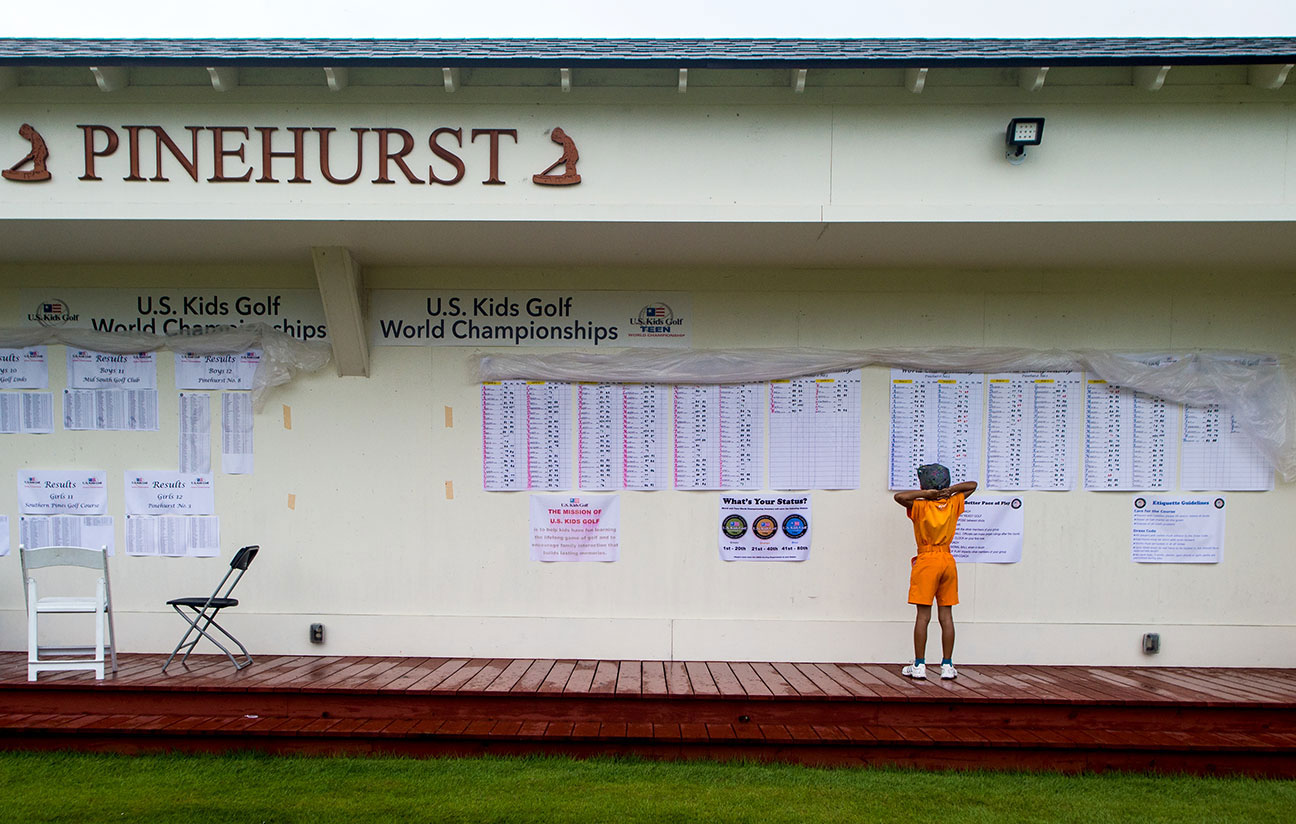 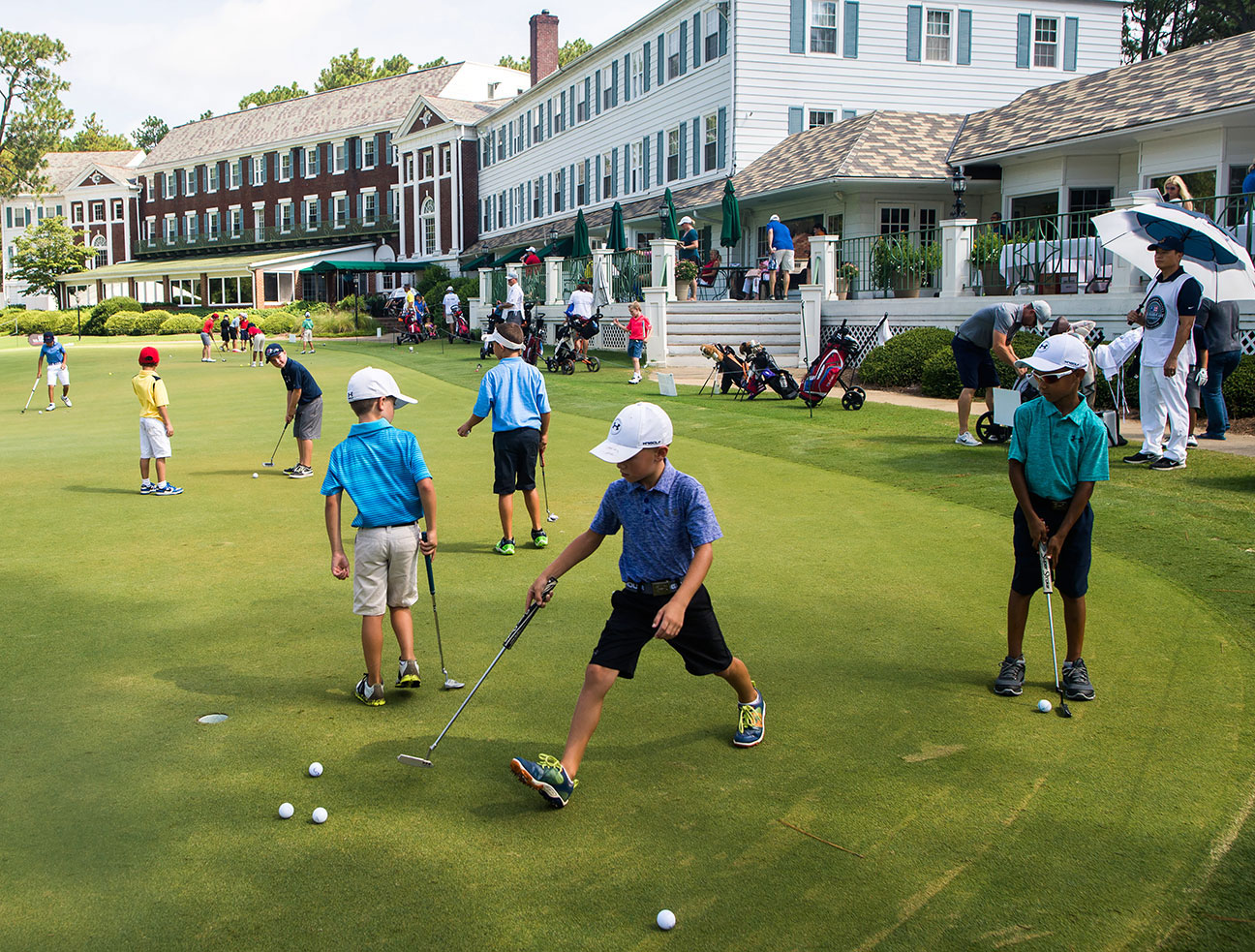 All dressed up and ready to play, a collection of young golfers crowd around the putting green. 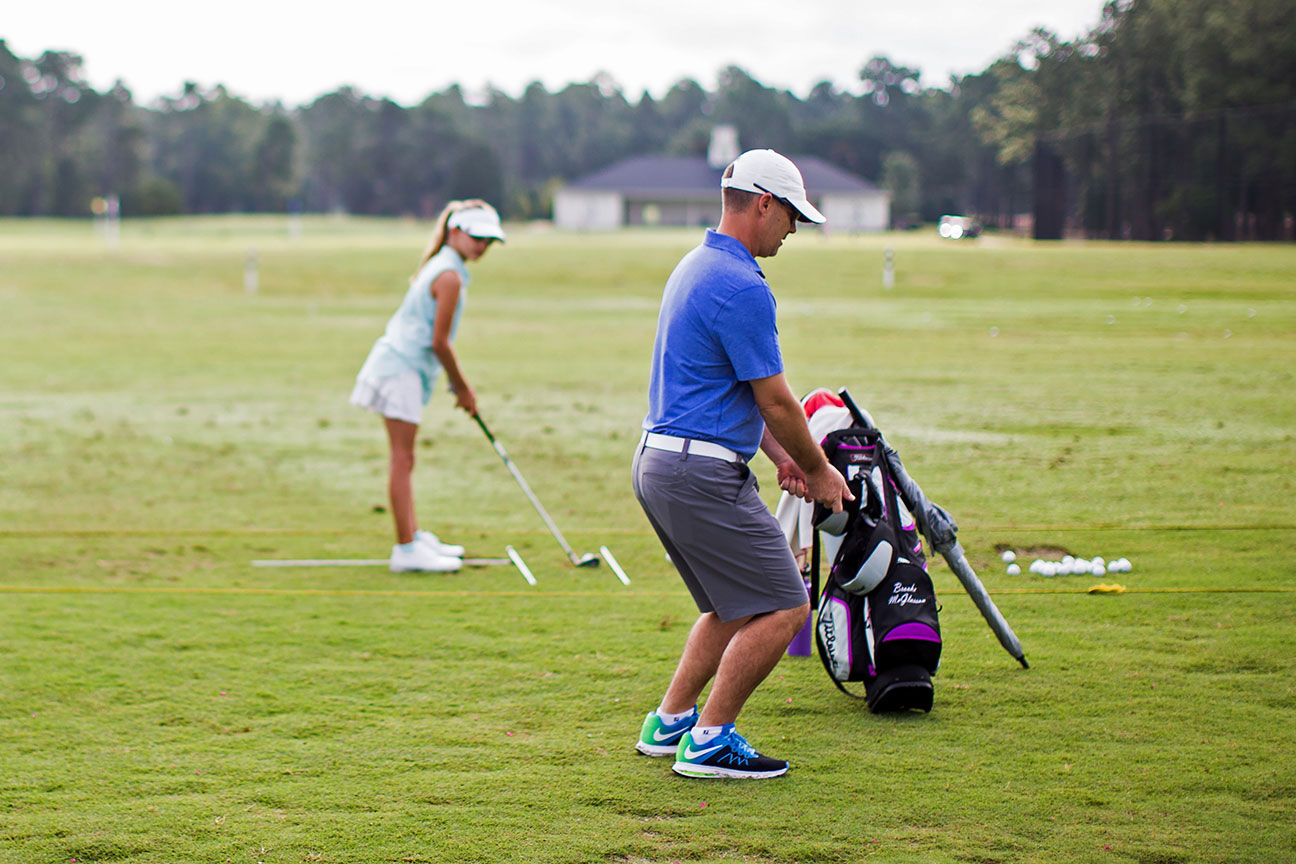 Eleven-year-old Brooke McGlasson from Peoria, Arizona, works on her mechanics with father Blake. 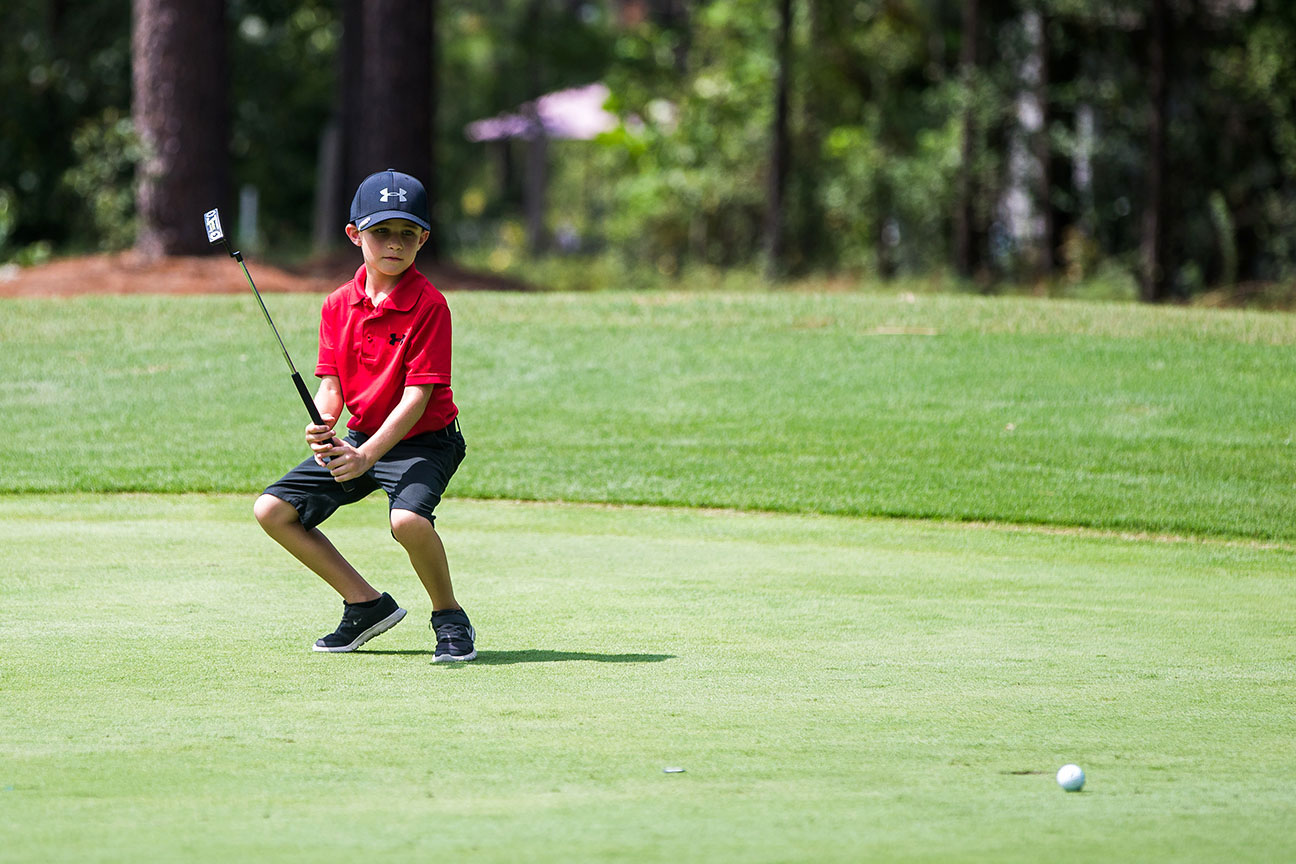 Isaiah Adel tries to will the ball into the hole, but ultimately misses a birdie putt on the 4th green the during the final round of play. He finished 23rd out of 81 golfers in the boys' 6-and-under group. 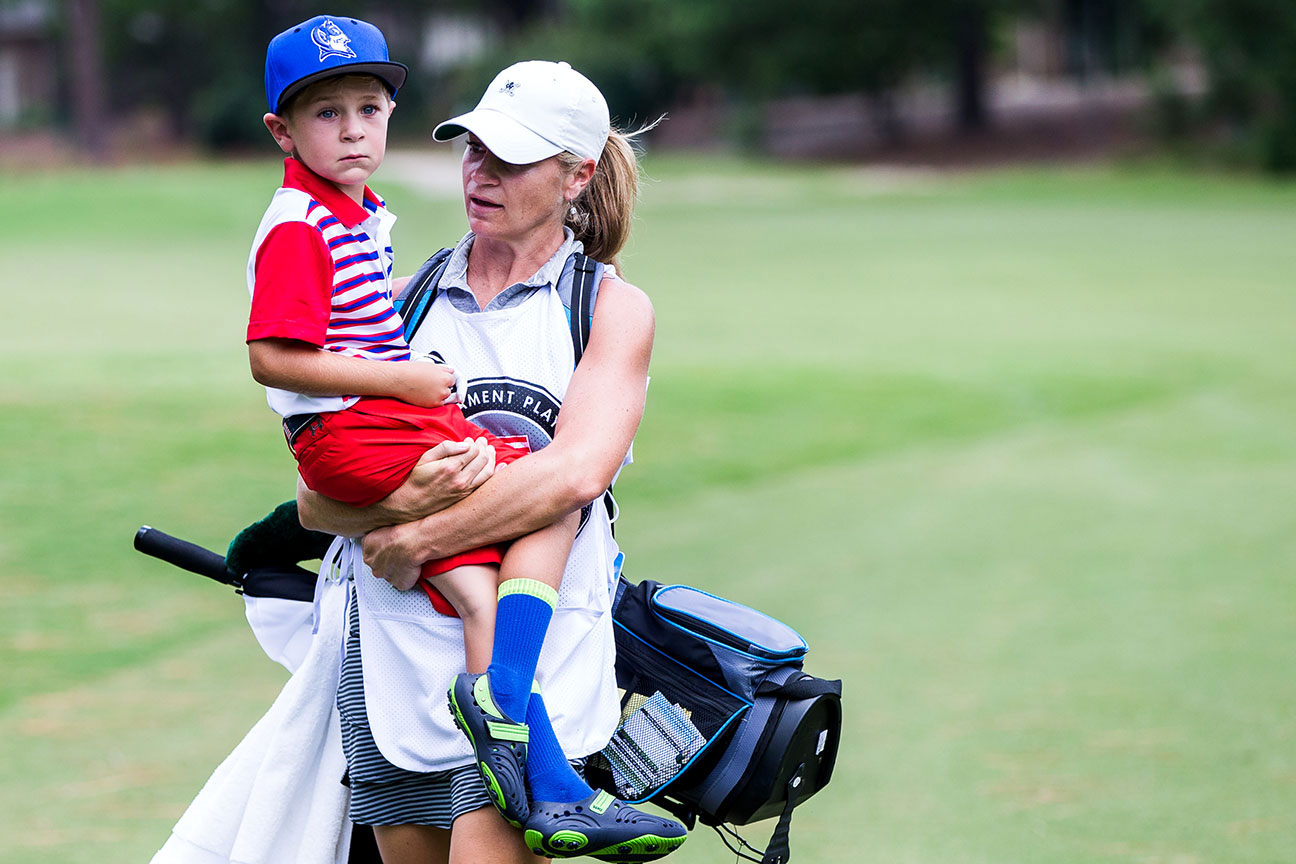 Sabrina Esterline carries her son Bronx up the 7th fairway. She suggested hitting a 3-wood would help him avoid a challenging second shot, but Bronx insisted on the driver. He ended up in the rough on the right side of the green, but instead of saying, "I told you so," mom gave him a lift to cool him down. 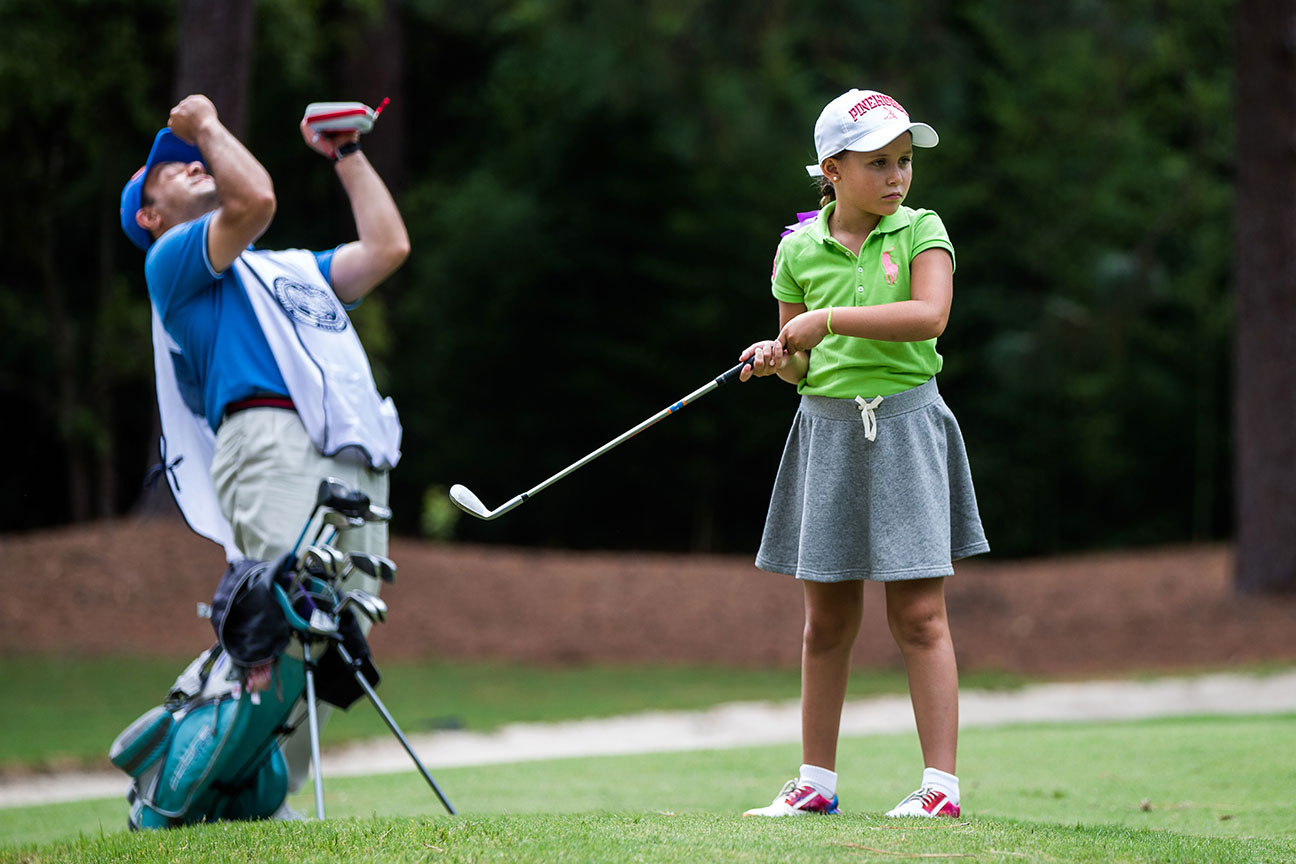 Luis Bernardo Nava reacts to a chip his daughter just missed on the 4th hole. The parents rode an emotional roller coaster while their children kept their cool. 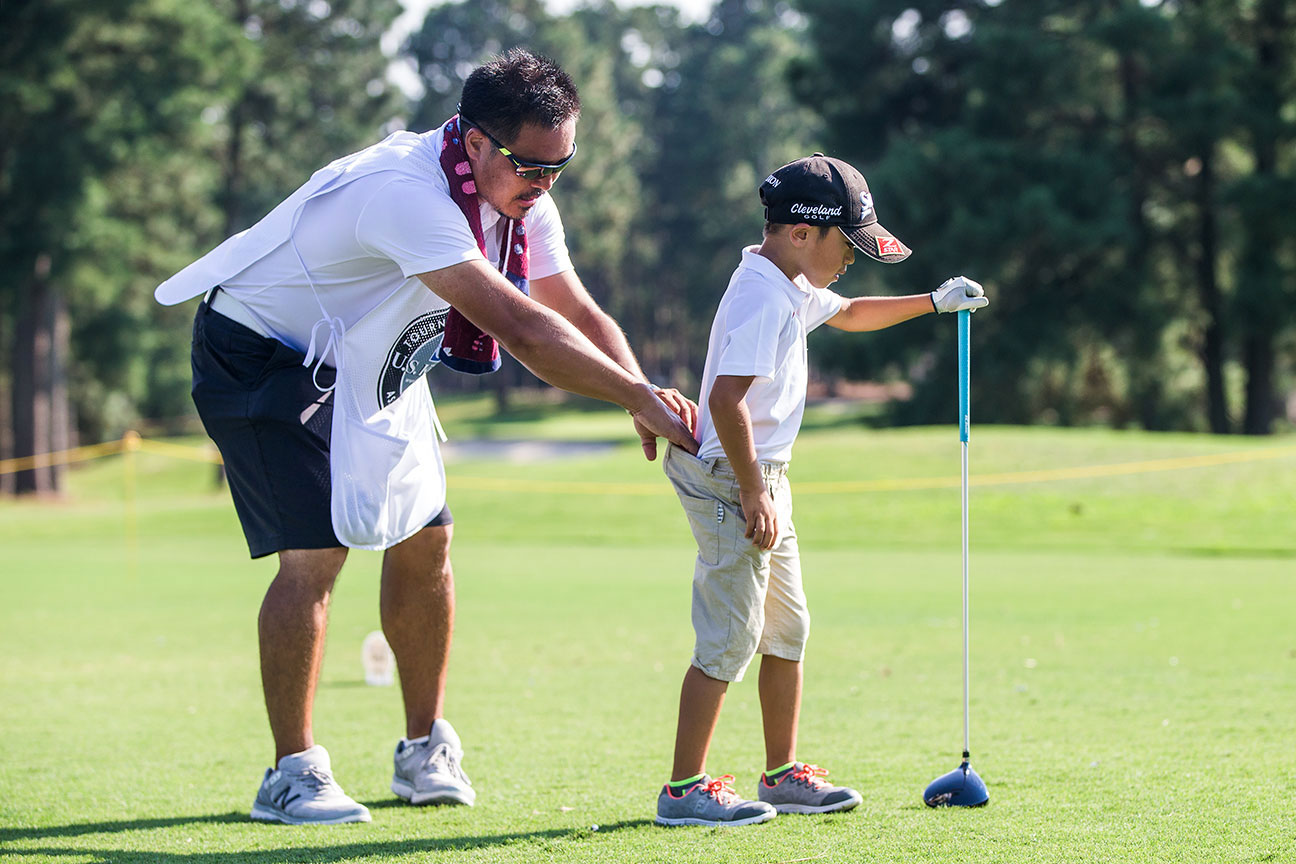 Yuuma Nemoto cruised to victory by shooting 14-under par over three rounds, and his father made sure he looked good doing it.

Ayden Febres didn't play his best golf for much of the second round, but his father Eli kept reminding him to keep his chin up and keep grinding -- valuable and difficult lessons.