had Kelly has big shoes to fill. Simply being an SEC quarterback is tough enough. Being the starting quarterback at the University of Mississippi is next level. There's big-time quarterback history everywhere on campus.

The speed limit is 18 mph, College Football Hall of Famer Archie Manning's number. The team practices at the Olivia and Archie Manning Athletics Performance Center. The team eats at the The Grill at 1810. That's a combination of the numbers worn at Ole Miss by Archie Manning (18) and son Eli (10), a two-time Super Bowl MVP.

And for Kelly, there's the No. 12 on his wrist. It's the number his uncle Jim wore while taking the Buffalo Bills to four straight Super Bowls. Jim was a master of the no-huddle offense, similar to the one Chad runs.

Then there are the thousands of fans who line the sidewalk on game days at The Grove, Ole Miss' fabled tailgating area, wanting a handshake or a hug, to be favored with a hello or some other form of recognition.

Oxford is a classic small Southern town. There are as many churches as there are bars for the bustling campus. Terrific restaurants. Great style. William Faulkner had a few things to say about the place, writing from his Oxford home of Rowan Oak. Everybody knows everybody. There are no secrets here. It's a good place to be beloved or to escape to when things go wrong.

Alabama rolls into town Saturday looking to cause some problems for the 19th-ranked Rebels. Kelly hopes to keep them at bay. 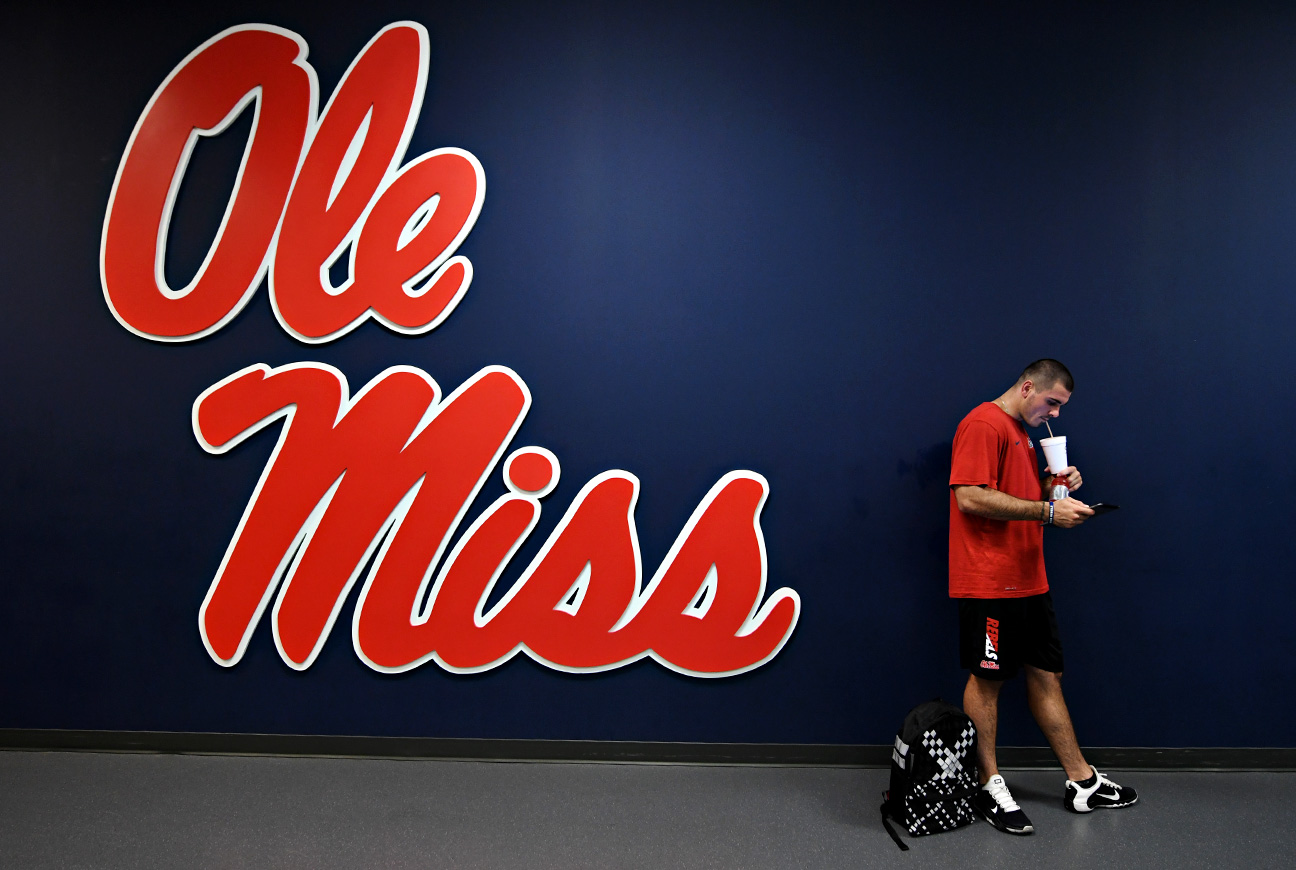 Chad Kelly checks his email outside the Ole Miss locker room at the Archie and Olivia Manning Center. 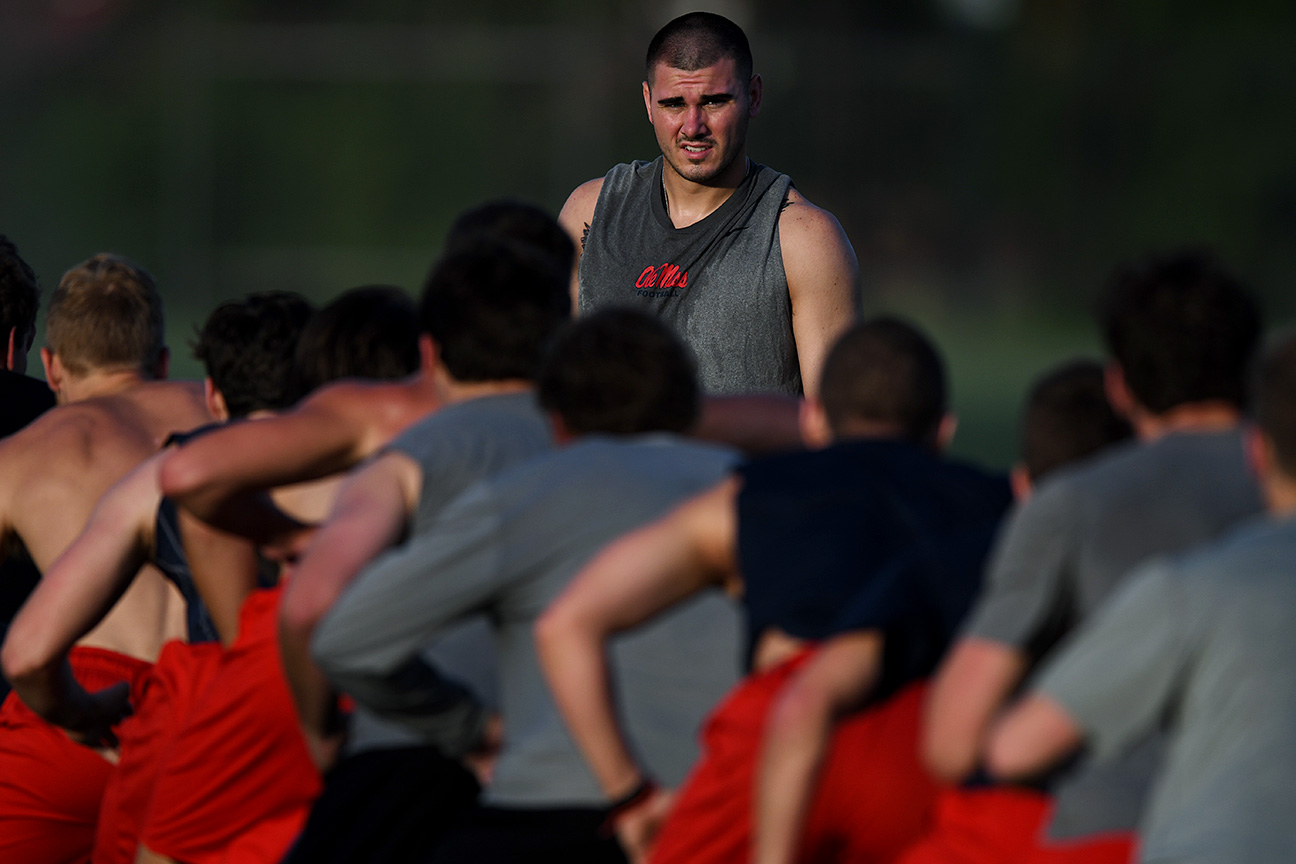 Chad Kelly, the leader of this Ole Miss team, looks on as he and his teammates put in the work on the practice field this past summer. 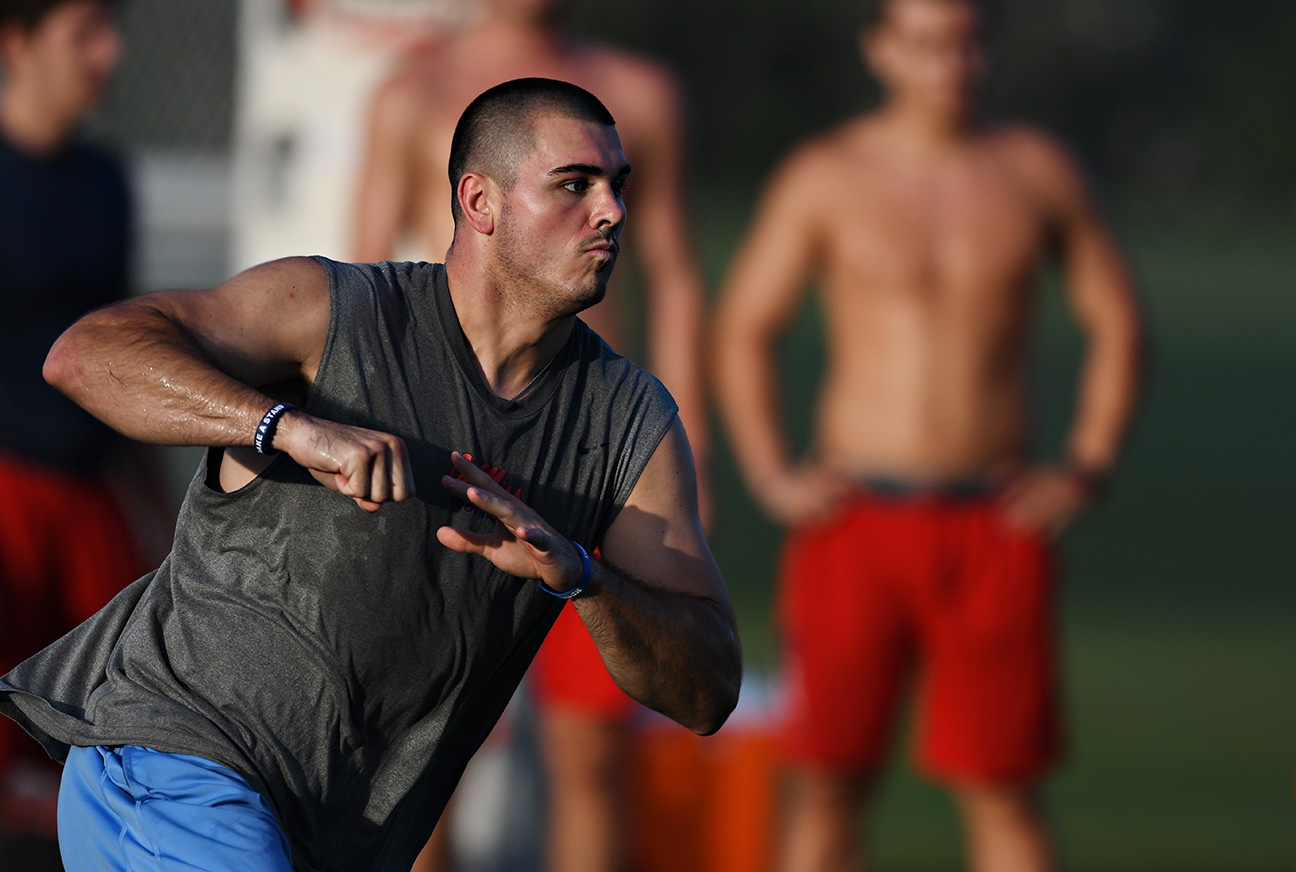 Some of the team's workouts were as early as 6:30 a.m., but Chad Kelly and his teammates showed up ready to work. 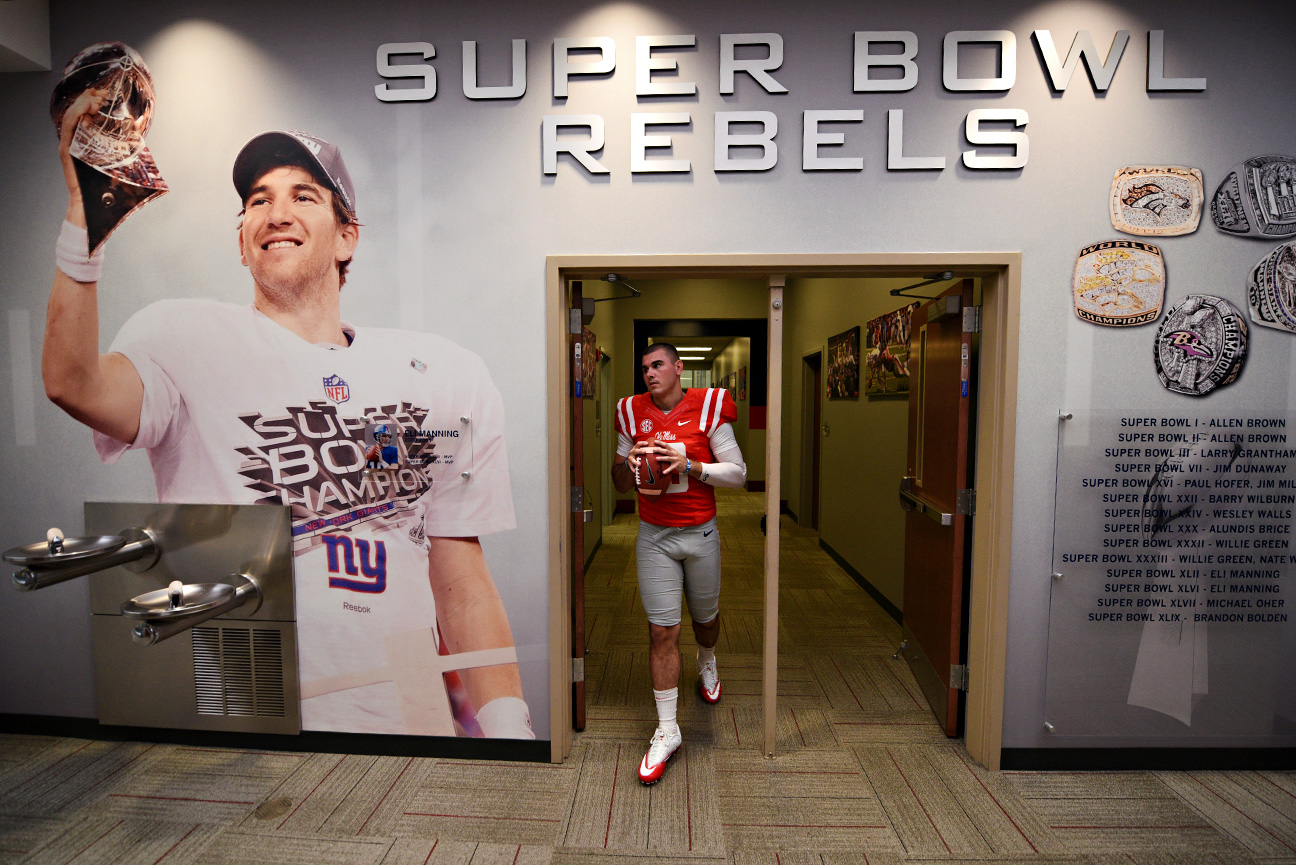 Game ready: Chad Kelly comes out fully dressed for a team photo shoot at the Archie and Olivia Manning Center. 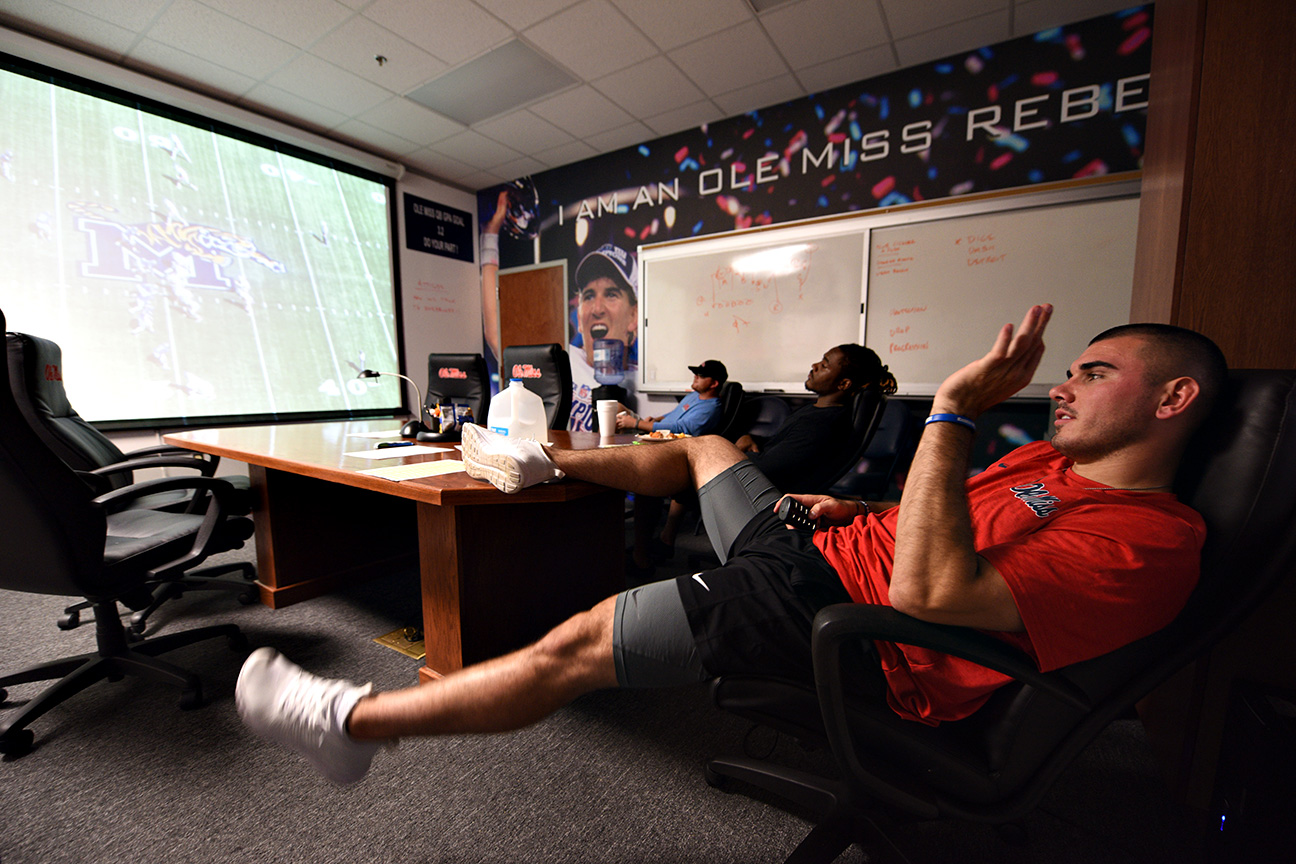 Chad Kelly kicks back and watches some game film in one of the Ole Miss football offices. 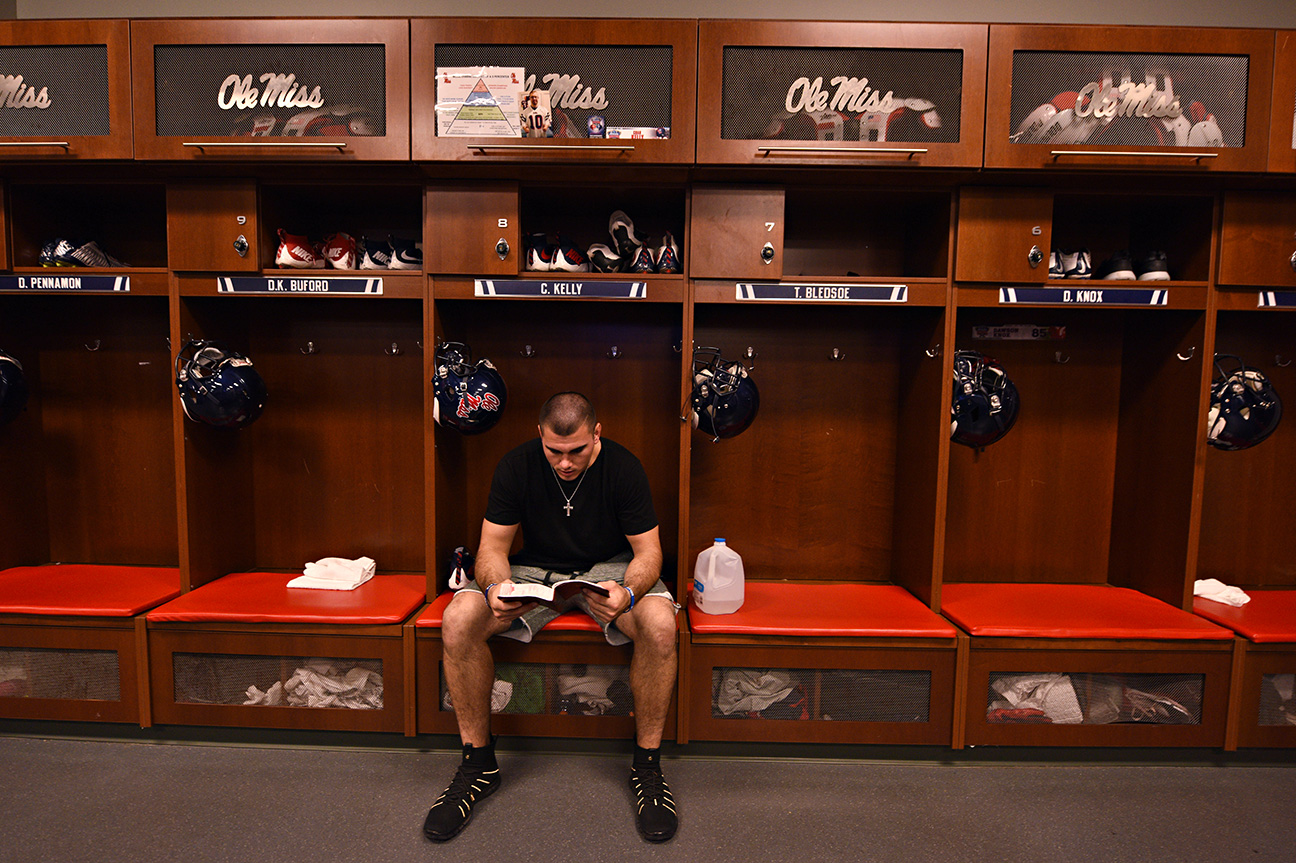 Chad Kelly, who has become a man of faith while at Ole Miss, takes some time away from football to read his bible in the locker room. 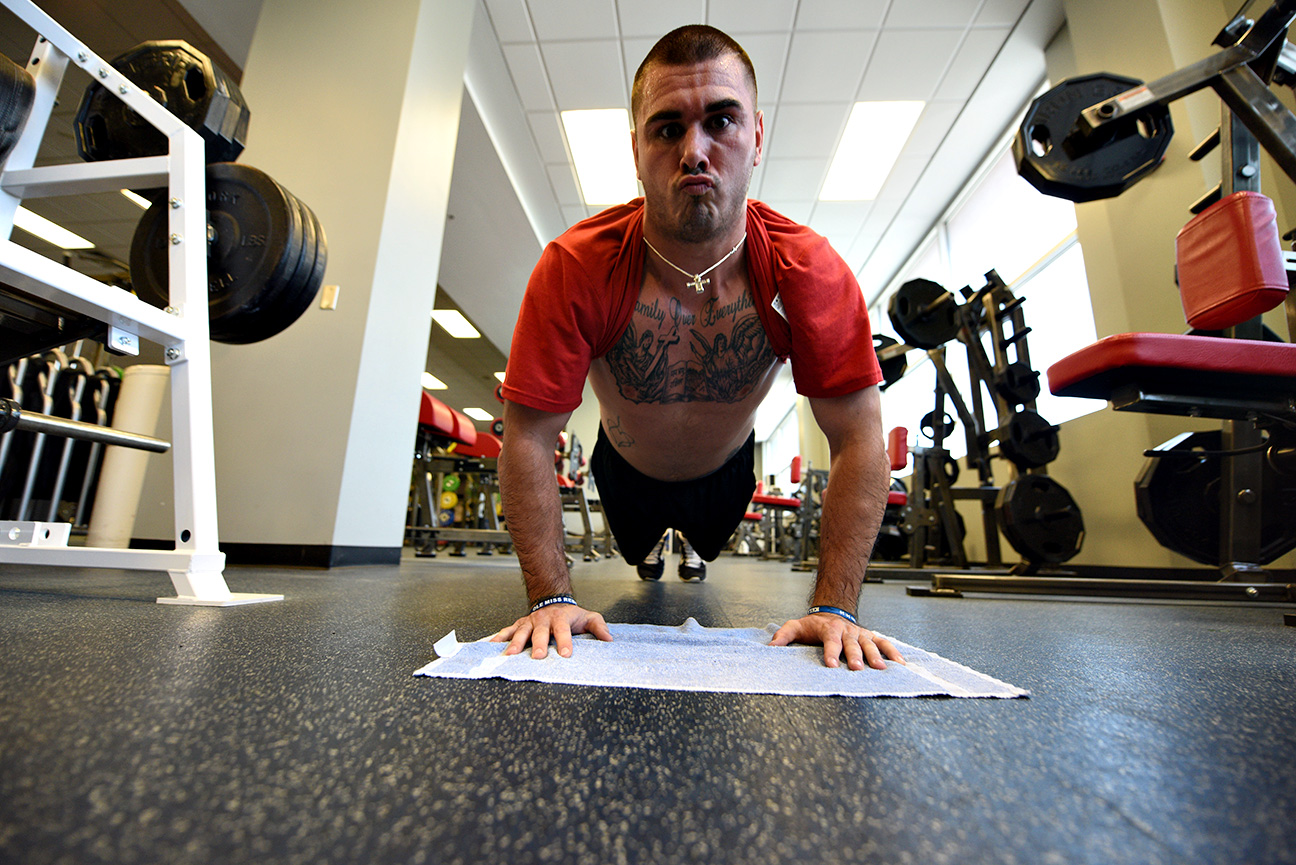 In the weight room, Chad Kelly fights through the pain during an abdominal exercise. 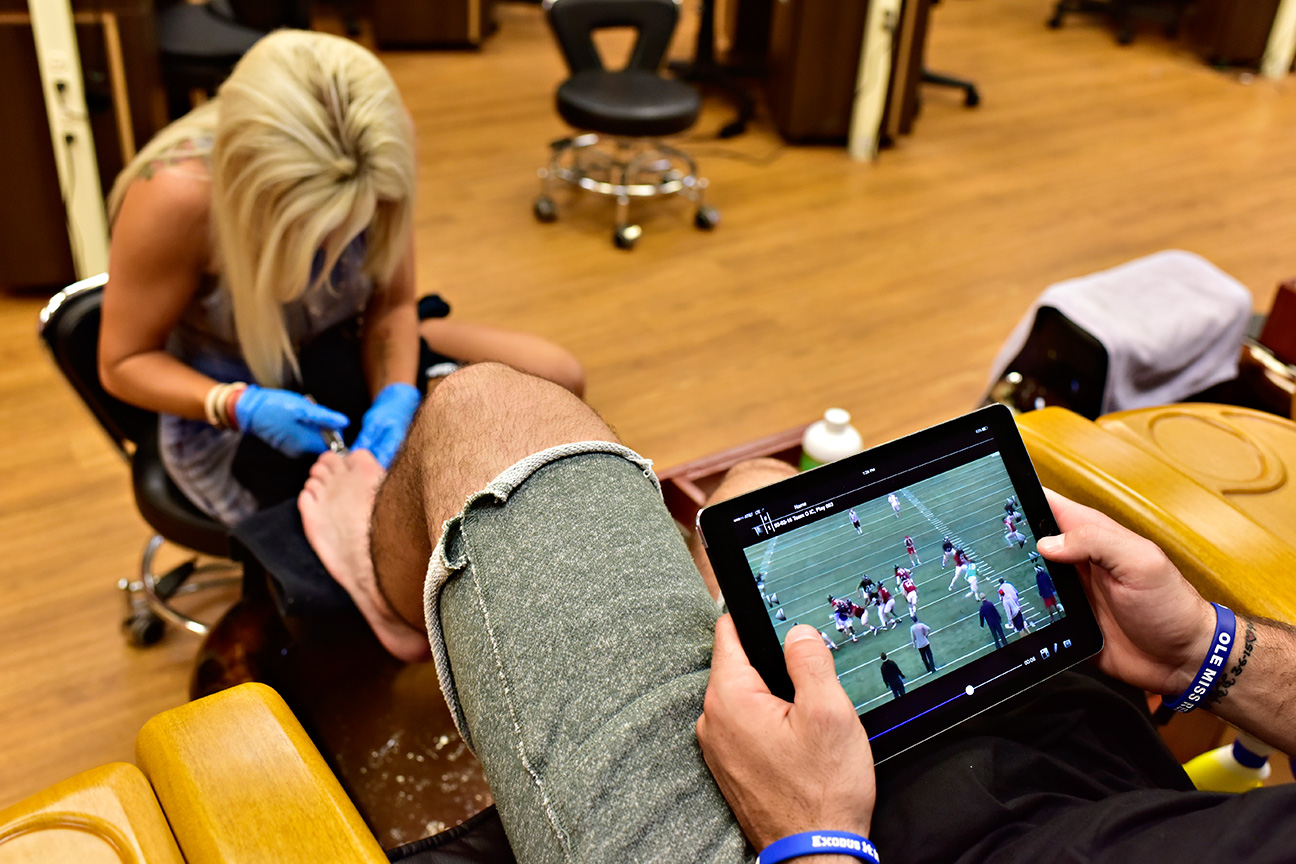 Football and feet: Chad Kelly studies plays on his iPad while he gets a pedicure from Hillary Poe at High Cotton Spa. 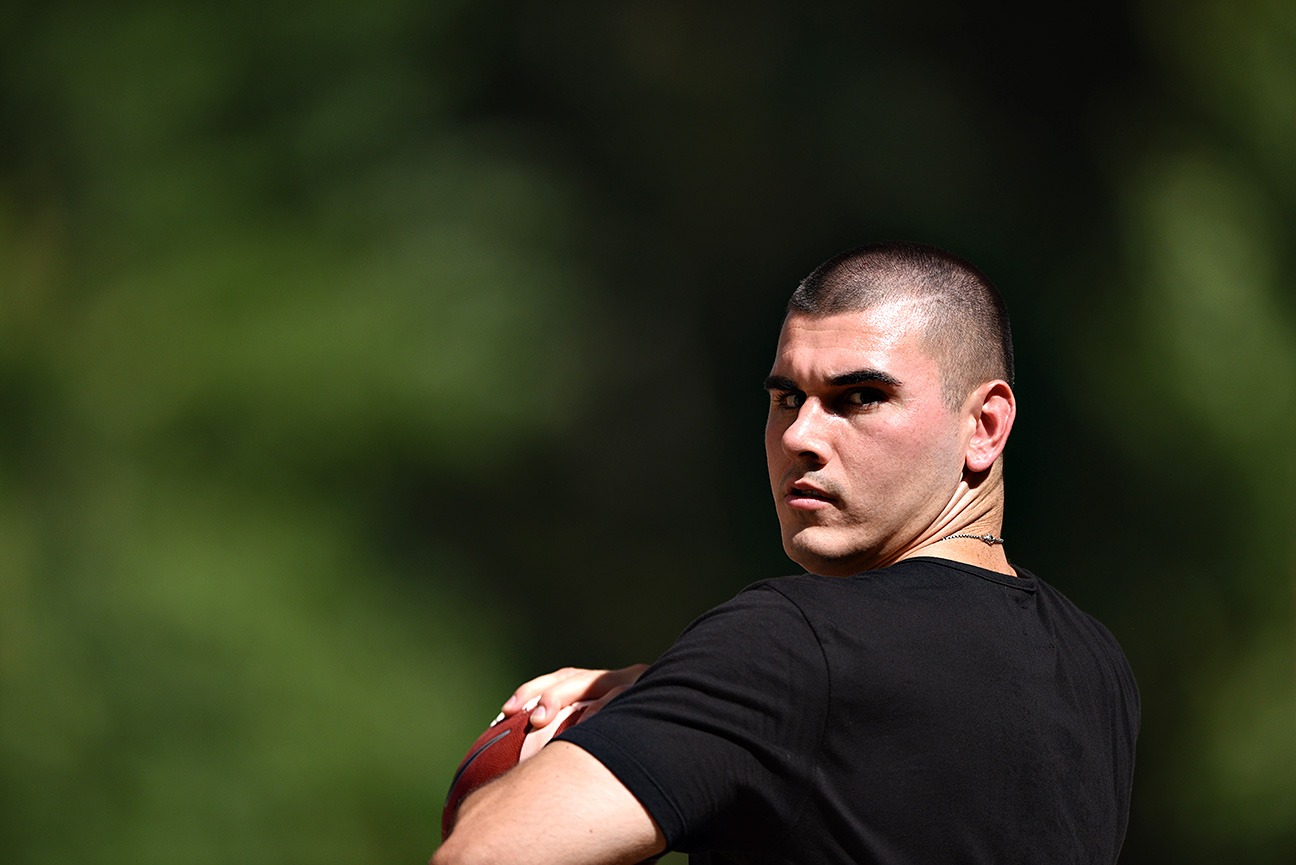 Off the field, Chad Kelly likes to joke around. On the field, he's focused. 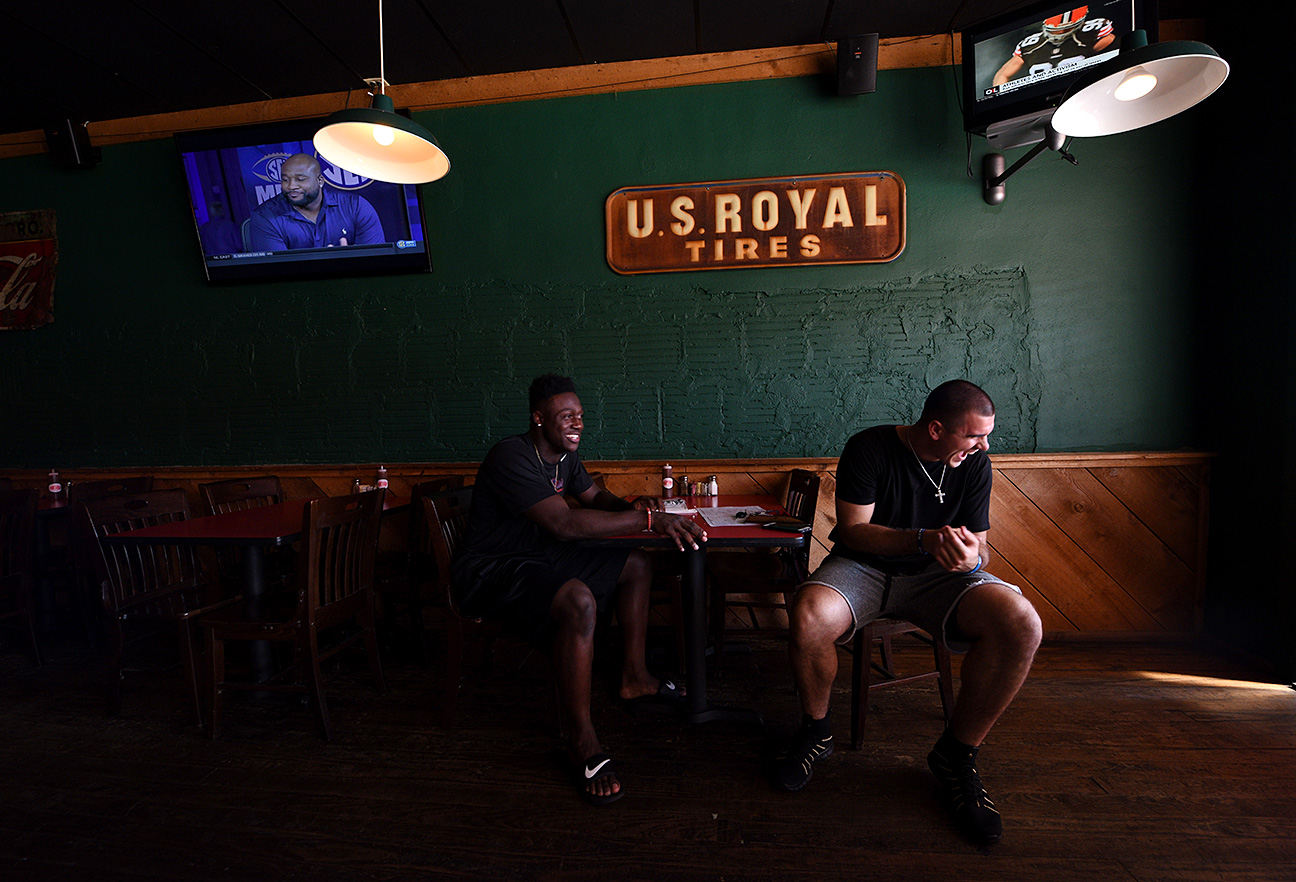 Chad Kelly and freshman wide receiver A.J. Brown share a laugh before having dinner at the Rib Cage in Oxford. 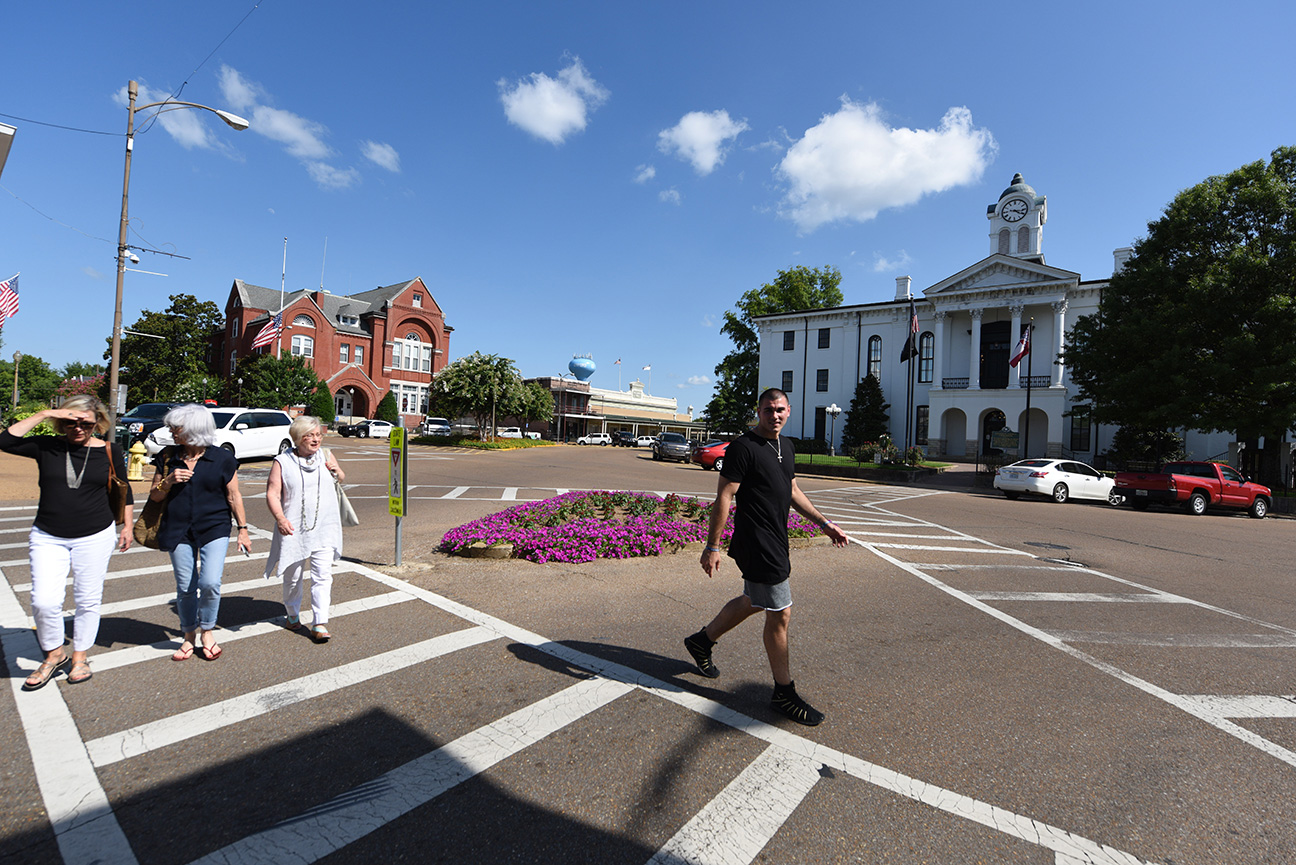 Chad Kelly crosses the Square, the heart of downtown Oxford. 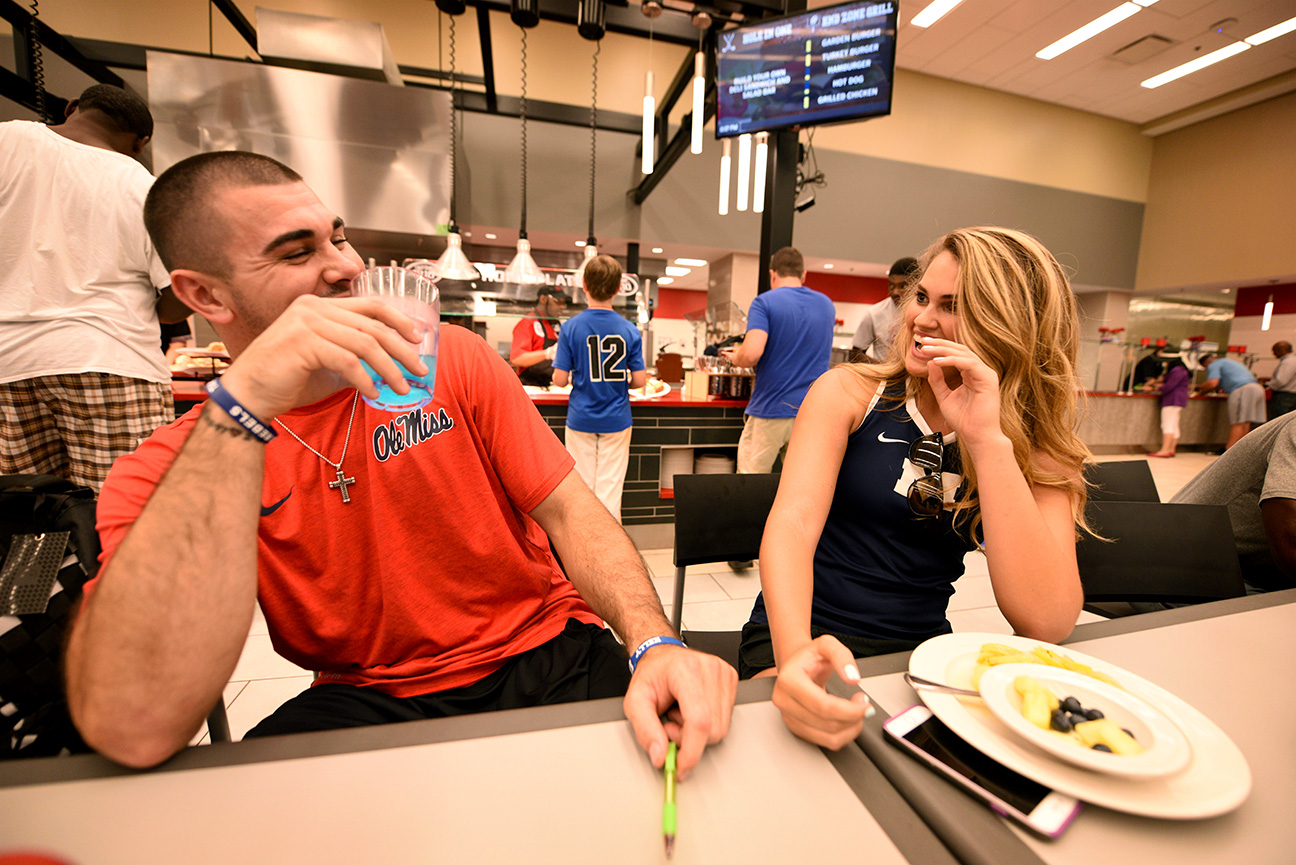 In the Grill at 1810, a popular dining spot for athletes, Chad Kelly enjoys a meal with fellow Ole Miss student Emma Williamson. 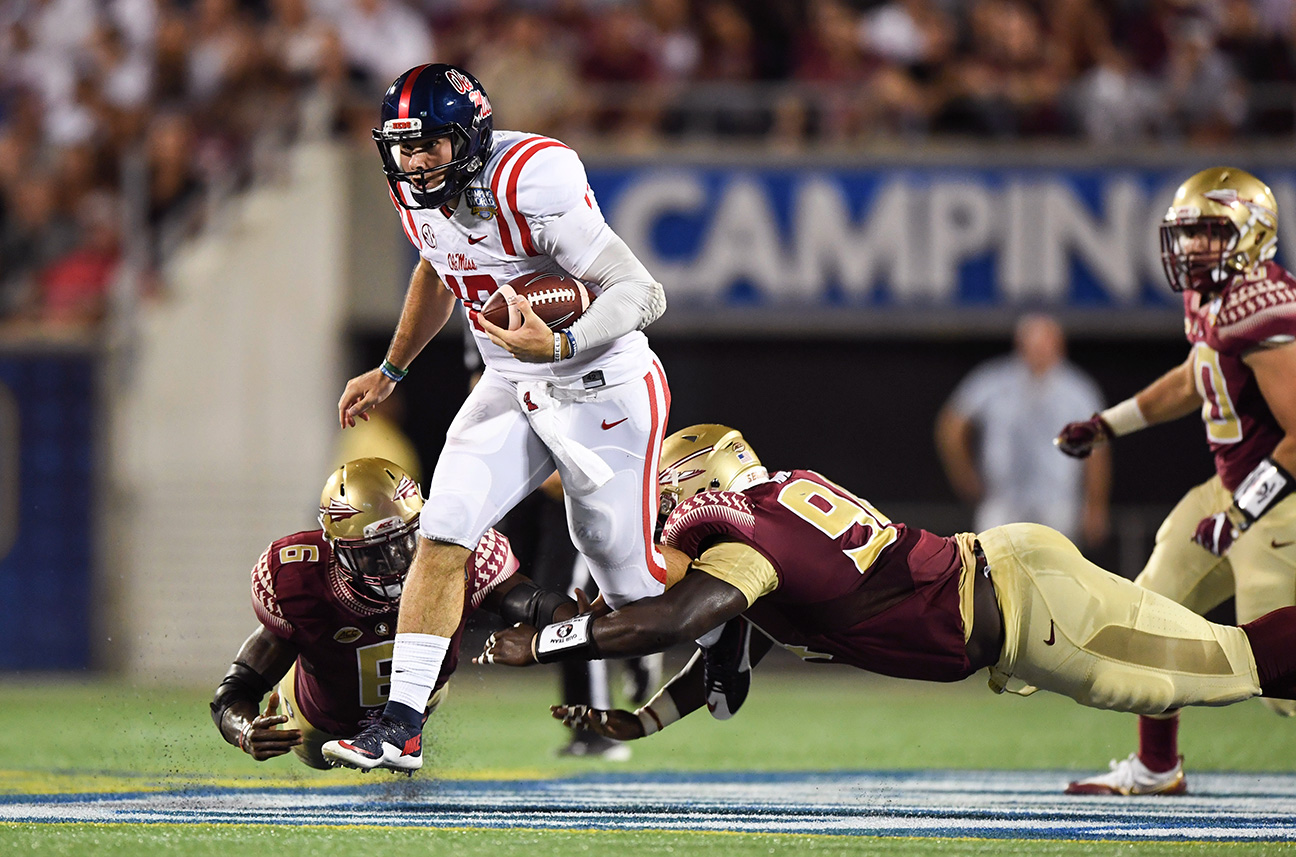 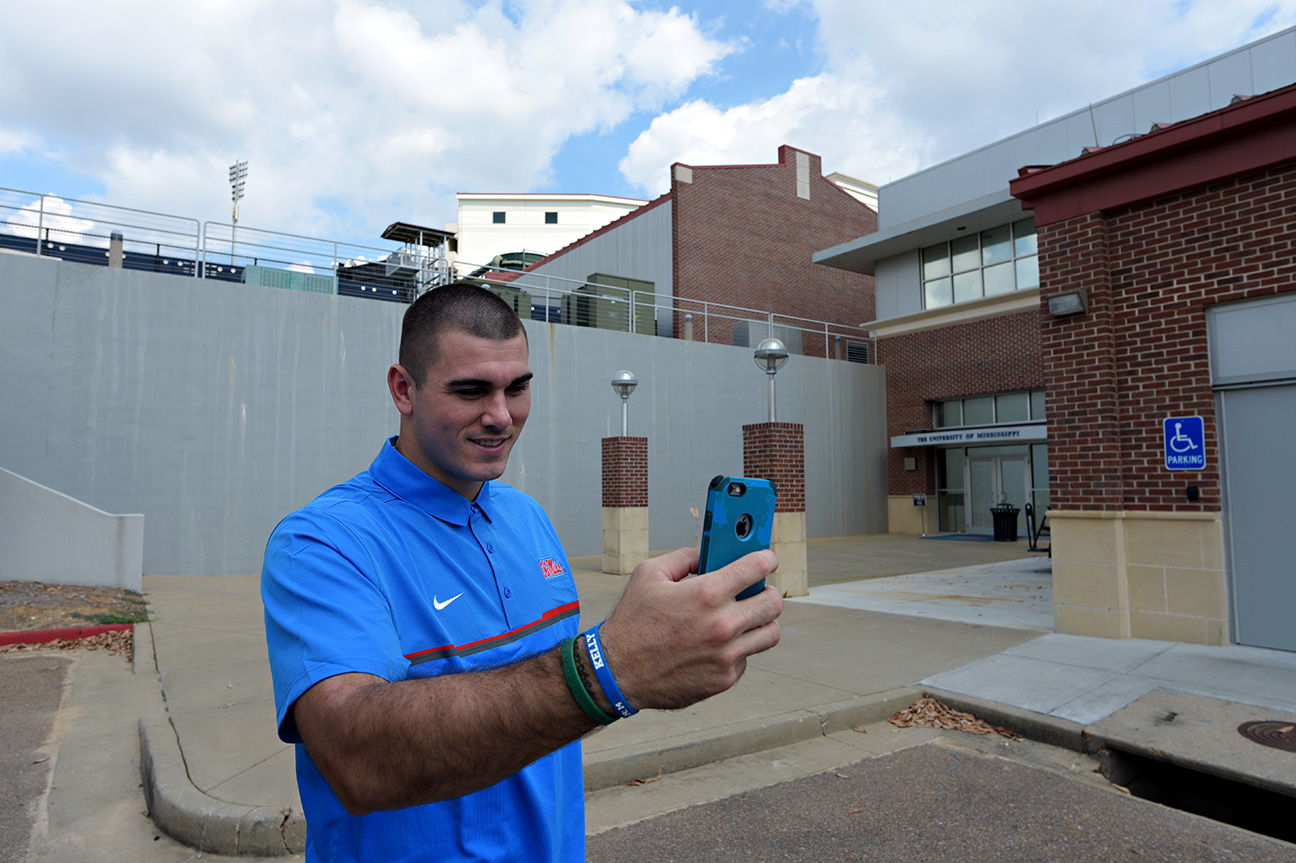 How do I look? Chad Kelly uses Snapchat to offer his thoughts heading into the Wofford game. 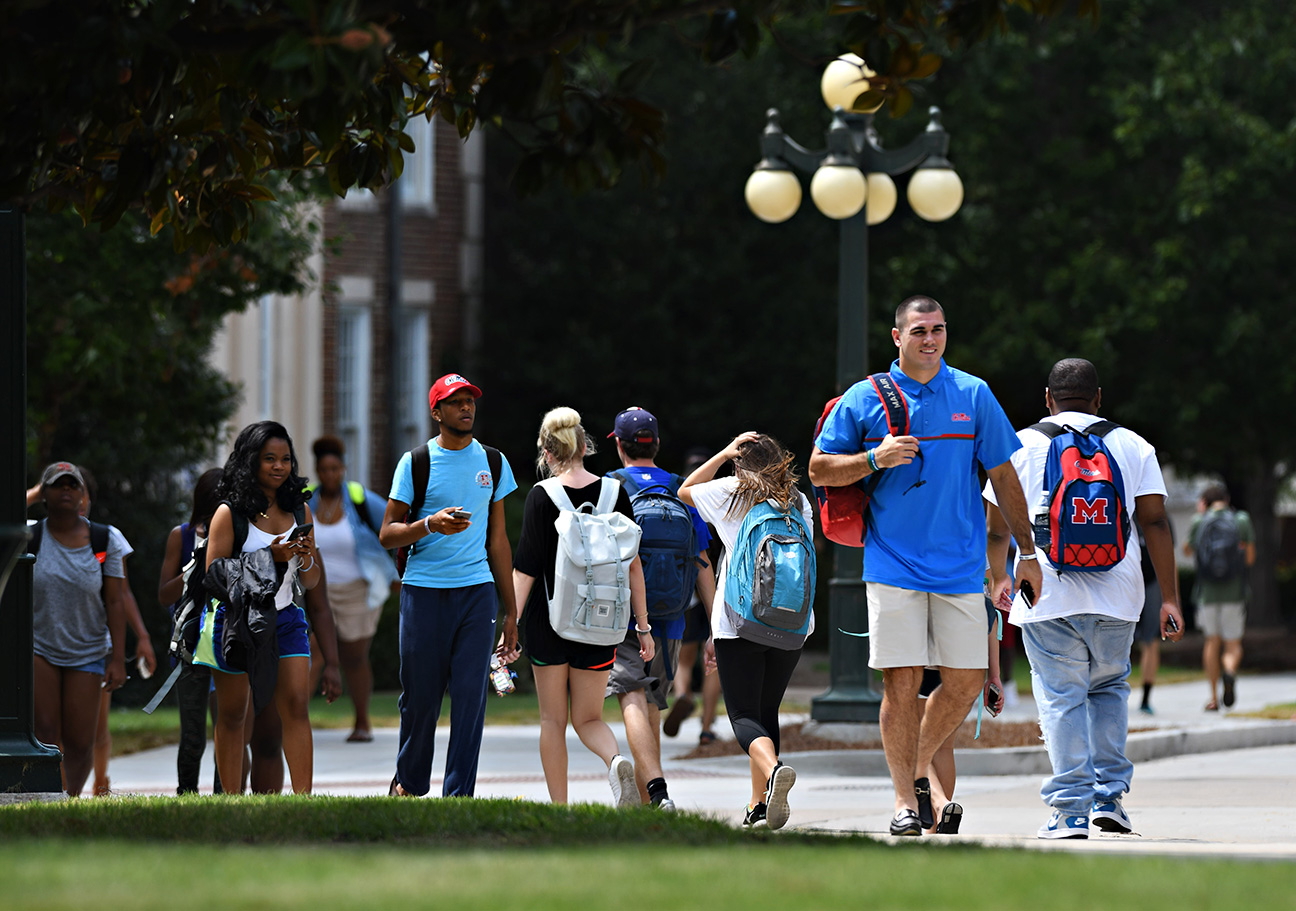 Chad Kelly might be a celebrity on the football field. But he's just another student when he's walking around campus. 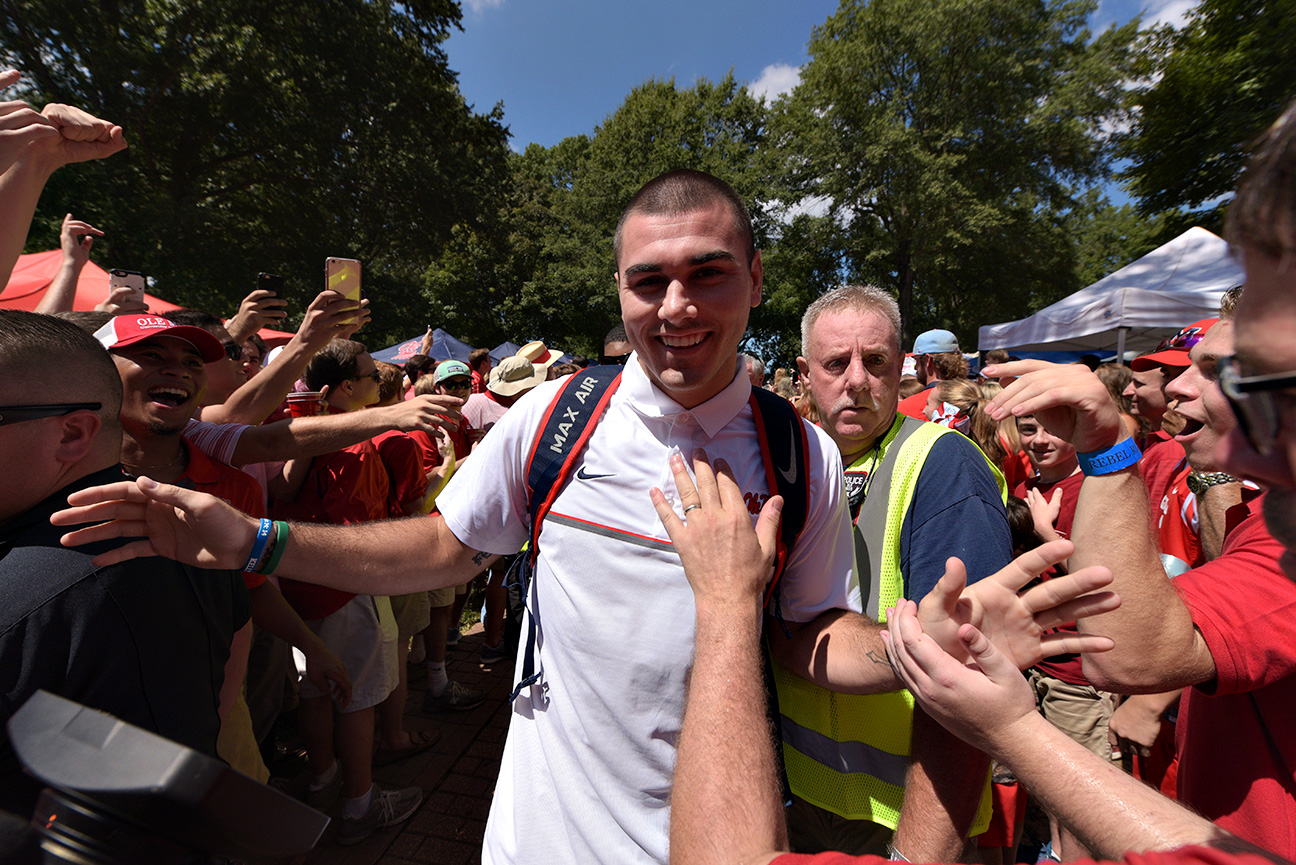 Chad Kelly greets the fans as he and his Ole Miss teammates walk through the Grove to the stadium as part of the "Walk of Champions," a game-day tradition for the Rebels. 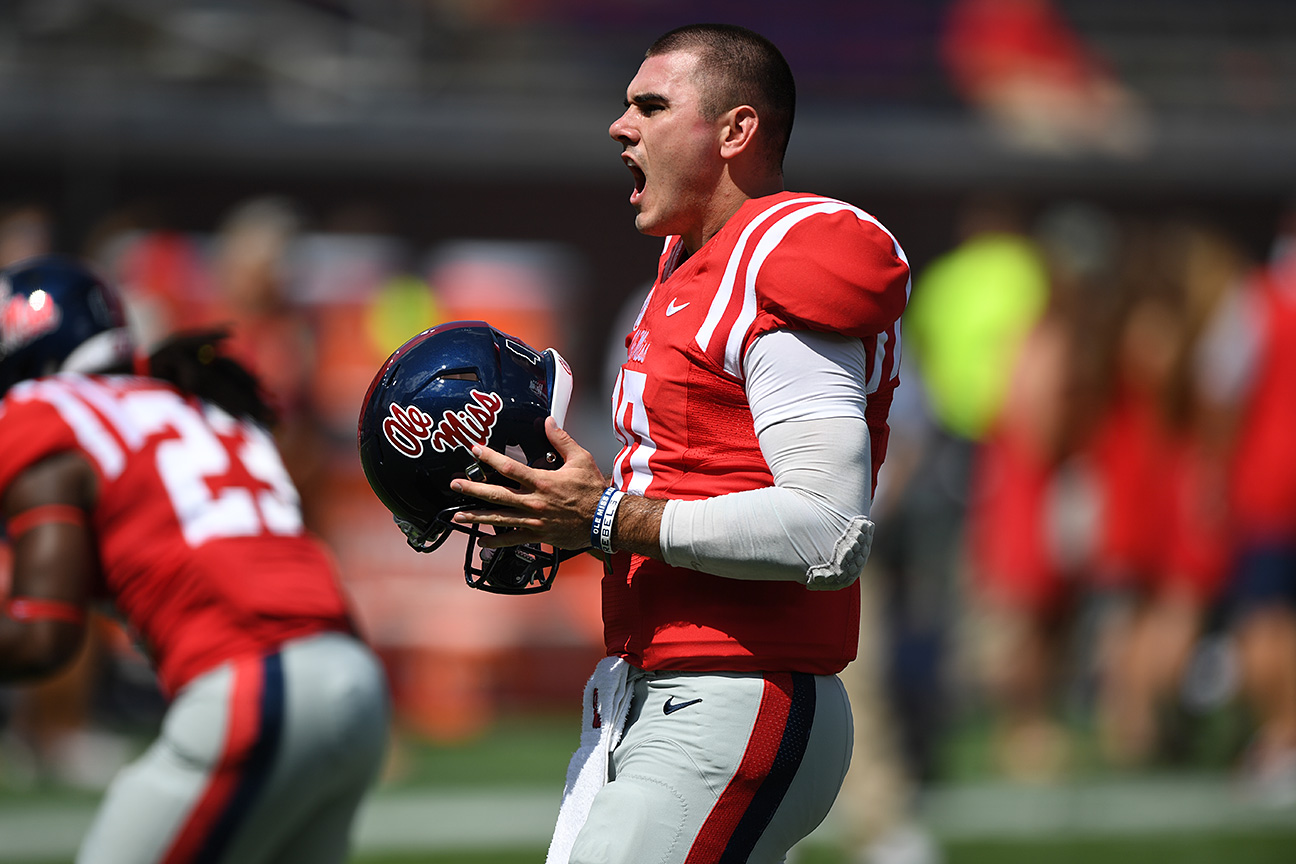 As one of the team leaders, Chad Kelly has never been afraid to be vocal around his teammates. 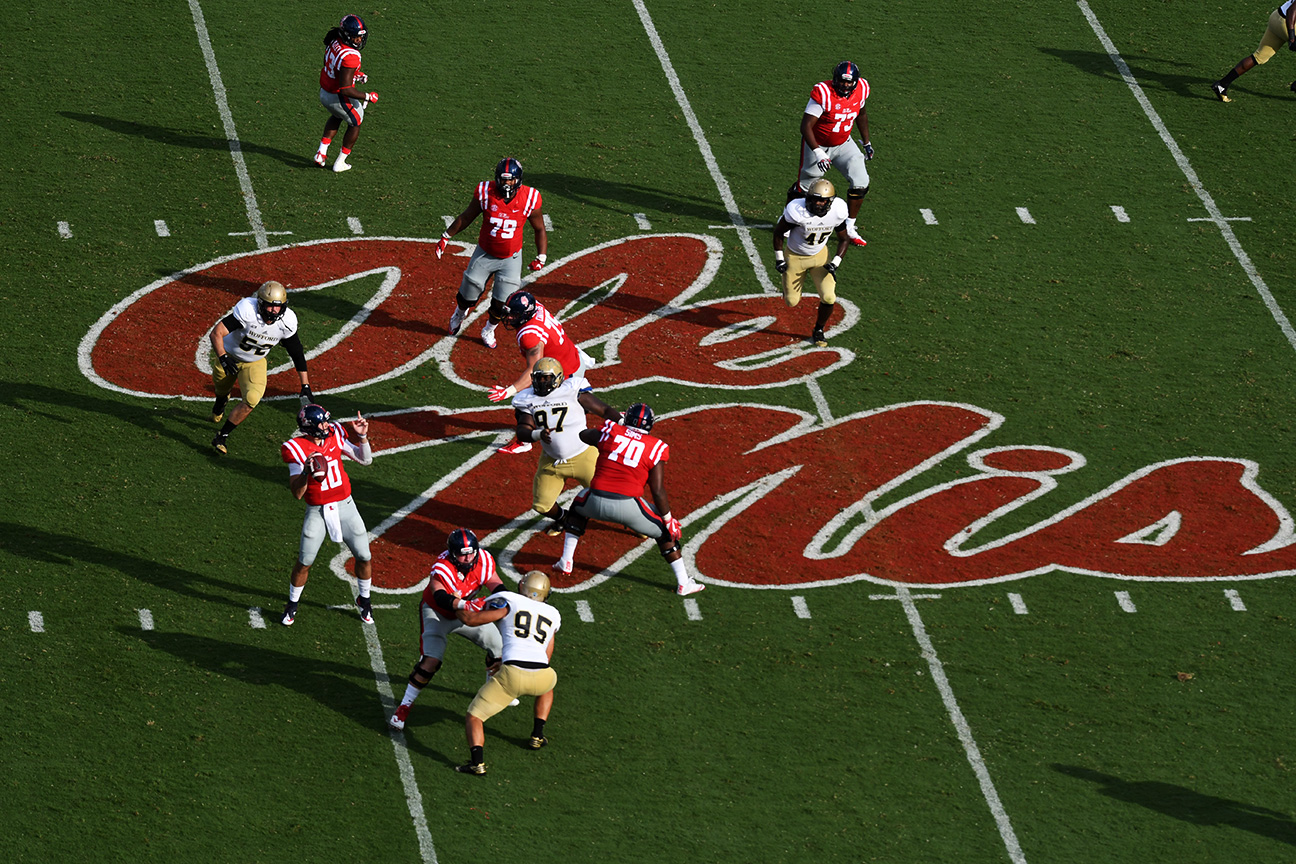 Chad Kelly surveys the field during Saturday's 38-13 win over Wofford. 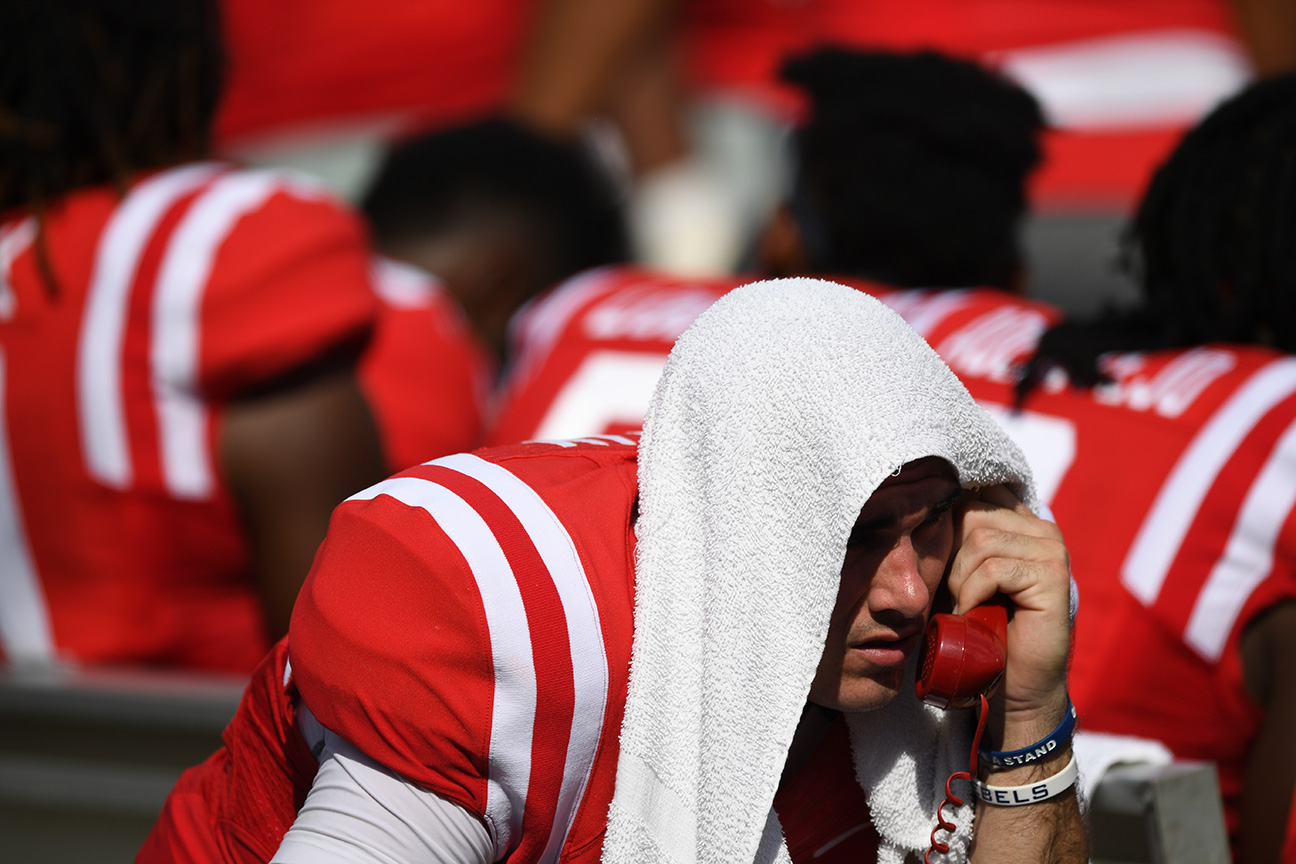 Between drives, Chad Kelly makes a call to the coaches' booth upstairs. 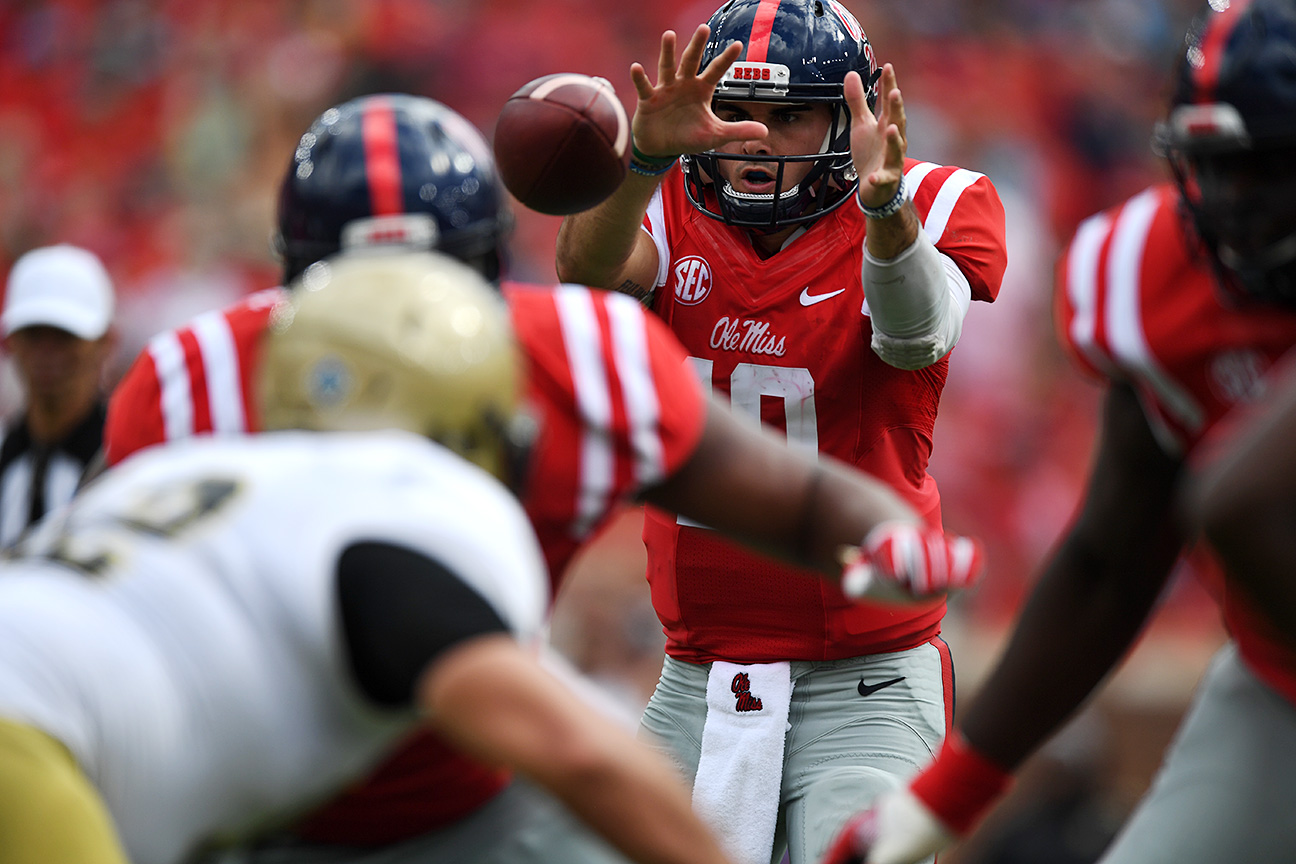 Keep your eyes on the ball: Chad Kelly takes the snap during Saturday's 38-13 win over Wofford. 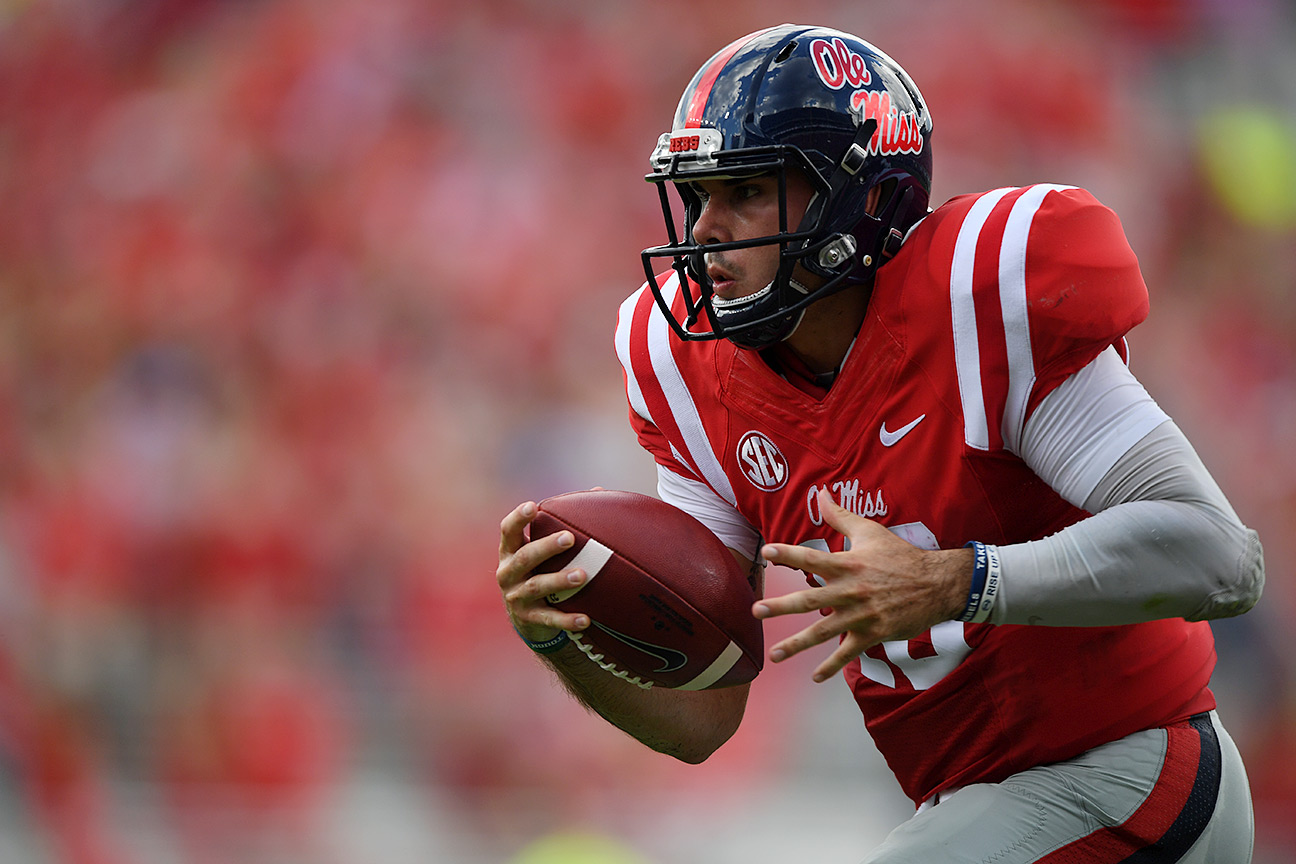 A versatile quarterback, instead of launching the ball downfield Kelly runs for yardage on a play. 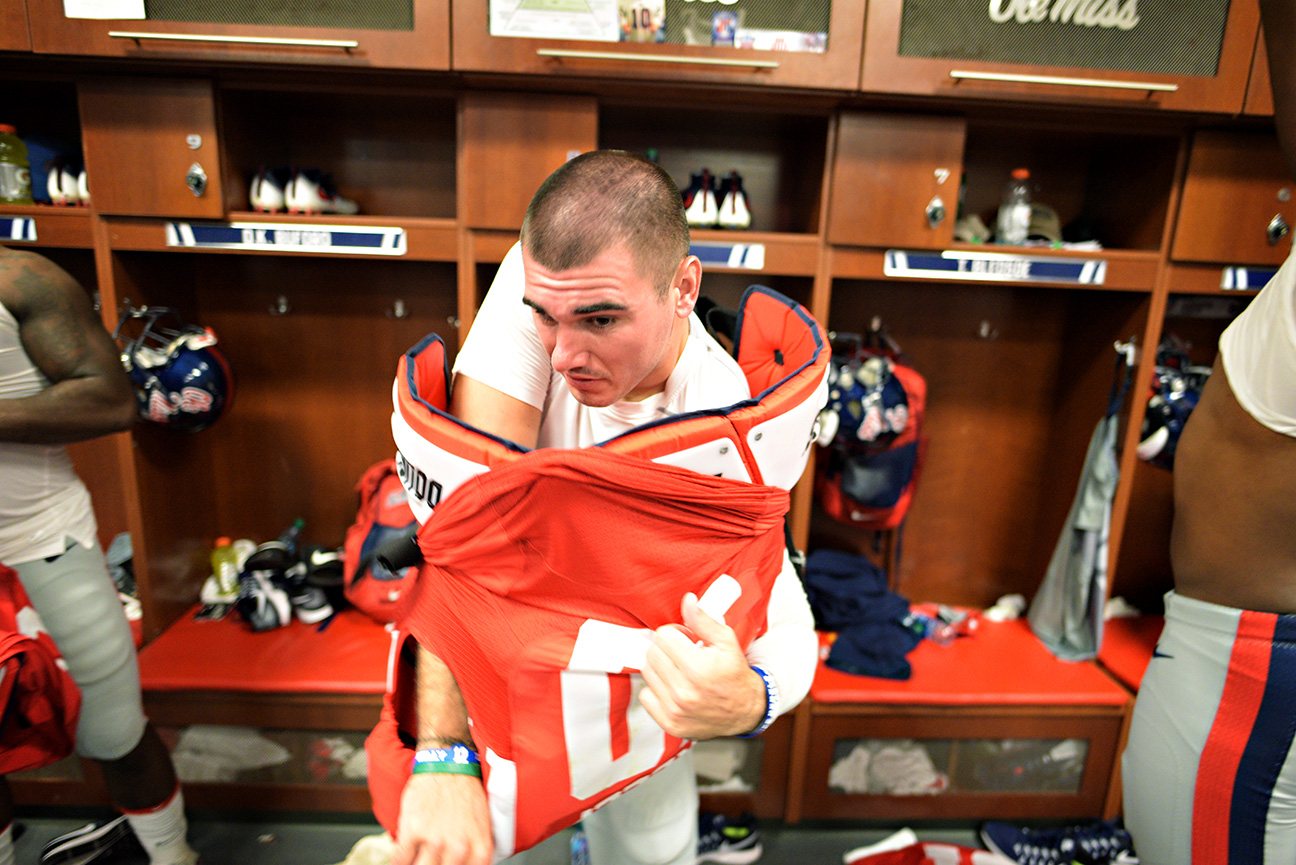 Back in the locker room after the Ole Miss victory, Chad Kelly pulls off his uniform and pads.