DURING THE FINAL weekend homestand at PNC Park in Pittsburgh, the pressing question for fans seated in Sections 26 and 27 seems to have little to do with which players the Pirates will field next year. Instead, these season-ticket holders are wondering whether Phil Coyne will be on the PNC Park roster in 2017.

The usher's answer? If his legs hold out and his mind is clear, Coyne says he'll be back.

Topping the seniority roster for stadium ushers, Coyne, 98, has escorted fans to their seats since 1936 -- missing time only while serving in World War II -- becoming a Pittsburgh sports legend in the process. Beginning at Forbes Field, then Three Rivers Stadium and now both PNC Park and Heinz Field, Coyne has cleaned countless stadium seats with the dampened rag he carries to the stadium in a blue grocery bag.

Coyne, a retired machinist who never married, grew up a stone's throw from Forbes Field, where the Pirates played their games in the Oakland section of town from 1909 to 1970.

"Everyone in Oakland, at that time and well after it, you automatically became an usher," Coyne says. "So, when I was 18 and out of high school, I got on as an usher and then every year you just went."

When will it be time to stop going? "As long as your mind is straight, you're all right, and that can go at any time. I could have a fall tomorrow and get a good bump and that would be it. So you never know. You just have to wait until next April to see if your legs are all right and your mind is all right, and you sign up," he says.

"They're hoping to see me back. That goes on every year," says Coyne, who likes to say he has two Oreos and a glass of milk before bed each night. "And I surprise them every year, too. I surprise them coming back. I tell people as long as I don't go to Heinz Field for a game that's being played at PNC Park, I'll be back." 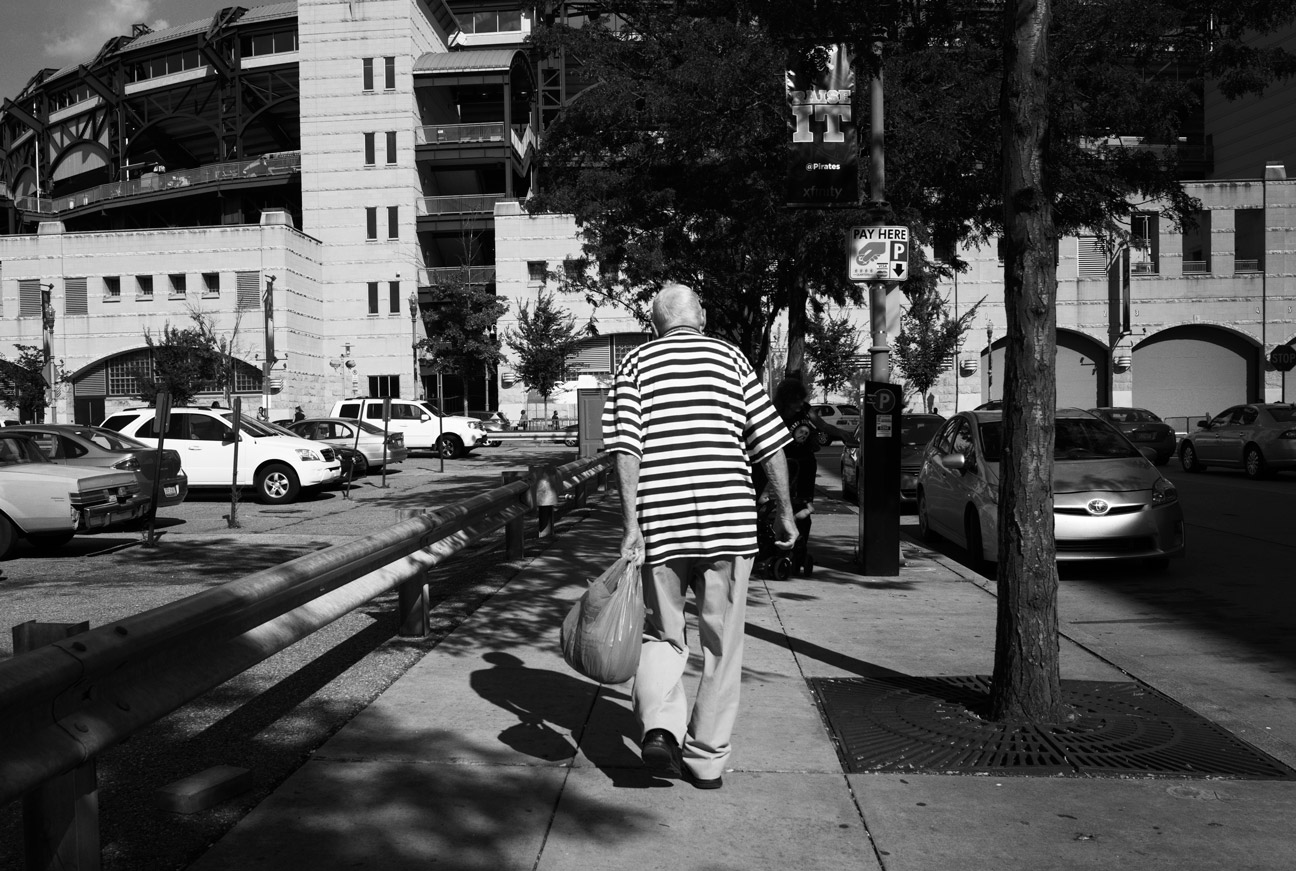 Usher Phil Coyne, 98, exits the subway on Pittsburgh's North Side and walks to PNC Park three hours before game time. Coyne said it's about an hour ride from his home to the stadium by public transportation.

“I was born and raised in Oakland [Pennsylvania]. When I was 18 and out of high school, you know, I got on as an usher.” 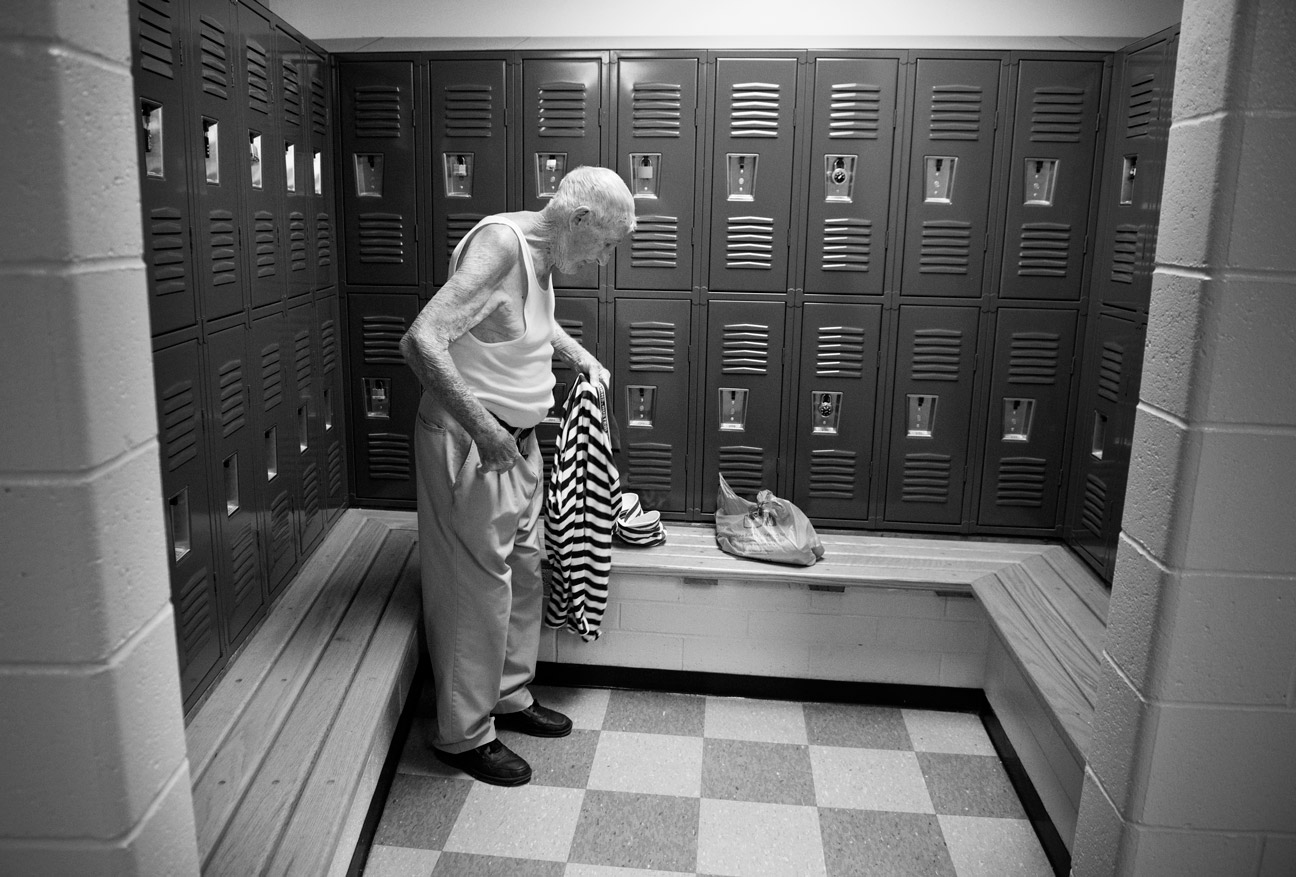 Another day at the ballpark: Coyne, who has been a Pirates usher since 1936, gets dressed in the men's locker room. 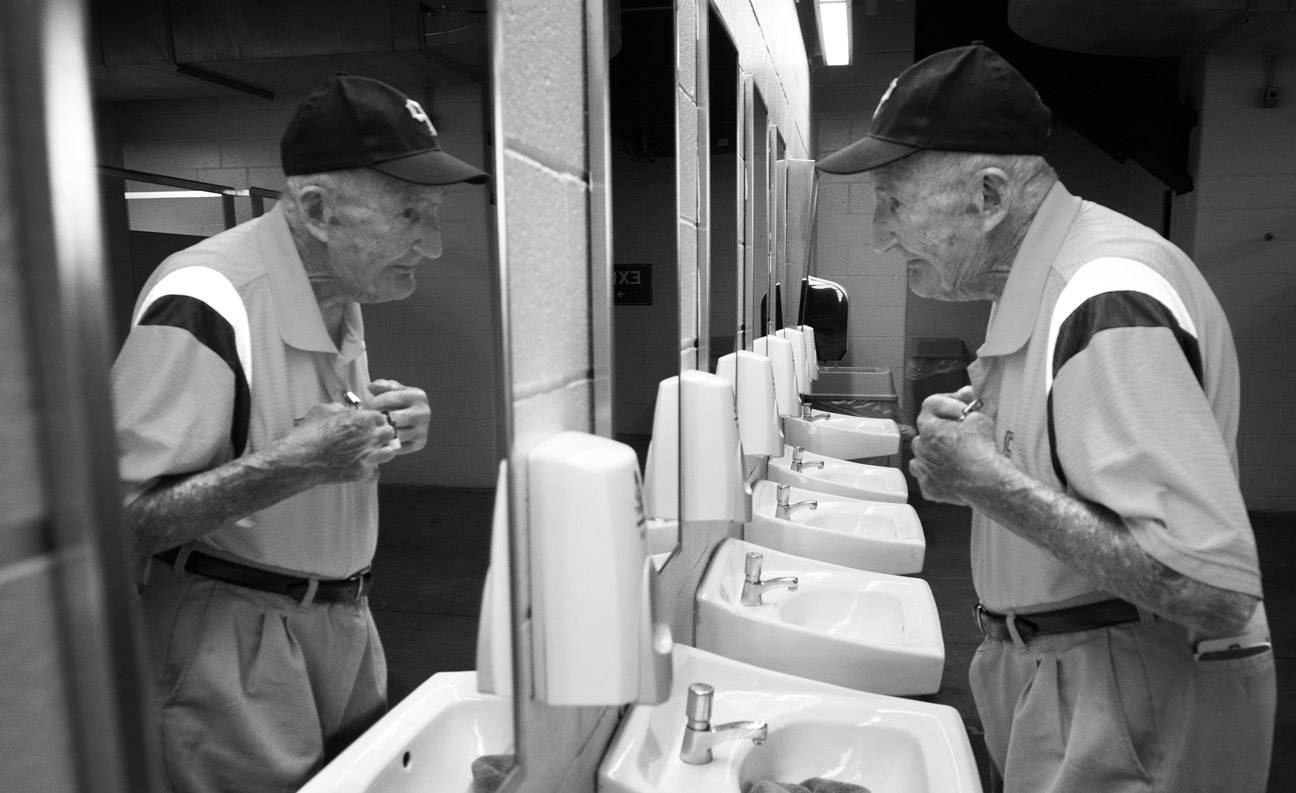 Coyne, a retired machinist, attributes his longevity to luck -- and a late-night snack.

“Two Oreos and a glass of milk going to bed. That's what I always tell them, but it's luck.” 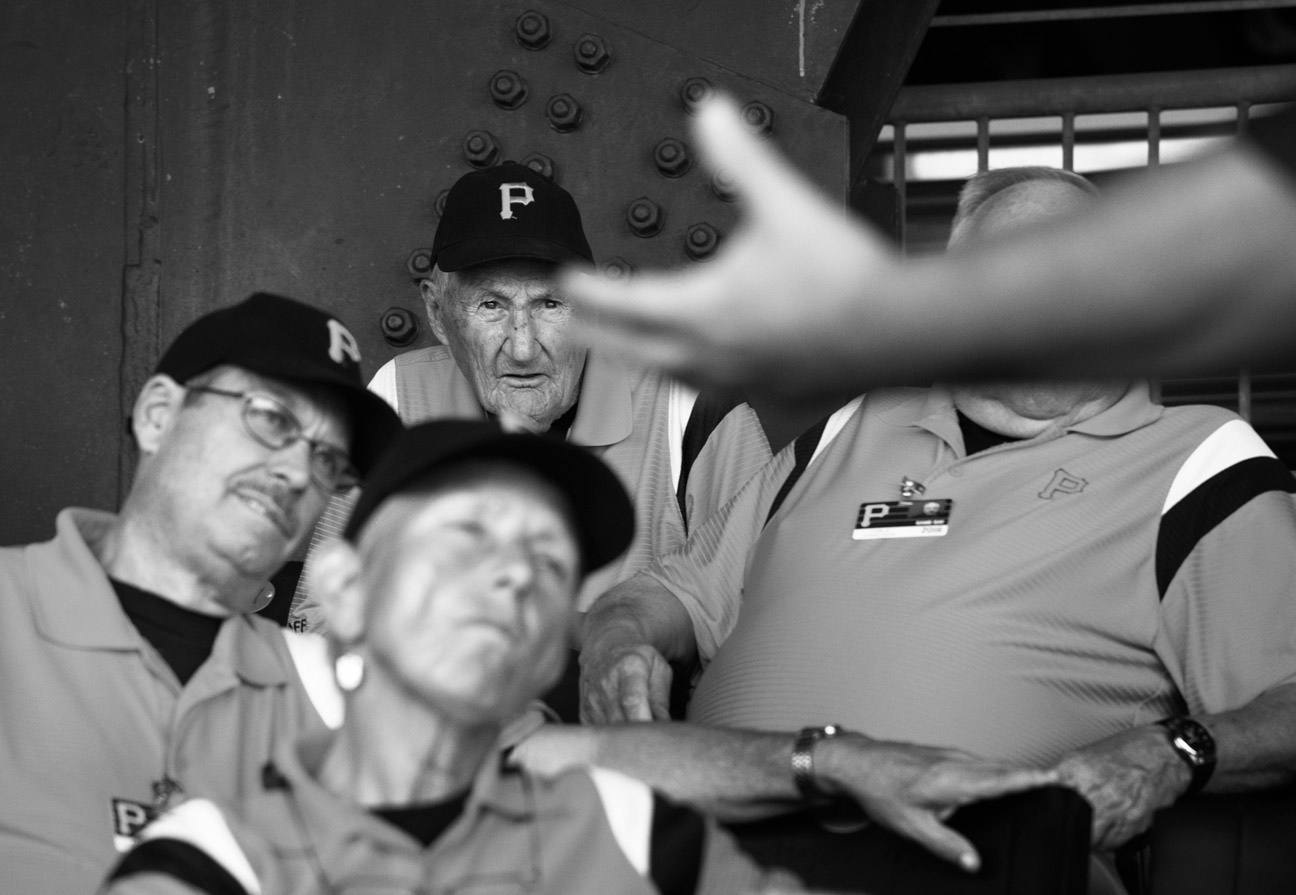 It's no surprise to learn that Coyne's colleagues are all much younger than him -- but there are some who worked with him as far back as the Forbes Field years. 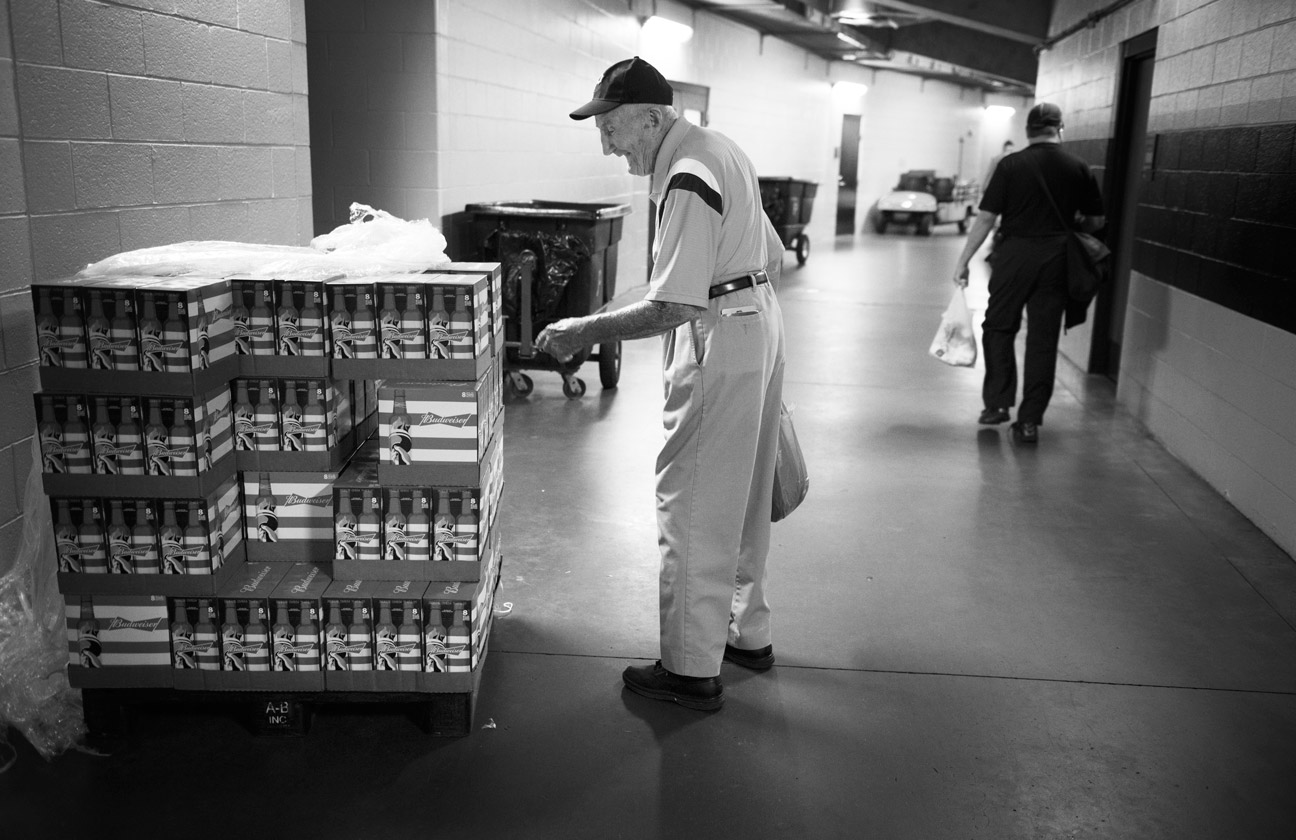 Coyne, making sure the suds are ready for the day's game, says he used to talk shop (in a sandwich shop) with longtime Pirates player and manager Danny Murtaugh, who died in 1976. 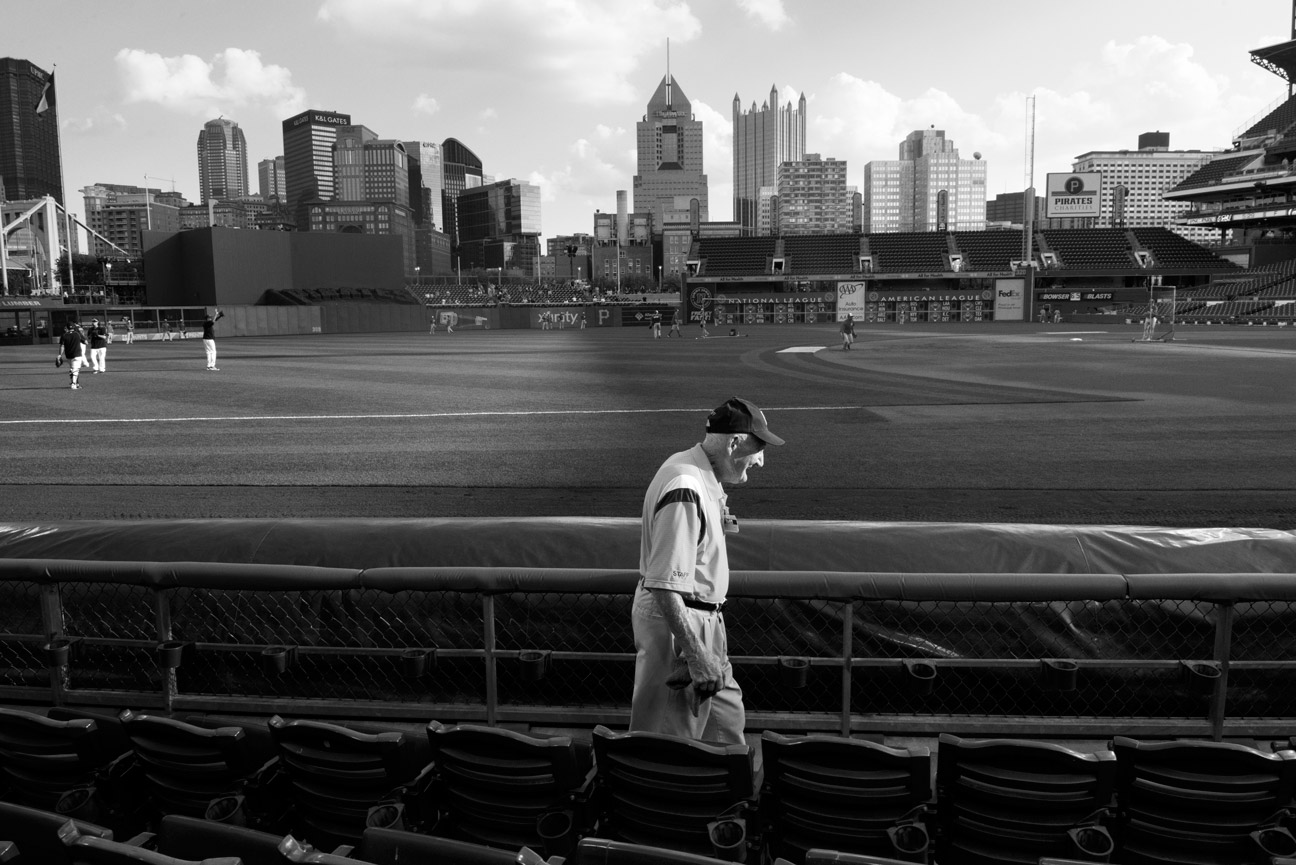 Coyne does a walk-through of his sections before games, making sure everything is top-notch before the gates open and fans arrive. Perhaps his favorite fan of all time? His mother, whom he brought to a World Series game in 1960 -- though she didn't exactly enjoy it. 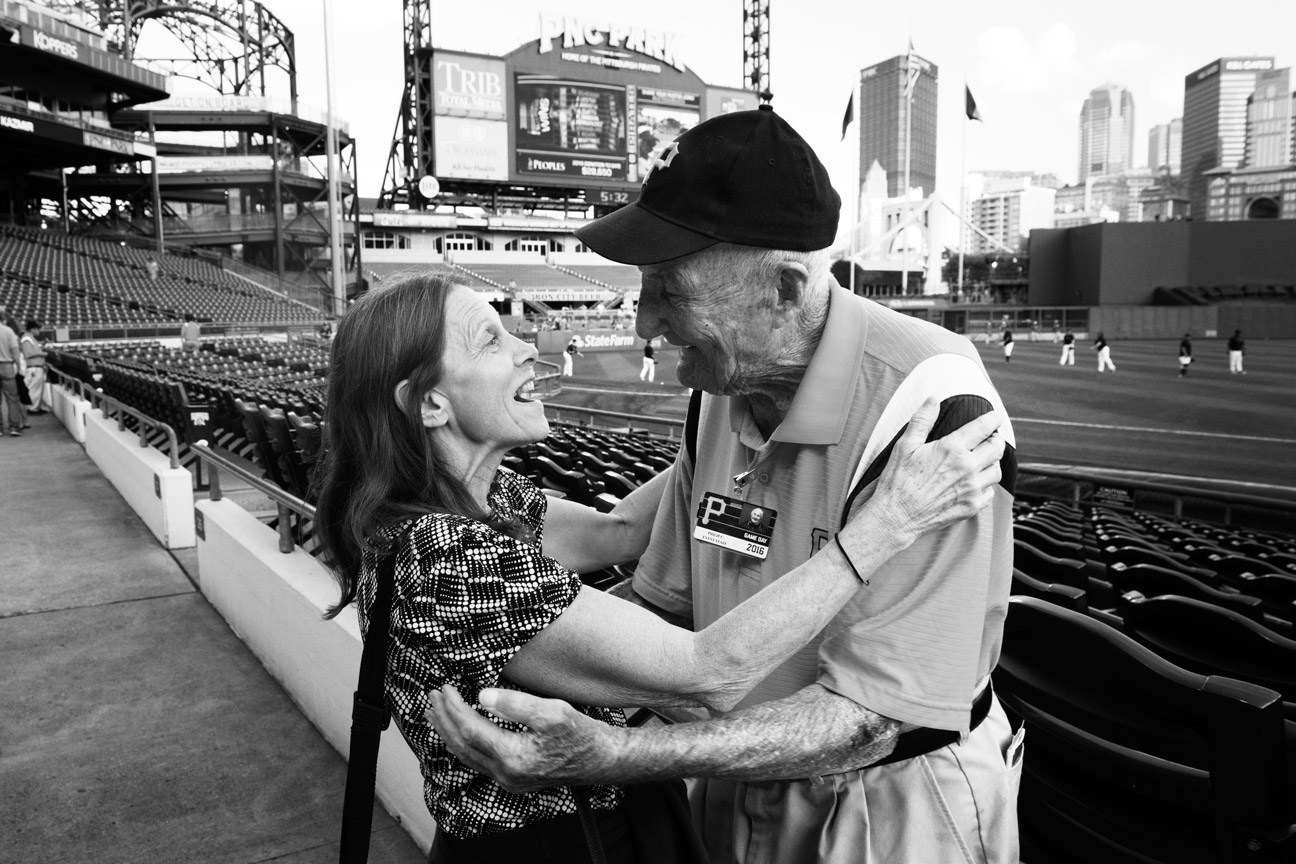 Pirates fan Sharon McCullough of Elwood City, Pennsylvania, greets Coyne at the ballpark. Being a Bucs fan in Coyne's neighborhood was mandatory -- and if you weren't, well, the punishment was severe. 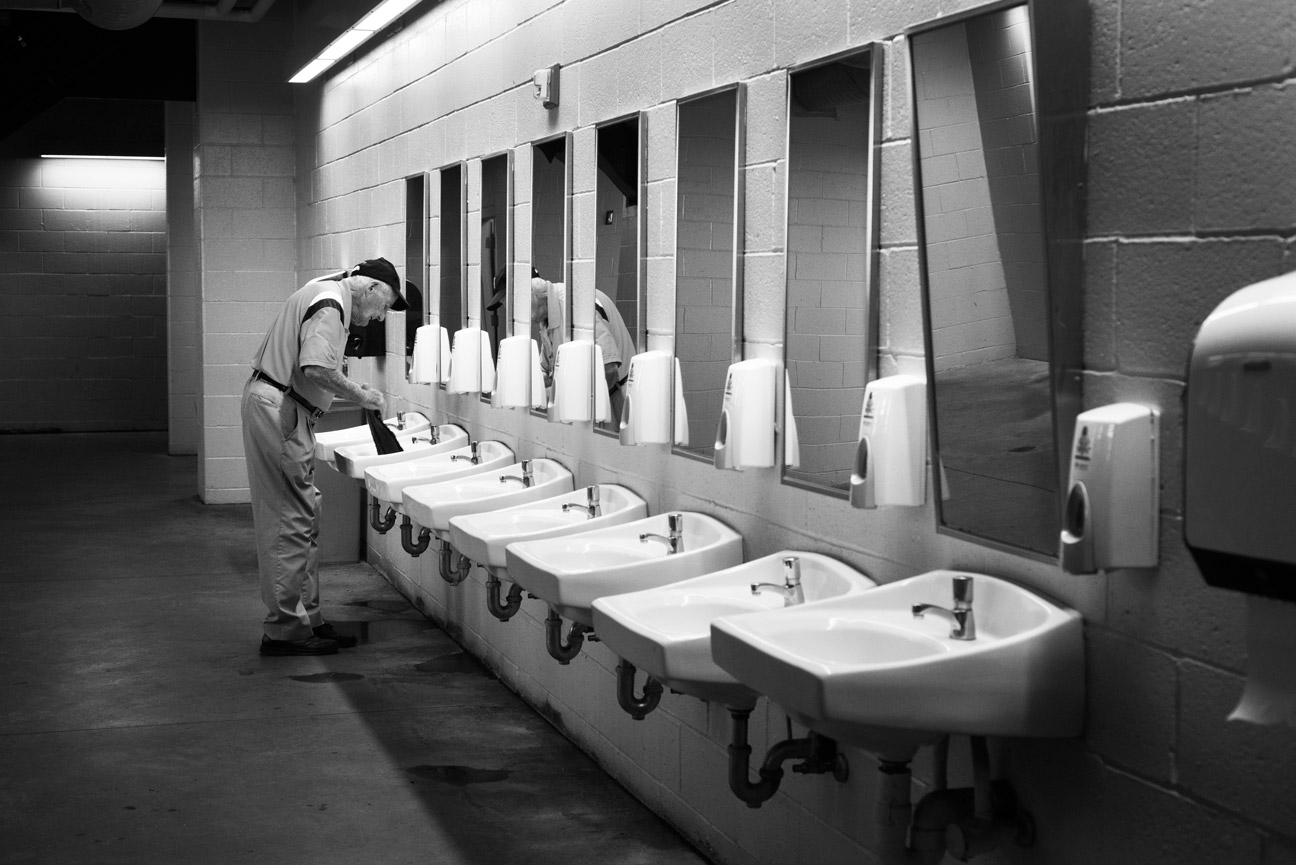 Two hours before the game, Coyne, shown rinsing the rag he uses to wipe down seats, would get to play softball at Forbes Field during the employees' annual end-of-season picnic.

At PNC Park, Coyne keeps all the seats clean and dry and calls the fans well-behaved. It wasn't always that way at Forbes Field.

“There's no way you can get the people off the field. You know, in them days we'd go down so people wouldn't jump over the rail.” 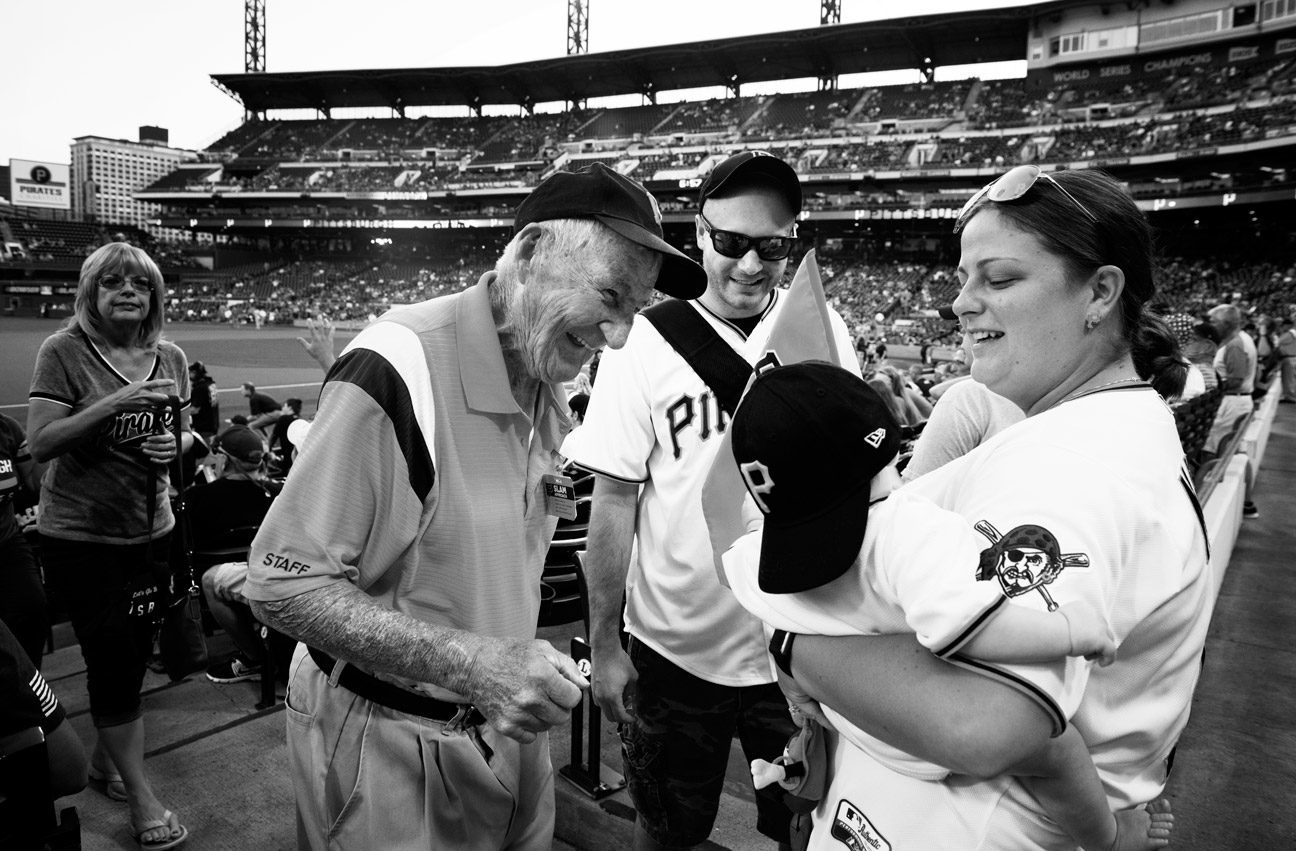 Coyne visits with Pirates fans Brad and Jamie Bonaroti, who brought their 14-month-old daughter, Kenzie, to the game. Coyne says his interactions with fans are what keep him coming back to the ballpark, year after year.

“Sure enough a guy comes ... and he says, 'Here's your put-me-to-bed, tonight' and he gives me a little package of Oreos.” 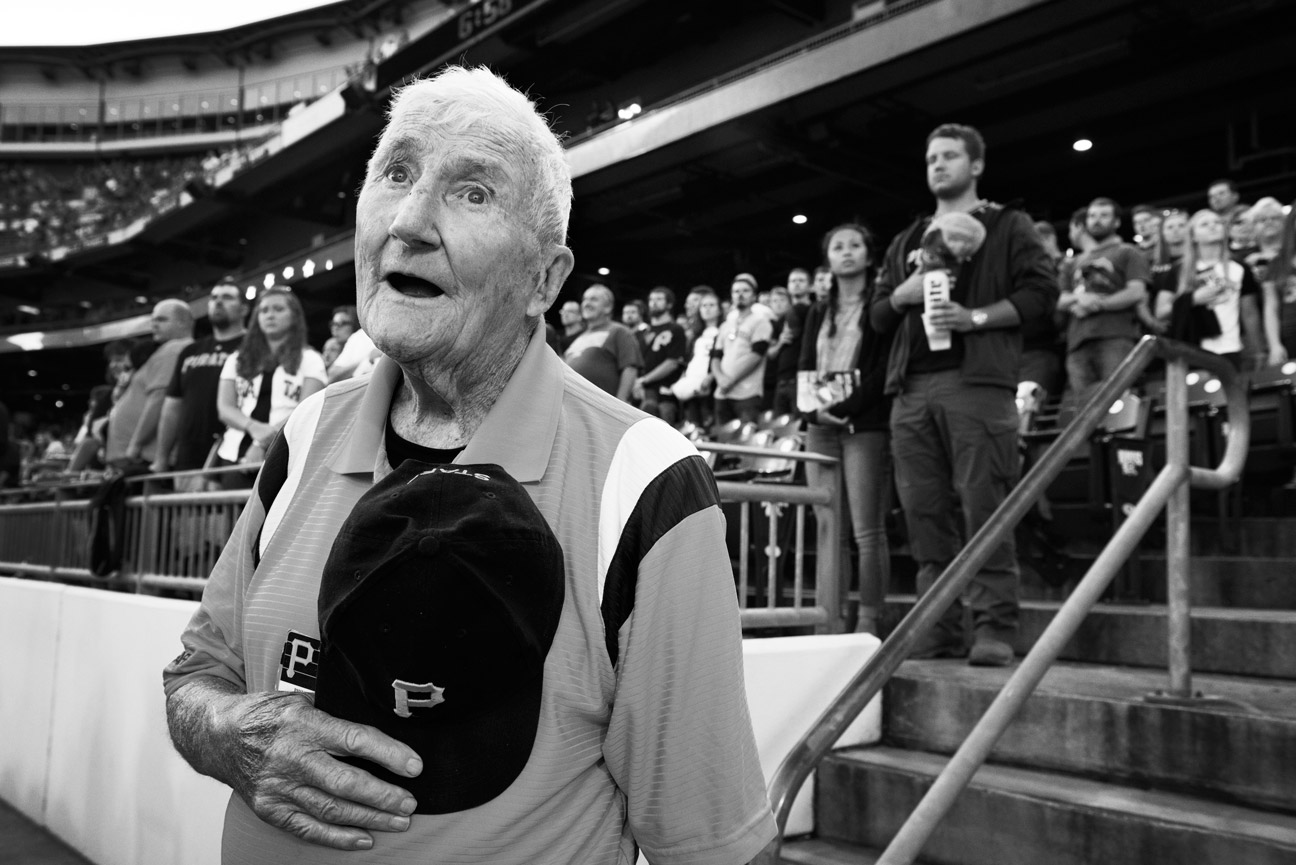 A World War II veteran, Coyne sings along with the national anthem before a game. Hard to believe if you're a scholar of baseball history, but when he first started working as an usher, Hall of Fame brothers Lloyd and Paul Waner were still roaming the outfield. 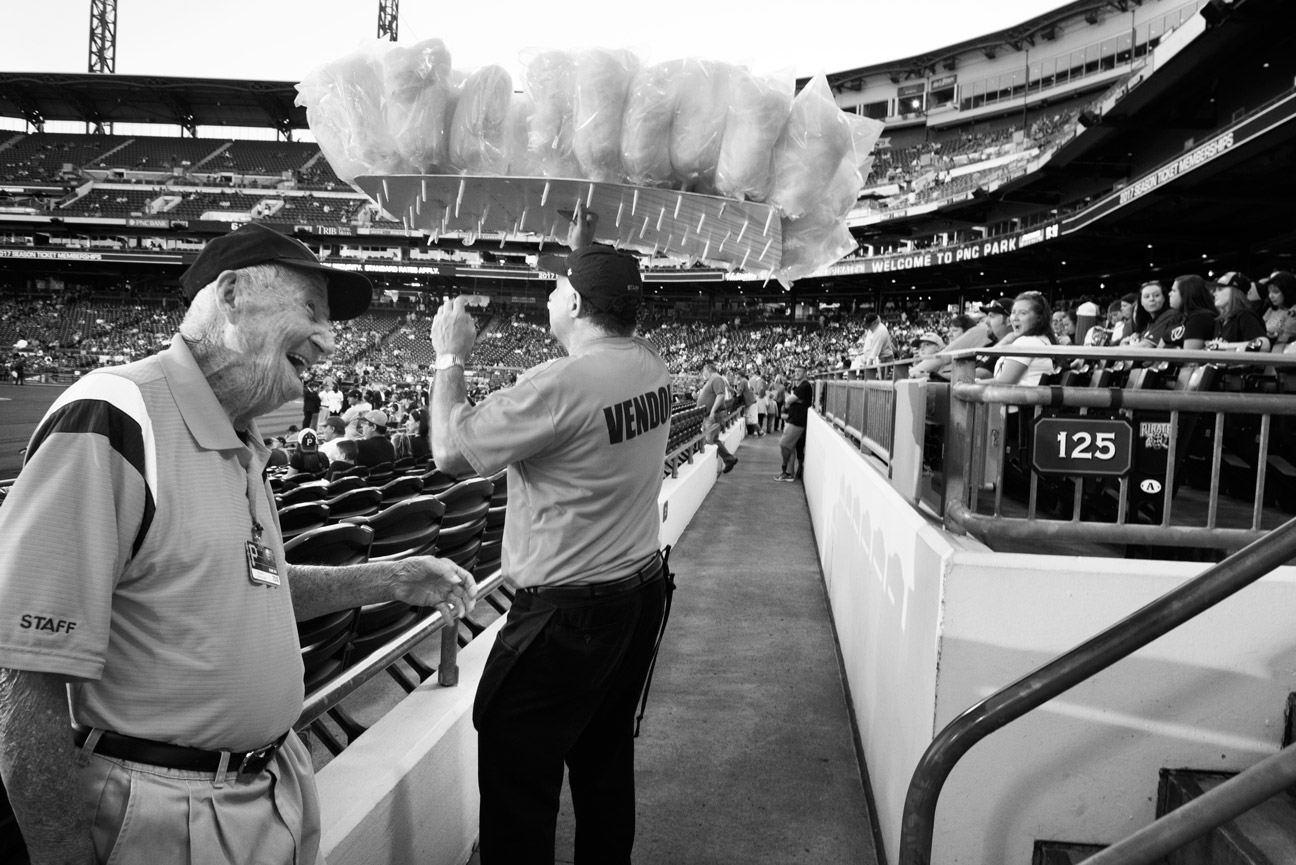 Coyne, of course, was at the ballpark for Bill Mazeroski's legendary walk-off home run against the Yankees in Game 7 of the 1960 Fall Classic.

“The place went wild! I just walked away from it. I mean, there was nothing we could do.” 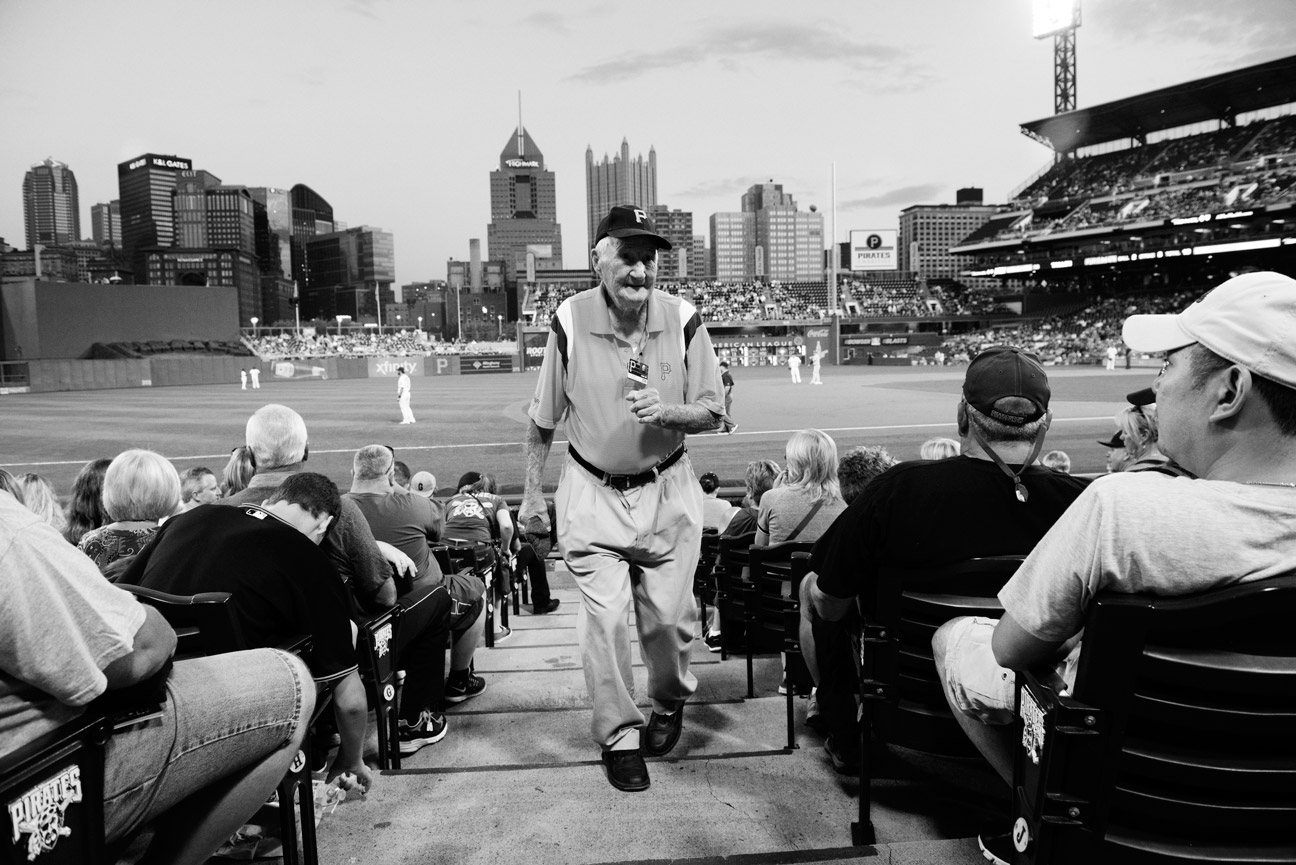 Coyne keeps a smile on his face -- you never know when he might end up on television (or in an ESPN.com photo, for that matter), which he often does. 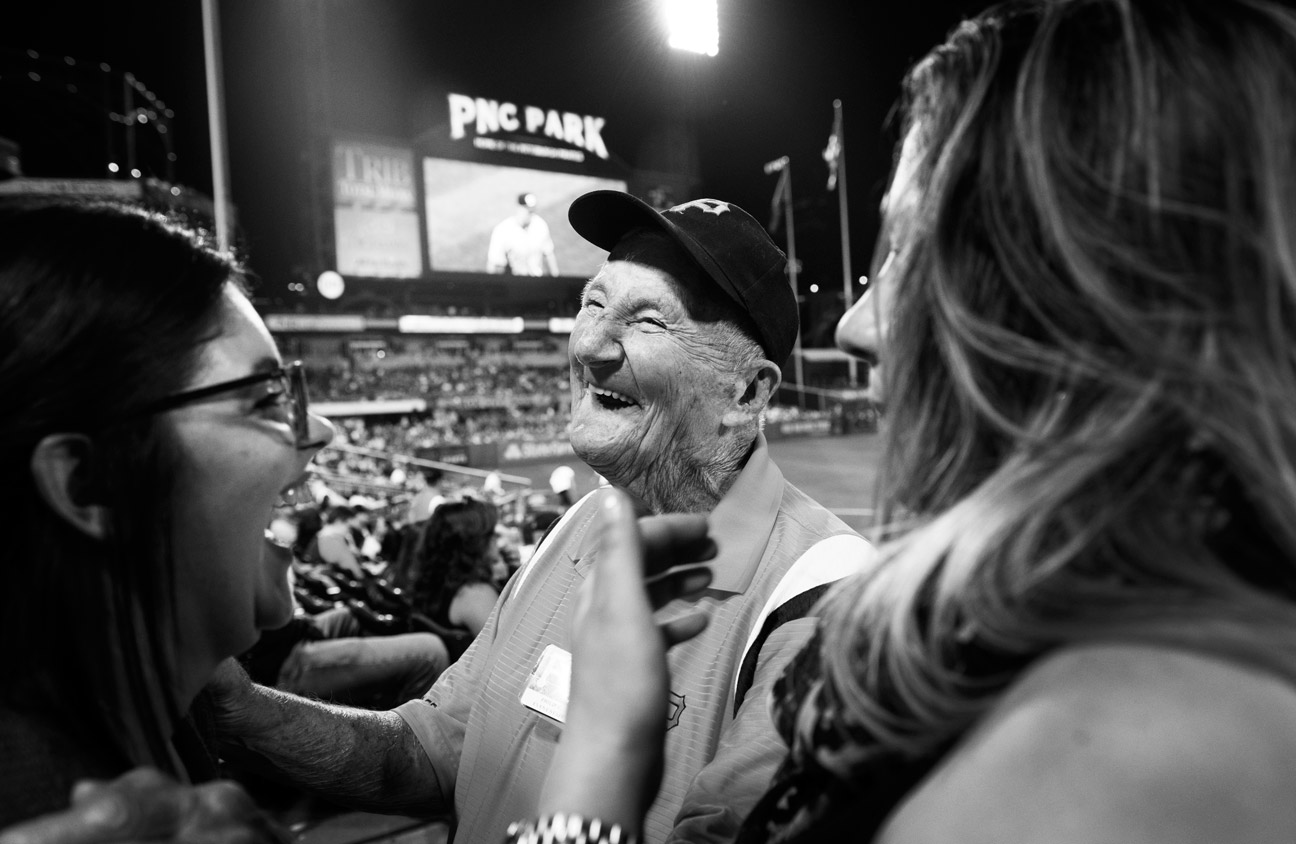 Coyne, laughing with fans Gabby DePasquale, left, and Erin Verni, considers many of the longtime Pirates punters in his section part of his family. Some even followed him from Forbes Field to PNC Park.

“We were over at Three Rivers and the section I had, I had them for a long, long time. You know, we were all family.”Phil Coyne 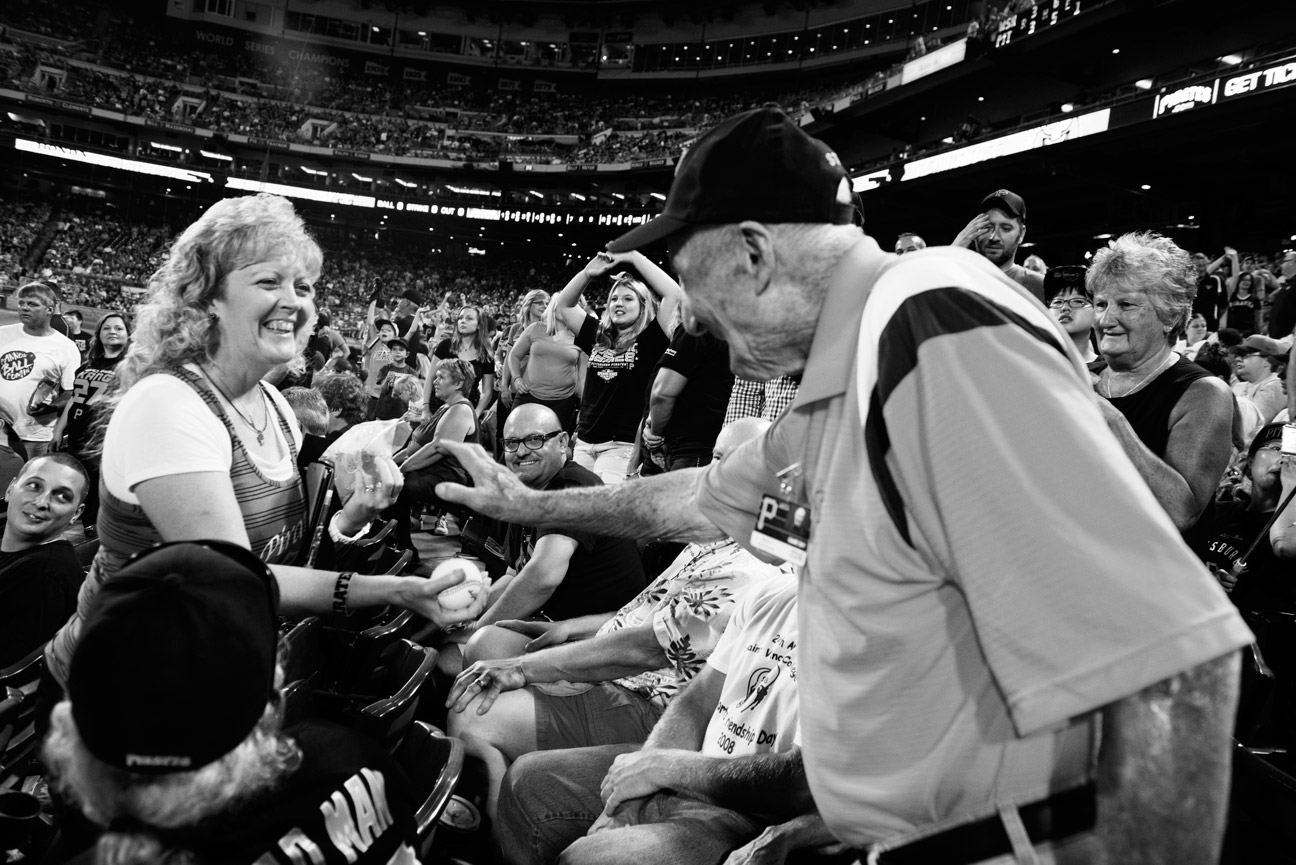 After being hit by a foul ball, Tammy Shook of Cumberland, Maryland, is handed the ball by Coyne. Coyne has been at the ballpark a lot more since he retired; back when he worked in a machine shop, it was more of a weekend gig. 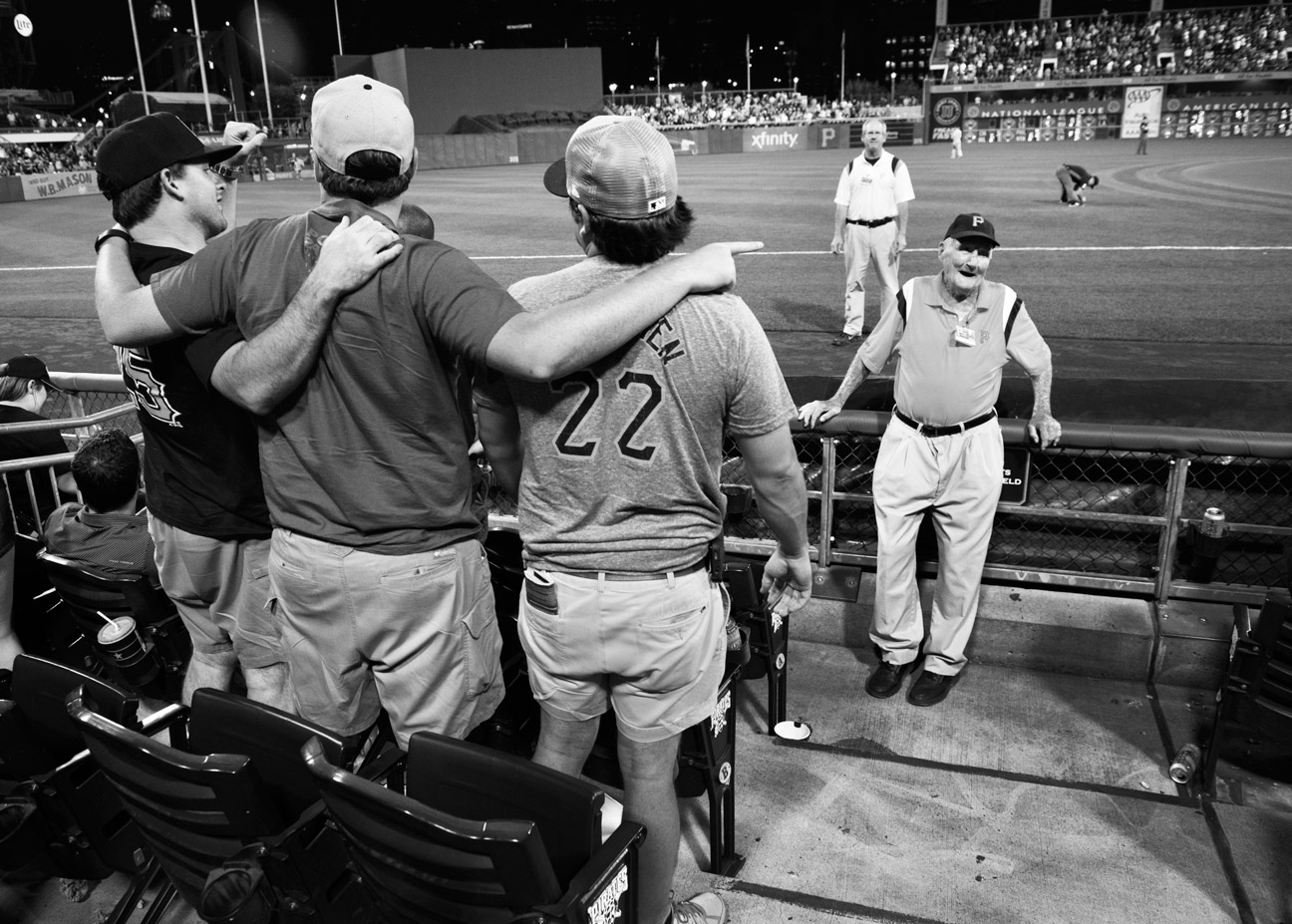 Coyne watches Pirates fans sing "Take Me Out To The Ballgame" during the seventh-inning stretch. You can be sure they're sitting (or standing) in the right spot; the experienced usher knows how to deal with fans who've gotten, um, lost.

“I don't know why you're sitting down here. In this section here, they give free beer all night!” 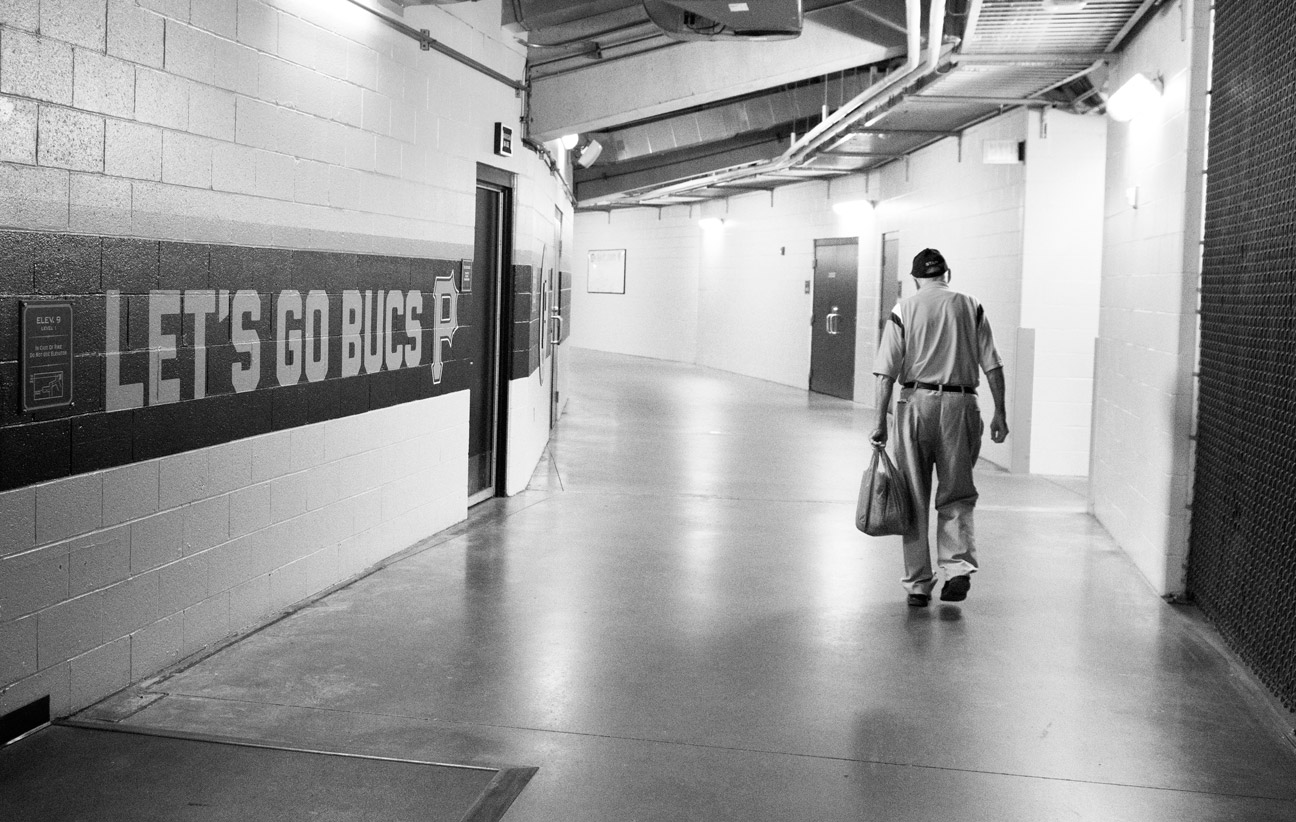 Coyne walks through the corridors at PNC Park. He has seen a few stadiums come and go. These days, he doesn't see as many players off the field as he used to. 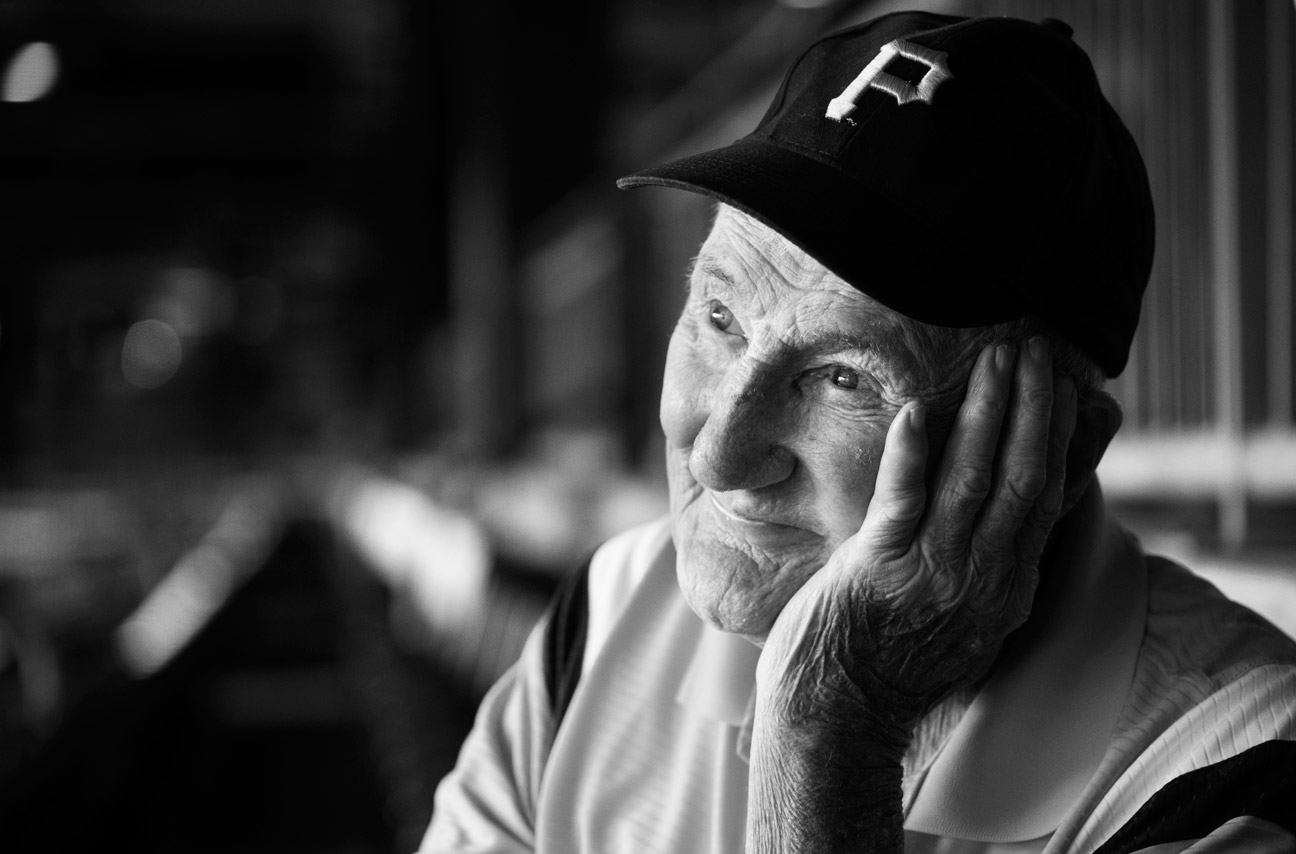 Coyne says "everybody stayed in their seats" when the great Ralph Kiner came to bat -- regardless of the score or the inning. 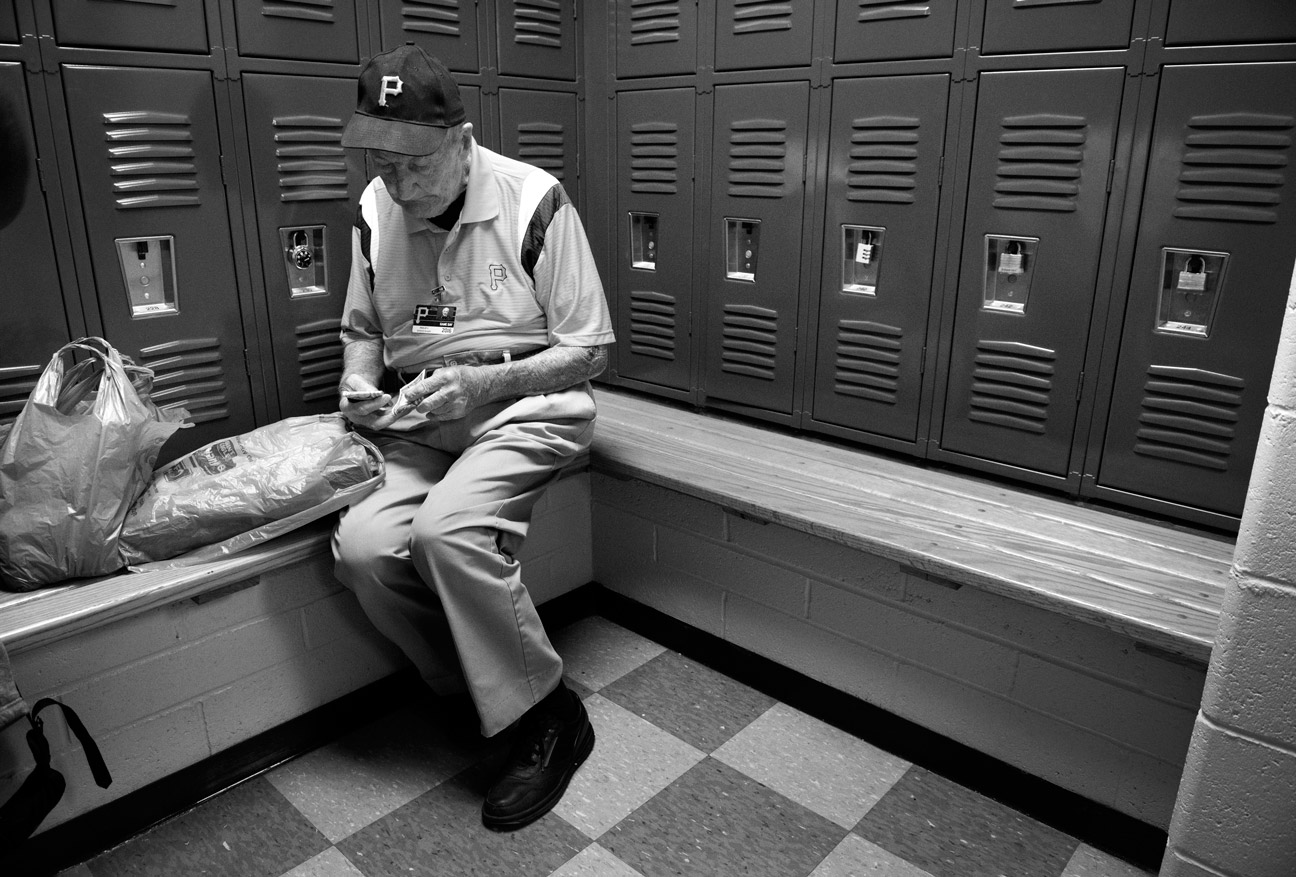 What does Coyne do in the winter? He's got family -- and football -- to help him count down the days until spring. 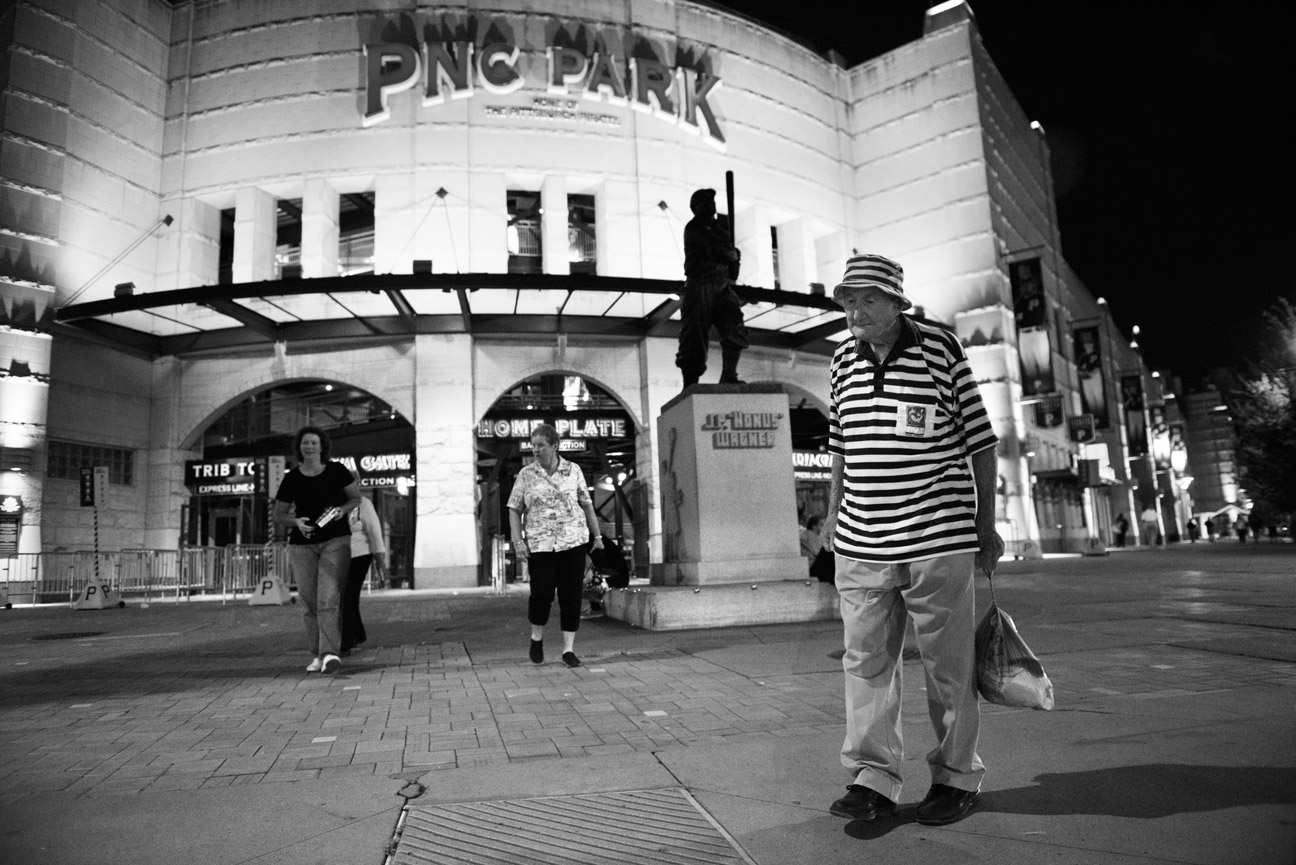 Coyne heads back home after a long night at the game. He'll be back again -- as long as his body (and mind) can still carry him.

“As long as your mind is straight, you're all right. ... I surprise them every year, too.”