our years into the Theo Epstein era, the Cubs find themselves in a place they've never been before -- favorites heading into the playoffs.

In four years, the Cubs have gone from a 101-loss regular season to a 103-win regular season, a drastic change that has kept the center-field scoreboard operators busy raising the W flag after each victory. Wrigley Field has been buzzing inside and out this season as the Cubs have given their faithful plenty to cheer about.

The only thing as plentiful as the runs the Cubs racked up this year were the laughs that could be heard around the cage at batting practice, on the field and in the dugout. This team knows how to win, and it knows how to have fun. 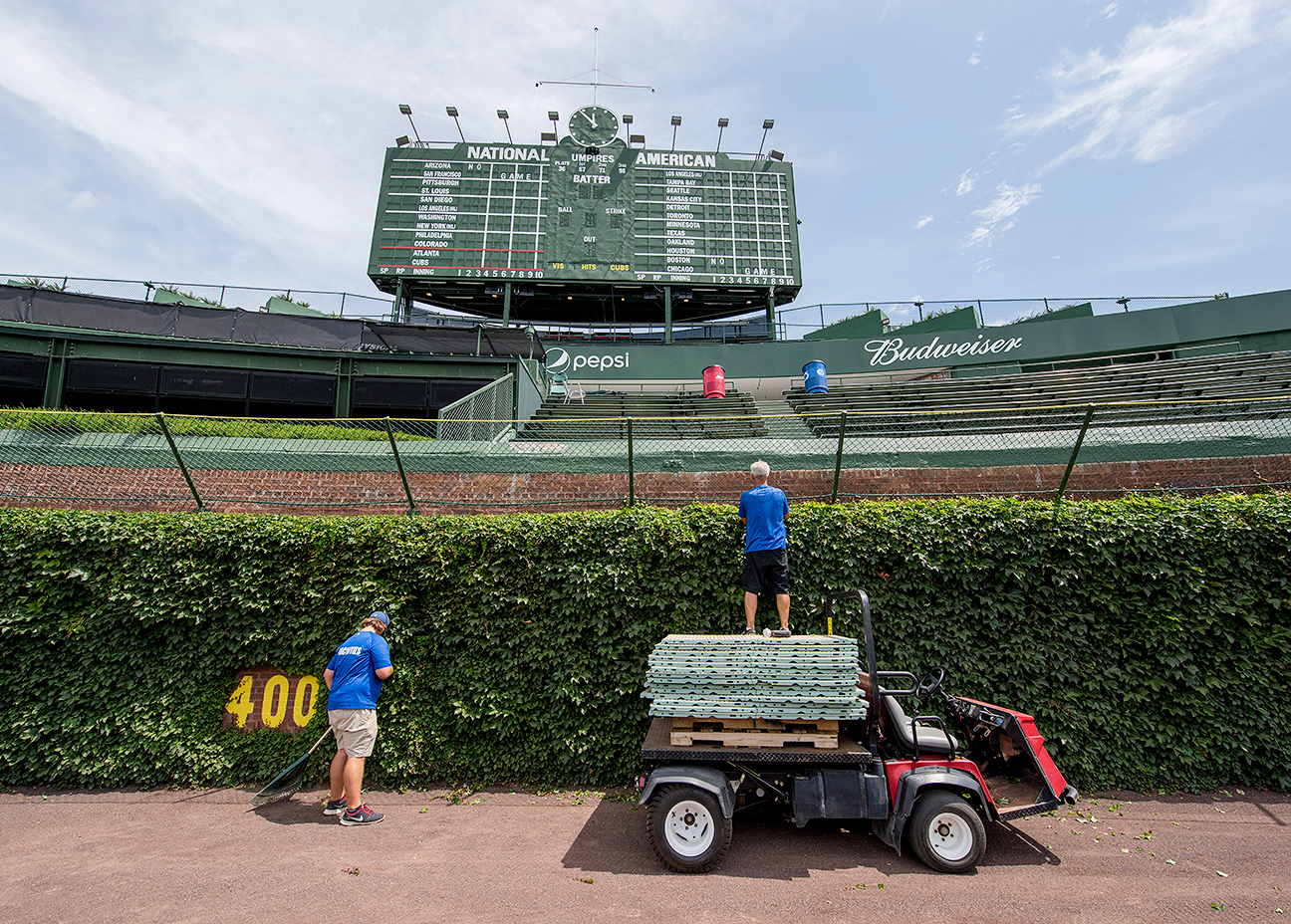 Rick Fuhs, a groundskeeper and scoreboard operator for the Cubs, trims the ivy on the outfield wall. Fuhs has been with the Cubs for 38 years and started as a teenager sweeping the outfield bleachers. Assisting Fuhs is groundskeeper intern Alex Pancek. 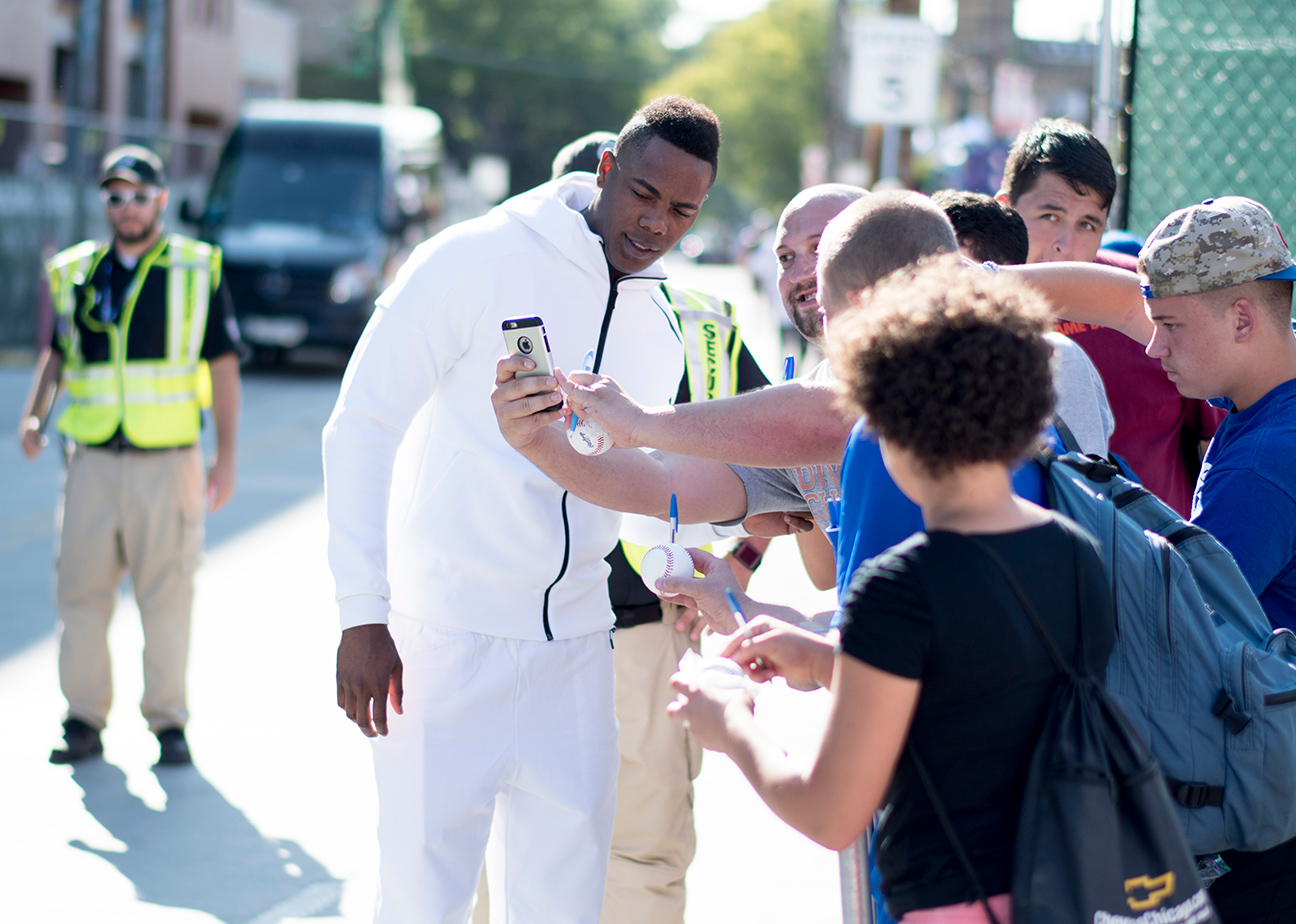 Aroldis Chapman stops to sign autographs and take pictures after arriving at the stadium before the Cubs take on the San Francisco Giants on Aug. 31. 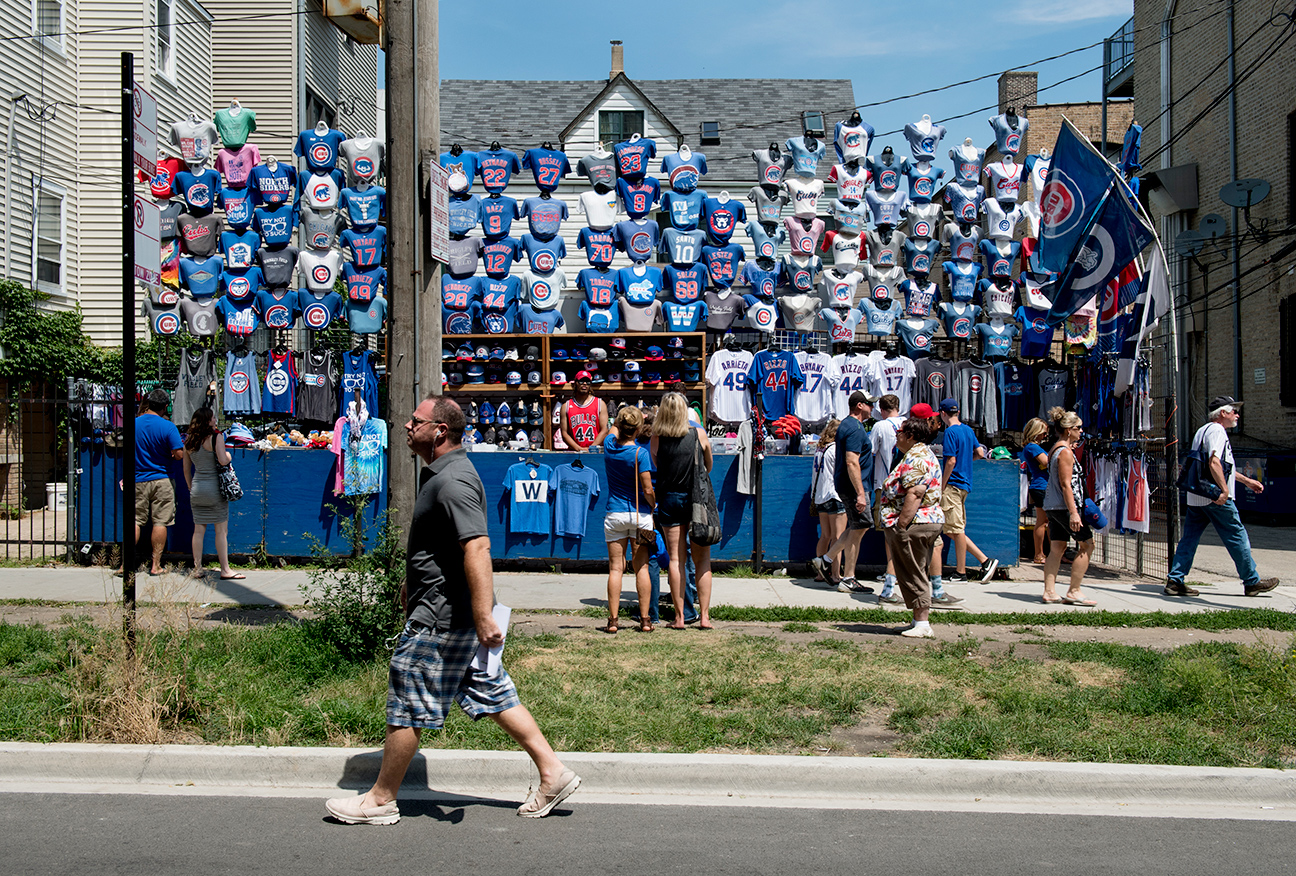 Fans visit a souvenir stand on Waveland Avenue beyond the left-field bleachers. 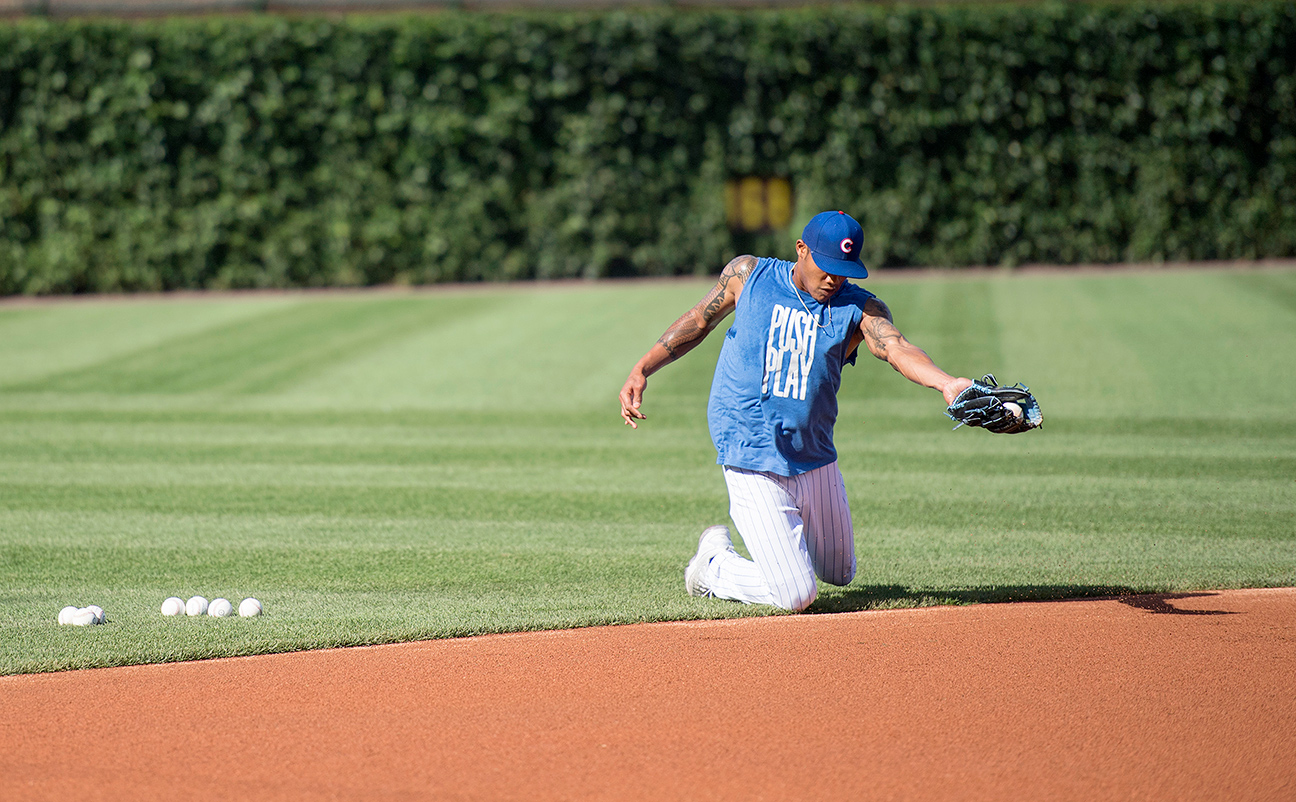 Shortstop Addison Russell gets in some fielding practice before a game against the Miami Marlins on Aug. 1. 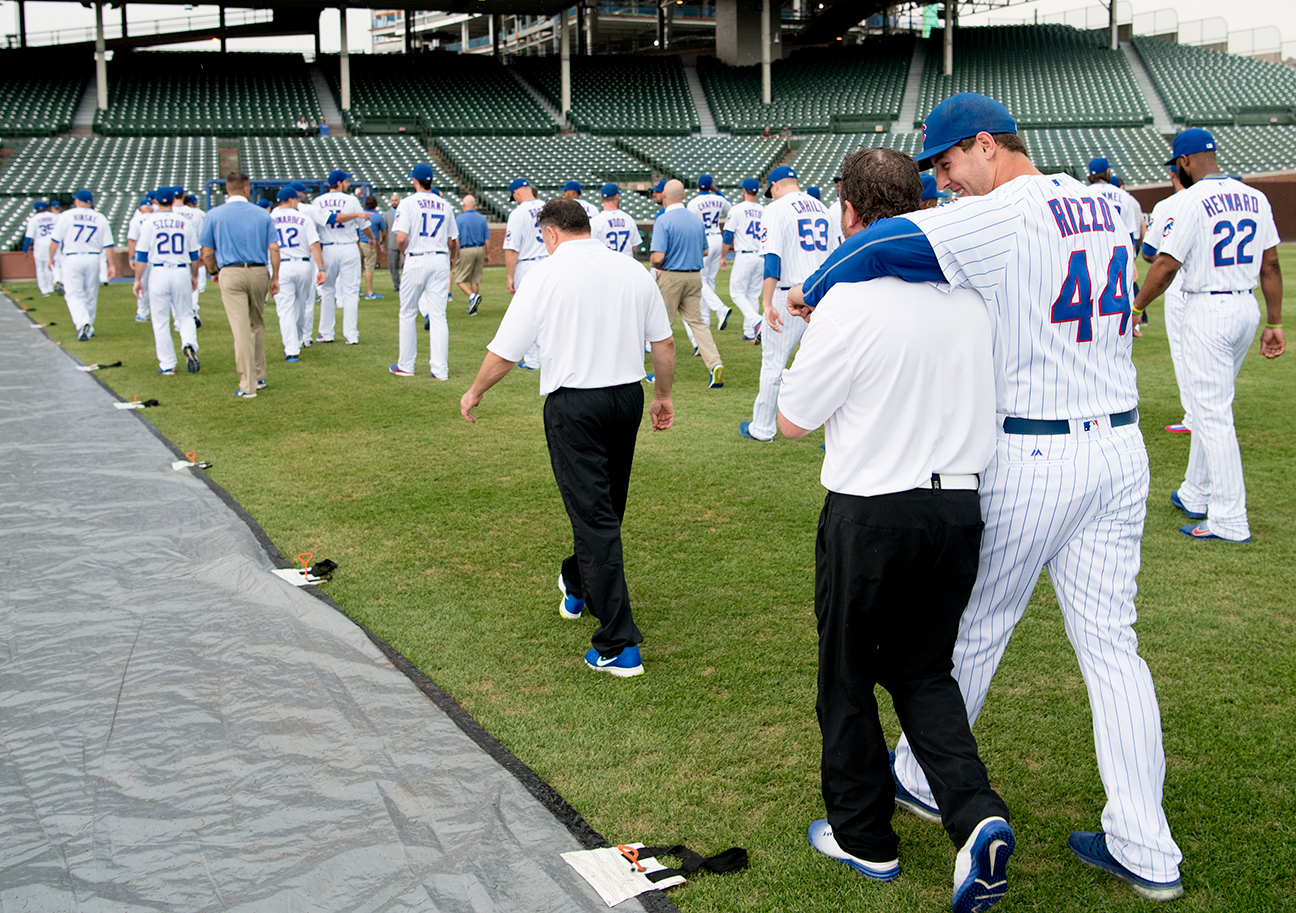 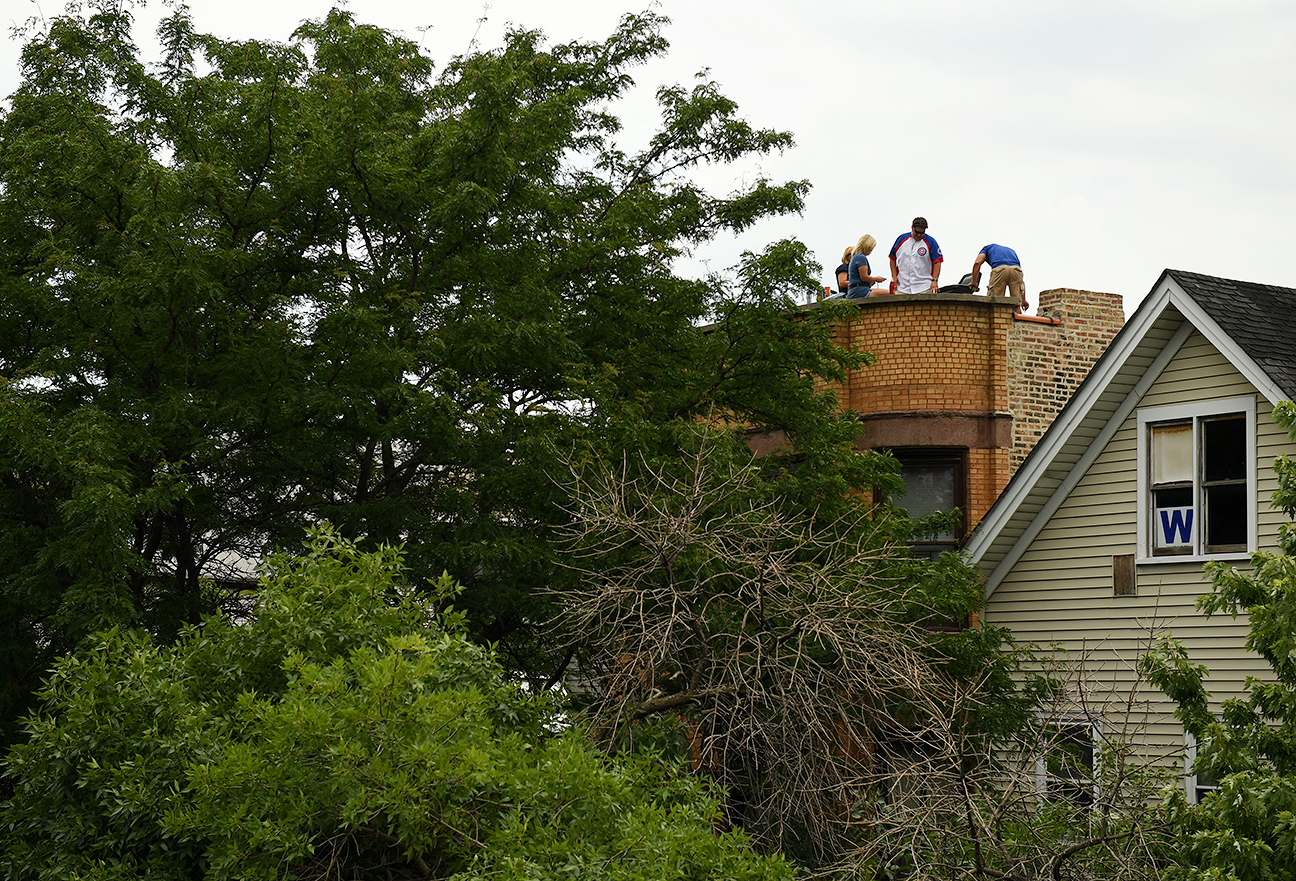 Fans take in a game from their rooftop as the Cubs take on the Mets. 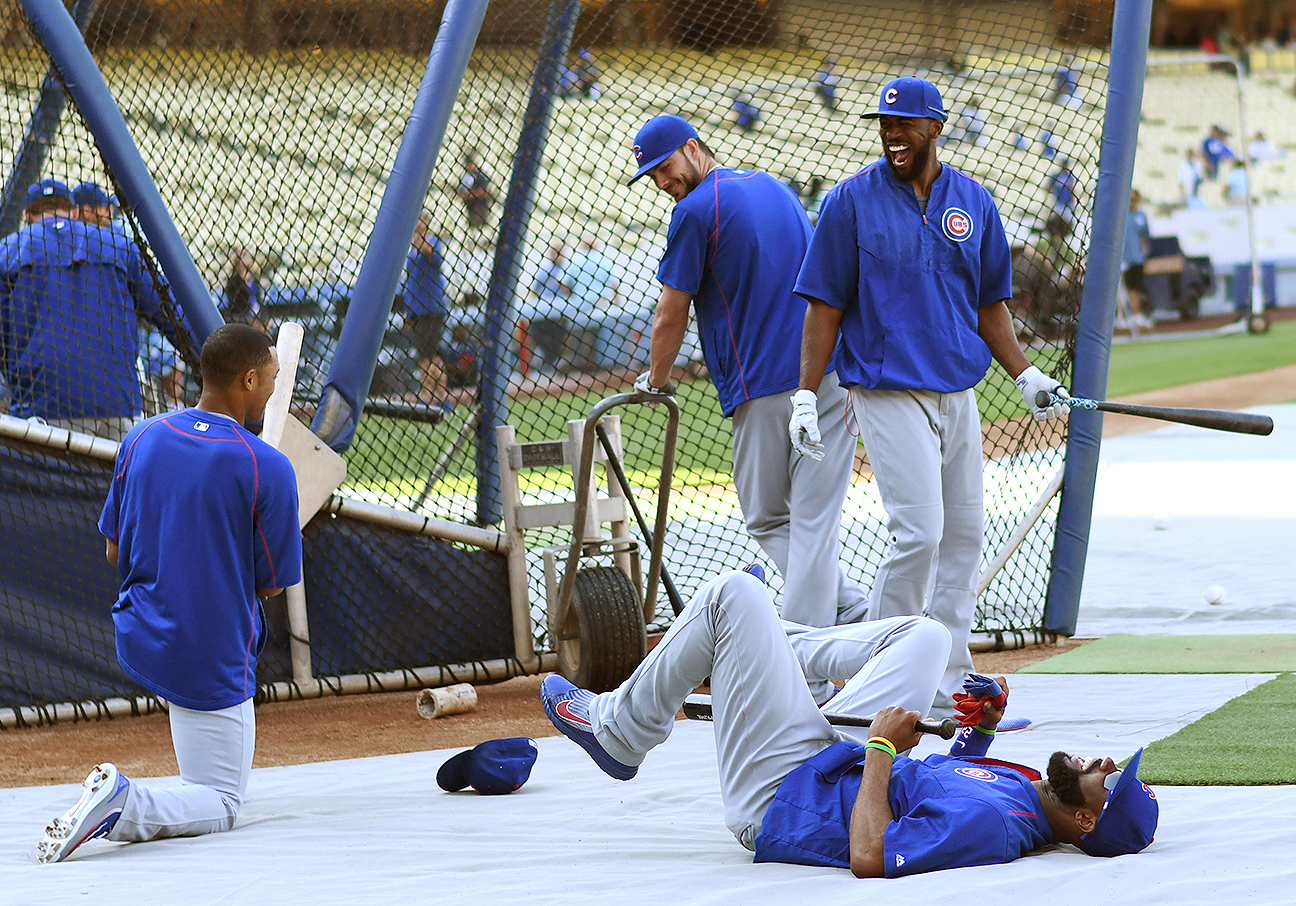 Jason Heyward (on ground), Dexter Fowler, Addison Russell (kneeling) and Kris Bryant share a laugh during batting practice before a game in Los Angeles against the Dodgers. 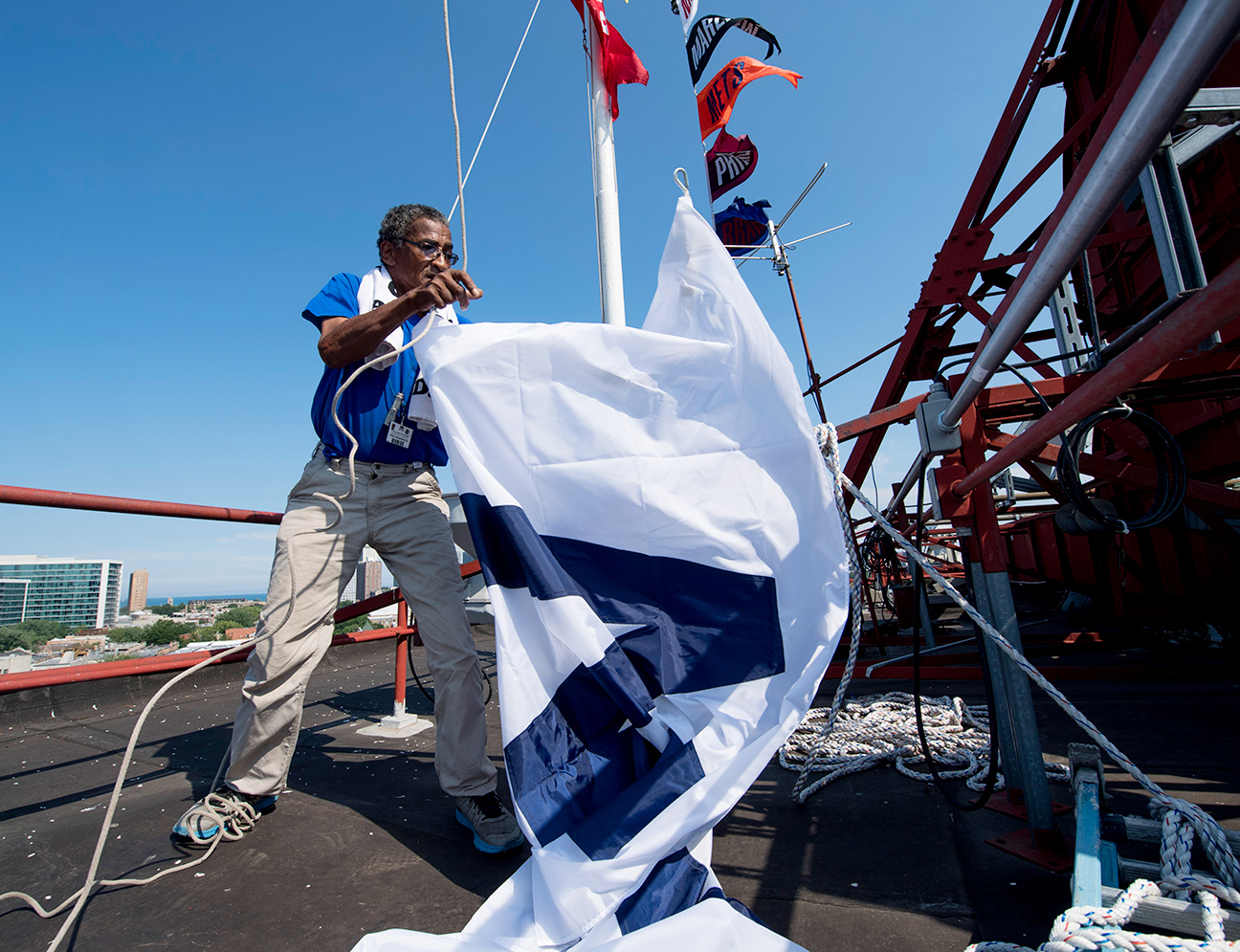 Scoreboard operator Fred Washington raises the W flag after the Cubs beat the Brewers in August. The tradition of flying the W flag after wins was created before Wrigley Field hosted night games as a way to notify travelers on the train whether the Cubs won that day. 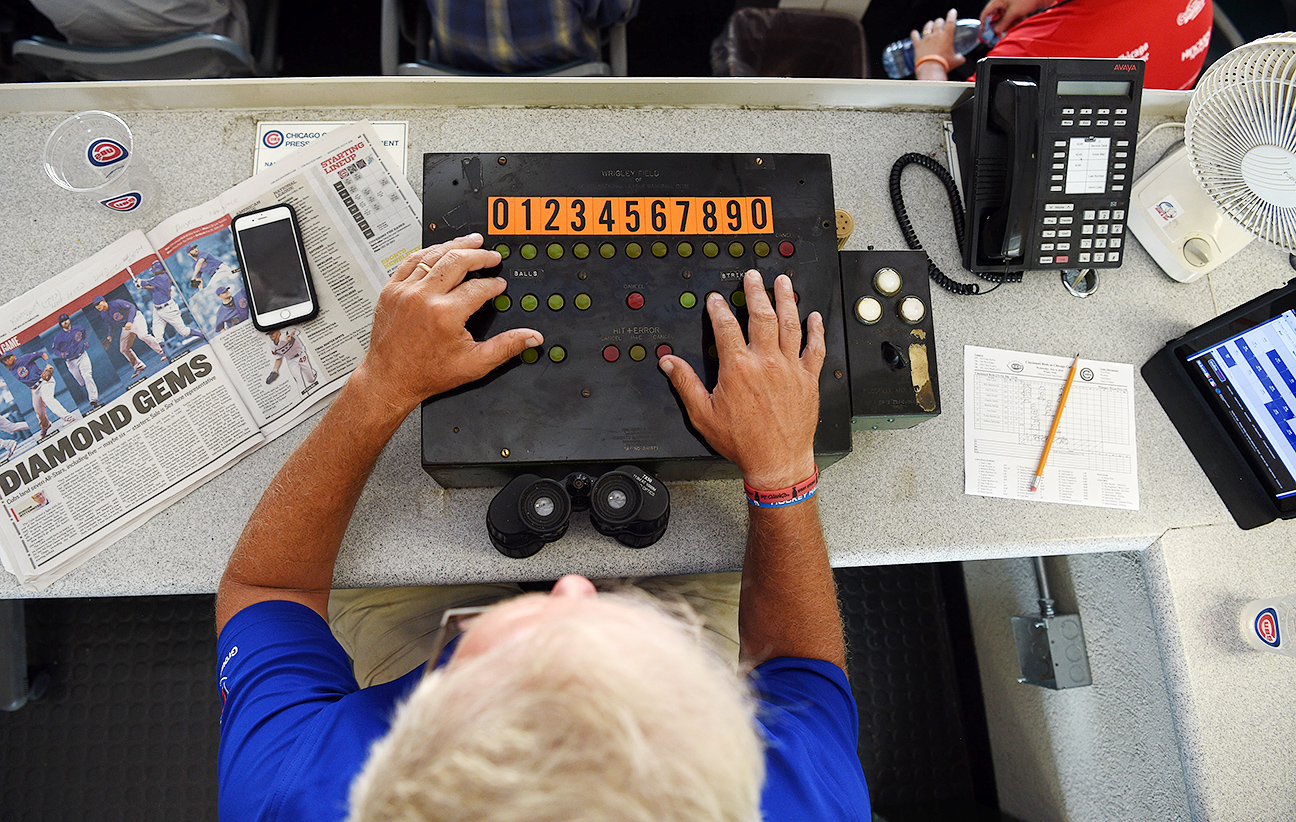 Scoreboard operator Rick Fuhs keeps an eye on the action from the press box as he tallies the balls and strikes on the iconic center-field scoreboard. The scoreboard was installed in the 1930s. 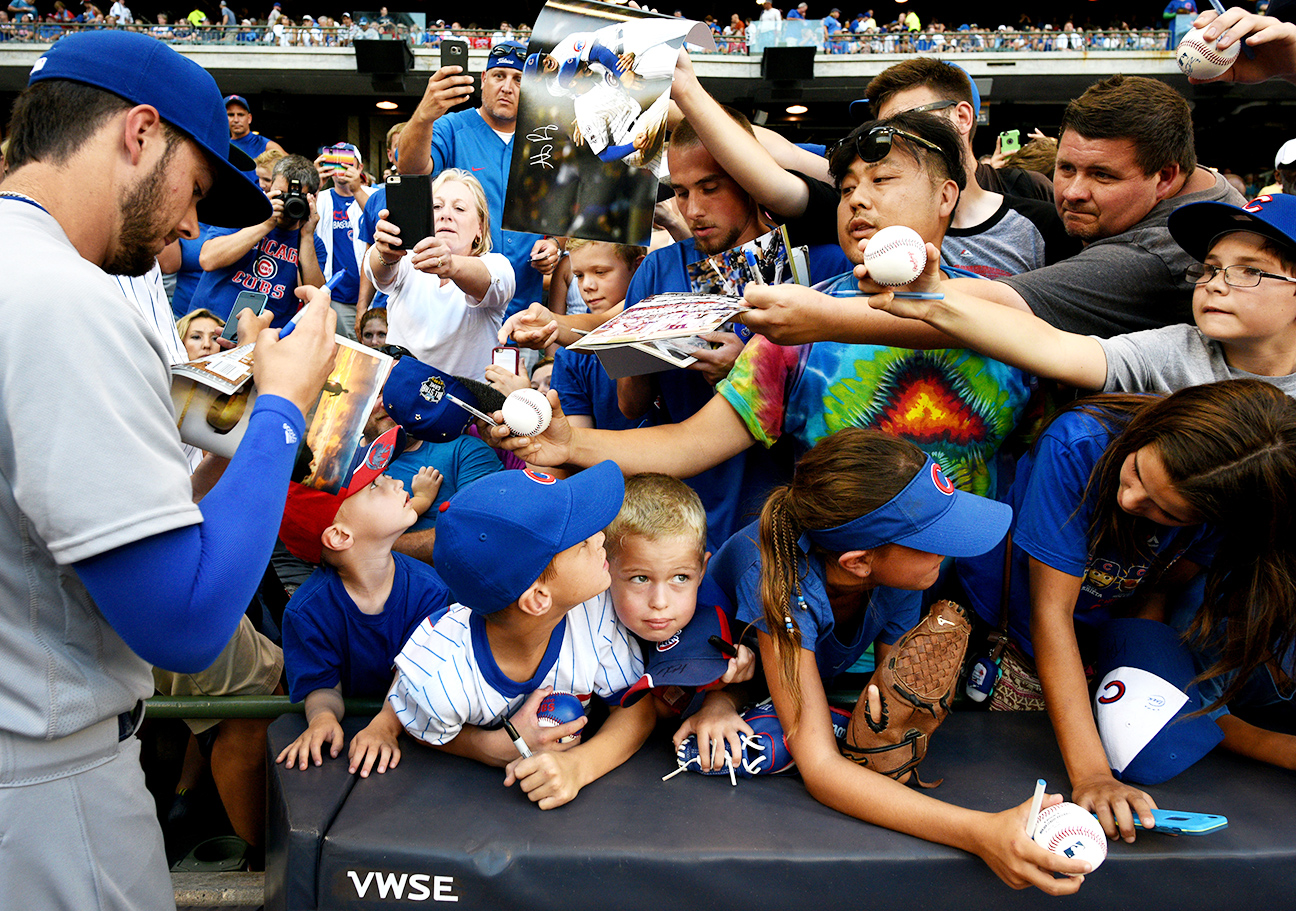 Kris Bryant signs autographs for fans before a game against the Brewers in July. 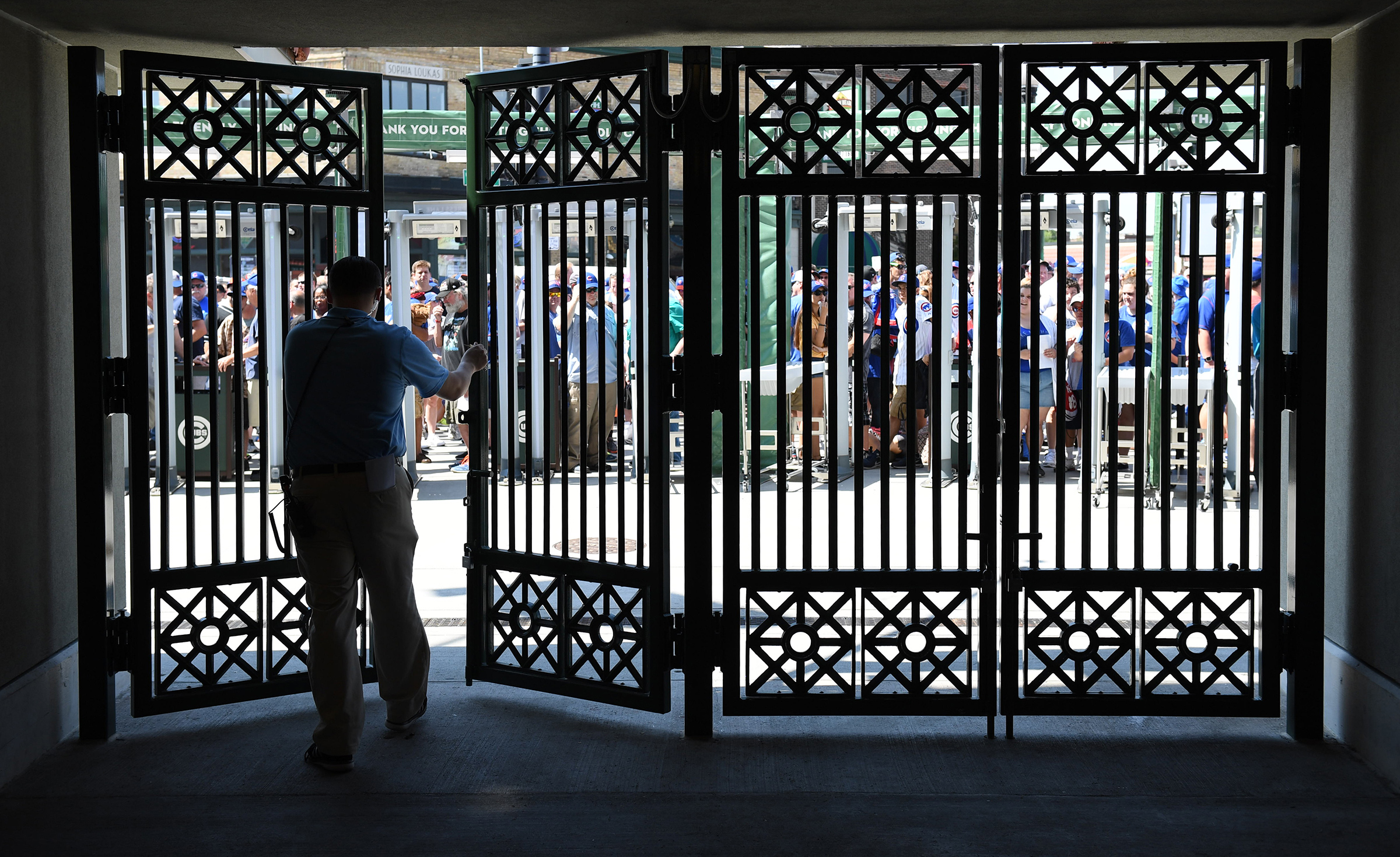 A stadium worker opens the gates to the home plate entrance of Wrigley Field at the intersection of Addison and Clark. 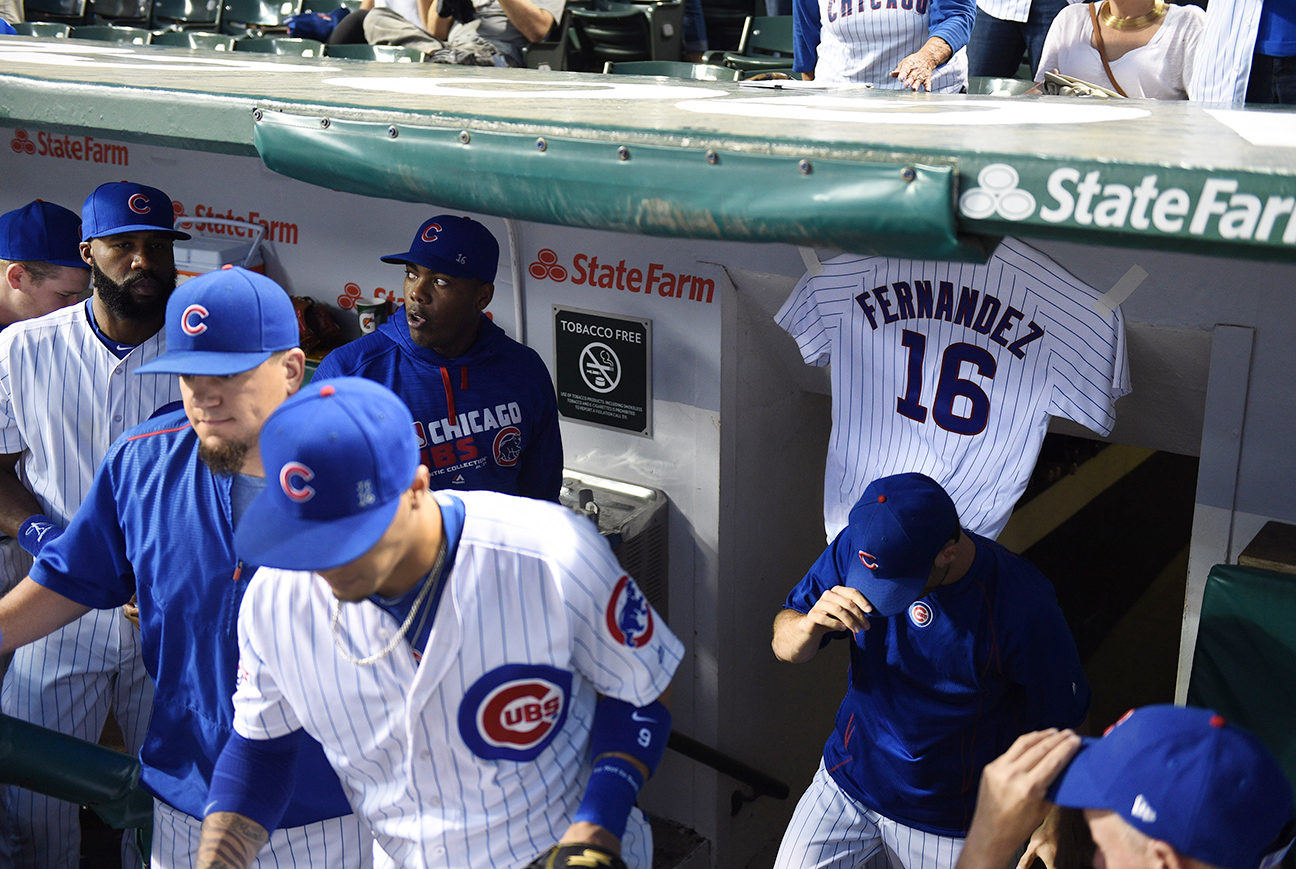 Cubs players exit the dugout with a jersey hanging in tribute to Marlins pitcher Jose Fernandez, who died Sept. 25 in a boating accident. 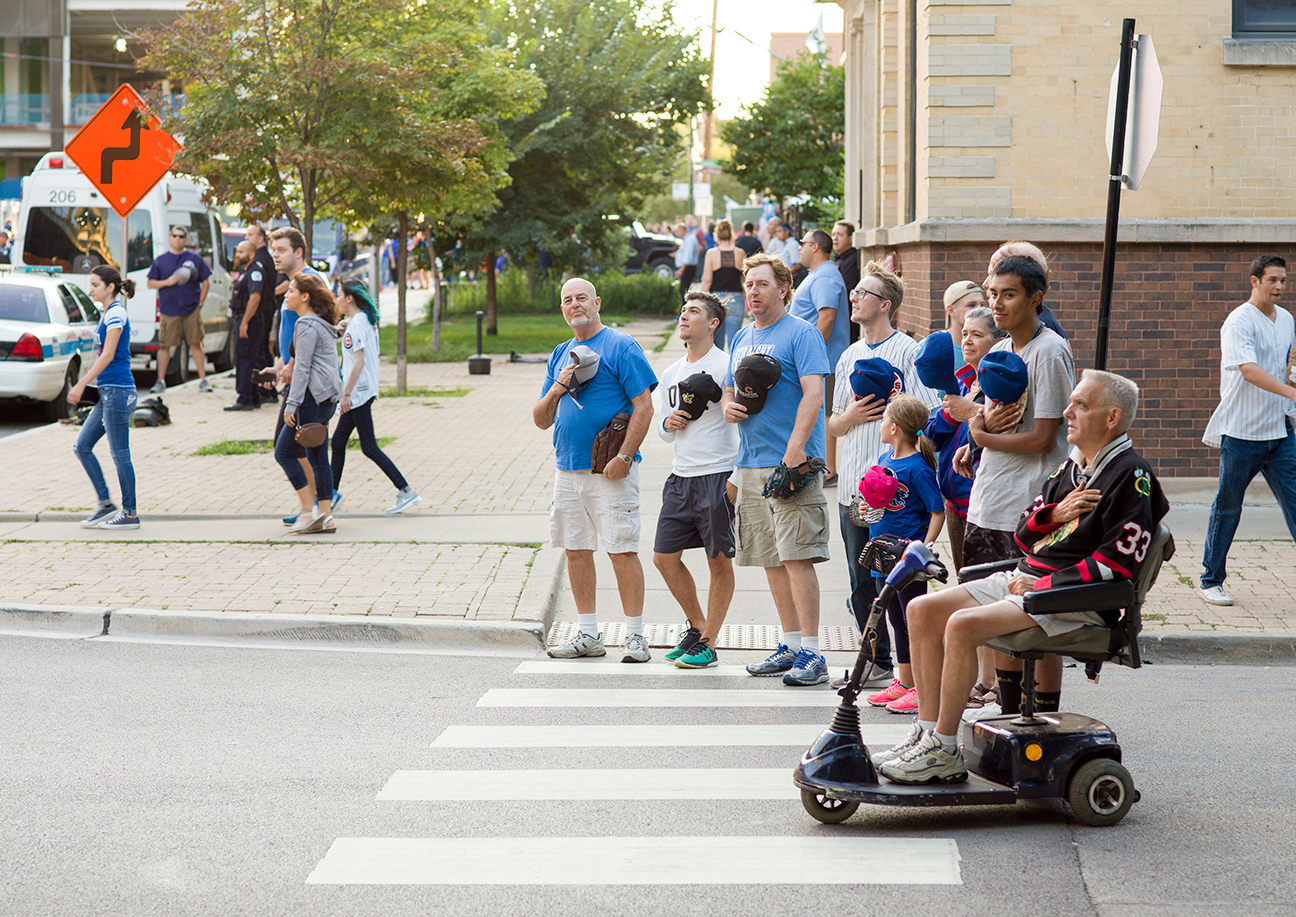 Ballhawks outside Wrigley Field stand at the corner of Waveland and Kenmore for the National Anthem. 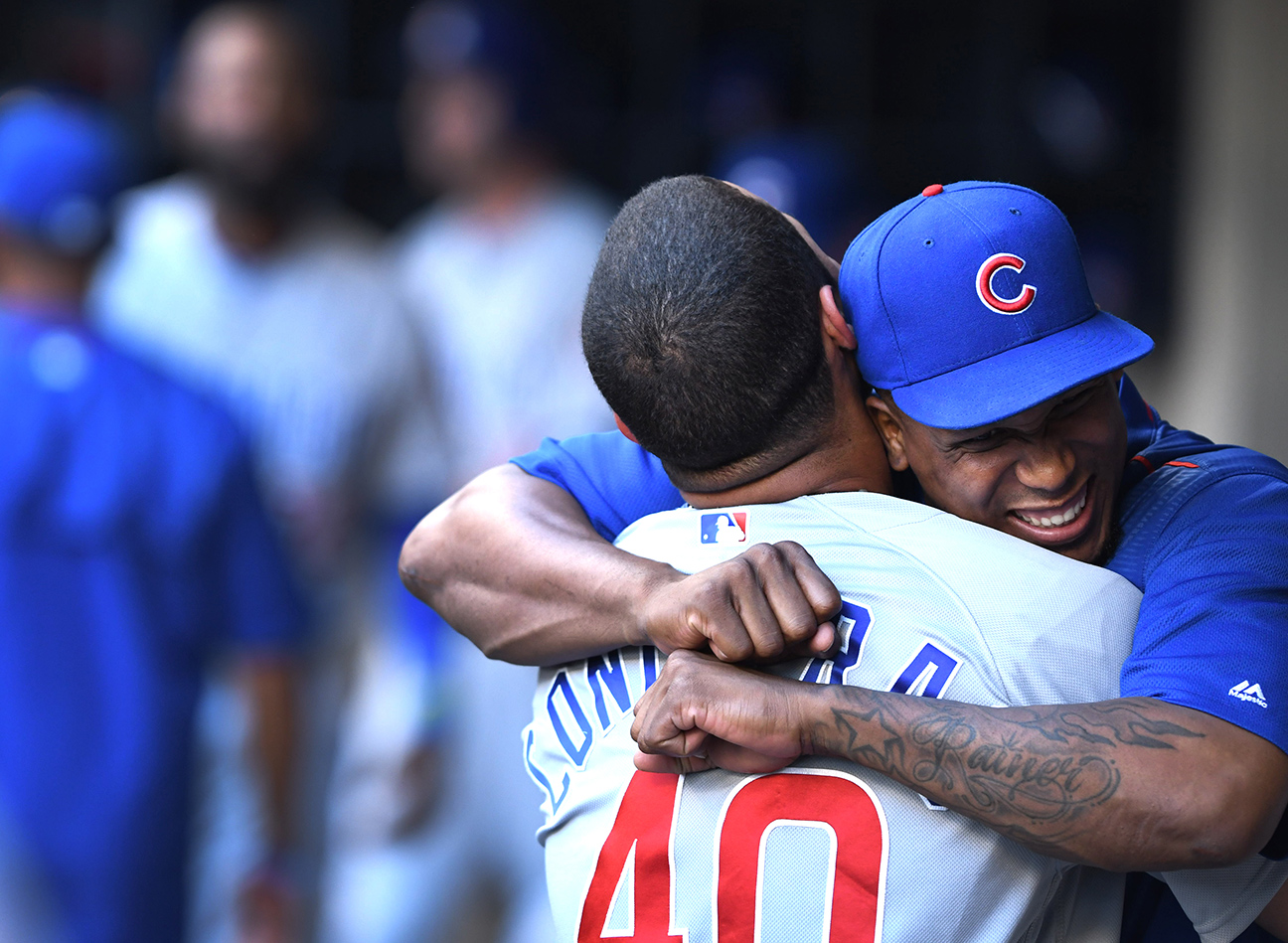 Rookie catcher Willson Contreras and relief pitcher Pedro Strop embrace with a hug before the Cubs take on the Brewers at Miller Park. 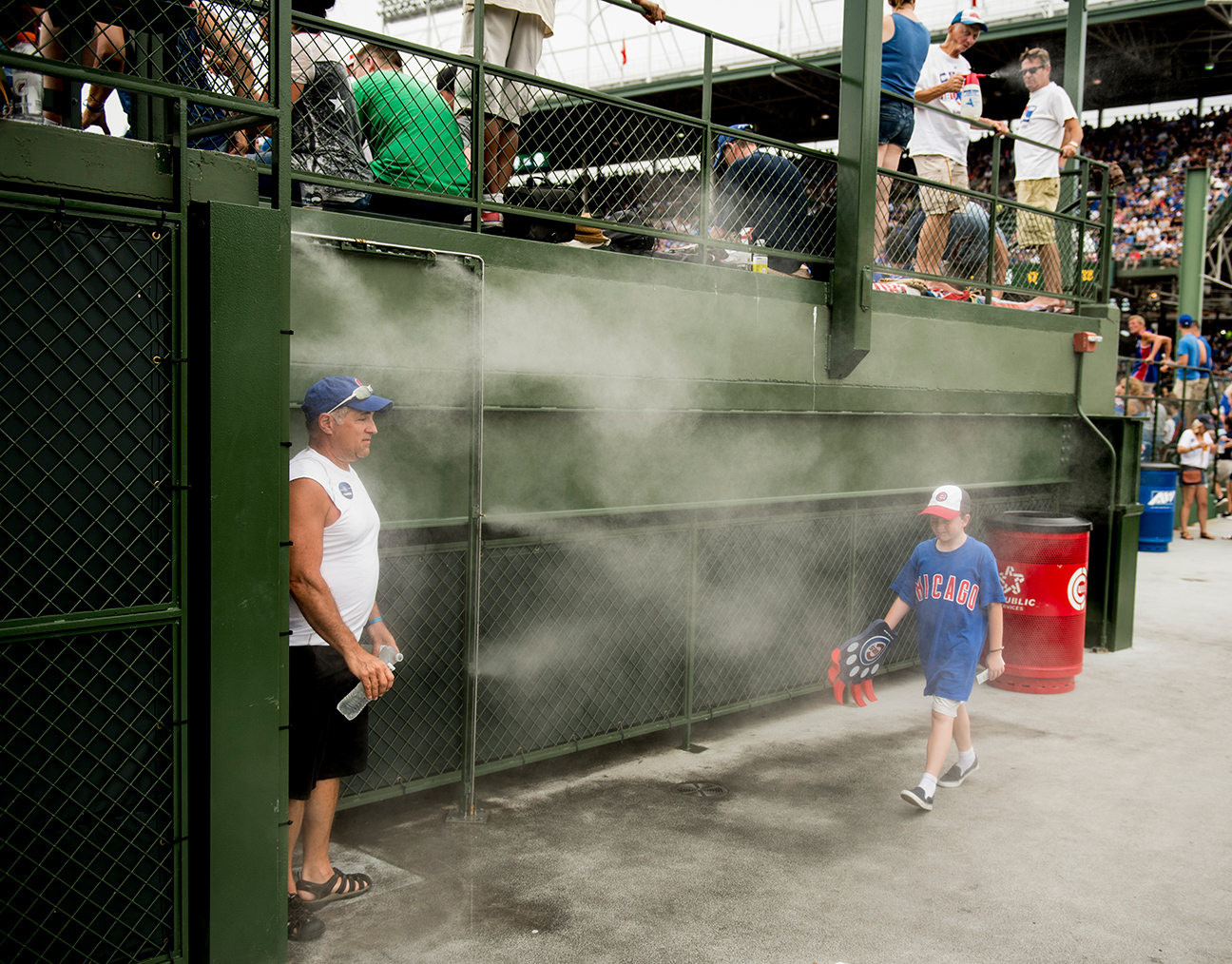 Fans cool themselves in misters to seek refuge from the sweltering heat in the outfield bleachers. 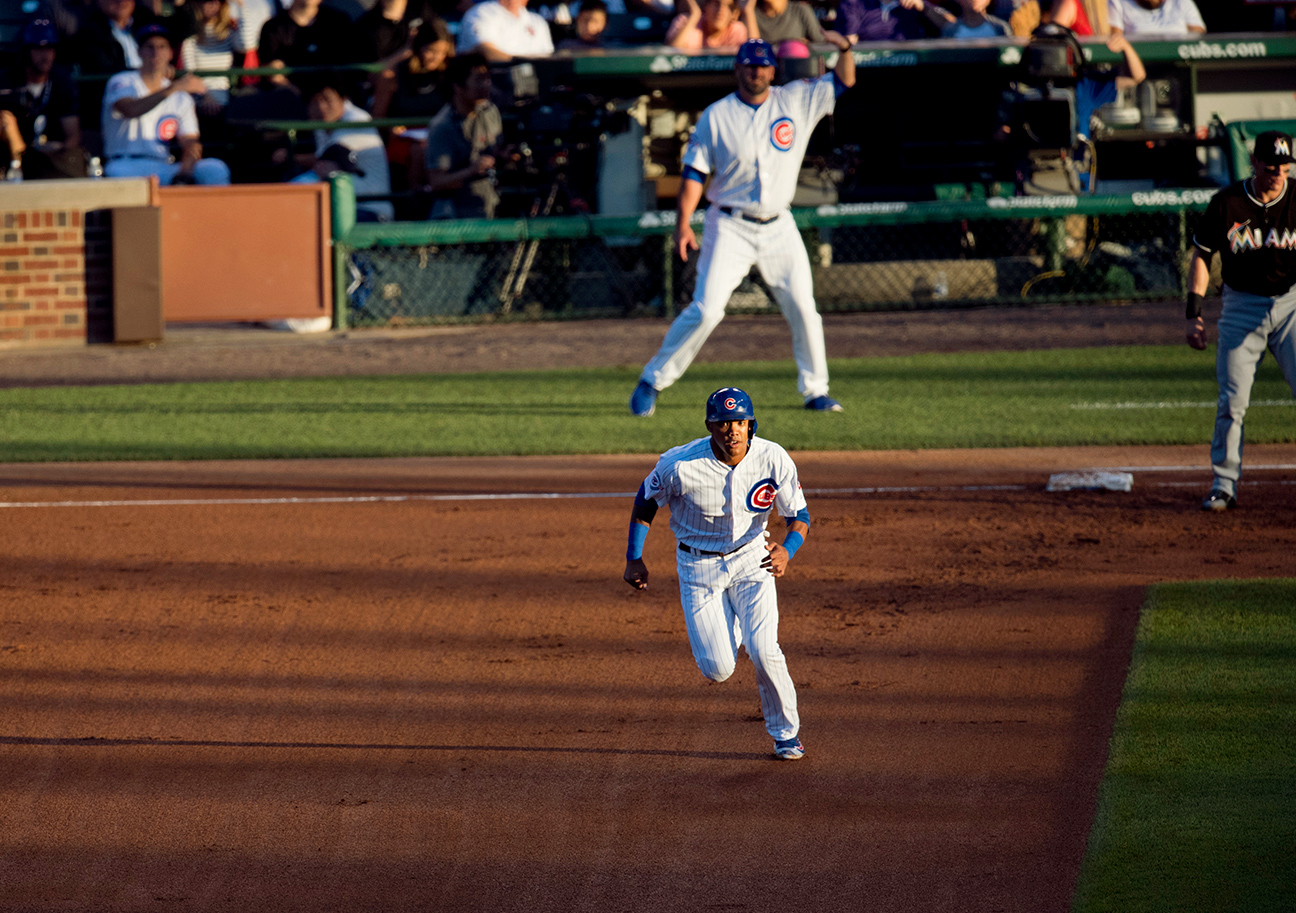 Addison Russell runs toward second base during a game against the Marlins on Aug. 1. 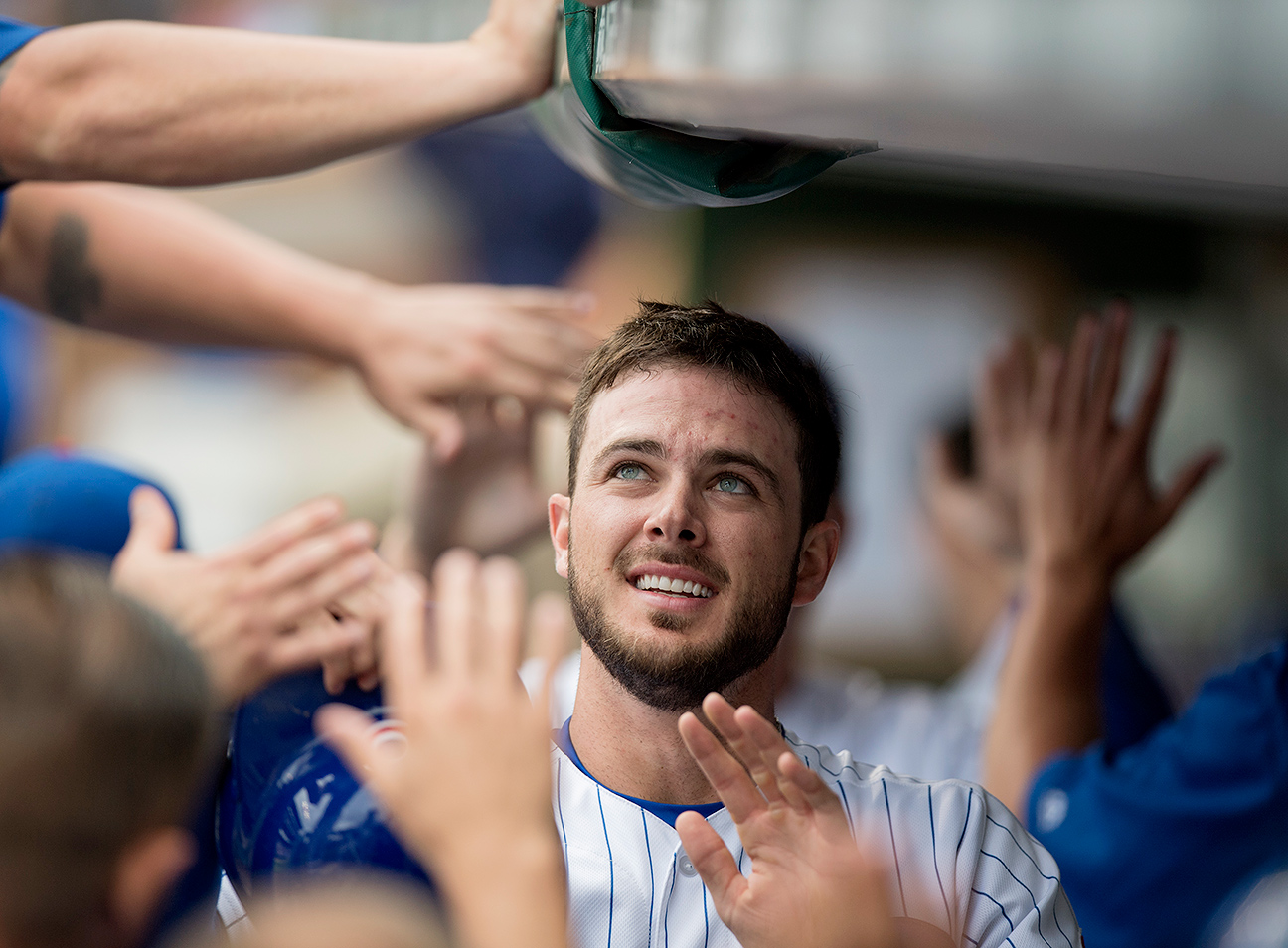 Kris Bryant celebrates after scoring a run against the Texas Rangers. 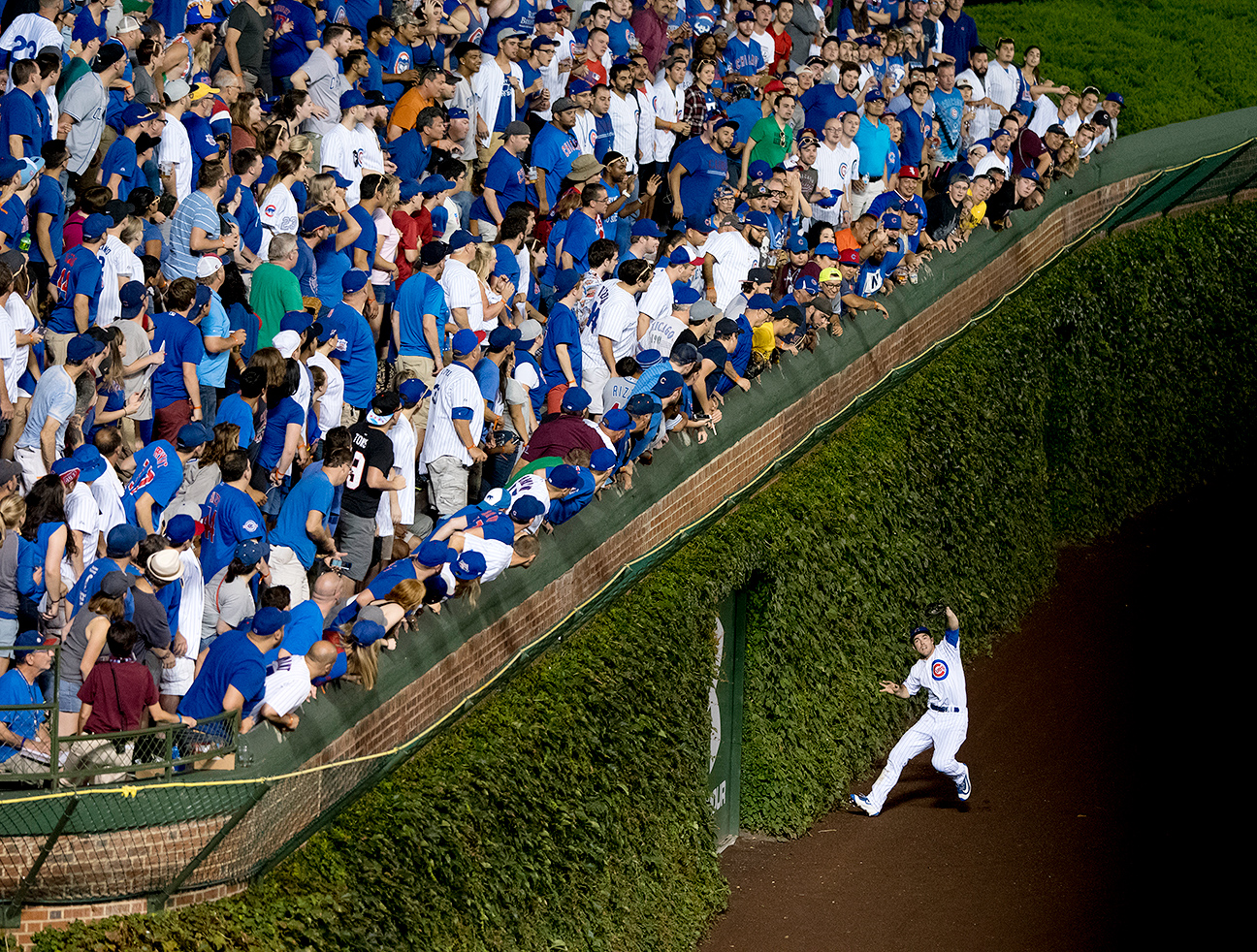 Outfielder Matt Szczur snags a fly ball just a step away from the ivy-covered left-field wall. 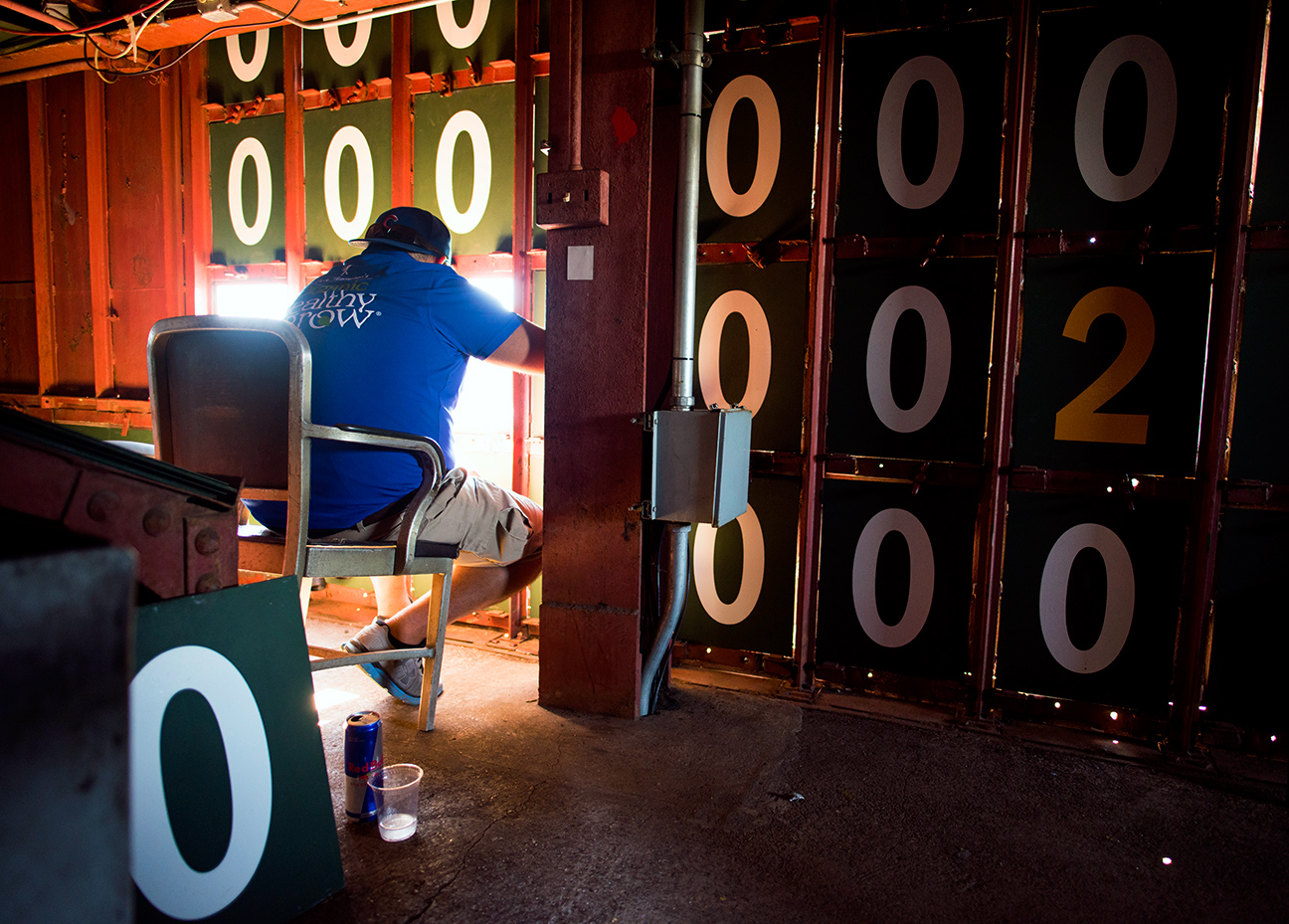 A scoreboard operator eyes the action as he turns the numbers tallying the runs and hits in a game against the San Francisco Giants on Sept. 3. 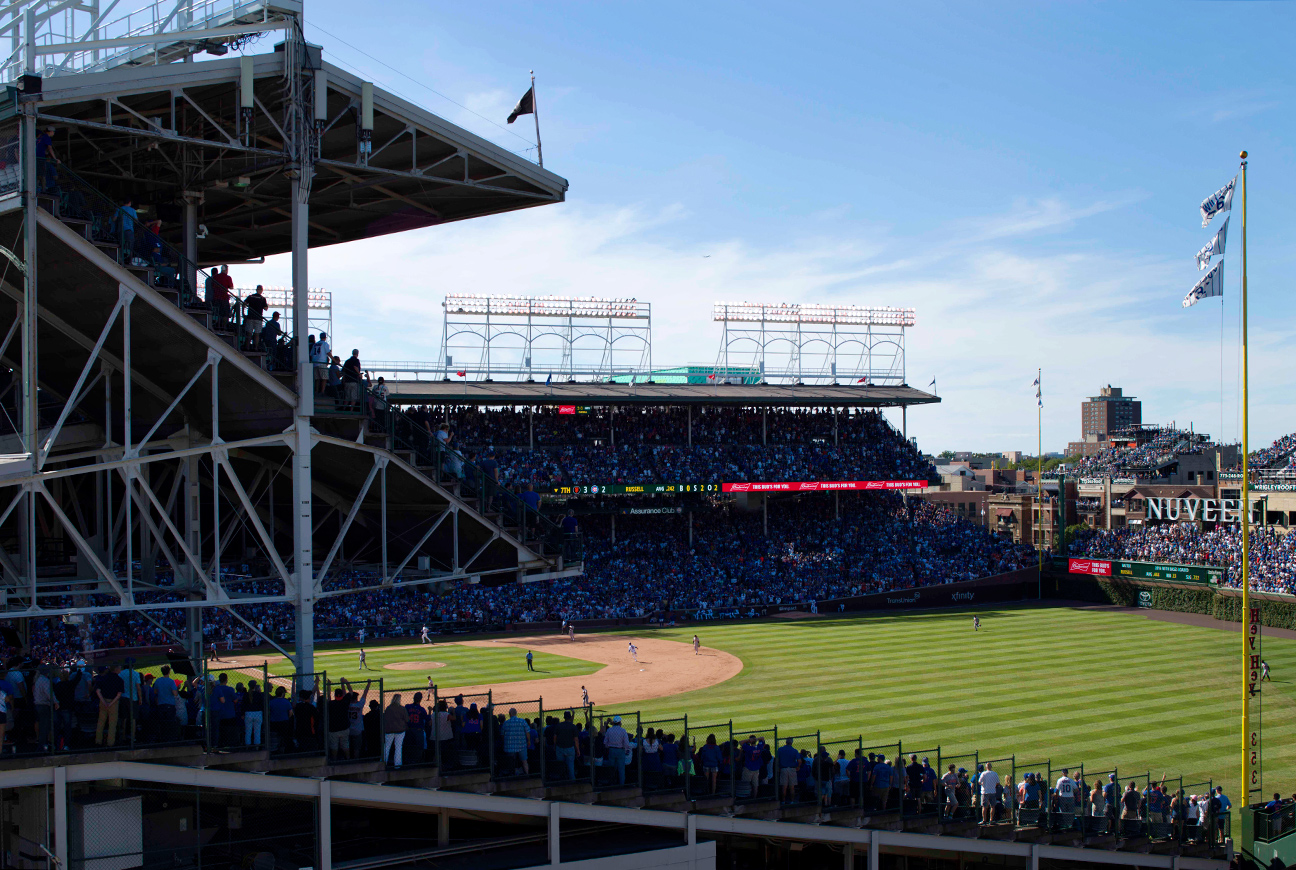 A view inside Wrigley Field from one of the rooftop bleachers on Sheffield Avenue. 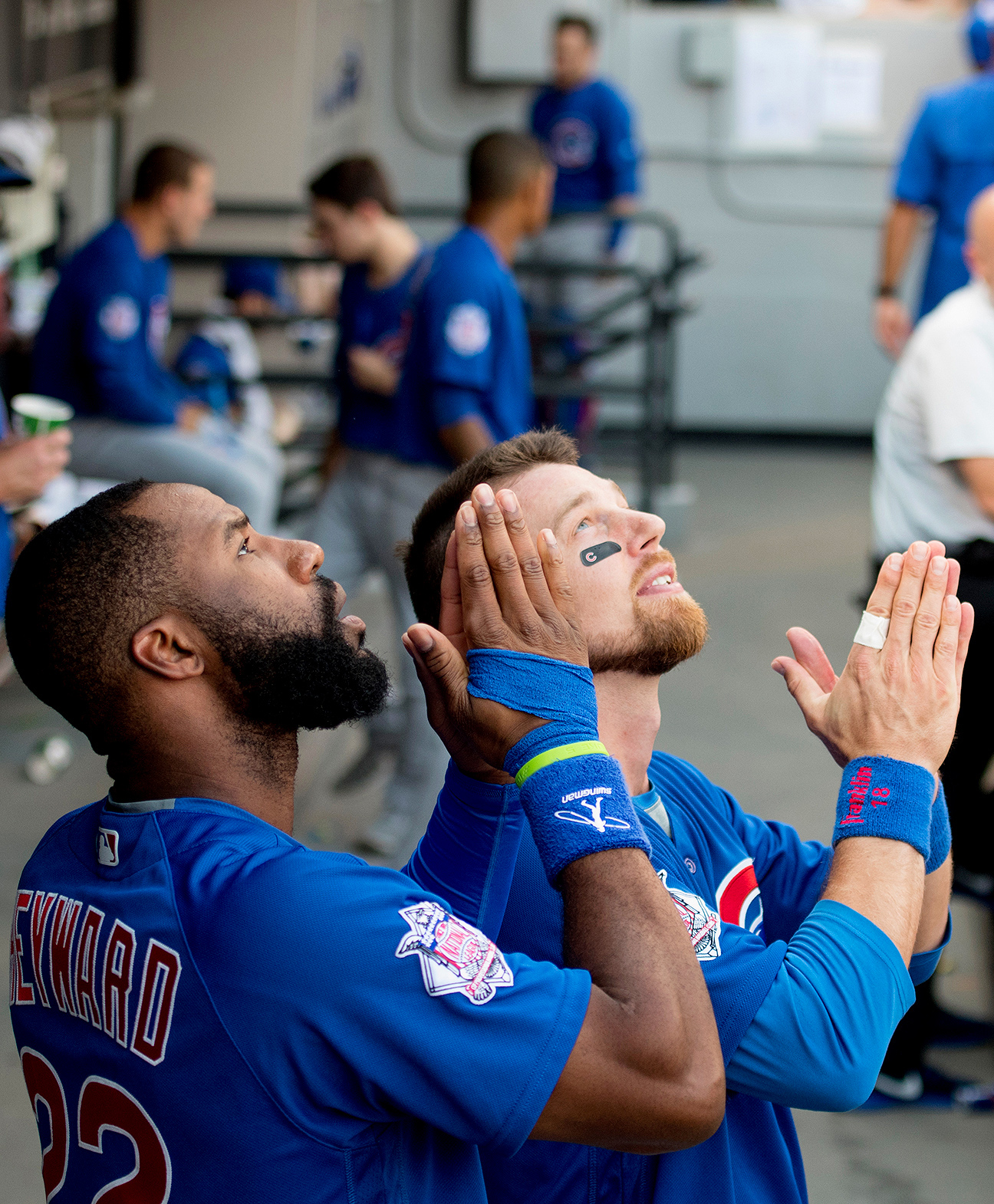 Cubs infielder Ben Zobrist and outfielder Jason Heyward go through a pregame ritual before the Cubs take on the White Sox at U.S. Cellular Field. 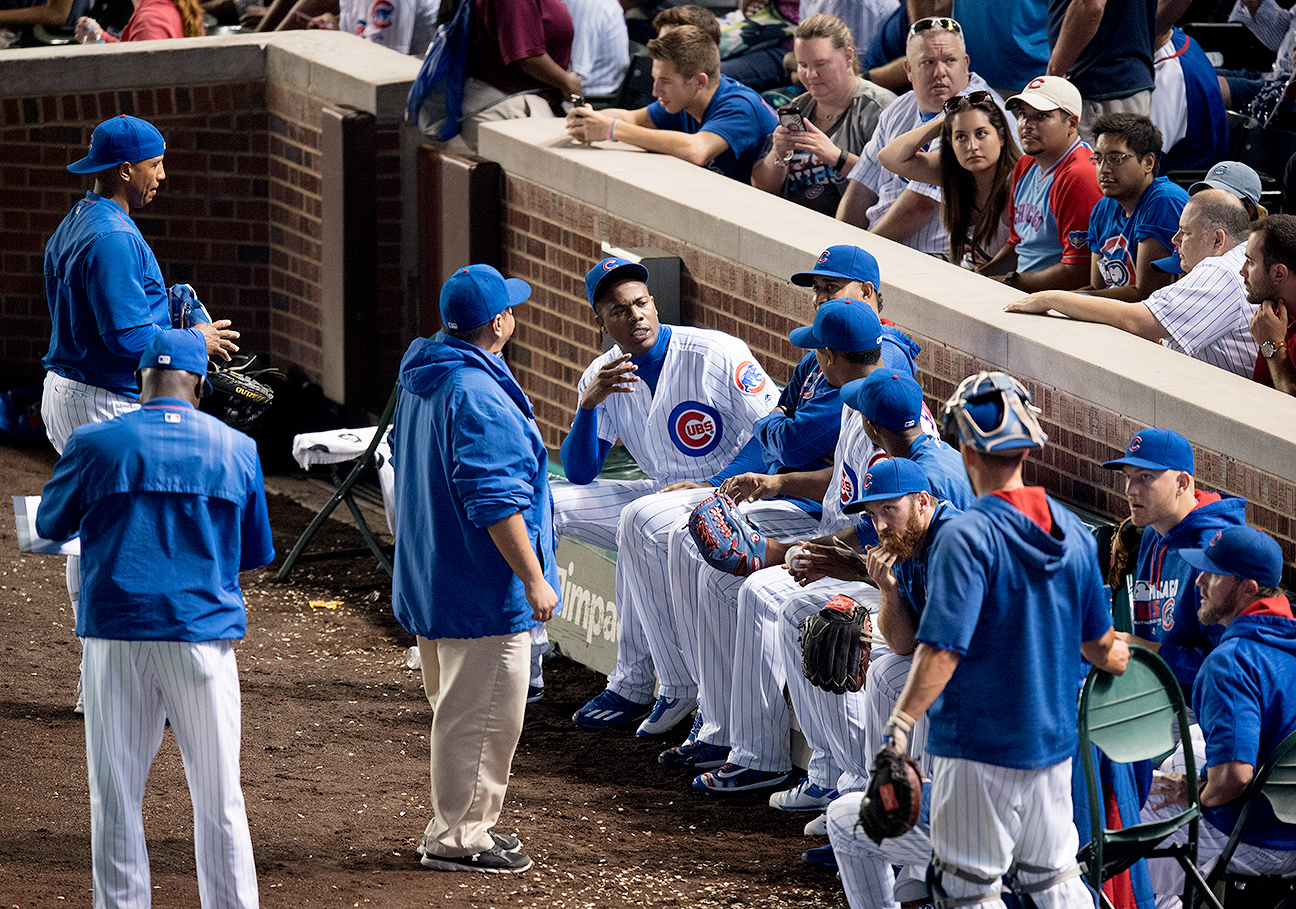 Aroldis Chapman talks with his teammates in the bullpen. 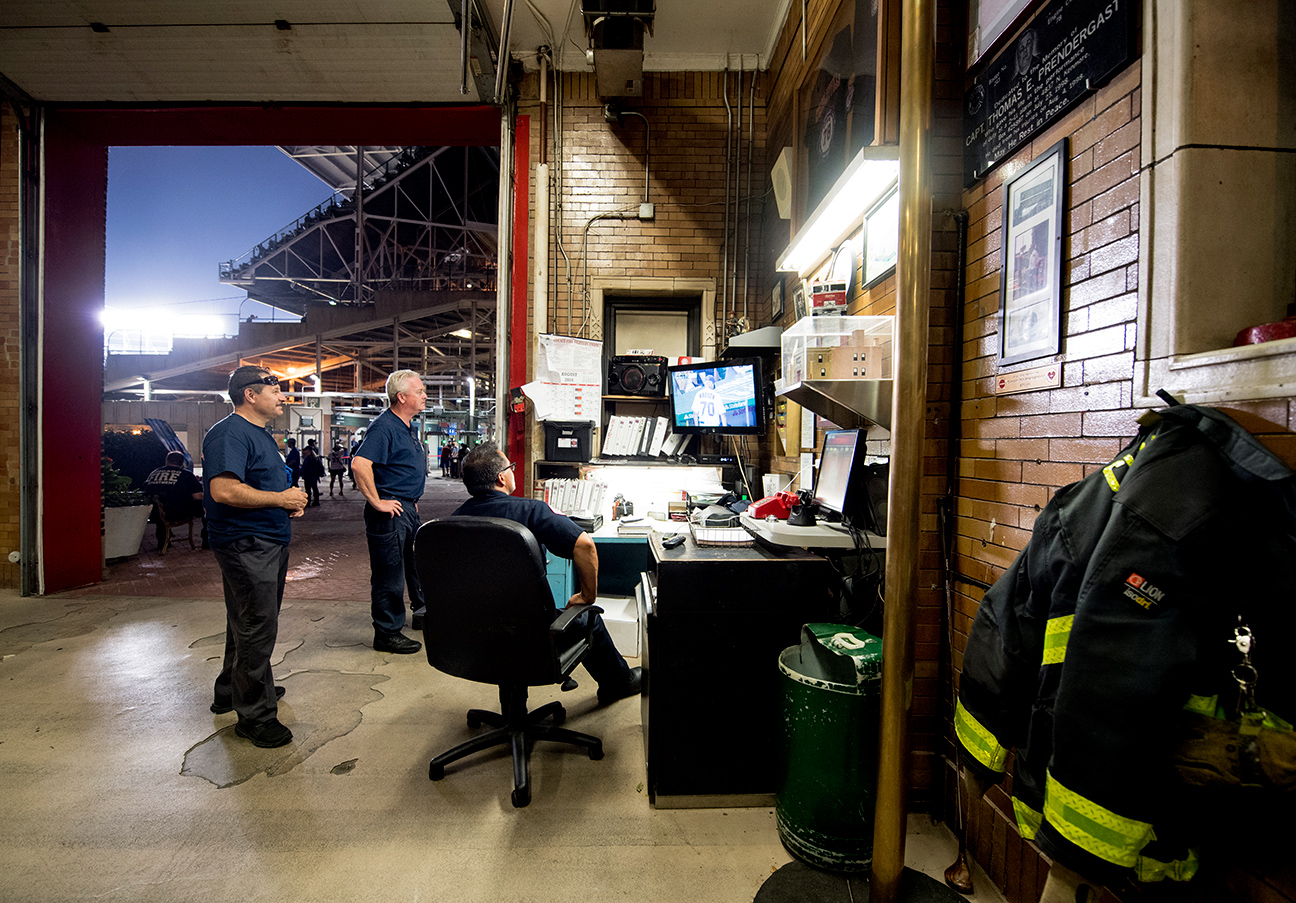 Firefighters stationed in Wrigleyville's Engine 78 station across from the left-field entrance of Wrigley Field watch the evening's action on television. 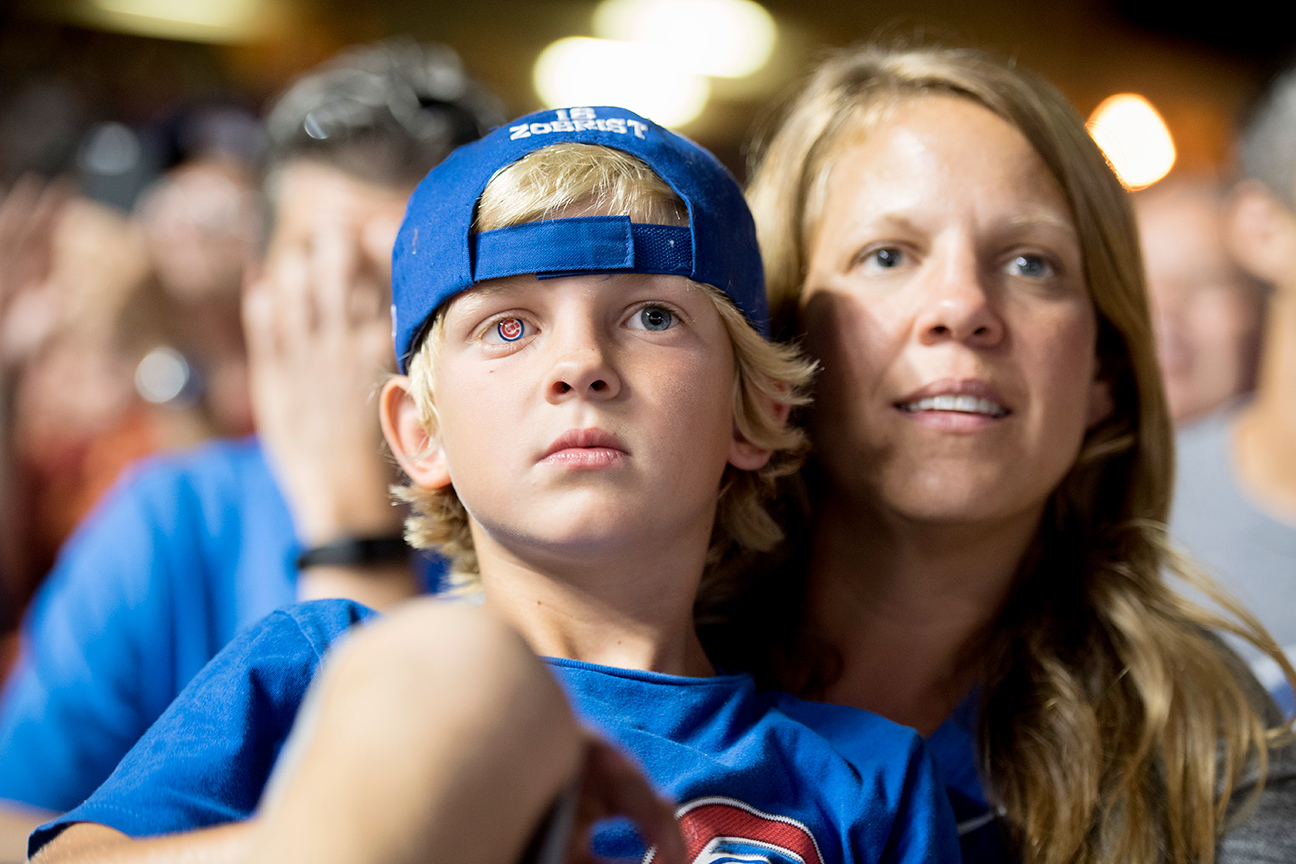 Young Cubs fan Beckham Zobrist takes in the game with his mother Erin Zobrist as the Cubs take on the Cardinals in August. Beckham lost his eye to retinoblastoma -- a rare form of cancer -- and after being teased by other children, pleaded for a new eye from his parents. While the true eye he was hoping for could not happen, his parents instead got him the next best thing ... a prosthetic eye with the logo of his favorite team, the Cubs. 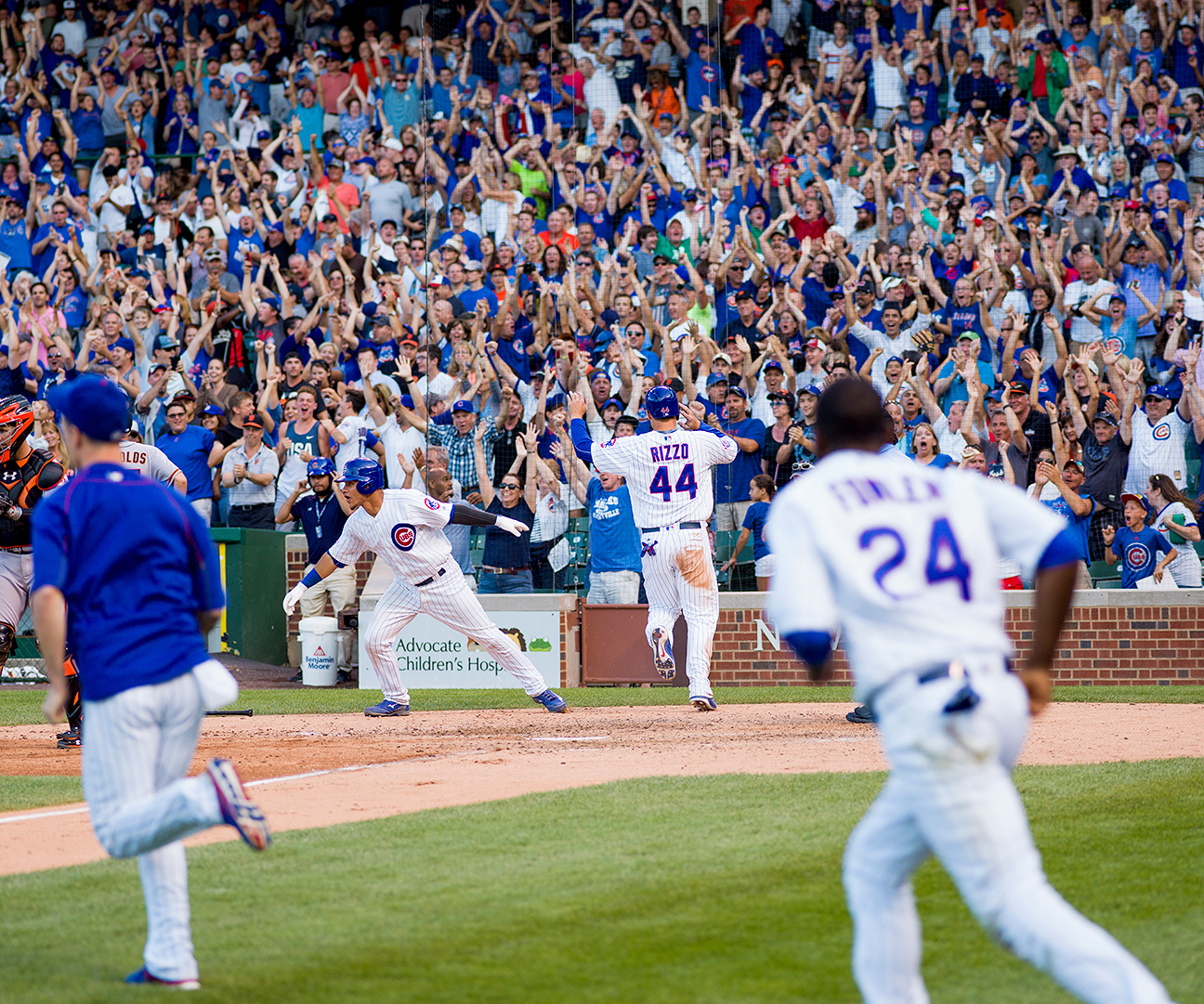 Anthony Rizzo scores the winning run in a walk-off over the Giants on Sept. 4. 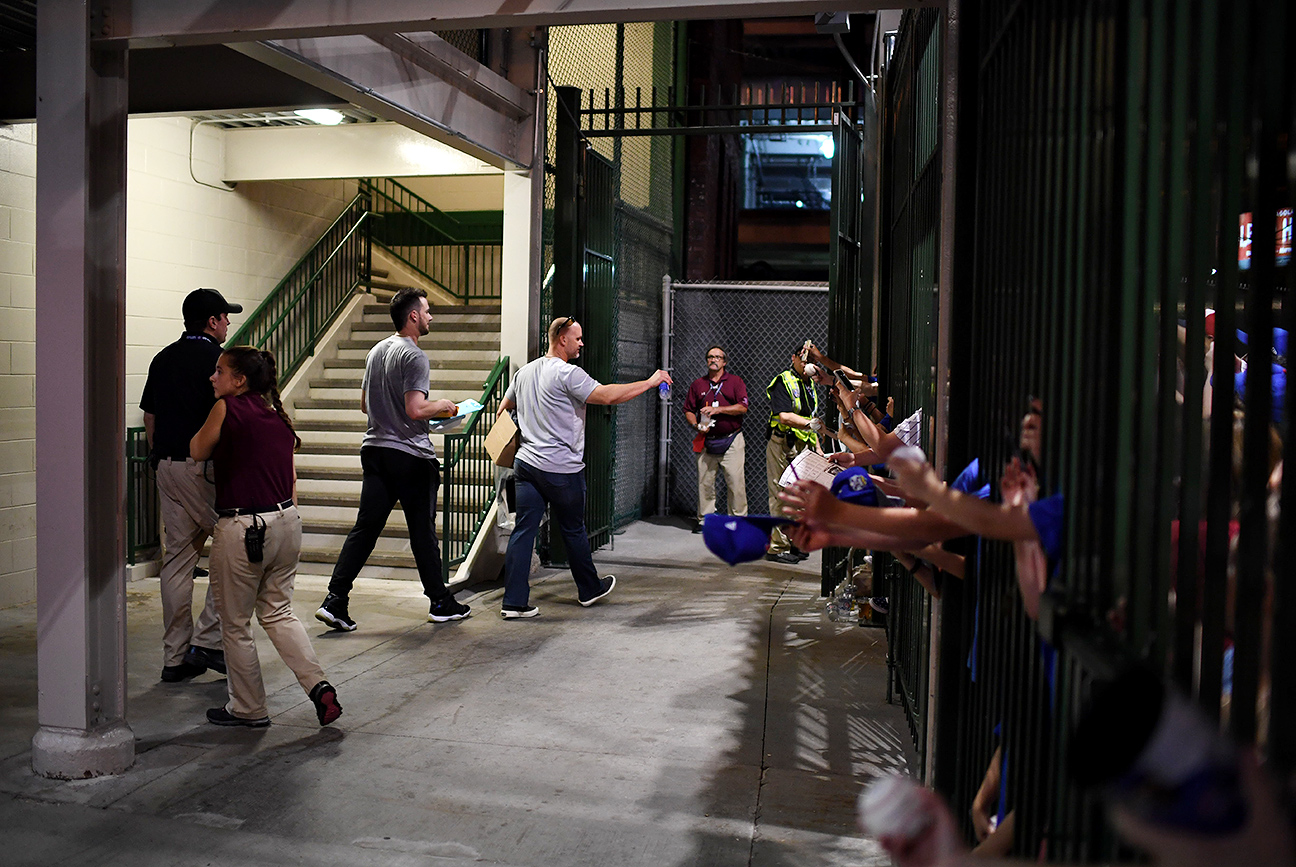