he Ohio State University Marching Band is known for its precise and disciplined performances. But along with the hard work, there are a lot of laughs and camaraderie that go into perfecting the pieces that pump up the Buckeyes.

Last week, as they prepped for the ultimate assignment at the College Football Playoff Semifinal at the PlayStation Fiesta Bowl, band members joked and sang as they loaded up and traveled to Arizona.

Busses filled with 243 band members and two moving trucks loaded with 235 instruments for the 228 instrumentalists from the band. (If you're wondering about the seven-instrument surplus, it's for the same reason football teams take extra helmets and gear. You never know what will happen during the game, even for the band.)

The Best Damn Band in the Land has a serious following. Fan Mario Palladino drove 27 hours from Columbus to Phoenix to see the band at the Fiesta Bowl, giving members high fives and hugs in the stands as they filed in to their section in front of the end zone.

And they aren't just talented musicians who can memorize new music and marching formations for every home football game. As they were gearing up for their trip to Phoenix on Dec. 27, trumpet player Austin Brizee was caught on camera making a 55-yard field goal, which earned him a future tryout with the football team. After the Buckeyes' loss in Phoenix, fans on Twitter were calling for Brizee to step in as the kicker, which was comic relief for the exhausted band members as they made their way back to the Scottsdale Embassy Suites after the season-ending game (which Clemson won 31-0). 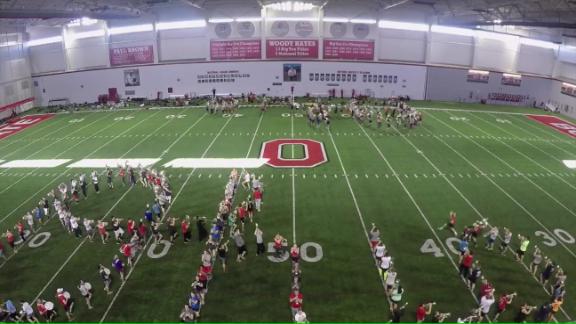 The Ohio State band practices the famous dotting of the "I" at their practice facility in Columbus, Ohio. 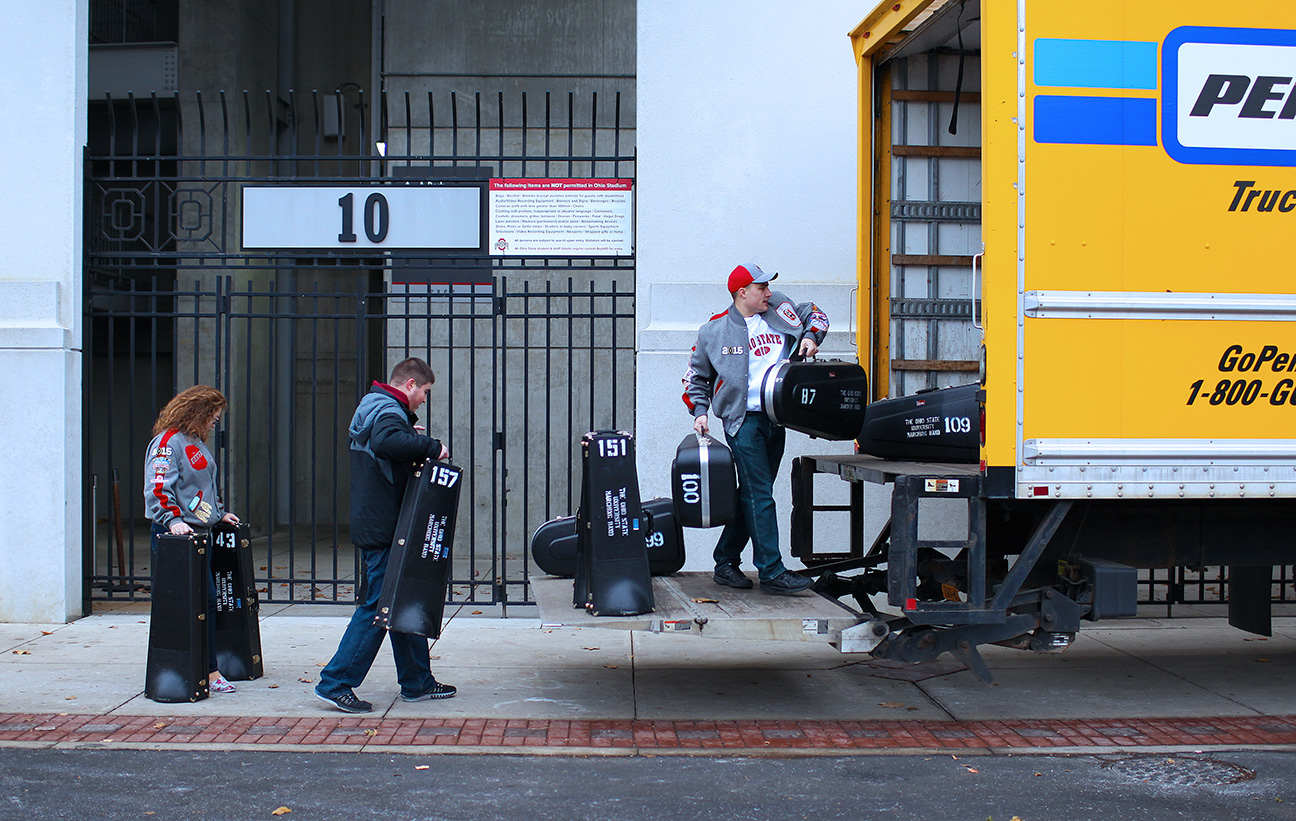 The Ohio State University Marching Band members Emily Knipe (far left, trombone) Derek Richardson (E-flat cornet) and Cam Chandler (far right, baritone) pack up the instruments that will be driven to the Fiesta Bowl in Arizona. Band members packed up around 235 instruments, enough for the 228 instrumentalists, plus a few extras. 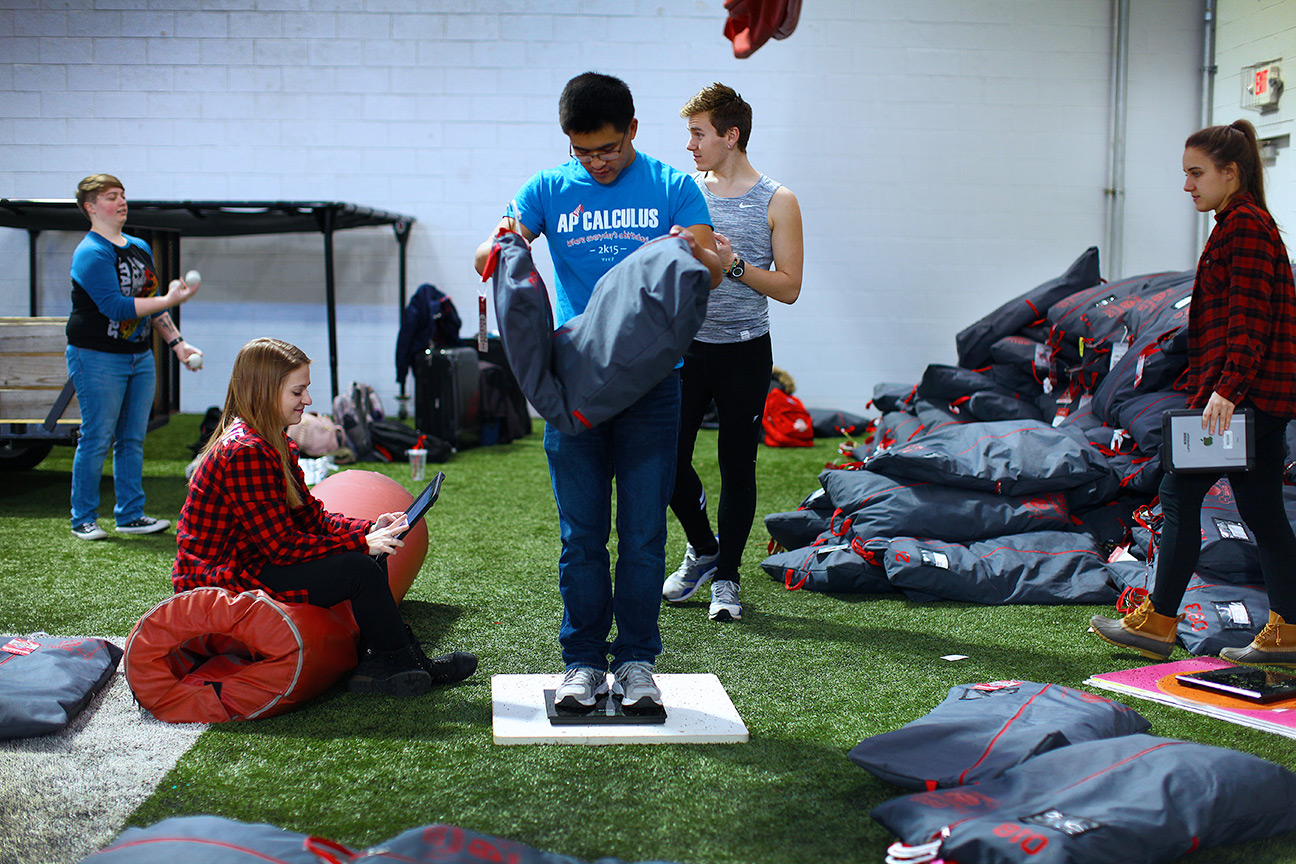 Student staff members weigh garment bags for the flight manifesto before they're packed up and shipped off to the Fiesta Bowl. Band members, from left to right: Jenna Messer, Rachel Helbing, Patrick Wang, Lucas Bushrow and Savannah Brown. 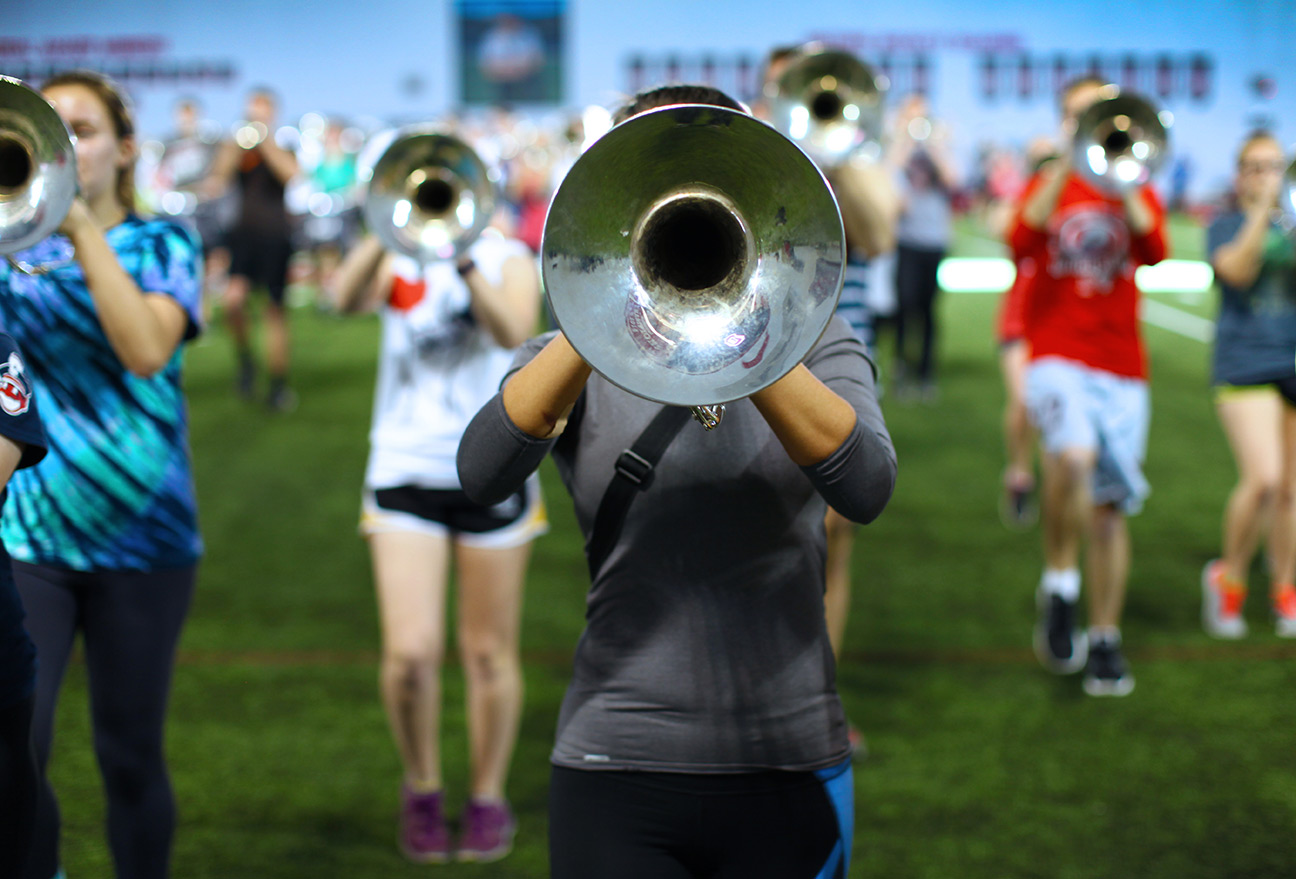 Mellophone player Haley Rohaley practices with the rest of her section before the band headed off to the Fiesta Bowl. 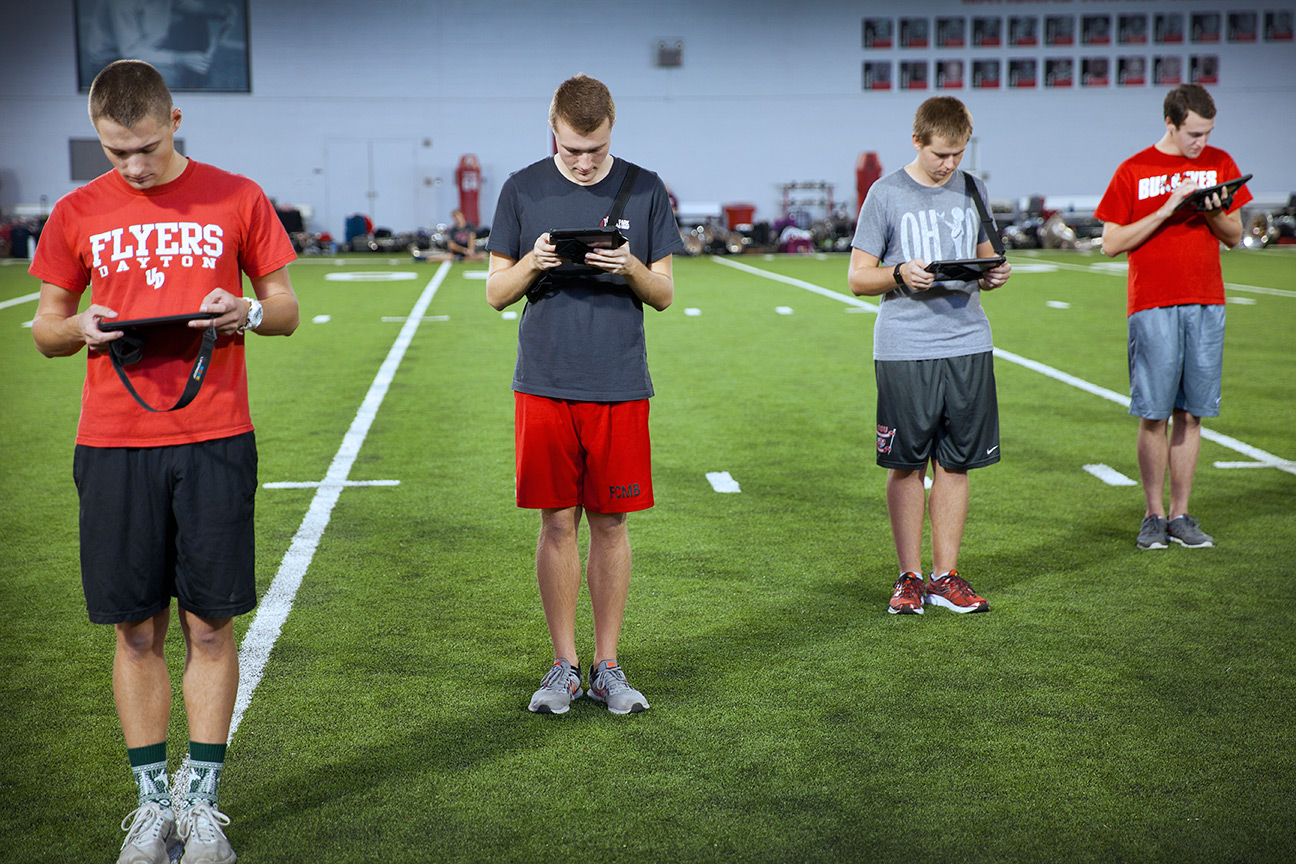 Members of The Ohio State University Marching Band (from left to right) Connor Grooms, Ian Meadows, Alan Weide and Tyler Finnegan go over their marching steps on iPads during a final practice before heading off to Arizona. 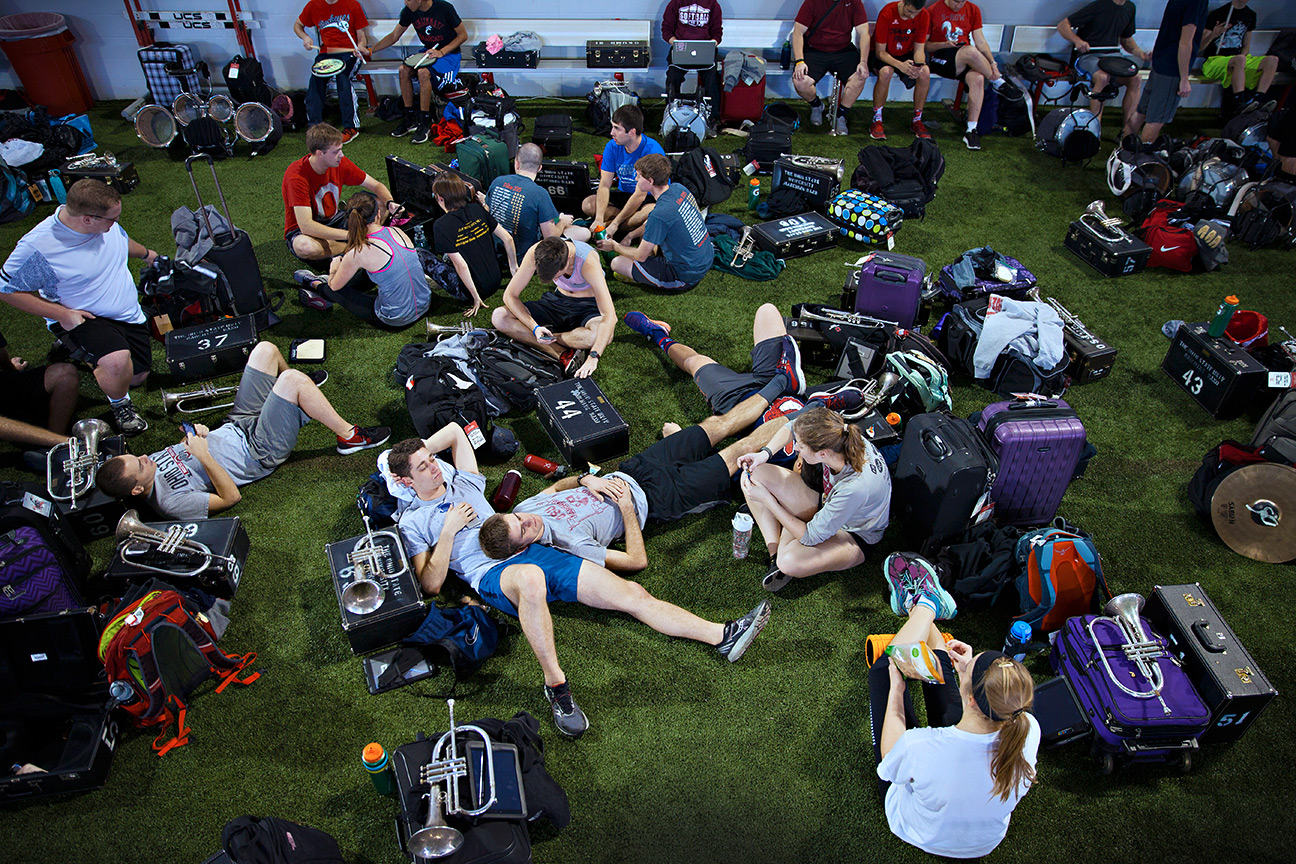 During a break at their last home practice, Ohio State band members relax with their luggage before heading to the Fiesta Bowl. 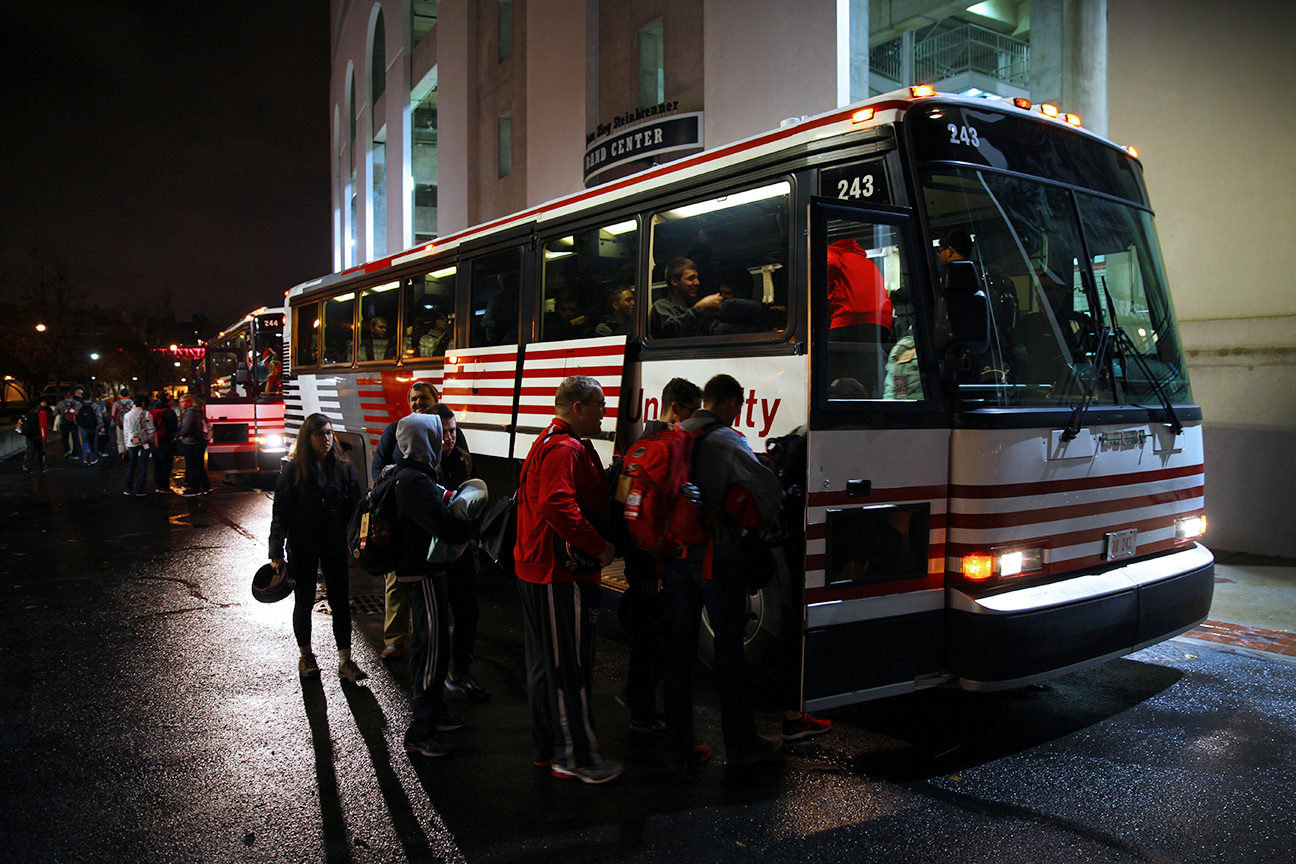 At about 3:40 a.m. local time, Ohio State band members boarded buses to go to Rickenbacker Airport to catch flights to Arizona for the Fiesta Bowl. 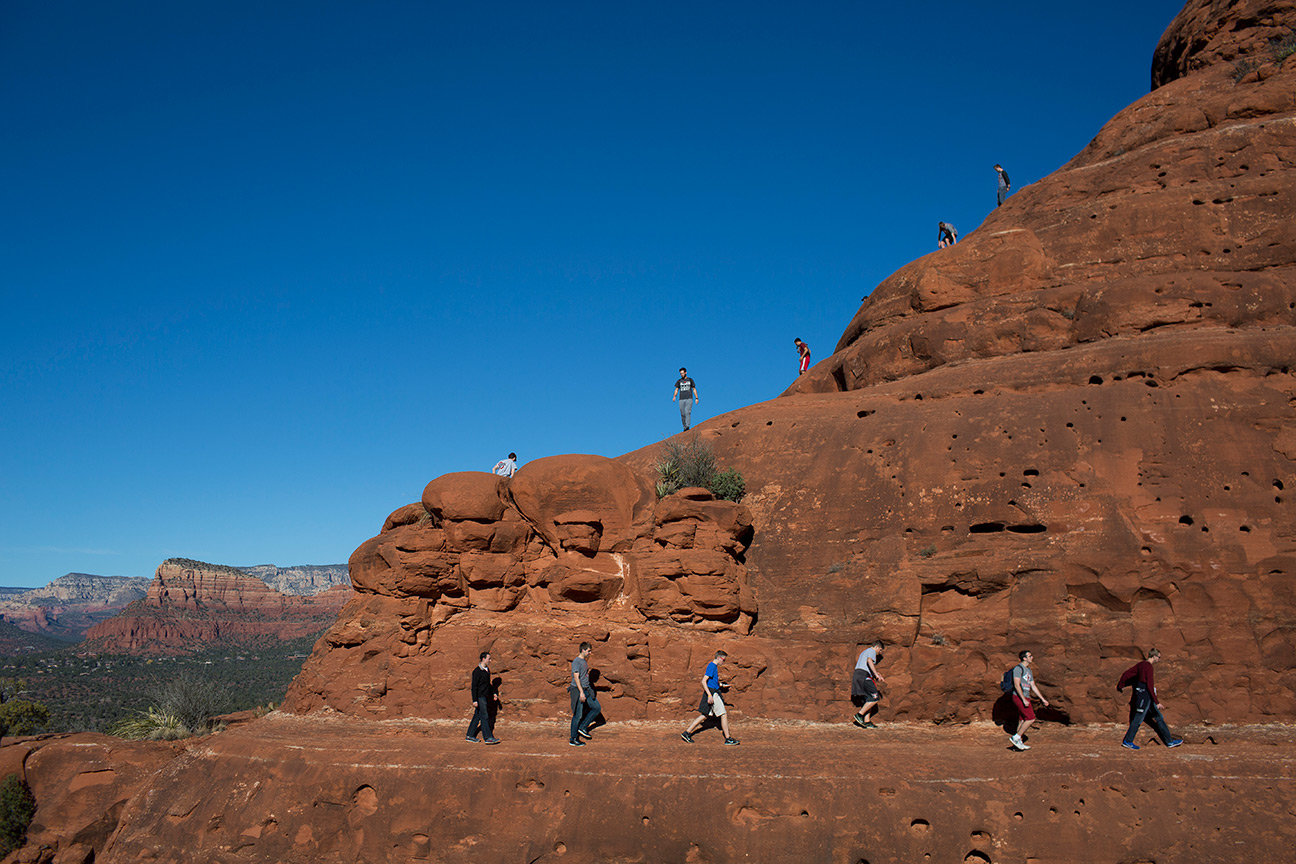 After departing Columbus in the middle of the night, Ohio State University Marching Band members arrived in Phoenix at around 8 a.m. local time. Band members then drove a few hours north to visit Sedona, Arizona, on Dec. 29 before their performance at the Fiesta Bowl. In Sedona, members hiked on the Bell Rock trail. 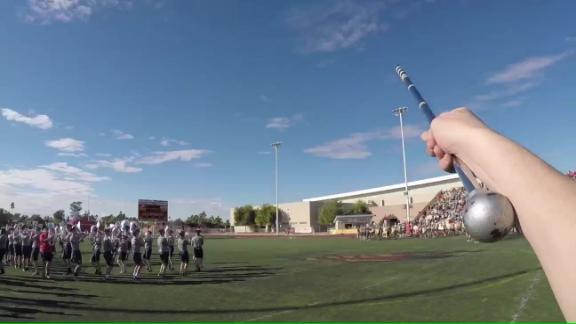 Take a look at an Ohio State marching band drum major's trip to Arizona from the first-person perspective. 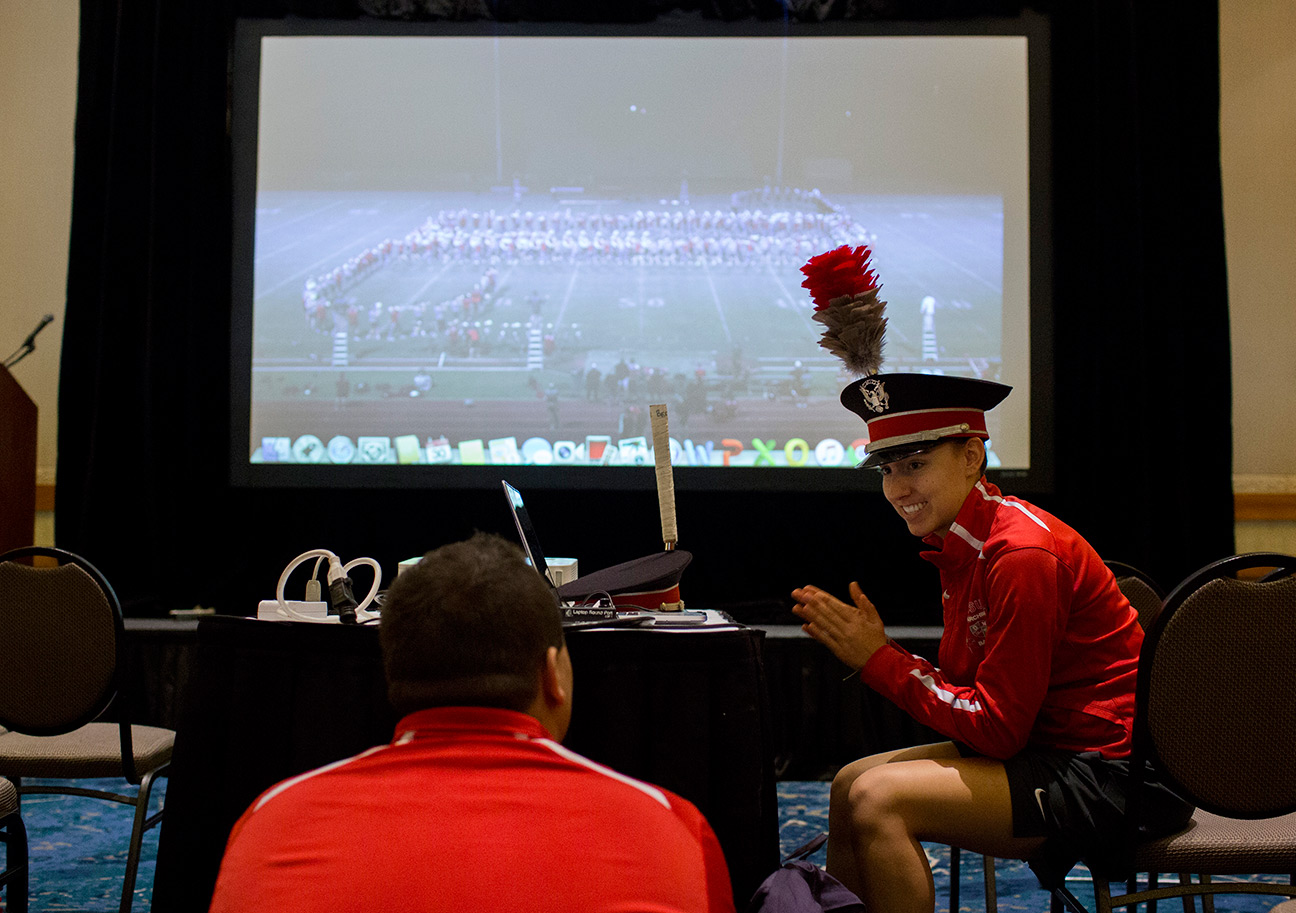 Audio/Visual team Kaitlin Price and Brett Olson replay tape of the band's rehearsal from the night before, Dec. 30, at the Embassy Suits in Scottsdale, Arizona. The band reviewed the recording to check for areas of improvement. The halftime show, "Buckeyes on Broadway," includes picture formations of a flying monkey from "Wicked", Rafiki's drawing of Simba from "The Lion King" and a star from "Hamilton," along with traditional drill, which includes moving pinwheel sets and moving lines. 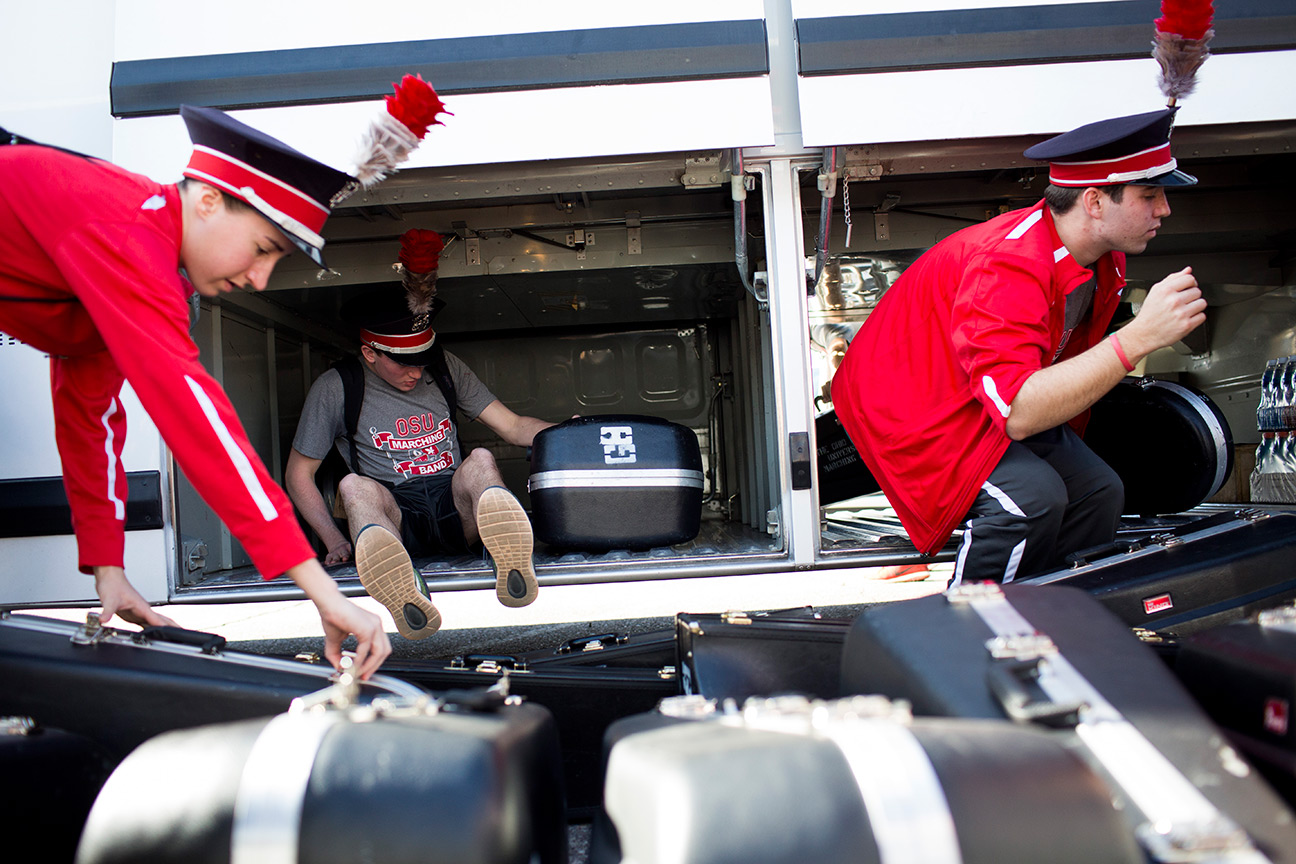 Ellen Johnston, Josh Fetter and Jason Nippert unpack their instruments from under their bus and head to a public rehearsal at Chaparral High School on Dec. 30 in Scottsdale. 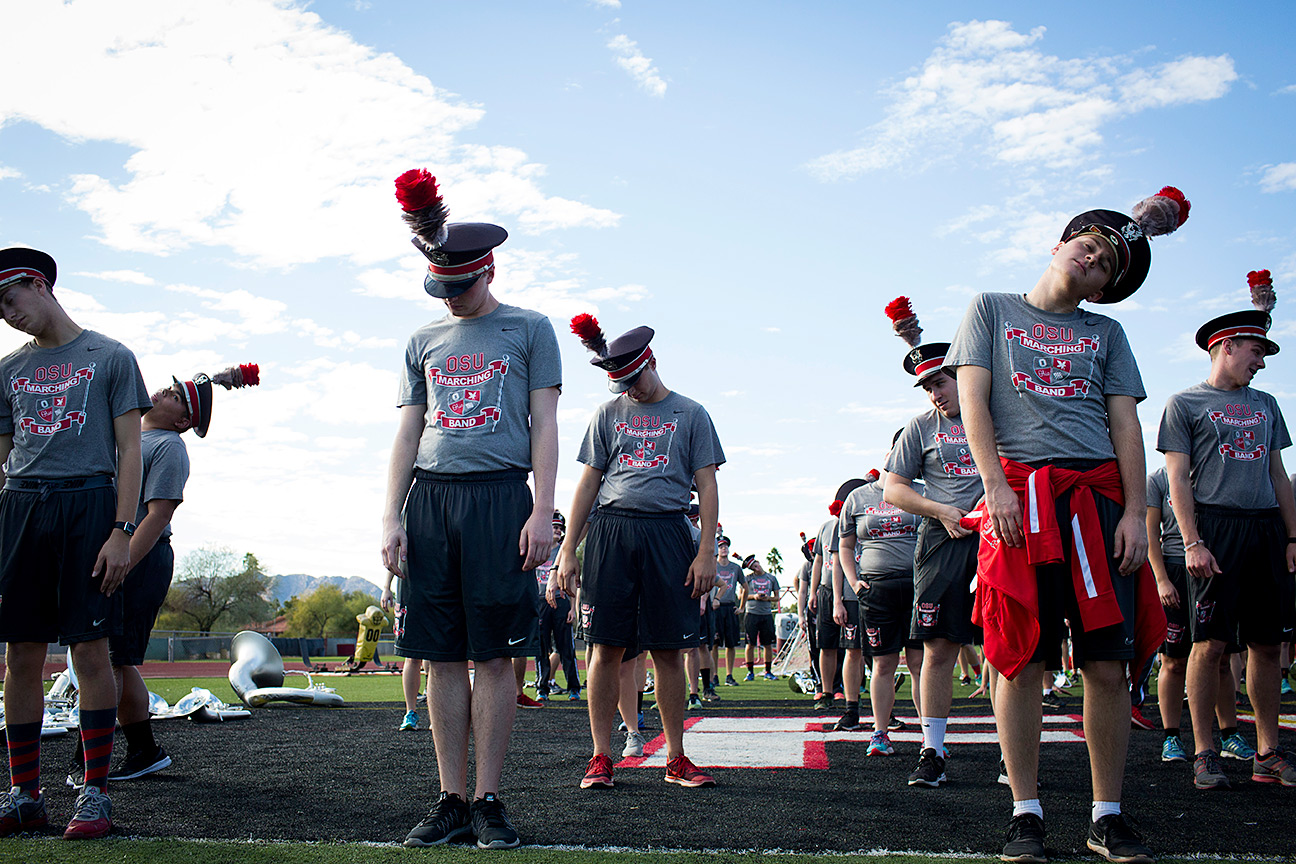 Think football players are the only ones that need to warm up? Wrong. The Ohio State University Marching Band began their rehearsal with stretches and plyometric exercises on Dec. 30 at Chaparral High School. 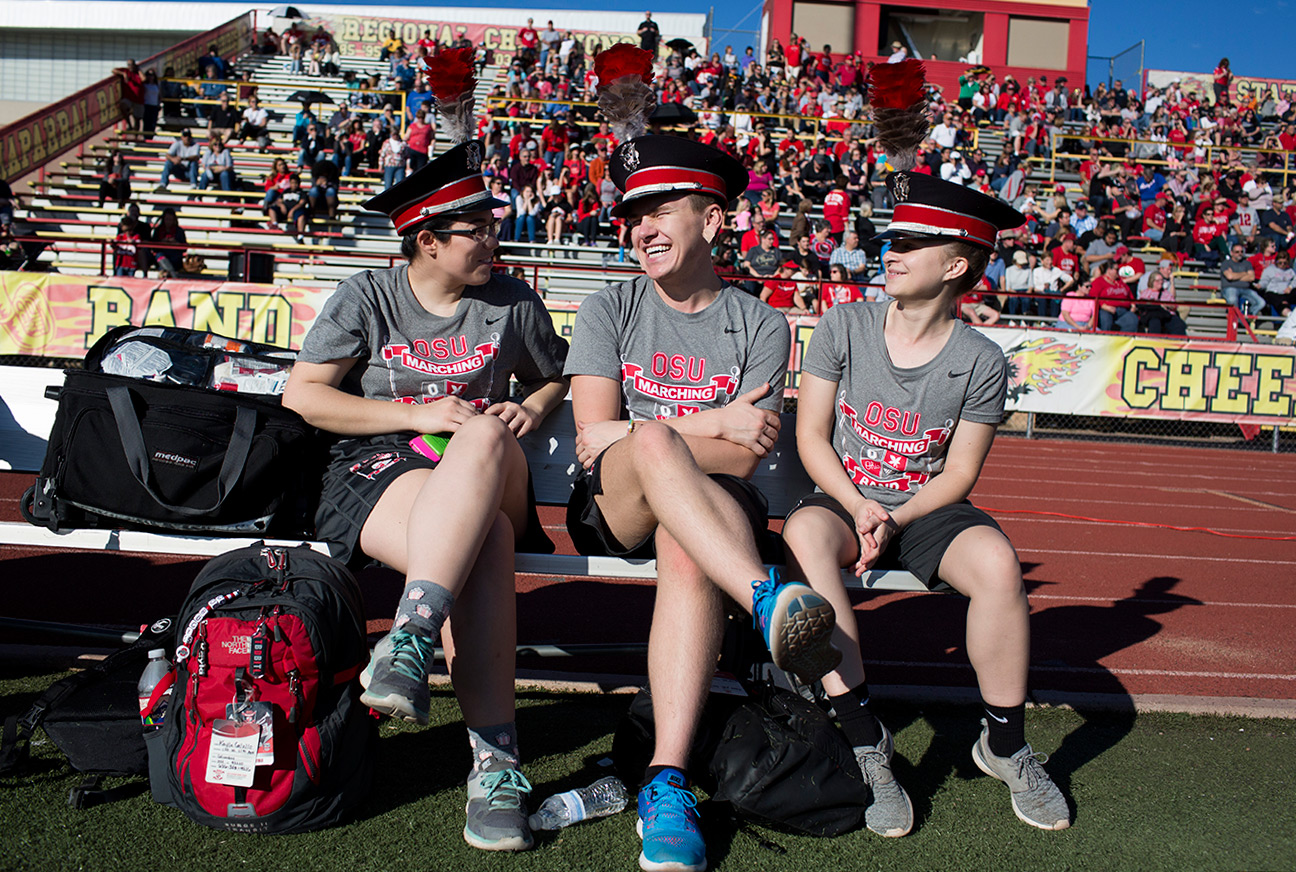 Student staff members Kayla Calvillo, Lucas Bushrow and Rachel Helbing watch the band's rehearsal on Dec. 30 at Chaparral High School. Student staff members are integral to the band's success -- they load and unload truckloads of equipment, make sure the band has plenty of water, distribute sunscreen and more as they work to problem-solve for their teammates. 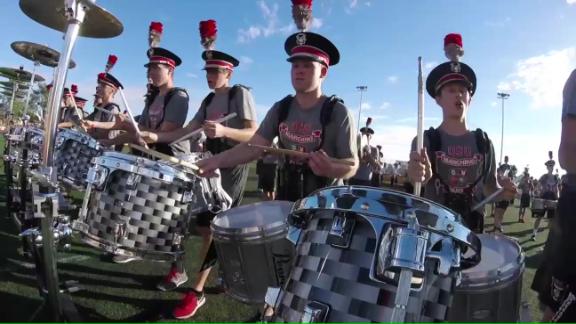 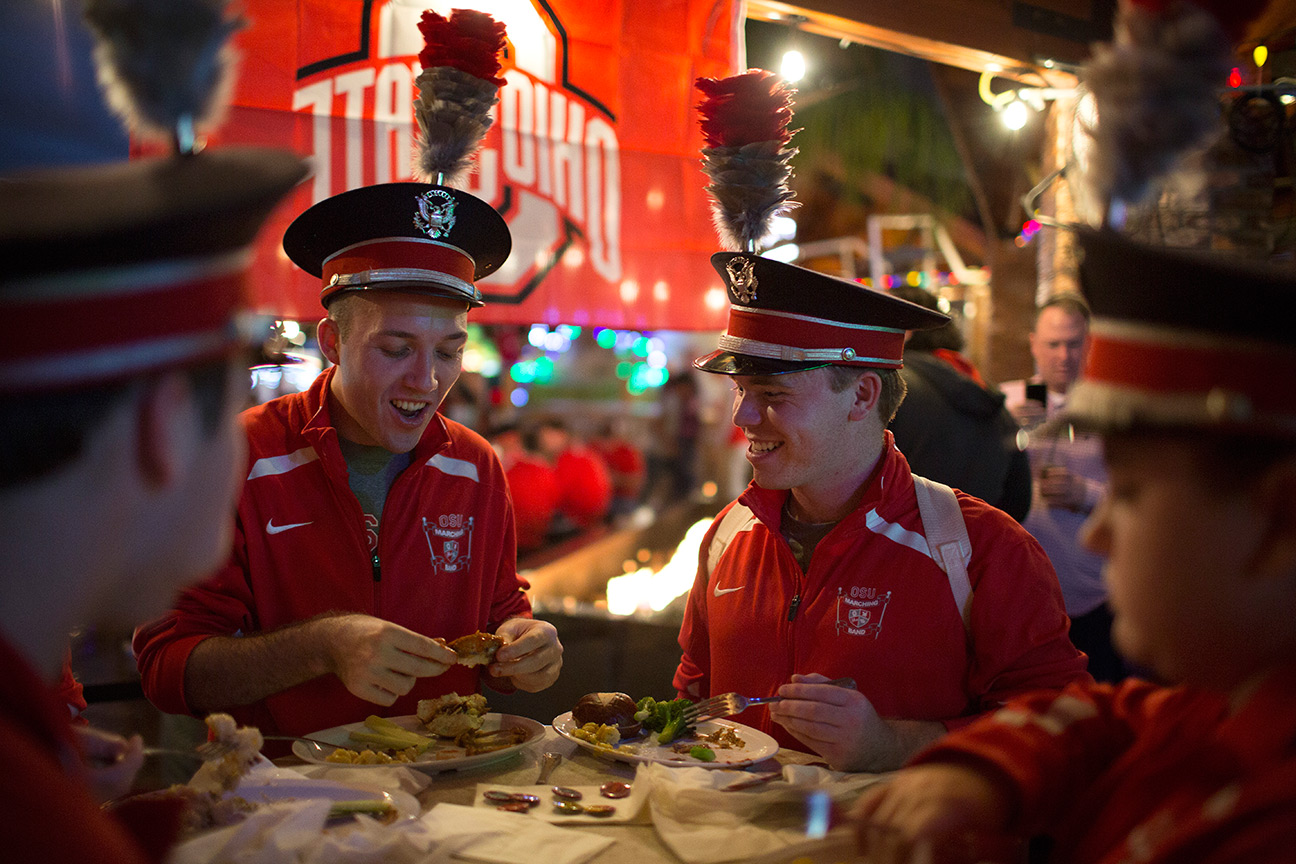 Brendan Todahl and Austin Brandenstein eat a well-deserved dinner after a pep band of The Ohio State University Marching Band performs for Buckeyes fans at Boondocks Patio & Grill on Dec. 30 in Scottsdale. 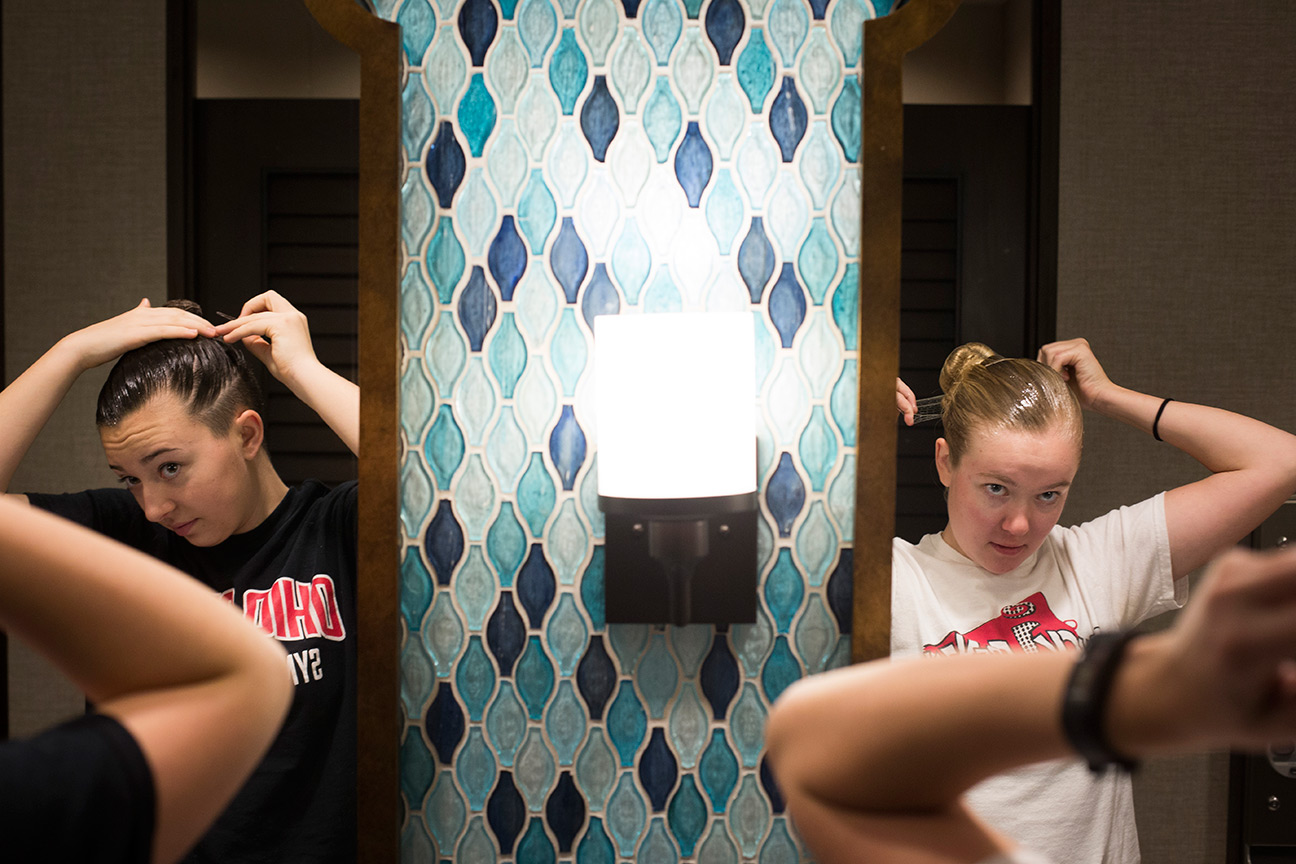 B-row Trumpet players Katie Brink and Rachel Chapman do their band hair in their hotel around 6:50 a.m. on game day, Dec. 31, in Scottsdale. "It used to take me around 25 minutes, but I've gotten it down to 10 with practice," Brink said. "We do it for every game day and performance, plus every Friday for 'Gray Day,' where we wear our practice uniform and hats at rehearsal." Band members went through this routine about 30 times in 2016. 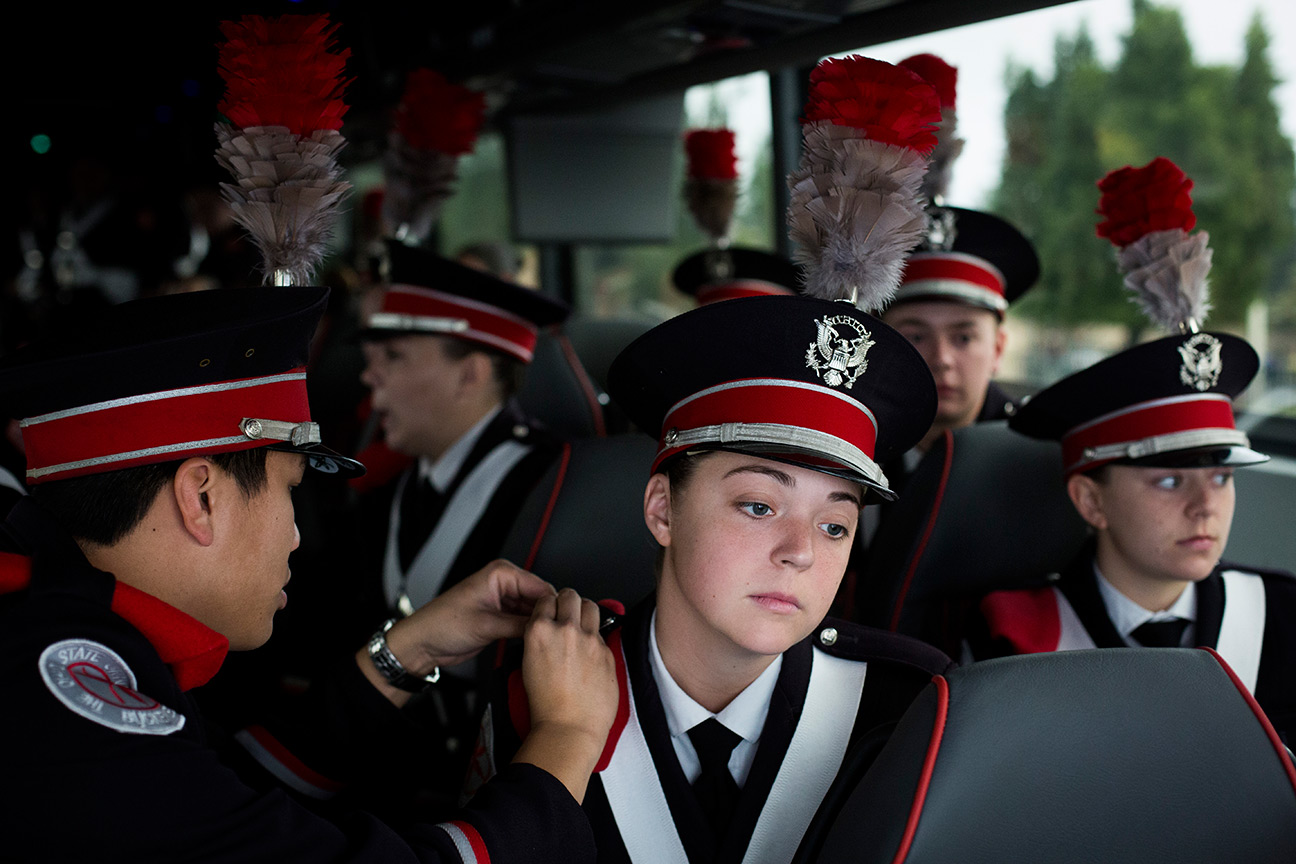 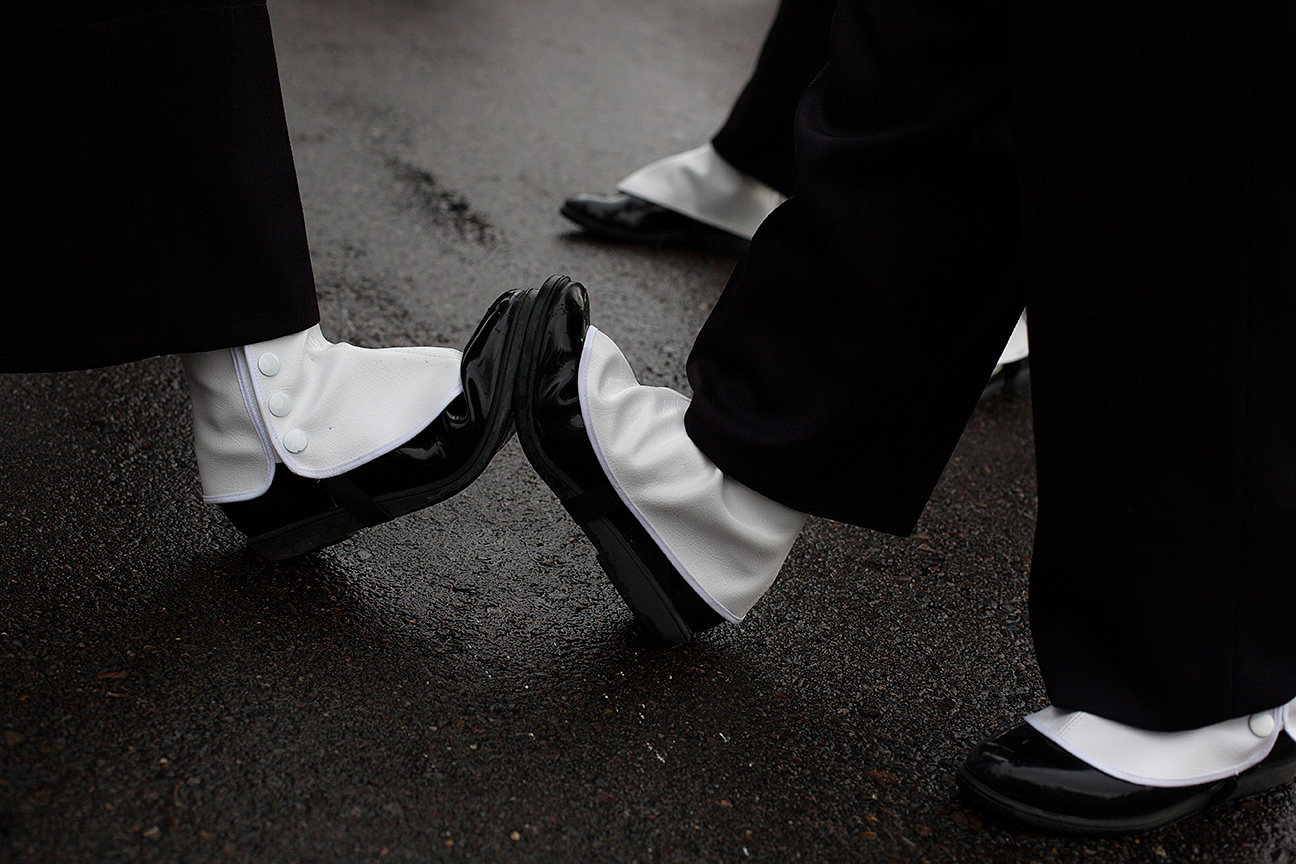 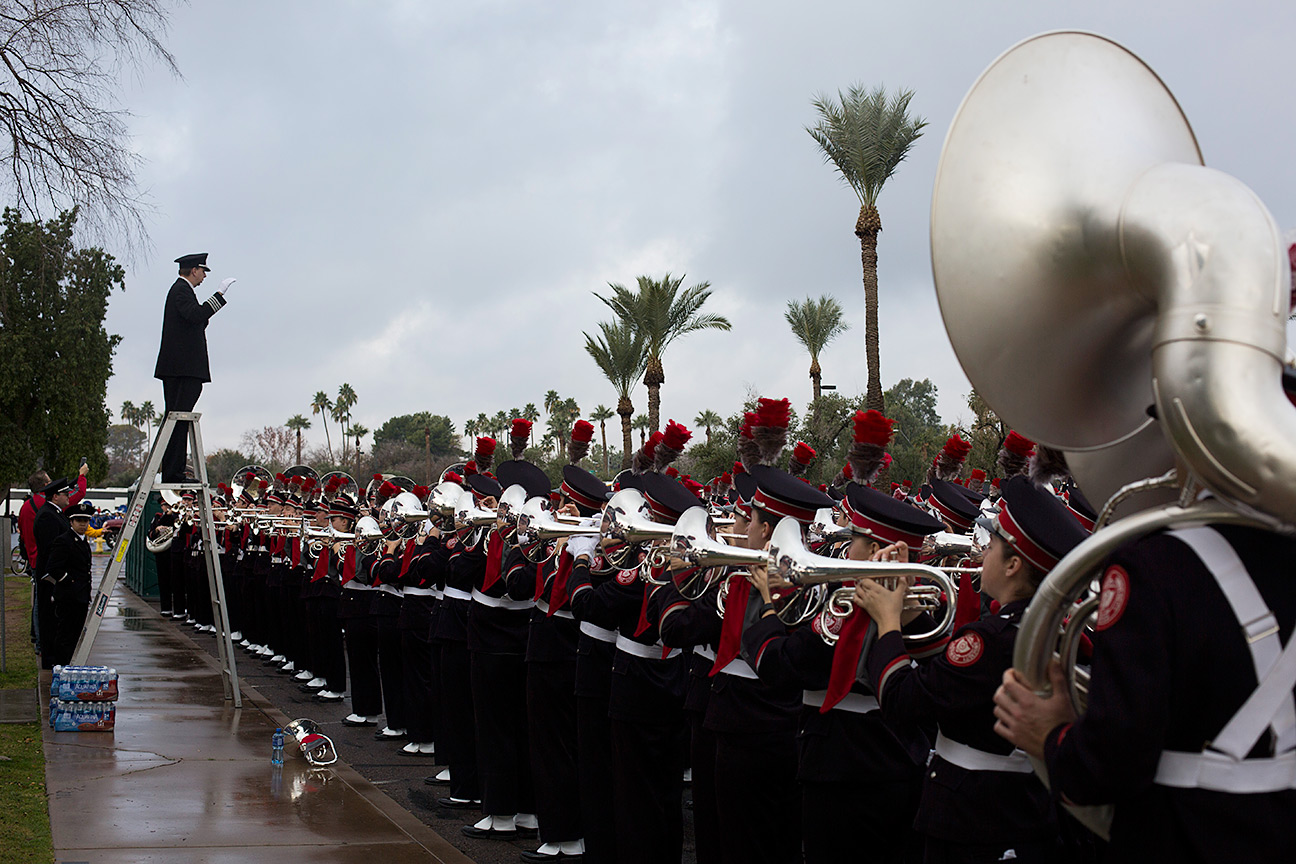 Dr. Christopher Hoch leads The Ohio State University Marching Band in a warmup before the group marches at the Fiesta Bowl Parade. 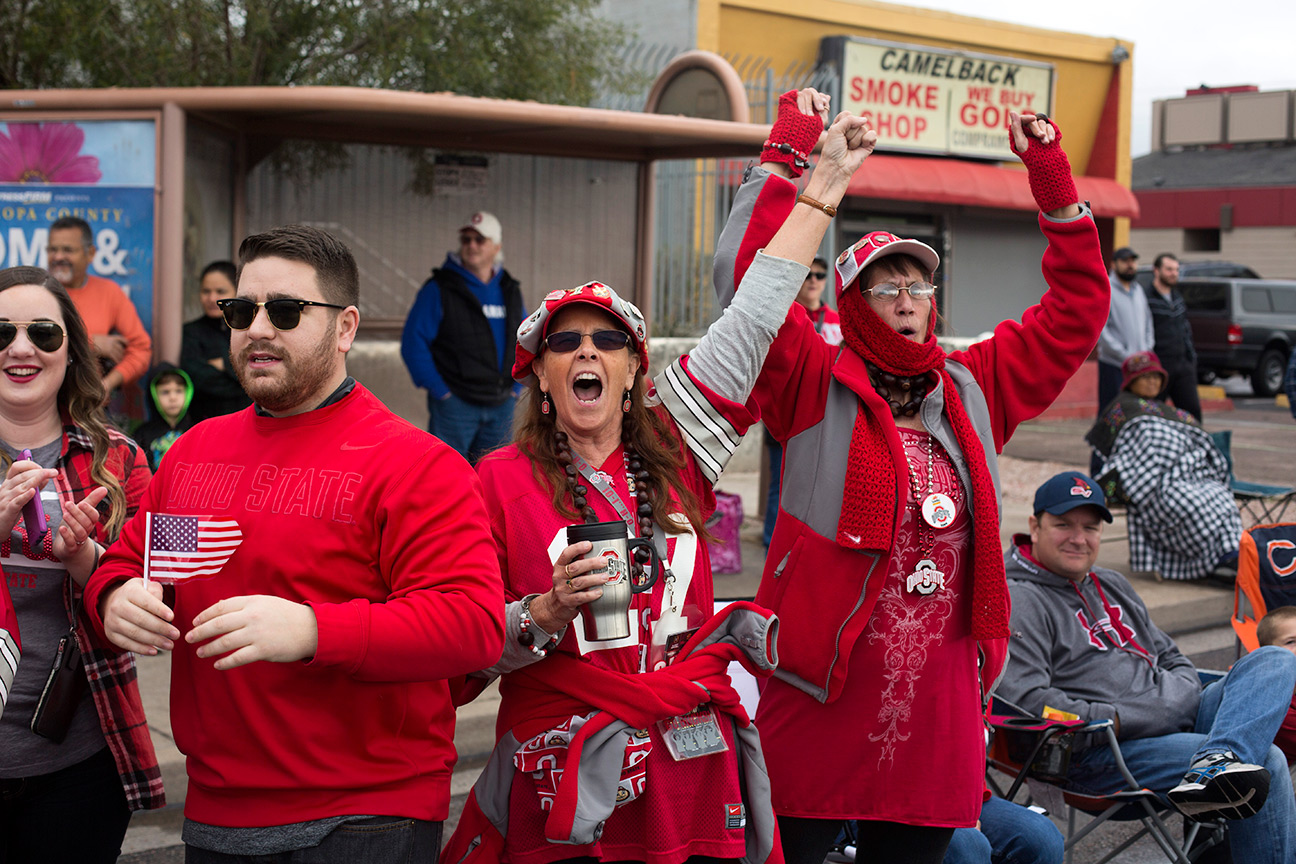 Sure, Buckeyes fans love their football team. But The Best Damn Band in the Land also gets them riled up, as seen with these jubilant bystanders at the Fiesta Bowl Parade. 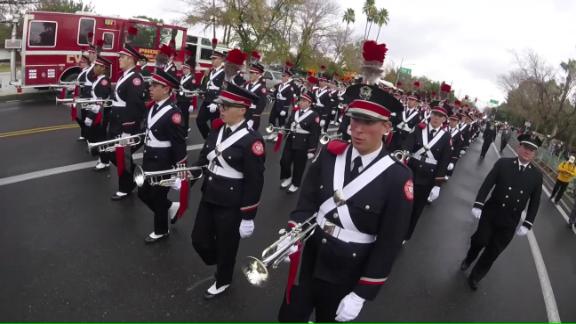 Ohio State's band marches through the streets of Arizona prior to the Fiesta Bowl. 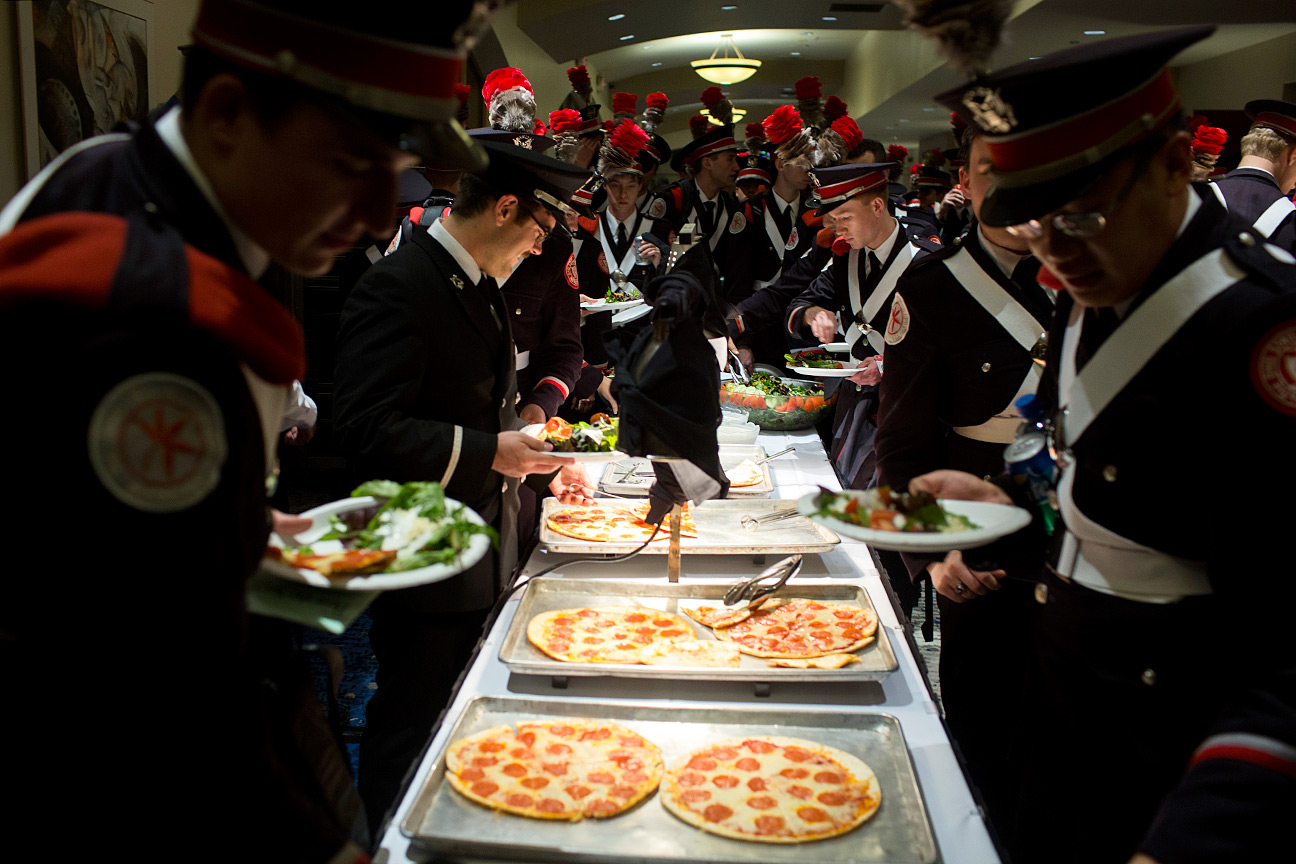 The Ohio State University Marching Band gets pizza at the Embassy Suites in Scottsdale at around 10:20 p.m. after a long day of Fiesta Bowl activities. Many members started their days around 6 a.m. 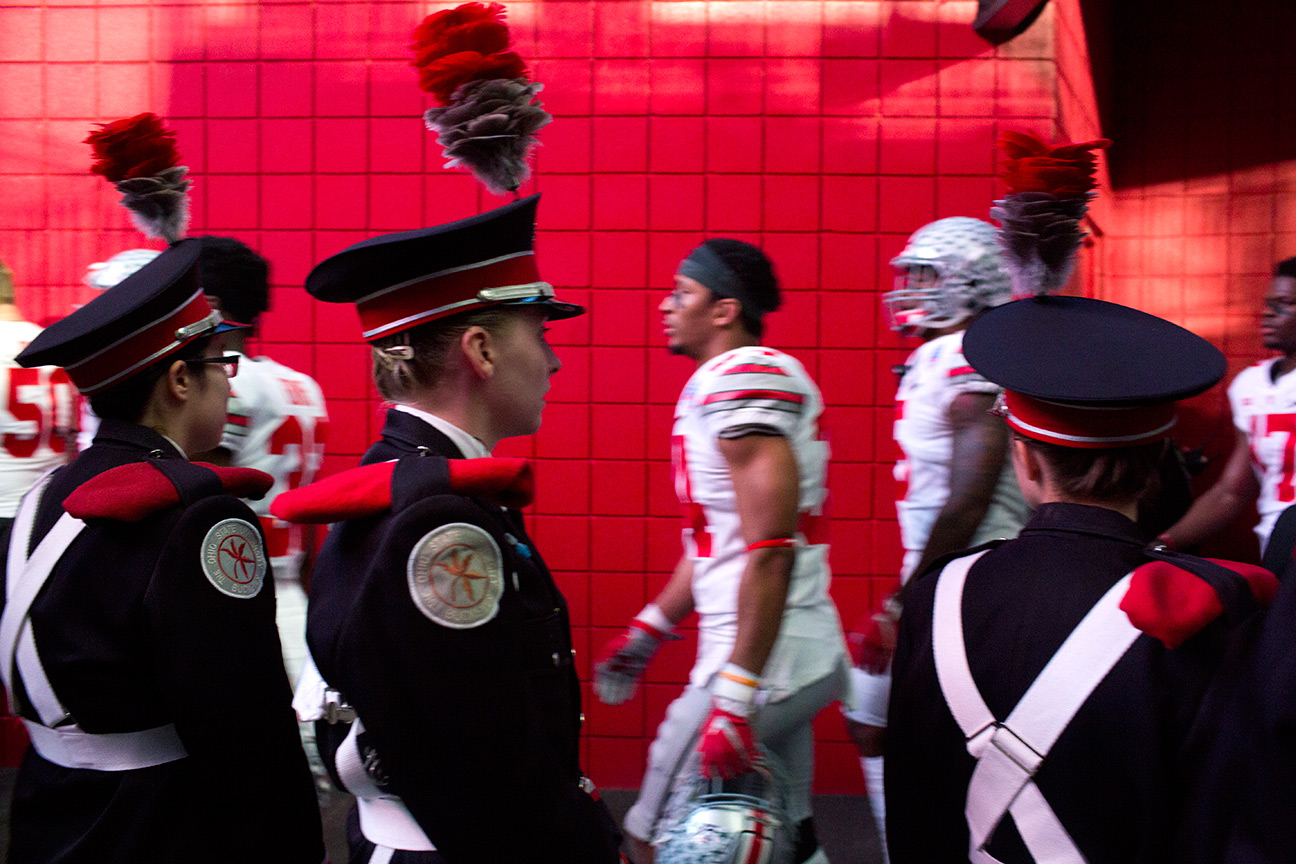 OSU football players walk past the band in the tunnel minutes before The Ohio State Marching Band performed "Buckeyes on Broadway" during halftime at the Fiesta Bowl on Dec. 31 in Phoenix. 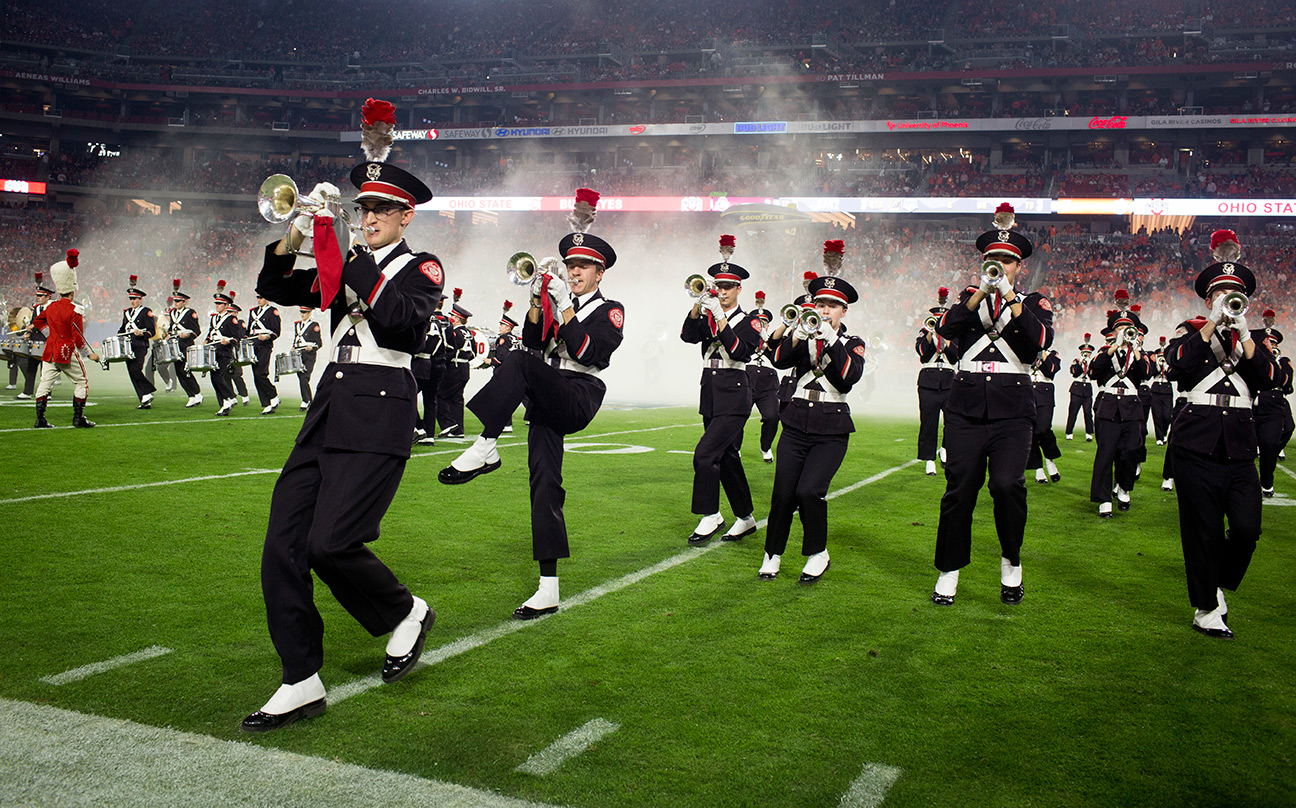 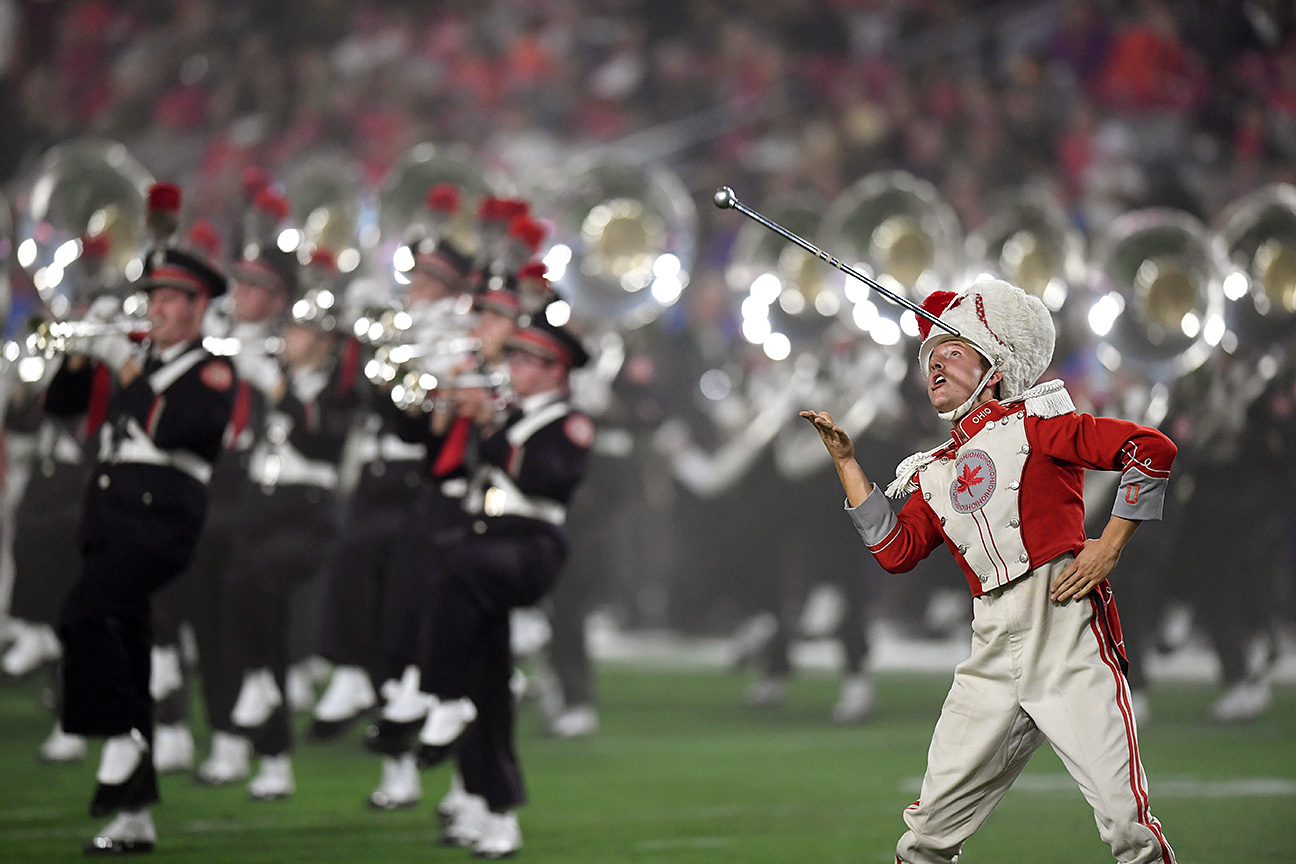 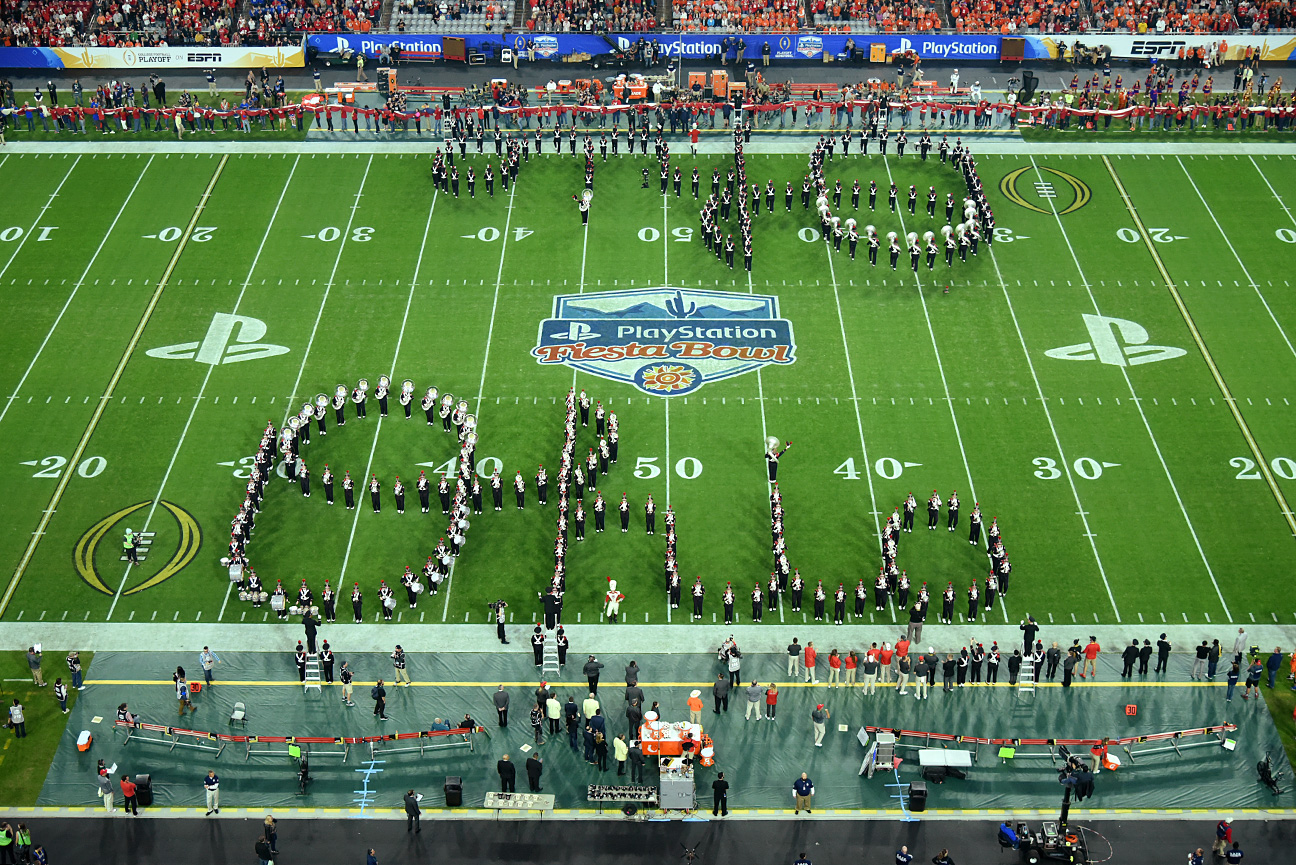 It's one of the most iconic moments in all of sports: Dotting the "i" during an Ohio State University Marching Band halftime shows. It's even more iconic when it's on the grand stage of the Fiesta Bowl. 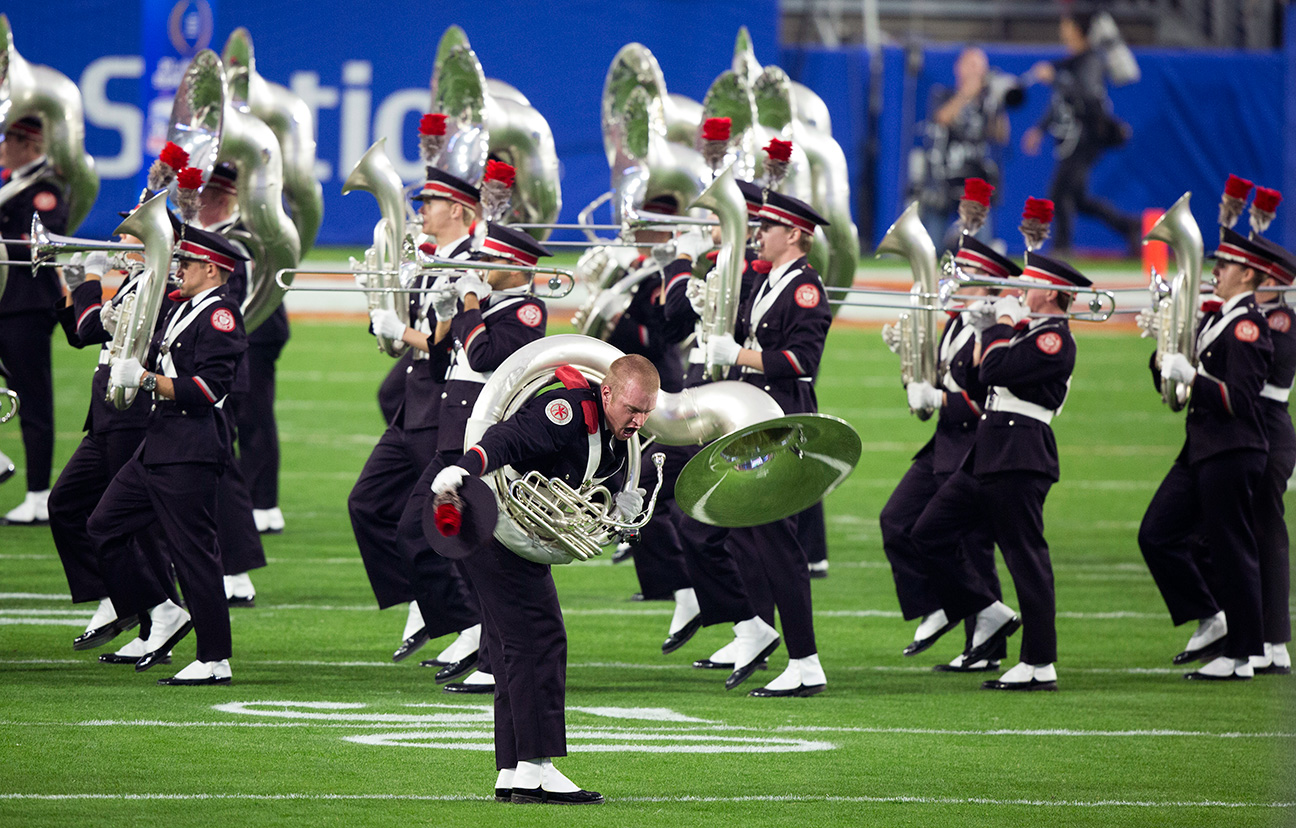 Fifth-year sousaphone player John Kilbane dotted the West-facing "i" during a double-script Ohio pregame at the Fiesta Bowl on Dec. 31 in Phoenix. Only fourth- and fifth-year sousaphone players have the honor of dotting the letter, based on a rank they gain from how many times they've marched a pregame for the given week during the regular season. During the postseason, all of the fourth- and fifth-years players perform the strut and bow, and the sousaphone row votes on who is the best. Kilbane and Casey Flowers were selected for the Fiesta Bowl.