After 266 games, 34,008 offensive snaps and 1,361 touchdowns, just two teams remain. Will Brady and Belichick add a fifth Super Bowl title to their legacy? Or will Matt Ryan's jet-powered offense finally earn a title for Atlanta? Here's your head-to-head breakdown of how the Patriots and the Falcons will stack up come Feb. 5.

By Ben Arledge   |   ESPN THE MAGAZINE

The best of the best

Get ready for a shootout in Texas, folks. According to ESPN's efficiency metric*, we get the chance to watch the NFL's two best offenses face off in Houston. The Falcons paced the league with 58 offensive TDs this season, while the Patriots finished third with 51. But against a stingy Pats D (which allowed a league-low 250 points all season), the Falcons will need to keep firing on all cylinders if they're going to score enough to make up for their porous defense. In the regular season, the Falcons were shredded for 371.2 yards (eighth most in the NFL) and 25 points per game. They also gave up 30 -- barely more than the Pats averaged -- six times.
Falcons efficiency rank
Patriots efficiency rank
HOVER FOR CATEGORY TOTALS

How they got here

The Patriots and Falcons combined for just one loss after Week 10 while finishing first (plus-11.9) and second (8.38), respectively, in the NFL in scoring margin for the season (New England won seven of its regular season games by at least two TDs). It was more of the same in the postseason for both squads -- Atlanta outscored its opponents by a combined 39 points, and New England by 37.
Falcons scoring differential
Patriots scoring differential

Brady set the league on fire, throwing for 3,554 yards and 28 TDs in only 12 regular season games, and excelled with the long ball (league-best 58.8 percent completion rate on throws of 11-plus yards). But the Falcons won't make it easy to go deep: Atlanta allowed the seventh-lowest QBR on such throws (72.5).
Tom Brady's QBR rank among starting QBs
Falcons defense opponent QBR rank among 32 teams
HOVER FOR TOTALS

Tom Brady isn't exactly mobile, but his average of 2.39 seconds from snap to throw keeps him out of trouble under pressure. He shouldn't have to worry much against Atlanta, whose defense pressured QBs only 24.9 percent of the time (sixth-lowest in the league).

New England ranked a weak 25th in yards per carry, but don't let that fool you: The Pats are dangerous. LeGarrette Blount, who led the league in rushing TDs (18), and a finally healthy Dion Lewis could run rampant against the Falcons, who allowed the seventh-highest yards per carry in the NFL (4.52).

Even with starts from Jimmy Garoppolo and Jacoby Brissett, the Pats threw just two INTs all season, fewest in the NFL.

Completing 69.9 percent of his passes in the regular season, a revitalized Matty Ice turned in a MVP-caliber season (and hasn't thrown an interception since Week 13!). New England's pass defense needs to focus on stopping the long ball -- Ryan had 69 passes for gains of at least 20 yards, the NFL's second highest mark.
Matt Ryan's QBR rank among starting QBs
Patriots defense opponent QBR rank among 32 teams
HOVER FOR TOTALS

Under pressure, Matt Ryan led the league in yards per attempt (7.5) and was sixth in completion rate (50.4 percent). That spells trouble for New England's pass rush. The Pats made QB contact on just 50 plays when pressuring (sixth fewest in the NFL).

Atlanta's lethal running back duo of Devonta Freeman and Tevin Coleman rushed for 19 TDs. But even this pair might be stifled by the Pats' run D, which allowed only three runs of 20-plus yards and just six rushing TDs on almost 400 attempts -- both lowest in the league.

Bad news, Birds: Ryan's 54.3 fourth-quarter QBR ranked 19th in the NFL; when trailing, his QBR in the final two minutes was a dismal 2.2.

Totaling just four lost fumbles and a very un-Matt Ryan-like 7 INTs, the Falcons were one of just five teams in the NFL with a TO margin of at least plus-10.

What to watch for 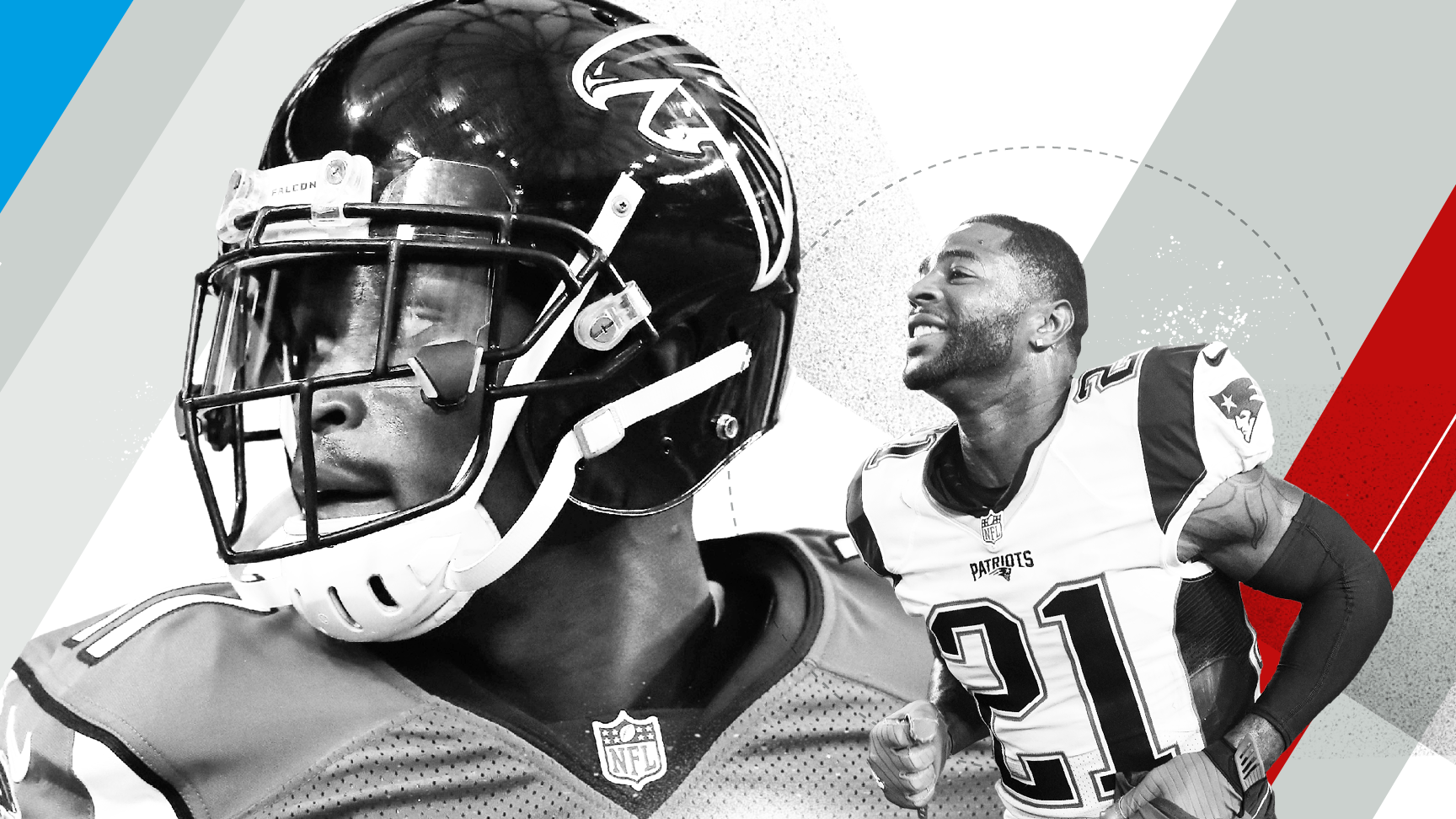 Key matchup: WR Julio Jones vs. CB Malcolm Butler Toe injury? What toe injury? Jones tallied 180 yards on Sunday against the Packers, after averaging an NFL-high 100.6 yards per game this season despite foot issues that kept him out of two games in December. Now he's set for a showdown with Butler, Pro Football Focus' fourth-best corner in coverage this season (four INTs). While the Pats are known to shift Butler to the No. 2 receiver and double the No. 1, expect to see this amazing matchup at some point in Houston.


Stephen Gostkowski, shockingly, might not be the more reliable kicker here. He missed three PATs in the regular season; Matt Bryant missed one and was 15-of-17 on kicks of 40 yards or longer.

Atlanta averaged 11.38 yards per punt return, fifth highest in the NFL. Eric Weems returned all 24 punts for the Falcons.

Down the stretch, Julian Edelman was targeted on 33.5 percent of his routes -- the NFL's second-highest frequency, and a sharp increase from his rate in Weeks 1-8 (22.8 percent).

After a Week 11 bye, the Falcons converted an NFL-high 47 percent of their third downs -- that's almost 8 percentage points higher than before their bye week.

New England was the NFL's second-most disciplined team on defense. On offense? Not so much. The Pats led the NFL with 29 offensive holding calls. Atlanta's offense and defense both ranked in the top 10 in discipline. The Birds' special teams, though, drew 23 flags, seventh most in the NFL.

Both Atlanta and New England roll into Houston hot. Matt Ryan -- 730 passing yards, seven TDs, and zero INTs in two games -- and his Falcons have dominated the NFC. The Pats are coming off a 36-17 win against Pittsburgh in which a 39-year-old Tom Brady had a 384-yard day. According to ESPN's Football Power Index, which takes into account each team's strengths, as well as several other factors, you can expect one for the ages, with the Patriots outlasting the Falcons to win the Lombardi Trophy.

Projected margin of victory for the Patriots over the Falcons.

Projected chance of victory for the Patriots over the Falcons.

Photo illustration by Richard Roberts. Photograph of Brady by James Michelfelder and photograph of Ryan by Matt Hoyle. All data courtesy of ESPN Stats & Info. Stats through regular season; yards per carry stats are rounded.