he success of Aizawl FC in the I-League this season has become a symbol of what football means to the north-east of India and what the north-east means for Indian football.

Three in every ten professional Indian footballers in I-League Division 1 come from the north-east - that collection of eight states, which happen to be the most ethnically-distinct, culturally-alienated, economically-neglected and politically-troubled from the national mainstream, and also home to its latest league title winners.

Of the eight states, three sustain the stream of the region's football. Manipur, which sent in the first large batch of its players into pan-Indian football; Meghalaya, through a regional institution, Shillong Lajong FC, the first club to enter the highest competition in India; and most recently Mizoram, which in a short time has created a rich ecosystem that feeds into the mainstream. Football has remained rooted in northeastern communities, regardless of the lack of wealth or opportunities in the past. When made available to them, the communities have responded to them with enthusiasm. Aizawl FC marks the arrival of a new generation of clubs from the north-east seeking a place on the big stage

Amidst the fundamental contradictions that Indian football has most recently wreaked on itself - to start with the Indian Super League versus the I-League, and the lack of systematic pathways across many states, football in the north-east stands for passion, ambition and pure soul.

ESPN visits the region, where the future of Indian football lies and where even in the most difficult times, the sport will always come home to rest. 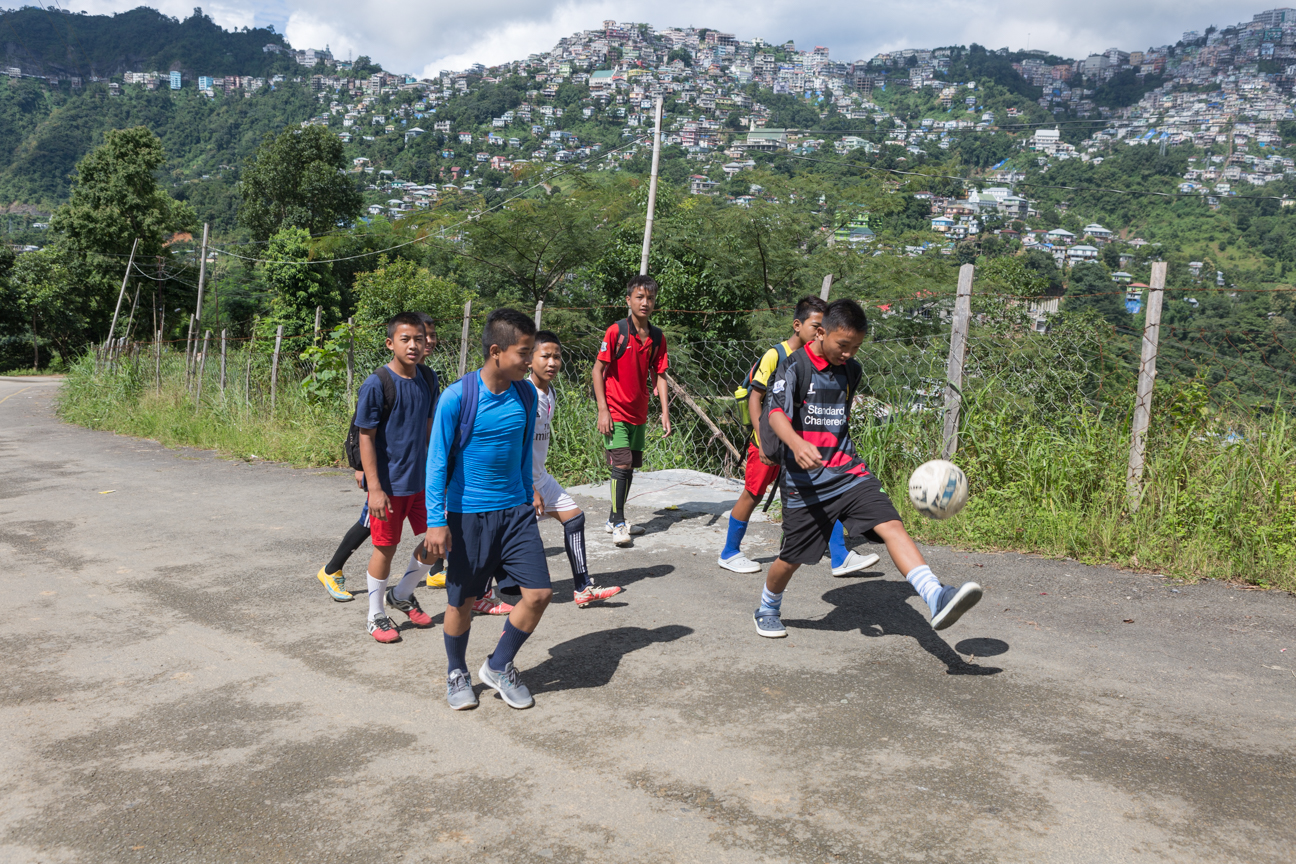 This is Mualpui in the Salem Veng locality, south-east of downtown Aizawl, Mizoram, where boys are heading towards the Rajiv Gandhi Stadium for a trial. In a state where natural turf pitches are hard to find and even harder to maintain, the stadium is one of four artificial turfs installed from 2011 onwards. Boys have showed up from as far away as Lunglei, 170km and a five-hour road journey away in this state marked by 21 hill ranges. When a call goes out for football, they come from everywhere. 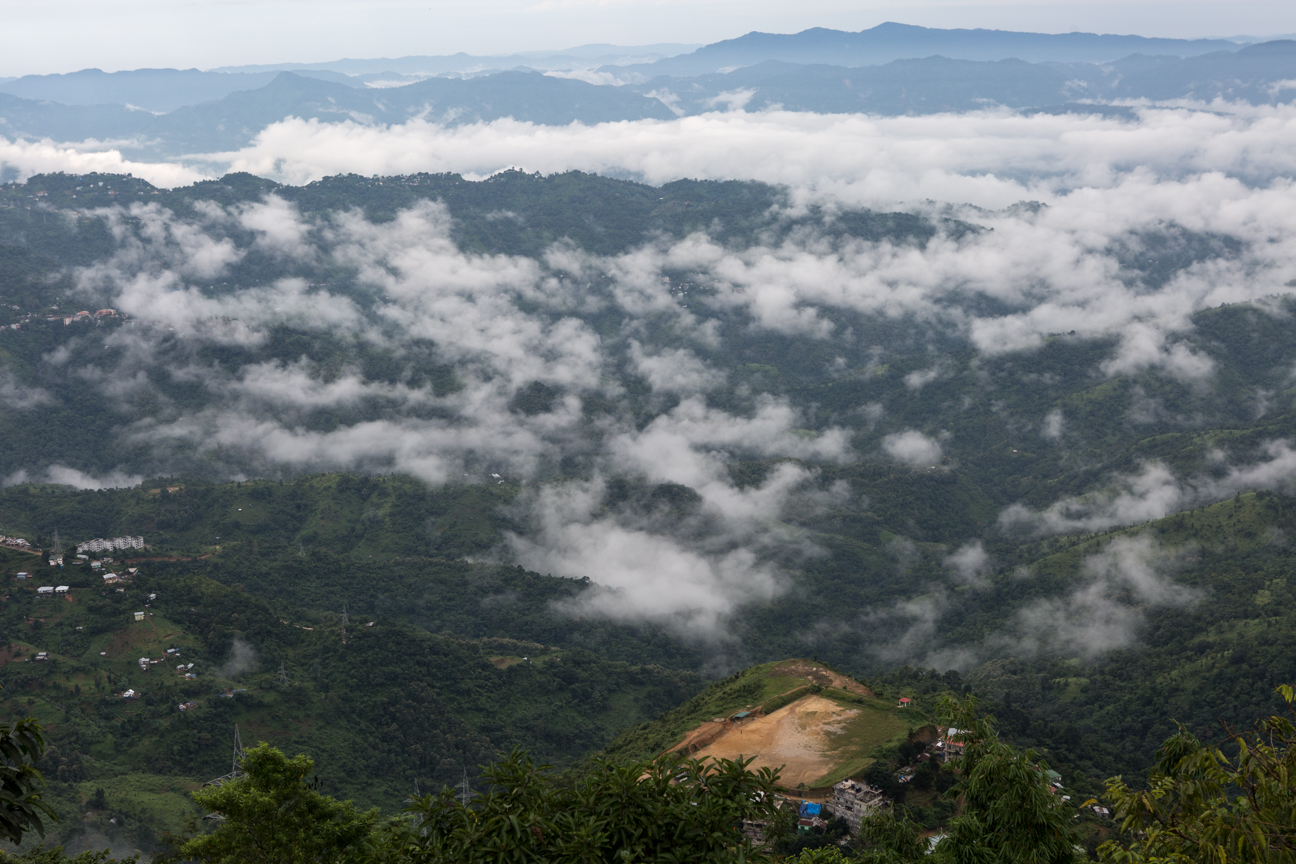 India's north-east extends from Uttarey in Sikkim to the village of Kaho in Arunachal Pradesh, which includes eight states and 4.5m people. It covers geographies from the mighty Kanchenjunga to the flatlands of Assam. The region is dotted with hill ranges where even if a scrabble of bare earth is found, a football pitch springs to life. 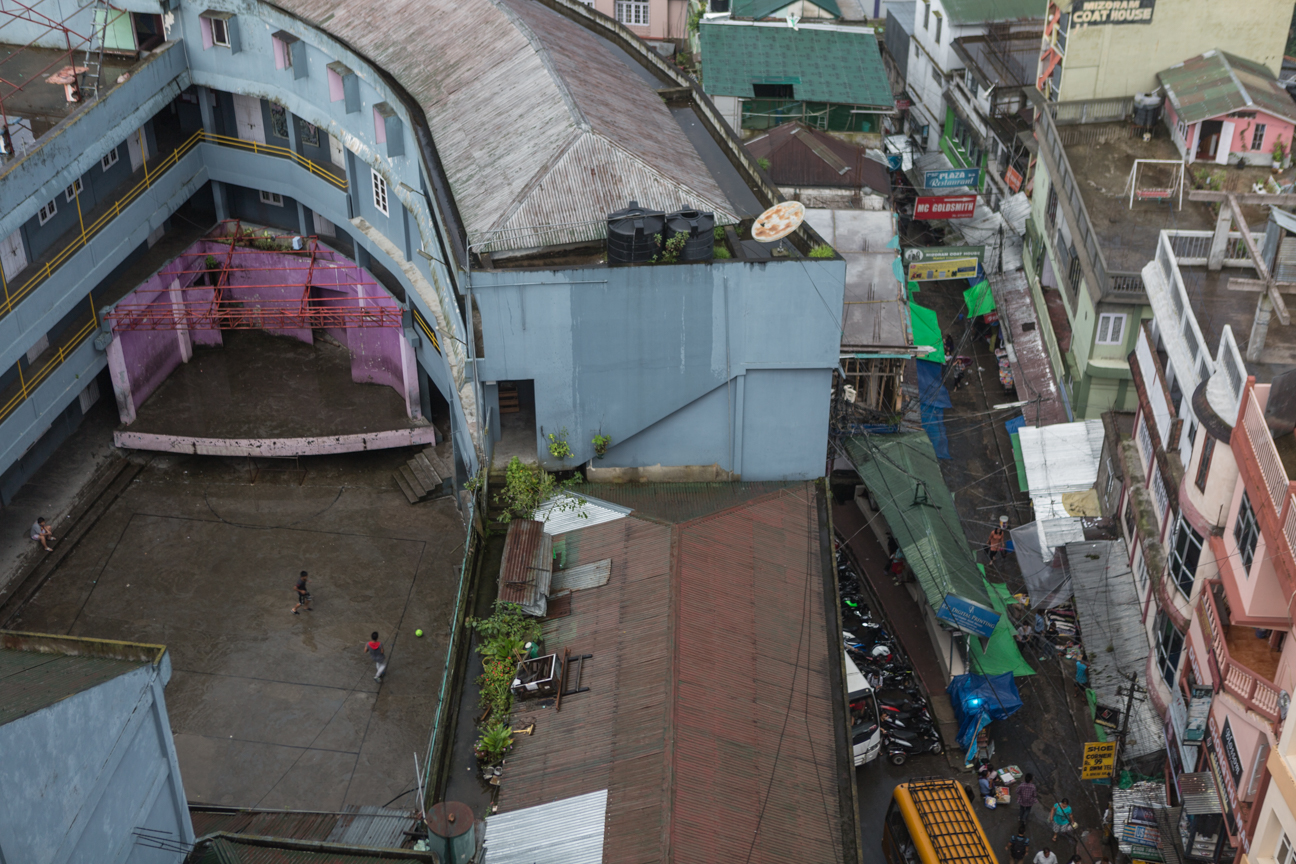 Football sprouts everywhere in the North East. Across the wide, green spaces of Assam, around the slopes in Meghalaya and street corners in Manipur. Here in the heart of Aizawl's Bara Bazaar, two Mizo schoolboys go mano-a-mano in the only central open space available at the Dawrpui Middle School on a damp morning. Around them are classrooms, on the other side of their school walls is the sound of traffic, a bustling market and vegetable sellers. The schoolboys' world however is focussed around their football. 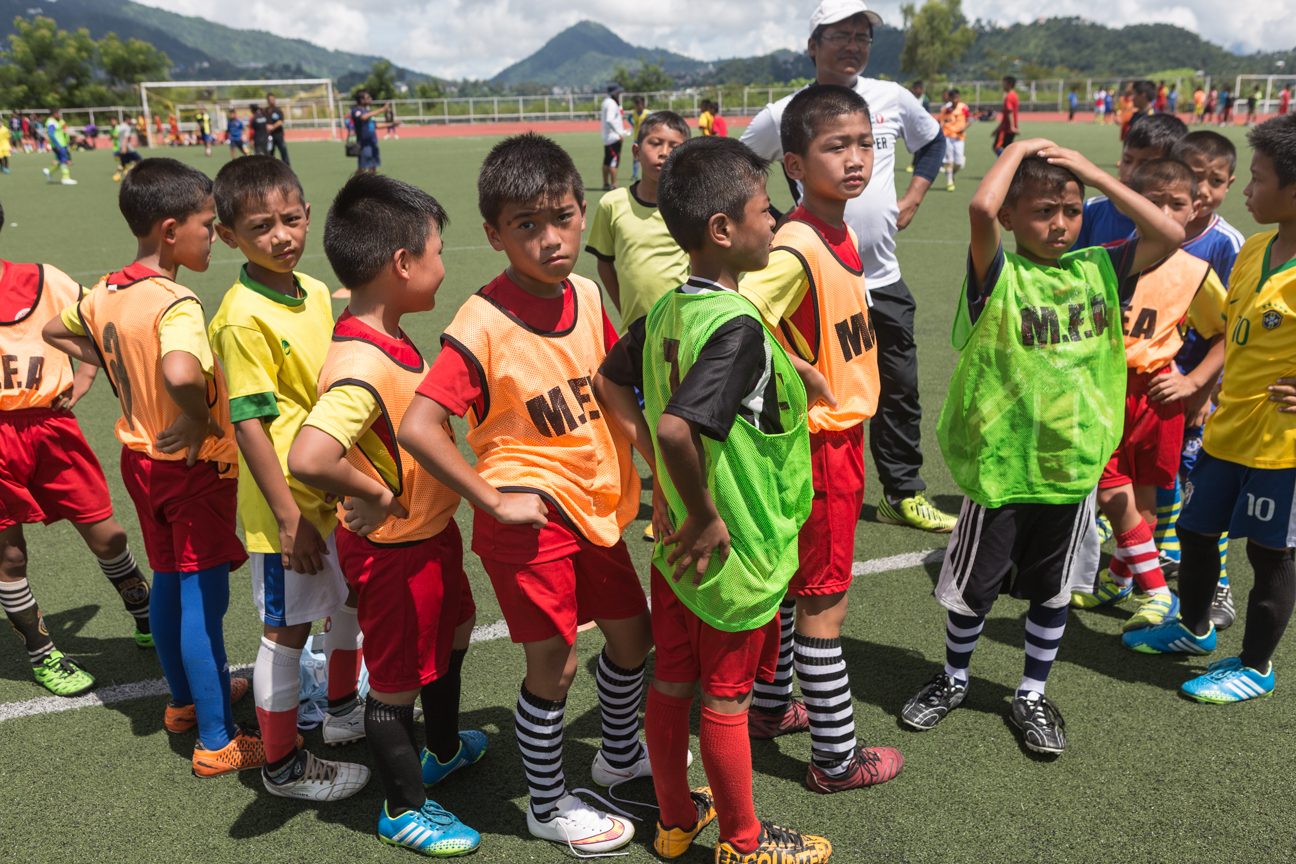 More than eight hundred boys turn up at the Rajiv Gandhi stadium in Mualpui when under-14 and under-12 trials are called for by Delhi club Sudeva FC. It was the eighth trial held in Aizawl in 2016, the response was so huge that the scouts had to divide the boys into three age groups - including an under-10s category. Sudeva ended their pan-India trials with Aizawl, but had never come across such a large number. 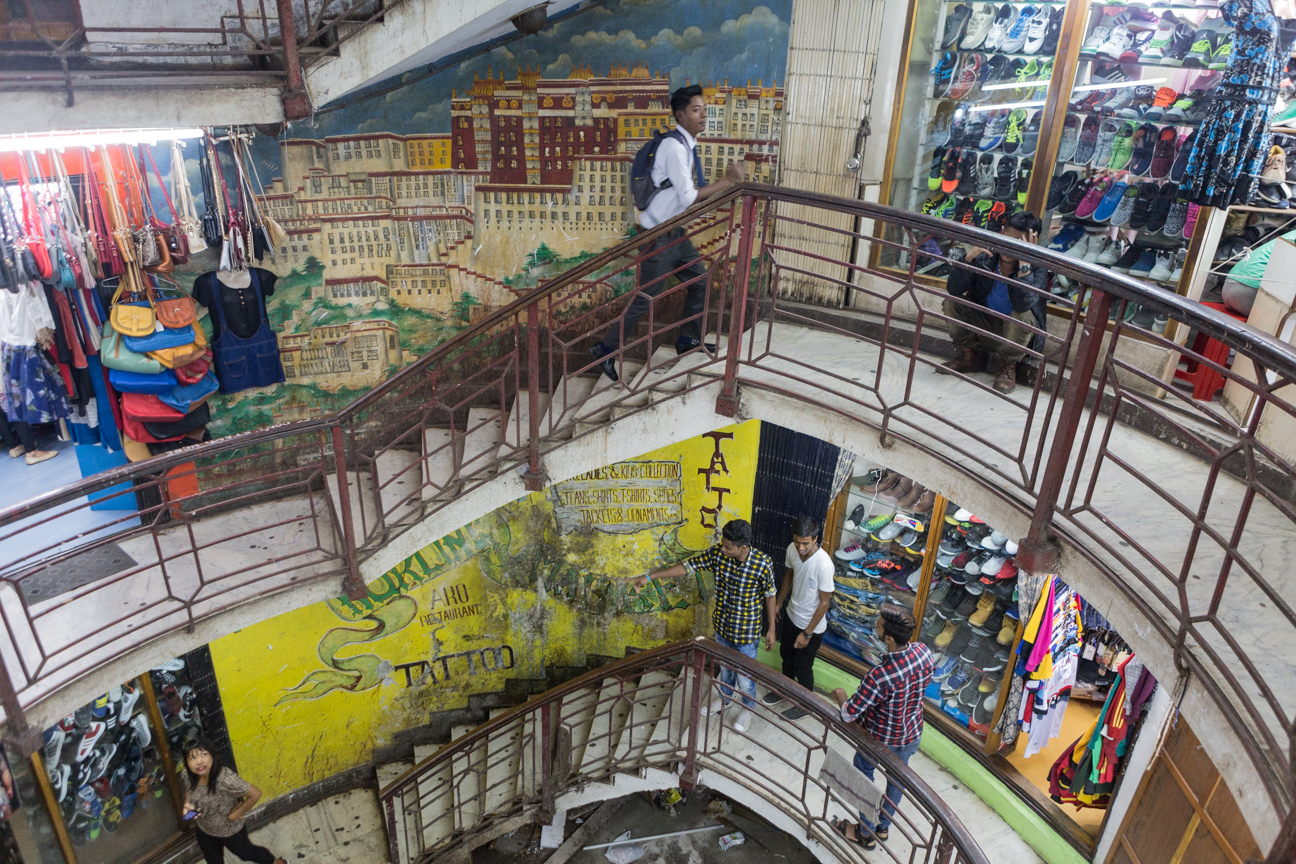 Shillong's celebrated Glory's Plaza meets the city's demand for fashion and football; with dozens of shops rented by Tibetan refugees who source their products from Nepal and Myanmar, Glory's is a shopping magnet. It offers the trendiest shoes, bags and clothes and the sought-after football "first copies." "First copies" are high-qualify replicas of shoes, jerseys and jackets, not dirt-cheap but costing far less than the real, overpriced deal. 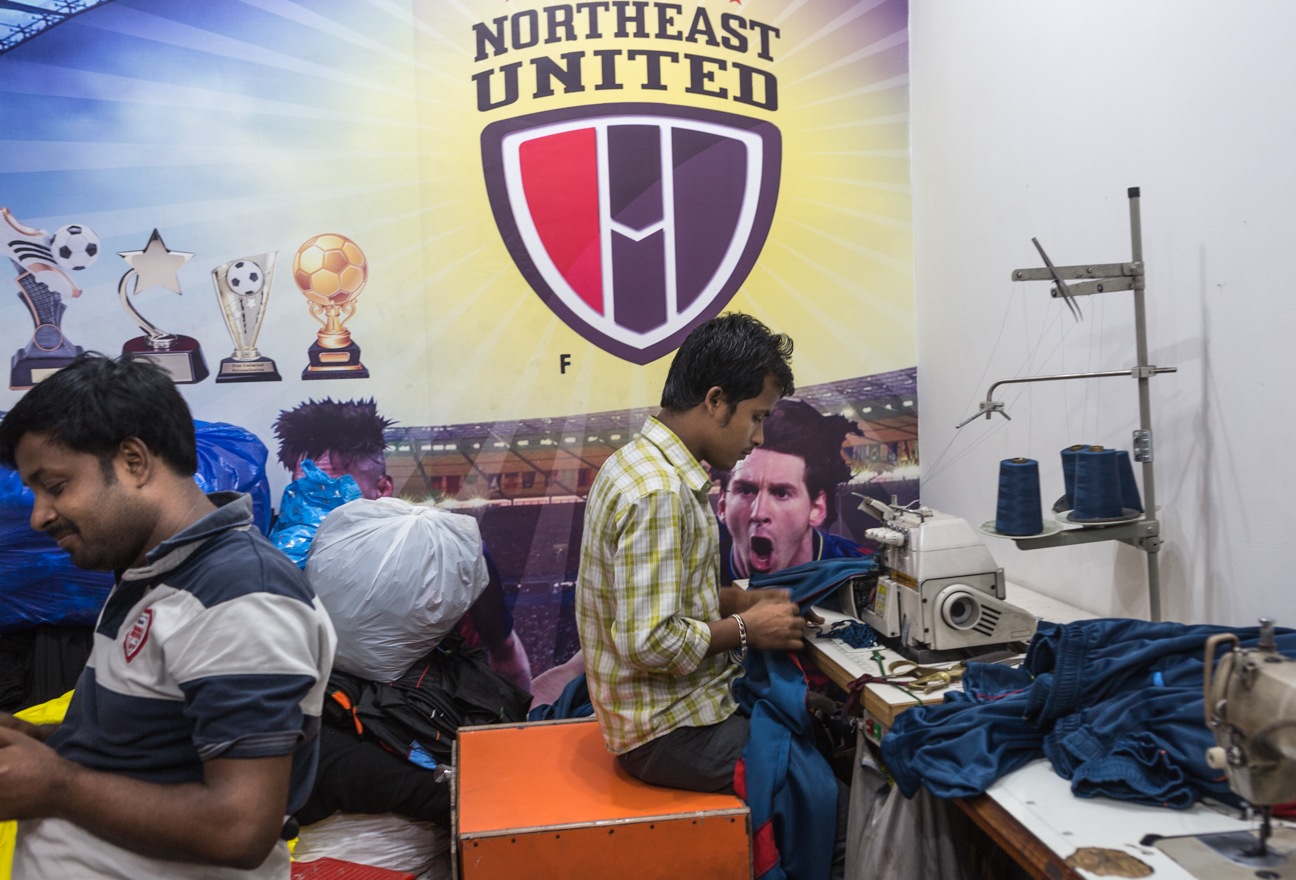 A local tailor in the Guwahati railway station area putting together replica football jerseys that flood the local markets and the wardrobes of the young. While authentic and "authorised" jerseys are readily available, the replicas are always in far greater demand. At the start of the ISL season, the Guwahati tailor has indicated his personal loyalties and puts together his version of the FC Barcelona strip. Lionel Messi roars in protest. 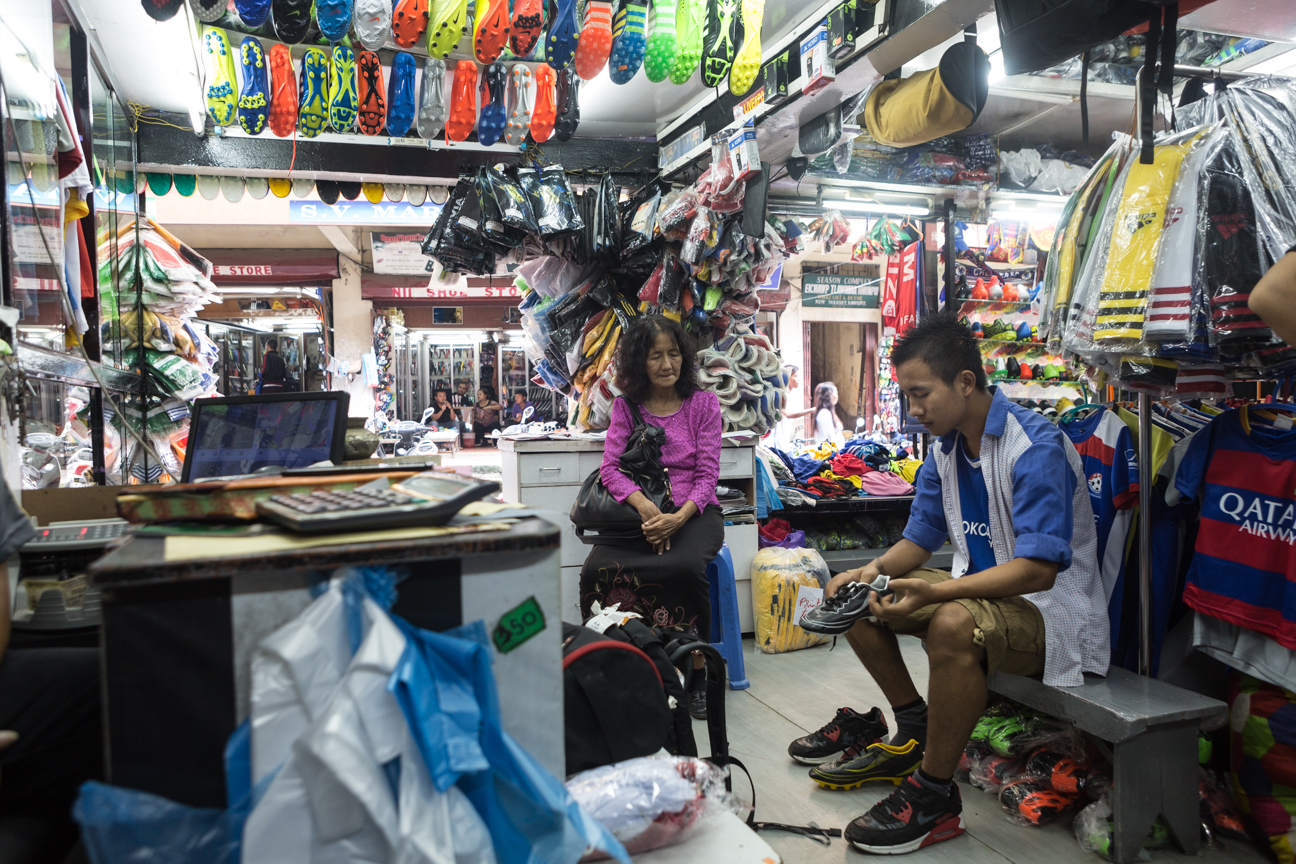 At the Rin Rin Store in Aizwal, someone is always looking for new boots. This is football central offering boots, balls, shin guards, jerseys, jackets and scarves. The club gear covers leagues across continents and nations. RinRin, named after the daughter of the owners, has also put its own logo on football jerseys, making and sponsoring strips for four out of eight Mizoram Premier League teams. Most MPL shirts cost Rs 250 and Rs 500 and in the Rin Rin Store, proudly share space alongside EPL and La Liga teams. 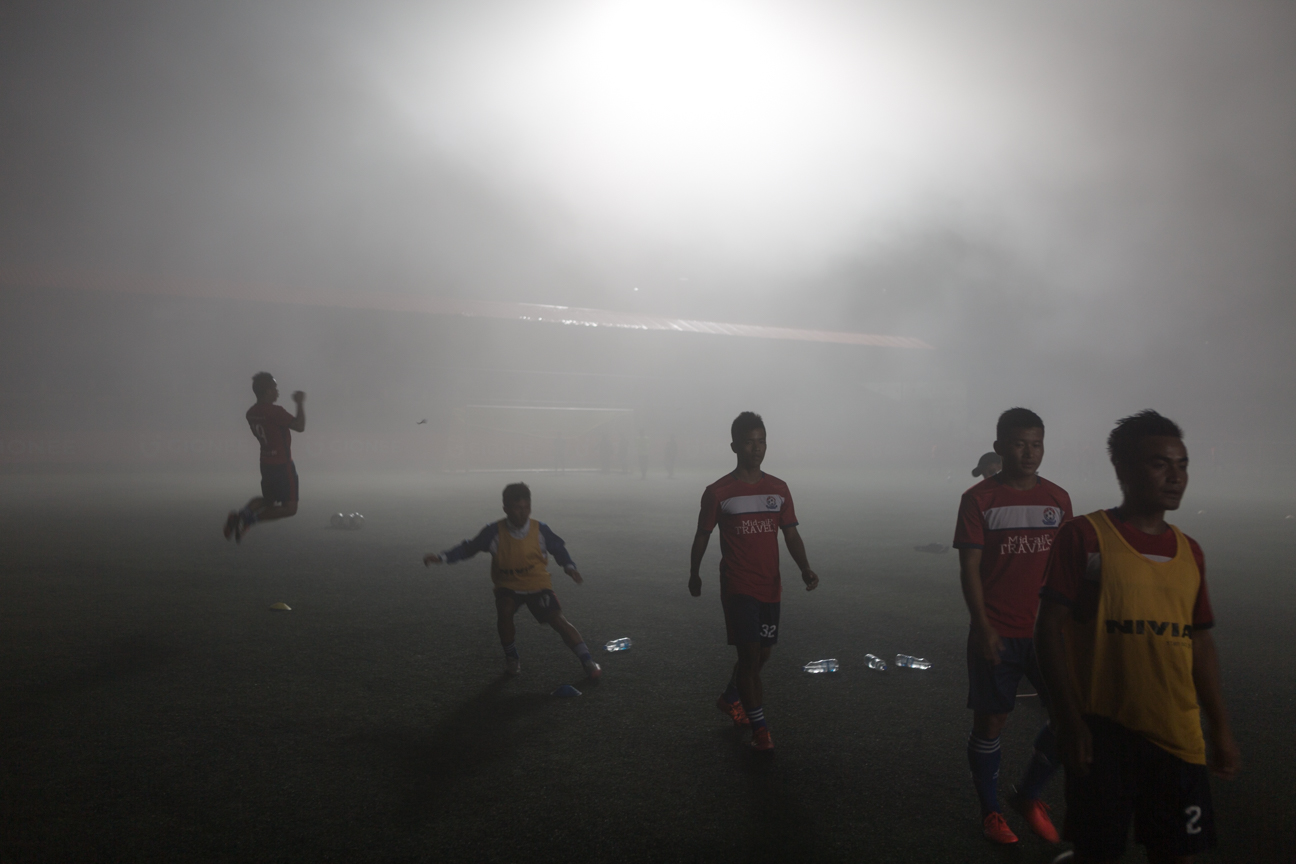 The clouds take over the Assam Rifles Ground in Aizawl stopping play in a Mizoram Premier League (MPL) match, bringing the Chanmari FC reserves onto the field of play to warm up and kill time. The MPL now in its sixth year, features locality teams from around Aizawl and forms a vital part of the town's social calendar. When play resumed after half an hour in this cloud-affected game, Chanmari beat defending MPL champions Aizawl FC 1-0 on their way to winning their second MPL at the season's end. 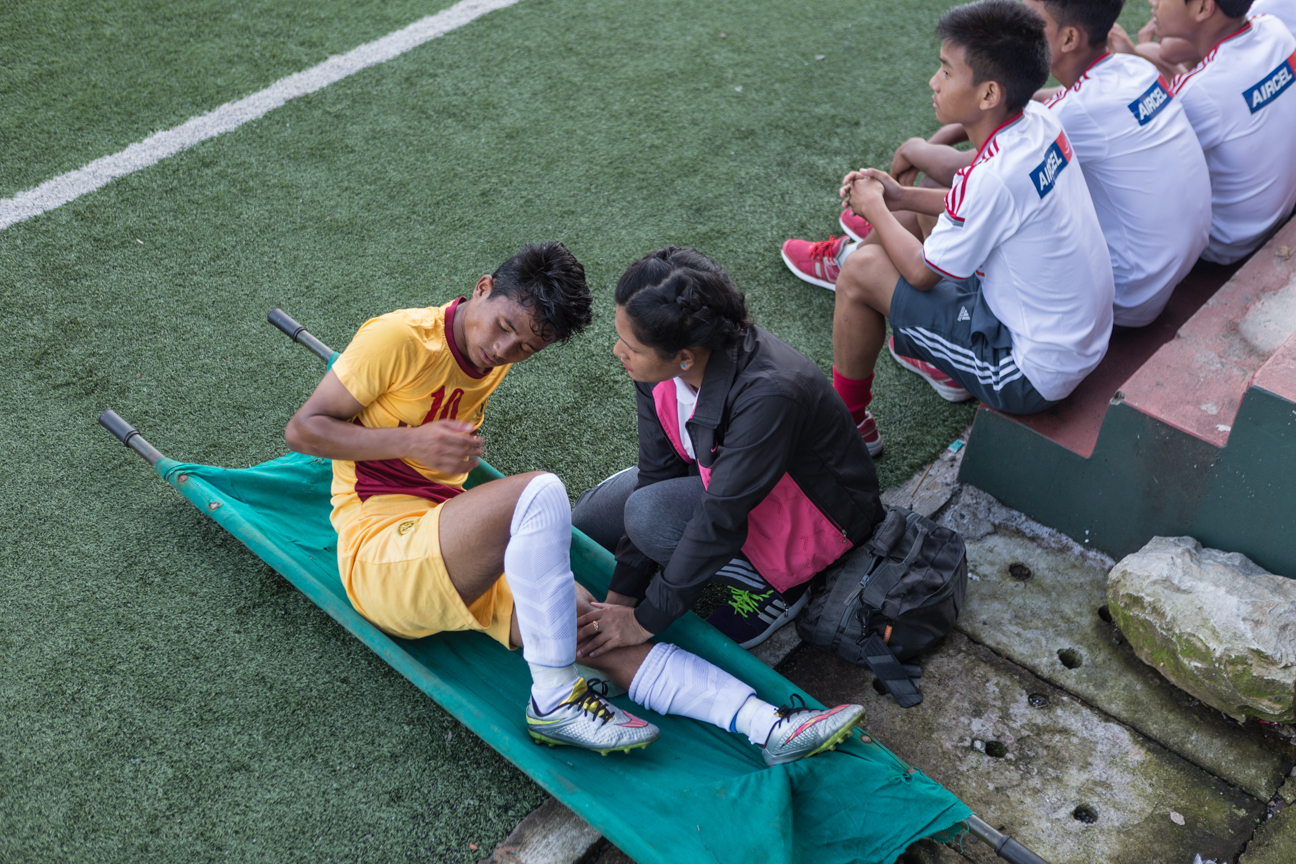 Royal Wahingdoh physio Yodakani Rymbai attends to an injured player at an Under-16 youth league match played at the Mawlai ground, against the Shillong Lajong under-16s. Both teams had female physios, with Lajong being handled by Laaiooley Passah. In 2015-16, Royal Wahingdoh finished third in their I-League debut season, then the best performance by a north-eastern club in the first division, but withdrew from the league the following season due to a lack of clarity around the future of the league. They continue to compete in regular regional and junior competitions and developed several India players. 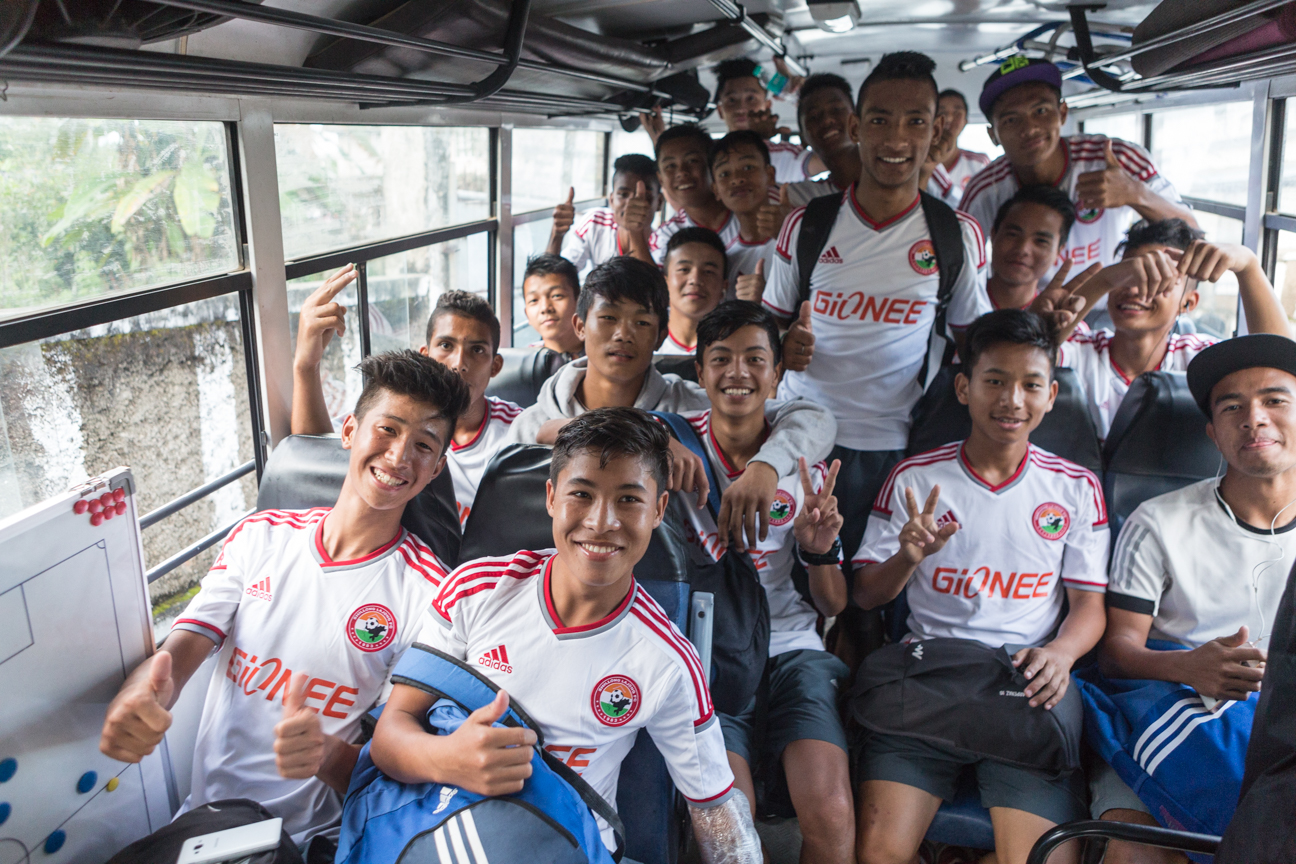 The Shillong Lajong under-16 team heads home after beating Royal Wahingdoh in an under-16 League match at Shillong's Mawlai ground. The first club from the north-east, to qualify for the highest level of Indian club football, the I-League - 1st division, Lajong has been known for its focus on the young across regions. The Shillong Lajong Football Club academy, set up in 2007, begins its programmes from the grassroots (from ages 6 to 10) and finds players for four age groups; under-18, under-16, under-12 and under-10, and has on average 80 players on its roster every year. As of 2016, it had signed players from each of the eight states of the north-east. 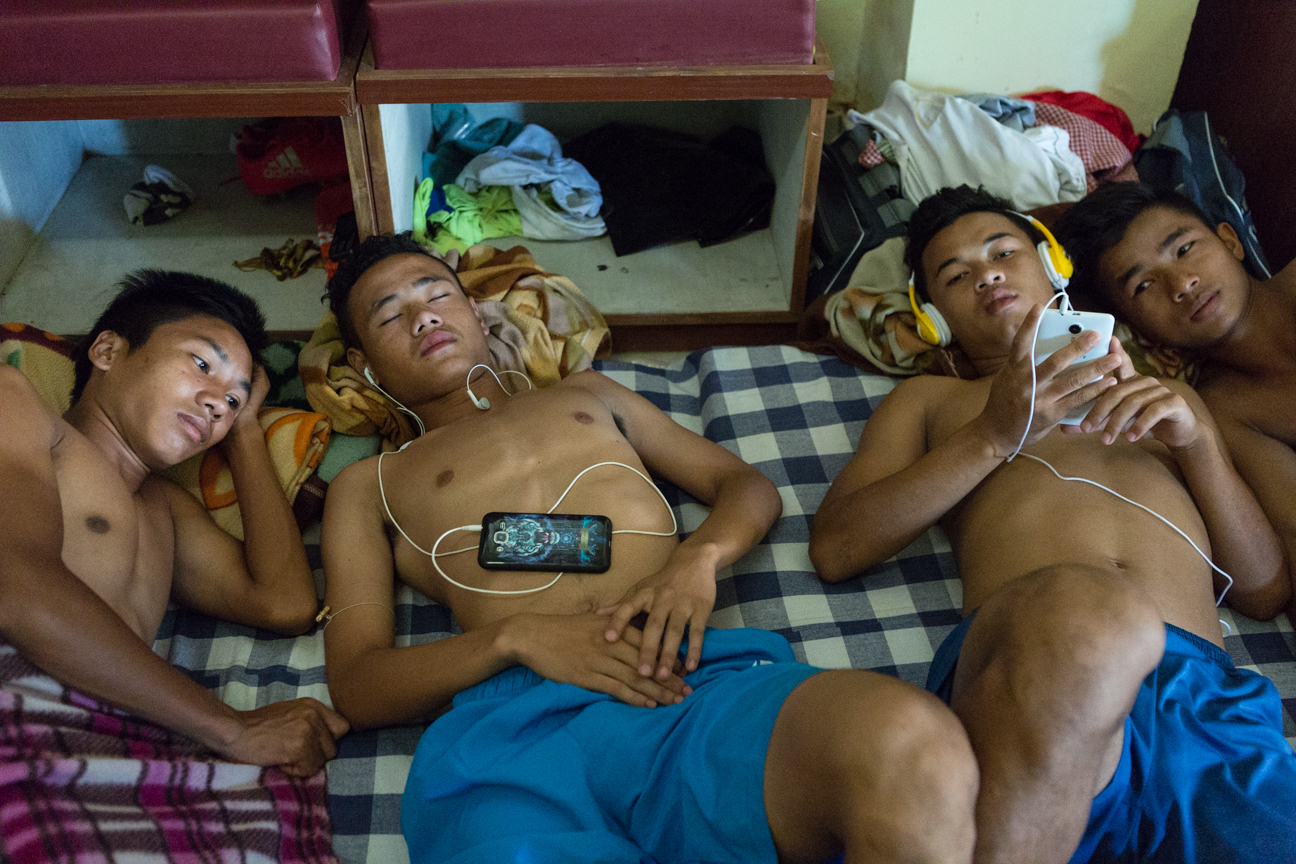 Teenage football players bunk down at the Sports Authority of India (SAI) Regional Centre dormitory in Guwahati. The players belong to the SAI Special Area Games Centre in Kokrajhar, which is seen as a nursery OF Assamese football, and were on their way to an age-group district-level event. The centre is now a sporting oasis in the hubbub of Guwahati, its 7.5 acres including a football field, athletics track and an indoor sports hall. It was one of the key venues of the South Asian Games (SAG) and will be a training venue for the FIFA under-17 World Cup. 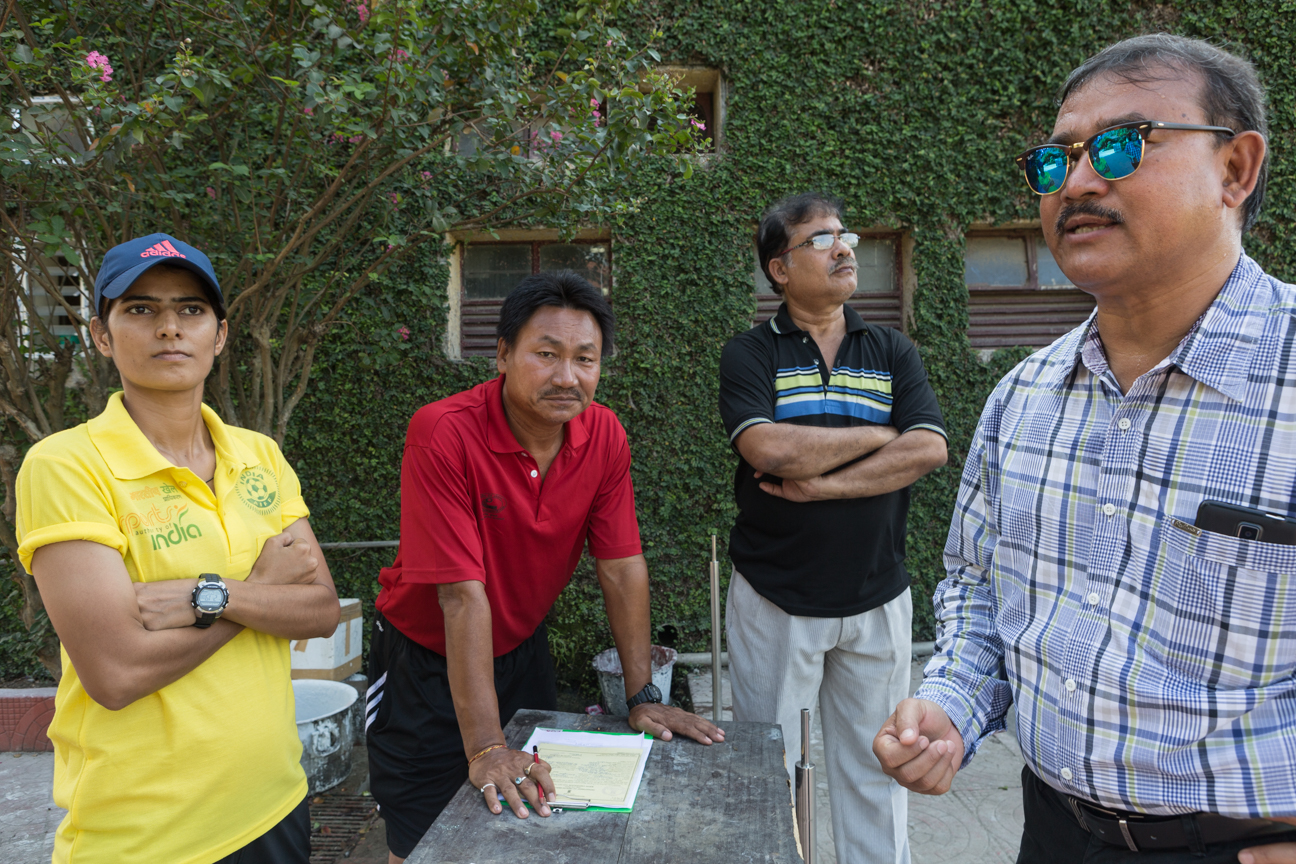 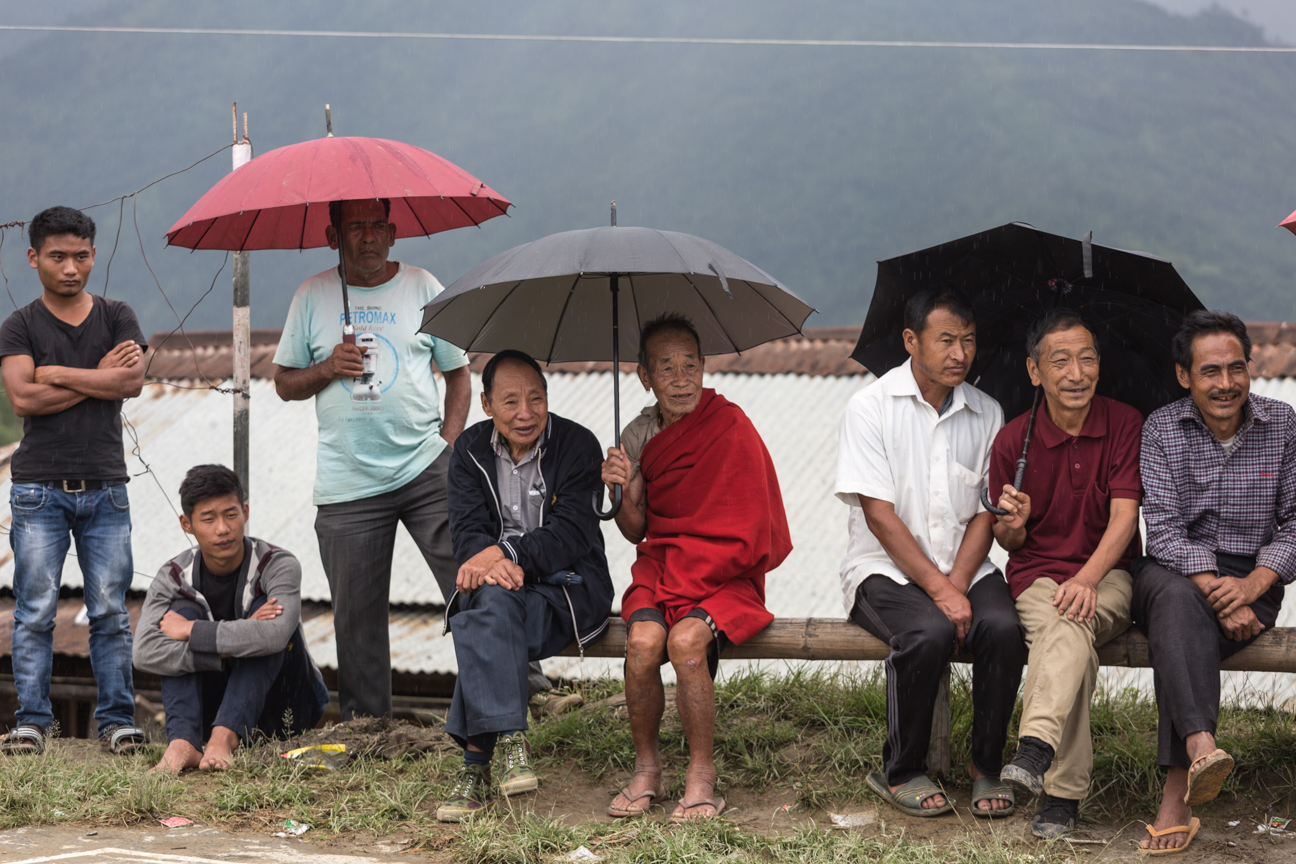 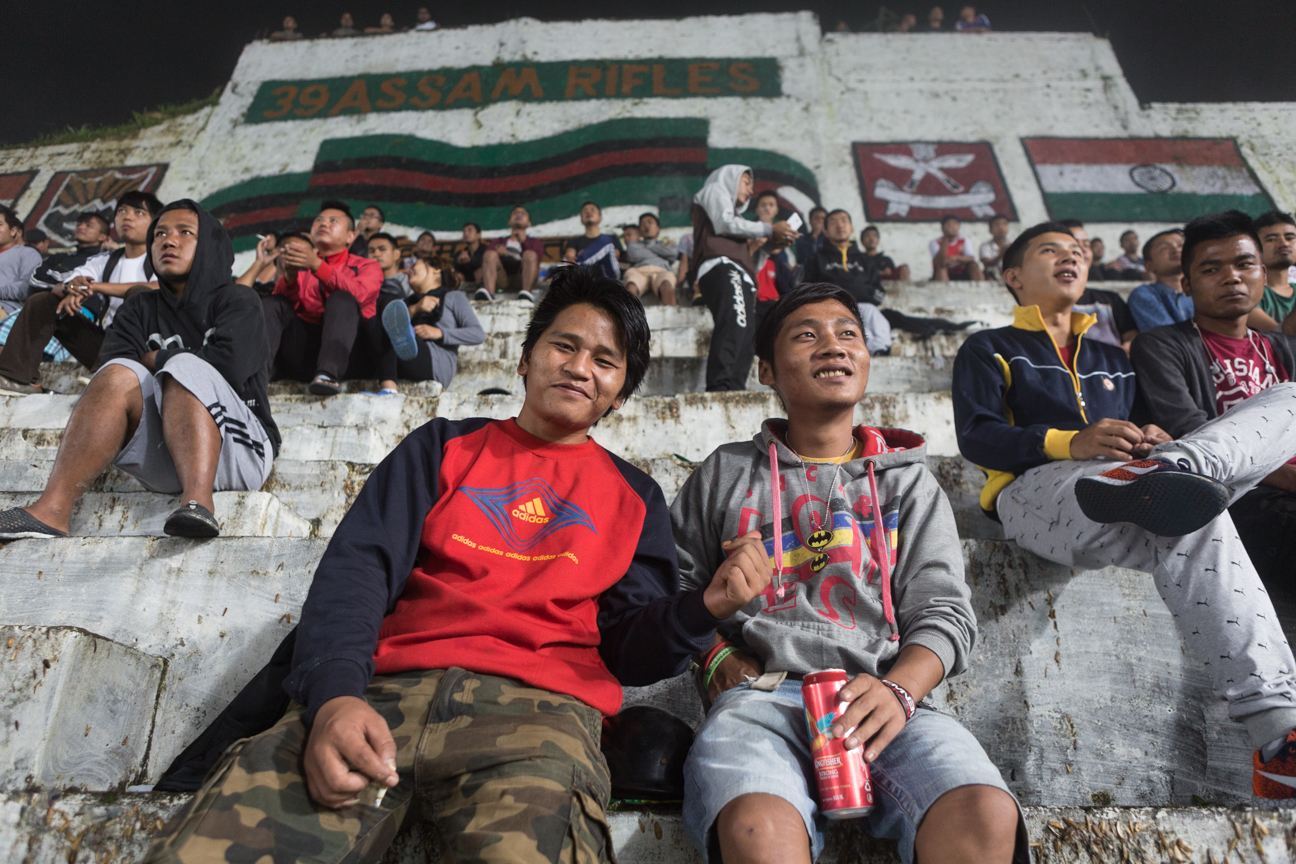 Play some football, pull in the spectators. The white-washed terraces of the Assam Rifles Ground in Aizawl make it a favourite spot for watching whatever grade of football is on. The Assam Rifles, called Sentinels of the North-East, are the oldest para-military force in India and have allowed this scenic football ground to be used to stage matches, their personnel often watching from the barracks. Tickets for the public are cheap, access is easy and football makes for a relaxed night out with the boys. 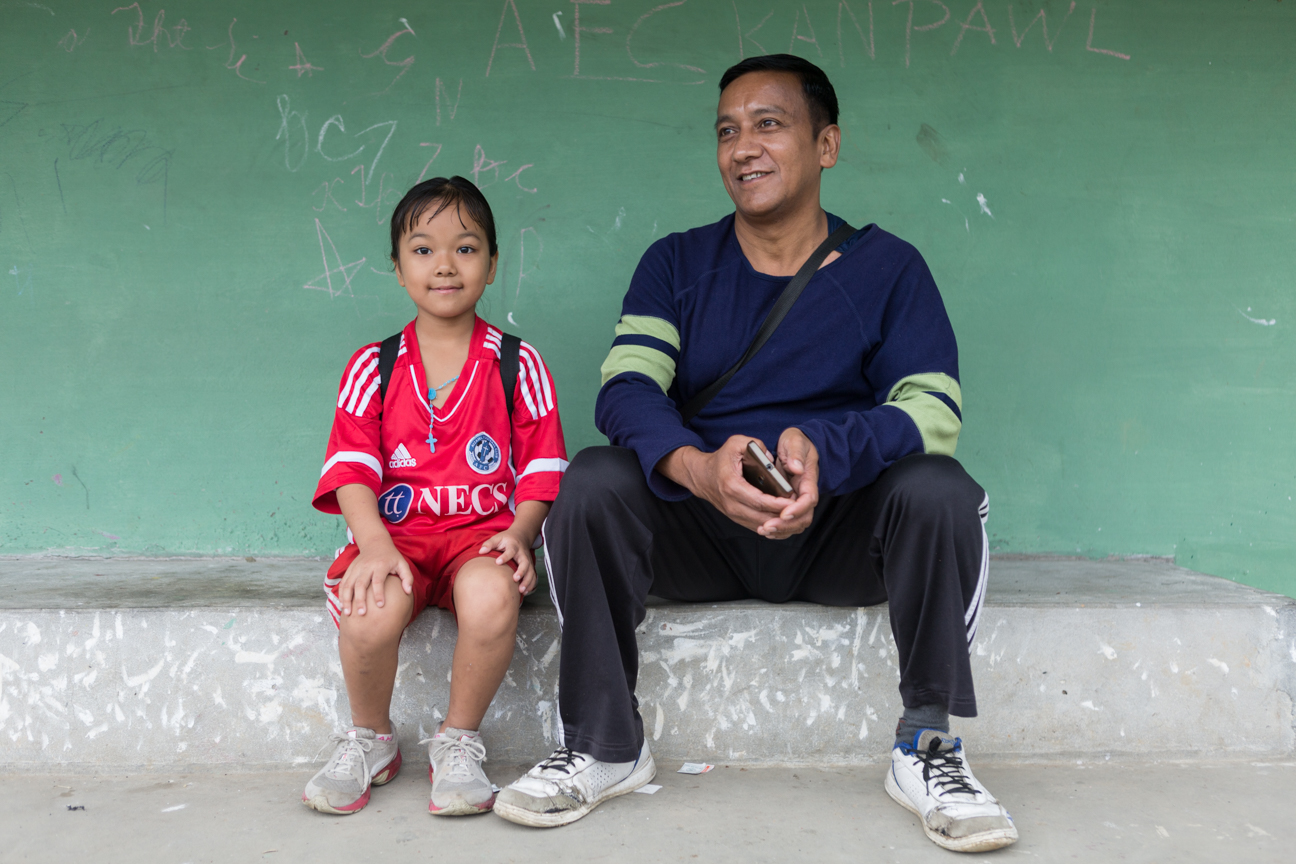 A sport for everyone. Moitei, age 8, and her father at an MPL game in Aizawl; credit for the inclusion of girls in competitive football must go first with Manipur, who sent two teams to the first ever Indian Women's League. The third north-eastern team in the field of ten was Royal Wahingdoh of Meghalaya. 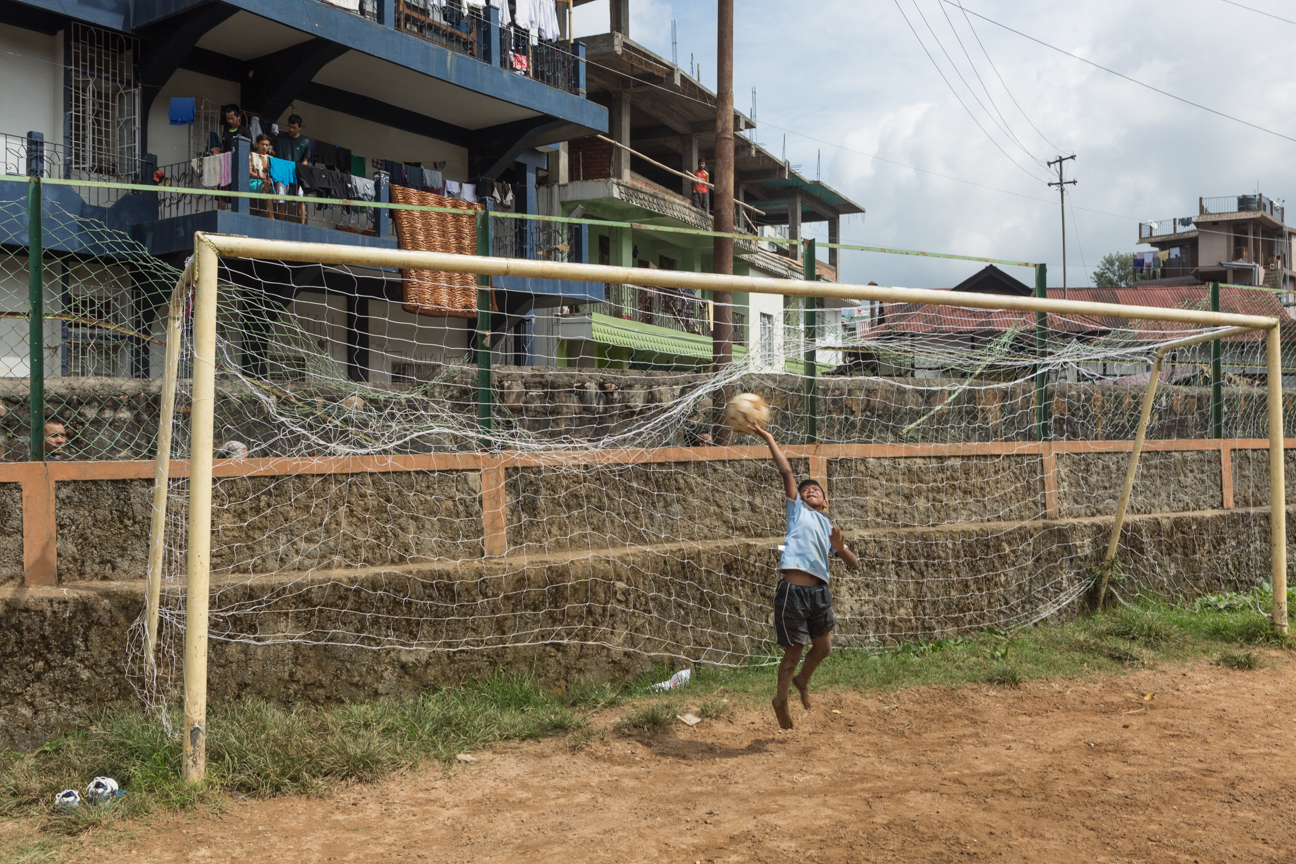 Andy Maliang, 12, keeps goal at the Malki sports ground near the Upper Shillong Forest area. Maliang, a 5th standard student at Malki Presbyterian School grew up in the housing blocks alongside the grounds, his father one of the grounds keepers. Maliang remembers playing football with his friends ever since they learnt how to run. 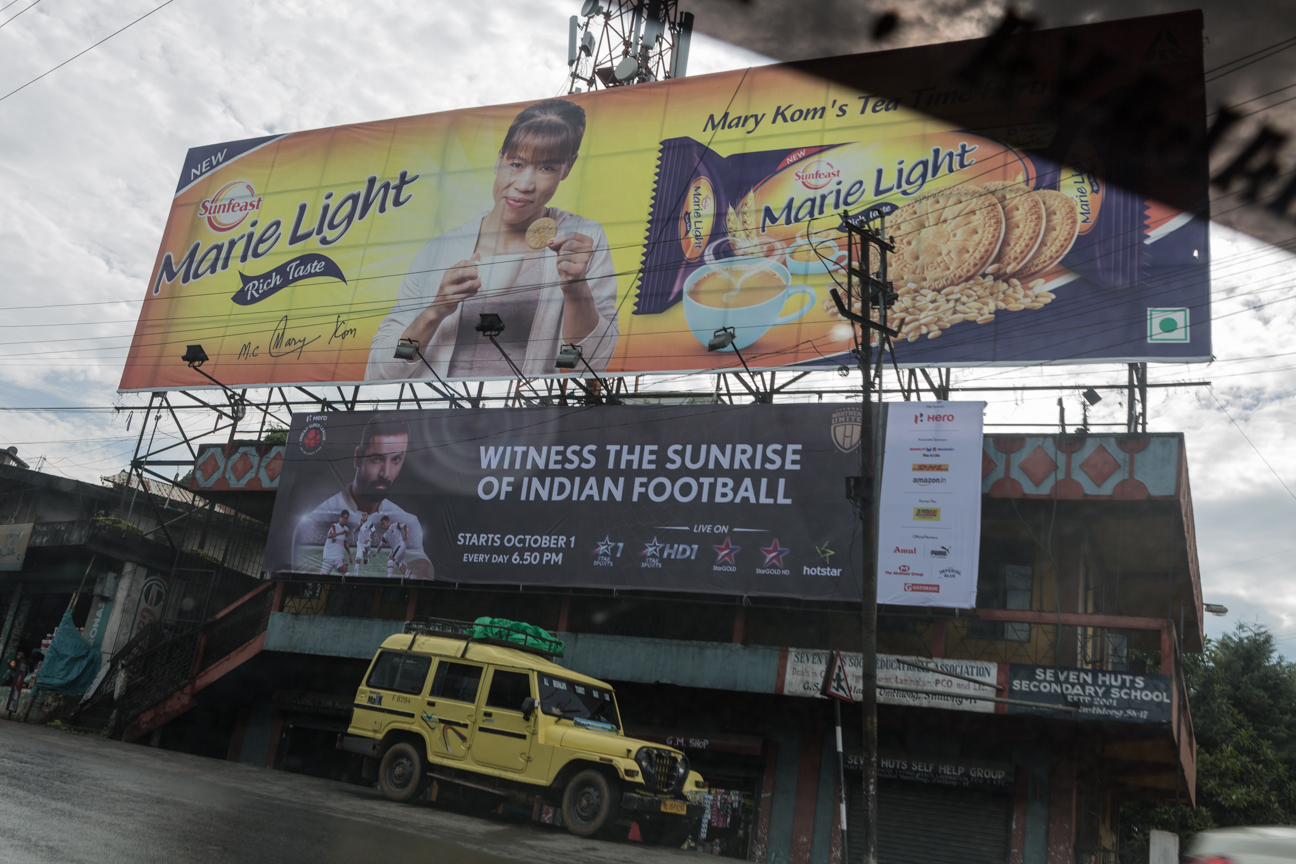 The north-east's most predominant sporting face is boxer MC Mary Kom, who belongs to Manipur but represents the entire region. Despite five world championship titles in her career, it was Mary's 2012 Olympic bronze which took her into every Indian home and made her the face that could launch a thousand products on billboards across the country, particularly in north-east. In Central Shillong, Mary's image looms over movie star John Abraham, the most prominent owner of the ISL club NorthEast United FC. 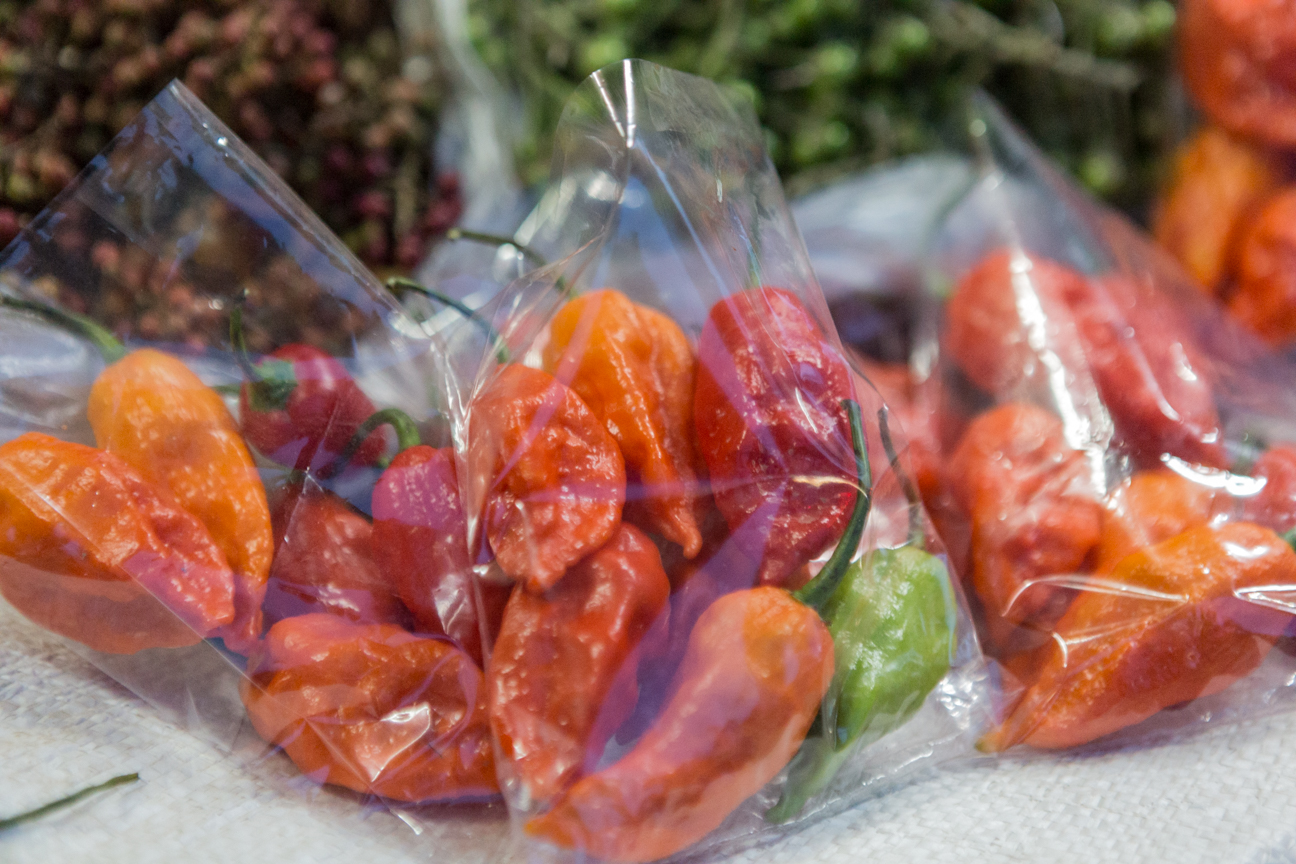 The Bhot Jolokia (Capsicum chinense) or the Ghost Chilli is known by many names across the north east - Bih jolokia, Borbih jolokia, Naga jolokia, Nagahari, Naga Morich, Raja mirchi, Umorok and Malcha-Phoh. A decade ago anointed the world's hottest chilli pepper, its pungency finds its distinctive place in the varied cuisine across the states. If the North-East had to pick its official spice the Bhot Jolokia would have to be it. 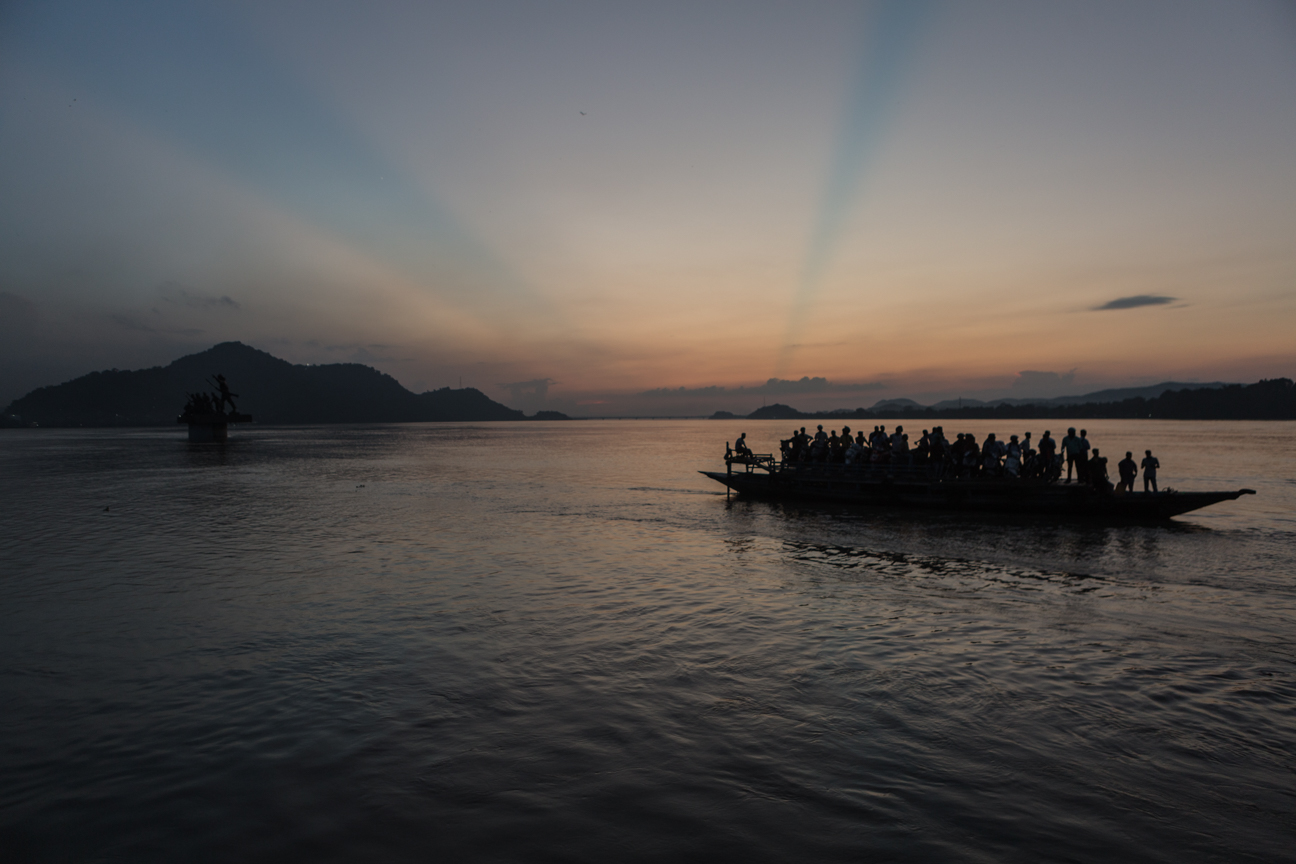 A commuter boat takes workers home as the sun goes down on the Brahmaputra in Guwahati. The Brahmaputra flows through Arunachal Pradesh and onto Assam and Bangladesh. Across its final stretch, it is called the Meghana before it makes its way into the Bay of Bengal. The Brahmaputra covers almost the entire width of the north-east and its 2900kms are a source of life for clans and cultures. 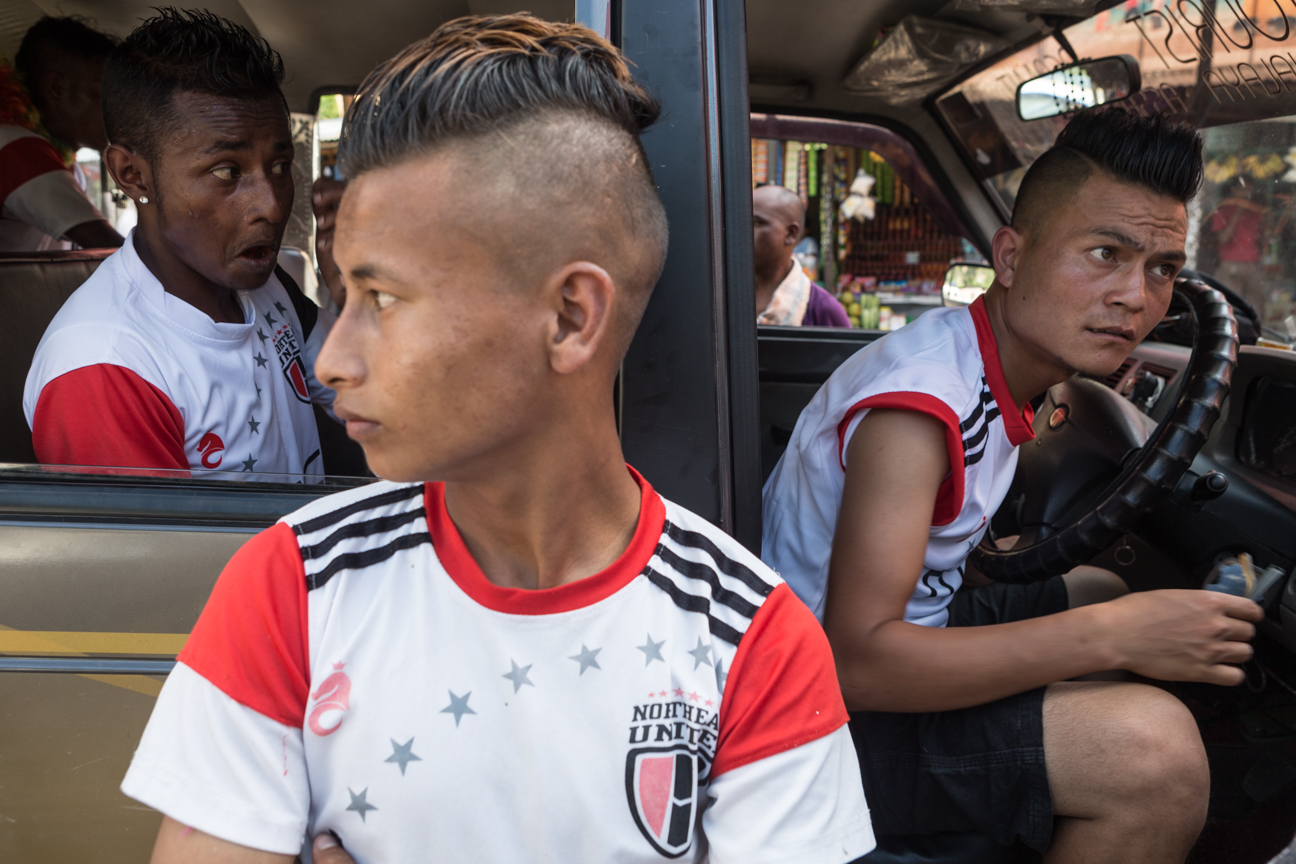 Every year since the Indian Super League (ISL) planted its annual tent in Guwahati in 2014, football fans around the region have tied themselves to the club called NorthEast United. Its slogan is "Eight States, One United" and whenever an ISL match is to be held in Guwahati, a caravan begins to move towards the venue from nearby hills. Like these young fans from Shillong, packed into a shared public transport who stop over halfway through their journey, for a quick snack of pork chops with beer at Nongpoh Midpoint. 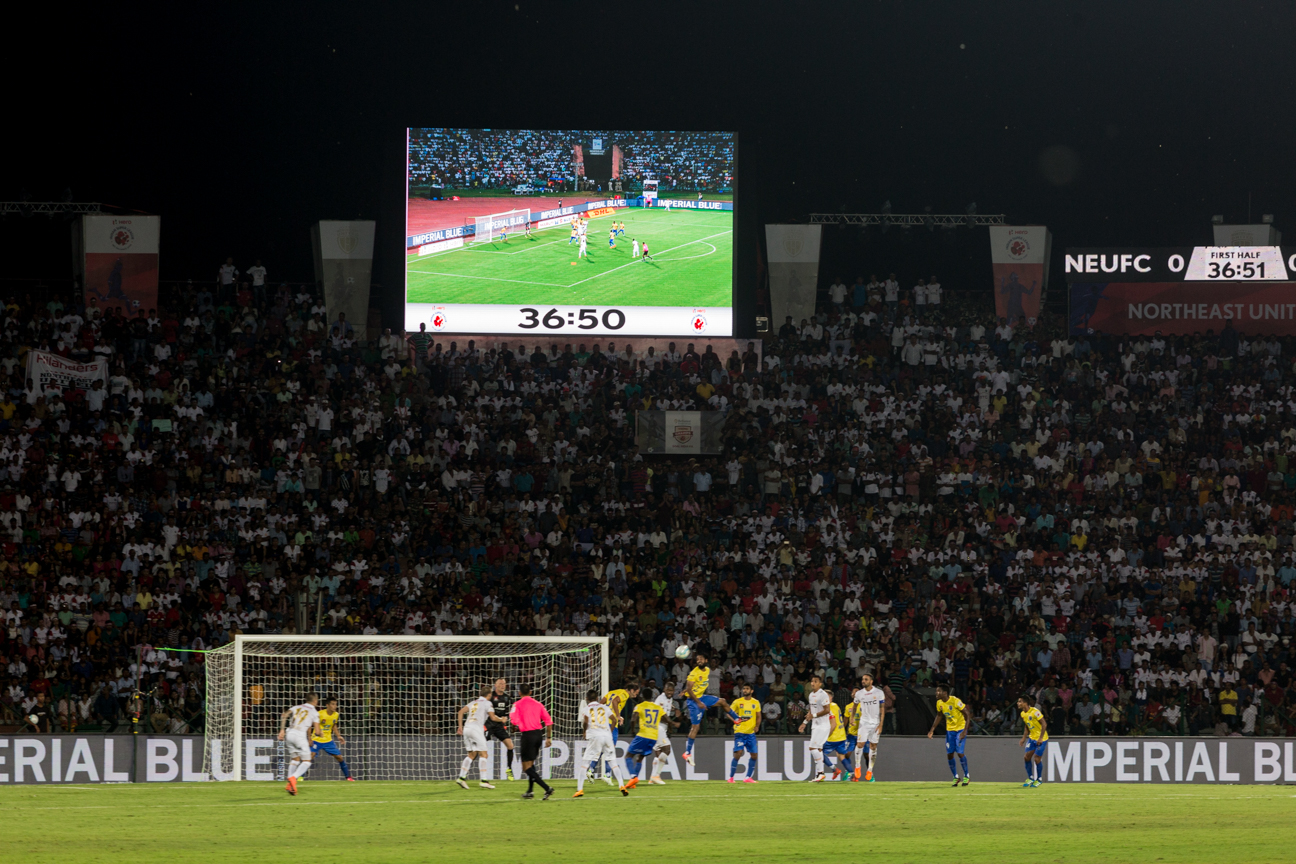 When big-ticket football comes to the region, the north-east shows its love. A packed Indira Gandhi Athletic Stadium, (capacity 25,000) in Sarusajai, Guwahati hosted the first match of the 2016 ISL season between NorthEast United and Kerala Blasters. An evening which began with an opening ceremony full of Bollywood razzmatazz, ended in a 1-0 win for the home team. 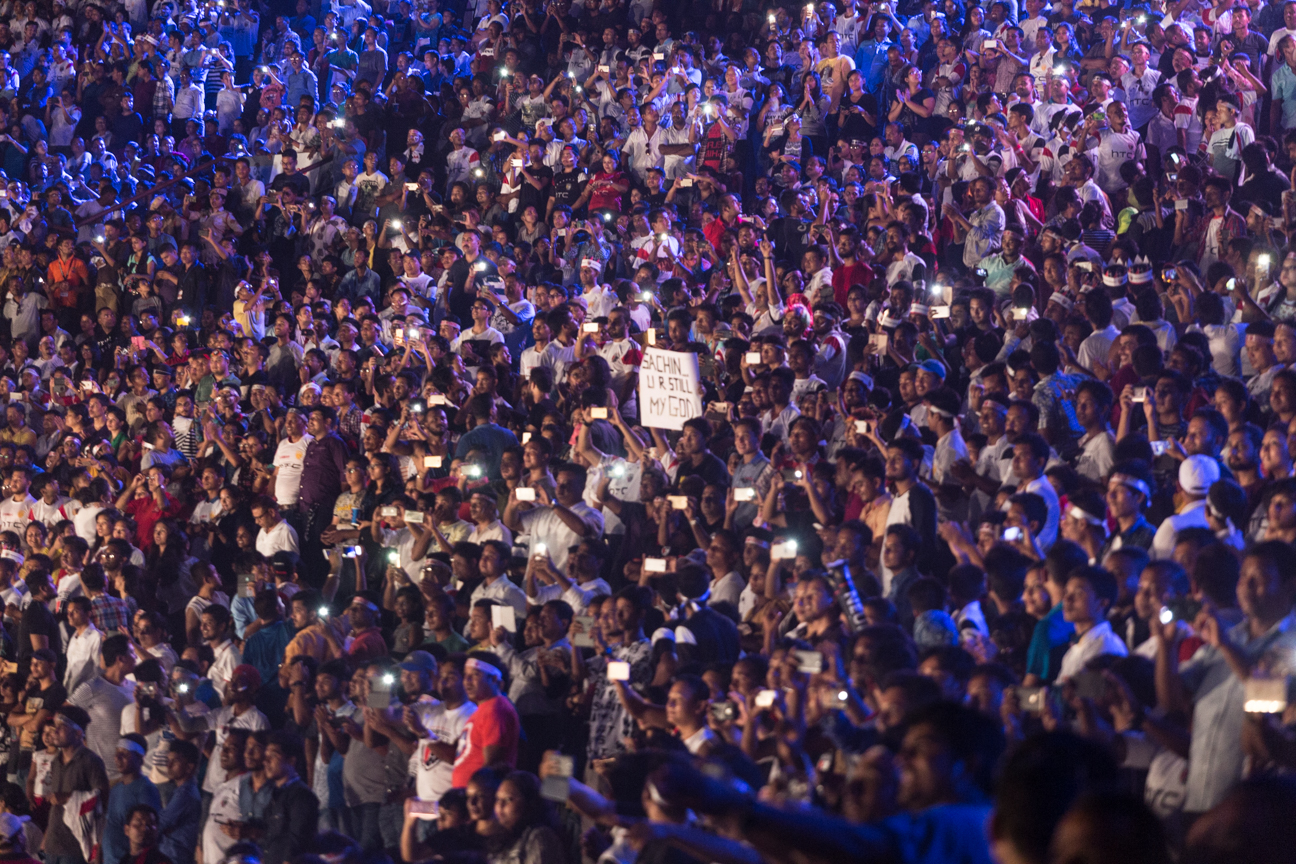 Amidst a 25,000-strong crowd at the opening match of the 2016 ISL, a NorthEast United fan lets one of the Kerala Blaster co-owners know who really lorded over his pantheon. Despite the popularity of football in the north-east, the lure of the Kerala co-owner and cricketing icon Sachin Tendulkar is hard to resist. 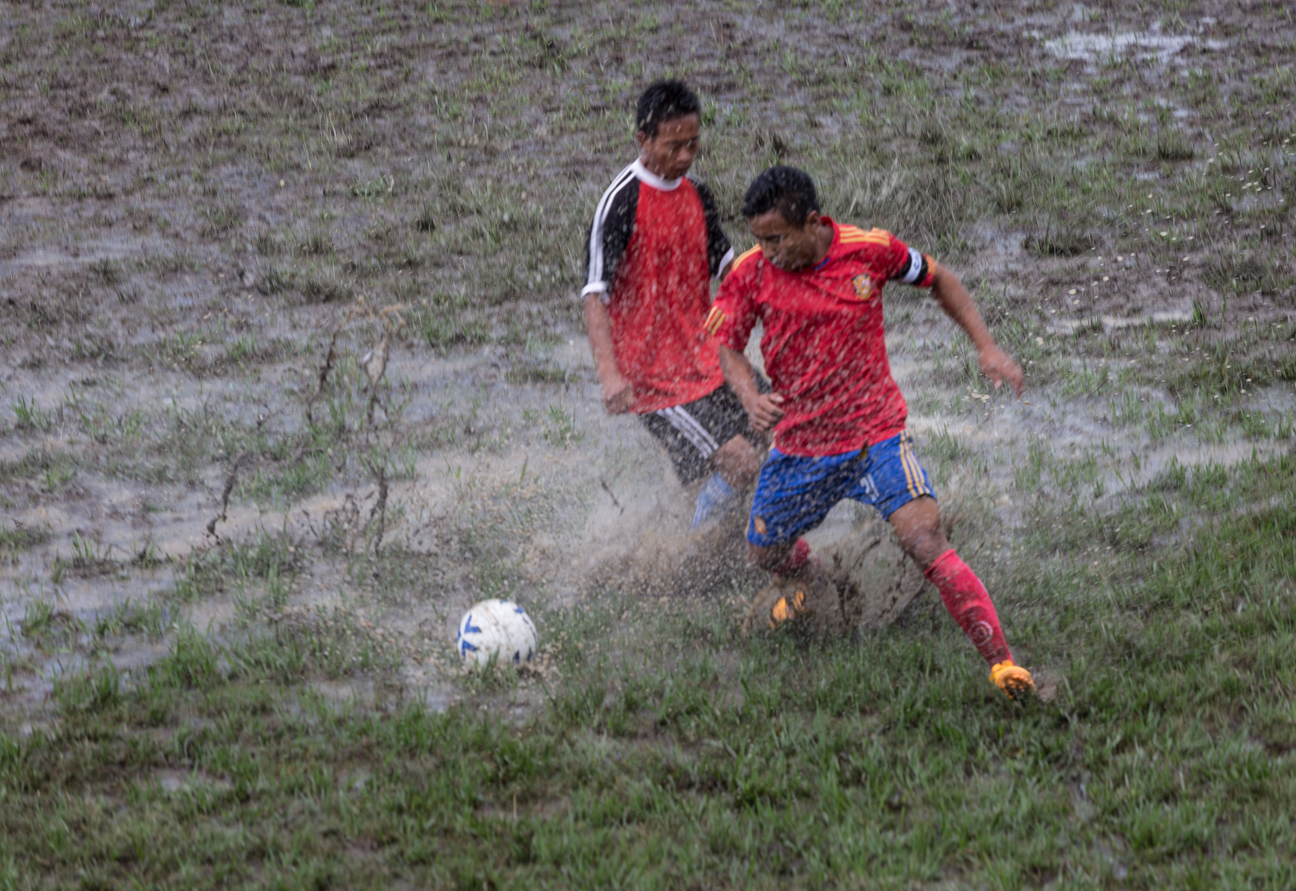 In the north-east's hill tracts, this is what a football ground looks, feels and behaves like. Five months of sub-tropical monsoon showers and regular sprinking of rain through the rest of the year make the turf difficult to tend or keep under control and through that, cannot even offer reasonable playing surfaces for football. Not that it stops the players from making the most of their strength and perseverance to run at the ball and attempt to control it. This is Chizami, Nagaland.