Editor's Note: This was originally published in 2017, when Derek Jeter's jersey number was retired by the New York Yankees.

Years after his death, legendary PA announcer Bob Sheppard's voice -- The Voice of God, as it is known in the Bronx -- still could be heard at Yankee Stadium, a taped introduction that played a handful of times each home game:

For two decades, those words preceded a host of iconic moments at the plate. Jeter won five World Series rings. He smacked 3,465 career hits. His No. 2 was retired by the New York Yankees. And on Wednesday, he will be inducted into baseball's Hall of Fame.

While those titles and statistics are impressive, it's those iconic moments -- not only at bat, but in the field and even in front of a microphone -- that tell the full story of The Captain.

Here are 10 of those moments, along with the other voices -- the radio and television play-by-play calls -- that added an exclamation point to so many of Sheppard's opening statements. 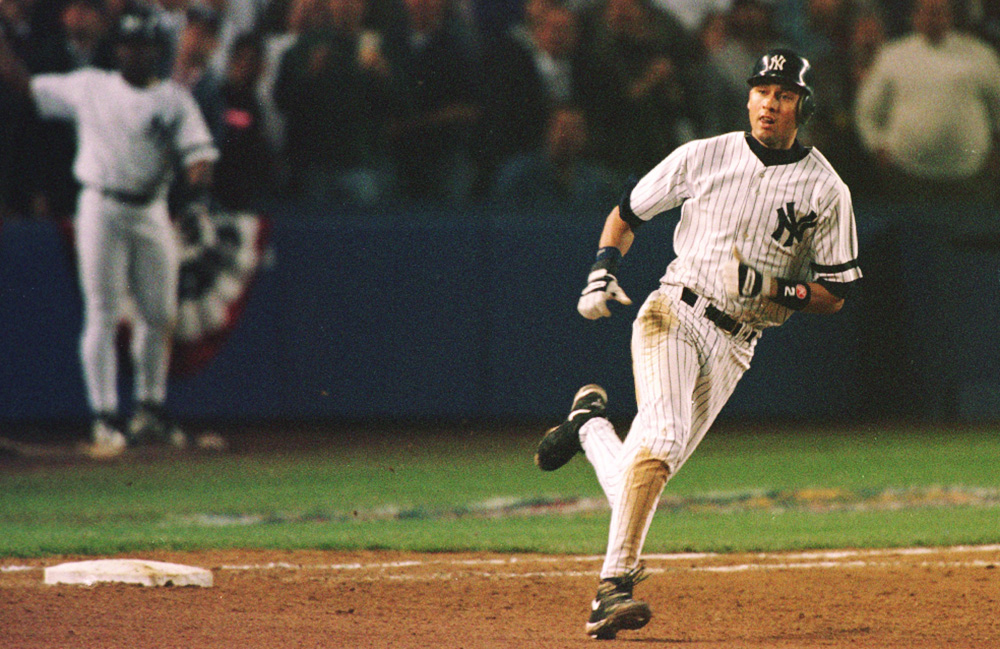 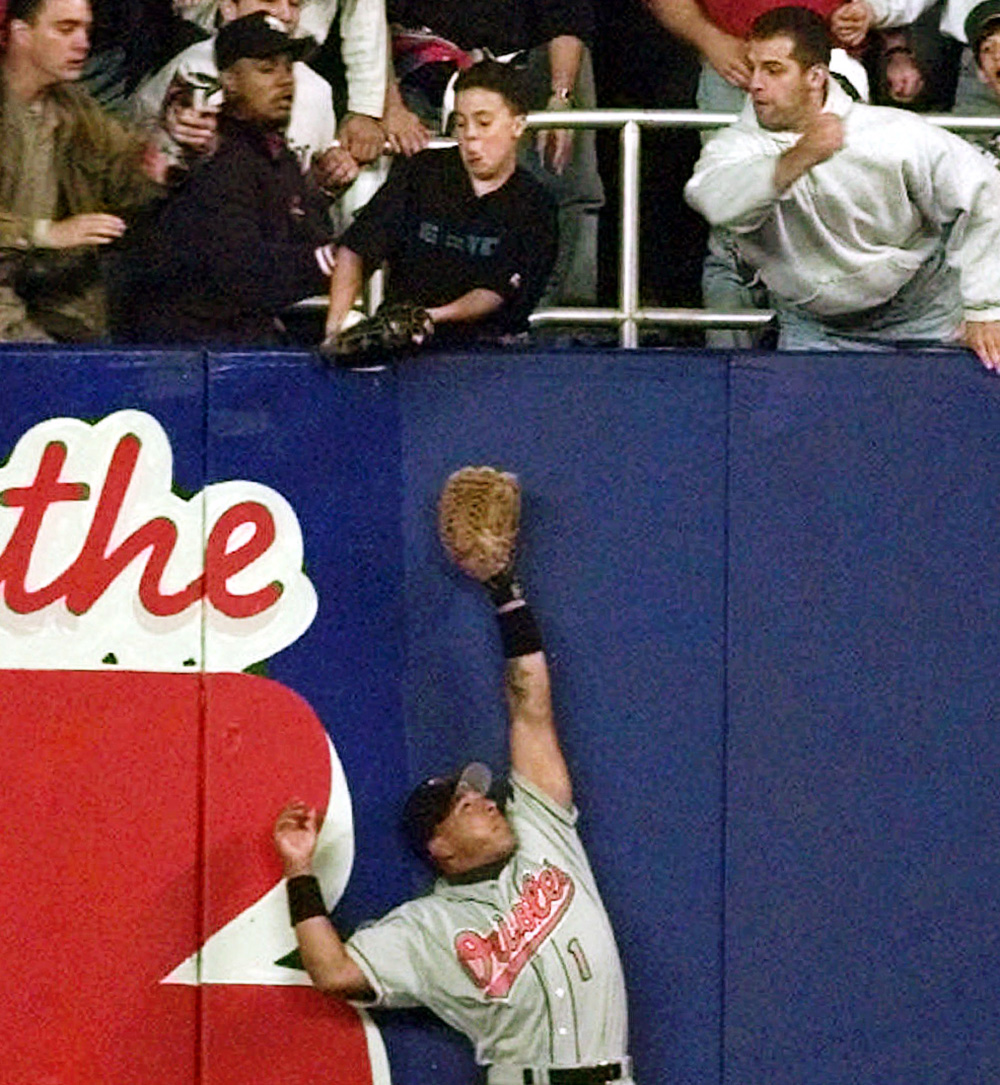 With the Orioles leading 4-3 in the eighth inning, a 22-year-old Jeter, soon to be named American League Rookie of the Year, hits a ball deep to right field. Tony Tarasco tracks it all the way to the wall, where 12-year-old Yankees fan Jeffrey Maier catches it and pulls it back into the seats. Jeter is awarded the home run, and the call is upheld despite much protest from Baltimore. 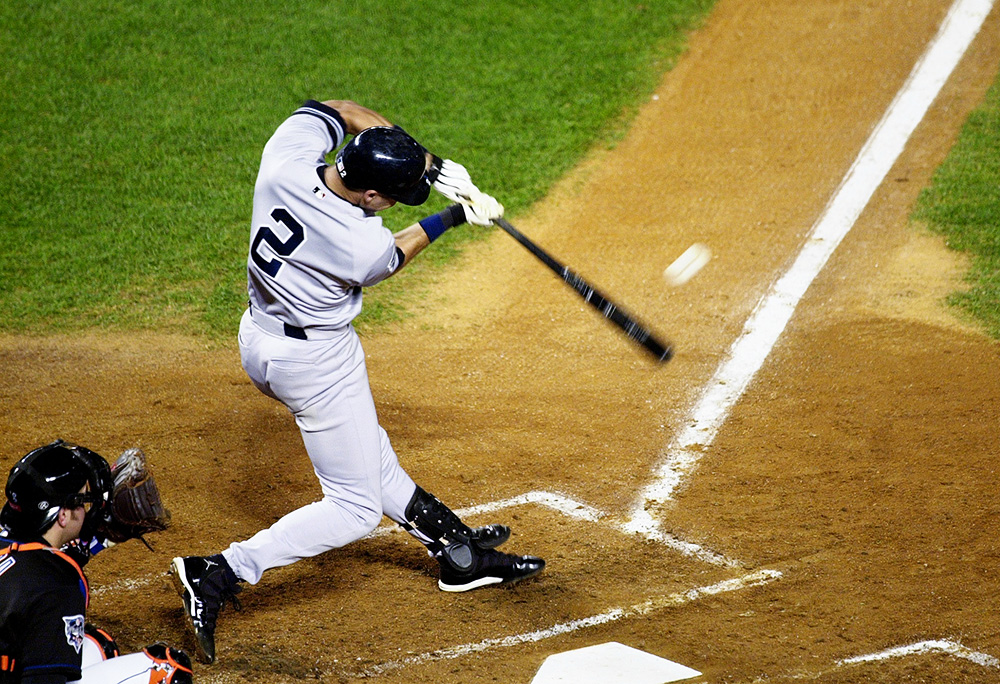 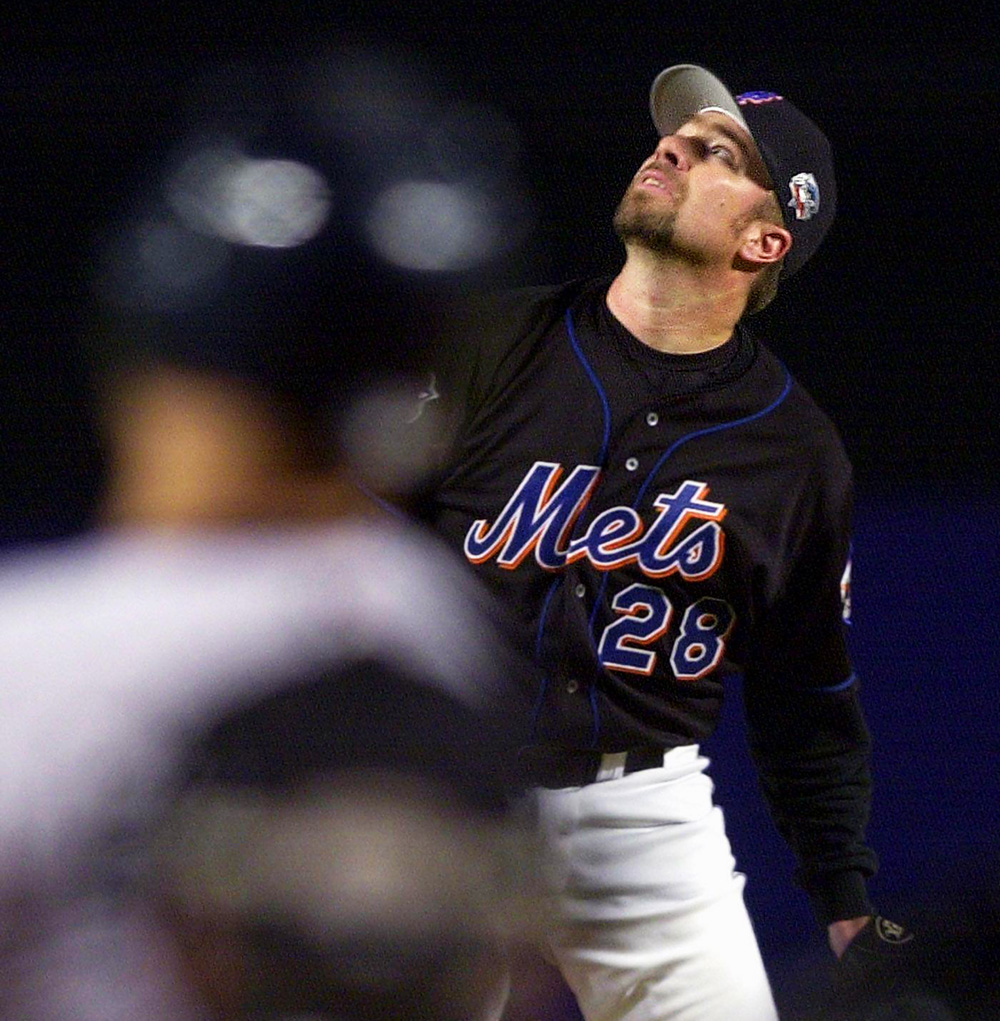 In the top of the first inning, on the very first pitch of the game, Jeter smokes a fastball to left for a home run off Bobby Jones. Jeter goes on to win MVP of the 2000 World Series, as the Yankees defeat the crosstown rival Mets in five games.

“A home run for Derek Jeter on the first pitch of the game!” -- Jon Miller/ESPN 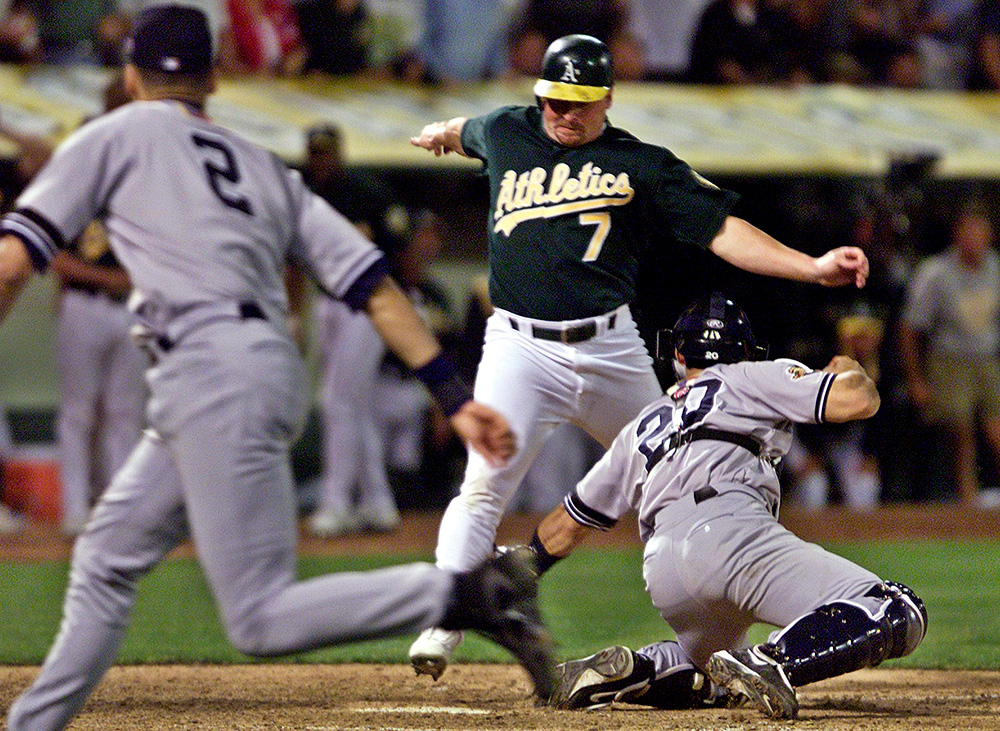 With Jeremy Giambi on first base, Mike Mussina delivers to Terrence Long, who drives a double down the right-field line. Yankees outfielder Shane Spencer fields it, but he overthrows the cutoff man. Seemingly out of nowhere, Jeter sprints across the first-base line to scoop up the ball and flip it to catcher Jorge Posada, who applies the tag to Giambi at home. 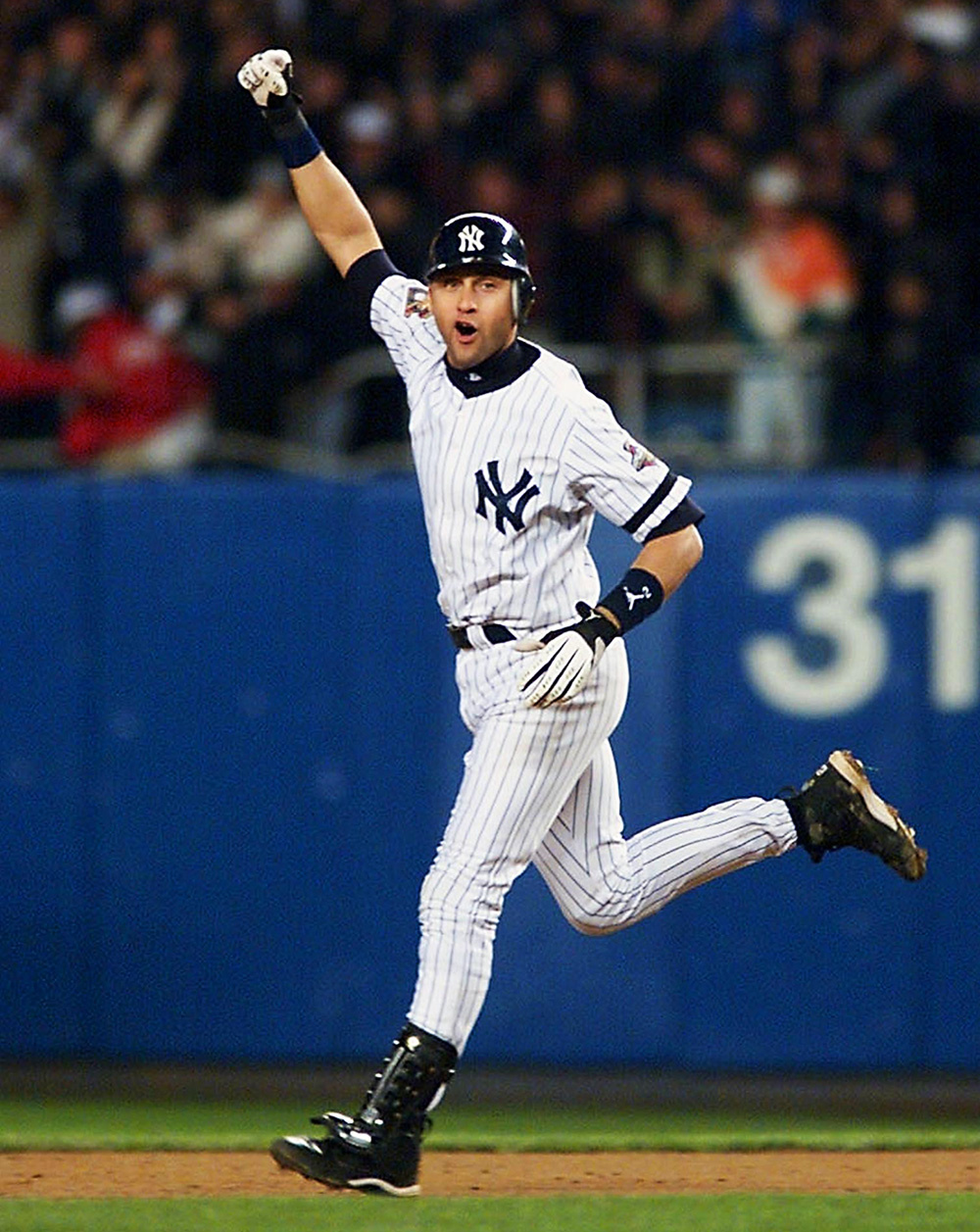 With two outs in the bottom of the 10th inning in the first World Series game ever played in November -- it had actually started on Oct. 31, but the clock had just crept past midnight in the Bronx -- Jeter hits a walk-off home run off Byung-Hyun Kim to tie the series 2-2 with Arizona.

“A home run ... Derek Jeter, into the first row of the stands down the right-field line, and the Yankees win it in the 10th inning and have tied this World Series.” -- Jon Miller/ESPN 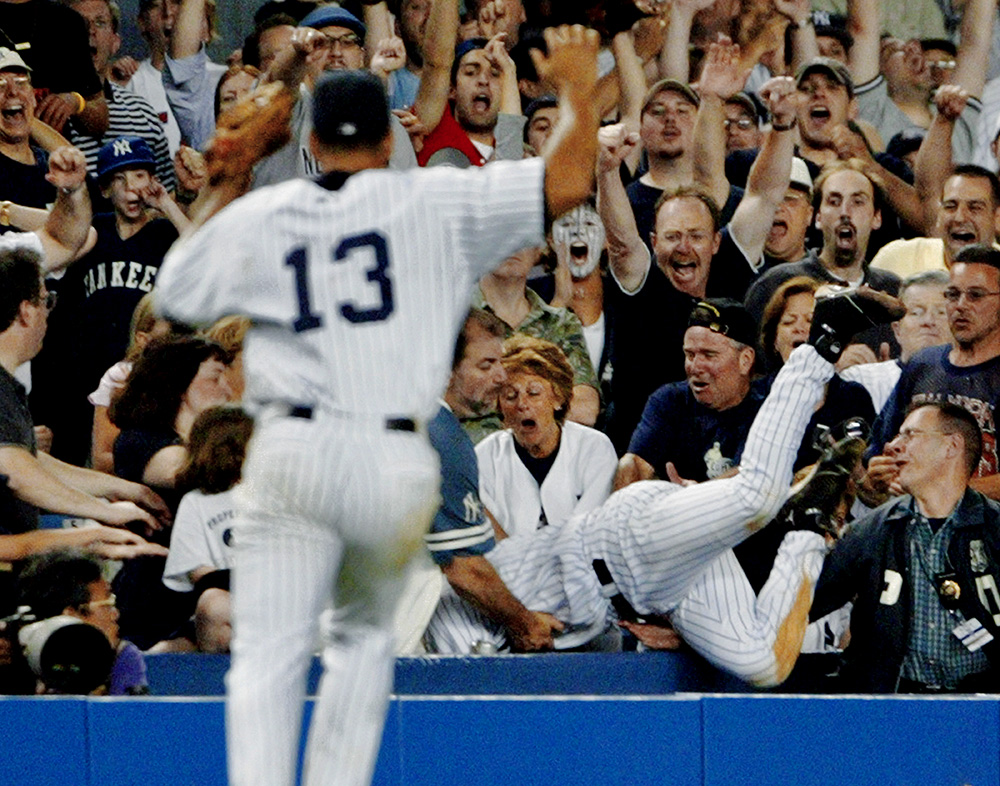 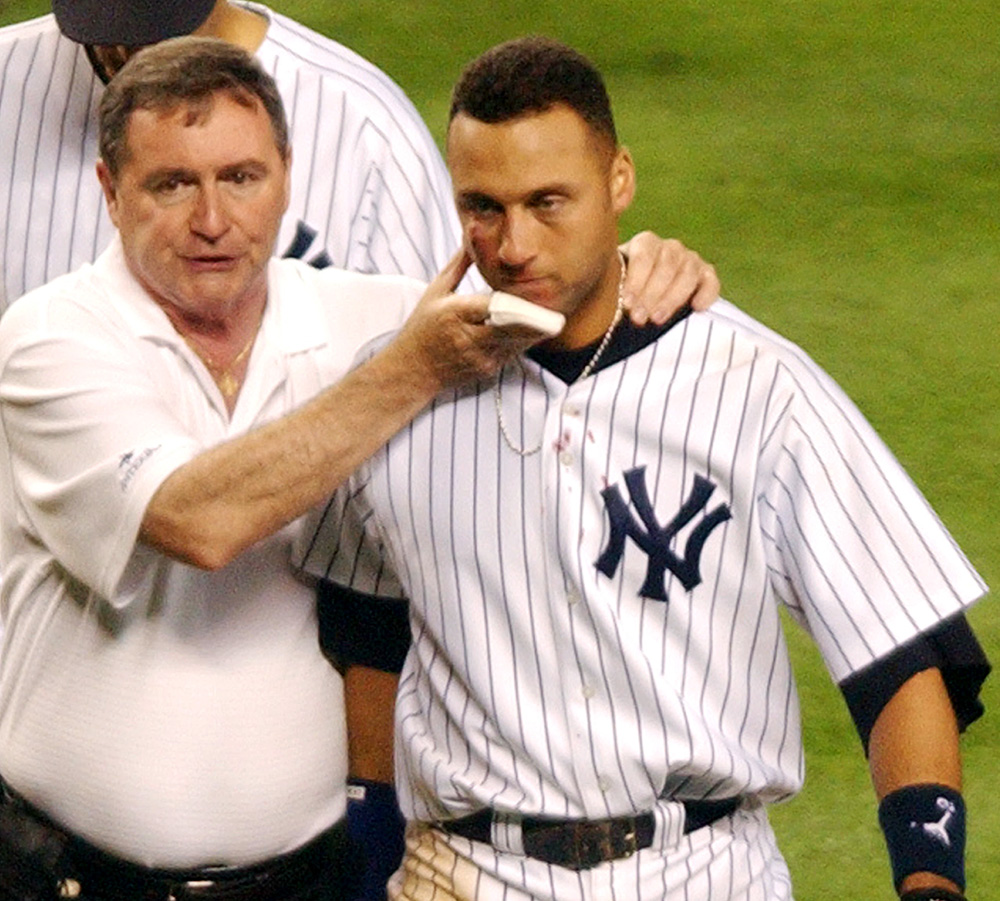 Tied 3-3 in the 12th inning, Trot Nixon loops a ball to shallow left field. Jeter puts on the jets and makes the catch, crashing head-first into the stands at full speed, emerging bruised and bloodied. The play helps keep Boston from taking the lead, and the Yankees go on to win 5-4 in 13 innings.

“Jeter on the run, makes the play. And flies into the stands! Oh, what a play by Derek Jeter!” -- Michael Kay/YES 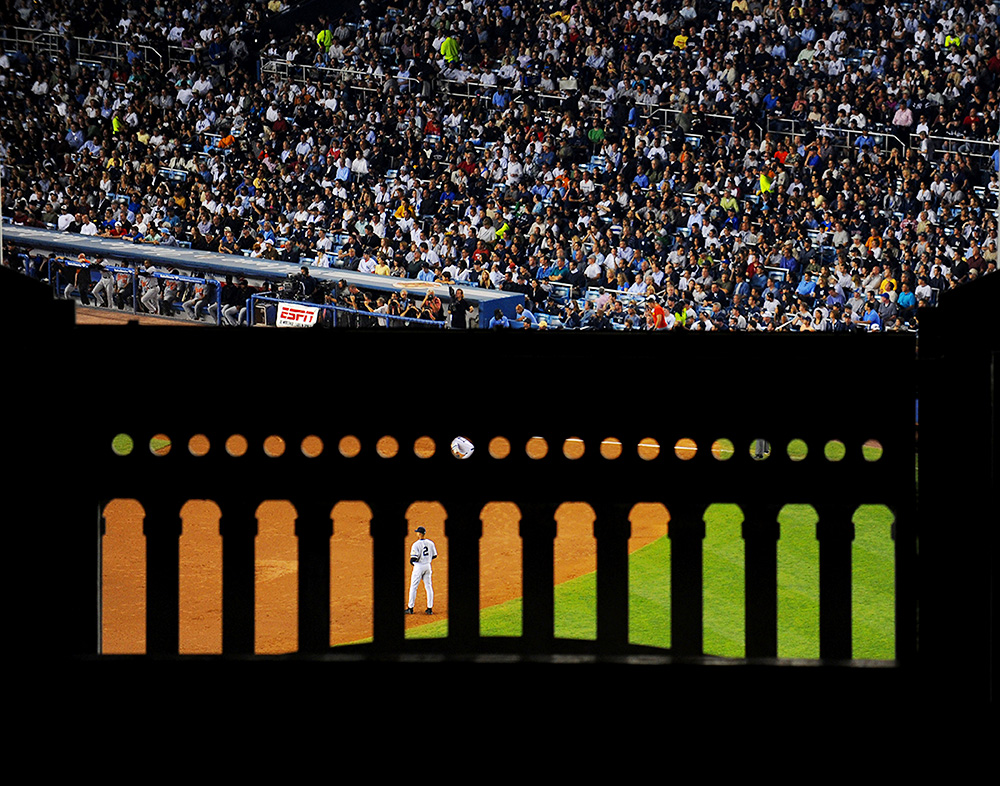 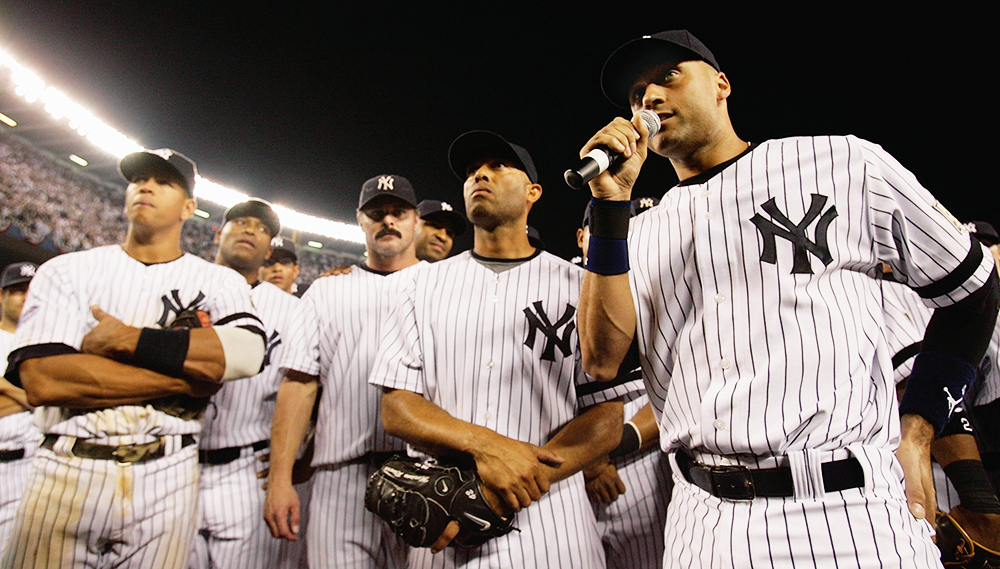 After beating Baltimore 7-3 in the final game at old Yankee Stadium, players walk to the mound to salute the fans -- and Jeter takes the microphone to say goodbye to The House that Ruth Built.

“There are a few things with the New York Yankees that never change. That's pride, tradition and, most of all, we have the greatest fans in the world.” -- Derek Jeter 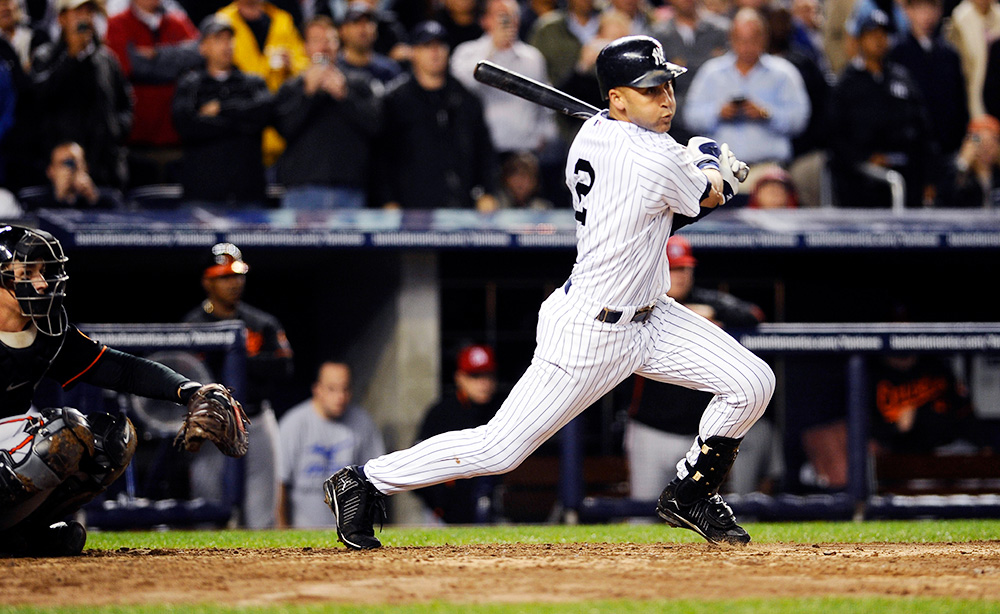 Jeter smacks a single off Orioles pitcher Chris Tillman in the third inning for career hit No. 2,722. The hit moves him past Yankees Hall of Famer Lou Gehrig for most in franchise history.

“There it is! For 72 years, Lou Gehrig has been the Yankees' all-time hits leader; now, it's Derek Jeter.” -- Michael Kay/YES 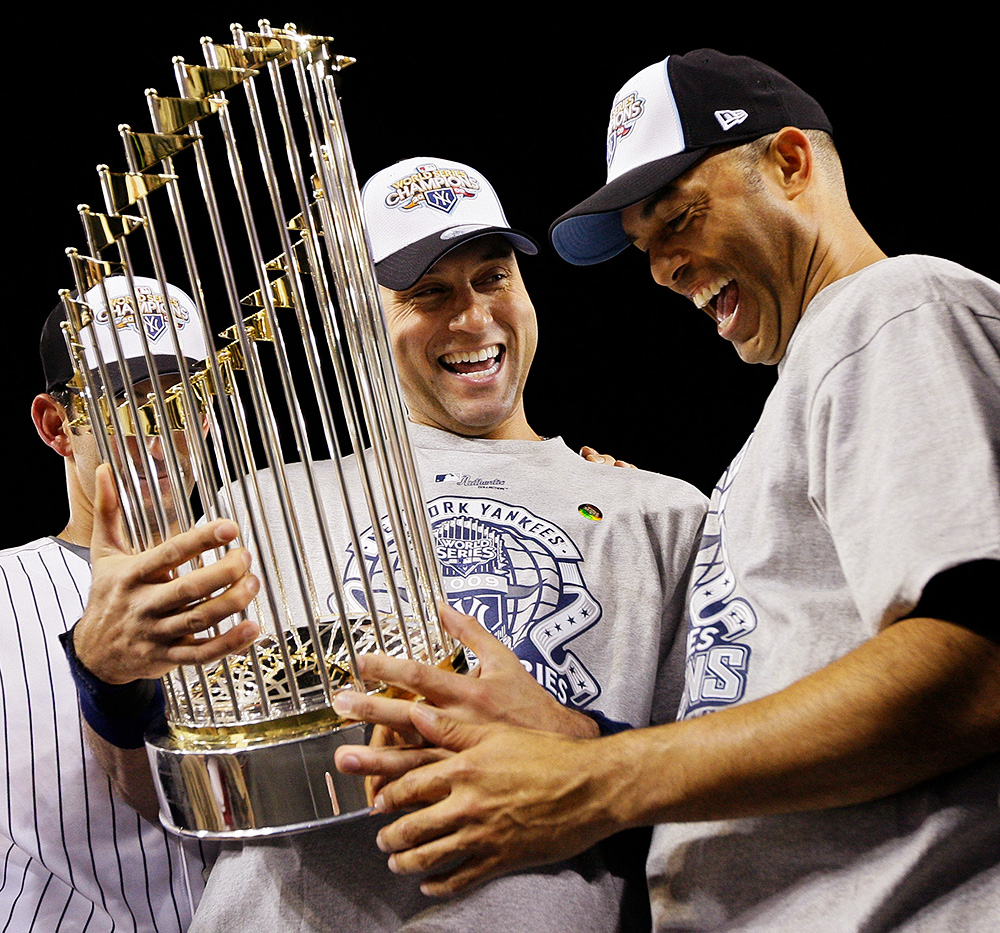 Jeter, along with Core Four teammate Mariano Rivera, right, becomes a five-time World Series champion as the Yankees clinch the Fall Classic against the Phillies. 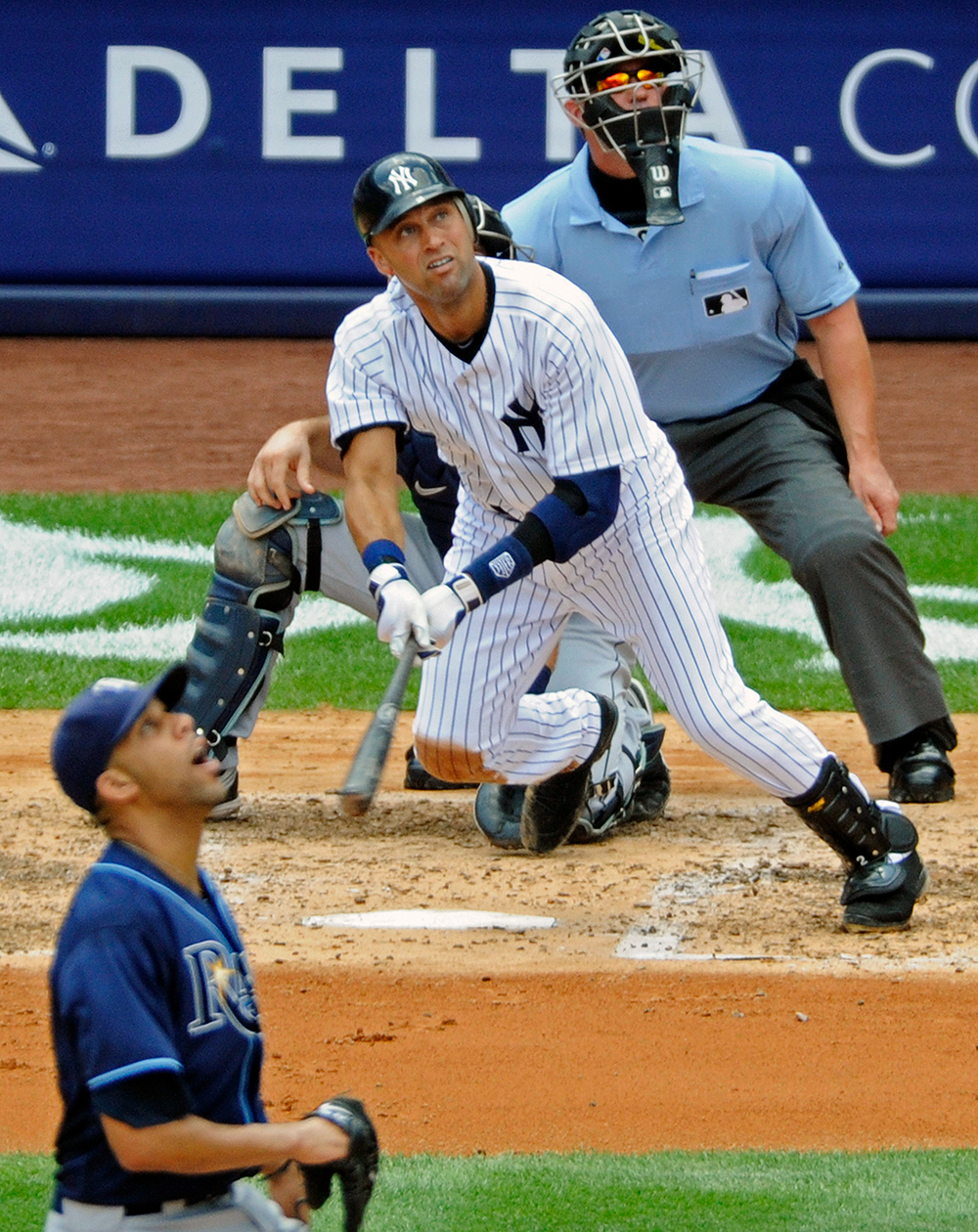 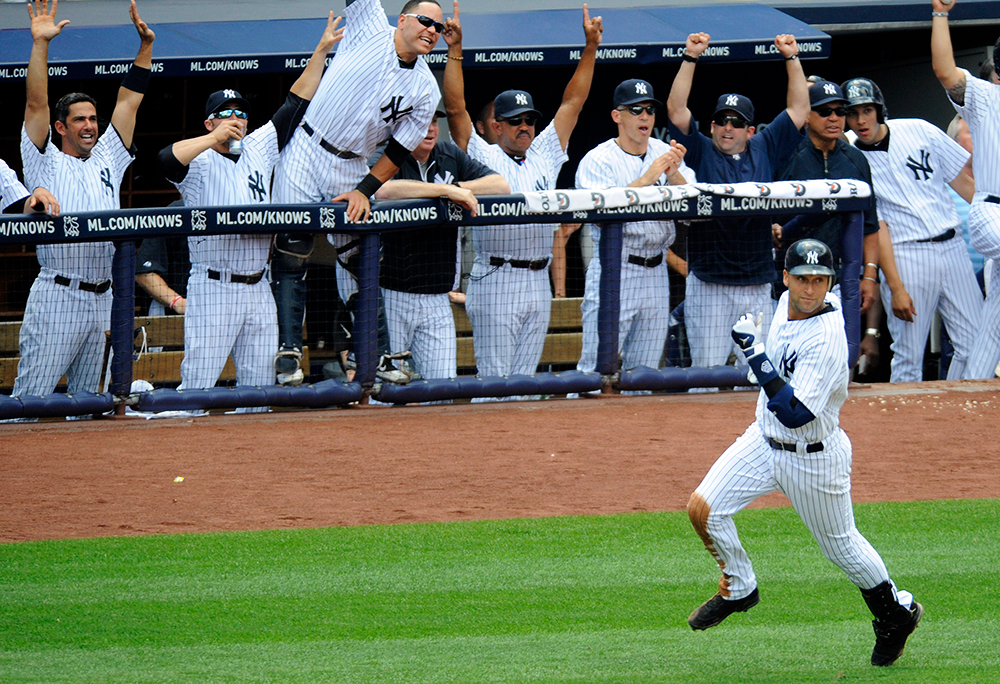 The first player to record 3,000 hits, all as a Yankee? Jeter, of course, and he does it in style, with a home run off Rays ace David Price. The Captain finishes the day 5-for-5 in a 5-4 win.

In his final home game as a Yankee, Jeter performs one more magic trick in the Bronx. His walk-off single drives home the winning run in a dramatic 6-5 victory over the Orioles.

“I mean, it's like something out of a movie.” -- Jon Sciambi/ESPN