An AFL season always brings with it a few surprises - like the Bulldogs winning the premiership from seventh, the 2017 Swans losing six on the trot, or Max Gawn shaving his truly magnificent beard. But some of the most surprising developments happen to the game itself, the style of play we see on the ground each week. It's still early in the 2017 season, but a few trends are emerging in the data - players are bouncing the ball less than ever before, kicking it more than any previous AFL season, and sharing the Sherrin around with their teammates more than in the past.

What ever happened to run-and-carry?

There are few greater sights in Australian football than a speedster finding some space, making a break for it down the wing and having a couple of bounces on the way to goal. But the sight is becoming rarer, and the bounce is in danger of becoming an endangered species. Last year, we saw an average of just 13.1 bounces per game, the lowest on record. And so far this year, the average number of bounces remains at this record low. 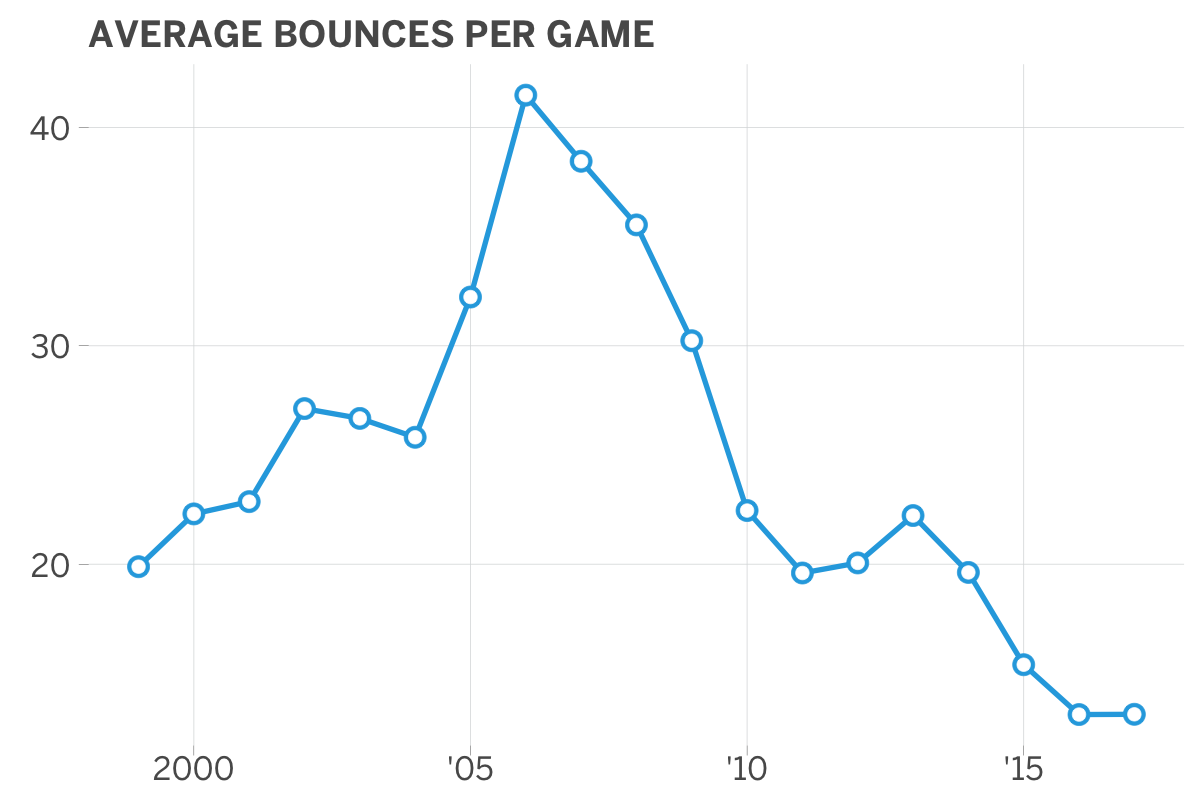 Not all teams have abandoned run, carry and bounce as a way to move forward. The Lions and Demons barely bounce the ball, averaging less than four per game so far this season, but the expansion teams are keeping run and carry alive. Both the Gold Coast and GWS are averaging more than 12 bounces per match. 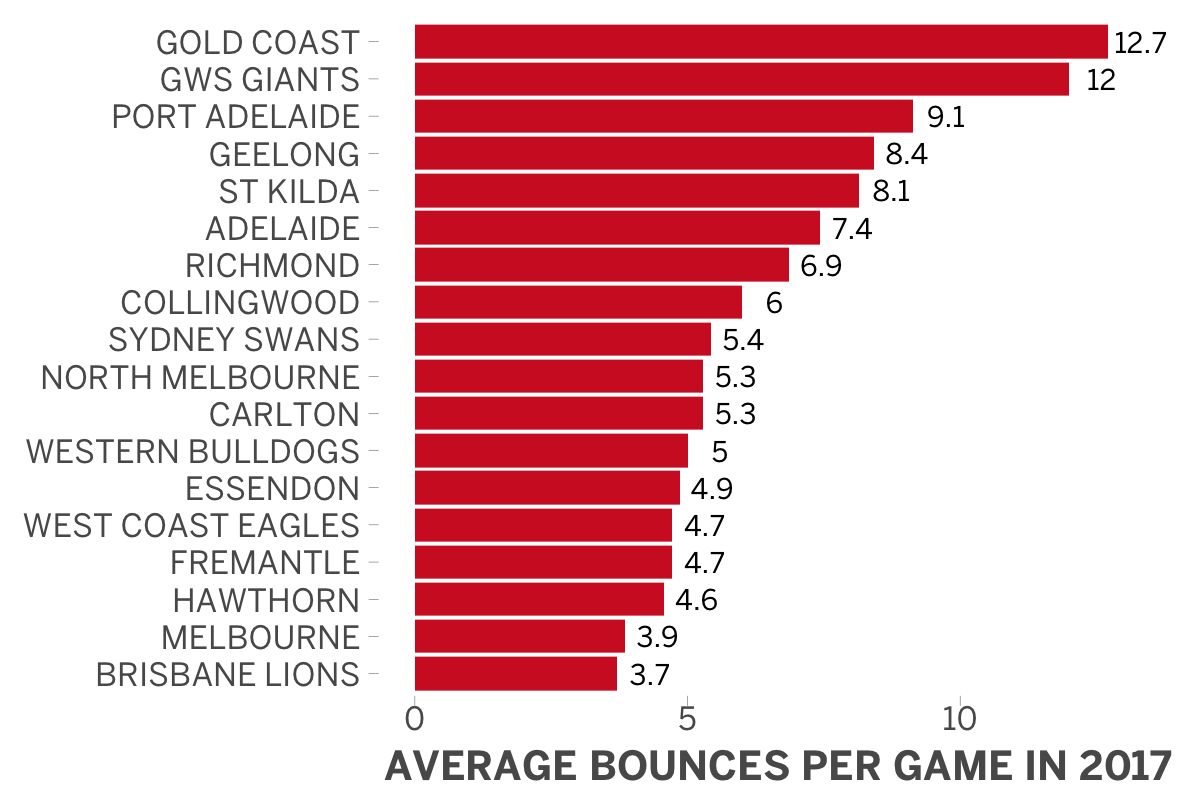 With bounces out of fashion, players aren't advancing the ball by running with it. Instead, they're disposing of it more than ever before. So far this year, we've seen an average of 385.2 disposals per game, the highest total on record - nearly 10 per game more than 2016's average. Kicks and handballs are both up; the average number of kicks per match is the highest in the AFL era, and the average handball count is second only to the handball-happy figures recorded in 2009. 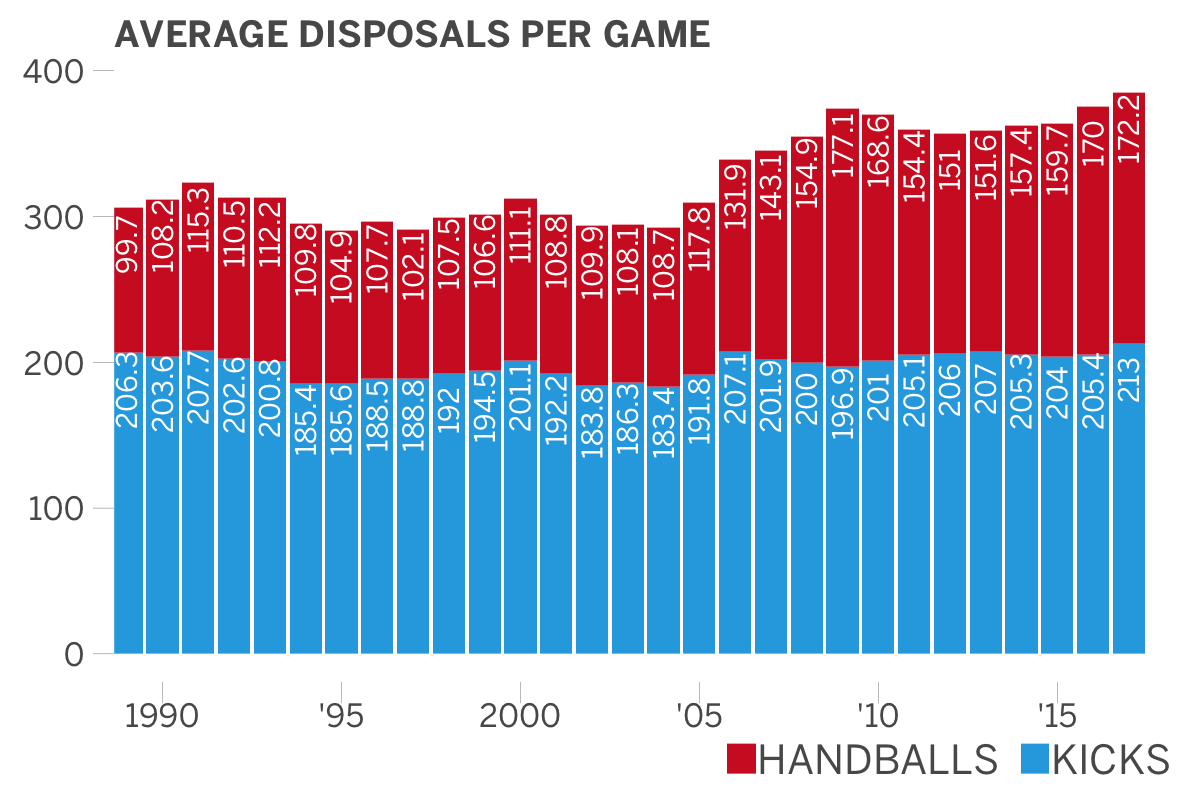 Kicks are at record levels - in the AFL era, at least - but the kick-to-handball ratio is still relatively modest by historical standards. The jump in average kicks per game has sent the league's kick/handball ratio up a tick, but it's still among the lowest on record. Teams are, on average, kicking the ball only 1.24 times for every handball. 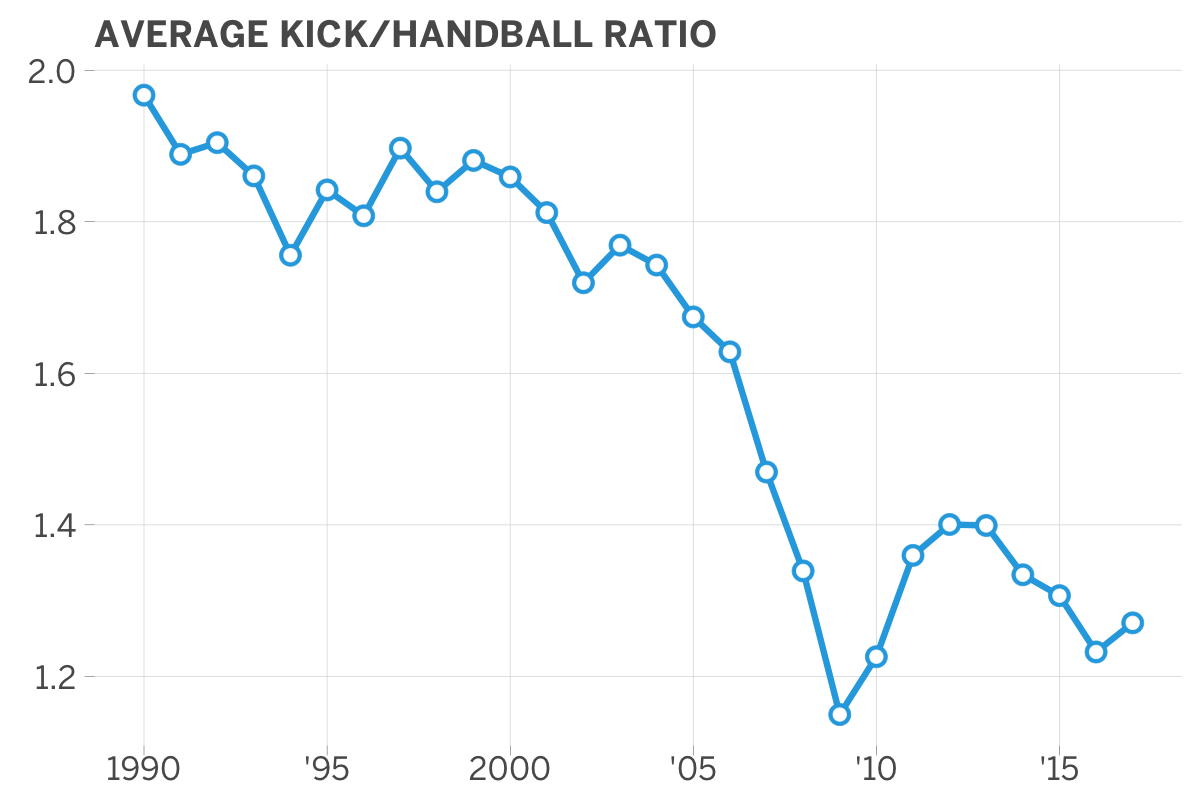 The kick/handball ratio is far from uniform across the league. The Blues are kicking the ball more than 1.8 times for every handball, by far the biggest ratio in the league and well up on their 2016 average. Geelong have gone the other way - they're handballing as often as they're kicking the ball in 2017. The only teams to ever have a lower average kick/handball ratio than the 2017 Cats are the 2009 Crows and 2009 Cats. 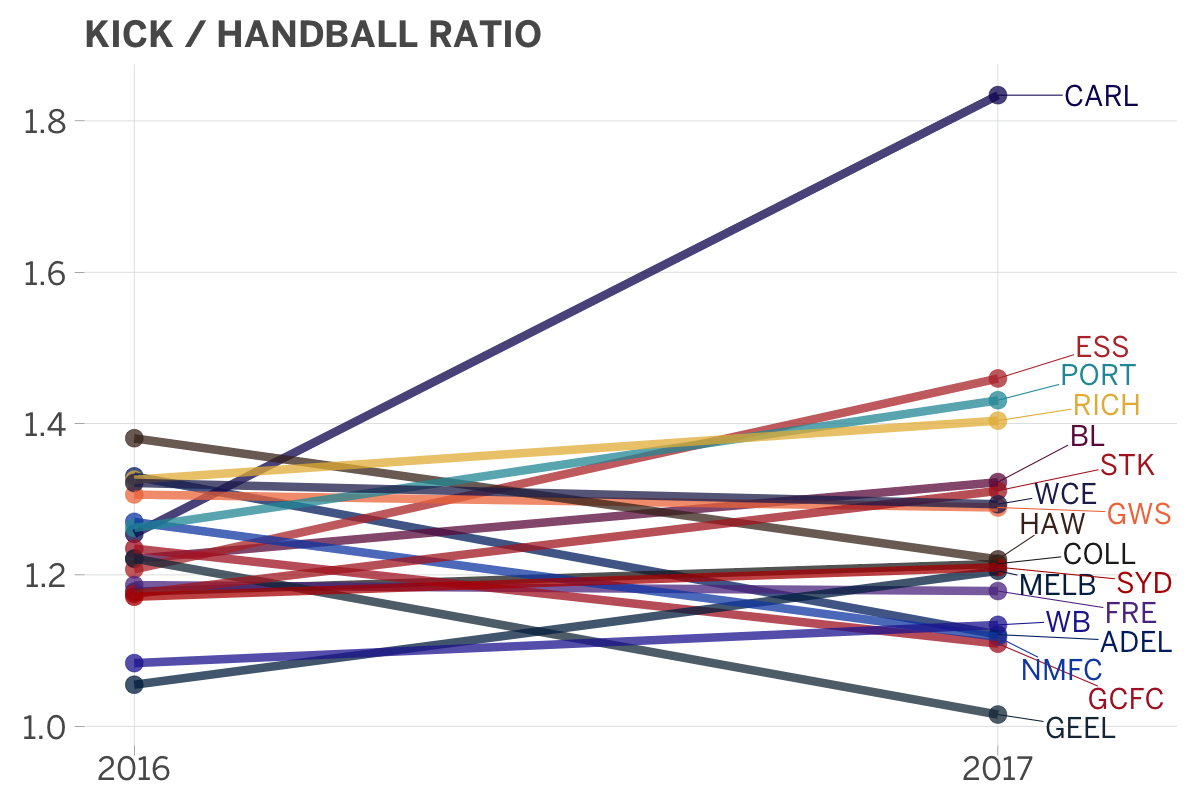 Average disposals per game are at a record high, but those extra kicks and handballs aren't all being racked up by superstar midfielders. Instead, teams are sharing around their disposals more equally than ever before. We measure inequality within teams using the Gini coefficient - if one player was responsible for all of his team's disposals, that team would have a Gini of 100, while if every player on the team had the same number of disposals, the Gini would be 0. The average Gini coefficient across teams for both disposals is at a record low, which tells us that teams are sharing the ball around much more than in the past. The same trend is there if we look at Fantasy points as well - teams have a more equal spread of contributors than ever before. 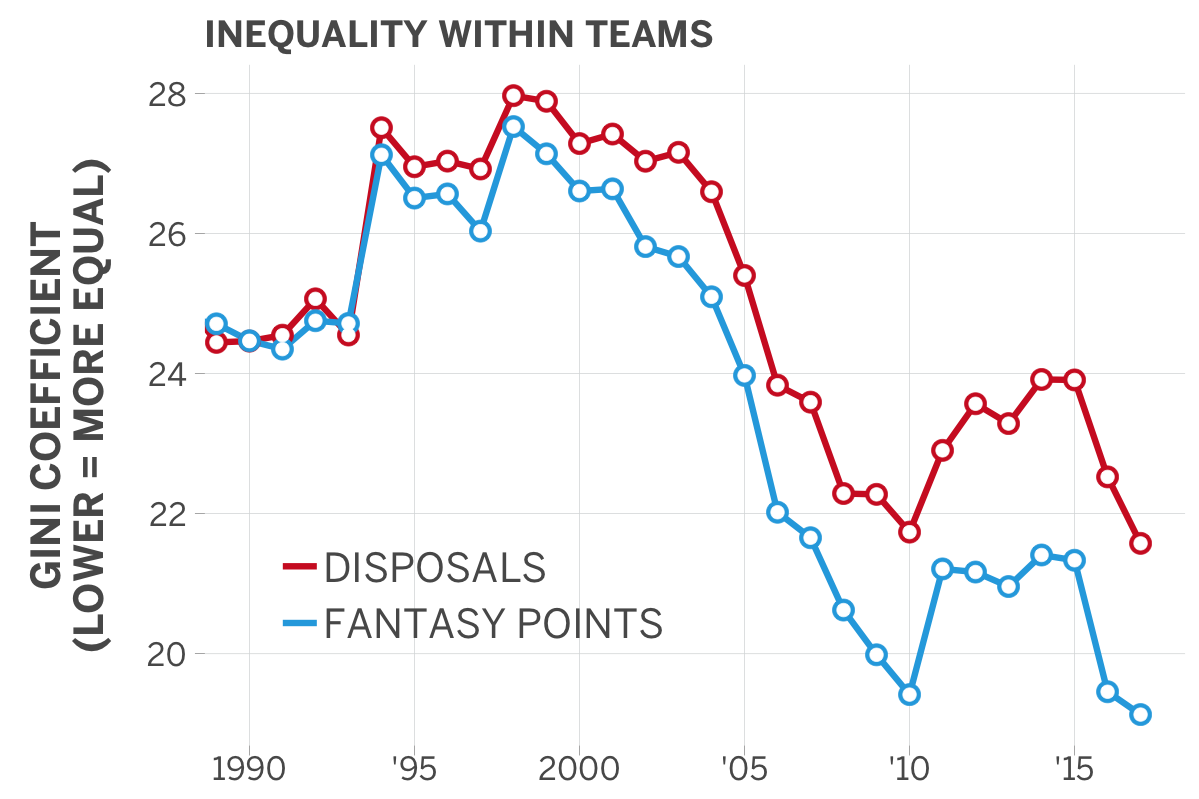 DATA: AFLTABLES.COM. THE GINIS WERE CALCULATED FOR EACH TEAM IN EACH GAME, AND THE AVERAGE OF THESE ACROSS THE WHOLE SEASON WAS THEN CALCULATED.

Goals, too, are being spread around much more than in the recent past. So far this year, there has been an average of 17 goalkickers per game across both teams. That's second only to the 2000 season for the average number of goalkickers in a match. This might be a quirk of the comparatively small sample, with only 63 games having been played so far this year, but it's an interesting trend to keep an eye on. 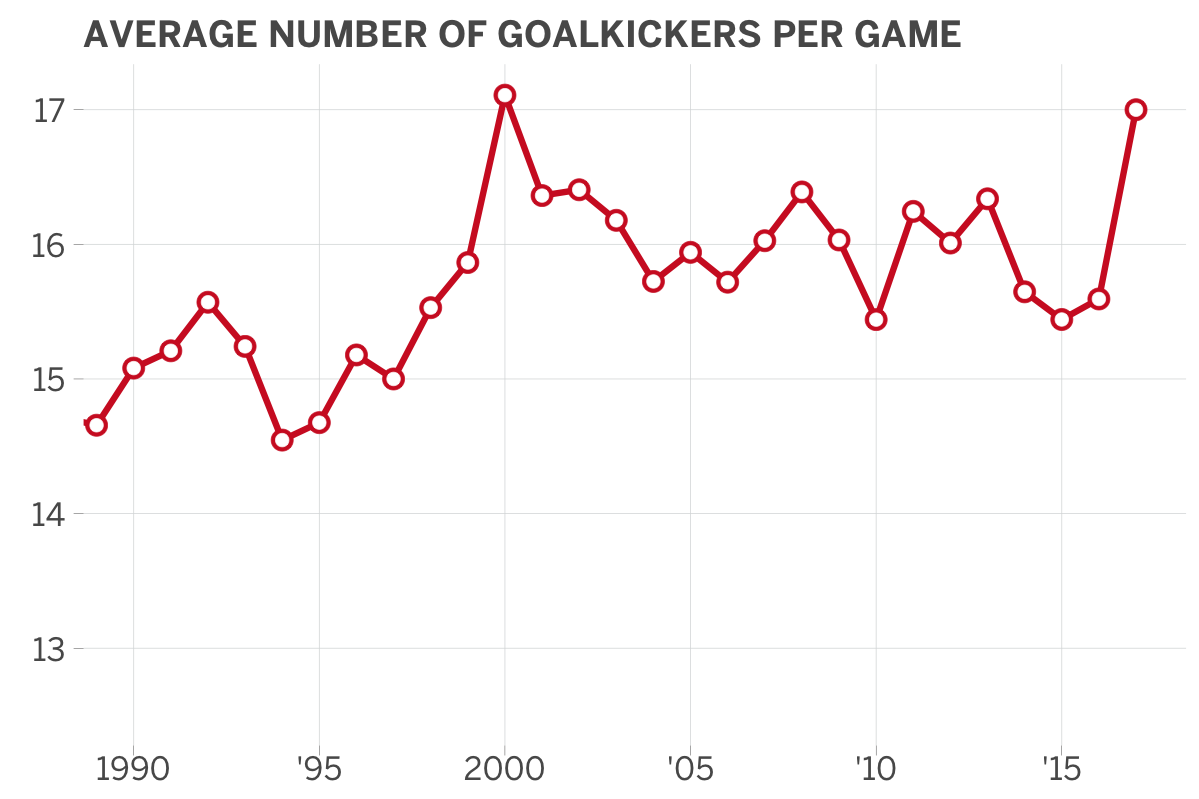 The average number of goalkickers is up from last year, as is the number of goals. Average game scores bottomed out at an AFL-era low of 174 points per contest in 2015, sparking action from the league in the form of the reduced interchange cap and tighter deliberate out of bounds interpretation. The league's intervention seemed to work - average game scores rose by more than two goals last year, to 187.1 points. This year has seen another modest rise - to 188.7 - but that's too small and it's too early to tell if the rise in scoring is going to be with us.

AFL footy's always changing, but we don't always notice the trends as they're happening. A dive into the data can help us get a sense of how this year's footy differs to the past. So far this season, we're seeing less bouncing, more kicking, and more equality among teams than we have in the past.