Nashville is home to the Grand Ole Opry and the Country Music Hall of Fame, but these days fans in Music City are paying more attention to the action on center ice than at center stage.

The Predators -- who are facing off against the defending champion Pittsburgh Penguins in Nashville's first-ever Stanley Cup Final appearance -- play in the heart of the city's famed honky-tonk district, where hometown fans celebrated the team's first show on the NHL's grandest stage in signature country style.

The party began on the plaza outside Bridgestone Arena well before Game 1 and reached a fever pitch as Nashville hosted Game 3. An estimated 50,000 fans turned out to cheer on their team on Lower Broadway, where folks set up chairs in the streets and sidewalks to watch the action on big screens outside the arena. We captured some of the excitement as the fans turned out in full force -- and vintage Nashville style. 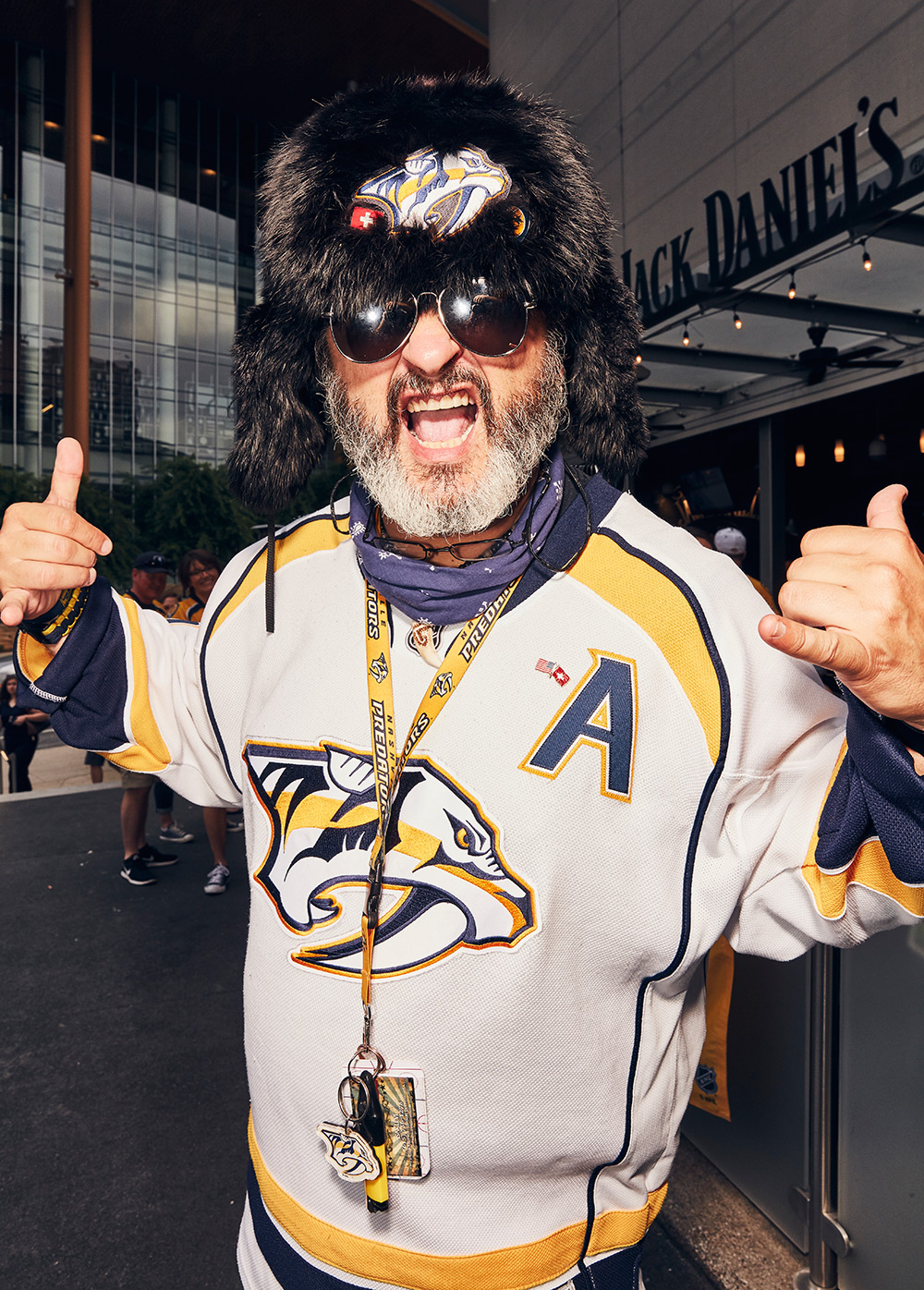 "The Animal" -- a member of the Fur Hat Authority, a group of Predators fans who sport pelts to games -- shows his pride before Game 1 in downtown Nashville. "Our destiny, our time, our moment!" he says. The group started with three members a few years ago and has grown to more than 100. 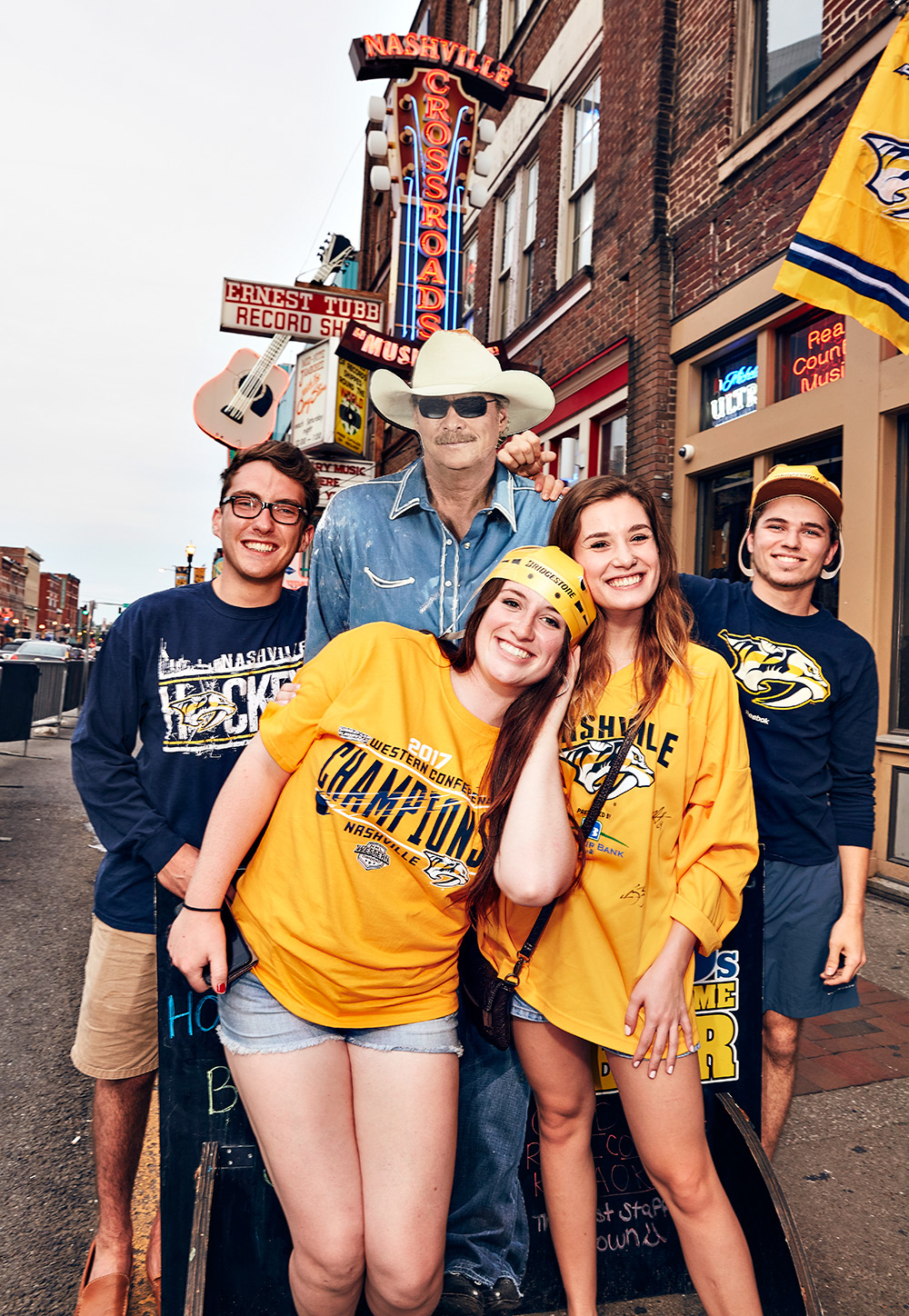 Fans pose with a cardboard cutout of country star Alan Jackson -- who performed a free concert for fans before Game 3 on Saturday -- outside of the iconic Ernest Tubb Record Shop, a mainstay on Lower Broadway since 1947. 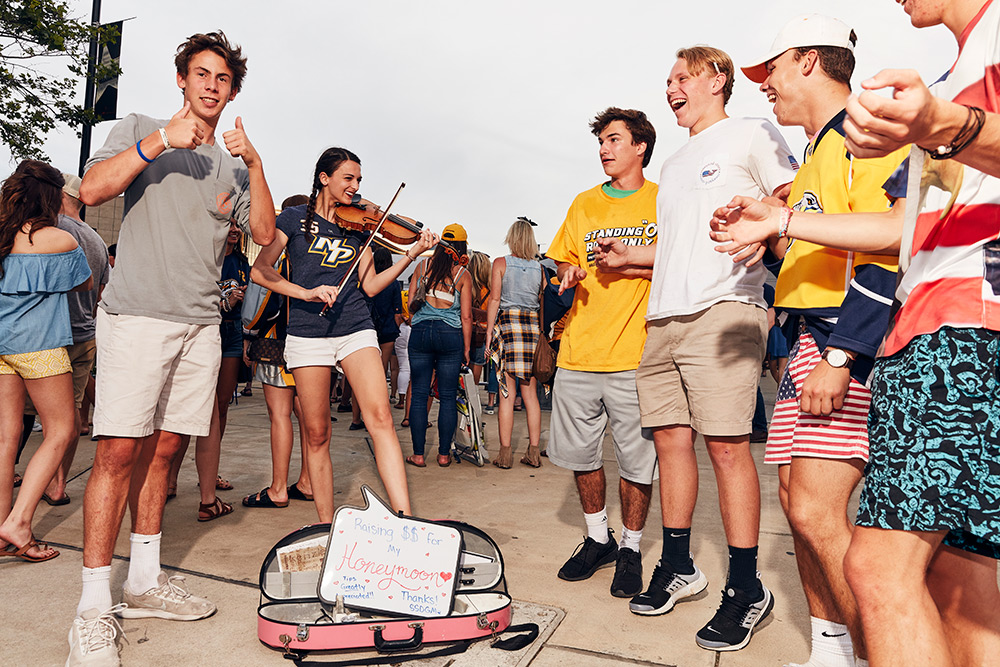 A bride-to-be serenades fans with a violin to raise money for her upcoming honeymoon. 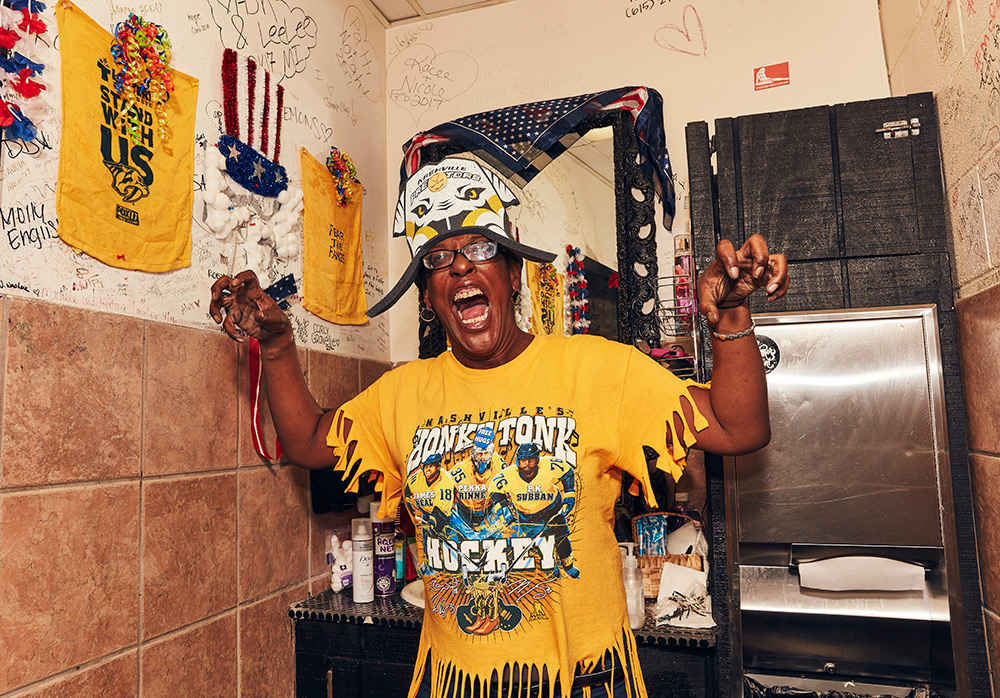 Mega-fan Katrina Thompson, a bathroom attendant at Rippy's on Broadway, bares her Predators pride even at work. 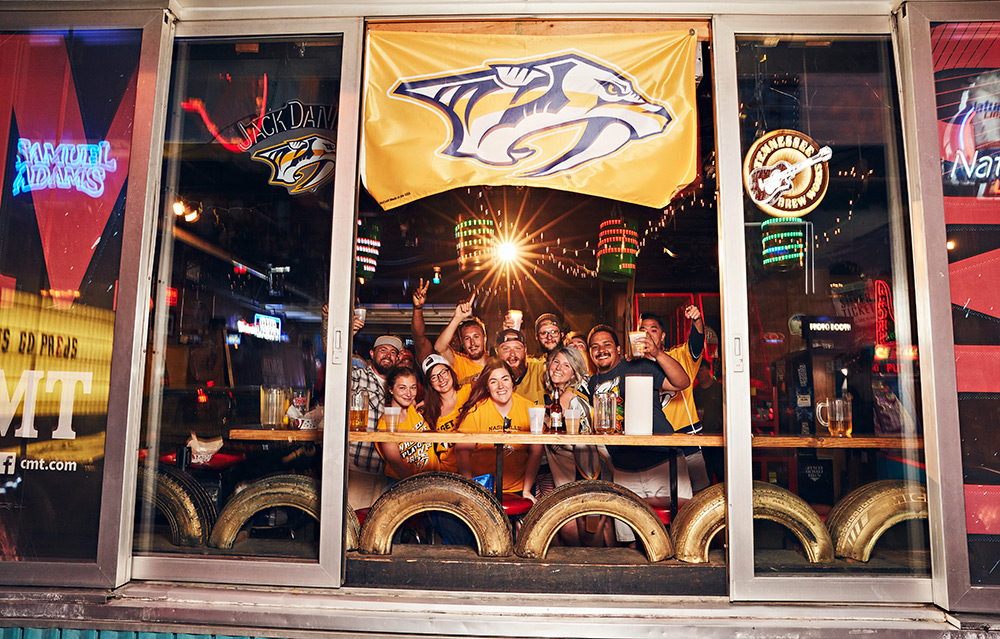 Game 1 of the finals was played in Pittsburgh, but Paradise Park on Broadway was the place to be in Nashville. Venues all along the iconic honk-tonk strip were packed with fans who came to see hockey, not live music. 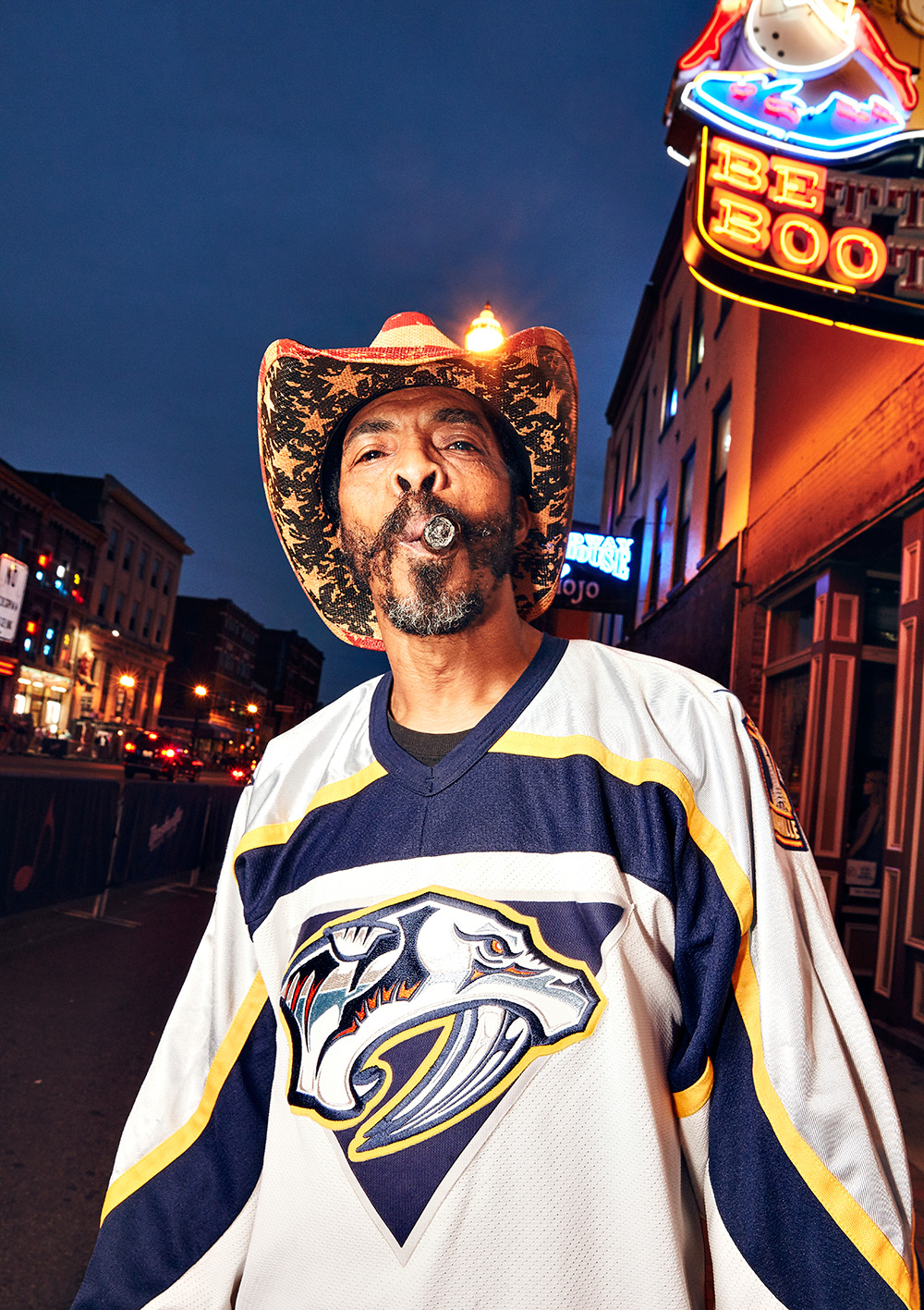 Hollywood, a regular at the various Nashville honky-tonks, enjoys a cigar during Game 1. 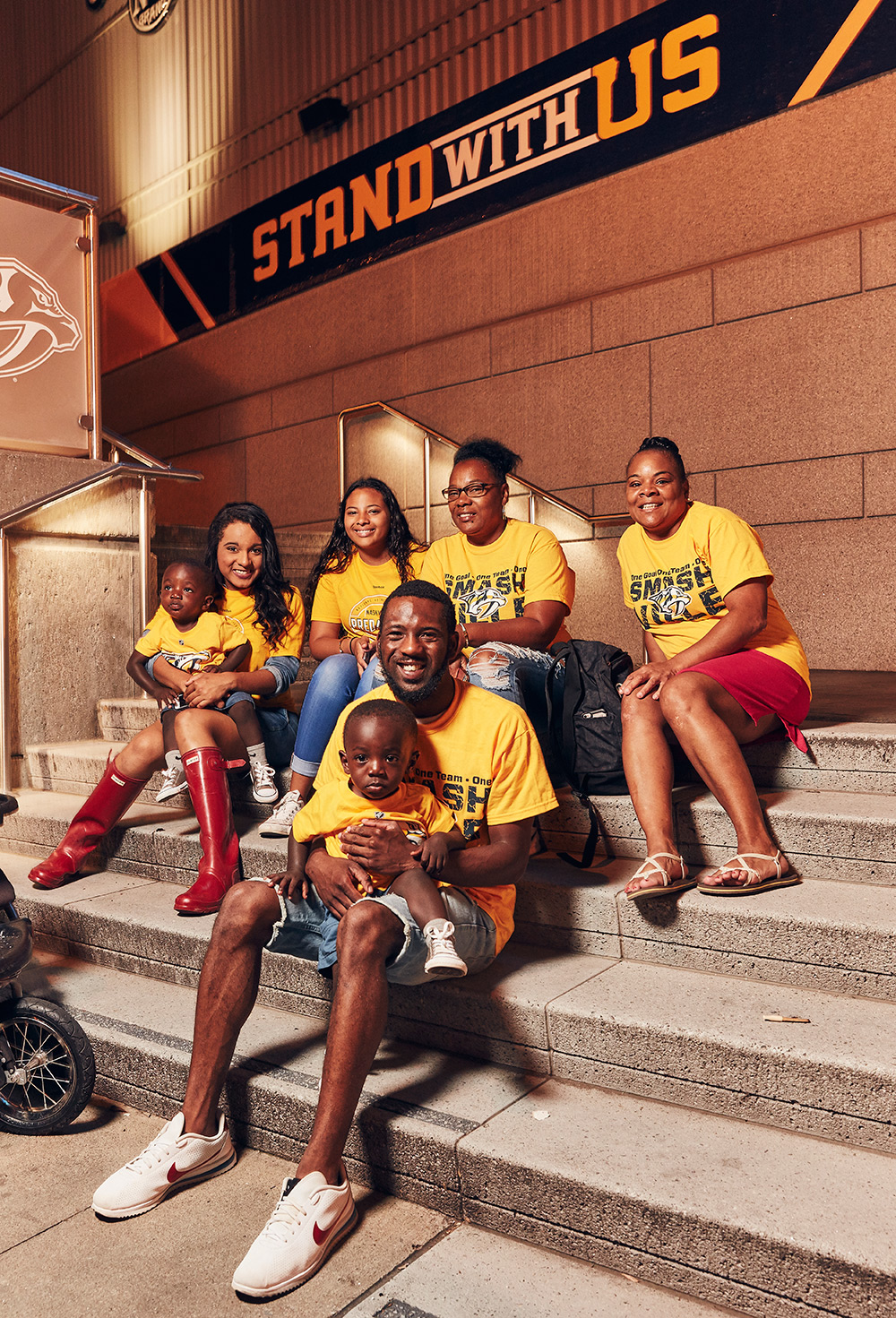 Several generations of the Ramerez family show their Smashville spirit outside of Bridgestone Arena. 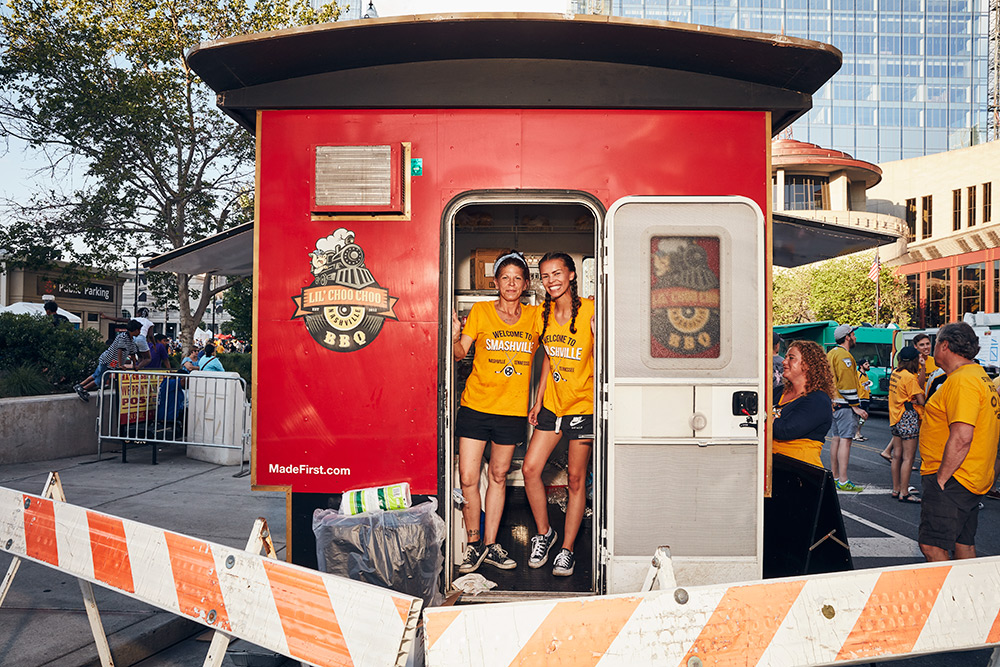 Employees of the Lil' Choo Choo truck served up Predators pride -- along with fresh BBQ -- to hundreds of hungry fans in front of the Country Music Hall of Fame. 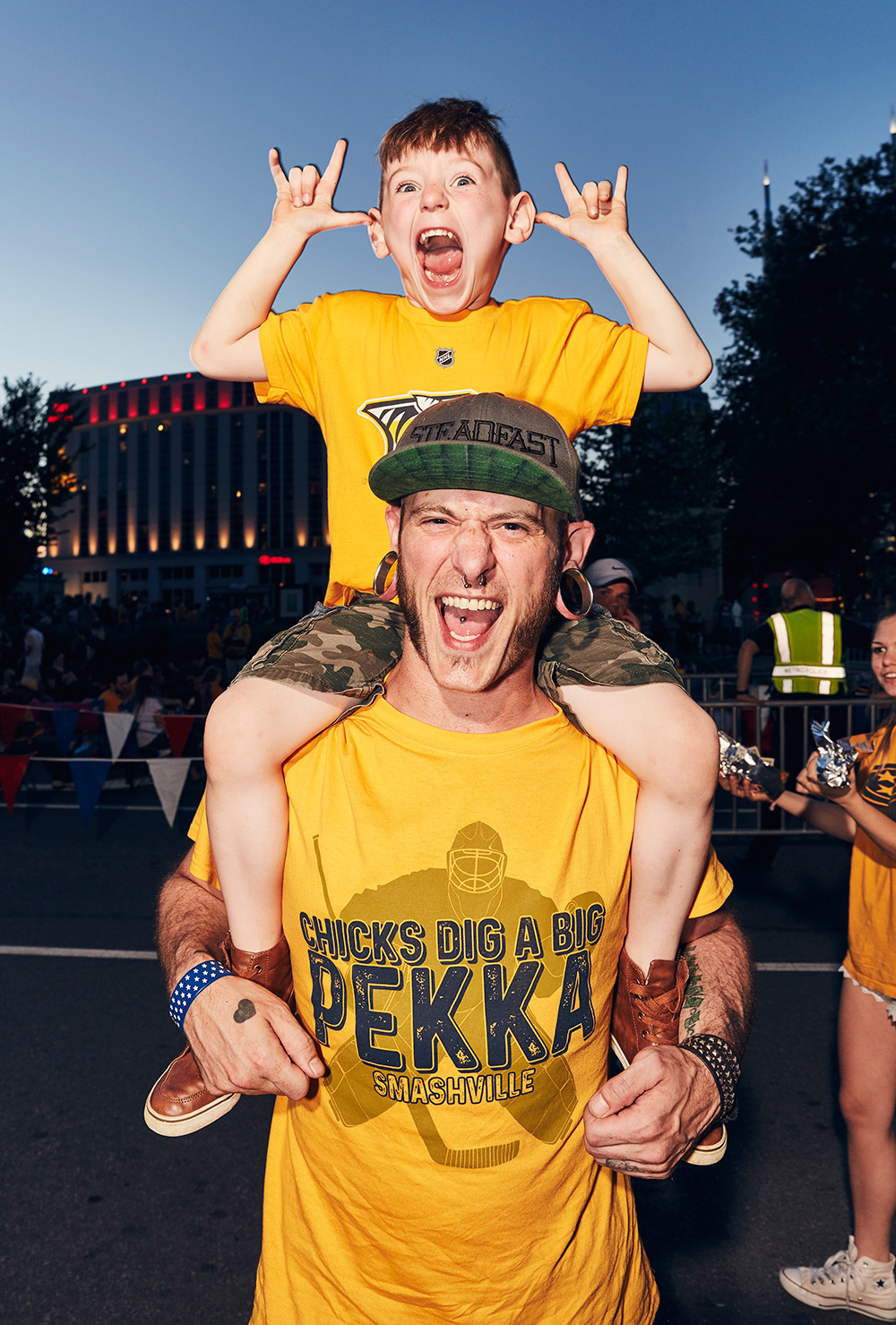 "I've been a fan since 1998," says Jamie Banks, as his son, Skyler, flashes Predators fangs. "My mom brought me to the inaugural game here." 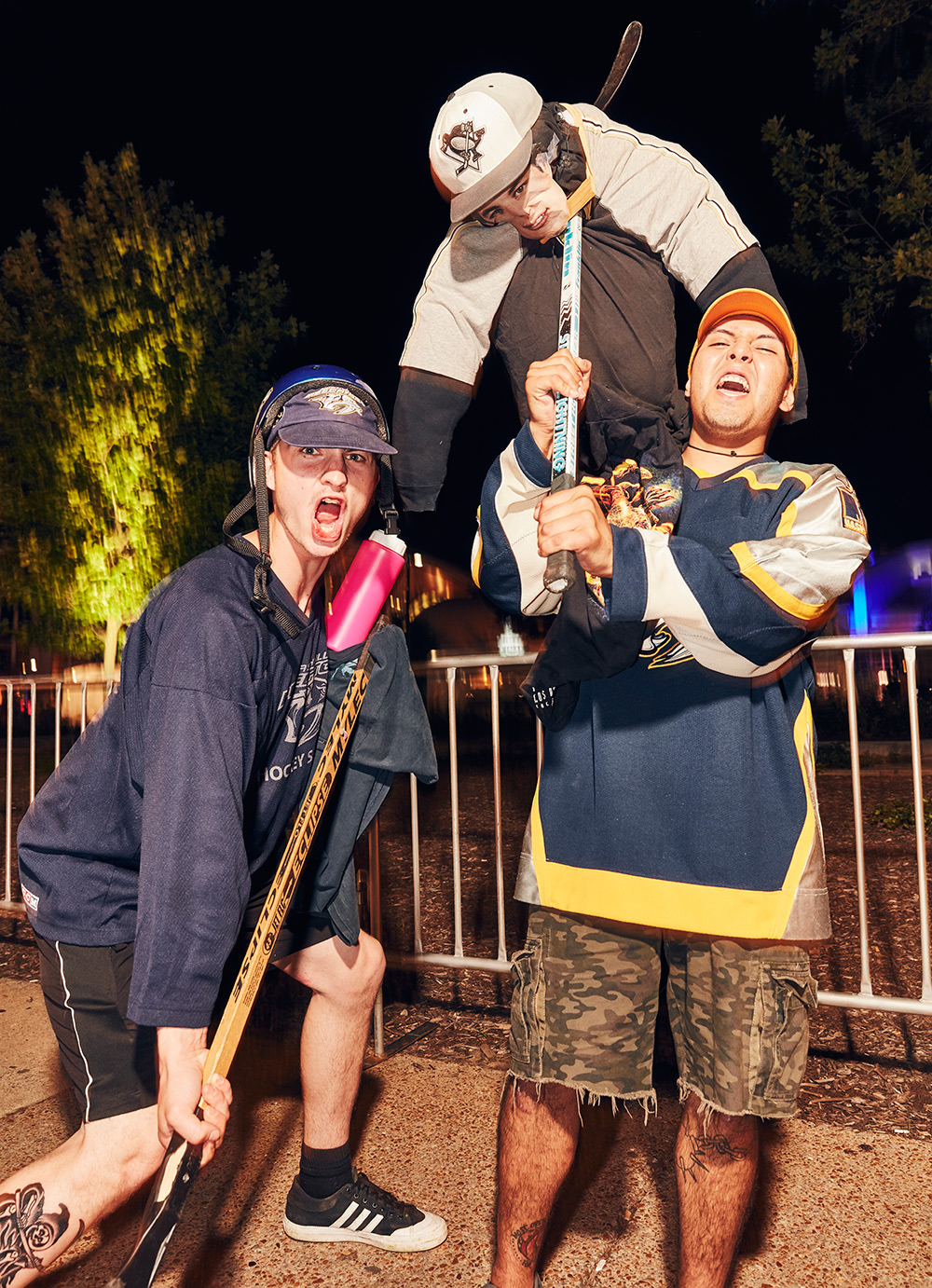 The Penguins fared better in Game 2 -- which Pittsburgh won 4-1 to take a 2-0 series lead -- than did this dummy (who bore an erie likeness to a certain Pens captain) at a Game 2 viewing party. 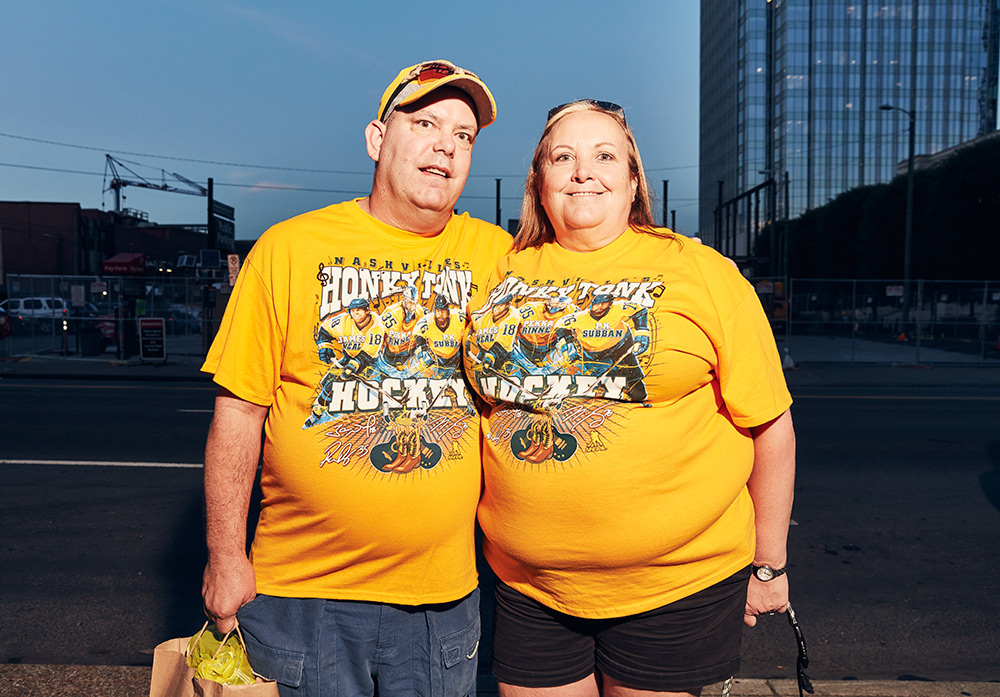 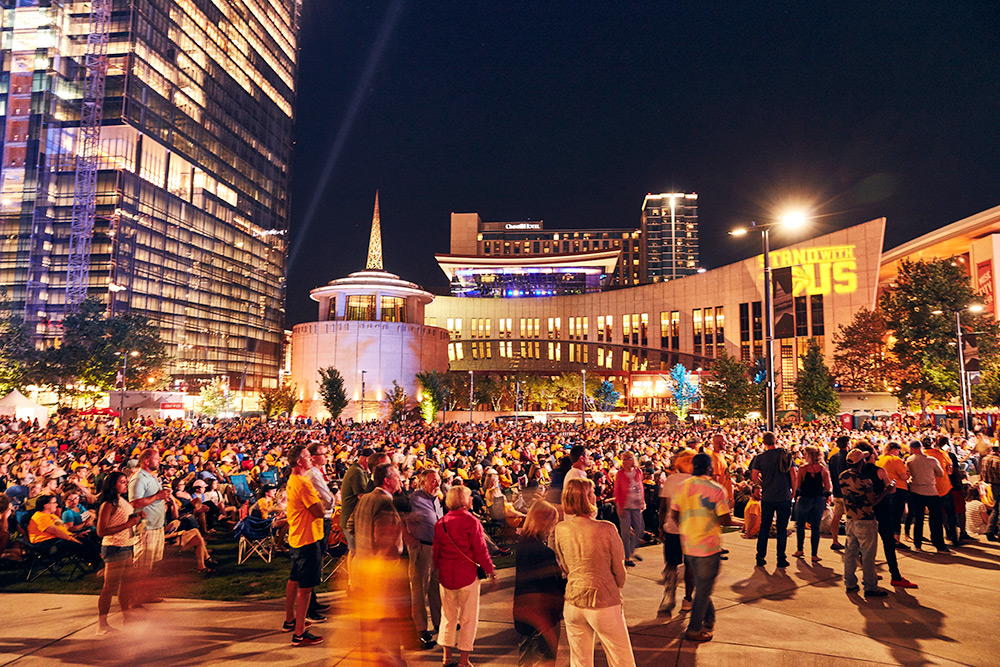 A reported 50,000 fans filled the area around Bridgestone Arena before Game 3. 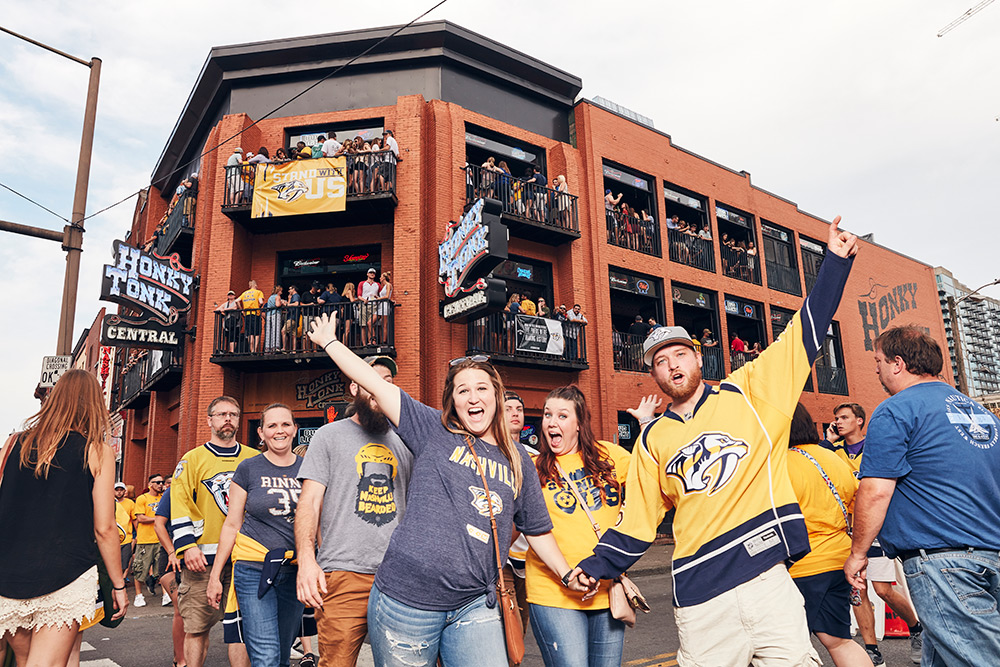 The corner in front of one of Nashville's most iconic honky-tonks was hopping before Game 3. "Anybody want the Preds to win tonight?" a bandleader asked at Honky Tonk Central. "I tell you what, the Preds win tonight and Nashville's gonna go crazy." 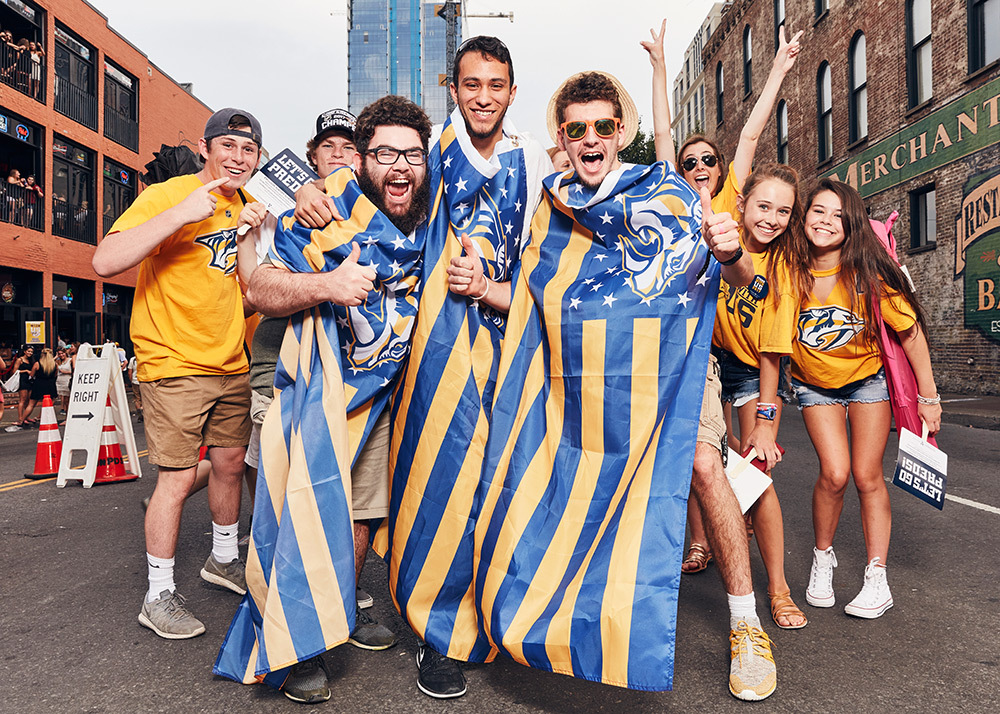 Even with their team down 0-2, Stefano Busico, Joseph Duprey and Drake Hawkins of Clarksville, Tenn., think positive before Game 3. "Preds gonna take it!" Buscio proclaims. 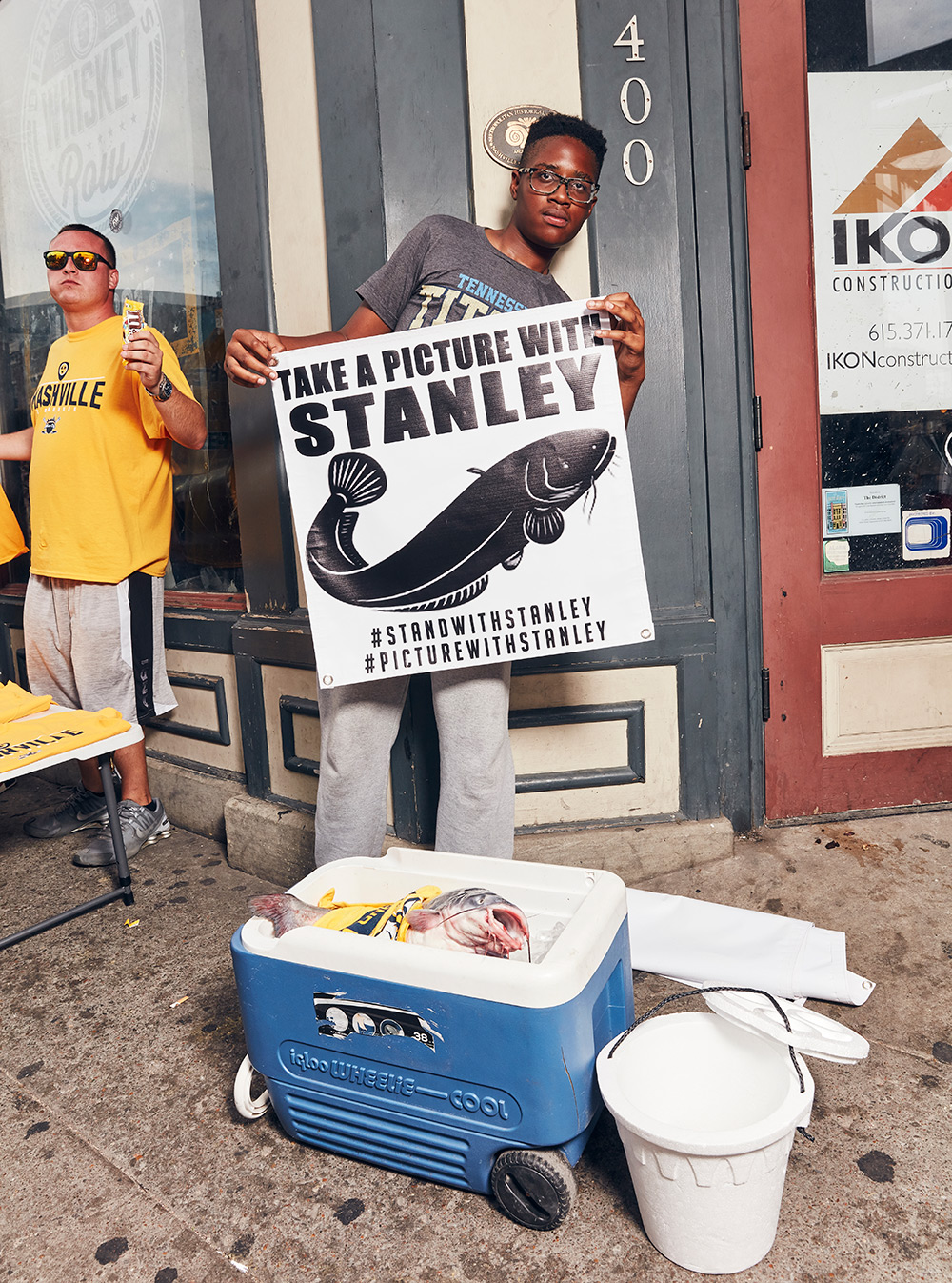 Throwing catfish onto the ice has been a tradition at Predators games for more than 20 years.
Brandon Simmons, an enterprising Nashvillian, stands on Broadway with his aptly-named catfish, "Stanley," and offers photos to fellow fans. 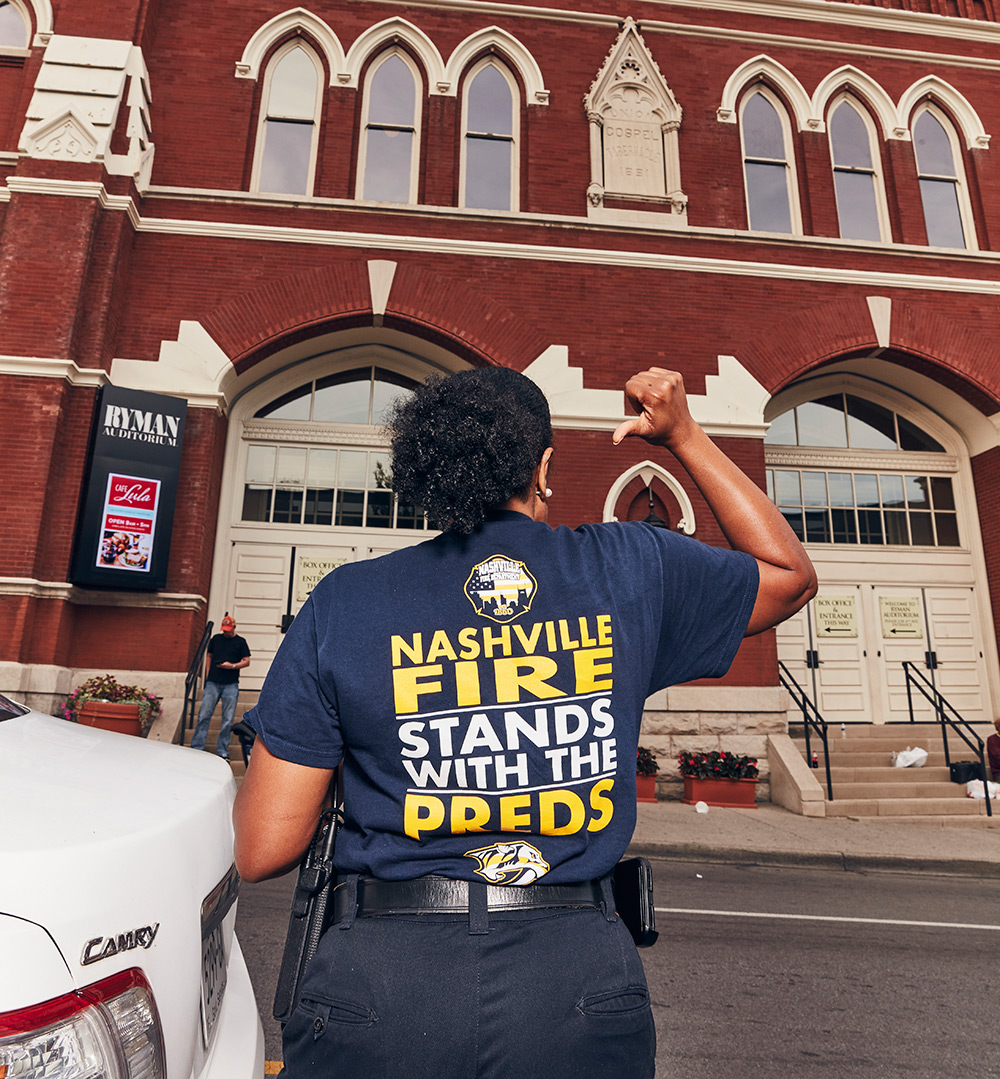 Evante Hall, an inspector for the Nashville Fire Department, gets, well, fired up outside of Ryman Auditorium. 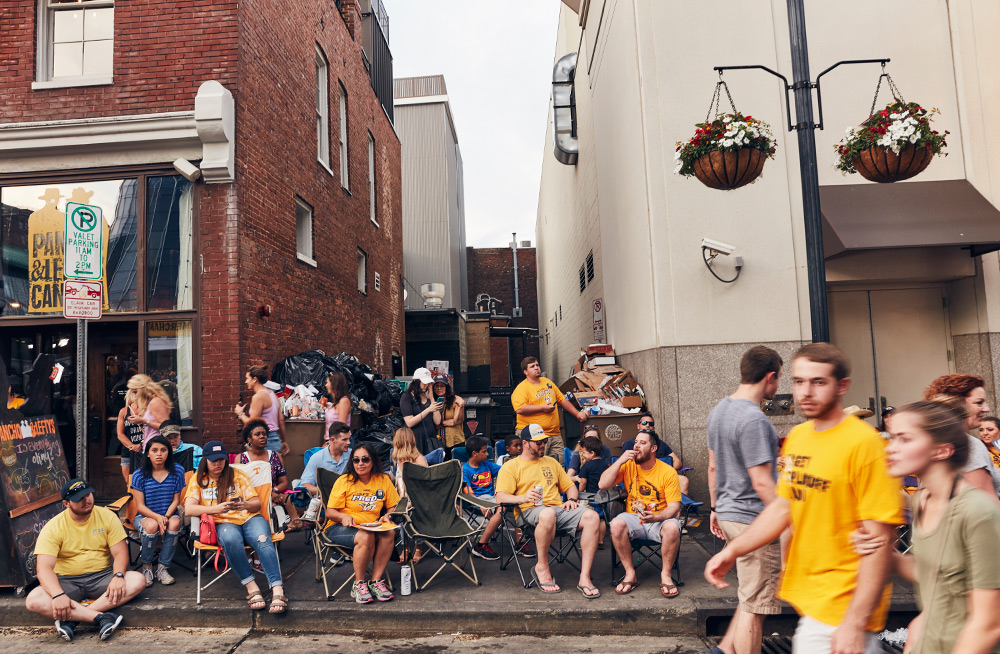 A total of 17,283 people filled the Bridgestone Arena for Game 3. Countless more watched outside, where fans set up shop on the sidewalk across the street and watched the live broadcast on a big screen. 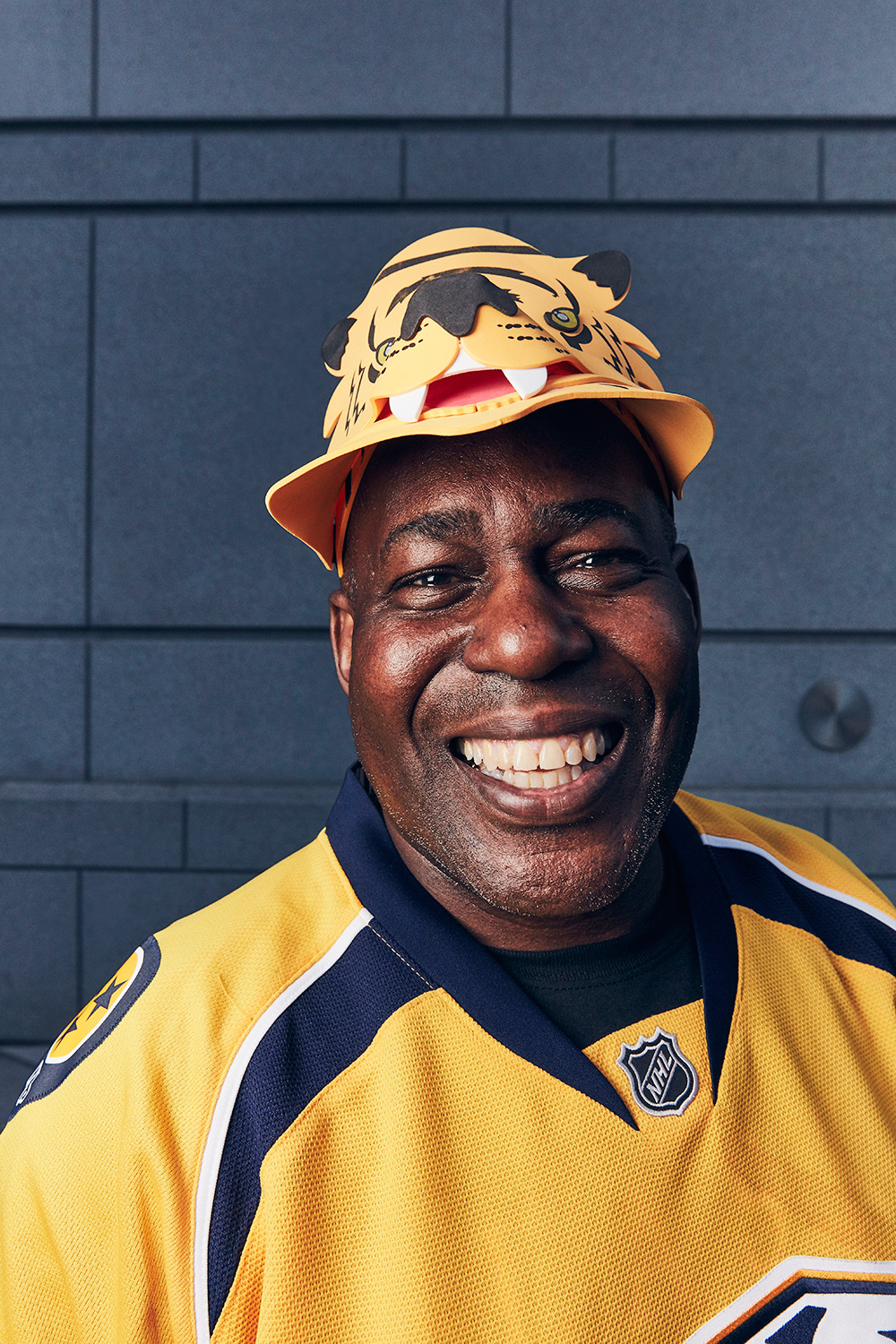 Nashville native Felix Chambers, 55, came all the way from Anchorage, Alaska, for Game 3. After the Predators prevail 5-1 to restore some balance to the series, he is all smiles. 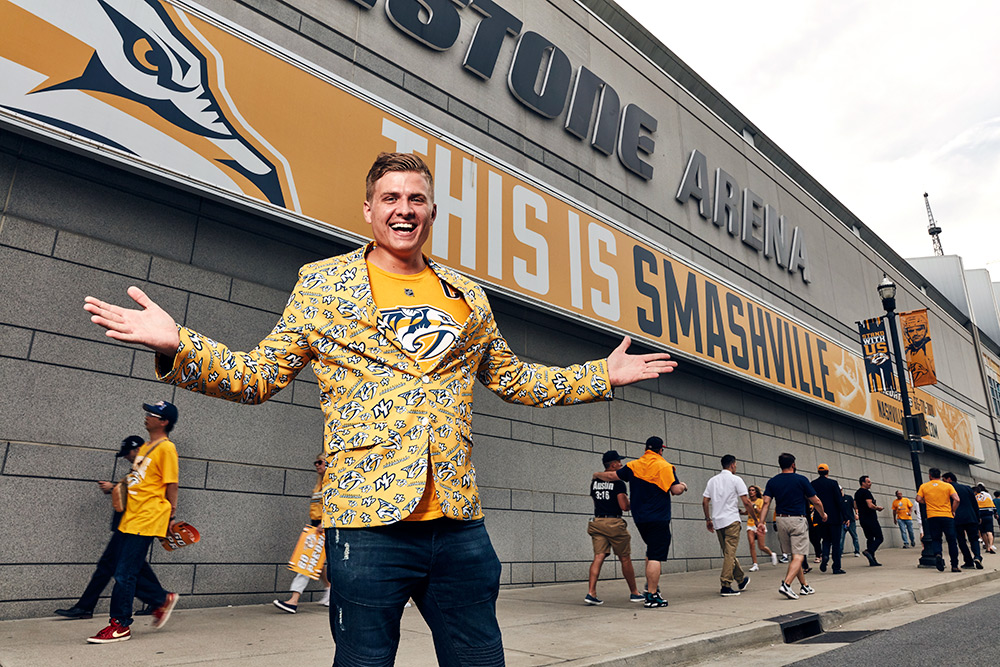 As his Predators-themed sport coat shows, Colin Cooper wears his Preds pride on his sleeves. "Let's win these two at home and the rest will take care of itself," he proclaims. 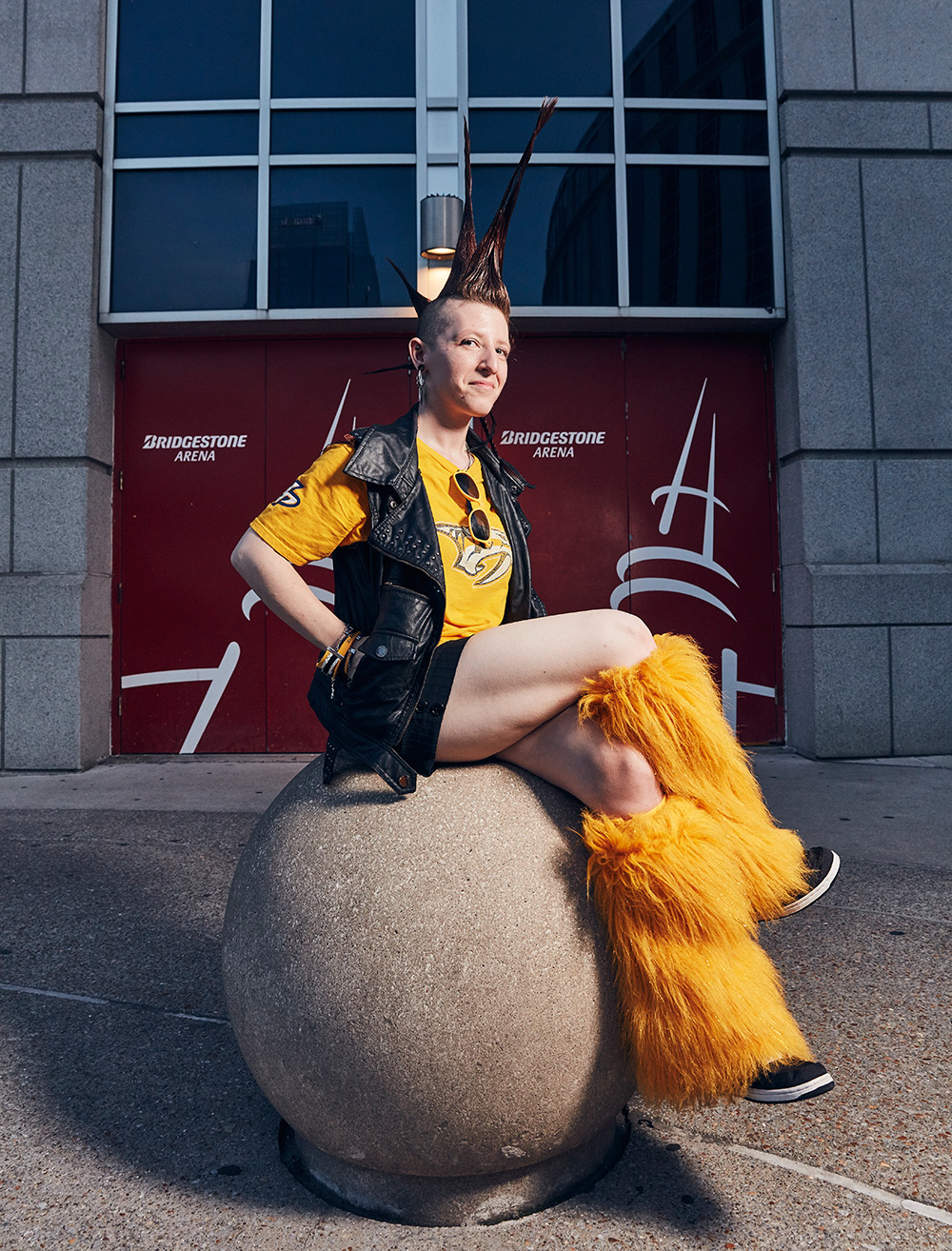 New Jersey native and newly-converted Nashville fan Sarah Boone makes a sharp fashion statement in front of Bridgestone Arena -- from her Mohawk right down to her Predators-themed leg warmers. 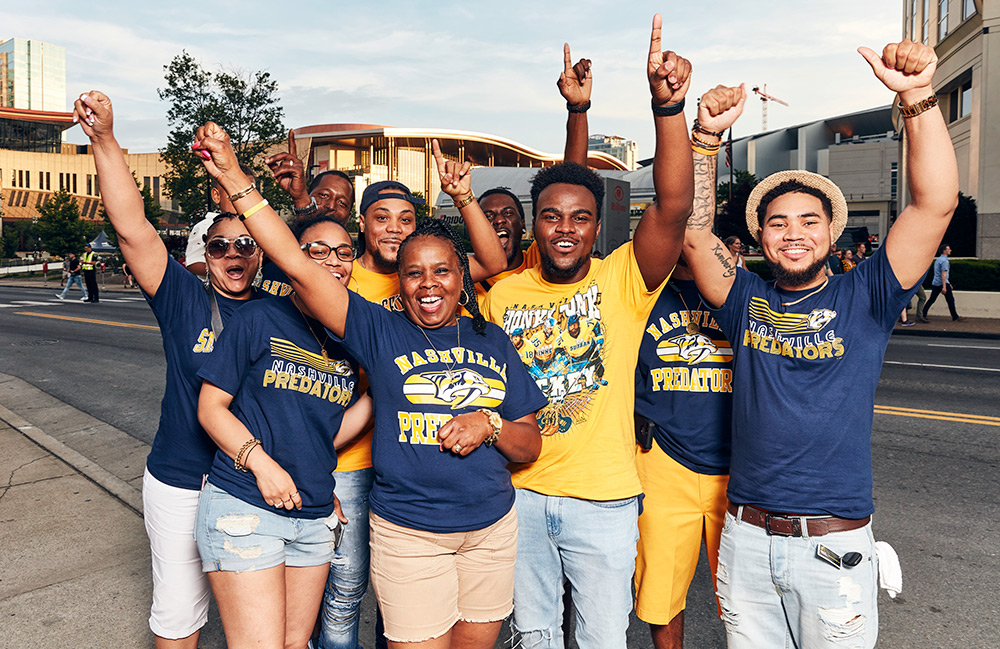 The Bass family feels optimistic about their favorite team's chances as they head downtown for Game 3. "We're gonna win tonight!" they exclaim in unison. 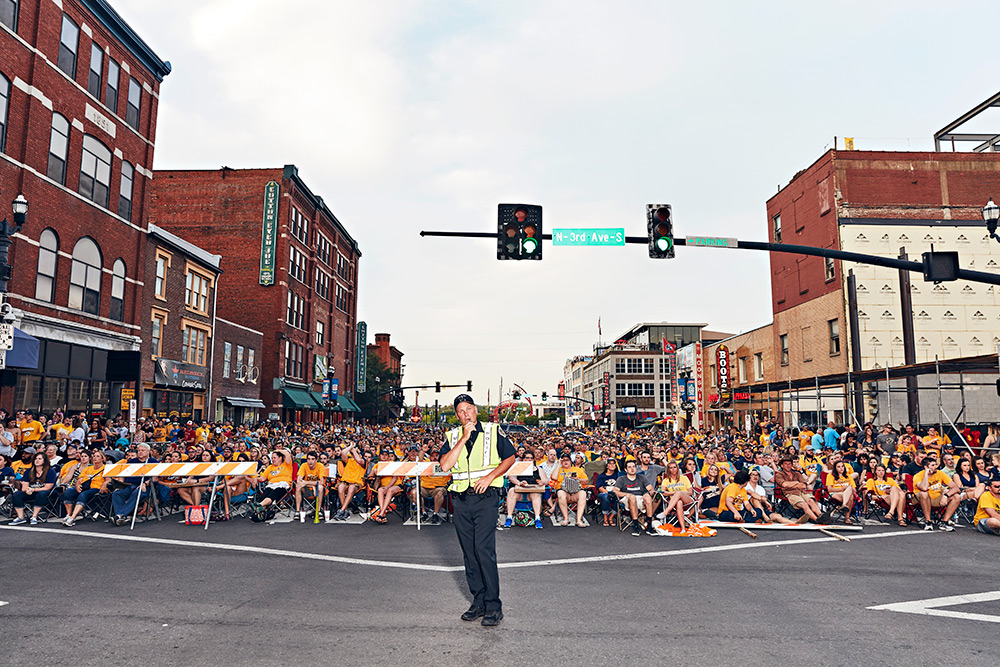 With several streets downtown closed off to traffic so fans can watch the game en masse, the strip is packed with Predators fans nestled shoulder to shoulder in a sprawling, seemingly endless sea of gold.