For all the players who get a shot to make an NFL roster every year, there are countless others stuck on the outside, consumed by getting one more chance to play in the league. That's why Brian Woods dreamed up The Spring League, an independent organization that held its inaugural season during a three-week period in April at the Greenbrier Sports Performance Center in White Sulphur Springs, West Virginia. And you'll recognize some of the names on display. The two biggest were Ahmad Bradshaw, who has had 11 surgeries in nine years but was also a key player on two Super Bowl-winning teams, and former All-Pro defensive lineman Greg Hardy, who has dealt with both on- and off-the-field issues, specifically domestic violence charges in 2014. Ben Tate, Anthony "Boobie" Dixon and Sam Montgomery also took part in the showcase. We were there to capture it all as the players tried to catch the eyes of NFL scouts. 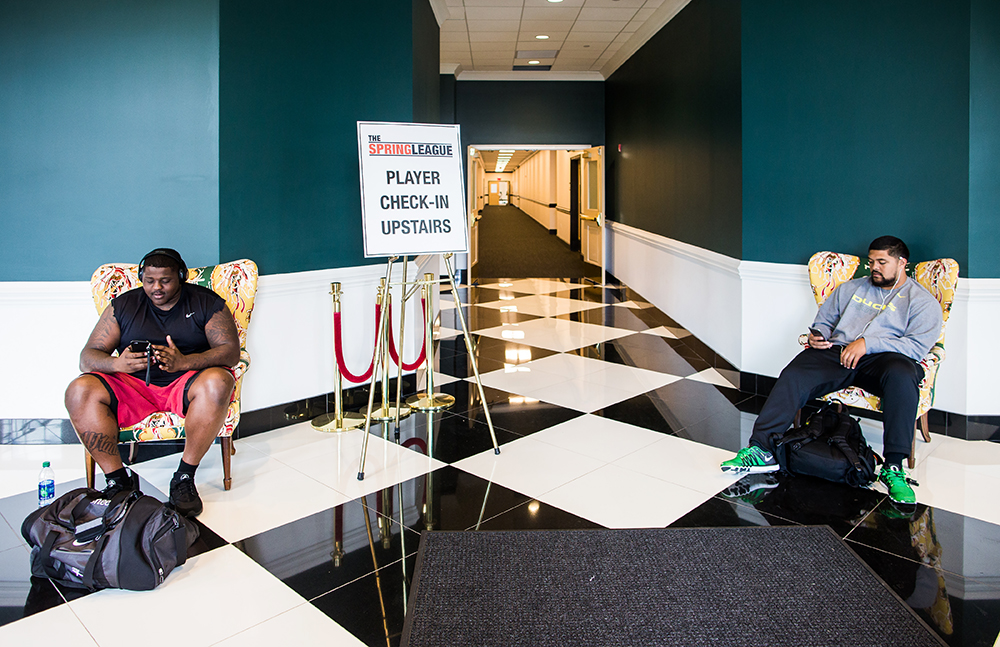 Offensive linemen Mitchell Bell (left) and Haniteli Lousi sit in the lobby of the Greenbrier Sports Performance Center. It might seem like an odd setting to host an instructional football league, but Greenbrier hosted the New Orleans Saints' training camp from 2014-16 and will host the Houston Texans this summer.

LISTEN: Defensive lineman Dominique "Niko" Davis on his expectations for The Spring League 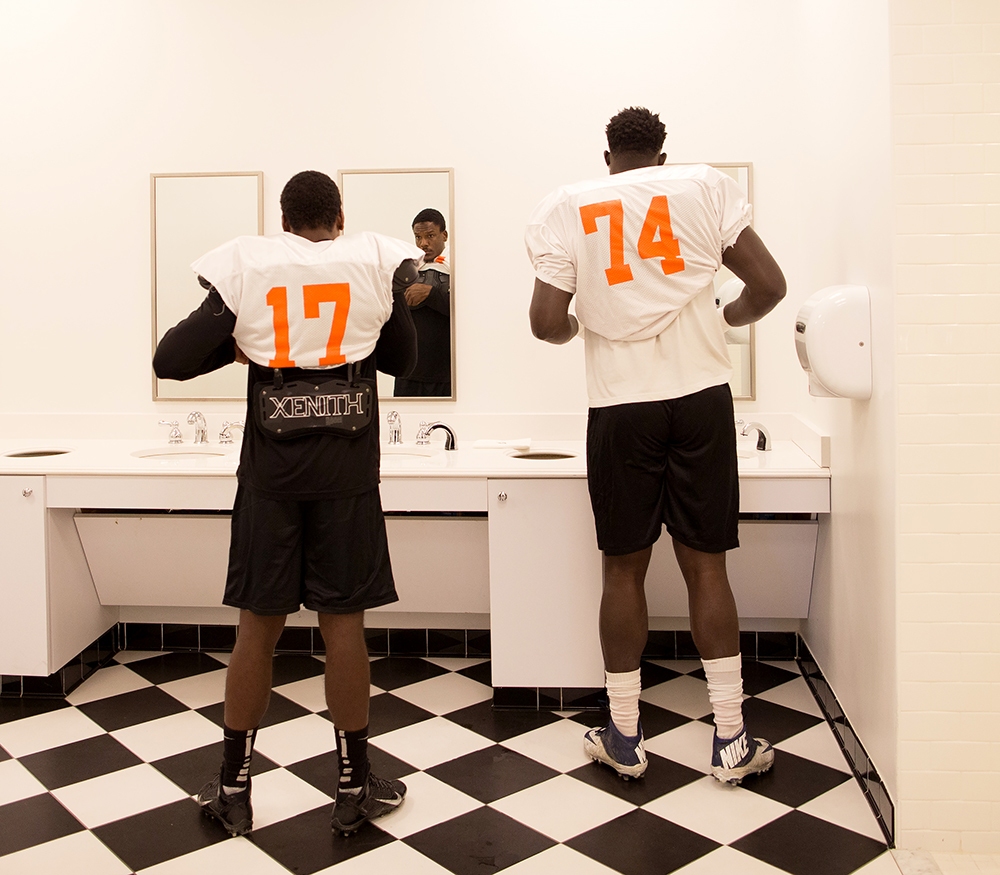 Wide receiver Reese Wiggins (left) and offensive lineman Amadou Konte check their uniforms in the mirror before practice. With 90 players sharing a locker room, players utilized every space they could. 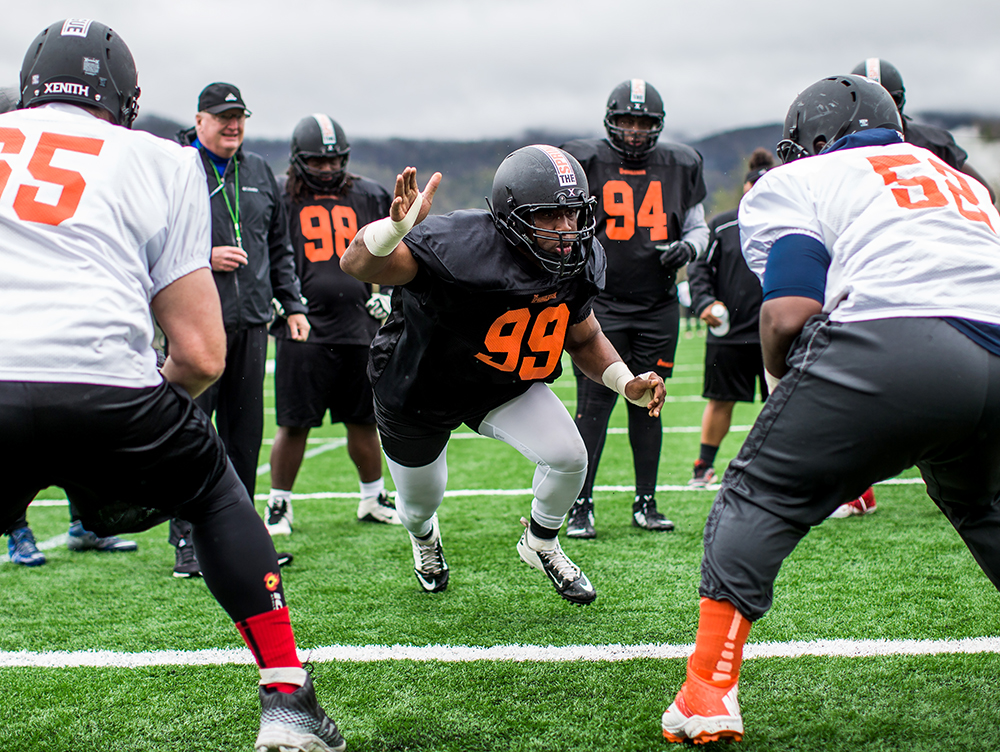 Defensive lineman Sam Montgomery bursts off the line during a drill. Montgomery, one of the more recognizable names at The Spring League, was a standout with LSU and was drafted by the Houston Texans in the third round of the 2013 draft. After being cut for violating unspecified team rules, he bounced around, including a stint in the CFL. Certain he can still contribute, Montgomery postulates, "Wasn't like I wasn't a good player or a good teammate, just wasn't the right time."

LISTEN: Sam Montgomery on his future 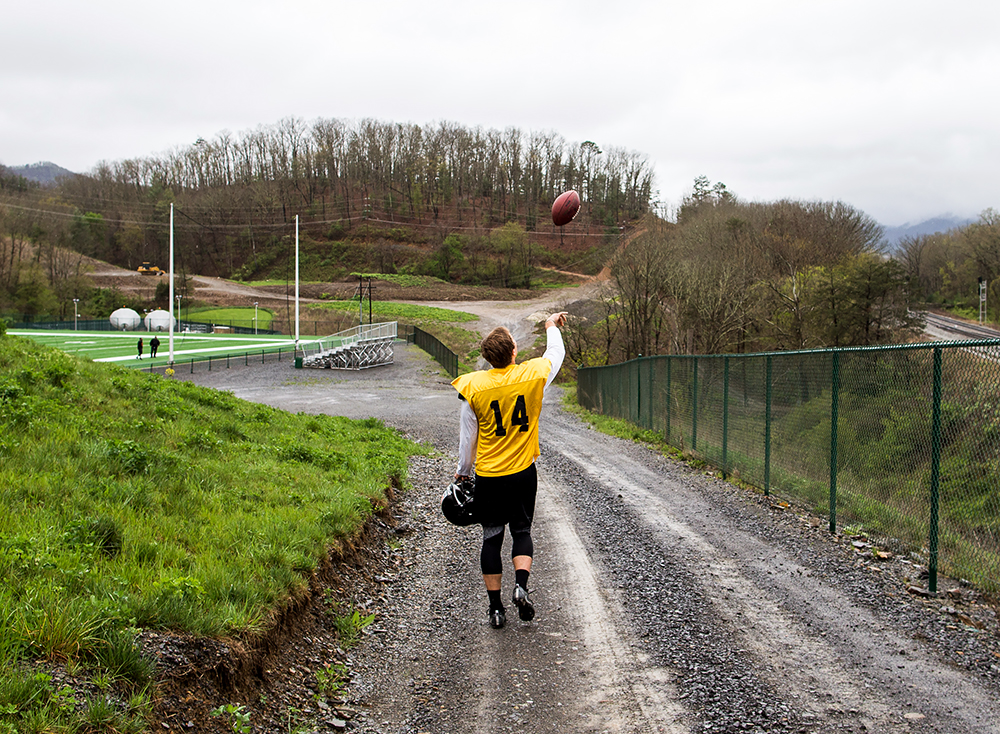 Quarterback David Ash tosses the football as he heads down the gravel path to the practice field. A starting quarterback at the University of Texas, Ash retired from football in 2014 after suffering multiple concussions. But doctors recently cleared him to return to the field as he found a way to manage his once-chronic migraine headaches.

LISTEN: David Ash on being able to take a hit 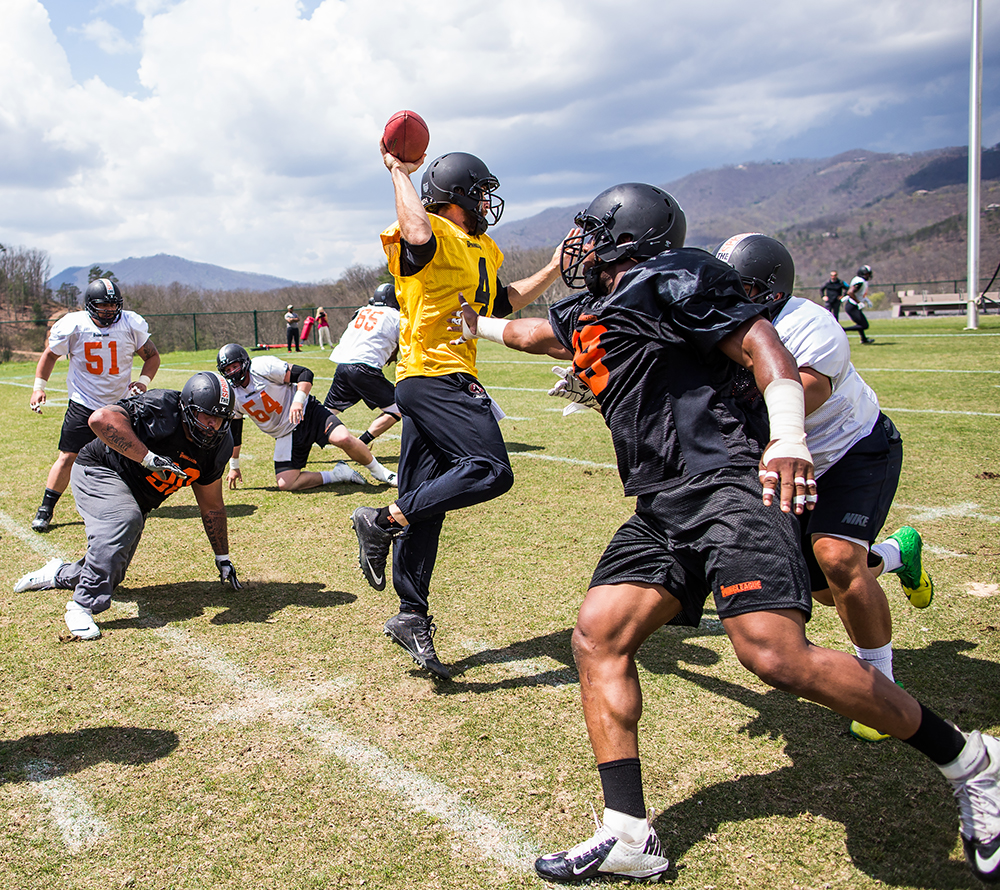 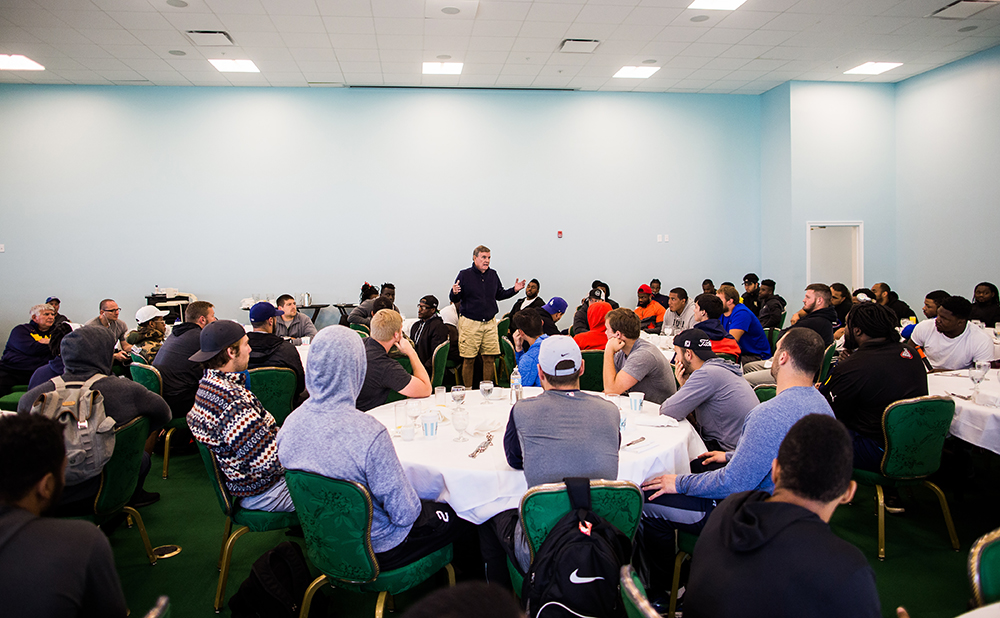 Coach Terry Shea talks at a players meeting before practice. Shea, who has been coaching football since 1970, led the camp along with Donnie Henderson, who has primarily coached defensive backs in the NFL since 1999 and also had a couple of stints as defensive coordinator of the Detroit Lions and New York Jets. Both carried the mantra of approaching the game with respect, first and foremost.

LISTEN: Coach Donnie Henderson on the NFL being a privilege, not a right 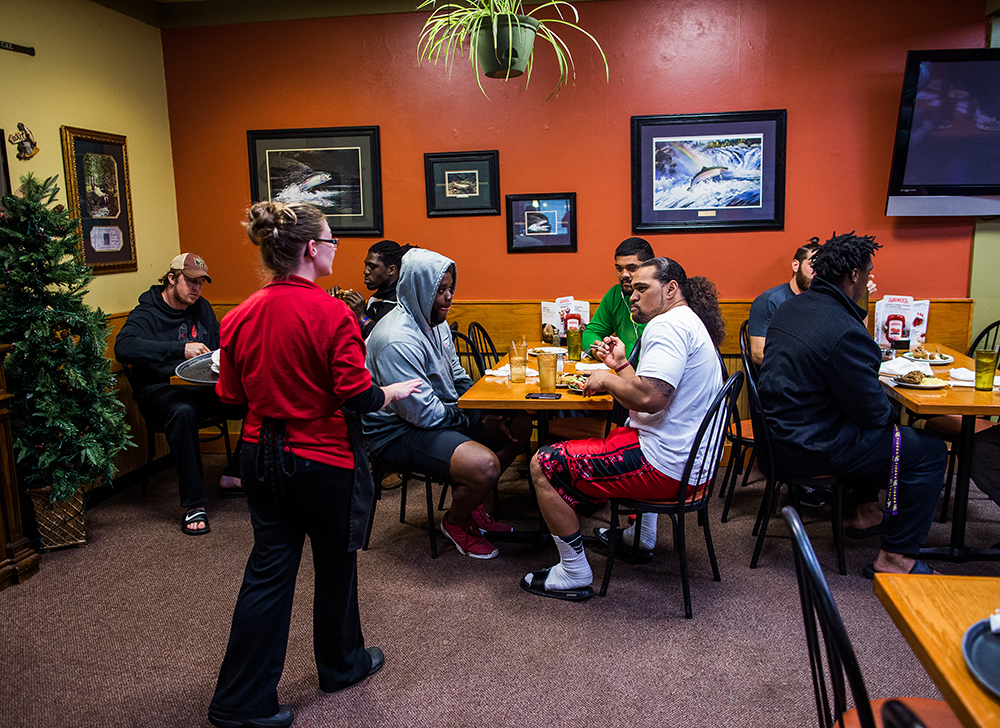 Players were provided two meals a day, which left them to their own devices for the third. Being in White Sulphur Springs didn't afford them many options, so the local Shoney's restaurant became a popular spot. 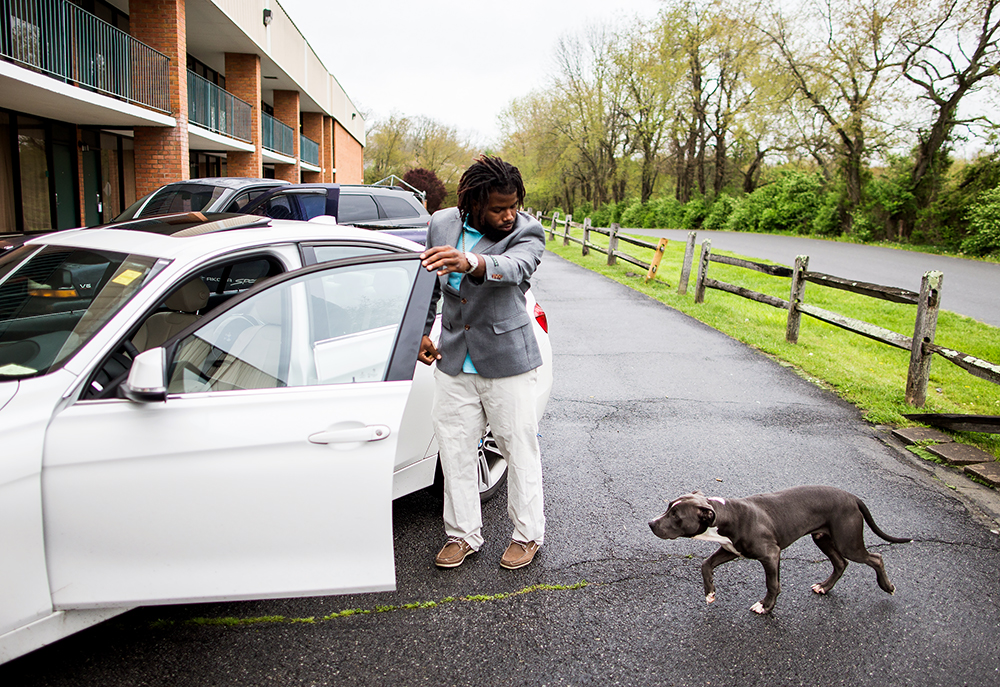 Running back Josh Robinson waits for his dog, Champ, in the parking lot outside. Though the Performance Center is attached to the famed Greenbrier Resort, the players shared rooms in a more dorm-like setting at the Quality Inn in Lewisburg. 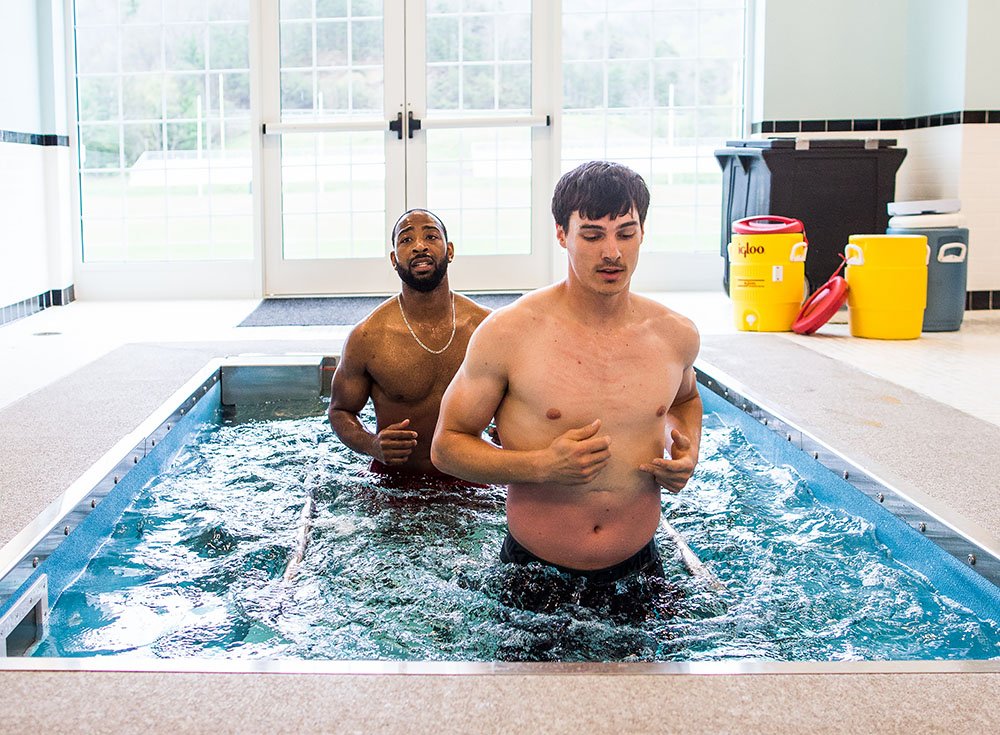 Wide receivers Gavin Lutman (front) and James Shaw run in a jacuzzi before practice. Shaw has seen action in the Arena Football League, and Lutman is still looking for his first opportunity since getting waived by the Vikings as an undrafted free-agent.

LISTEN: Coach Terry Shea on the talent at The Spring League 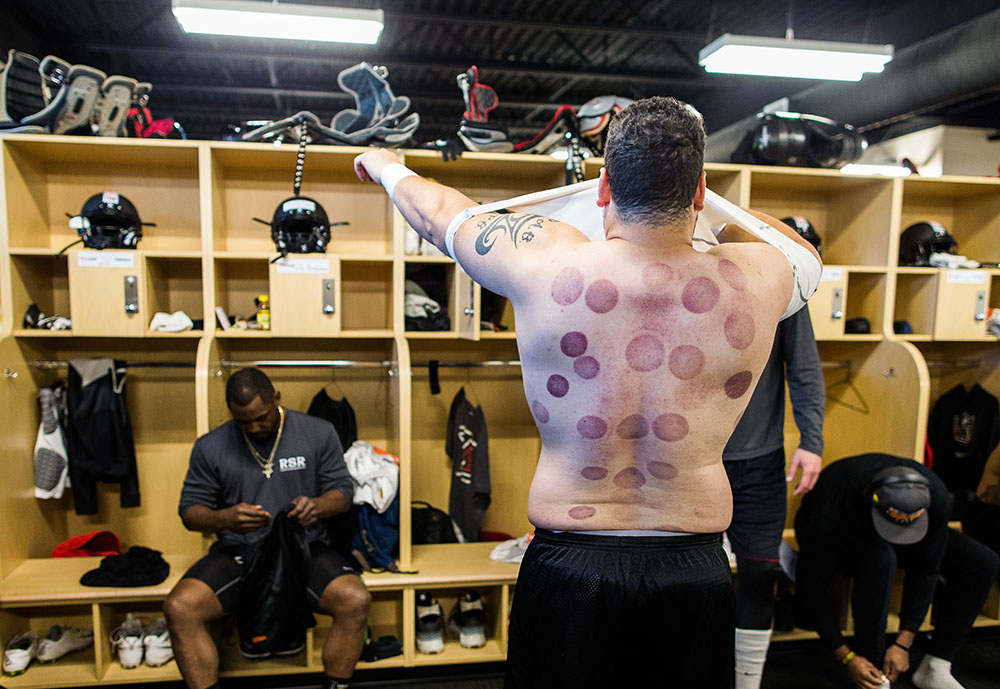 Offensive lineman Trevan Brown out of Miami (OH) University bears the marks from cupping therapy in the locker room. 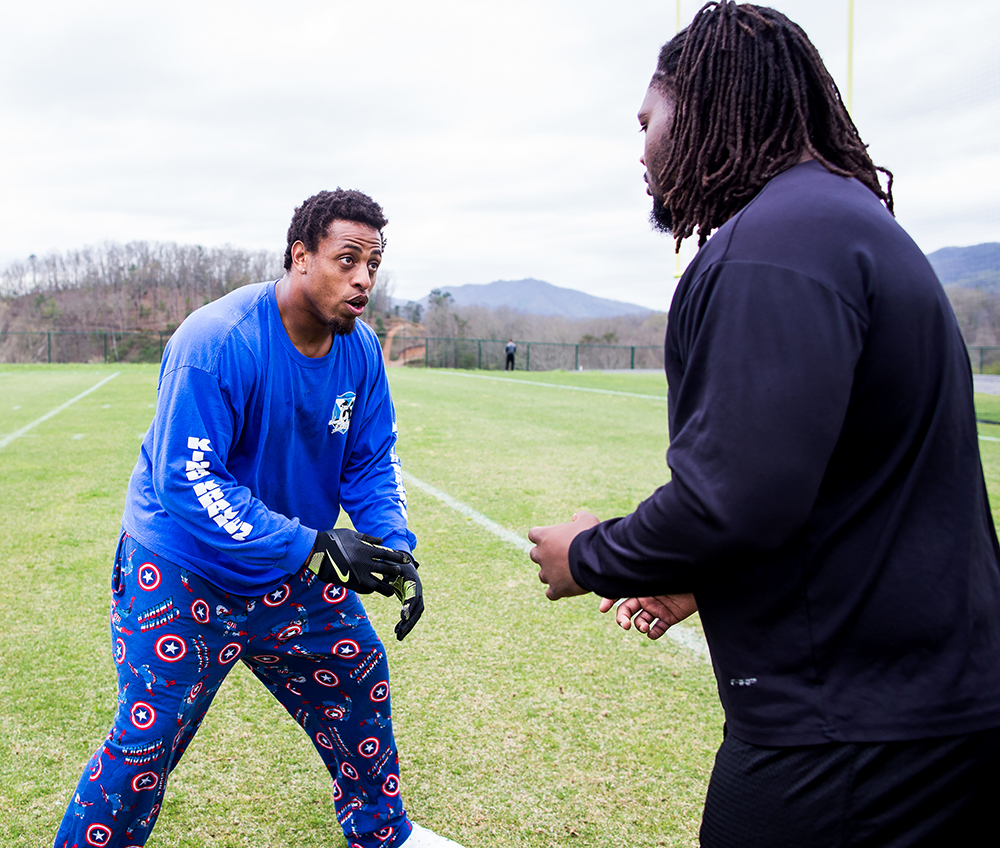 Defensive lineman Greg Hardy goes over some pass-rushing techniques with fellow lineman Marcus Bagley during downtime. Hardy was named a Pro Bowler and second-team All-Pro following the 2013 NFL season, in which he recorded a career-high 15 sacks. He has played in just 13 NFL games since a 2014 incident involving Hardy and his former girlfriend Nicole Holder.

LISTEN: Greg Hardy discussing the importance of passing along knowledge 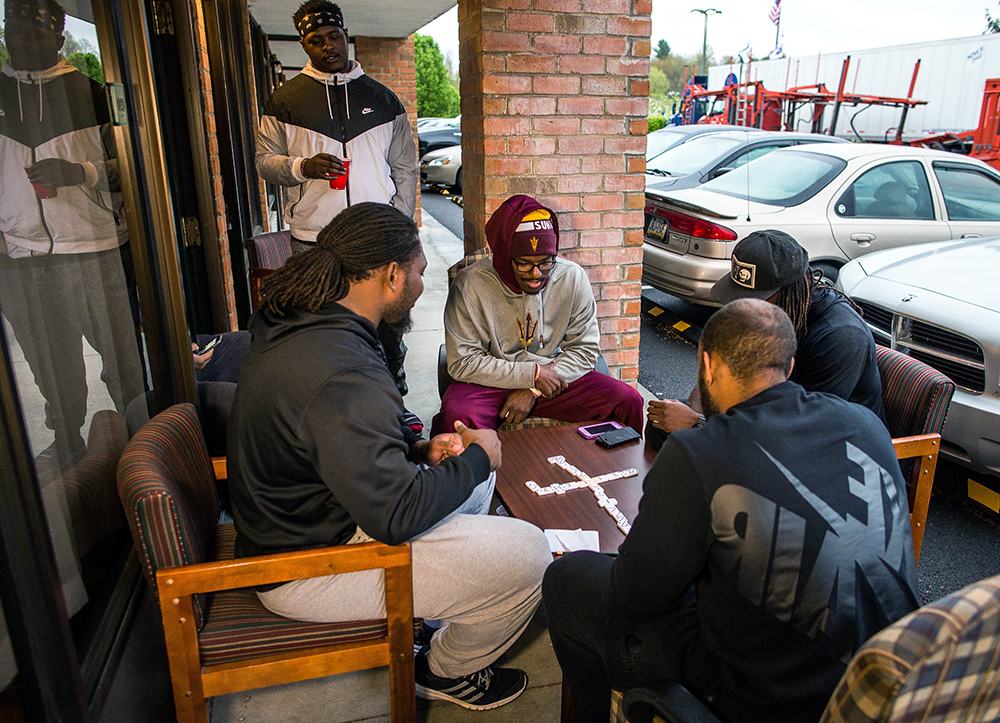 To pass the time during the quiet West Virginia evenings, groups would play dominoes and video games or gather for bible study at the Quality Inn. As much as they missed the game itself, most players equally missed the camaraderie of having teammates. 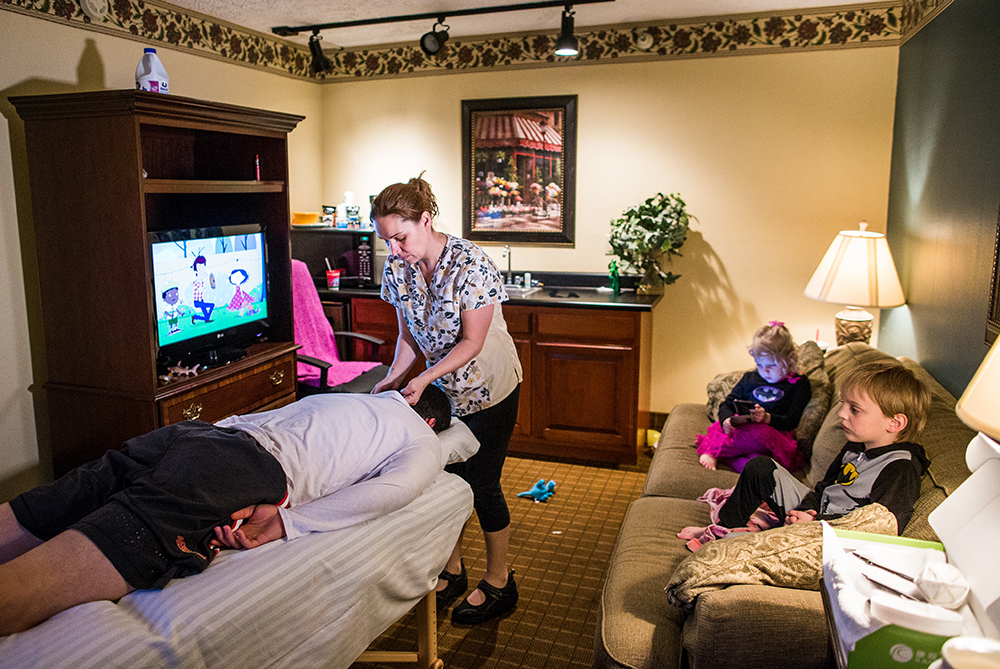 Jody Garber, wife of The Spring League's equipment manager, Matt Garber, pitched in to help aching bodies from a long day of practice by offering massages in their hotel room. Jody and Matt brought their family out from Las Vegas to help get the league's inaugural season off the ground. 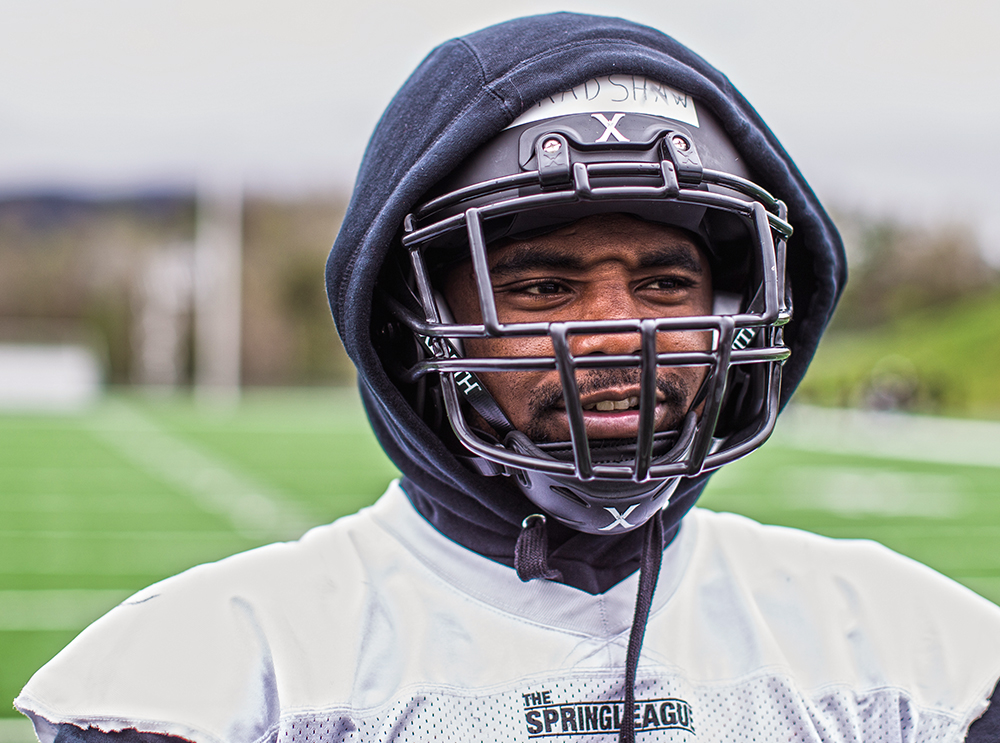 NFL veteran running back Ahmad Bradshaw looks on during practice. Though he has dealt with several injuries during his nine seasons as a pro, he says he can't bring himself to walk away. "I love it. That's why I'm still out here."

LISTEN: Ahmad Bradshaw on his injuries 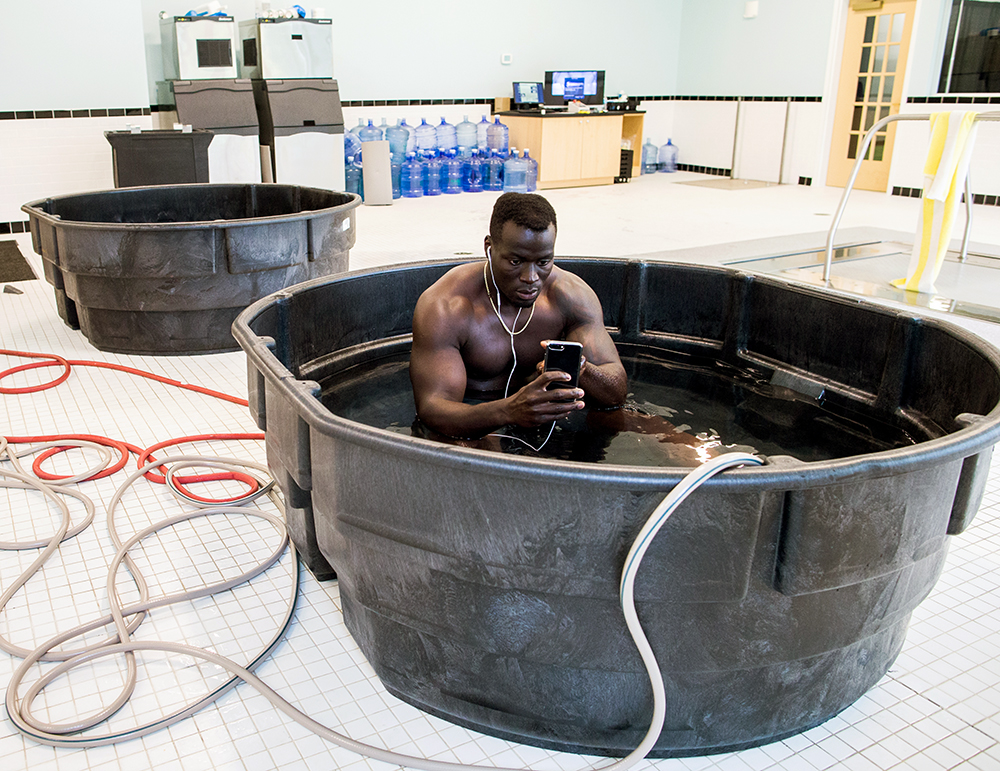 Defensive lineman Elhadji Ndiaye soaks in a tub of hot water before practice. Born in Senegal, Ndiaye grew up mostly in the Bronx, New York, where he played basketball through high school. After playing basketball at Grossmont College in San Diego, he transferred to Nebraska-Kearney, where he played two seasons on the football team. The Browns gave him a shot in 2014 based on his strength and size, but he didn't stick on their roster. 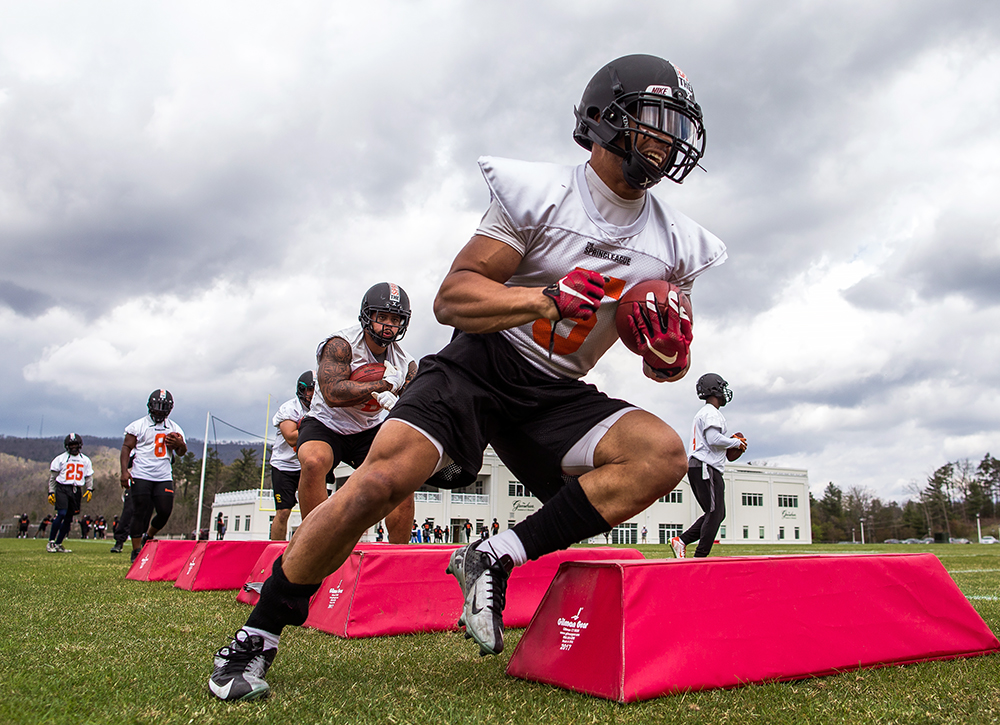 Running back Kelsey Young goes through a drill with other players. Young, who played three seasons for Stanford and one for Boise State, was signed as an undrafted free agent with the Washington Redskins last season, but he was cut before he had a chance to take the field.

LISTEN: Fellow running back Anthony "Boobie" Dixon on being cut from the NFL 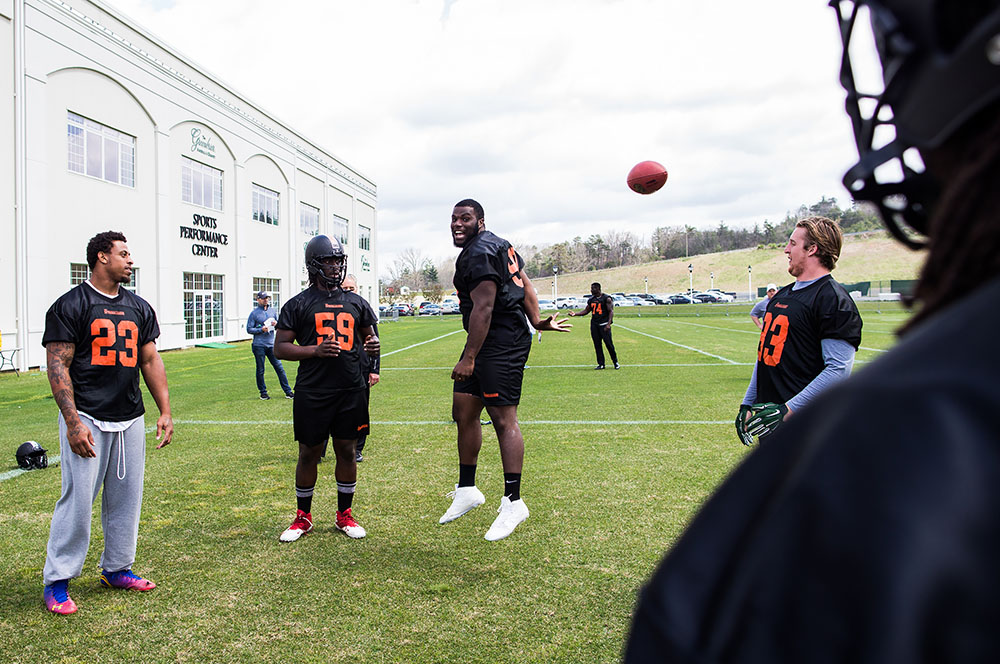 Defensive lineman Calvin Heurtelou tosses the ball during a round of hot potato, a drill defensive players use to work on their hands.

LISTEN: Greg Hardy on being away from the game 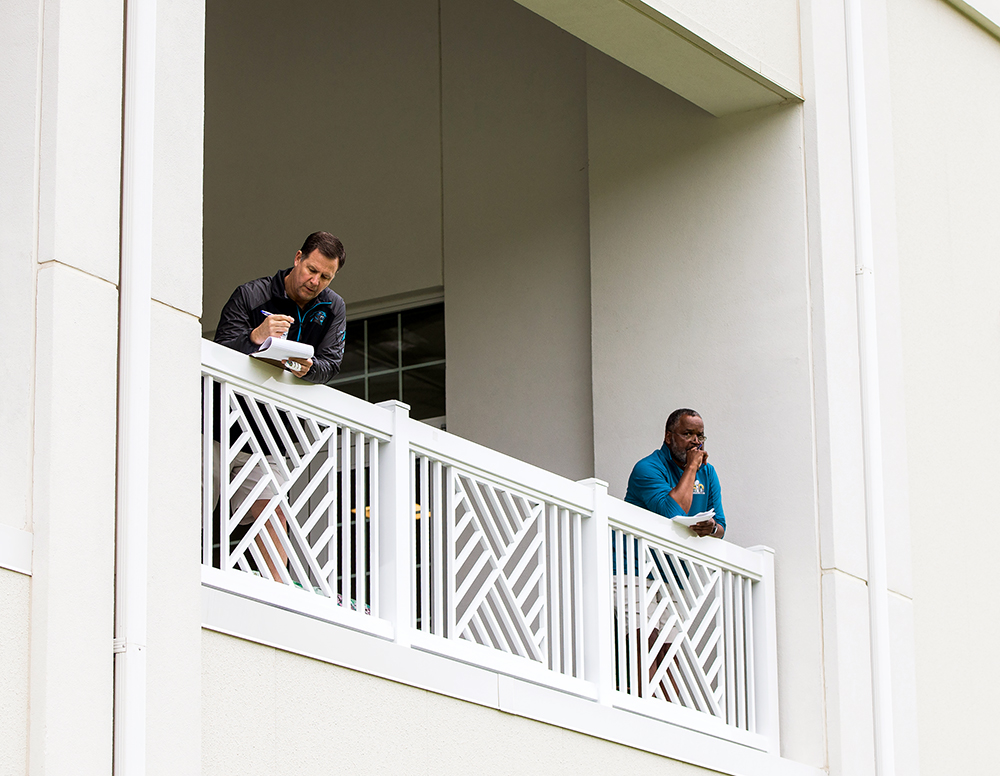 Scouts from the Carolina Panthers and the Miami Dolphins look on during a game. NFL and CFL scouts would check in on practices and games or request video throughout the camp, and most agreed that an additional league is needed for the growth and development of NFL talent. 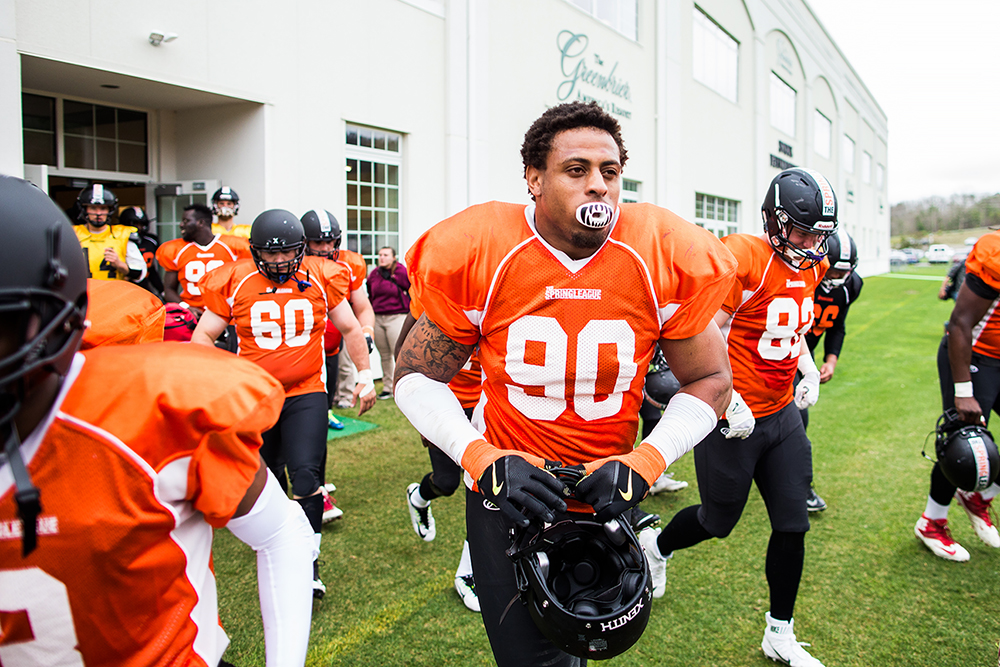 Greg Hardy takes the field before a game during the inaugural season of the Spring Football League.

LISTEN: Hardy on being humbled 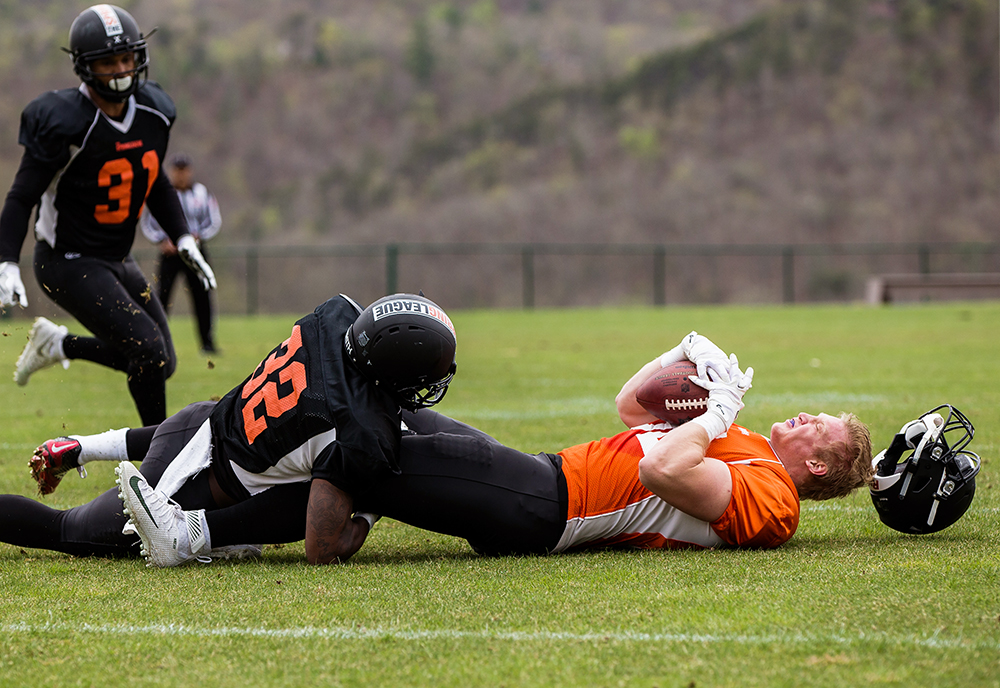 Tight end Jonathan Powell loses his helmet after being tackled by defensive back Josh Burch. With everything to prove and everything to gain, the action was intense and hard-hitting.

LISTEN: Defensive lineman Dominique "Niko" Davis on being a spectator 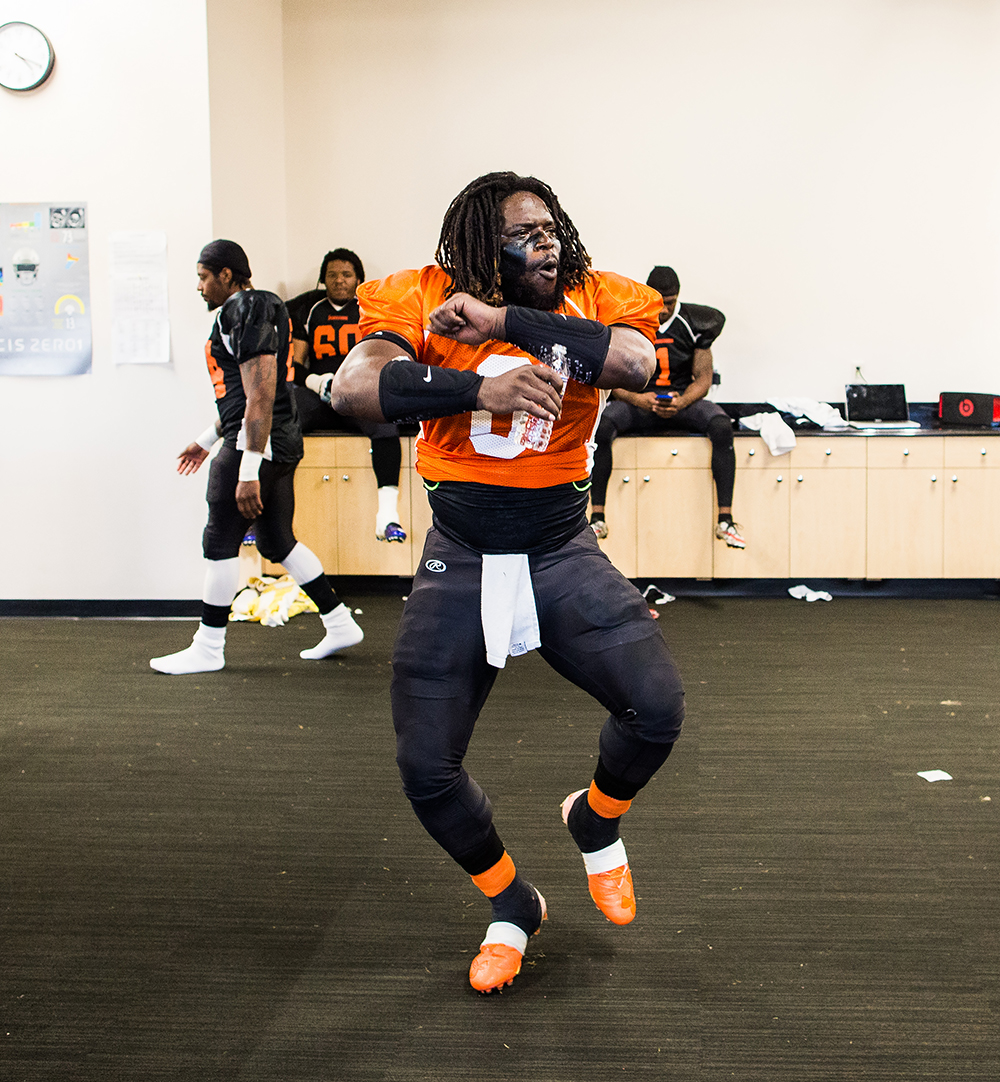 Running back Anthony "Boobie" Dixon dances in the locker room on game day. Dixon was drafted by the San Francisco 49ers in the sixth round of the 2010 draft and played six NFL seasons between the 49ers and Buffalo Bills.

LISTEN: Dixon on Sundays in NFL