The Sydney Swans might be blazing the strangest trail to the finals of any team in the modern era. Since 1994, when the competition adopted a top eight finals system, no team has lost their first four games and gone on to make the eight.

Not only did Sydney start the year 0-4, but they dropped their next two as well, to sit at a dismal zero wins from their first six games. At 0-6, they were deeply into 'historically unprecedented to make the finals from here' territory. But since then, they've stacked on the wins, dropping only one out of their past 11 matches to sit at 10-7 for the year, sixth on the ladder. 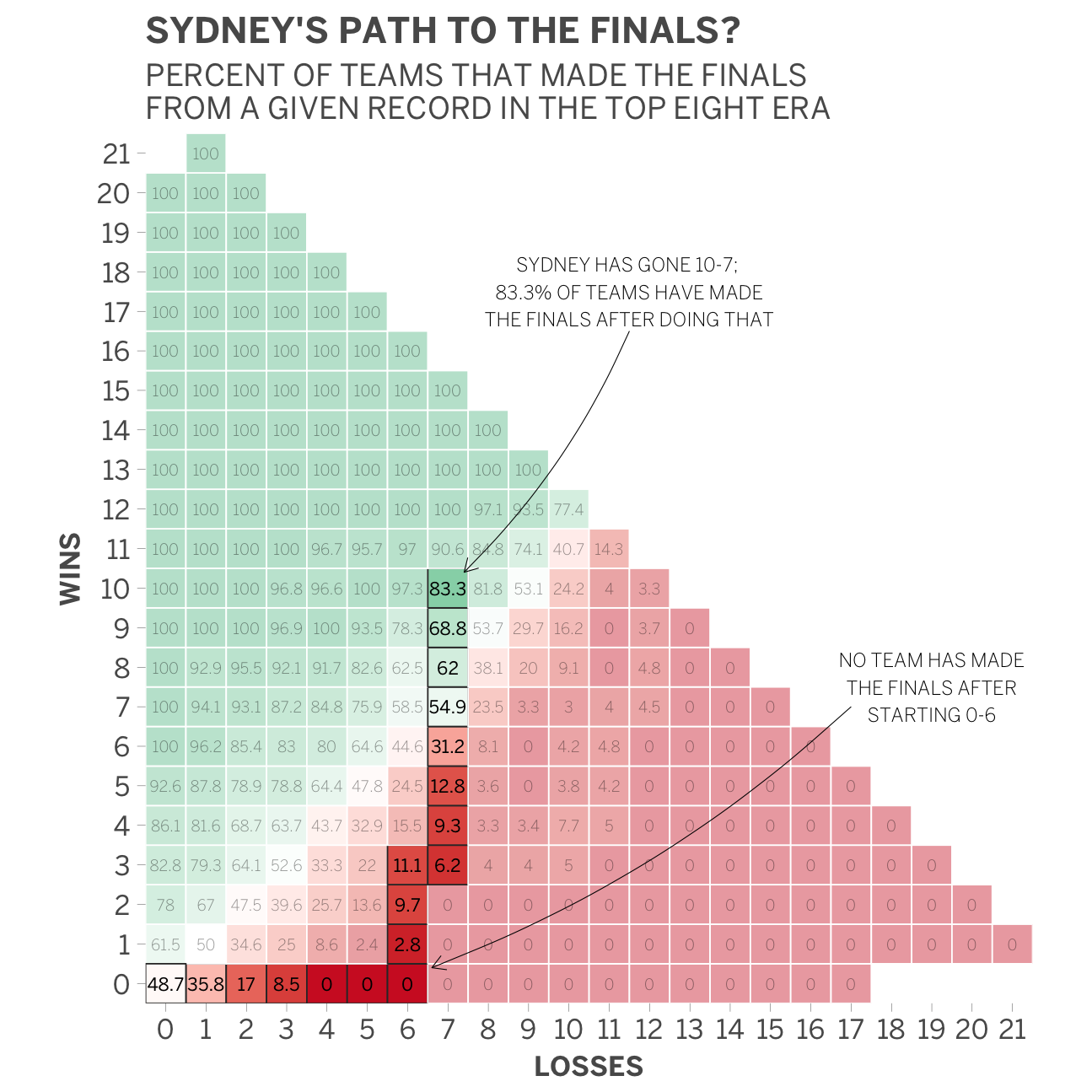 DATA: AFLTABLES.COM. INCLUDES ALL SEASONS FROM 1994-2016. EXCLUDES TEAM-SEASONS WITH A DRAW AND EXCLUDES THE 2013 BOMBERS AND BLUES.

The Swans' 2017 campaign is almost certainly going to continue into September, which will leave them with arguably the most improbable path to the finals of any team in the top eight era. The previous least probable paths to the finals have been blazed by:

After their dismal start to the year, the history books provided no solace to the early-season Swans, showing no team had ever climbed back to the finals from their position. But our Elo projections weren't quite so pessimistic. Even after going 0-4 to start the season, our simulations still gave them a healthy 42 percent chance of sticking around until September; by the time they were 0-6, deep in 'historically unprecedented' territory, Elo gave Sydney a 15 percent chance. 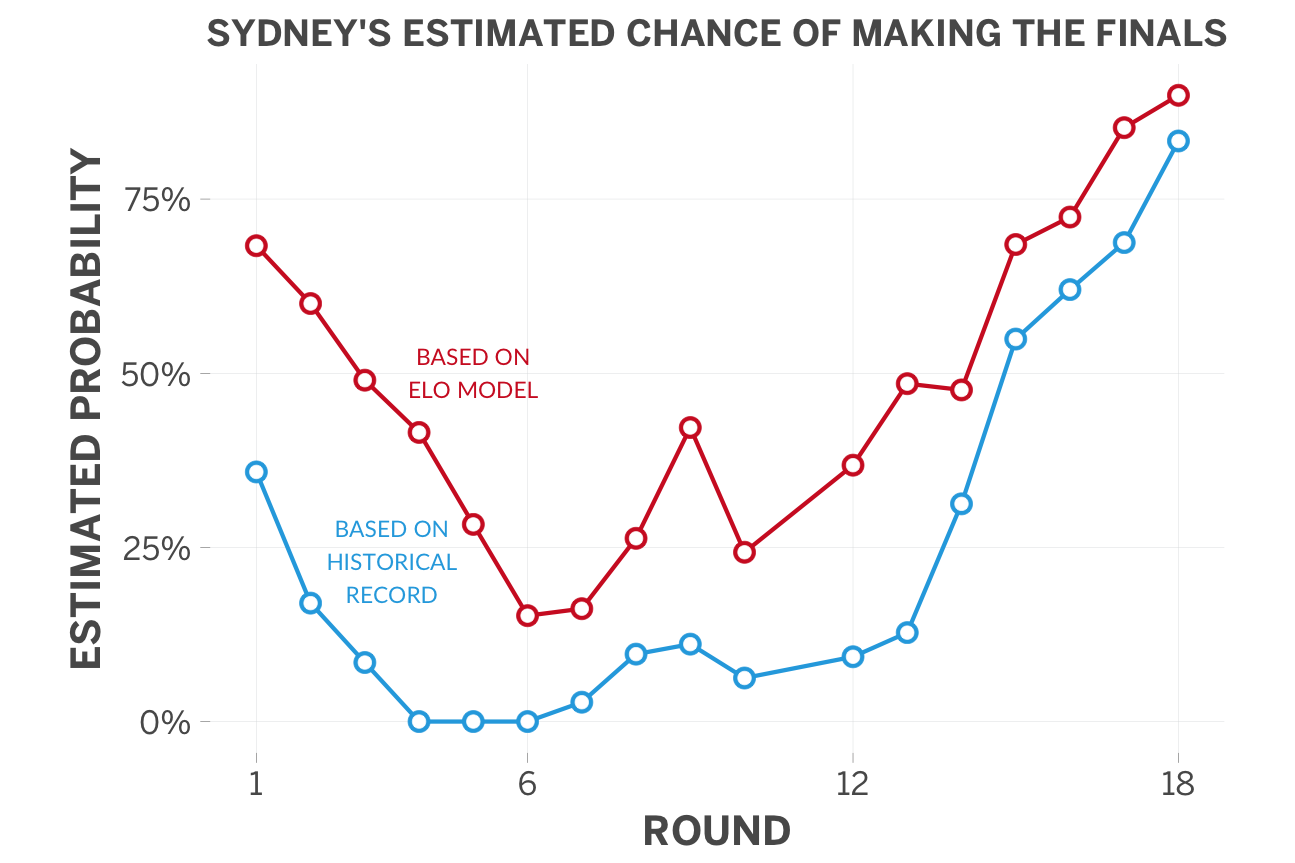 DATA: AFLTABLES.COM. HISTORICAL RECORD INCLUDES ALL SEASONS FROM 1994-2016, EXCLUDING TEAM-SEASONS WITH A DRAW AND THE 2013 BLUES AND BOMBERS.

The Swans are only a game out of the top four, and the betting markets currently give them the second shortest premiership odds of any team in the competition, behind only the Crows. After having been down for the count, Sydney aren't just looking like scraping in to the finals, they are a genuine contender.

So what has changed for Sydney since their terrible first month and a half? In short: most things. Their performance has improved in all parts of the ground.

In the opening six rounds of the season, the Swans were performing fairly poorly in the midfield, only managing to get the ball inside their attacking 50m arc 0.89 times for every time their opponents recorded an inside 50, on average. From Round 7 onwards, that ratio has turned around quite dramatically, with the Swans now averaging 1.2 inside 50s for every one they concede. They've gone from the fifth-worst inside 50 ratio in the competition early in the season, to the second best ratio (behind Port Adelaide) from Round 7 onwards. Their midfield is firing again.

The Swans have become more effective at using the ball when it gets into their 50m arc as well, recording 0.51 scoring shots for every inside 50 since Round 7, compared to just 0.42 in the opening rounds of the season. At the defensive end of the ground, they've tightened up considerably, restricting their opponents to just 0.4 scoring shots for every inside 50, on average. The Swans have improved in all parts of the ground. 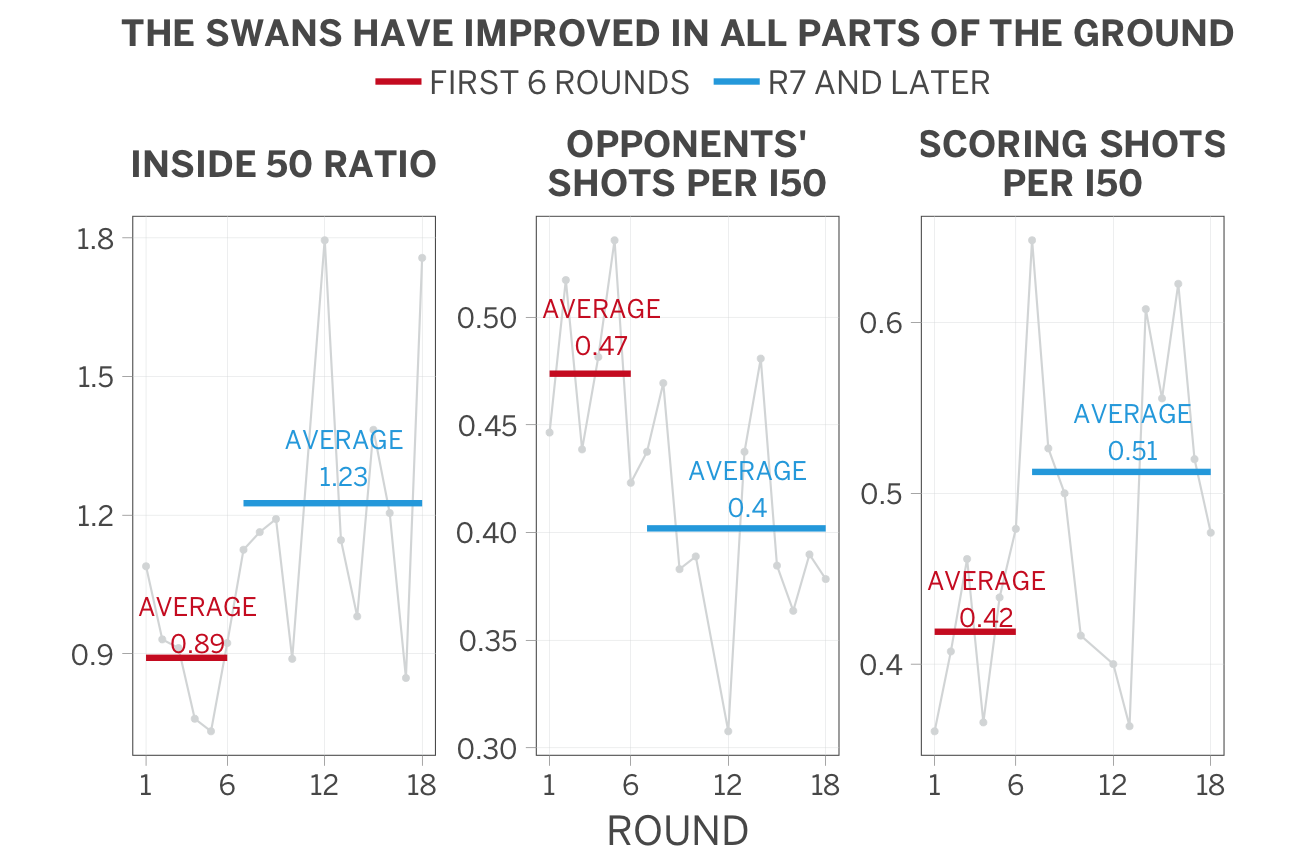 The Swans' turnaround has been broadly based, but their performance at the contest really stands out. In those first winless six games of the year, the Swans were averaging 2.8 clearances less than their opponents, and a massive 11.3 fewer contested possessions. Those figures have turned around dramatically. 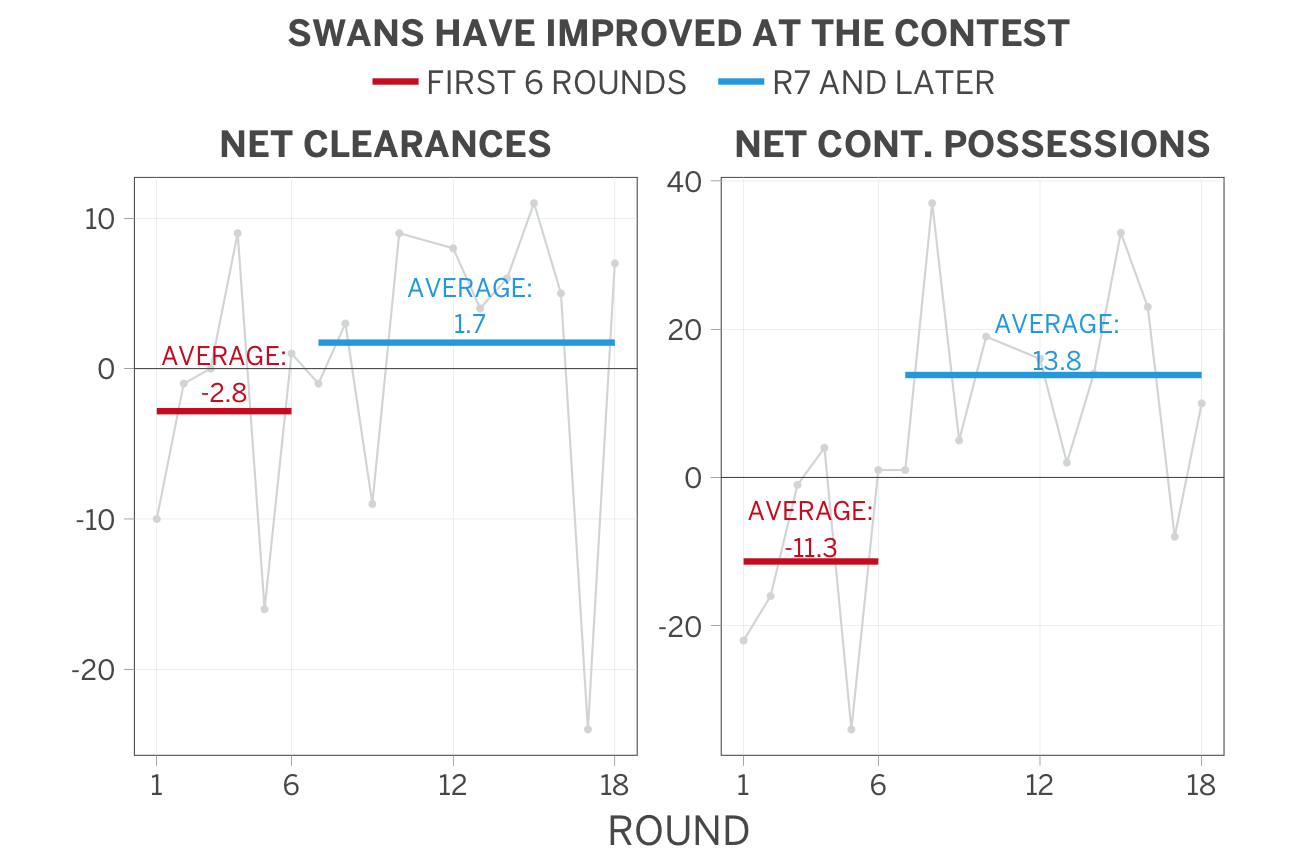 Even after losing their first six games of the year, the Elo ratings system still regarded the Swans as an above-average team. They had a rating of 1522, compared to a league average of 1500. Since then, they've bounced back firmly into 'genuine contender' territory, and are now rated 1625, just behind the league-leading Crows. 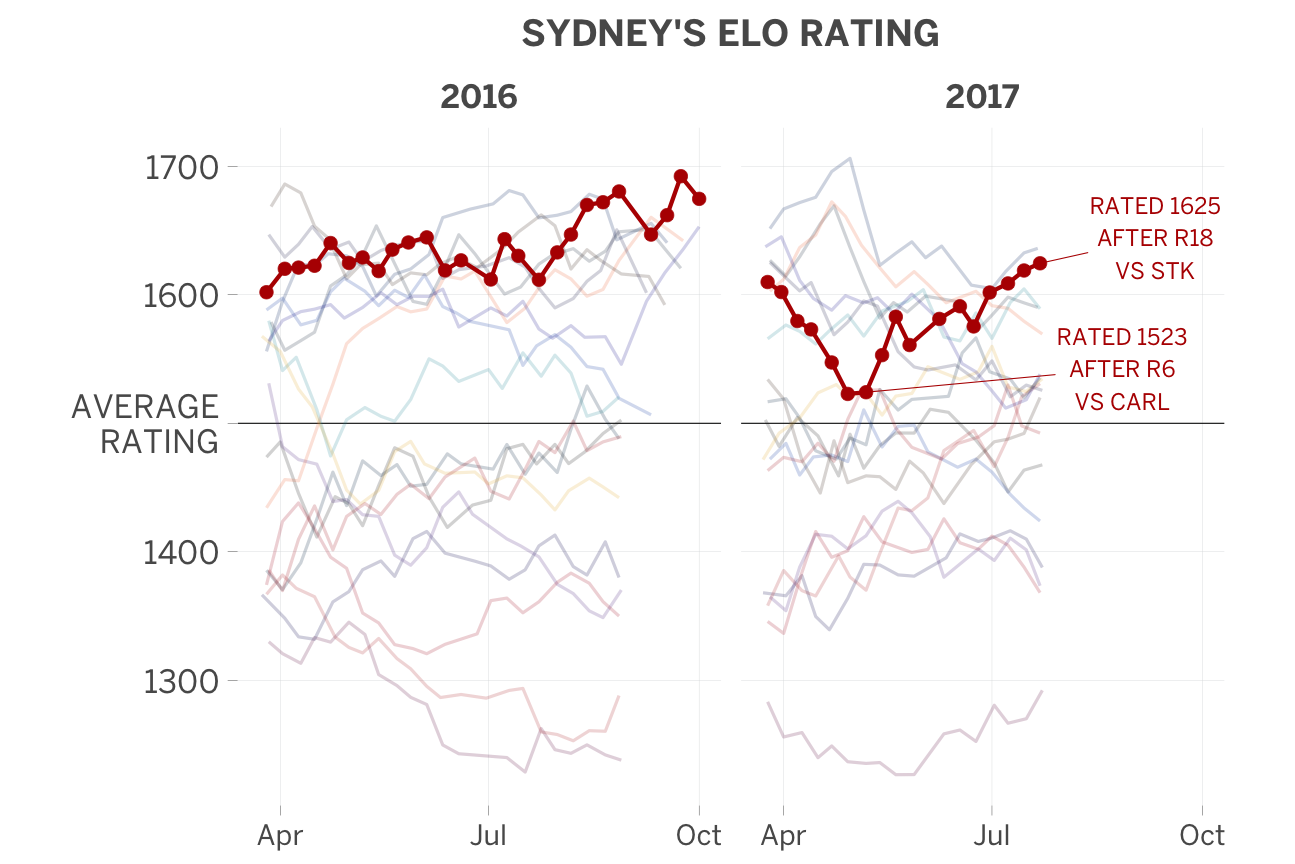 The Swans are now about as good as they were this time last year, when they were many people's picks for the flag. They're right back in it for 2017, and if they do end up winning it all, it'll be a premiership journey for the ages.