The Little League World Series fields in Williamsport, Pennsylvania, are a place of joy and civic pride for the townspeople and a shrine to youth baseball for the rest of the world. Taking part in the LLWS is a once-in-a-lifetime experience for players, but it takes an army of volunteers to pull off the annual tournament. ESPN.com took a peek behind the scenes to see how "the birthplace of Little League baseball" comes alive. 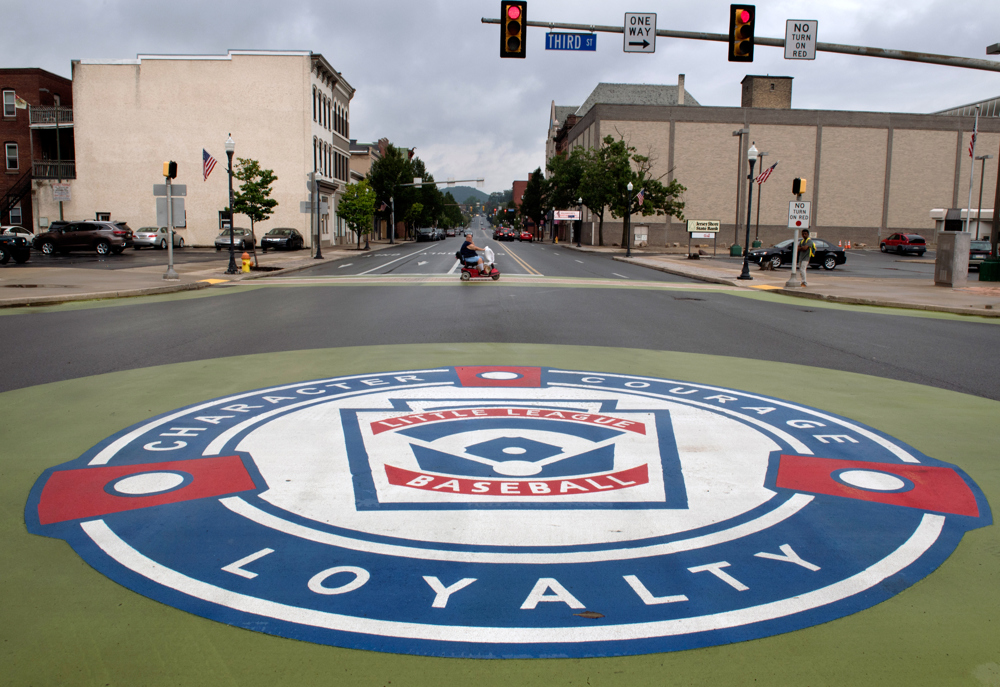 The Little League logo and motto greet visitors at the intersection of Market and Third streets in the center of downtown Williamsport. The logo is painted on the street and is surrounded by a series of sculptures relating to Little League, which was founded by Carl Stotz in 1939 in Williamsport. 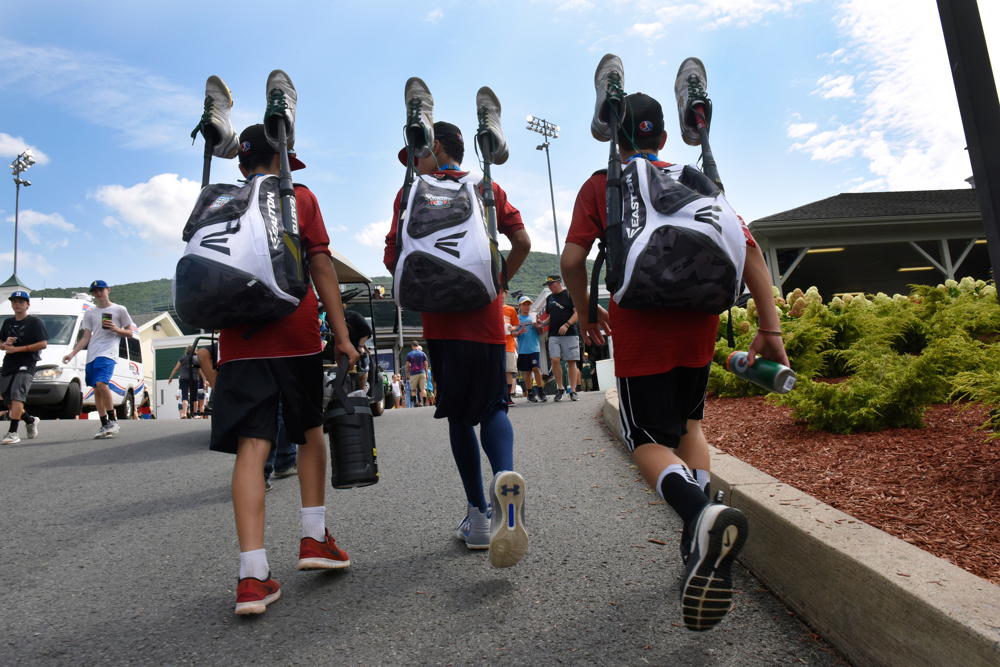 Players from Team Canada found a creative way to carry their cleats back from practice at the Little League complex on Aug. 19. 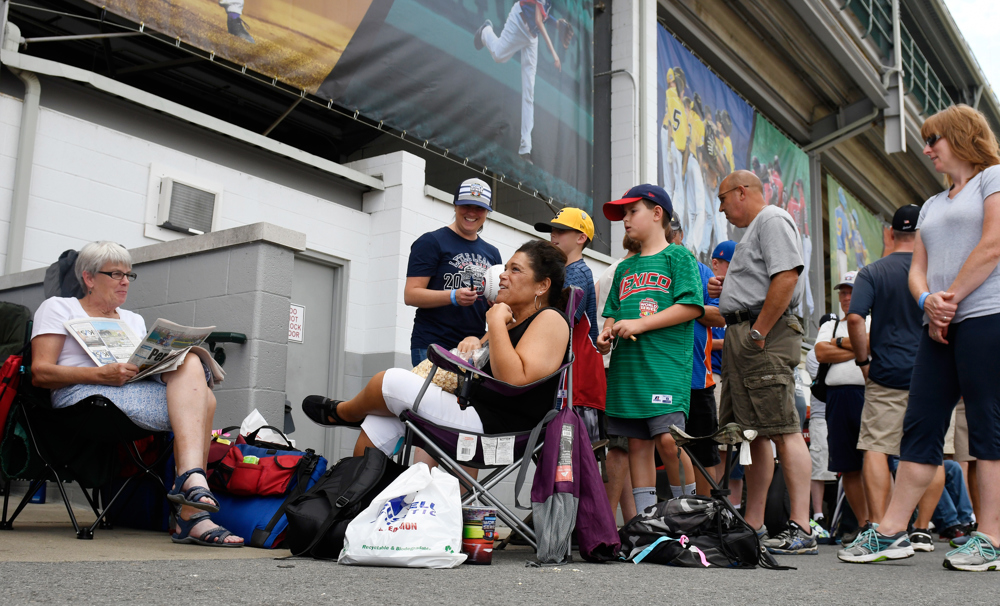 Fans line up early outside Howard J. Lamade Stadium, where Little League World Series games have been played every year since 1959, to get prime seats. Admission to Lamade Stadium -- which seats 3,300 -- is free, but fans must have a ticket for most games. General admission tickets not used by the families of the players are distributed on a first-come, first-served basis the day of the games. 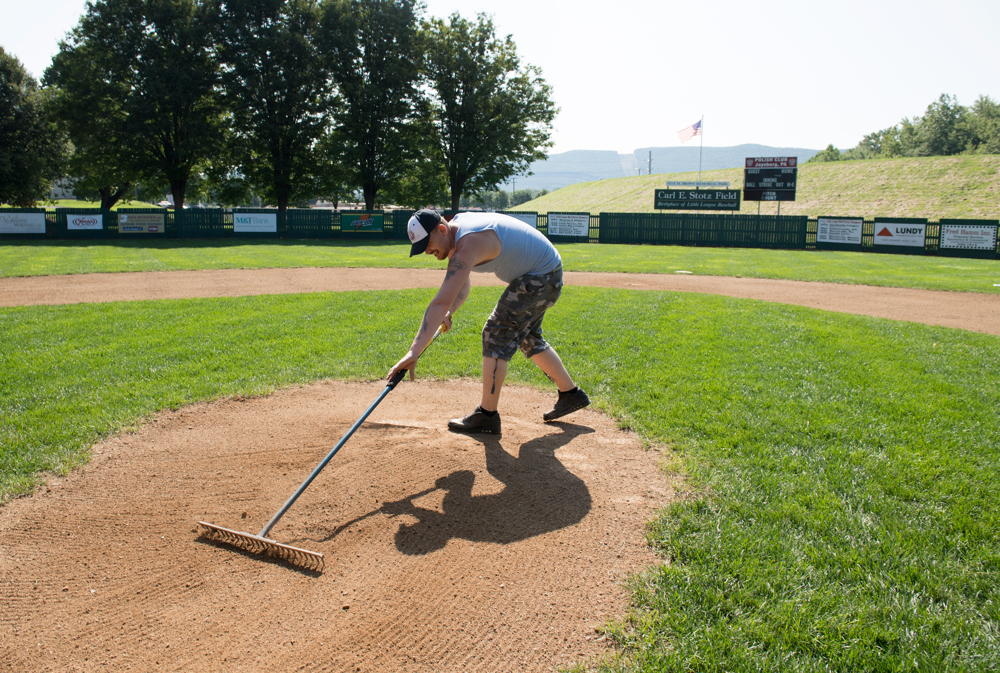 Since the second season of Little League in 1940, Carl E. Stotz Field has affectionately been known to Williamsporters as Original Field. It's even listed in the National Register of Historic Places. Even though the field is no longer affiliated with Little League International, many call the field "The Birthplace of Little League Baseball." Here, Chris Pelletier rakes the pitcher's mound at the park. A chef who says he is between jobs, Pelletier has been volunteering at the field for several years. "When the kids smile, I smile," he said. "Little League Baseball is what Williamsport thrives on." 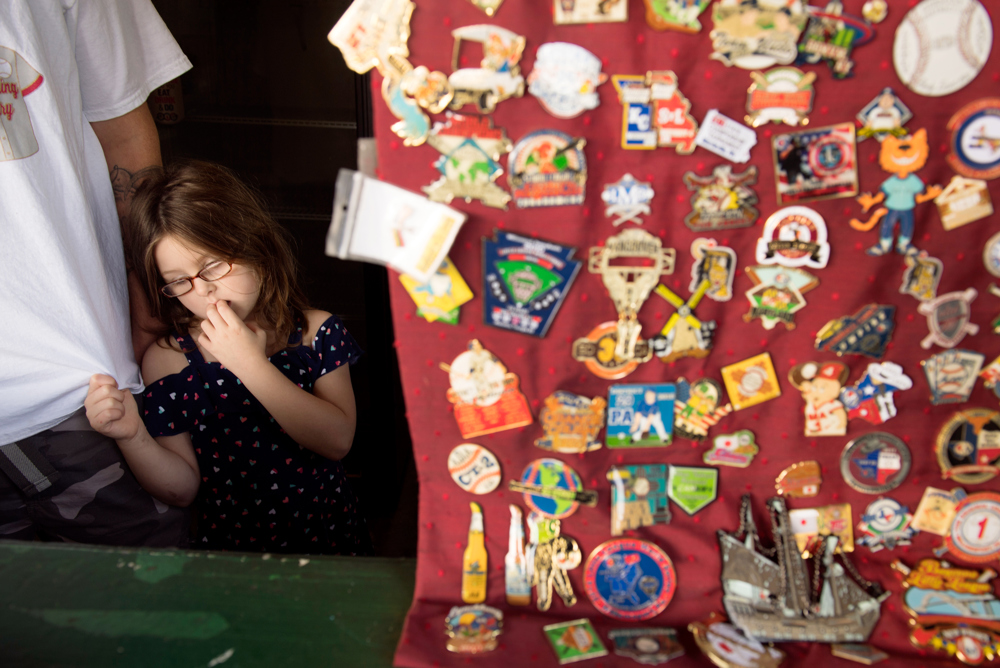 Hayden Pelletier, 6, clings to her father, Chris Pelletier, as he volunteers in the concession stand at Original Field. "It's good for her to see how baseball brings people together," Chris said. 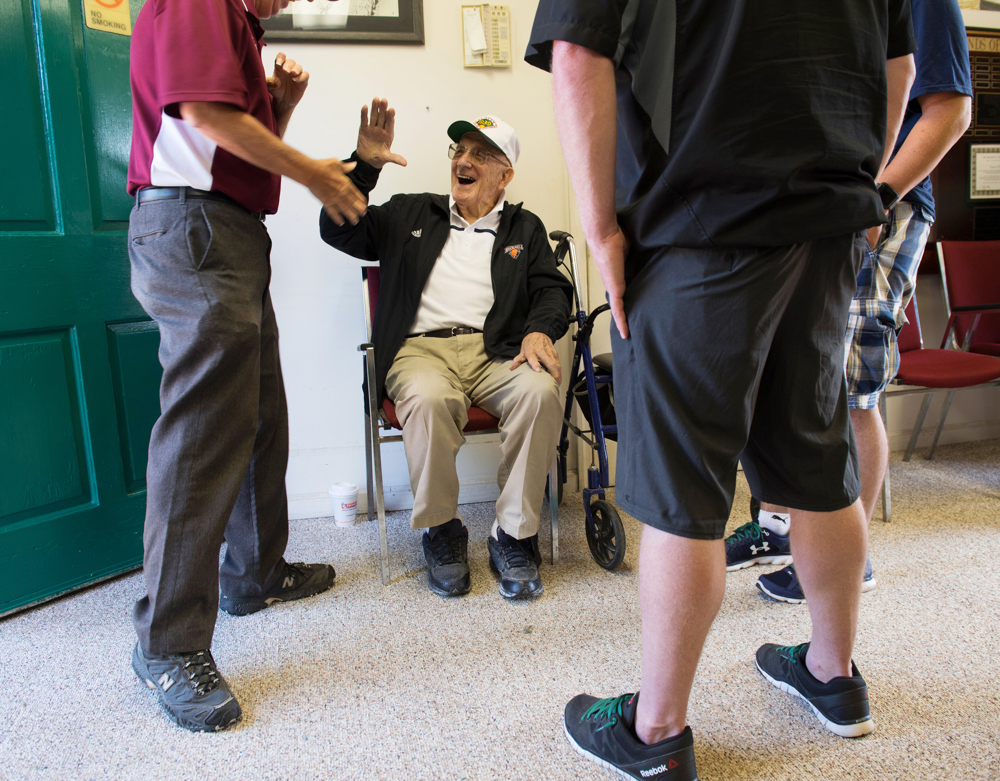 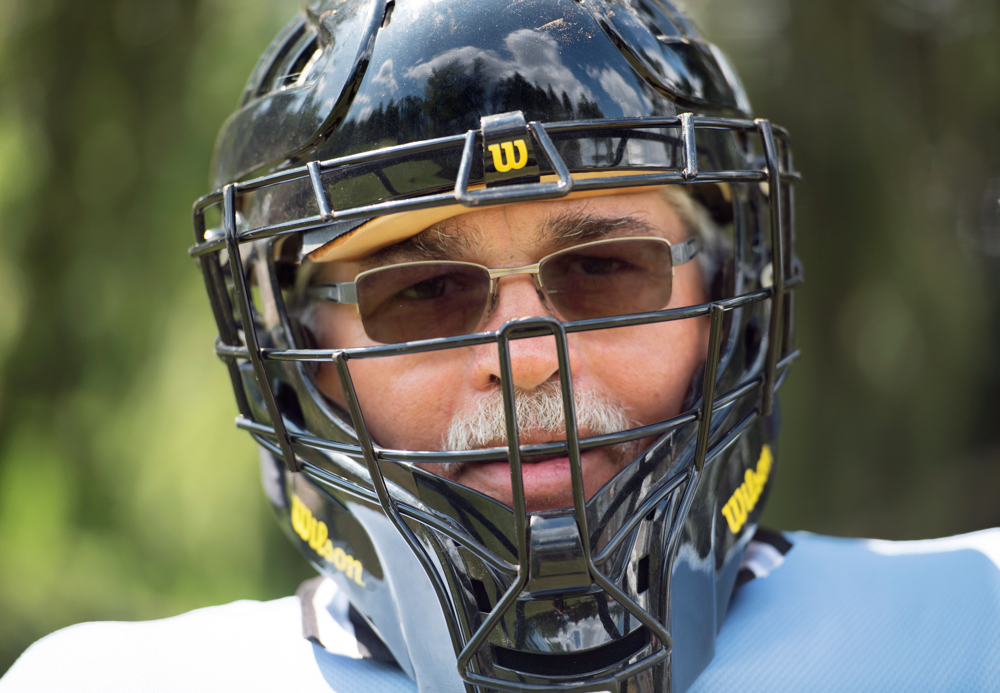 Doug Alexander, 63, is an inside salesperson for a plastics company and an umpire in the Williamsport and Montoursille, Pennsylvania, communities. Alexander said he has applied to be an umpire at the Little League World Series each of the past 25 years but has not yet made it through the rigorous and competitive selection process. He also volunteers as a host for visiting teams playing in the LLWS. "I dream of umpiring here," he said. "It's at the top of my bucket list." 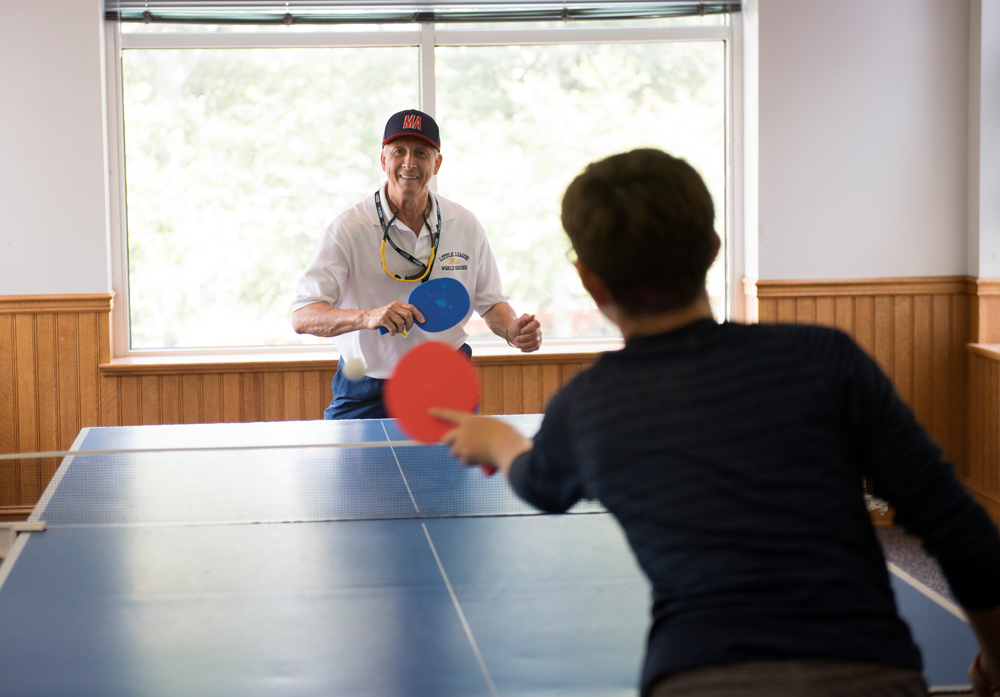 Joe Girio, a Williamsport native and volunteer Little League World Series team host, plays ping-pong with Andy Osmond, a pitcher and first baseman for the New Jersey team. Girio, who has been volunteering as a host for 20 years, is known to the players as "Uncle Joe." Some of the friendships he makes with players here can last a lifetime. A player from the Florida team that competed in the 2001 Little League World Series invited Girio to his wedding years later. Girio went and said that attending the festivities gave him an opportunity to connect with other players from the team he hosted that year. 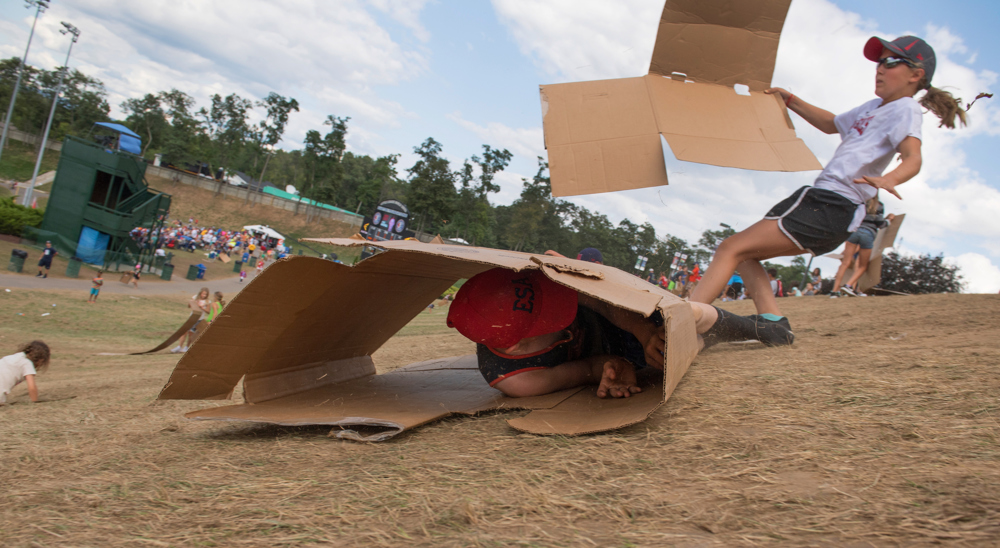 "The Hill," the steep, grassy incline above the outfield wall at Lamade Stadium, is as much an iconic image of the tournament as the baseball itself. It is part playground -- especially for youngsters such as Nolan Leszczyk, 12, of Taberg, New York, who rolled down the hill between innings of a game Aug. 24 -- and part seating area. 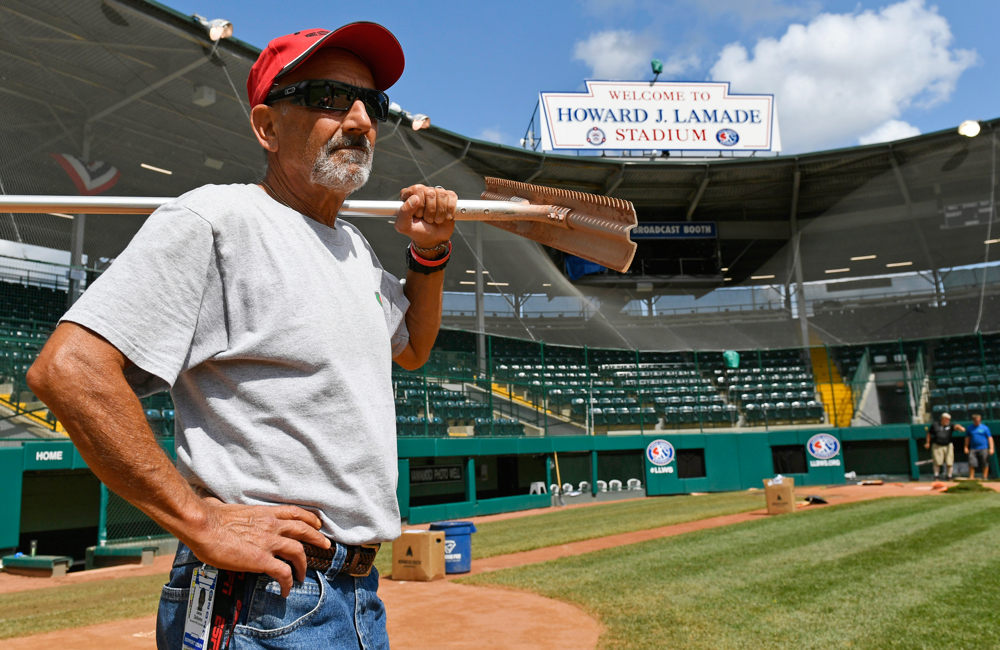 Jim Dellomo has been volunteering with the Little League World Series grounds crew at Lamade Stadium for 19 years. The City of Williamsport equipment operator uses two weeks of vacation time to spend a fortnight with the about 30 volunteers who help with field maintenance. "It's all about the kids," he said. 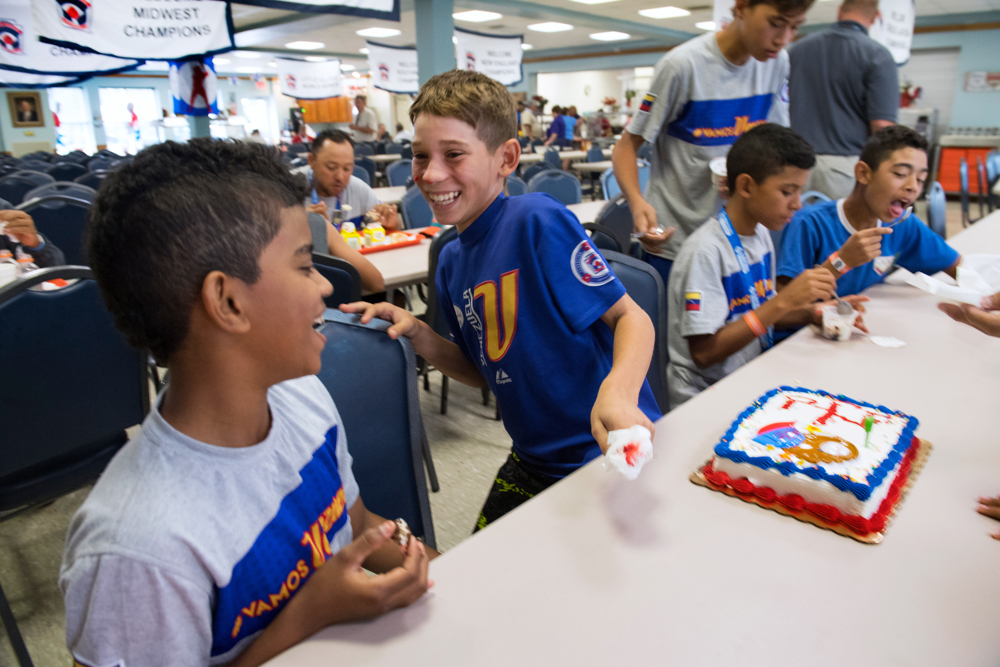 Team Venezuela player Omar Romero, center, laughs with friends after he is surprised with a birthday cake -- adorned with "Feliz cumpleańos," or "Happy birthday" in Spanish -- on his 12th birthday in the cafeteria at the Little League players' complex on Aug. 25. Team hosts make sure to celebrate any birthdays that fall during the tournament. 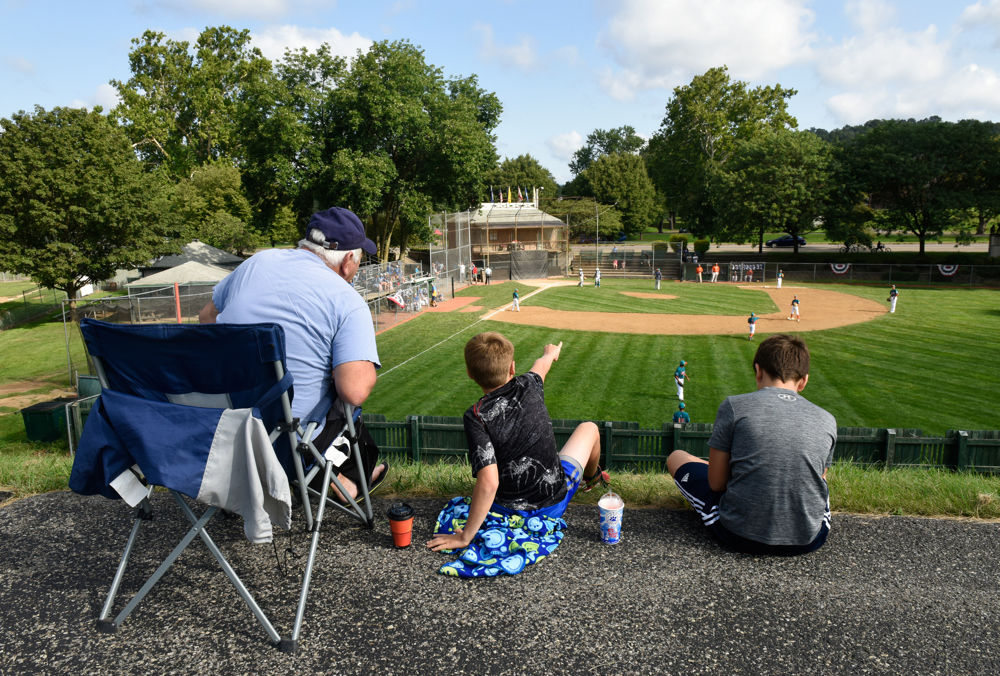 Steve Sheleman of Williamsport watches a game between California and Venezuela along with his grandsons, Mikey Nesbit, 9, center, and Mason Nesbit at Original Little League Field. 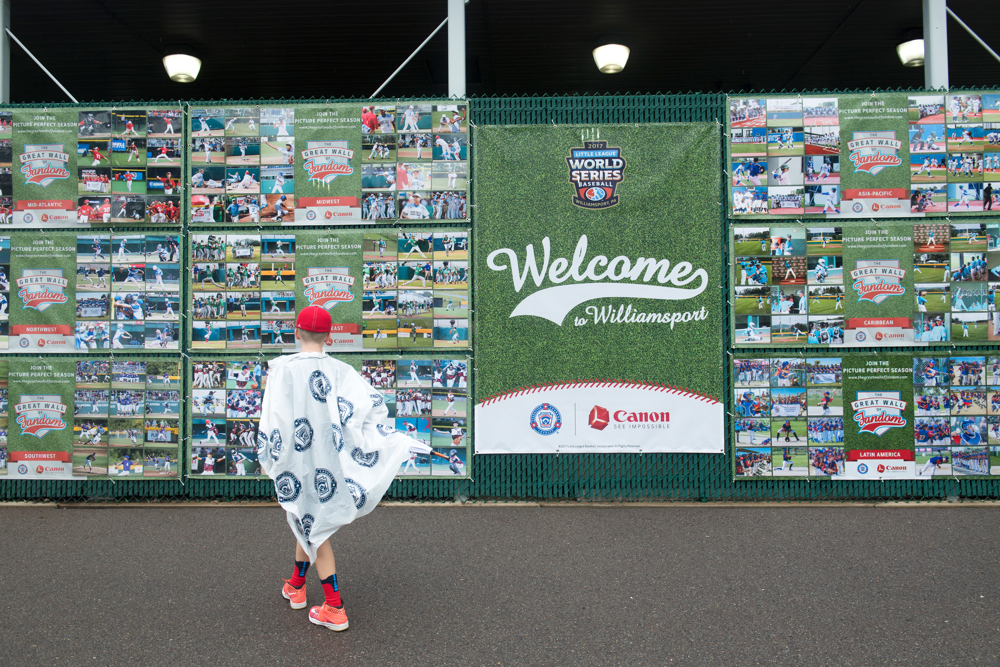 Ben Best of Findlay, Ohio, looks at a display of photos on the Great Wall of Fandom at the Little League World Series. Fans from around the world were encouraged to upload photos of their local Little League games or messages of support, and the images were printed and placed on the wall at Lamade Stadium. 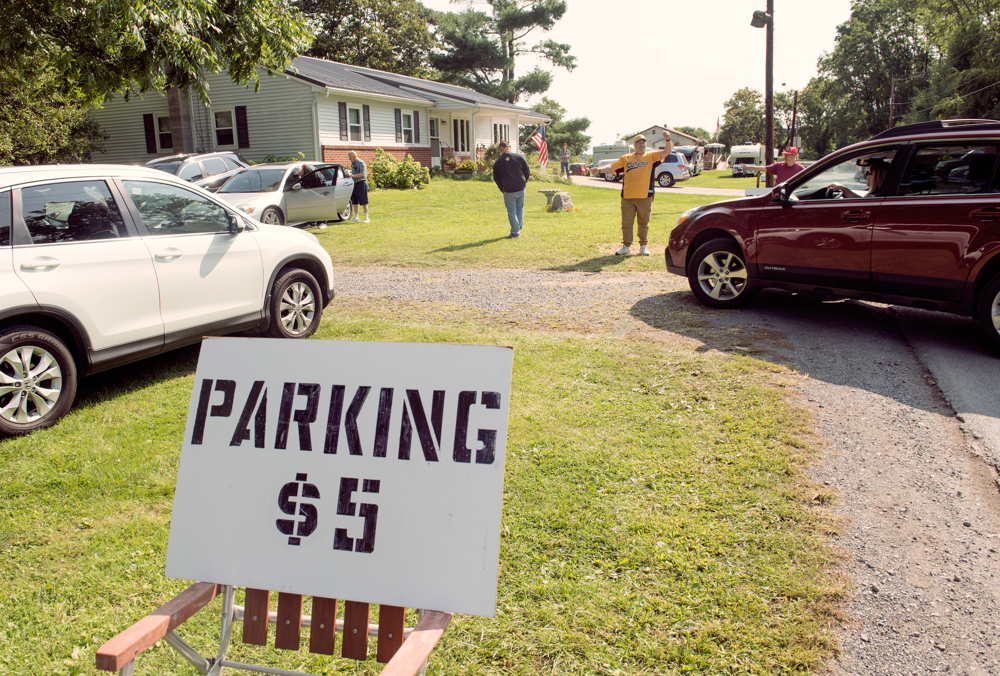 Free public parking is available at the Little League Complex, but it can fill quickly. Some people who live within walking distance of the Little League complex in South Williamsport stay busy during the games by turning their yards into parking lots. Here, Brett Pollack of Ft. Myers, Florida, helps park cars in a friend's yard. 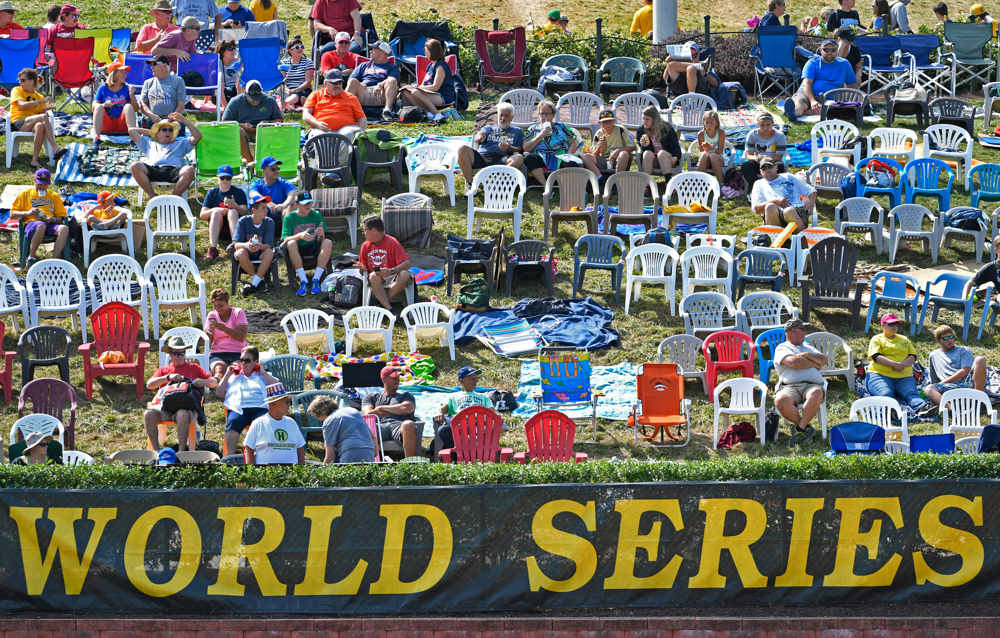 The hill overlooking Lamade Stadium offers prime viewing for games -- but the prime spaces fill up fast. Hours before game time, fans place their chairs on the hill. Total attendance for the 32 games of the 2017 LLWS was 292,208. 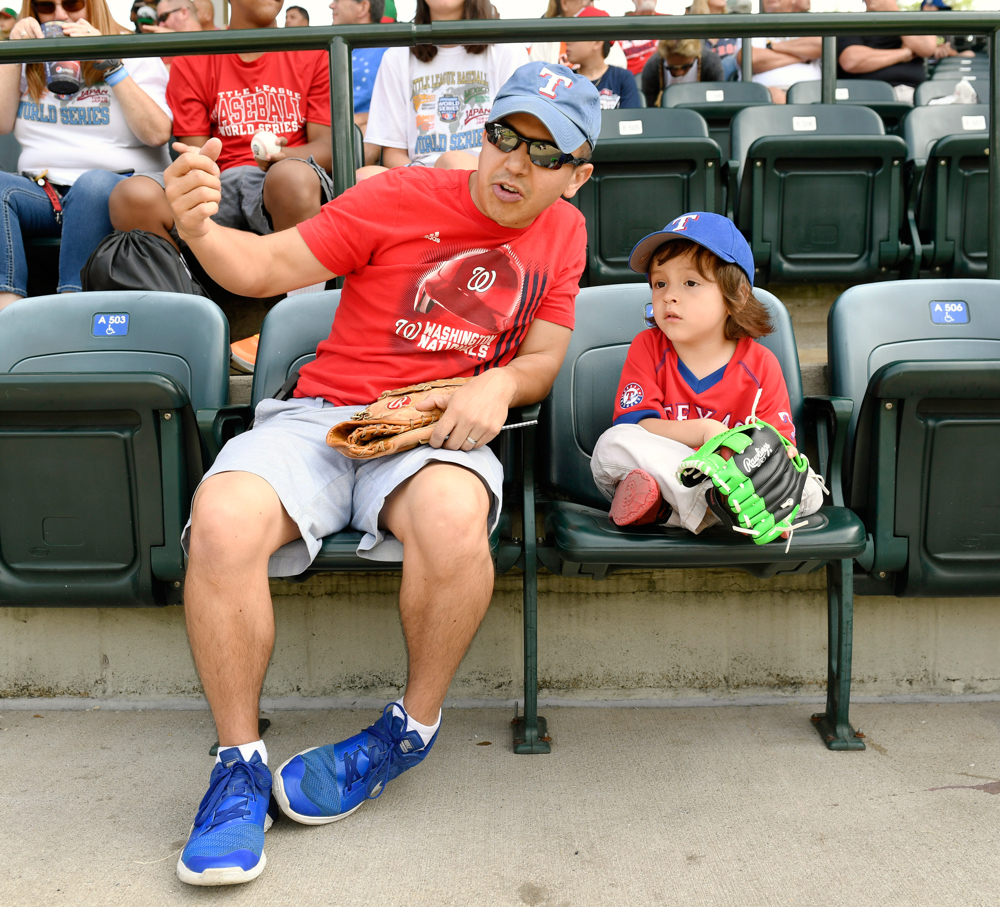 Starting 'em young: Stephen Hernandez of Washington, D.C., talks baseball with his son, Matthew, 4, during the consolation championship game between Mexico and North Carolina on Aug. 27 at Lamade Stadium. 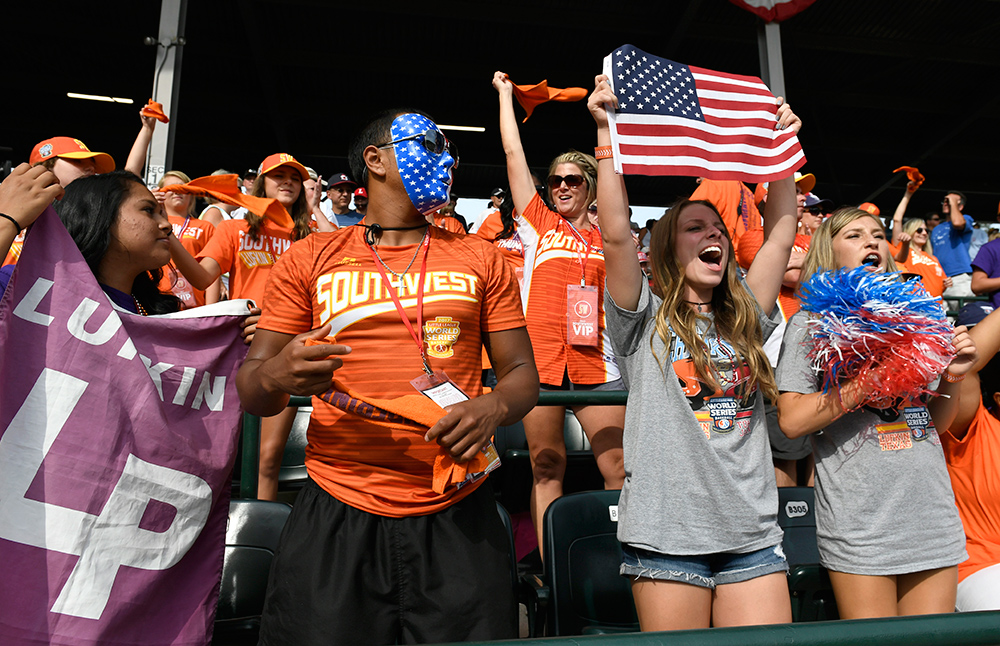 Lufkin, Texas, reached the final against Japan thanks to its six-run comeback victory over Greenville, North Carolina, in the U.S. championship game on Aug. 26. Things looked promising for Texas and its fans after Chandler Spencer crushed the first pitch over the left-center-field fence and Hunter Ditsworth cracked an opposite-field homer down the right-field line to put Lufkin up 2-0 with one out in the first inning. 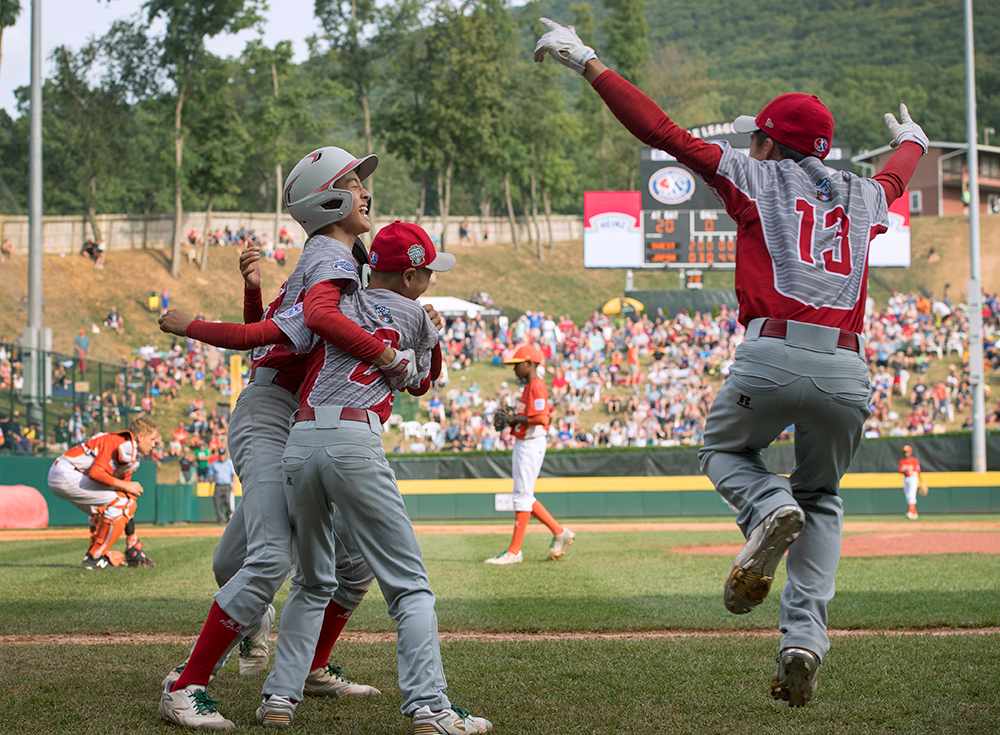 Japan homered three times in the fourth inning of the LLWS championship to turn a tight game against Lufkin, Texas, into a rout -- and Seiya Arai, left, scored the winning run in the fifth inning to defeat Texas 12-2 and seal the title for Tokyo Kitasuna, the club representing Japan this season. 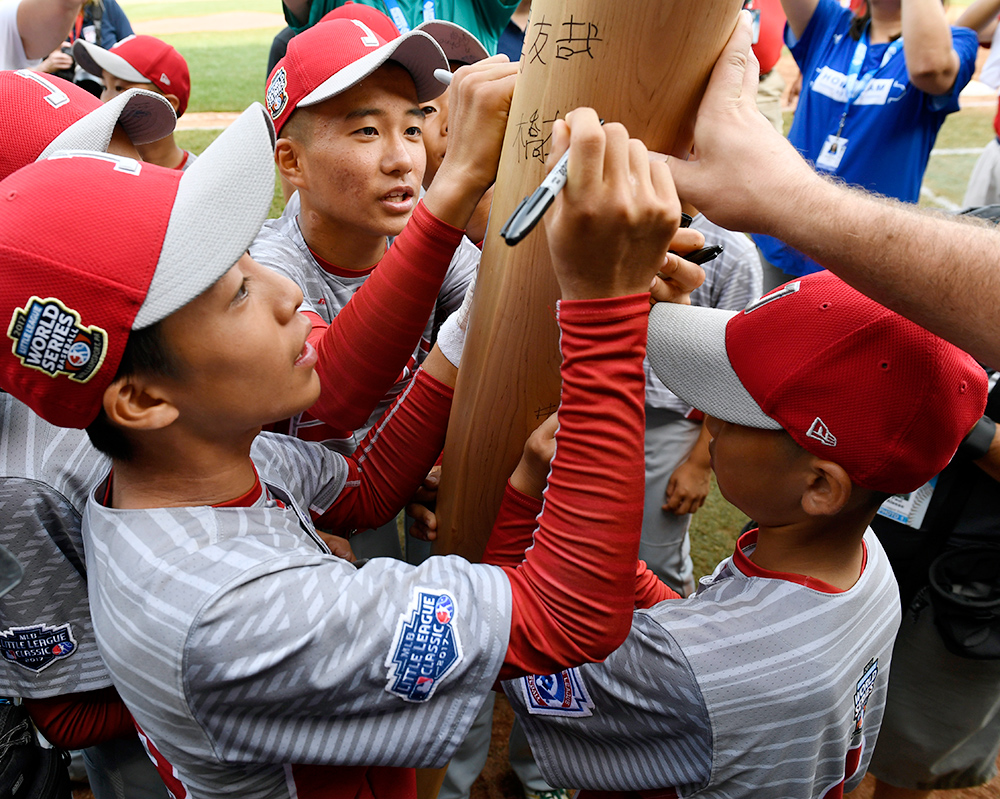