Which teams are in the box seat for the AFL premiership? Without a crystal ball, it's hard to say. But the next best thing to a crystal ball is an Elo ratings model, and the model has good news for fans of the Crows and Tigers.

Before we get to that, a refresher. An Elo system rates teams based on their past results, adjusted for the quality of opponents and home-ground advantage. After each game, a team's rating goes up or down based on whether they over- or under-performed expectations. If the ratings system expected a team to win by two goals, but they win by four, then their rating will go up; if they only win by one then their rating will go down. Easy! An important thing to be aware of is that Elo doesn't know about changes in lineups - if a player gets injured or suspended, a rating will only adjust if or when the club's performance starts to suffer. This turns out to be less important than you might think.

At the end of the home and away season, Elo has the Swans clearly rated as the best in the competition, with a rating of 1671 compared to a league average 1500. They're a little above the Crows in second place, with a still premiership-quality rating of 1638. The one mildly surprising rating might be the Bombers, who are rated only about average, a little below several teams that didn't make the finals. Their narrower-than-expected win against the Dockers dragged them down a little; they were rated 1505 before last round. 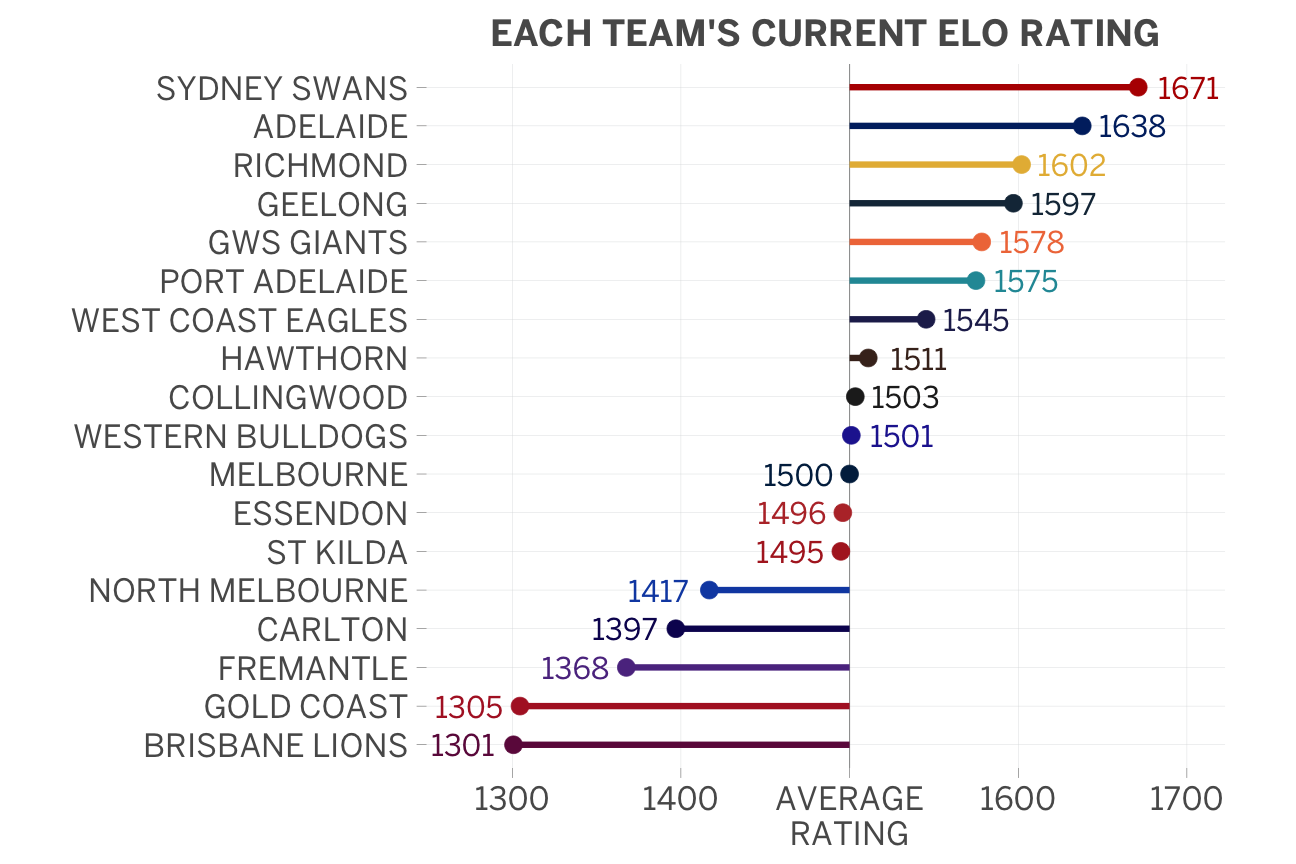 SOURCE: ELO MODEL BASED ON DATA FROM AFLTABLES.COM MATT COWGILL

Using those ratings, and each team's home-ground advantage, we can tip this weekend's games. As you'd expect, the ratings model isn't tipping a blowout in any of them. The Swans-Essendon clash is likely to be the most one-sided, with Sydney about 82 percent likely to win. Port's slight ratings edge over the Eagles, combined with their strong home-ground advantage, gives them a 68 percent chance this weekend. The Crows' chances against GWS are pretty similar, 70 percent, based on their ratings and the advantage of playing at Adelaide Oval. The Cats are 44 percent likely to win against Richmond - that one's pretty close to a flip of the coin. 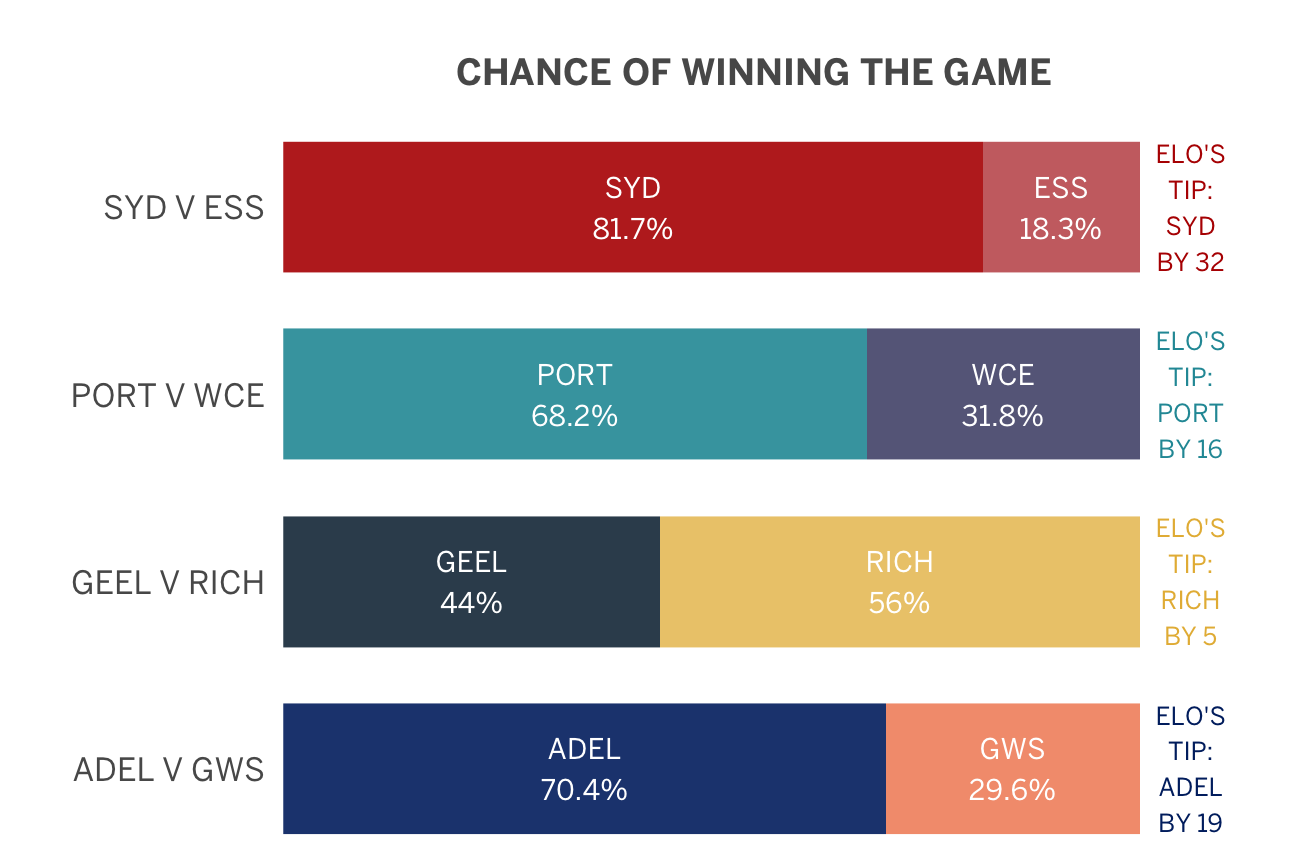 SOURCE: ELO MODEL BASED ON DATA FROM AFLTABLES.COM Matt Cowgill

Using the Elo ratings, we can project how each team's season will go from here. We simulate the season 50 000 times, running through all the ways the finals can end up, to calculate how each side's season is likely to end. 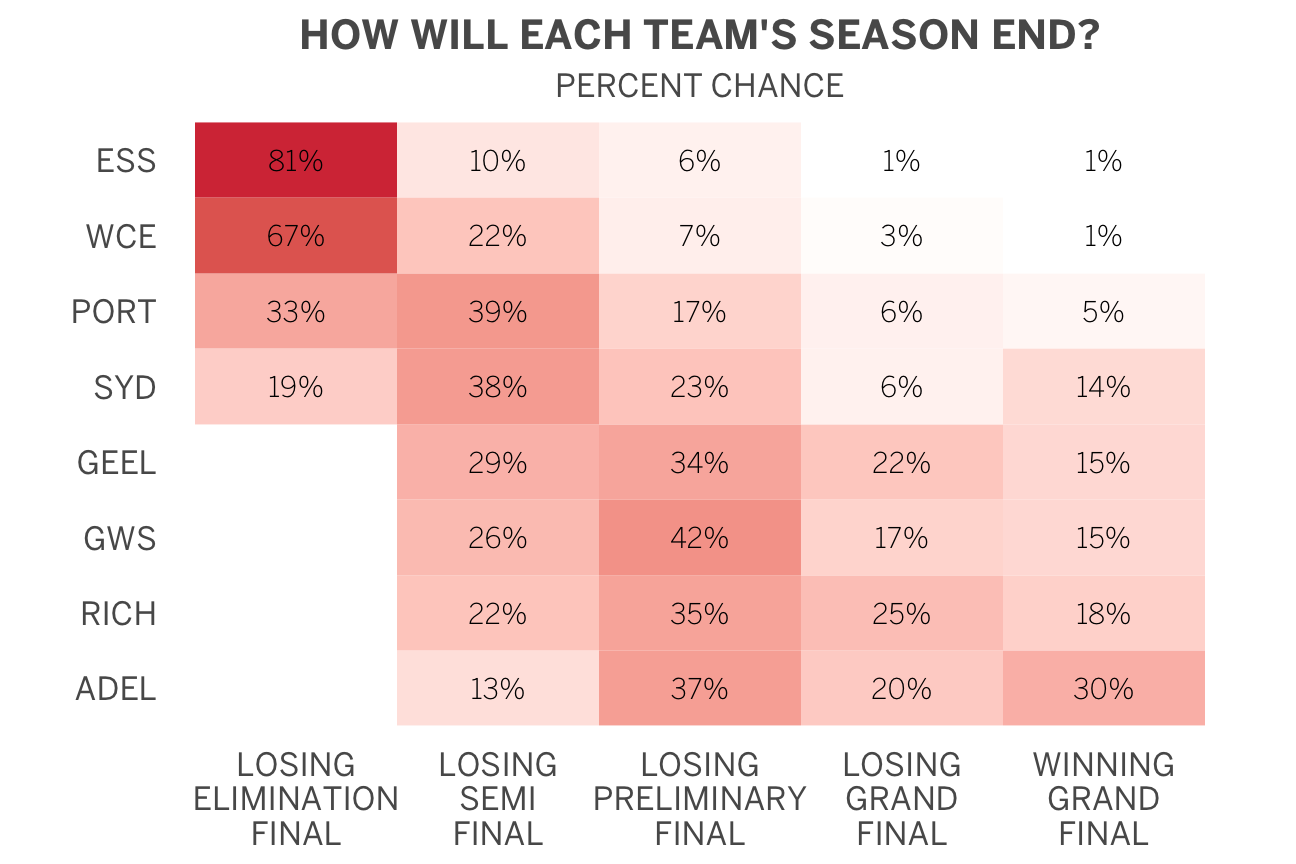 SOURCE: 50 000 SIMULATIONS OF THE FINALS USING AN ELO MODEL BASED ON DATA FROM AFLTABLES.COM MATT COWGILL

Adelaide are the most likely premiers, with a 30 percent chance of their season ending in glory. Somewhat surprisingly, Richmond are the next most likely, with an 18 percent shot. Both Geelong and GWS are 15 percent likely to win it all from here. The Bombers and Eagles each only have a one-in-a-hundred chance of winning it all, with their seasons most likely to end this week or next.

Sydney's low probability of winning the premiership might seem a bit strange. Despite the Swans being rated the best team in the league, they have only a 14 percent chance of ending up as premiers - finishing the regular season outside the top four is still a big impediment to success in September. If anyone's going to emulate the Bulldogs by winning the flag from outside the four, it's likely to be Sydney, but there's still a five-in-six chance that Sydney will miss out.

Perhaps the most striking thing about these results is how open the season still is - even though the Crows are the clear favourites, there's still a 70 percent chance that someone other than Adelaide will win. Still, the Crows feature in most of the likely grand final matchups. 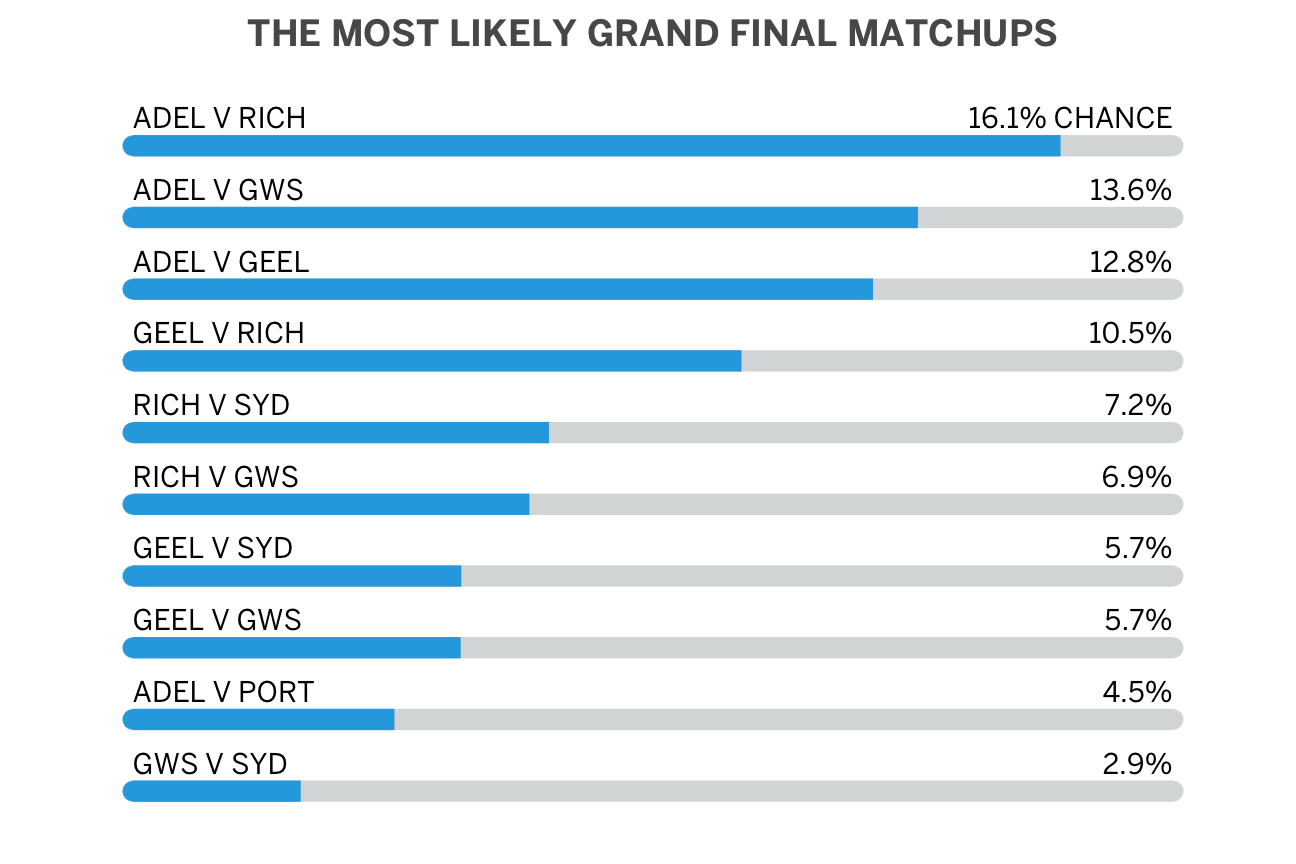 SOURCE: 50 000 SIMULATIONS OF THE FINALS USING AN ELO MODEL BASED ON DATA FROM AFLTABLES.COM MATT COWGILL

The most likely grand final matchup is the Crows against the Tigers - that's about 16 percent likely to happen. The next most likely scenarios see Adelaide line up against GWS or Geelong - each of those has about a 13 percent chance of coming to pass. Of the 26 different matchups we could see in the last game of the year, the least likely is seventh vs eighth, the Bombers against the Eagles, which has only a one-in-a-thousand chance of coming to pass.

There are a lot of ways this season could go, but Crows and Tigers fans should be feeling cautiously confident.