Editor's note: Bunchie was featured in the "NFL Next 100" spot to open up Super Bowl LIV between the San Francisco 49ers and the Kansas City Chiefs. The commercial was designed to highlight the NFL's 100th anniversary celebration and ends with Young running on the field before kickoff. He's currently 12 years old and living in Los Angeles -- and, of course, still has aspirations to play in the NFL.

When Los Angeles-based trainer Mike Evans talks about Maxwell "Bunchie" Young, it can seem like he's describing any number of top college football recruits. He praises his speed, his work ethic and personality.

"Bunchie is a kid that comes around once every 10 years," Evans said.

In this case, that's quite literally true. Bunchie is only 10 years old.

Despite his age, Bunchie already has scholarship offers from Illinois and one mystery Pac-12 team, according to Evans, who trains more than 150 youth athletes at his LacedFacts Training center in Norwalk, California, a suburb of Los Angeles. It's only a matter of time, he says, before college coaches all over the country know who Young is, along with discovering several of the other kids he works with at his facility.

Kids like Havon Finney Jr., who, at 9 years old, has an offer from Nevada and an Instagram following of nearly 22,000. Kaleb Herndon, 6, doesn't have any scholarship offers, but Evans insists he has schools looking at him already because "he looks like a 9-year-old" and his parents are 6-foot-1 and 6-foot-7.

The buy-in isn't widespread -- why would a coach spend time recruiting a kid who can't sign a letter of intent for another decade? -- but Evans said that's changing.

"A lot of these schools are not hip to it yet because you still have a lot of old-school coaches at programs," he said. "It's the new wave that's going to change things. It's people who came from the computer era and the social media age that are going to change things. We're the first to do what we're doing where kids are getting official offers."

Hype and highlights aside, here's what life looks like for a 10-year-old college football prospect. 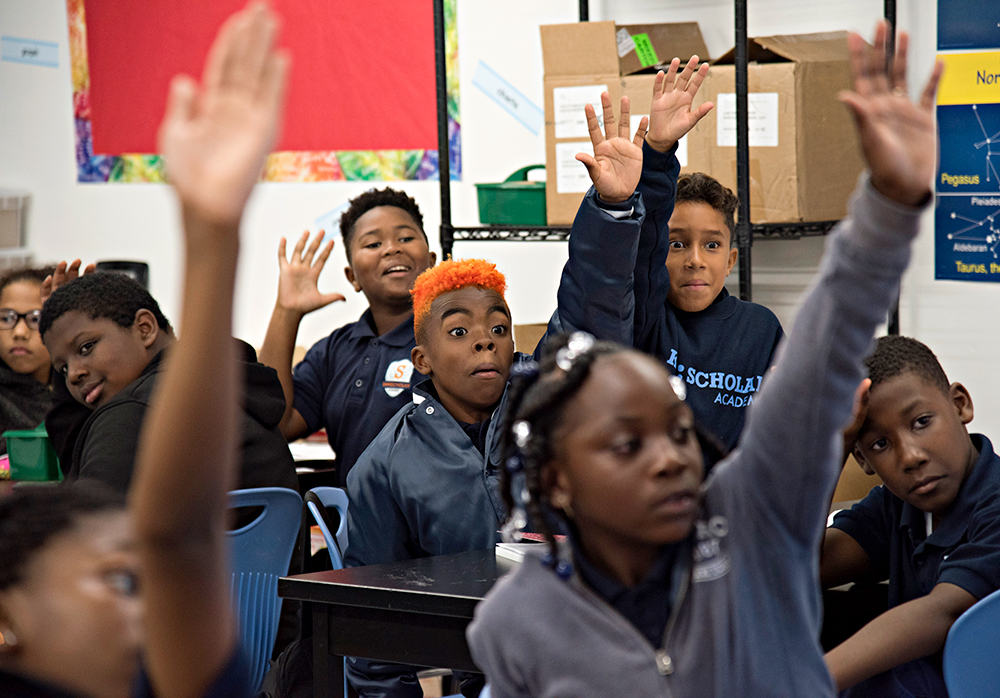 Bunchie (center, orange hair) and his classmates raise their hands, hoping to be chosen as a helper during class. Bunchie is in the fifth grade at KIPP Scholar Academy in South L.A. Although he frequently changes his hair color, school administrators recently asked him to dye his hair back to tone it down. 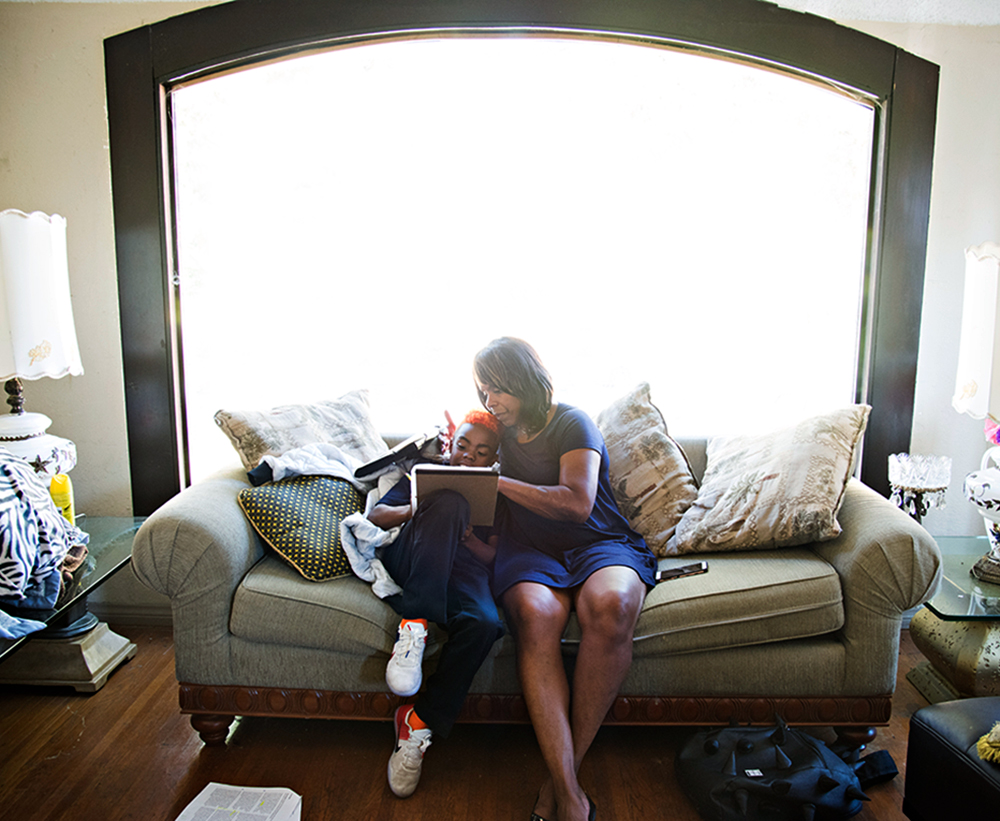 Though his parents are divorced, Bunchie still sees them both almost every day. He currently lives with his dad because of his intense game, practice and training schedule, but his mom, Laura DeShazor-Dunn, uses her hour-long lunch break every day to pick him up from school and help him with his homework. 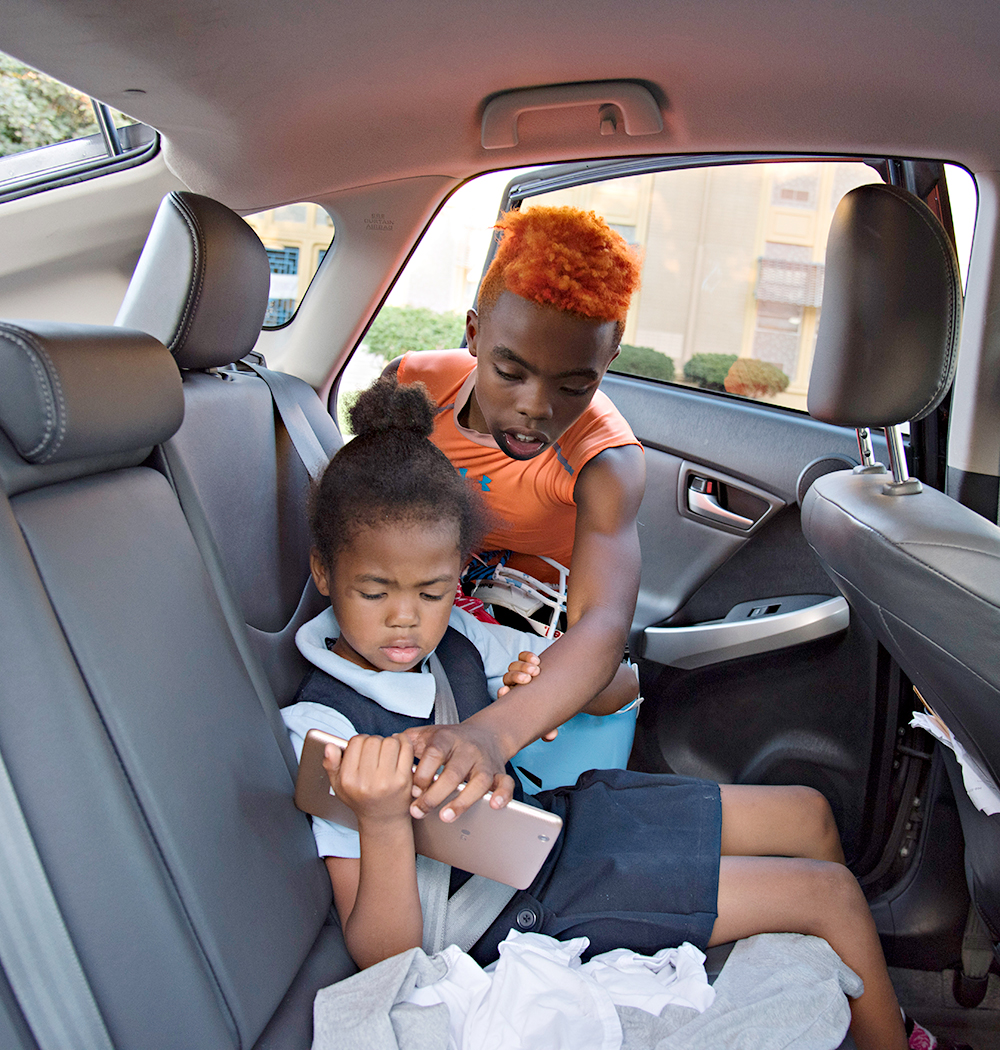 Bunchie helps his 4-year-old sister Maxine figure out how to play a video on a tablet. Maxine usually goes to all of his training sessions and hangs out at Bunchie's practices and games. 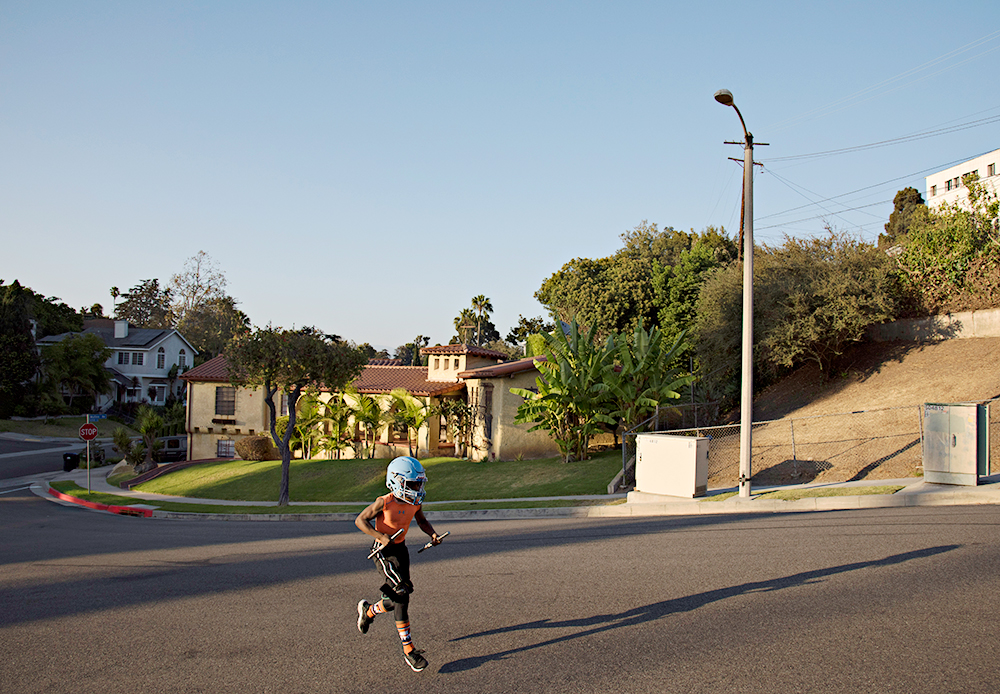 With weights in hand, Bunchie runs hills while training. Evans, the trainer, says that in his mind, it's easy to project a young player's talent based on players he knew. "Growing up seeing [Oregon and Kansas City Chiefs star] De'Anthony Thomas, he has always been a special athlete," Evans says. "Nothing really changed." 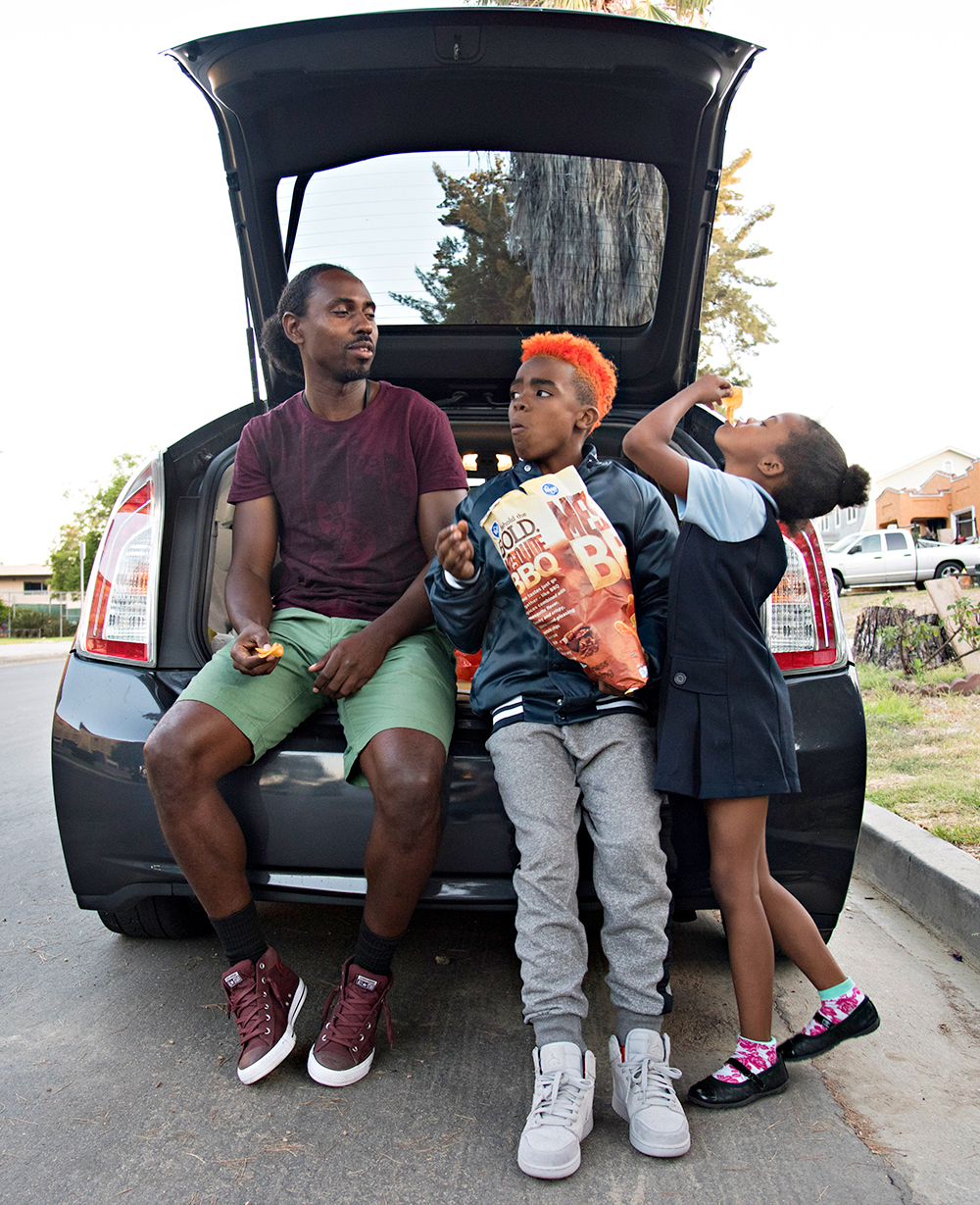 After training with speed coach Jonathan Ligons, Bunchie does a quick change into clothes for Bible study and snacks on some potato chips with Maxine while talking football. 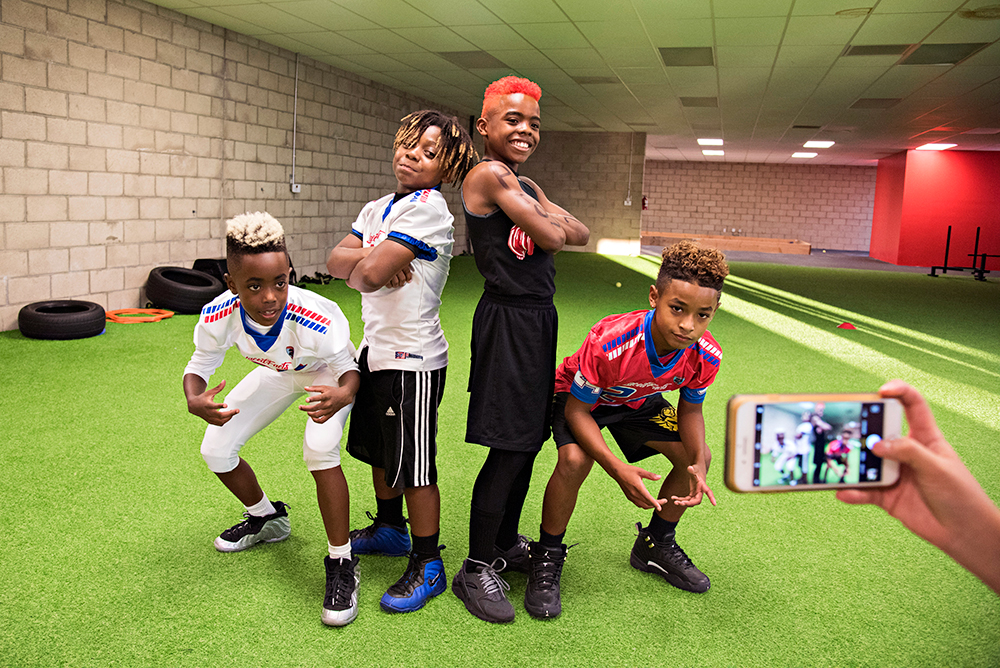 From left to right, Ca'ron Williams, Champ Brown, Bunchie and Therman "Boogie" Williams pose for pictures for their moms after training at LacedFacts. "All of them are well-known to college scouts," Evans says. 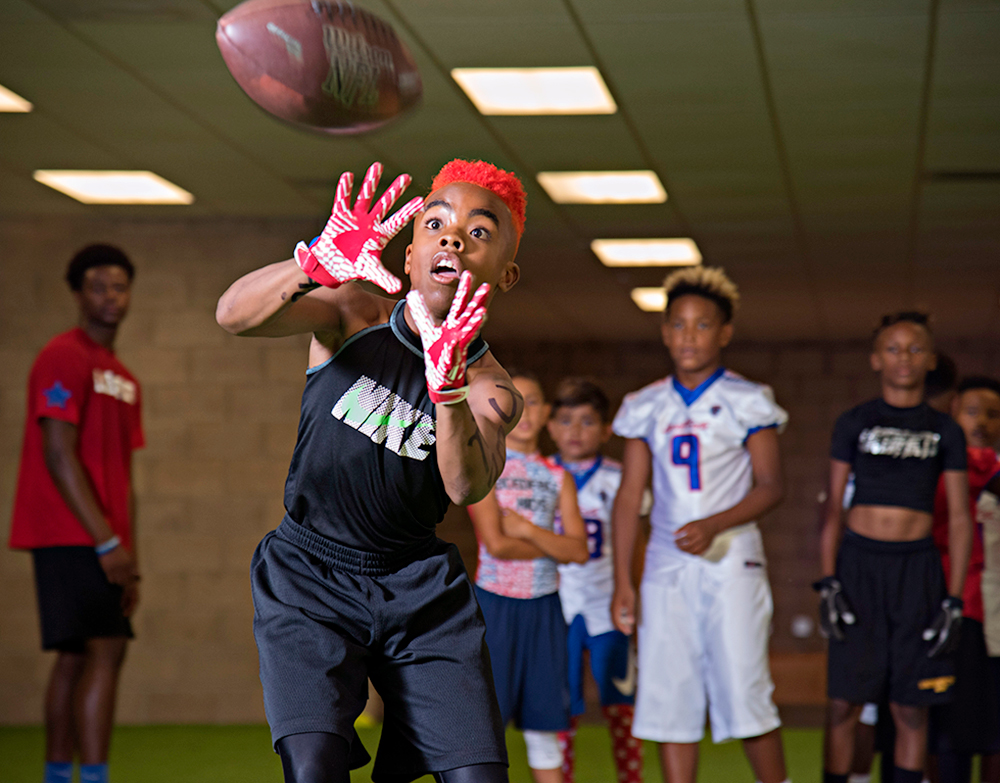 Bunchie works on his ball-handling skills during rapid-fire drills at LacedFacts. Evans understands the skepticism around his young prospects, but says his process gives greater insight for coaches than just seeing a high school player's highlights. "If your profession is to look for top athletes, for me, I want to see them young," Evans says. "I want to see what they go through and how they overcome. That's what measures a good athlete and a good person. You can look at a lot of kids through video and not know the character they have." 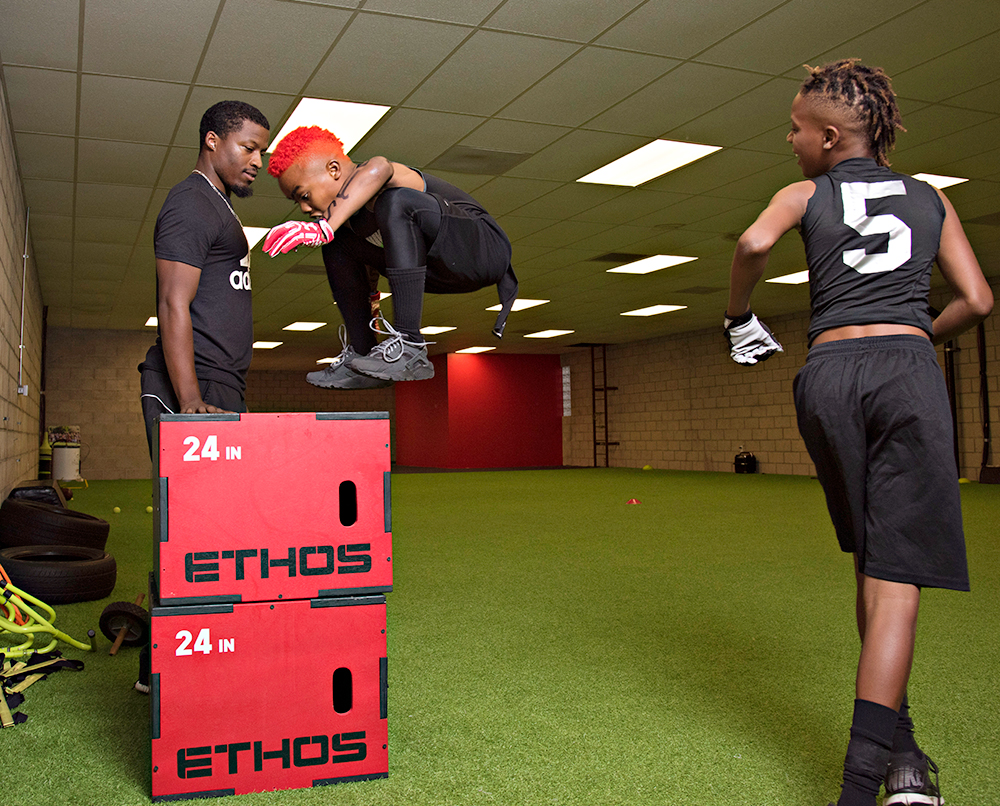 Bunchie clears 32 inches on a box jump with room to spare while he and 9-year-old Havon Finney Jr. train with Evans. Bunchie and Finney have been playing football together since they were toddlers. 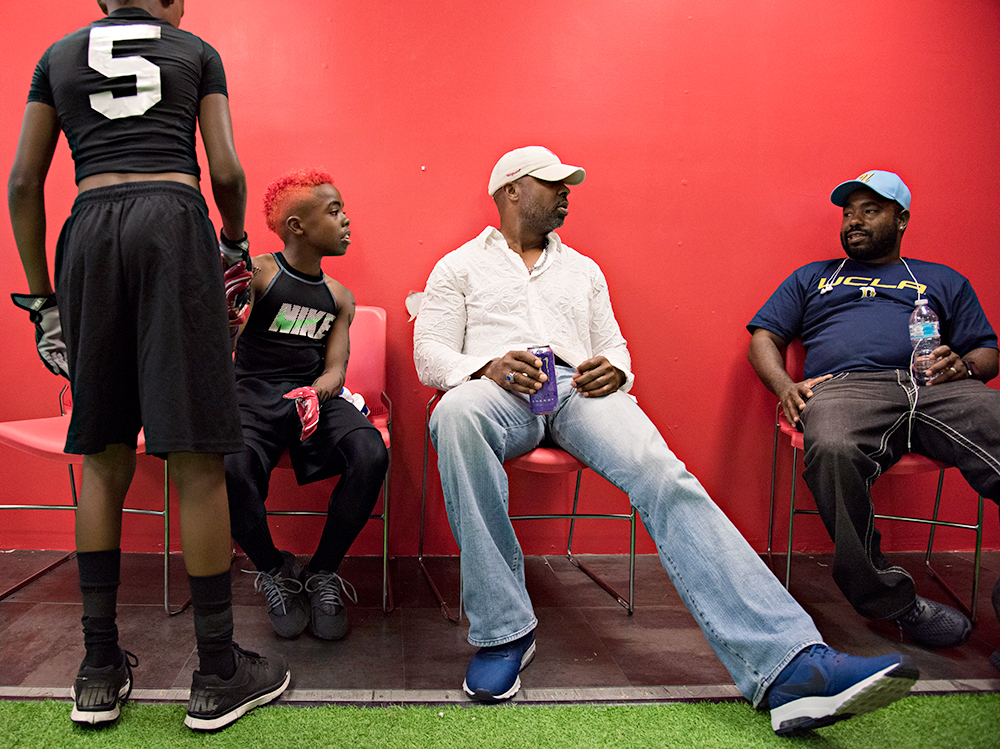 Dave Young, Bunchie's father, hangs out with Bunchie and Finney after training. 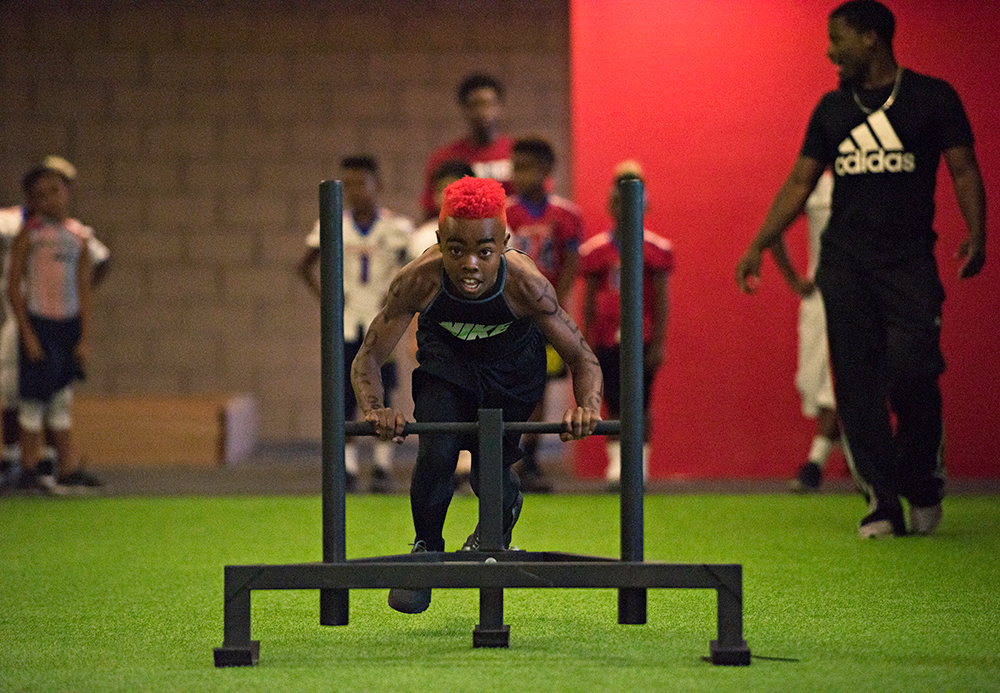 Evans, talking to players while Bunchie pushes a sled, has 150 kids in his training program. "We hand-select these kids that dominate," he says. "They're Bunchies wherever they are." 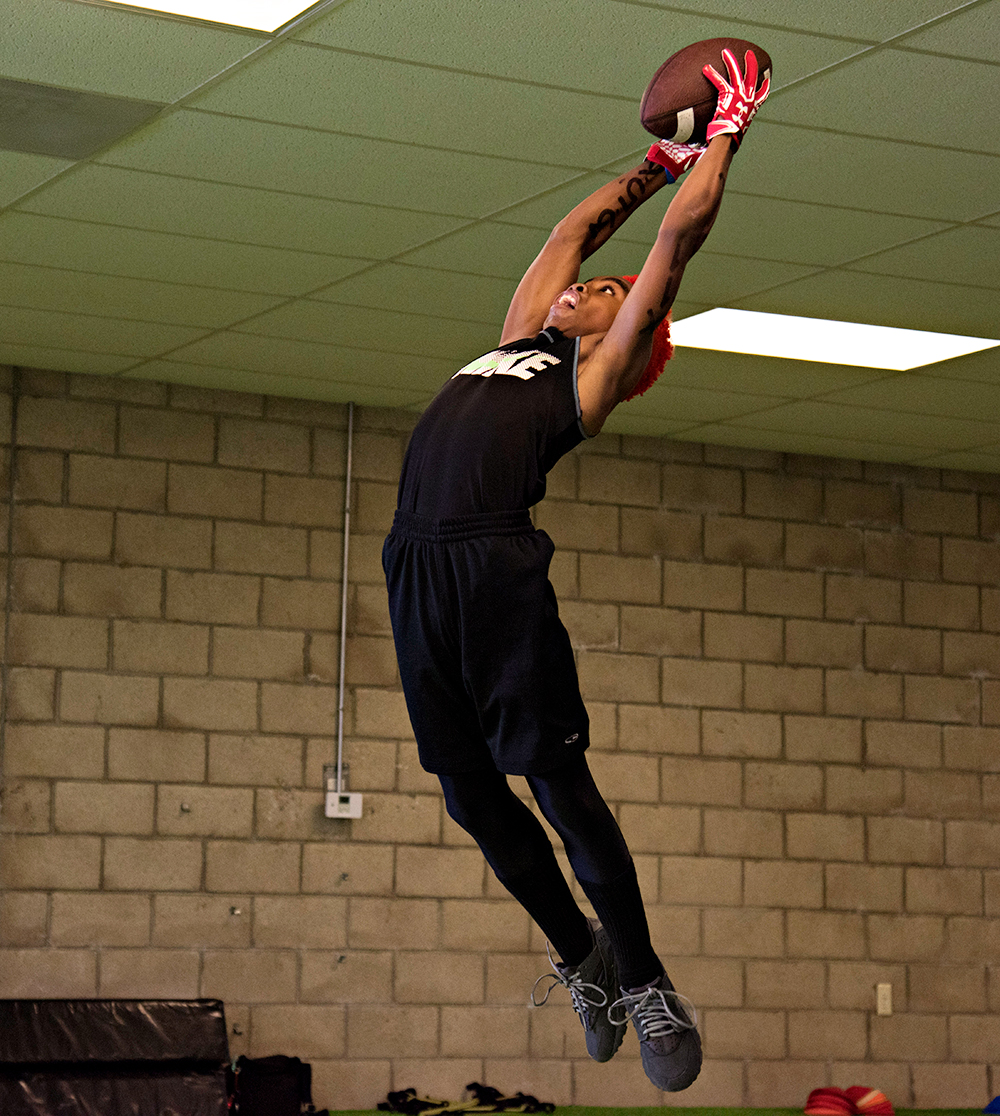 Evans said a lot of the attention his players receive comes through social media. "They're doing things that have never been seen," Evans says. "It's probably what you would have seen from Odell Beckham at a young age. Like, 'Wow who is this guy?'" 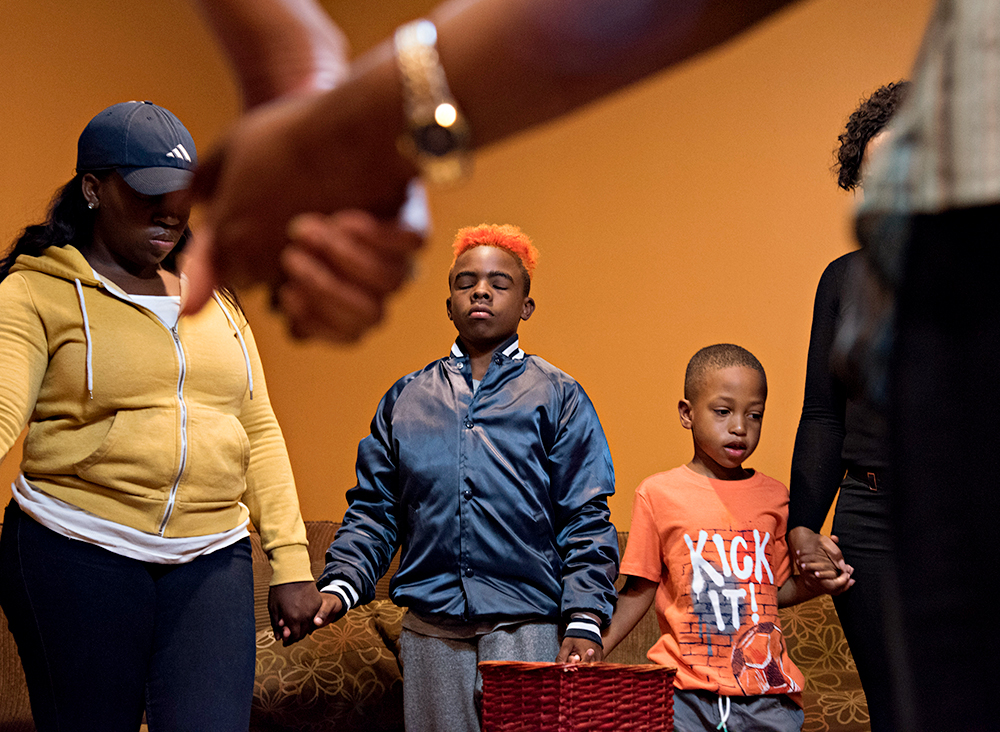 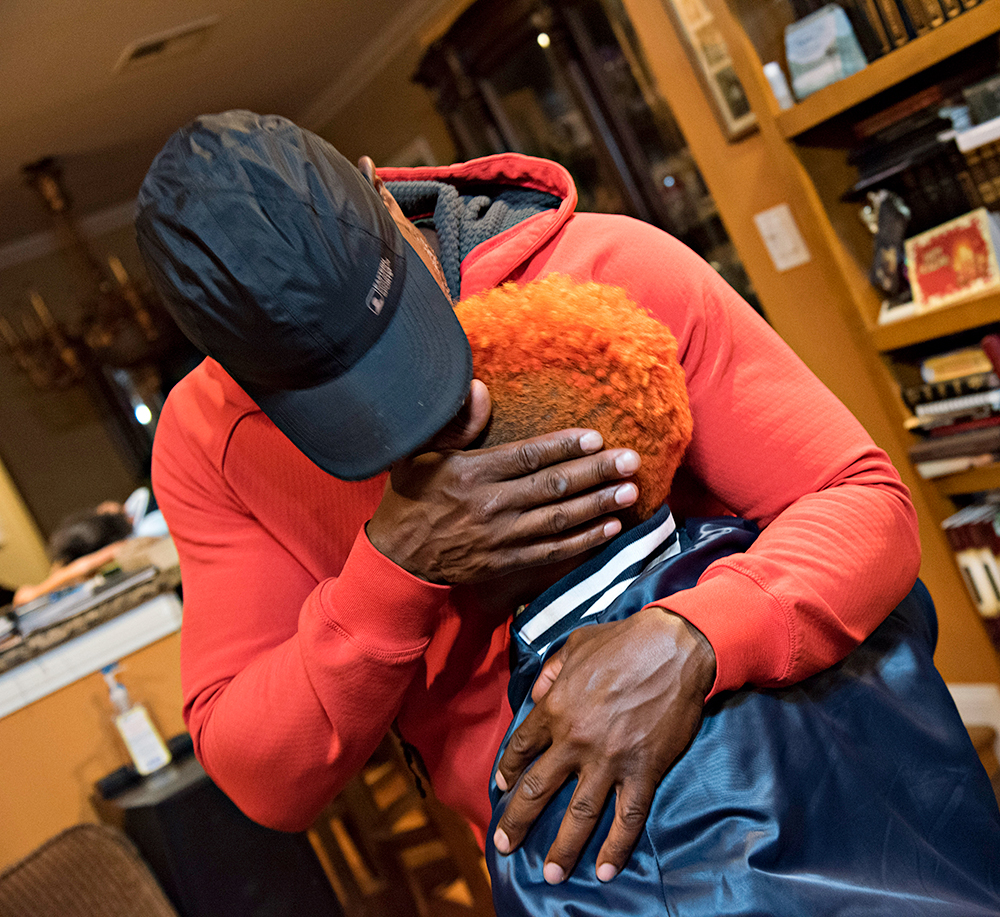 Bunchie's dad embraces him after the hour-long Bible study class. Faith and football are the two biggest components of Bunchie's life. 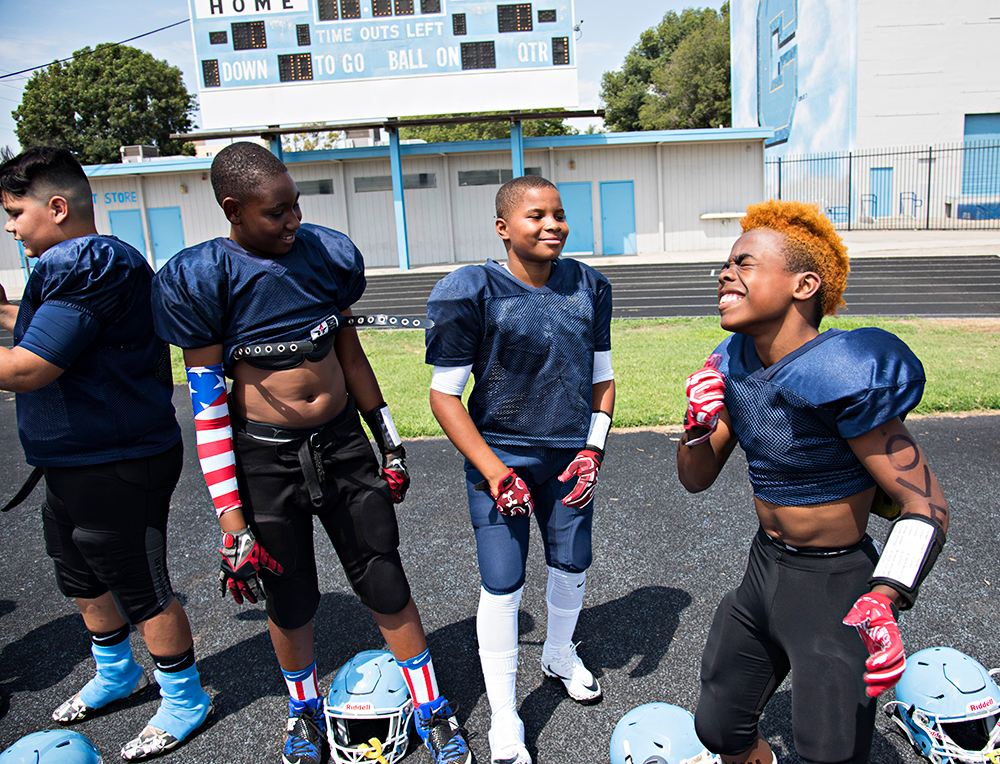 While waiting to have their equipment checked before a game, Bunchie and his Hub City Tar Heels teammates practice their end zone dances. 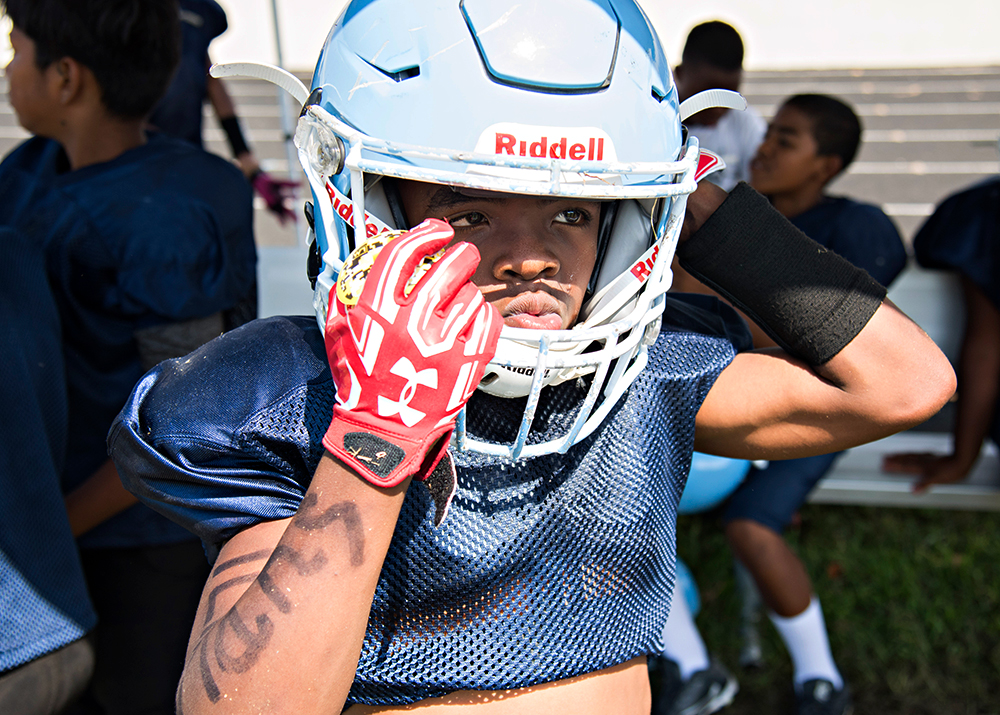 Bunchie snugs his helmet over his head as he stares toward the playing field. 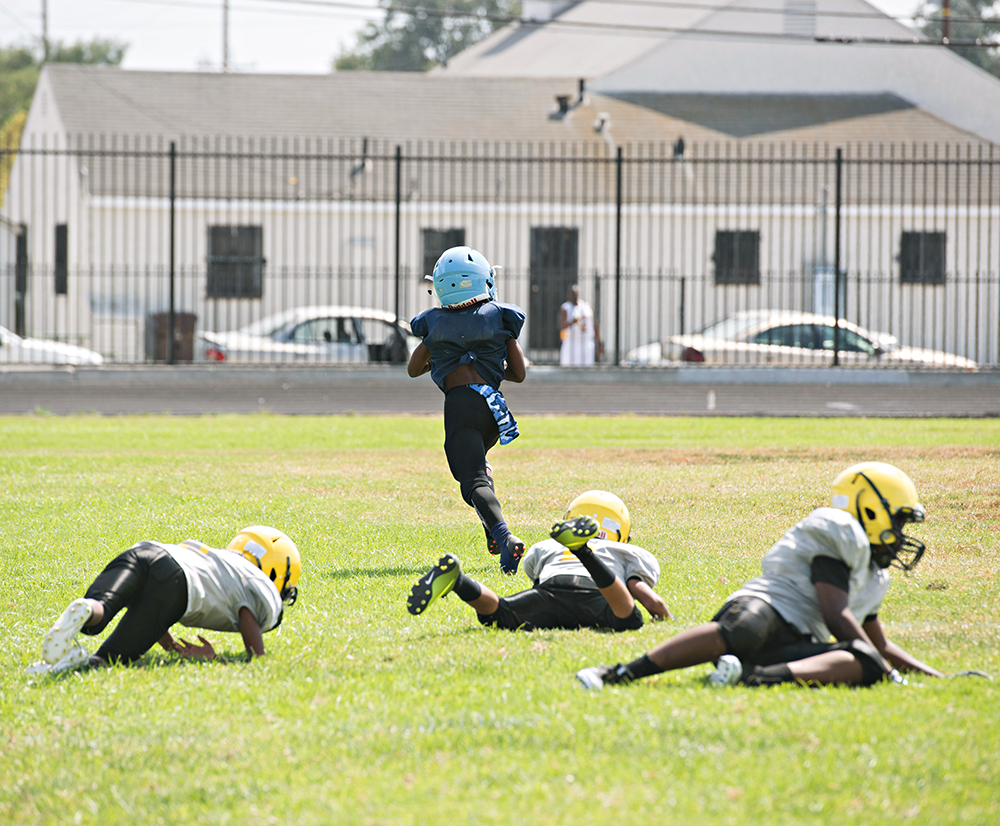 Bunchie leaves three Cerritos Vypers defenders in the grass as he scores one of his three touchdowns. 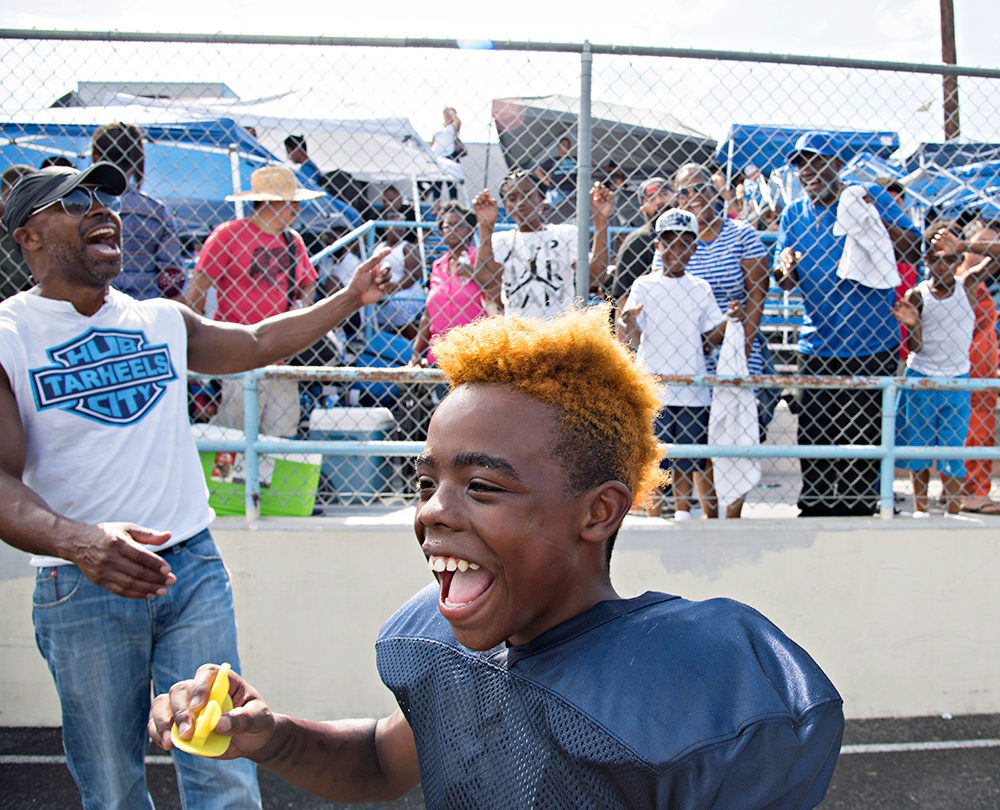 Family friends come down from the stands to greet Bunchie and his dad after the game. 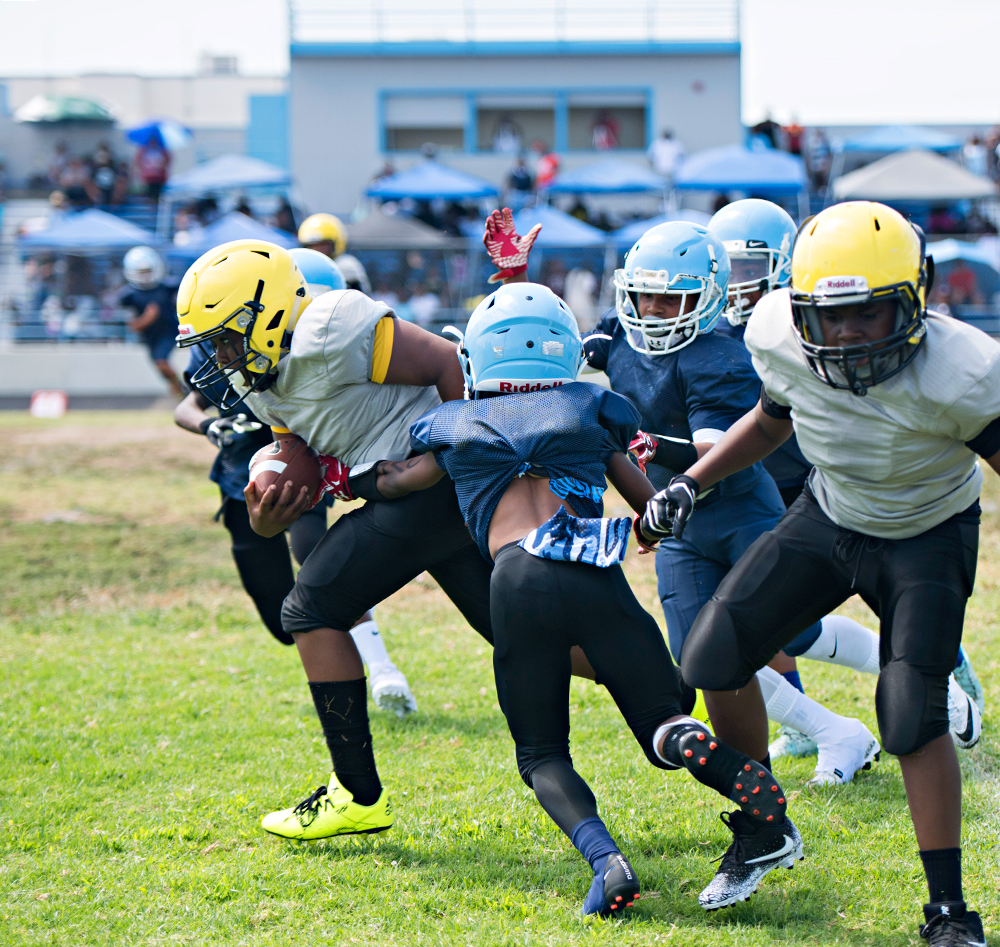 On defense, Bunchie makes a tackle against a Cerritos running back. 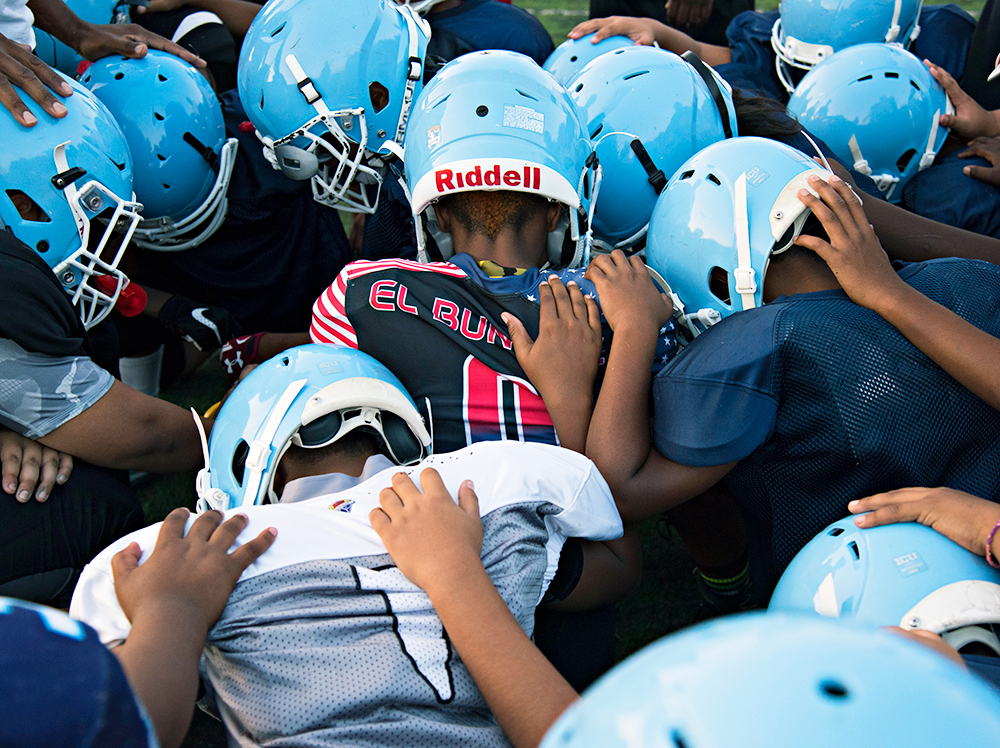 Before another practice, the Hub City Tar Heels kneel and pray before taking the field. 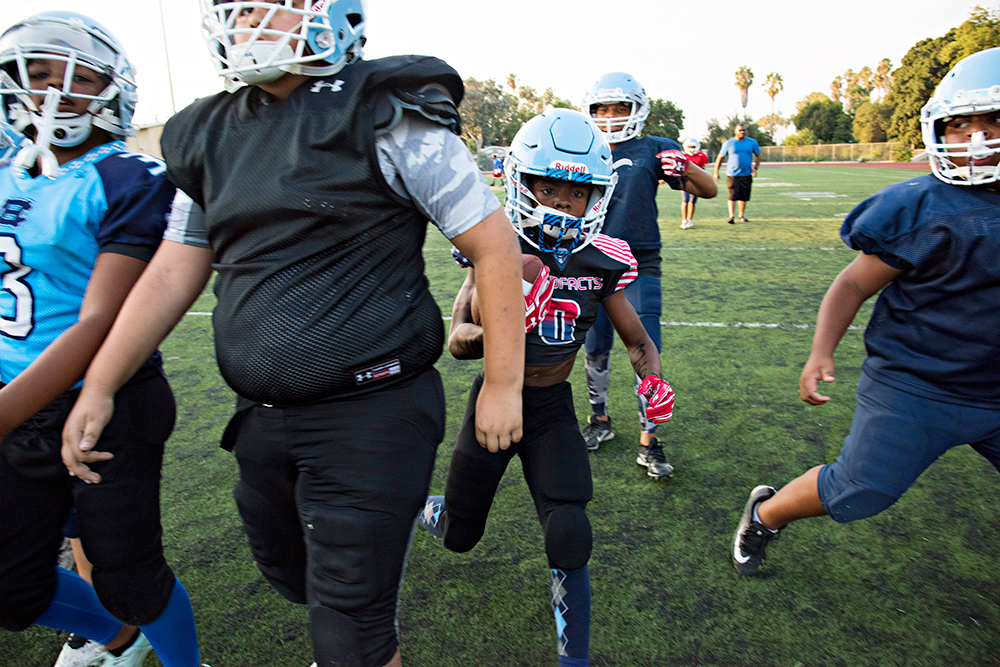 The Tar Heels practice a walk-through of a running play, opening a hole for Bunchie to hit. 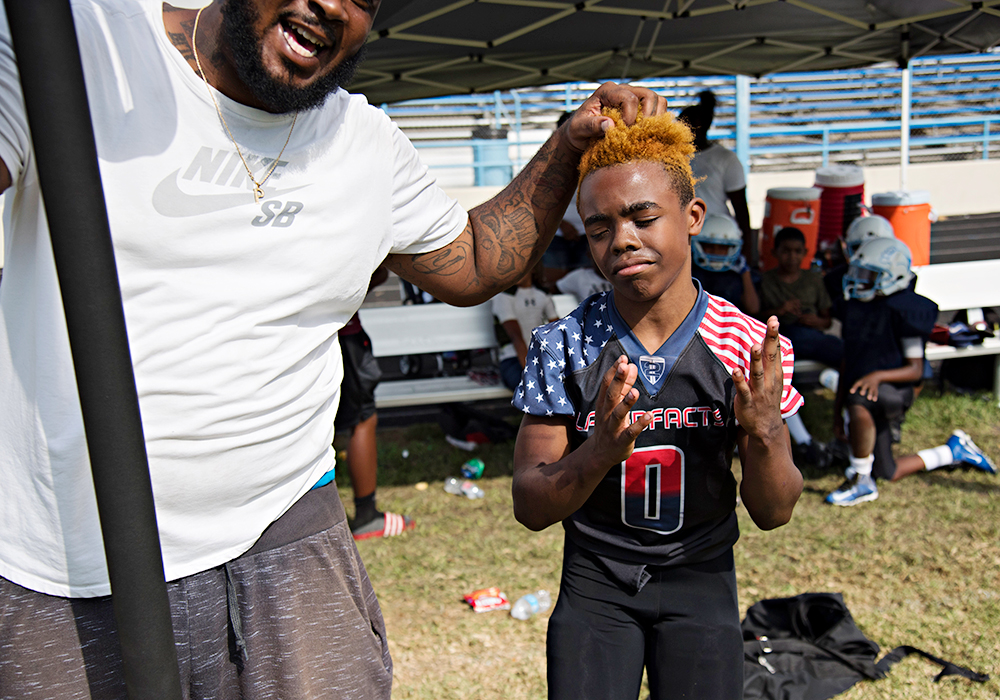 After the Tar Heels' win over Cerritos, Bunchie asks his his dad if he could stay and be the waterboy for the under-12 team. While standing on the sidelines, a member of the chain crew playfully picks on Bunchie's hair asking what color it is naturally. "I think it's this hair that makes him so fast," he joked. 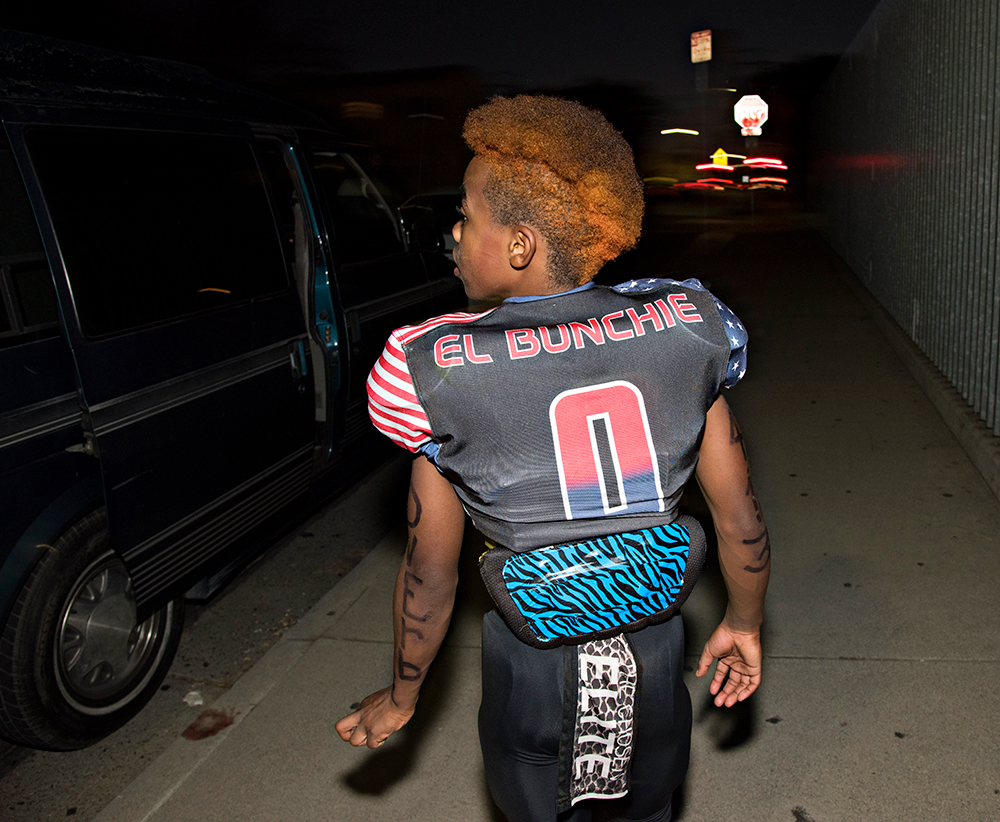 Bunchie walks home after his team's practice at Crenshaw High School, which is just blocks from his house, while his dad and sister follow. "He's a great kid. That right there will take him further than football will," Evans says. "On the athletic side, his ability is second to none."