Imagine swinging as hard you can at a ball unseen, running full speed toward a buzzing base you can hear but not see, and throwing yourself to the ground, diving toward a ball hit in your direction with only beeps guiding you to make the play, the sounds growing louder as the ball gets closer to your face. Beep Baseball is a game of no fear.

Standing a mere 20 feet from home plate, pitcher Jon Walker with the Colorado Storm uses a cadence as he shouts words of encouragement to the batter and yells "Ready, ball!" as he unfurls the beeping ball over the plate.

Beep Ball is essentially a modified game of baseball or softball, using a ball that emits a beeping sound. After the batter hits the ball, one of the two bases -- first or third -- emits a buzzing sound, and the runner must reach that base before a fielder can secure the ball. If the fielder can control the ball and hold it off the ground before the runner reaches the base, it is an out. If the runner successfully reaches the base before the ball is secured, they score a run.

The pitcher and the catcher are on the offensive team and are the only ones on their side who can see. On the defensive side of the ball, there are sighted spotters in the field to assist the players and try to keep them safe from collisions and line drives. The rest of the team must rely on their ears as they try to catch the ball and put the runner out.

Walker's teammate Ethan Johnston was named a defensive All-Star for the National Beep Ball Association World Series and says, "Listening and tracking the ball is my strength. When it hits on the ground, I can pounce on it like a lion on a wildebeest." When he is in a rhythm with his pitcher, he says there's nothing like the satisfaction he gets when "you get a money pitch, and you can hit it and launch it. The freedom to bust out of home plate, to get to the base and knock it down and hear 'Safe!'"

Pitcher Jon Walker of the Colorado Storm yells "Ready, ball!" as he unfurls the beeping ball over the plate. In the 2009 National Beep Baseball Association World Series, Walker took a line drive to the side of his head, so he now wears a helmet with a protective mask. "Generally you take two or three shots in a game; that ball comes back in a hurry," he says. "You've got to have no fear." 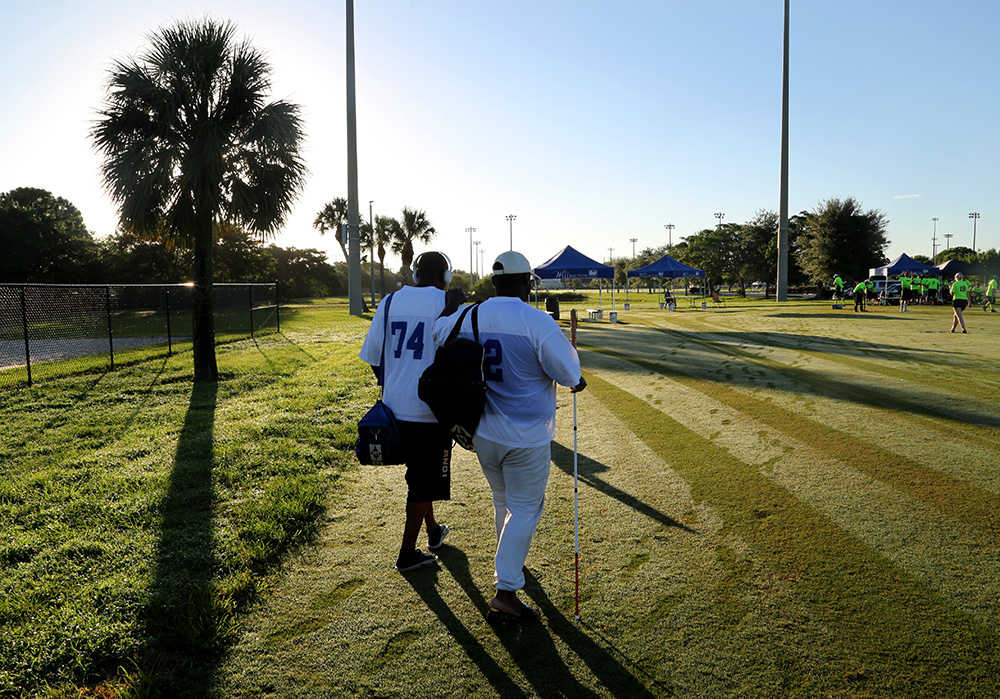 As they arrive on the field in the morning, Mike Jackson, No. 74 for the Storm, leads his teammate, No. 2 Demetris Morrow, as they get ready to compete in the World Series. All of the players are visually impaired but have varying degrees of sight. Some can see a little, and others cannot see at all. Jackson says he is one of two players on the team who have the most sight. Because he can see more than others, he often helps lead the other players. 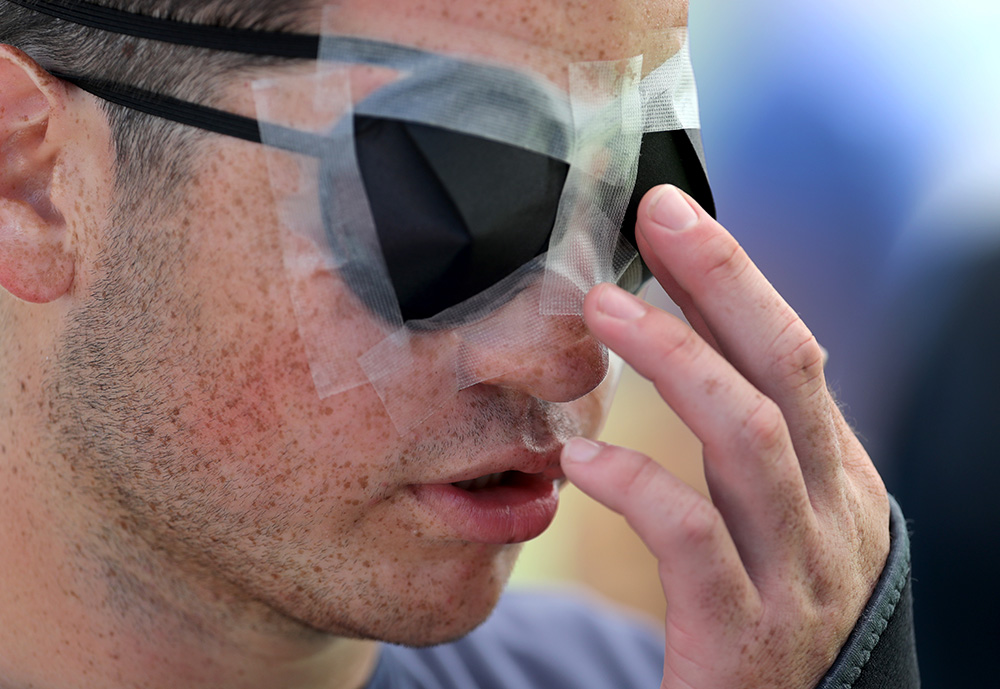 Erik Rodriguez of the Indy Thunder checks the tape on his eye patches before the final game against Taiwan. If an opposing team suspects a player might be peeking -- or wants to psych a player out -- it can request the player have patches taped over the eyes. A blindfold is then placed over the eye patches. 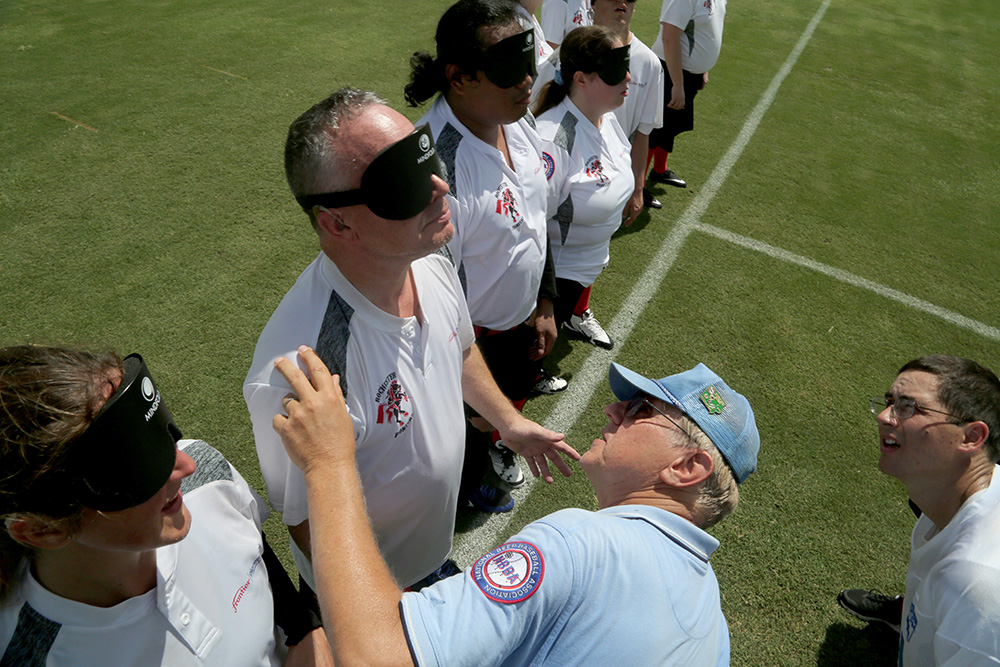 Plate umpire John Lykowski Sr. and Storm co-head coach Jimmy Peng check the blindfold of Rochester Pioneers player Tom O'Brien and the rest of the team before their first game. 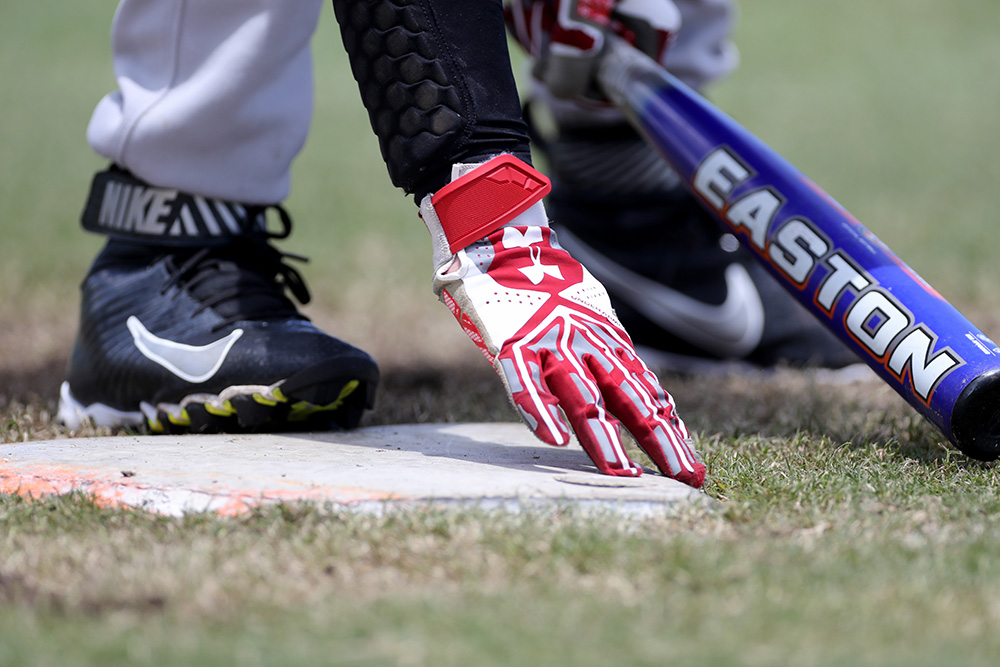 Guy Zuccarello of the Boston Renegades steps up to the batter's box and reaches down to feel home plate in order to get his orientation and stand in the right spot to swing at the beeping ball. 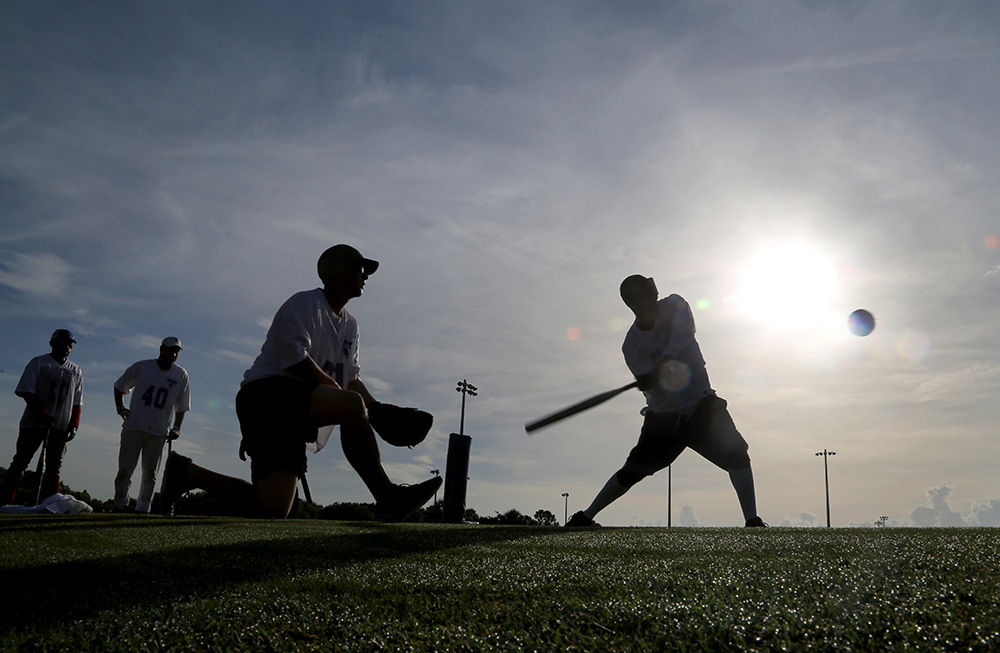 Jimmy Peng lines up behind the plate as Brent Erickson takes a swing during batting practice before the Storm's game against the Caribbean Hurricanes. 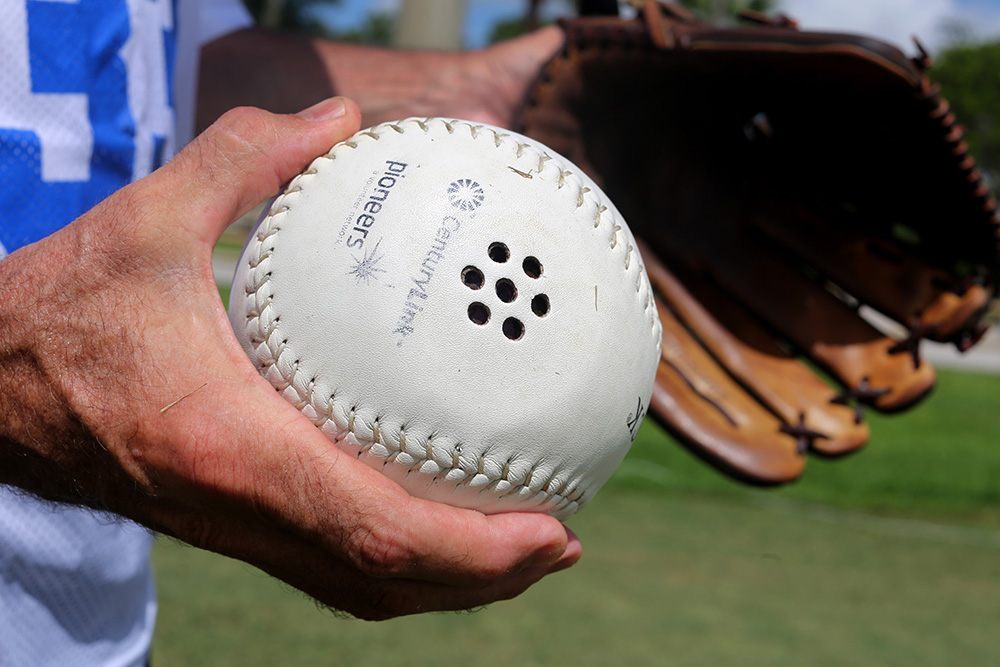 The ball used for the sport is an oversized softball with a speaker inside that beeps.

If the pitcher is hit by the ball, it is declared a "dead ball." Storm player Ethan Johnston says when he is in a rhythm with his pitcher, there's nothing like the satisfaction he gets when "you get a money pitch, and you can hit it, and launch it." 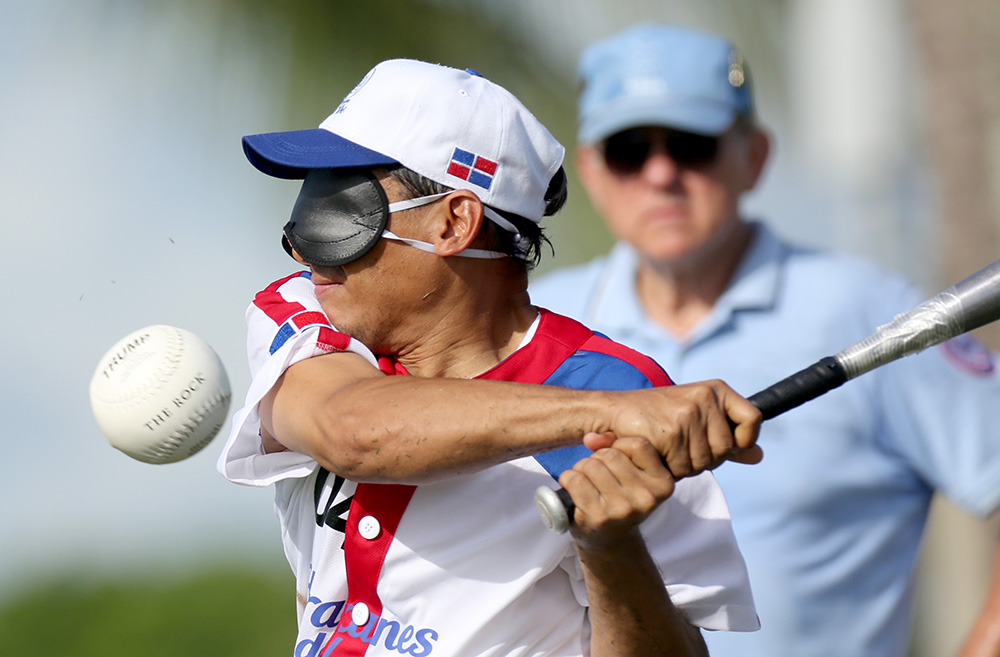 Franklin Peguero Garcia of the Caribbean Hurricanes swings and misses as he strikes out in a game against the Storm. In Beep Baseball, the batter gets four strikes. 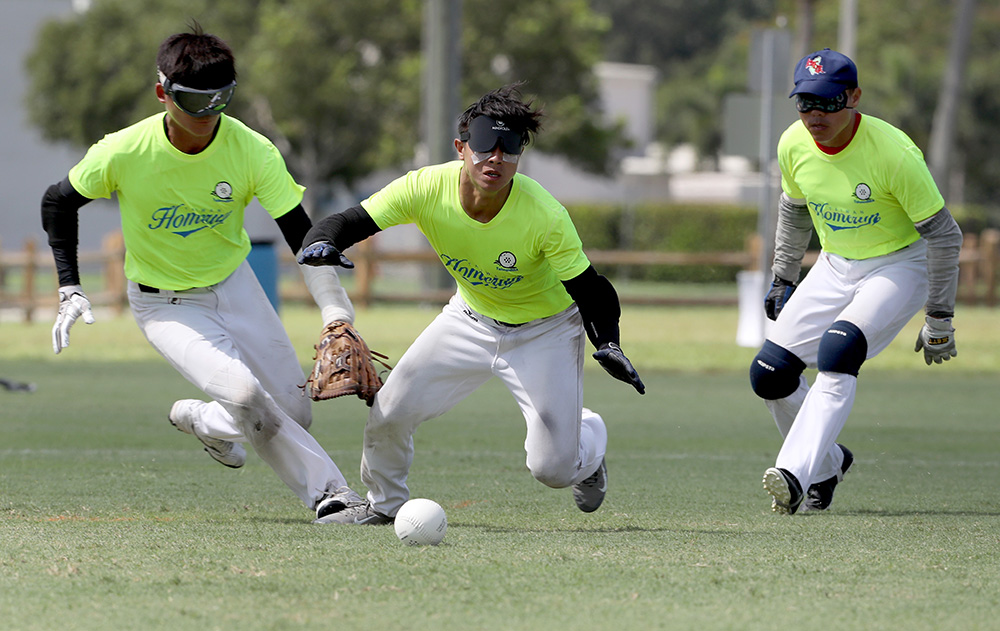 Vincent Chiu, Kaspor Chen and Jack Lai of the Taiwan Homerun go after the ball during the final game against the Thunder. Chen chased down the ball for the out. 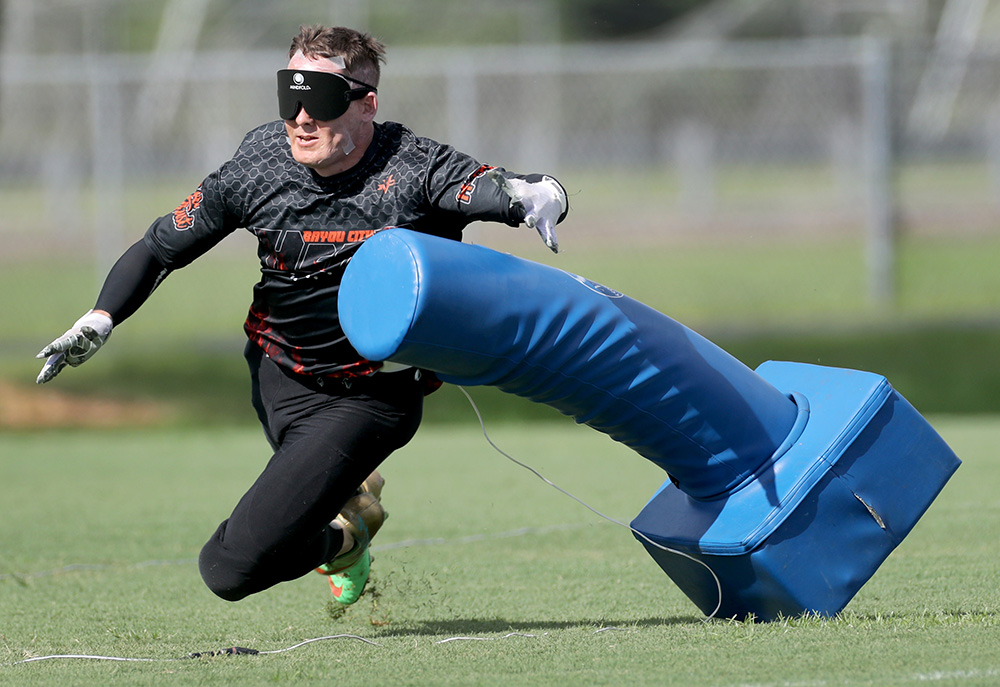 After smacking the ball down the third-base line, Tanner Gers of the Bayou City Heat dives for first base for a run in a game against the Homerun. 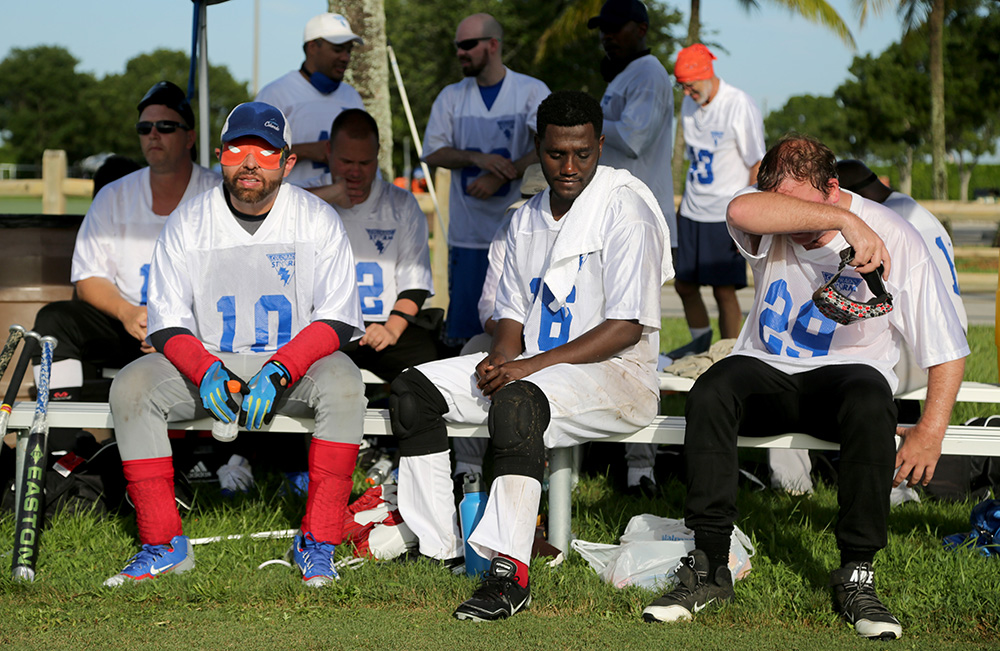 Caesar Lazcano, Ethan Johnston and Randy George of the Storm take a seat on the bench after warming up before their game against the Hurricanes. 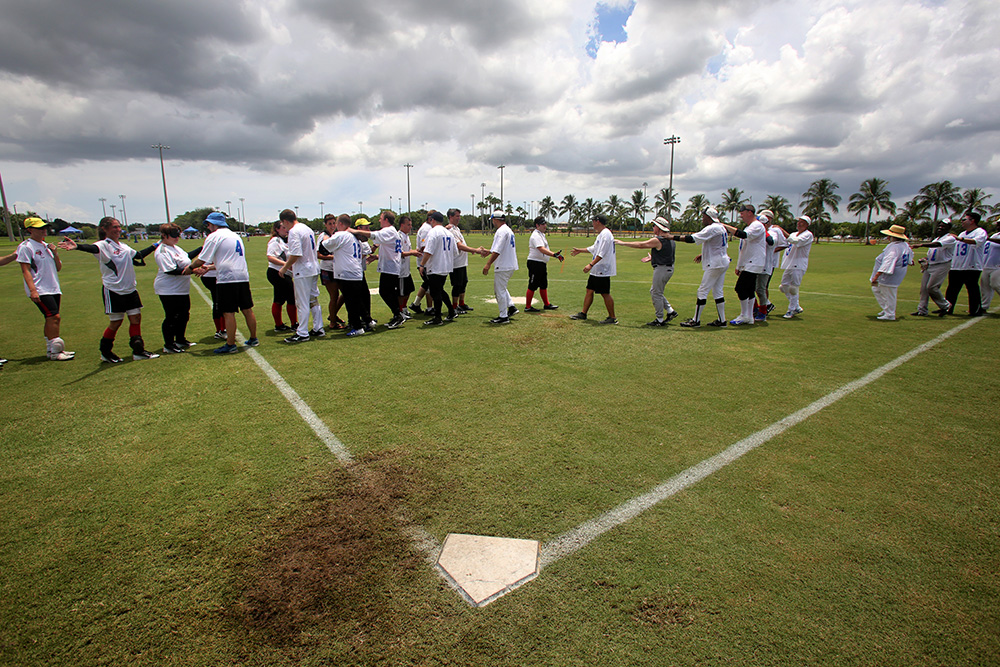 After their round-robin loss, the Pioneers congratulate the Storm.

At the crack of the bat, a defensive player drops to his knees and starts crawling toward the sound, using his body to block the ball and locate it. 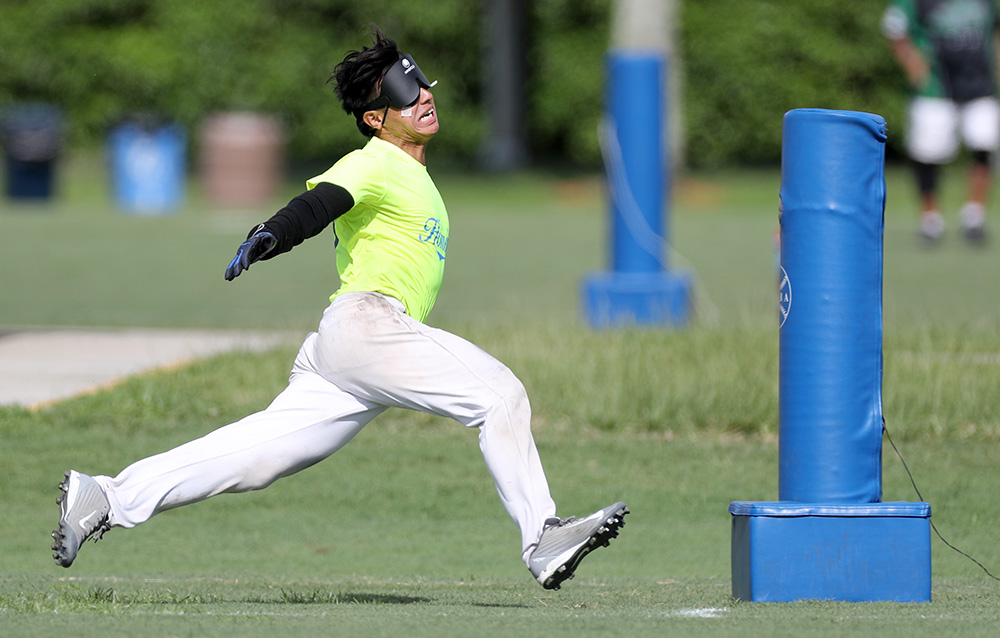 Kaspor Chen of Taiwan stretches his arms out as he runs to third base for a run against the Bayou City Heat. 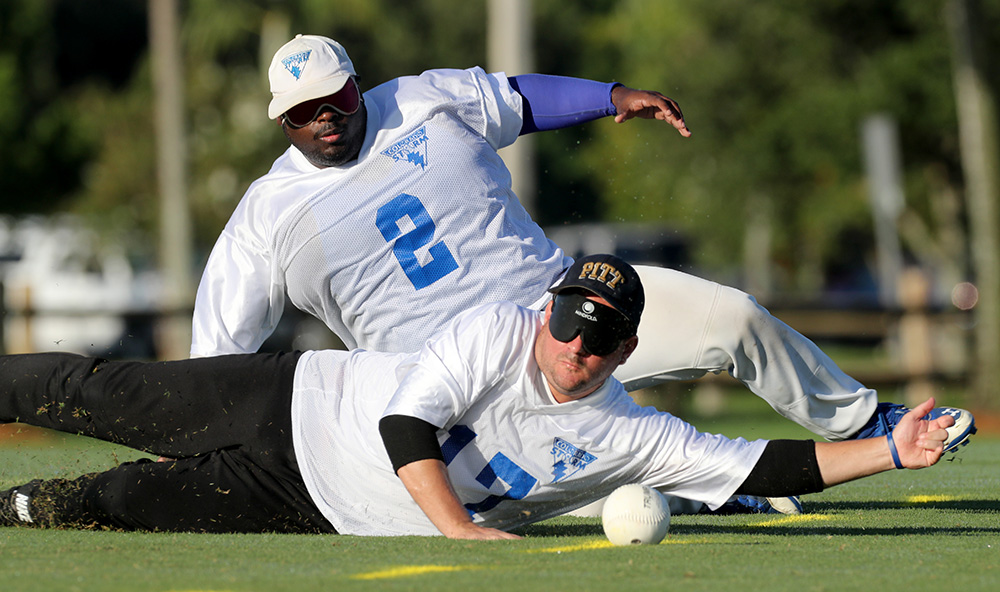 John Margist dives for the ball and is backed up by Storm teammate Demetris Morrow as they take fielding practice before a game. 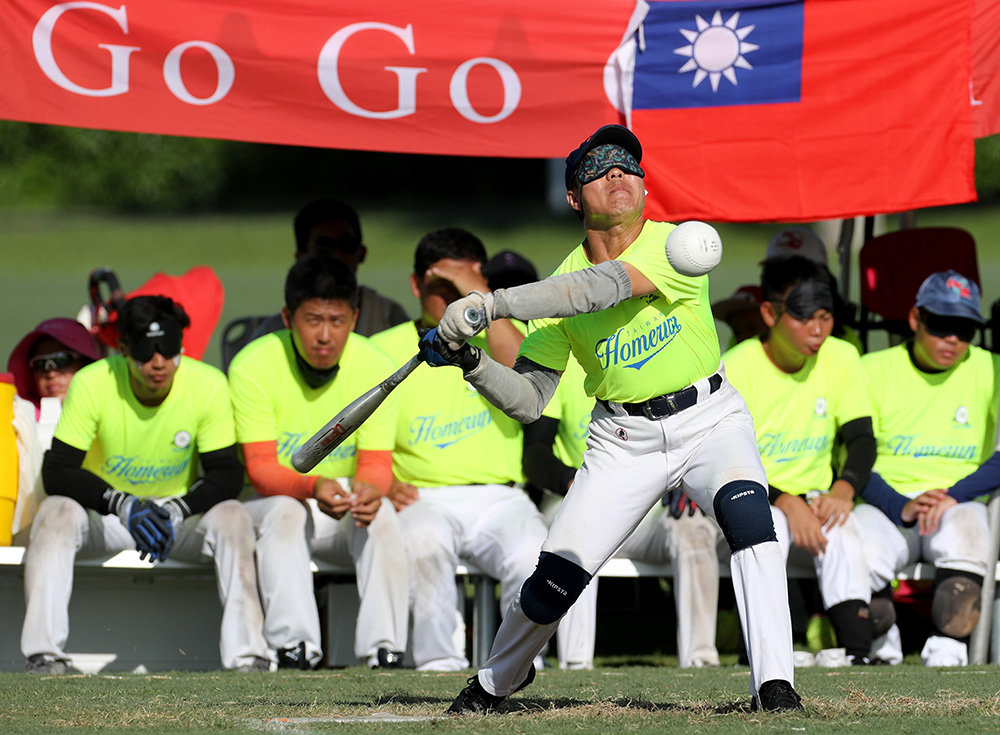 With his teammates on the bench behind him, listening to the game action, Jack Lai of the Homerun swings the bat against the Heat. He hit the ball and was called out as he ran to third base. 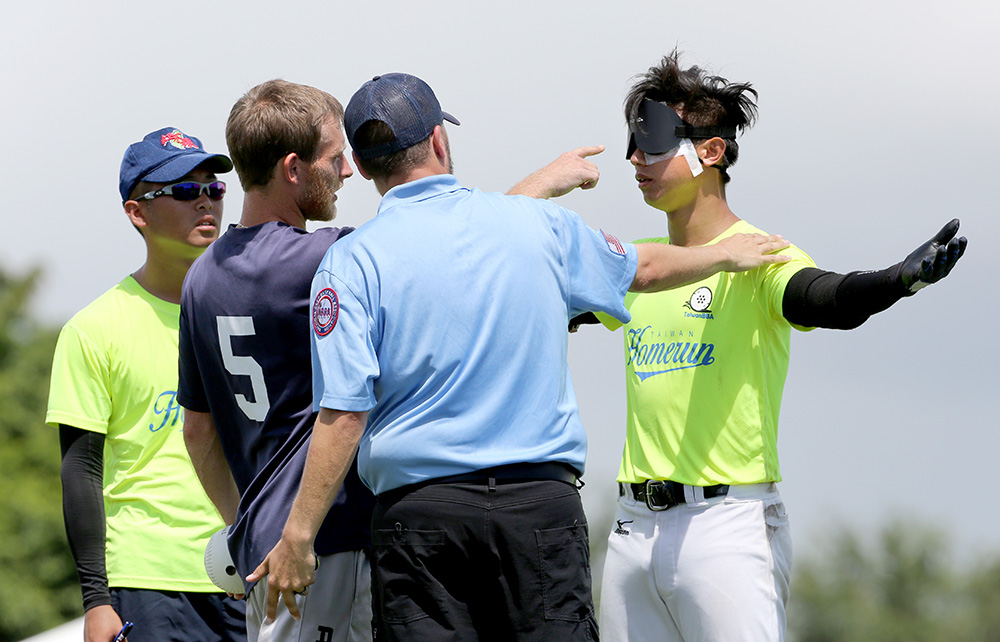 During the championship game, Thunder pitcher and defensive coordinator Jared Woodard (No. 5) called a timeout and walked onto the field with the umpire and an opposing coach to inspect the blindfold on Chen. Although Chen had patches taped over both his eyes and was blindfolded before the game, Thunder coaches suspected he might be peeking. After they took a look and adjusted his blindfold, the game continued.

Walker leads his team in a cheer. Walker found Beep Baseball when he 37, and says "it's the most rewarding thing I've ever done." 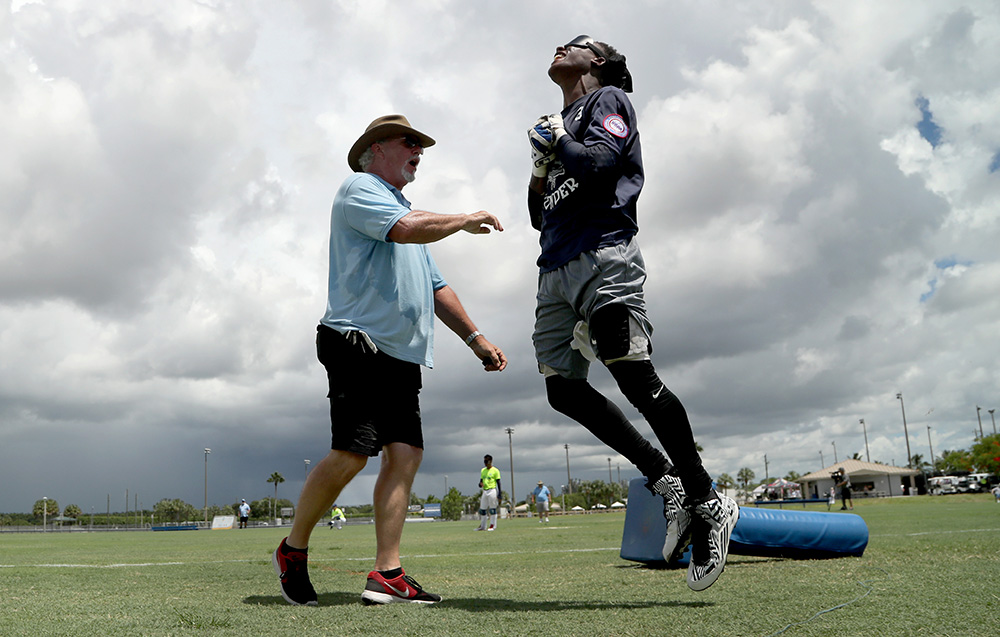 Cory White of the Thunder jumps for joy after scoring a run at first base in the championship game against Taiwan. The Thunder defeated the Homerun 15-10 to win the World Series. 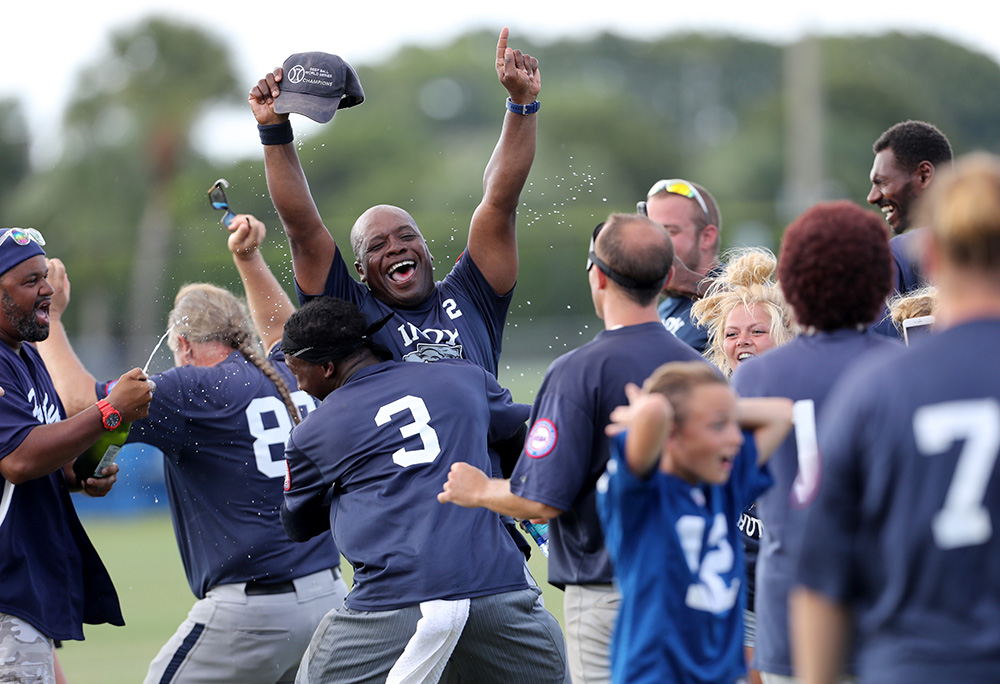 Thunder head coach/general manager Darnell Booker celebrates with his team after defeating the Homerun 15-10 to defend their title.