How much do we know about Vasiliy Lomachenko? He's a junior featherweight titlist from Ukraine who previously held a 126-pound title and owns two Olympic gold medals and two world championships. He's regarded as one of the best amateurs ever after accumulating a record of 396-1, and he's the No. 2 pound-for-pound fighter in ESPN's rankings.

Lomachenko, 29, turned pro in October 2013 and fought for a featherweight world title in his second professional fight, a loss to veteran Orlando Salido. Since then, Lomachenko has won eight fights in a row, including six by stoppage. He has power in both hands, speed and an entertaining attacking style.

We spent a couple of days with Lomachenko in Oxnard, California, where he now lives and trains under the tutelage of his father, Anatoly. There, we learned what "Lomachenko tennis" is and what he does to keep his mind sharp and his body ready ahead of the biggest fight of his career. 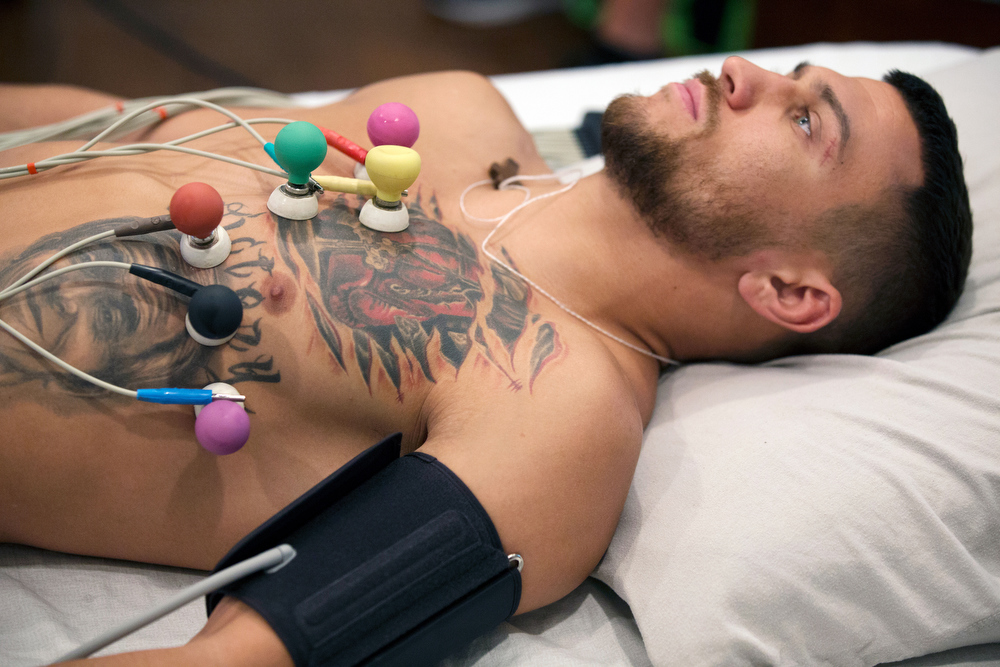 Vasiliy Lomachenko, a Ukrainian professional boxer, memorializes the people and ideas that have been most meaningful to him with tattoos. A portrait of his father appears on his abdomen (lower center). Lomachenko begins his day with breathing and mental exercises, all of which are recorded electronically. 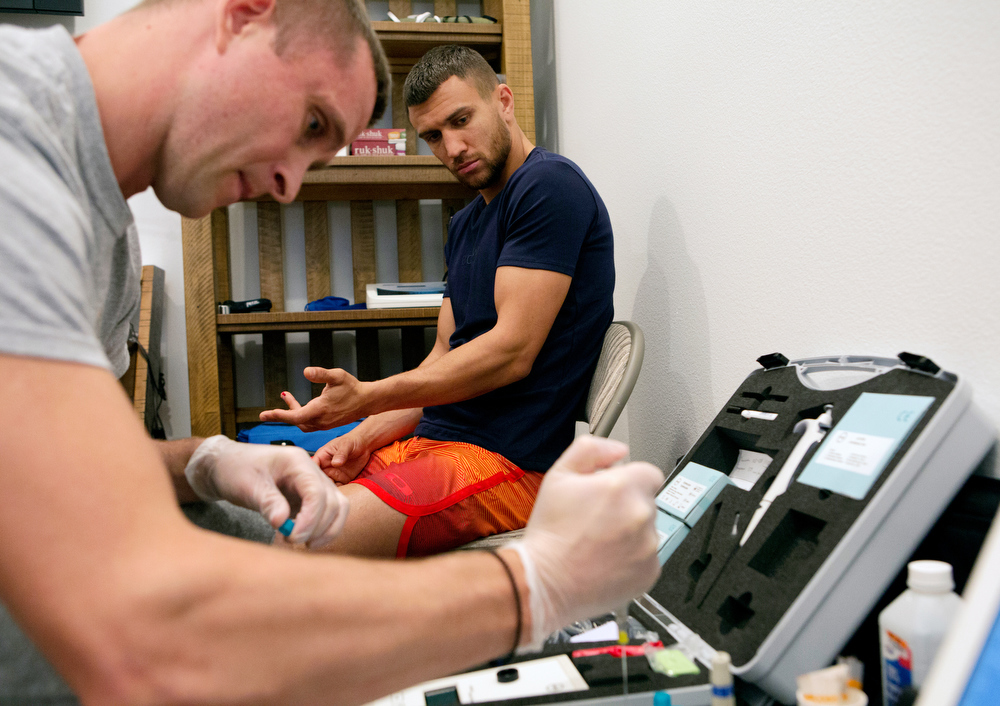 The morning starts with Lomachenko's sports psychologist, Andriy Kolosov, recording blood sugar levels and other baseline readings before a long day of training. 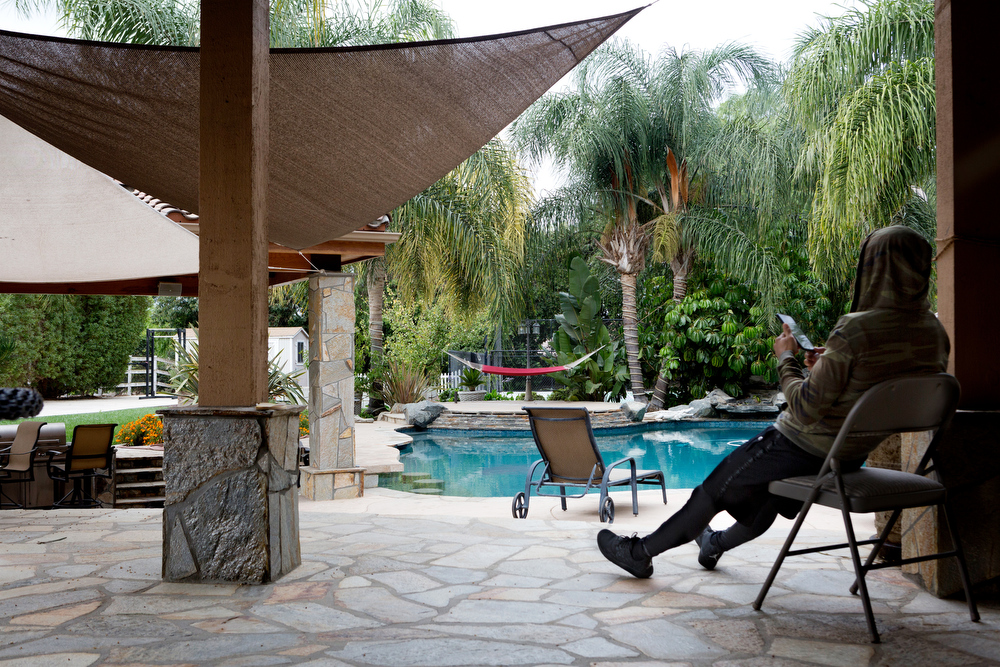 Sitting by the pool and checking his phone, Lomachenko enjoys the backyard of the Camarillo home he rents while training. It's a 30-minute drive from Camarillo to the Boxing Laboratory gym in Oxnard where he trains. 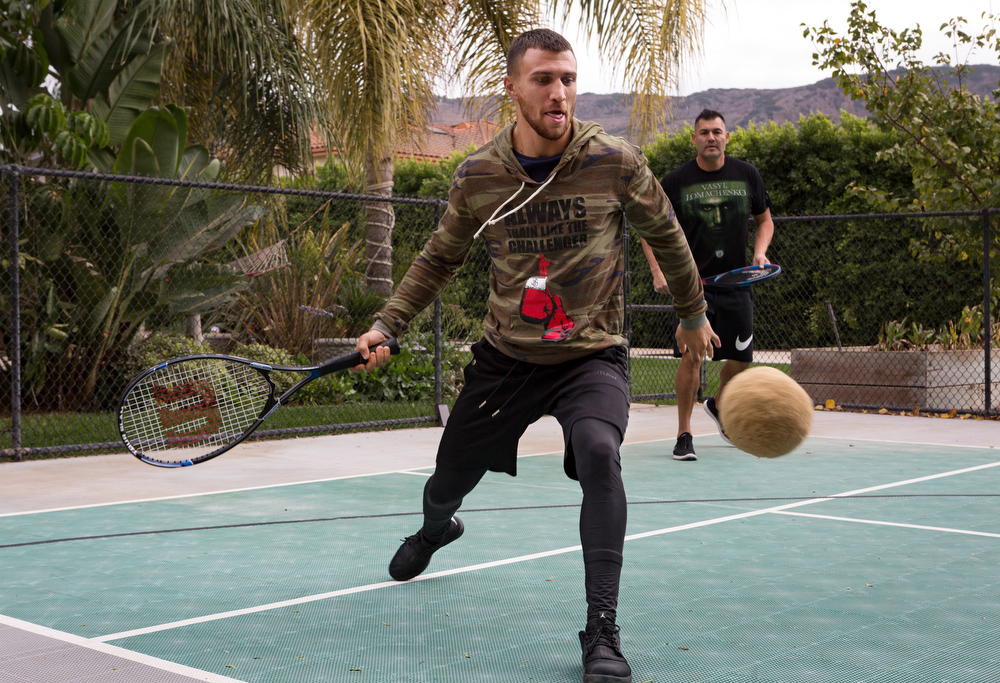 Lomachenko, front, plays "Lomachenko Tennis" with strength and conditioning coach Ciclio, back, as part of his training, and to keep the mood light. 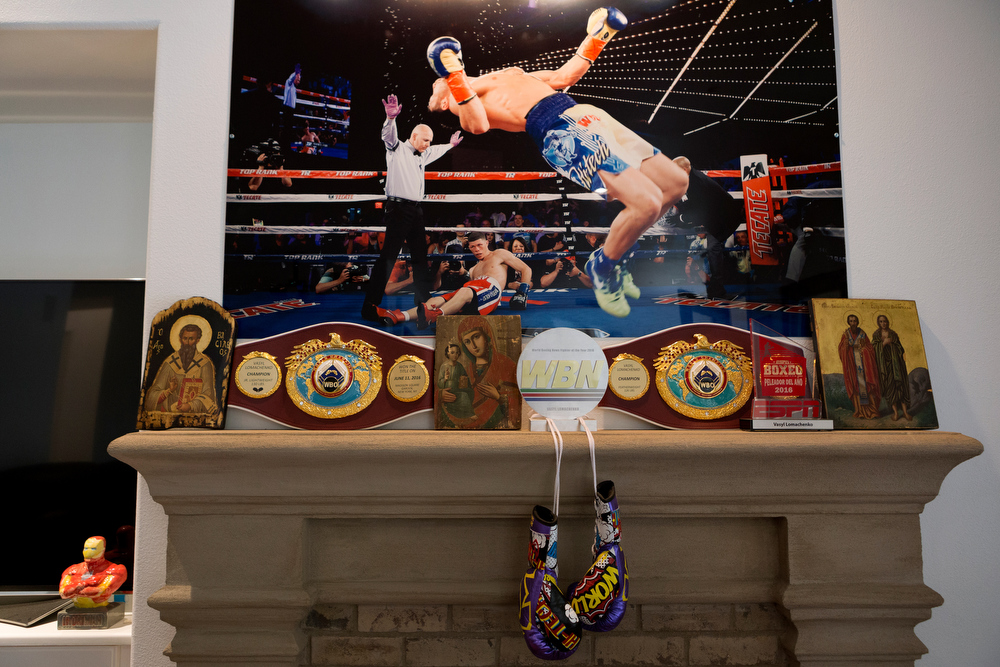 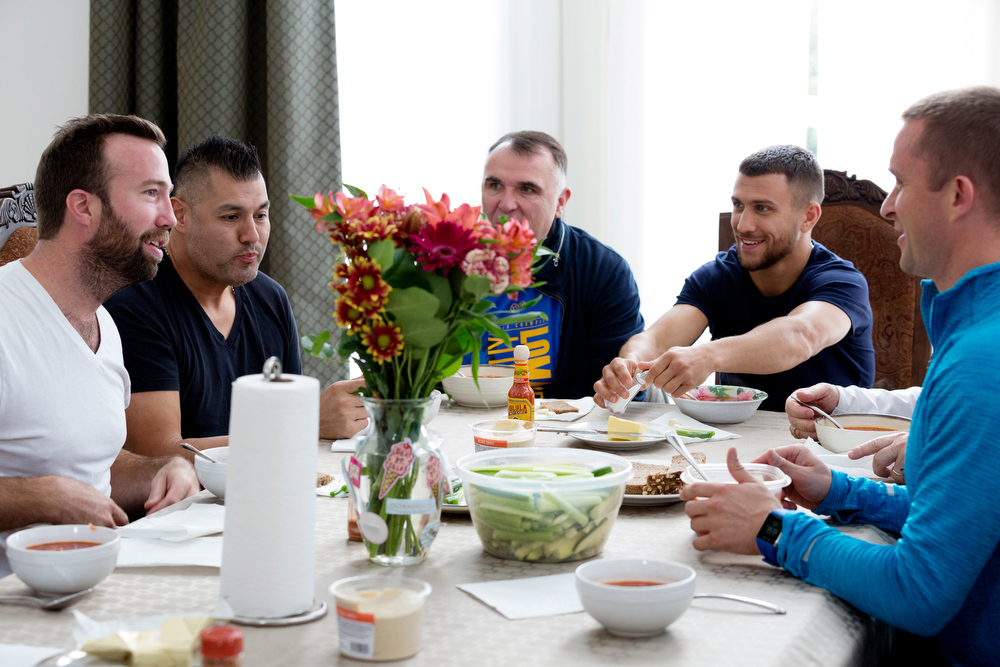 Lomachenko sits down for lunch with his manager, Egis Klimas, center, and support team in his home in Camarillo. 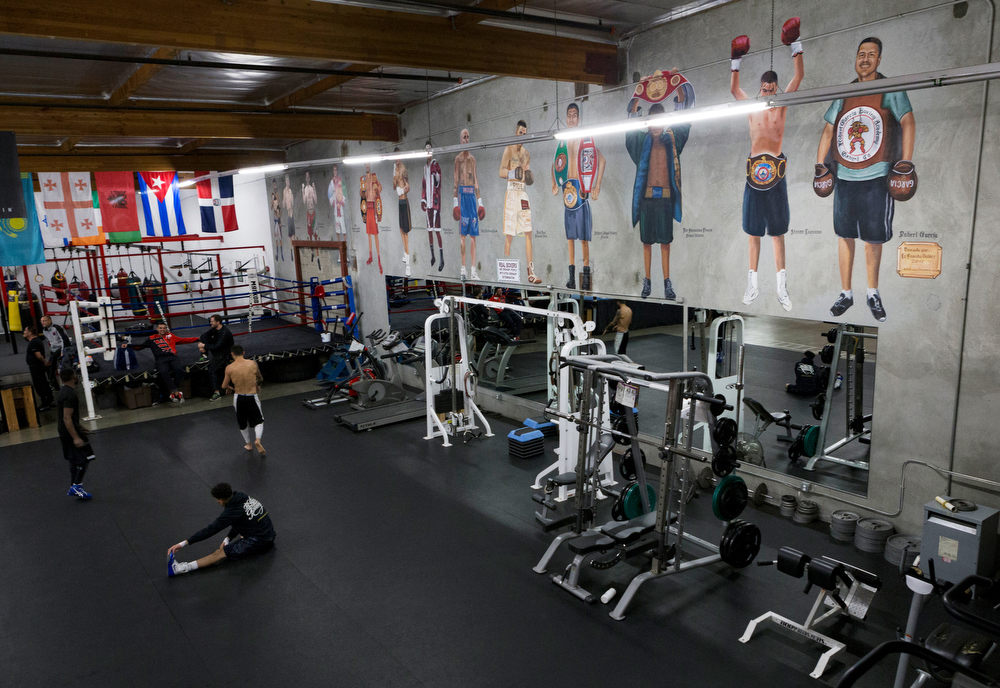 The Boxing Laboratory in Oxnard, California, has become "the" destination for Eastern European fighters in the U.S. Lomachenko says the gym reminds him of his home in Ukraine. 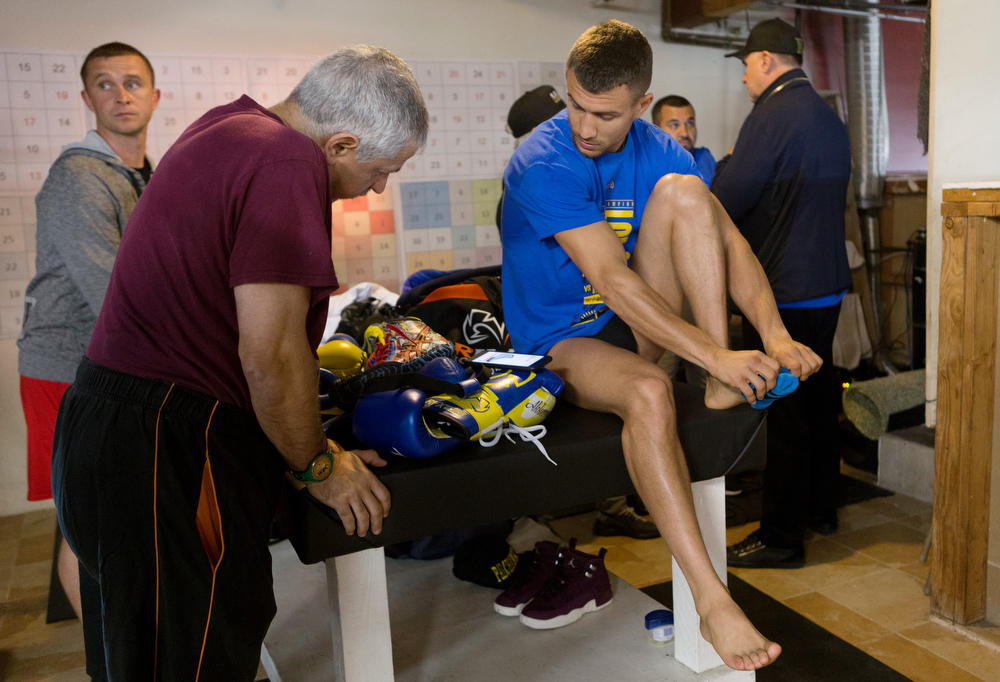 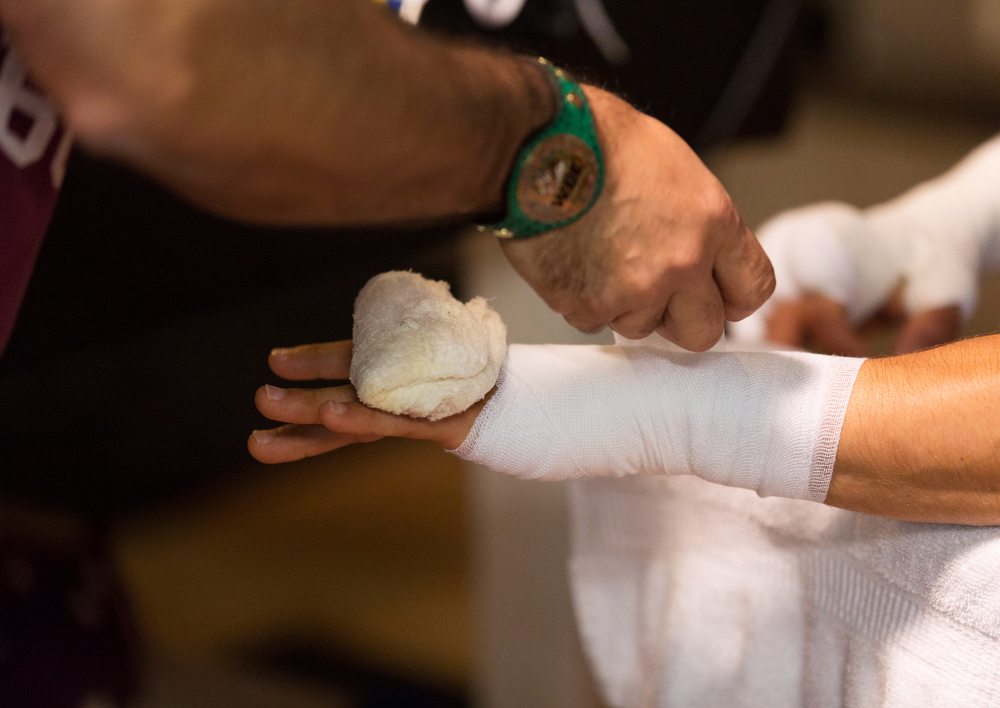 Before Lomachenko dons his gloves, veteran trainer and cutman Russ Anber wraps his hands. Hand-wrapping is an art, and Anber is considered an elite practitioner. 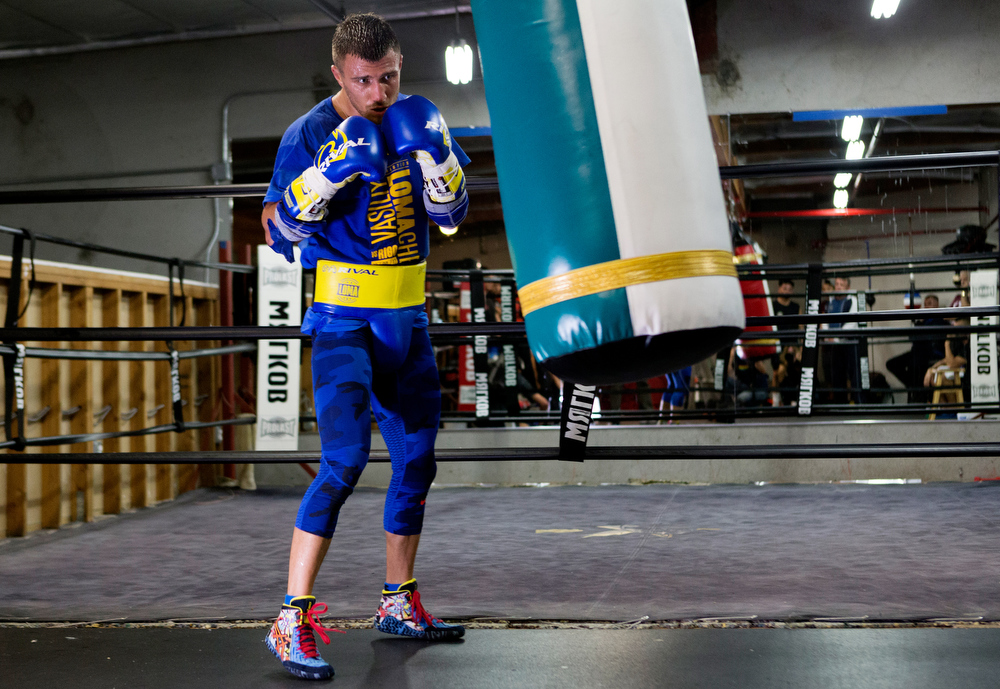 Lomachenko works the heavy bag, practicing an assortment of angles and the techniques he learned from his father. 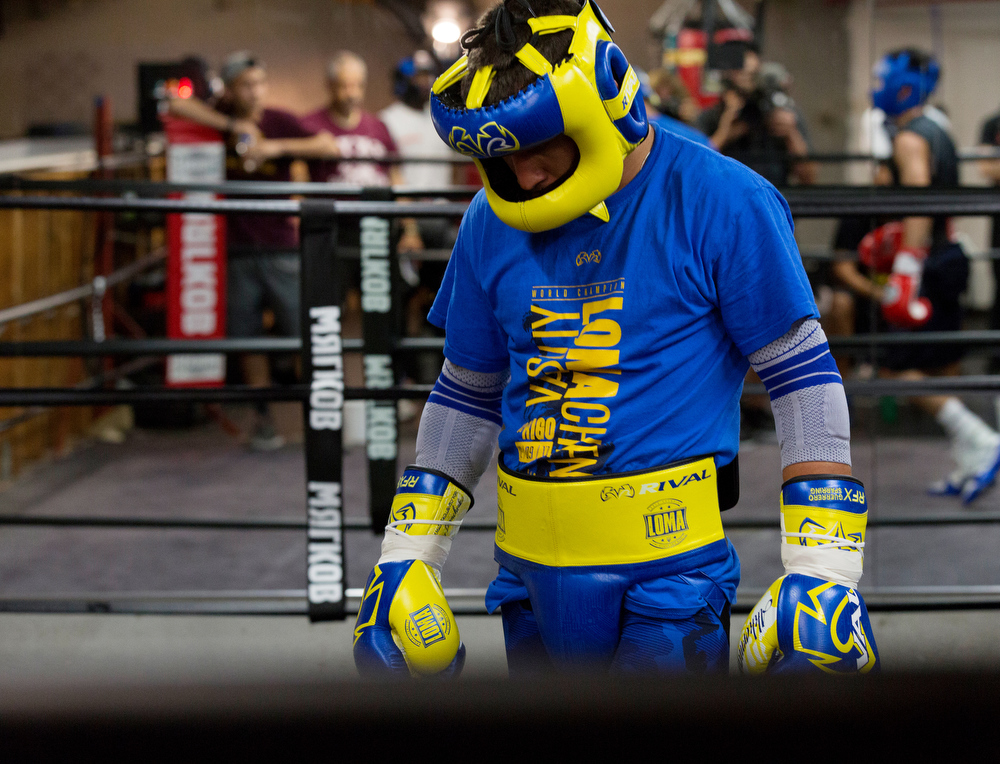 Ready to spar, Lomachenko looks down as he focuses on what he will do in the session. 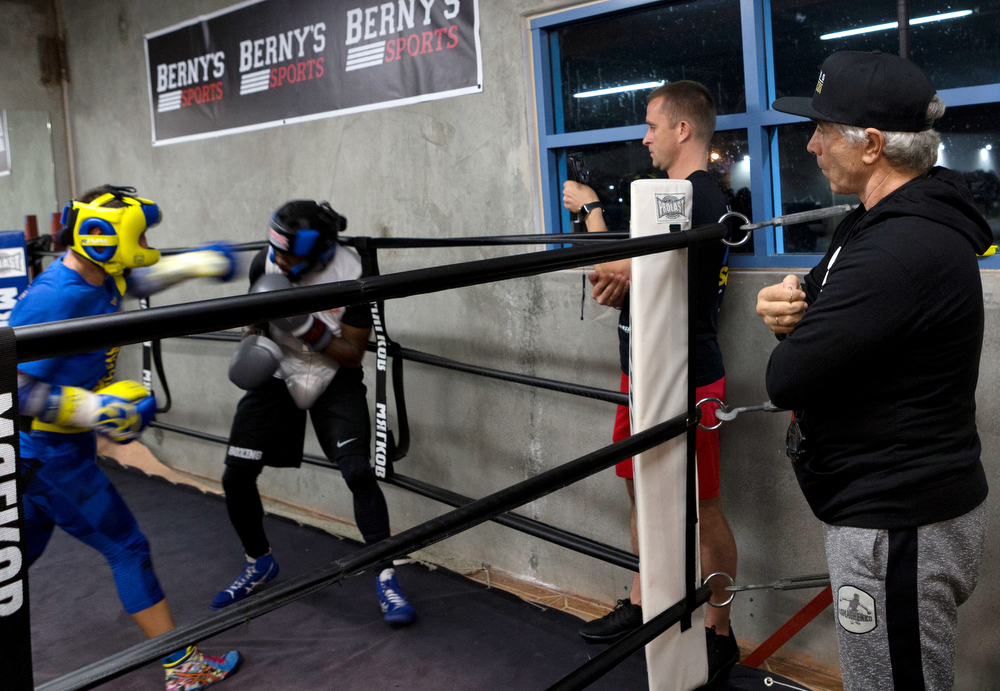 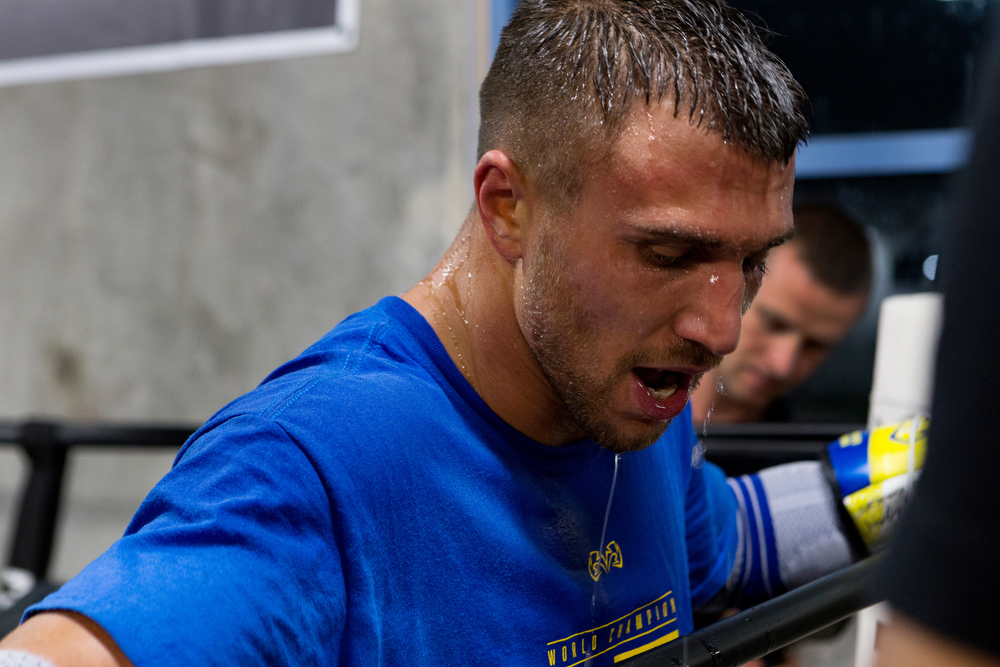 Lomachenko trains hard to be at his best physically. According to Lomachenko, when he wants to stop, he looks to his father -- it gives him the power to go on and work harder. 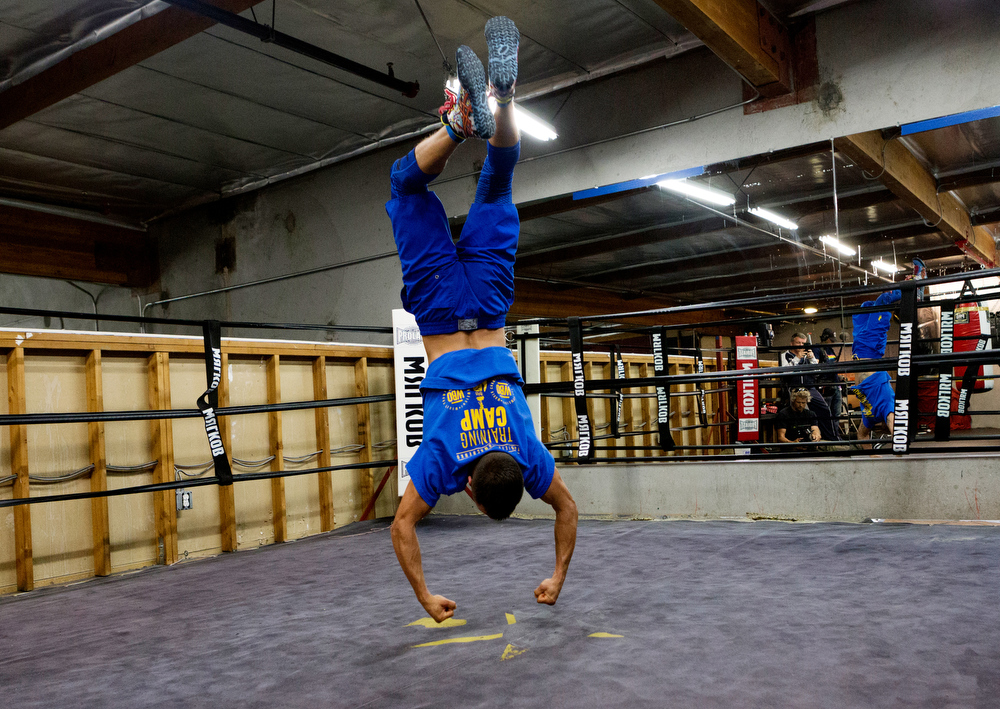 Lomachenko's regimen includes exercises that are not necessarily specific to boxing. He focuses on training for strength and balance, and has long been able to walk on his hands. Lomachenko says his father taught him to never quit and to always believe in himself. "I believed I was the best," says Lomachenko. 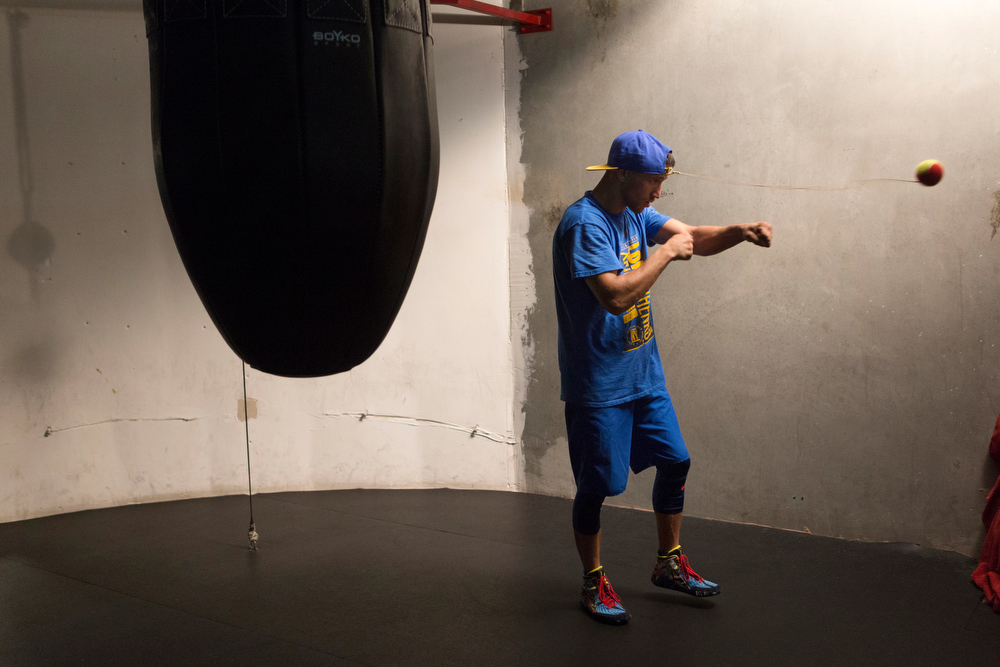 Lomachenko controls his emotions in the ring with the techniques he has mastered outside of it. 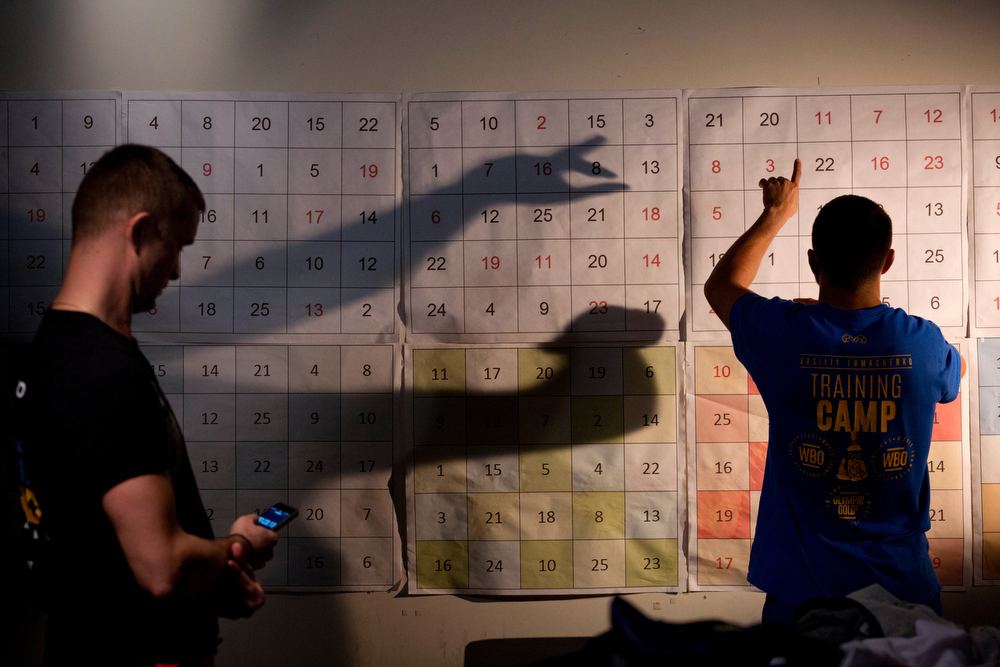 Working on mental exercises for "mind flexibility" and to "improve [his] thinking," Lomachenko re-orders a grid of random numbers as Kolosov, his sports psychologist, keeps track of time. Lomachenko is one of the most cerebral fighters in the sport, and his brain is kept sharp through these puzzles and what appears to be math quizzes.