Heather Hardy is a fighter. She doesn't need to tell you that. You can see it in the scars on her face as she sits down to wrap her hands before a training session. "There ain't no b---- I ever met that's tougher than me," Hardy says. "I'm tough as f---."

Hardy is 20-0 as a professional boxer but frustration over small paydays and lack of televised fights has pushed the 36-year-old single mother to pursue a career in mixed martial arts where female fighters can headline pay-per-views and pull in six-figure purses.

Hardy will face Ana Julaton on Friday in an MMA match at Bellator 194, in the first leg of a boxing-MMA doubleheader between the two. Hardy and Julaton will then square off in a boxing ring later in the year. "I have to make people remember me," she said. "I want everyone to know who I am this year." 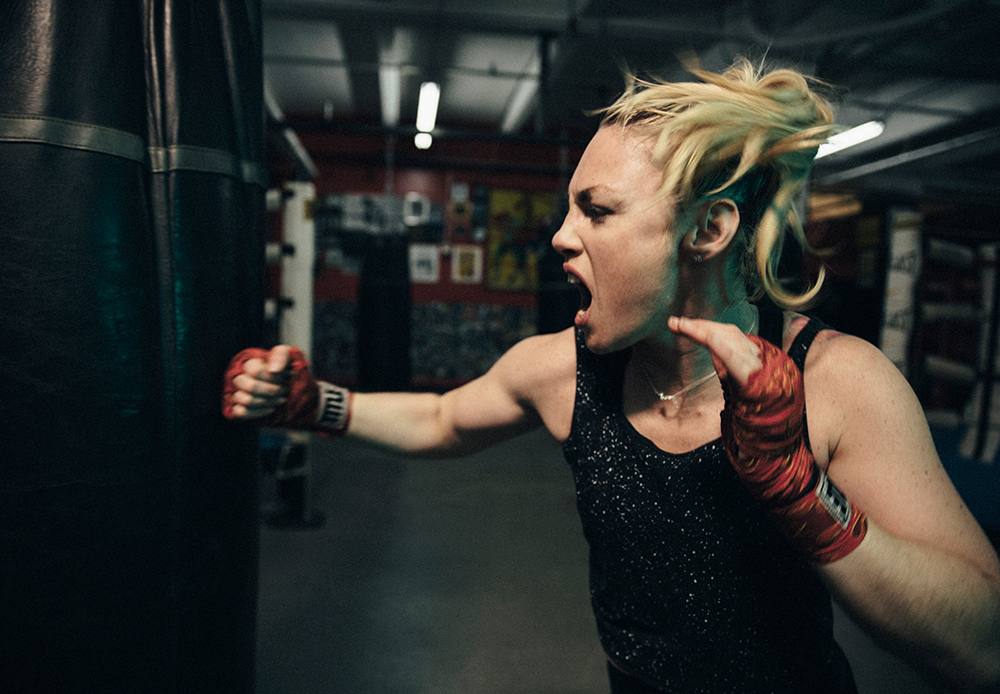 By Heather Hardy as told to Arash Markazi.

I knew I loved boxing the minute I got into the ring. I just knew in that very minute that this is what I want to do. I was finally good at something.

I think the fight comes from the way I was raised. My mom never let us give up. We're stubborn, we're Irish, we come from a long line of a really strong people.

I grew up in Gerritsen Beach in South Brooklyn. It's one road in and one road out. It's mostly Irish immigrants and working-class families. You're born there, you wait for your parents to die and then you move into their house.

I thought with all the people who are following me and reading my stories and writing about how I'm inspiring them, I thought it was important for them to know who I am and where I came from and how it's possible for them to do the same. I wasn't brought up in a place where my parents sent me to fancy boxing camps in the summertime. I didn't have the best childhood. Both of my parents worked two jobs and they raised my brother and sister. I'm still doing what I'm doing because I worked really hard.

I remember, right after [Hurricane] Sandy, I was living at Gleason's. I had to send my daughter to stay with one of my cousins on Long Island because I couldn't have her living in the gym. So I was living in the gym just so I could get clients to pay the bills and I had no place to live. I owed a ton of money in bills. I remember being in the dark at Gleason's Gym just crying in my office. What the f--- am I doing? When is this going to turn around?

When I first started boxing they told me I could never make a career out of this. I had to do it for fun. I thought from a women's right standpoint back in 2012, why are we still having this conversation? I tried to make it more known that I was there. The more people who knew me, the more people would ask about me and I got a lot of publicity in boxing, but nowhere near the scale of what they're getting in MMA. 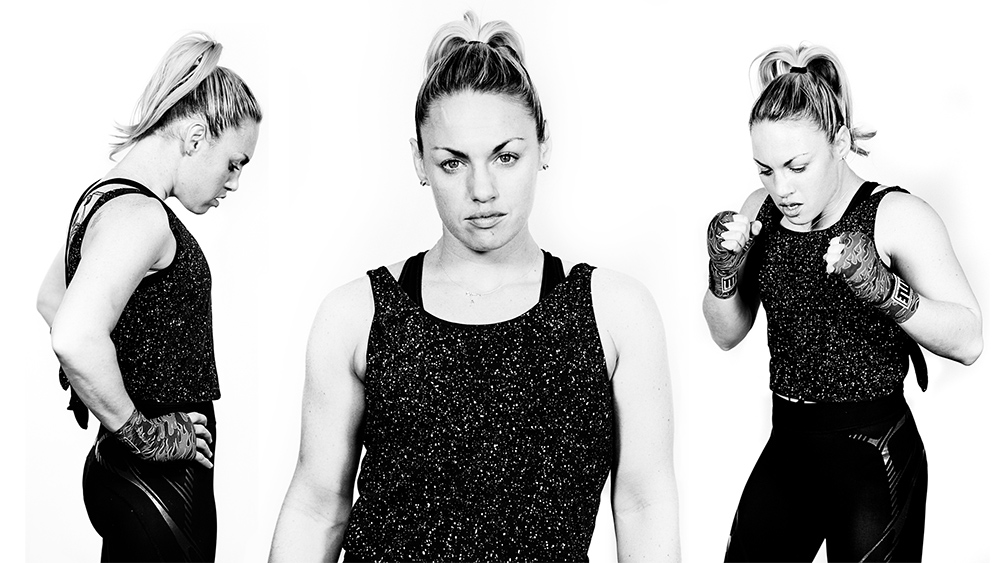 I signed with Lou DiBella because he liked me -- I was a fighter and I sold tickets. When you can rent out B.B. King's (in New York) for $7,500 for a show and one fighter is going to sell $12,000 in tickets that makes f---ing sense. I was thankful that he gave me a chance, but after my fifth win, 10th win, 15th, you stop being thankful and want something in return. You want to be on TV. You want to get paid. You want to get treated like an equal, and that's when I decided I need to go to MMA and make my mark there.

I went into MMA mostly for money. They aren't girls in boxing. I was 20-0 and I had two WBC titles and I was barely making $7,000 for 10-round title fights and they would put me on the undercard . Meanwhile, I'm selling $40,000 in tickets for these shows and I would be up first. I didn't know why they were doing this and I didn't know how much longer I could do it. I'm 35 years old and I really don't have the longevity to wait for boxing to come around, so I thought if I go to MMA, have a couple of fights, get some publicity and get some press, maybe I could translate it back to boxing. That's what I really love.

Women in mixed martial arts are respected so much more than girls in boxing. They're given more opportunities, they're getting paid, they're getting sponsorships, and they're being shown on television. I didn't expect to be the next Ronda Rousey or anything but I just knew that the potential was there if I wanted to be. 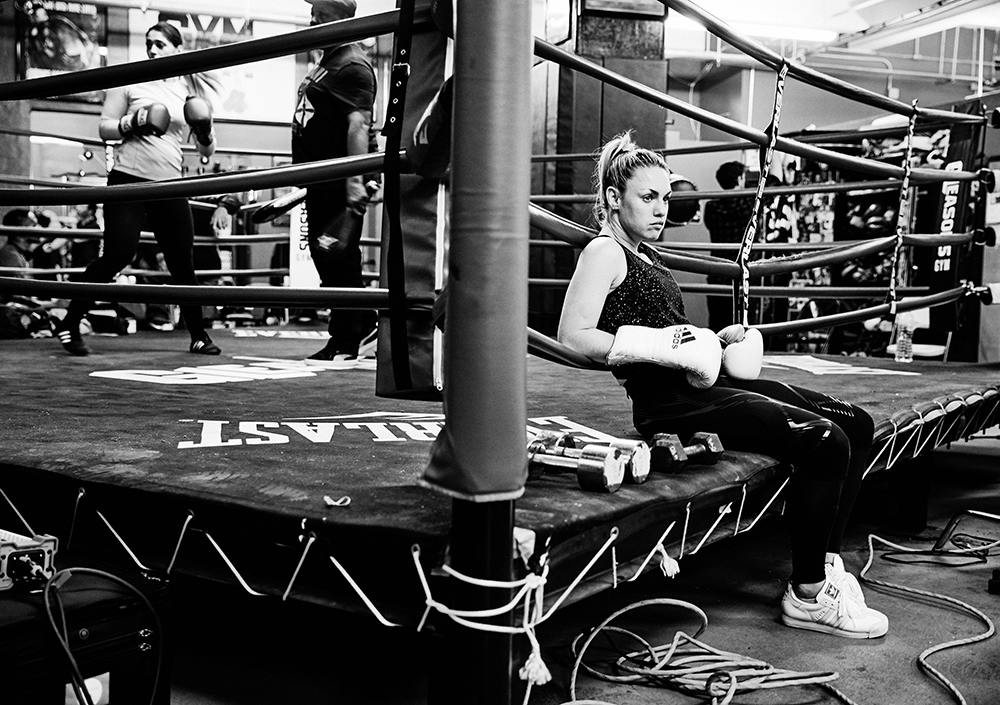 It was surreal being on my knees in Madison Square Garden and hearing 20,000 people screaming my name. That's the kind of stuff you dream about. I mean the only thing that would have been better than that for me was running out of the bullpen at Yankee Stadium. I never even imagined that was a possibility of a reality for me. ... I have a Yankees tattoo on my back. I thought I was going to be the first girl to play for the New York Yankees, so I got a Yankees tattoo when I was 15. My mom got it for me. I am the biggest Yankees fan.

You want to be representative of who you are but you also want people to remember you. So many women go the route of being trashy or super vocal, and I wanted people to remember me in a good way, so in my last weigh-in I wore glasses, red lipstick and a black bathing suit. If you want to be in the spotlight you have to make people to remember who you are. I had to find a way to do that without being the loud mouth or the trashy girl or the girl who is f---ing half naked on the scale. I have to find a way to do that. I have to make people remember me. 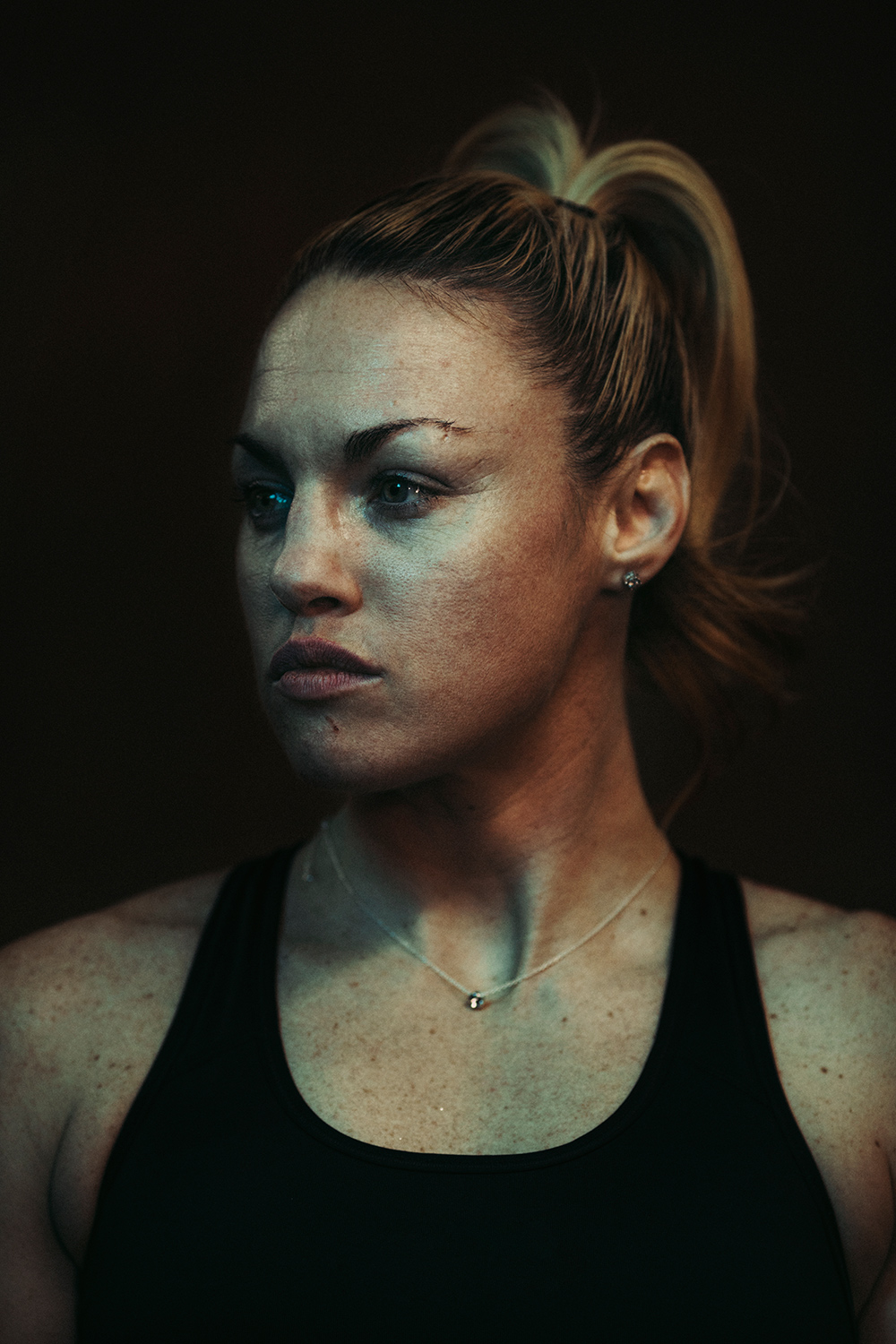 I learned after my last fight that I can't go into an MMA fight thinking it's a boxing match. Boxing is about being super technical and tactical and smart and finesse and dancing. But you can't go into an MMA fight thinking there are rules. It's a war. My next round of training for MMA has been about changing the way I think. The last fight did that to me. In the last fight I was trying to score instead of trying to kill this girl. I was trying to score like I do in boxing, but in MMA you have to try to hurt people.

After my last fight, I Facetimed with her before I got home because I wanted her to see my face. I didn't want her to be surprised, and she looked at me and said, "Just as ugly as I remember." So, she was OK.

I don't want to look like that after a fight. I never go into a fight thinking I'm going to break my nose so good tonight. I don't want to do that, but it just happens. I think everyone has a red-flag moment, when they're in trouble. What do you do when you're in trouble? Some people will move and try to get space. Some people will hold and grab. I fight. When I find myself in trouble, I just fight, and in my head, I'm thinking, "This person is stronger than me so I have to make them tired so they're not tired." So, I just fight until that b---- gets tired. 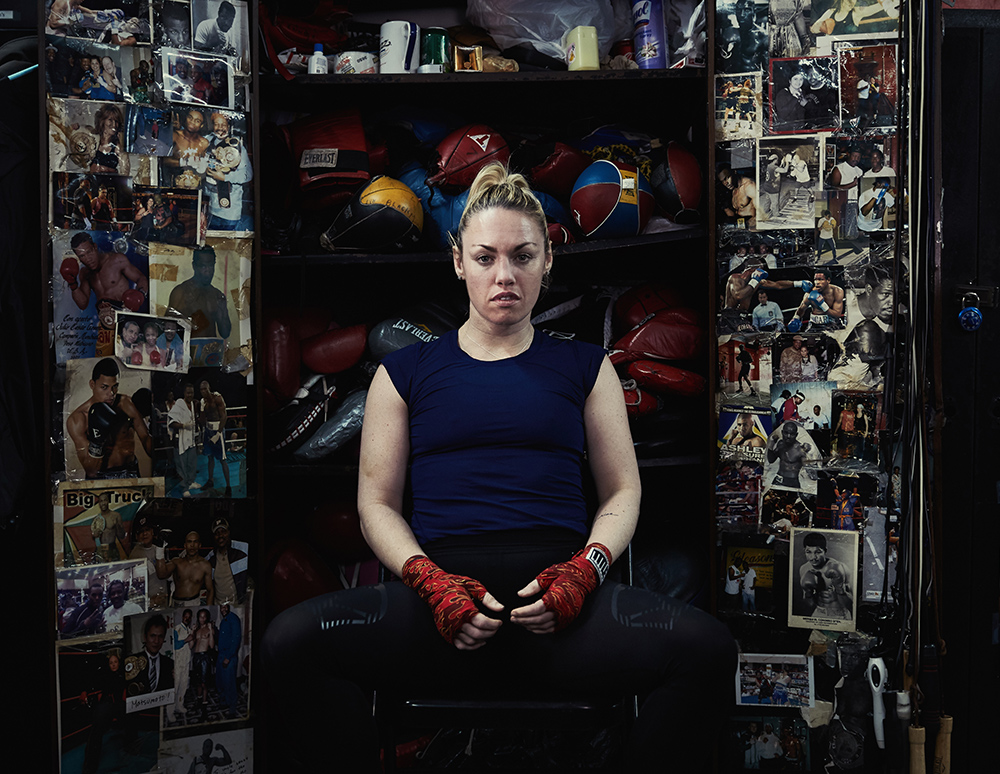 The one thing about being assaulted like I was, whether it be physically, sexually or whatever, you feel so isolated. You ask why did this happen to me and you say this happened to me because I'm bad. And you have to carry that around. I still carry that around and I have to remind myself that it didn't happen to me because I'm bad but because he was bad and it's not my burden to carry, it's his. I think people have to hear that. You're not alone. There are super successful people who had s----y lives too, but there's two things you can do: You can either use it as an excuse or you can use it as a reason to propel you forward. And that's what I did. I'm a fighter.

I got this tattoo, "Still I Rise," with my two best friends. We have a group of friends and it's the judgment-free zone and we're a bunch of Alpha females who make really stupid decisions, but we've all crossed some s----y bridge in the past. We force each other to have a coffee date or a wine date just to catch up for sanity, and we all got this tattoo, "Still I Rise," as a reminder that some days you can't finish but still I f---ing rise.

Every time I get in the ring or the cage, I'm thinking, "What are you doing?!" I don't know why I do it, but in the middle of the fight, I love it. When the bell rings and after the first punch is my favorite thing in the whole wide world. 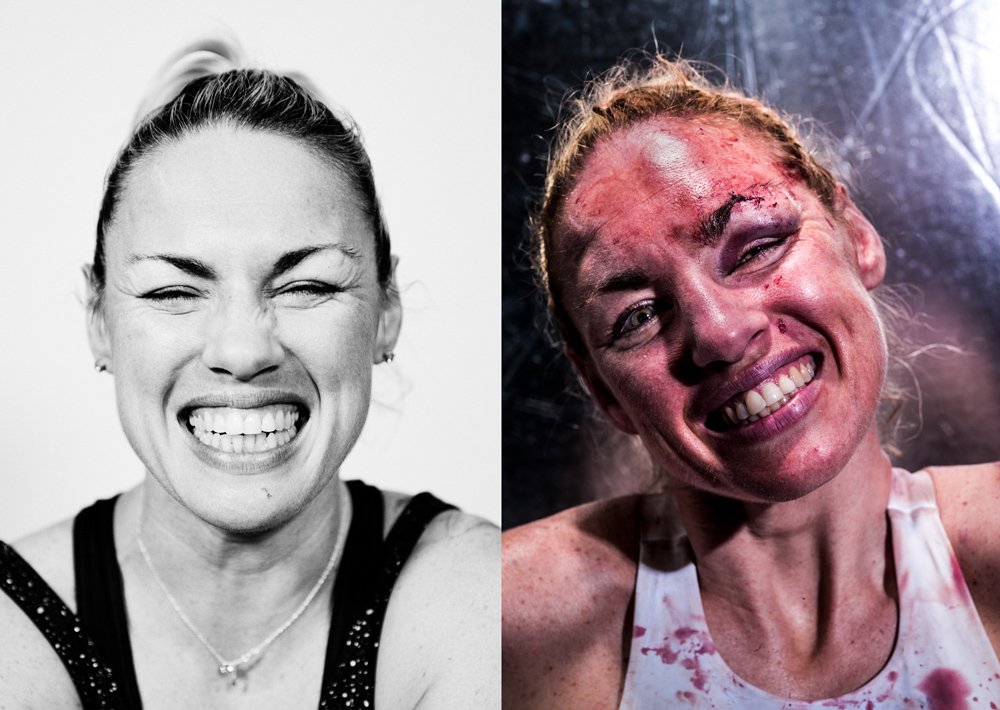