Follow the swarm of fans to Nikolskaya street on Red Square, the same Red Square where nuclear missile parades took place in the 1980s, where the mummified body of Lenin, the founding father of the Soviet state lies, and home of the Russian Kremlin. The Christmas decorated street, now synonymous with fashion designer stores and Moscow's best restaurants, hosts fans from all 32 participating countries as they celebrate the spirit of the World Cup day and night.

Muscovites also come to Nikolskaya street to see the fans. They snap pictures of Argentinian fans as they chant their cheers to the beat of drums, or with ever-present Mexican fans wearing a luchador mask. The Peruvian fans, estimated to be over 43,000, known as the Blanquiroja (or white-and-red) for the color of the national team uniform, traveled to support their national team after a 36-year drought. Some sold everything to come here. In Yekaterinburg, Ricardo Manuel Banda said he sold his apartment, car and quit his job as soon as Peru classified to the World Cup and purchased a plane ticket. In order to save money, he traveled by bus for a month just to get to Russia. "I'm part of a generation who grew up hearing about Peru at the 1970 and '78 World Cups. I never thought I would live to see my team play in the World Cup, I had to be here so I can tell my sons when I was here supporting my team."

Being a soccer fan requires devotion and passion for your national team and overall sacrifice. Selling your house, car, or quitting your job just to make it to Russia can be just the start of a long journey. Attending the World Cup in Russia meant traveling long distances to all 11 host cities. It required taking overnight trains, 2 a.m. flights, or sometimes taking a 48-hour bus ride from Yekaterinburg to Sochi as fans of Peru did to see their beloved national team. A family of nine from Colombia was traveling through all four of the cities where the Colombian national team was playing. All nine slept everywhere throughout an apartment in Saranks, even on the kitchen floor, just to see their team debut against Japan. But where one begins to understand why fans make these types of sacrifices is at the stadium. Mass hysteria can be best described as the moment every soccer fan dreams of. The World Cup is truly about the fans. It wouldn't have the same meaning without them and the sacrifices they make, all for an experience of a lifetime. 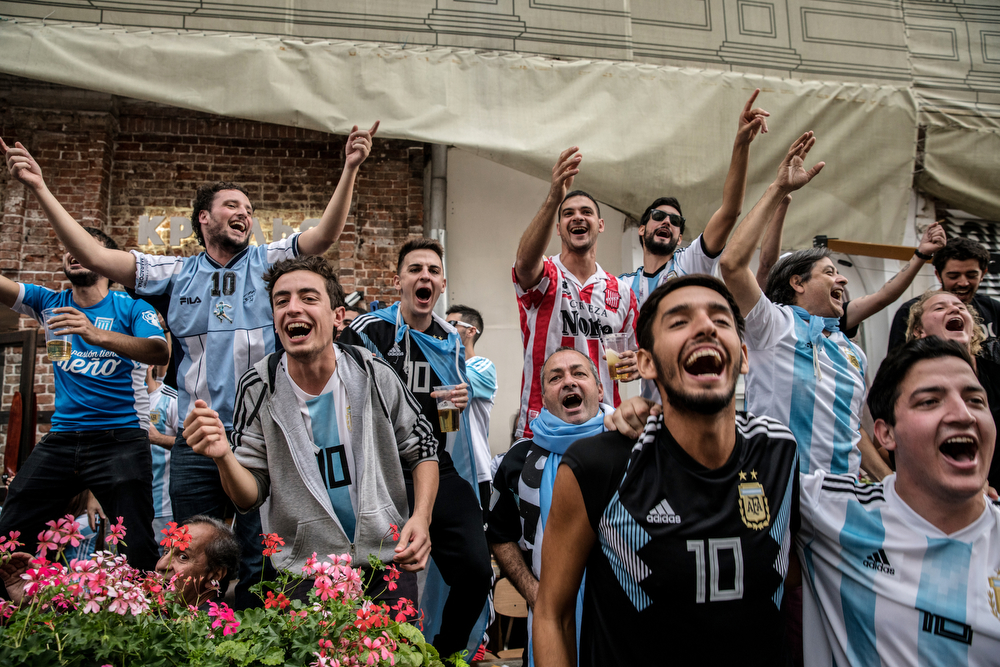 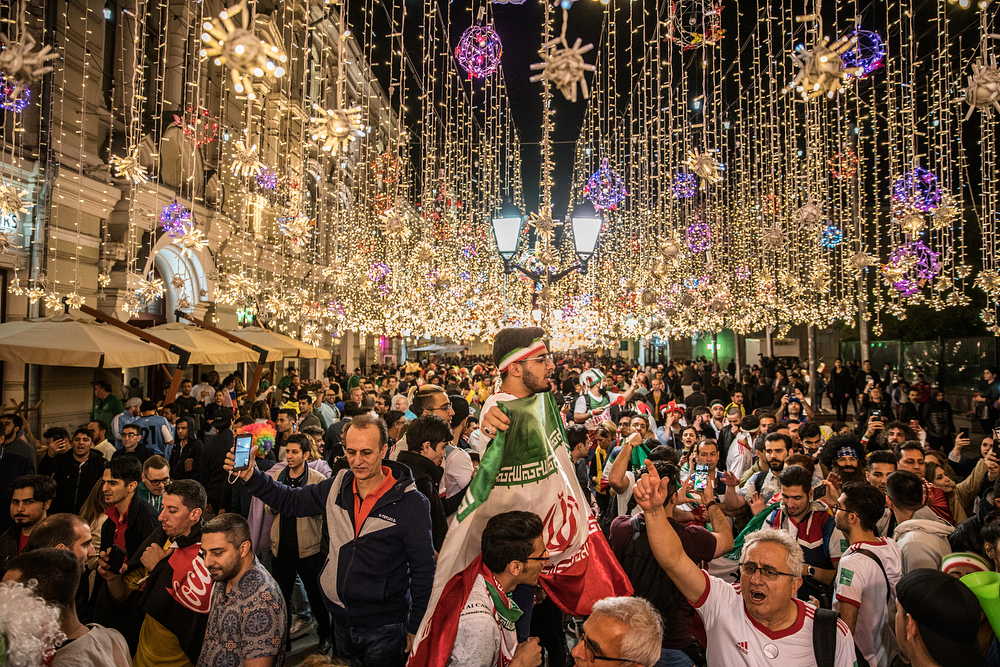 Iranian fans also convene on Nikolskaya Street to chant and celebrate their national team at the World Cup. 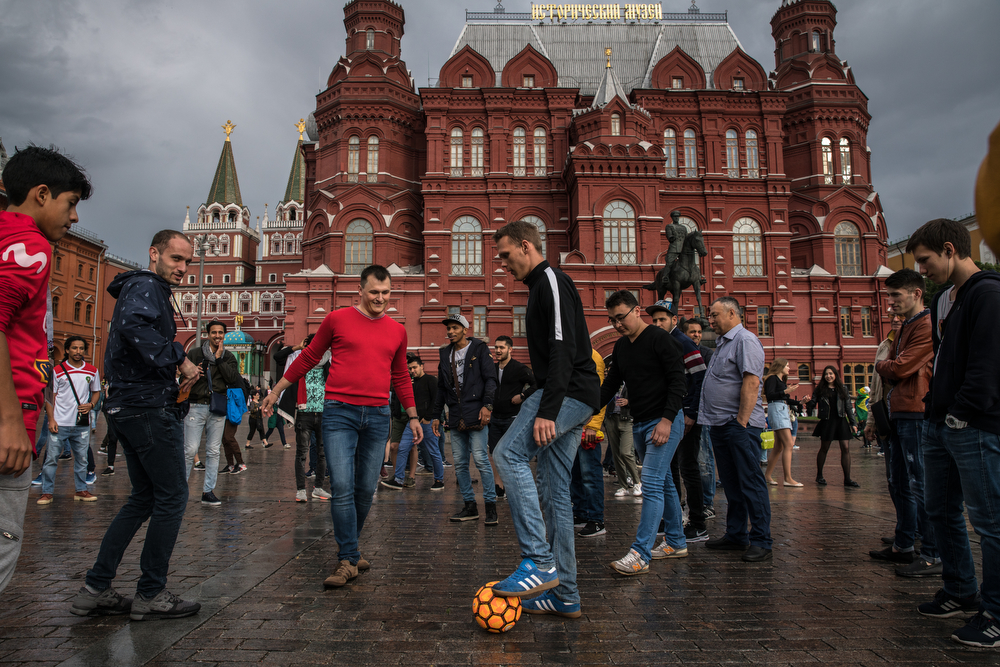 Visitors and residents play with a soccer ball outside Red Square in Moscow days before the start of the World Cup. 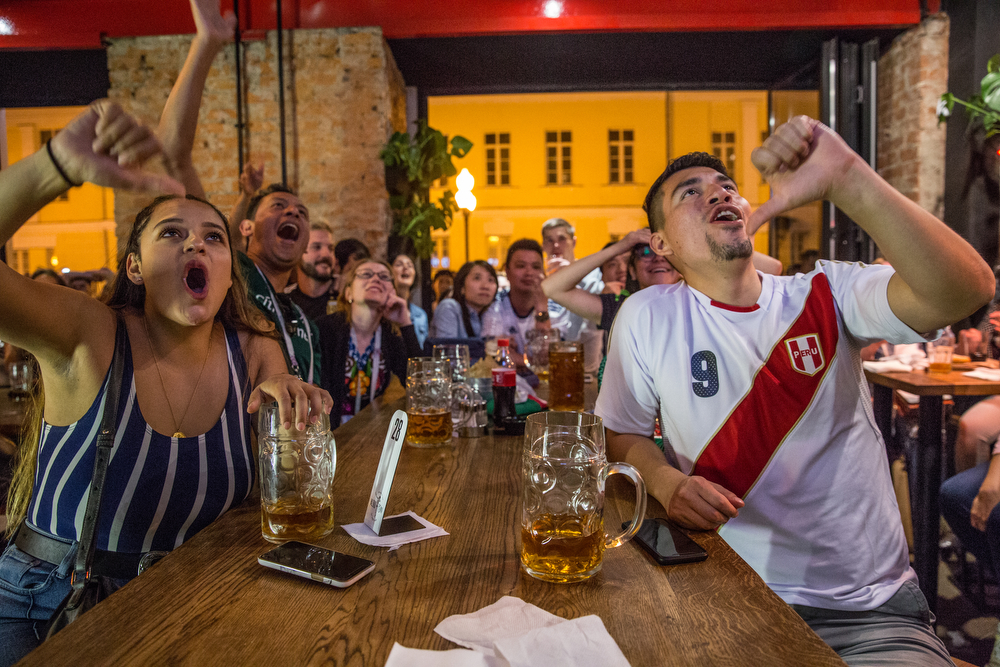 Peruvian fans at a bar in downtown Moscow boo while watching the game between Portugal and Spain. 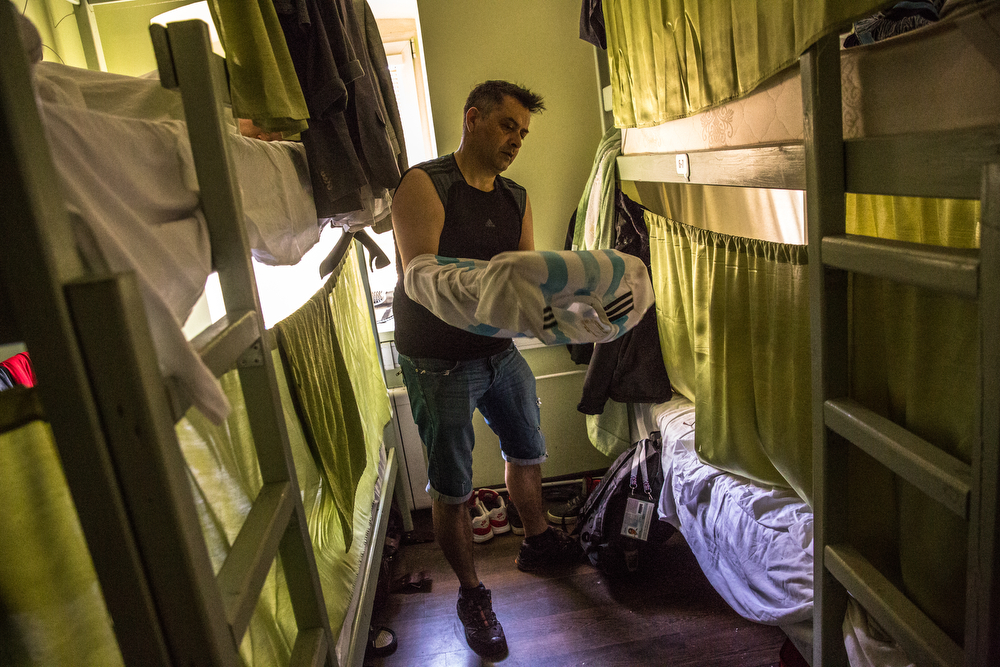 Ariel Salgado puts on his jersey at a budget hostel before heading to the Fan Fest to watch the game between Argentina and Iceland. After working for 10 years at Patagonia in human resources, Salgado saved enough money to buy a house in his hometown of Cordoba and then decided to quit and relocate. He had enough frequent-flier miles saved to purchase his flight to attend the World Cup. He has followed Argentina's national team to all the qualifying matches and didn't hesitate to make the two-day journey to Russia to support his team. 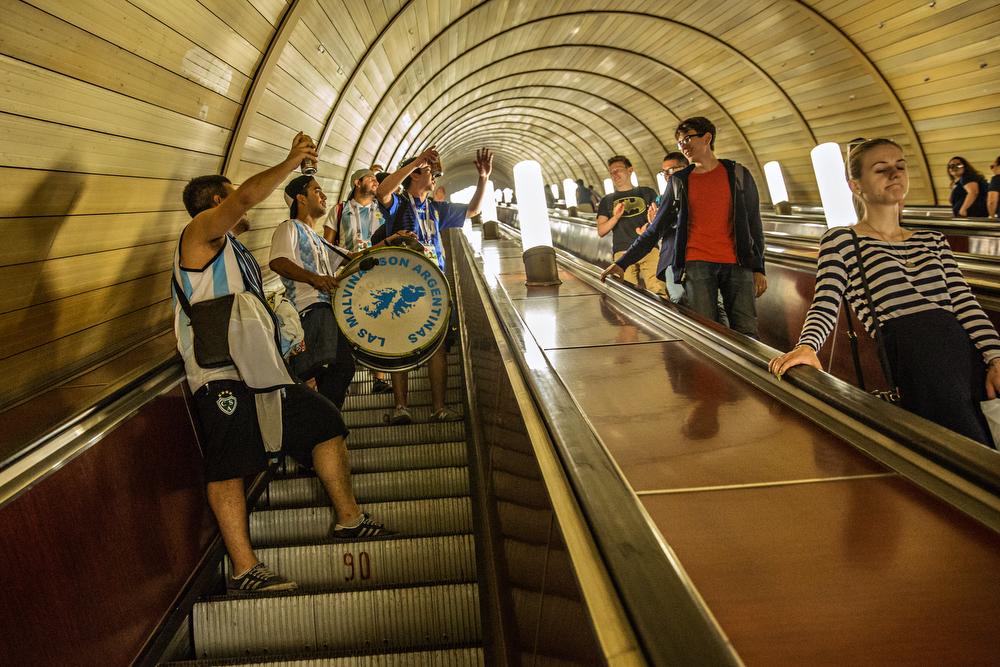 Argentinian fans sing in support of the national team in a metro station in Moscow. The group members, who met at a hostel, will be traveling to all the cities following and supporting their national team despite being on a budget and occasionally selling scarves and T-shirts in order to pay for travel and tickets to the matches. 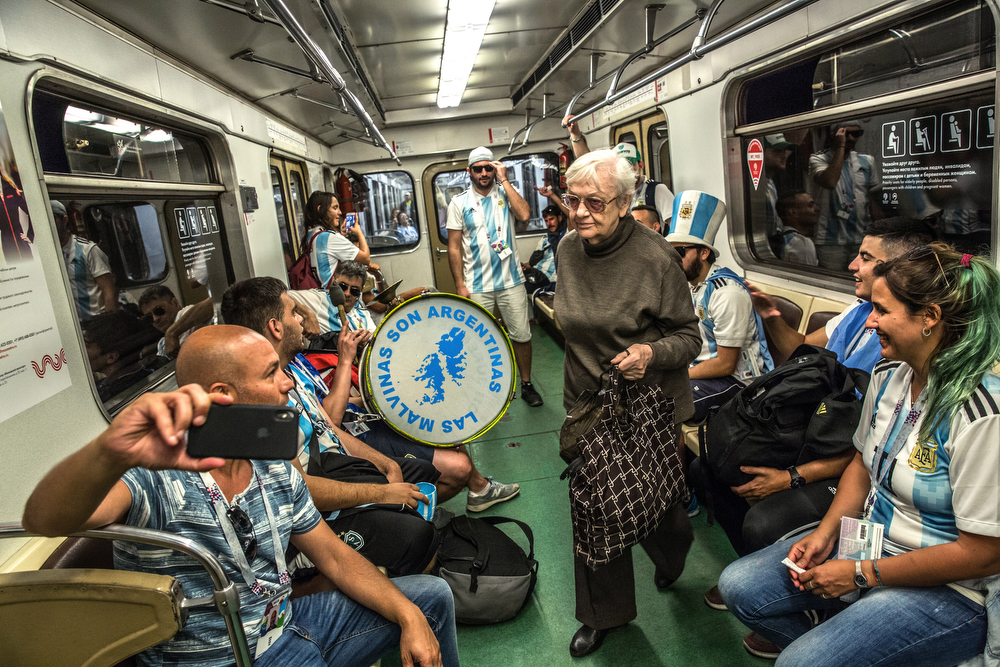 Once on a metro train, the group continues to sing. A local resident takes a selfie with the Argentinian fans as an elderly woman stuck in the middle exits the train. 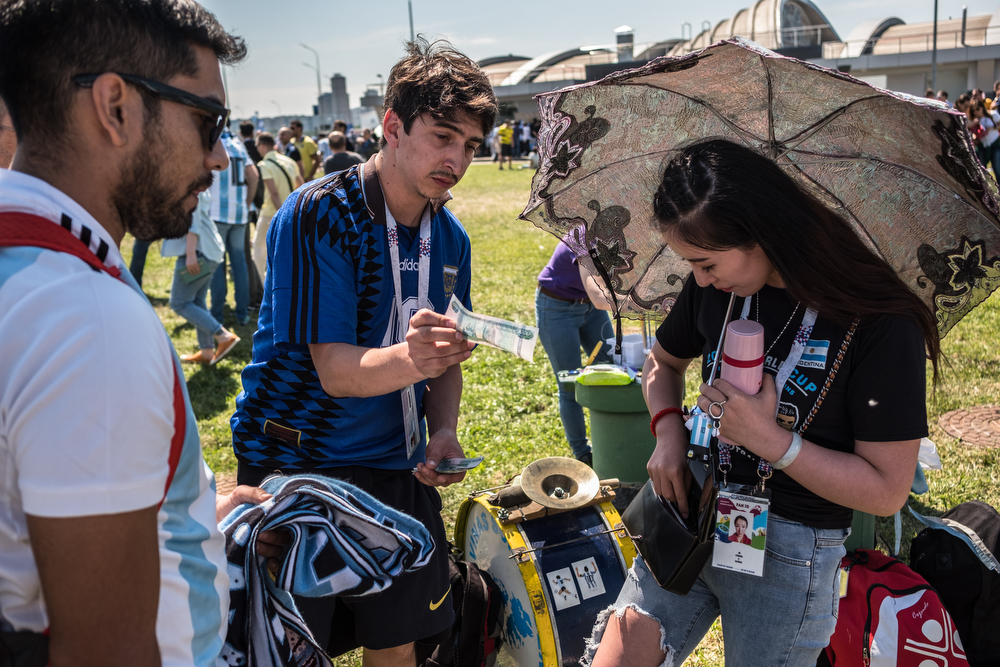 Elias Alanis shows a banknote for 1,000 Russian rubles to a Korean fan buying one of his Argentina scarves outside Spartak Stadium prior to the game against Iceland. Elias traveled on a tight budget, and to survive the month that he was going to be at the World Cup, he brought 300 scarves with the Argentina logo to sell. 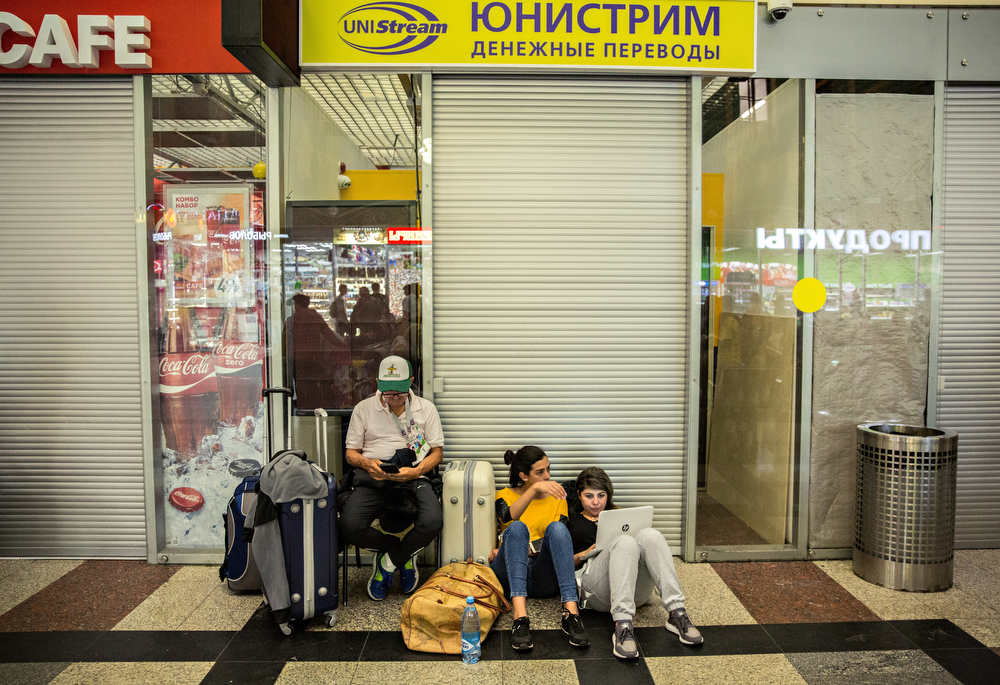 John Jairo Builes (left) with his daughter Nicole Builes (center) and niece Wendy Colorado (right) wait at the Moscow Central train station for the call to board the train to Saransk. The family traveled from Medellin, Colombia, and were part of the FIFA lottery and won tickets to all four of Colombia's games at the World Cup. After John Jairo retired last year from his business selling auto parts, he has been planning this family trip for his older son Mauricio after he missed out on traveling to the World Cup in Brazil. 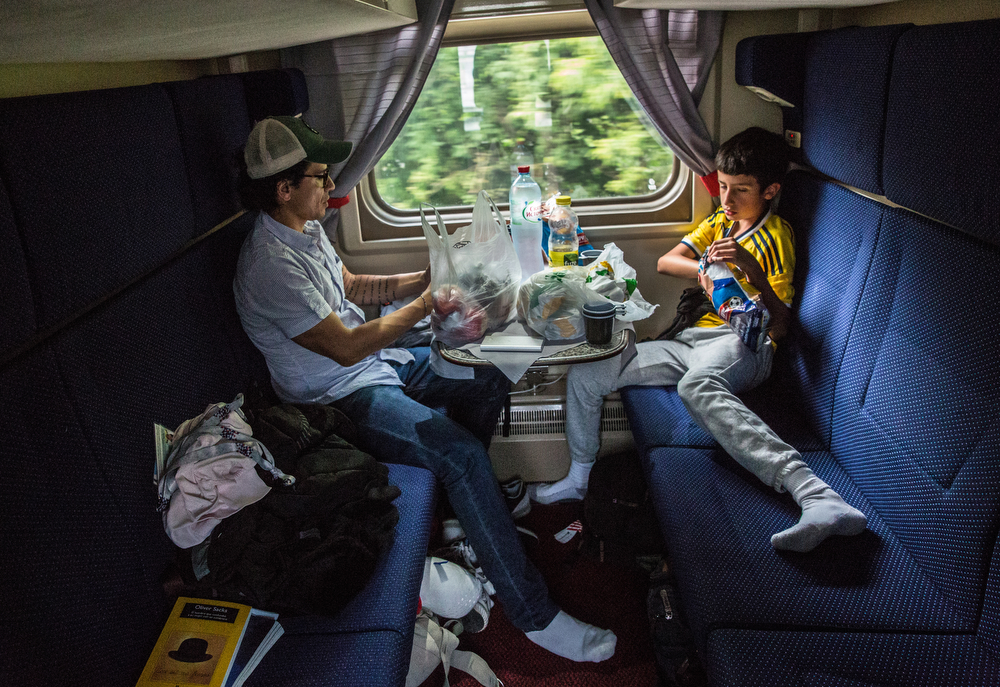 Mauricio Builes with his little brother Isaac Builes have a snack on board the train from Moscow to Saransk to see the Colombian team play their first match of the World Cup against Japan. 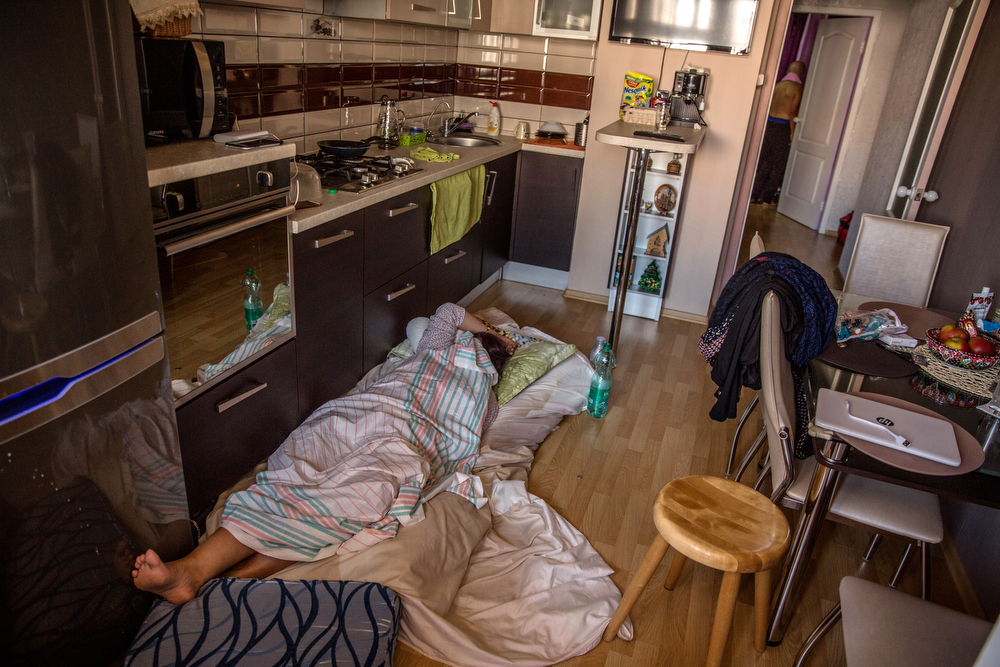 Ruby Arbelaez sleeps on the floor of the kitchen at an apartment in Saransk. She traveled from Sicily to meet with her sister and family to attend the Colombian match. 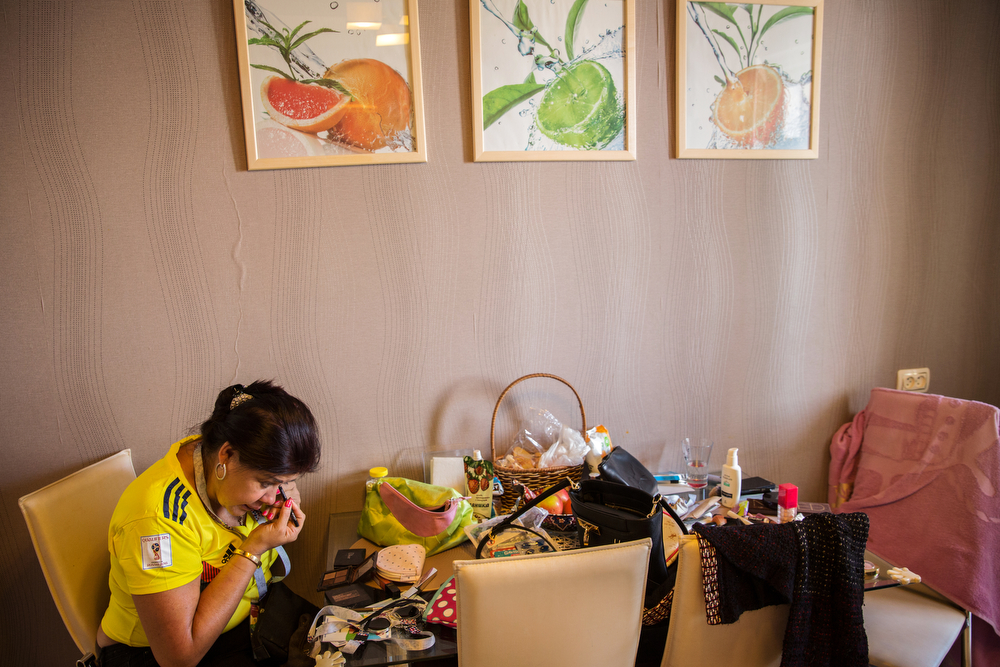 Arbelaez puts on makeup as she and her relatives prepare to attend the Colombia-Japan match in Saransk. 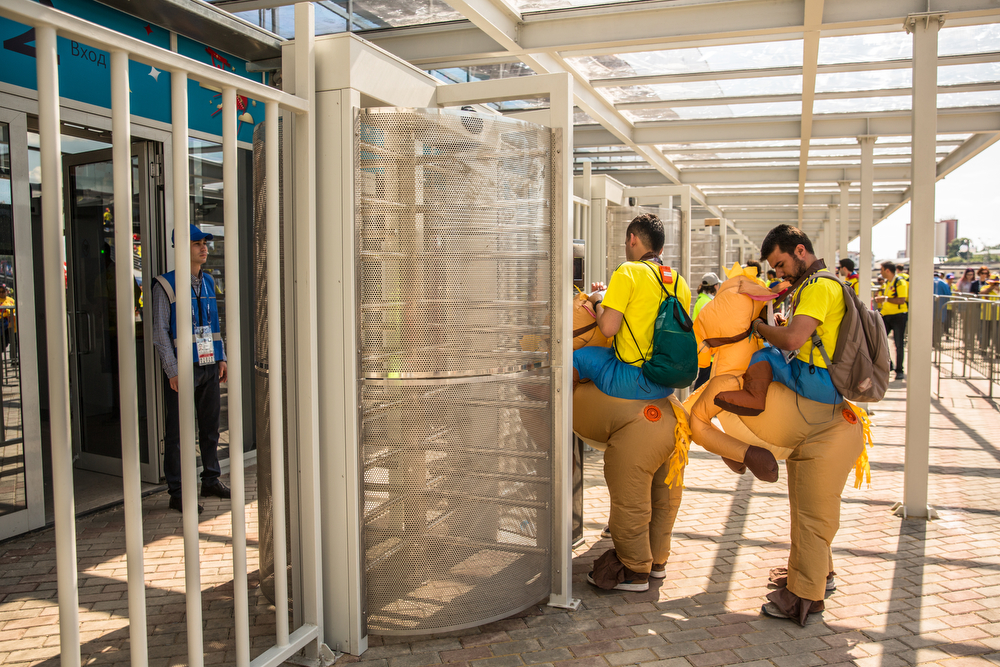 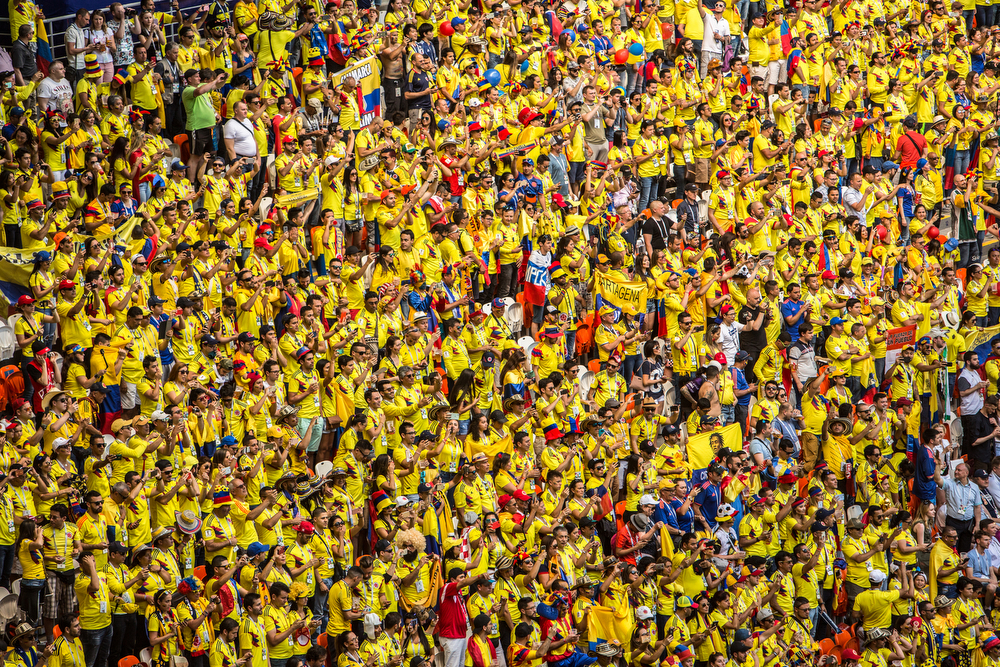 Colombian fans cheer after their team scored a goal against Japan, tying the match 1-1 in the first half. 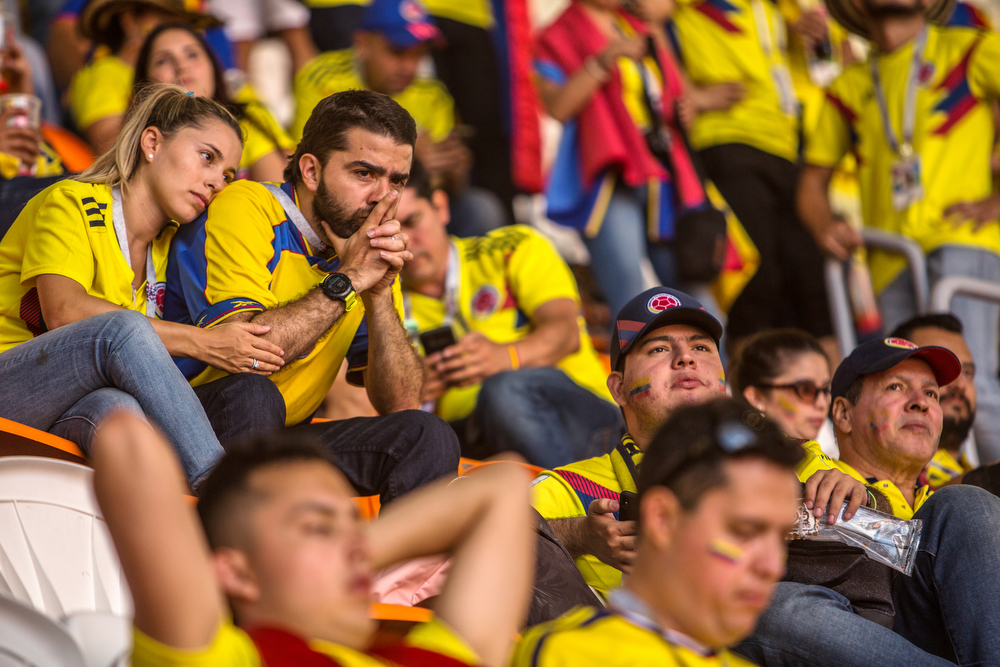 Upset Colombian fans react in the stands after their team lost the match against Japan 2-1. Many fans were confident that Colombia would win the match easily. 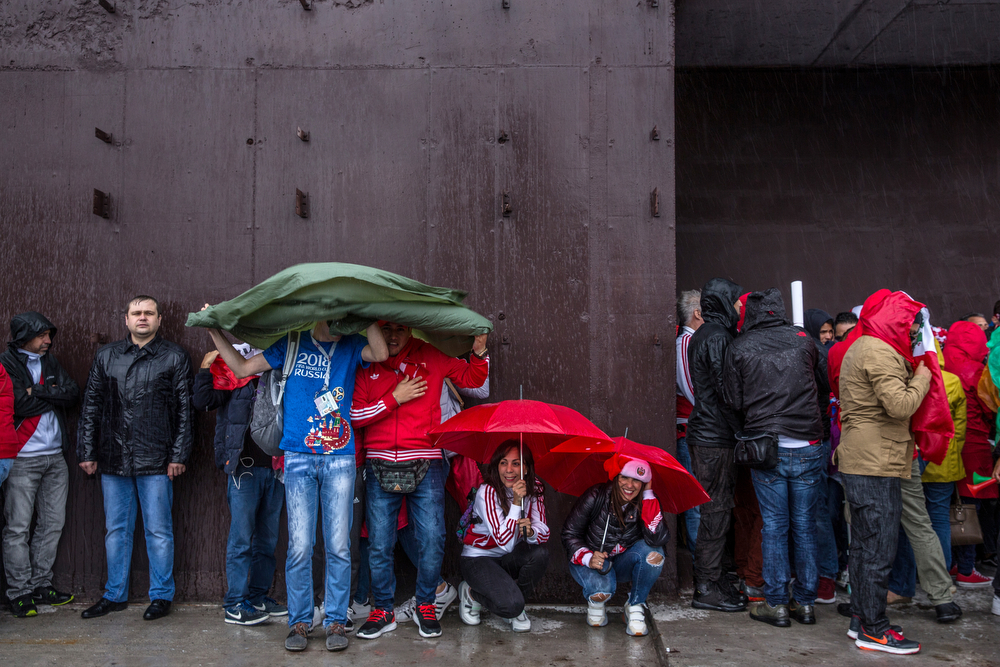 Peruvian fans seek refuge from the heavy rain outside the Yekaterinburg Central Stadium before the match between Peru and France. It had been 36 years since Peru played at a World Cup, and they drew one of largest fan bases to Russia. 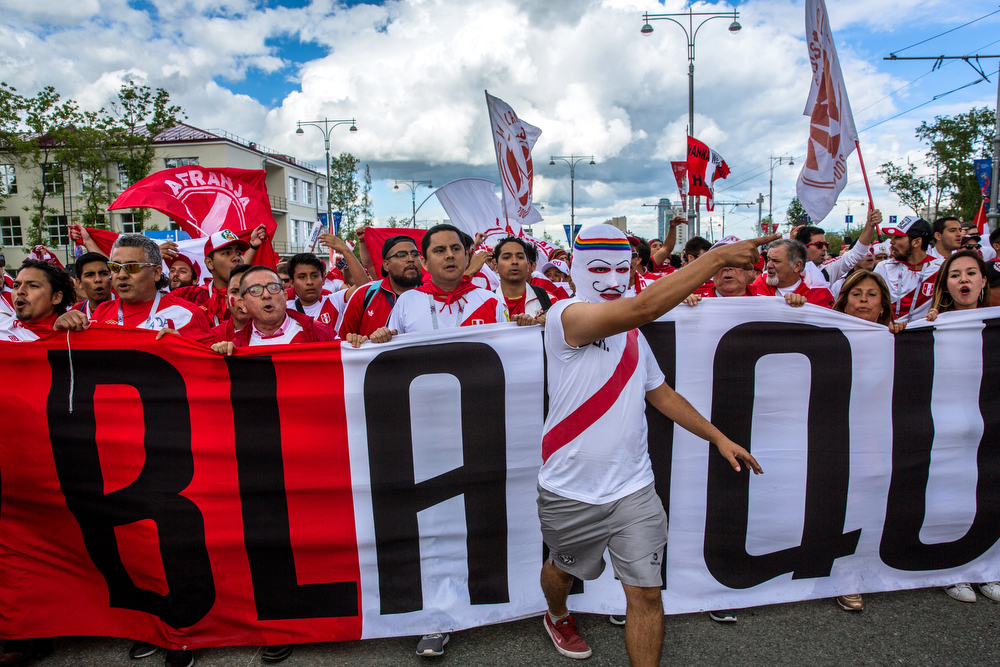 Fans of Peru's national team, known as the Blanquiroja, march through the streets of the city of Yekaterinburg before the match against France. 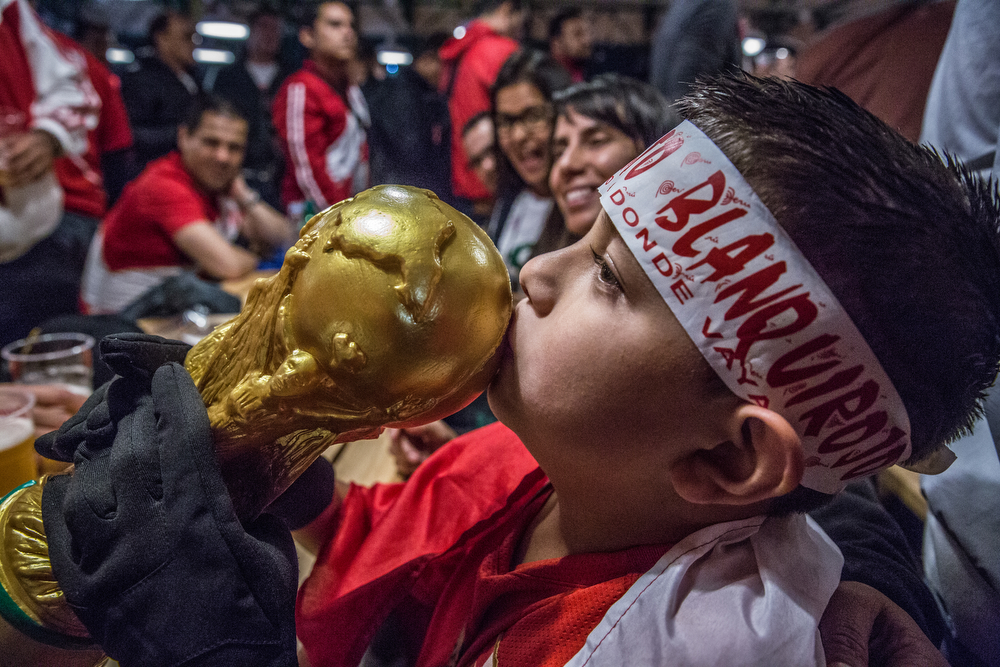 Despite the Peruvian team losing to France and not advancing to the knockout round, fans celebrated their country's first World Cup in 36 years on the streets of Yekaterinburg. 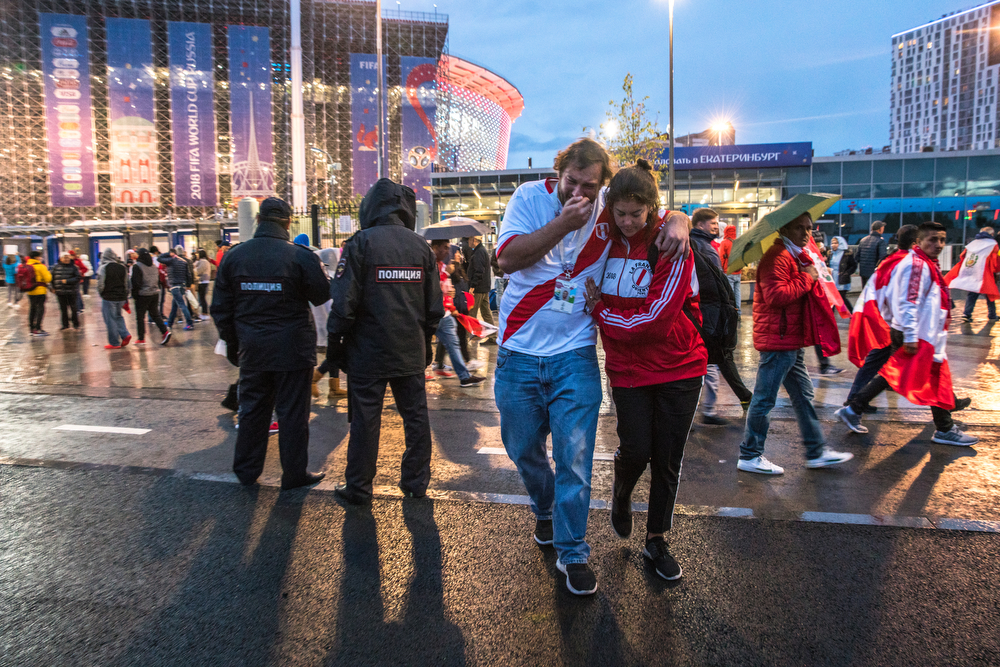 After the loss to France, Peruvian fans cry outside the Yekaterinburg Central Stadium. 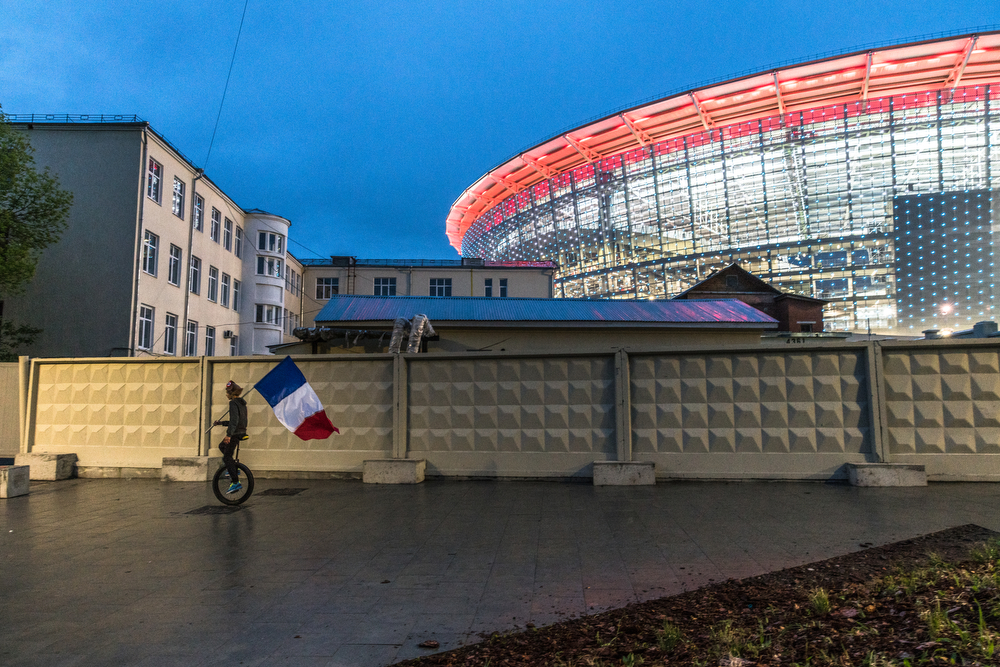 A teenage fan rides a unicycle carrying the French flag outside the Yekaterinburg Central Stadium after France defeated Peru. 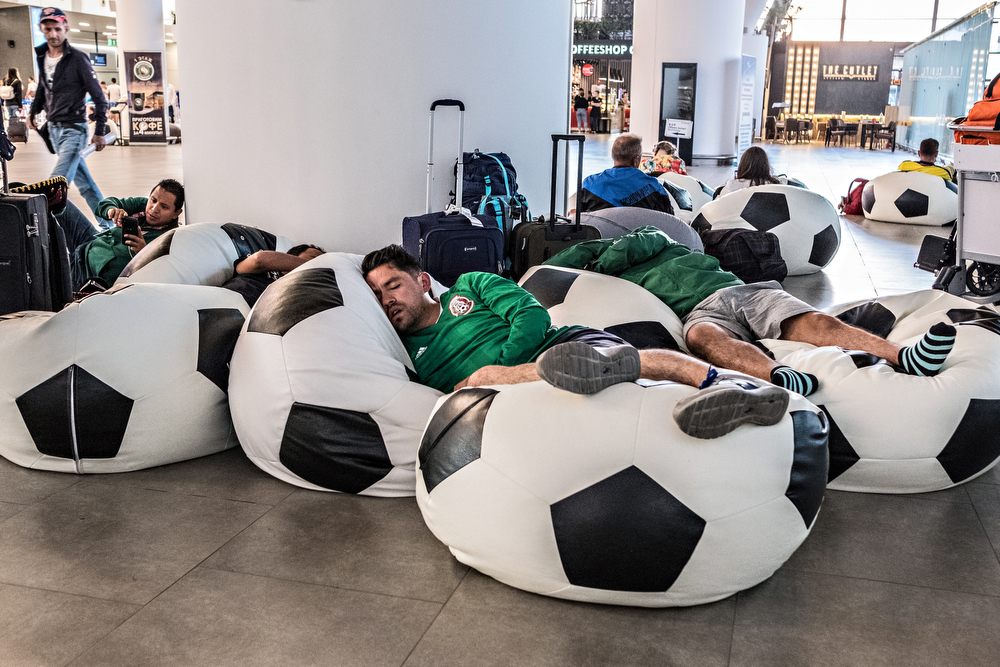 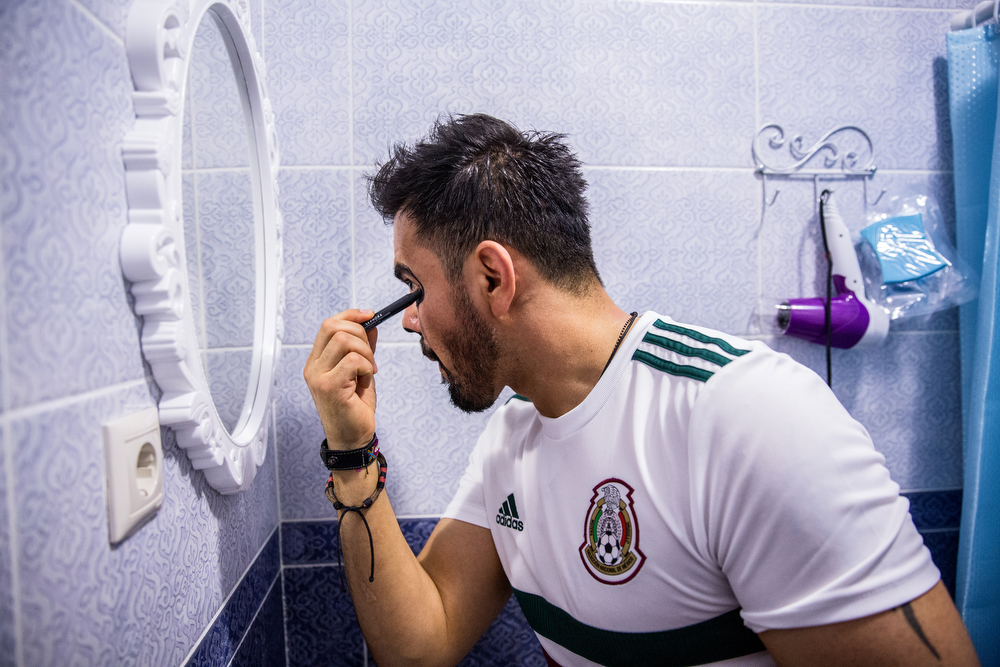 Carlos Flores, a dentist from Los Angeles, puts on makeup to look like a Catrina skeleton wearing a traditional mariachi outfit. Carlos has been dressing this way for every match that Mexico played since the 2014 World Cup in Brazil. 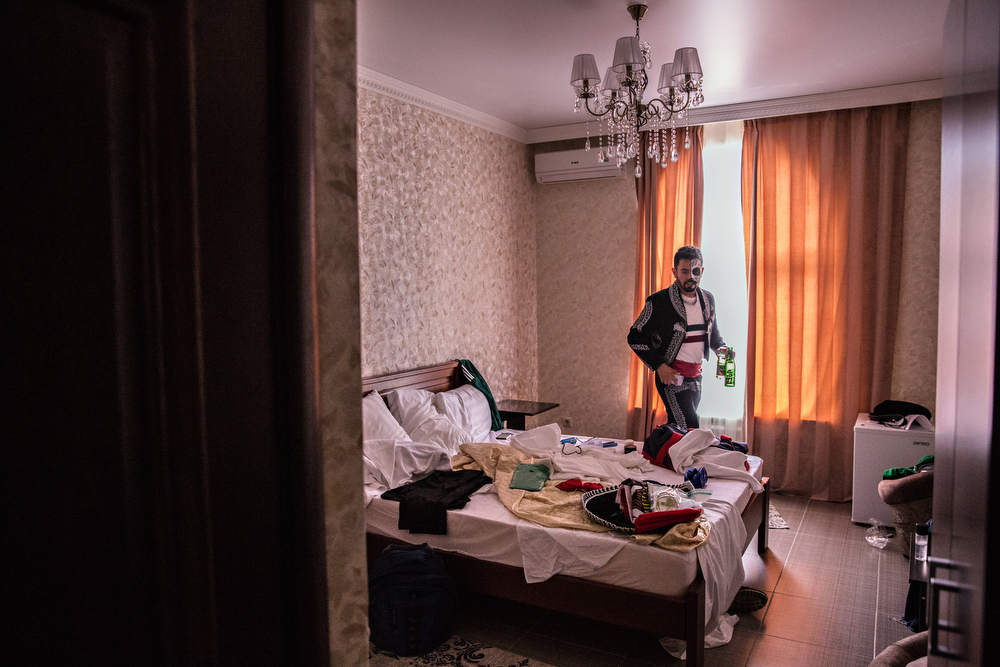 Flores finishes putting on a traditional mariachi outfit at his hotel room before attending the match between Mexico and South Korea at the Rostov Arena. 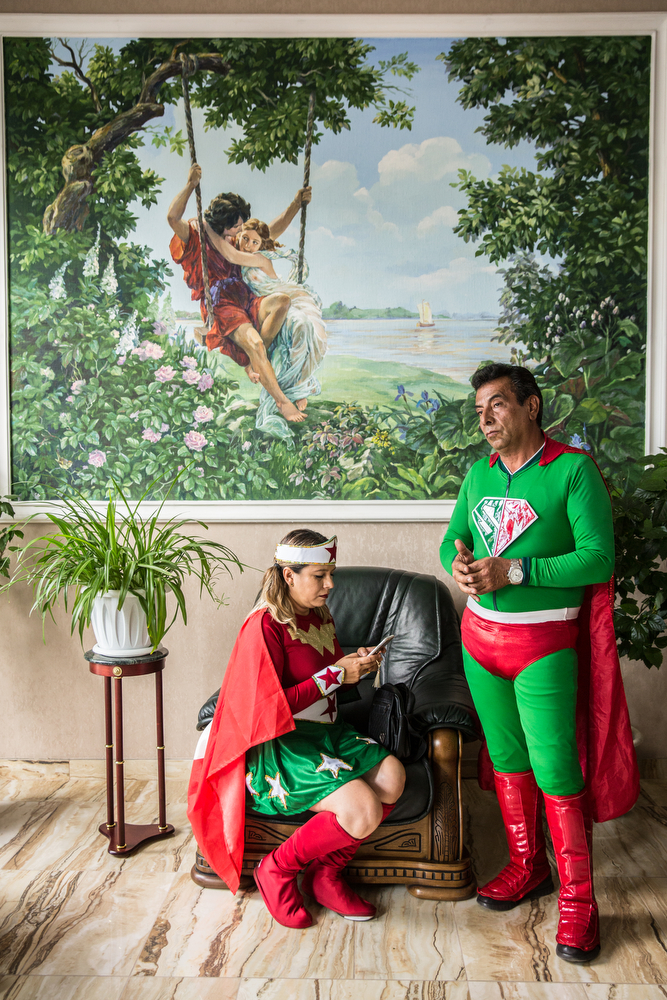 In the lobby of their hotel, Alfredo Allende and his wife, Fany Patron, dress as Super-Mexico and Wonder Woman. They traveled with friends and family to support Mexico. Alfredo first attended a soccer match wearing the costume with a friend at the Copa America in 2016. Once he found out that Mexico qualified for the World Cup, he suggested they all attend as Mexican superheroes. 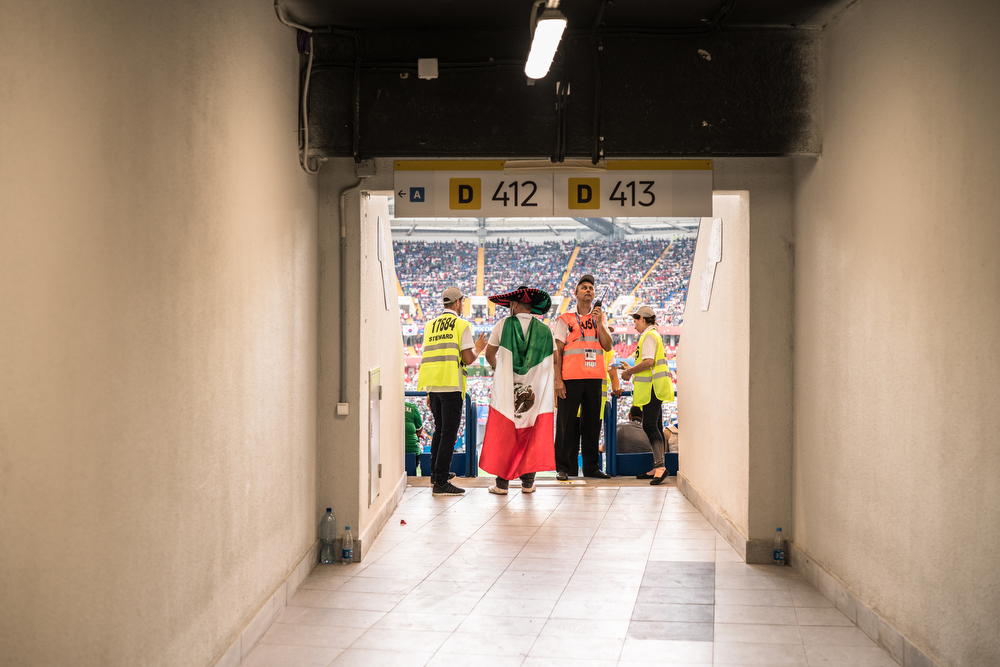 A Mexican fan wears a flag at the match between Mexico and South Korea at the Rostov Arena. 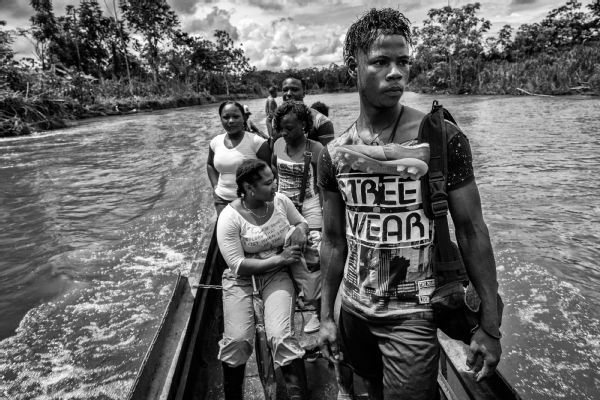 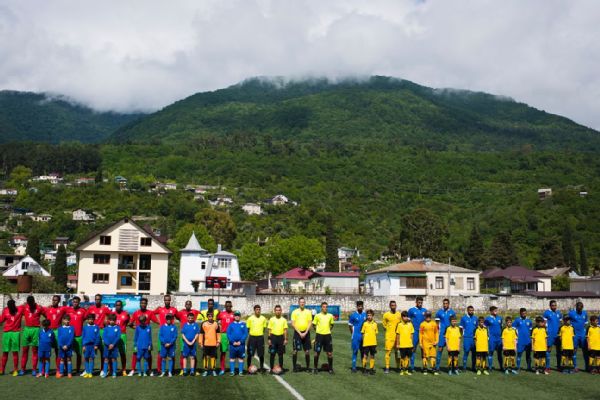 A World Cup for the rest of the world 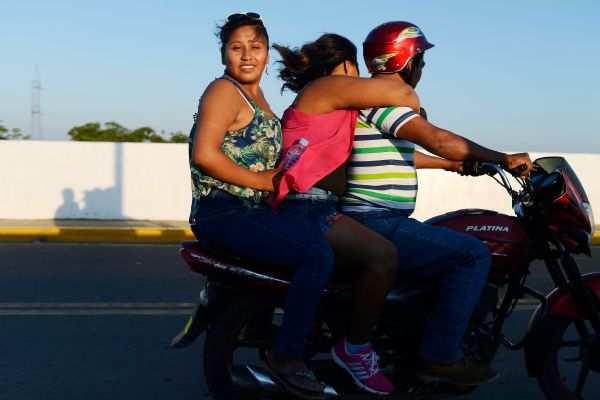 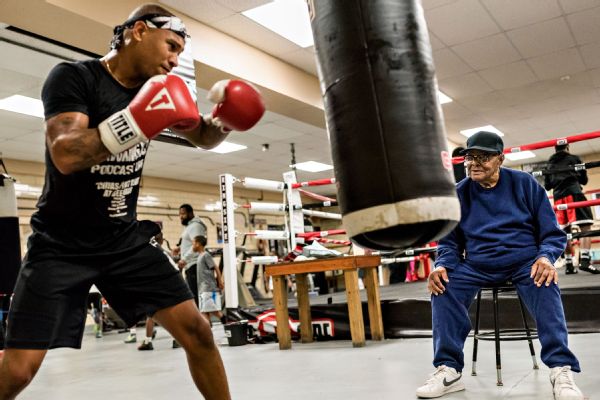 When boxing is life