It's the first Sunday in November, and Peter Ciaccia is about to board the 5:30 a.m. ferry to Staten Island. He's on his way to the start of the New York City Marathon with hundreds of runners. This is something the 65-year-old has done for the past decade, and it will be his final ride as the marathon's race director.

With every step, someone stops Ciaccia to say hello. He graciously shakes hands, takes selfies and greets marathon runners without missing a beat. "That's the famous Ciaccia," one of the runners quietly says to a friend.

In this world, the running world, Ciaccia is a rockstar. He's worked for the New York Road Runners, the event's organizer, for 18 years and has been the race director for the last four. Jim Heim, 41, senior vice president of event development and production for NYRR, will take his place. And in just a few hours, more than 50,000 runners from all around the world -- pro, amateurs and everyone in between -- will embark upon a 26.2-mile journey through New York's five boroughs. Every minute of Ciaccia's day from 5 a.m. until past 11 p.m. will be spent with the marathon runners. And that's just the way he likes it. He wants to take it all in with them. "I'm with my peeps," Ciaccia says. "These are my peeps.

"I'm a native New Yorker. I love New York. This marathon embodies the fabric of the city. That's what this marathon is to me. It's truly iconic. It's the greatest day in New York, as far as I'm concerned."

With less than three hours before the race begins, Ciaccia's movements quicken as soon as he arrives on Staten Island. Between now and the 8:30 a.m. start for professional wheelchair division, Ciaccia will check in with his security team, do an interview with abc7NY, connect with hundreds of volunteers, colleagues and government officials, review the schedule for the day and familiarize himself with the starting podium.

But before it all begins -- and for Ciaccia, before it all ends -- he starts to run past the start line and up the nearly empty Verrazano-Narrows Bridge. Soon, a sea of runners will overtake the bridge, but for now it's just Ciaccia admiring the view. Until the final runner crosses the finish line late into the night, Ciaccia will continue to take it all in. He'll continue shaking everyone's hand, taking endless selfies and embracing his last day as race director. 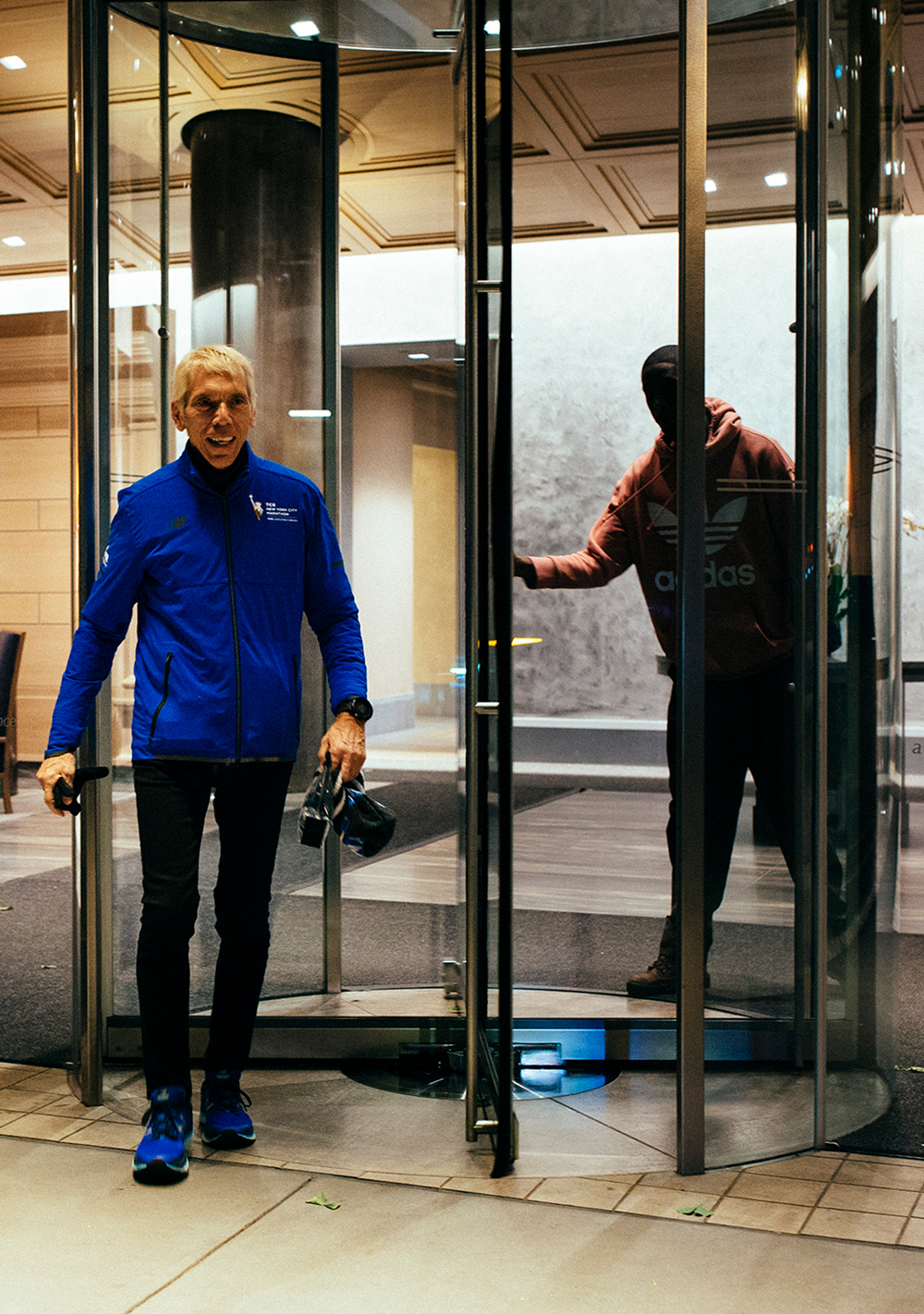 Starting his day at 4:30 a.m., Peter leaves his apartment on the Upper West Side of New York before making the trip to his final New York City Marathon start in Staten Island. 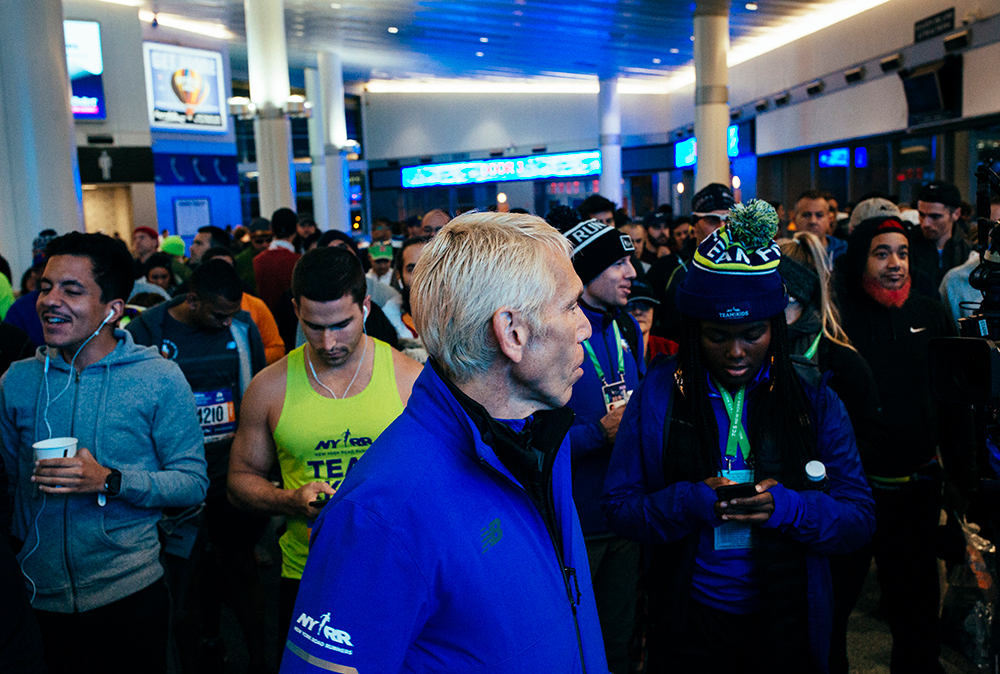 During his tenure, Ciaccia dreamed up the idea of marathon participants traveling on the Staten Island Ferry to the start line. Since, he's made a point to join the hundreds of runners on the first ferry at 5:30 a.m. 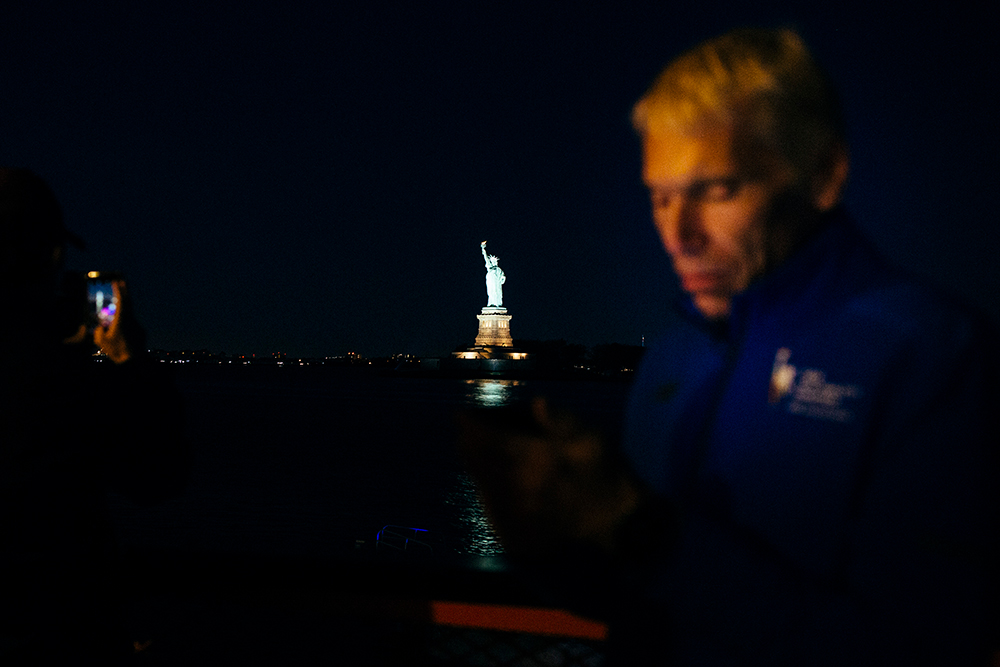 The Statue of Liberty shines behind Ciaccia as he takes a moment to reflect. "I've been trying to keep myself extremely busy and not focus on the emotional part of [the marathon] being my last," says Ciaccia, standing on the deck of the Staten Island Ferry. "But it creeps itself back in there." 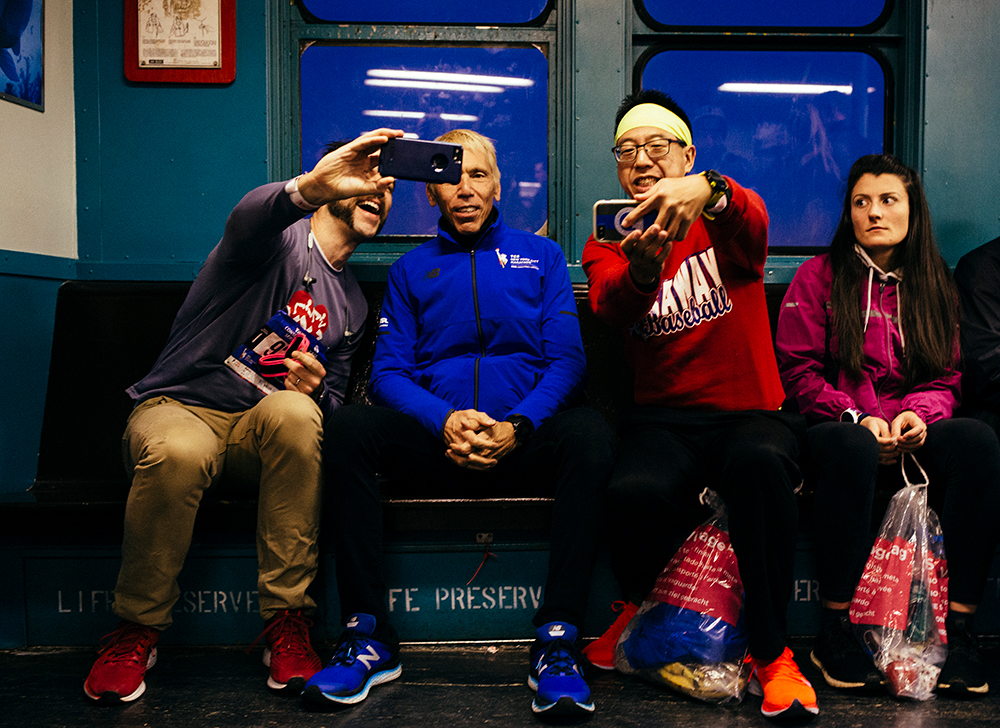 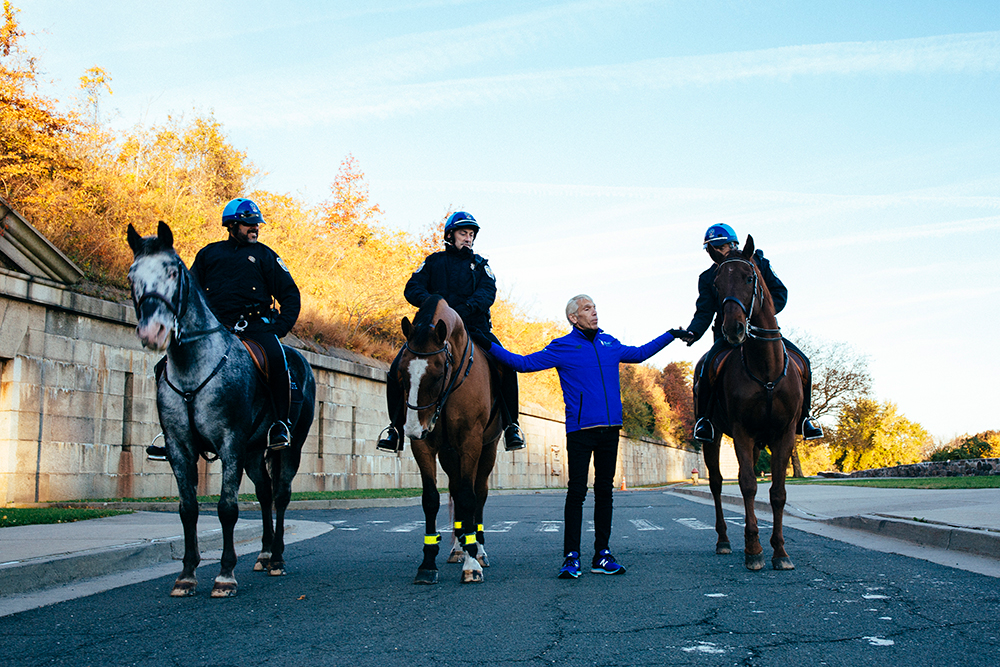 Just hours away from the start of the marathon, Ciaccia checks in with volunteers and government officials who make race day possible. Even those with four legs. 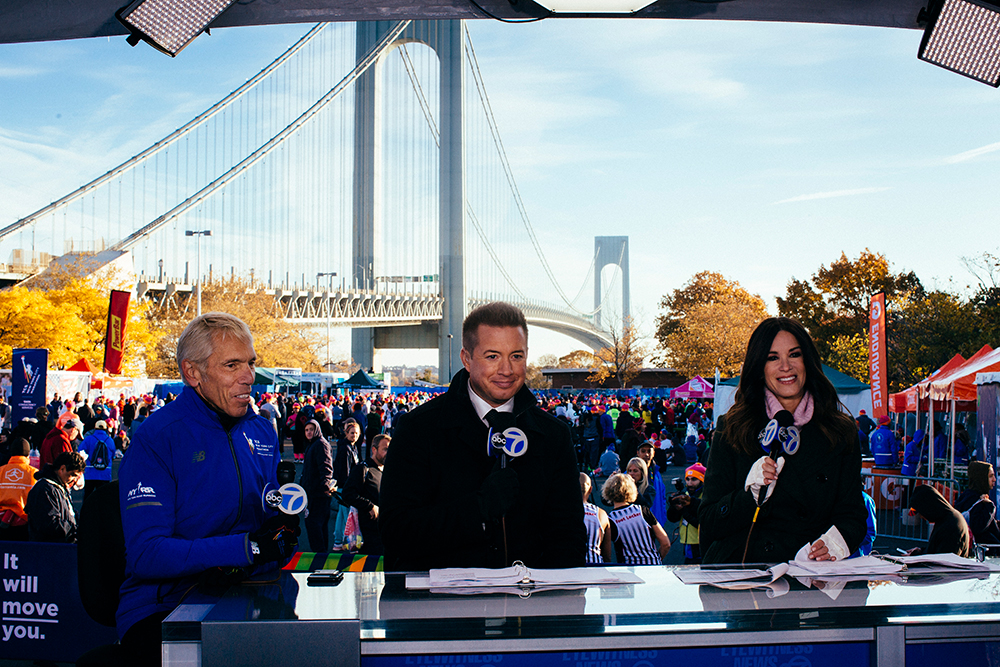 Every minute leading up to the 8:30 a.m. start is jam-packed for Ciaccia. That includes a quick interview with abc7 broadcast team Ryan Field and Sam Ryan. 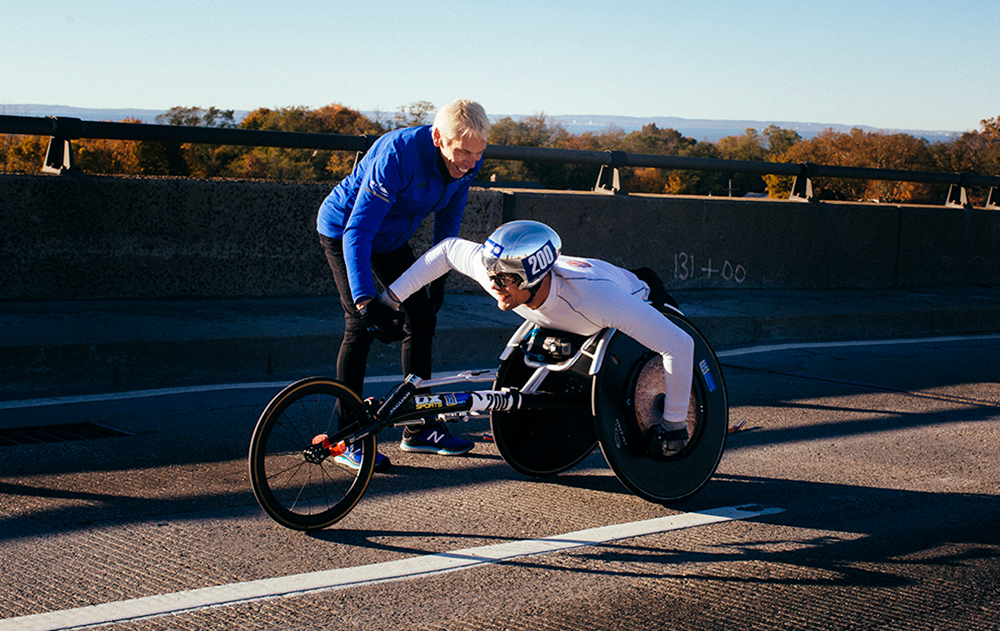 Marcel "The Silver Bullet" Hug, the defending champion of the New York City Marathon, high-fives Ciaccia prior to the professional wheelchair division start. 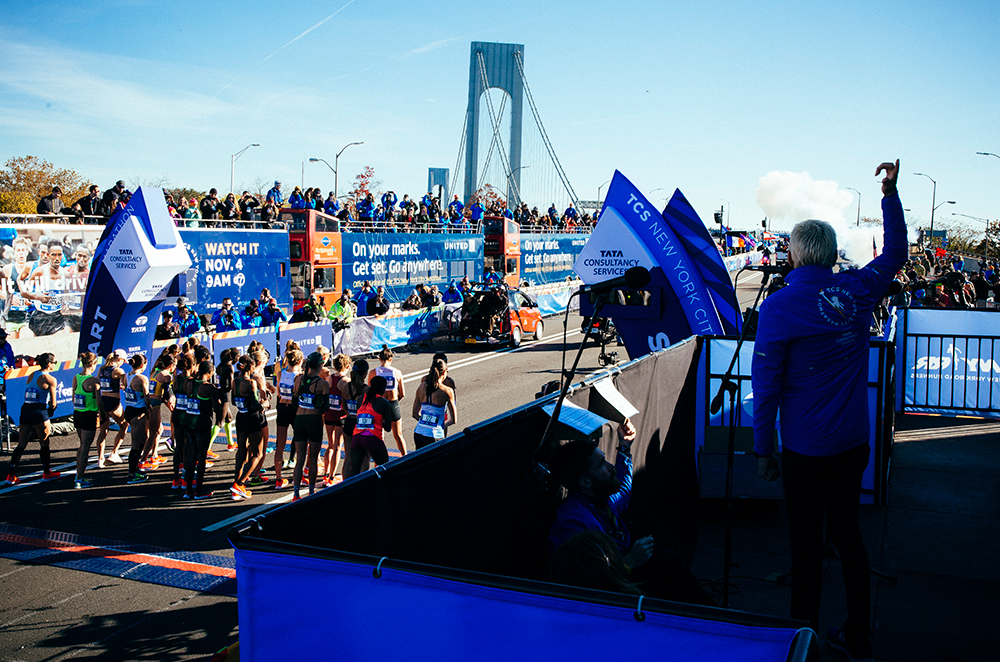 Ciaccia calls for the starter to fire the howitzer for the women's elite division. "Do I have clearance on the roadway?" is his famous call. 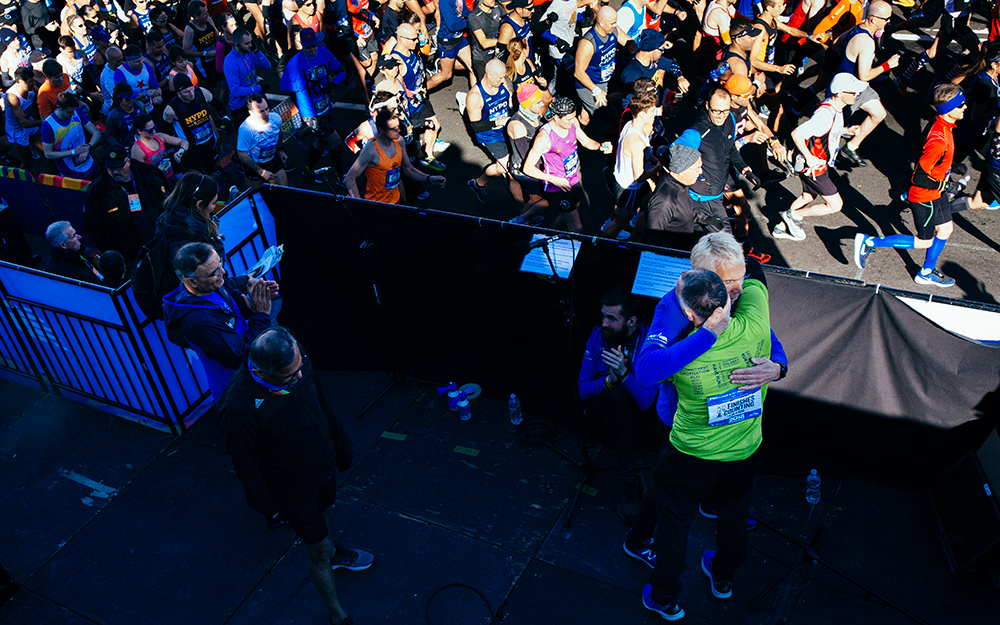 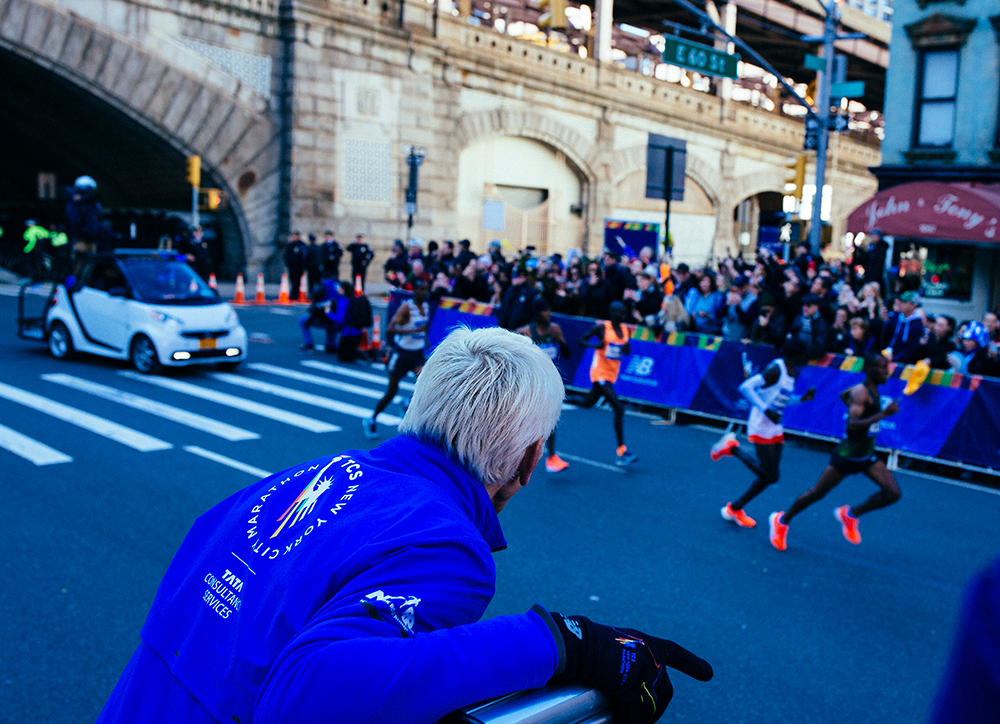 Ciaccia watches the men's professional race closely, as Lelisa Desisa of Ethiopia pushes forward to surge ahead of the other runners before finishing first in a time of 2:05:59. 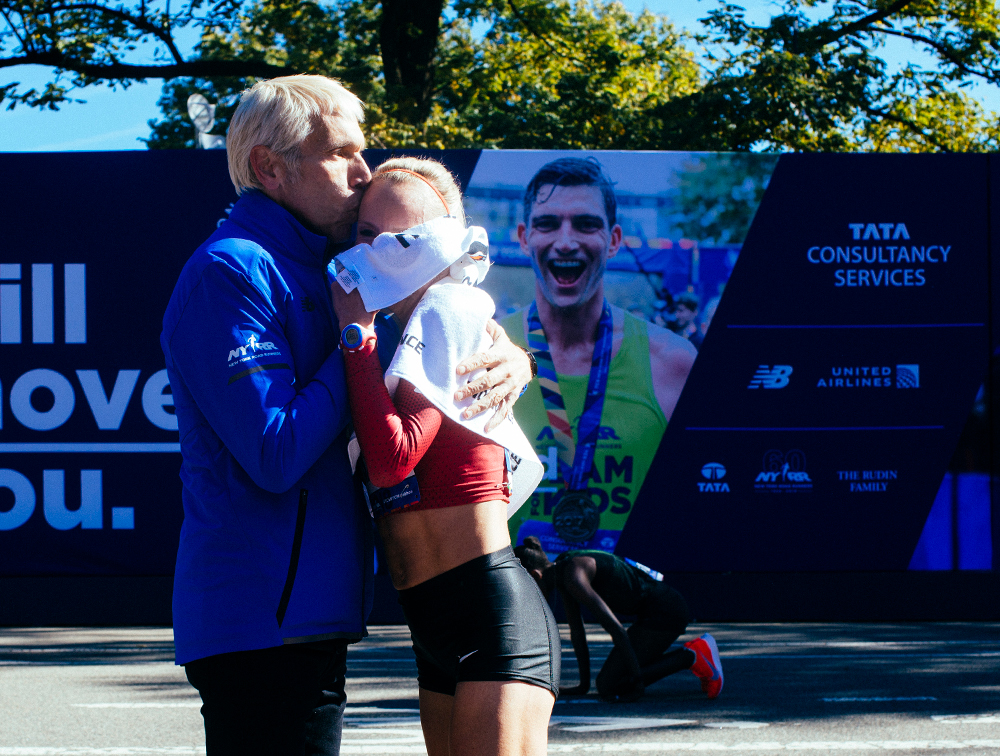 Defending champion Shalane Flanagan ran New York again because, as she said, she "couldn't pass up being a part of Peter Ciaccia's last race." Flanagan finished third this year. 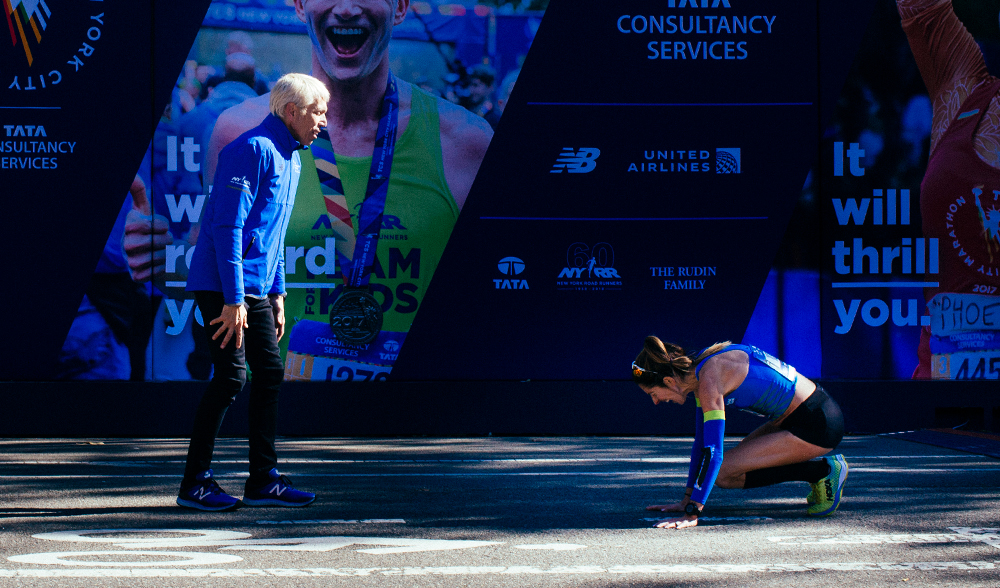 "It's quite emotional to stand there and share in the joy of all these runners as they cross the finish line," Ciaccia says. "I live through the runners." Here, Ciaccia encourages elite runner Stephanie Bruce, who just finished in 11th place. 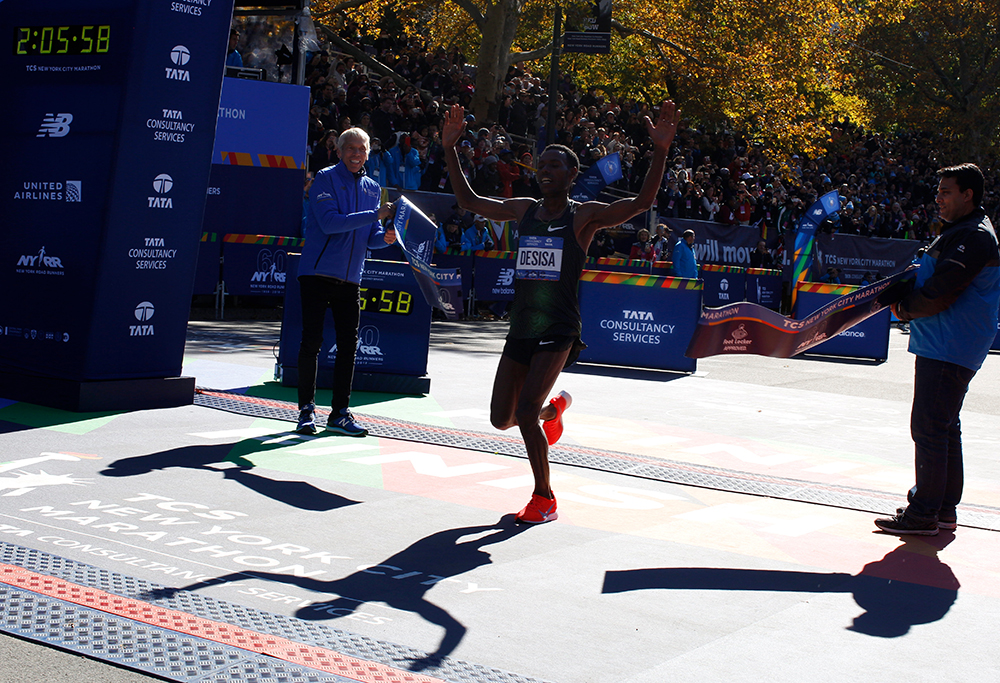 For the last time, Ciaccia holds the tape for the men's elite race. Next stop for Ciaccia? "I certainly want to get back to running and training," he says. 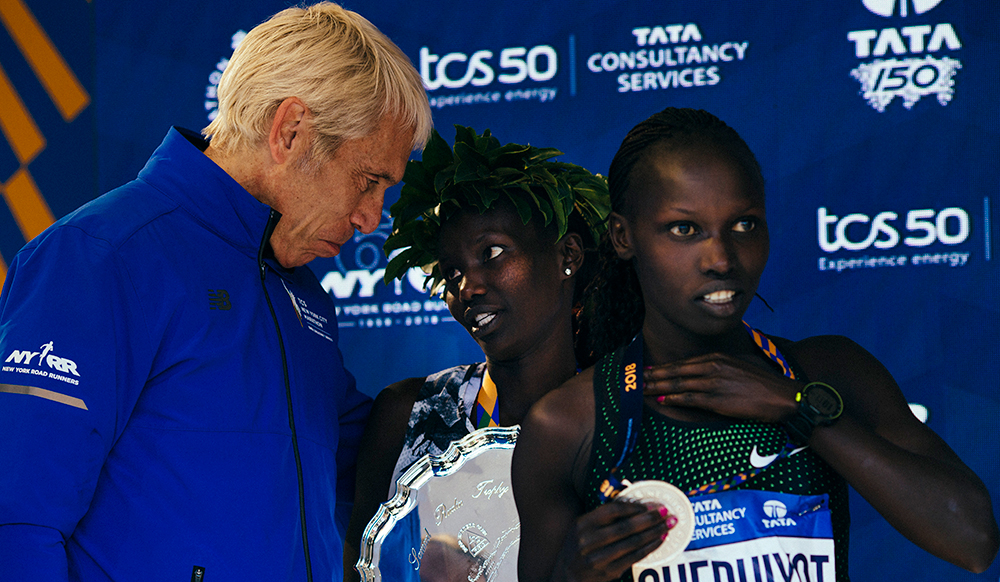 Kenyan Mary Keitany (center) became the third person to win the NYC marathon four times, three of which were under Ciaccia's reign as race director. 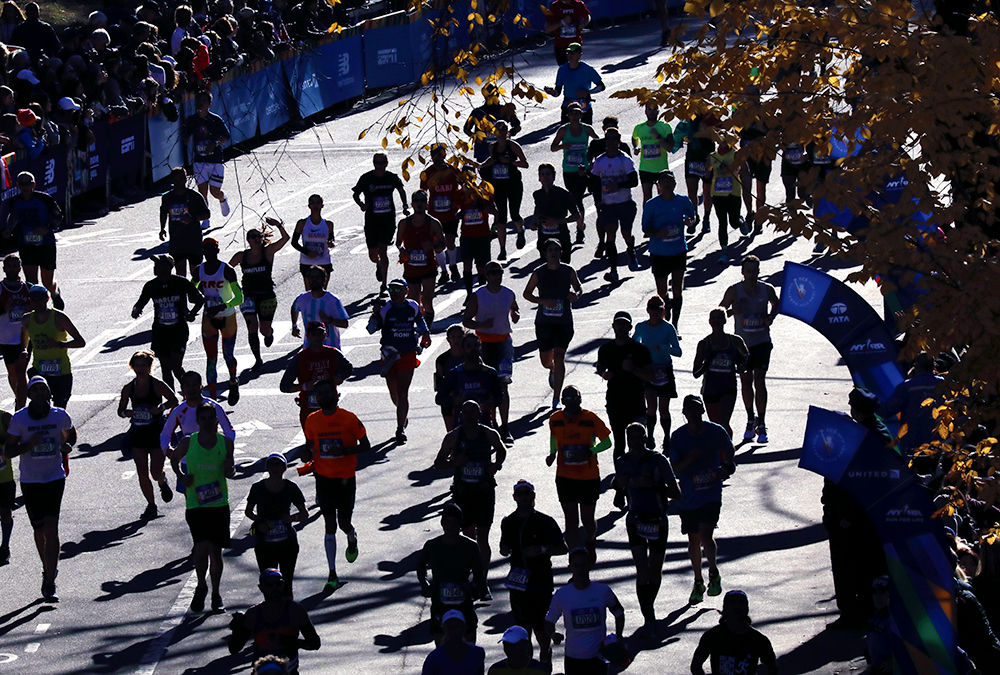 Under Ciacca's watch, the NYC Marathon continued to grow. A total of 52,812 runners crossed the finish line Sunday, breaking the record for the most finishers of any marathon in the world. The previous mark for the world's largest marathon was the 2016 New York City Marathon with 51,394 finishers. Peter Foley/EPA 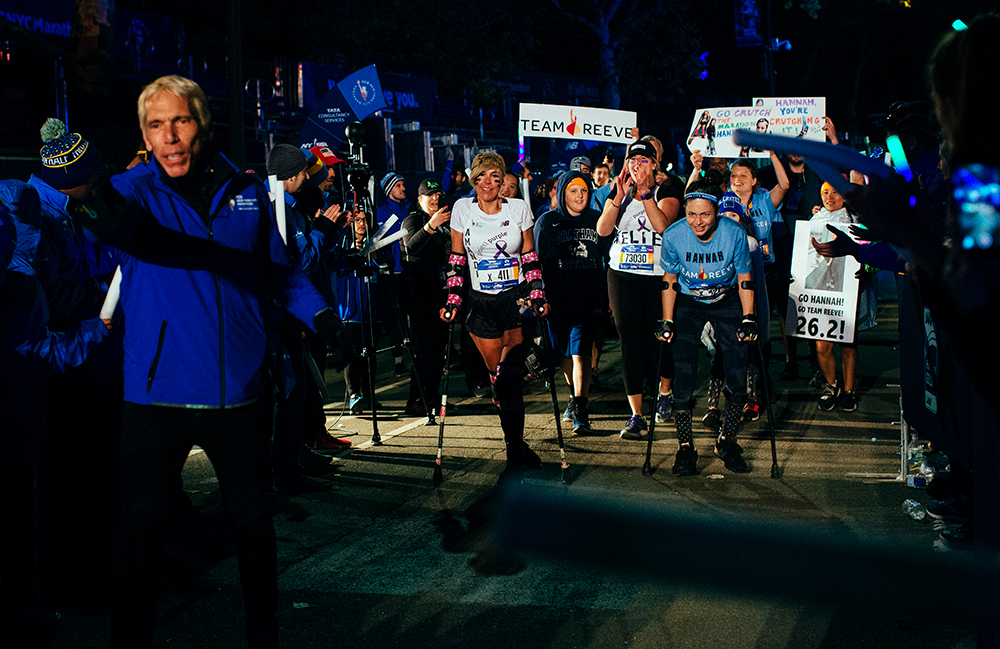 In 2016, Hannah Gavios (right in blue) fell 150 feet off a cliff while running from an attacker and became partially paralyzed. She completed the marathon using crutches, taking her more than 11 hours. "I didn't expect this many people," says Gavios, after crossing the finish line. "It just shows my city has my back. I don't know how long everyone waited for me -- it just means so much to me that you guys stayed." 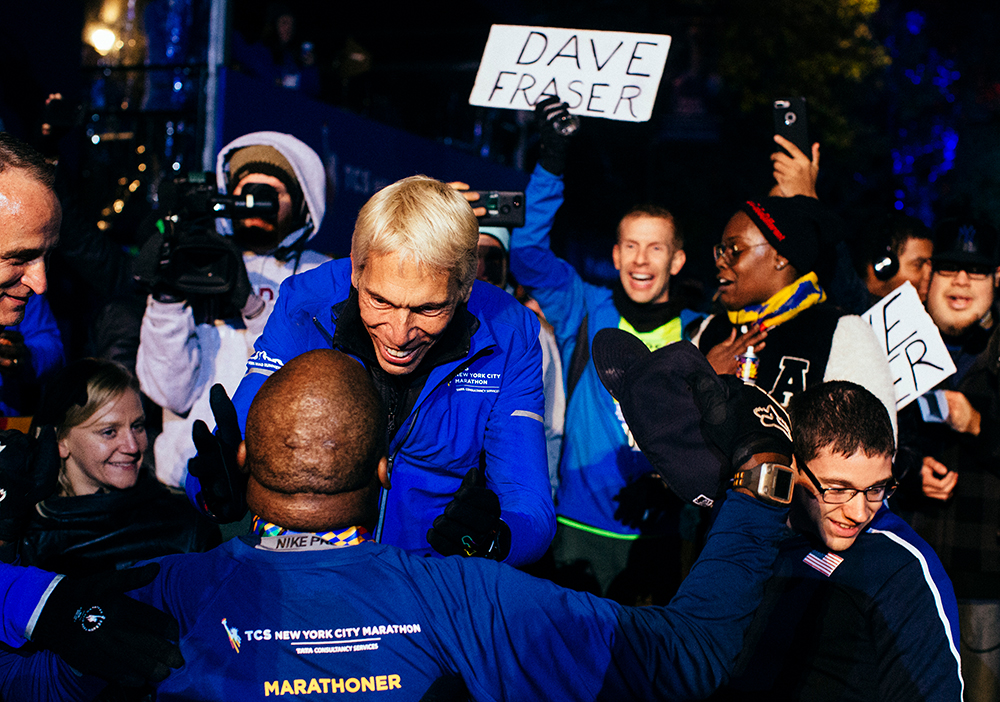 One of the final finishers, David Fraser was born with cerebral palsy, and to complete the marathon he had to push himself backward the entire time. Fraser has participated in 11 NYC Marathons. "He's unbelievable. It sends shivers up my spine to talk about it because it's so emotional and inspiring," Ciaccia says. 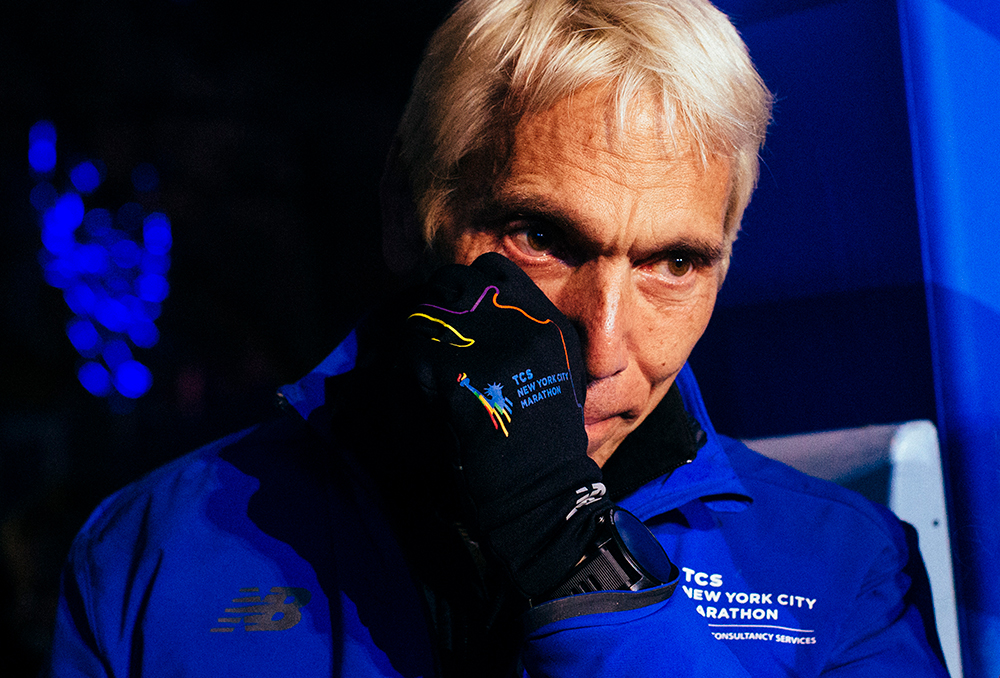 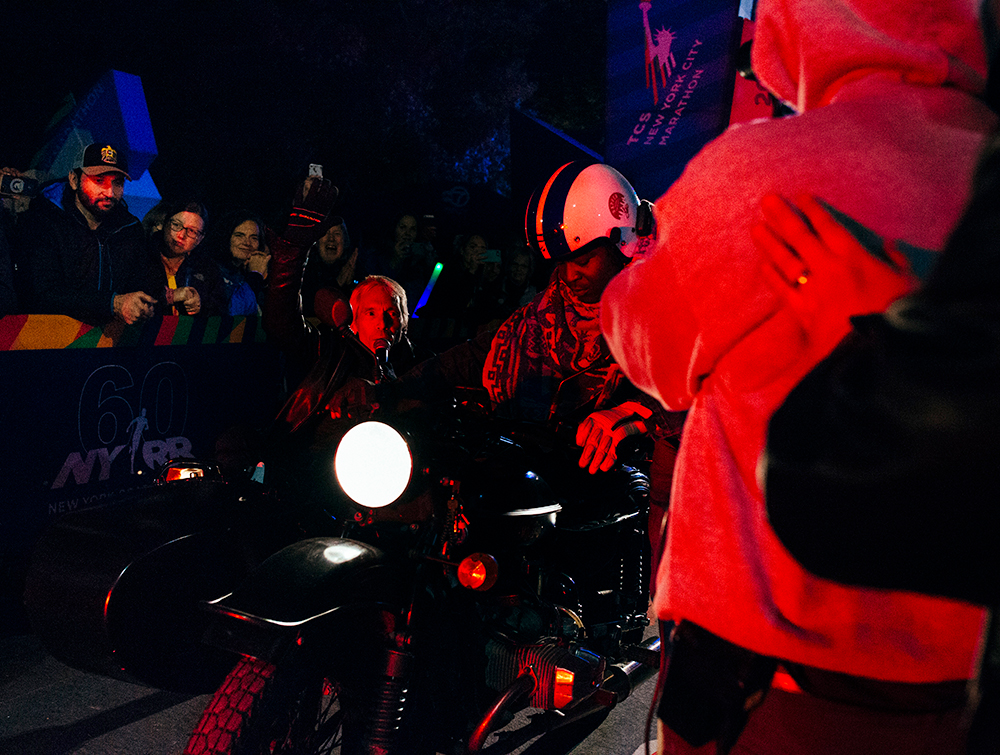 In his final curtain call as director, Ciaccia closes out his last marathon with a surprise exit. "If you know me, you know where I came from. I came from rock 'n' roll. And that's where I'm going back to," Ciaccia said as he throws on a leather jacket and hops in the sidecar of a motorcycle.
You May Also Be Interested In 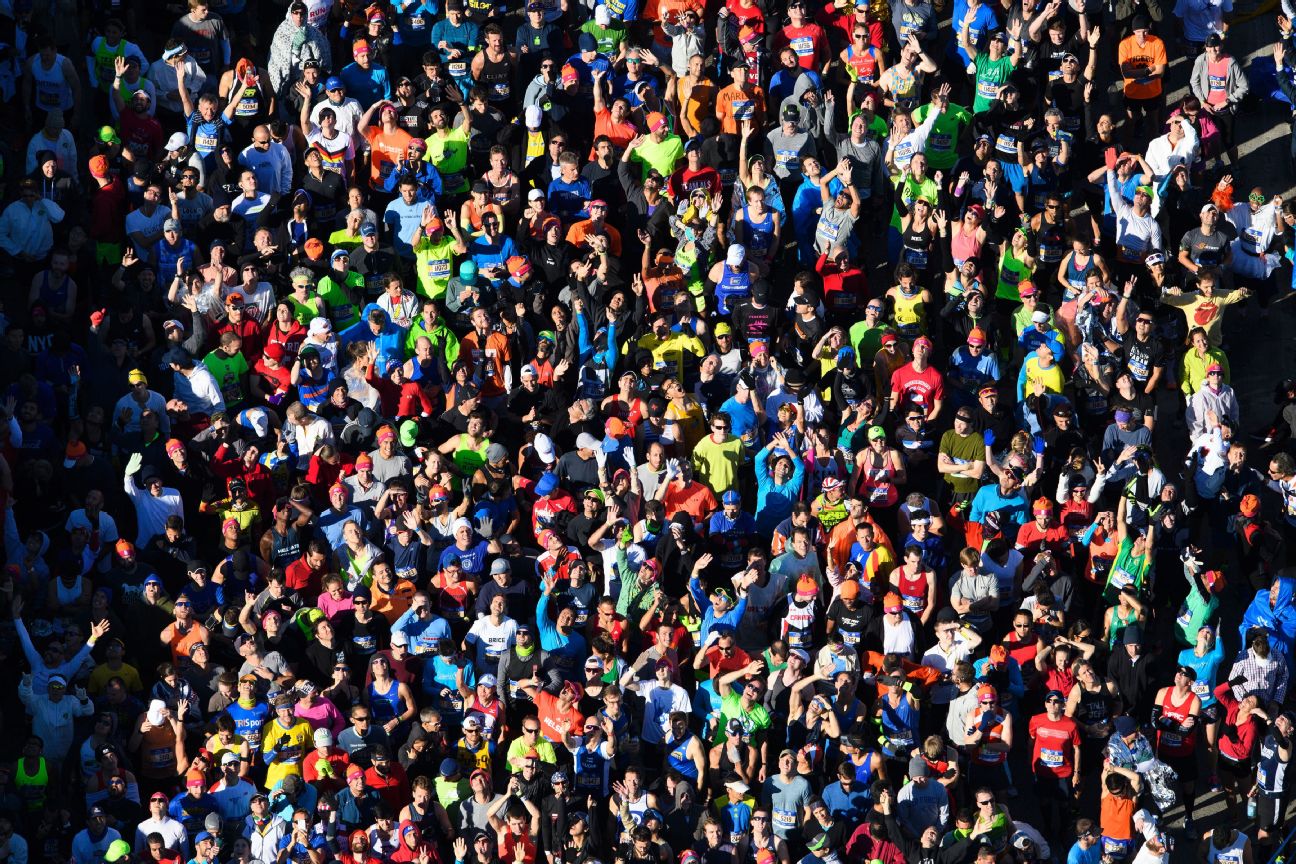 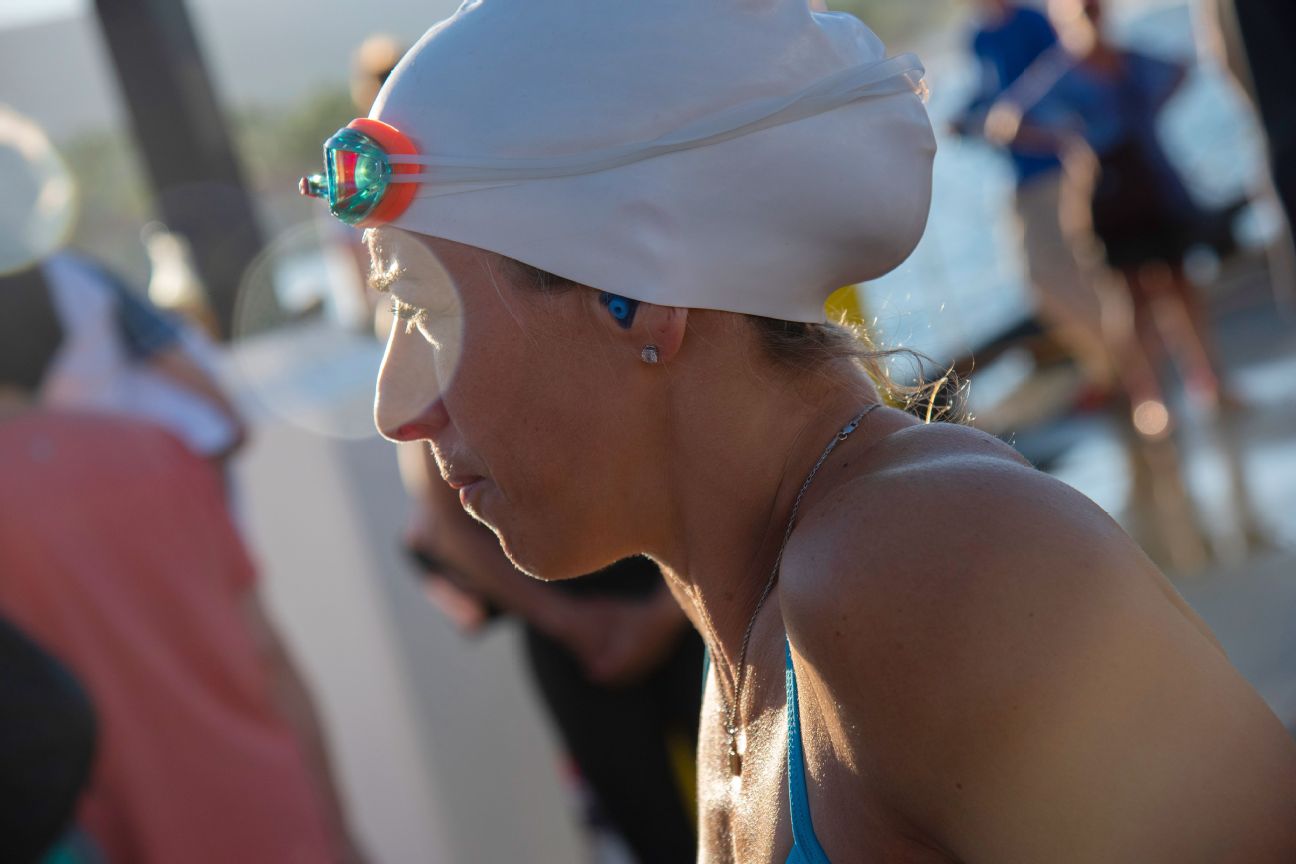 This is Iron Sarah 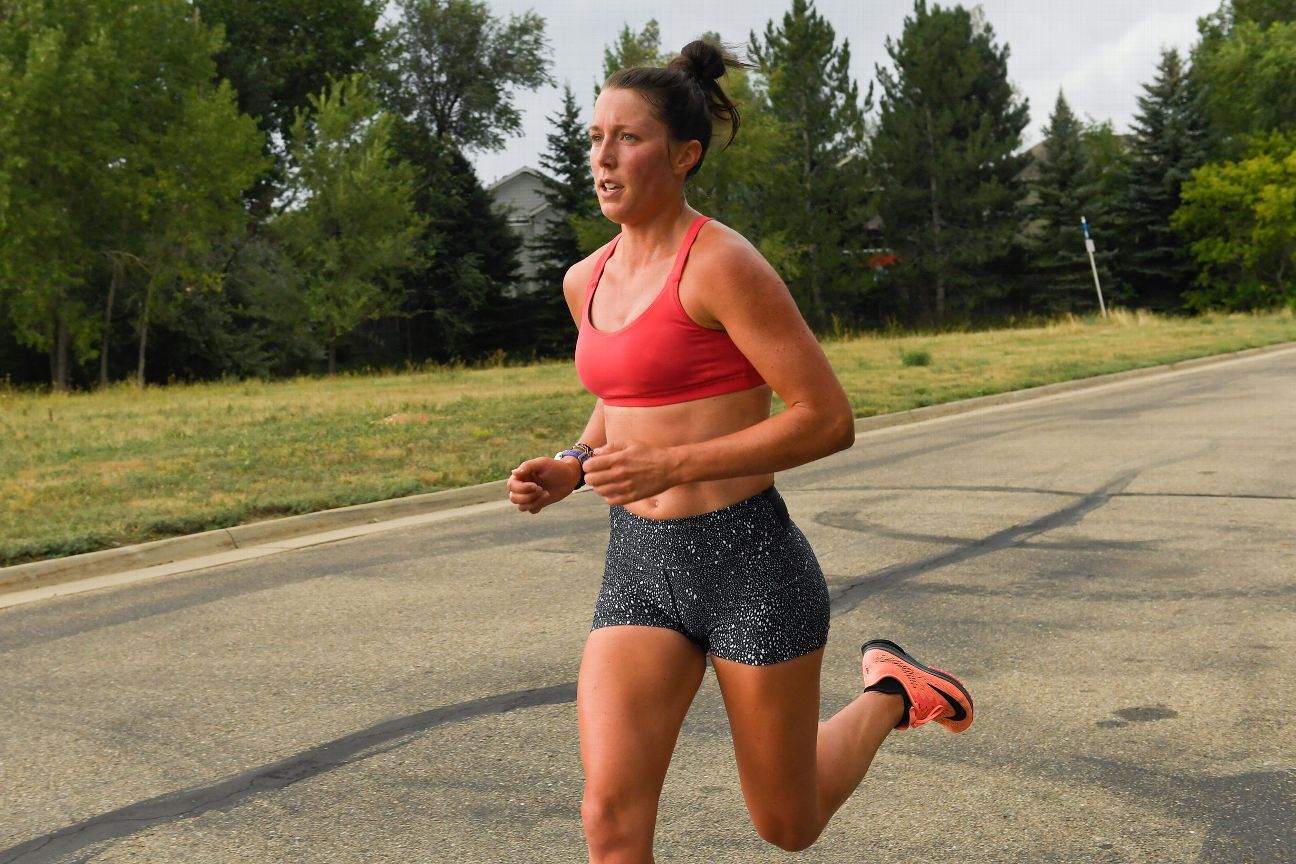 Allie Kieffer: Race of a lifetime 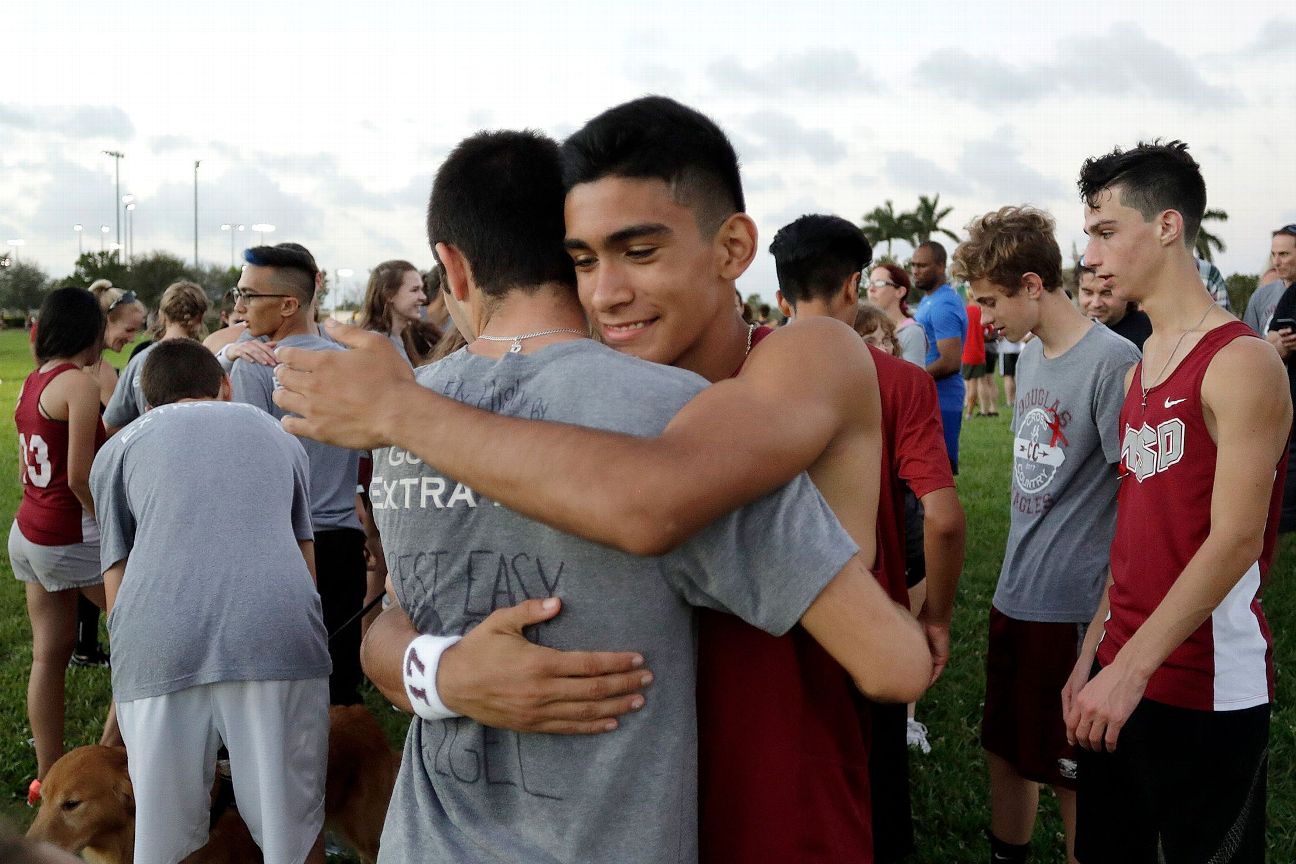