Krysten Anderson, 21, has rounded out her first year as a professional Monster Jam truck driver with Grave Digger as her chariot. Her story is one of legacy: Anderson's father, Dennis, is the creator and original driver of Grave Digger -- one of the most iconic monster trucks in the world. Her two brothers, Adam and Ryan, have been driving for nearly a decade as well. Adam drives another one of the Grave Diggers and Ryan drives Son-uva Digger.

"I realized that my life was different from other little girls around the fourth grade," she says. "The kids in my class took a field trip to my house because we had a huge monster truck shop and gift [store] attached to it. My dad built Grave Digger in the shop. My brother Adam had a ride where, for $5, you could get on the back of a monster truck."

As a teenager, she had dreamed of attending college, but the world of monster trucks caught her attention.

"I didn't want to look back, I didn't want it to be a big 'what if,'" she says. "College would always be there for me, but I wasn't sure how long a seat in a monster truck, especially Grave Digger, would be waiting for me."

"I was the slowest qualifier last year. I couldn't even make it down the track correctly," she says. "But this year, I was making fast times and every time I made a pass, I was shaving time off." 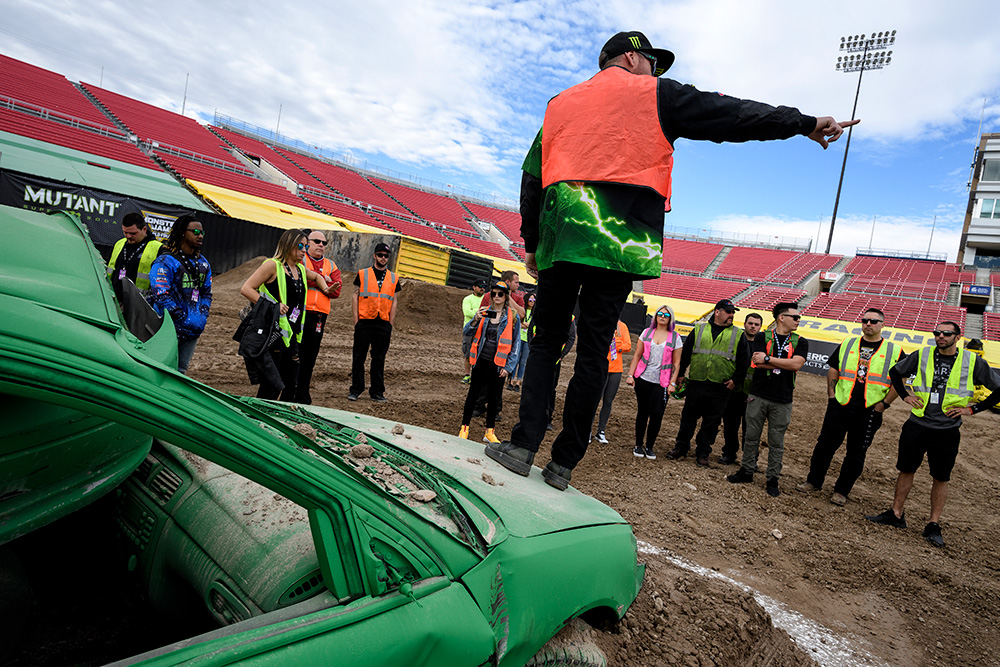 Todd LeDuc, who drives Mutant Super Soda for Monster Energy and is a veteran Monster Jam participant and world champion, takes some of the newer recruits through Thunder Alley. World Finals can be intimidating for younger drivers such as Anderson, who might have been driving in smaller courses. LeDuc goes through the motions of drifting around the crushed cars in the left lane. According to Monster Jam, more than 3,000 cars are crushed at Monster Jam events every year. 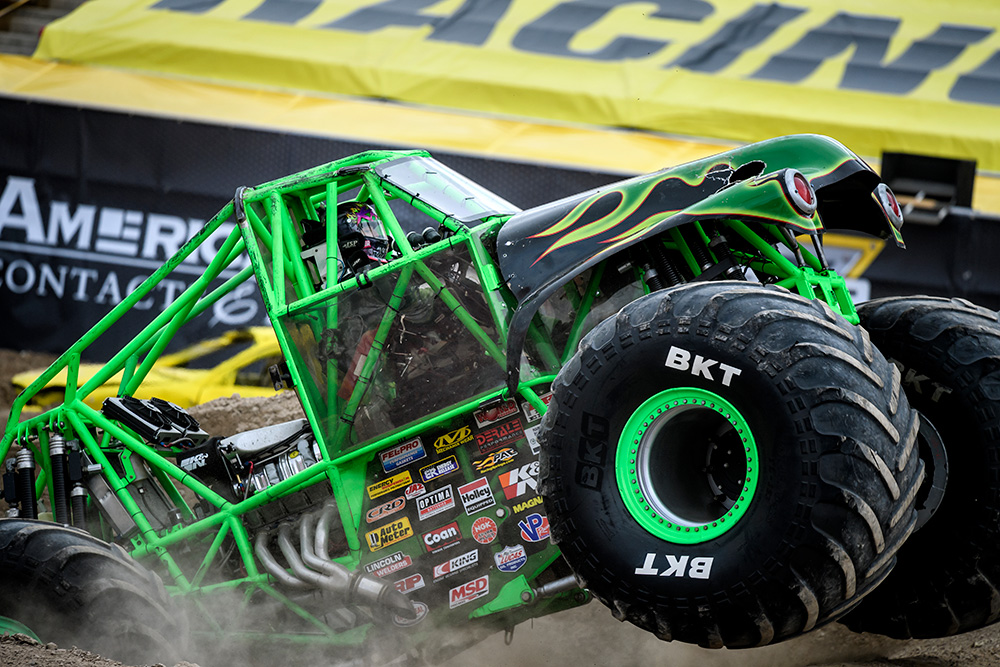 Anderson started training in 2016 and had her first live show a year later in Nashville, Tennessee. Initially, she wanted to work for Monster Jam designing the trucks instead of driving them. Monster Jam truck tires are designed differently to satisfy various track conditions and driver preference. Carving just one tire requires over 50 hours of labor, according to Monster Jam. 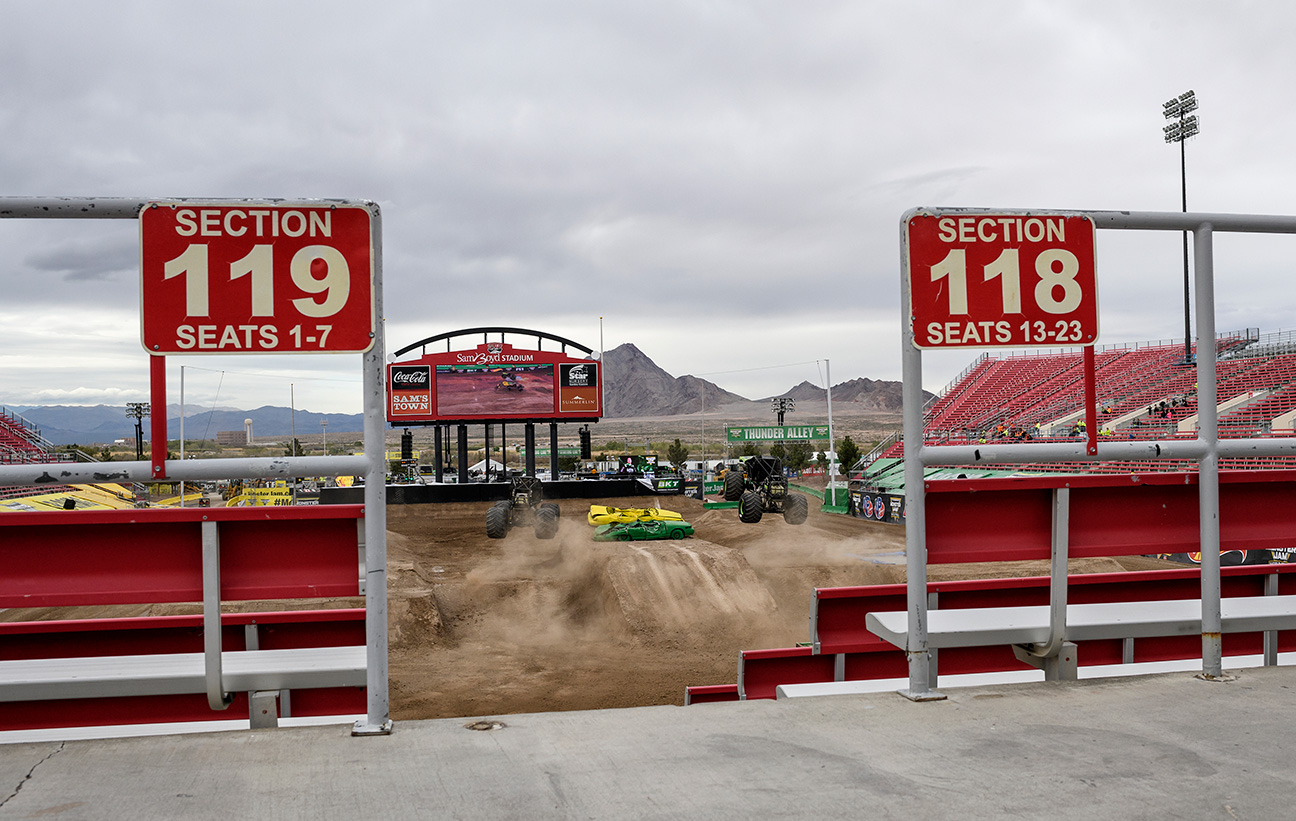 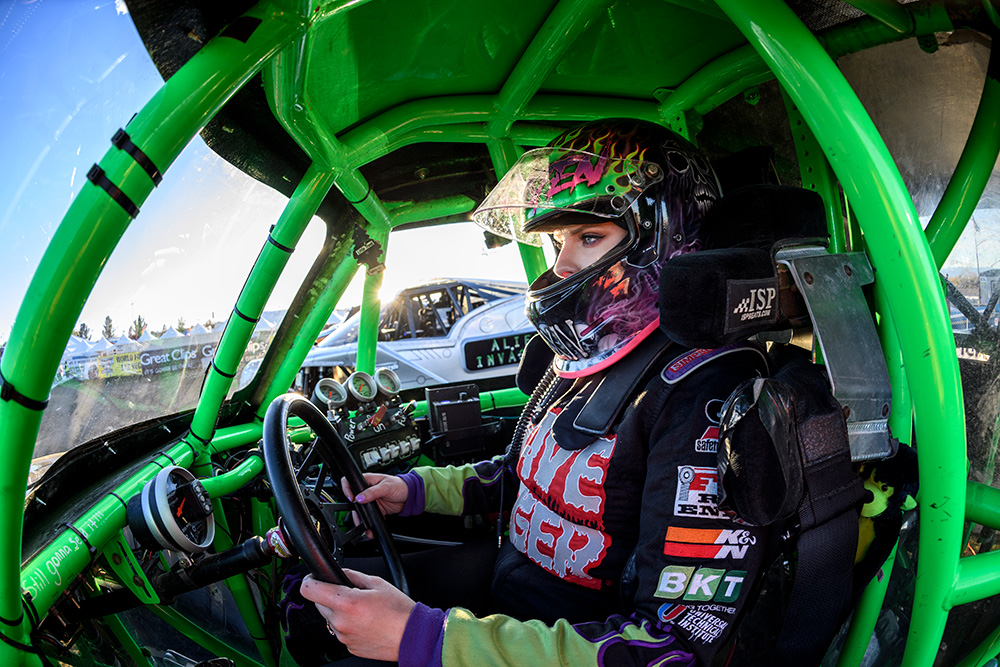 Most Monster Jam trucks have the driver seated in the center of the vehicle so they can best see the track and for weight distribution. "The only time I ever really get nervous in the truck is right before I'm about to go out," Anderson says. "I have those butterflies all the way up my throat and down to the tips of my toes. I'm not thinking about what could happen when I get out there because you never know what could go down while out on the track. I [worry] about doing badly -- that is my biggest fear every time in the truck. I could care less about anything else." 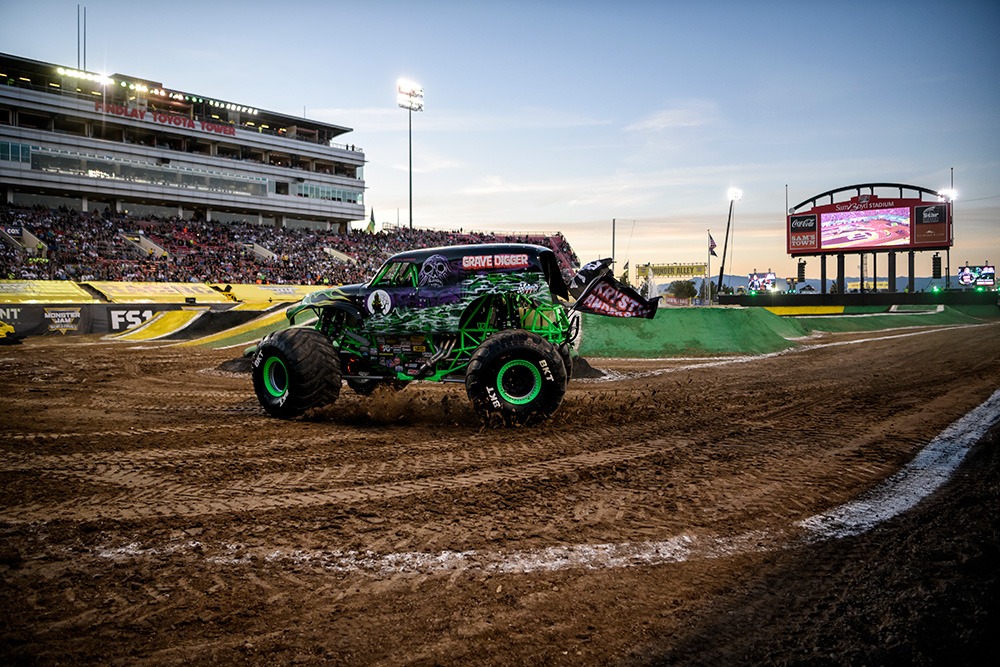 The male-dominated environment doesn't bother Anderson. "I don't really get a lot of backlash from anyone," she says. "I'm an Anderson -- everyone looks at me the same way they look at Adam, Ryan and my dad." 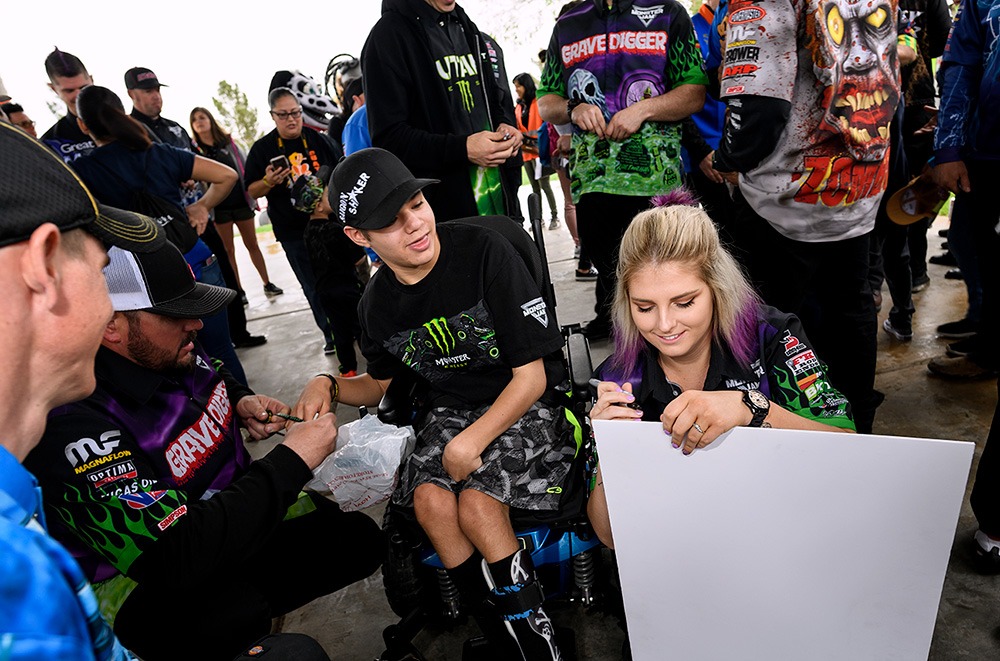 Monster Jam has been involved with the Make-A-Wish Foundation for years. Anderson has known Connor Anapol, pictured in wheelchair, for many years as he's a regular at the Monster Jam events. "I remember being a little girl playing in the pit party down in the dirt next to my dad's truck while he was sitting at the table signing autographs for hours," she says. "Now these people are bringing their kids. It's just so cool that I get to meet these second-generation fans." 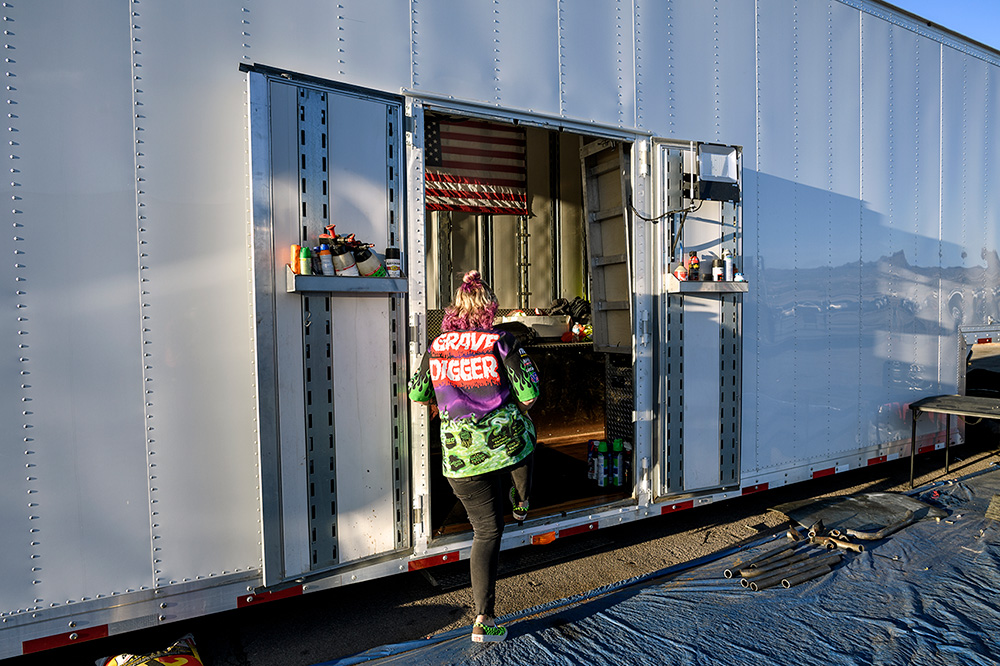 After the pit party, Anderson has to get suited up for the race. She heads back to her trailer, which hauls Grave Digger around all year, to put on her fire suit, a required part of Monster Jam athletes' outfits since the late '80s. Each driver has a custom-fitted, fire-resistant suit to match their truck, complete with helmet, gloves and shoes. And around their neck is a specially designed harness that provides stability during impact. 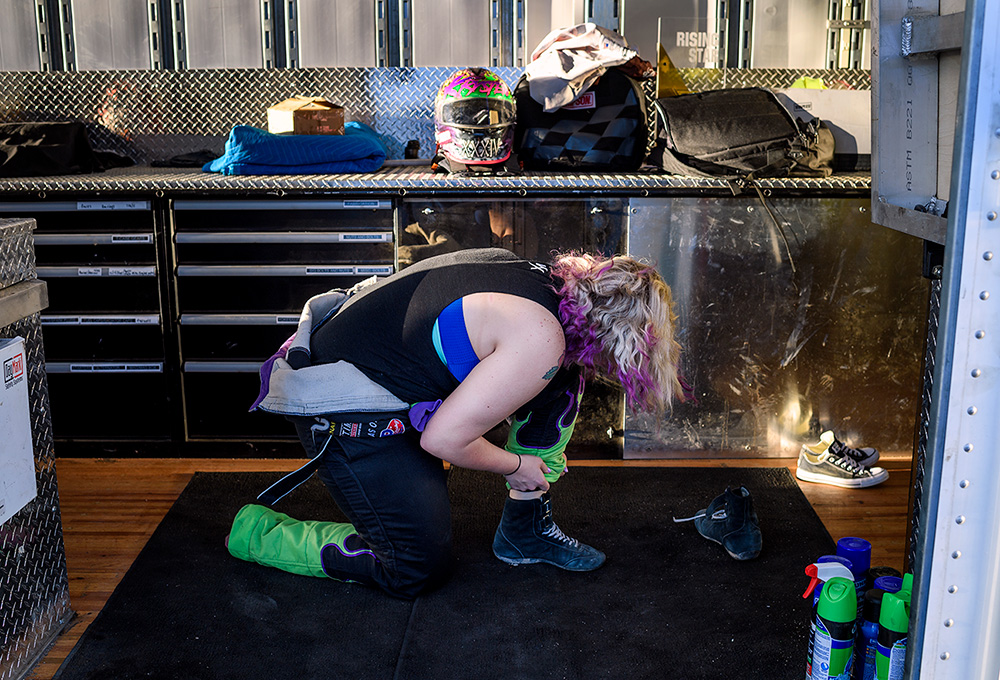 One of Anderson's pre-show rituals is taking some time to herself in her trailer. "I try to keep my mind clear," she says. "I don't try to overthink anything. If I sit and think too long, I get nervous and lose my composure, so I just casually put my gear on and let my instincts take over." 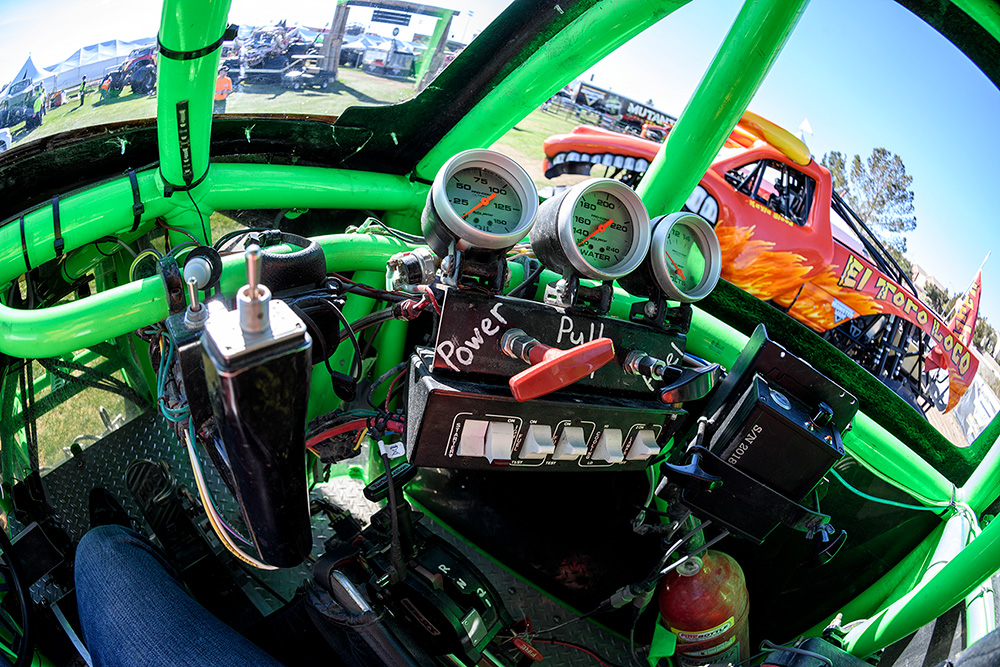 "The red knob is the power -- I pull that out to start the truck. After the truck is on I pull the black fuel knob to get fuel into the engine and start the truck," says Anderson. "Like in a regular car, the steering wheel controls the front tires, but Monster Truck drivers use the silver toggle on the left to control and turn the rear tires." 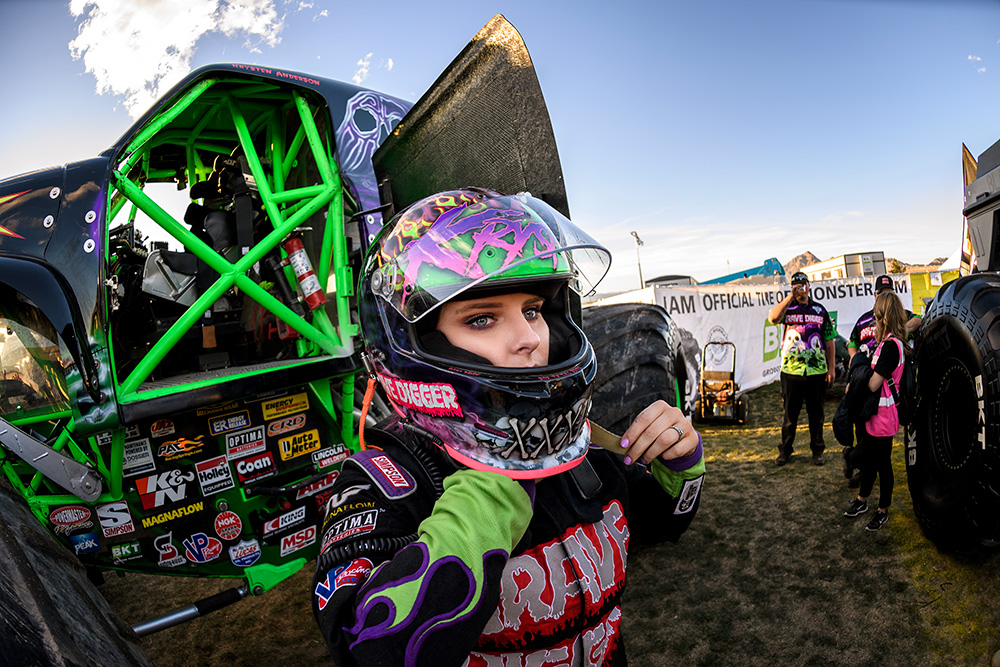 Growing up, Anderson had her dad and brothers to look up to as successful entrepreneurs and monster truck drivers. But there were also women who influenced her: Madusa (Debrah Ann Miceli), whom her dad trained when Miceli switched from the world of wrestling, and Dawn Creten, who still drives the Scarlet Bandit. Creten was Anderson's favorite, though she was partial to her dad. "I just really liked her truck," she says. "If Dawn and my dad were racing, I had to say, 'Sorry, Dawn! This is Dad and Dad's got to win.'" 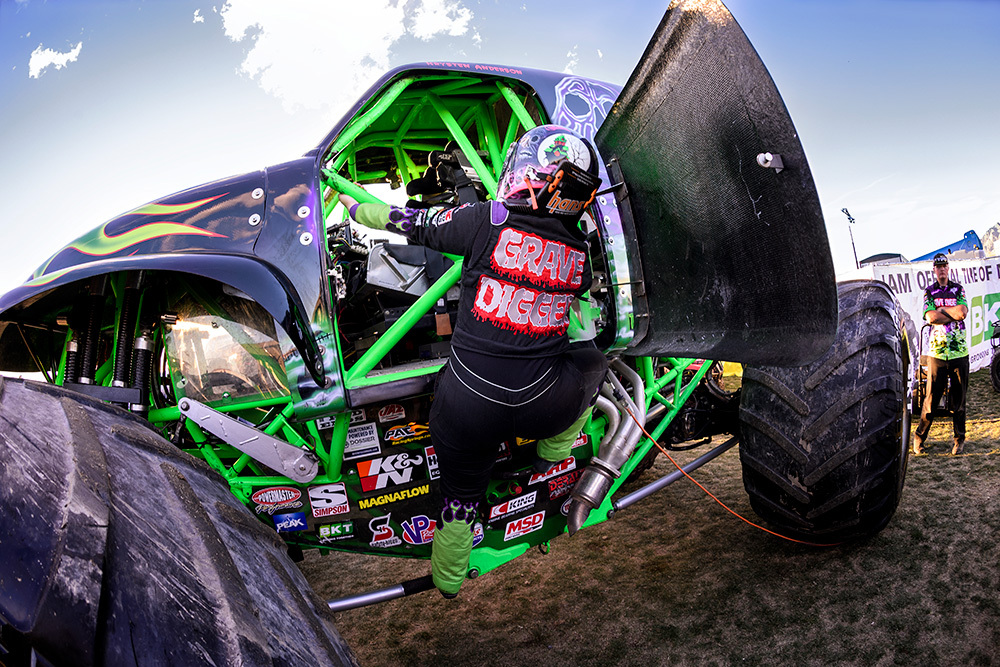 At Anderson's first World Finals in 2017, she was nervous. Her family had a lot of history on that track; she'd seen her dad and brothers competing in that field for nearly two decades. She recalls thinking at the time, "You know what -- I'm the first Grave Digger to ever be in the Double Down Showdown Field, I'm the first girl to ever drive Grave Digger, my last name is Anderson and I'm in front of the biggest crowd I'll be in front of all year." 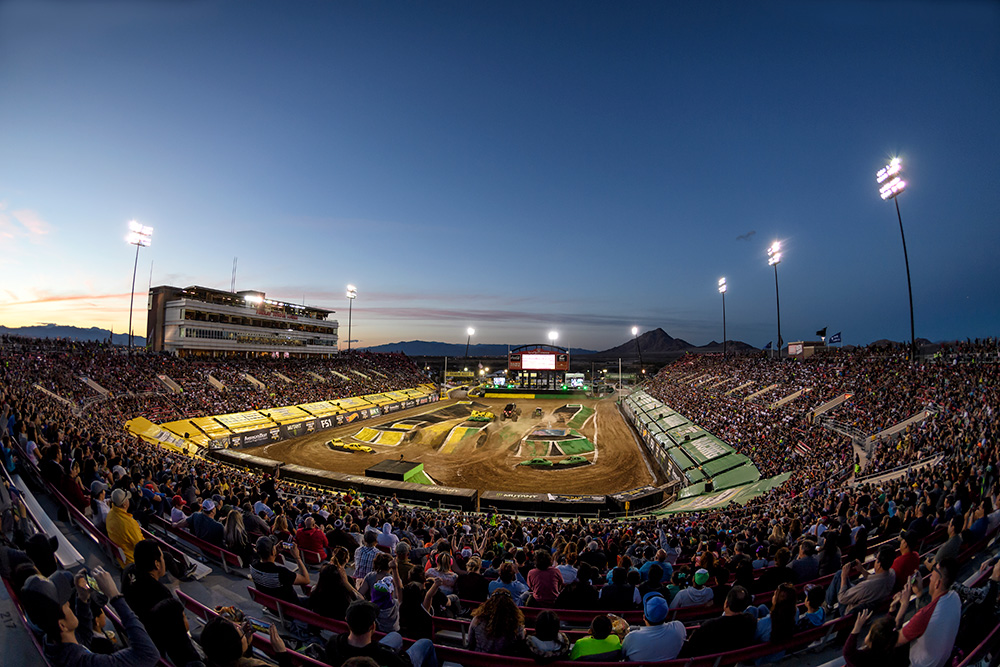 "When I pull out on the tracks," she says, "I have no idea what's going to happen. I could make the first hit and I could roll over and it could all be over right there. Or, I could put on the show of a lifetime. It could be the best freestyle I've ever done, it could be the best race I've ever had, and that's what makes it so exciting for the fans and for the crowds." 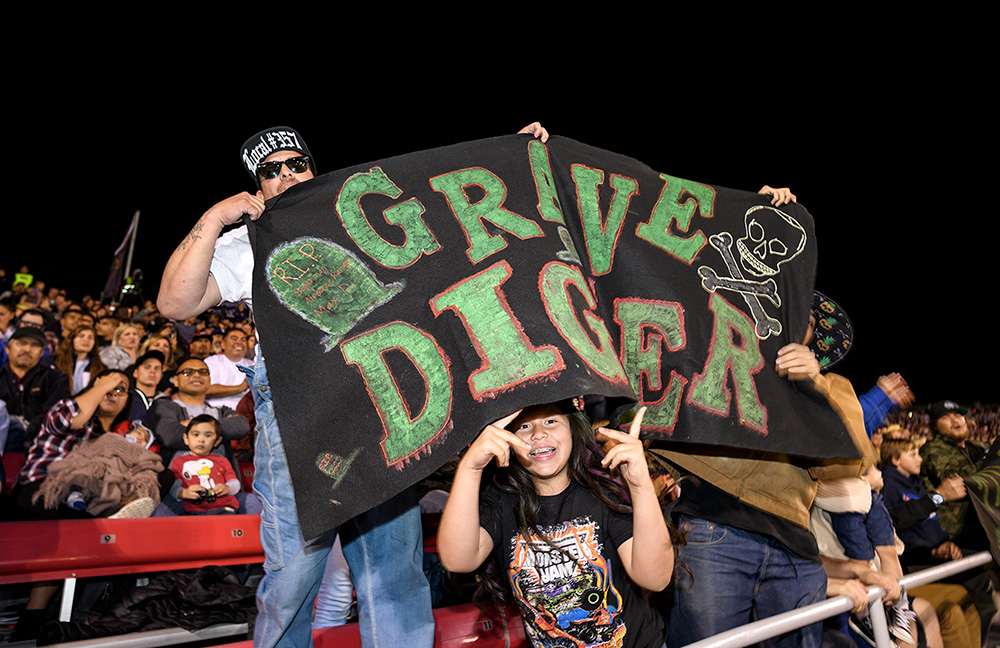 "Seeing all those people decked out in head-to-toe Grave Digger gear, chanting, 'Digger! Digger! Digger!' It is so insane," says Anderson. "I think that really helped me get past my rookie nerves and build my confidence." 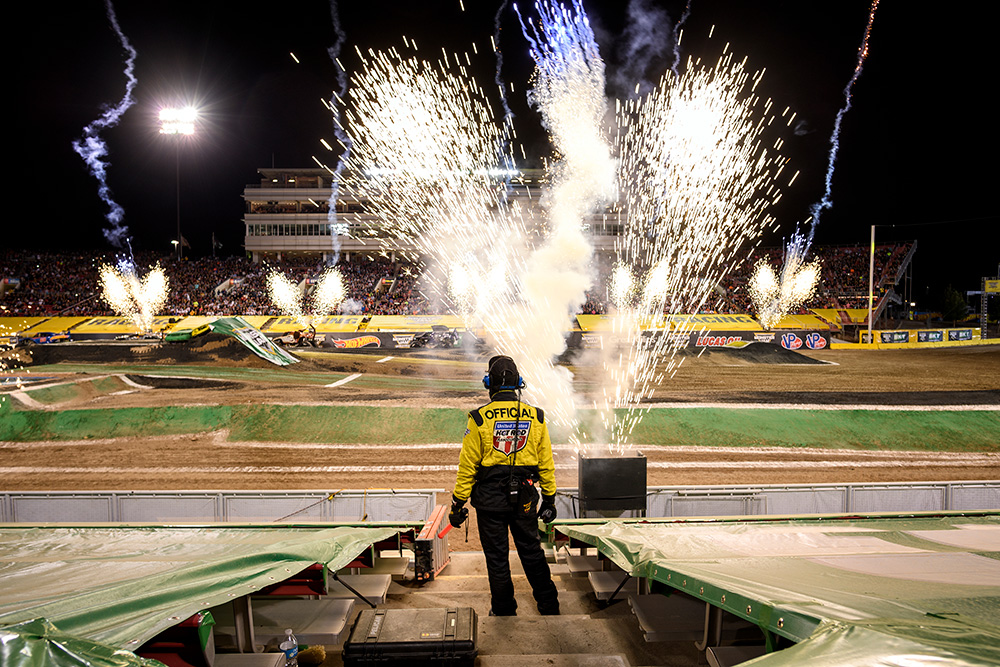 Monster Jam tech officials act as the drivers' eyes in the back of their head. They're the ones who are also holding the RII, a remote ignition interrupter, which means they are able to shut the truck off if they see that it's in a bad situation. Ultimately, the drivers want the competition to be just as enjoyable for them as it is for the spectators. It is a big production, but none of it is staged. "When we pull up on the line," Anderson says, "we have no idea what's going to happen."

On her first race of the night, Anderson was up against Tony Ochs in Black Ops. He'd gotten the faster qualifying time, which put her in the less favorable lane. The first two trucks had already rolled, so Anderson was focused on just not rolling at that point, which stops the time and disqualifies the driver. "The most successful people at World Finals just run their own race and pay attention to what's in front of them," she says. "I was paying attention more to where Tony was and not where I was, and I hit a crushed car and spun out. He ended up taking the win from me." 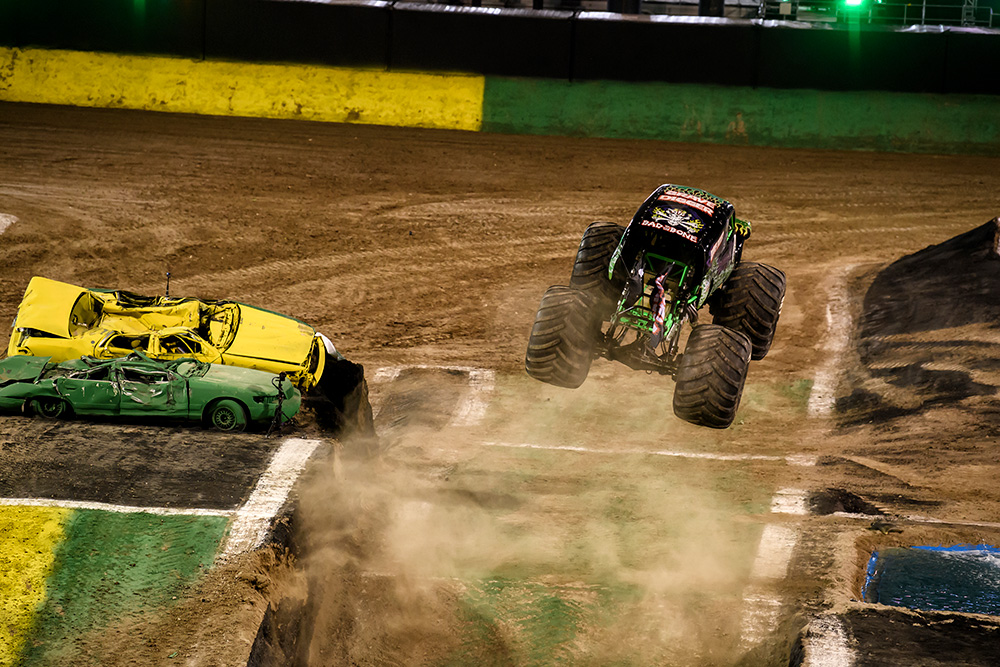 Starting out as a Triple Threat Series athlete, Anderson had to attend 100 hours of Monster Jam University before competing in any events. Safety is a big priority and Anderson says she never feels at risk when on the track. Building a truck takes nine months. When complete, the truck weighs 12,000 pounds. They have roll cages and custom-built seats molded to the drivers' bodies, as well as a five-point harness system keeping them strapped in tight. 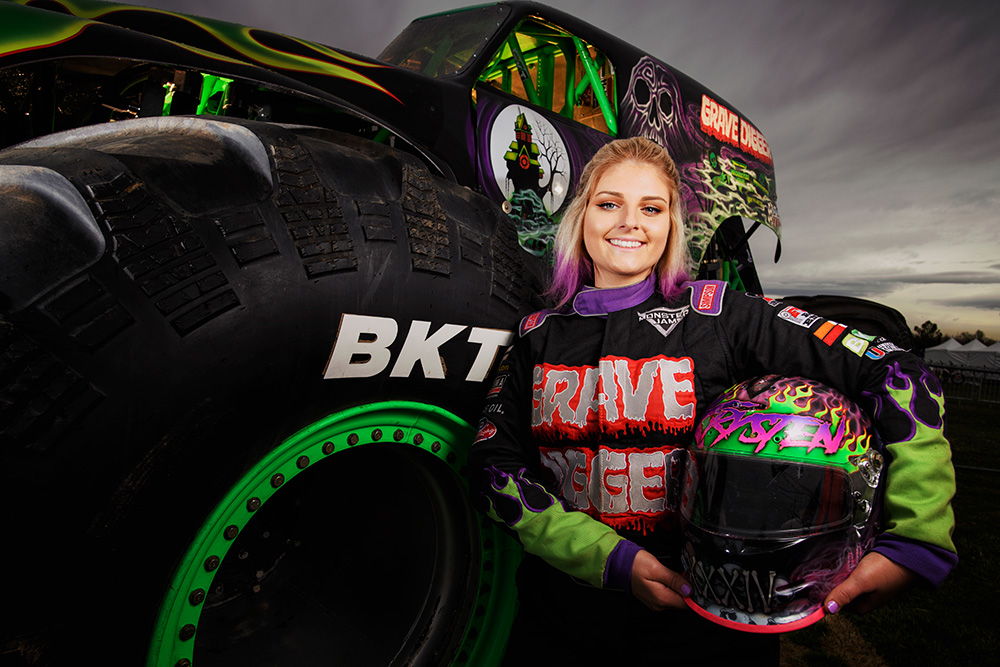 "When I think about where Grave Digger started in this tiny North Carolina town, literally up the road from my house, I can't believe it. If you had asked me when I was 18 years old if this is where I'd be by 21 -- verified on Instagram, pushing 40,000 followers, racing a truck overseas and all over this country. My friends from high school would say they always knew I was going to drive, but it's just crazy to me to be here, doing it." 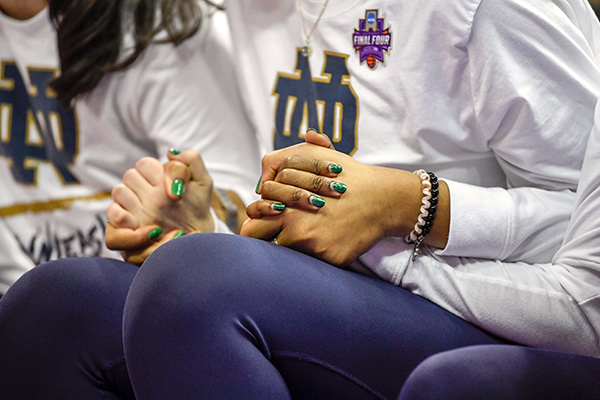 Family of the Women's Final Four 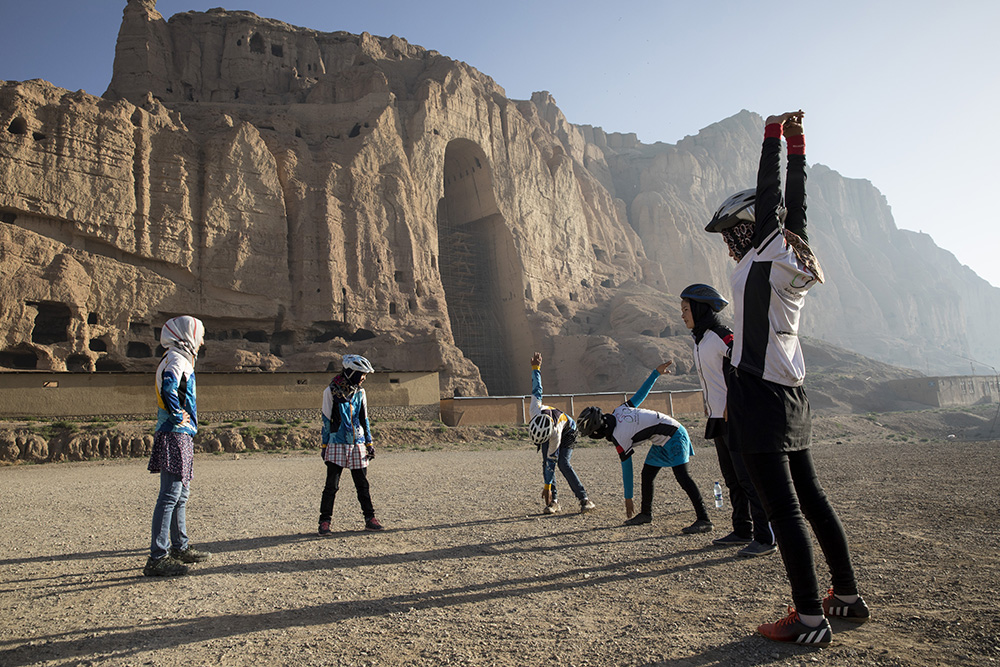 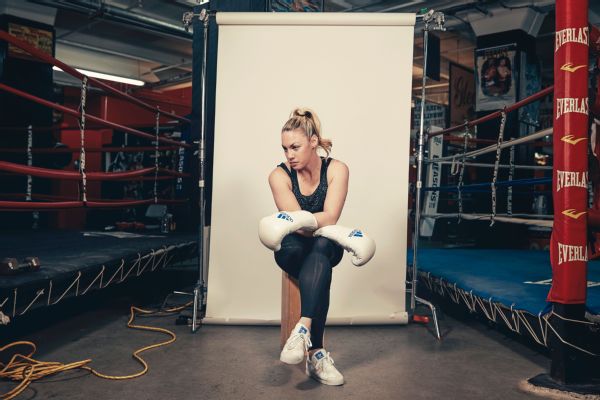 Heather Hardy in her own words 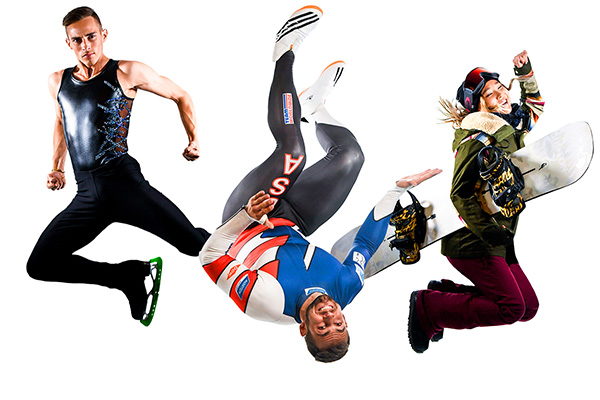