akatriona Brunson is a bit of a local celebrity in Miami for her role as Bernice on the TruTV series "South Beach Tow." But there's another reason for her Florida fame.

Earlier this year, Brunson became the first female high school head football coach in the state when she was named to the role at Miami Jackson.

While her hiring was met with a mixture of fanfare and resistance, her players were quick to buy in to "Coach B" and her style, using the naysayers as motivation.

"The first play of the game, [the other team will] line up and say [Brunson] doesn't know what she's doing," offensive lineman Donte Morris said. "The first time I heard that it added fuel to my fire. You trash talk her, I'm gonna bust you in the mouth, and me and my female football coach are gonna beat you all."

Despite the unwavering loyalty from her players, they haven't exactly had a dream season. After only a few games, half of Brunson's coaching staff -- including assistant head coach Luther Campbell of 2 Live Crew fame -- quit unexpectedly. The team was left with a skeleton coaching staff for the remainder of the season and finished 3-7.

"A lot of people don't think a woman can coach this sport," Brunson said. "My first year has been tough, I can tell you that. It ain't no Cinderella story."

Despite the ups and downs, Brunson -- who spent eight years playing professionally in the Independent Women's Football League -- has tried to be a positive figure for her players both on and off the field. From encouraging them to do well in school as a means to better lives, to teaching them to respect women, Brunson knows she's in a unique and important position.

"I just don't want to let people down." 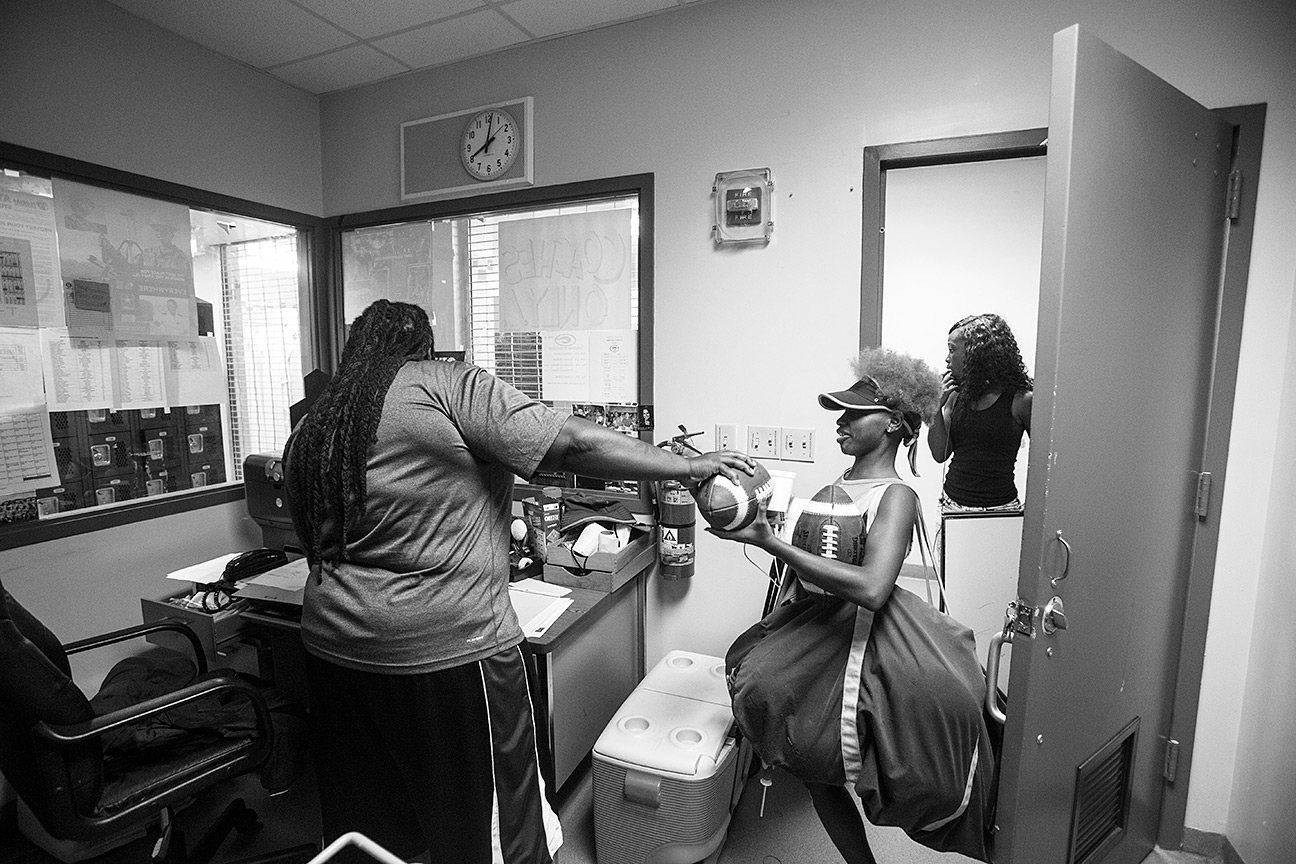 Though she coaches the all-male football team, coach Lakatriona Bronson's office is in the girls' locker room. Thankfully, that means team managers Lakima James and Jada Graham are able to help carry equipment to the field. 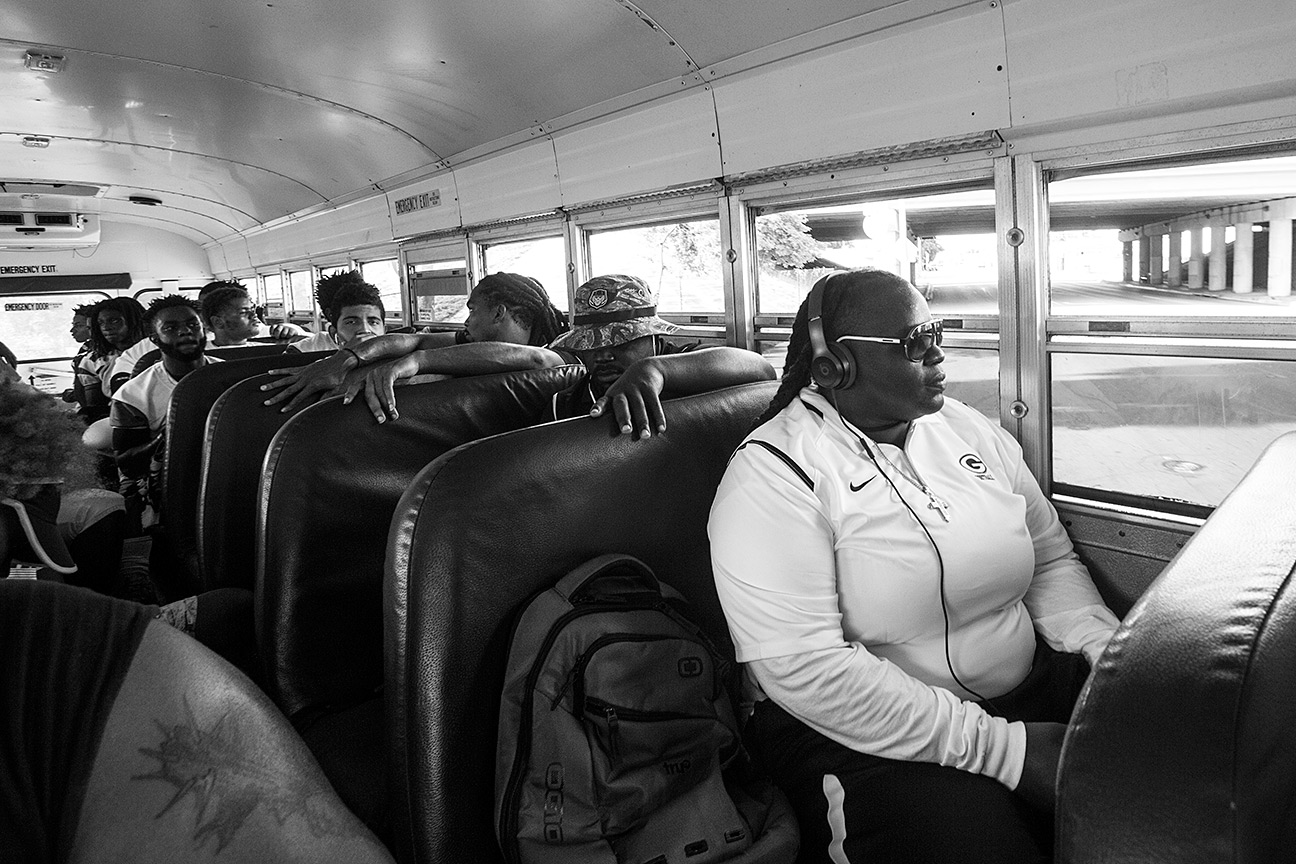 Before becoming head coach at Miami Jackson, the only organized football coaching experience that Brunson -- or Coach B as her players call her -- had was in girls' flag football at the middle and high school levels. When she was hired into her current role, she was just as shocked as anyone. "It's a man's sport, you know," she says. "There's a lot of guys that probably were qualified who could have had the job with more coaching experience." 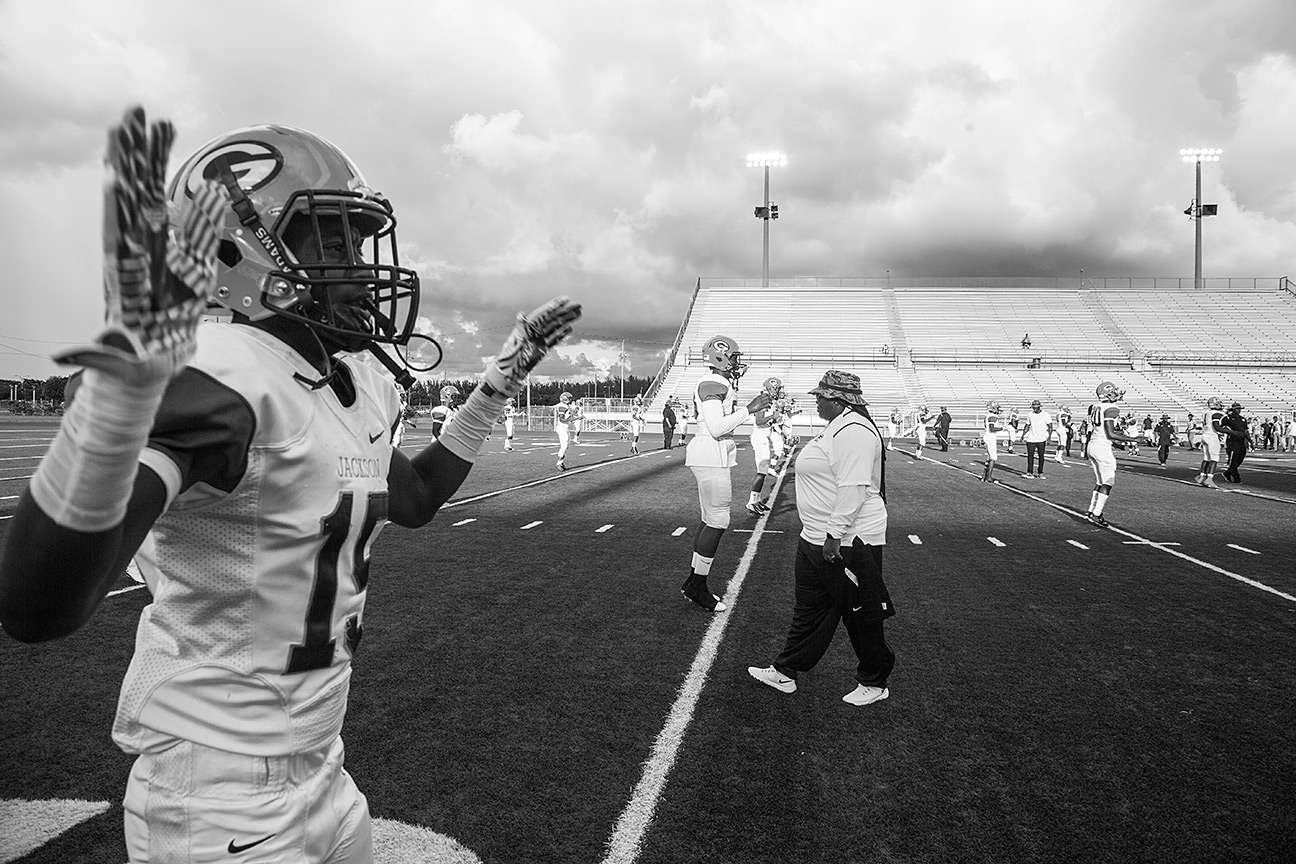 Cornerback Anthony Lloyd warms up with the rest of his team before their second game of the season, against Booker T. Washington. 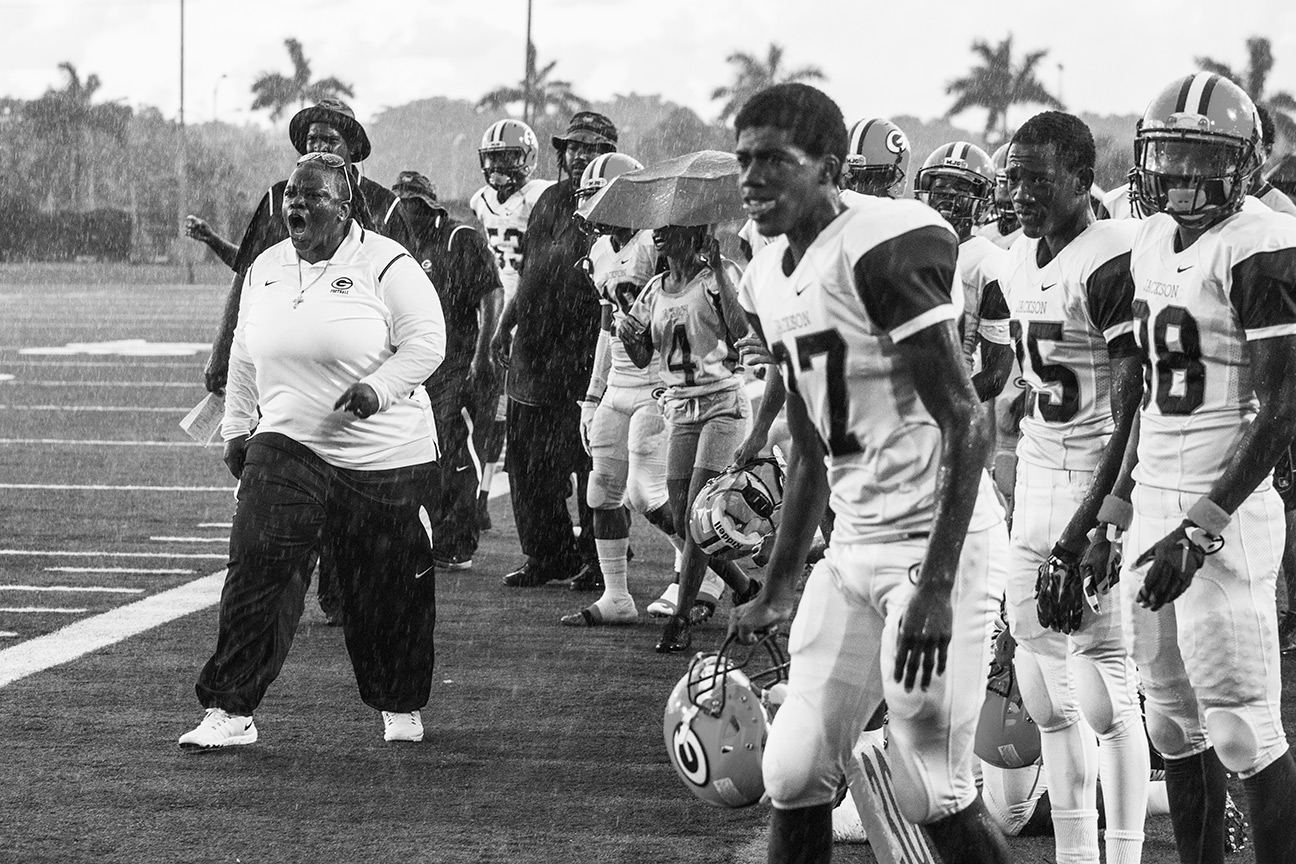 It rained steadily for most of the game against Booker T. Washington, but it didn't stop Coach B's intensity. She yells from the sidelines as her team marches down the field. Miami Jackson ultimately prevailed 12-9 and secured Brunson's and the team's first victory of the season. 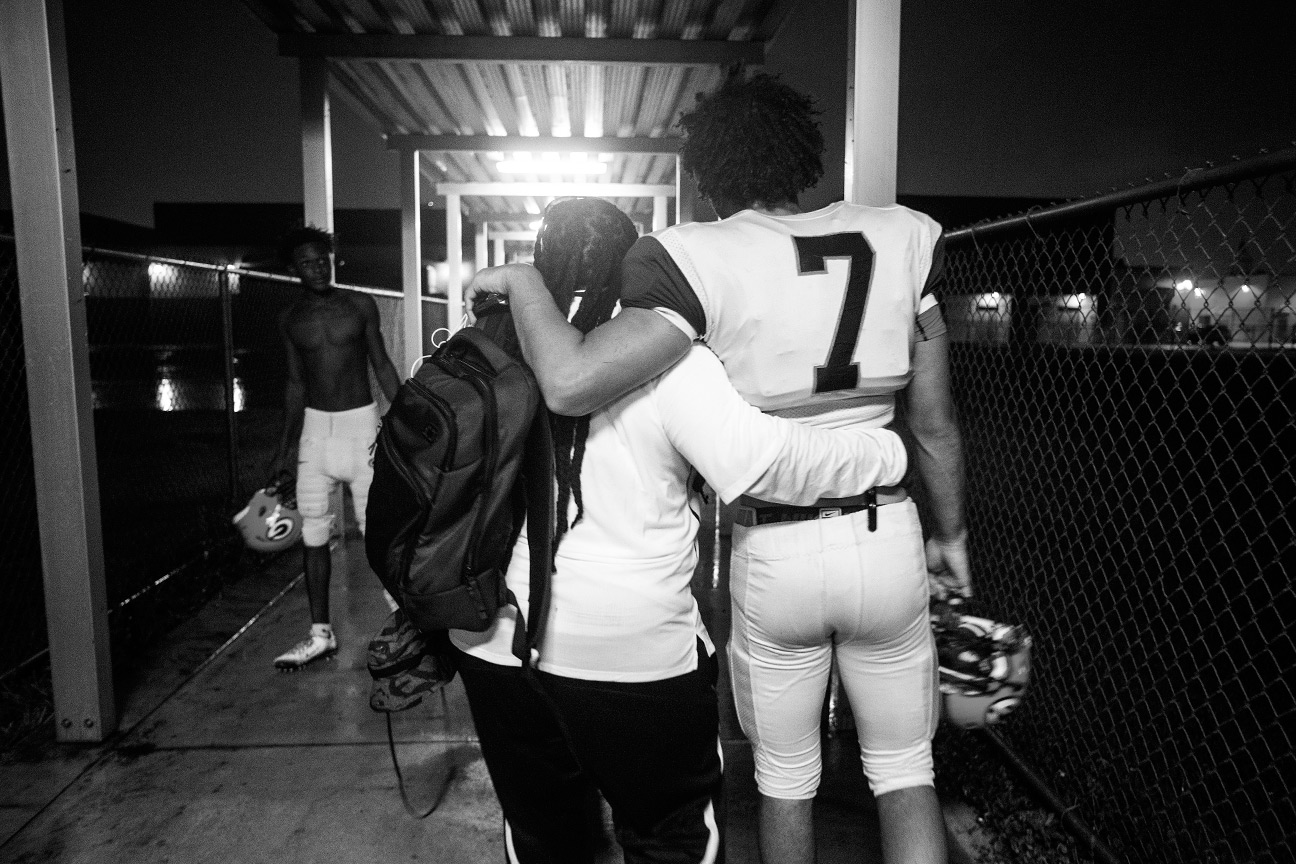 Coach B and defensive end Eric Mateo walk off the bus after arriving back to Miami Jackson from their win at Booker T. Washington. "She wants to win as bad as we do. We respect her the same way we respect our mother," Mateo says of Coach B, who doesn't have any children of her own. 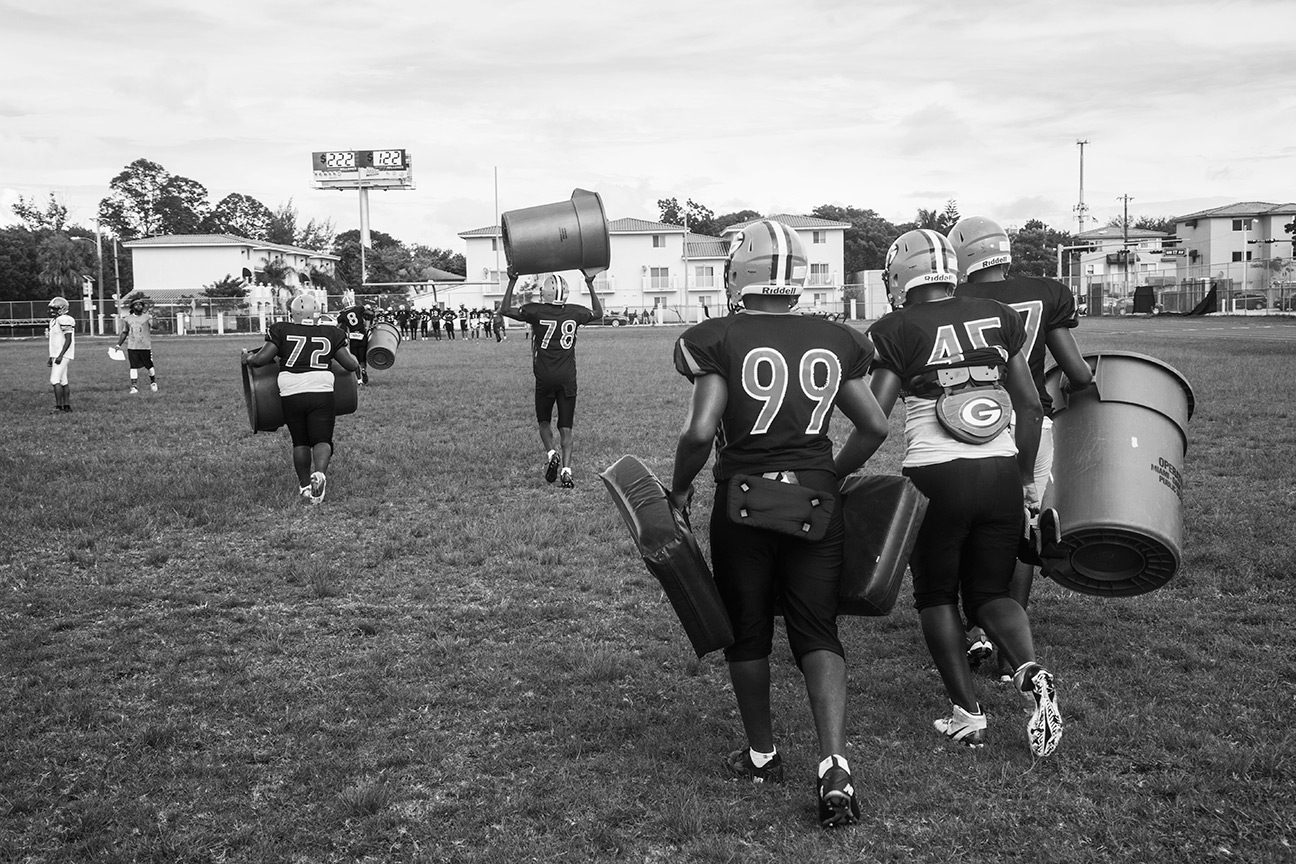 Coach B's players have overwhelmingly enjoyed their time playing for her. "She keeps me up and tells me when I'm doing wrong," quarterback Terrence Craig Jr. says. "When I do good, she tells me I'm doing good. That's what I like about her. She really has faith in you." 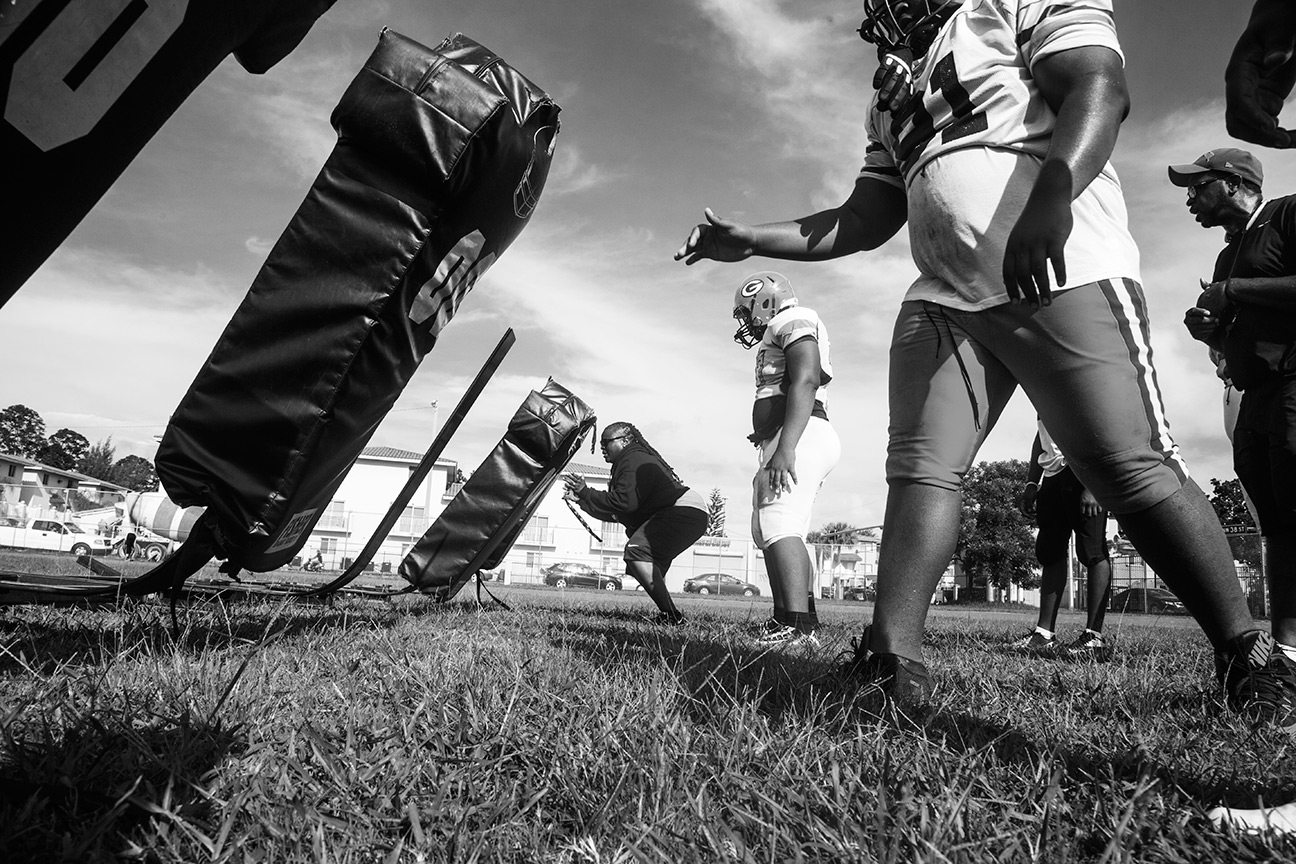 Coach B demonstrates the proper technique in hitting the football sled to guard Jacob Cato -- something he appreciates. "She shows a lot of leadership with us," he said. "She makes sure we do what we're supposed to do in the classroom and on the field." Coach B played professionally for eight years for the Miami Fury in the Independent Women's Football League. She was a three-time all-star, playing defensive tackle, left tackle, fullback, linebacker, "wherever they needed me," she says. 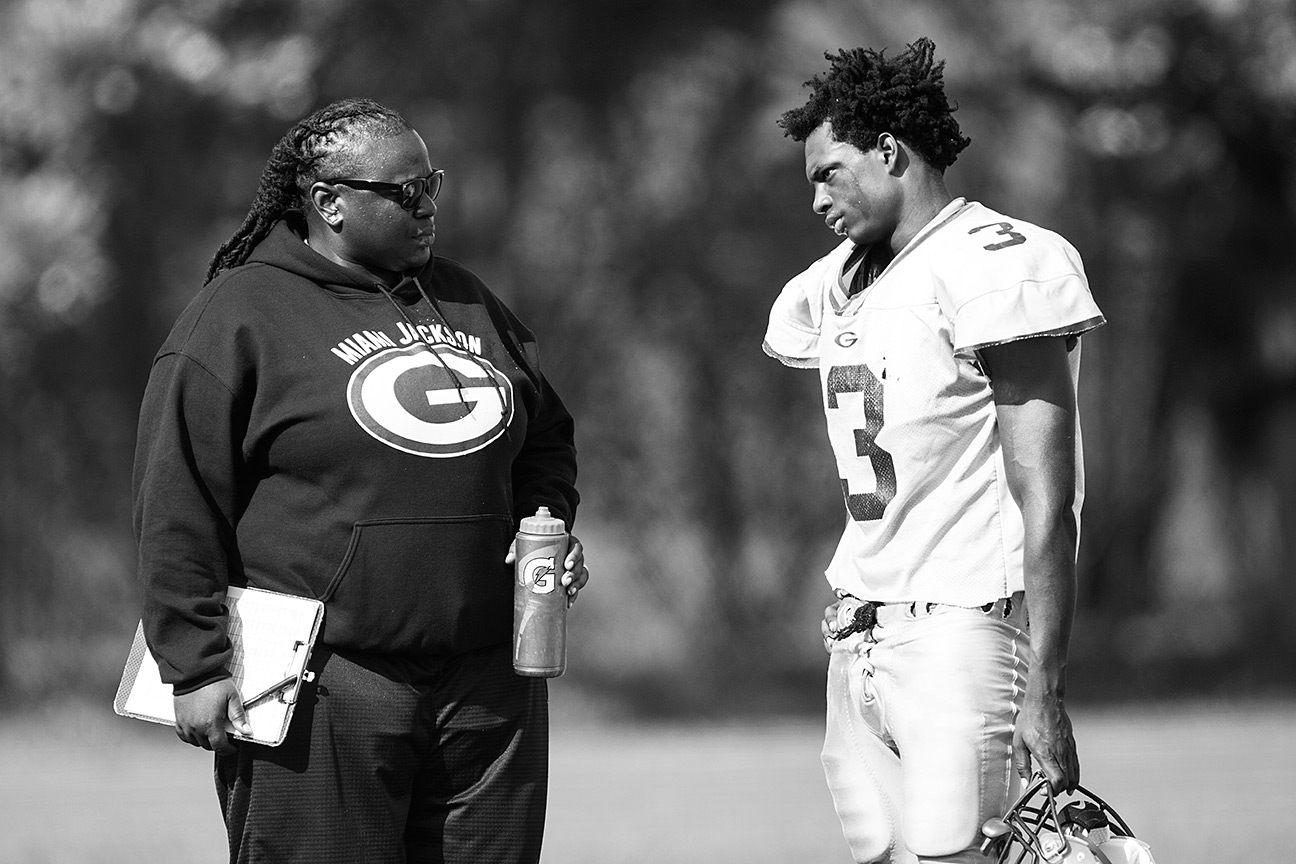 Besides football, Coach B stresses the importance of education to her players. "This football thing, to some of them, it's life or death," she said. "That's why you have to put something else on their table like knowing that if I get an education and I go and play football now I'm getting a two for one. I'm getting an education, and I'm doing something I love." 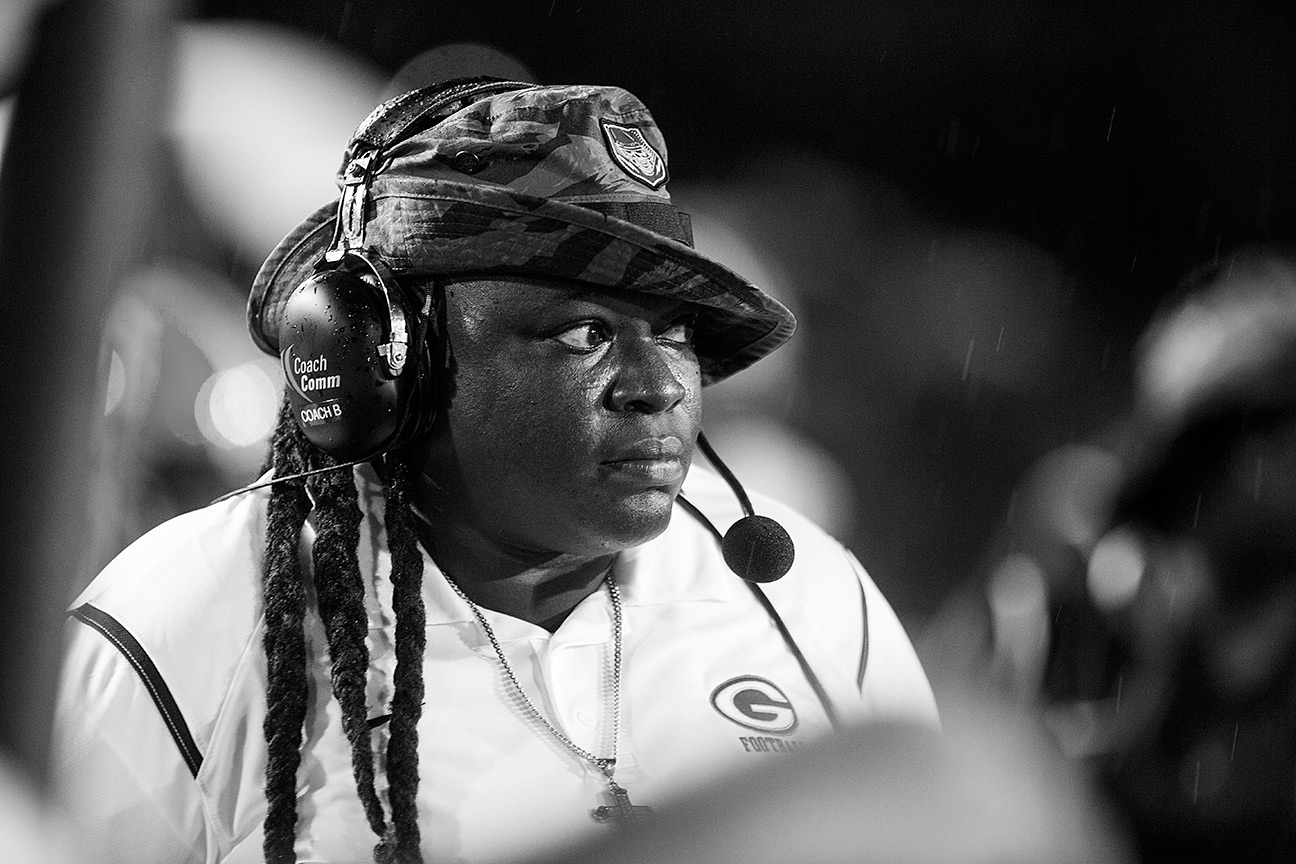 In a rare moment without her signature sunglasses, Coach B can't hide her displeasure with her team during its game against Cardinal Gibbons High School. 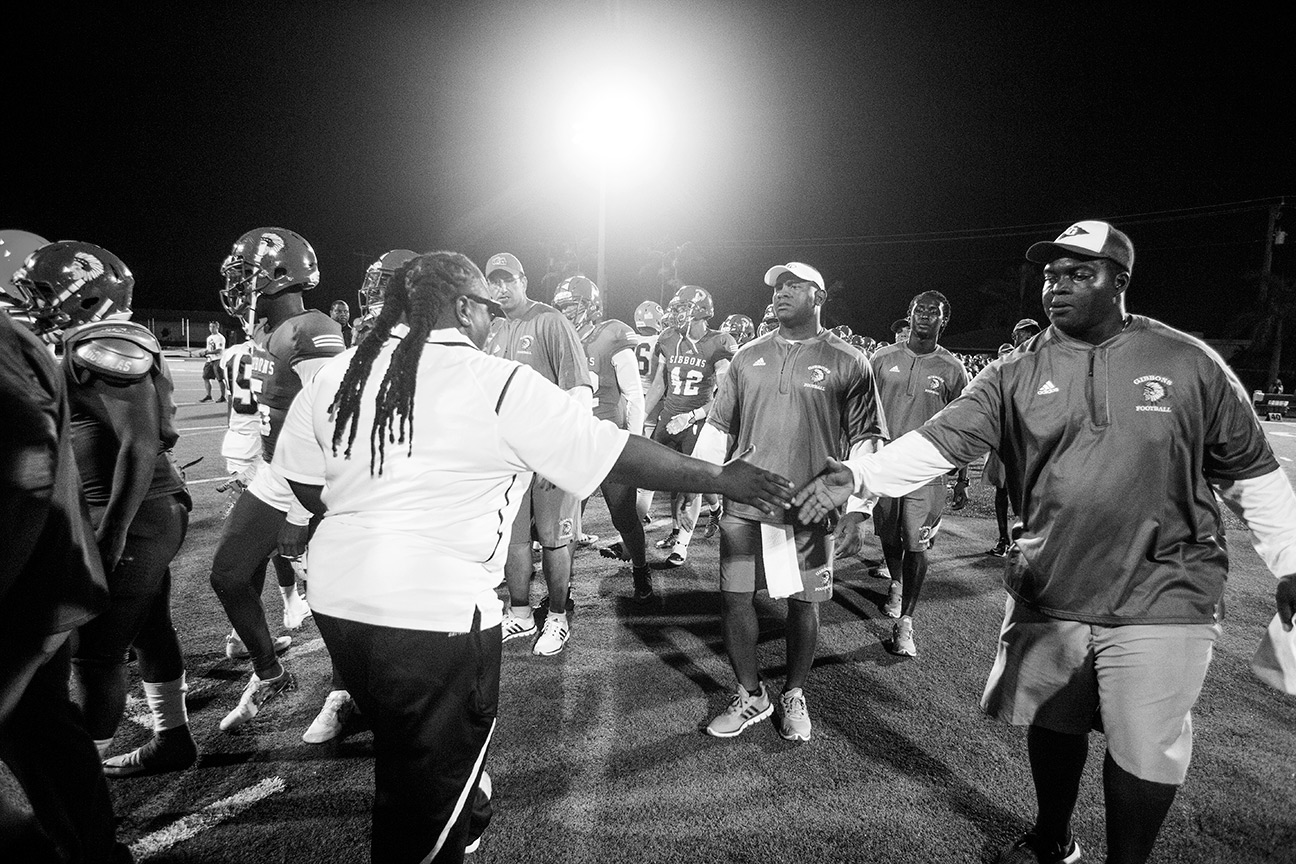 Coach B shakes hands and congratulates the coaches at Cardinal Gibbons after her team's 36-7 loss. While she at first faced doubt from other players, parents and even referees, she says her local community has since been supportive. "All the local guys, I know these guys before football, I know them outside of football, they call me and ask, 'Anything you need coach?' Those are the people I play, so to see them welcome me in, it's been great." 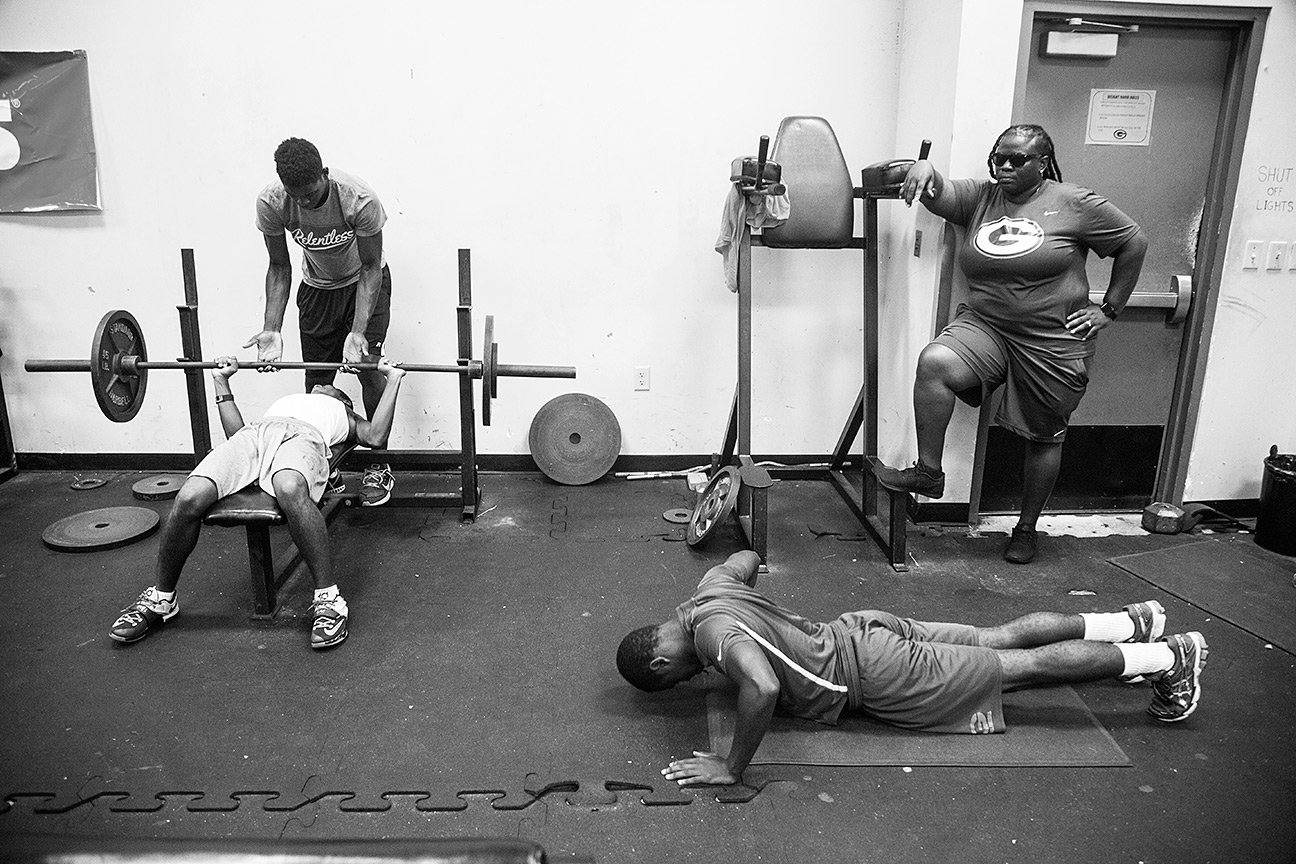 Coach B watches members of her team work out in the weight room. "If you're building a program, there's not one single day you can slack up on them," she said. "Making sure they're doing other things and not getting in trouble, coming to school on time, and keeping their grades up, that's year round." 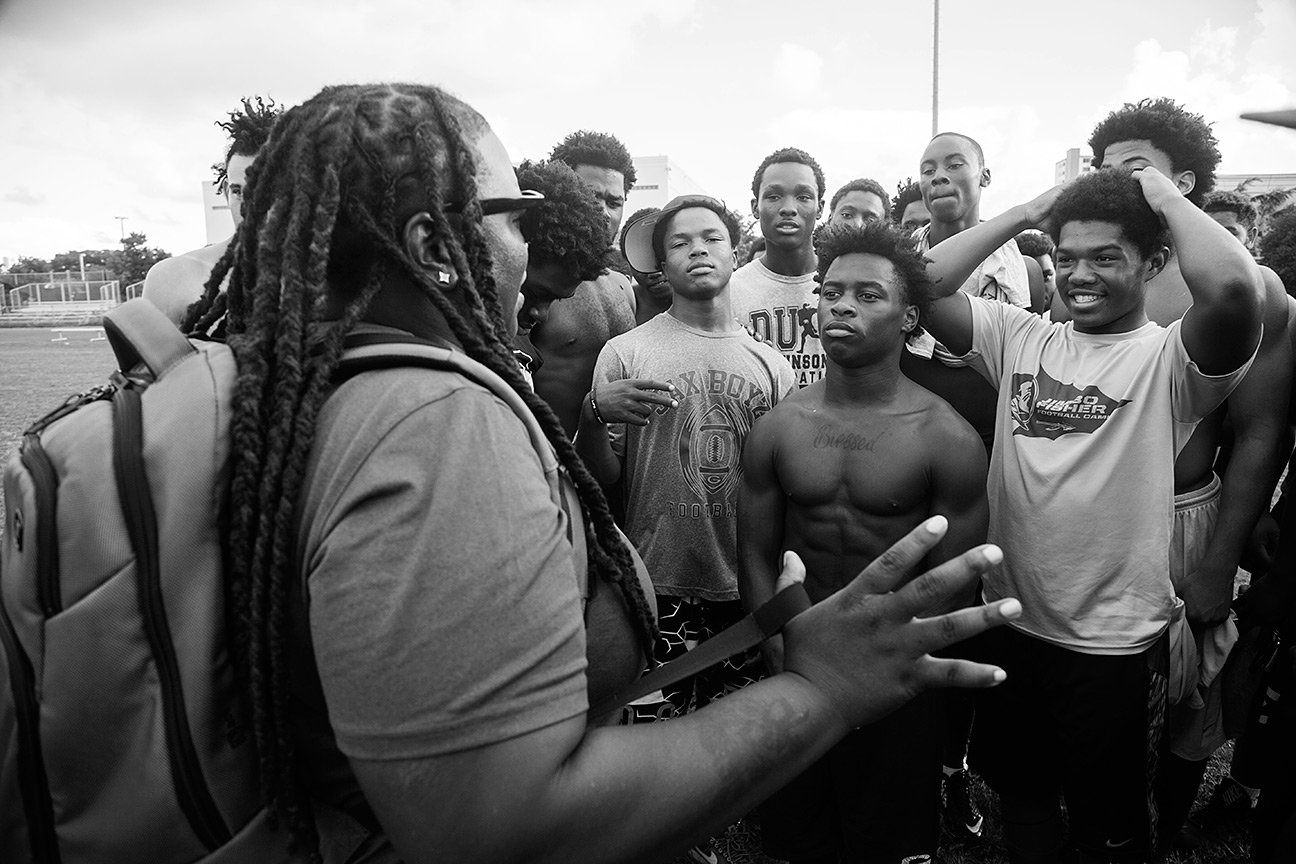 Coach B talks to her team after what she calls a "Black Monday" practice -- because the players "practice and run until they black out." She is dedicated to helping as many of her players as possible to use football as a means to getting an education, a college scholarship and breaking out of the cycle of violence in Miami. "There's so much killing going on, I've had two kids this year that have been shot," she says. "My whole thing about this sport is you can teach a kid how to play football any day." Getting them to the next level is in that classroom. It ain't got nothing to do with what's on the field." 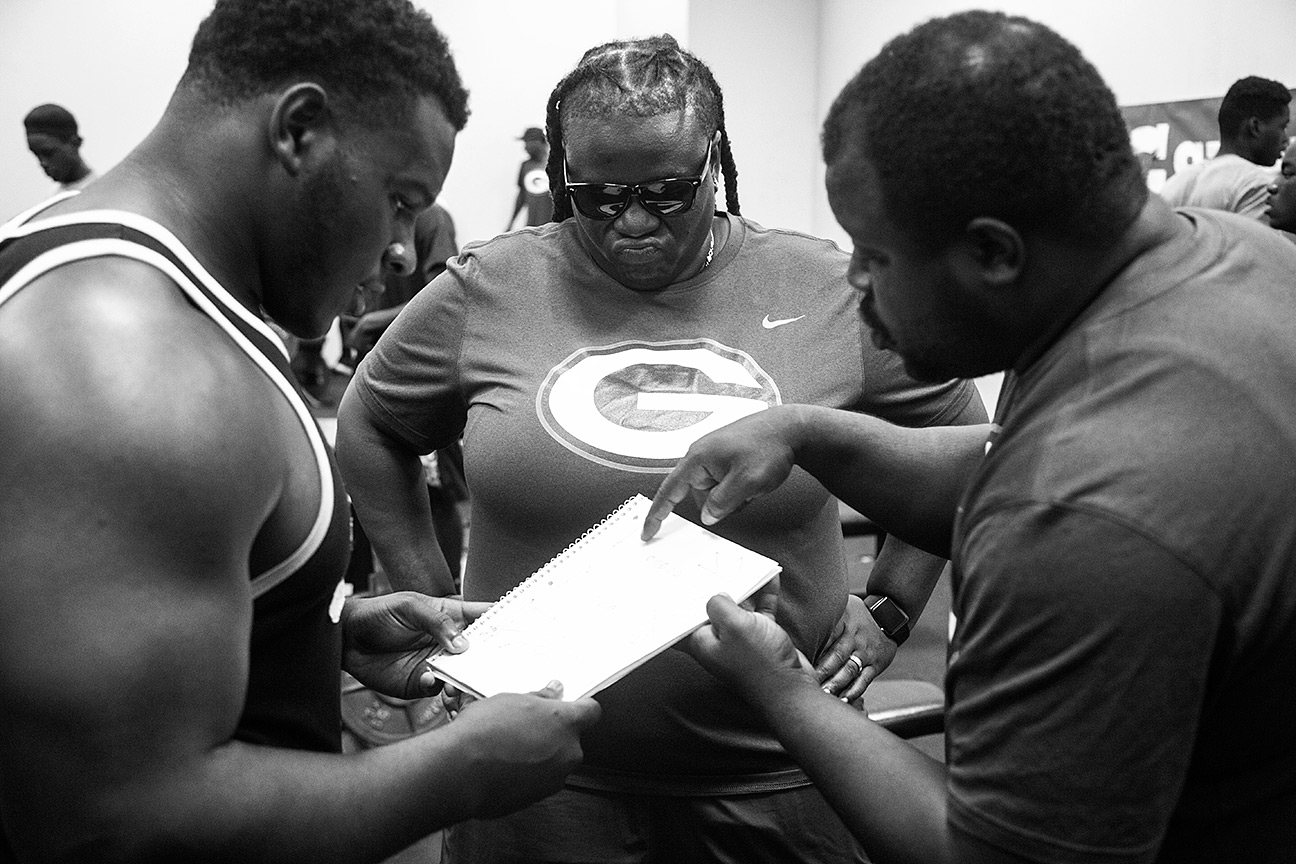 Coach B goes over a play with defensive tackle Renaldo Flowers Jr. and quarterbacks coach Tywane Stevens. Despite being indoors, she still wears her trademark sunglasses. "Behind my shades I can be me," she said. "My facial expressions sometimes give me away. I don't like nobody to see what I'm looking at. I'll be looking at everything, I'm very observant. I keep my shades on and I see everything." 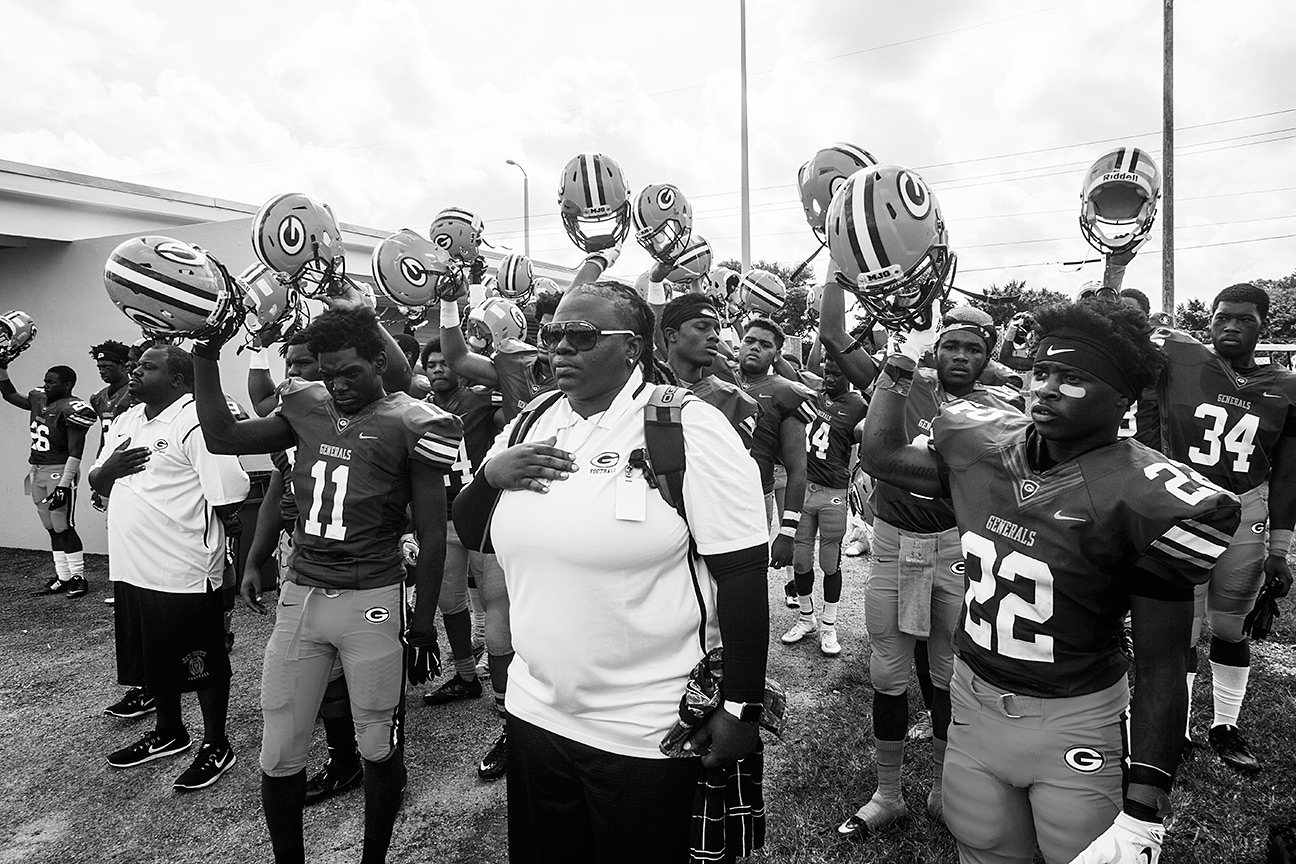 The Generals, with a record of 1-4, hoist their helmets in the air at the end of the national anthem before a game against rival Miami Central, their sixth of the season. 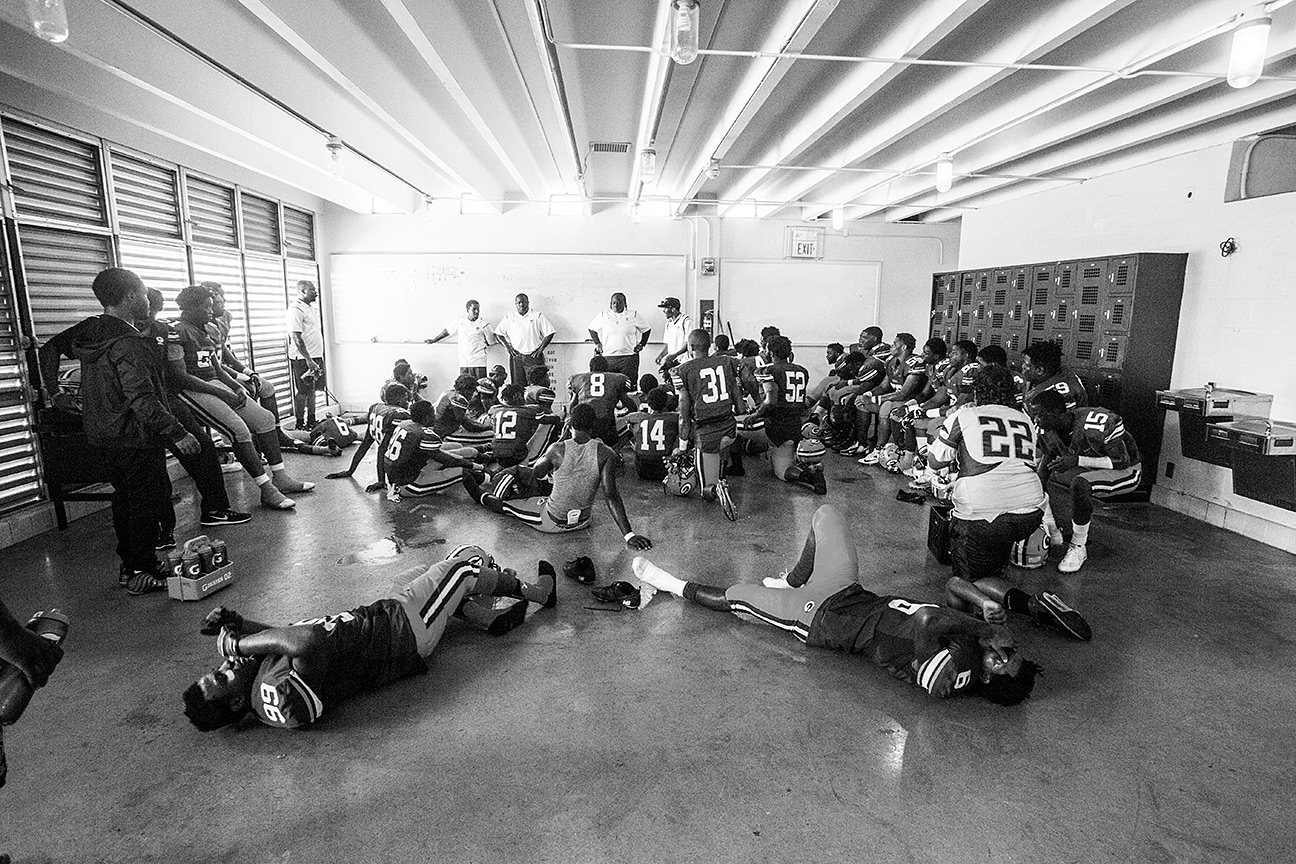 Coach B tries to encourage her exhausted team at halftime of the Miami Central game. While the Generals would go on to lose 48-6, Coach B would not let the outcome bring her down. "The losses that we've had, it's hard for anyone to take those," linebacker coach Quan Chess said. "If she can roll with the punches as a woman, and I'm not saying that to demean her as a woman, but I think I can swallow my pride and roll with the punches too and follow her lead." 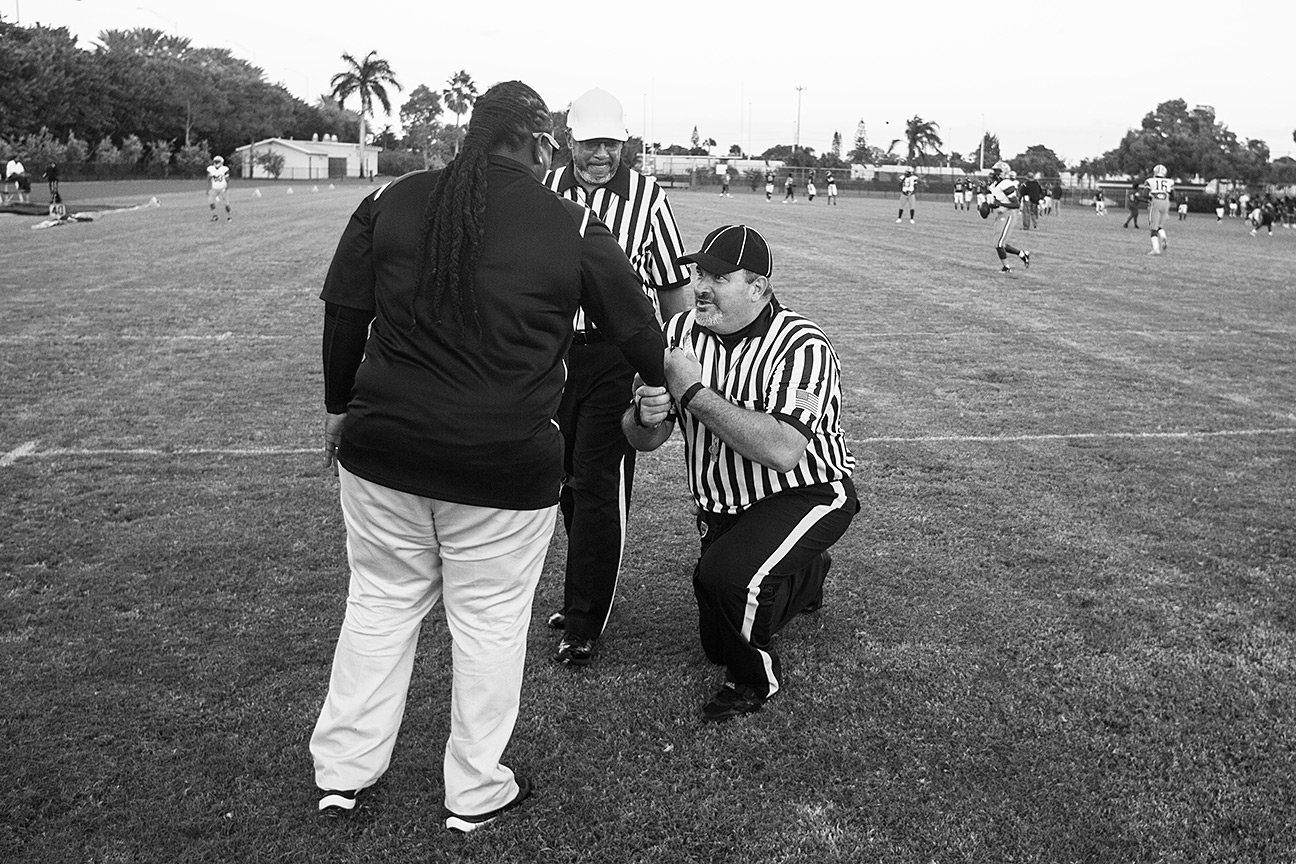 Most of Coach B's peers have been supportive of her. Before her team's game against Stranahan, referee Teddy Brown drops to his knee and held her hand while saying, "It's an honor, Coach, your reputation precedes you." When later asked about his actions, he explained simply, "I love to see a woman dominate in a man's world." 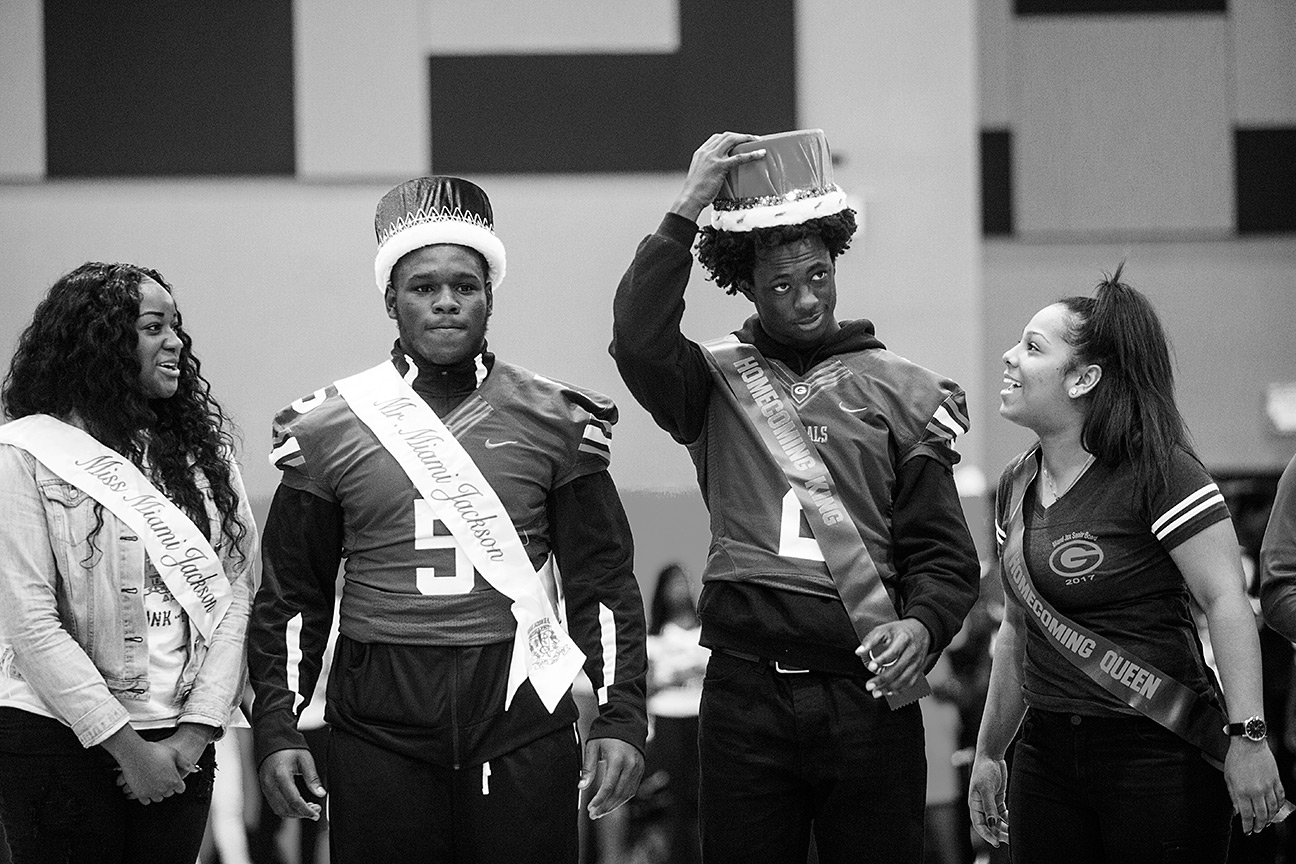 "All year we've been through a lot and now I finally feel like these kids are coming together. It's late in the game, but you finally feel some kind of ownership that the kids are having, and they're enjoying themselves," Coach B said. Defensive tackle Renaldo Flowers Jr., center left, and running back Nakia Robinson, both seniors, are named to the homecoming court during a pep rally before their game against Coconut Creek. 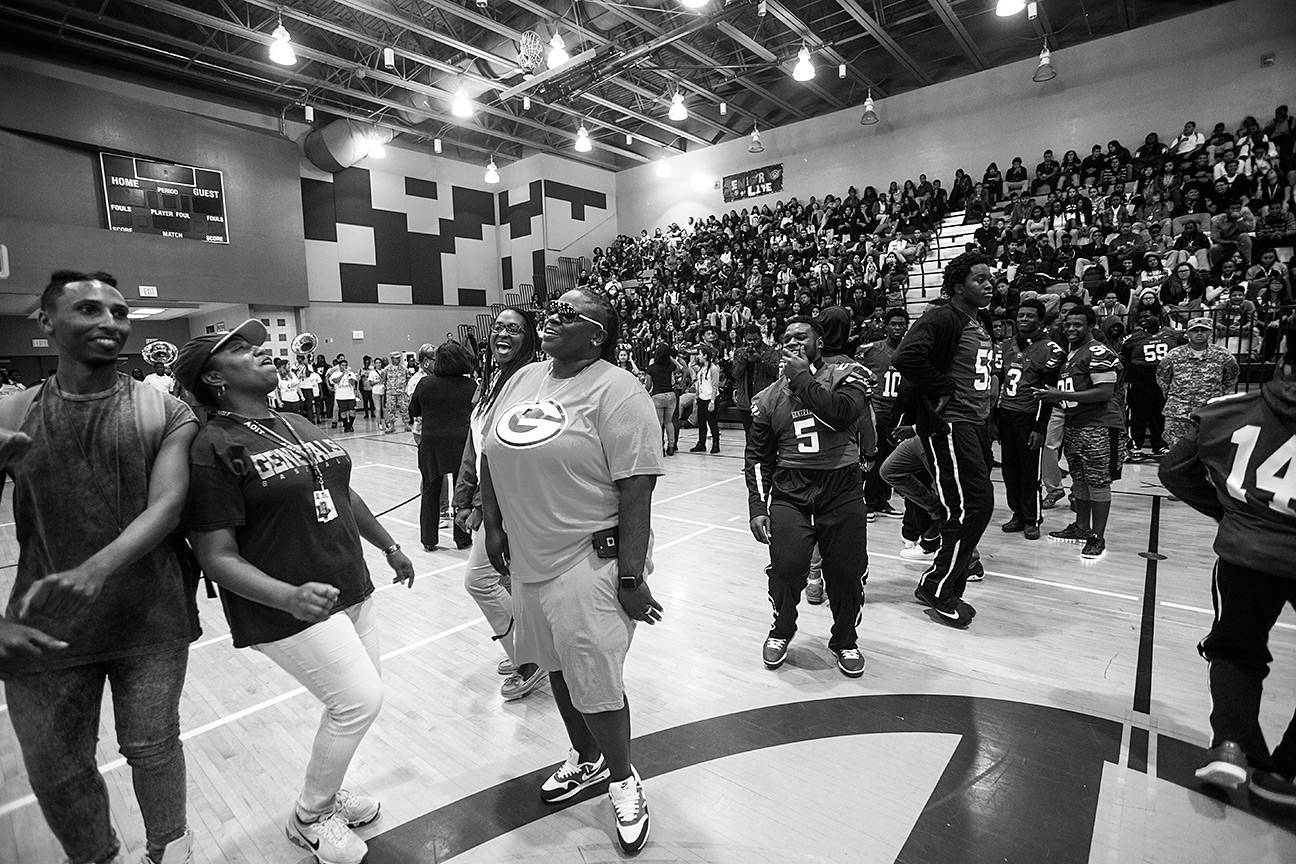 Coach B shows off her relaxed side during the homecoming rally as she dances with her cousin Lakeysha Broussard, a math and business teacher at Miami Jackson. "Right now I feel like we're at a good point and I want to go out with a bang this season," Coach B said. 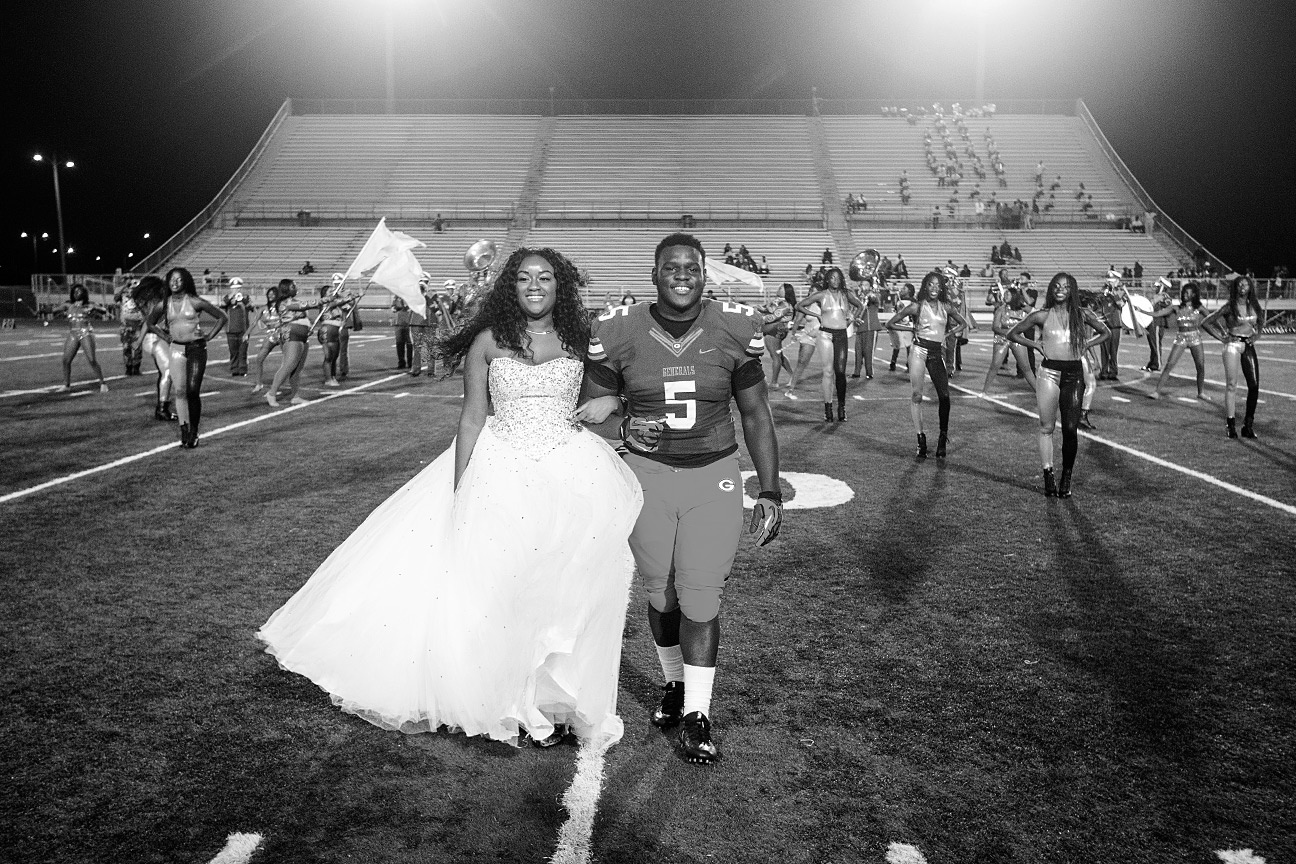 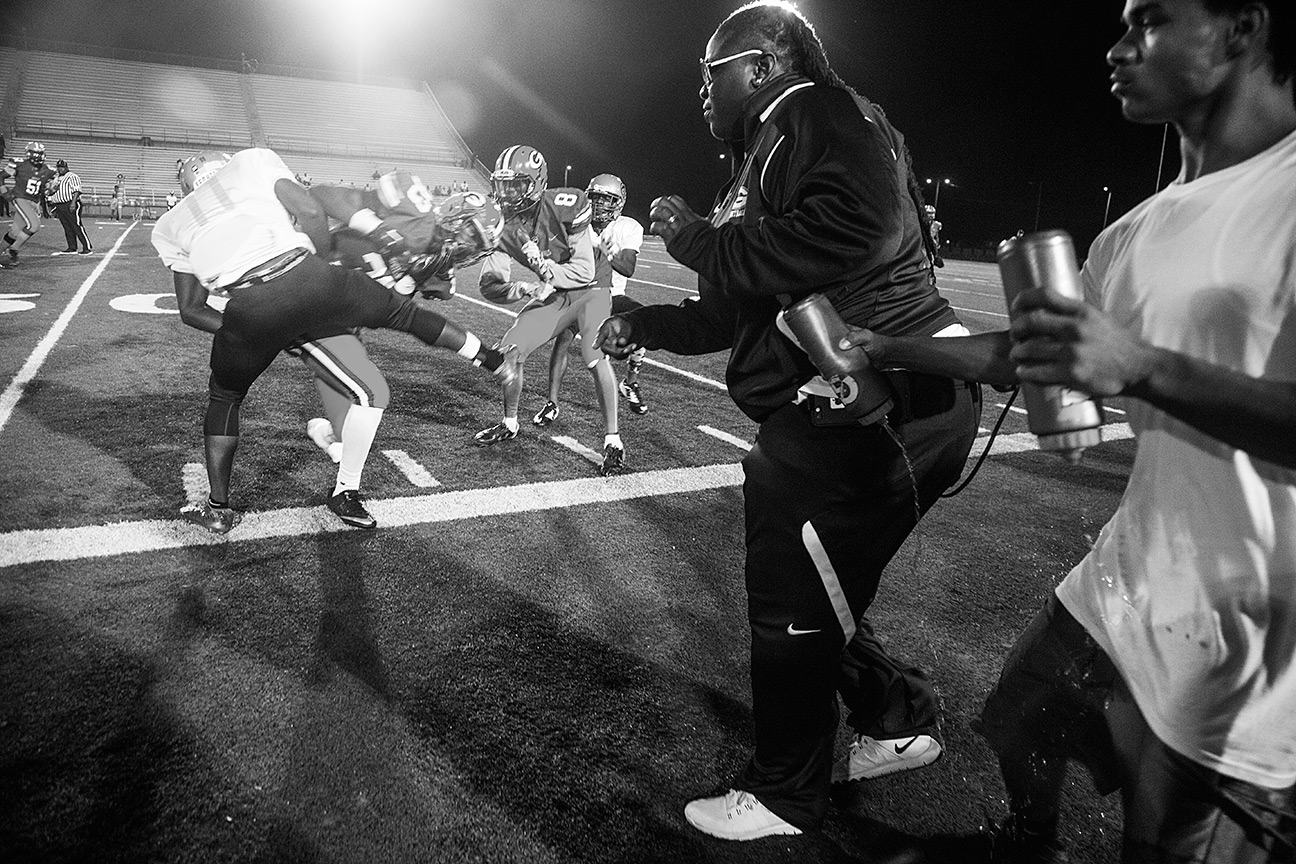 "A lot of young men in our program don't have fathers in their lives, so oddly enough she does bridge that gap between a boy becoming a man," linebacker coach Quan Chess says. "I think they have learned a lot about respecting women. When you look at other programs, they're not as sensitive as we are towards women. We don't have the same problems as other programs, and I think Coach B has a lot to do with that." Miami Jackson had no problems handling Coconut Creek and ultimately won their homecoming game in a 43-0 rout. 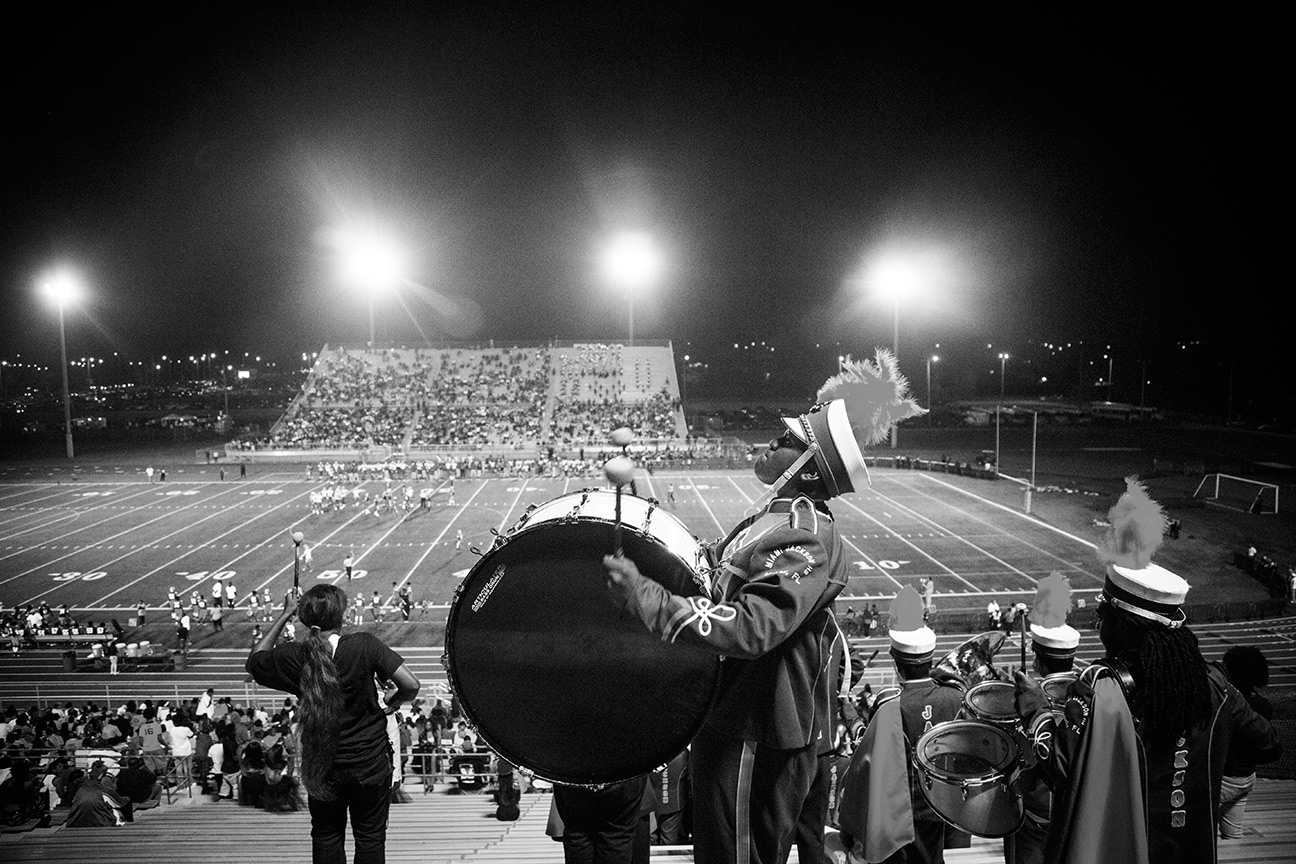 Drummer Arthoner Shine and the Miami Jackson marching band try to hype up the crowd during the team's final game of the season against Miami Northwestern. 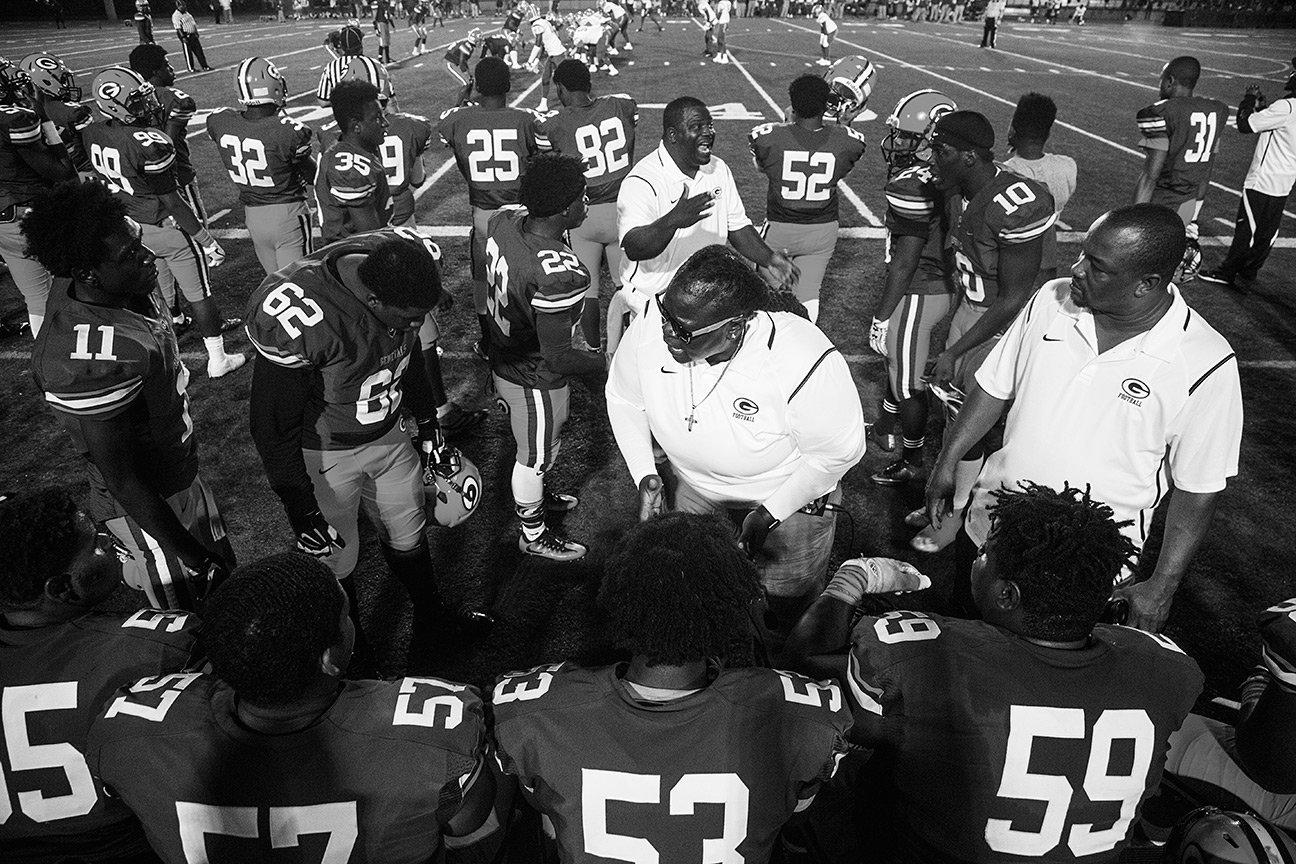 Coach B, quarterback coach Tywane Stevens and running back coach Fitzgerald Hardwick try to keep the team focused in its last game of 2016. Coach B says lessons in understanding the opposite sex have gone both ways during the football season. "I never knew these guys were so emotional. They're like emotional creatures," she says. "Most men won't think about it because they're told they've got to be tough. You've got to watch what you say to them, around them, about them." 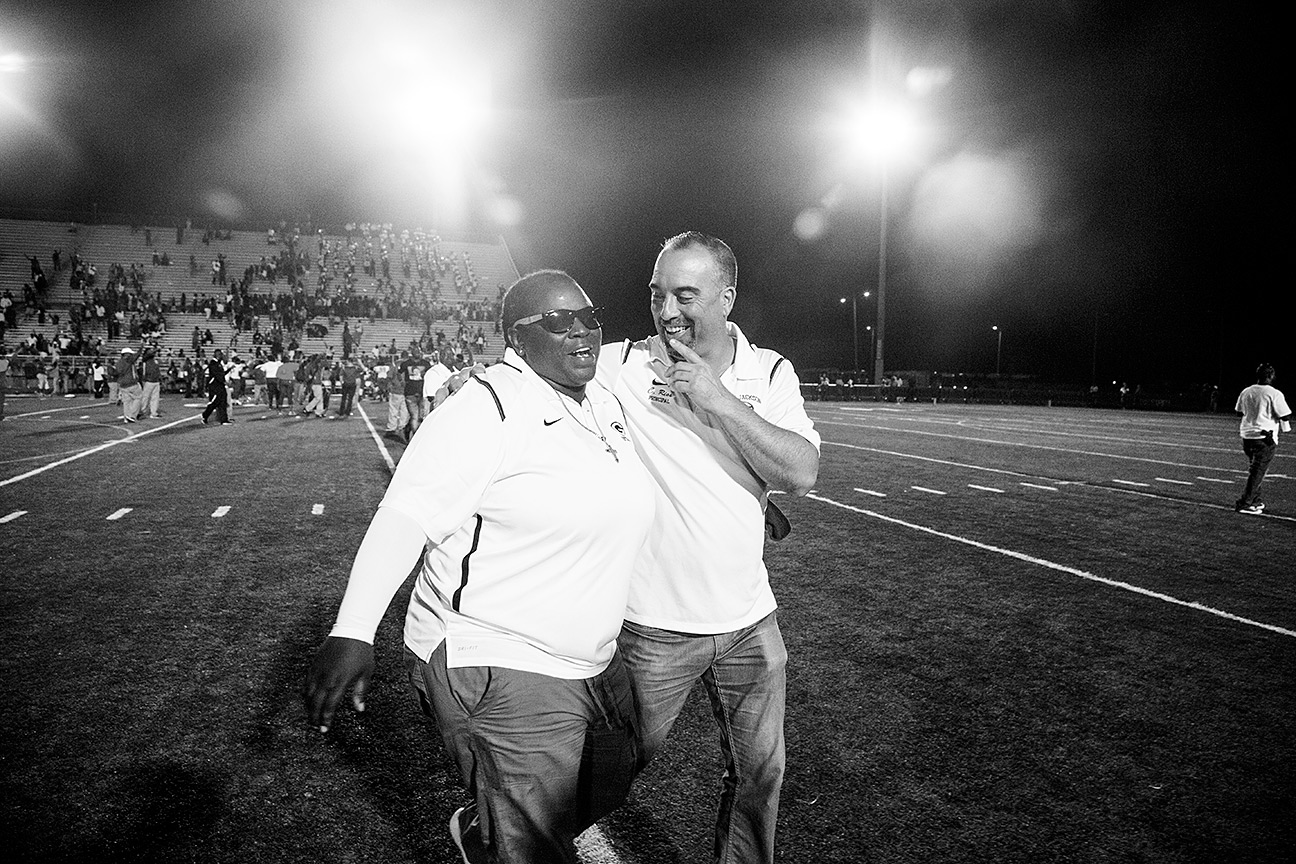 Though the Generals lost their final game to Miami Northwestern 18-6, Coach B still has a lot to smile about as she walks of the field with Miami Jackson principal Carlos Rios. With her first season complete, she's proud but also knows there's much she can improve upon. "I'm trying to learn everything that I can," she said. "I'm a sponge. I watch everything. If I don't know how to do something, I'm gonna learn it. I would love to build this program from the ground, you know and let it be all mine, let it have my identity." 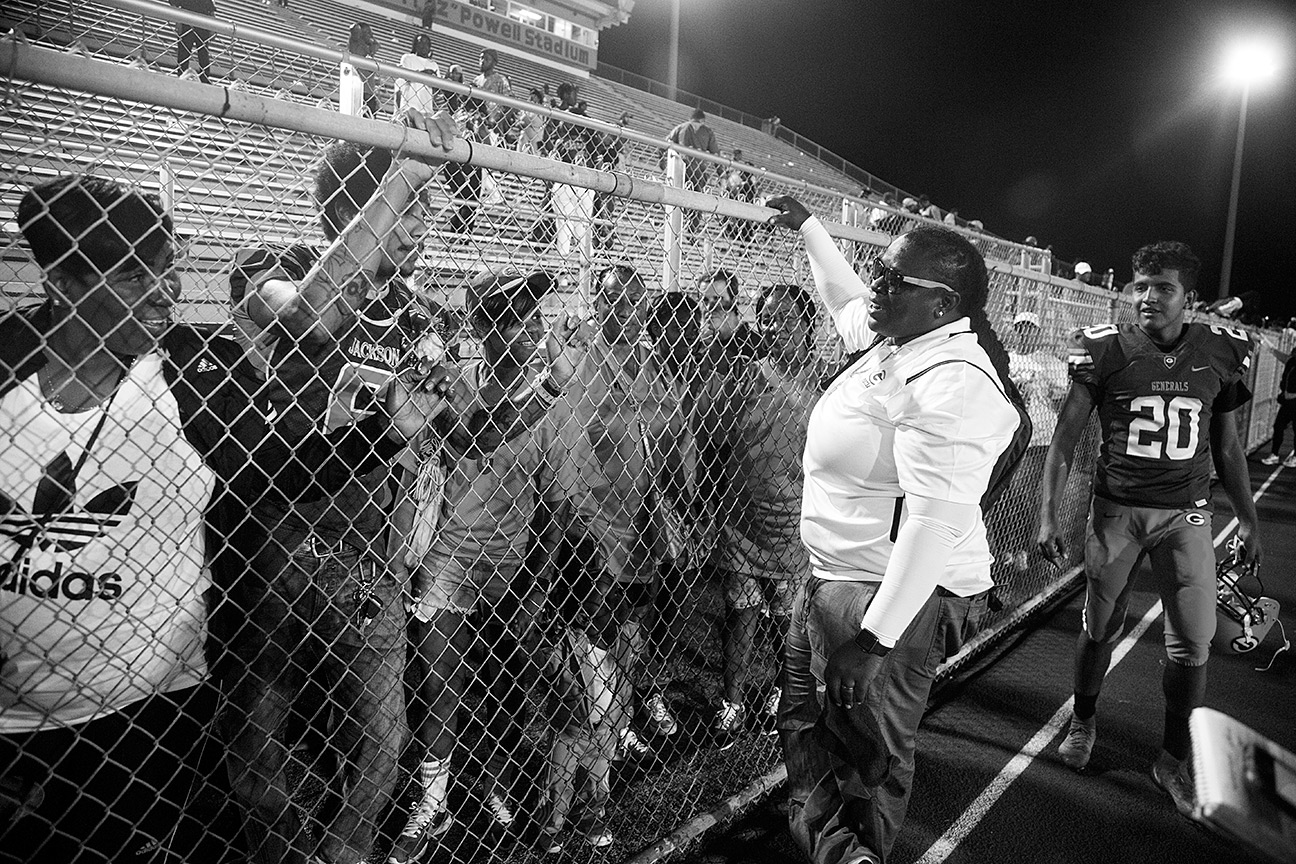 Coach B is met by her family, including her mom, cousins and aunts, after the final game of the season. "A lot of people were making fun of Jackson on social media and saying, 'Jackson is going to be a joke this year,' but we just had to come out and play," offensive guard Jacob Cato says. 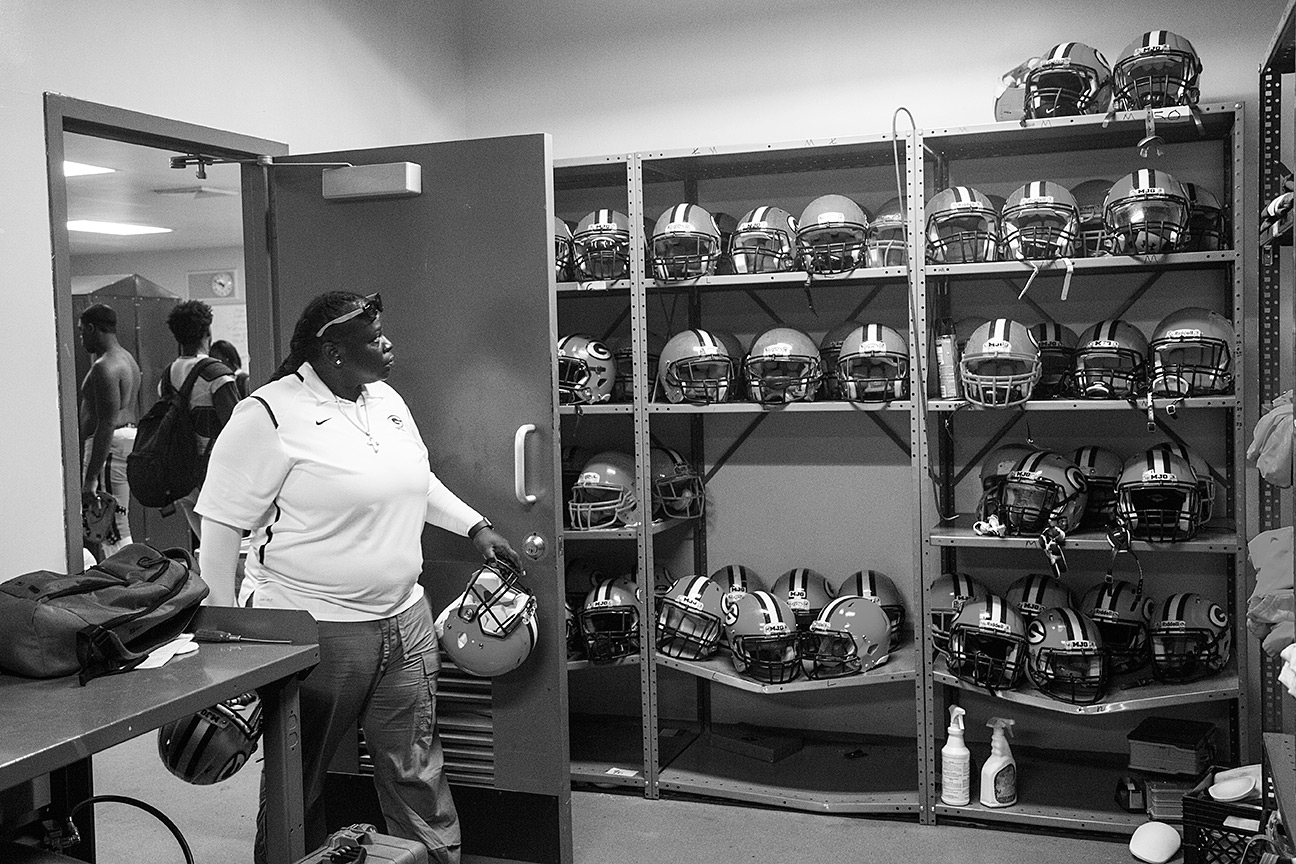 After the final game, Coach B collects helmets from her players and puts them away in the uniform room. While she has enjoyed the season, she reflects that she has had some difficulty finding time for herself. "They call me on a weekend like I'm their wife or something," she joked. "I try to spend time with them, because a lot of them outside of that, they don't have nobody to spend time with them." 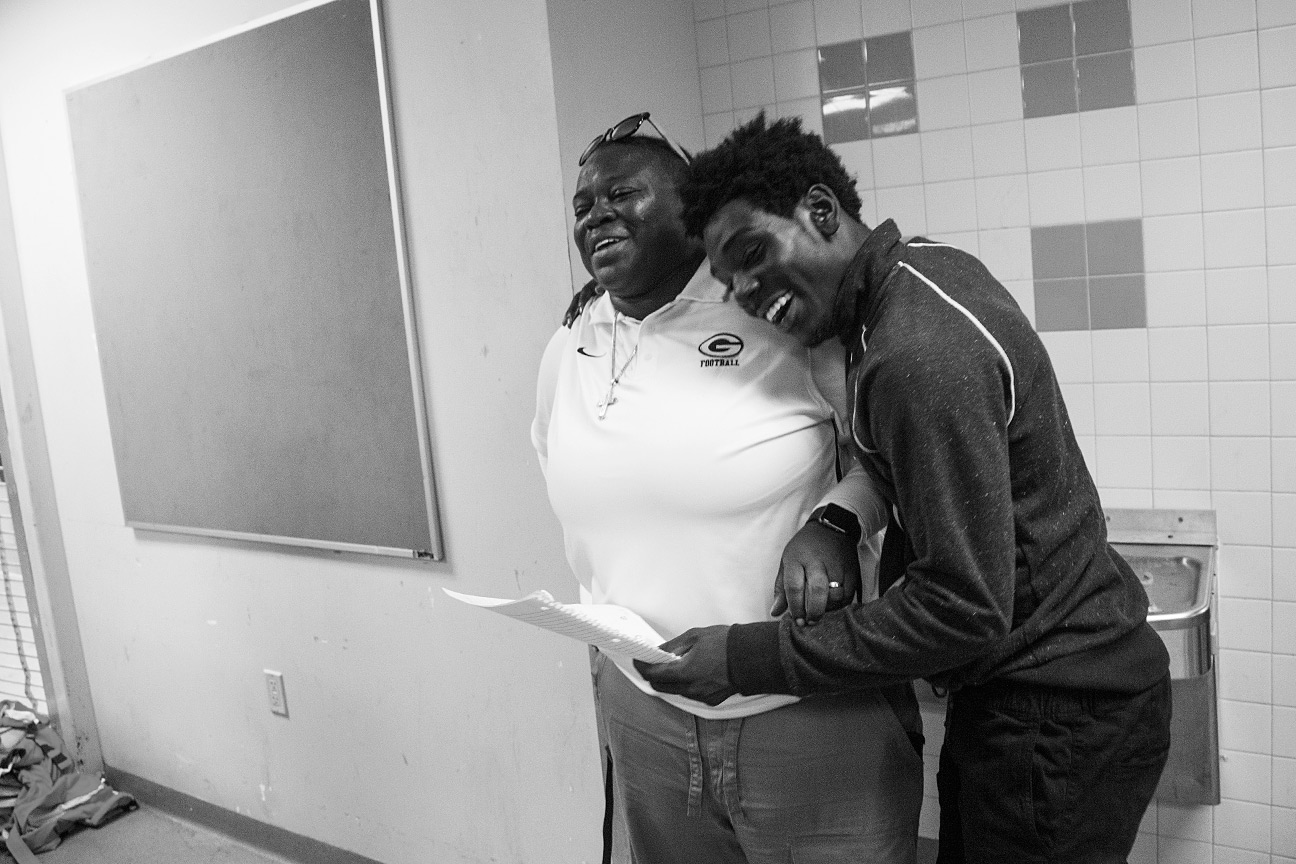 Wide receiver Seven Fleurimond hugs Coach B in the locker room after the season's last game. "Coaching to the end, coaching these kids up, and being there and fighting with them, that's more than enough for me," she says.